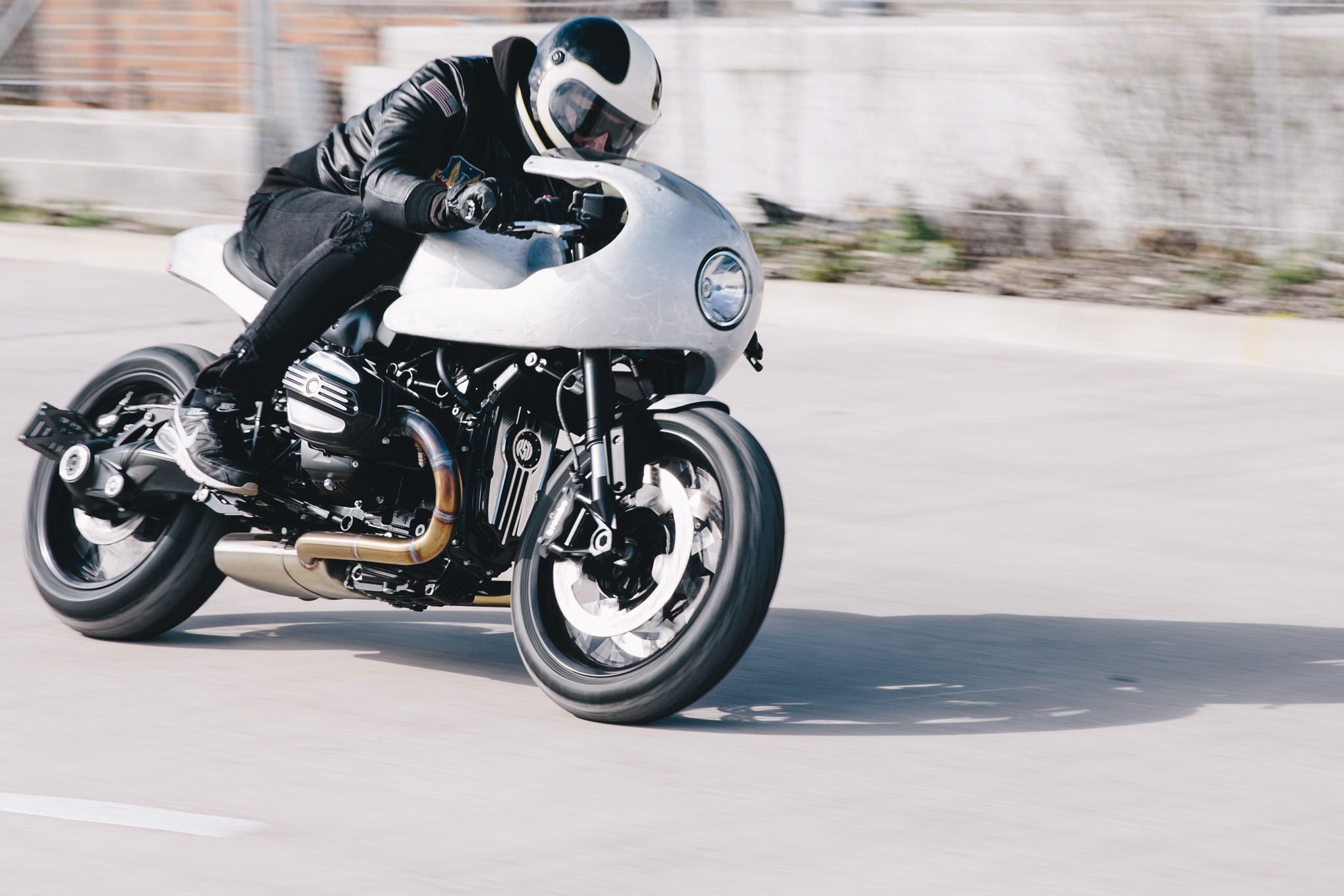 6 weeks in a wheel chair and 3 months being out of action gave Stuart plenty of time to mull over his next bike project, after a tourist ran a red light trashing both Stuart and his precious Triumph Thruxton. The result of this mulling around would be a brand new BMW R nineT turning up to Gasoline Motor Co. and the birth of ‘2shot’. 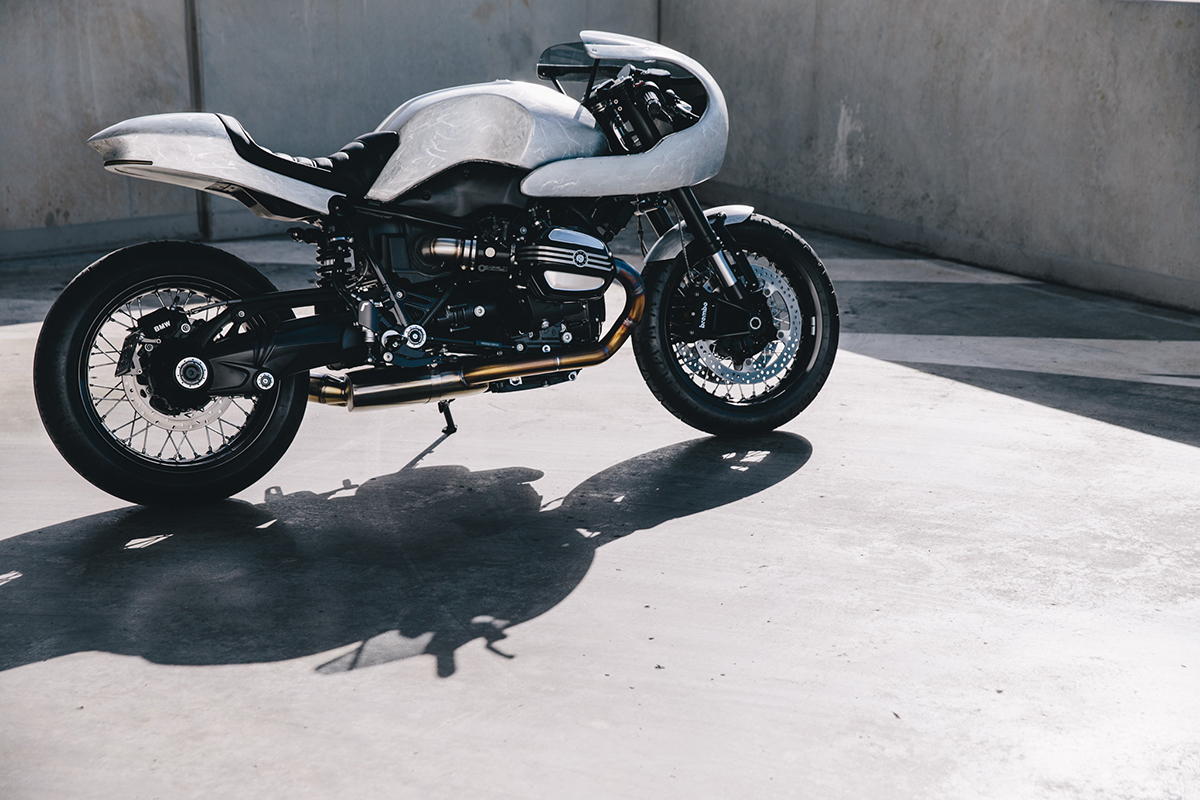 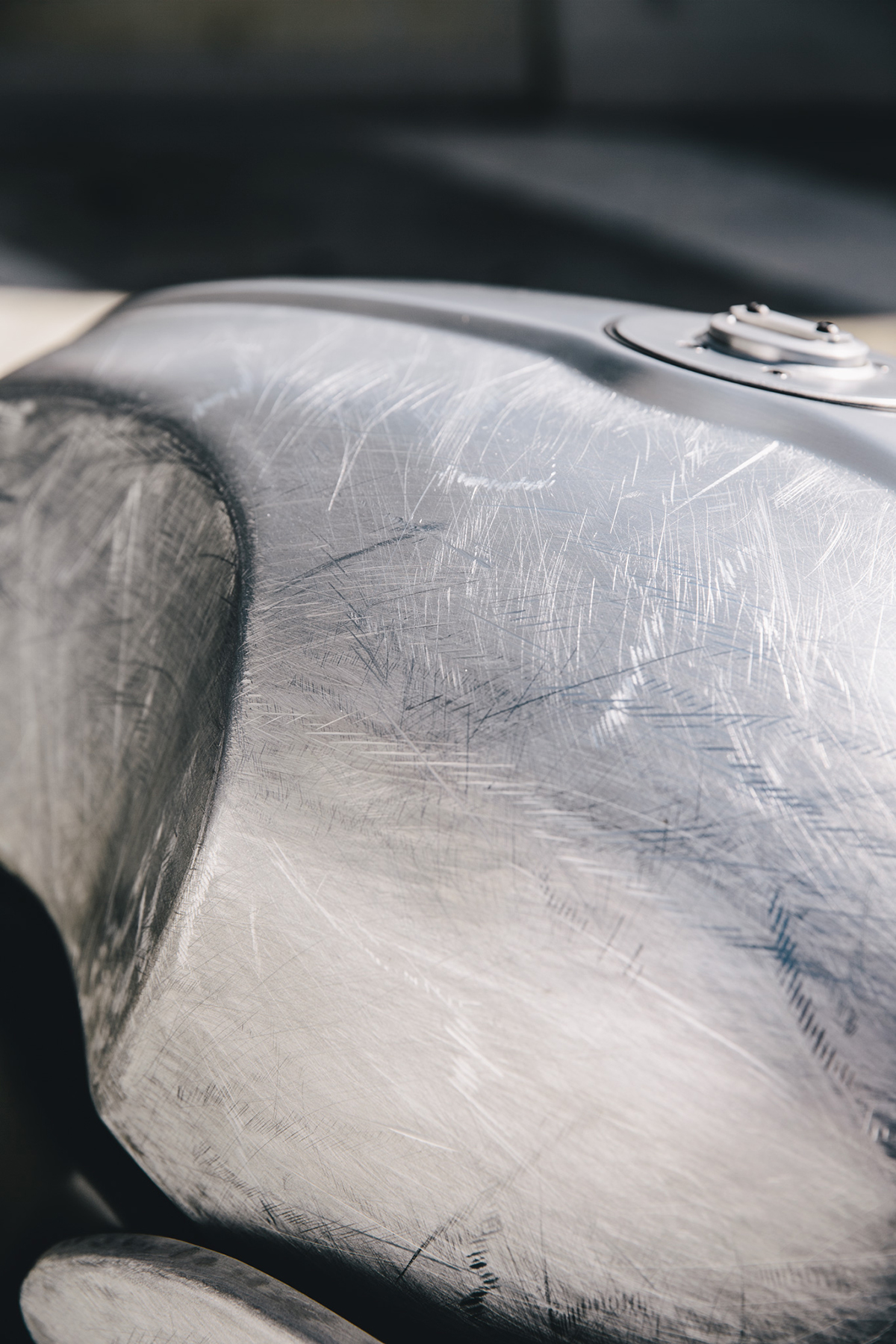 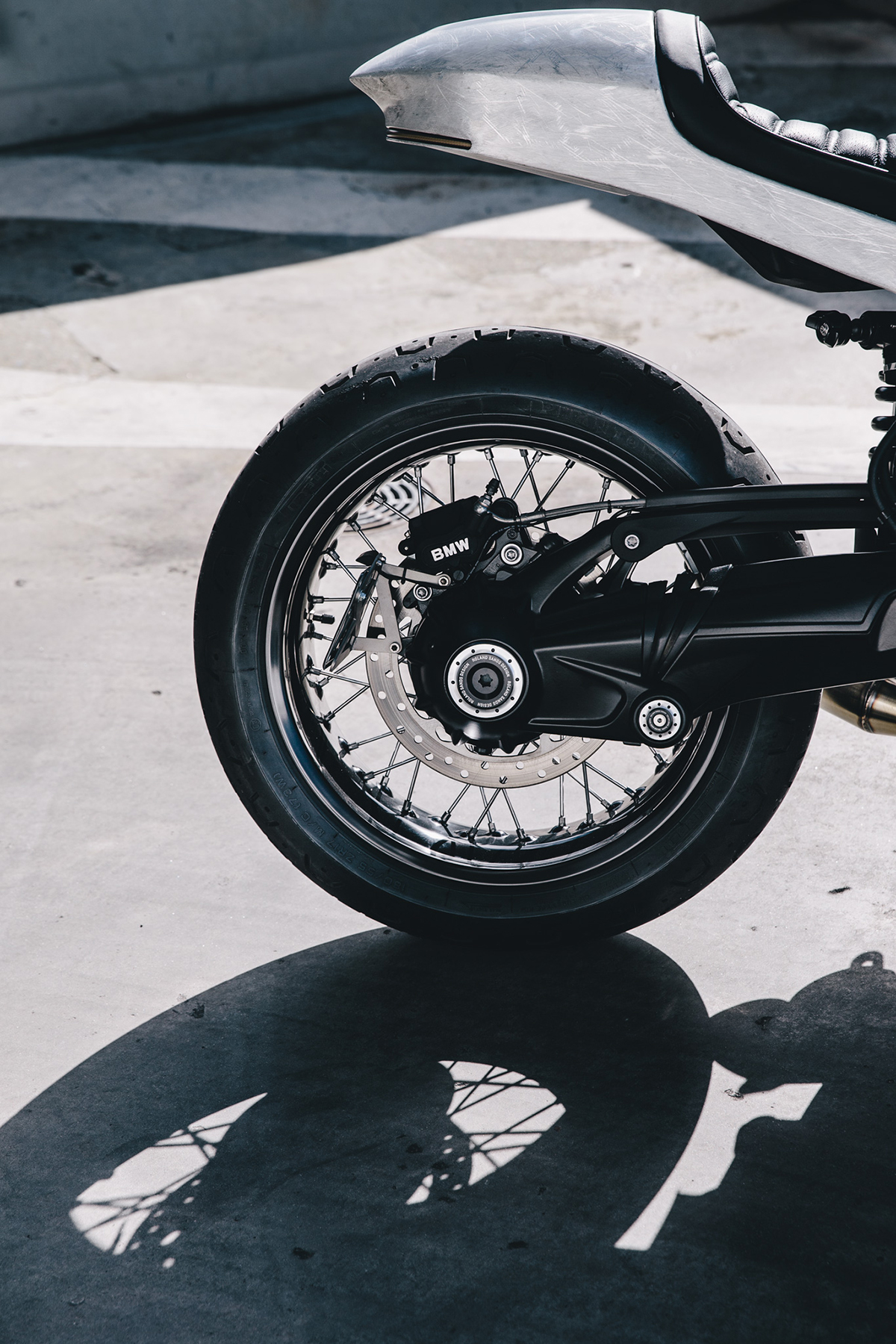 Stuart had been scraping Harleys around the hairpin corners and mountain passes of Switzerland for years before making the move to Sydney. It would be here in his new sunburnt home that he could really focus and enjoy his riding. “ I kicked off with a Triumph Thruxton Ace which I had kitted out with the guys at Gasoline, she looked killer. That was until a tourist thought a red light meant ‘Go!’ and ran straight through me in the CBD. So it was back to the drawing board! I had a lot of time to think over this build, firstly I had to buy another motorcycle whilst I couldn’t walk – the irony was too much and it had to be done! So a spanking new BMW R nineT was bought and delivered unannounced to Gasoline to kick off the excitement. They already knew this build wasn’t going to be a normal one. The R nineT was my second shot at the perfect motorcycle – hence 2shot.” 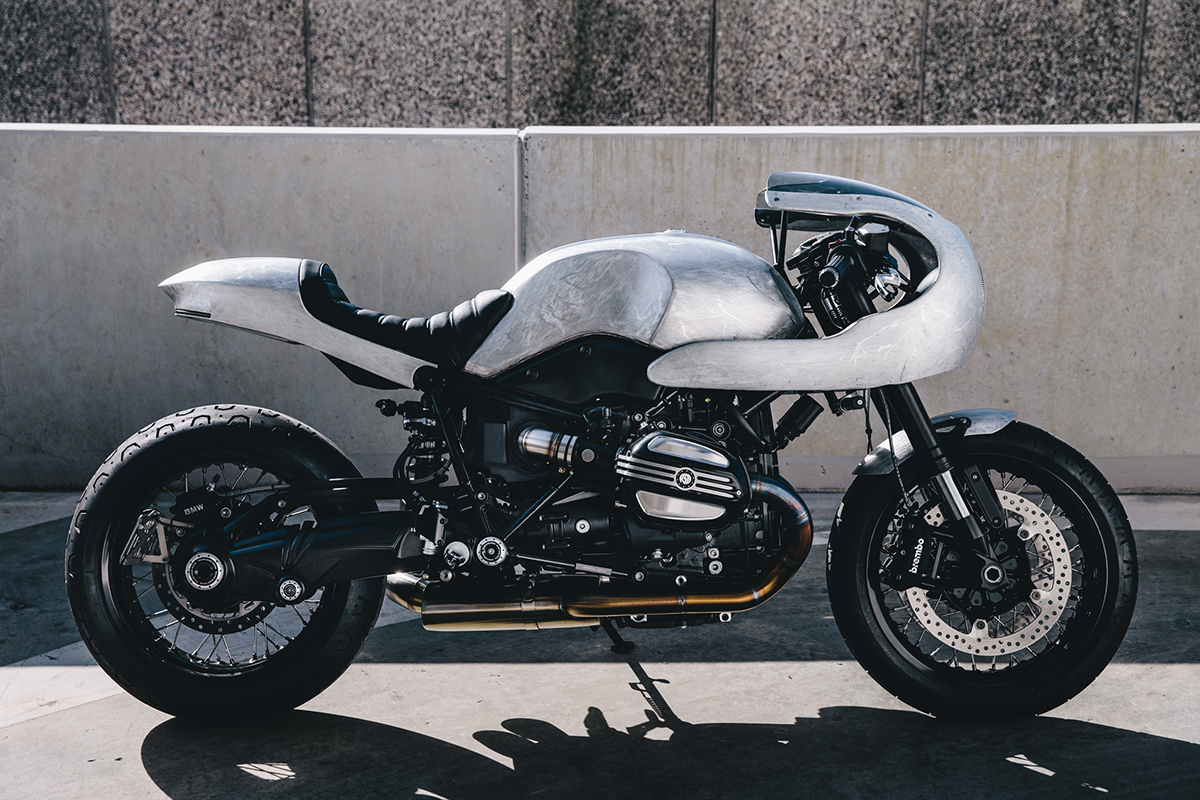 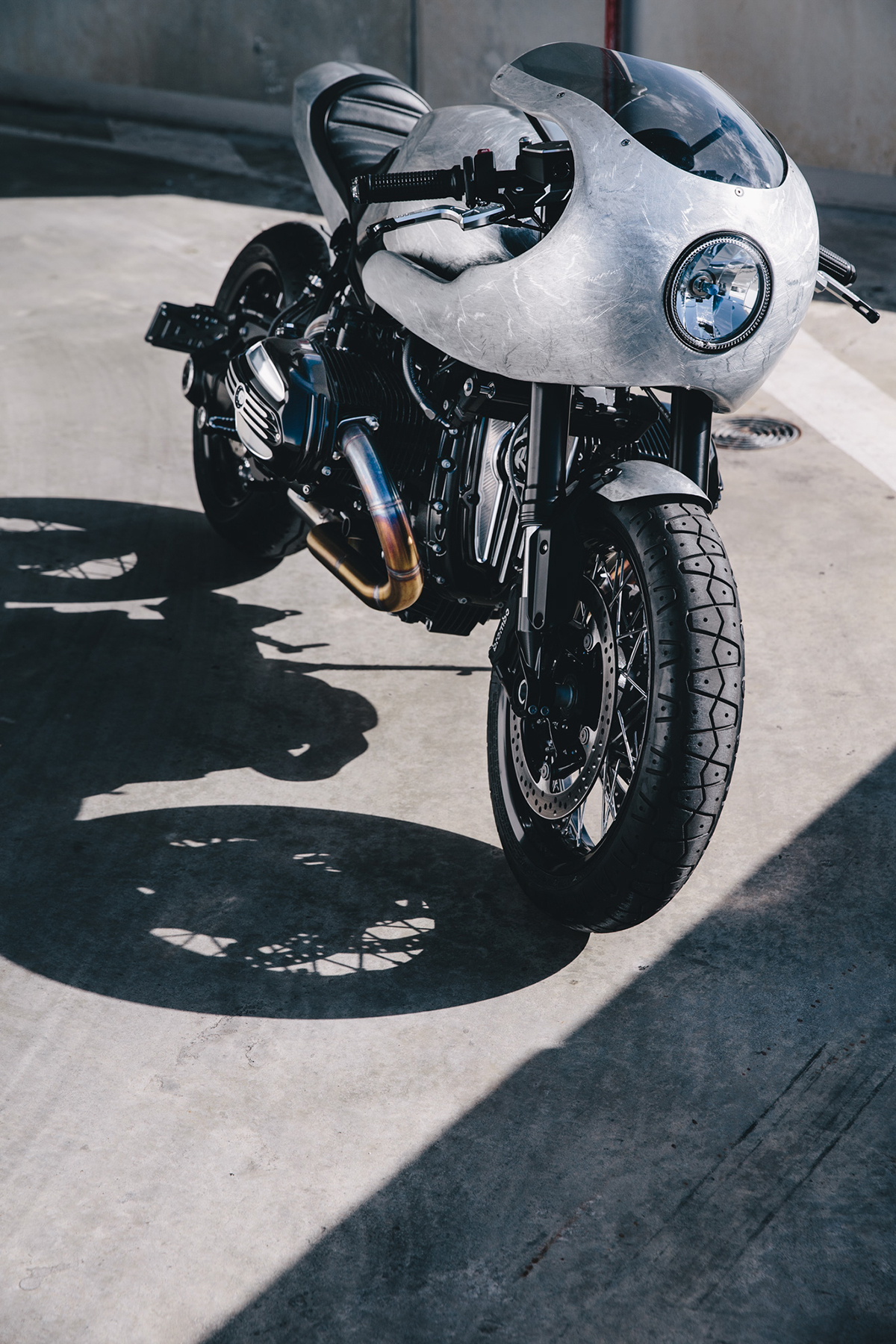 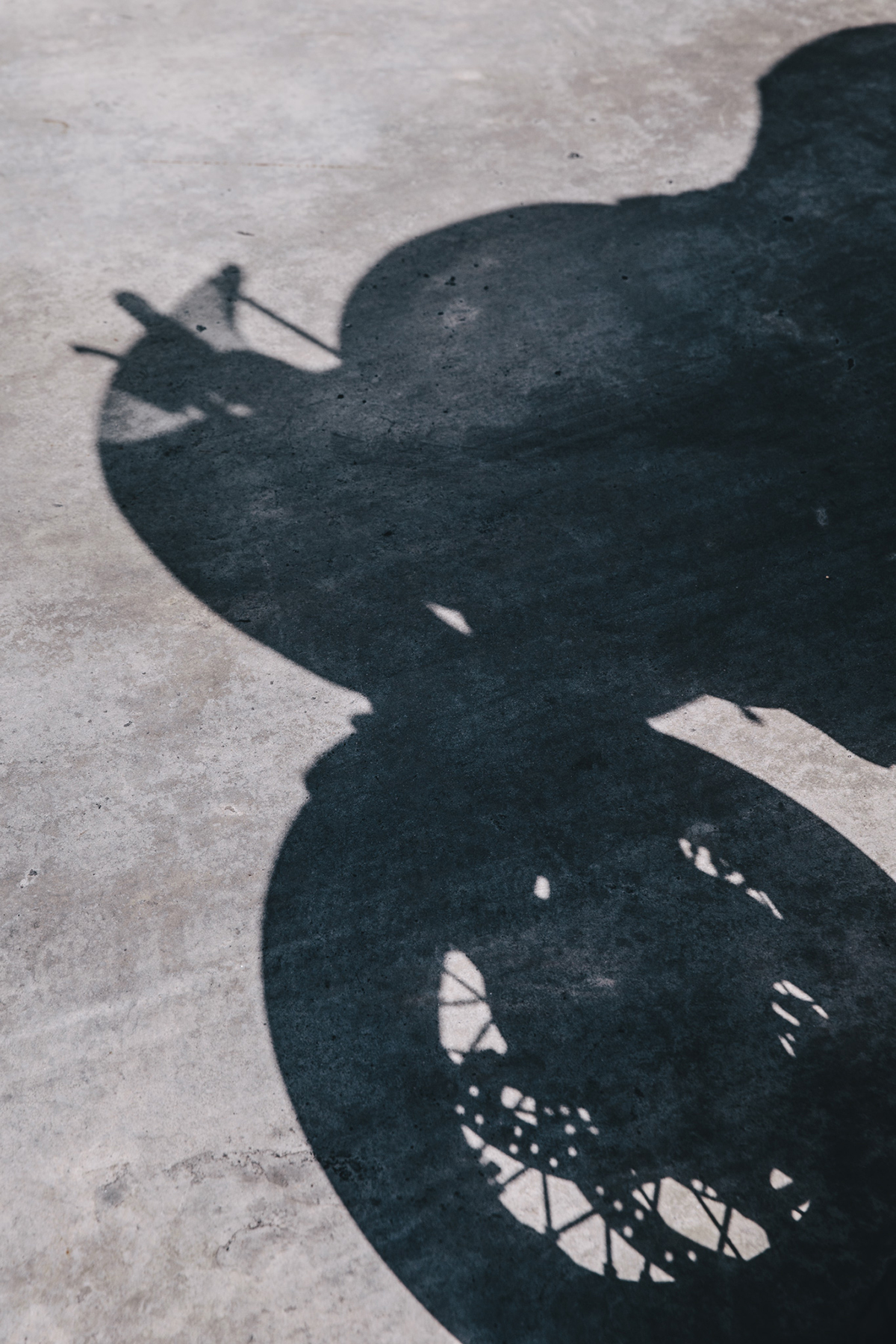 The initial inspiration for this build would come from a recovery perspective, with Stuart having a goal whilst his body was on the mend. It was also a great excuse to spend time with Jason and Sean at Gasoline, with countless hours drinking beer and bouncing ideas off each other for the build. “It’s been these sessions where key decisions have been made and also knocked back. I also bizarrely wanted a difficult and lengthy build process. I figured a tricky path is often avoided, but would yield a more unique one off result.” 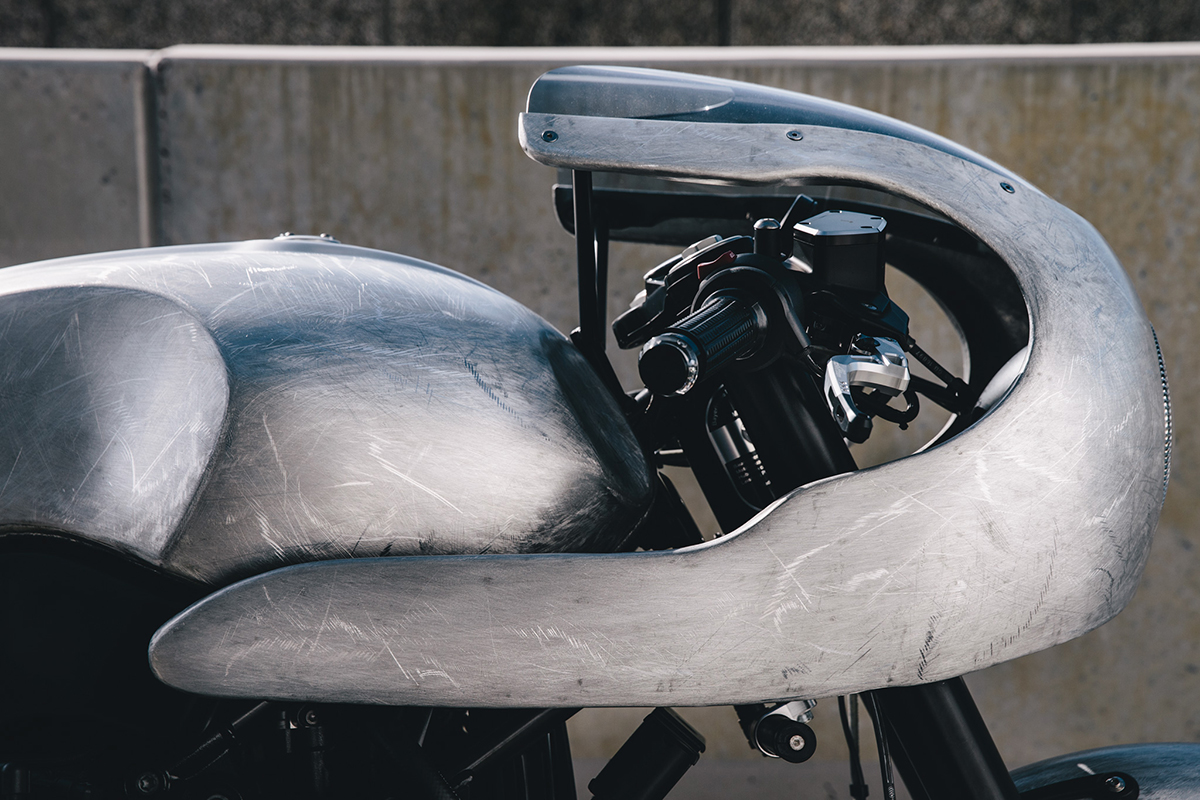 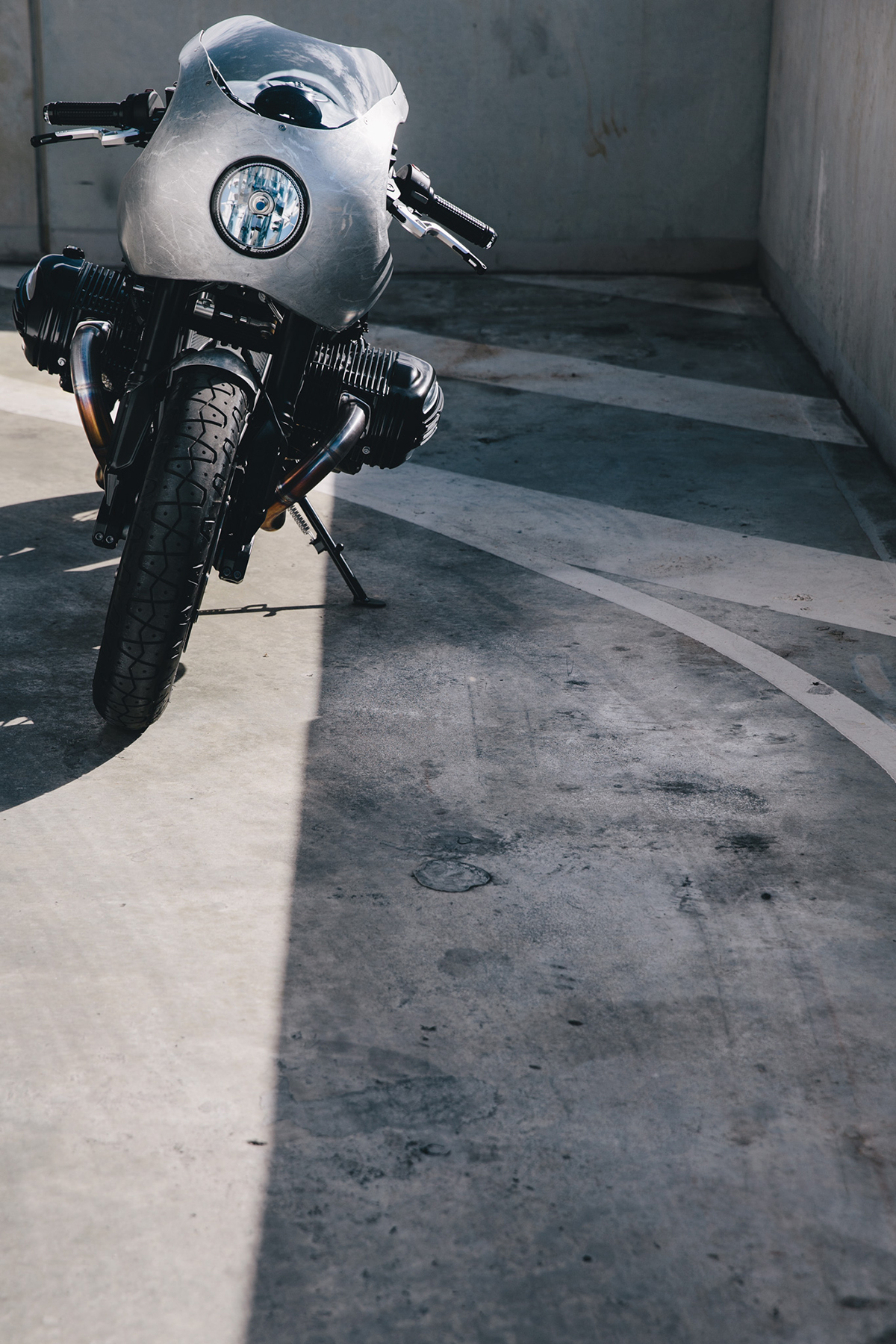 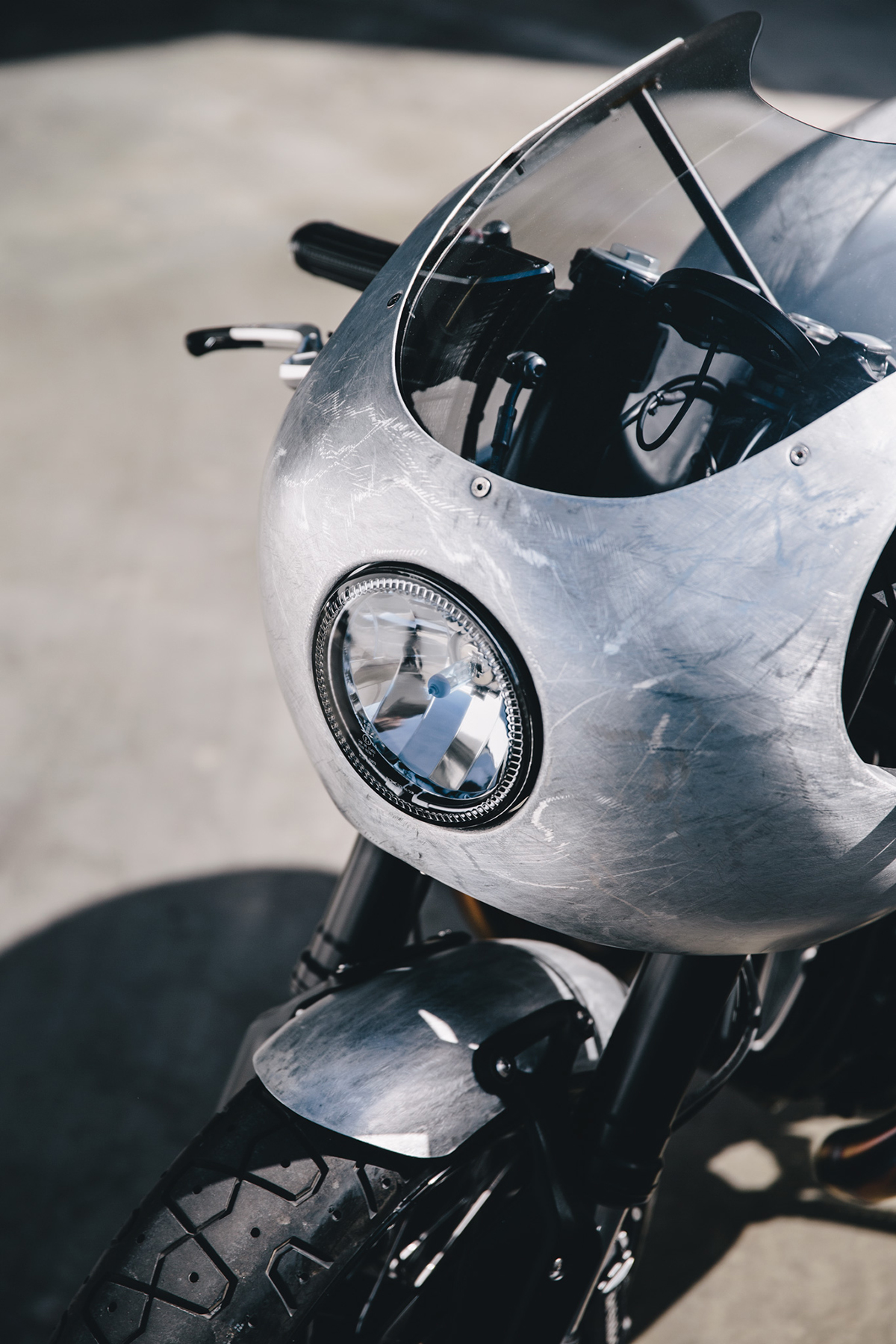 The bike would receive an extra dose of tech with a keyless system added, new gauges and LEDs. The bike would then be reverse engineered at Gasoline, with the body being stripped down and beaten back a few decades to be rebuilt with more retro styling and methods from Motorretro to be added to compliment the more modern changes applied by Gasoline. 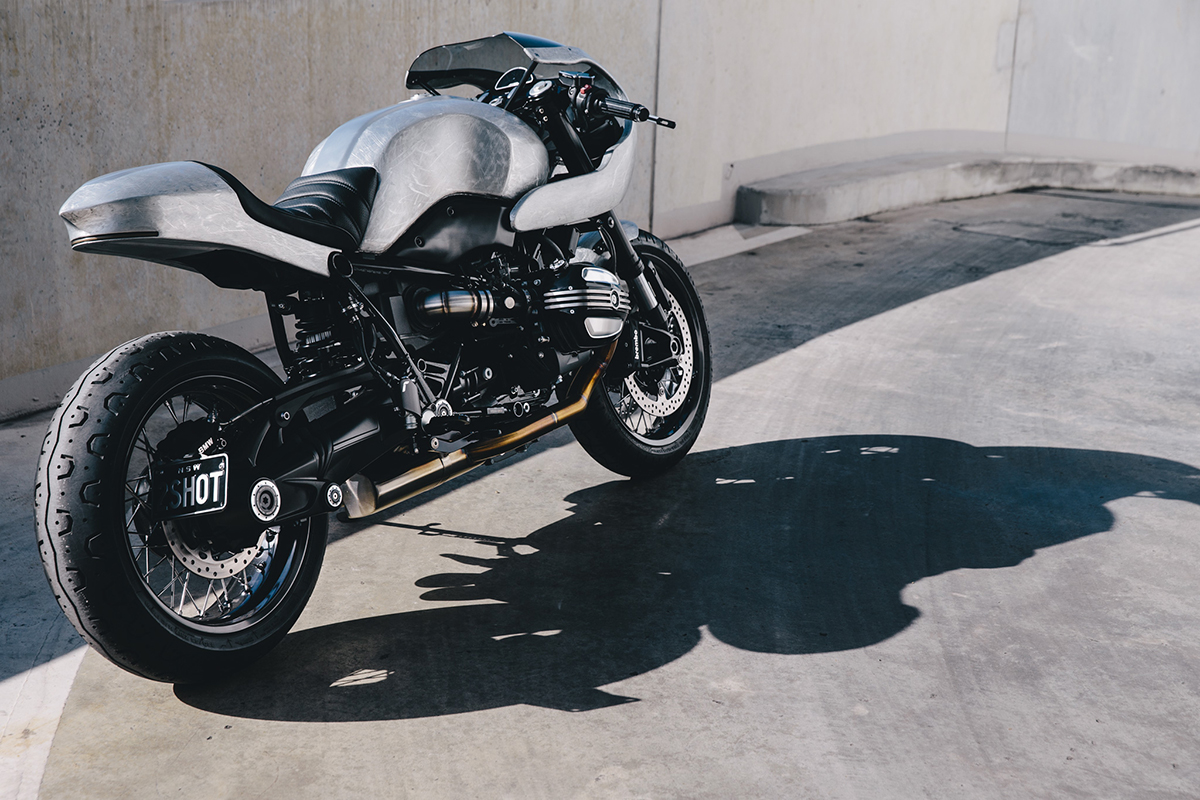 It would take many minds and hands to get this bike to fulfil its destiny, and so the experts at Motorretro were called upon to add some hand-made finesse to the bike. After chatting to Jason from Gasoline on the phone, Georgio & Vaughan from Motorretro headed over to meet Stuart and the rest of the Gasoline crew. “The guys had some good, clear design direction and inspirations from previous bikes. The bike already had a beautifully crafted exhaust system added, along with many other high-end Motogadget and RSD R nineT parts. The headlight shape and design Stuart had chosen really gave me an excellent design platform. I could begin the design work to accentuate a low, long, sleek but slightly modern design – this bike was an excellent basis for us to start with.” – Vaughan 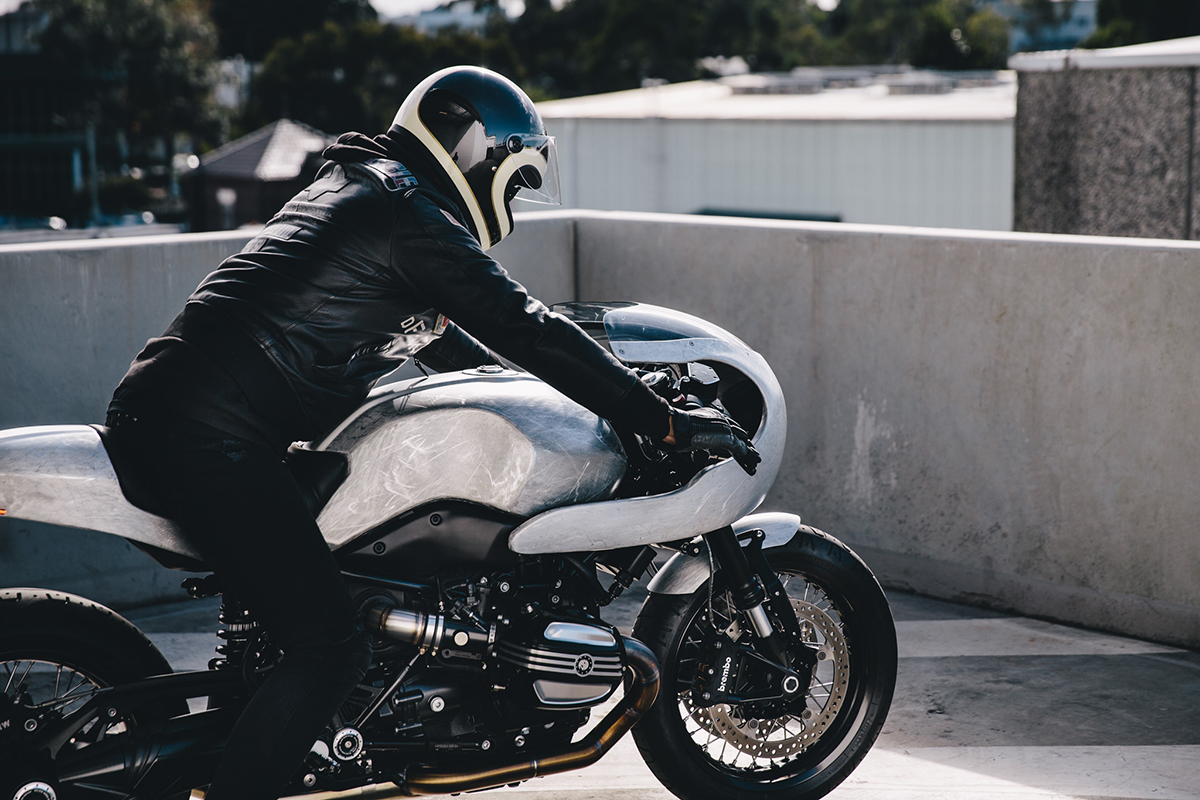 From here, Vaughan and Georgio got to work drawing two slightly different design sketches based off the previous meetings and Stuart’s portfolio of inspirations. After agreeing on one of these designs, a start and completion date would also be locked in. This bike would also prove to be the first professionally built bike the new Motorretro shop would complete – having previously built a R nineT with Deus after hours whilst Georgio and Vaughan were working as TAFE teachers. 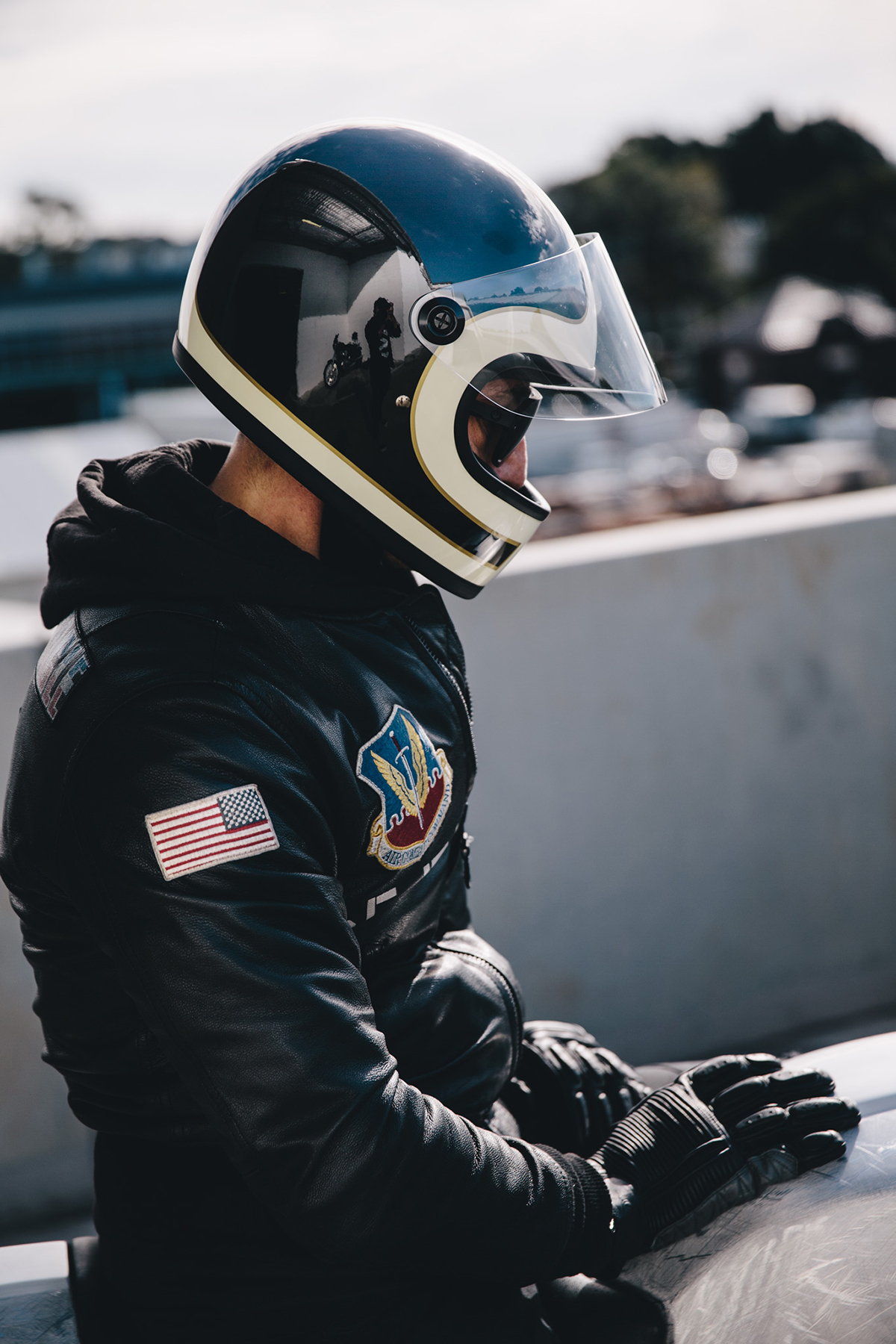 Form and function can be two separate disciplines for some custom builds, but for Motorretro; form dictates function. The bike must be able to do its job first, and then the aesthetics can be pushed. The team strived to make this a bike that is masculine with an aggressive stance whilst accentuating its elegant lines and features that were already present. “We set the position of the headlight by making the mounting brackets, and then made the wire forming buck with a screen that could be taken of and off the bike. We did the same for the rear as well, and throughout the entire process Stuart and the guys from Gasoline regularly worked with us to tweak the design until it was right.” 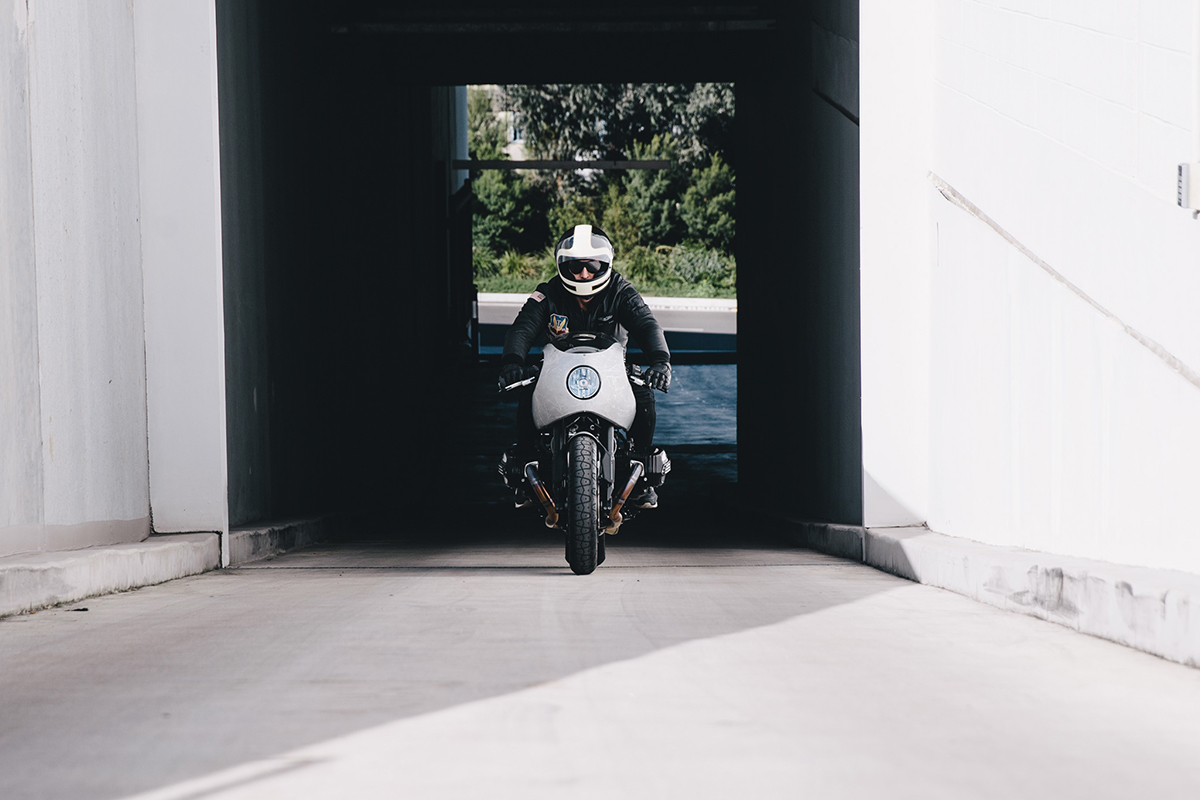 The surface finish on this bike was a very specific requirement for Stuart, wanting a very gritty industrial finish on all the parts that Motorretro made. “In fact, we suggested we drag it behind a car for a while, so we staged a shot of the take being dragged behind Georgio’s car!” It would end up being a difficult surface finish for Motorretro to do, as they generally do jobs on cars and bikes that are to be polished or have high gloss paint finish. All the surfaces on this bike were to be roughed up by a course cut file blade in random directions, adding the gritty look that Stuart was after to the sleek steel surface. 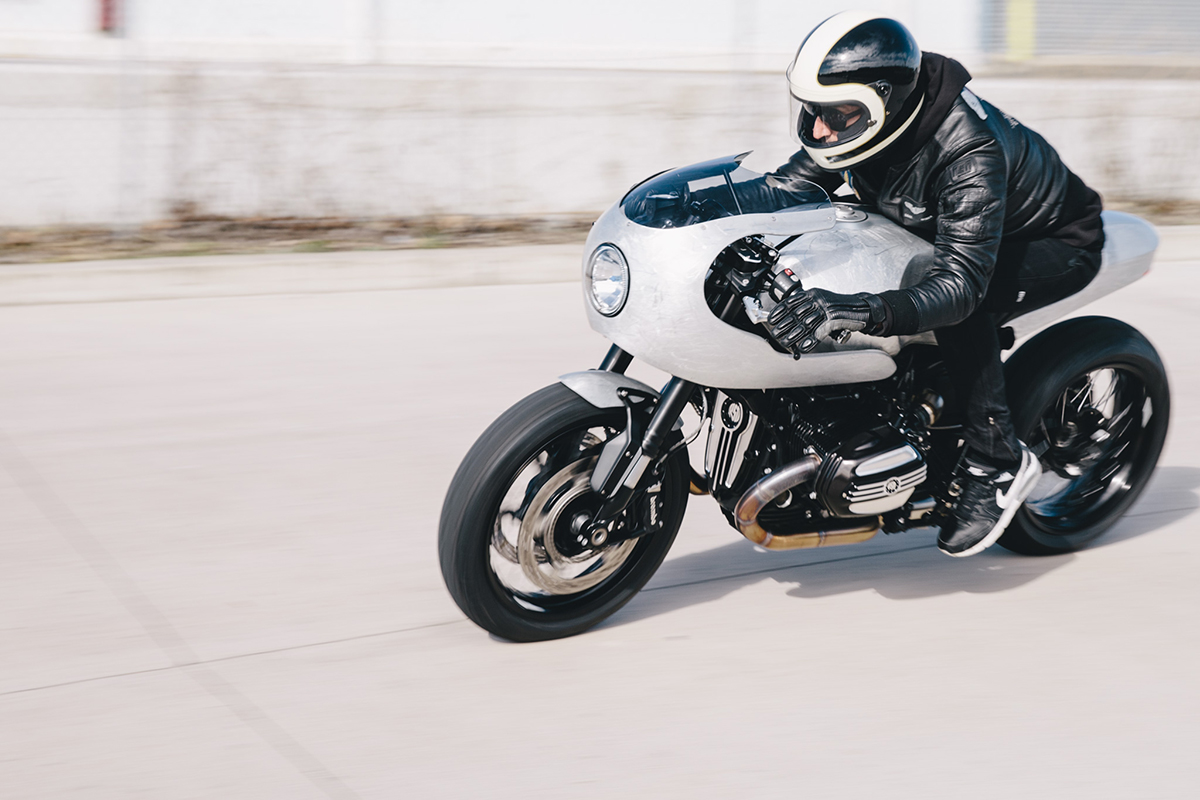 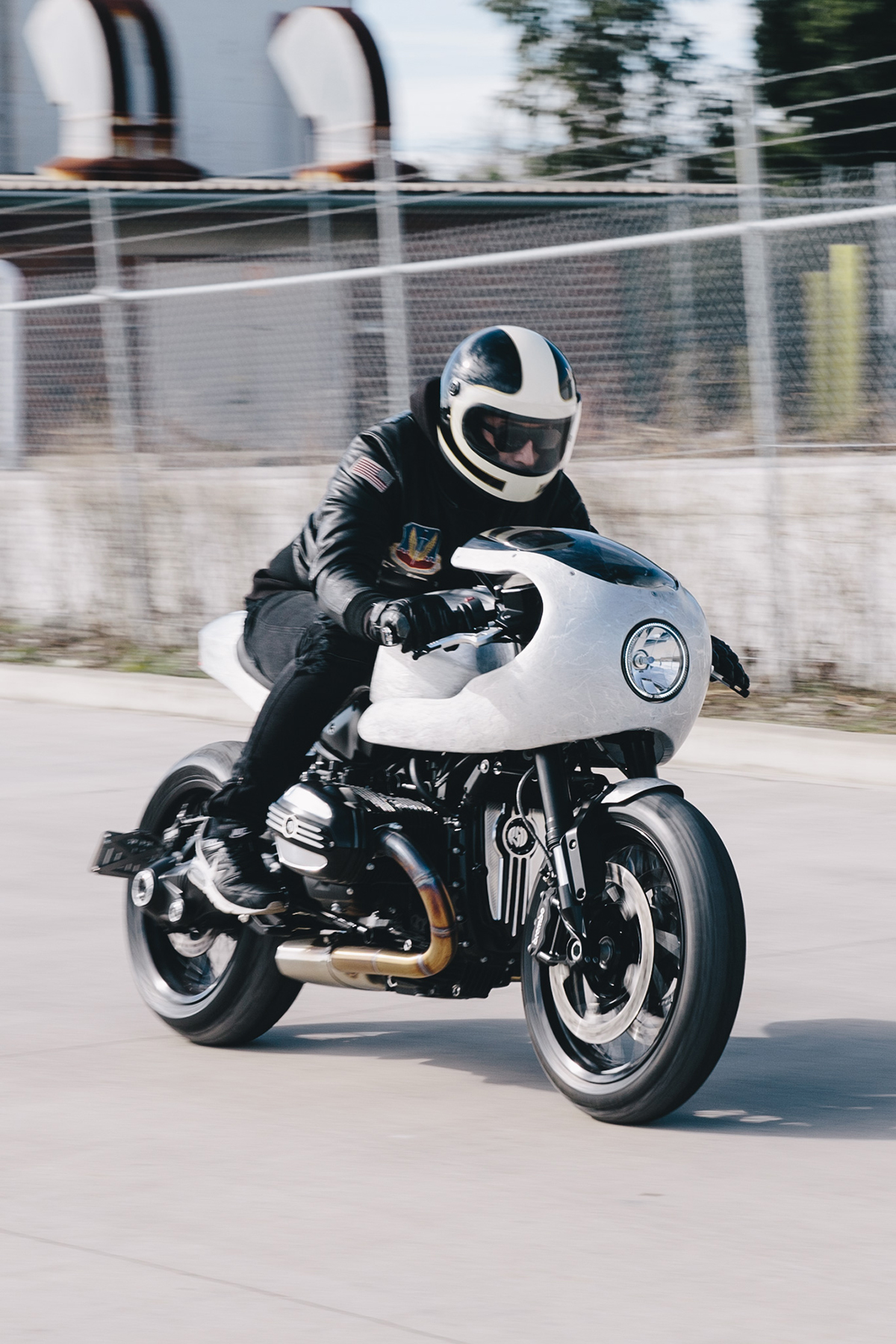 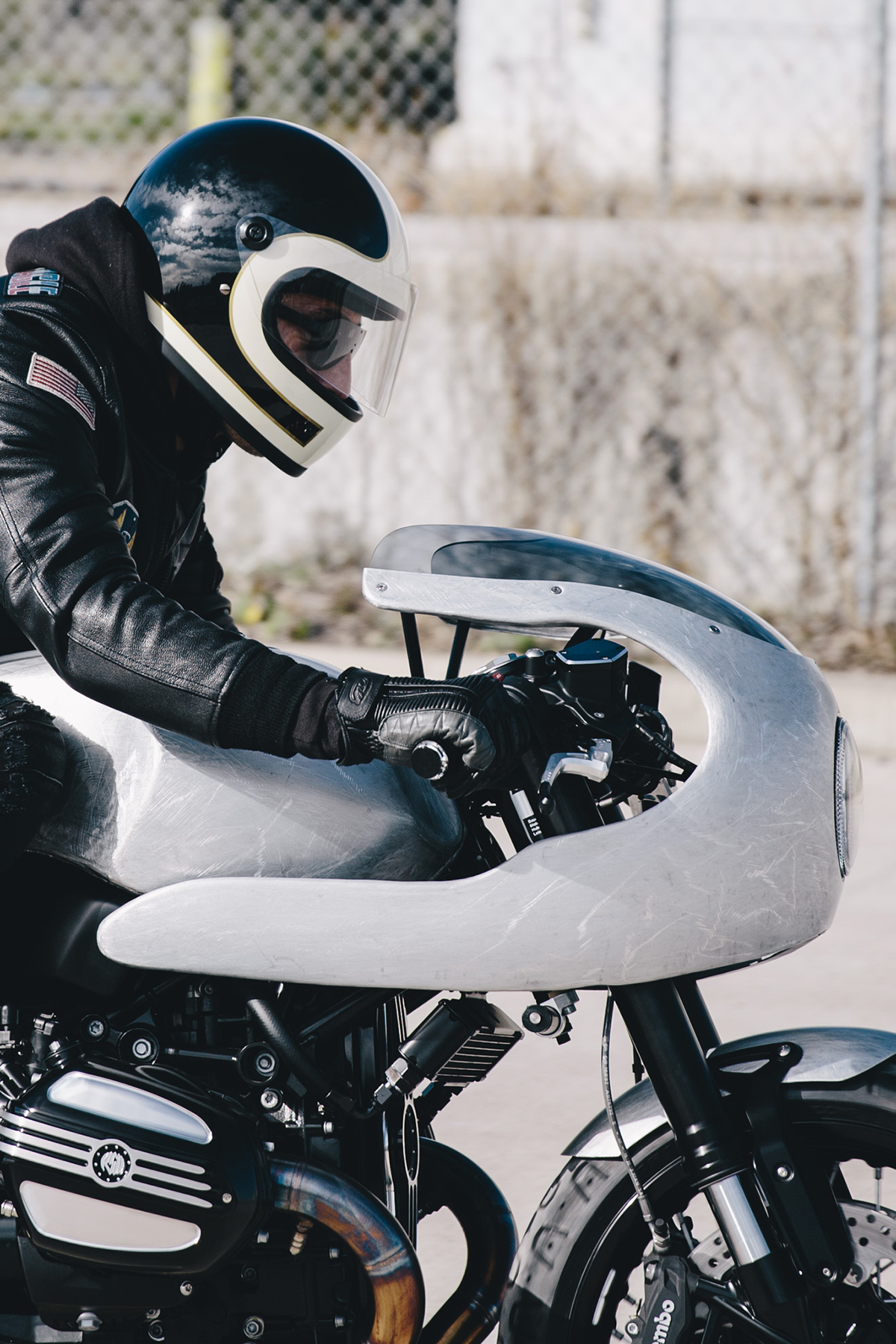 The finishing touches would now be added back over at Gasoline, including a perforated hand made black leather seat for the custom alloy seat pan. The fuel cap was designed and milled in-house at Gasoline, and a custom smoke tinted impact resistant Perspex windshield would compliment the sleek, industrial fairing. The final product is a masterwork. It’s an amalgamation of skill, creativity and passion from many minds and many hands. A shining example of the work achievable from both Gasoline Motor Co. and Motorretro – and proof that Stuart can come up with some good ideas whilst sitting on his arse for so long. “It’s a bike that fits me like a glove. It’s so balanced; the flat twin looks huge and a bit menacing but is very easy to ride. It’s real light and flickable, like an Uzi. Just point and spray! And you’ve gotta it hear it! It’s like a hibernating bear you don’t want to get too close to!” 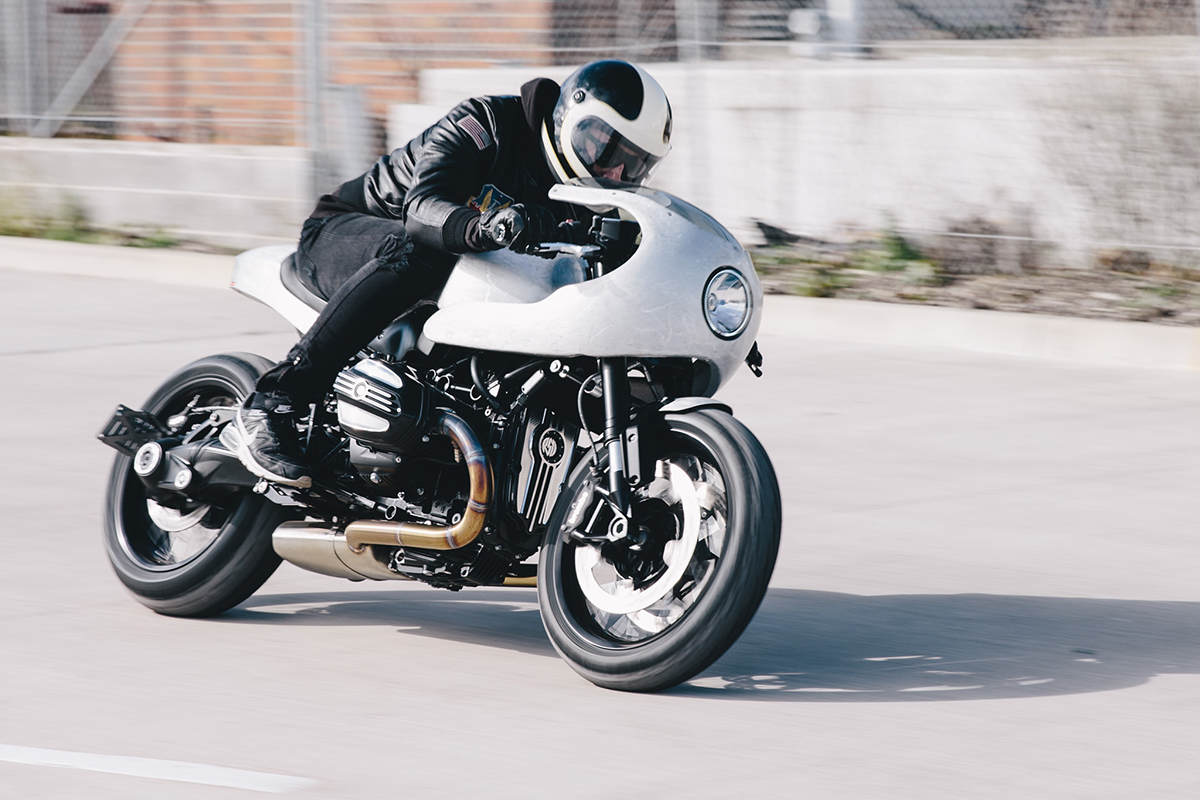 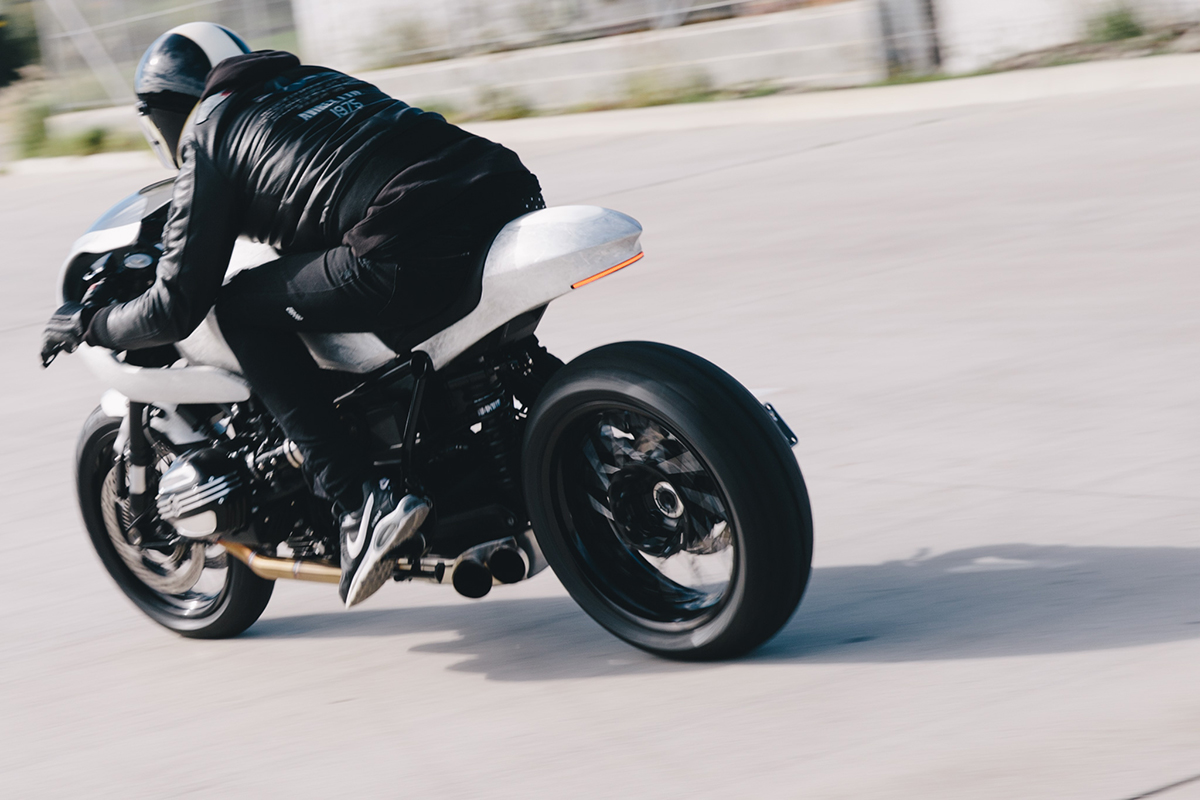