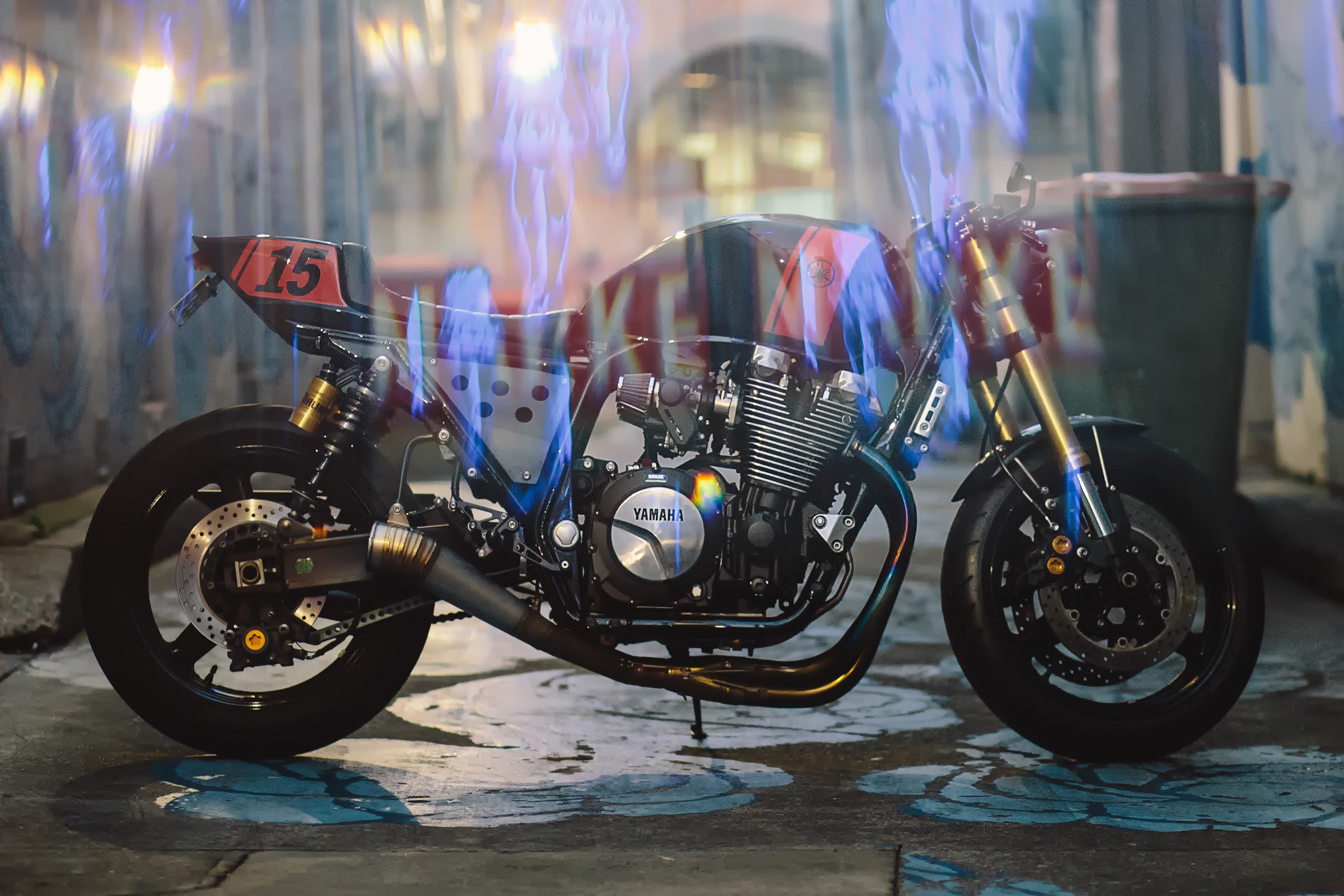 “Hell-hound, hot leather on your legs. That smokin’ powder keg you’re riding on is hell-bound.” And so goes the wailin’ vocals of ‘80’s heavy metal band W.A.S.P’s song ‘Hellion’, and suddenly the moniker for Dave’s Yamaha XJR1300 makes so much sense.

It took the sacrifice of a 30-year-old comic book collection, over 7,000 comics to be precise, for Dave to appease the Motorcycle Gods as he sold one hobby to fund another, this one with more action and less action heroes however. A 1980 Yamaha SR500 would be the machine of choice to pop his speed demon cherry, but this wouldn’t sate his appetite as he craved more from the machine. “The SR500 was so much fun to throw around, but I never felt I could trust it not to break down 50kms from home. Carbis then became the bane of my existence. Since I’m not mechanically minded, fixing it on the fly wasn’t much of an option for me. I had enough…” 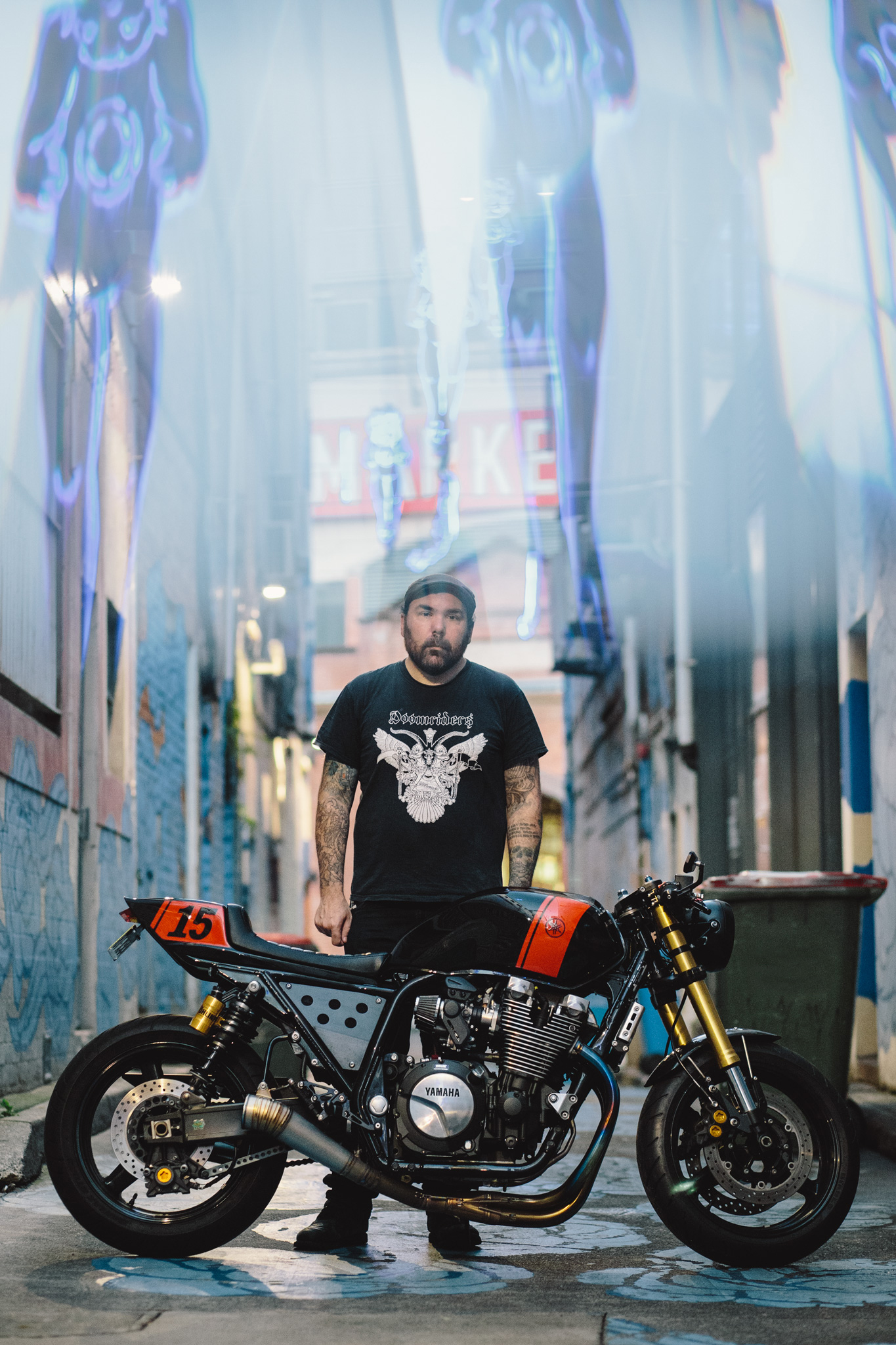 Now that Dave was firmly addicted to riding, he needed to find the perfect machine for himself. It had to be modern, reliable, and of course the most important thing – powerful. “I had always like Triumph Thruxtons, so many people had either them or a Bonneville. I thought “they must be a pretty solid bike, and they do look great when some custom work has gone into them!” But it wouldn’t be a British bike that Dave would end up with, as Harley and Jeff from RB Racing would tell Dave what’s what and show him some more aggressive options. Some things need to be done right – If you’re going to steal a car, steel a Ferrari.

The final decision would come down to either a Honda CB1300, or a Yamaha XJR1300. Having already read the title of this post, and seen the pictures, it doesn’t take a genius to figure out which bike was chosen in the end. After pouring through reams of information (much in the same way Gandalf did in The Fellowship of the Ring when he ditched Frodo to go read up on the One Ring, you remember the scene) and finally sitting on Harley’s own XJR1300, it was settled. “It felt great, and I knew this was the bike for me.” 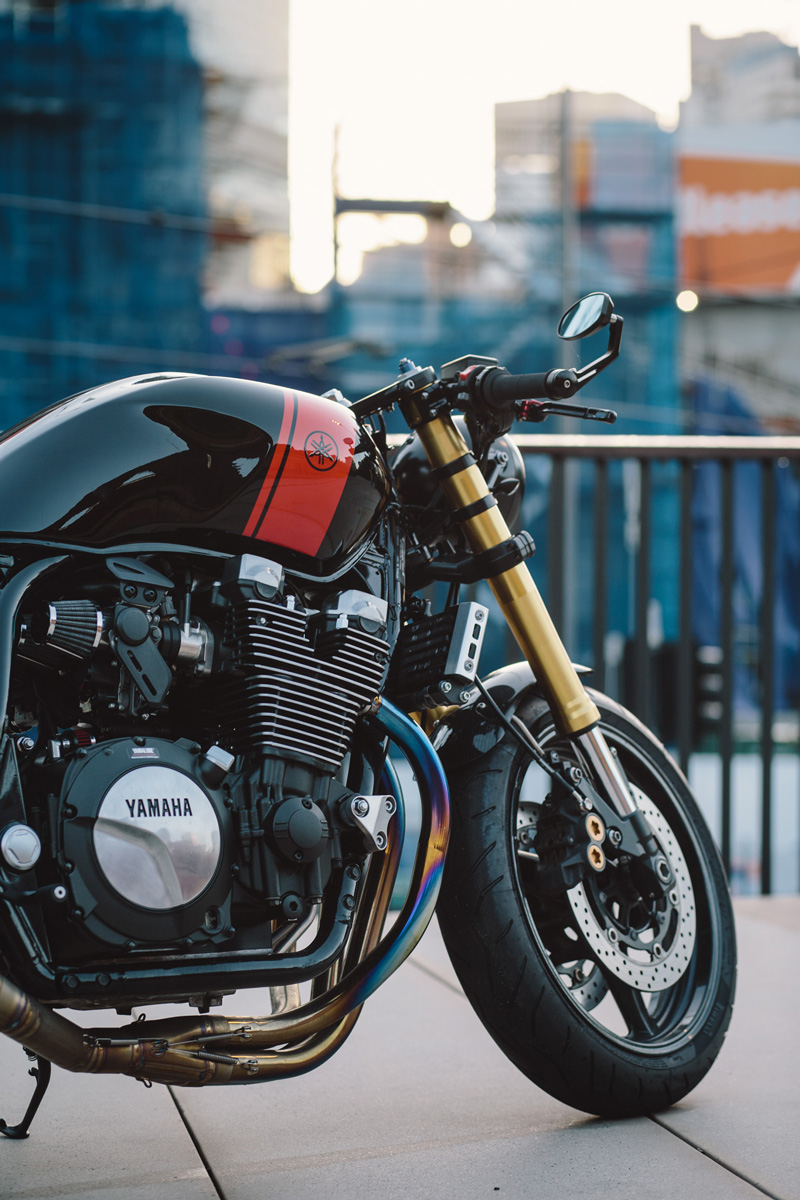 The block of marble was now chosen, but the final product was yet to be realised. Being a Commercial Illustrator by trade, Dave got to work with draft designs of what he wanted his new crotch-rocket to be – red, black, chunky and aggressive. With this strong concept, it was time to take it to Harley and get the wheels rolling. “The concept ended up having a few slight changes, but nothing major. The paint design took the longest to get right, but doing what I do for a living I knew that it would.”

Is this a café racer? Is it a street tracker? Is it a street fighter? No labels for this bike, as Dave and RB Racing concentrated more on making the bike right. “The more that people tried to set the bike under a theme the more we just steered clear of the labels and said “Fuck it, it’s just a cool bike!” Though that said, if we were to try pigeon-hole this bike, Harley from RB Racing said it best, “It has all the hallmarks of a proper muscle bike, and take it’s styling cues from a superbike from the early ‘80’s.” A little bit of identity is never bad.“I like Harley’s thoughts on the bike, and after a weekend out at the Barry Sheene Festival of Speed, I couldn’t agree more and now love the bike on a whole new level.” 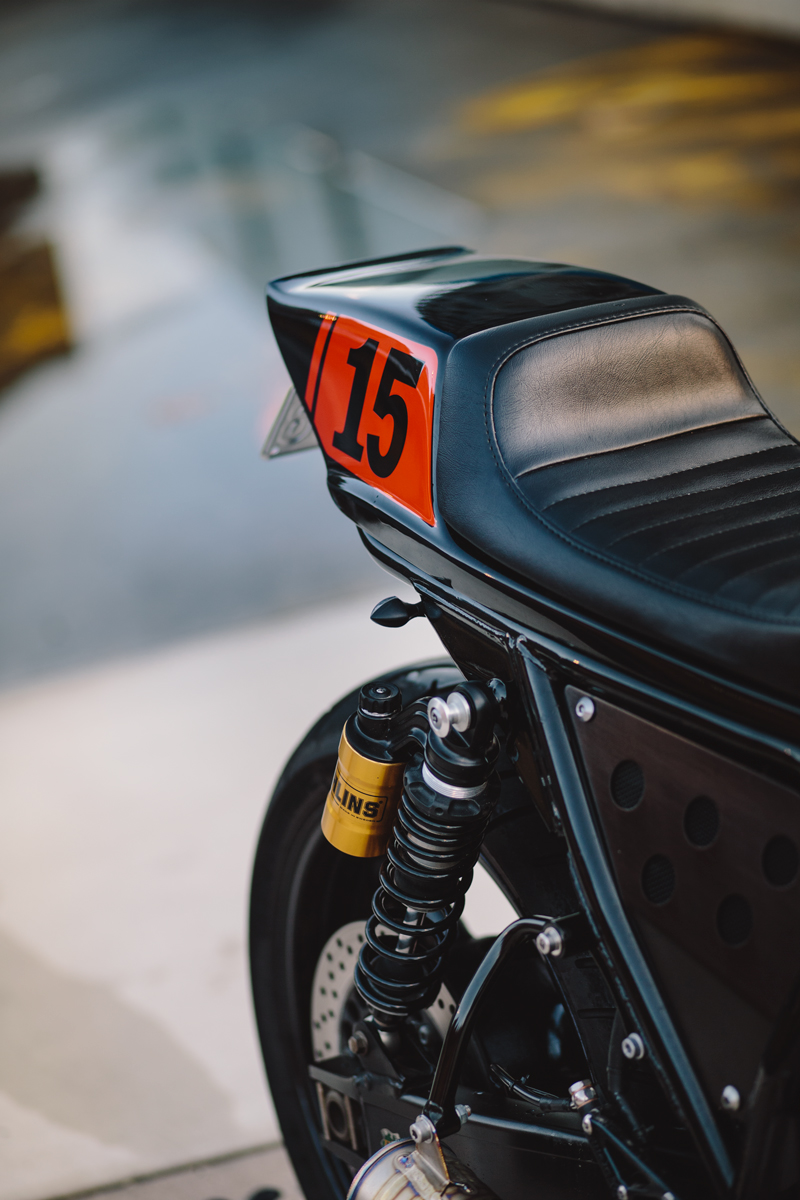 Two key parts of this bike stick out, the super tidy tail and the bright and triumphant exhaust. “I got the tail from Dime City Cycles, which is no longer available and I reckon I got the last one! It fits the bike perfectly, like it was made for it.” It certainly compliments the profile of the bike bloody well; with the number 15 representing the year Dave’s daughter was born (2015, not 1915, believe it or not). The second stand out on this is the Asahina Racing full titanium exhaust system. “It cost a pretty penny, but it was so worth it. The sound… oh wow the sound!” “Oh wow” doesn’t really do the pipes justice, more like “Fuck yeah, let’s ride this metal steed into the fires of hell, punch Satan in the throat and ride the fuck out of there with one wheel in the air” 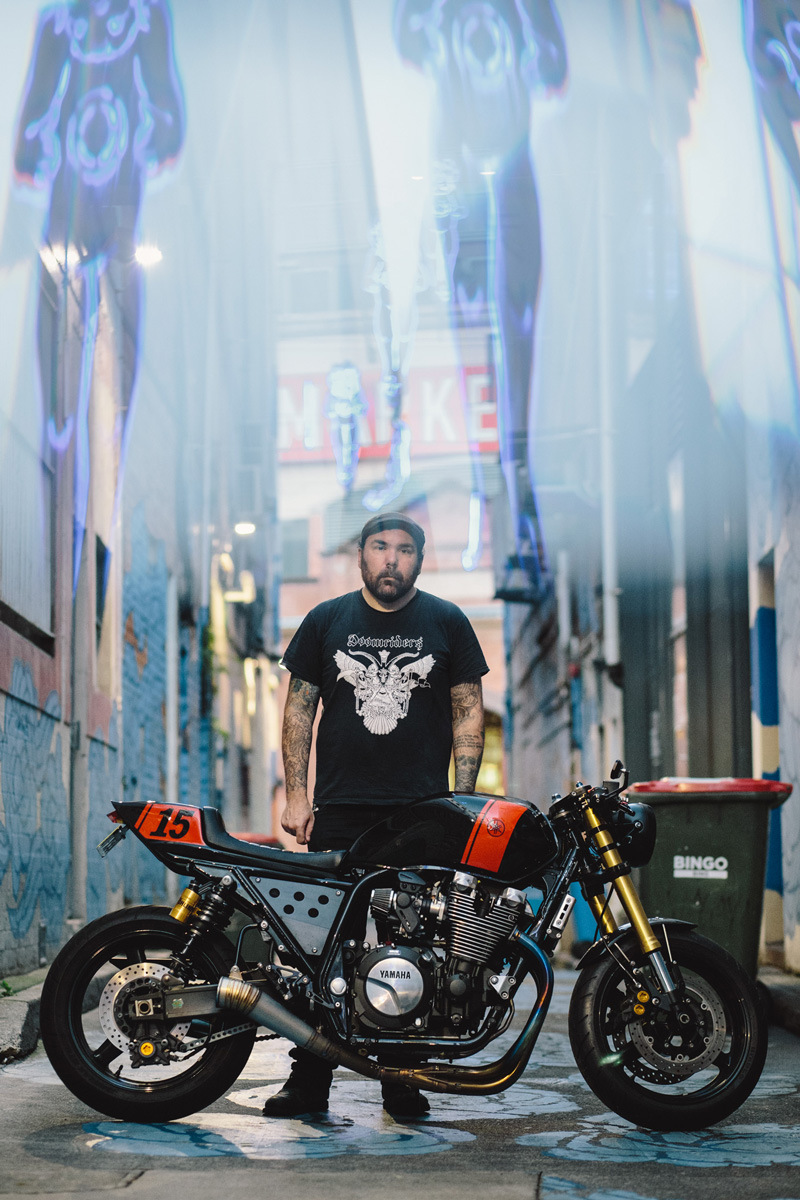 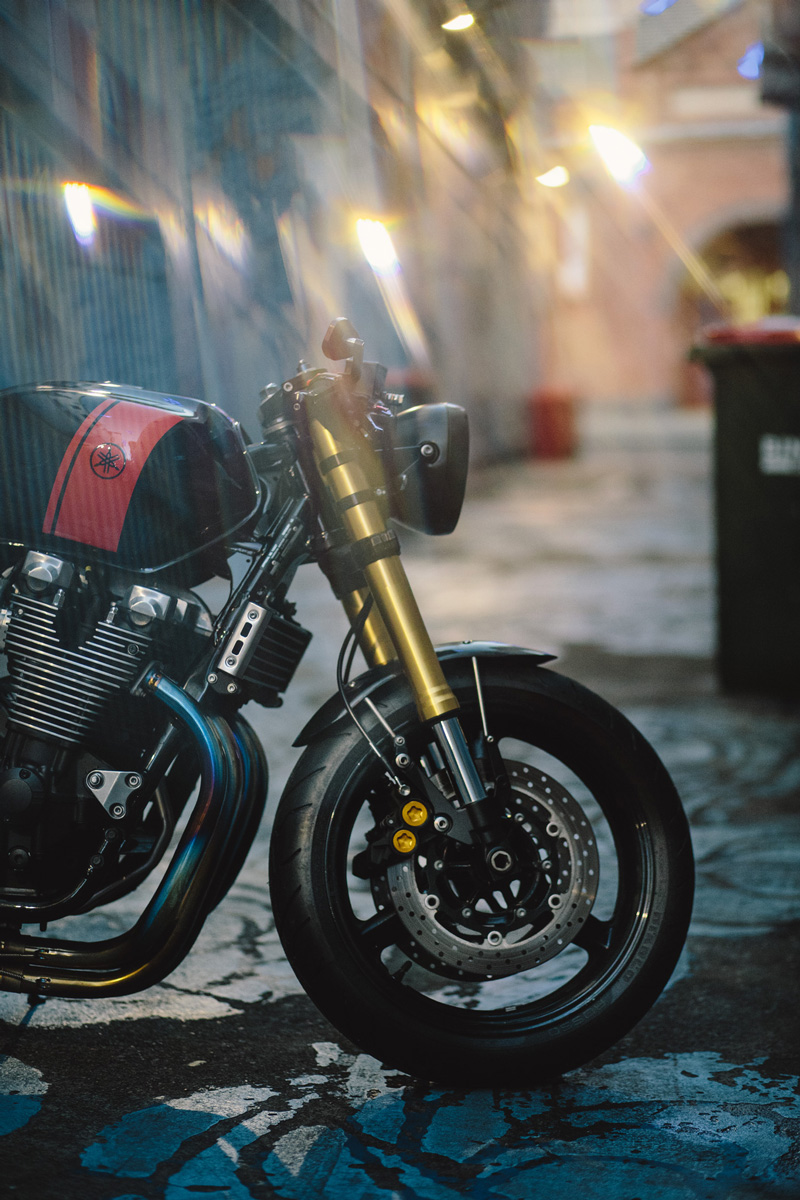 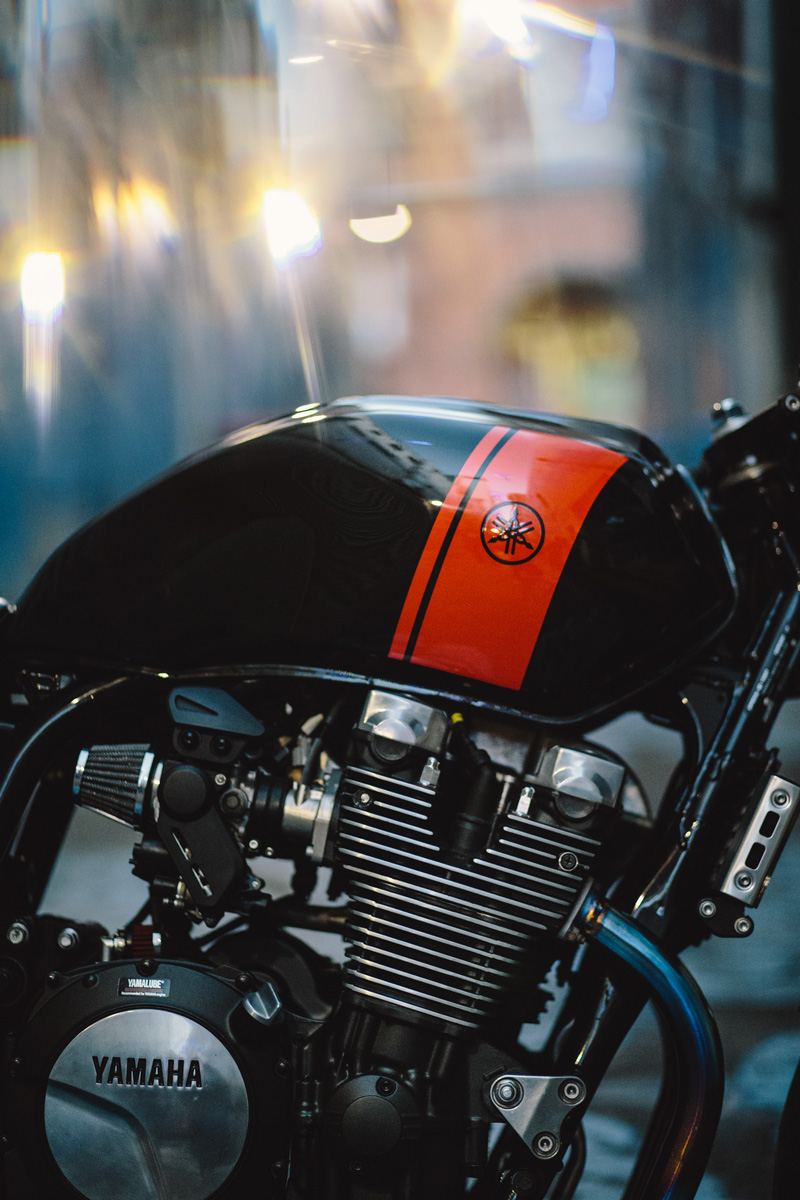 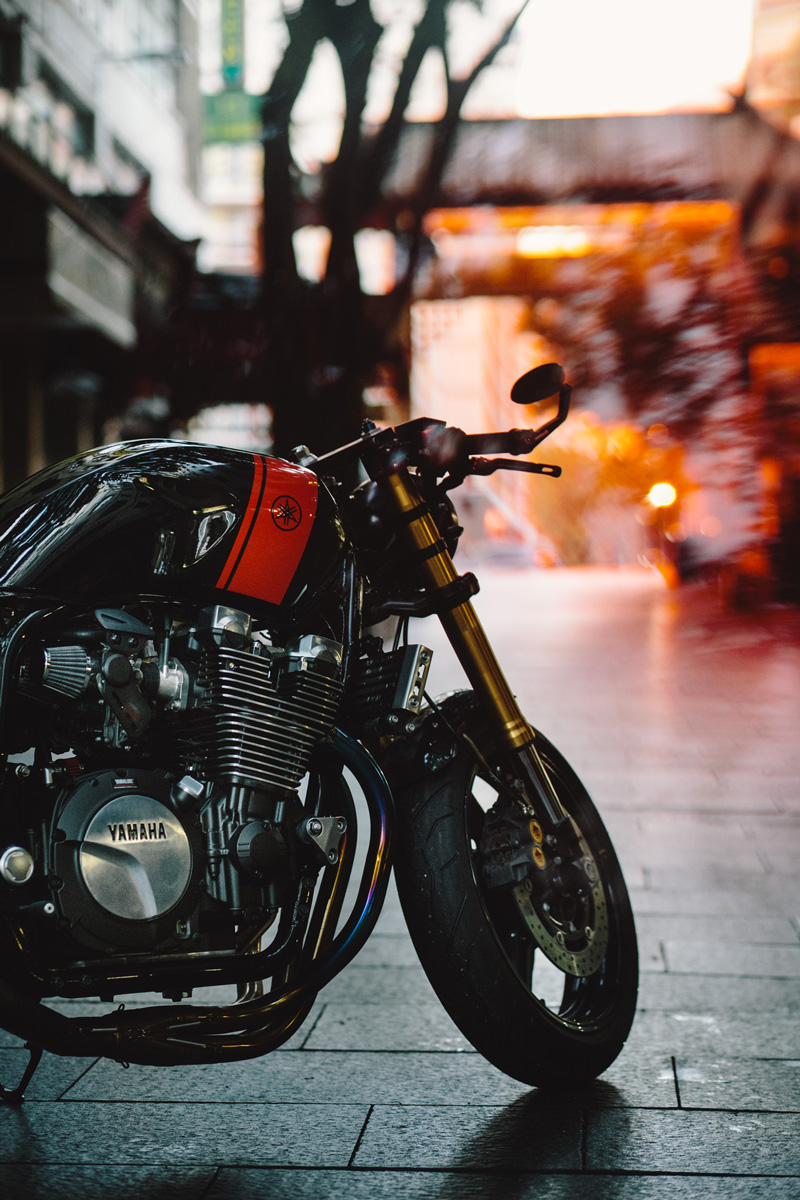 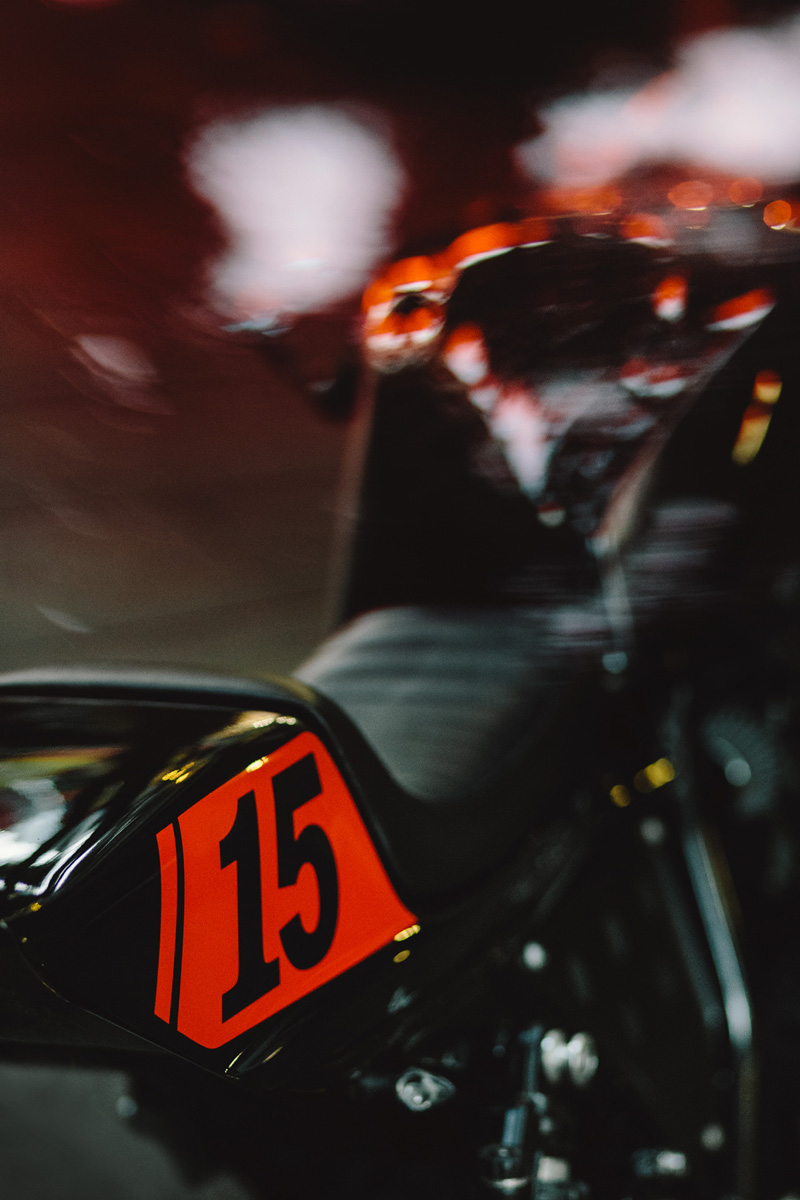 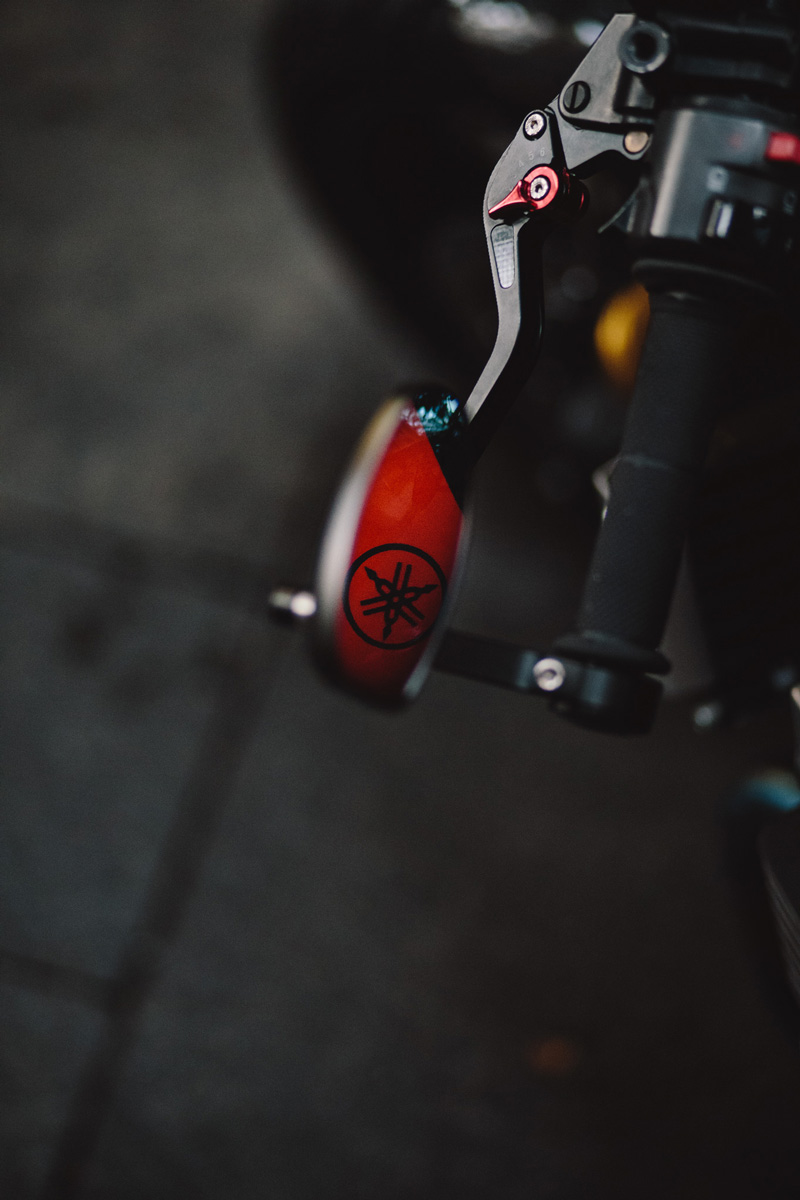 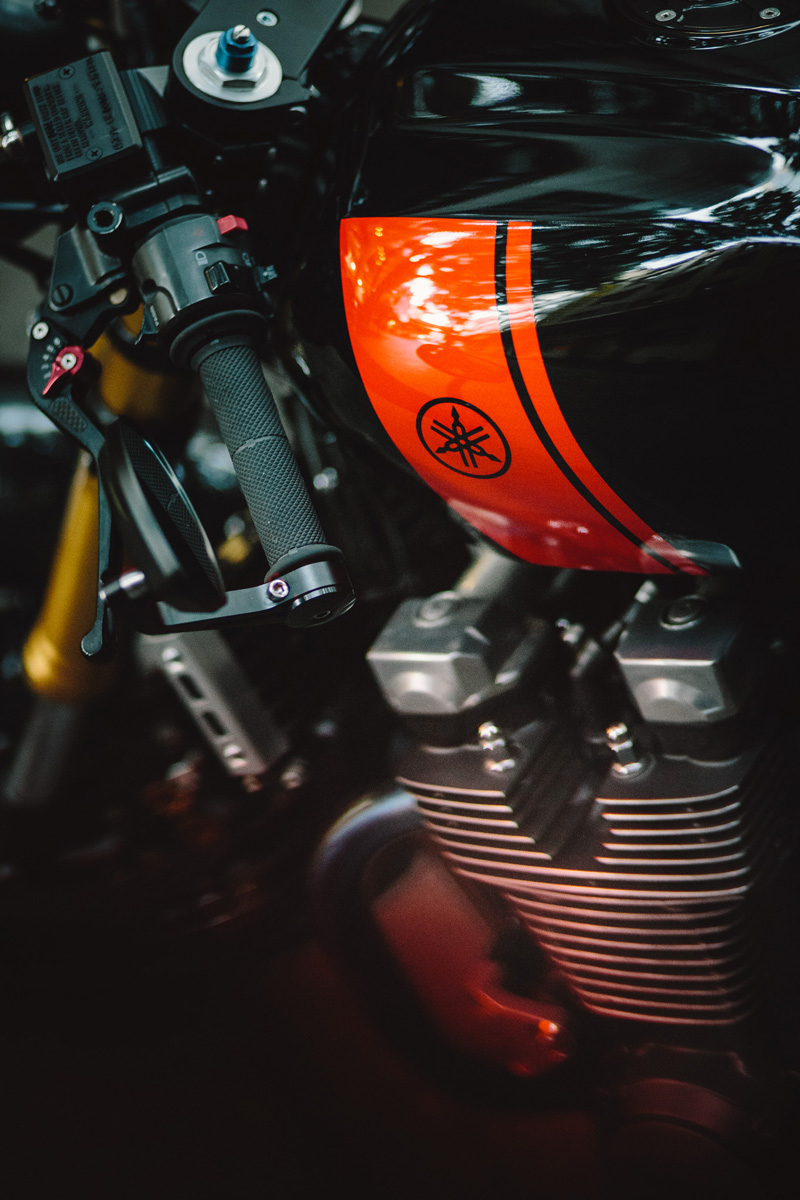 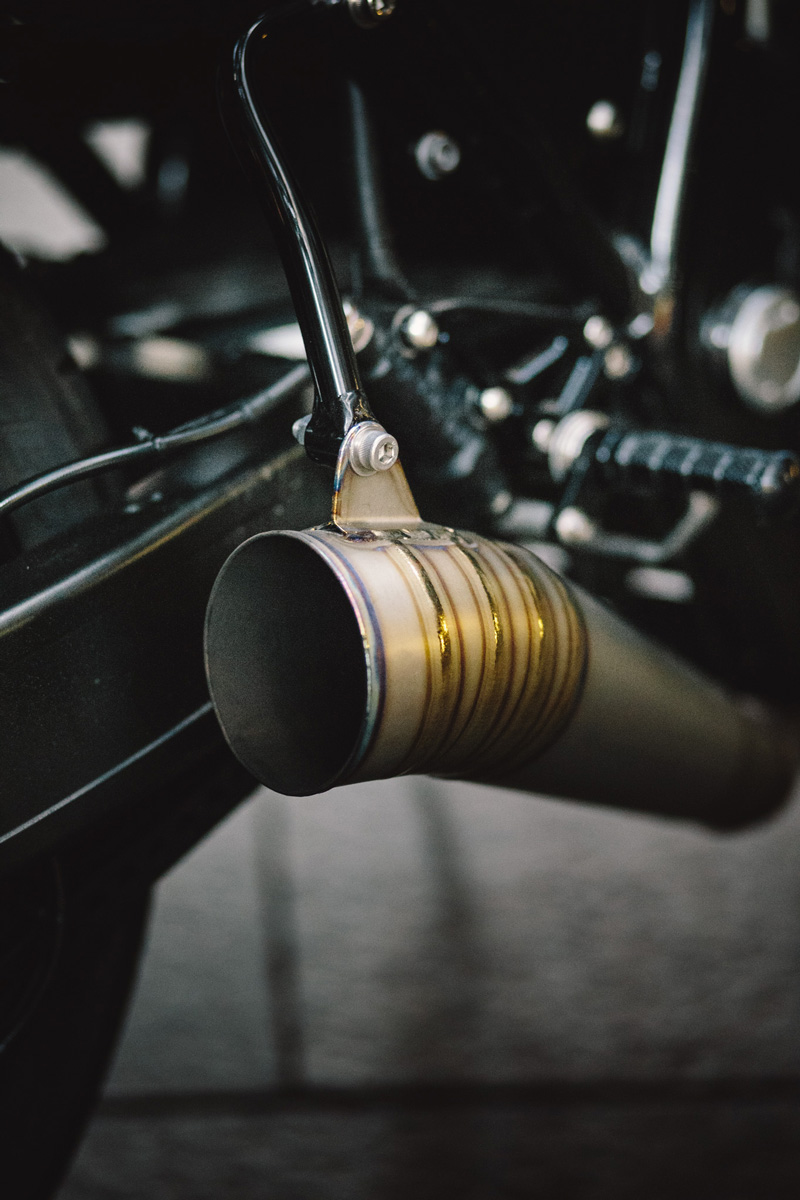 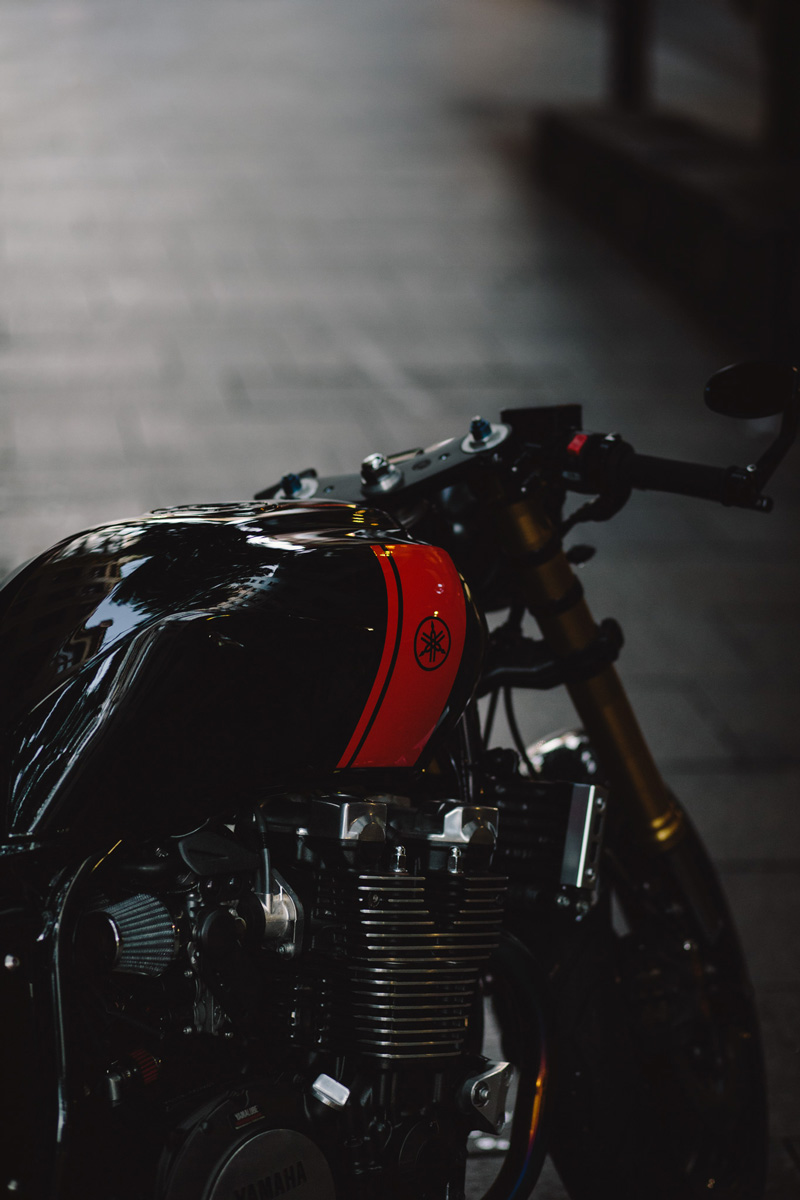 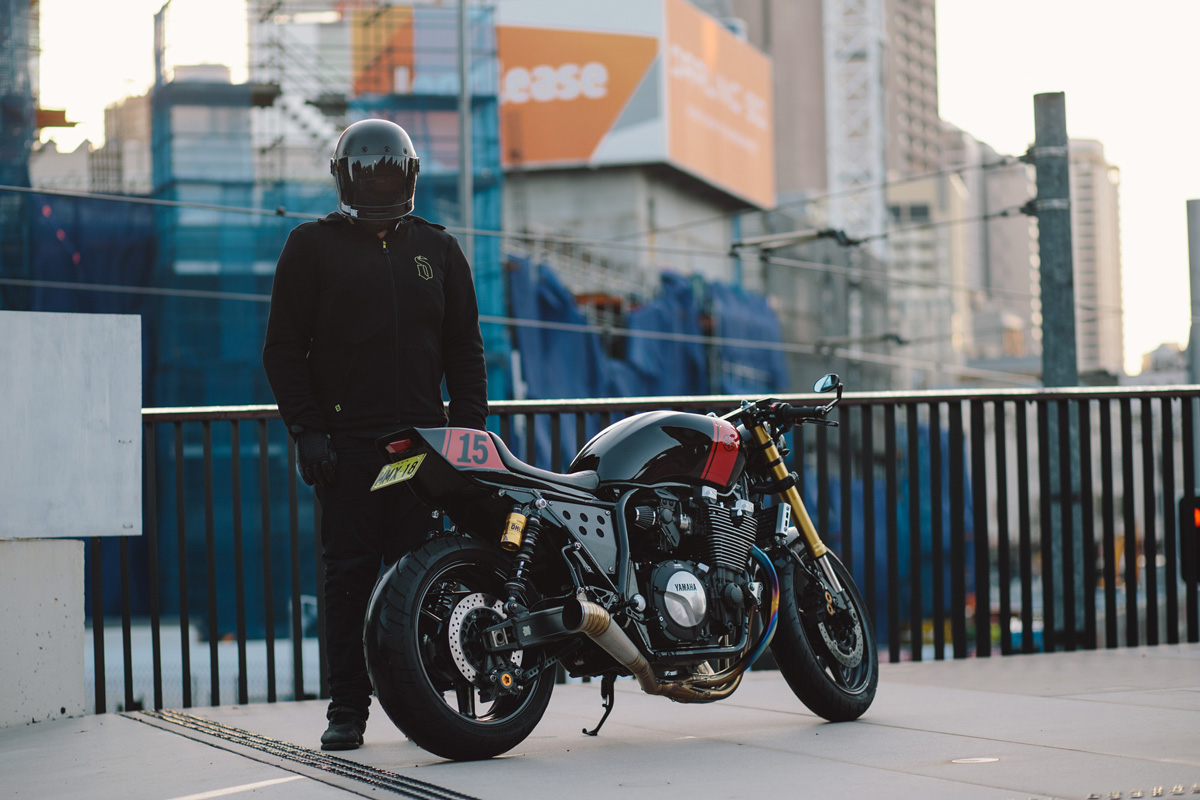 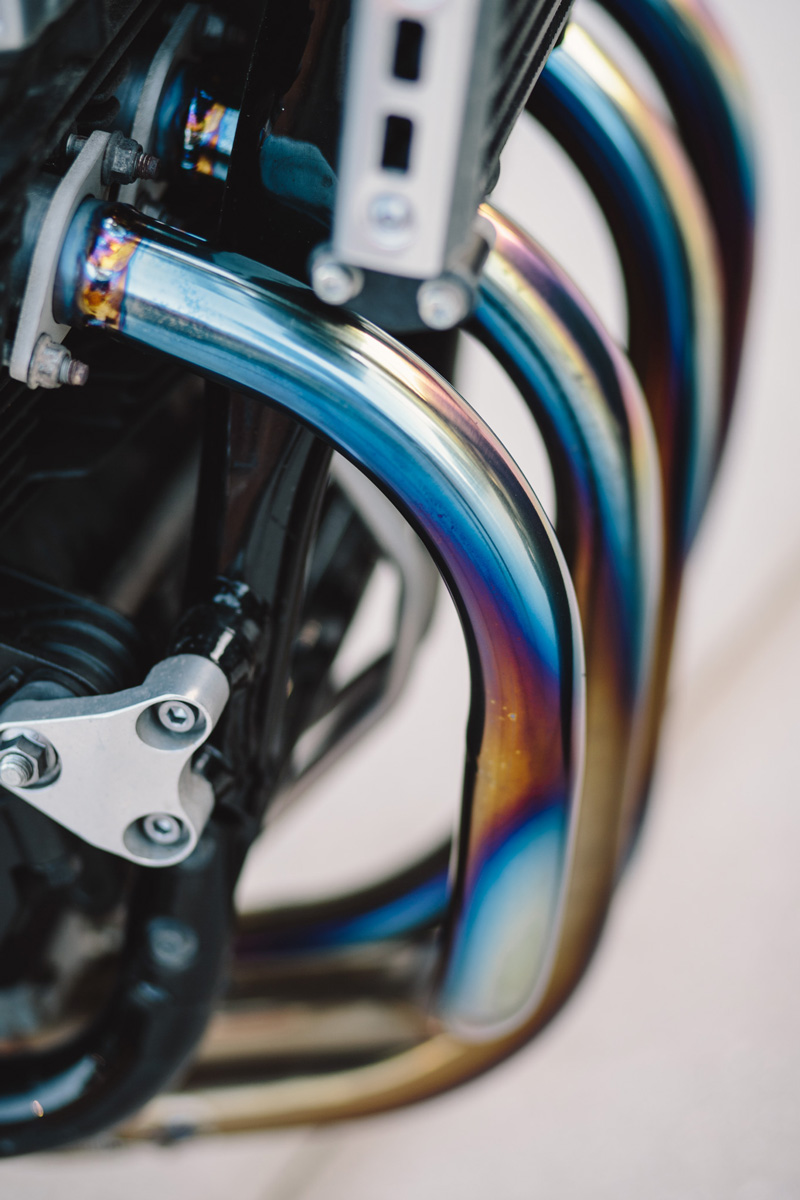