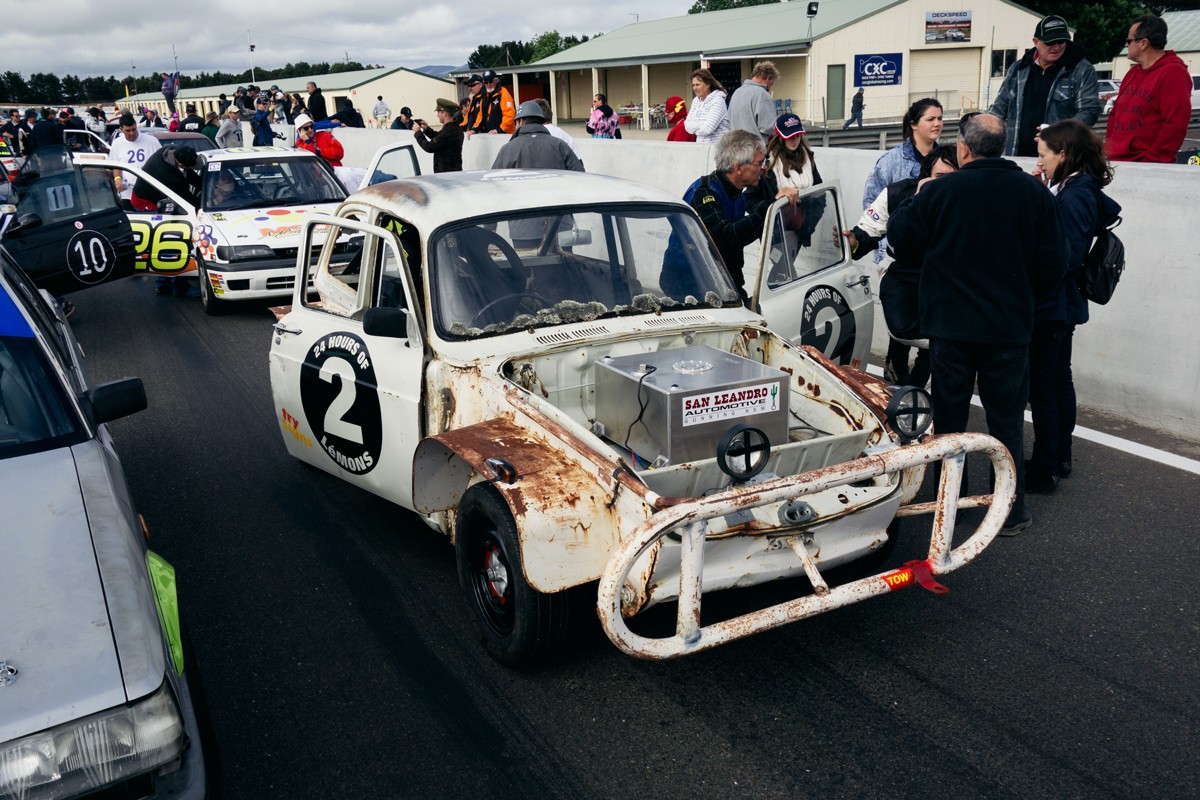 At the start of 2015, Throttle Roll El Capitan Mark Hawwa was invited by the organisers of the 24 Hour of Lemons race to enter a race team for the inaugural Australian event being held on October 27-29th. As the name implies, the race lasts for ’24 hours’ just like the Lemans original, albeit run over two days and limited to $1000 bangers.

Needing a band of brothers to both prepare and drive the car, Mark first turned to Throttle Roll regular Damon Dupriez to be team manager, who then enlisted SCR members Michael and Stephen Broholm, Ethan Willott, as well as his mate Marcus Jones to join in the fun.

The team settled on the choice of a 1999 Ford Falcon XR6 manual, which offered reliability, cheap parts, and rear drive fun. With a suitable car procured, it was fitted with a CAMS certified roll cage and all the pre-requisite FIA certified safety gear, along with a fresh set of brakes all around. This was all that the Lemons rules allowed, which is aimed at keeping the racing affordable and uncomplicated.

Fronting up on practice day, however, it seemed our rivals had ignored these rules as most arrived with heavily modified cars sporting engine swaps, massive brakes and semi-slick tyres. Our Falcon was only one of a handful of the 38 car field that had stuck to the rules, but once racing began it mattered little as the focus was now more about survival than sheer speed.

Our first aim was to ensure all six drivers at least got to have a steer, and since none of the six had ever raced in anger before we decided to stick to short 30 minute stints for the first day. This largely went well, with the only exceptions being Ethan’s tank-slapper and subsequent 360-degree spin after getting too keen with the throttle out of the final turn, and then Mark’s dirt excursion on the final lap of day one due to what could only be described as total and utter brake failure.

At first we thought it was simply boiled brake fluid, but after this was flushed and bled Ethan went out the following morning to discover that we’d in fact melted the backing plate of one of the front pads as he suffered a complete failure of the left front brake caliper! A quick dash into Goulburn Wreckers reaped us a replacement, along with some fresh pads, and the boys had to Falcon lapping eagerly once again by lunchtime on day two. 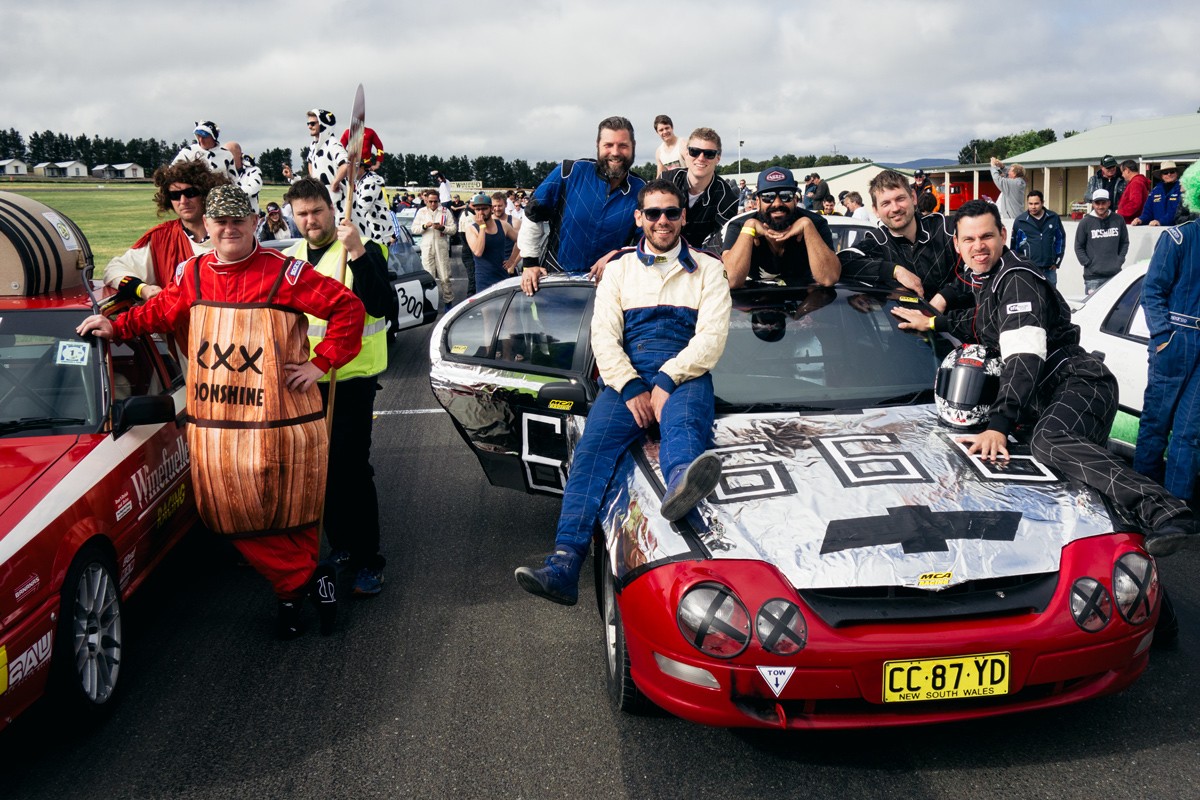 As we were well down the leader board by now the new aim was to focus on getting the car home to the chequered flag, with the team agreeing that 1:25 to 1:27-sec laps was a suitable target. Mark, though, seemed hell bent on wringing the car’s neck, and on his final stint shaved the time down to 1:20.4-sec before the team stepped in by showing him the ‘Slow the FUCK down’ board on pit straight.

With 30 mins left of the race Damon then took over, resisting the temptation to better Mark’s time and driving conservatively to ensure the team could savour the joys of being one of only about 25 cars that made it to the finishing line. To cap off a great few days the Throttle Roll team was even awarded the ‘Battlers’ trophy in recognition for all our hard work. 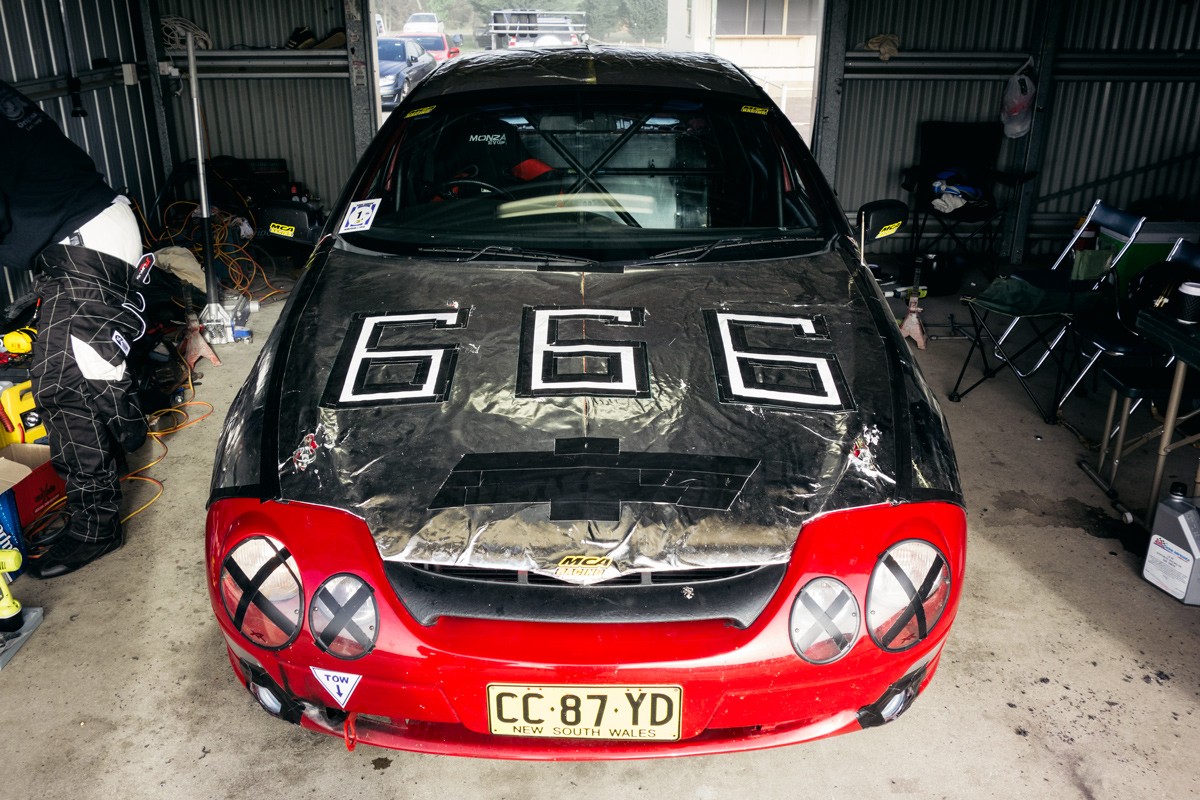 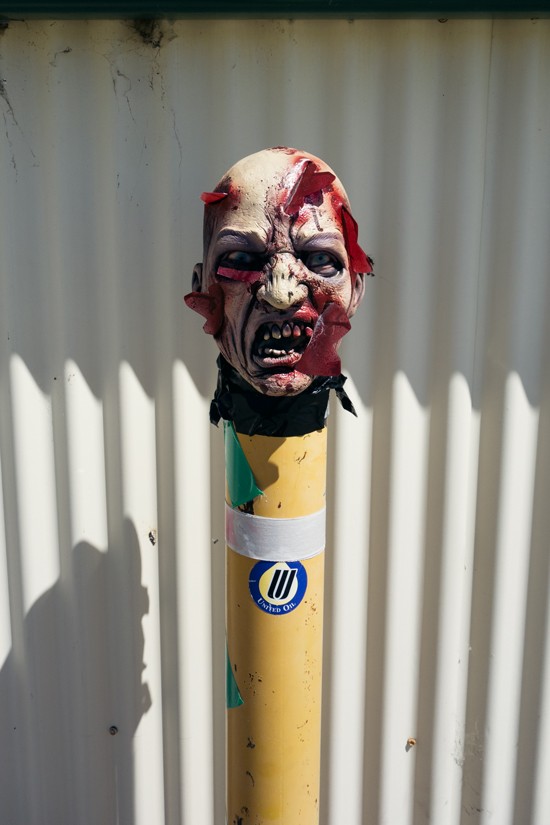 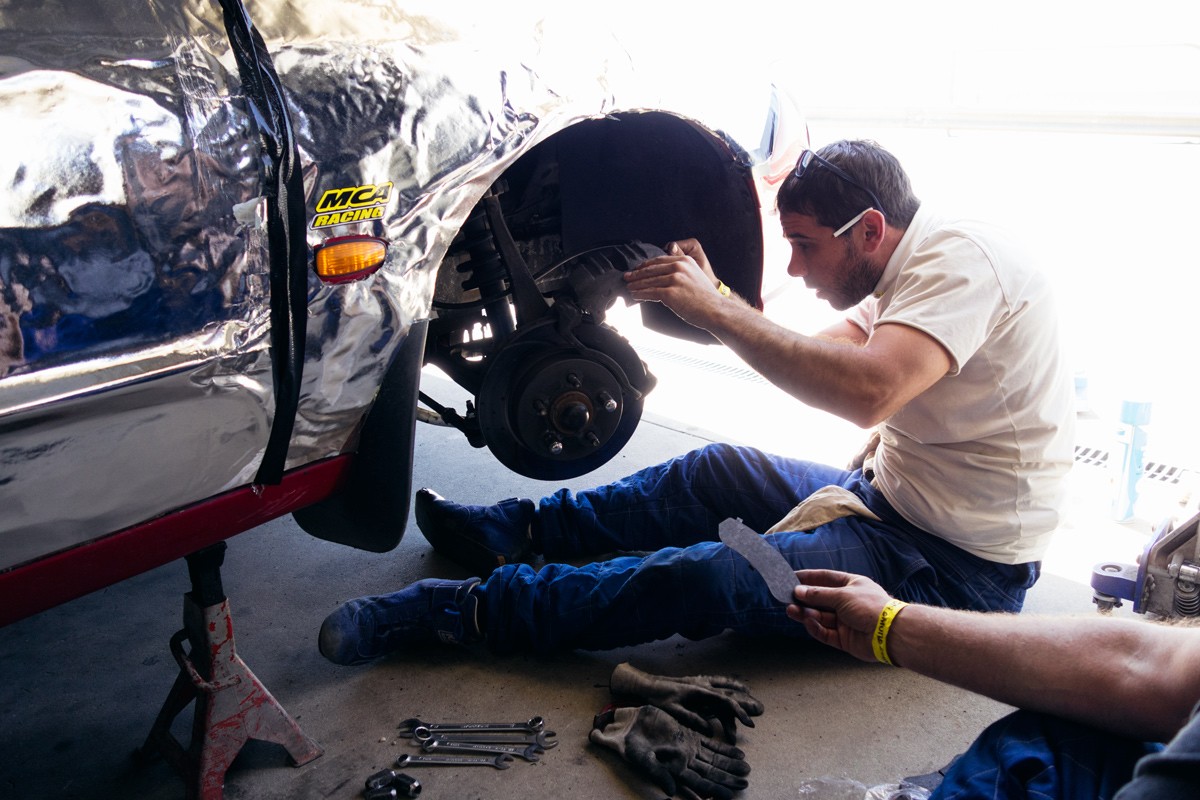 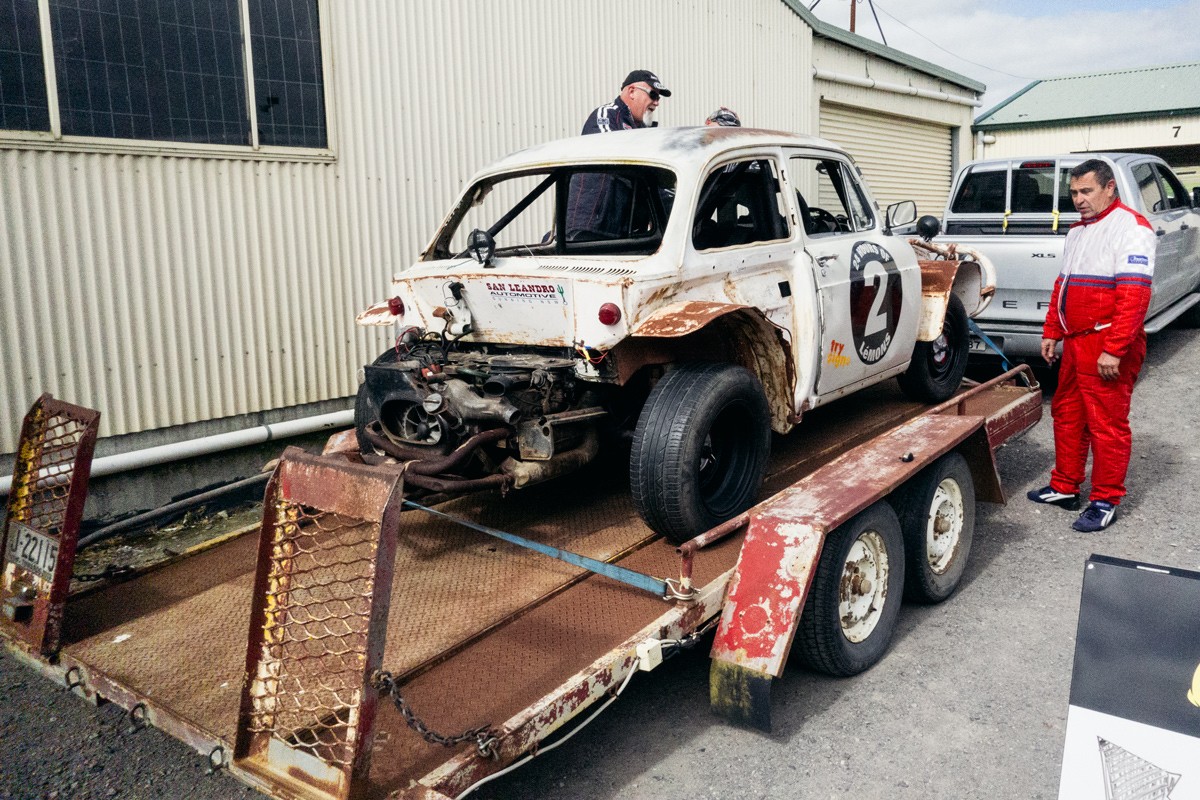 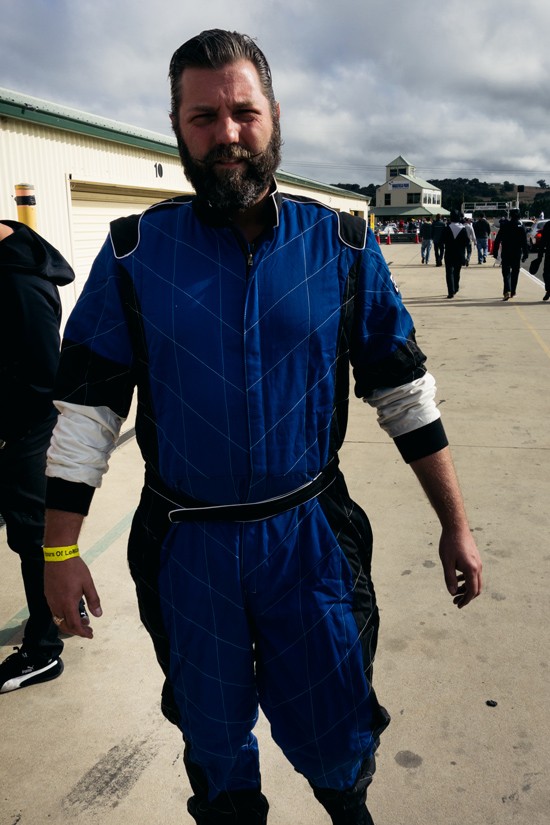 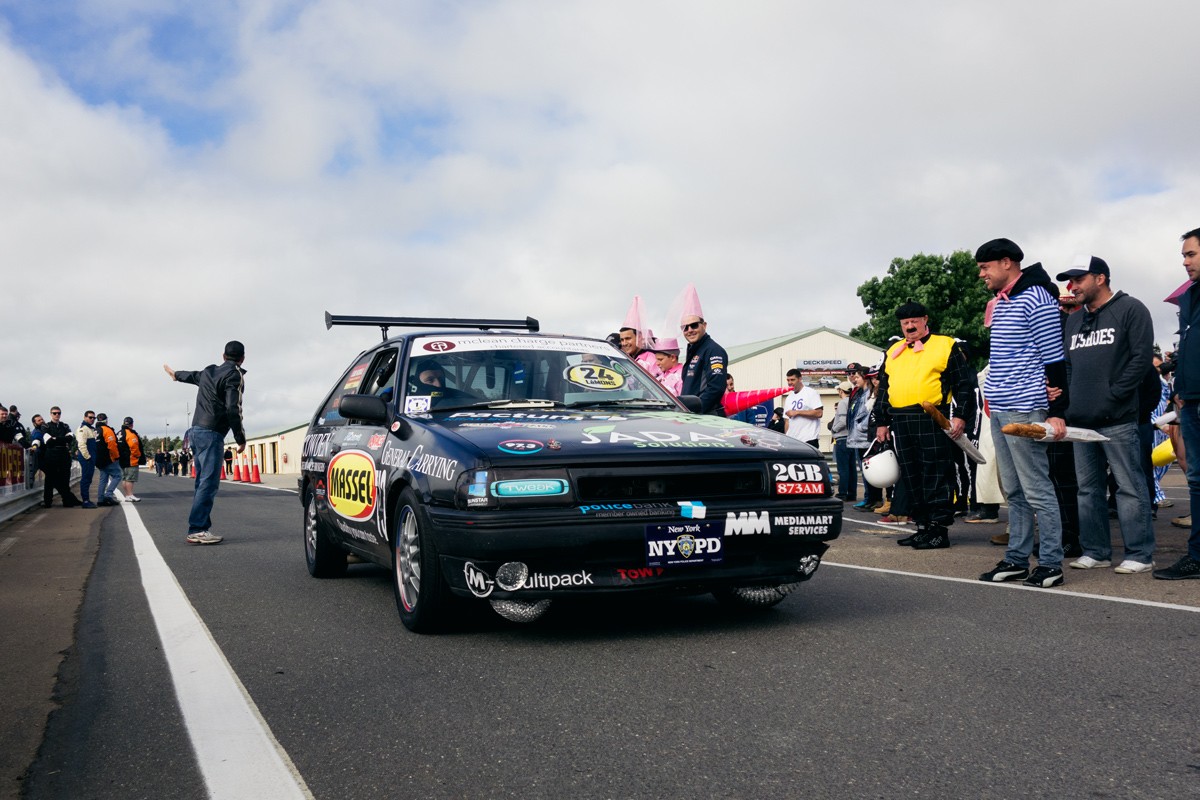 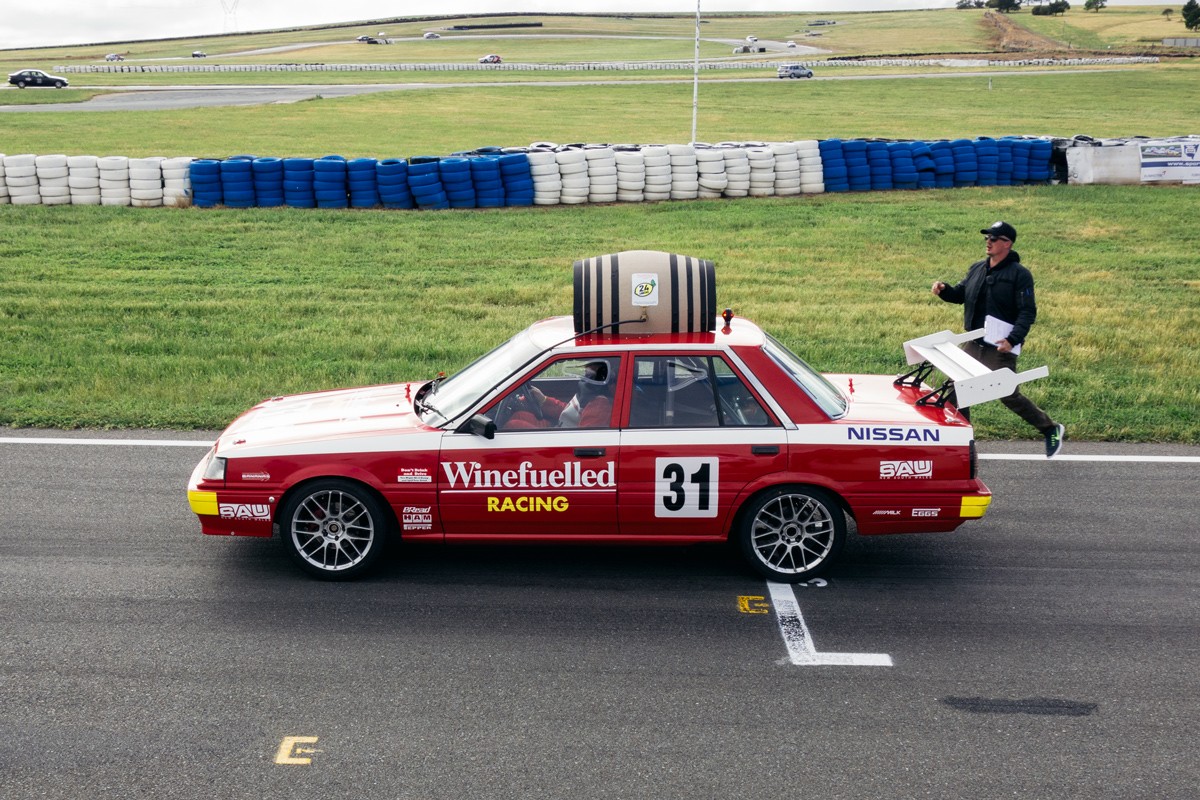 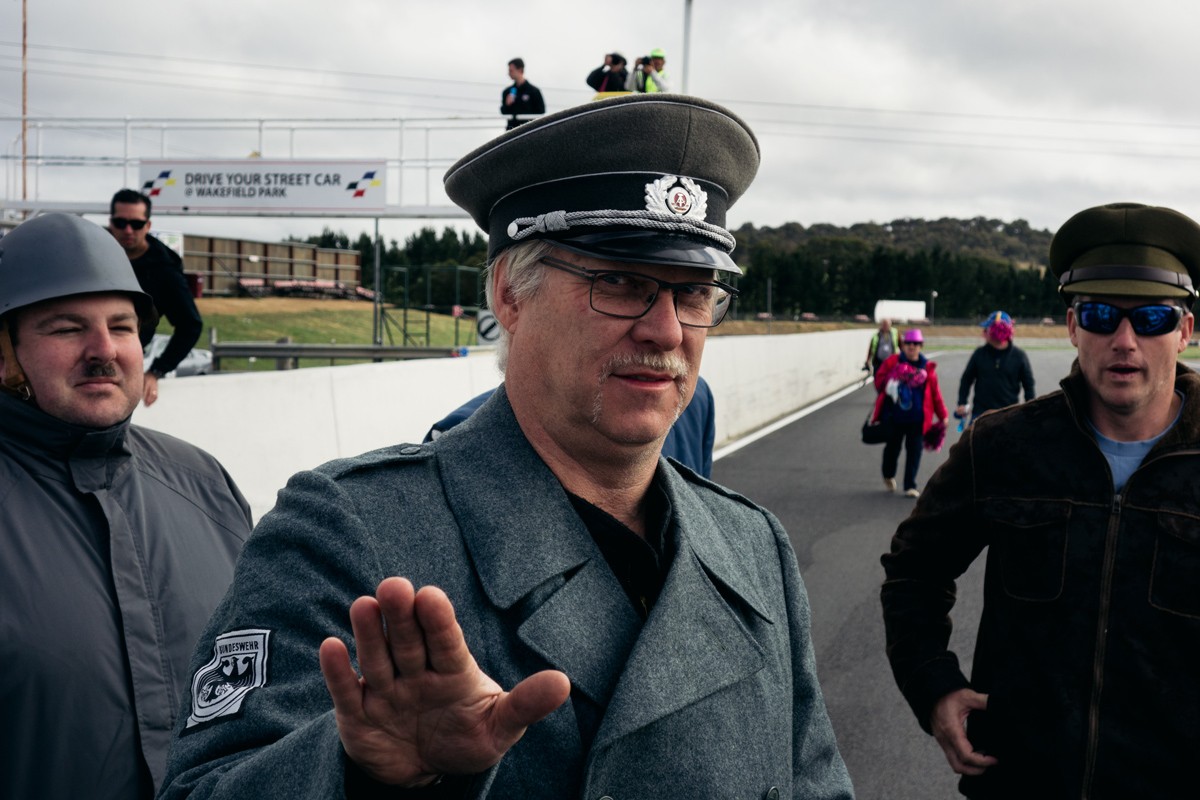 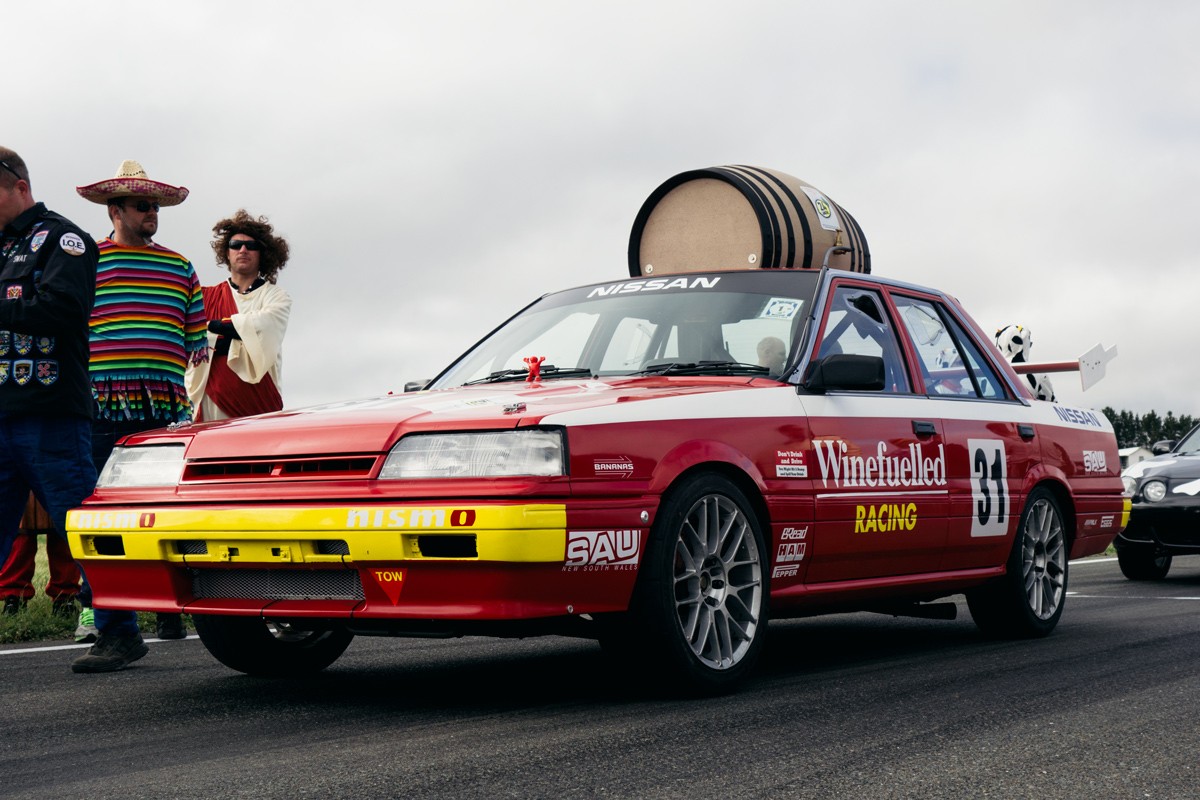 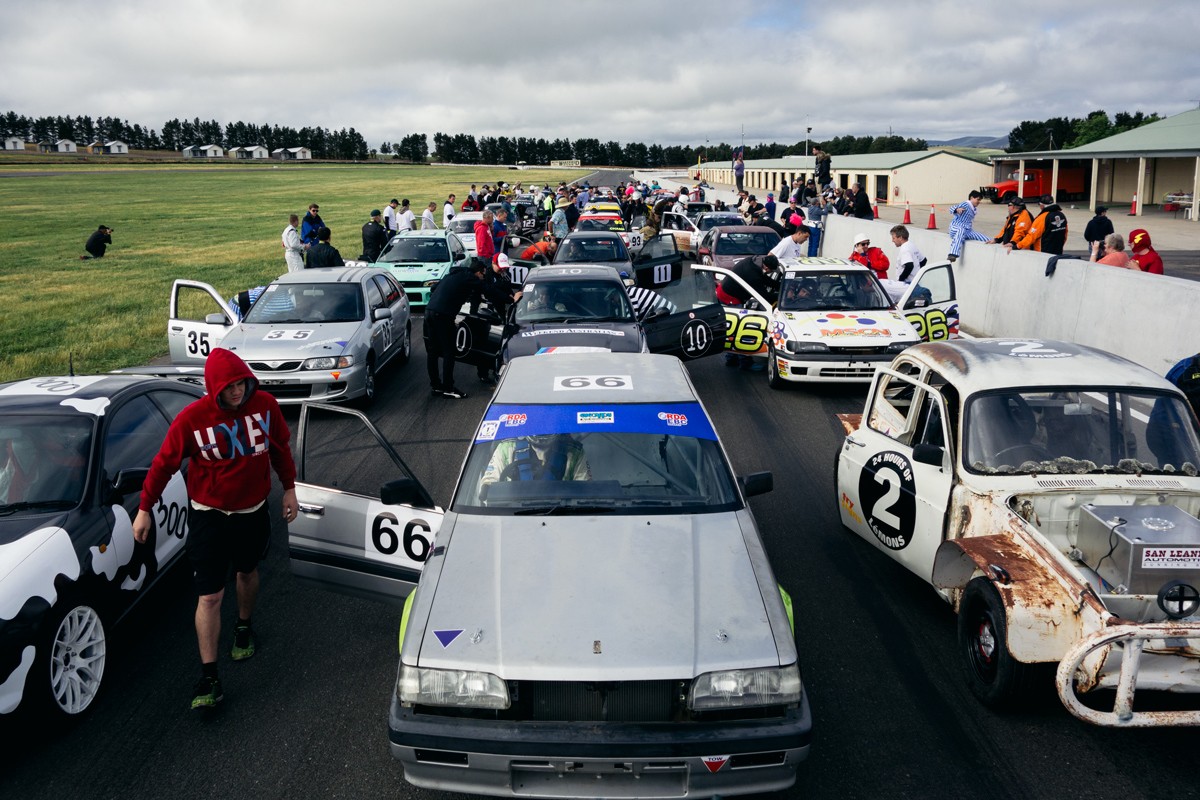 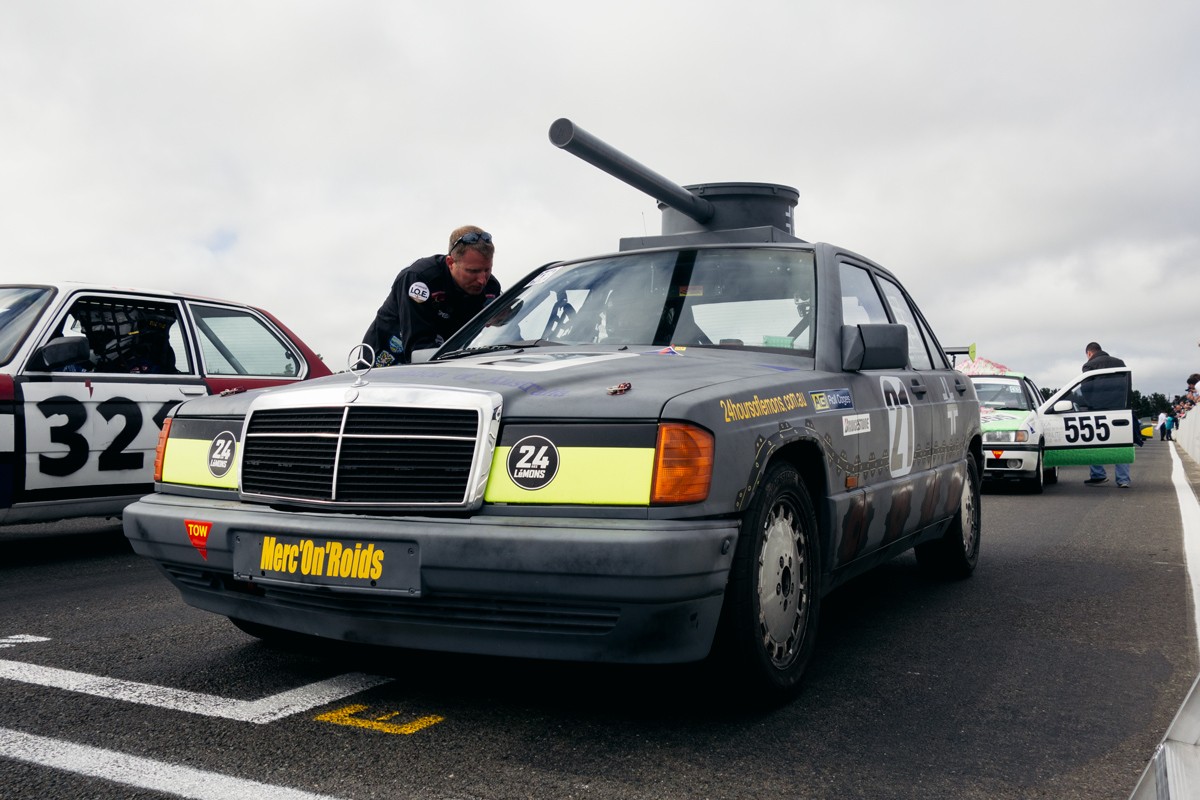 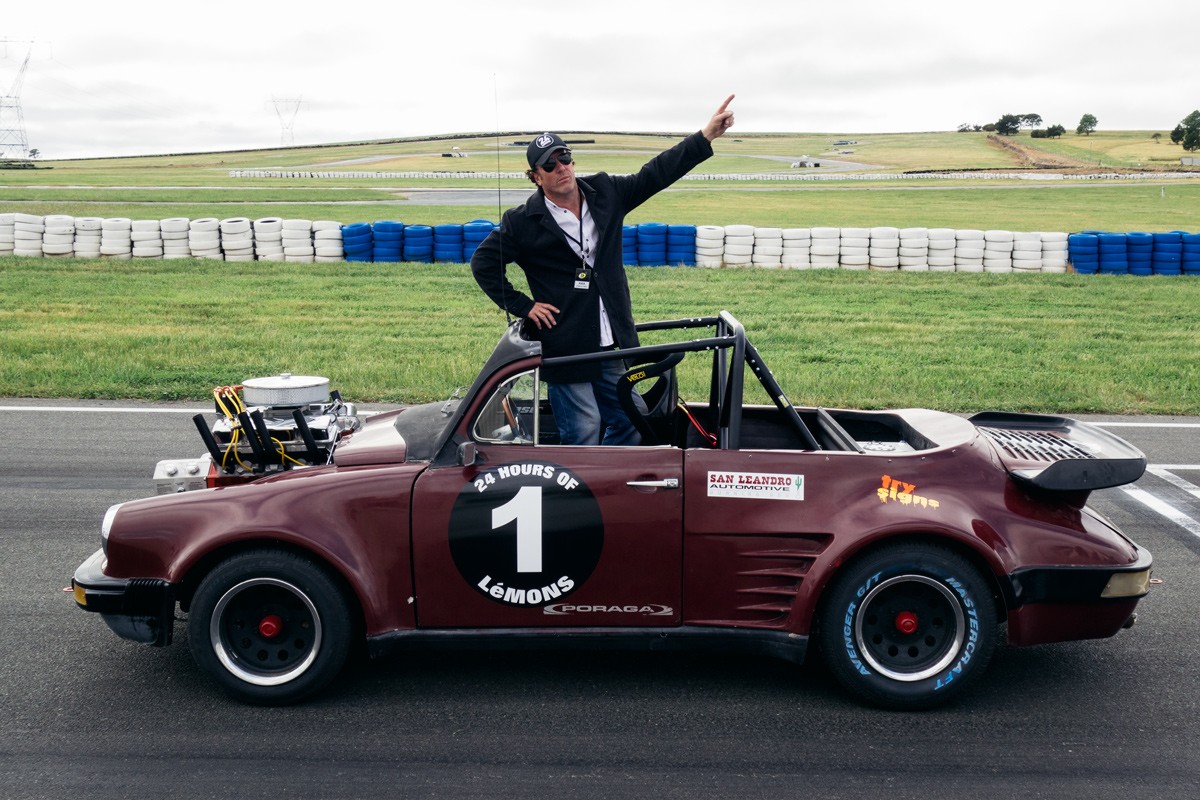 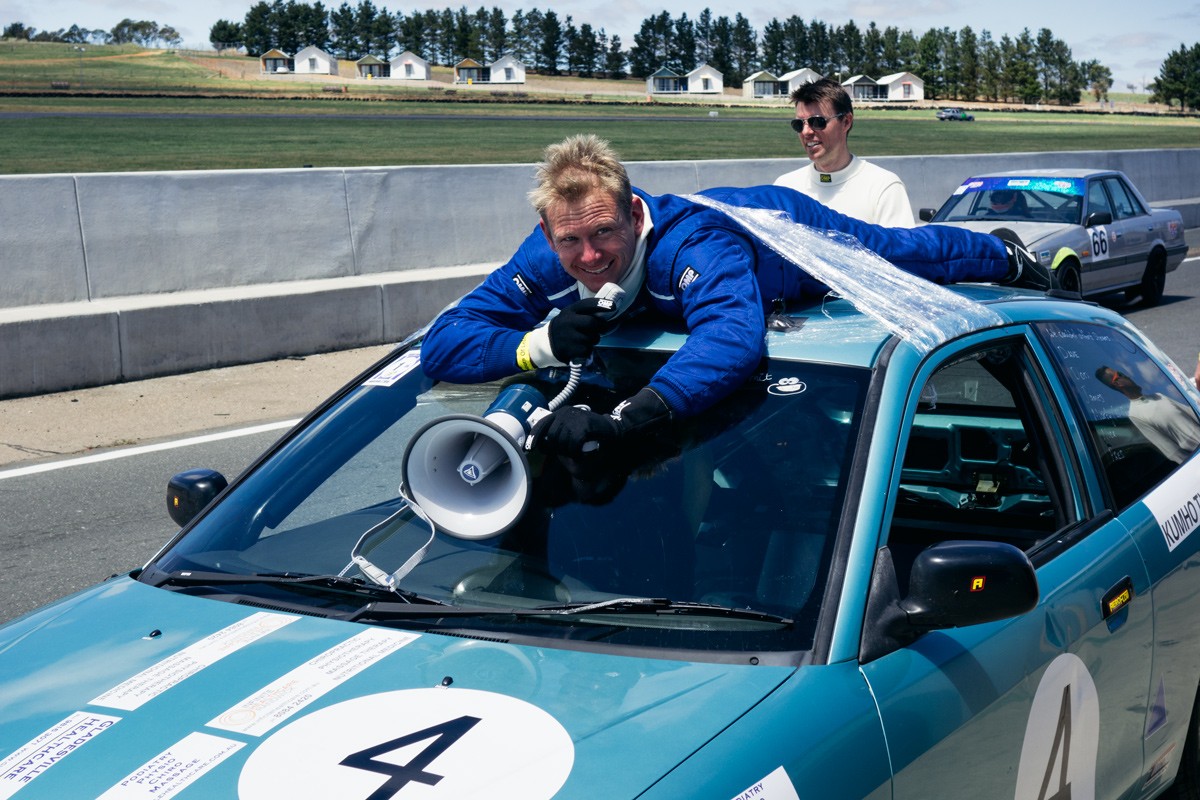