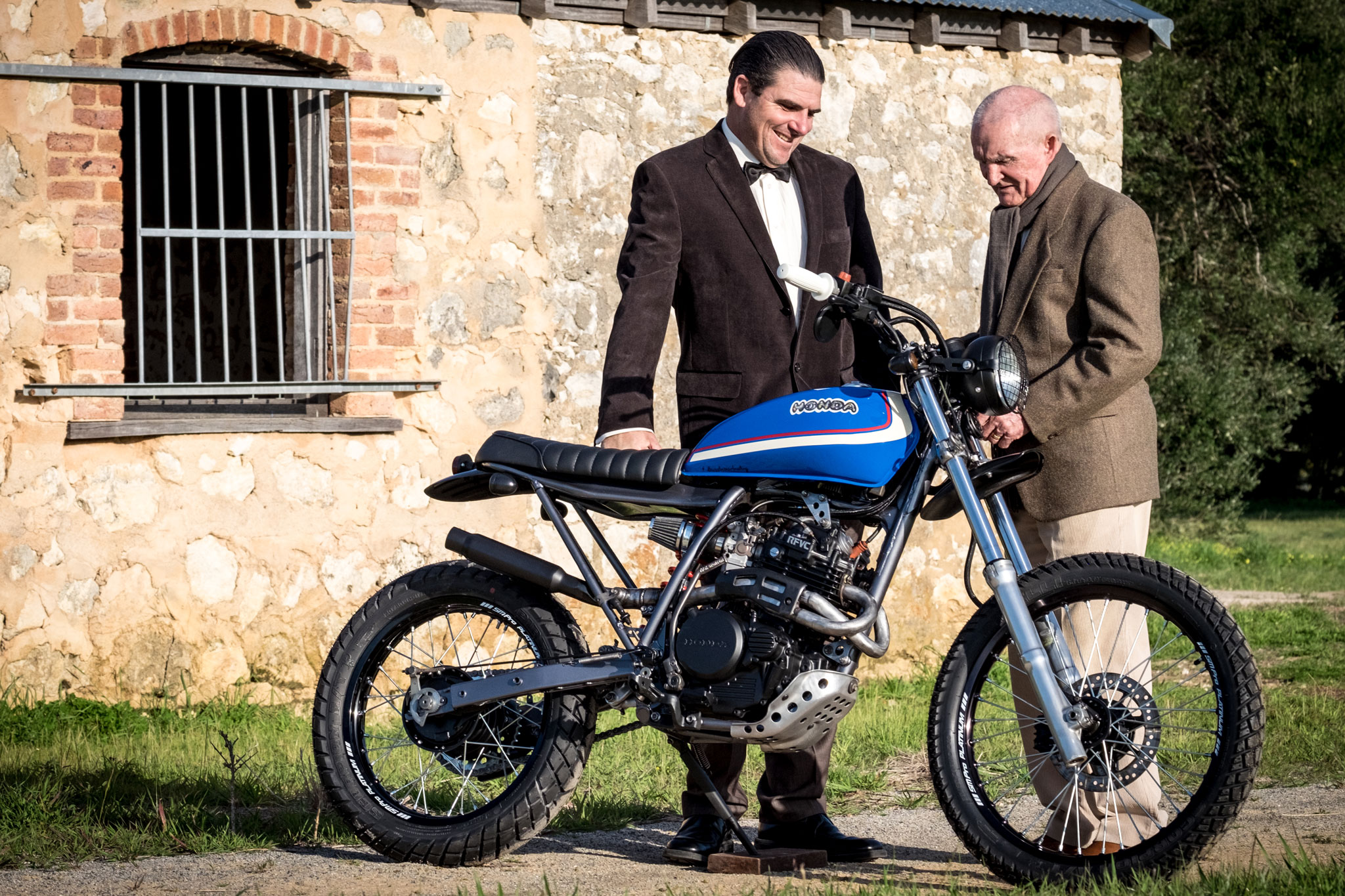 The Distinguished Gentleman’s Ride has been bringing out the best in people across the globe. This niche, dapper event is in its 6th year of raising funds and awareness for prostate cancer and improving men’s mental health. Heeding this noble call is a bloke named Bryce, who has created a neat custom machine that will be given away to one lucky donor of DGR this year. 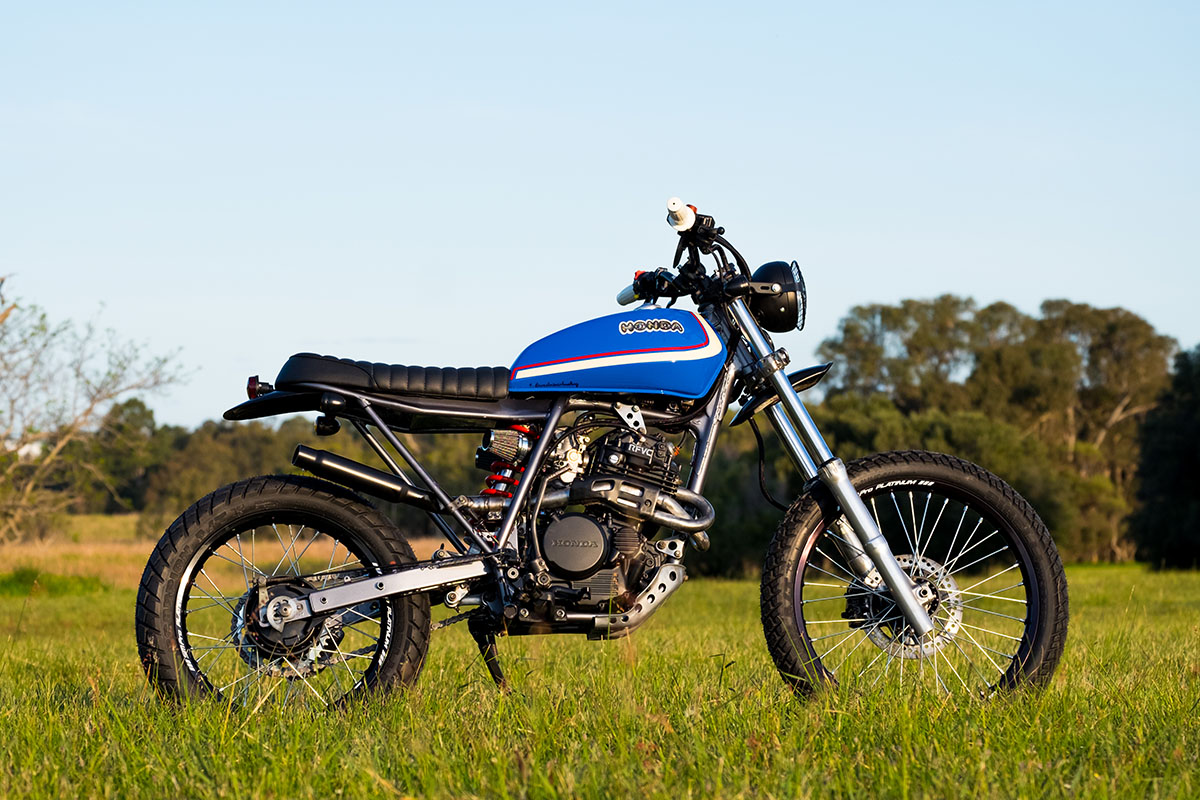 It would be a few years back that Bryce first heard about DGR, and form there the personal side to this cause would appear. “I had a cruiser at the time and didn’t have enough money for more than one bike, so couldn’t participate when I first heard of the event. My brother-in-law, Nick, had lost his father to cancer around the same time. Last year, I was drinking Sailor Jerry’s one night with the two brothers-in-law, Peter and Nick, who also wanted to build more custom bikes, but each had young families we were completely time-poor. We had a few drinks, and I put forward my idea of continuing working on our own bikes, but also building a bike which would go to charity.” 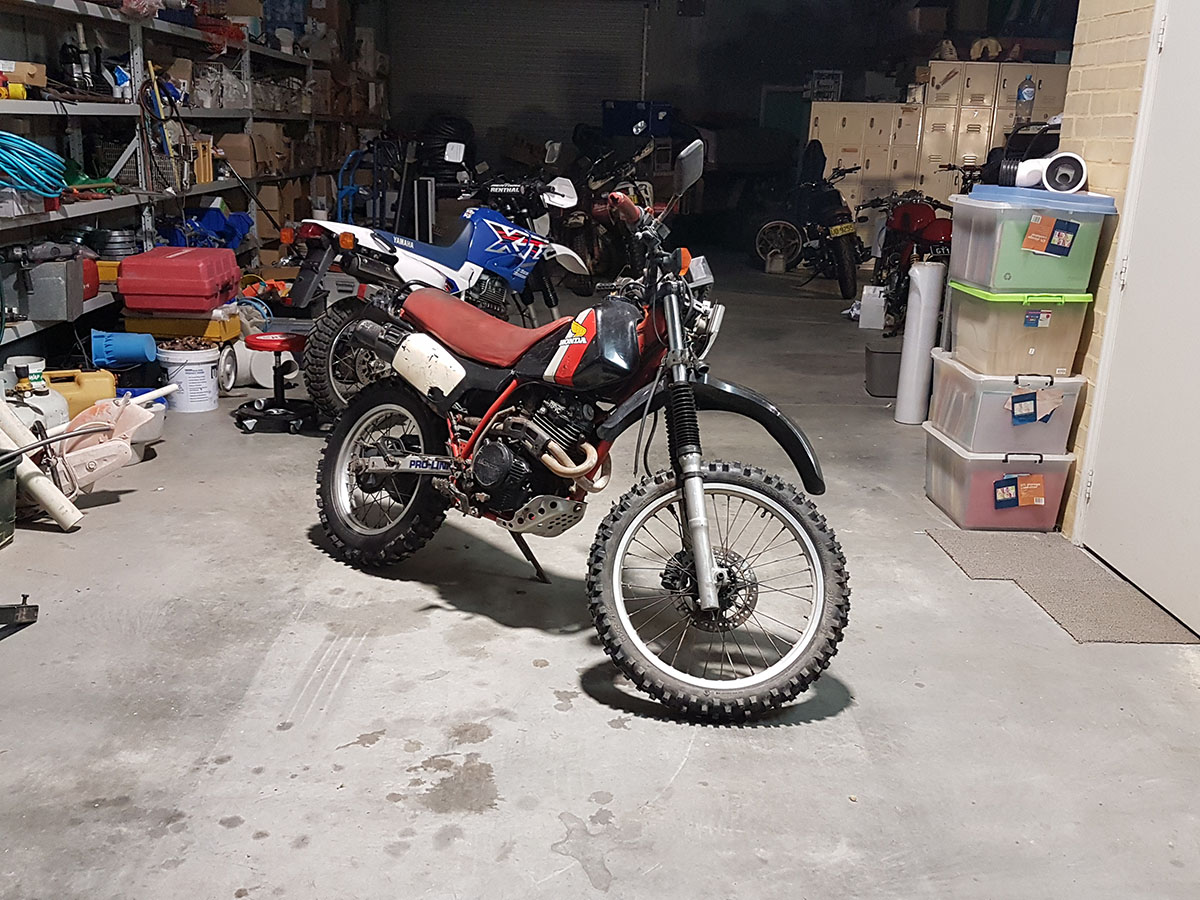 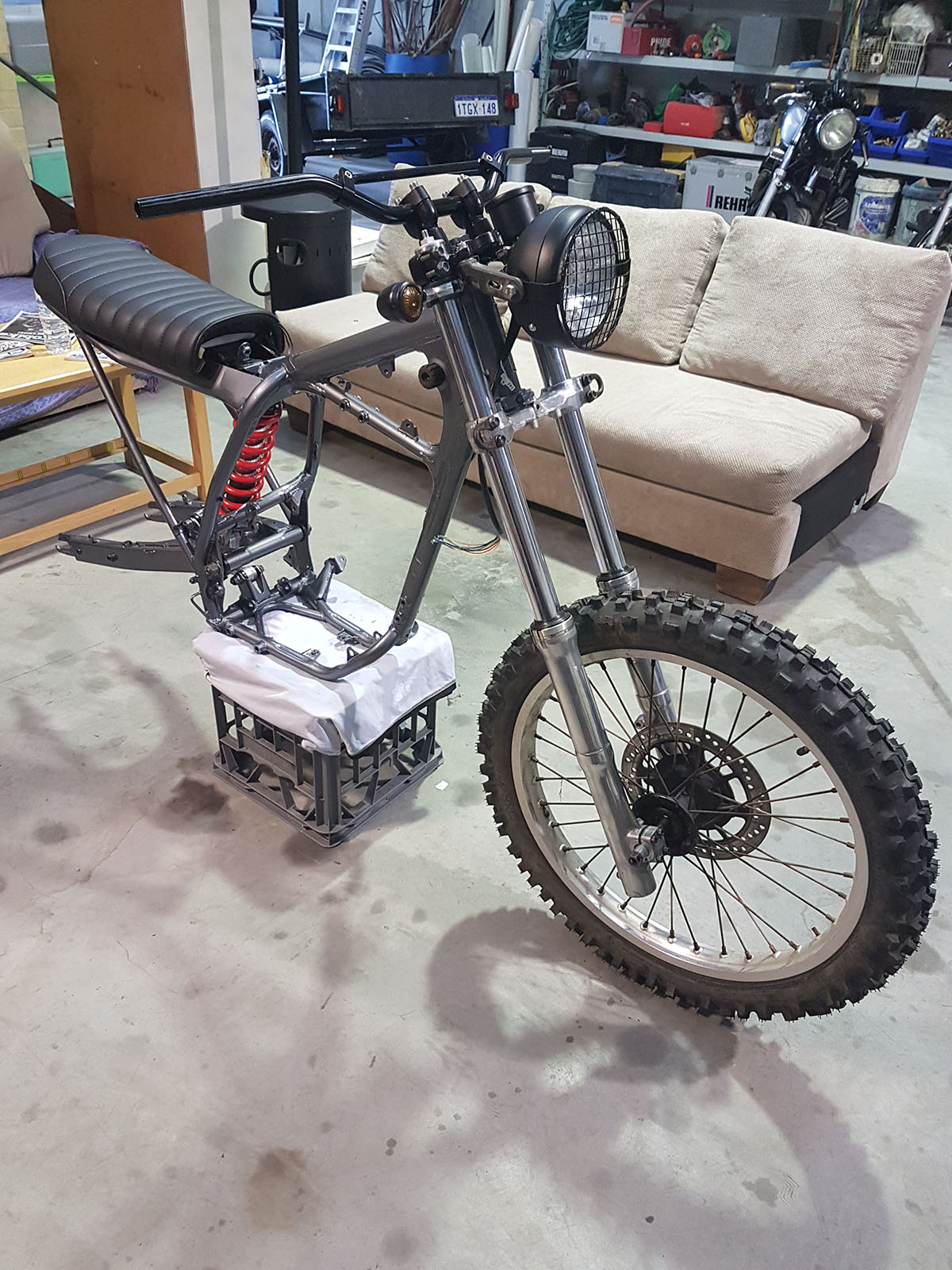 So, like all great ideas in history, this was born from a few mates having a drink and throwing around some ideas. The bike that would be the uncut marble for this build was a 1983 Honda XL350R. This machine originally was a black, plastic and steel road/trail bike that was covered in mud with an extremely bright red frame. Greg Simm, of Perth Café Racers, had acquired the bike from his brother-in-law, and was going to do it up himself but realised he wasn’t going to have the time, so offered it as a donation. He’s now coming to terms with what he could have created with the bike if he had just taken a few months off work!” 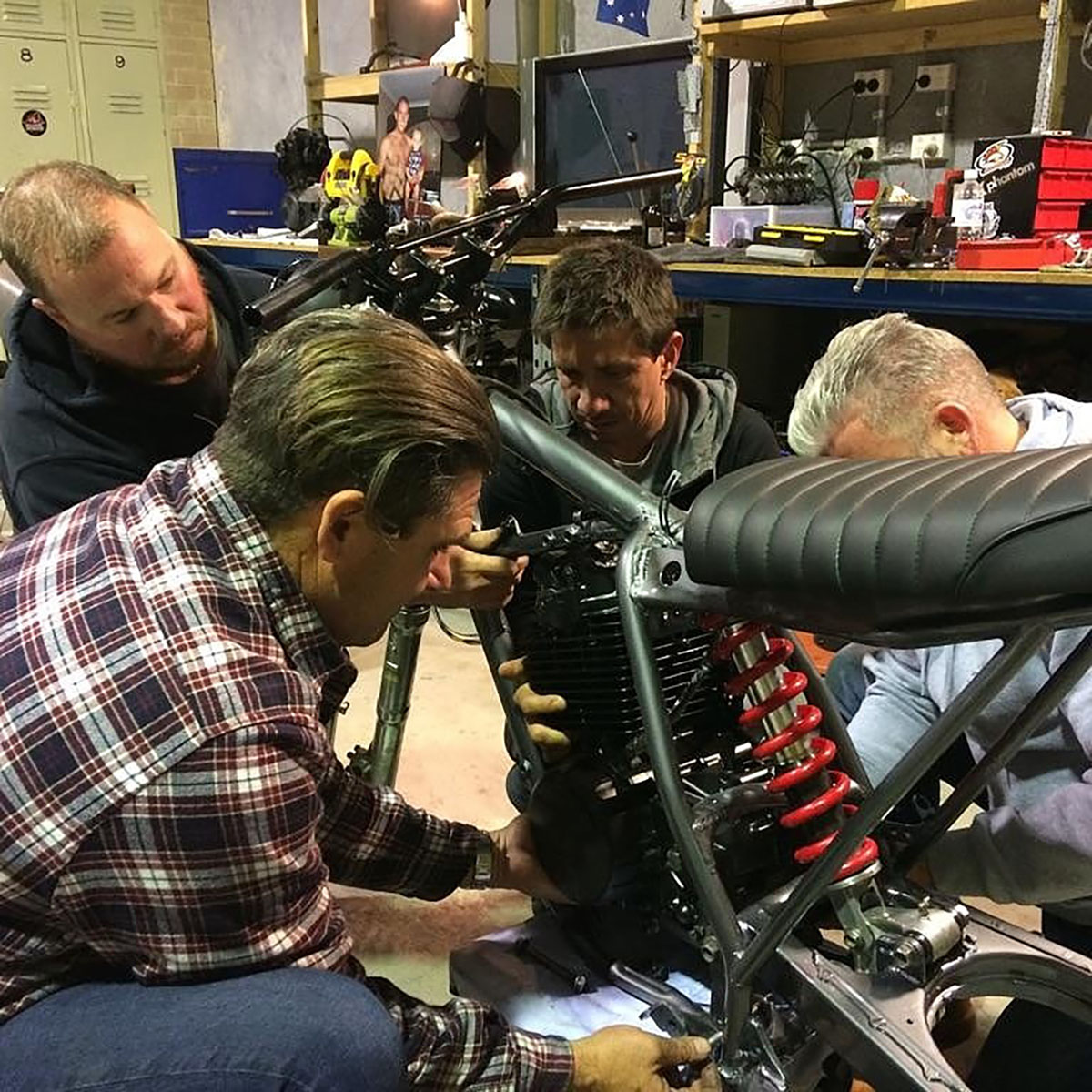 “Peter had offered the use of his factory at Pipemasters Plumbing, and in fact I think we have almost laid claim to the largest portion of the factory for the build. We had to come up with a name for what was trying to be created, and ‘DP’ came up as a result of too many Sailor Jerry’s. This was easily circumnavigated as we all mucked around talking about the guy who does the Racer TV videos on Youtube, and how he constantly talks about the Divine Proportions. Coincidently, this was where we then got the name from. The idea of the bike manifested by the fact that if we were to do community builds like this and provide the opportunity for people to get together, there was also the avenue to support the community directly with mental health issues and cancer research by donating the built bike to aid in fundraising. Hence, this bike being given away to someone who donates $25 to the profile created on the DGR ride this year.” 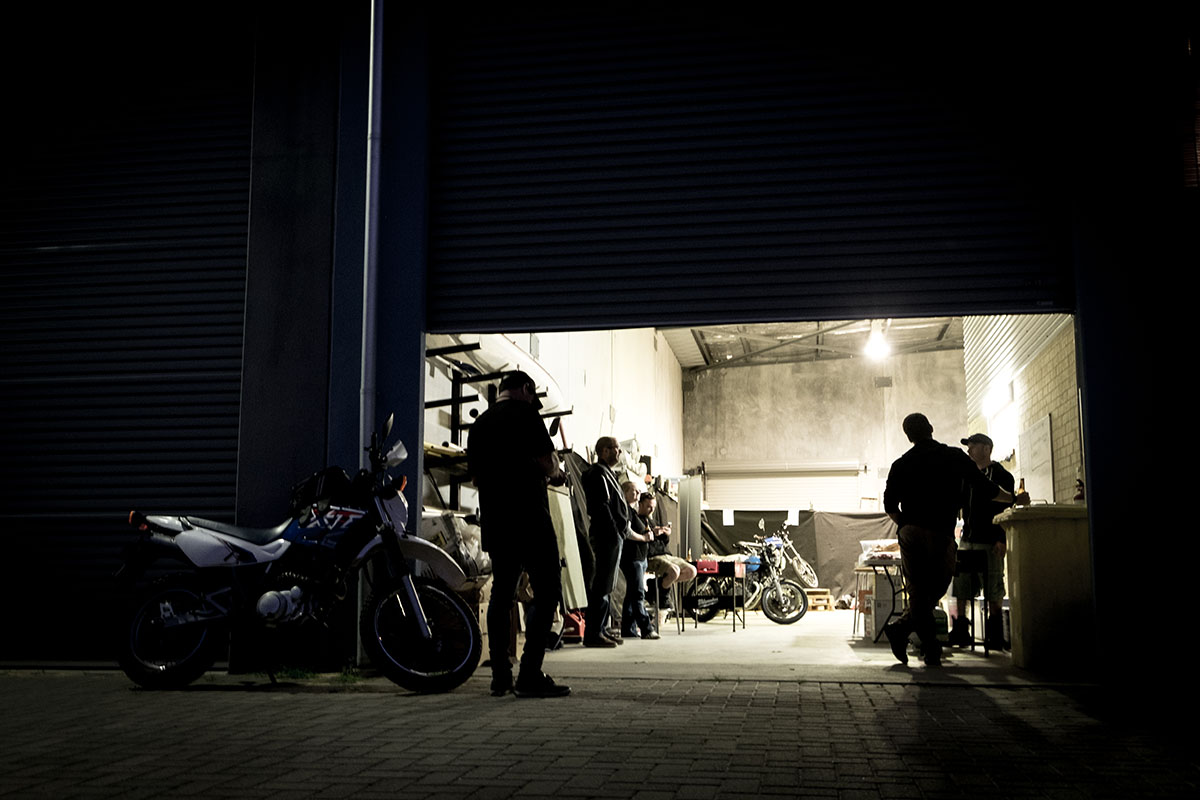 “The build itself was quite scary because the first night I had about 8 very energetic members of the community enjoying the strip down process, talking and sharing ideas while nobody was taking note of what came off where, nor had anybody taken photos of where everything was. I thought this could end up being not-so-good, but in fact it was a great thing because it meant the bike was stripped back to a blank canvas. The only thing that couldn’t be changed as far as I could see was the red rear shock, as any painting would result in cracking and peeling.” 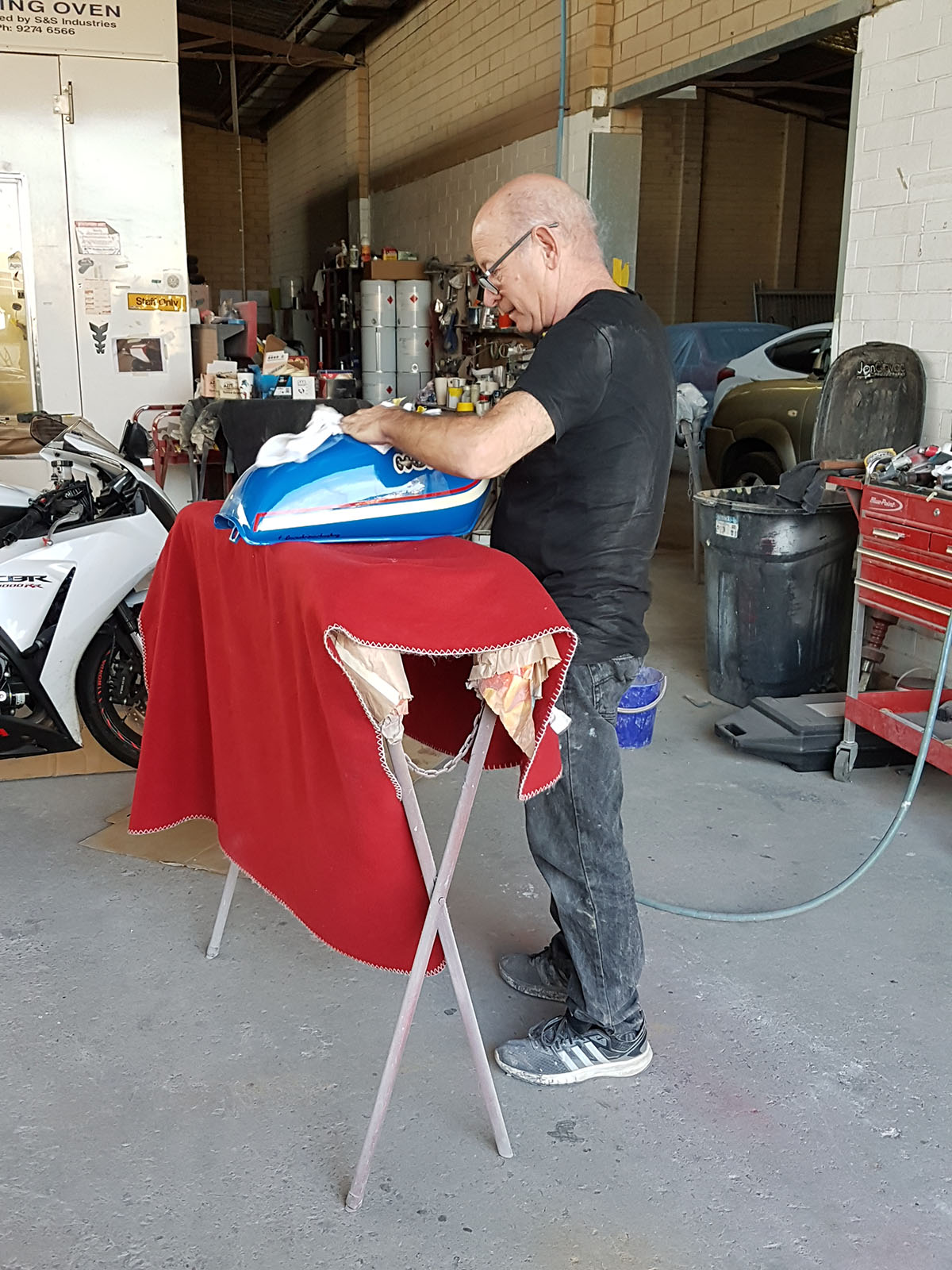 “I had a vision of the design of the bike, and the challenge in my eyes was how to make this mono-shock bike look as retro as possible, for a mono-shock bike. The colours changed a little here and there, and when the frame came back glistening it was an easy decision that the only real colour should belong to the tank to make it pop. I was going to embark on painting the tank myself, however Nial Smash at Straight Line 2 Ten, almost hunted me down to offer to do the paint job – and I am so glad he did. He also had his airbrush artist Laura O’Brien airbrush the custom Honda logo I wanted on it for even more of a retro look. “ 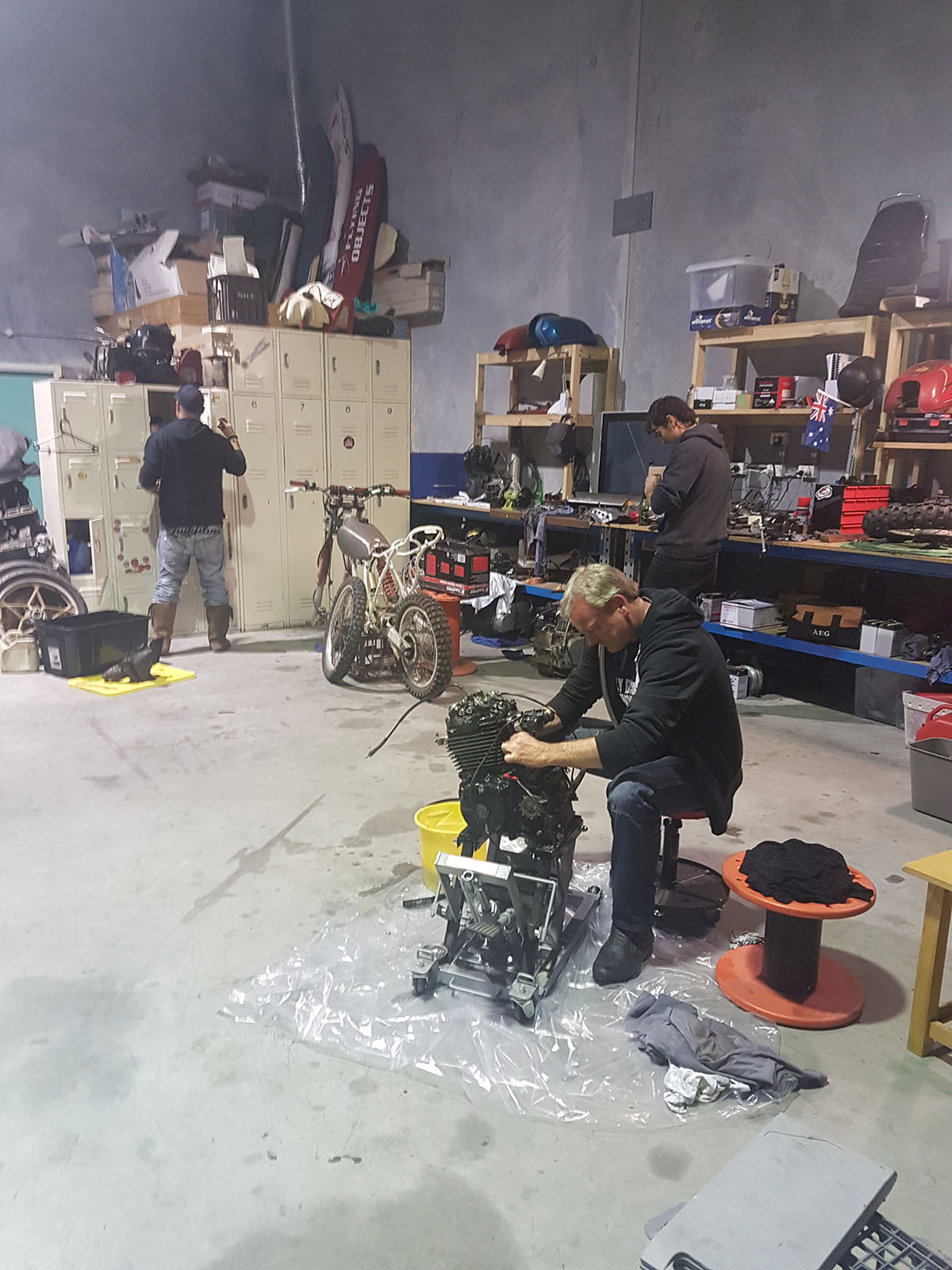 “The other thing was watching new and old parts mixing together. By all new parts next to other parts, there was the danger of the cost blowing out and having to have everything pristine.

I have a bit of a reputation for liking bare metal on bike, and hence there are some parts which have been stripped of oxidation and left as bare metal (with a sneaky coat of 2 pac clear to maintain them for the new owner). By doing this it has been possible to blend the new and old with what has turned out to be a great looking bike.

The bike has had a pretty much a ground up rebuild. The engine has been sandblasted and resprayed, every nut and bolt that has gone back on the bike has been wire brushed and polished. 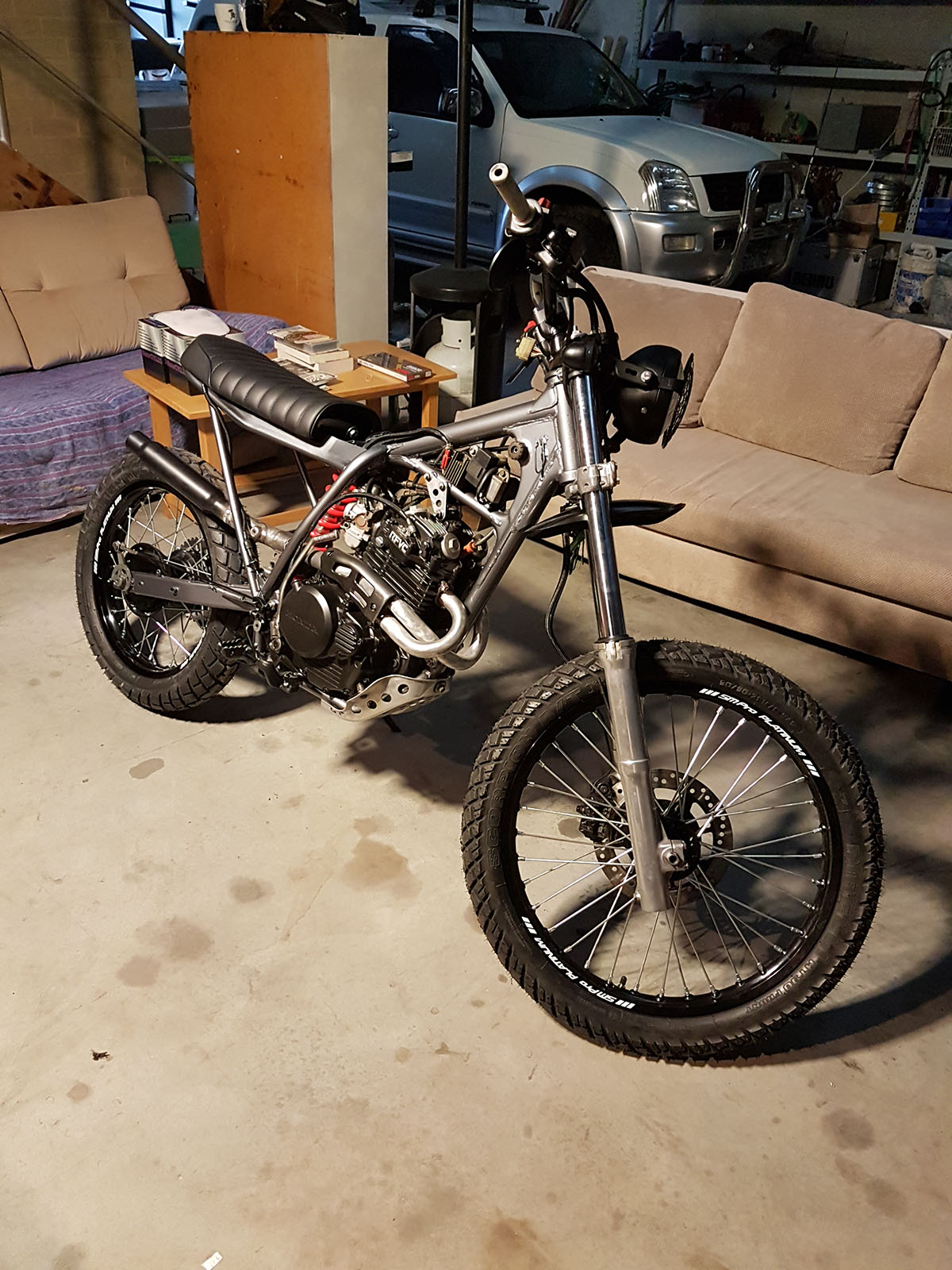 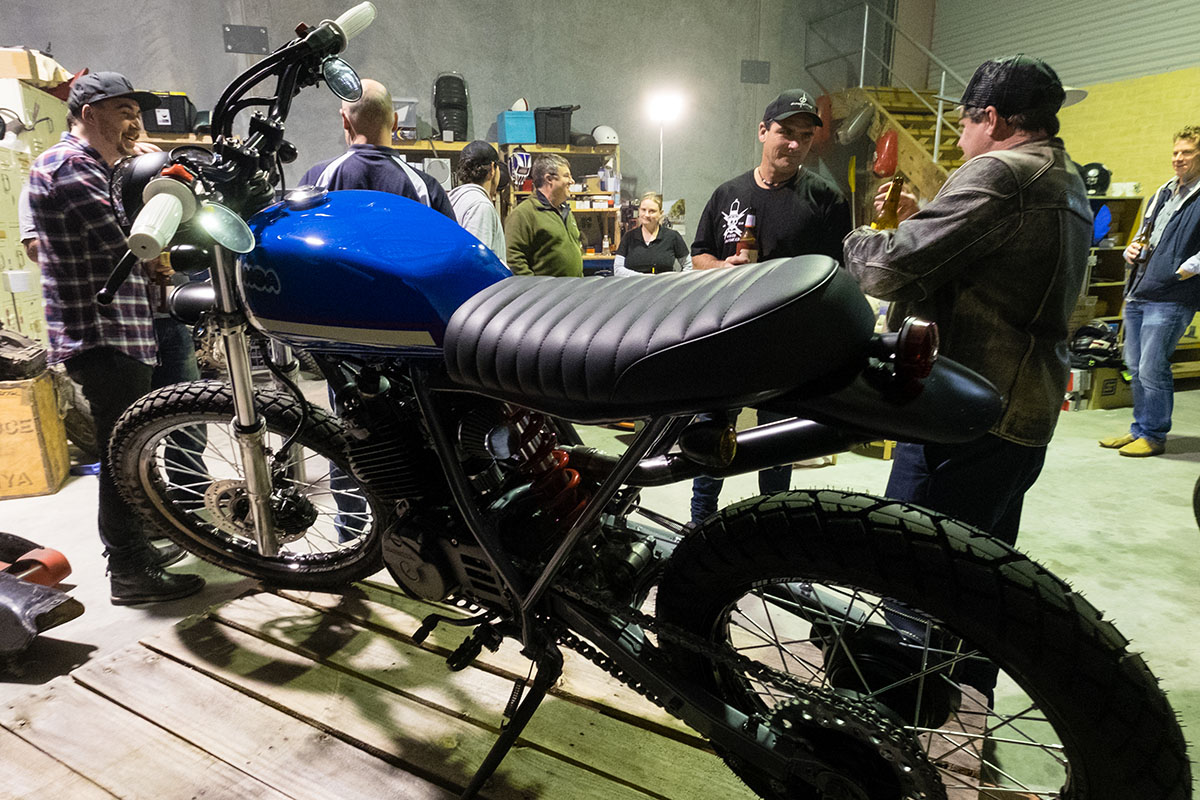 The build process would be a community driven one, with the success of the project coming down to the kindness and support of local businesses. “The build became a huge success thanks to the many sponsors who came on board. The frame was sandblasted and marine grade two pac wet coat for both the colour and the high gloss finish. This was a huge donation of time and materials by Nostalgic Restorations, who also sandblasted and two pac coated the wheel hubs before being rebuilt with new custom size rims. Reece Plumbing Supplies came on board and donated the cost of the new rims and spokes, along with a new set of Pirelli tyres. Billy Kuynen at Rogue Motorcycles donated his time and fabrication skills to create the custom under tray, and Scott Heckingbottom at Retro Moto Co is going to do the final tuning of the bike and carbs before heading to its new owner. Other companies have helped out to provide products, like Gage Roads Brewing Co and Herdsman Liquor Barons who donated product so that we could fundraise at the unveiling to cover the cost of the new parts.” 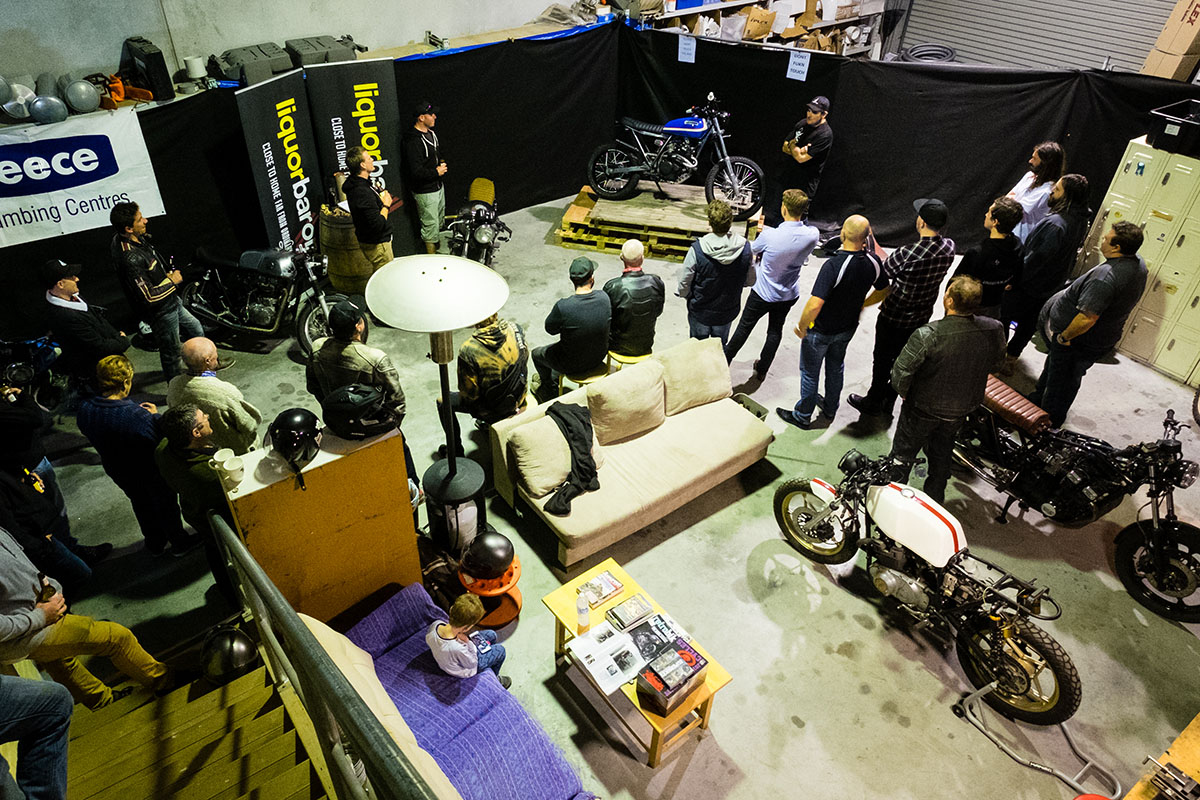 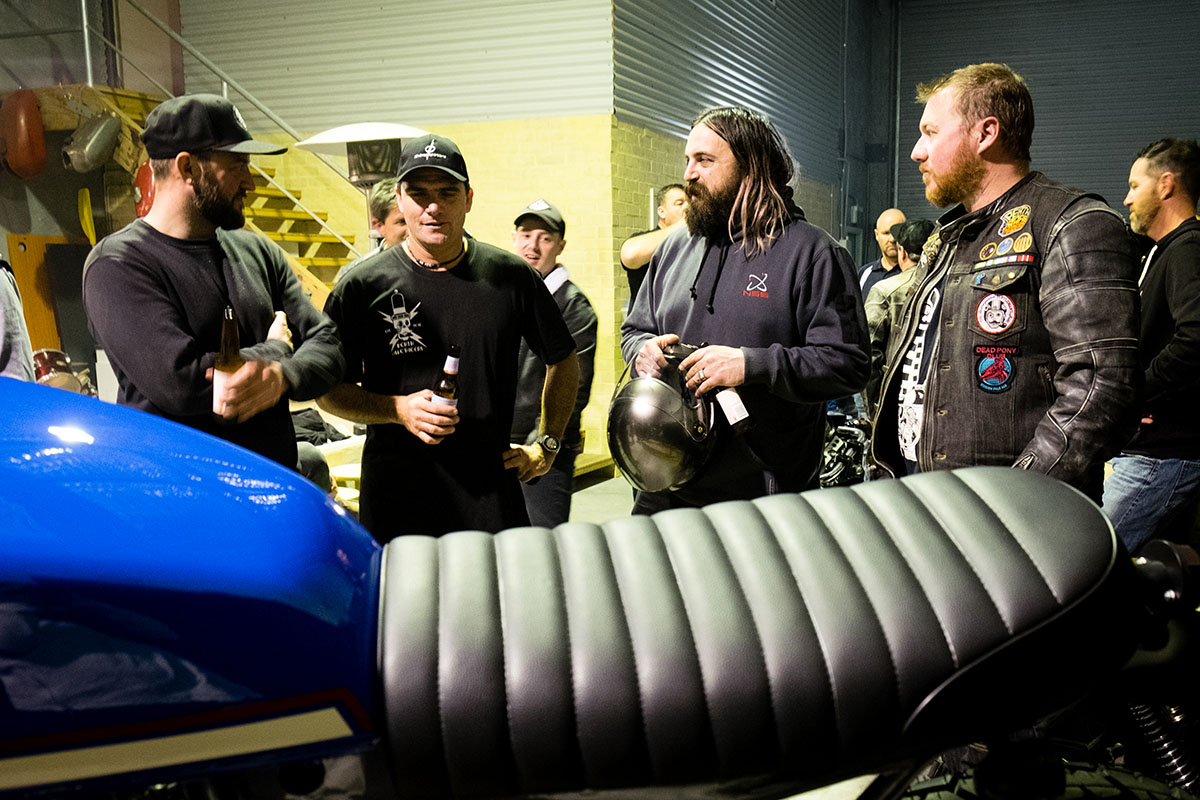 “Everybody that has worked on the bike has agreed that it was not expected that we could produce such a great looking machine, and what will be an extremely fun bike for the new owner to ride. It has even had offers of purchase outright, but where’s the fun in selling it to someone. I am looking forward to the surprise someone will get when they are told that the bike is theirs for donating to a great cause.”

To donate $25 to the cause and go in for a chance to win this magnificent machine, CLICK HERE 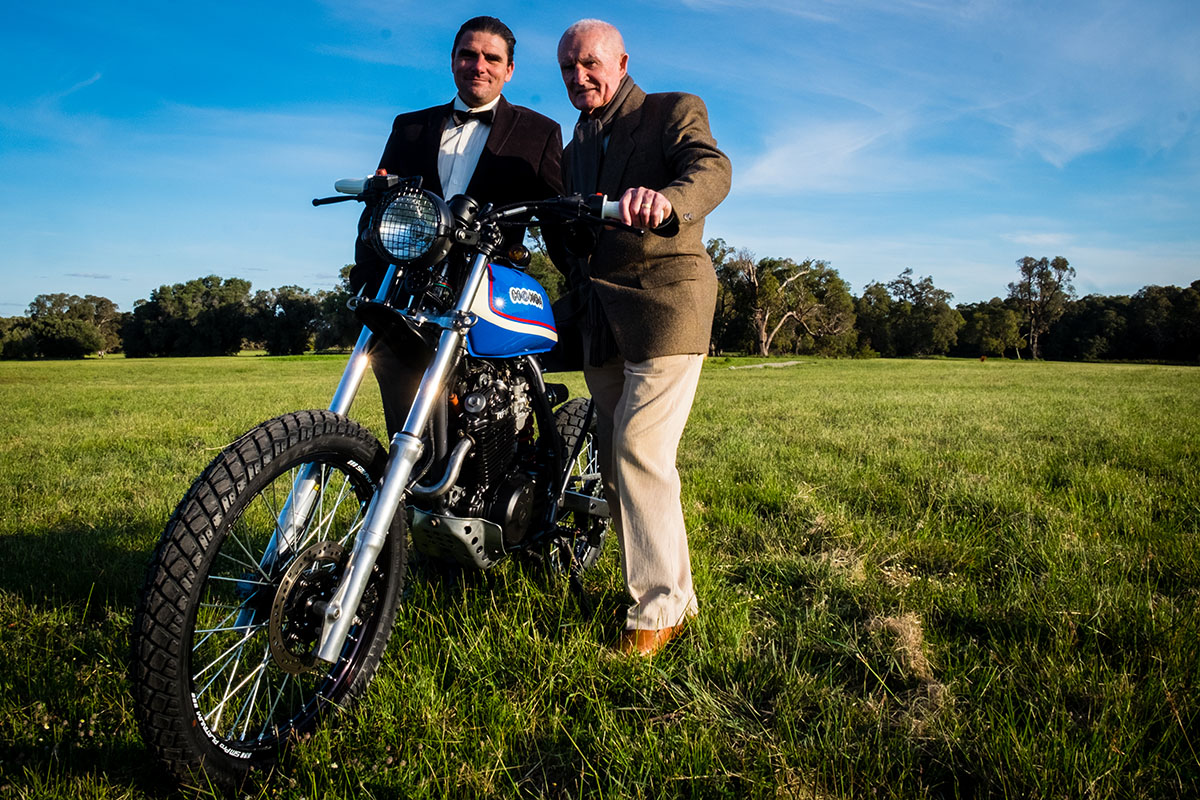 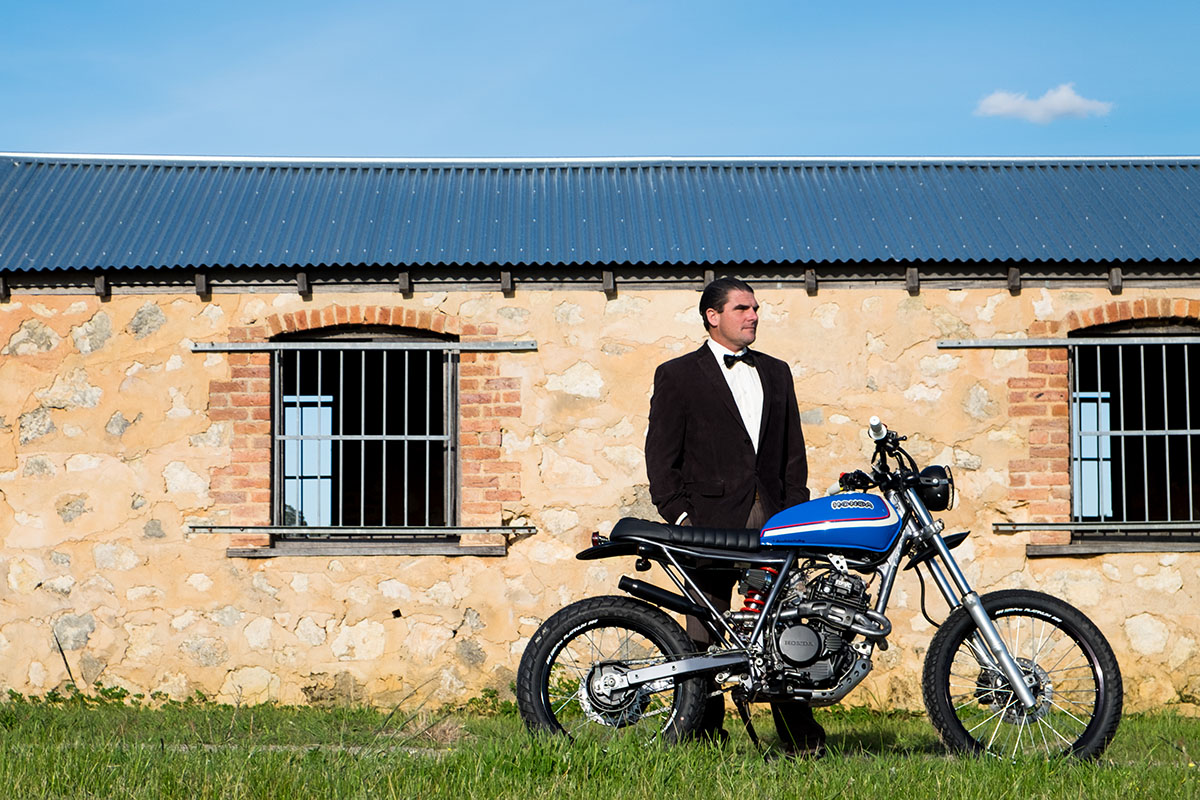 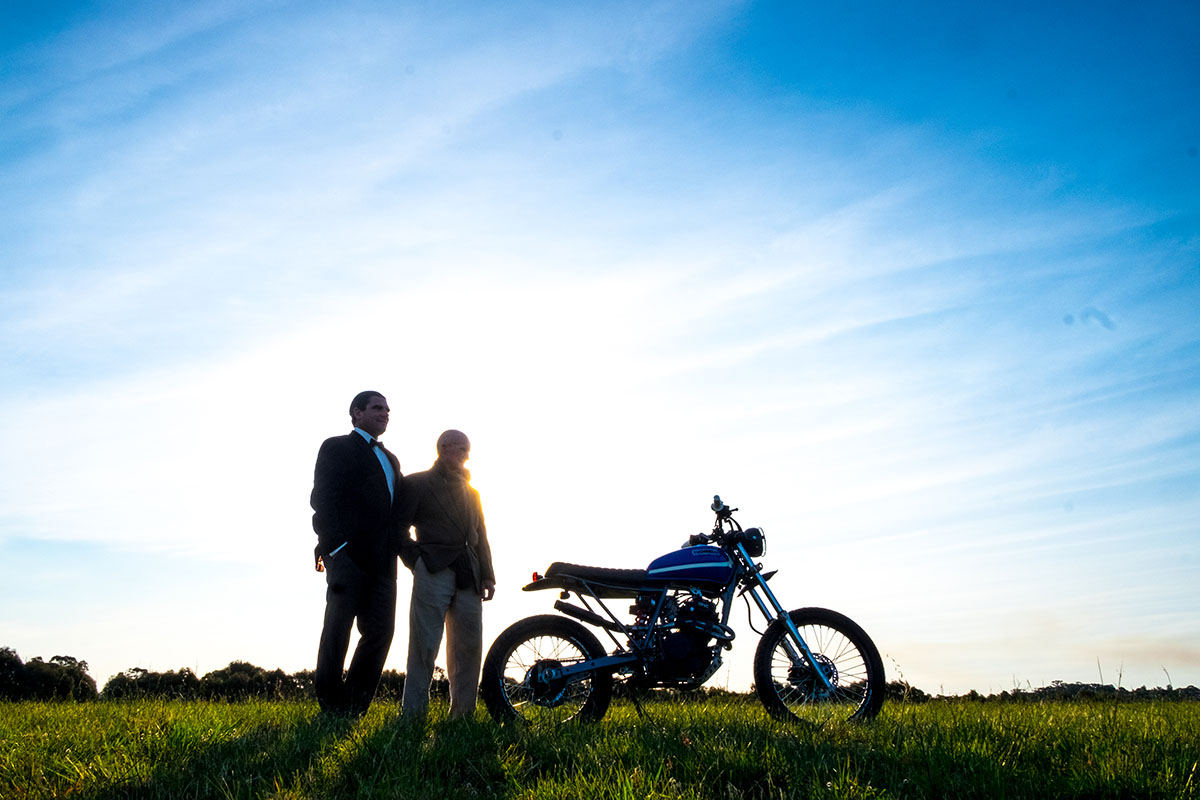