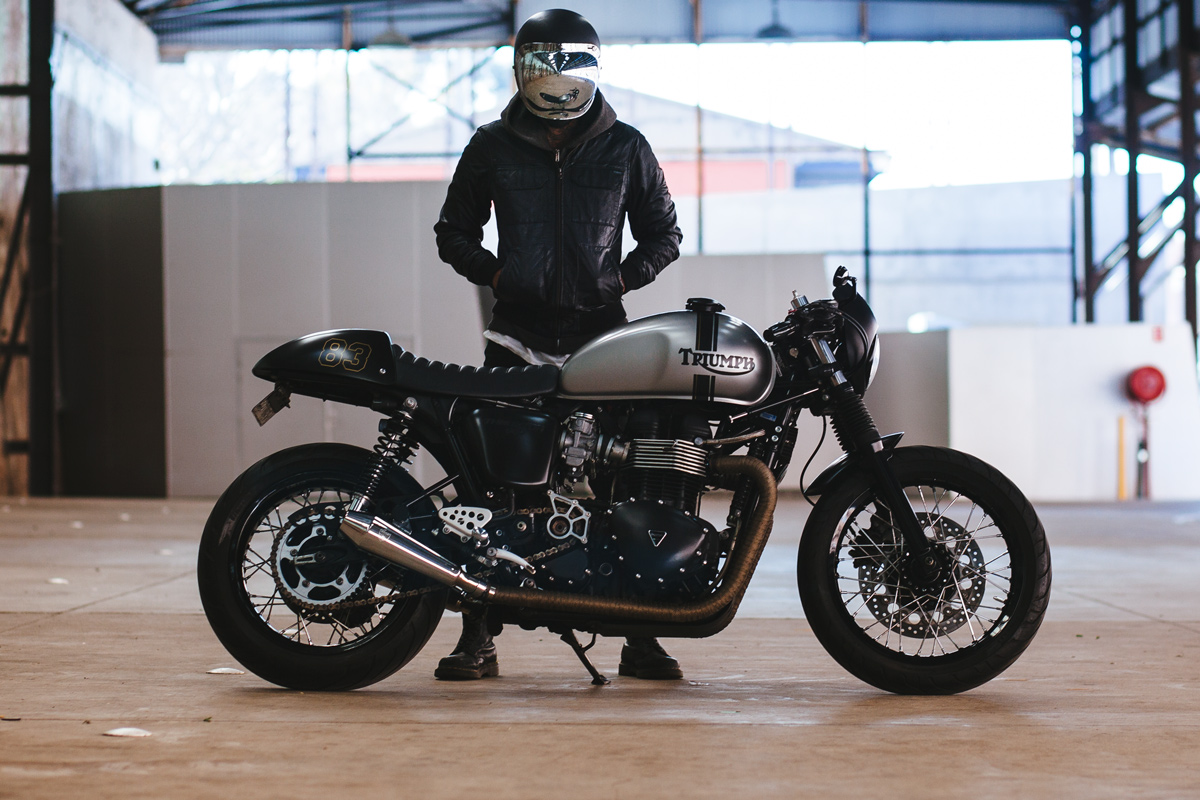 Despite the love for his 1976 Yamaha XS360, Andre was haunted by the need for a new bike; something bigger and more recent. With ideas of Triumph Bonnevilles, Scramblers and Thruxtons battling in his head there would be only one victor.

Freedom, expression and adrenaline are the crux of Andre’s personality. When he’s not riding or working on bikes he’s either on stage or in the studio. “Music is my life. Sex, Drugs and Rock ‘n’ Roll baby, has always been and still is, professionally for 15-20 years. I am 40 and still lovin’ the shit out of it. I’m mainly singing, playing bass, writing and producing. I’ve toured and played with so many amazing artists.”

As well as running LAB 11A recording studio in Marrickville, Andre now has been fortunate enough to moonlight at Gasoline Motor Co. “I’m able to work in both industries that I love, sharing experiences and advice to anyone who will listen to me talk shit, and boy can I talk shit! I’ve worked my ass off and sacrificed so much to live the life I love; I wouldn’t have it any other way. Highly recommend it. Now if I can combine my love of tattoos, Mixed Martial Arts and 4WD driving, I will be complete.

Life’s too short folks, gotta taste it all!” 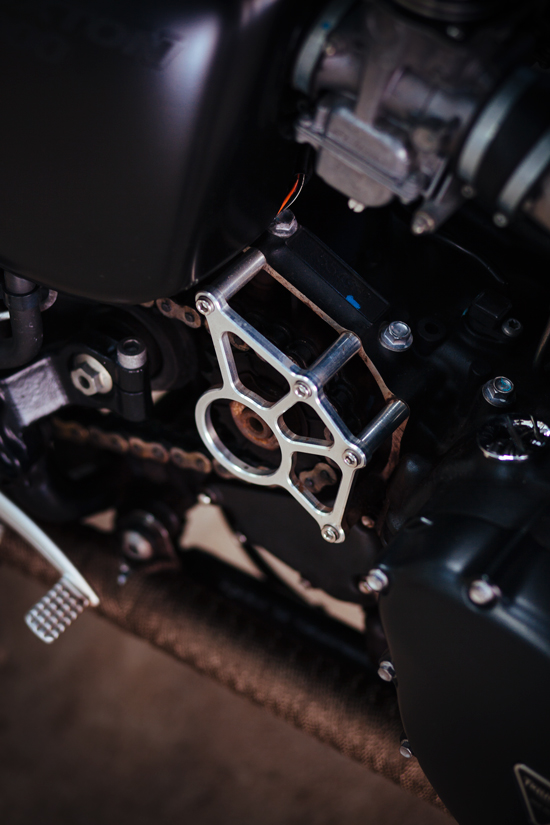 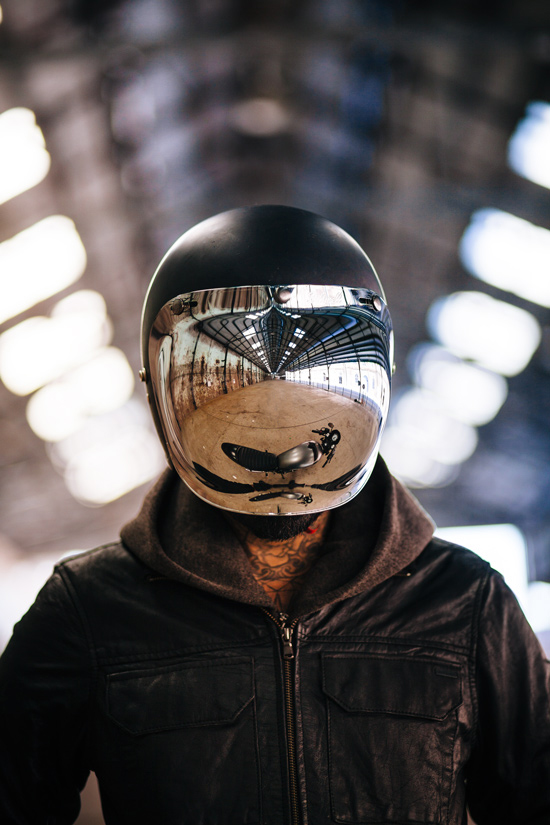 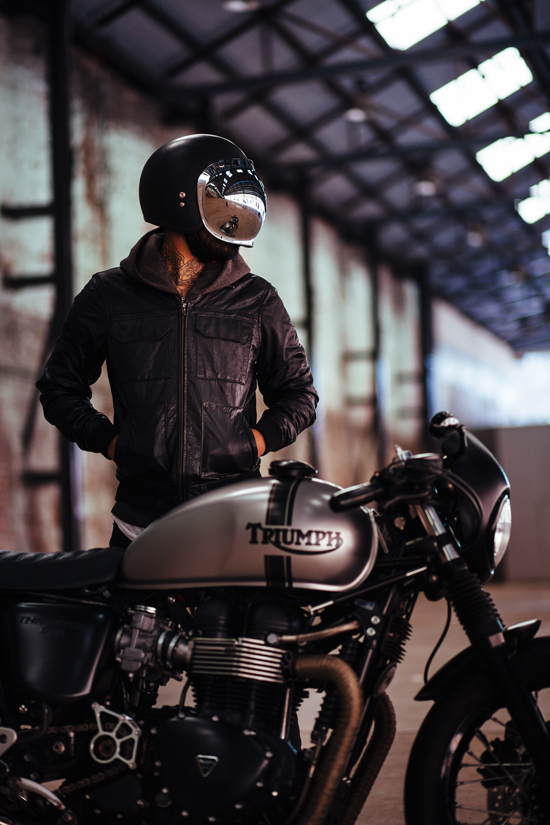 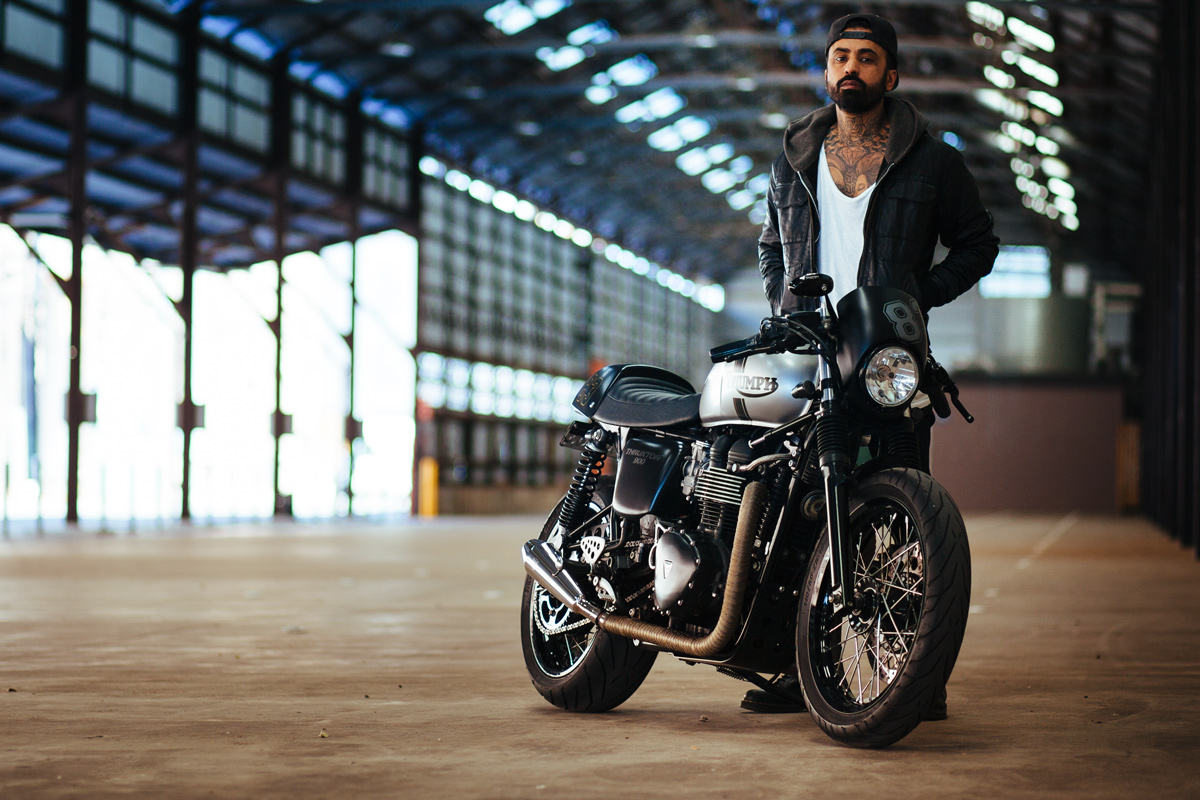 Andre’s current ride is a 2012 Triumph Thruxton 900. “The bike has no name but has been touched by many and like any good hooker, you can call it whatever you want baby!”

“Two years ago I began the search for a new ride; and by new ride I mean one that didn’t take ten kicks to start. Traffic lights, peak hour, throw in some rain and a bike that won’t start, you all know the story. Don’t get me wrong; I loved my old 1976 Yamaha XS360. She was my introduction to Café Racers, SCR and the beginning of an obsession; however I wanted to jump up in power while still staying Café.

The Triumphs were the only newish retro bikes that appealed to me. I checked out so many brands, but would always come back to the Trumps. Then it was the question of which one? The Thrux, Bonnie or Scram? I decided on the Thruxton as I had more of a build vision for that bike in mind over the other two. It took a while to find the right one, low k’s, mint condition and a good price. Thankfully, much to his regret, I found an SCR member selling his. (Special mention to Jbster, what a legend!)”

At the time of purchasing the Triumph, I had both the Yamaha and the Thruxton in the stable; I loved jumping from one to the other with both bikes being so different from one another, yet each having its own beauty and allure. Ultimately, the Thruxton was so addictive that I found myself touching it inappropriately more often than the Yamaha. So it was time to go, for the Yamaha”

After trawling the deep web, Andre had enough inspiration in his arsenal to get to work on his Magnum Opus. This bike would have its fair share of tributes to older bikes and more retro stylings; but still with many modern features and fresh ideas. Lines that flow, a focus on symmetry and a balanced contrast of old and new. Aggressive where it needs to be, reserved and refined where it wants to be.

“Not long after buying the Thrux, I had more mods added. I went through three different bar configurations before I settled on the Woodcraft clip ons, which provided an impromptu perch for my single mirror location. I wanted something different to bar ends and huge mirrors perched over the controls. The protruding piece of tubing from the clip-ons worked out awesome. Love it, can’t see shit, but love the look. Head turn checking skills – Grand Master.” 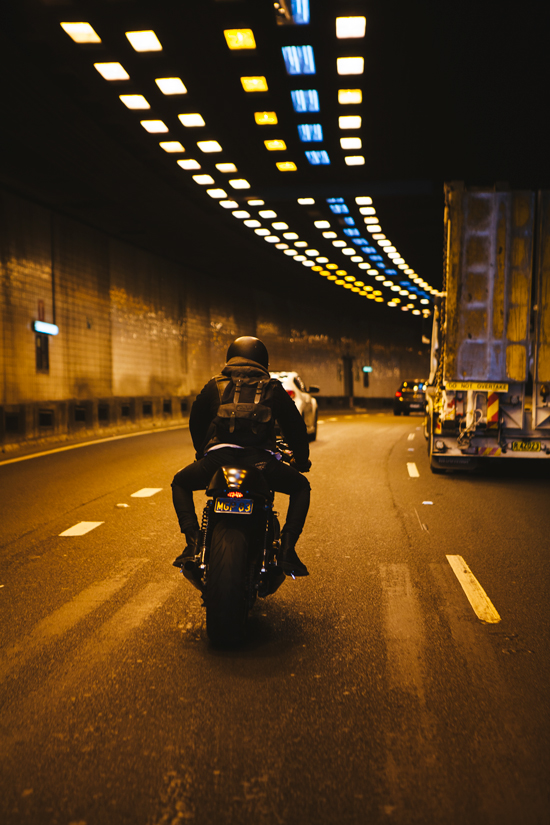 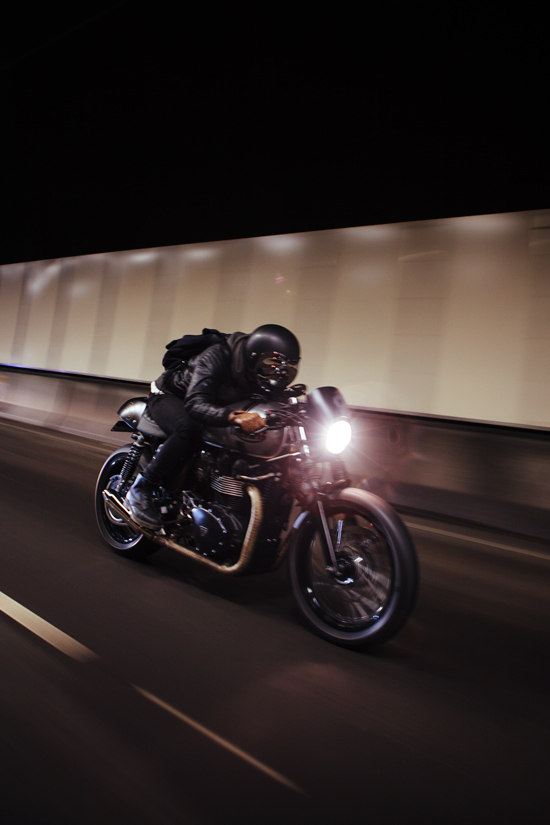 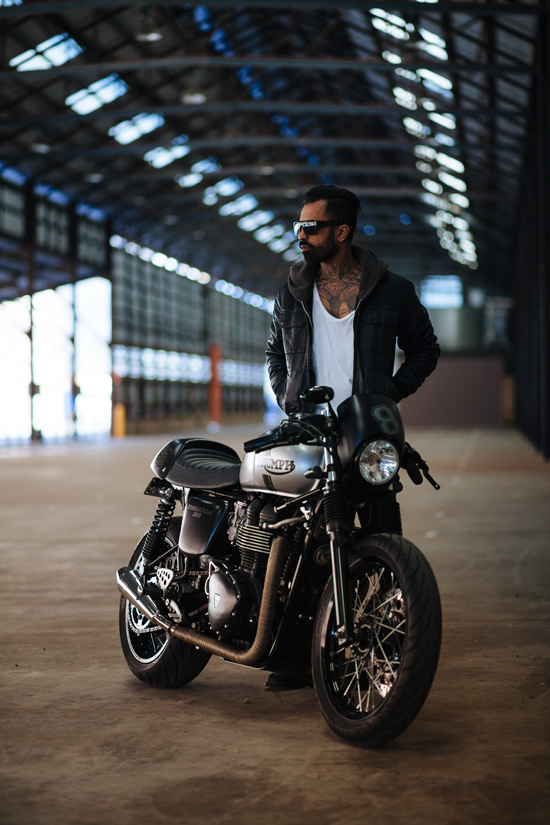 “I had the front end cleaned up, that is, had the riser tabs shaved and painted black from the top yoke and a single mount created for the original speedo. It worked out cheaper and easier just to keep the original speedo. I then got rid of the tacho, as I’m more than happy to hear and feel the red line. Also added a smaller 5 3/4inch Bates style headlight. I really wanted a minimal look to the front end. I had the headlight lowered so the bike hunched forward more and followed the lines of the tank for a more aggressive stance. Not a fan of how high the original headlight sits, to each their own I guess. Chopped front fender, Shorty Pazzo levers (my hands are in love) and posh grips to finish it off. Kyle at Renegade Customs did an epic job.”

“I powder coated the engine covers and fuel cap black after a nasty experience with Plasti shit. Love the black with silver bolt surrounds. I had the original seat re-upholstered by Wall and sons in Brookvale. They did incredible work, highly recommended. I had a flat seat custom made by Kyle at Rene9ade, he did a wicked job, but I prefer the original seat as it masks the angular rake of the sub frame from the tank line, which I’m not a fan of. I prefer it all to be straight-ish; unless its chopped and hooped, that’s a possible future mod.

The tyres were next to go; Pirelli Angel GTs were my weapons of choice. After much research and having to deal with an 110/18inch front and 180/17inch rear, the best matched tyres were the Pirellis. Plus I love the evil eyes tread pattern. I would still like a 120/17inch front, but whatever. Three different mufflers have tasted and spat out the love juice of the beast. First were some aftermarket pipes that came with the bike, and then a pair of British Customs long Predators in black were added before finishing up with the British Custom Shorty Predators. I originally wanted them black, but love how the chrome breaks up the black at the rear of the bike. Sounds throaty as fuck. Braaap Braaaaap!”

“My finishing touches were the steering damper, essential on these twitchy bitches. Then I had the pin stripe, logo and number decals done with help from the boys at Wrapstyle. I went for matte black on the satin tank finish with subtle gold pinstripe on the black pinstripe. It ties in with the negative Varsity number decal on the back, which ties in with the bold gold font of my licence plate.” 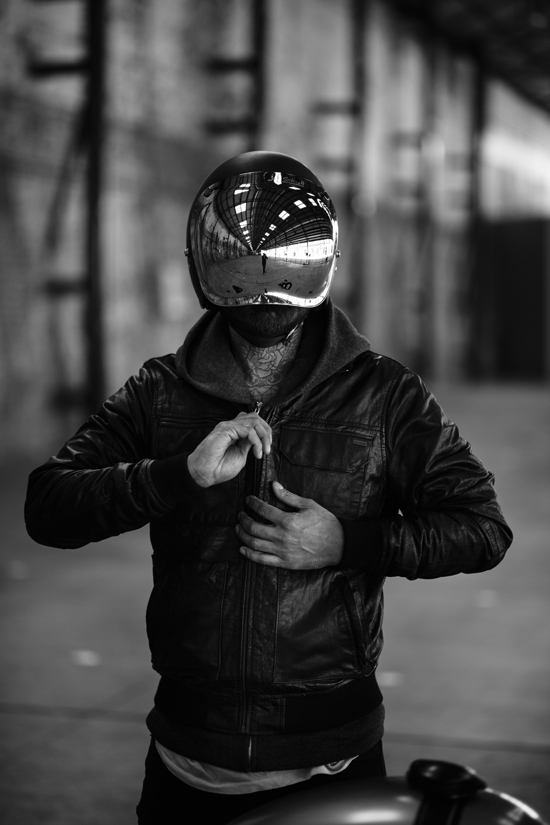 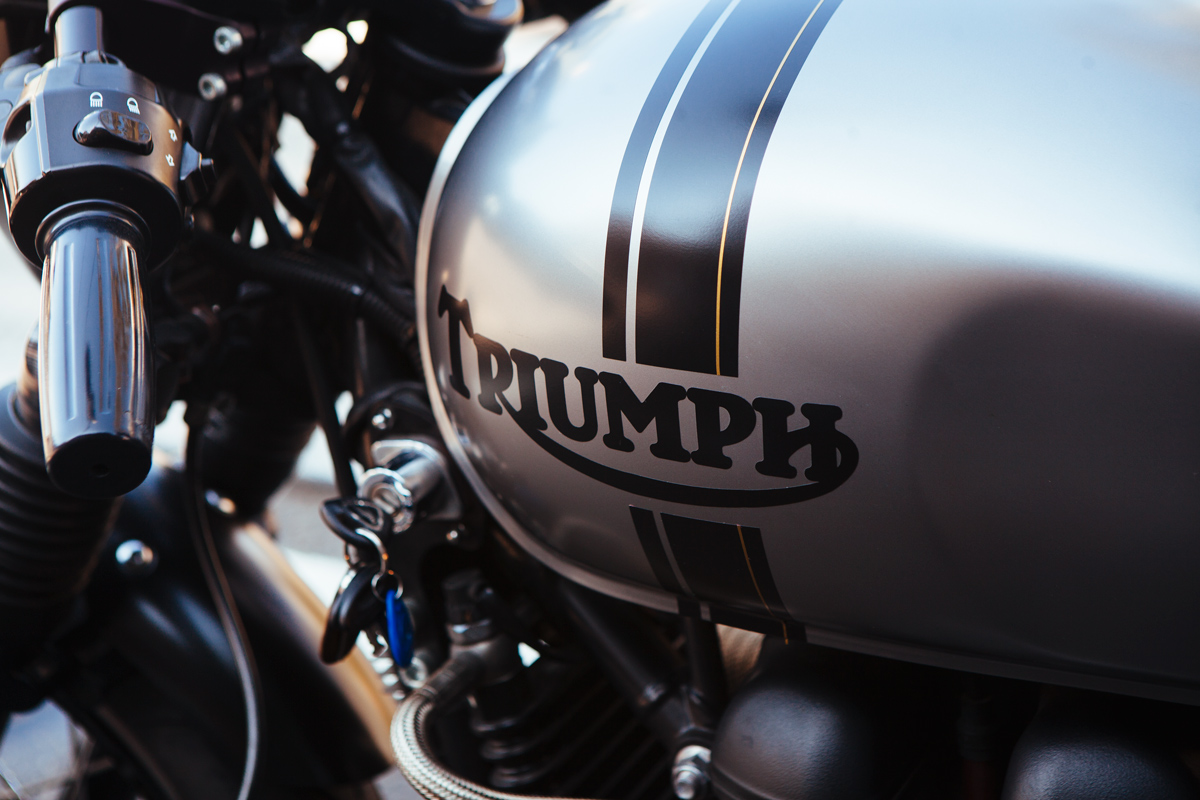 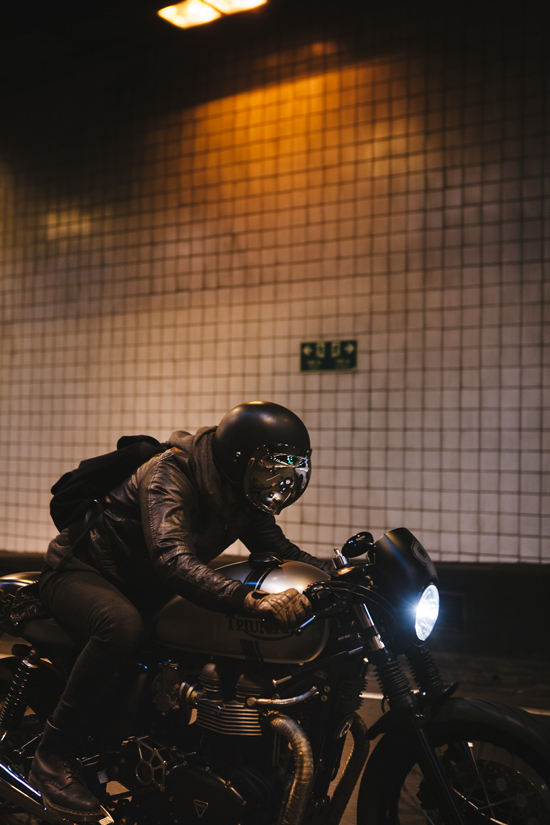 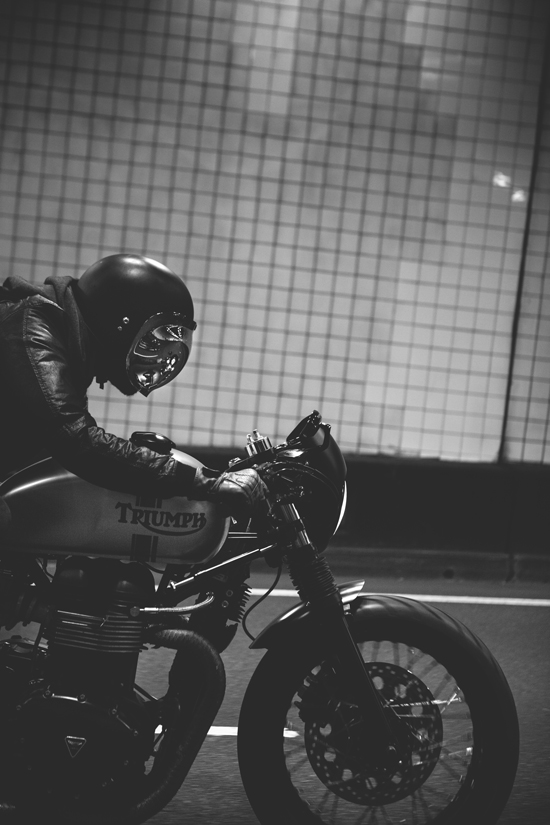 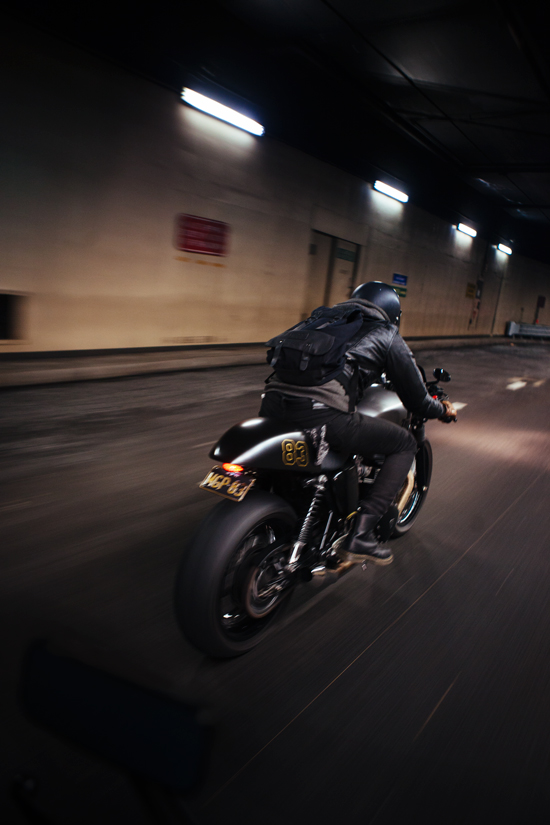 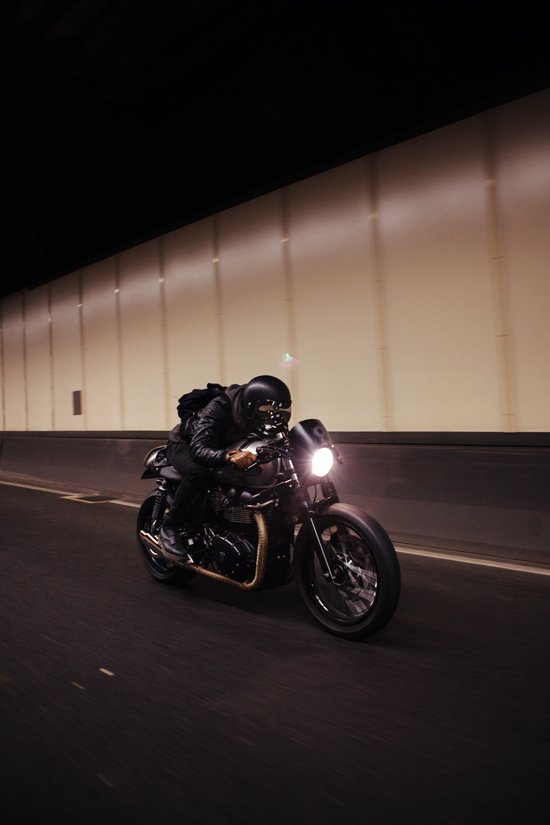 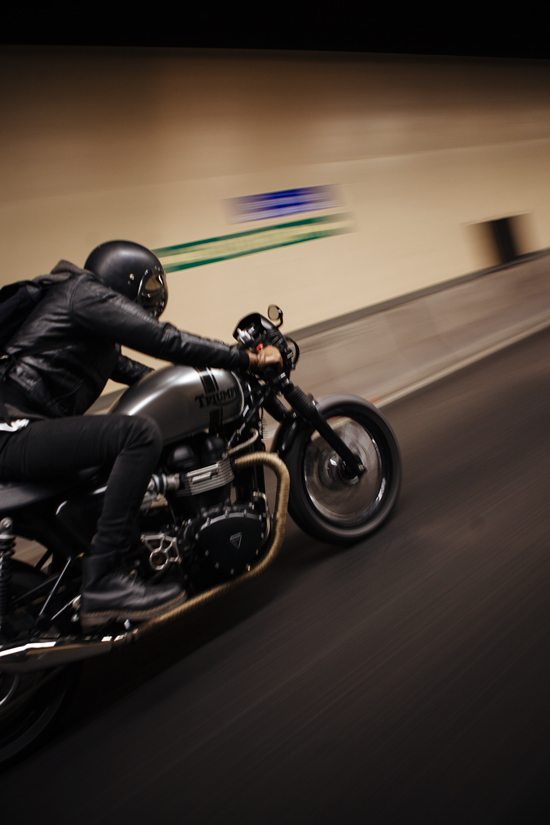 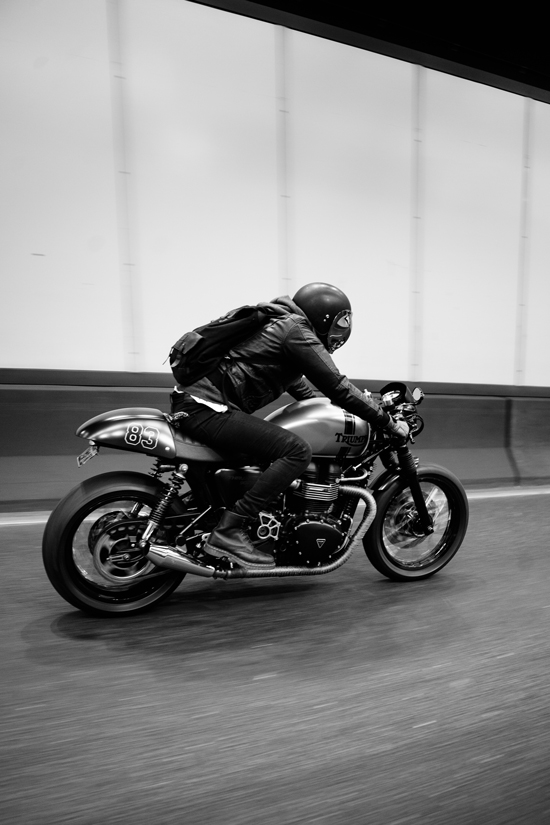 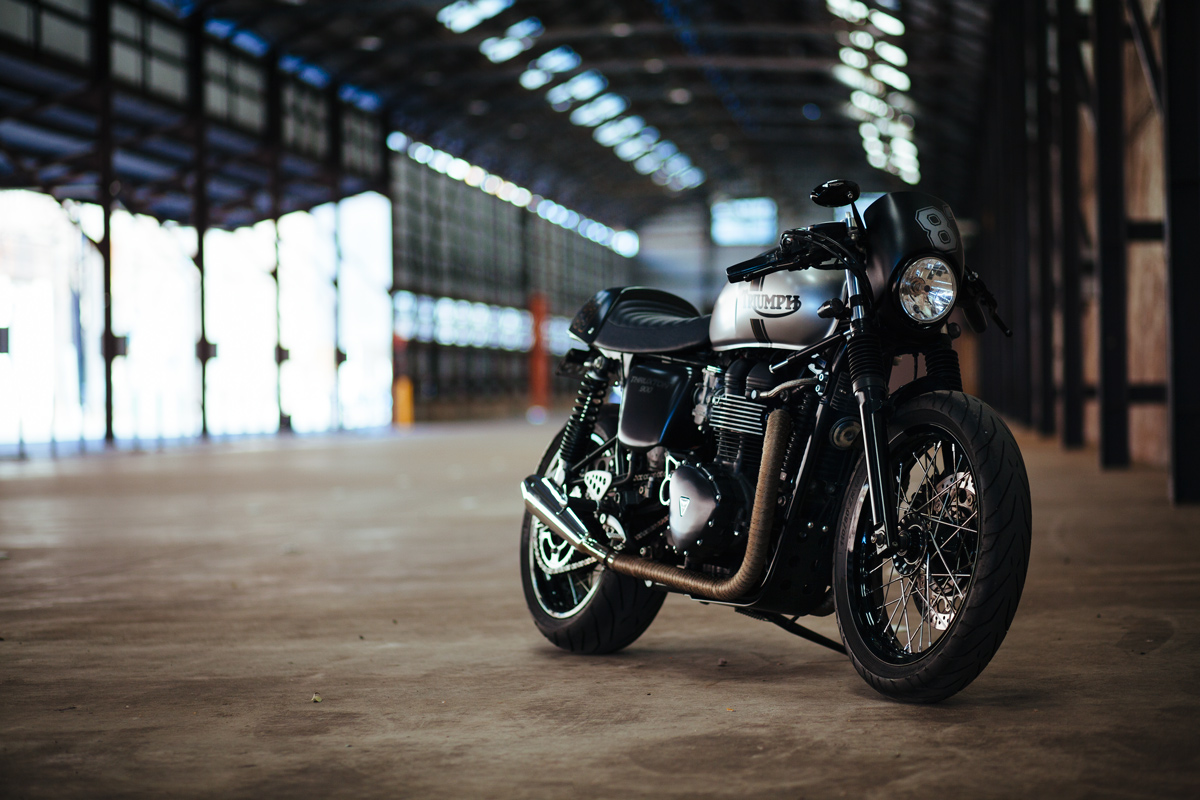 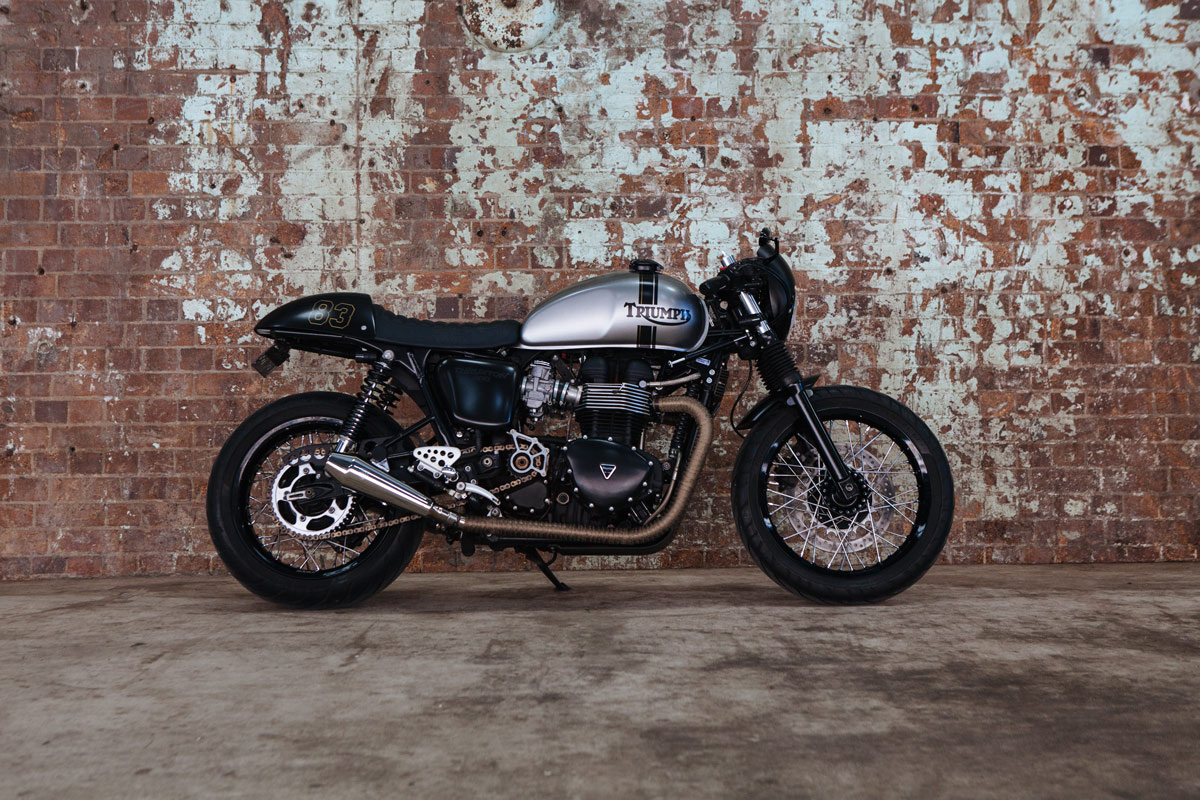 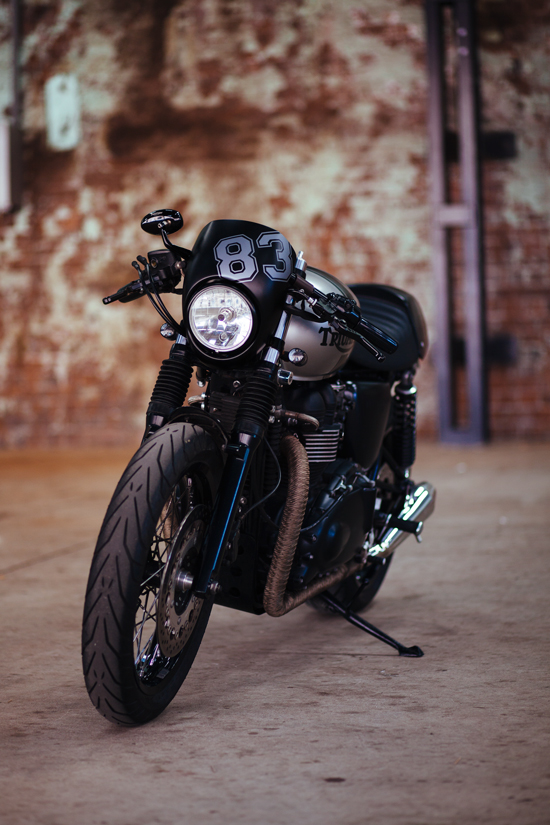 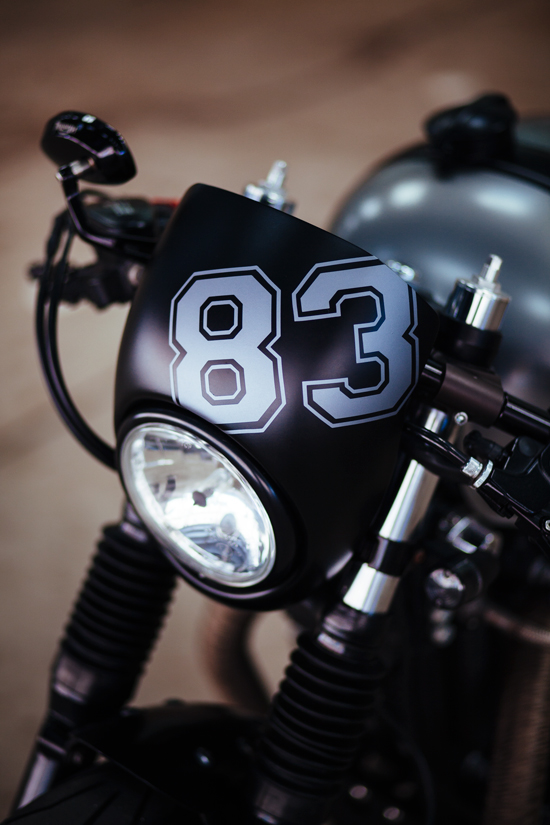 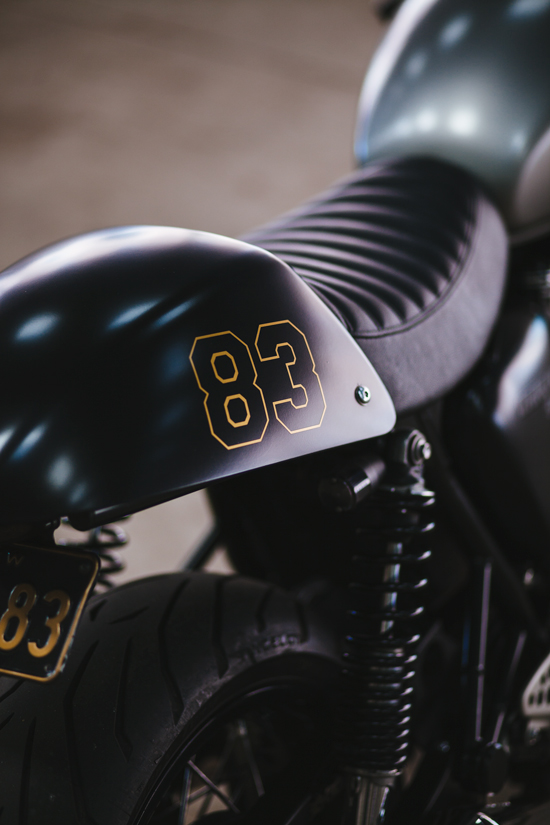 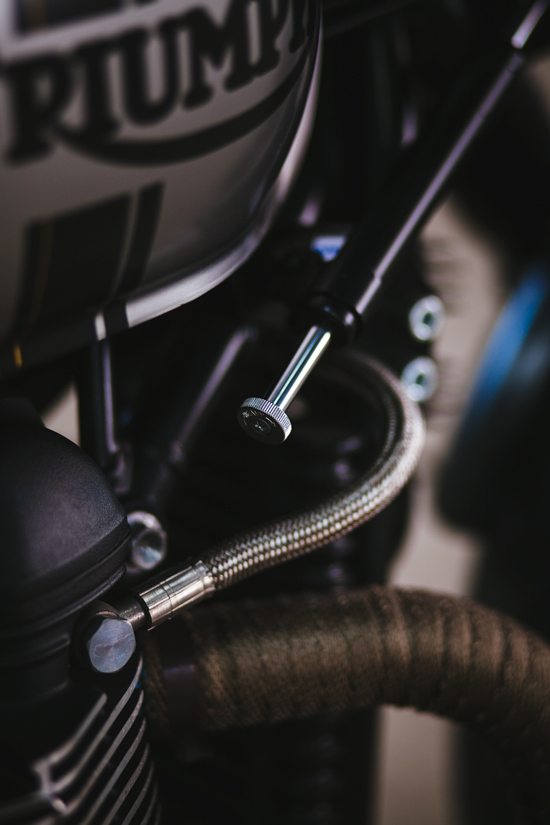