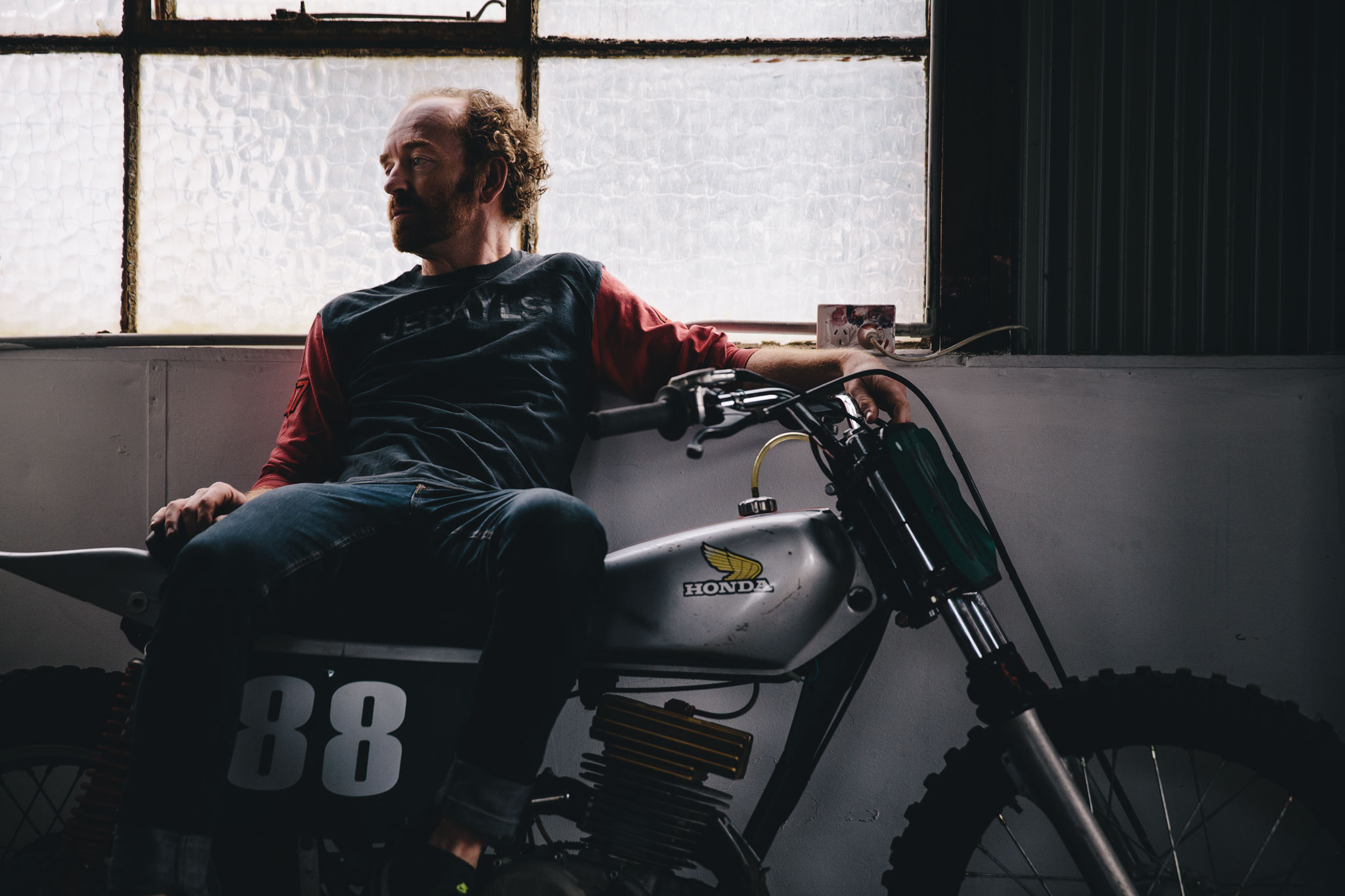 It was back home in Mother England that our resident misfit/Jerkyl/Shutterthug Andy Baker discovered that which would make him who he is today. He was soon evicted from his homeland however, apparently for not doing his share of the dishes, and playing the complete discography of The Supremes too loudly (or so the legend goes). Whatever the reason, vintage dirt track riding in Australia has had a hearty injection courtesy of this pommy rider. 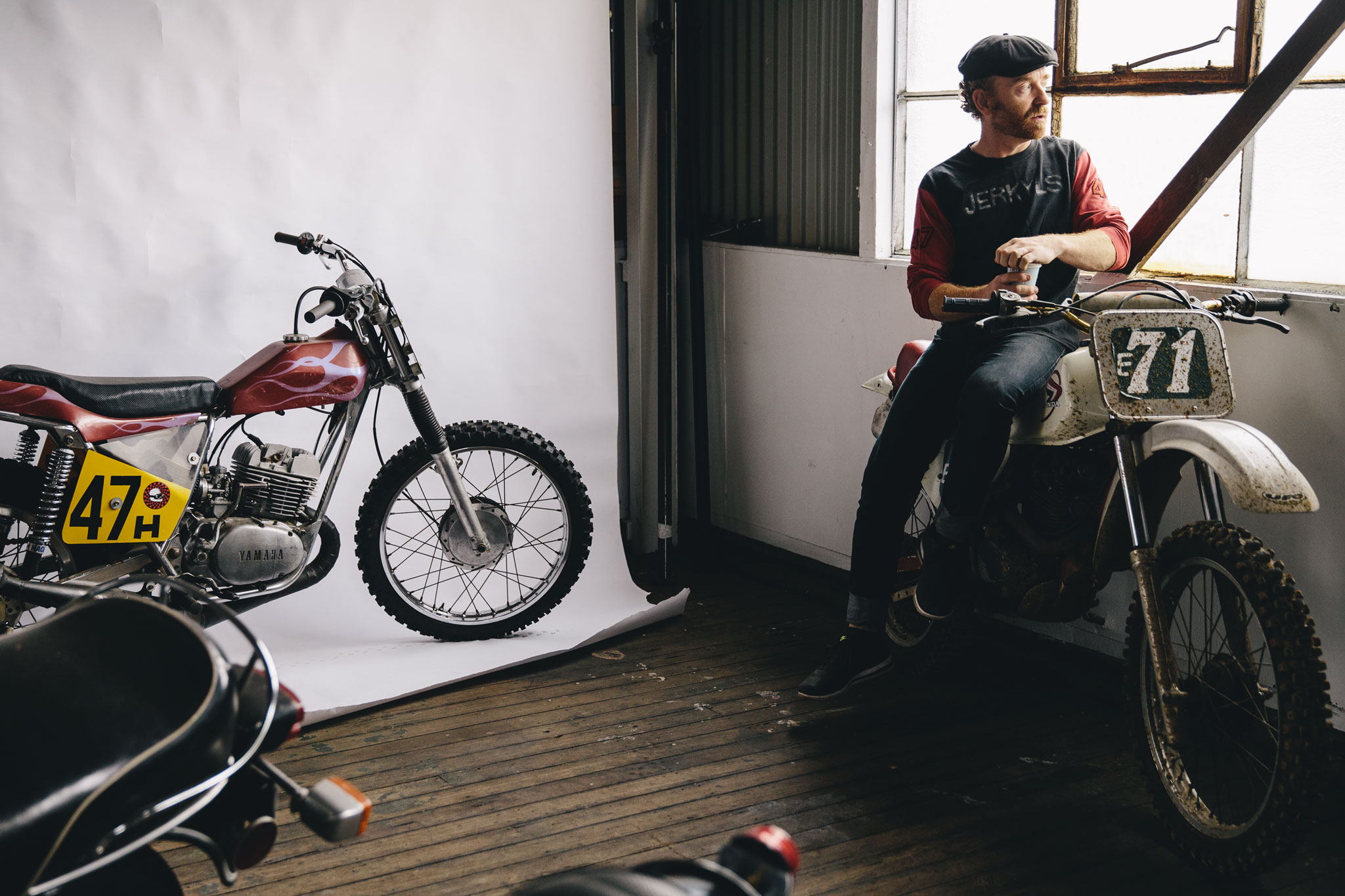 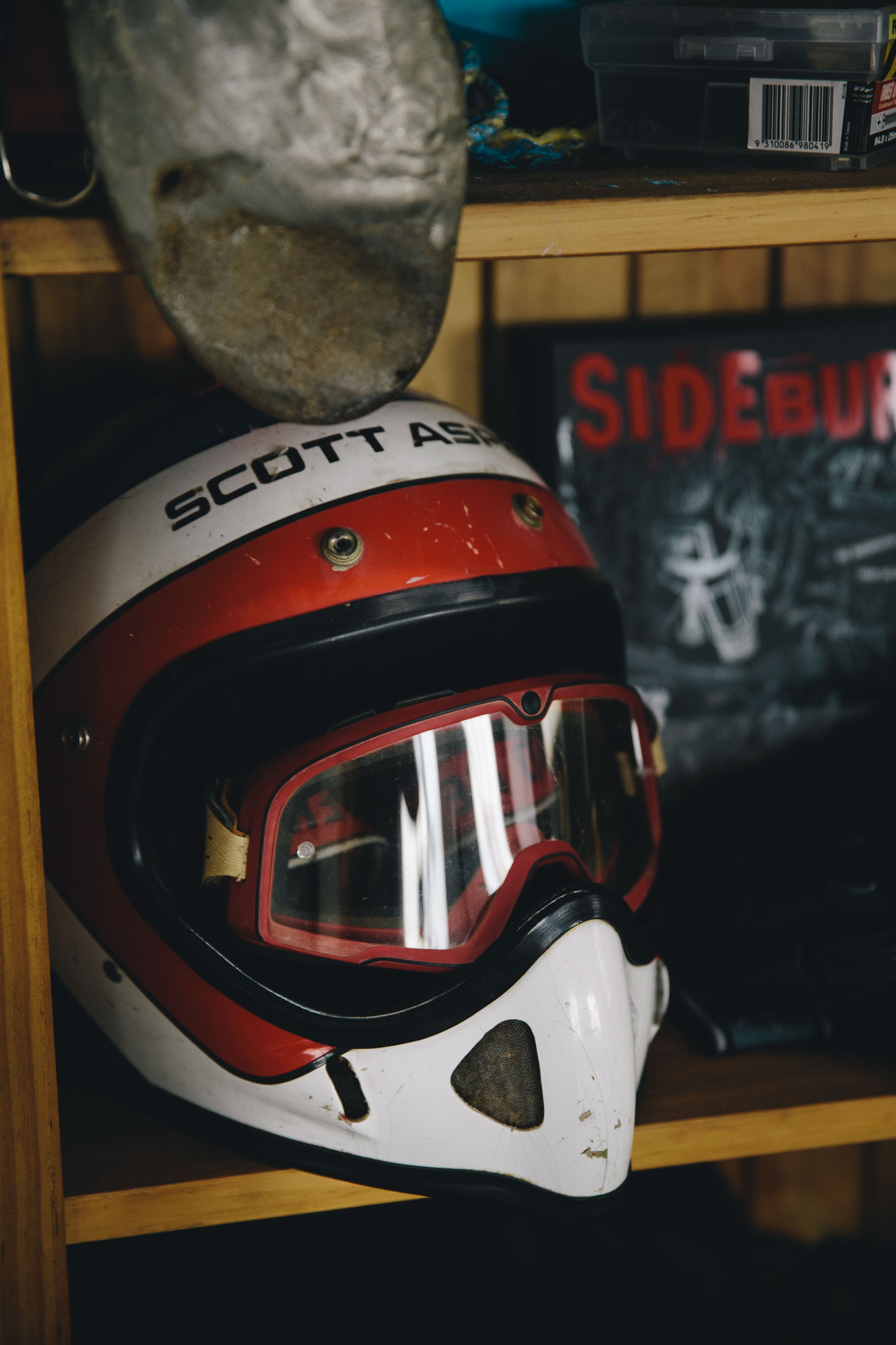 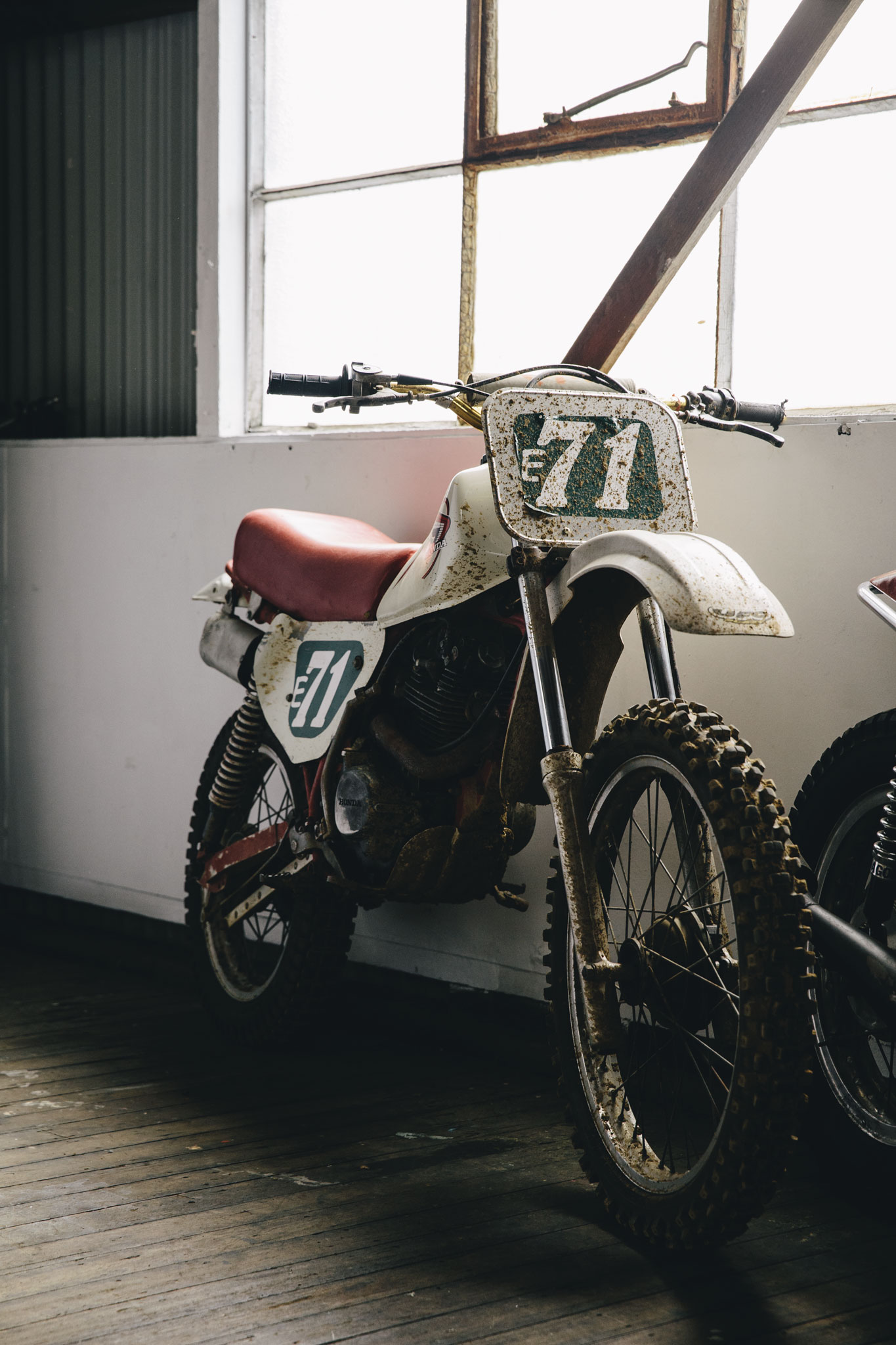 For Andy, it was the early days back home that forged the beginning of his moto-madness. This was a time when cigarette brands were emblazoned on just about everything. One particular soul would be a figure that Andy would imitate in many regards – his uncle Frank. “He had tattoo’s, smoked Marlboros, and made his own bullets. He drove a P6 V8 Rover and was an East-end Jag mechanic. He liked tomato ketchup – and so I did too.” Hanging with that cool uncle that we all hope to one day be would see Andy exploring the garage where uncle Frank built a BSA Scrambler. “I was in awe as I watched the fat knobbie tyres roll around the tiny garden. The noise from this machine upset everyone – and all I could think was “Fuck yeah!” while I was only aged 8.” 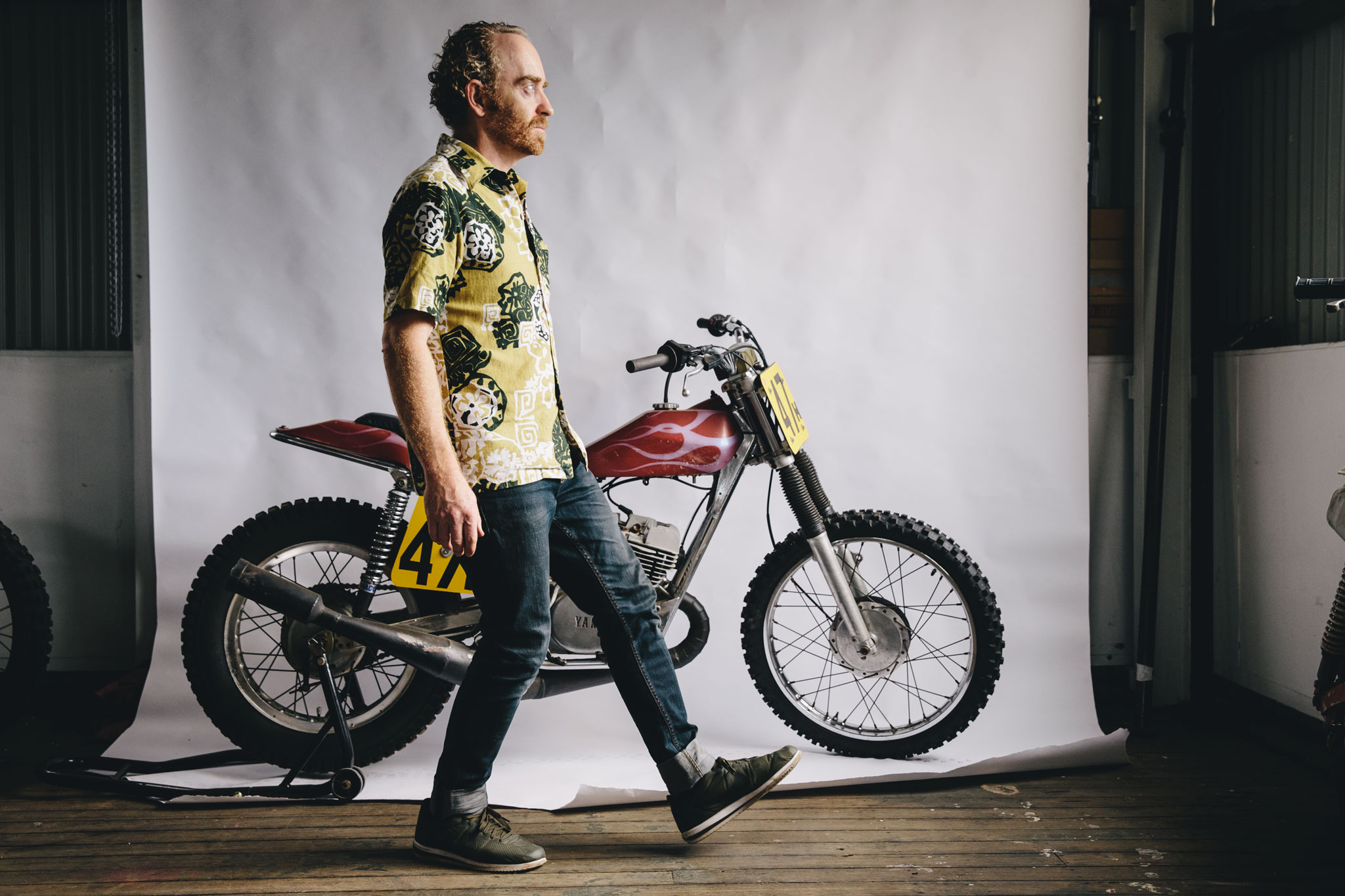 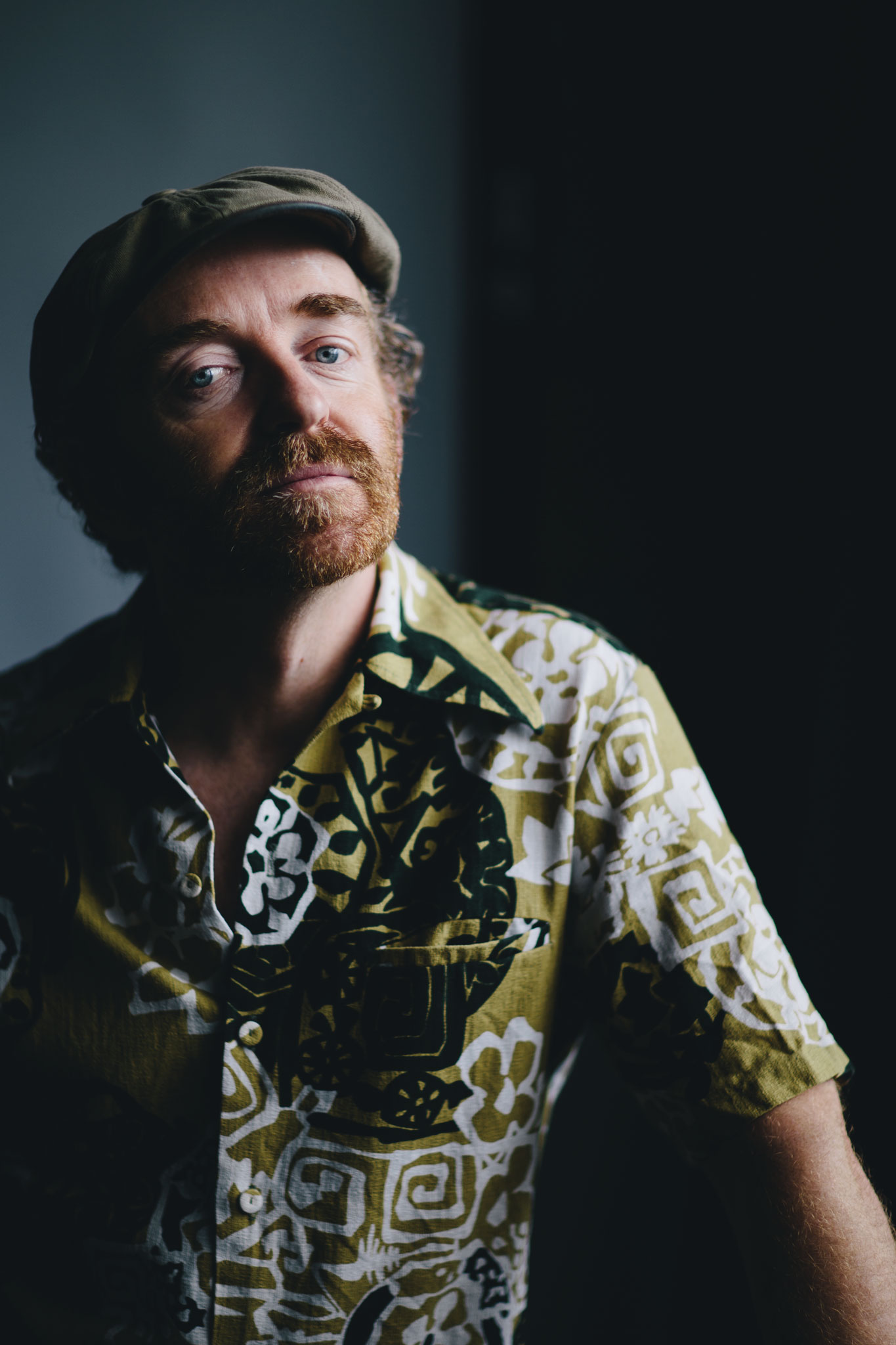 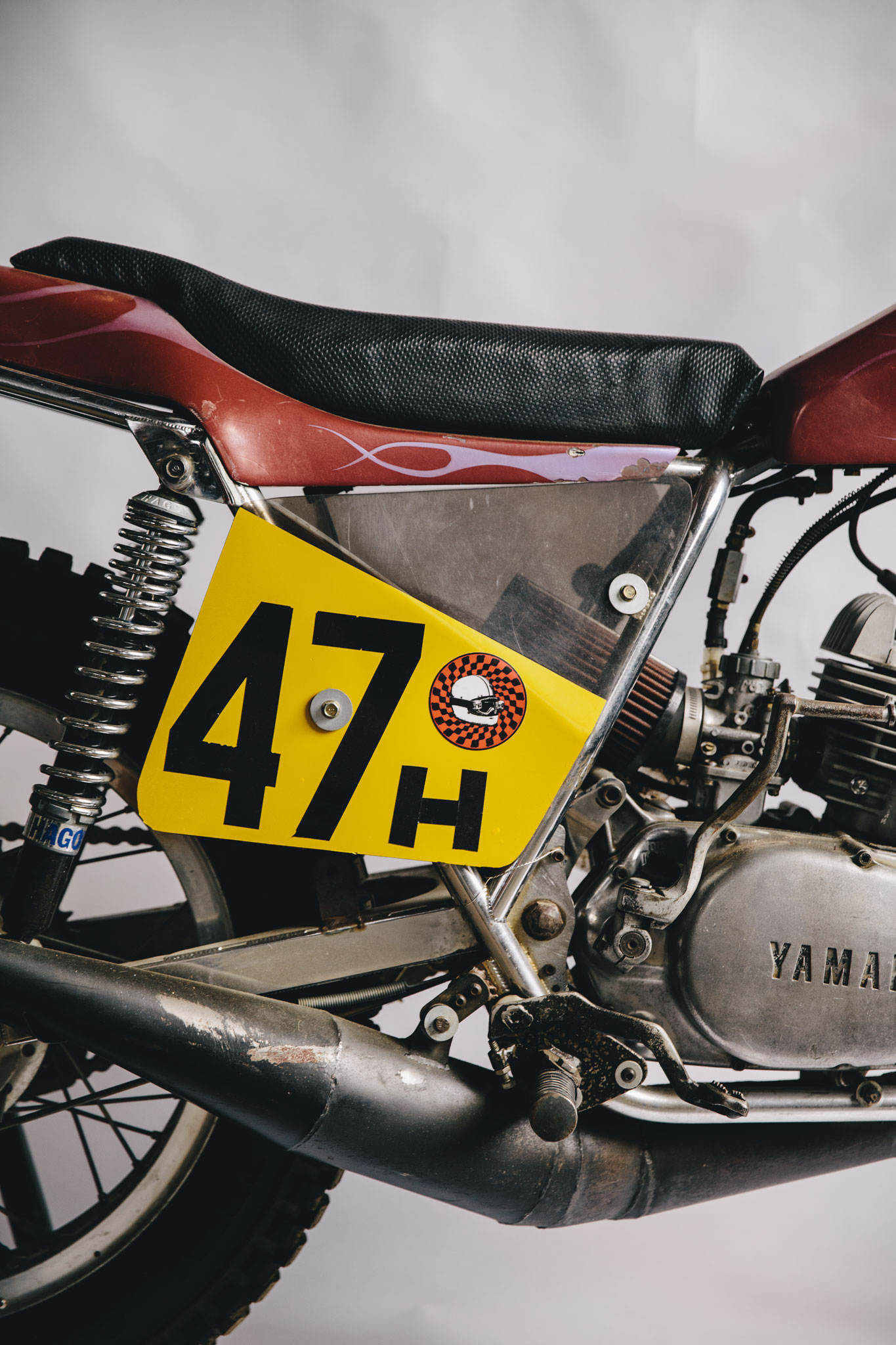 It’s now that you’ll realise Andy has no say in the matter in regards to falling head over heels in love with motorcycling. Such exposure to any young lad has dire effects – namely broken bones, and many wrinkles added to worrying mothers. But such is life, and Andy’s life is such. Enter Andy’s first bike. “My mates and I had bought a stolen Honda C80 for 10 quid. We began stripping it to look like a Scrambler – though it was nothing like uncle Frank’s BSA. But it went, and I was now a full paid up “Hells Angel”, on a C80, in a small forest, in Essex… aged 13. I started my dirt track career the following week. We pushed the C80 up to the local cricket pitch and started riding around in circles. The cops arrived shortly thereafter, and so began my life as a wanton super criminal. Without waiting for a ticket, I rode off home. Now a fugitive barely in high school, I hid in a bush with my trusty C80 long tracker – cleverly disguised as a broken postie.” 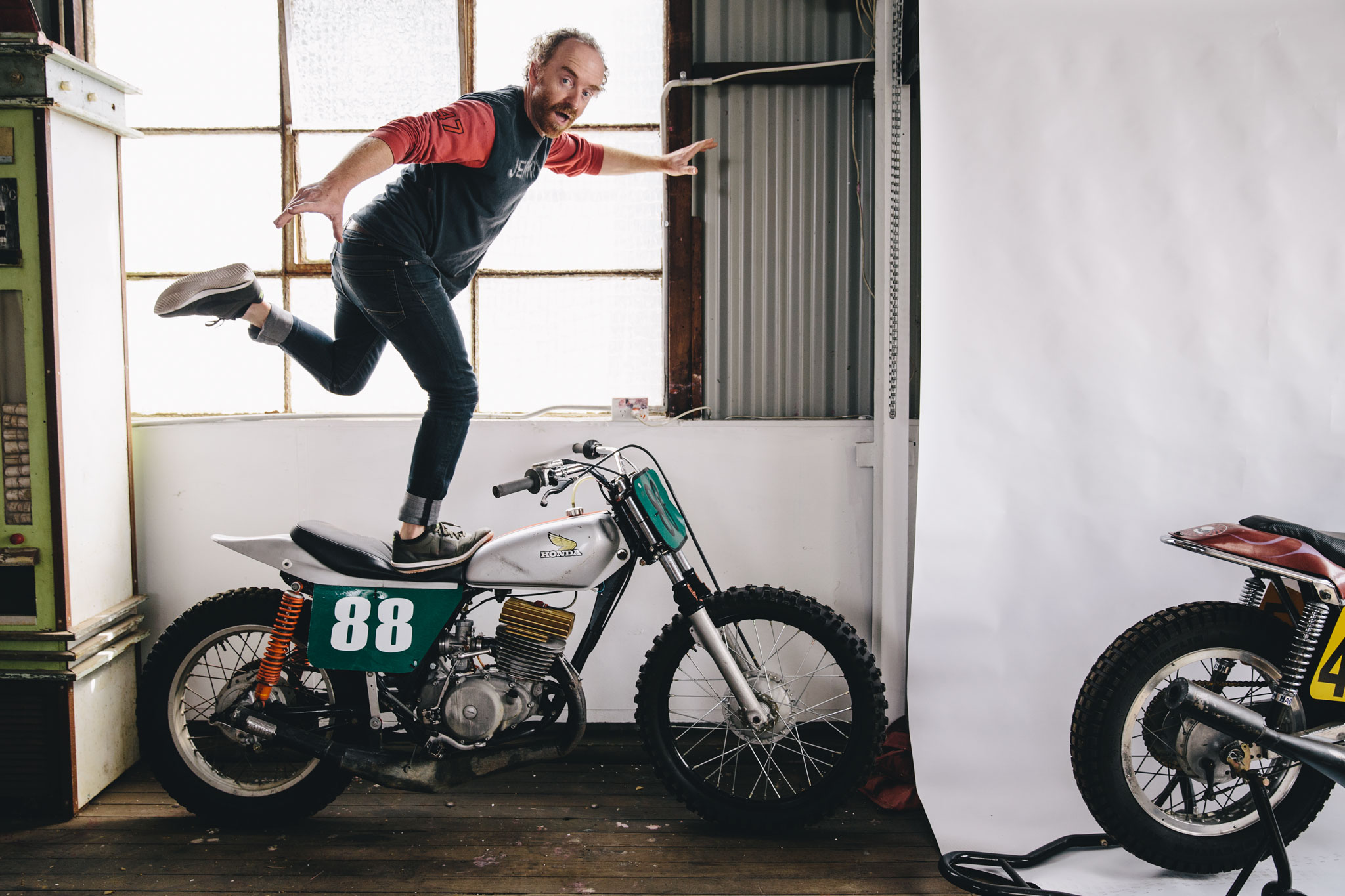 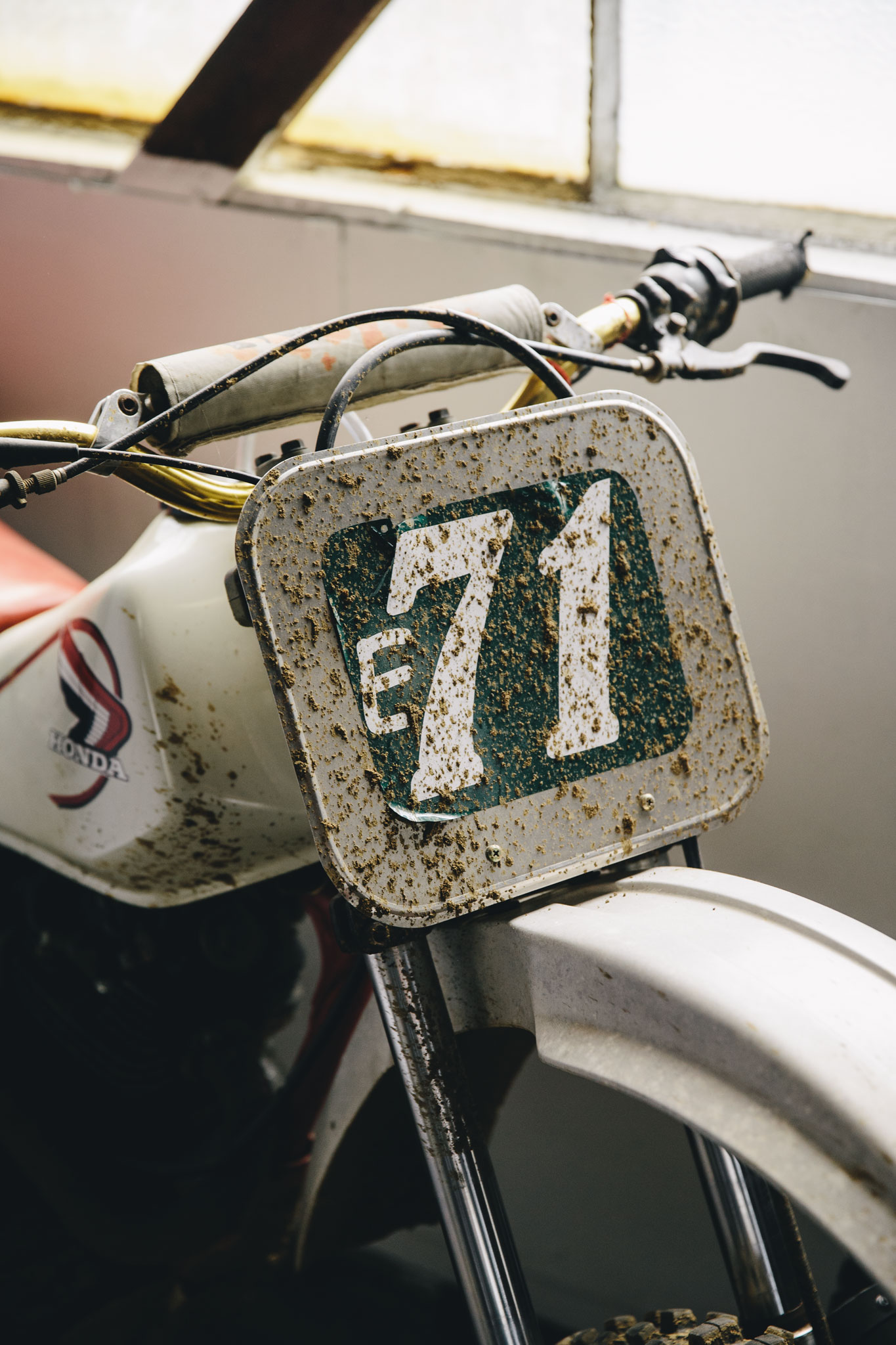 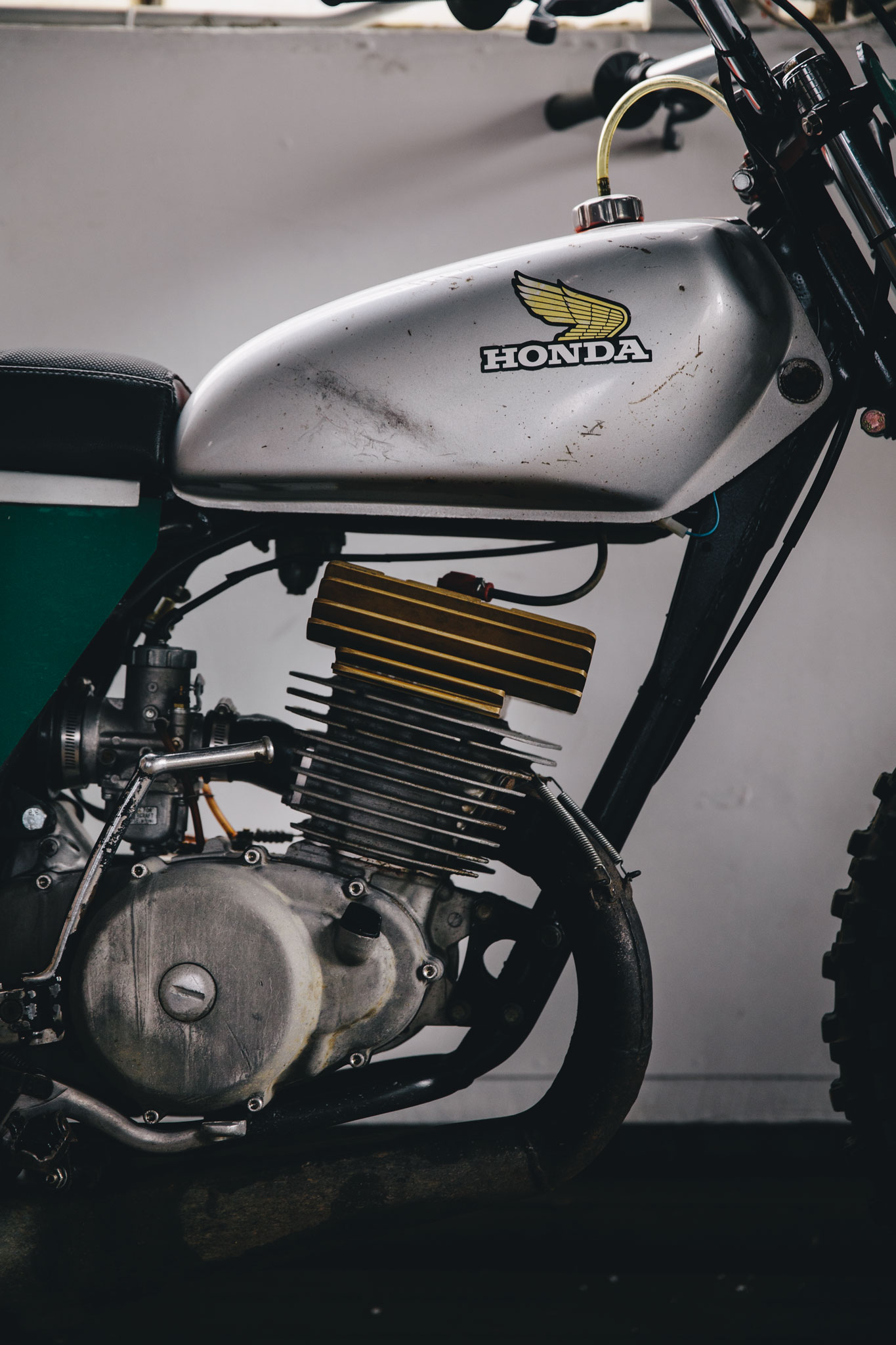 Fast-forward some years, some more bikes, and no doubt some more close calls with the police. Our hero/bush-hider is a motorcycle courier in London, with his much more impressive Yamaha RD350LC. At the lights, a gang of couriers would be lined up, all revving the guts out of their mix-matched machines. CX500’s, GT550s, and other such slugs. “Lean forward, 2 fingers on the clutch… GREEN! And suddenly all those 4-stroke beefcakes are outta sight. I like racing – I love racing. I may be crap at it, but it’s more fun than commuting. Unlike the road, people will commend you for driving like a maniac. The best part of course… cops tend not to book people on the racetrack.” 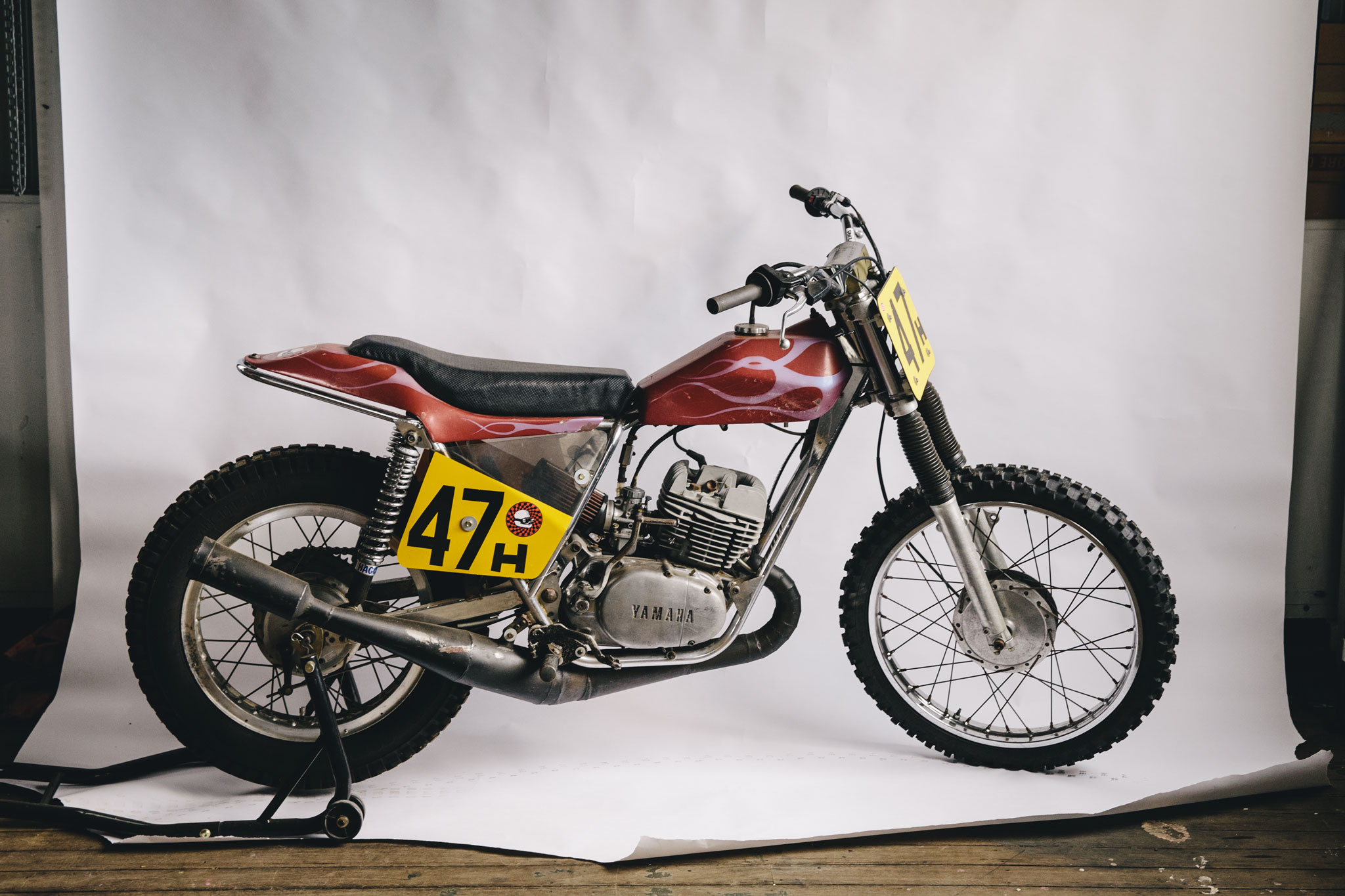 Wind the clock further along – a little less hair and a lot more bikes. As previously stated Andy and his sweet rainy England had parted ways for the sweltering heat, thongs, and shorts of Australia. “I had lost my licence again… this time I needed an antidote. I tried Motard, I tried VMX – it was then that I went to Nepean Raceway and God spoke to me. I had seen the divine light; I had to share this revelation with the world. Door knocking clearly didn’t work, so I went to the pubs, RSL’s and ‘round to Bill’s house. “Hmm… sounds fairly low impact” he replied in a rebellious North Shore schoolboy sort of tone. I had my first disciple! From here on we spread the word. Tough guys came, men and women who wanted to ride in circles (hereby named Jerkyls) and eat snags in white bread at the canteen.” 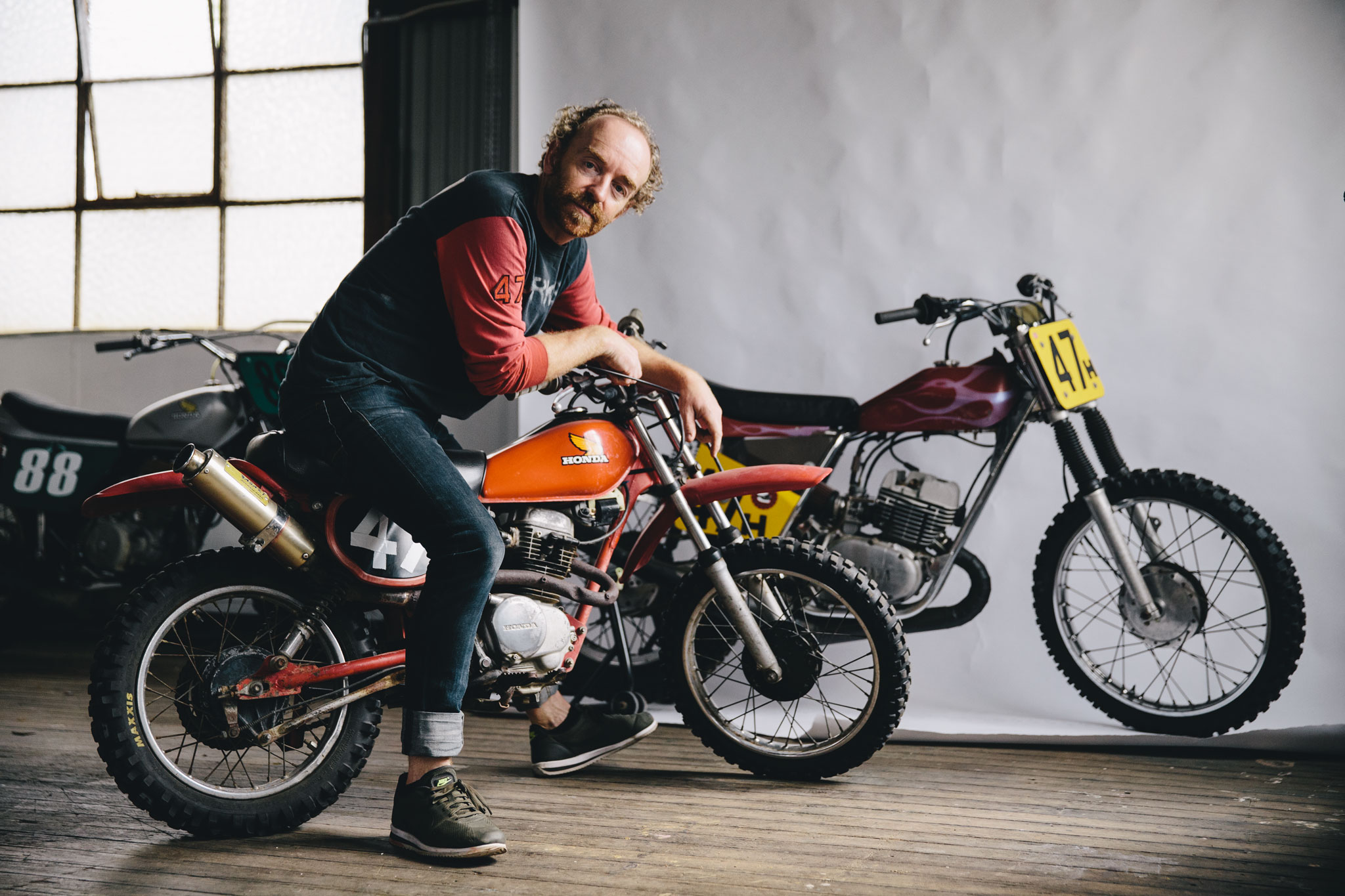 The Jerkyls. A name all too familiar with those who keep up appearances in the motorcycling world of Sydney. The hallowed ground of Nepean Raceway is overtaken by the scum and villainy that bring their demonic machines, eager to turn left and go in circles for the infamous Sunday Slide. The Jerkyl’s mantra is simple and glorious, “You don’t have to win, just take part”. It’s about getting bums on bikes, and enjoying everything that the vintage dirt track world has to offer – which incidentally also includes many beers. “In the last couple of years we’ve grown to 20 guys and girls, we hangout together weekly if not daily. I’ve always had good friends, but the ones who roll up next to me on the start line now feel like family.” 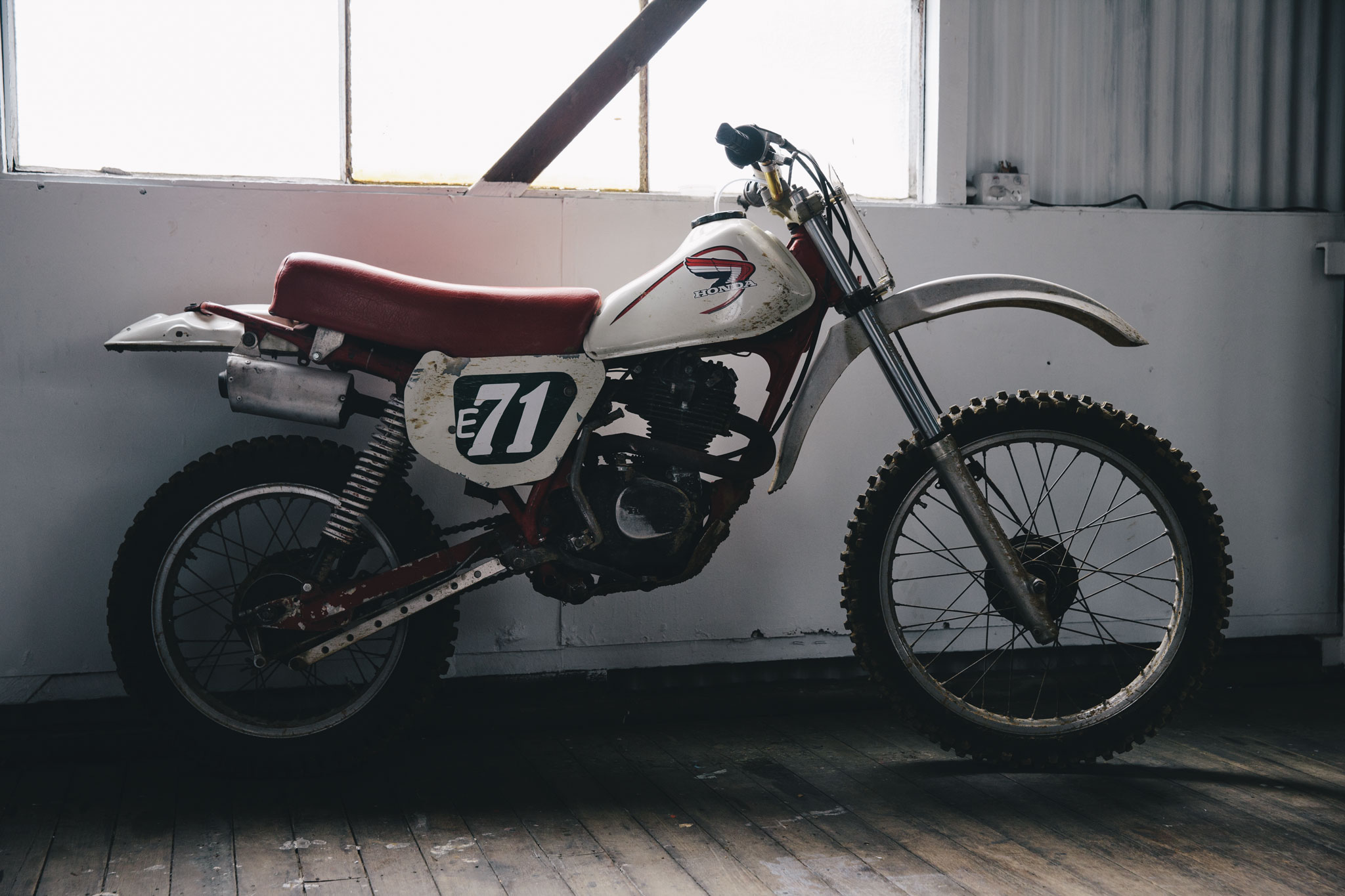 Human family aside, Andy’s got quite a mechanical family as well. Andy’s current favourites – 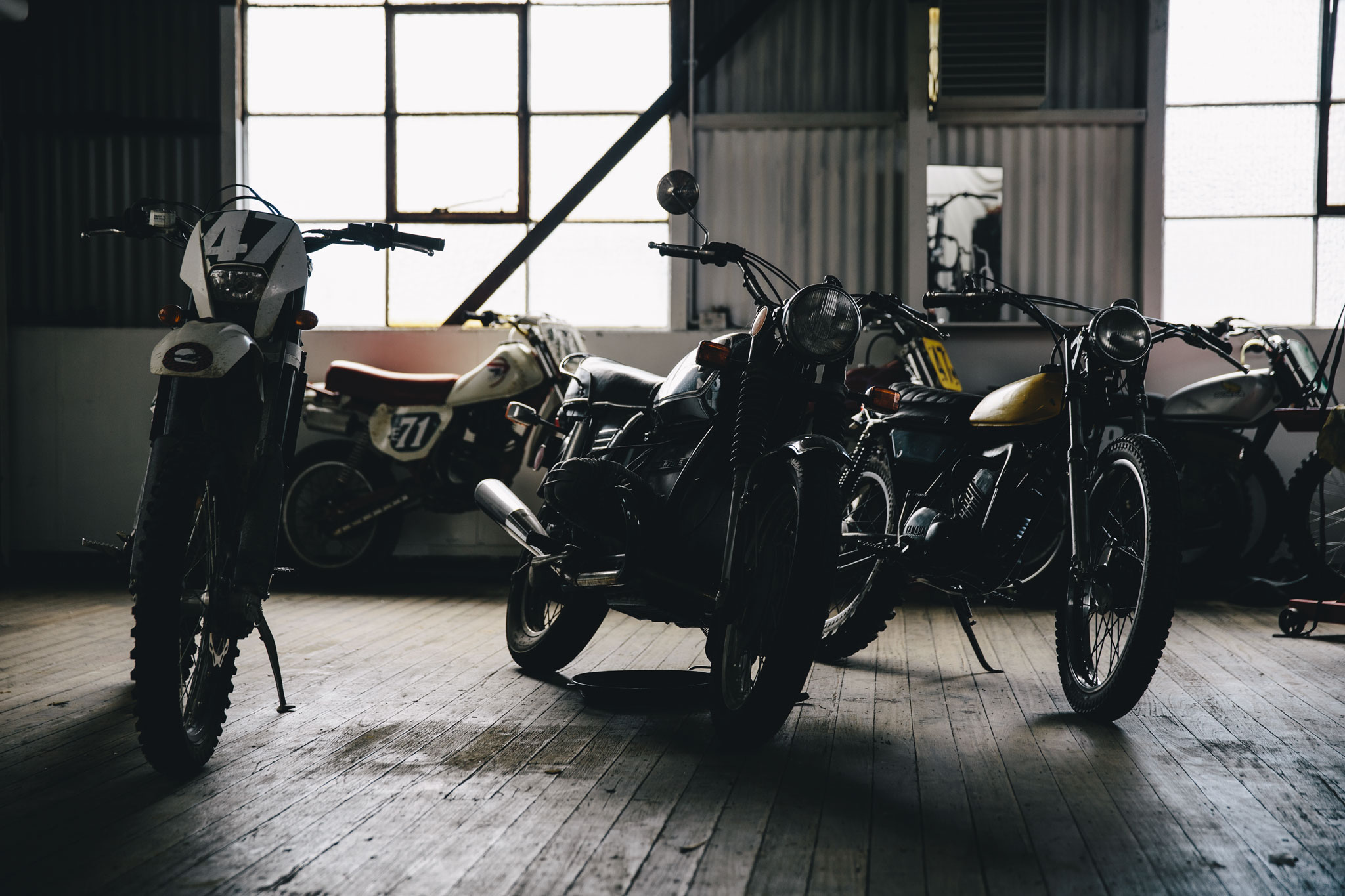 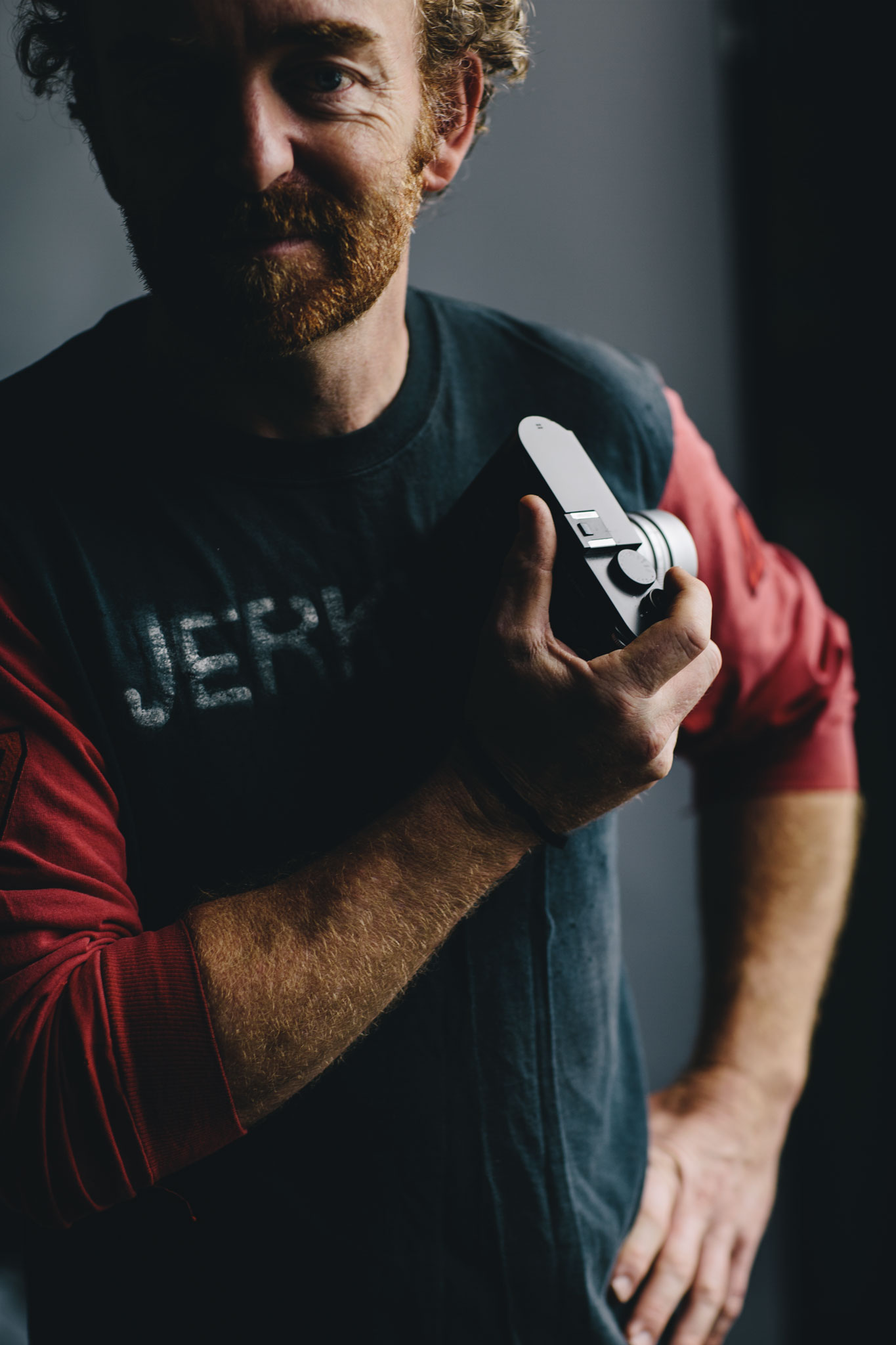 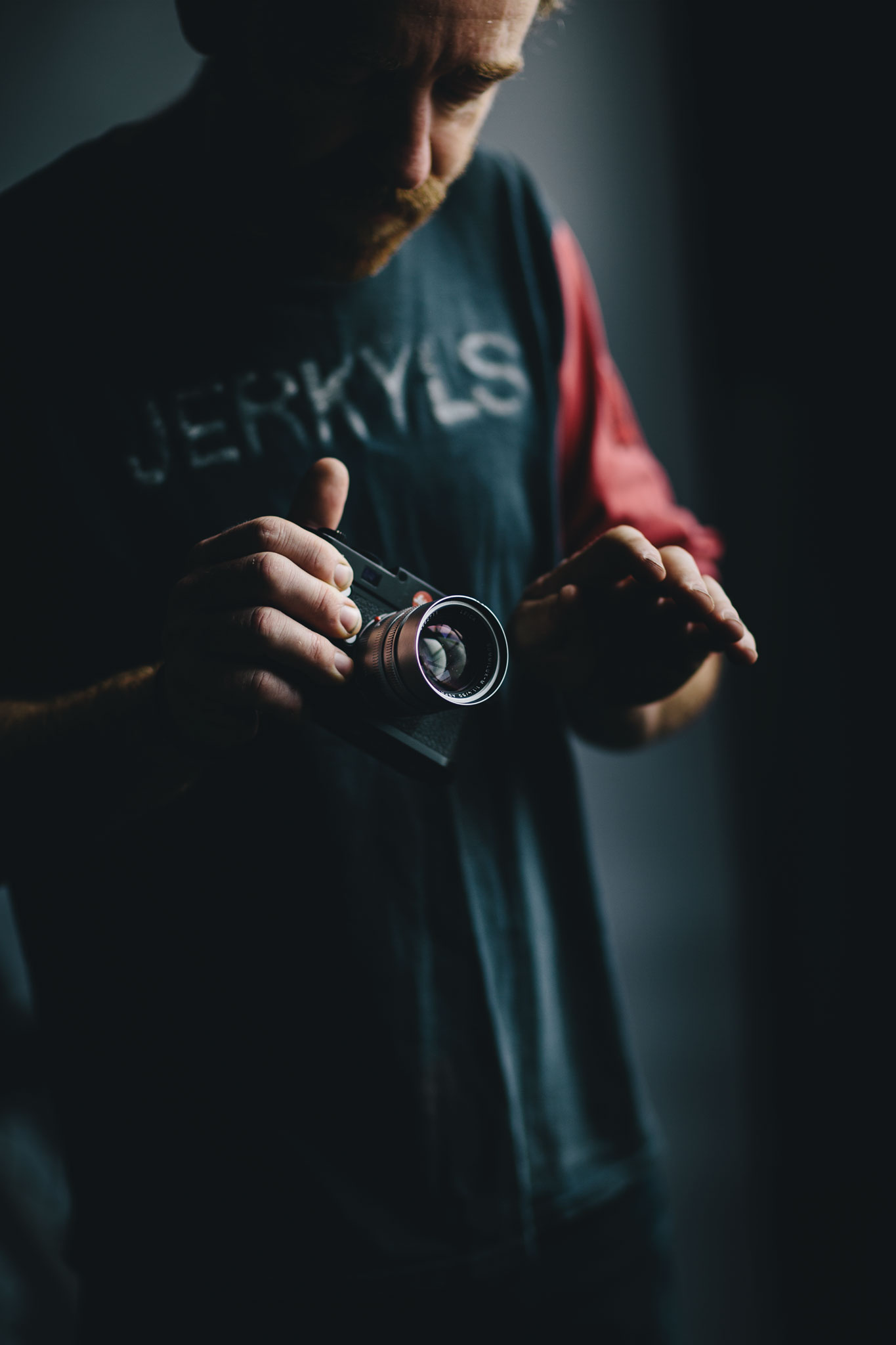 It’s not just racetrack Jerklyism that blows Andy’s hair back, but he is a committed creative behind the lens. A professional photographer by trade, he first picked up a camera age 6 and soon was turning it into money at age 18. “It is possibly the best job for a restless soul, I have seen and reported on some beautiful and horrific stories.

I travelled for years and decided Australia was an amazing country and it’s never let me down. Nor has my Canon, I own Leica’s, a Nikon and Fuji’s, but if its important I always reach for a Canon.”

But of course for the camera dorks we caught Andy with his Leica. Be sure to check out his work at www.andybaker.com.au 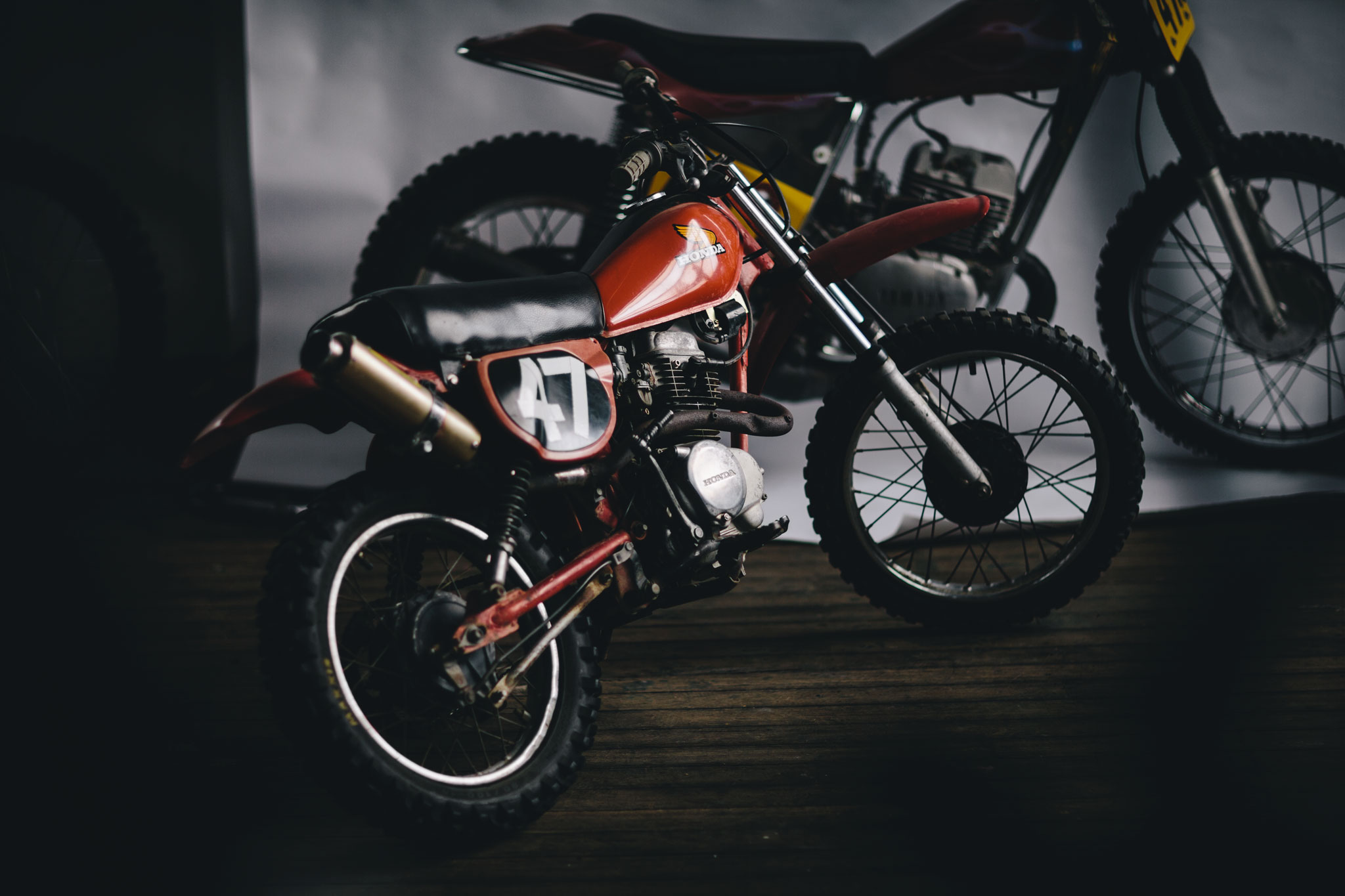 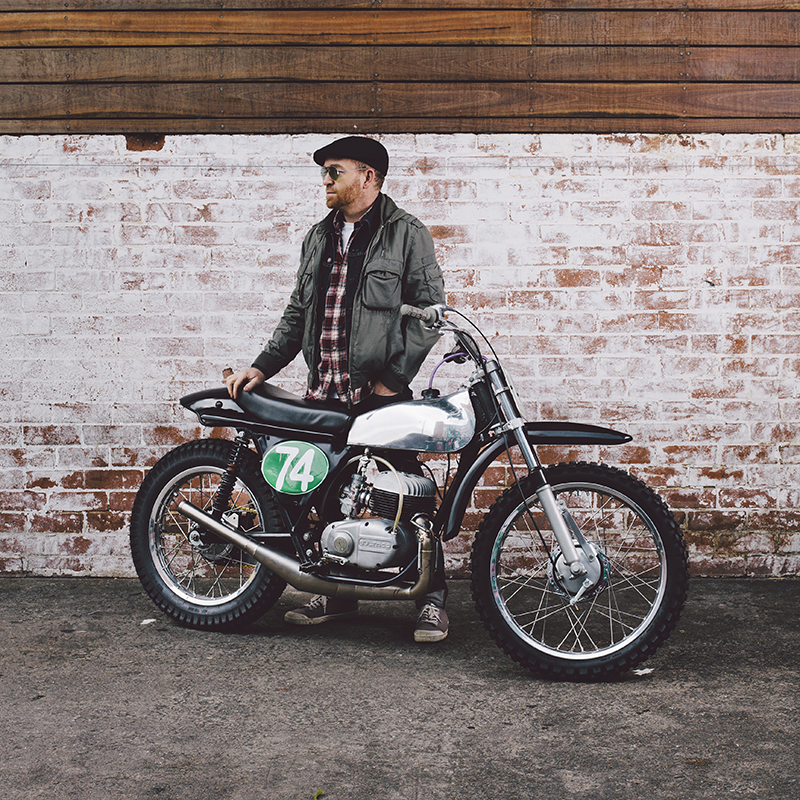 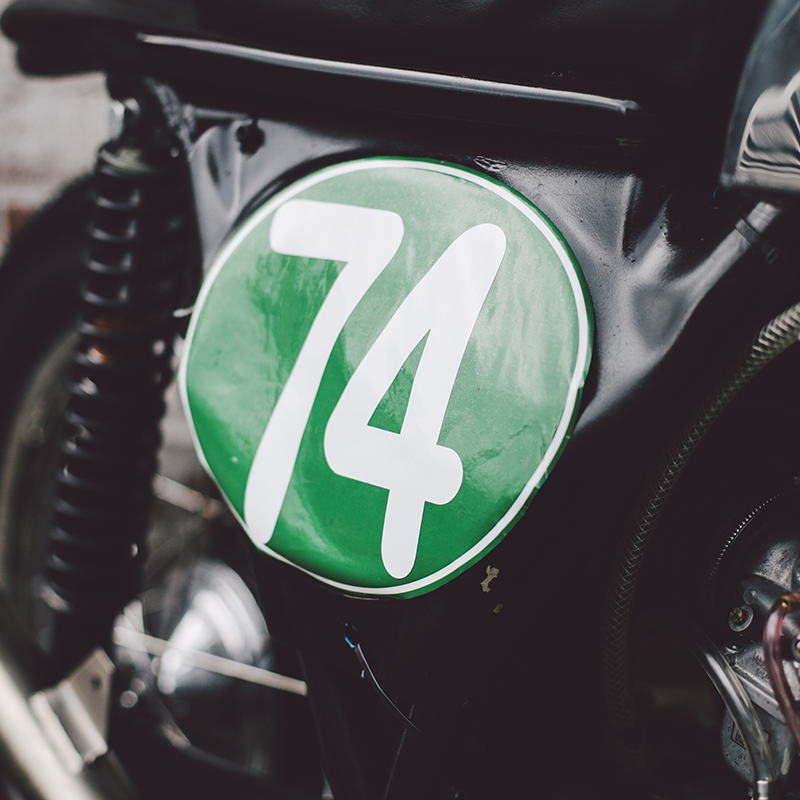 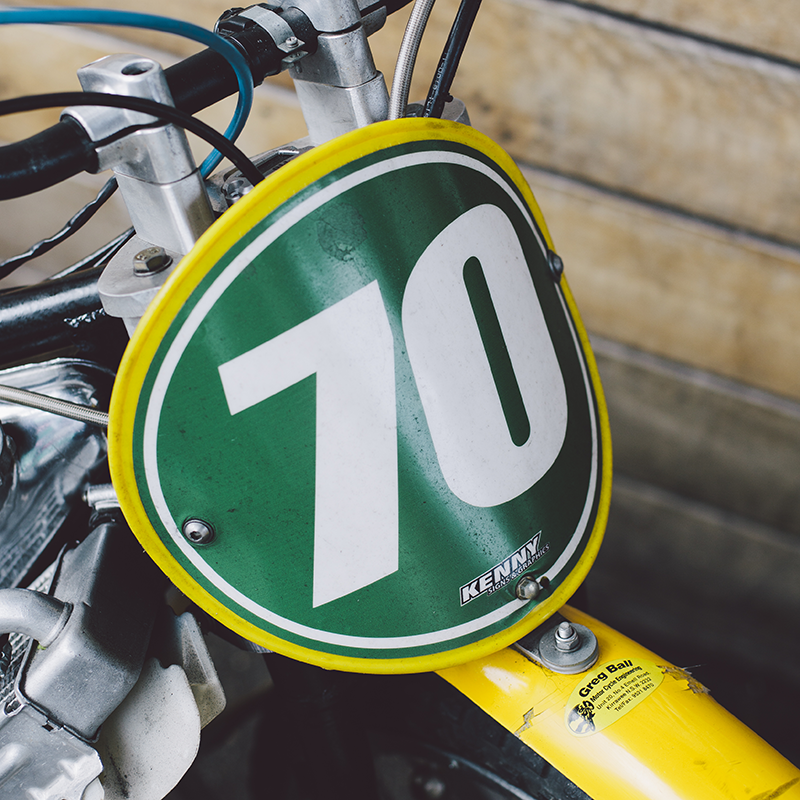 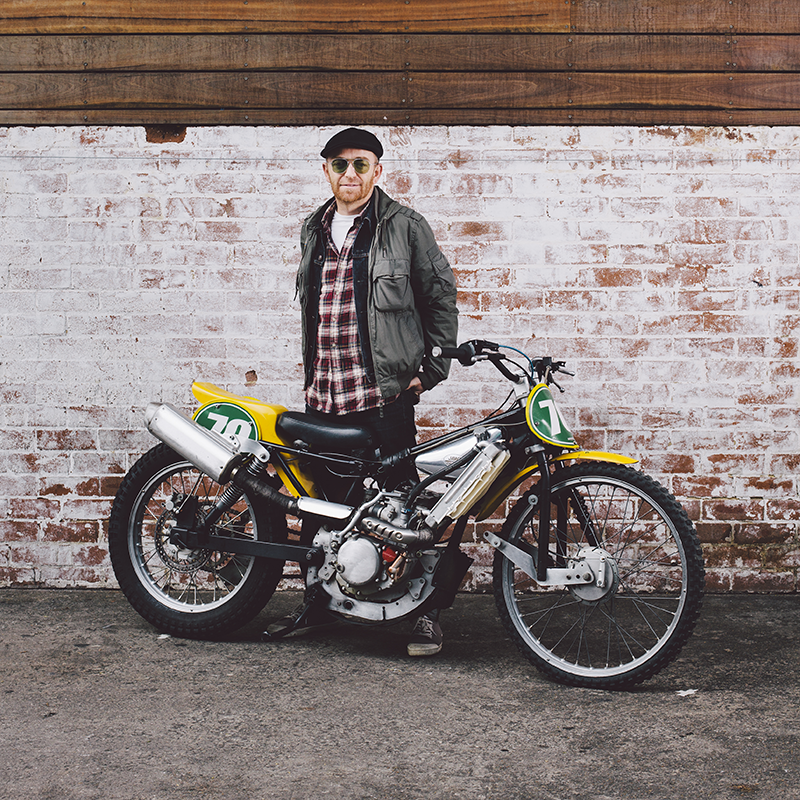 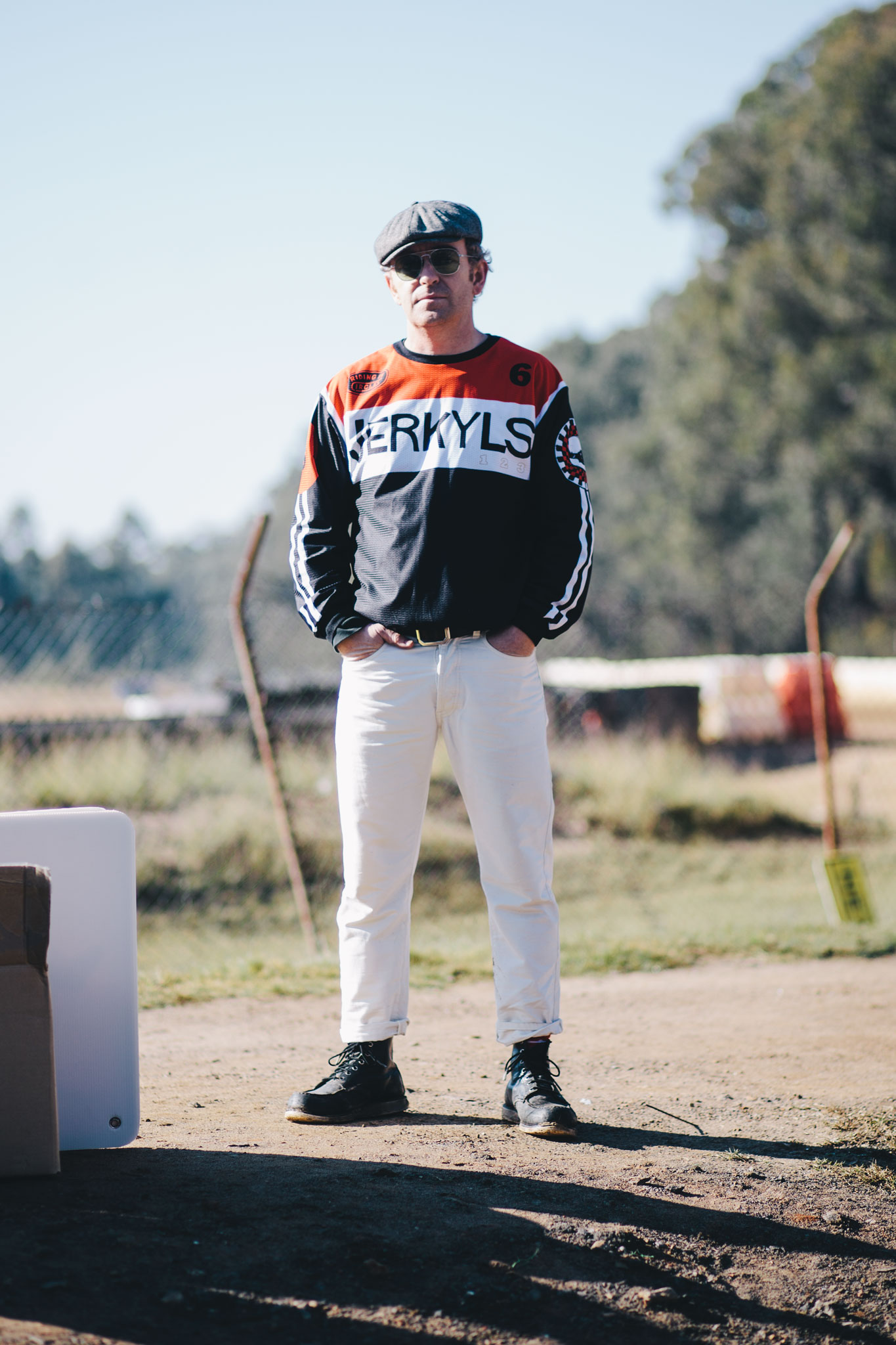 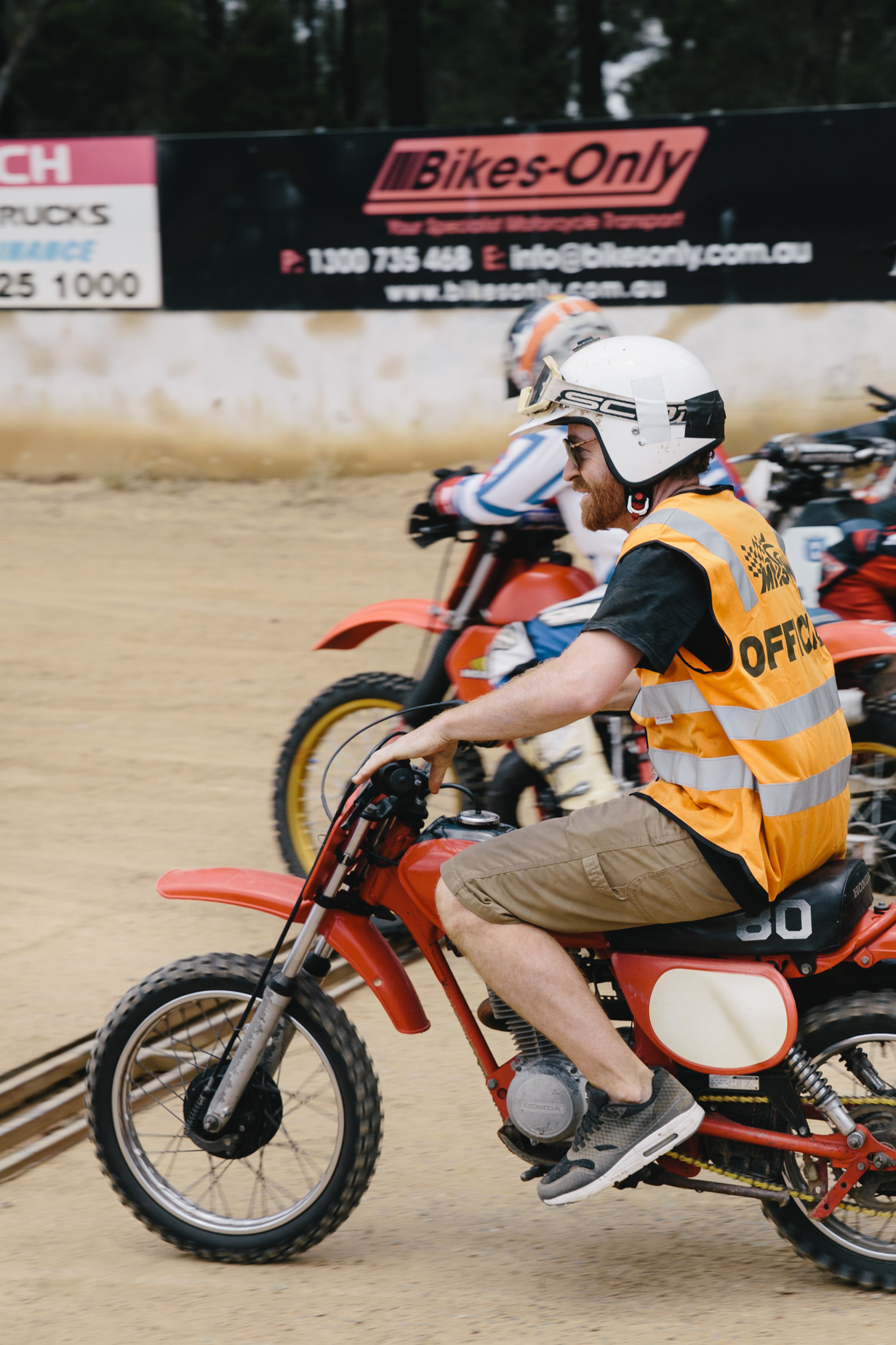 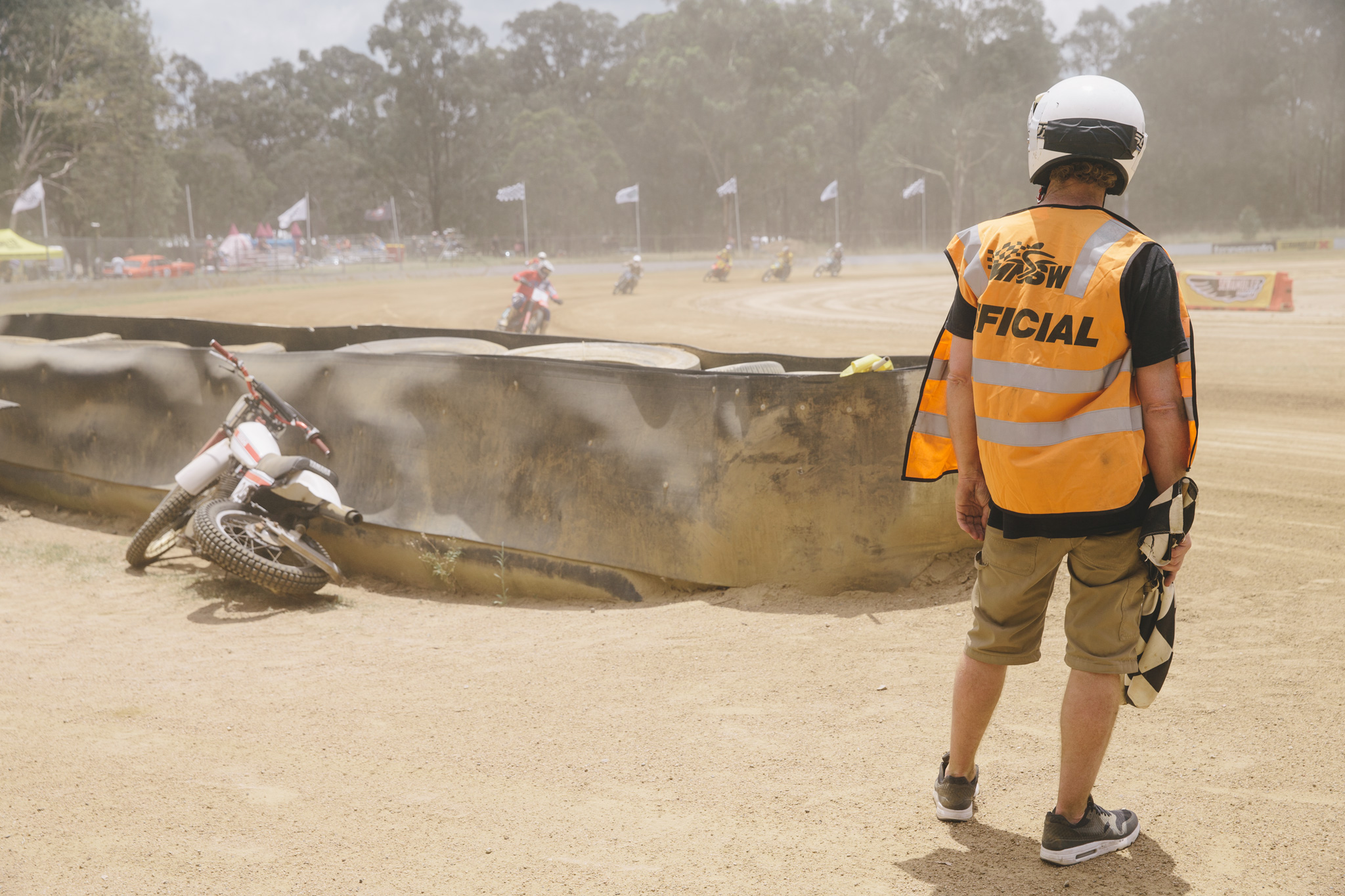