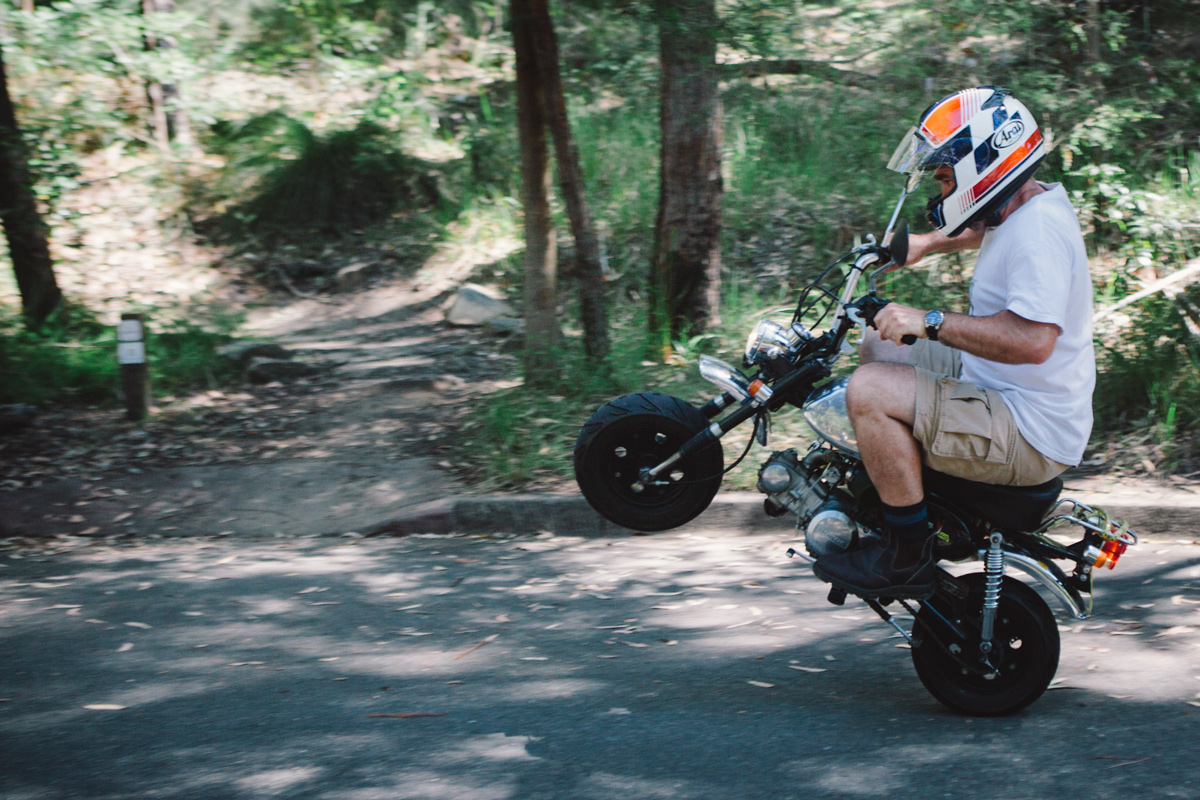 Upon meeting Andy, he was eagerly telling me about these “bloody kids up the road that keep doing wheelies past my house and causing a ruckus, just because they’ve seen my bikes in the driveway!” It was not long after this that Andy was on one of his many Honda Z50’s, with one wheel in the air. Damn youths these days… 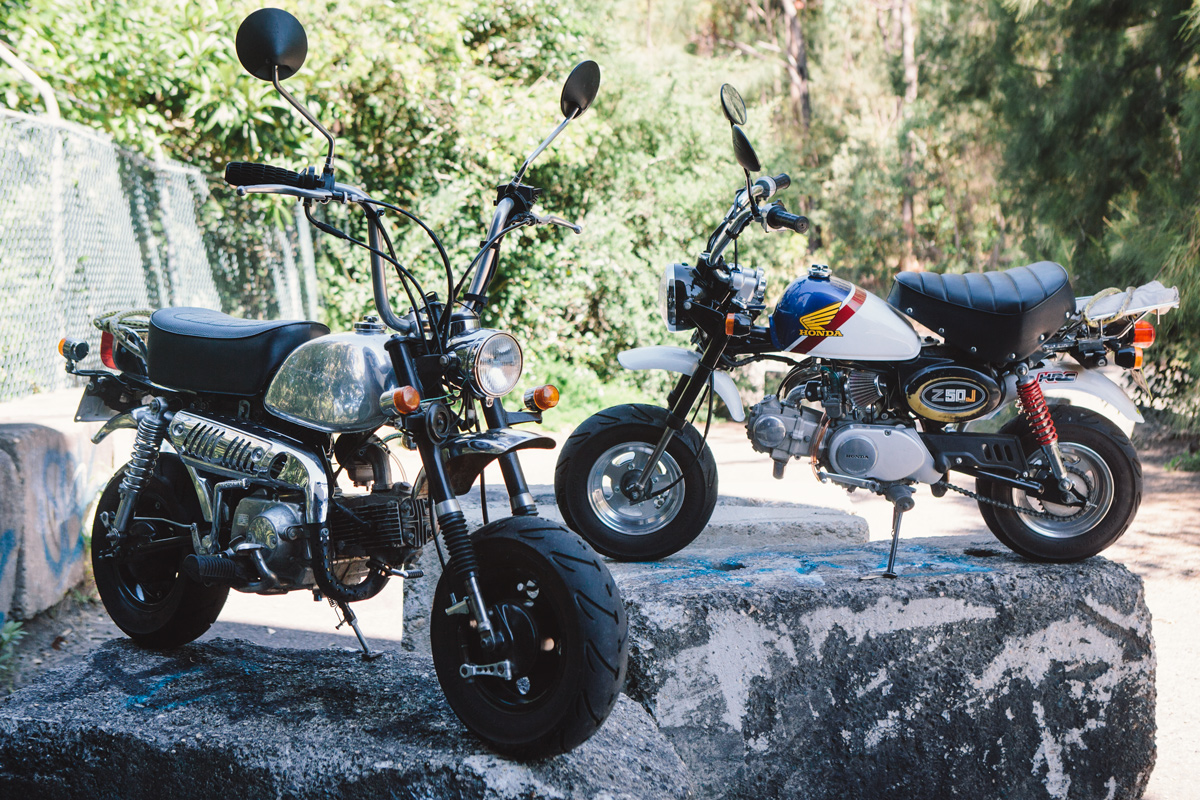 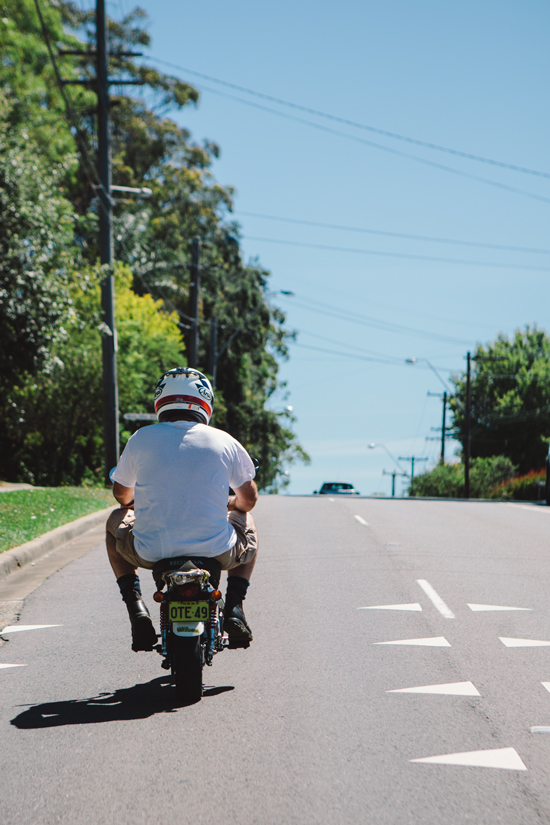 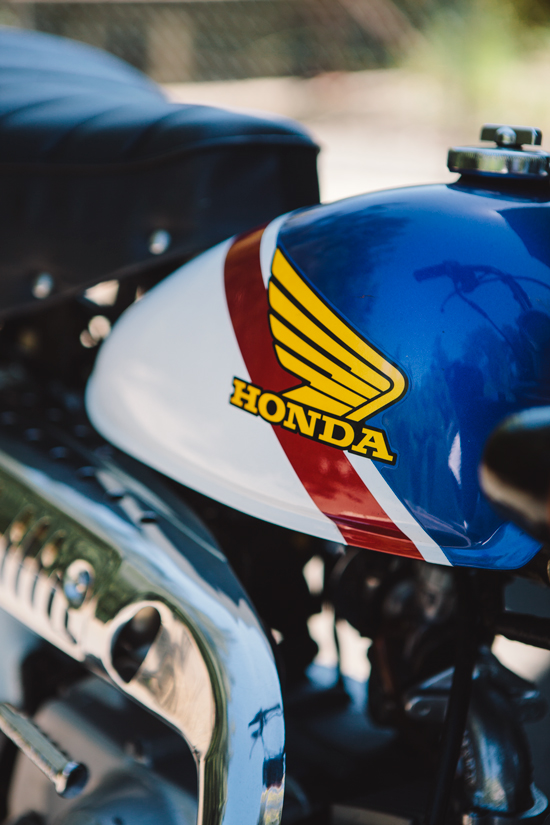 If Andy’s magnificent face looks familiar, you’re probably recognising him from that time we rummaged around his remarkable collection in his garage some time back.  Now we’d be taking these little terrors out on the road to get a bit of sun and air. We took out a customised Honda Z50 J1, and a HRC themed JZ50. Andy prides himself on the differences between each of his builds, differences that make them unique. 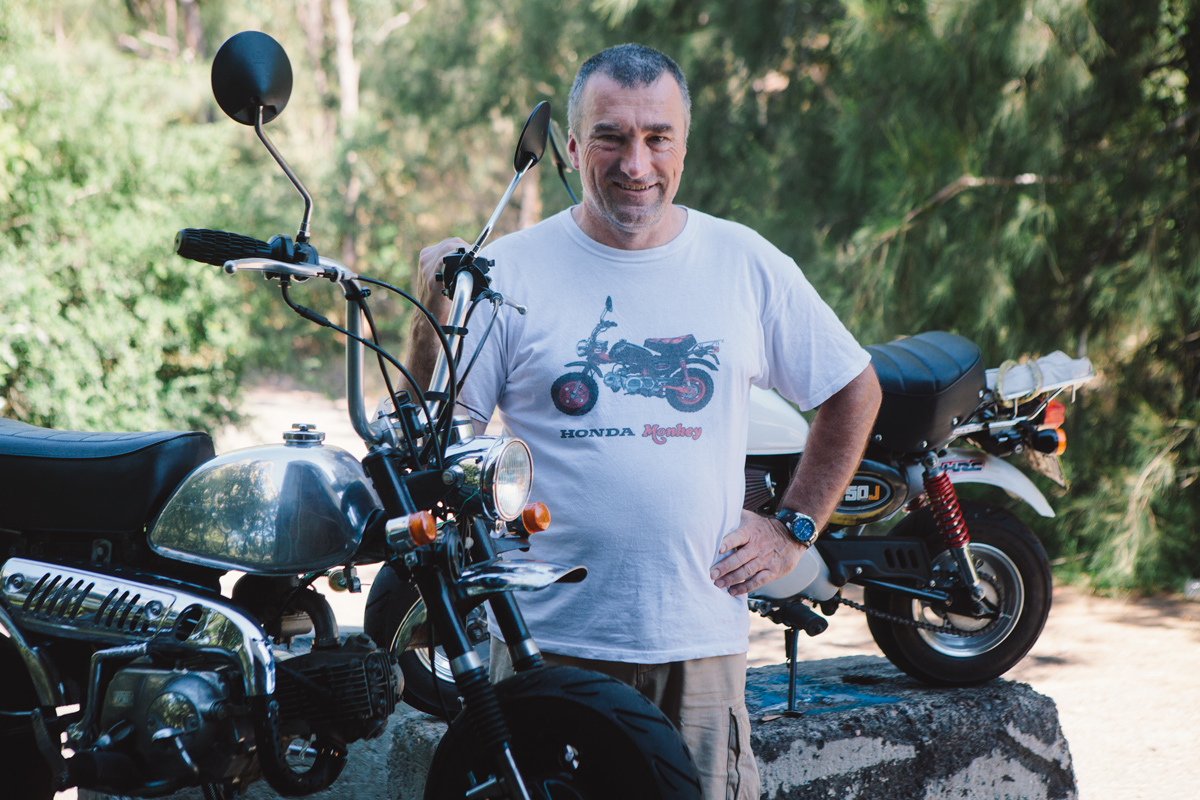 “The Custom Z50 J1 rides more like a dirt bike, while the other is more like a sports bike in it’s handling. There are tricks to making it all work the way you need it to – it’s never a case of “buy it and bolt it on”. Death ‘n’ taxes are the only guarantees, so the handling is all about you, your shape and your weight because the bikes are small and light. I built one for my Mate who weighs 110kg as his daily rider, and its nothing like the way I’ve set mine up.” 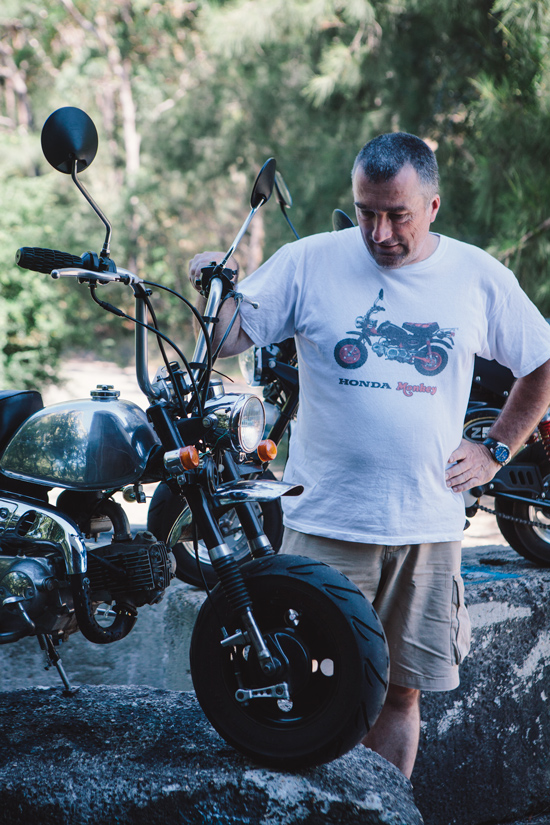 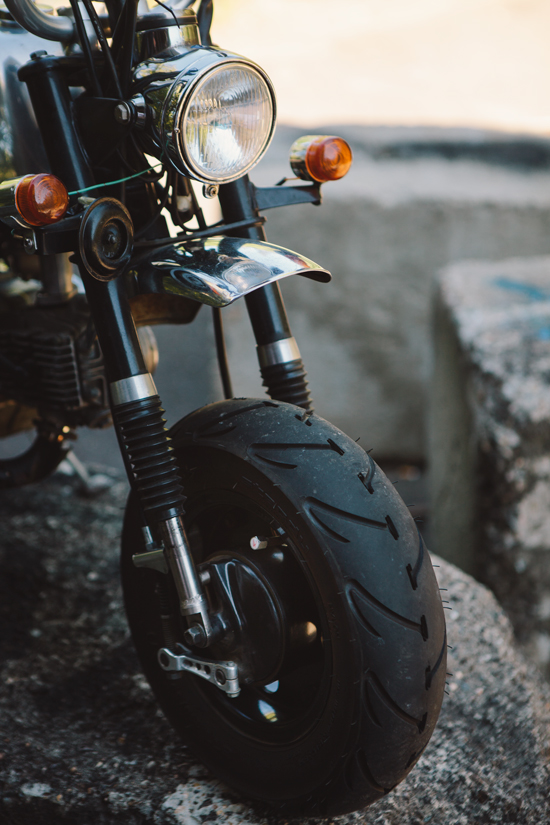 Although a keen collector of these little bikes, they aren’t for show or for gathering dust in the shed. They’re all built for the road and to be used and enjoyed. “I pick and choose which bike I’ll ride depending on the run I’ll be doing, whether it’s a cafe run, a ride up to Pie in the Sky or The Galston Gorge is a ripper and one of my favourites. My Mate can’t catch me on his postie through there! I have knobbies on wheels for every bike I’ve got in case I go dirt. It’s just an axle out and a wheel swap.We did The Distinguished Gentleman’s Ride last year, I brought along two bikes. It was an awesome day, we made ourselves a big ride home and made a day of it. I’ve got three bikes for this years ride, and we are building two more mud bikes for a charity ride called The Scrap Heap Adventure ride to raise money for down-syndrome” 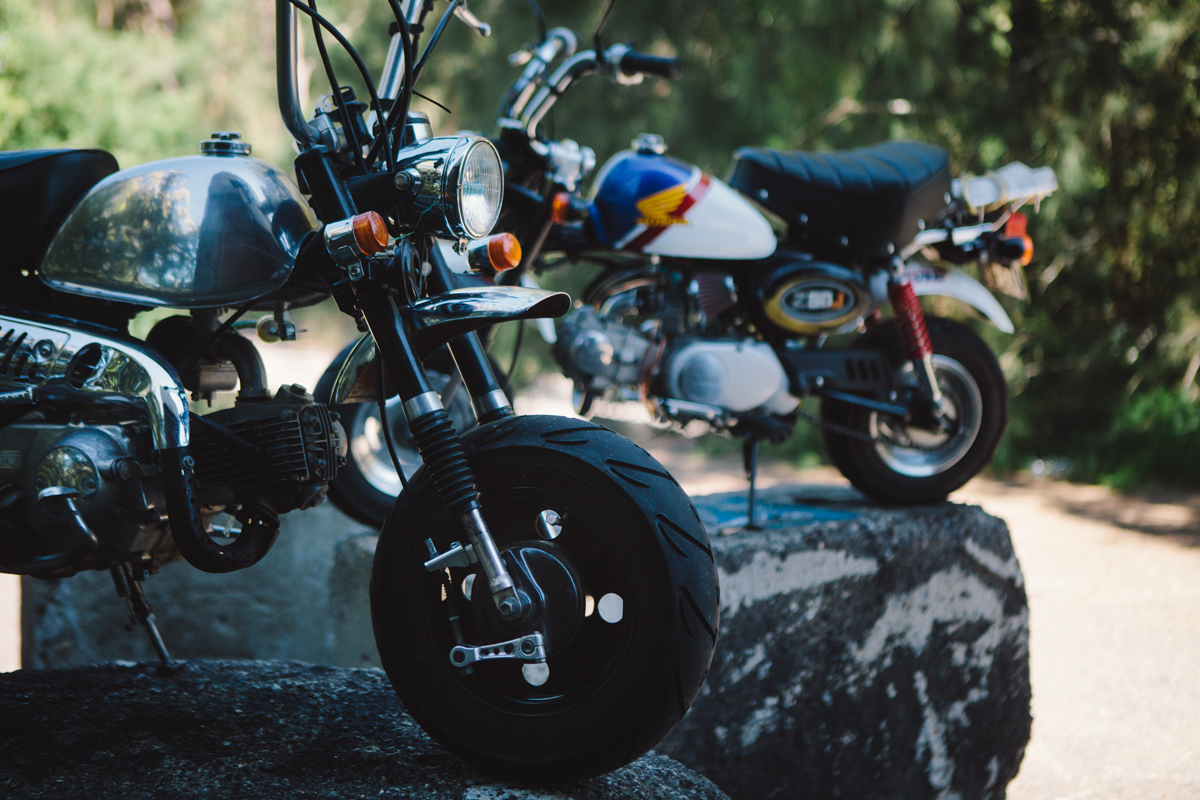 Andy first got his passion for bikes when he was a young fella with a minibike that never ran, until one day a mate of his Father’s decided to put a lawnmower motor in it, and he’s been hooked ever since. “It had a few motors in that frame, then I bought a Dt125 e, an XR 75, an Xt250 G, an RD250 LC , a KLR255… The list goes on and on. Then for a few years a mate lent me a Honda 750 Four with a big bore kit and a Walker 4-into-1. The power and the Passion… Giddy up! I went out and bought a Honda CB900f2b right after that. That Baby took me to Tassie for 6 weeks and all over the country. Ive had three of them. Then I got the Harley… and a few more fast dirt squirters… and then the monkey bikes.”

So who needs to go to bike rehab? 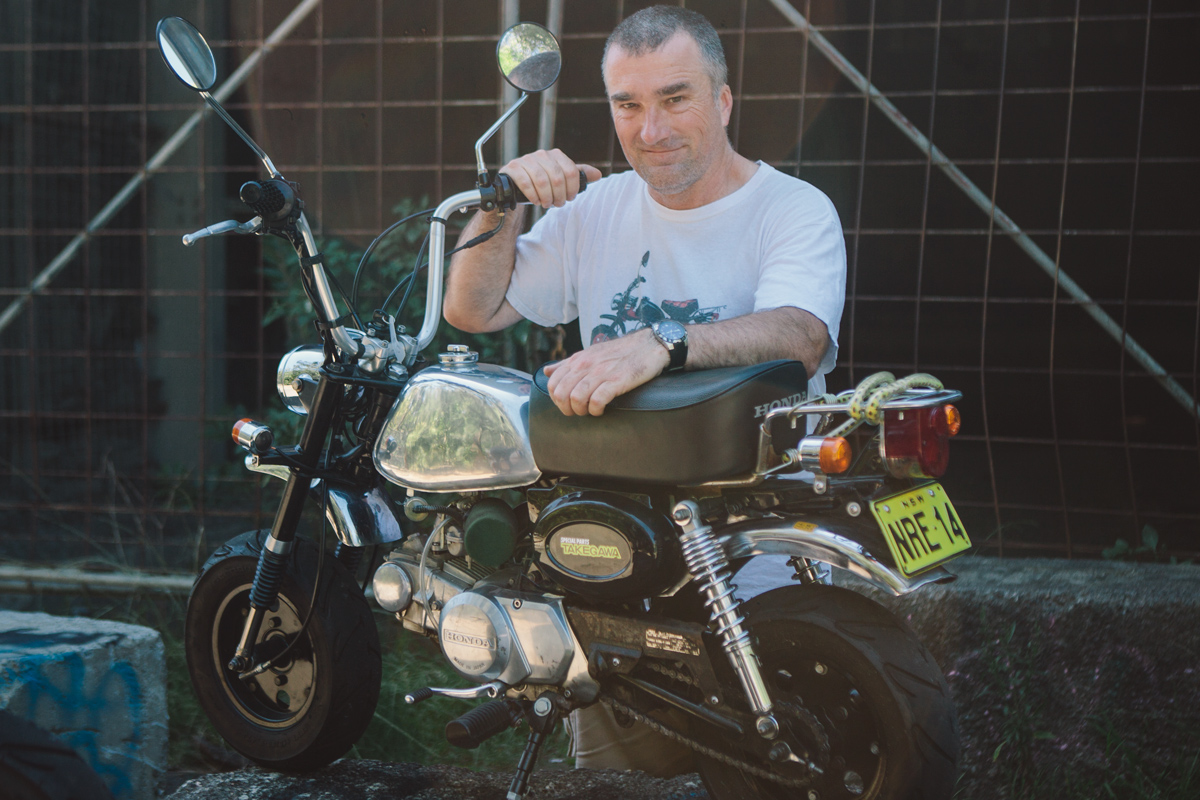 “I have 19 suppliers for my bikes, and I do between 4-5 builds every year as blokes seem to not get the total idea of riding means spannering as well.

We have the best life when we ride. Tin tops just keep the rain out, freedom is the same wether I’m on a dirt squirter, my Hog, or a screaming 50. It’s about being switched to what the machine does and switching off the world and all it’s bullshit.” 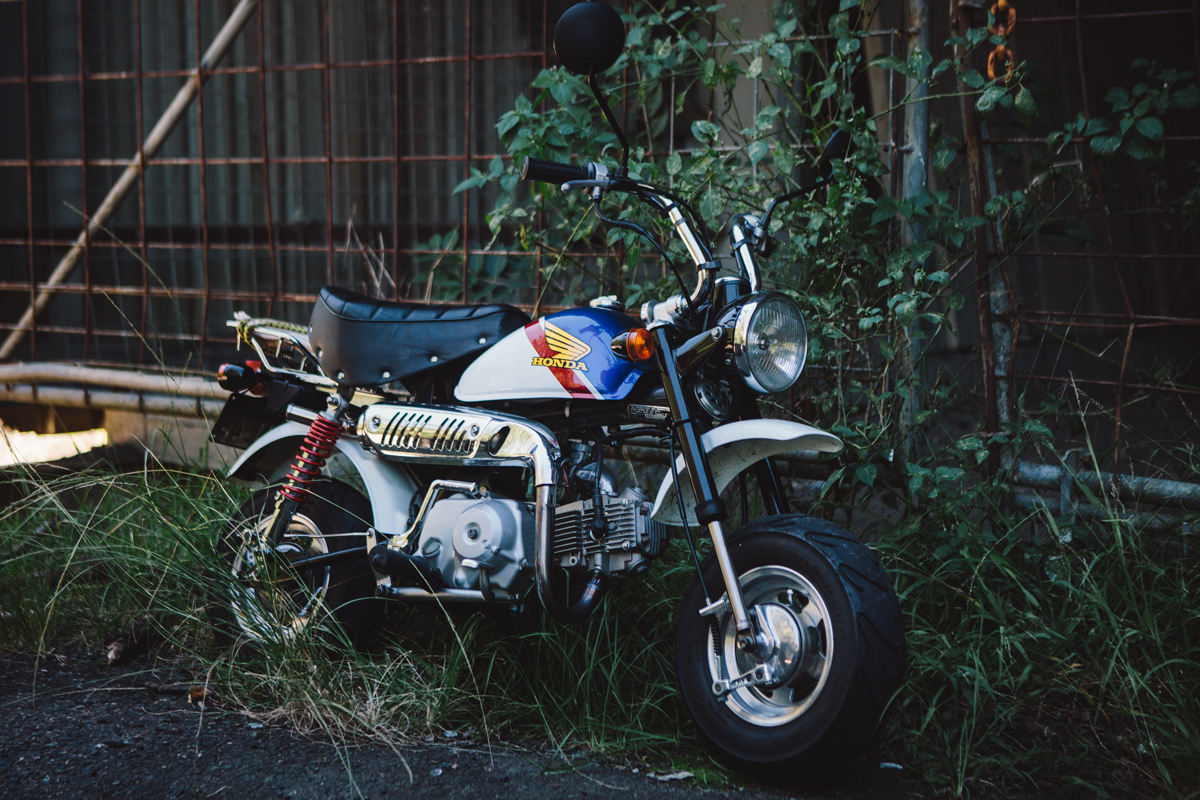 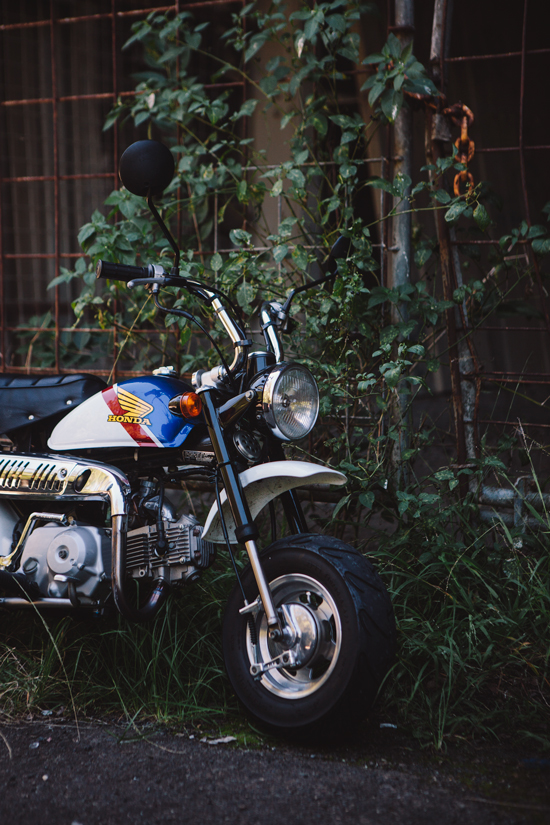 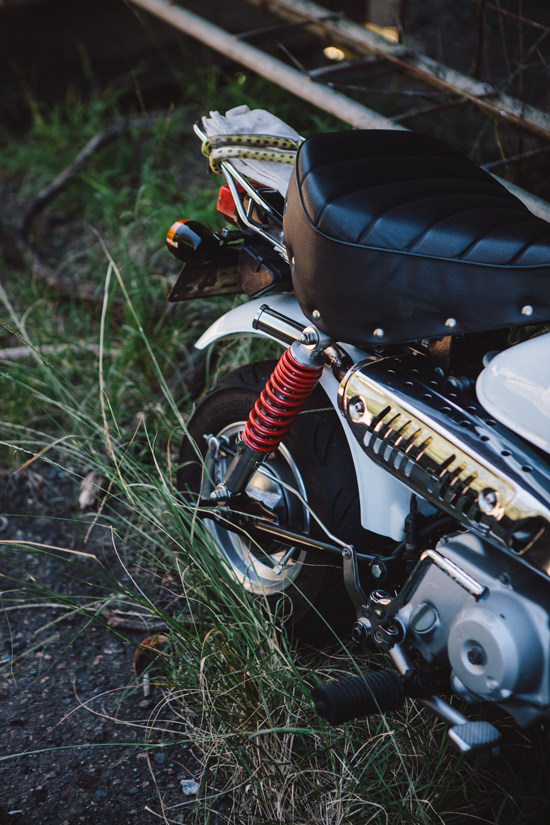 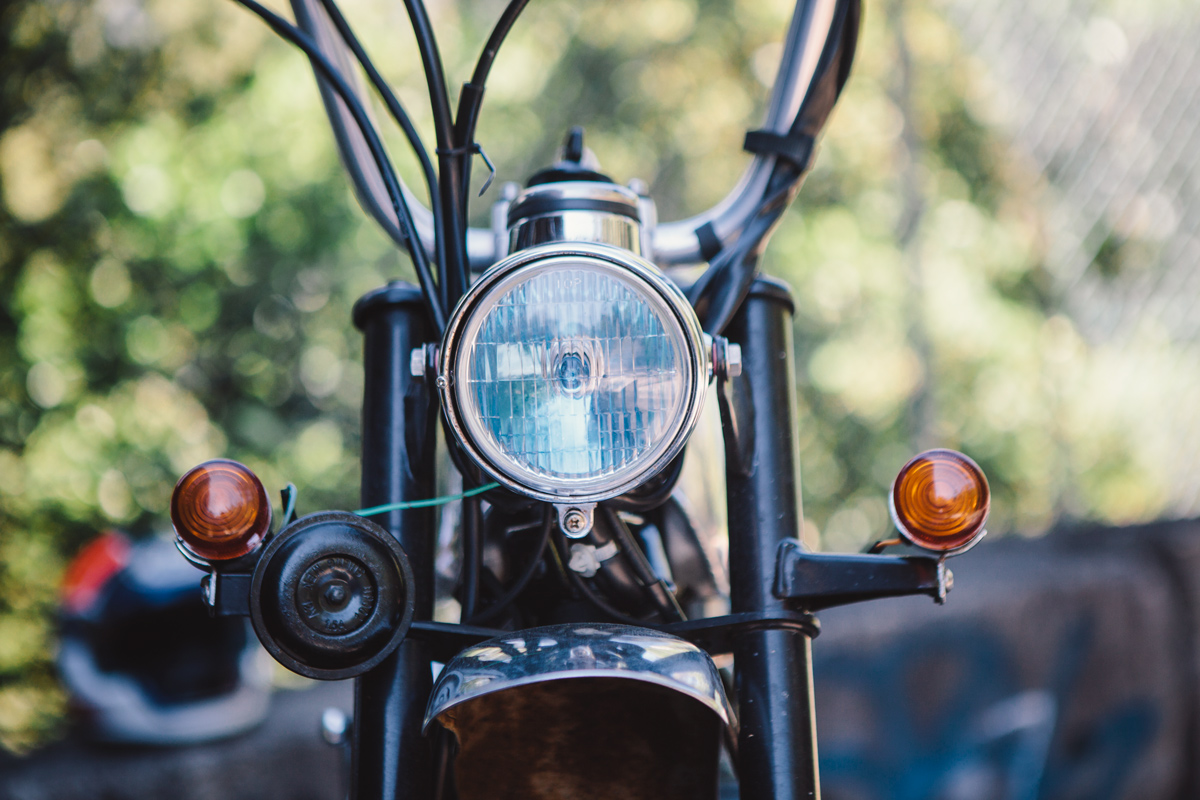 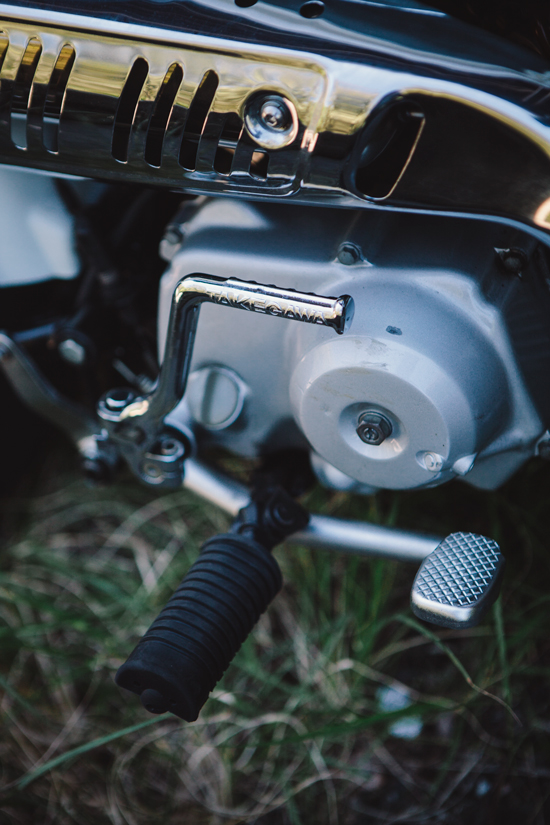 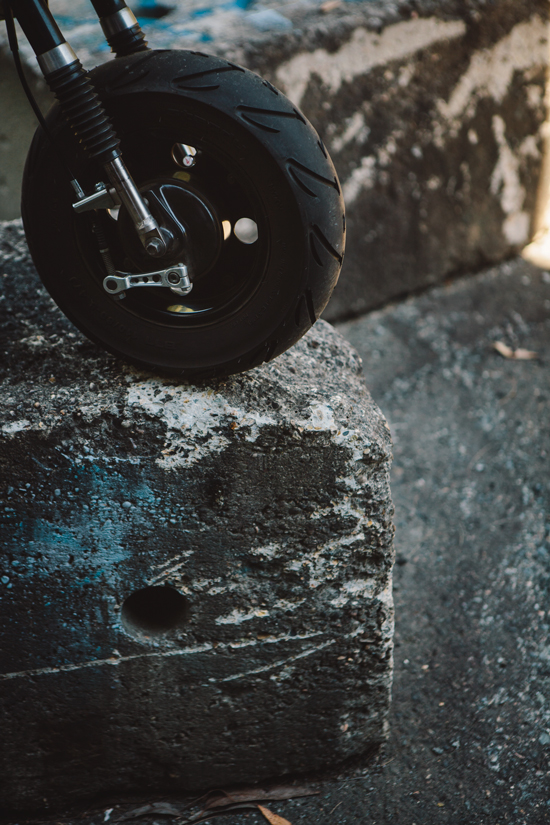 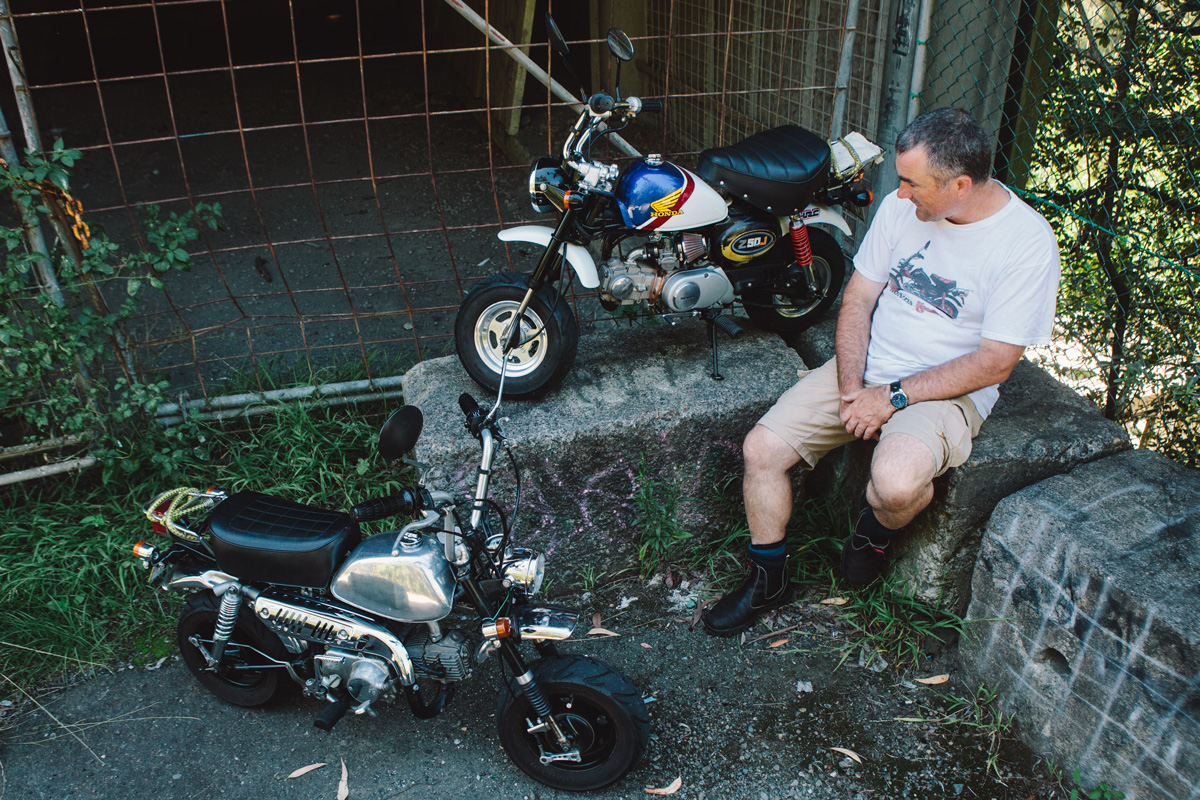 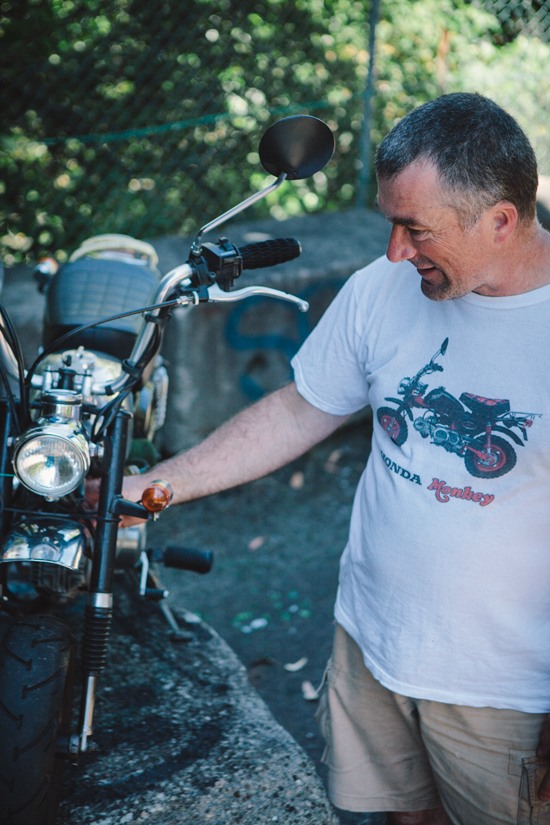 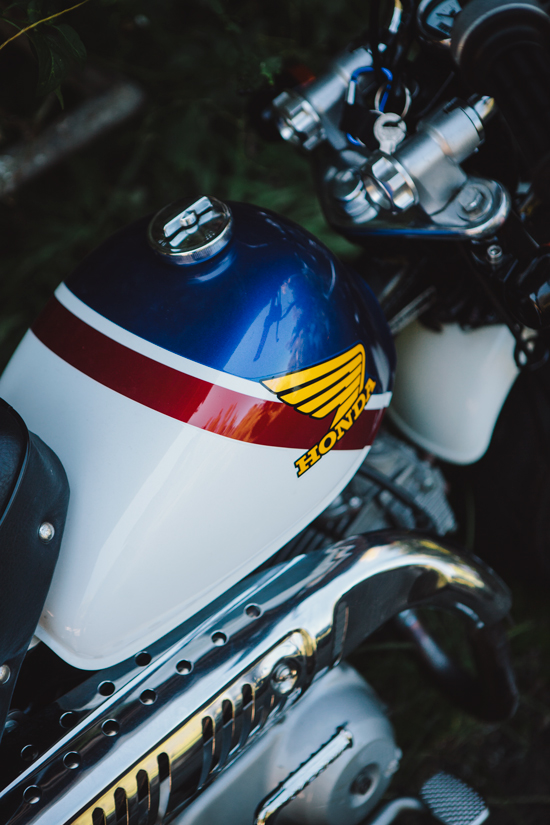