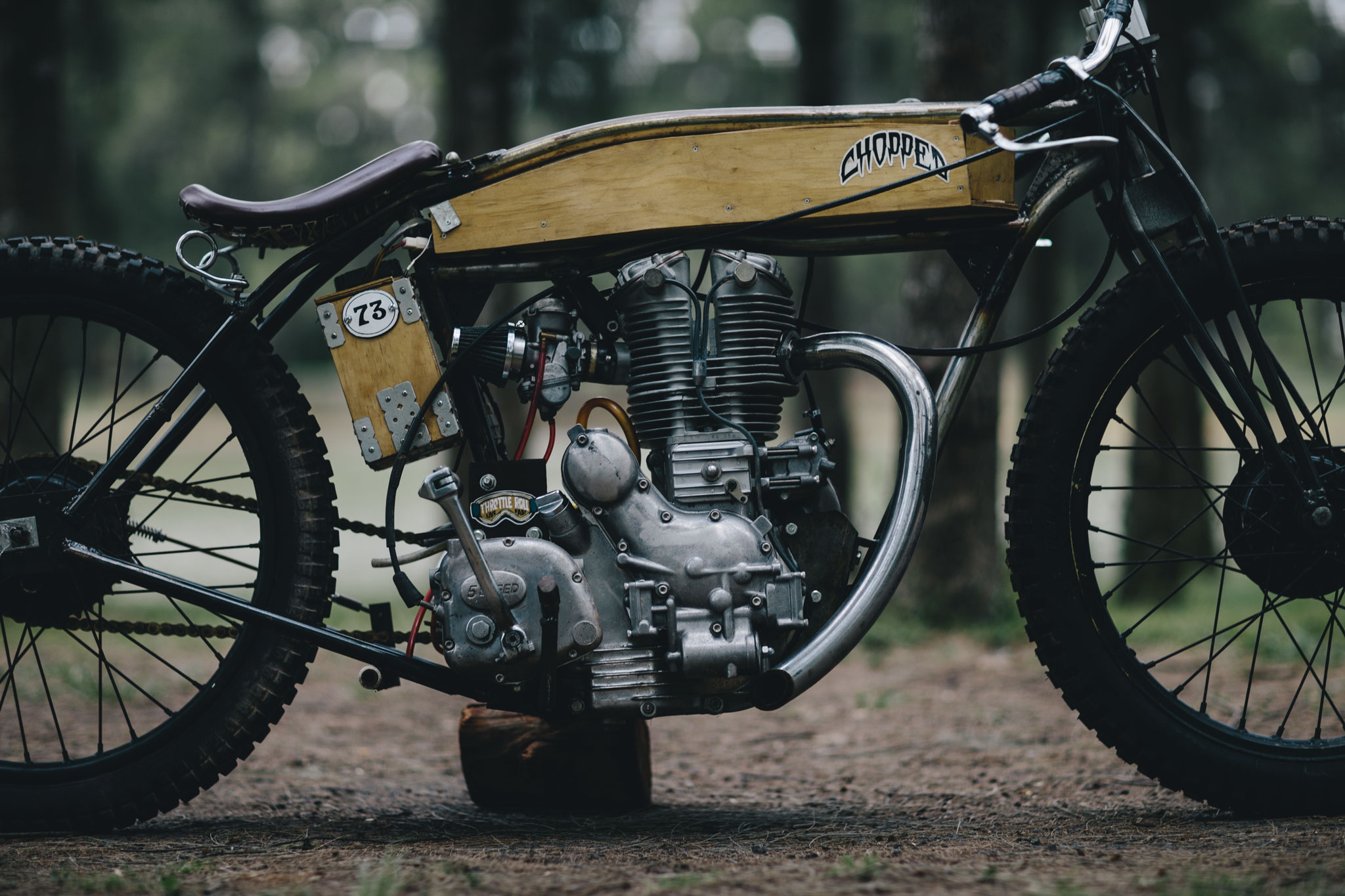 This is a machine that is Frankstein’s monster in motorcycle form – which is definitely a good thing. With parts being borrowed and wrenched from a variety of machines that is wider than  Oprah’s pant suit size, Carl’s is a patchwork bike with a ton of character. 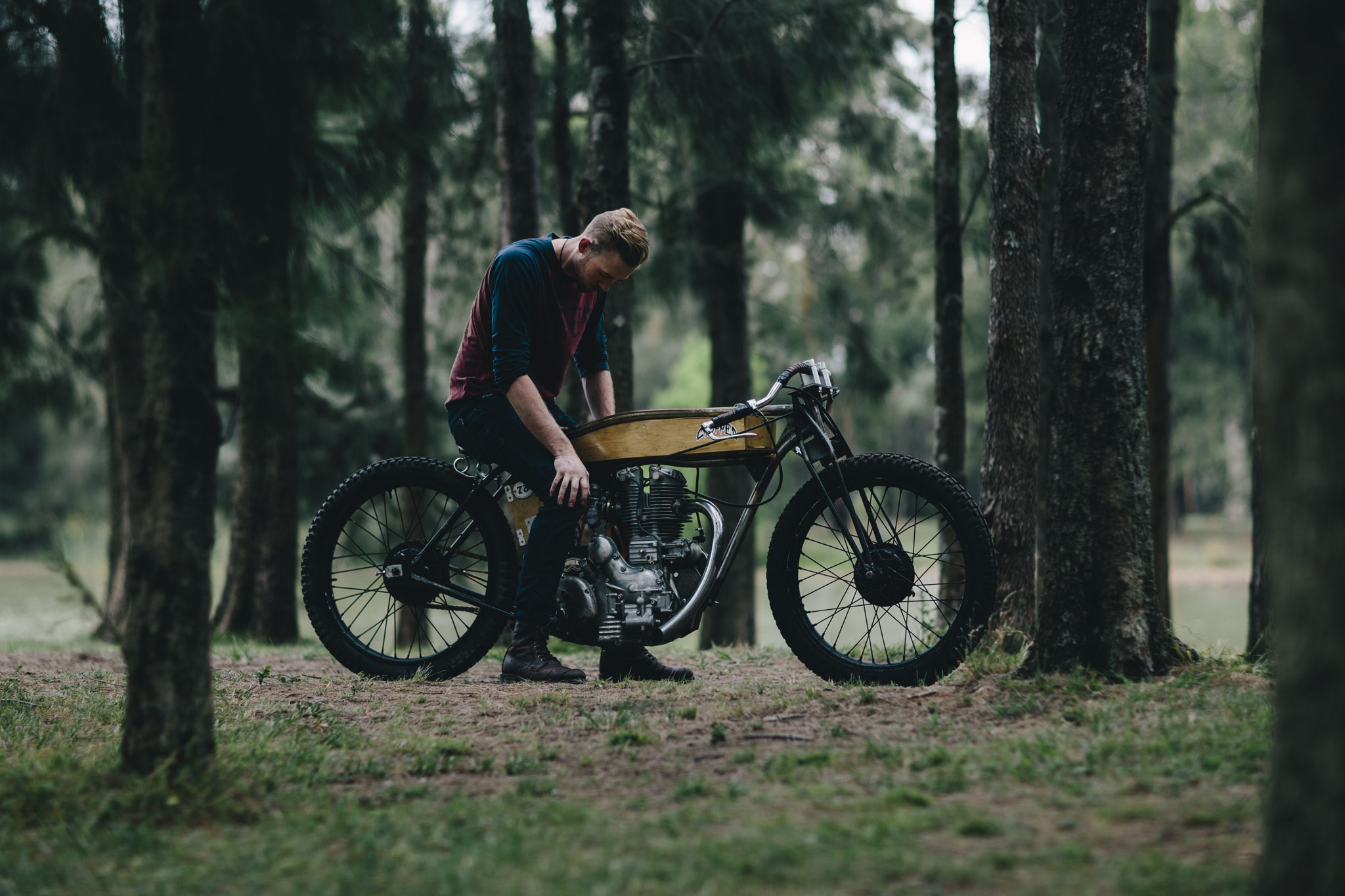 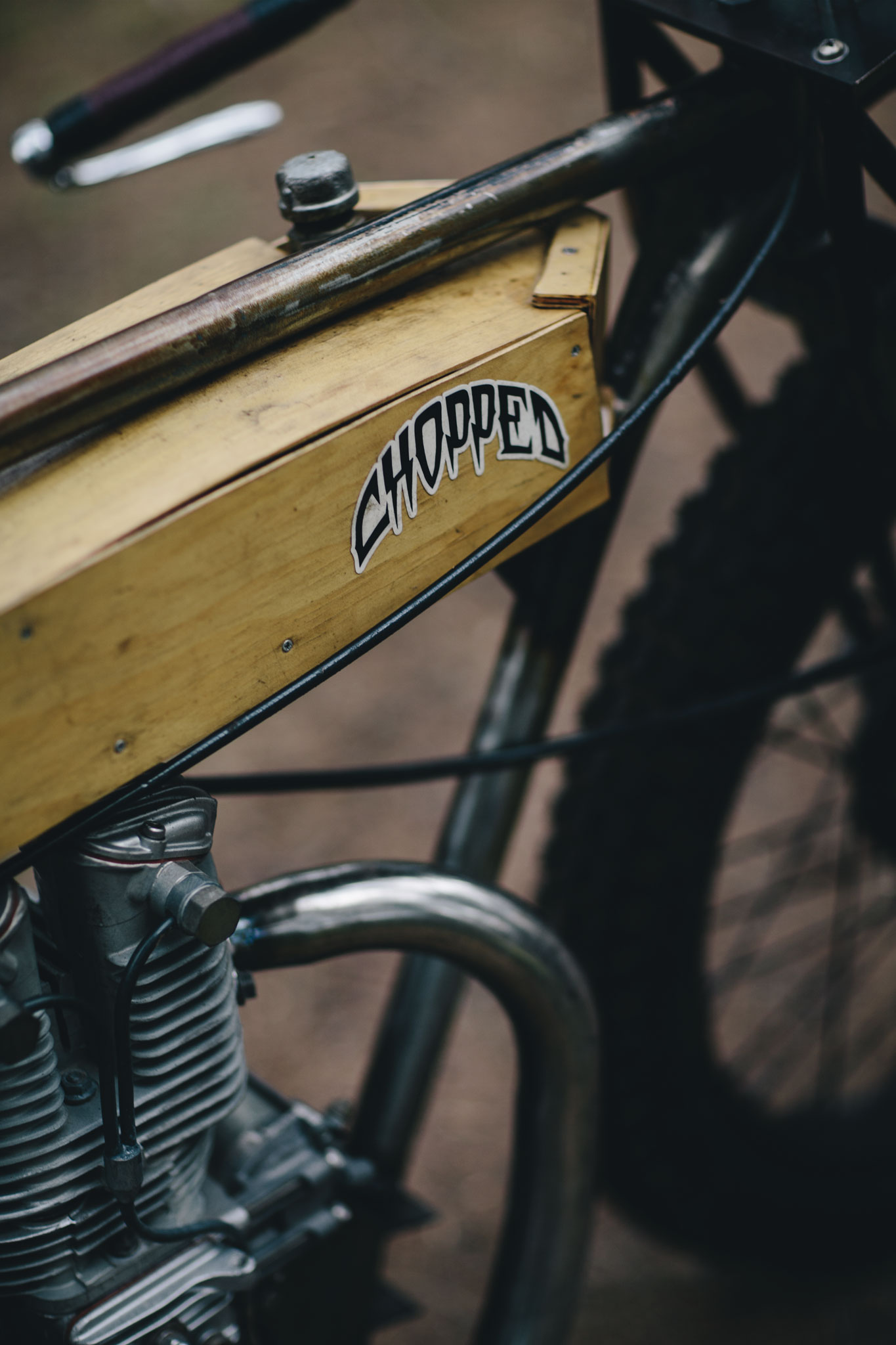 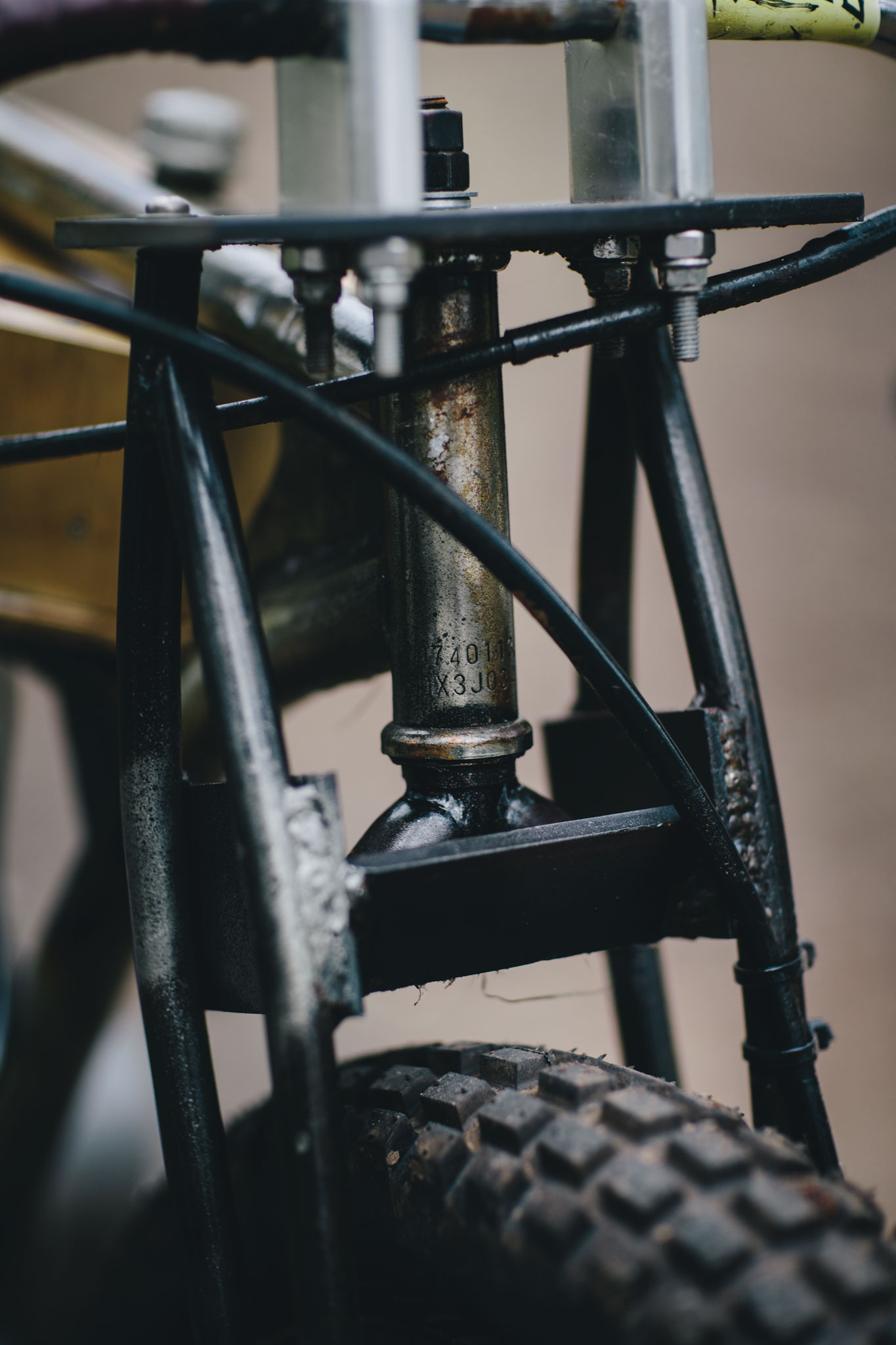 Starting life as a bicycle, this was once simply a pedal machine with beach bars, cream coloured tyres and simple, flowing lines. “I had found it on gumtree a couple of years back with the intention to turn it one day into a board tracker. I figured an old style bicycle would be a good start.” At the infamous ‘Chopped’ festival that Carl would source the majority of his inspiration for this ambitious first build. “I did look into buying a completed old bike, but that wouldn’t have been anything new. I wanted something that stood out. It was around that time that I had discovered Board Track racing. I loved how simple, raw and elegant these machines were. There’s nothing like it! Essentially a bicycle with an engine, no brakes, no gears, and a kill switch. It’s no surprise that they don’t race these anymore.” 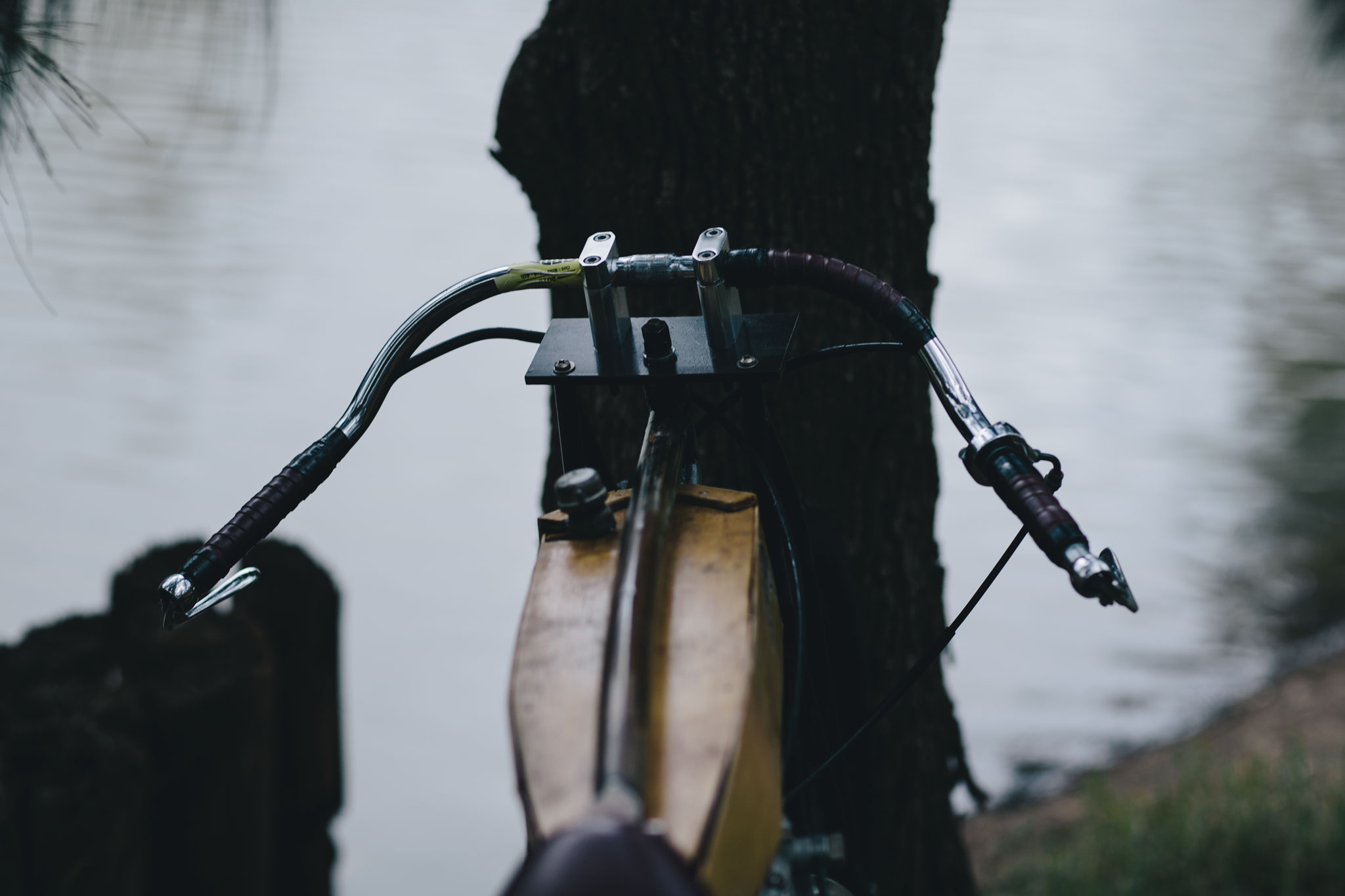 And so the would be board tracker build gained traction. This version would have more luxuries added to it than it’s inspirational counterparts – such as brakes and gears. “I wanted a bike that was reminiscent of this old-style racer, and one that could fulfil my dream of racing it at Chopped. I wanted to embrace the rawness of machines with this build, with plenty of patina. So much of the bike would be left raw, or with only a little clear coat.” 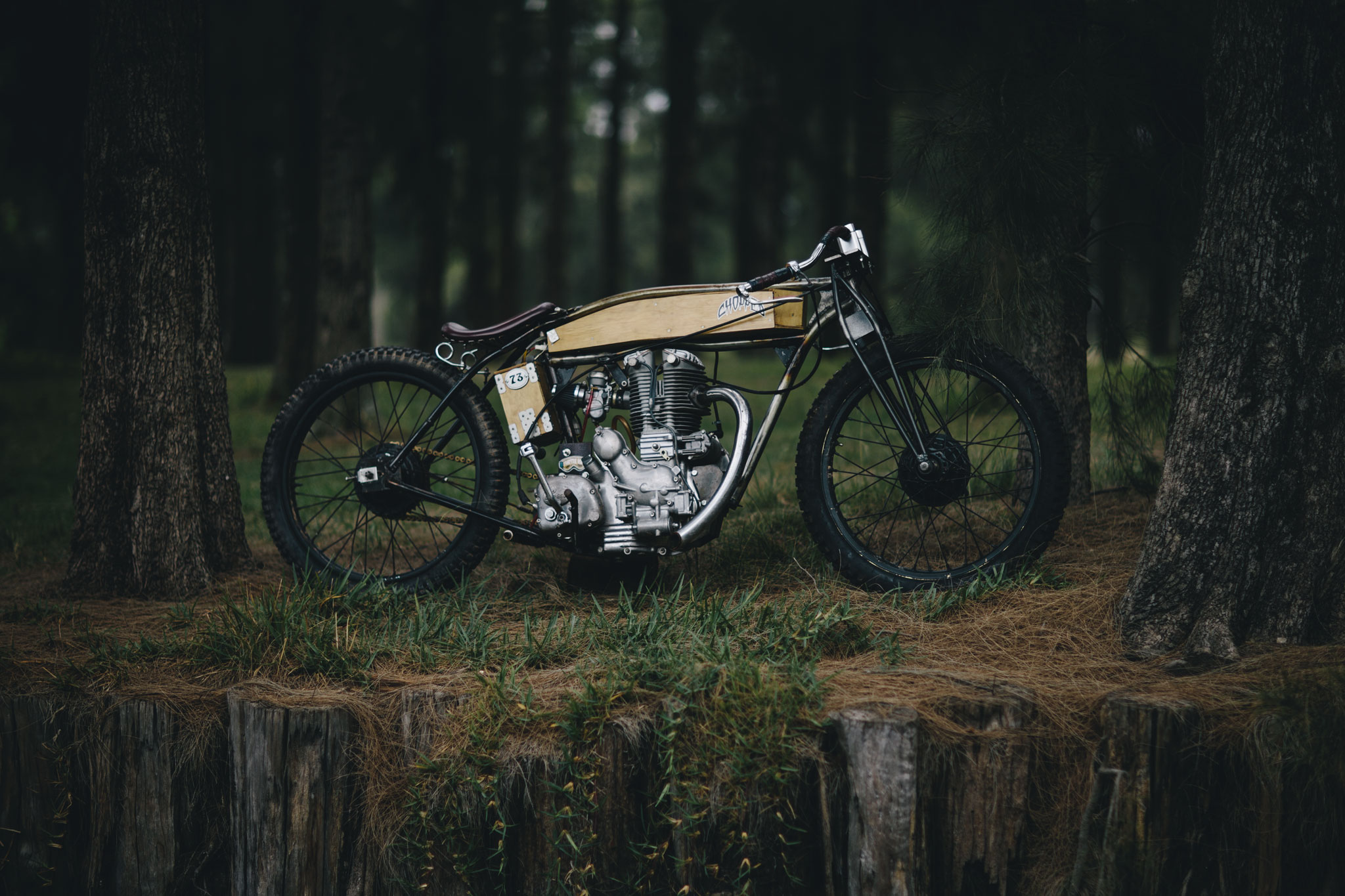 This vintage inspired machine would slowly take form as parts were gathered from whatever Carl could get his hands on. The wheels came from a DRZ400 and a TS185, whilst the frame which was once a bicycle ended in being a complete custom job. The engine/power house would be a 2006 Royal Enfield Bullet 500 – and so the bike might as well be dubbed a Royal Enfield Board Tracker. 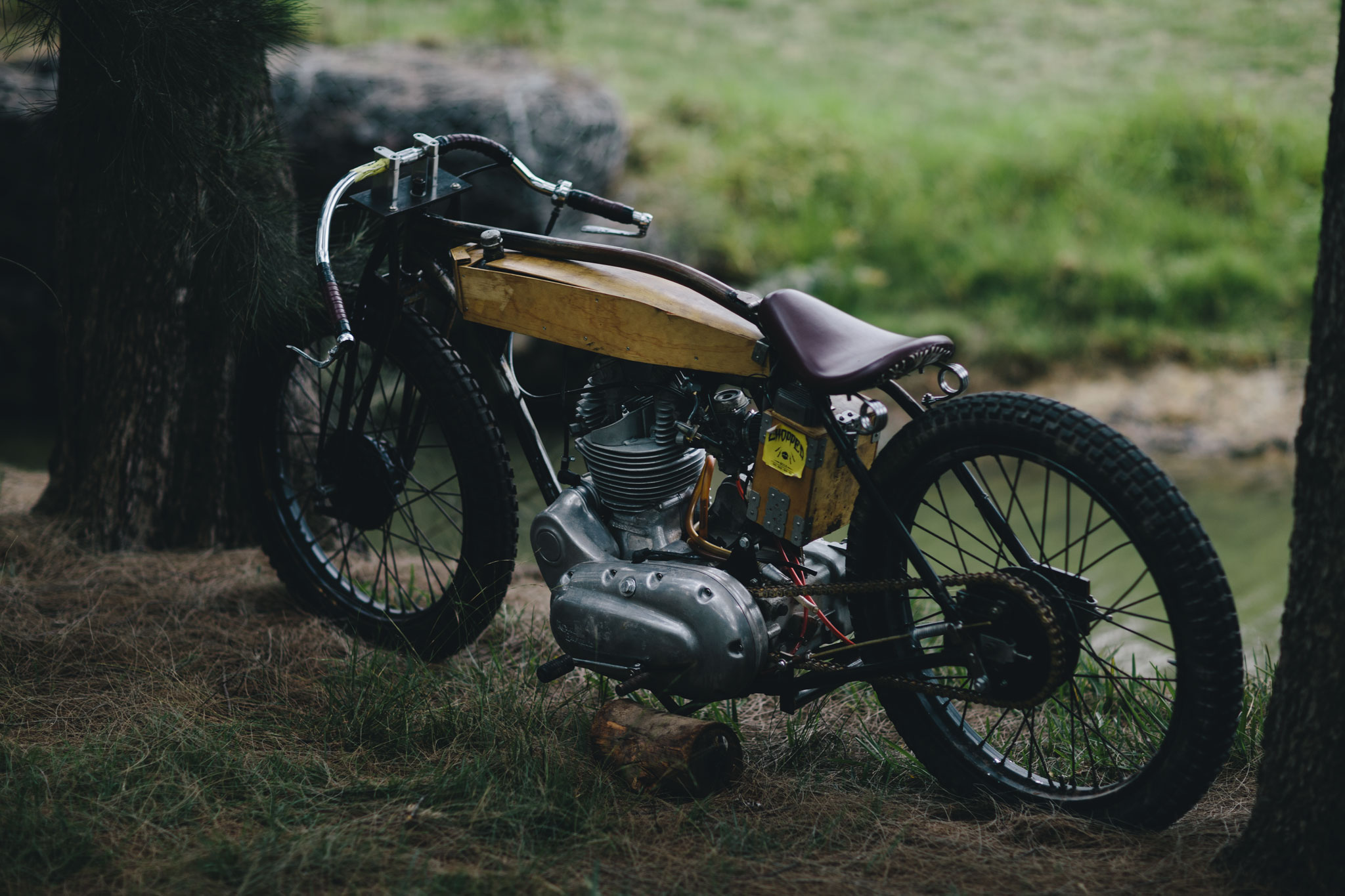 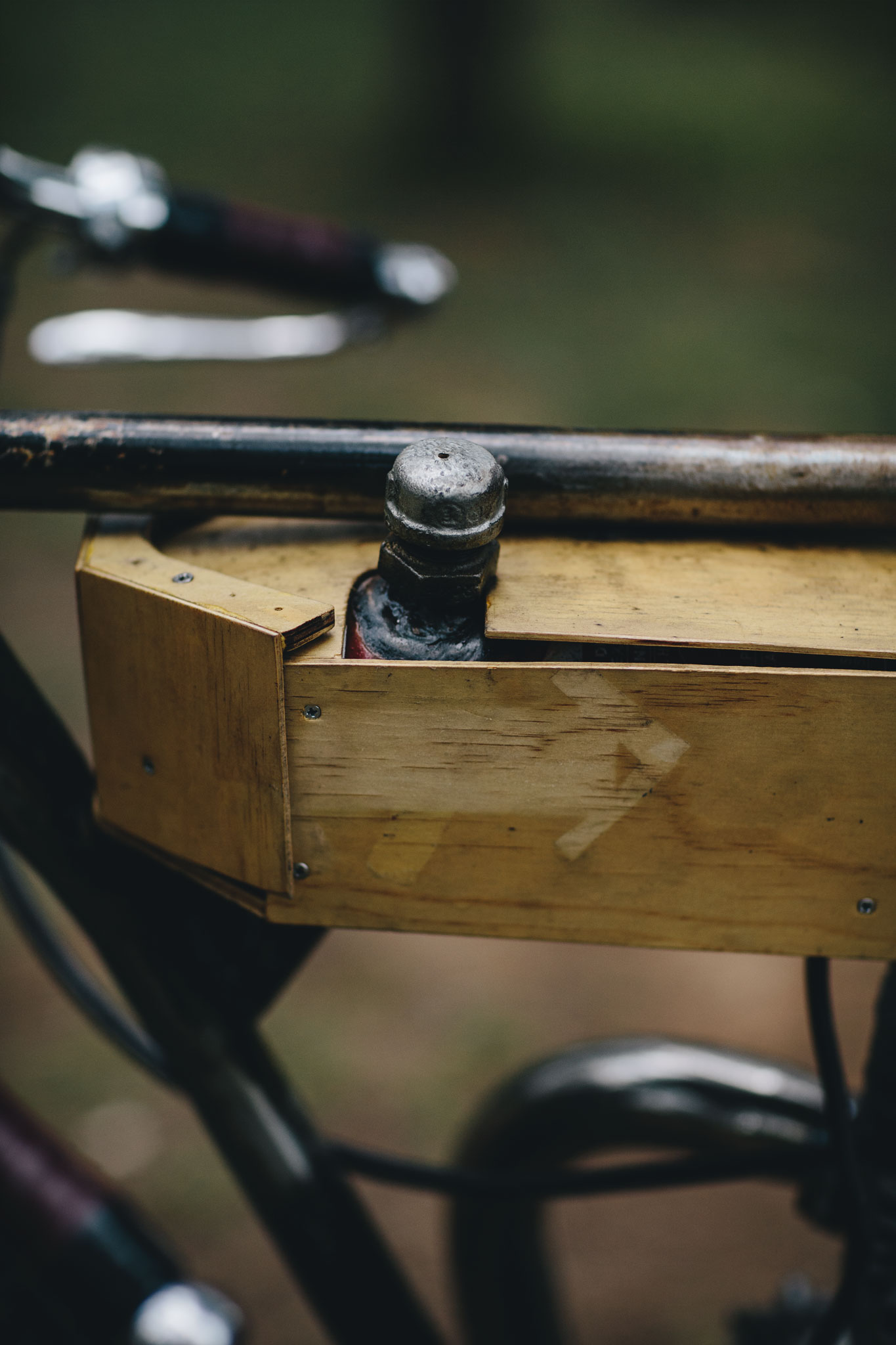 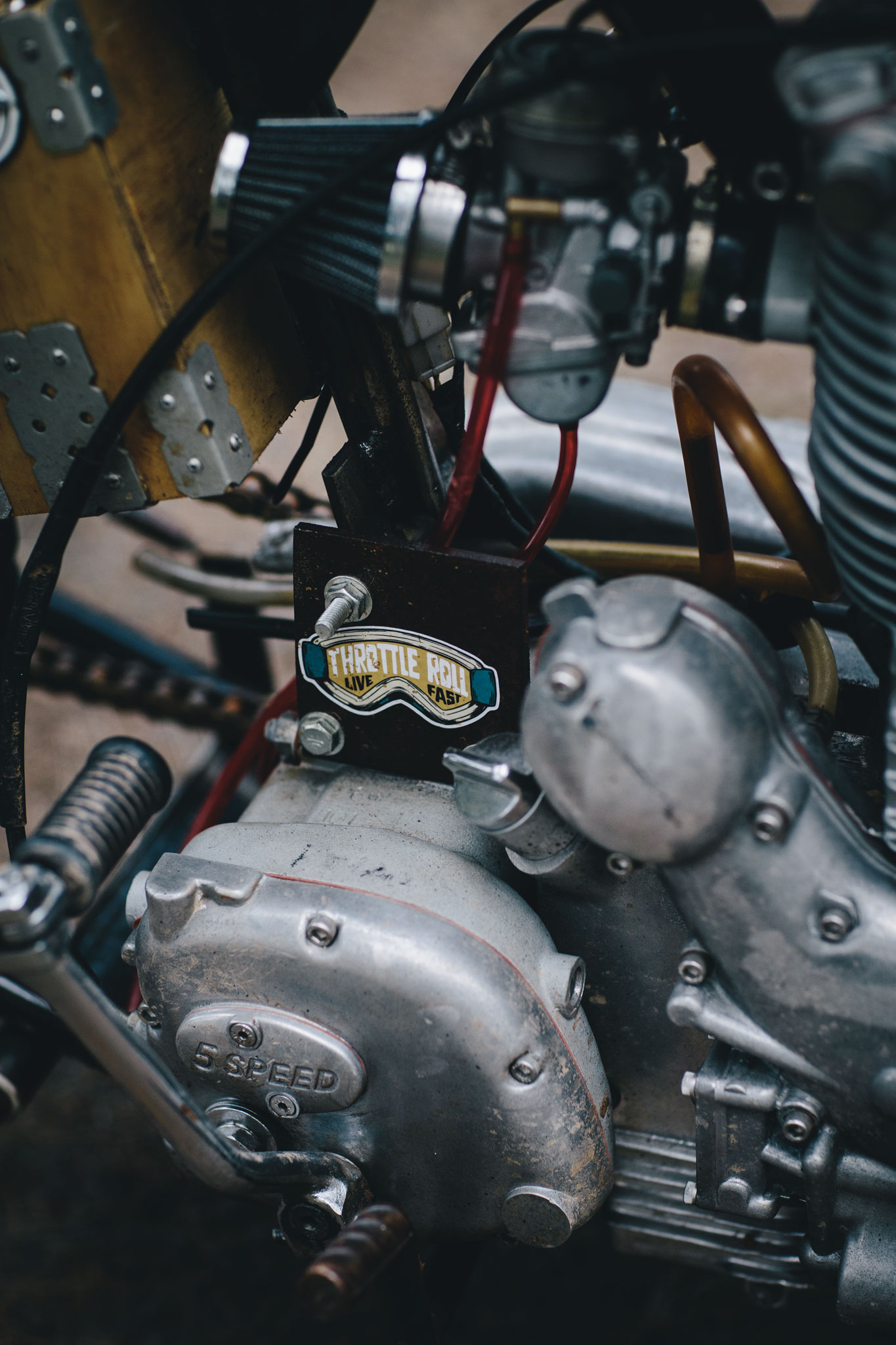 Carl chipped away on his ambitious project in his spare time as he juggled the luxurious working student lifestyle. “There were many hiccups along the way – mostly on account of the Royal Enfield engine becoming the power plant. The original mock-up of the bike had the intention of putting a smaller 250cc engine into an extended bicycle frame, which would’ve been much more simple and easy, but not the path I would go down.” 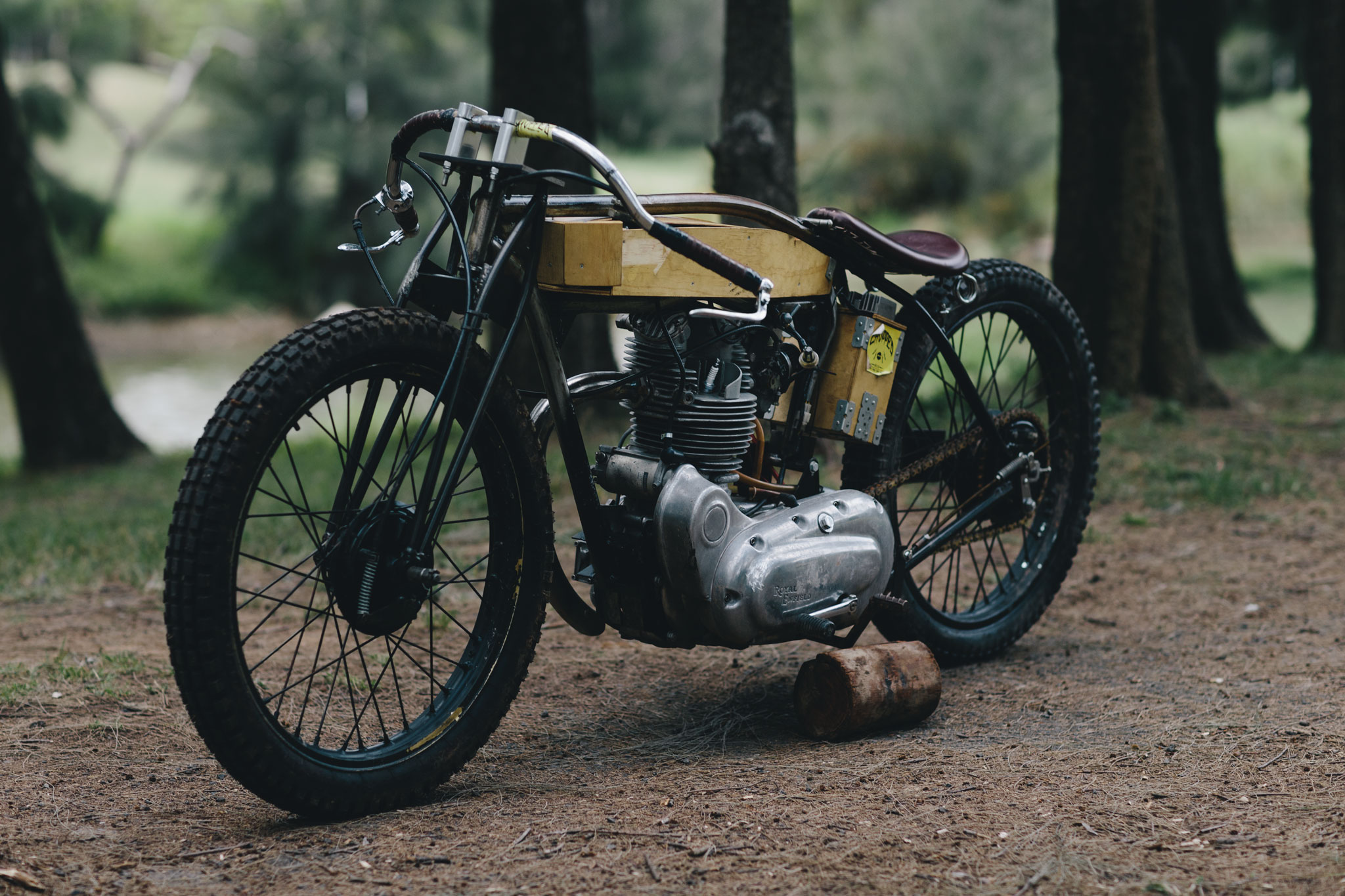 It would now be 4 weeks until Chopped festival, and so to make his dream a reality Carl worked away late into the evenings. Initially wanting to cram his Bullet engine into a bicycle frame, this proved to not work out as he planned and so most of the bicycle frame was scrapped as he welded together something more appropriate. 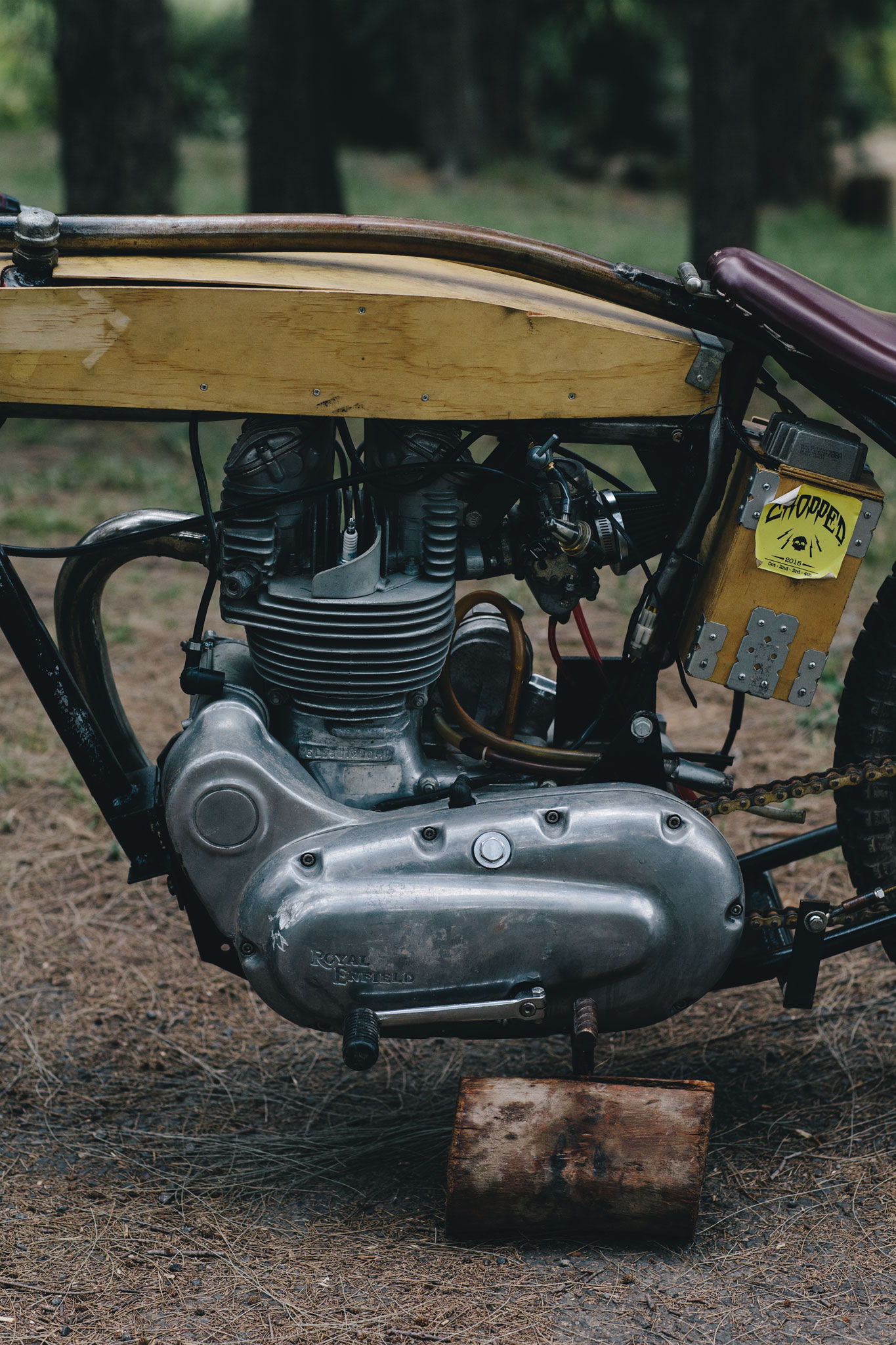 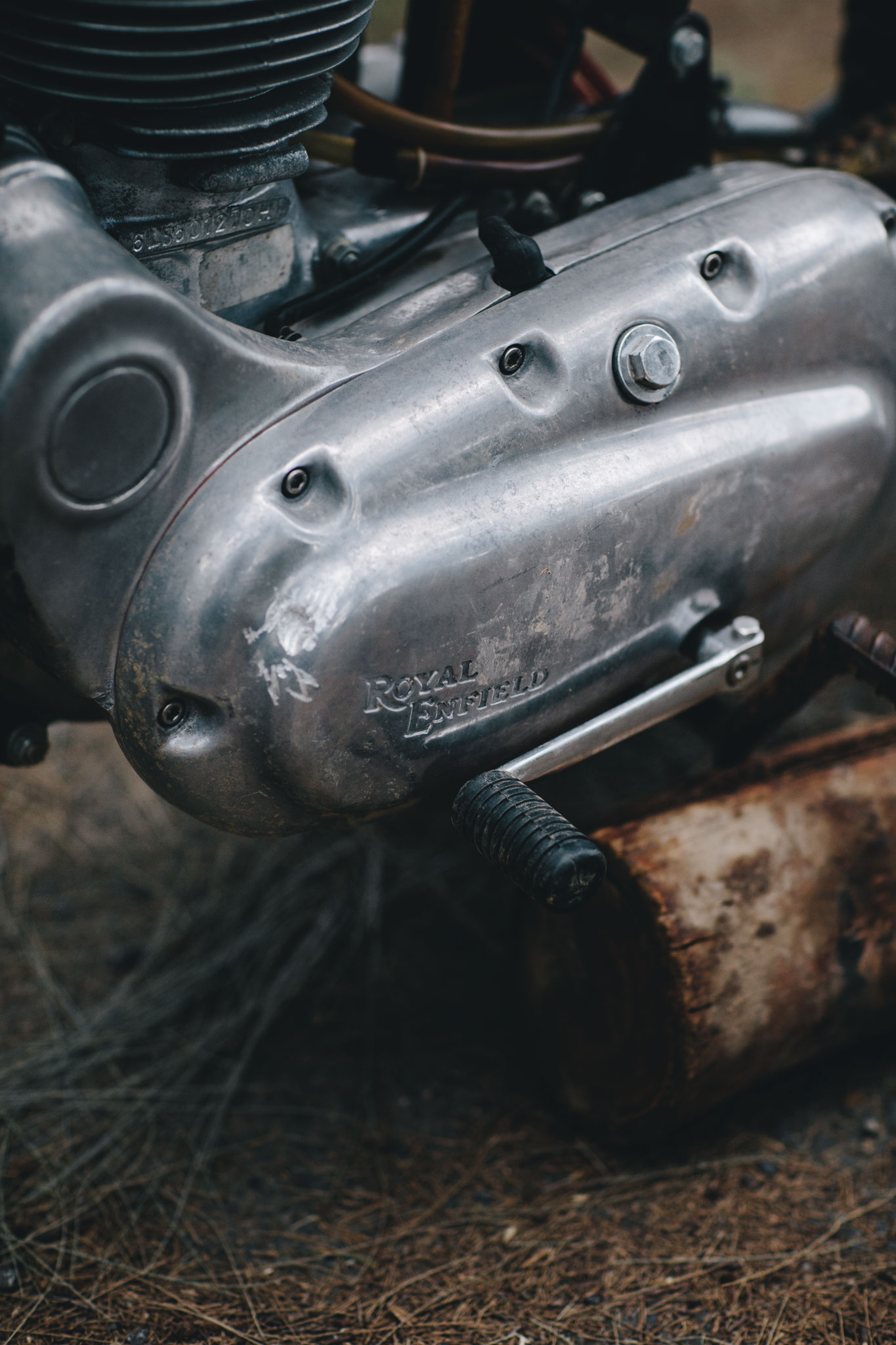 1 day to Chopped, the pressure was now on. “I was supposed to be leaving by now for the festival, but I still didn’t have my front forks or even a tank! I spent most of what little time I had by making the front works, while a mate of mine helped make a timber tank with some ply. In the end we did it – we finished the bike, and I raced it at Chopped. I haven’t stopped smiling since. It’s a great thing saying you built a bike from scratch!” 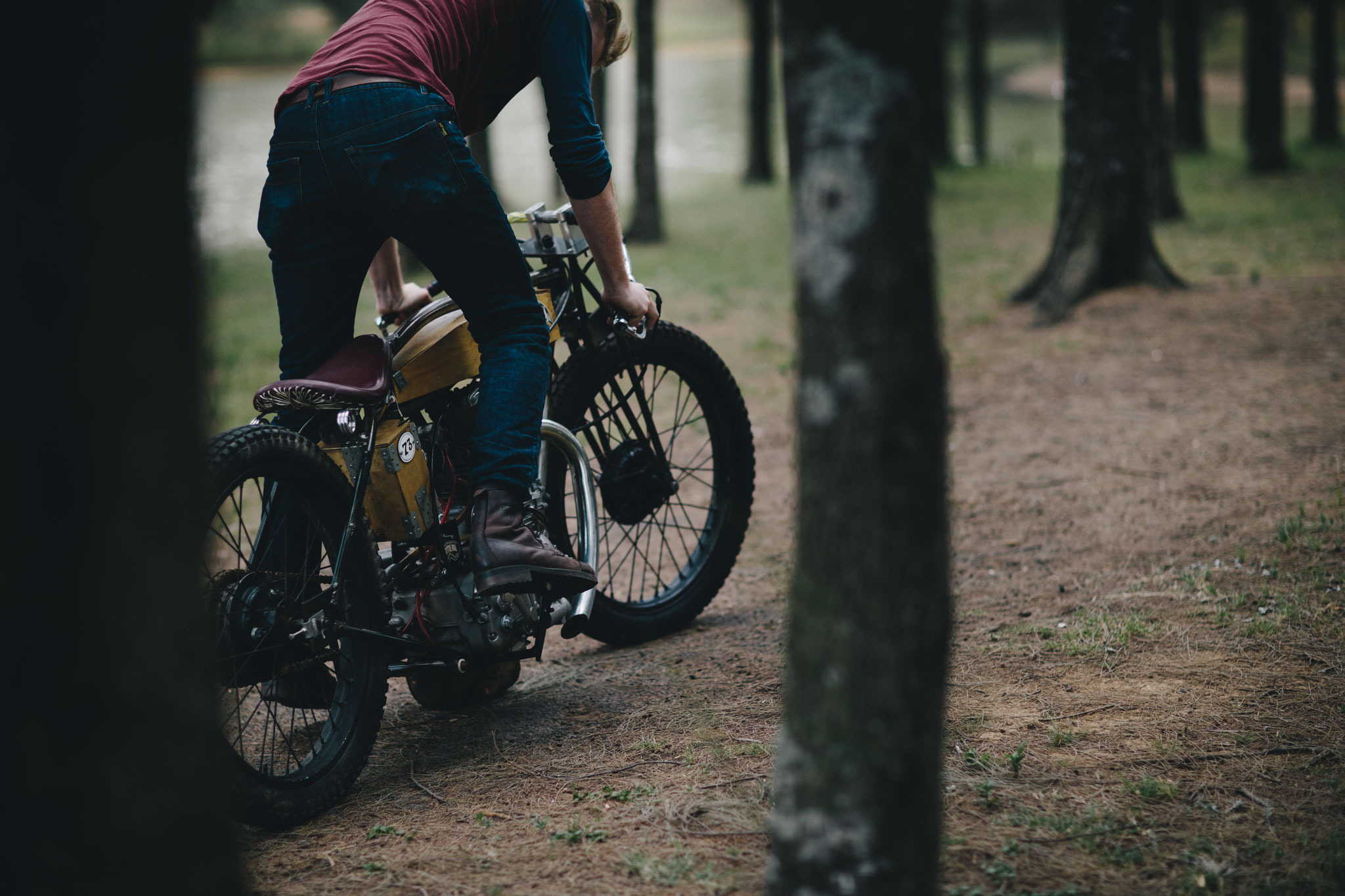 “That’s what I love most about this bike – I built it from scratch. The only parts purchased were the wheels and the engine, everything else I fabricated. I’m no tradesman, but all the work I’ve done on the bike I taught myself. I learned how to weld and how to machine metal.” 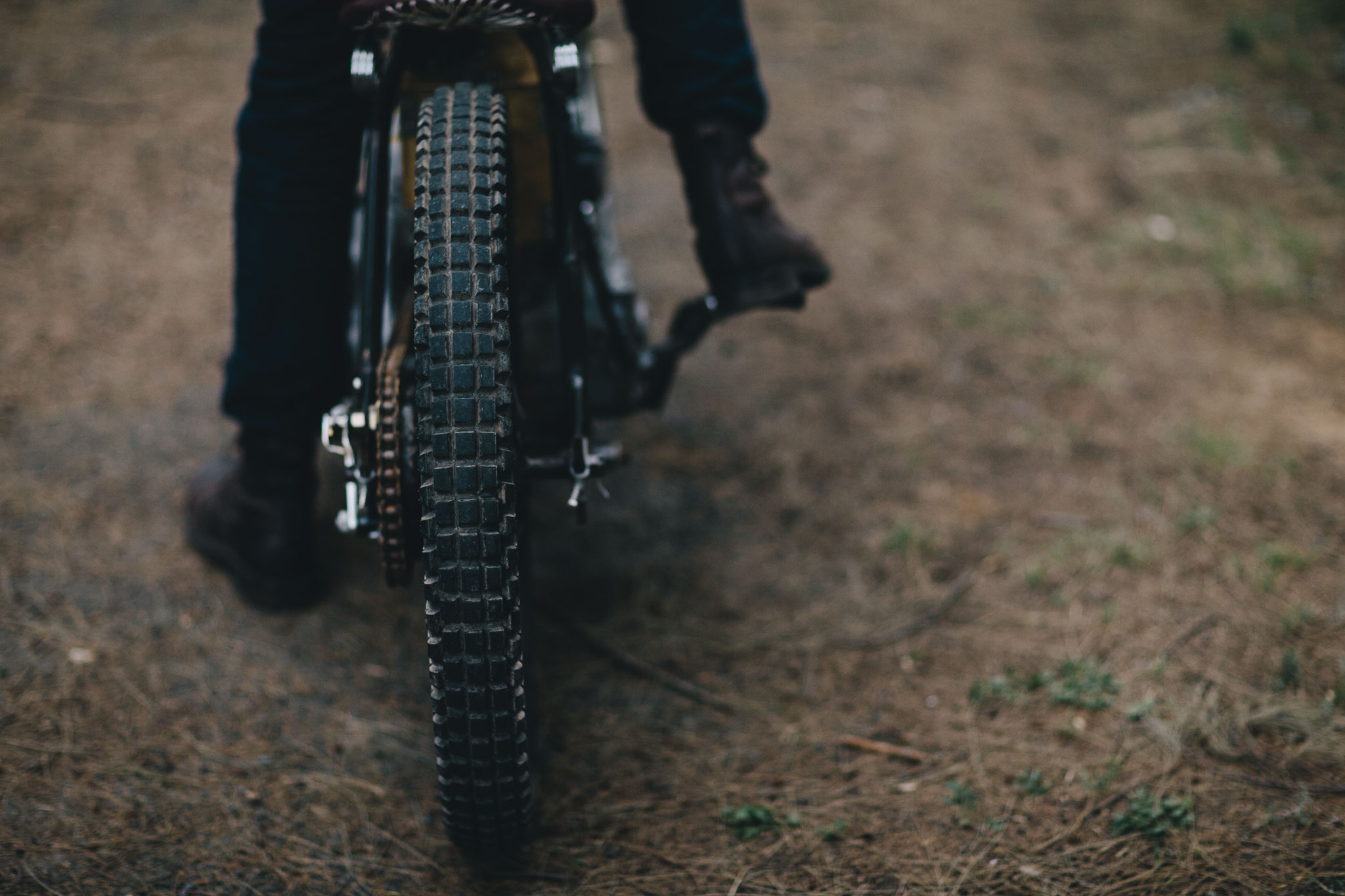