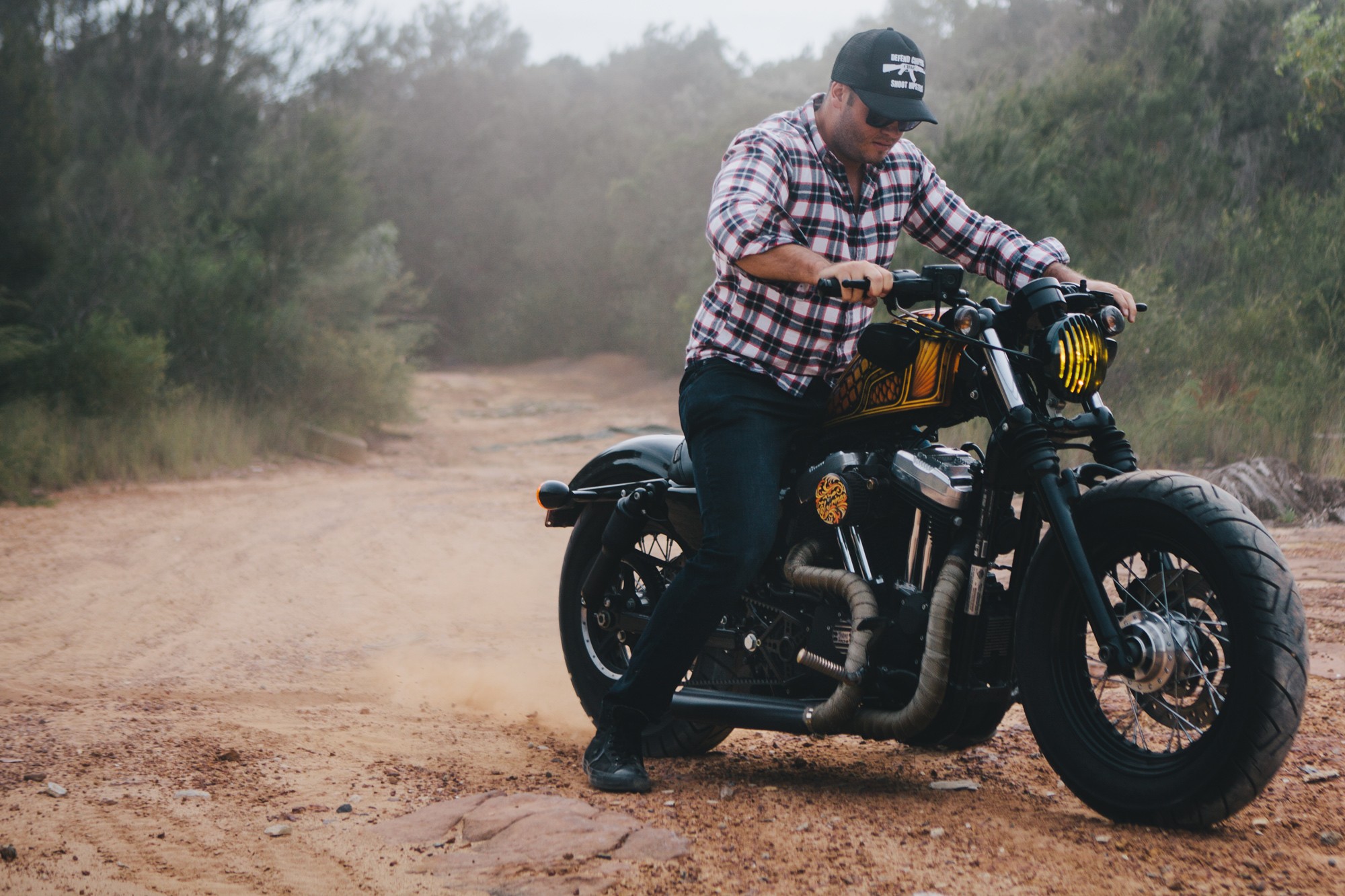 Chris bought his 2012 Harley-Davidson Forty-Eight completely stock and with barely any Kilometre’s on it, but it didn’t take long for him to start ripping parts off it as soon as he got his new steed home. From there the bike would take on a new look, with its crowning jewel paintwork. 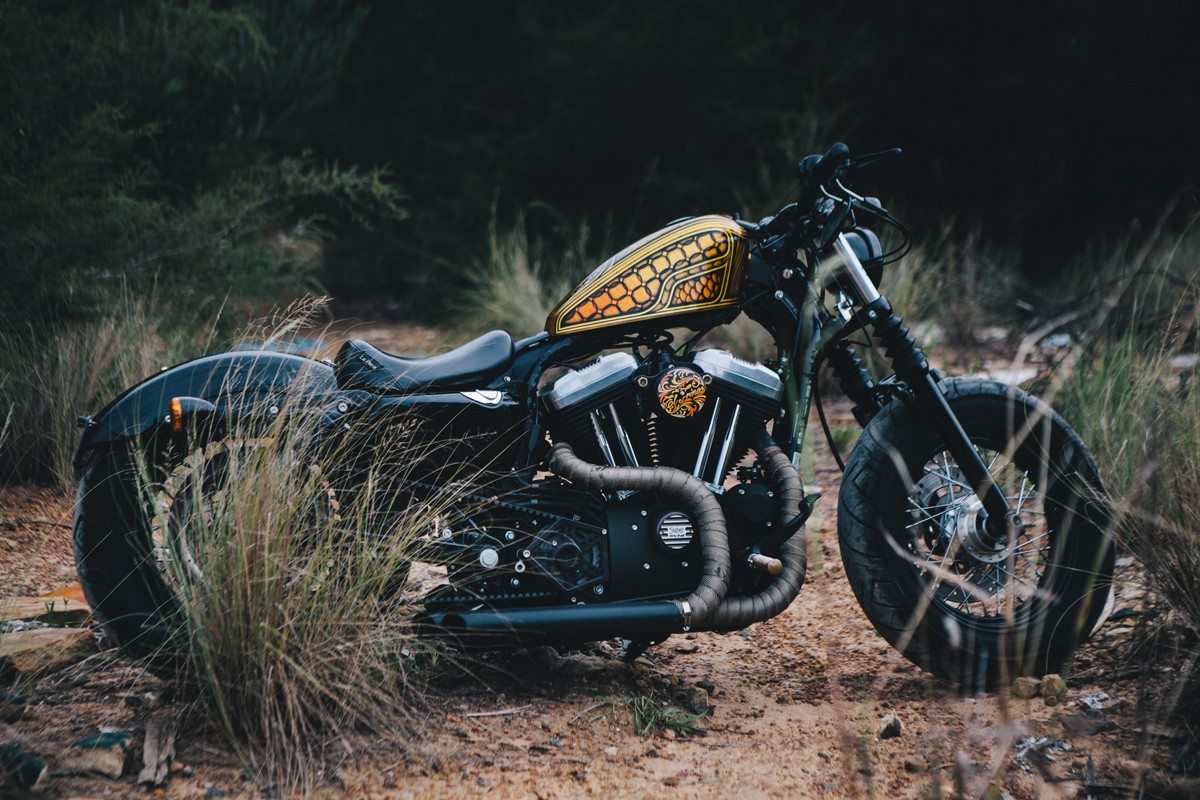 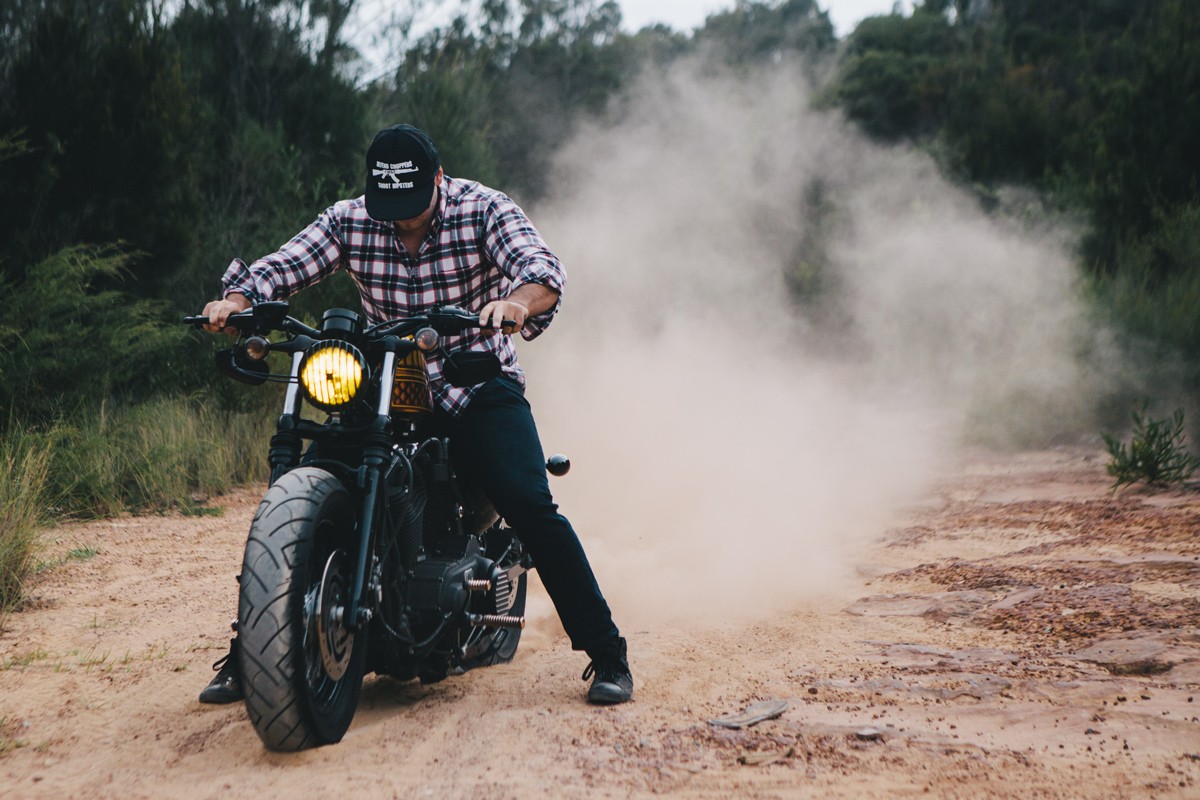 Chris has been riding for years, but mainly on dirt with motocross bikes. If he wasn’t bashing through the dirt and mud, he was on his street registered trail bike zipping through the back streets, hitting speed bumps, and as he says “other stupid shit”. Chris wanted something more however, and so was on the search for some proper road wheels. “I could have gotten a supermotard (and kept my licence for a fortnight at the longest) but I’ve always had an interest in stripped down custom motorcycles, and the ones that always peaked my interest were Harley Davidsons. Not the leather pant, bandana-wearing types, rather the minimalist bobbers with nothing more than a huge engine, no suspension and a set of handlebars with wheels. Ever since I bought one I haven’t looked back. I’ll always have a customised Harley of some sorts for a long time, I think.” 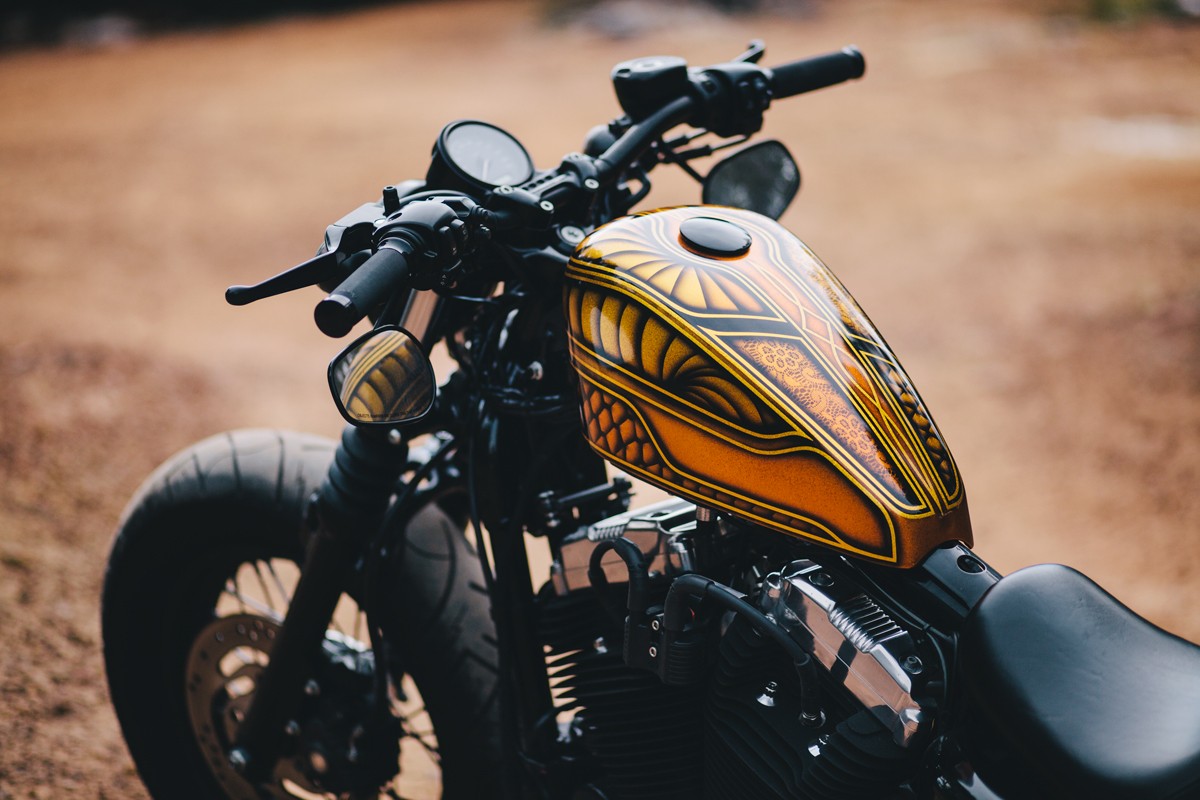 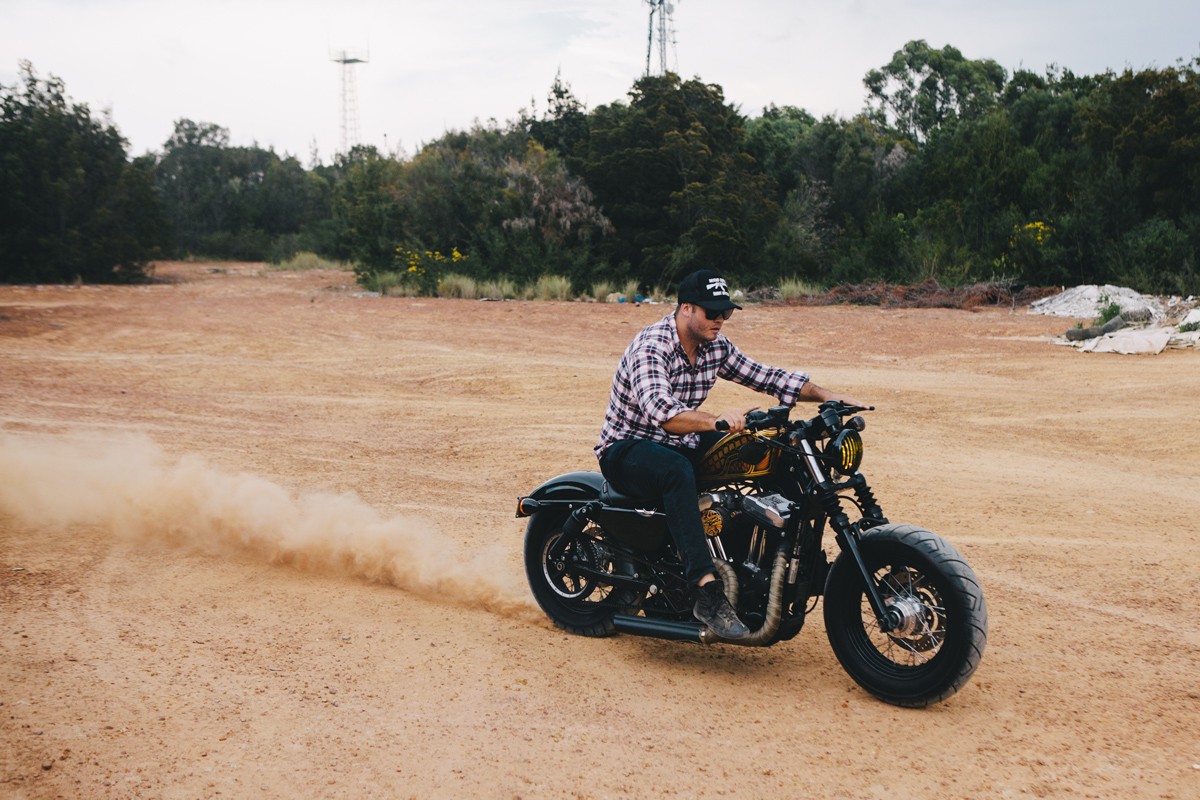 After grabbing his Forty-Eight still in it’s stock form, Chris got to work transforming it into the low down, loud machine he was after. “At first it was the usual simple stuff everyone does to a Harley – handlebars, pegs, intake and then make it antisocially loud. The bike had no direction and started looking like every other Forty-Eight around. Around that time my appreciation for old bobbers and choppers started to grow, the certain sub styles within the “cult” that is bobbers. I decided to take a modern twist on the traditional American Bobber and build something that would look cool sitting still, but still be 100% rideable, reliable, and maintain the good attributes that modern HD’s come with but combine it with an old school flavour.” 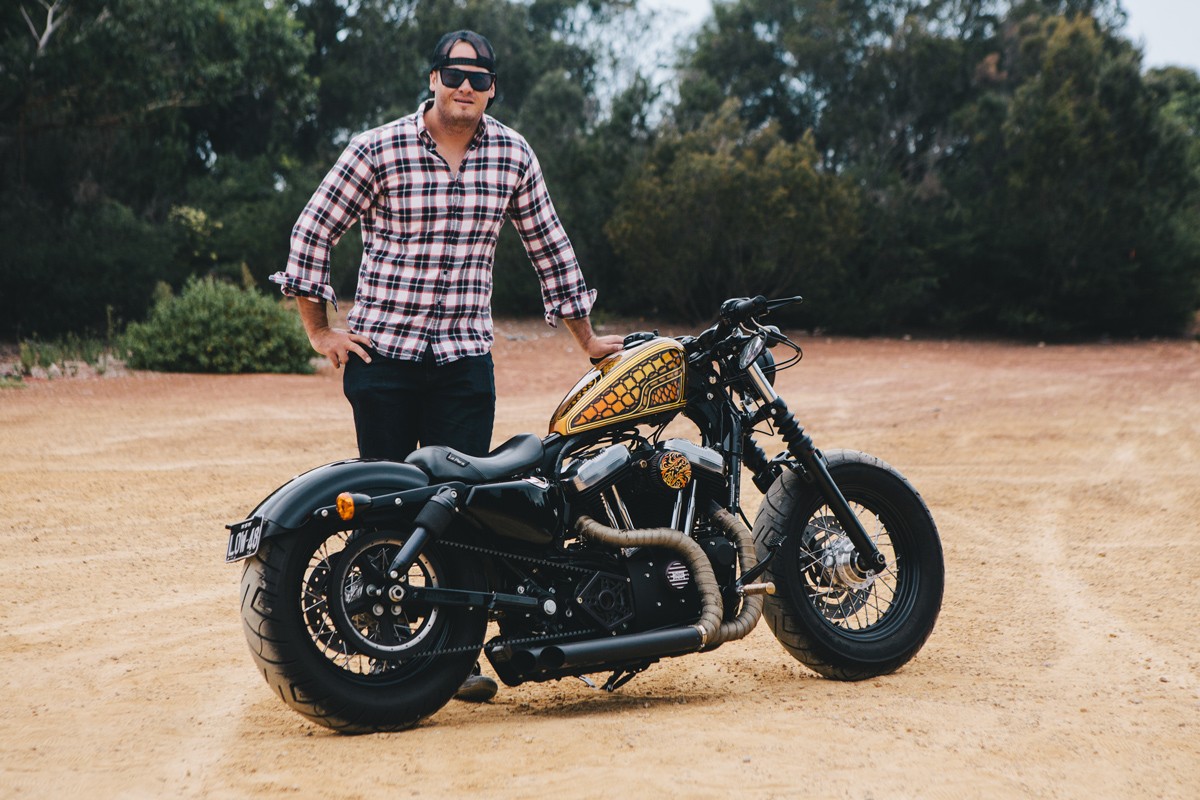 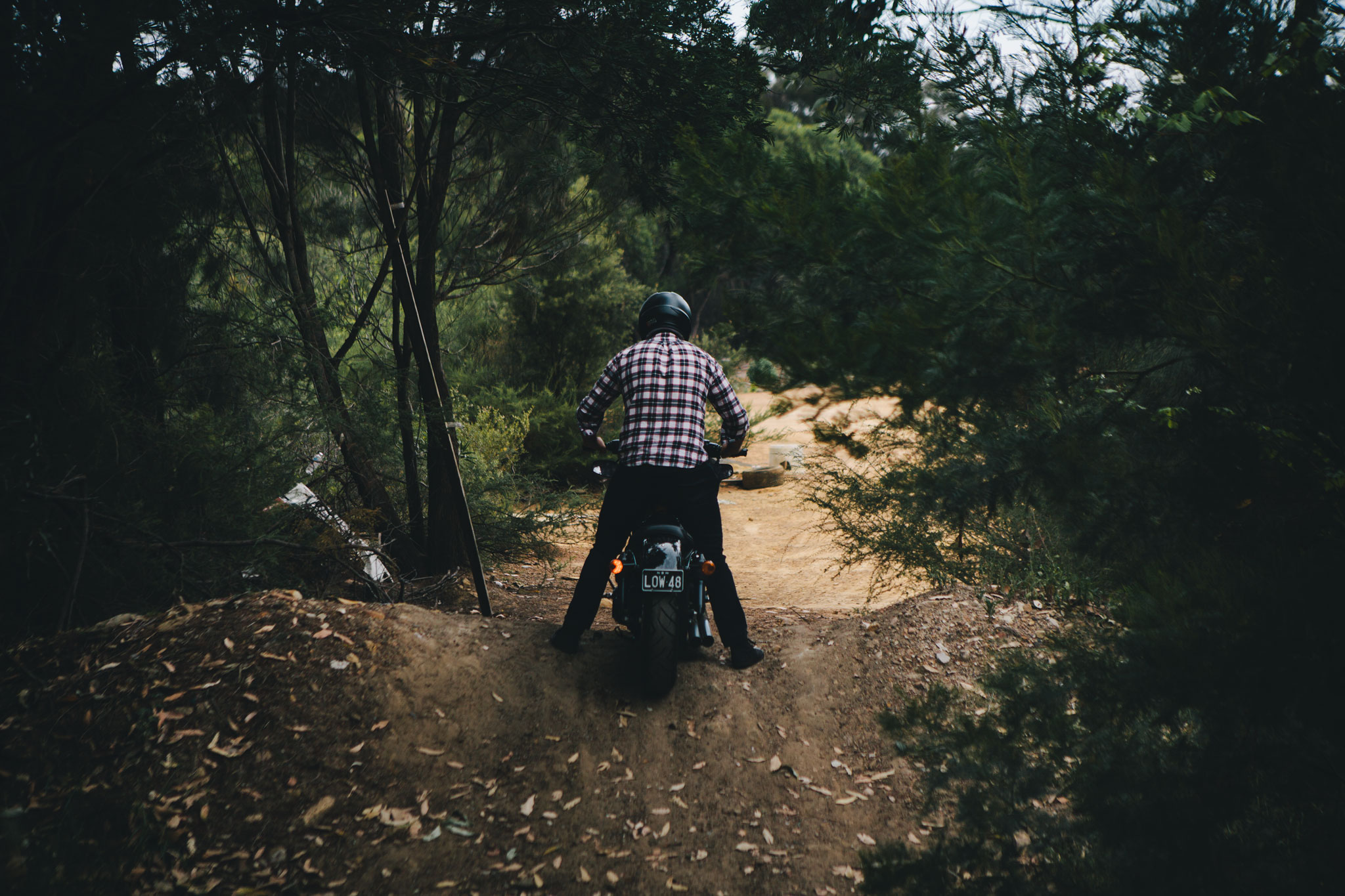 Jumping from dirt bikes to Harleys is quite a contrast in machines, but Chris gets to enjoy the best with both worlds as you find his Harley sitting next to his dirt bike in his garage space. “As far as differences in riding style, well they are chalk and cheese. For one, you barely sit down on a motocross bike; it’s a balance between being fluid on the bike and manhandling it to where you want it to go. Swap that with a bike that is 3 times as heavy and an engine the size of a small car and there isn’t a whole lot to carry over between the two, but when the rear wheel starts to come loose on the Harley the instincts kick in and it’s no problem.” 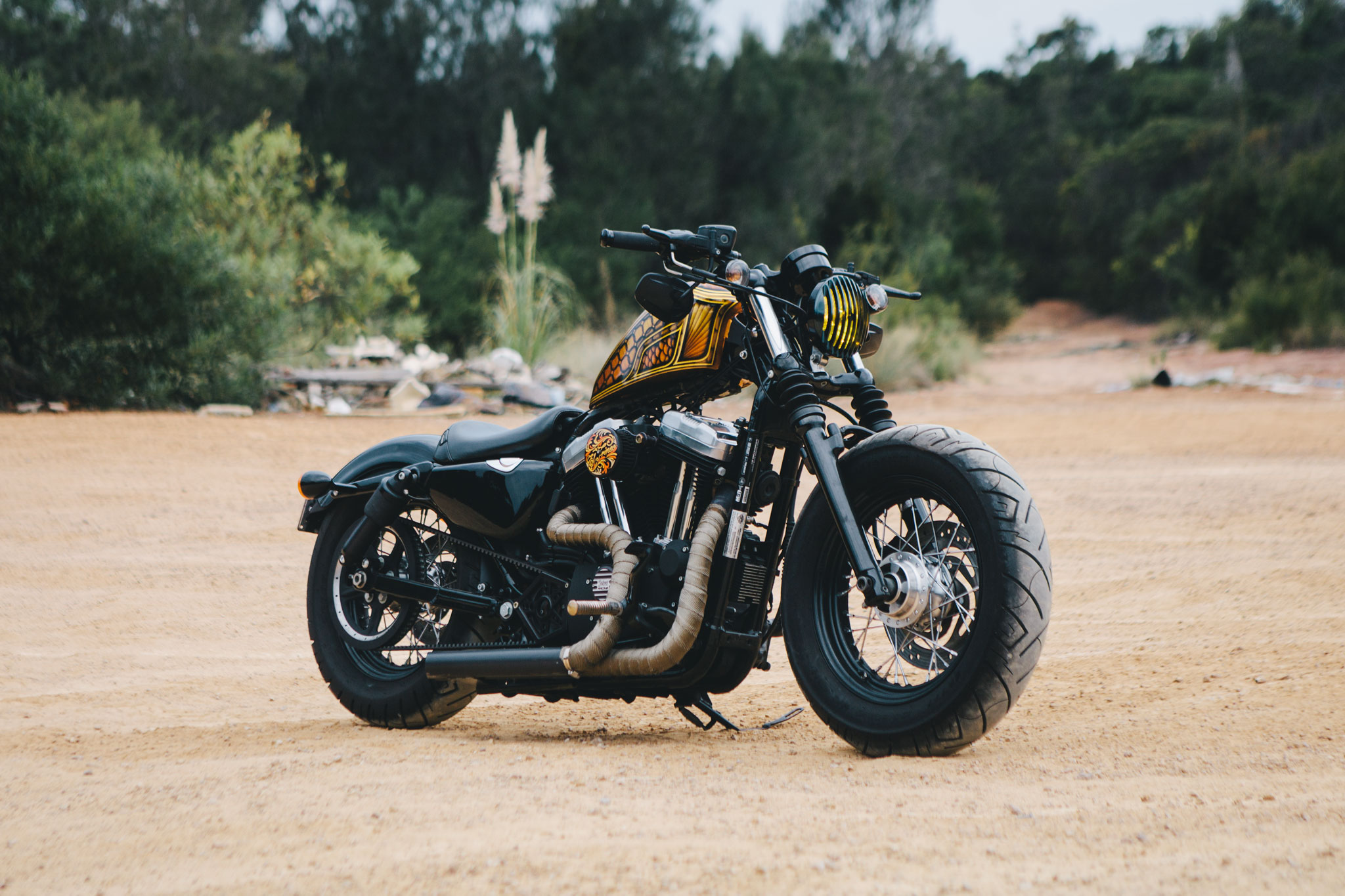 The first thing you’ll notice about this bike is the tank. Painted by Kyle Smith over at Smith Concepts, it’s an incredible work of art and truly the crowning feature of this machine. “Every time I go for a ride someone asks about the paint, in person it is a sight to behold.” It’s not just a visual treat, as Chris had some Bassani Pro Streets exhaust attached which create the best kind of audible V-Twin punch to the face. 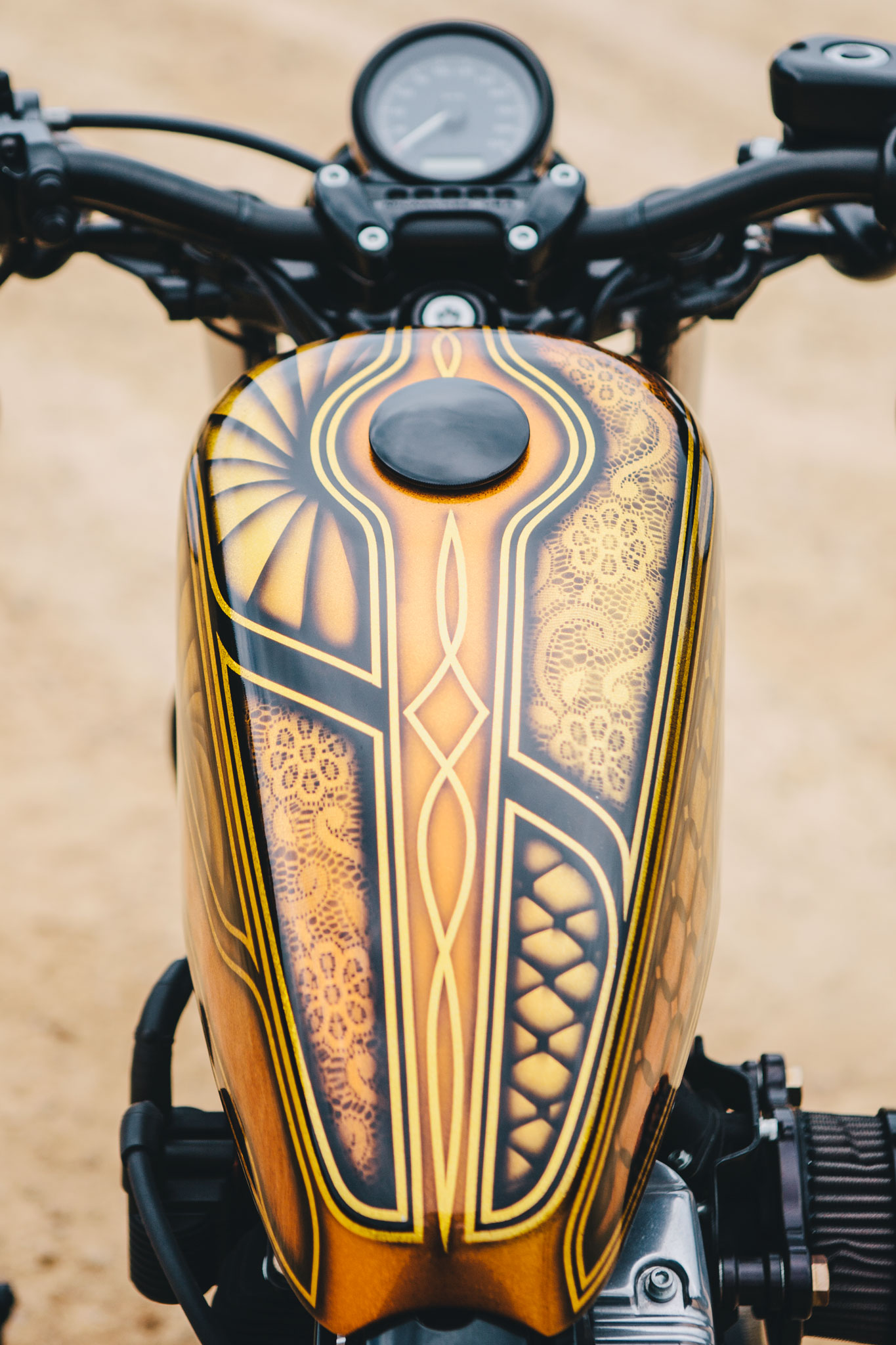 You’ll always find this style of bike nice and low to the ground, though Chris was not a fan of the stiff coil suspension. “It would beat me up badly when riding any sort of distance, and it handled shithouse. I added airbag suspension, this allows the bike to be raised up for hitting the corners, or dumped to have the tyre actually sitting on the guard with a few additional modifications.”

“I think the most work went into the parts you can’t see, stuff like hidden wiring looms, completely re-wiring the security module to work with the airbag compressor and making a 170mm rear tyre fit where it clearly shouldn’t.” 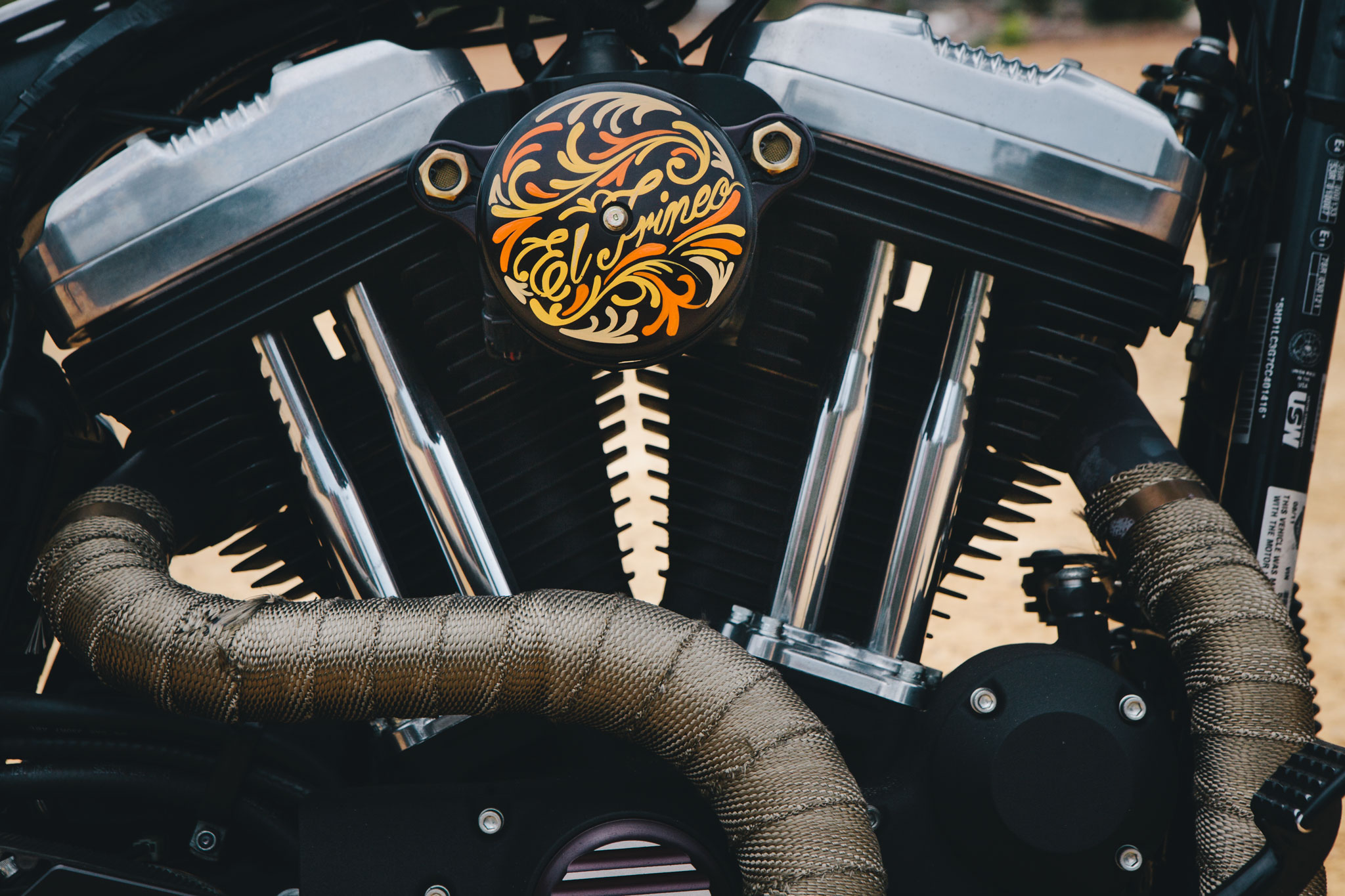 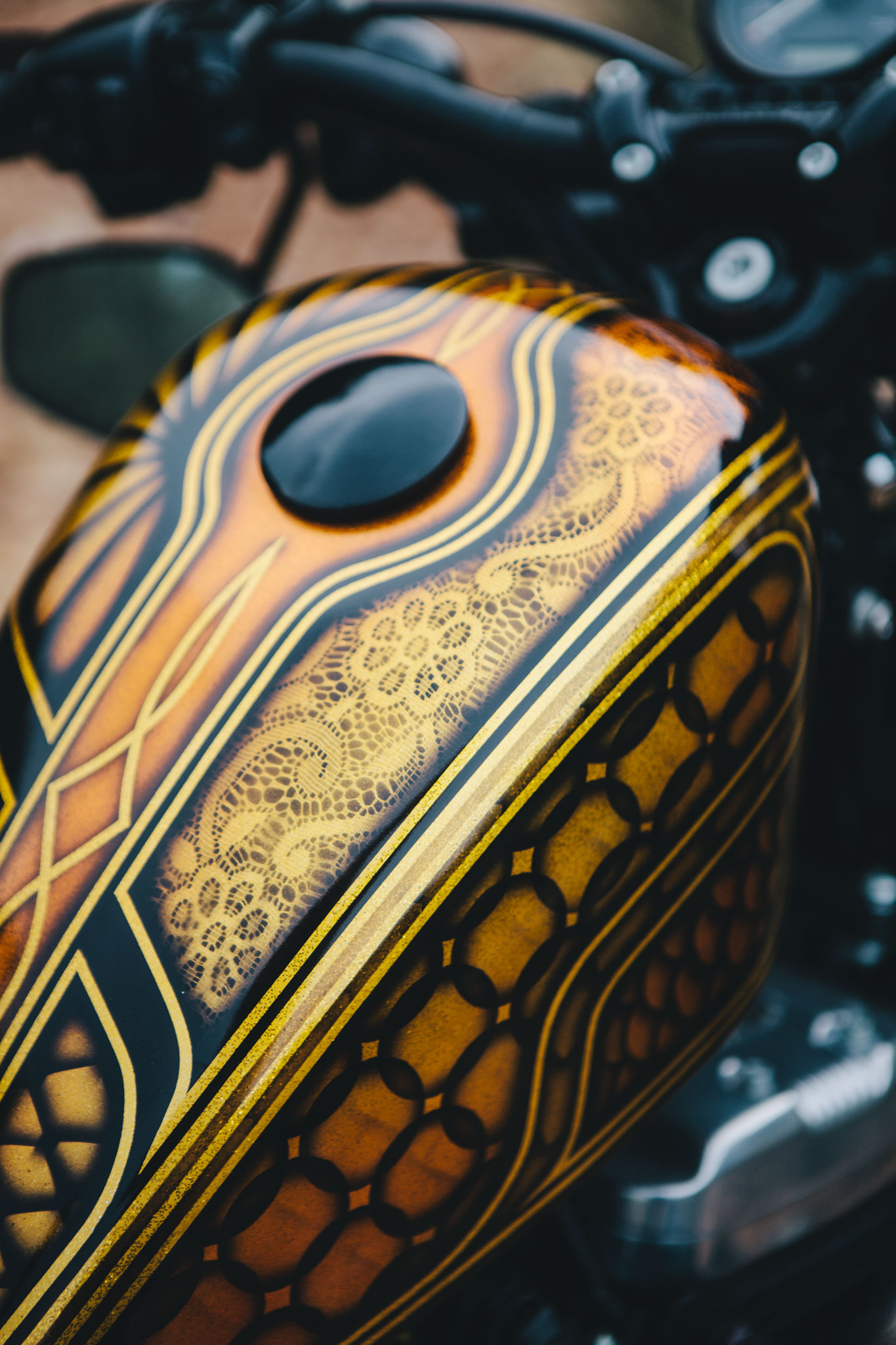 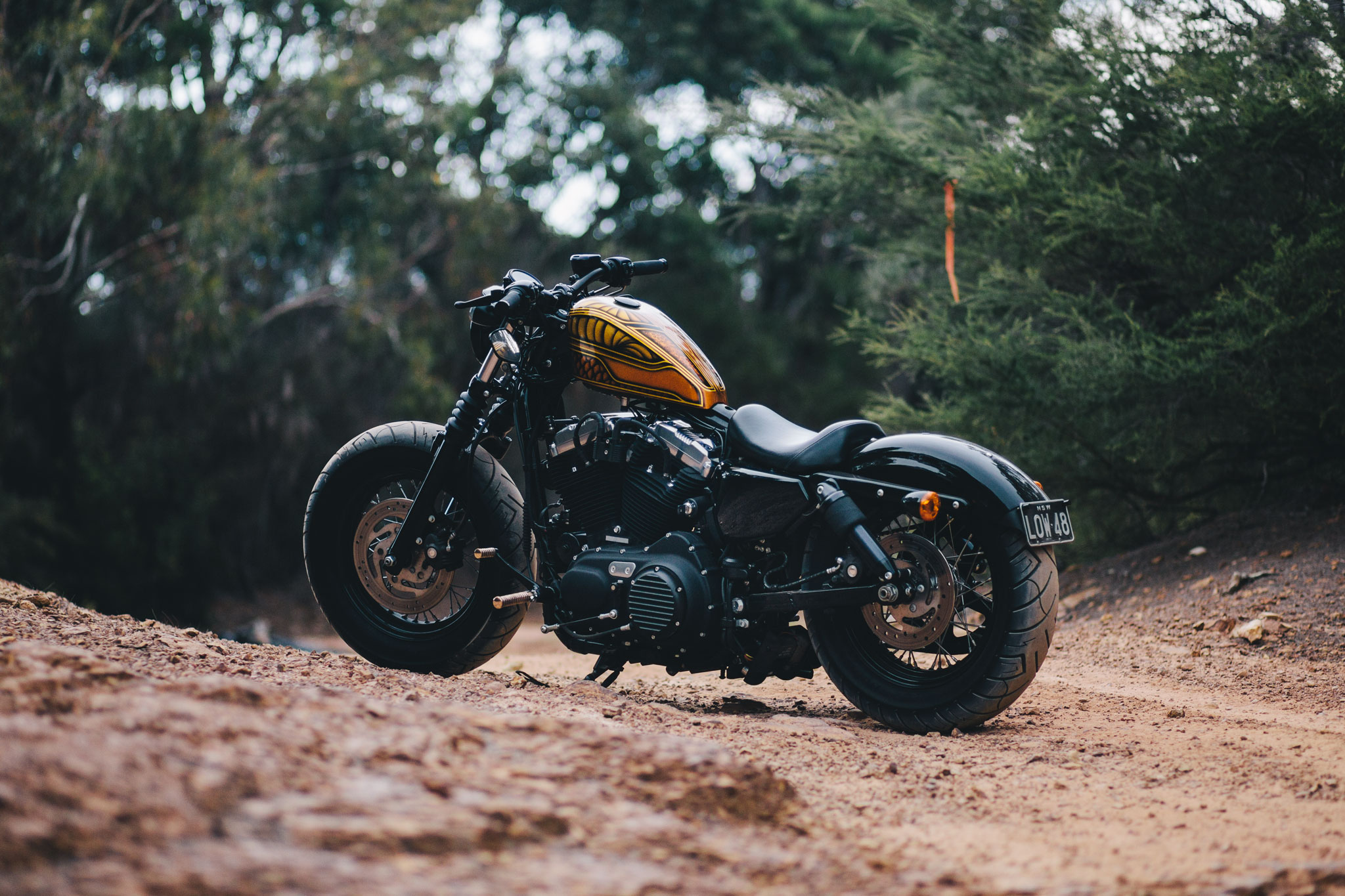 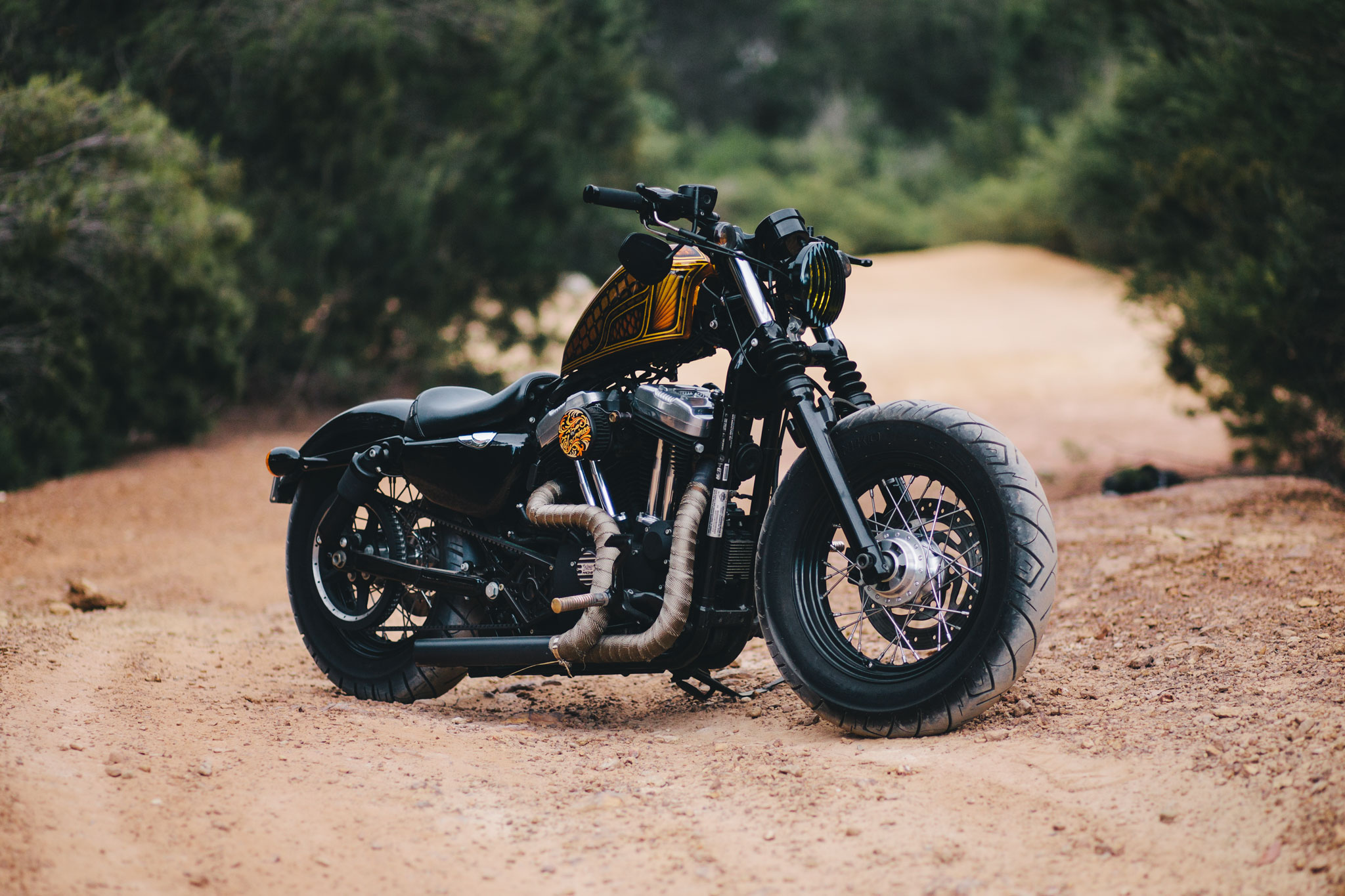 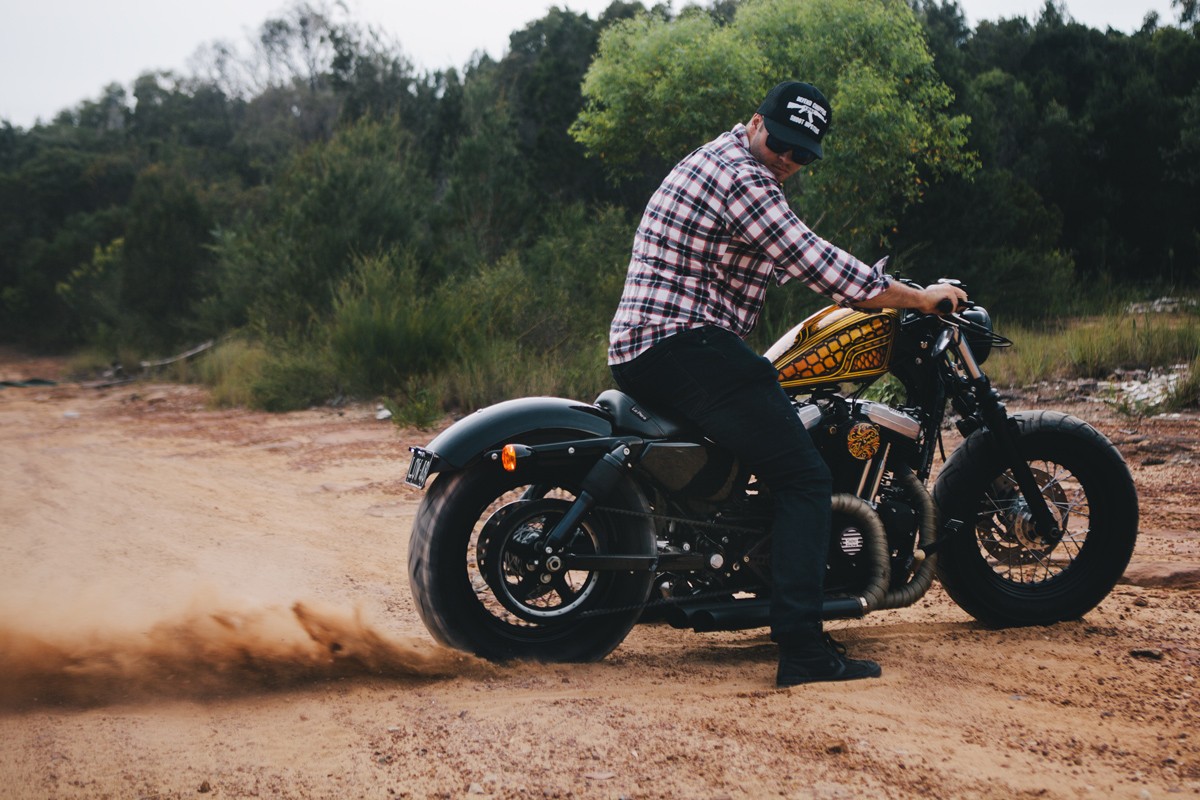