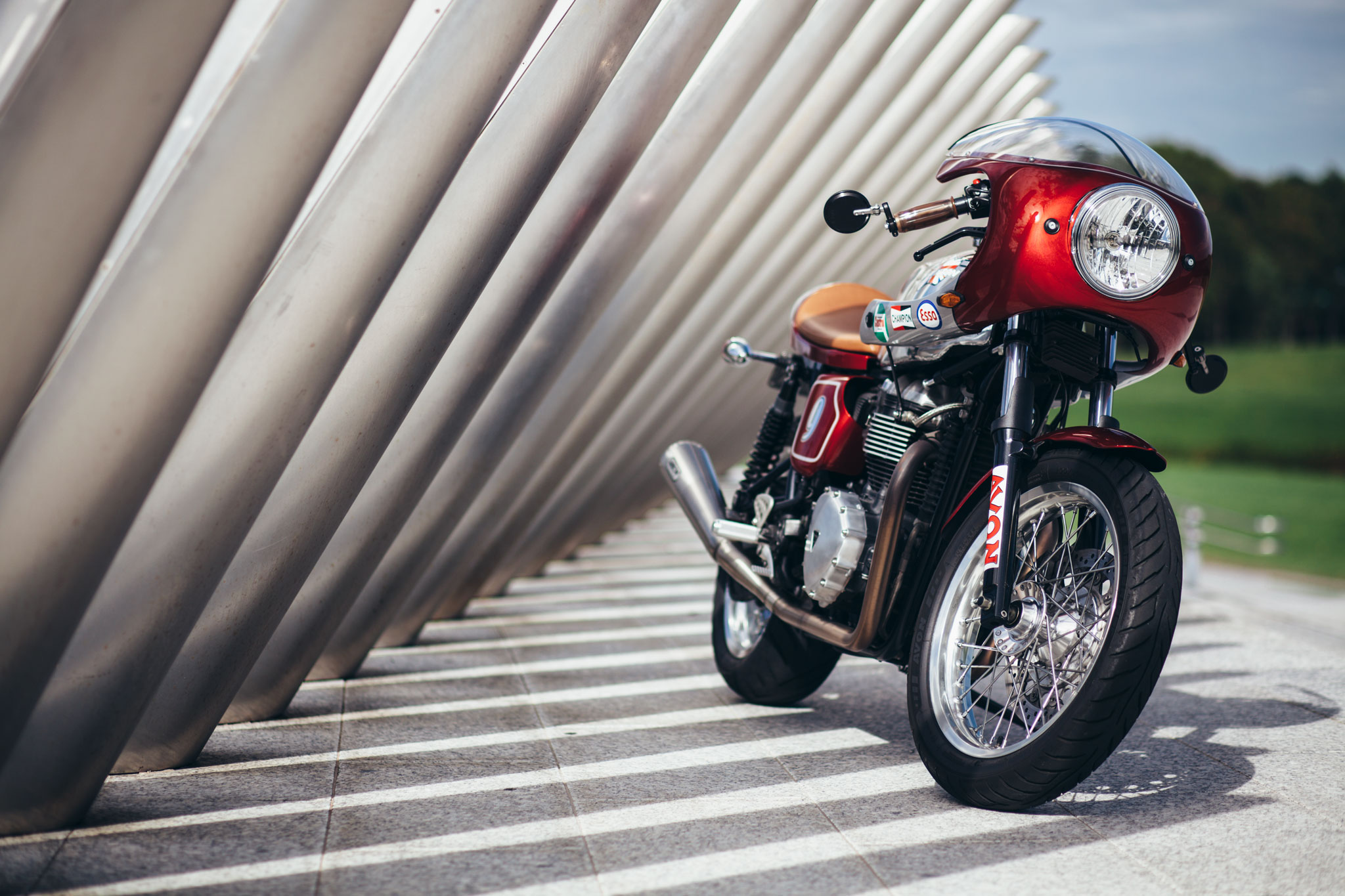 The 1960’s were a golden era for British race bikes, and Chris’ Triumph Thruxton is a sterling modern homage to these machines. What first started out as ordering a few pieces to personalise an otherwise stock bike turned into something much more, which is certainly something many can relate to. 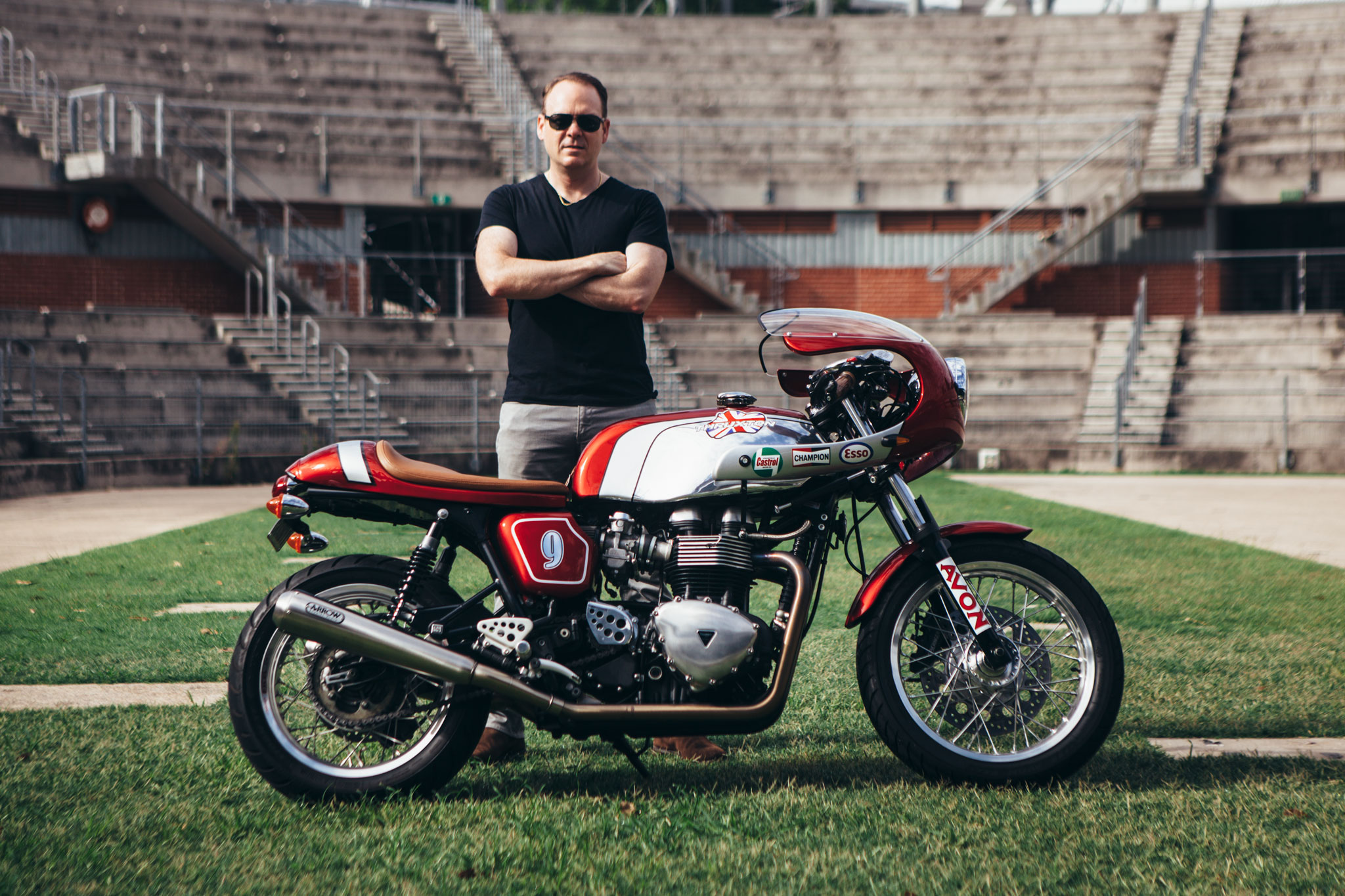 Chris picked up this 2009 Triumph Thruxton back in 2011 from the original owner; having always had a soft spot for British bikes and cars the Thruxton would be his machine of choice. It was a bike that would give him enough performance straight out of the box, with plenty of room left for modification and creative changes. “The one thing I thanked the original owner of the bike for was that he’d ticked the ‘twin arrows exhaust’ box when he ordered the bike! Apart from that it was a completely stock bike.” 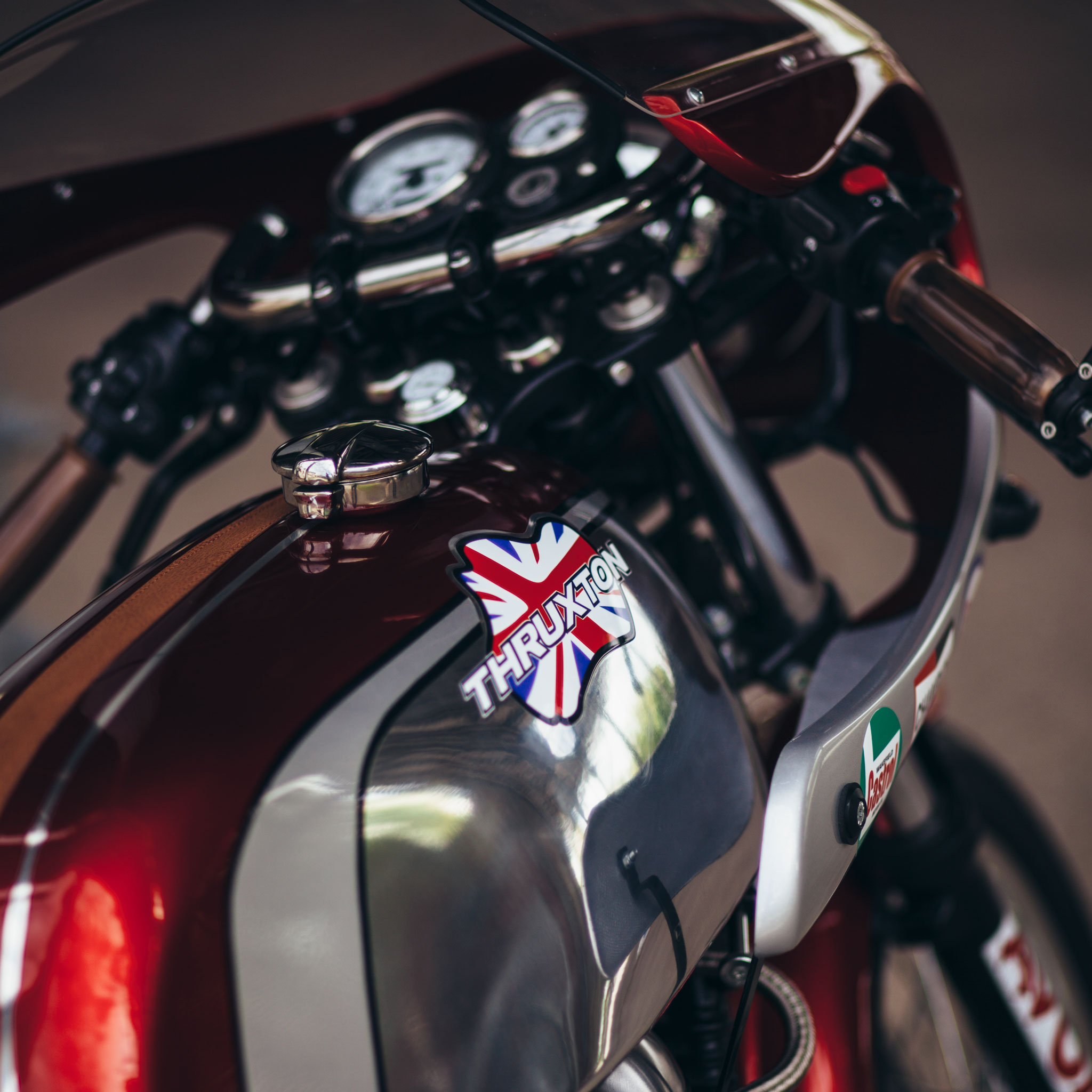 It wouldn’t take long for Chris to start ordering parts for his new bike, grabbing bits and pieces from various websites so he could add his own personal touch to the bike. It was from here that he came across the airbox removal kit, and soon his mind began to wander what else could be done to this bike? “There were a lot of guys on forums running wider rears, which I felt really improved the look of the bike so I shipped my rear wheel off to Excel to have a wider rim made with the existing hub and got to work removing that airbox.” 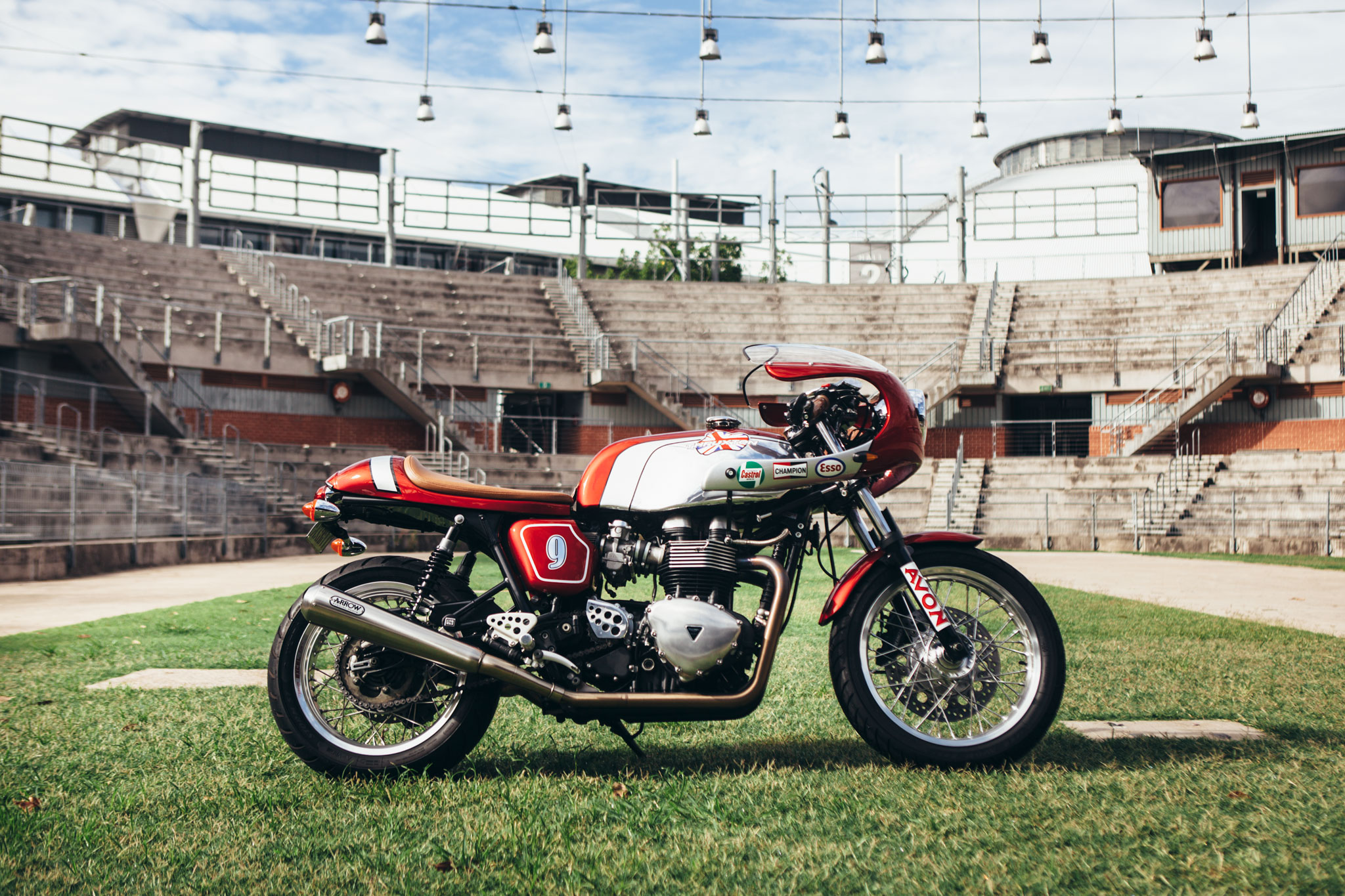 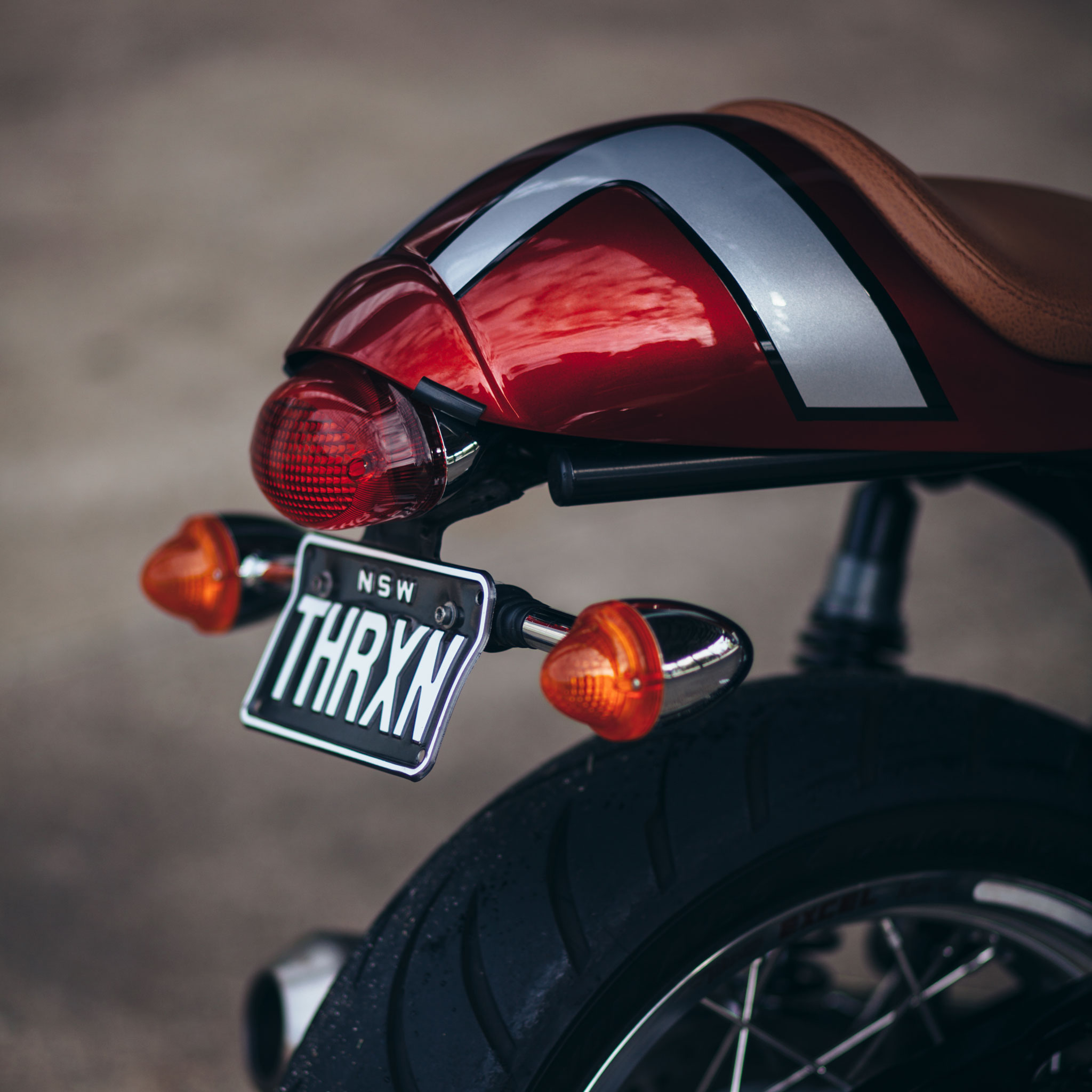 Beyond this work, Chris had yet to have any other plans for the bike. This was until a minor mishap would push the custom work on this machine even further. “I dropped the bike wheeling it around the garage, which damaged one of the exhausts, a bar end mirror and also scratched up a few other bits. I should have just replaced those parts, but for some reason I found myself on the Norman Hyde website and before I had time to think rationally I’d ordered a new tank, seat unit, bars and a race fairing which was all being shipped over from the UK!” 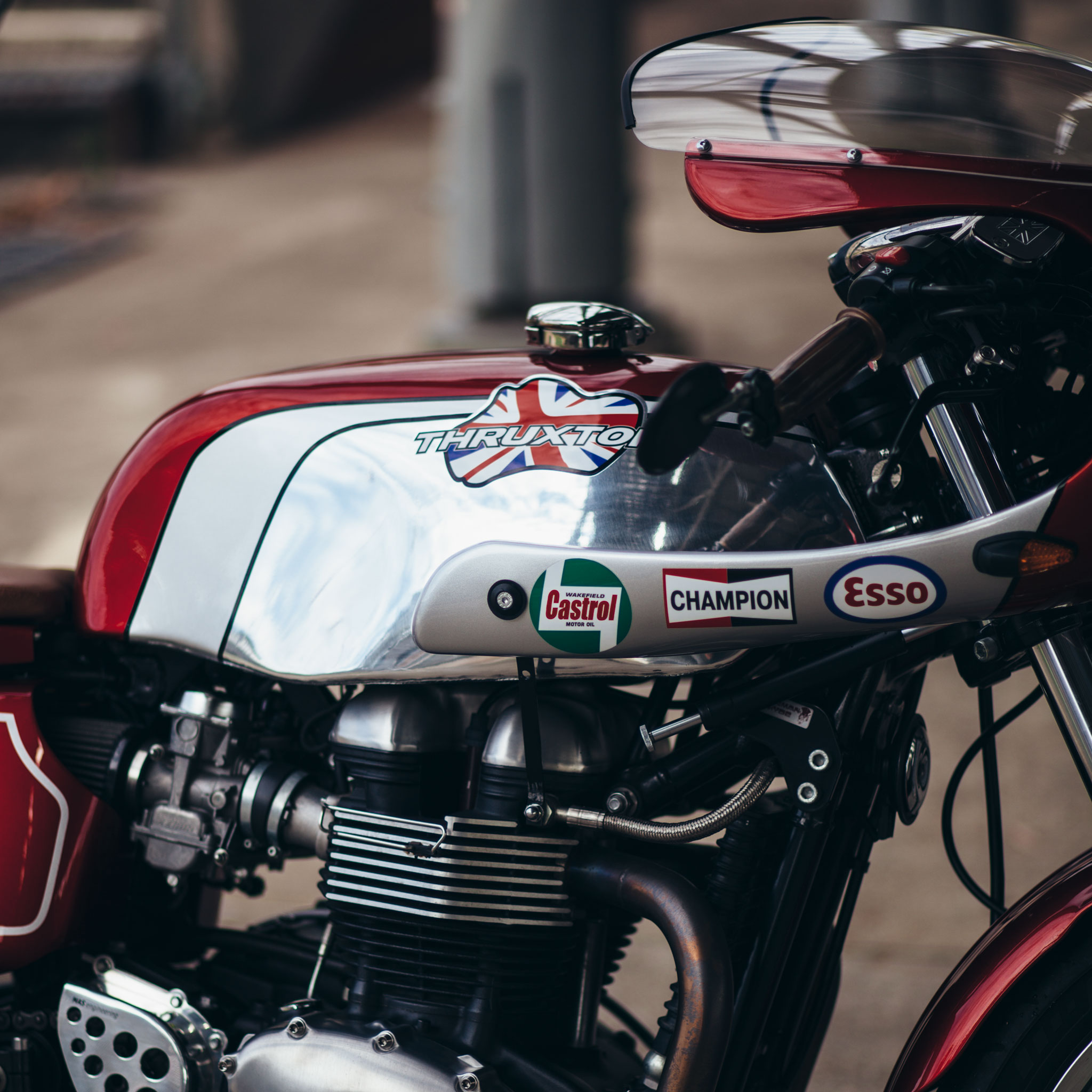 As the list of parts that Chris had bought to put onto the bike grew and grew, he soon realized this was outgrowing a bolt-on job, so he sought some help from Northside Motorcycles who had done service work on his bike before. “They were really excited by the project so I arranged for the Norman Hyde parts to be shipped directly to them so we could get started. A little into the job however I got a call from them telling me I’d bought the wrong tank! The one I’d purchased was for the carbi model whereas my bike was EFI. Shit! Shipping it back was going to cost me a bomb, though this wouldn’t matter as Norman Hyde didn’t make a tank for the EFI model anyway!” 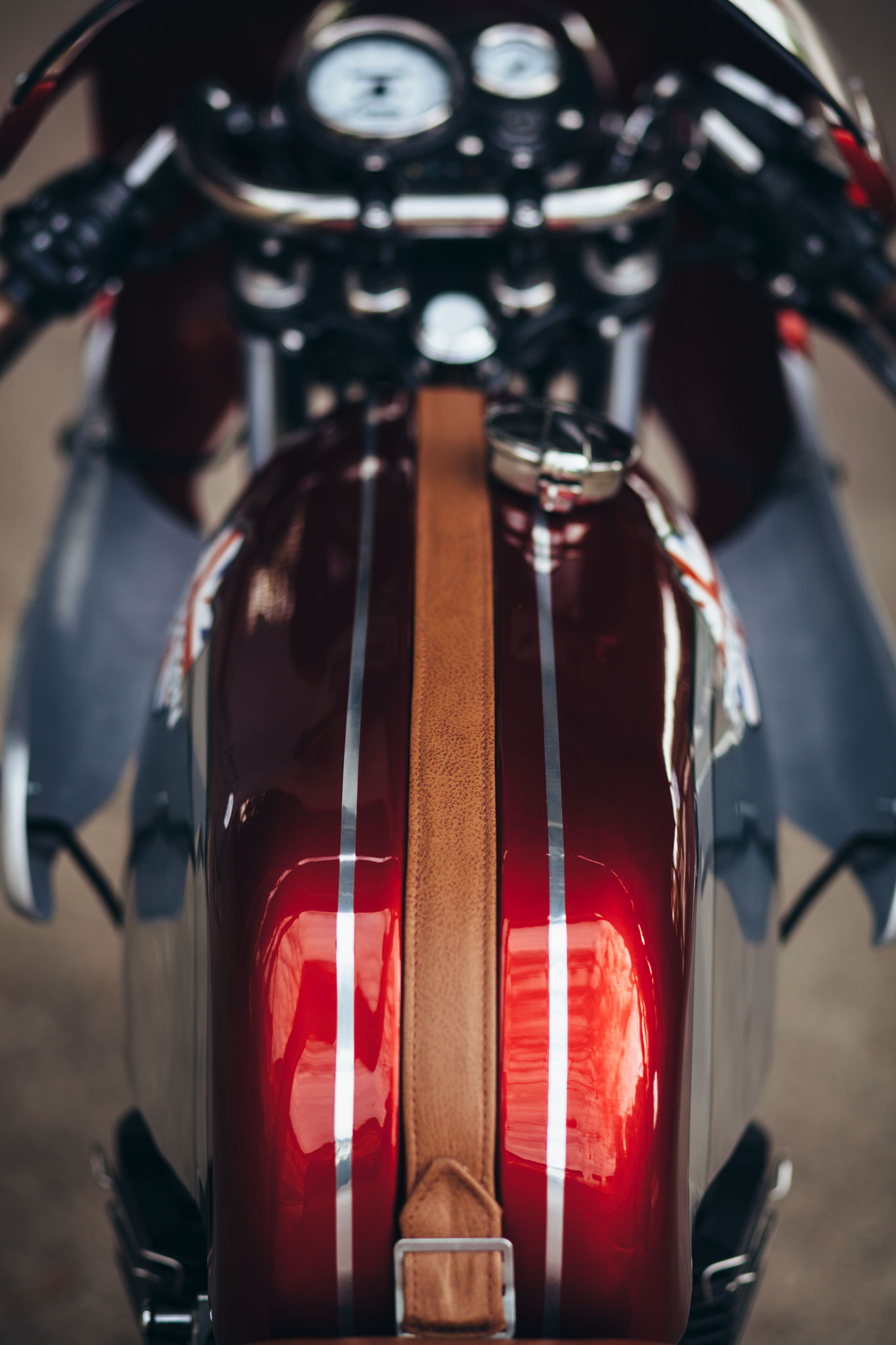 With this dilemma looming over the bikes head Chris looked for an alternative tank for the bike, but came up dry. “I searched for a similar tank but the Norman Hyde one was very long, it was designed to push the seat unit further back and I just couldn’t find anything that would fit easily. So I was left with the option of finding a fabricator who was prepared to modify the base of the tank and then transfer my fuel pump from the stock tank to the Hyde. Fortunately someone referred me to Ben at Extreme Creations in Brookvale who was prepared to take it on and he did a brilliant job!” 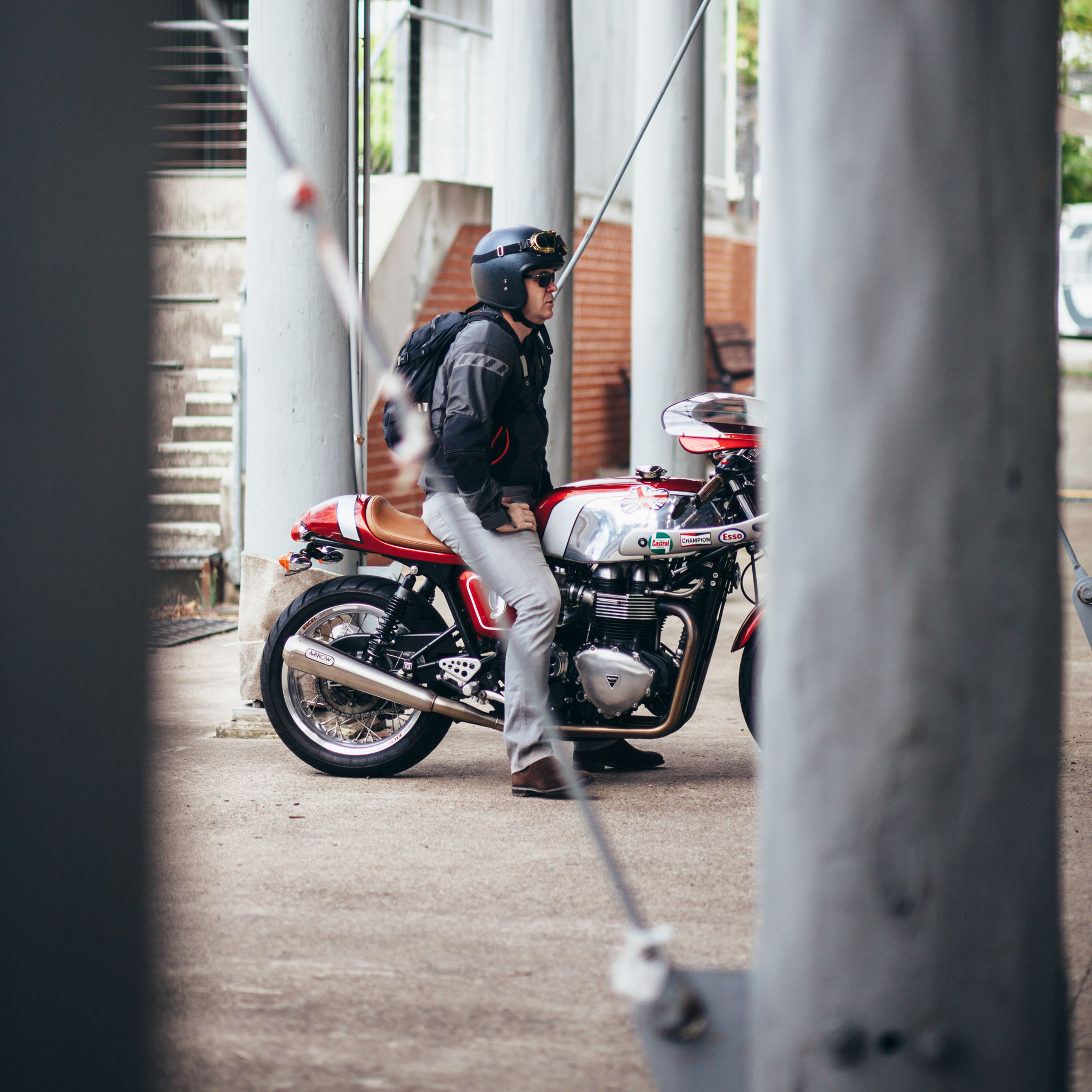 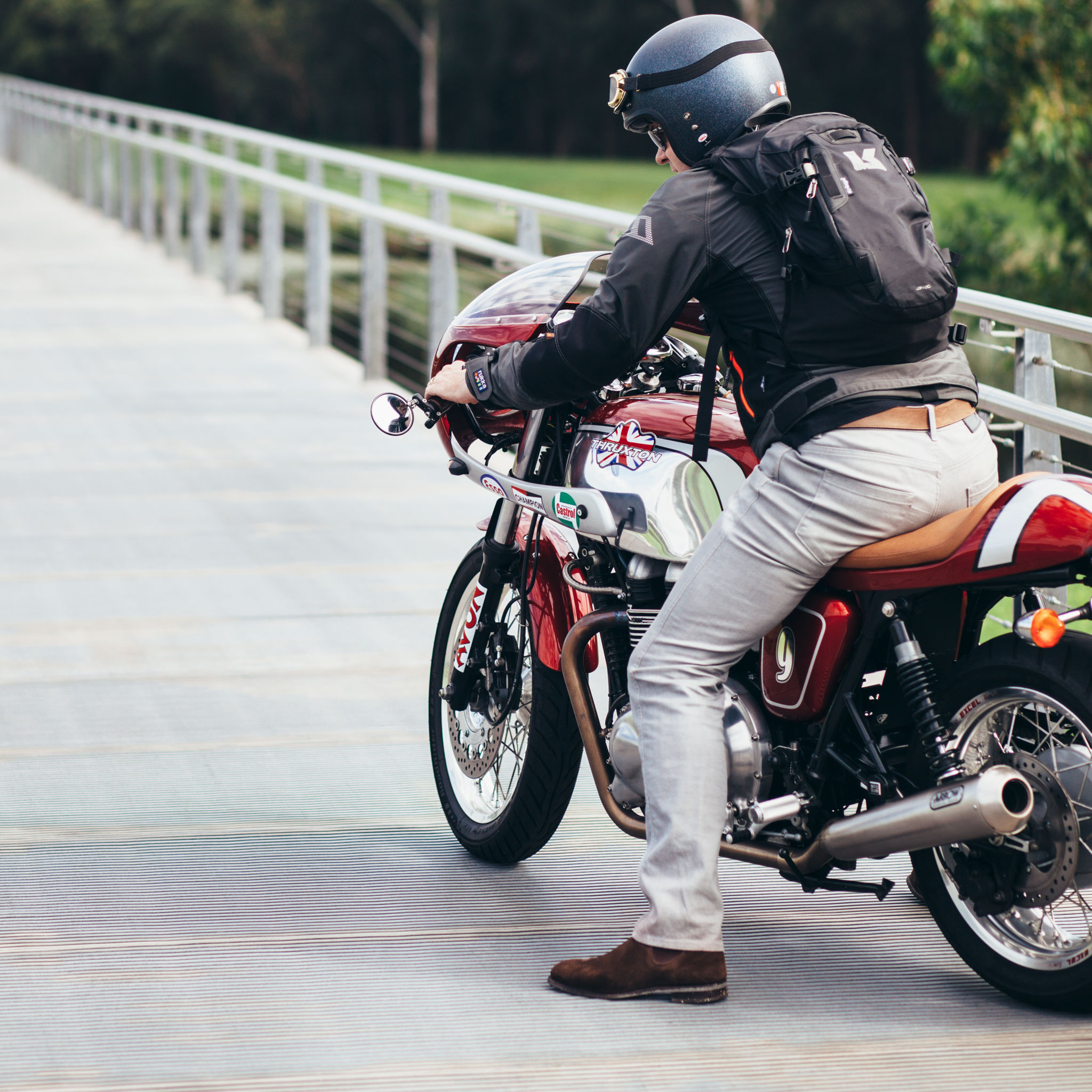 Now the bike was taking shape, as all the parts had been sourced and the trial fit was a success. It would now be time to come up with a colour scheme. Collide A Scope over at Asquith provided the answer. Lawrence spent many hours with Chris discussing concepts before landing on the final scheme. “I liked the polish on the Hyde tank, but felt it was too much so we left it part painted, part plain. The final touch on the paintjob was the custom graphic. I wanted some link to the Thruxton’s UK heritage so we came up with the idea of combining the name with an outline of the actual Thruxton racetrack and a Union Jack to finish it off.” 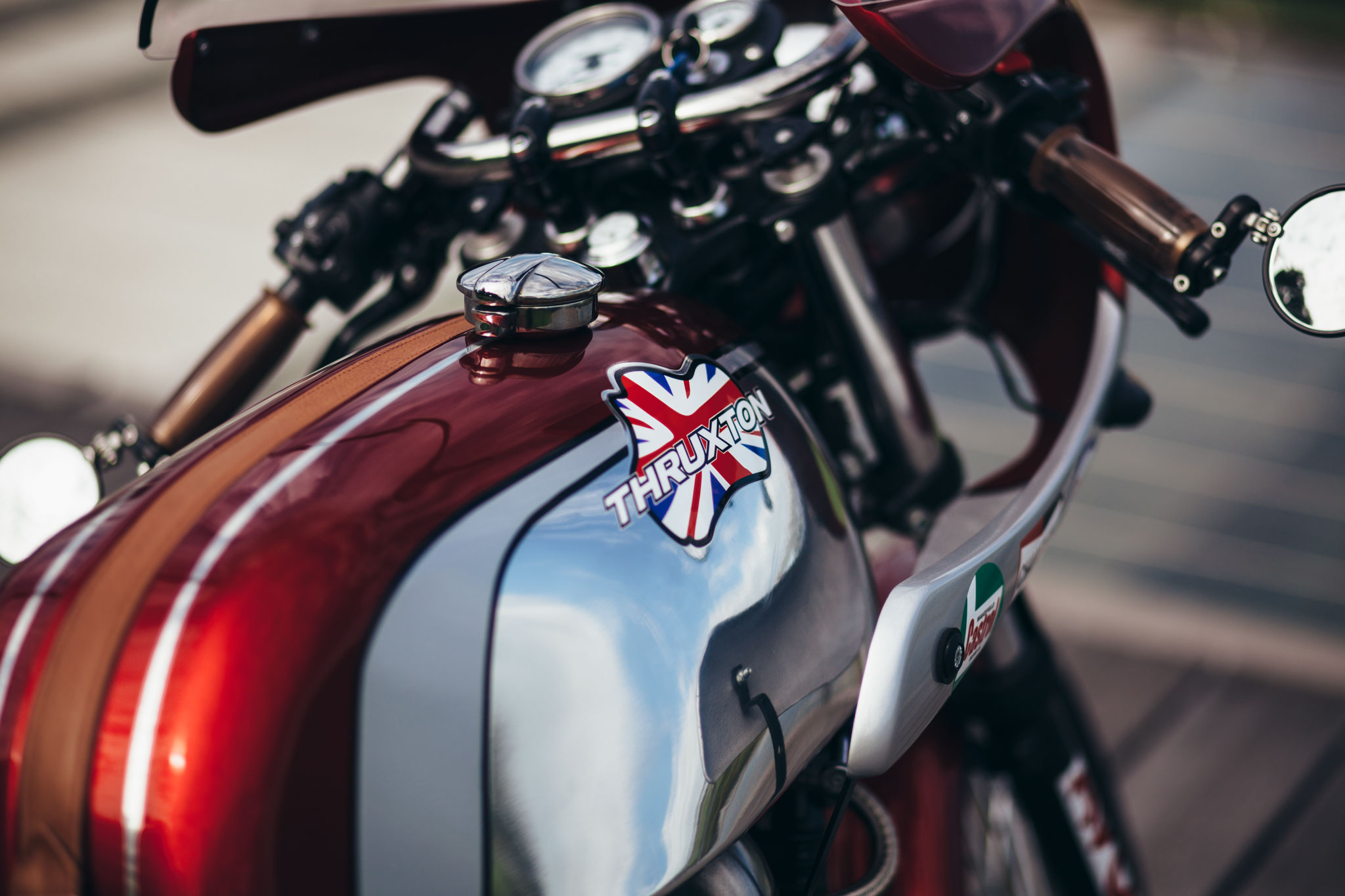 After a 7 month build process the bike was ready for riding, and Chris was in love… but there was still one thing to be changed. “There was one thing that really bugged me. The Norman Hyde seat came with only a basic black vinyl cover and the tank had a plain black rubber strap. I felt the bike deserved something much better to finish it off so I found a real craftsman upholsterer, CCU at Moorebank and sure enough they got to work.

I couldn’t be happier with the final result. It rides brilliantly, sounds great and looks the business. It always draws a crowd when I pull up somewhere!” 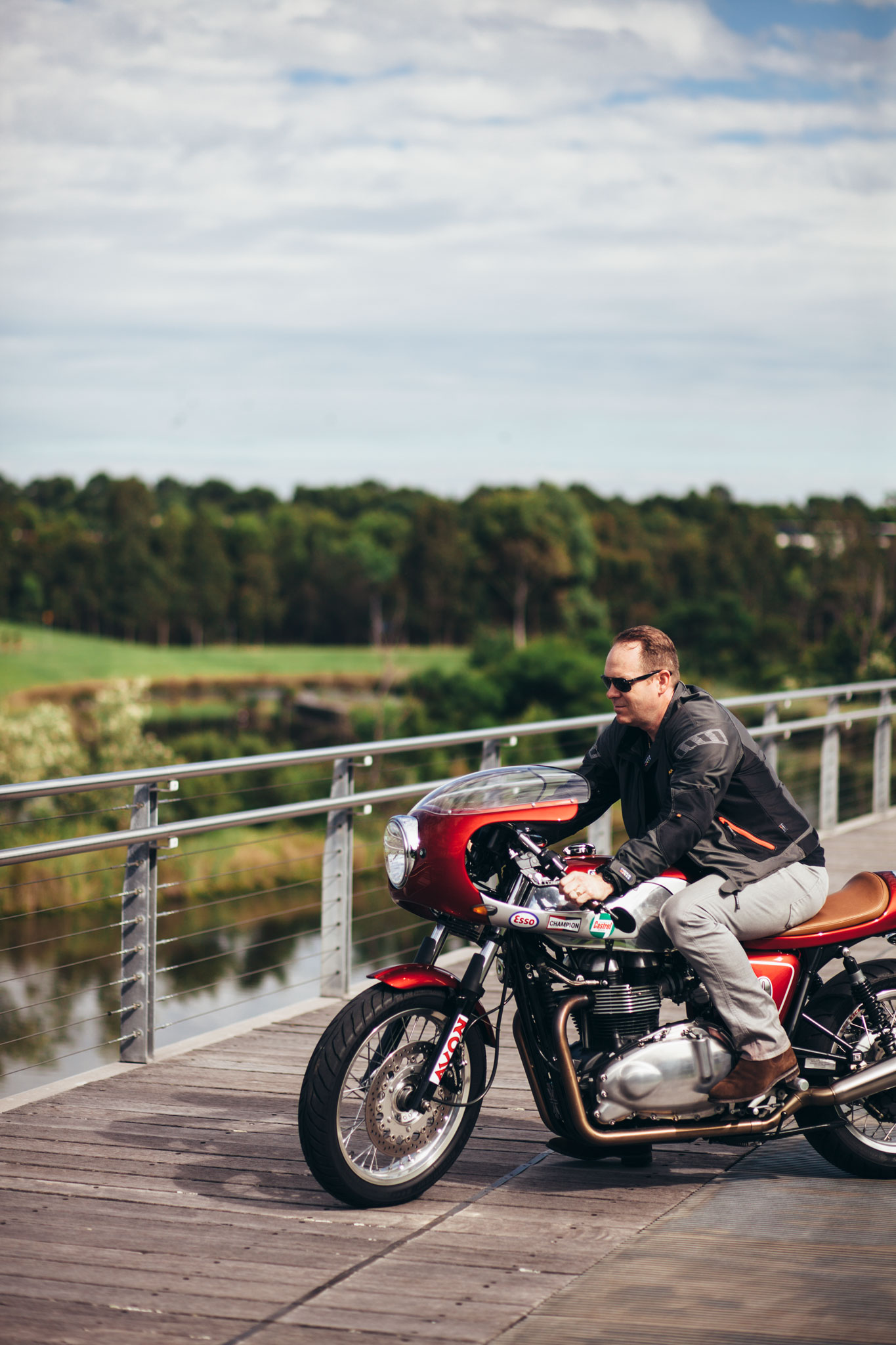 After starting another project, Chris’ Triumph Thruxton is up for sale. – http://www.bikesales.com.au/private/SSE-AD-3793500/2009-Triumph-Thruxton 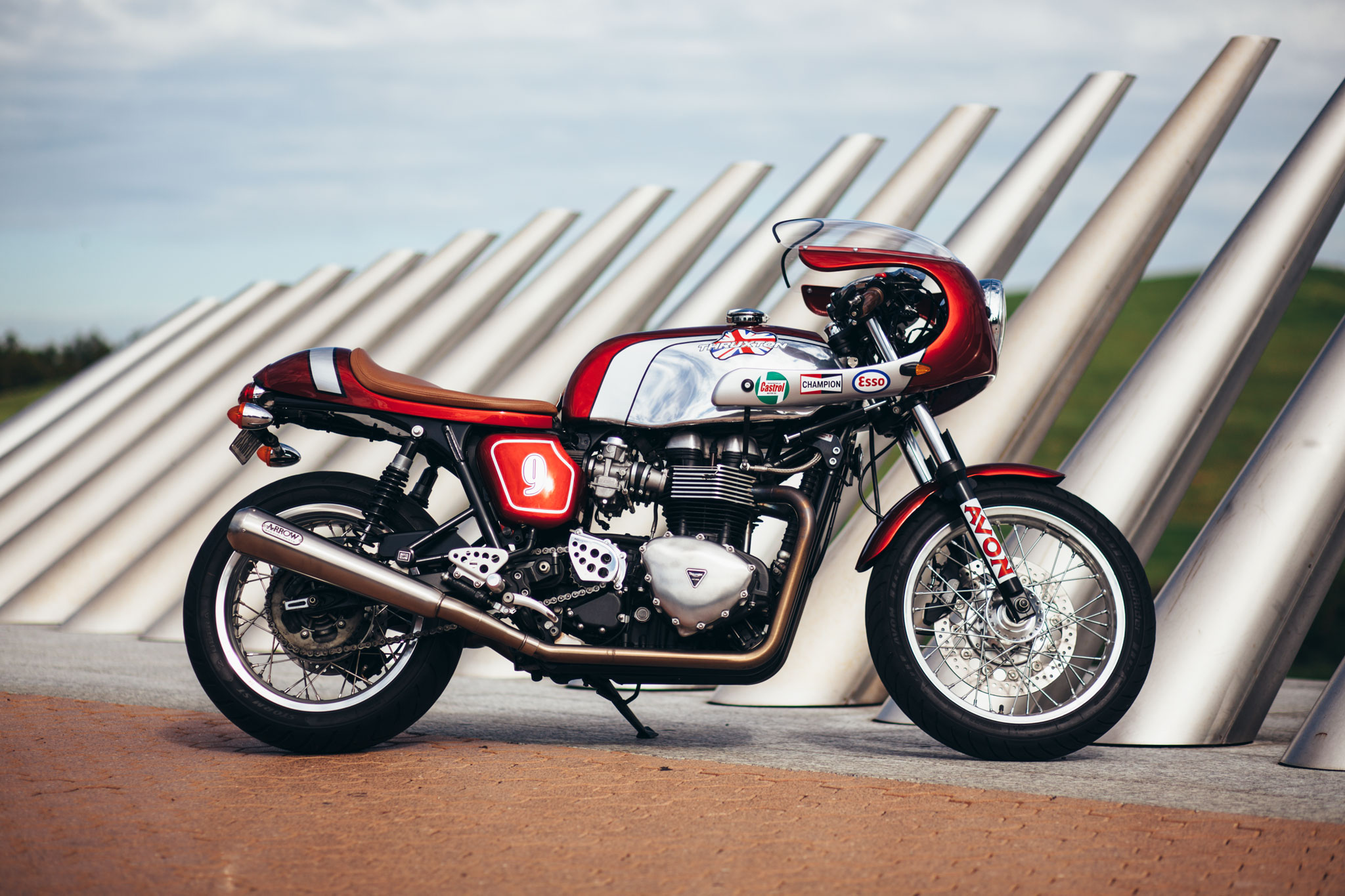 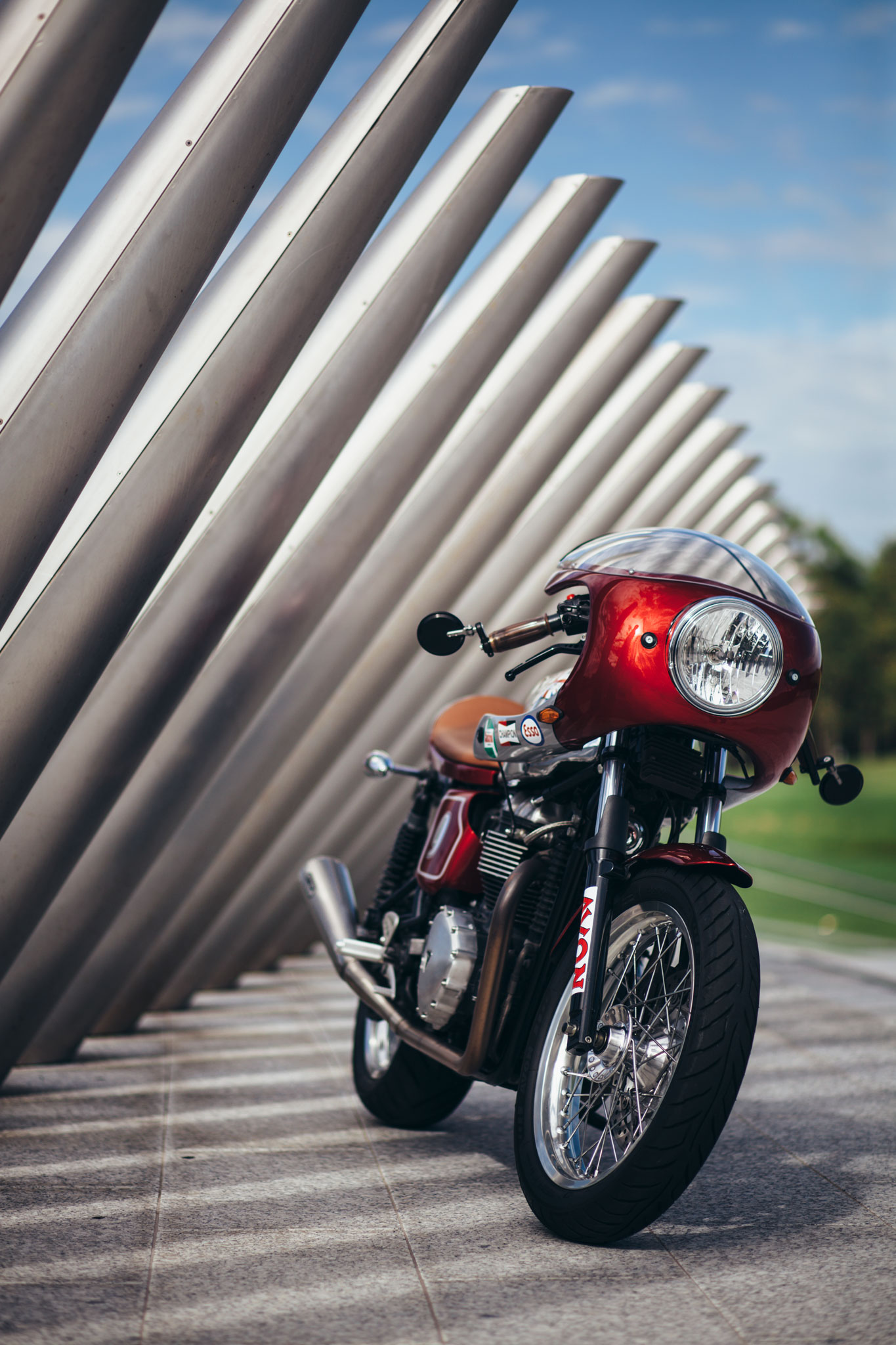 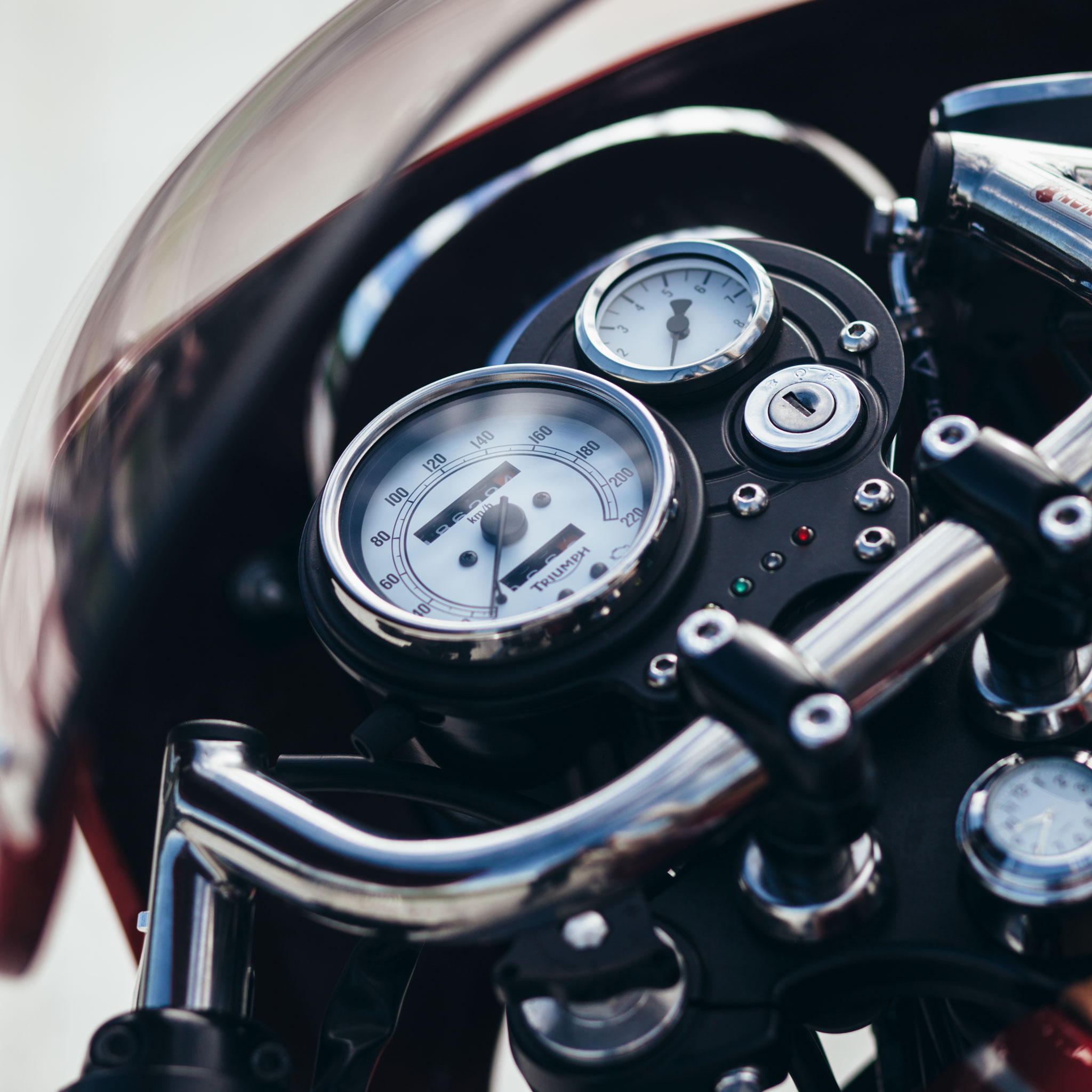