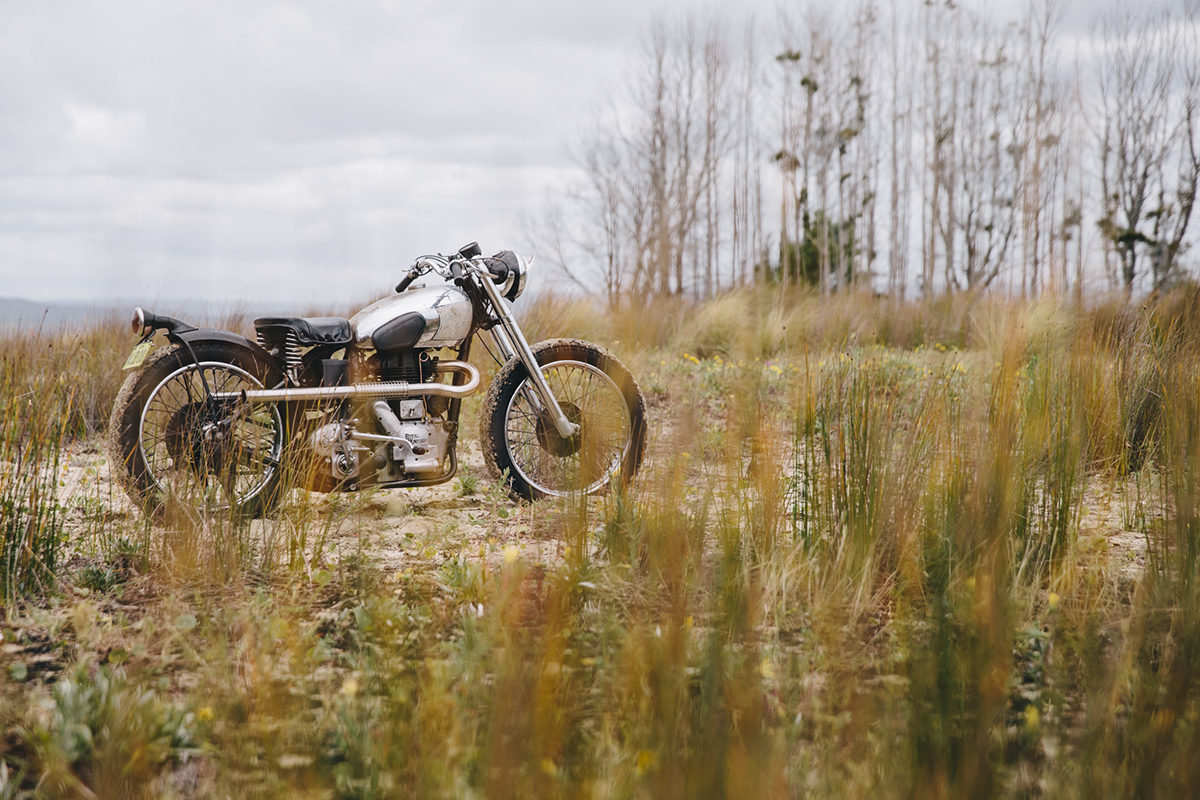 It was in Post-War England that the Royal Enfield J2 500 first began to hit the streets. A rigid frame with telescopic forks and a 500cc engine, the J2 was to be the flashier version of its previous model. For this model, the 500cc single cylinder head would be boasting a fancy twin exhaust pipe system running out of either side of the bike. Rumour has it this gave the bike a whopping extra 2hp – however with period racers often opting for the single port model this may well be chalked up to marking charlatans. 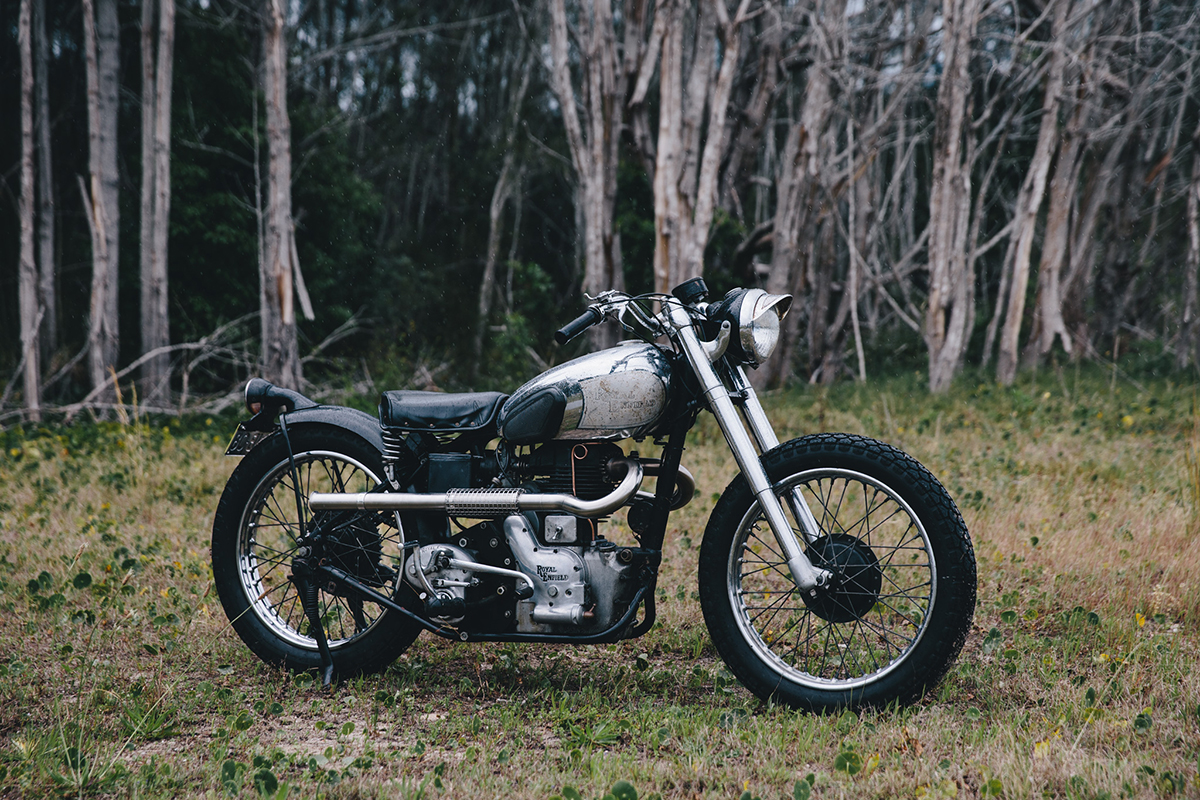 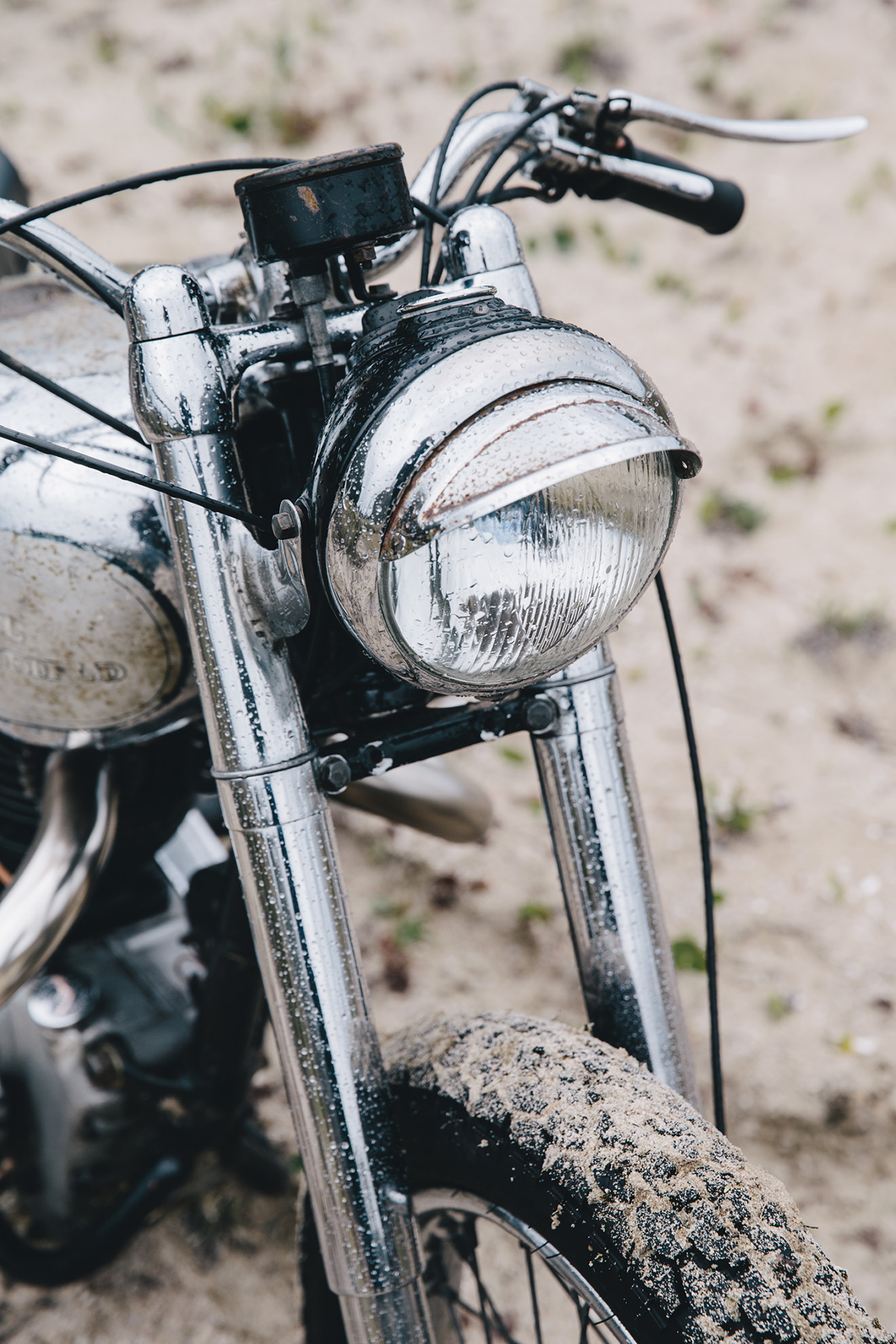 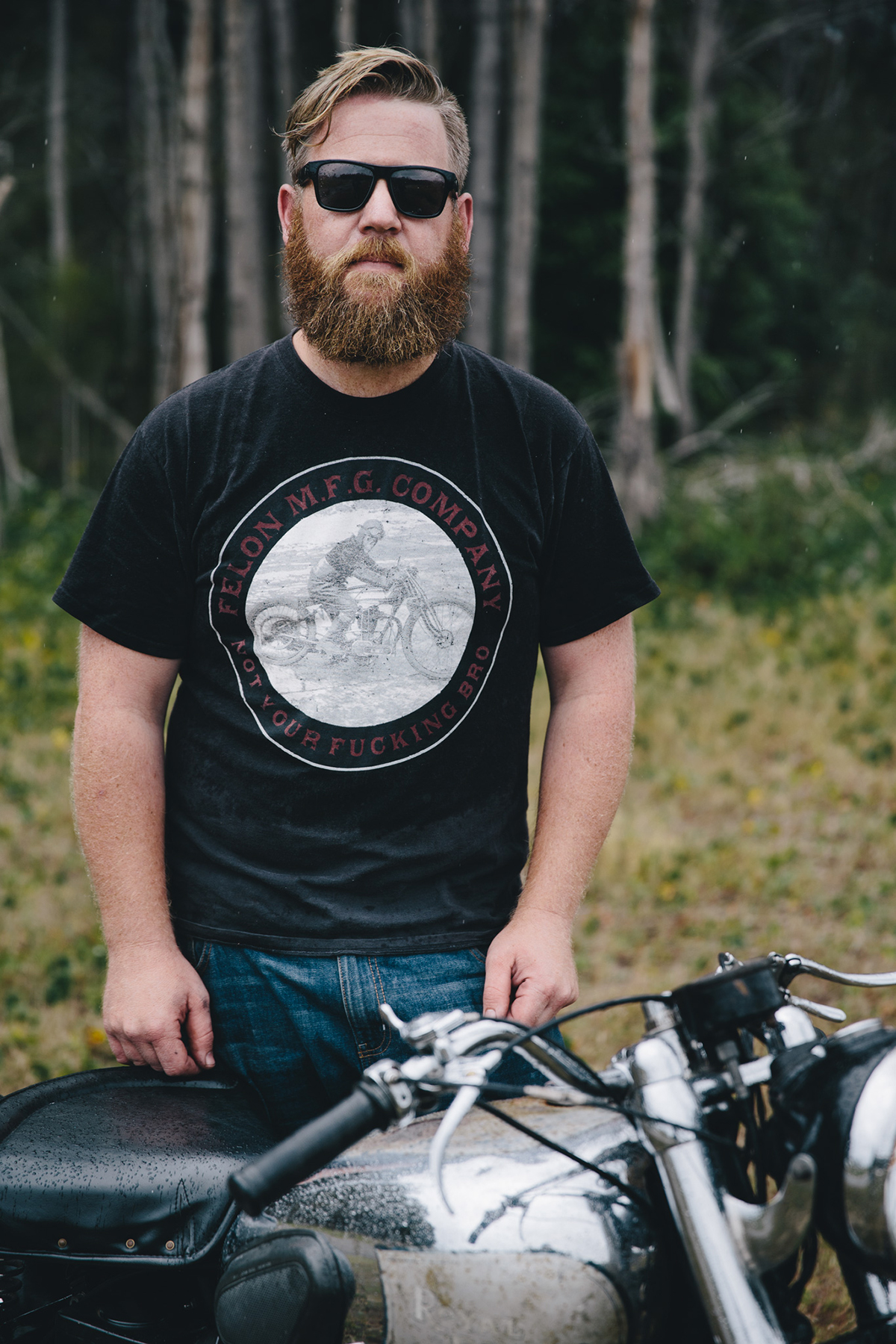 A far stretch from it’s original home in England, this 68-year-old machine somehow found it’s way to Australia – something many Pommie ex-pats seem to find themselves doing. This is where Clint would appear in this bike’s already colourful history, although now the bike would receive a whole new lease on life and be reborn into a new age of chopping and wrenching. Having restored an old BSA D7 Bantam, Clint decided he’d had enough of the seemingly relentless unreliability he was experiencing (paired with the joys of 7hp) and chucked the bike up for sale online. Not too long later, he was contacted by a bloke wanting to strike a deal to swap his Royal Enfield J2 for the Bantam that was also sporting a sidecar, the true prize this trader was after. “I figured why not, he could take the Bantam off my hands and salvage it’s sidecar while I’d have some new wheels to play with and customise to my liking.” 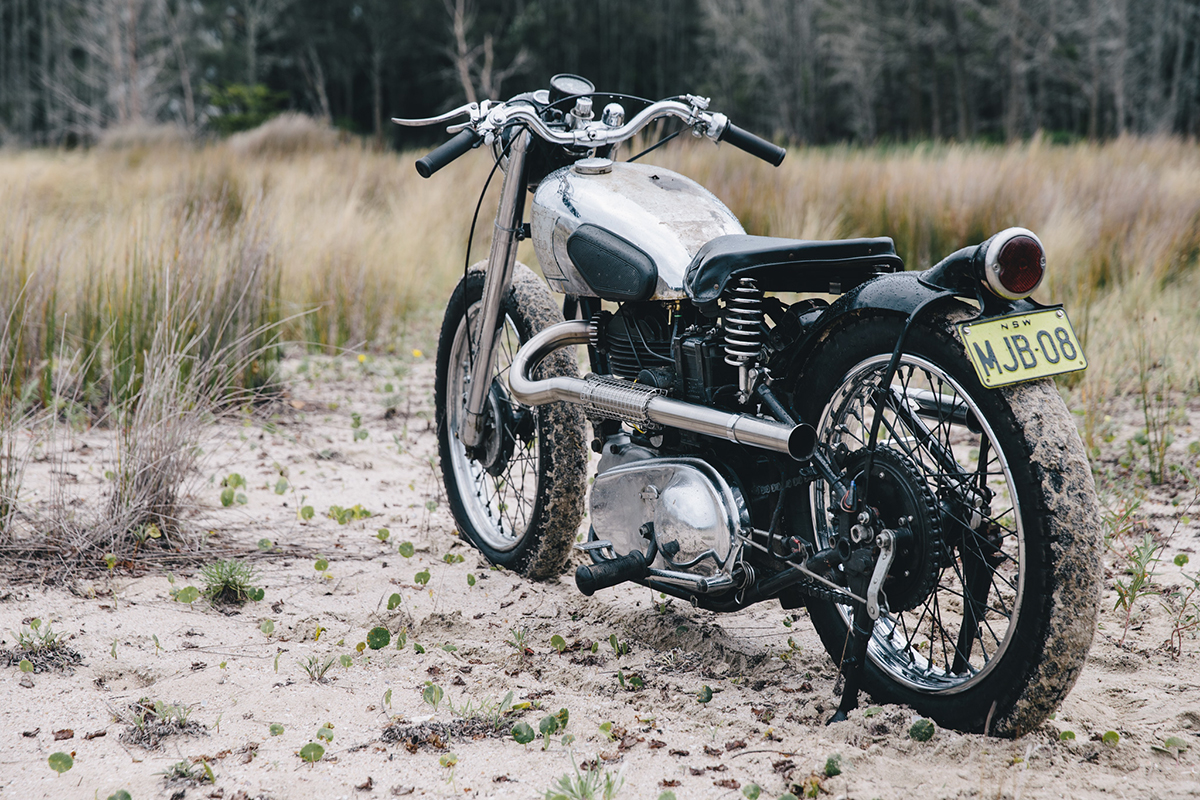 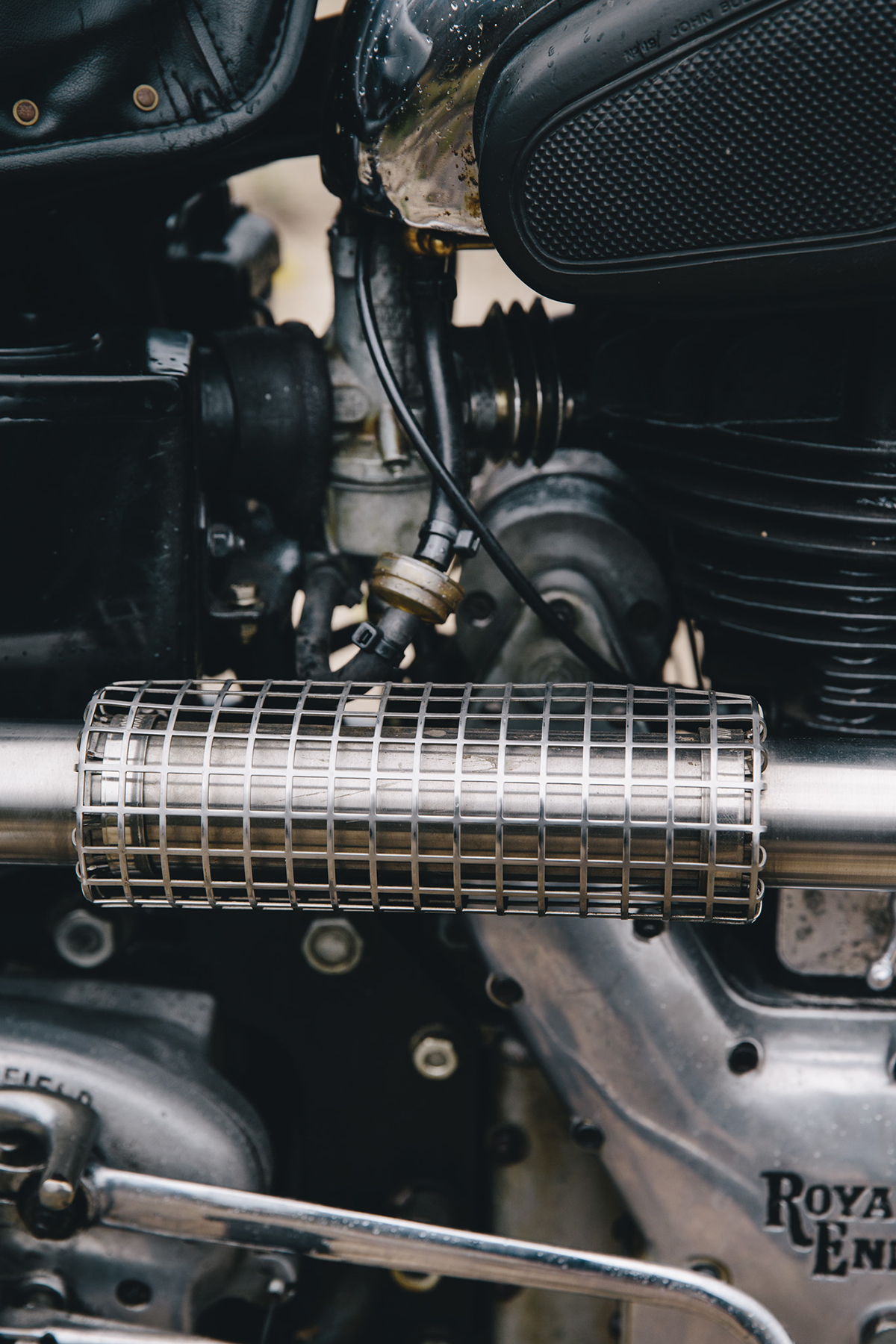 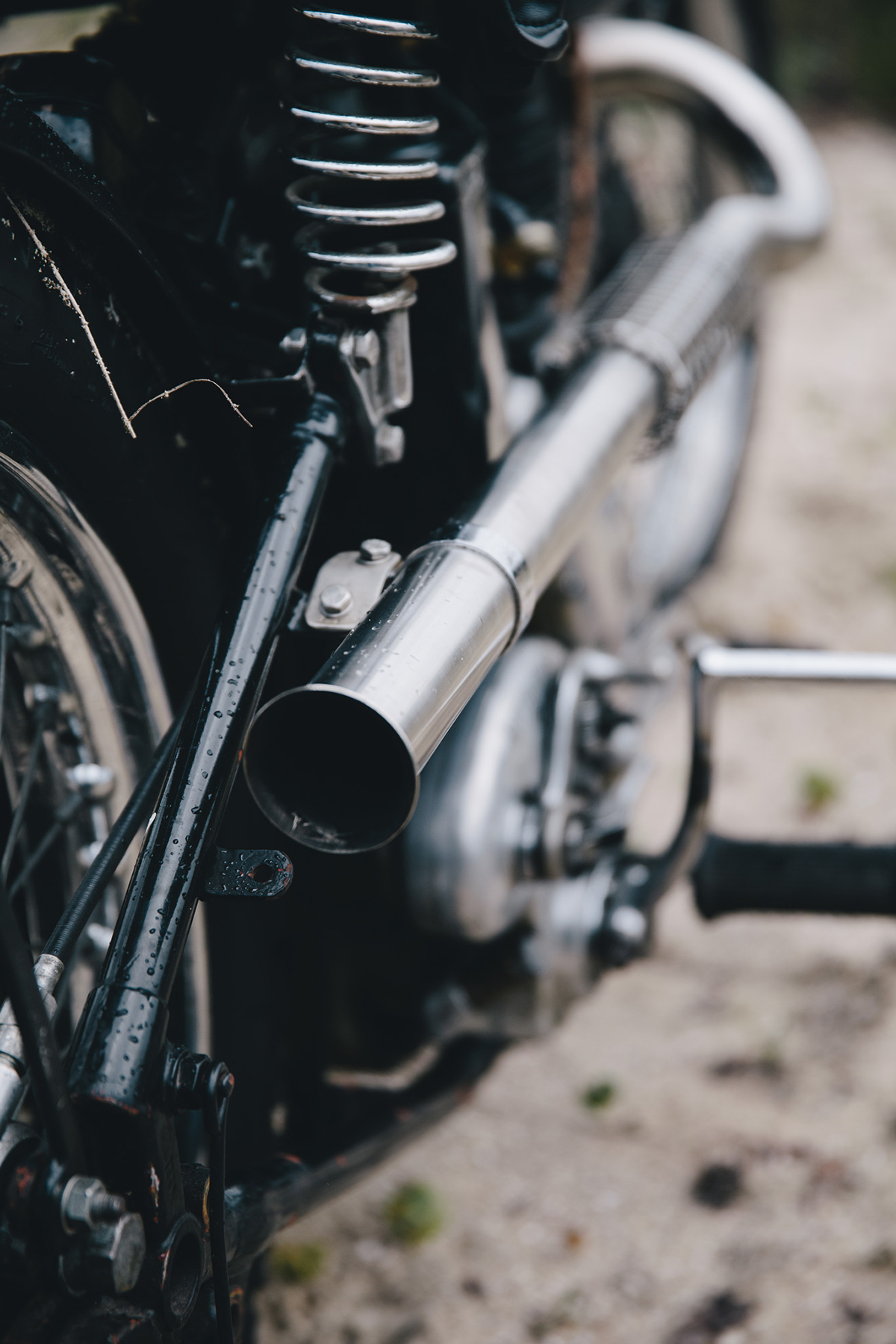 After a trip up north in his Ute to grab the new machine, the bike was now in it’s new home by the coast to begin a new chapter on the road – albeit with more work than previously anticipated. “The bike had an amateur restoration from the previous owner, and the cracks started to show soon after arriving in my garage (literally- the bog was an inch deep on the tank!). It had a full chrome front end that was done some time ago, they are usually painted from factory. The bike was an absolute pig to start, the clutch was slipping badly and when it did fire usually it tried to launch me over the handlebars. 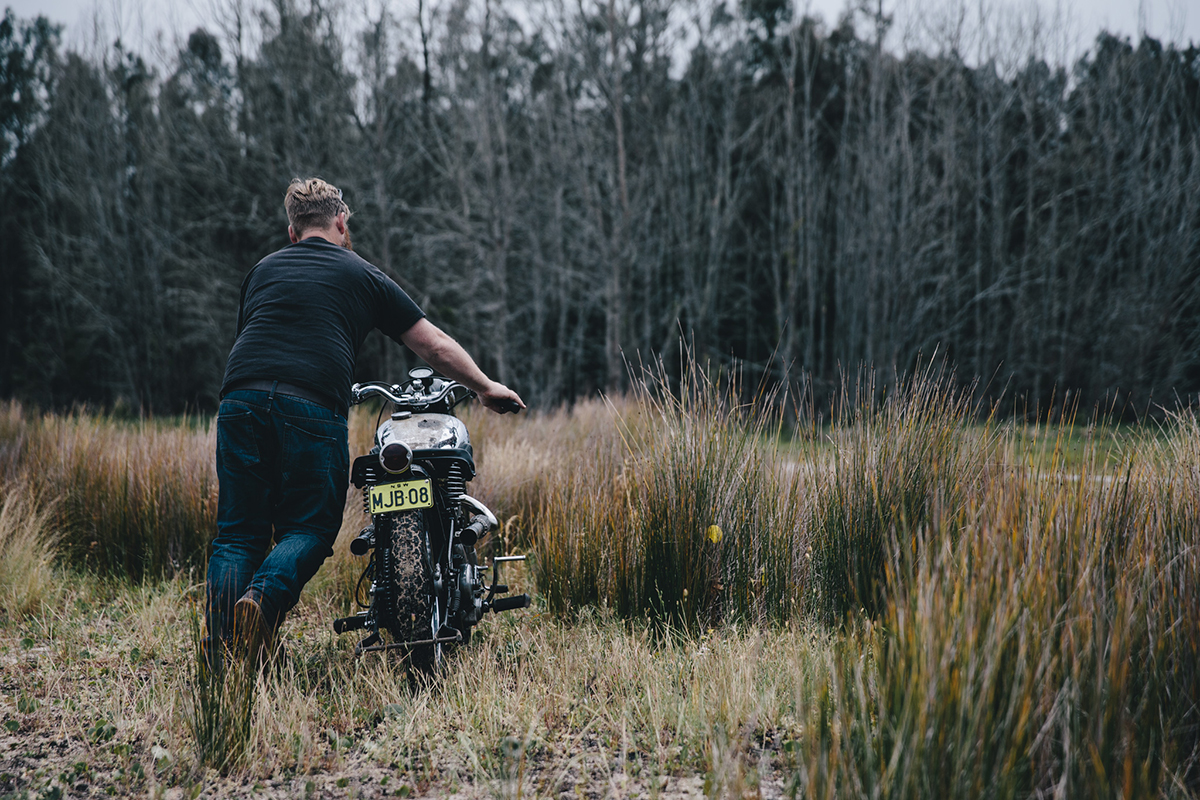 Despite the bike’s stubborn persona, this would be the machine for Clint’s creation. The initial plan was to just tidy the bike up, keeping all of the original patina and wear intact while having a machine that still ran well. “I wanted it to look like a bike that was ridden hard in the ‘40’s, and then was stashed away for 70 years. This meant period correct style across the board, high pipes, vintage style tyres, bobbed fender and original type paint, cloth-covered wires etc. The bike was nearly there, but the process was not as easy as I had thought it would be. I didn’t want a restored bike – but I also didn’t want to break down every trip either (the bantam had scarred me for life).” 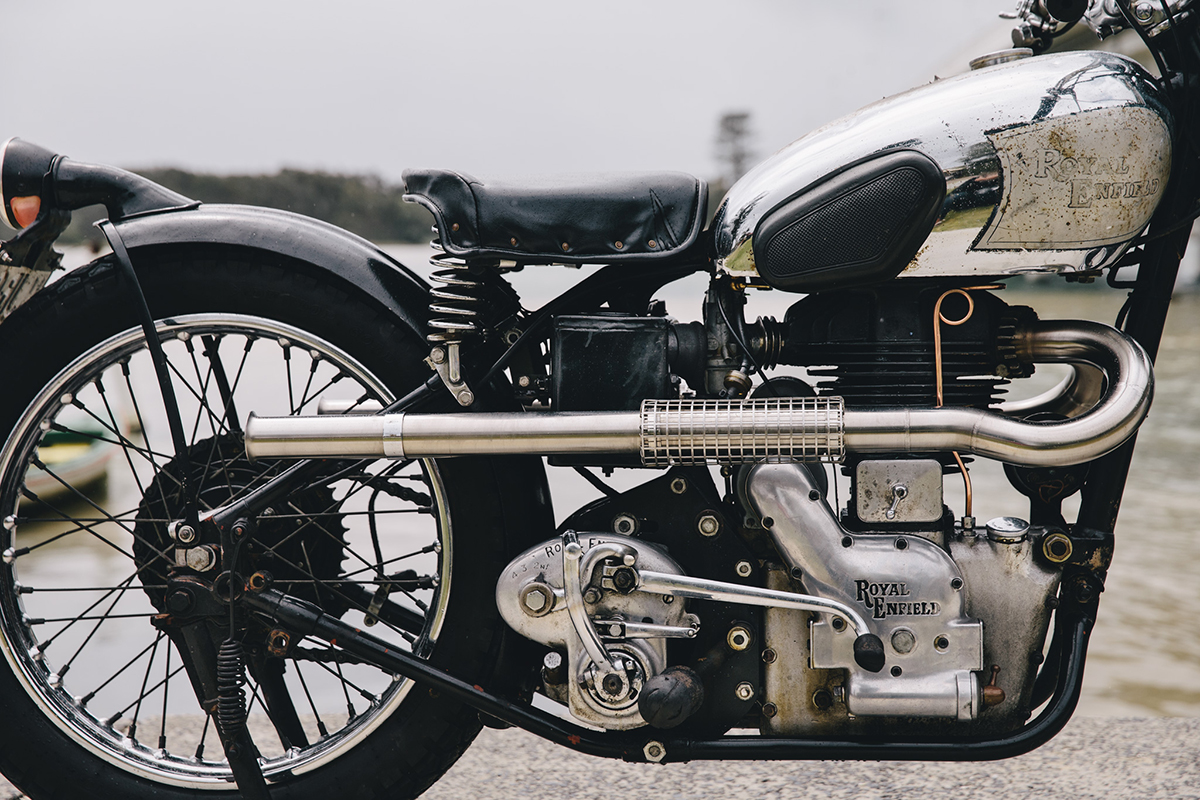 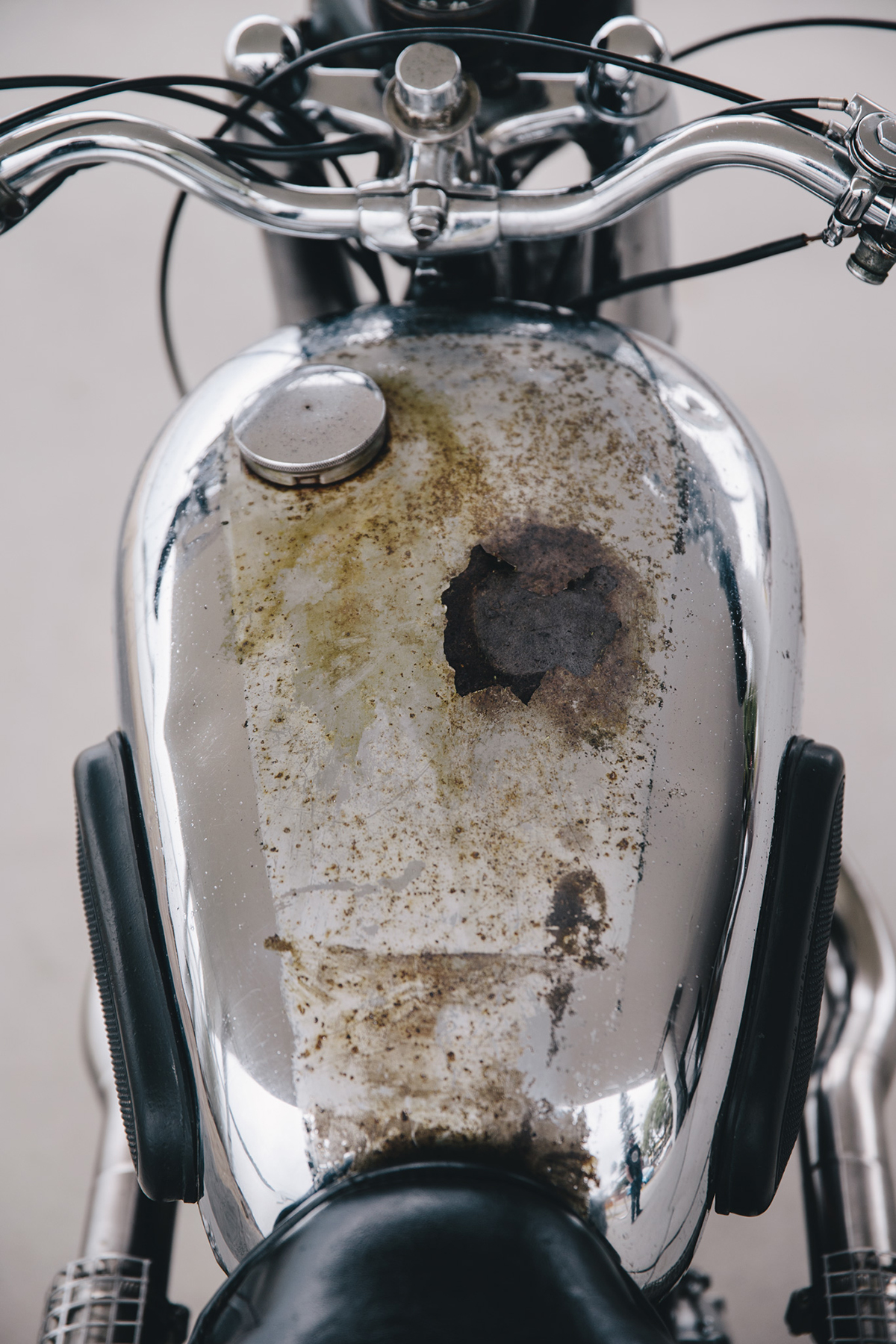 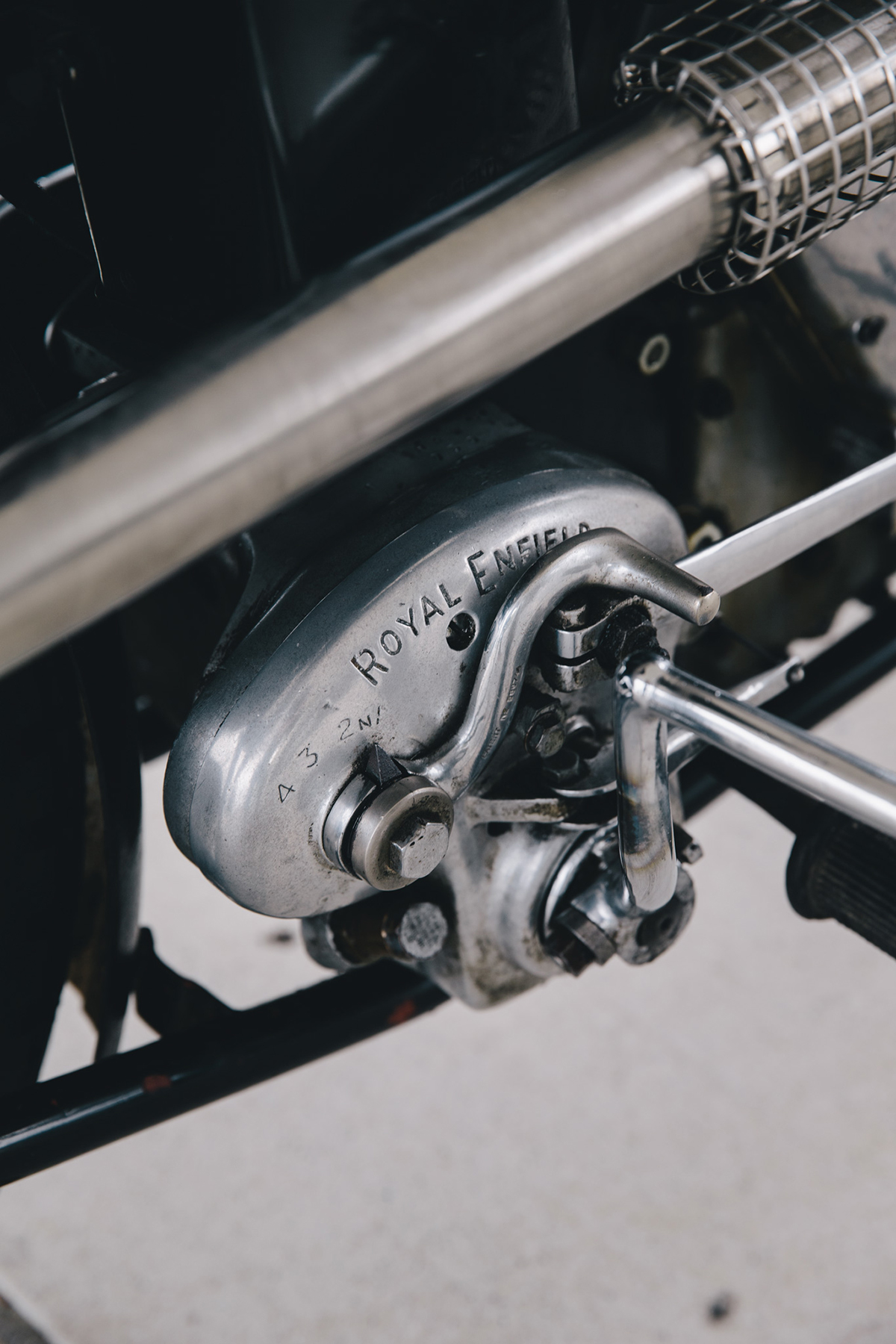 The bike was nearing its destination in regards to Clint’s idea, but with all the unexpected hurdles that came up throughout the process the enthusiasm and drive began to wane. “About 80% through I had lost interest. There were so many hurdles, and so much skulduggery that kept being uncovered that the bike was left in the corner for a few years, awaiting motivation.” And motivation would strike – in the form of tweed and groomed moustaches. After seeing coverage of the 2014 Distinguished Gentleman’s Ride, Clint now had his motivation to complete the build 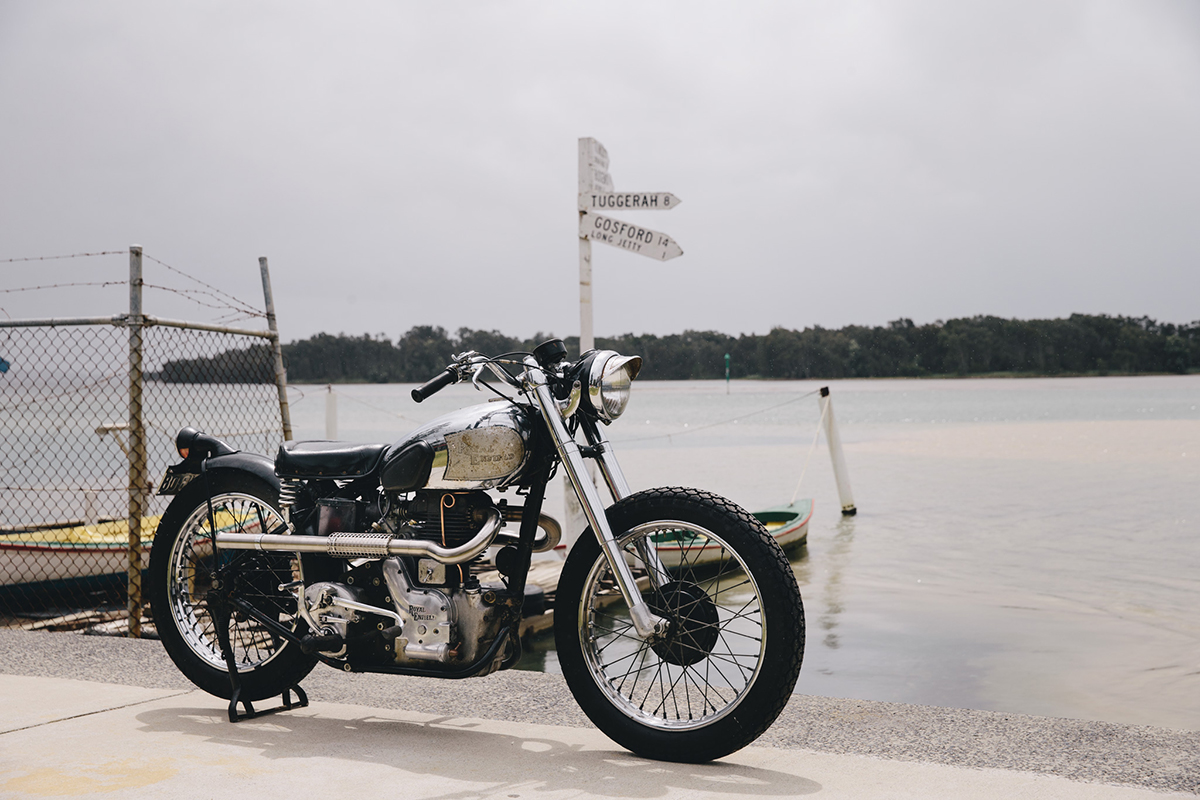 “I was gunning for the 2015 DGR event but fell short by a week or so due to some gremlins in the bike. We did however make the 2016 DGR Sydney event and we had an amazing time. I sourced an original rear guard with a pussy pad that was fitted for my wife Kristy to sit on, A great feat for someone who has never been on the back of a bike before!” 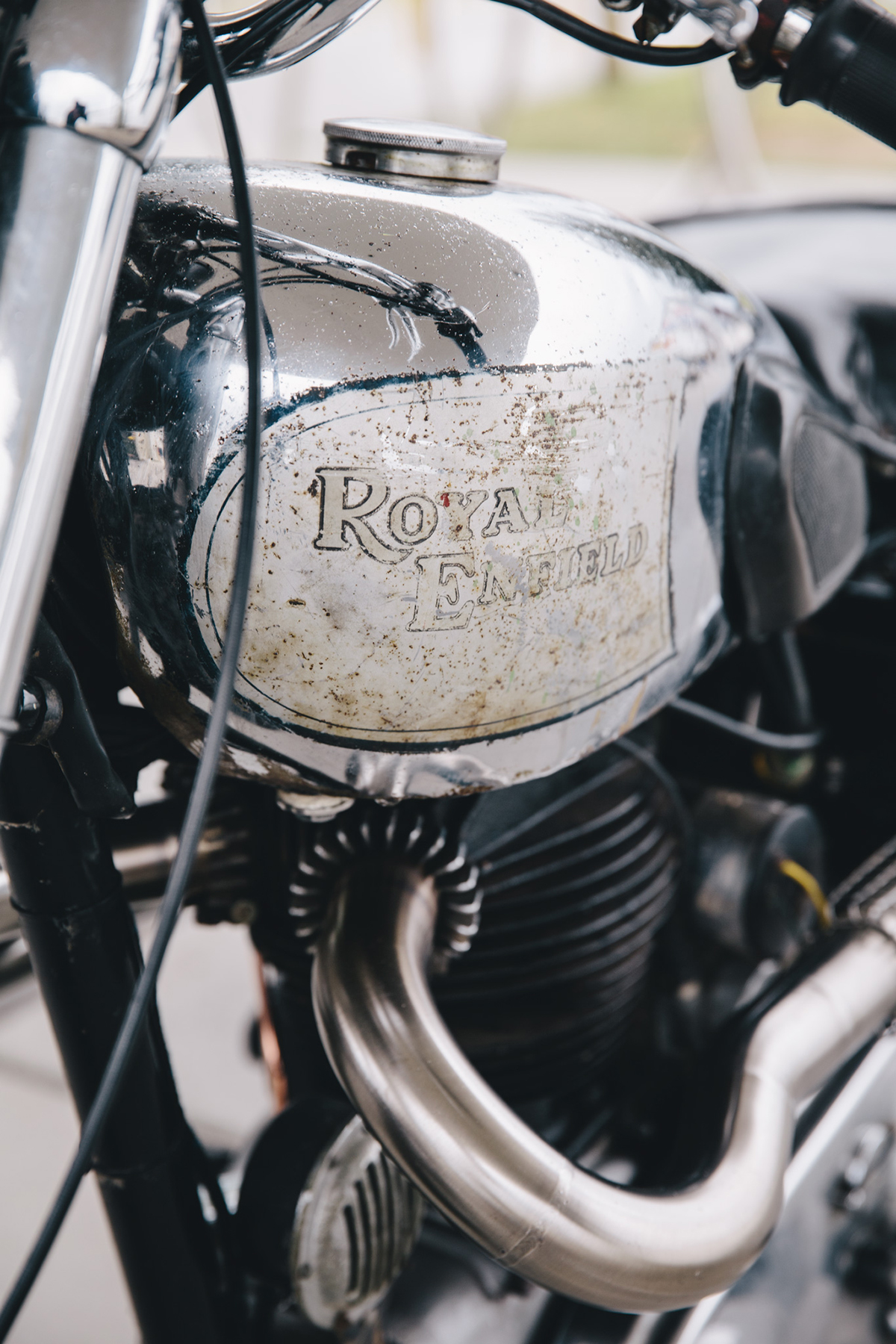 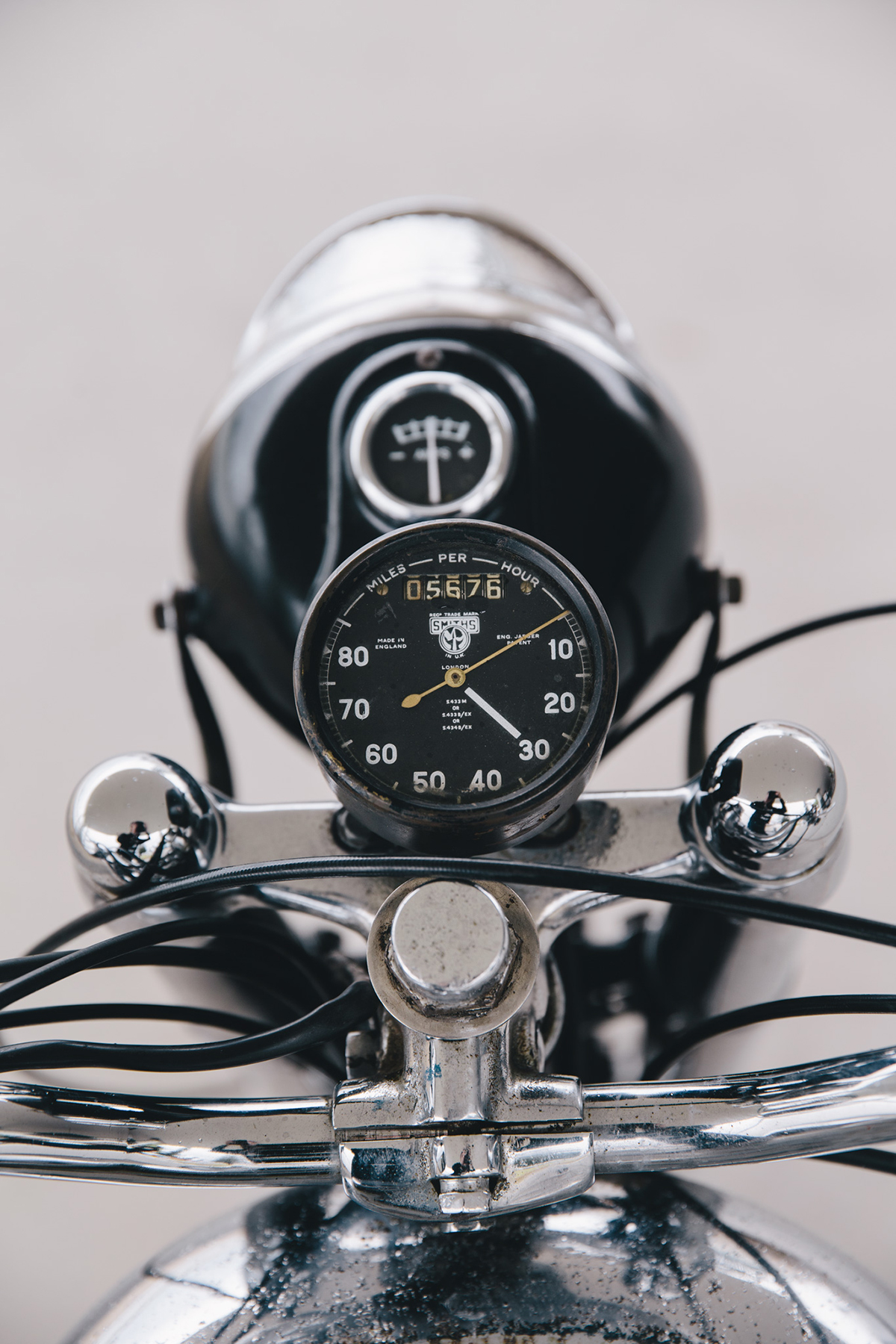 One of the crowning features of this machine would be its sterling tank, brimming with patina and history. “It took about a year of gently asking a lad who was restoring a 350 to part with his spare tank. It represents the feel I was after, and it still has the original hand striping and paint on it.

It’s a 68-year-old link to the past, the original painter is probably long gone but you can see where he has been.

Hand made and imperfectly perfect.” 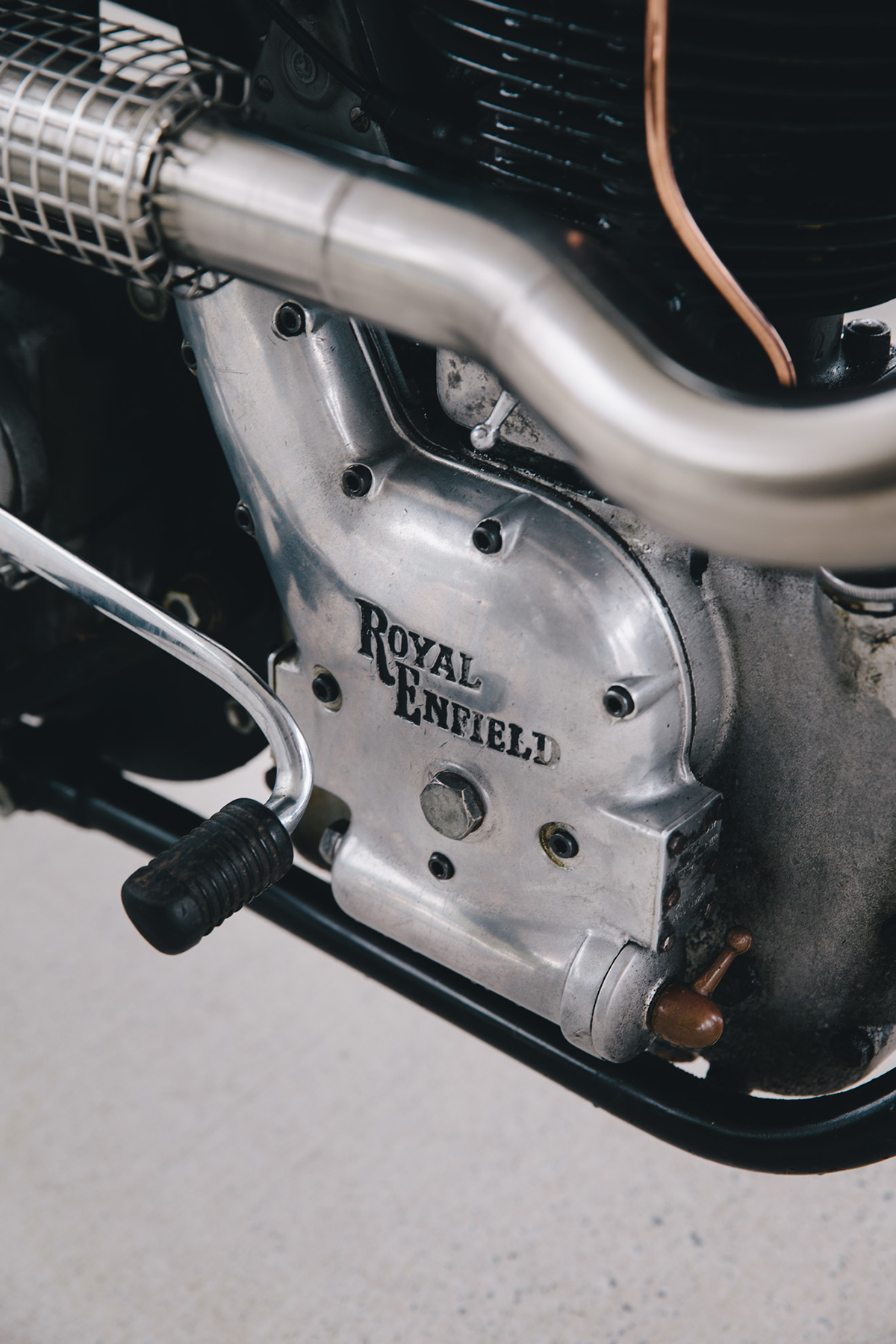 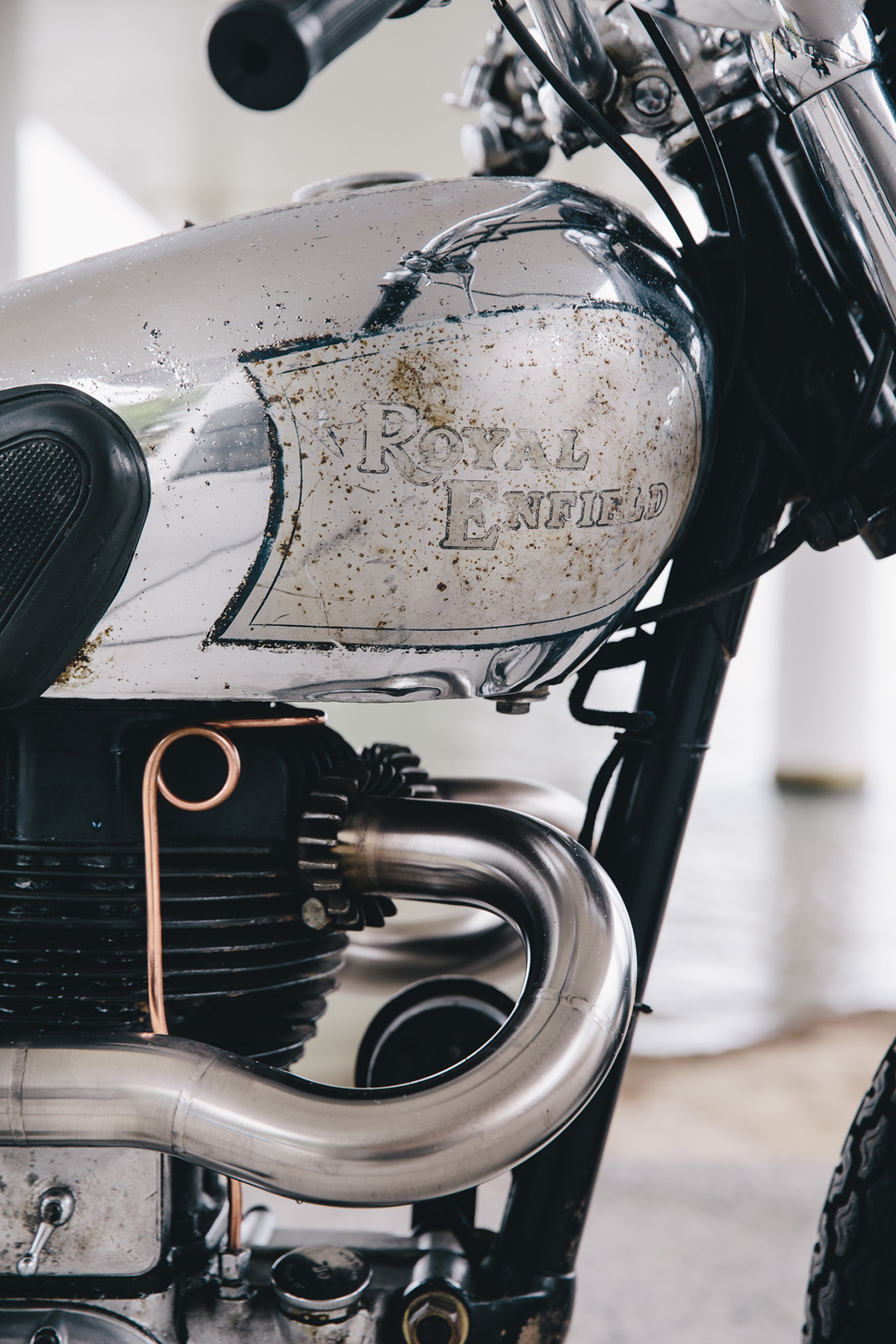 Once you’re done eyeing off the beautiful relic that is the fuel tank, your ears will soon be delighted with the sound of the 2-port exhaust that Clint fabricated himself. They belt out a thunderous refined aggressive tone that screams 1940’s. “I fabbed and tacked some stainless steel high pipes, which then had the welds finished off by a pro (cheers to Luke from Razorback Welding!) The sound of the uncorked pipes is glorious and quite unique.” 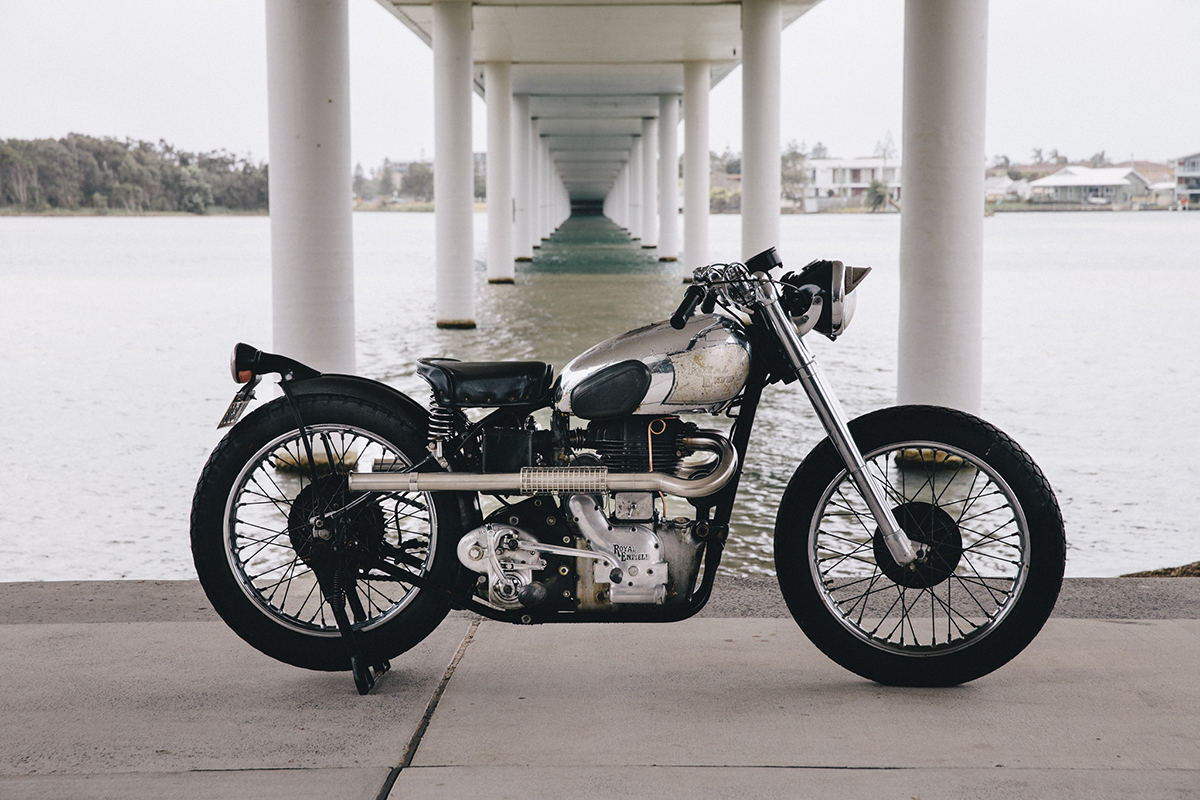 “She rides fantastic but i have to send a telegram to the wheels from the brakes to get it to stop.
and when she gets hot changing gears can be like fishing for crabs- every now and then you find one.Sometimes she gets cranky and still tries to rearrange the bone structure in my feet when kicking it over.

The bike’s not for everyone, but it satisfies the both the hot rodder and restorer in me.
It’s my second road bike and wont be my last, I want to do a 1920’s flat tanker and a Guzzi cafe racer next – that’s after my 1964 fairlane and 1928 ford are done…” 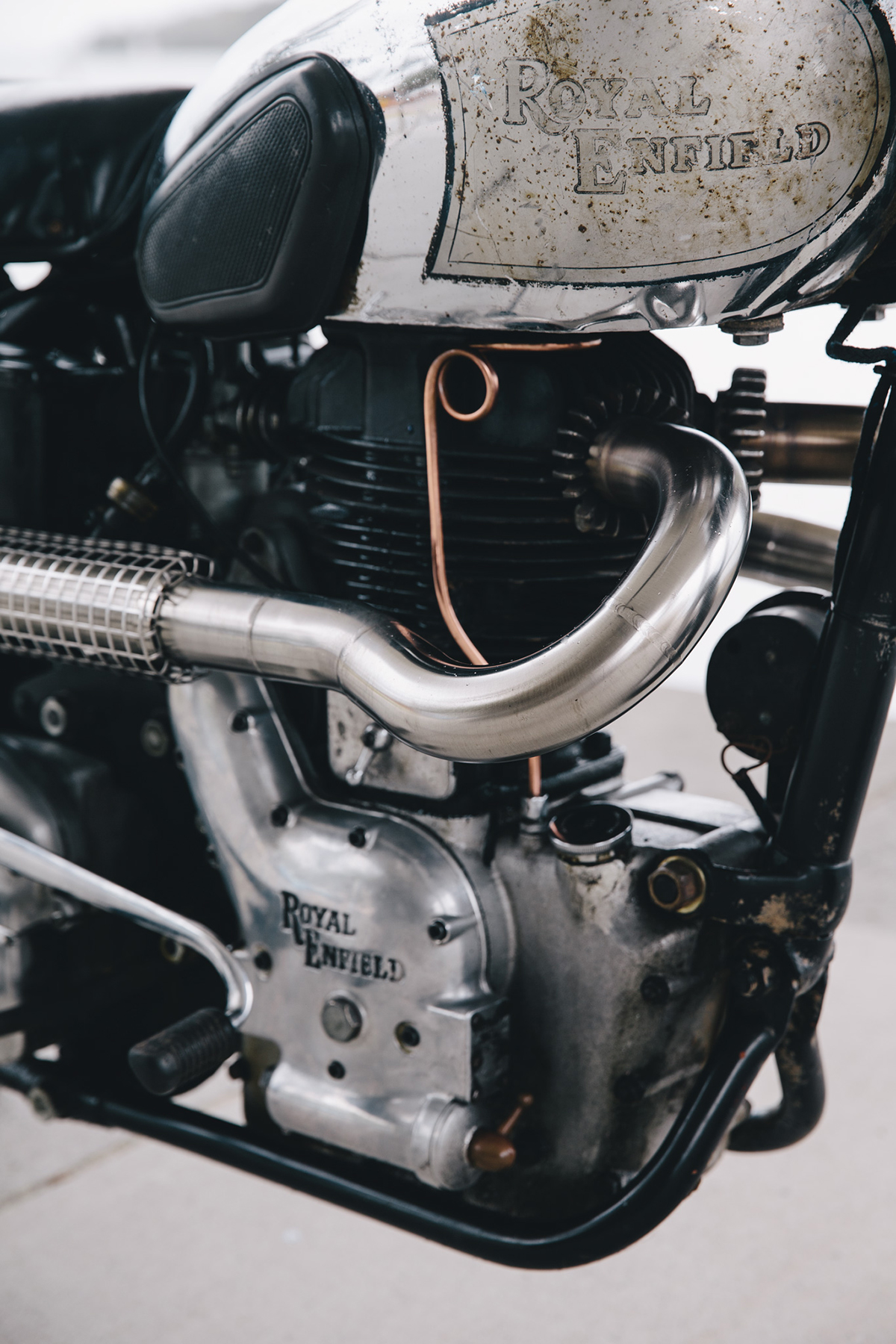 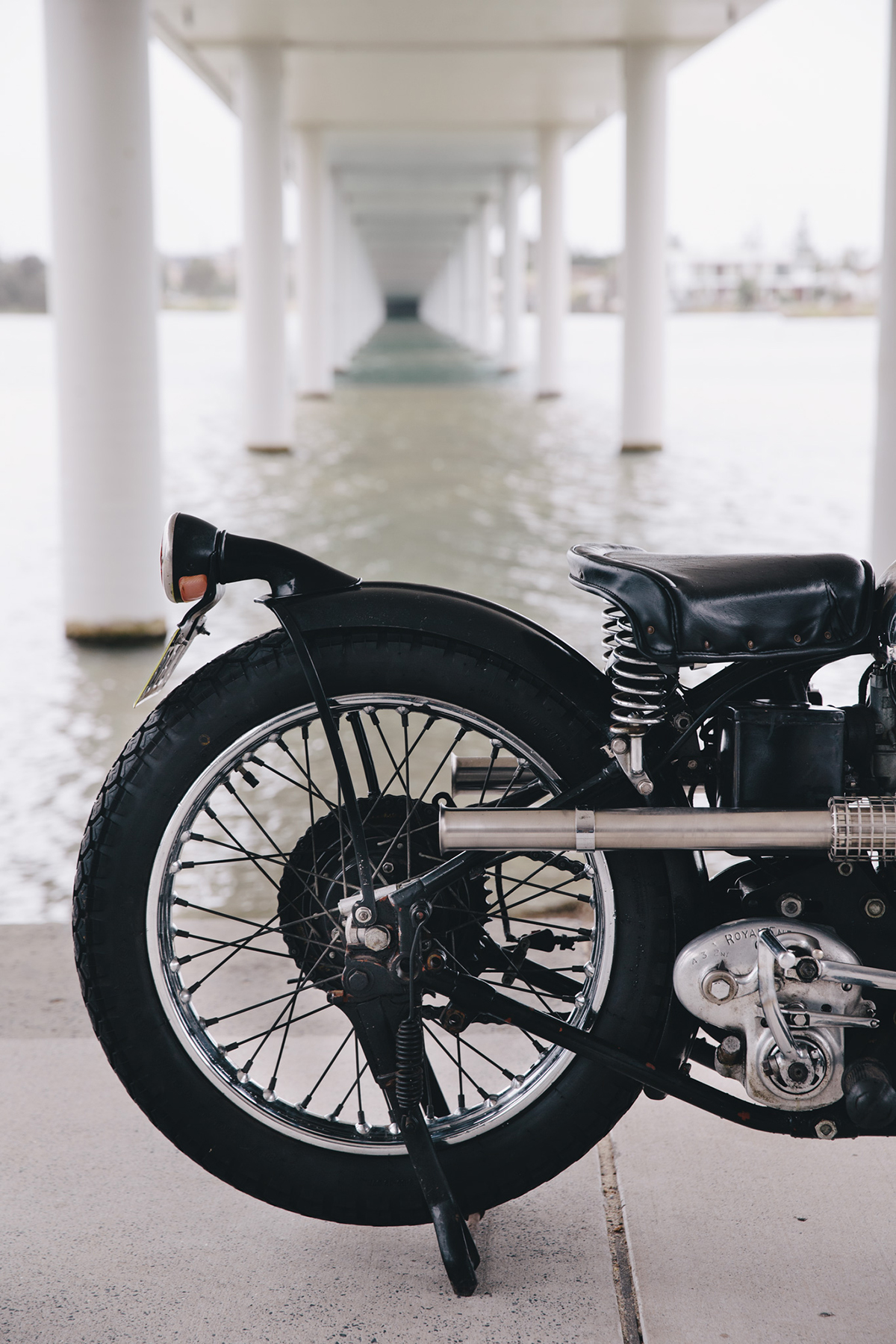