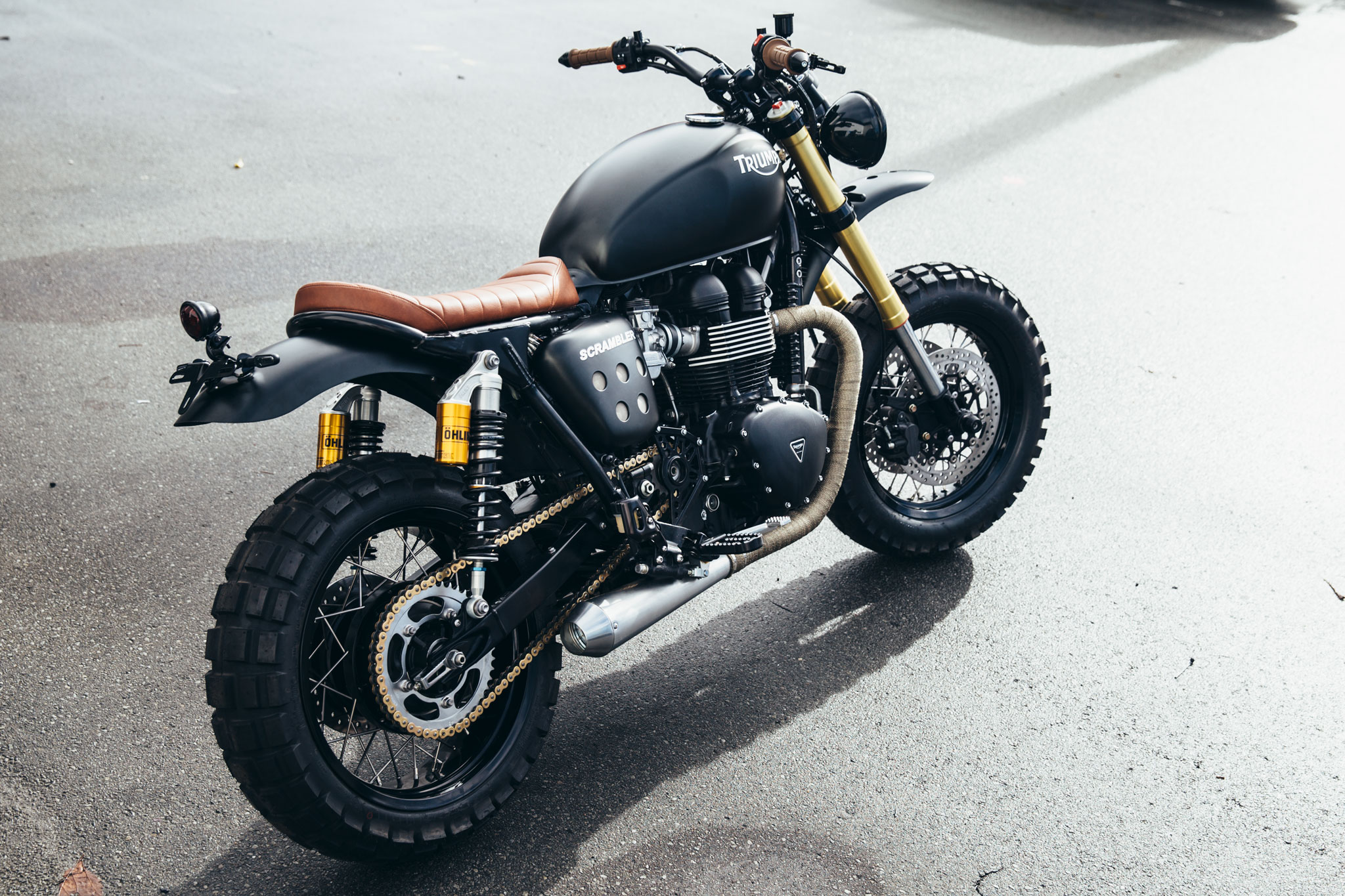 We had gotten wind recently while on a voyage to the magical land of Christchurch in New Zealand that there we were a couple of custom euro machines being created at a dealership, so naturally we had to swing by to suss it out. Sure enough we met Andy at First European, shop owner and designated lunatic who showed us some of the more customised work that’s been going on in his shop. 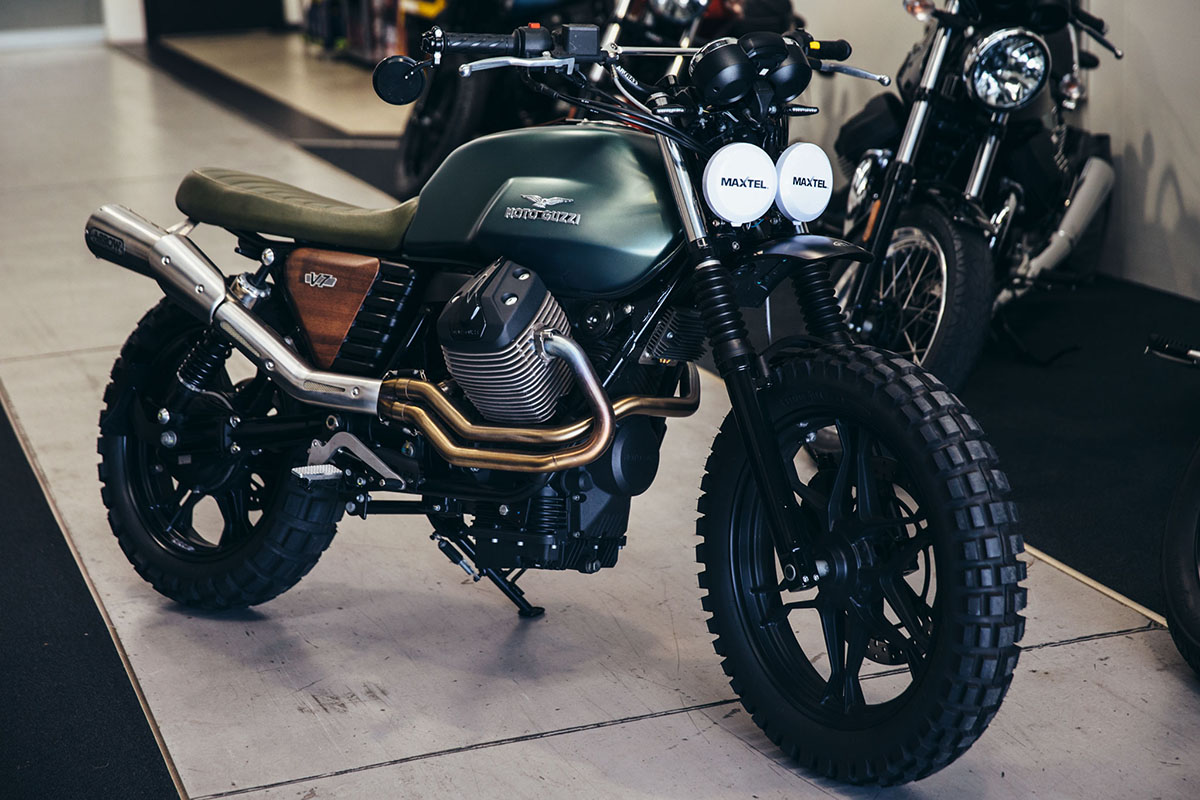 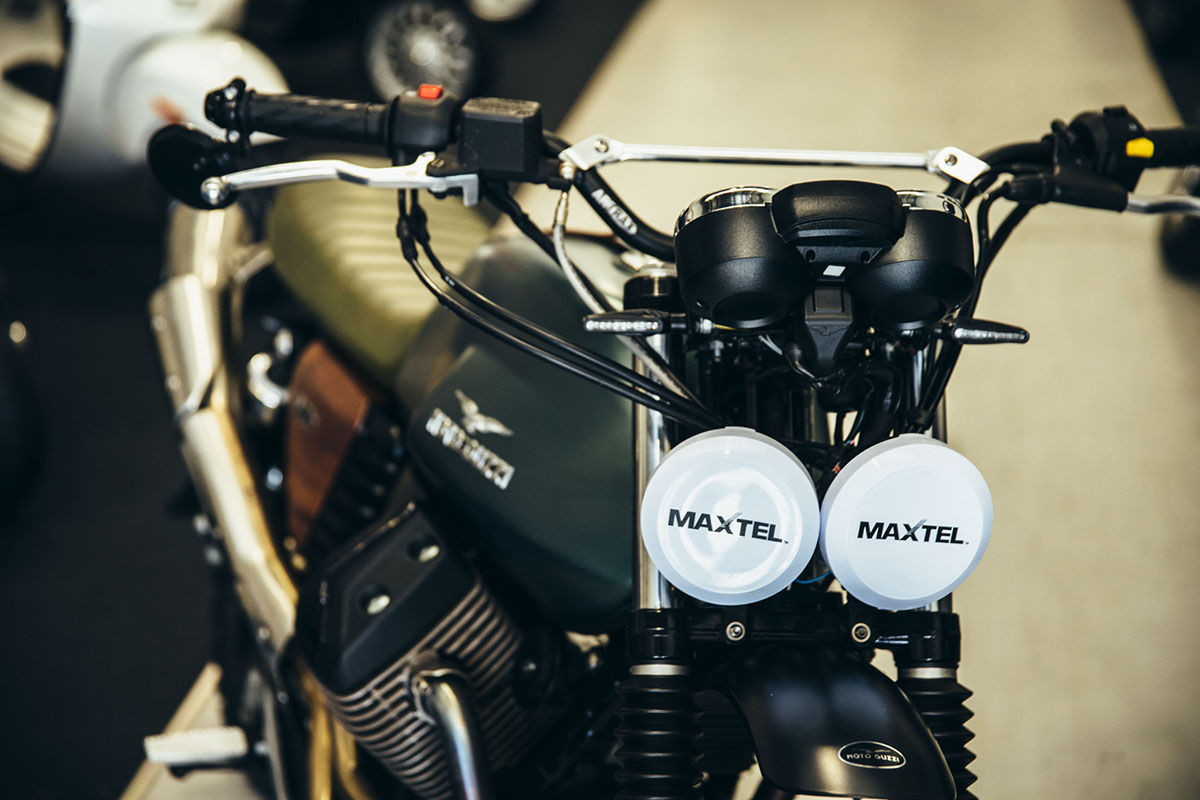 Andy has a bit of a history with European machines, having owned a car repair business that specialised in European cars, and also being European himself. Does being a pom count as being euro? Not entirely sure these days, definitely don’t care. What were we talking about again? Oh yes, motorcycles! Andy had taken over the First European and wanted to change its feel from the sterile and soulless stock floor to a place where riders could actually hang out and get extra work done to their bikes. “I consider our place to be a people shop, and as such riding with our customers is a big part of it. During the summer months we have a midweek ride every week where we go to a local bike friendly bar, enjoy some beer and pizza and just hang out.” 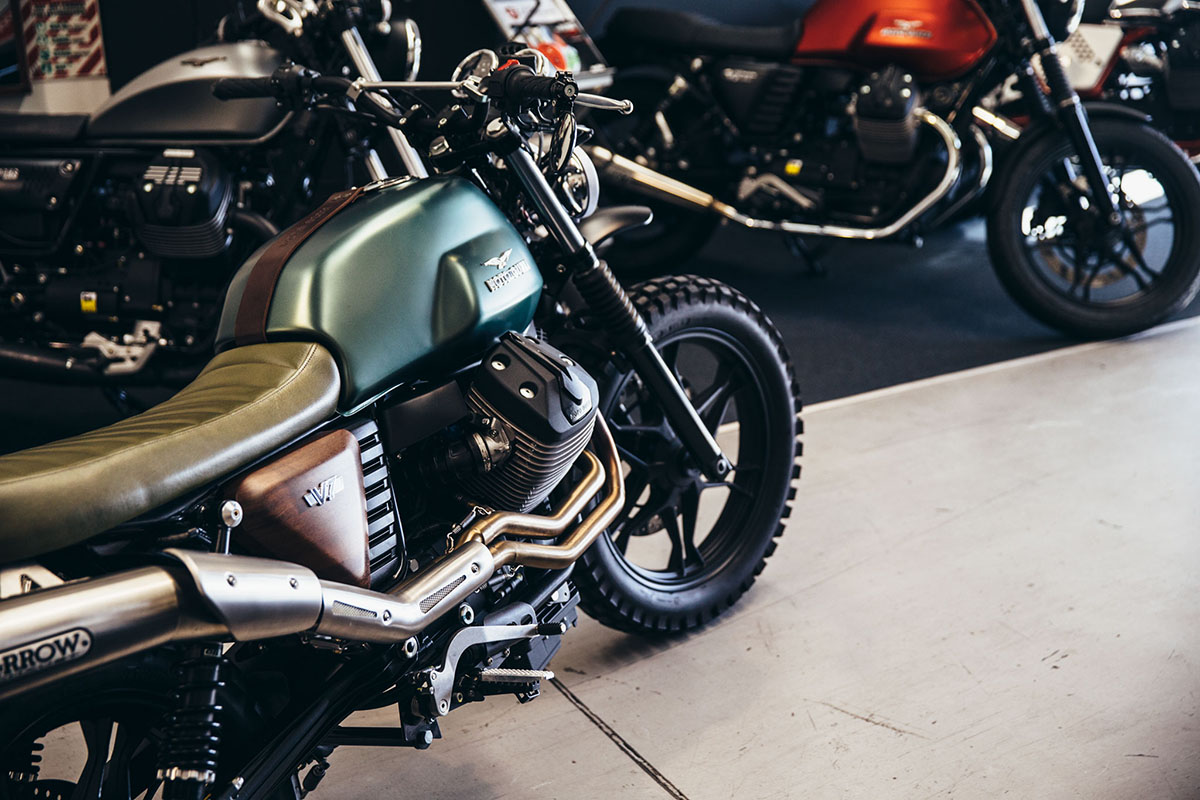 Andy has been a bike nut since he was a wee lad back home in the UK, getting ‘tank rides’ on his Grandad’s BSA Road Rocket. From there it would only progress onto machines for himself. “As a teen, a group of us from school all bough project bikes (pieces of crap that no one else wanted) and turned them into Scramblers so we could ride them on the local slag heaps. Then when licence time arrived we started on Fizzies (Yamaha FS1E) and Suzuki A50’s where we used to try and tune them by ‘porting’ them with rotary files and a Black and Decker drill. By then we were all apprentice engineers so we thought we knew everything there was to know about two-stroke tuning. As an apprentice I started to help one of the older guys at work with his race bike and then really started to learn about setting bikes up and tuning them” 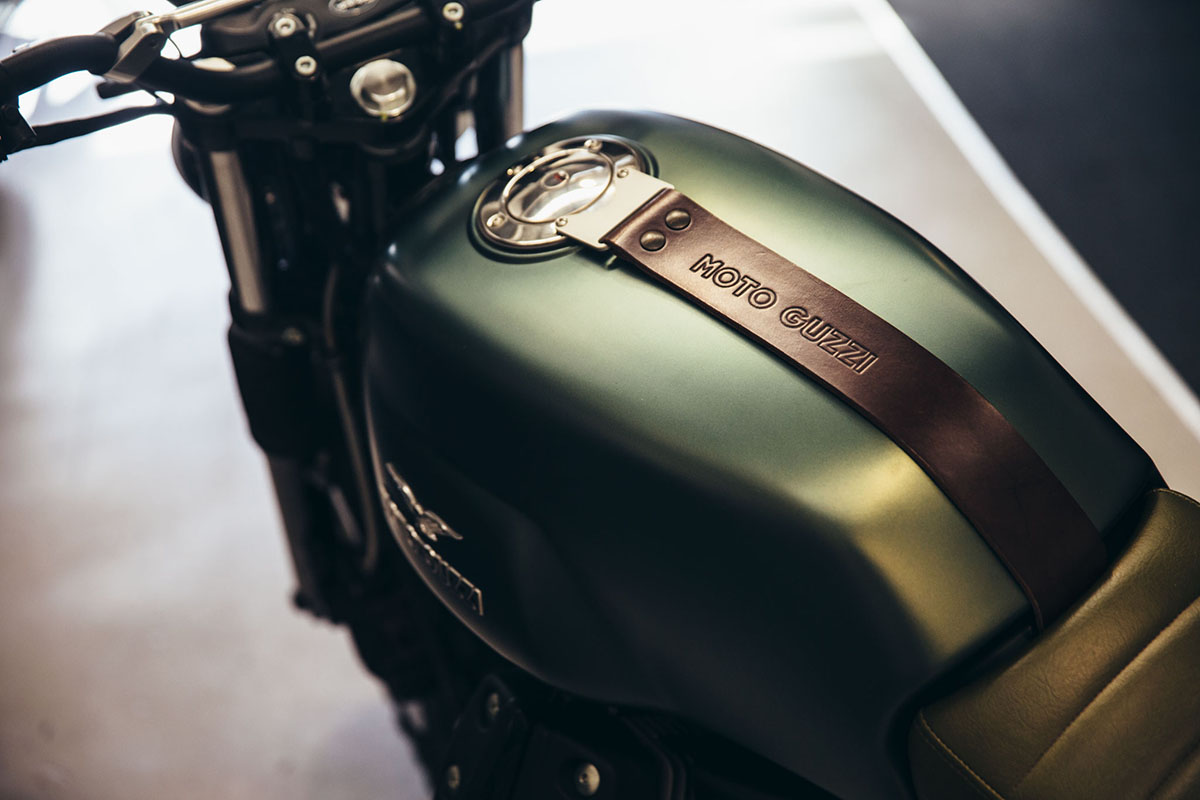 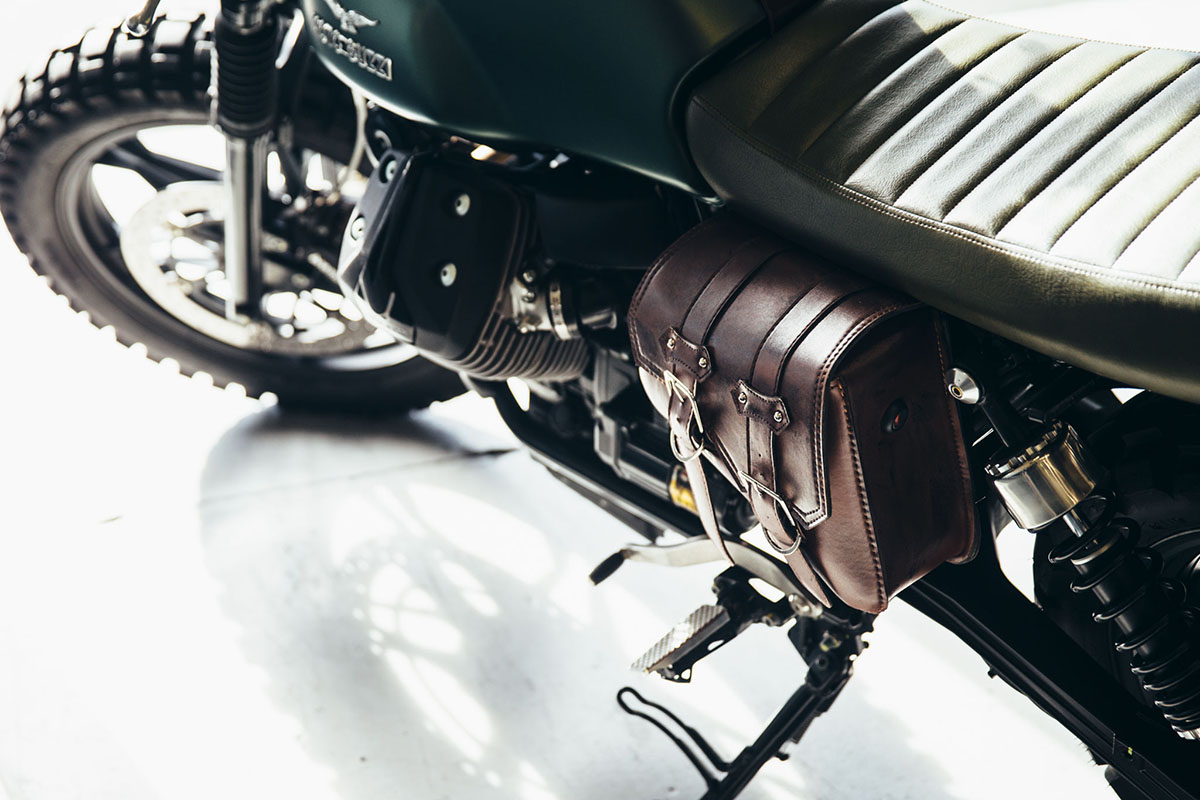 Now that we know a bit about Andy and have had a hearty dose of nostalgia, it’s time to check out a couple of nice machines that are currently living in his space. First up is a very adventure inducing Moto Guzzi V7 Scrambler, dubbed the Green Meanie. This bike was somewhat of an accidental project, in that Andy had a completely stock standard V7 Stone in that shop that needed a bit of livening up. “I knew that Guzzi did some neat bolt on parts and thought that an Arrows high level pipe might look good. We fitted this to the bike, but it looked a little staid, so then began the discussion to build the bike the way we thought it should look. We removed the rear guard and fitted small LED indicators and tail light and fabricated a side mount for the number plate. We then set about tweaking the arrows pipe to firstly make it look cooler on the bike and to secondly make it sound better. To do this we removed the system and took the catalytic converter out of the mid pipe making it a “proper” open pipe.” 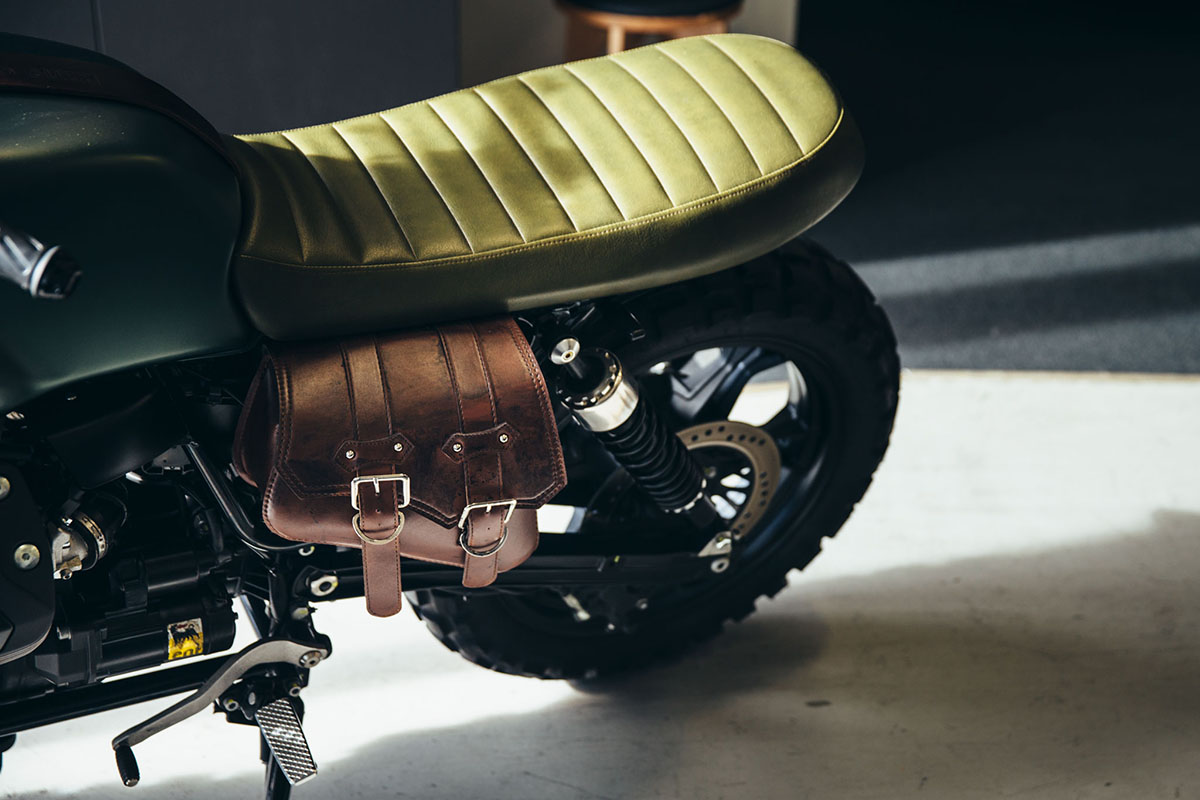 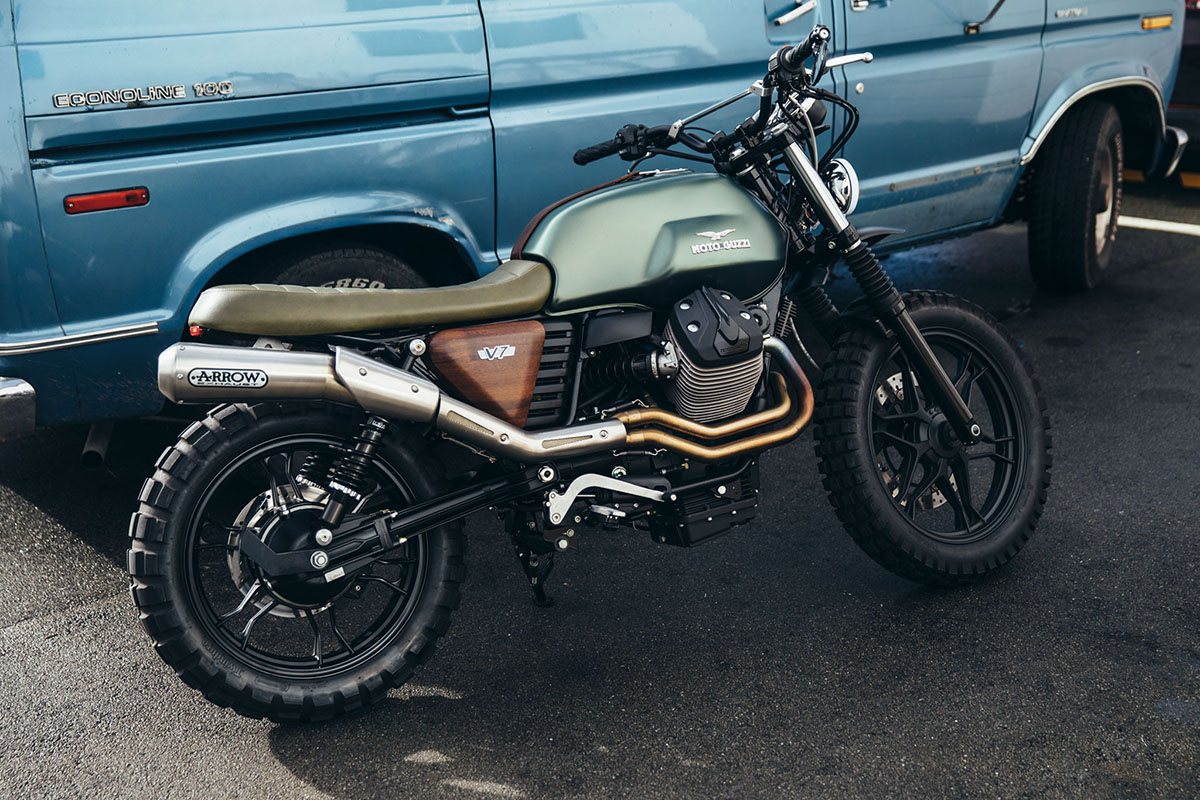 “We then adjusted the angle of the tailpipe section so that it tucked back much tighter to the back of the bike. With this done we then set about changing how the front of the bike looked. Here we removed the headlight and bulky front indicators and fitted two 4 inch units and small LED indicators. Then we whipped off the front guard and chopped it about to make a high guard. At this point the basics of the bike were coming together so we then had to decide on its finishing touches. Here we picked the Guzzi leather tanks strap from a V7 racer along with aftermarket motocross bars and risers. We removed the left hand side panel and replaced with a small leather satchel and trimmed the right hand side panel in a wood effect vinyl.” 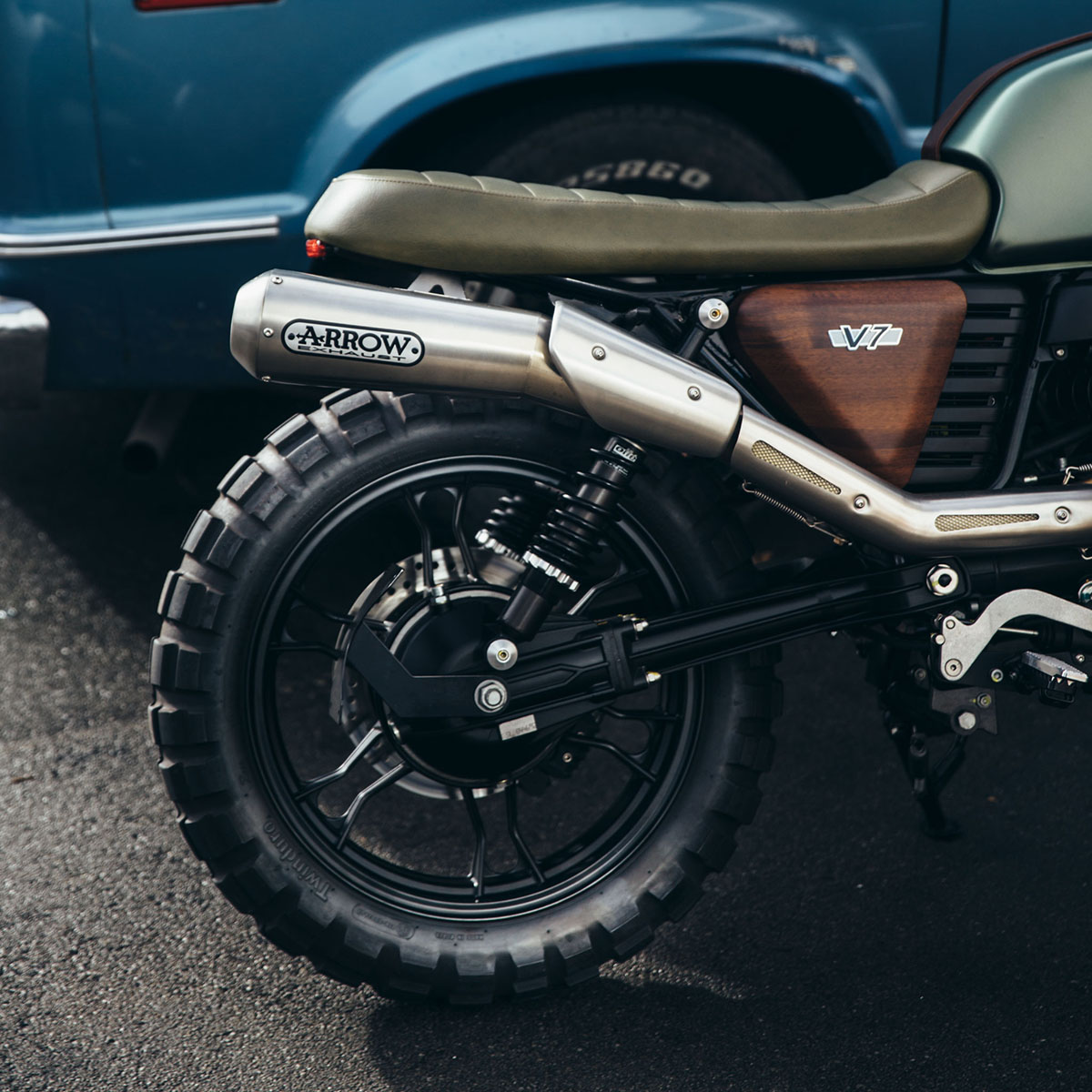 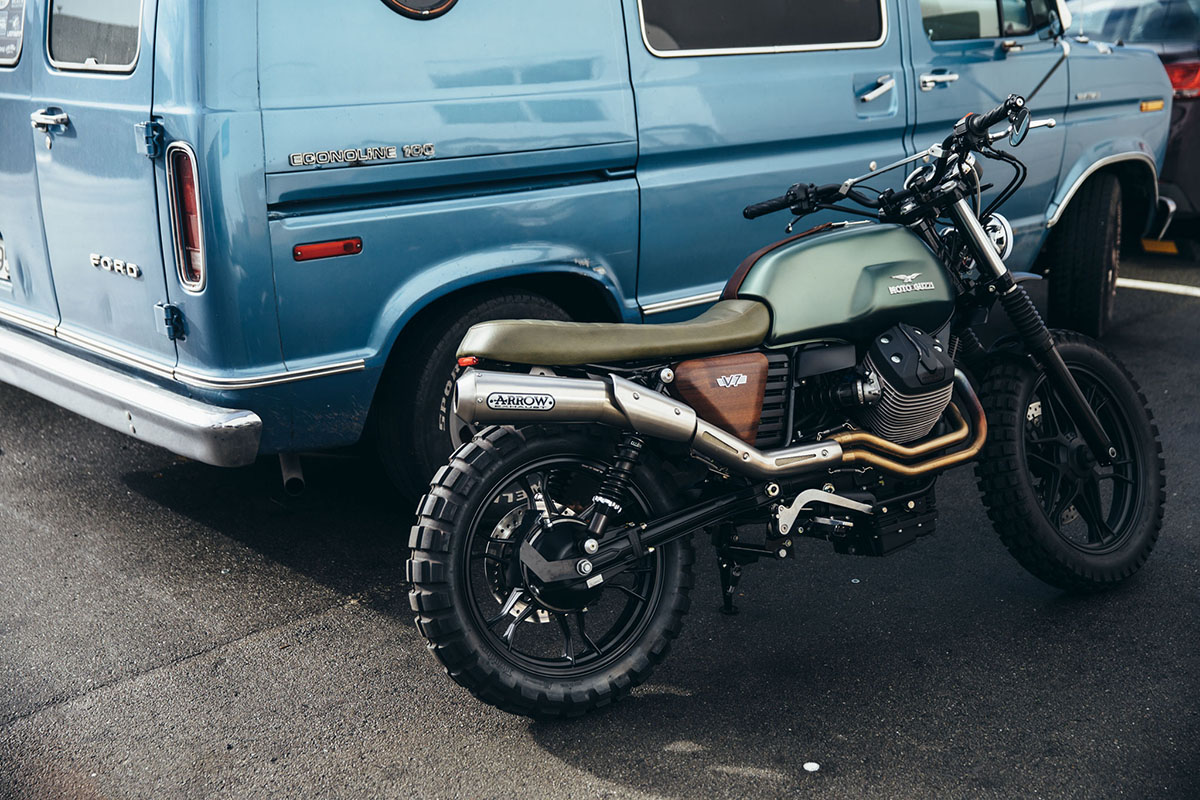 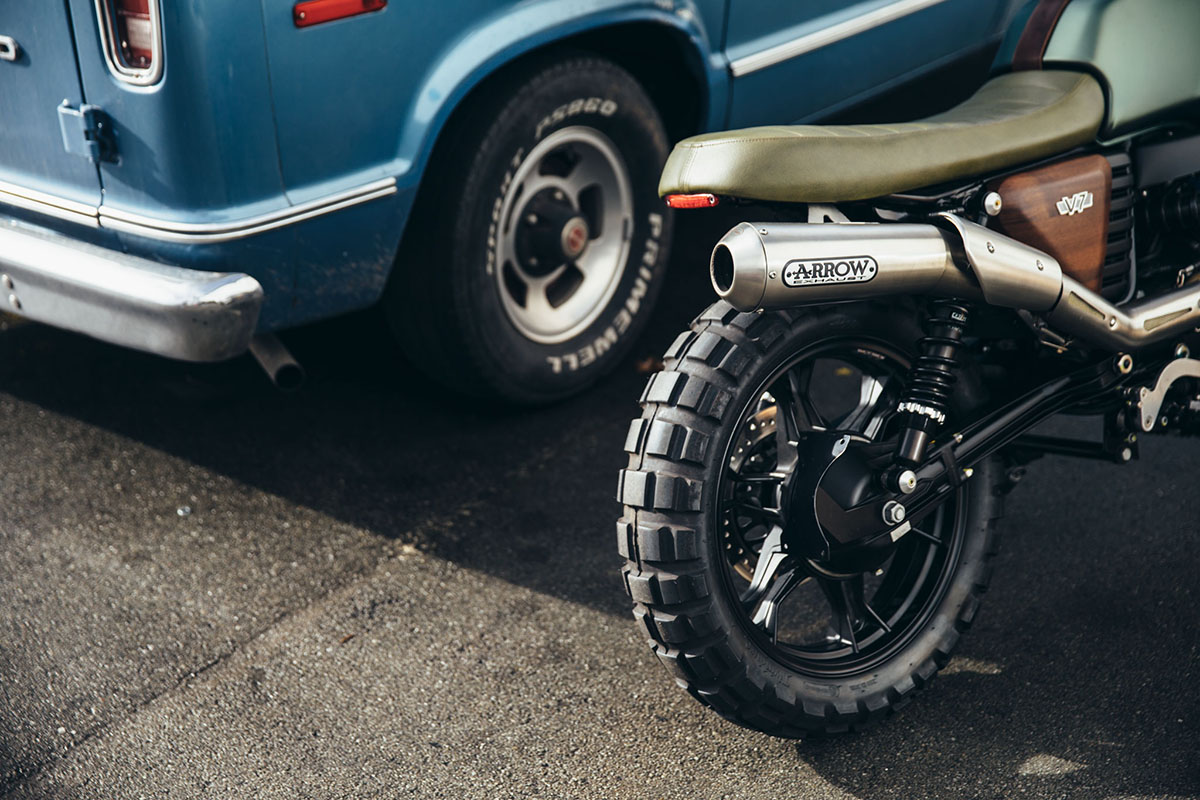 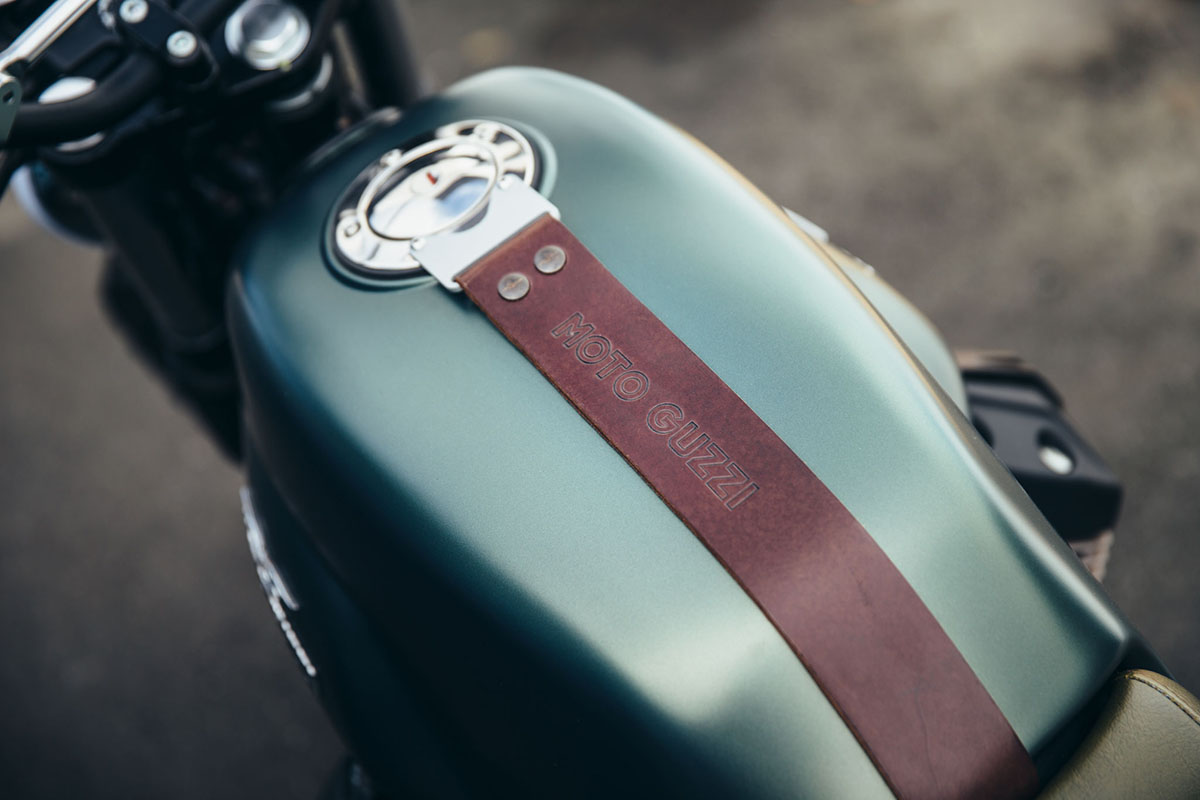 Breaking away from Scramblers for the time being, we now had a perv and a gander at a bright speed machine, a Triumph Thruxton R 1200 Café Racer. The popularity of these bikes since they were released were of no surprise once you sat your arse down on the seat and got going. This is one of, if not THE best modern classic around. This one in particular was crafted as Andy’s personal bike. “With this bike we went for a look that sort of said this is what the factory would have built if legislation didn’t get in the way. So first up we removed the silencers and catalytic converter. I wanted very traditional reverse cone megas but no one made anything that looked right so in the end we bought two pipes put them in the lathe and machined them to suit we also had to make up decat pipes (again when we did this bike you could not by aftermarket decat pipes) we decided not to siamese them as we wanted to highlight the engines 270 degree note on overrun (just posing really). We removed the rear guard assembly and made up an aluminium tray to act as a tail tidy and to carry the ECU, to this we fitted a small integrated tail light and indicator unit and a small number plate (apparently number plates just shrink when you wash them officer).” 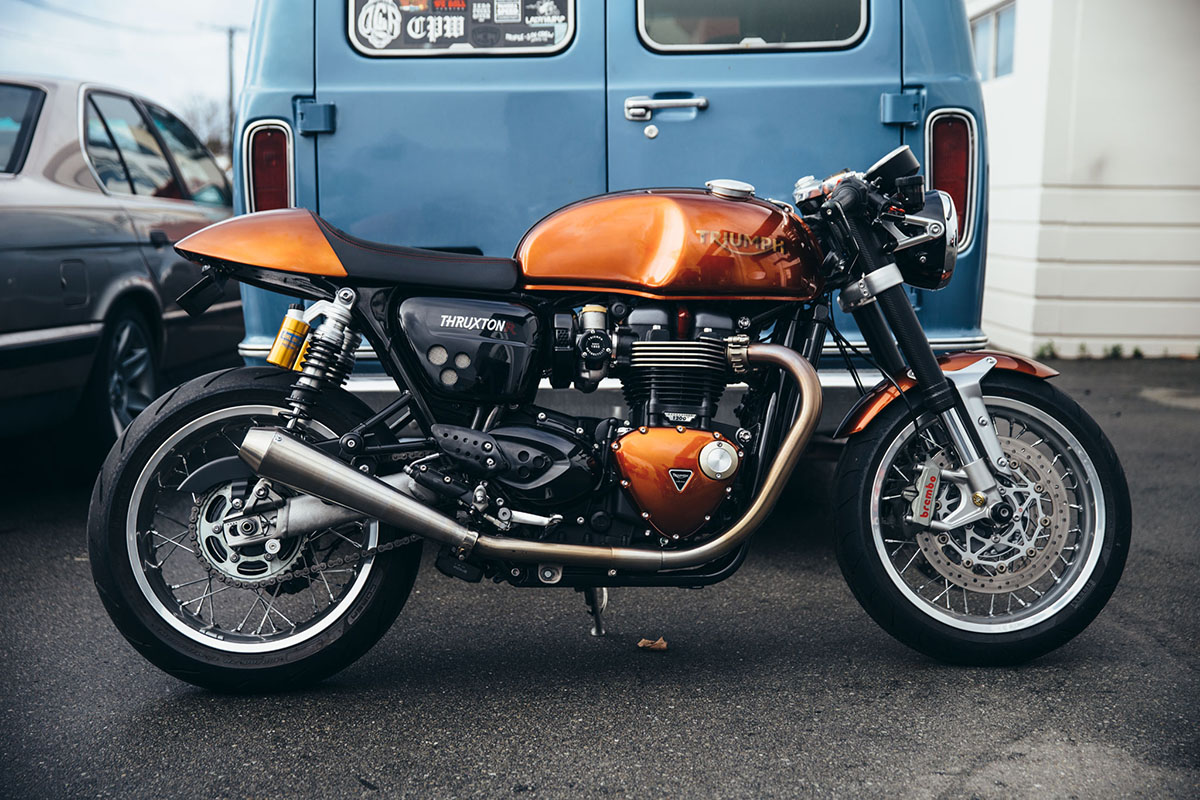 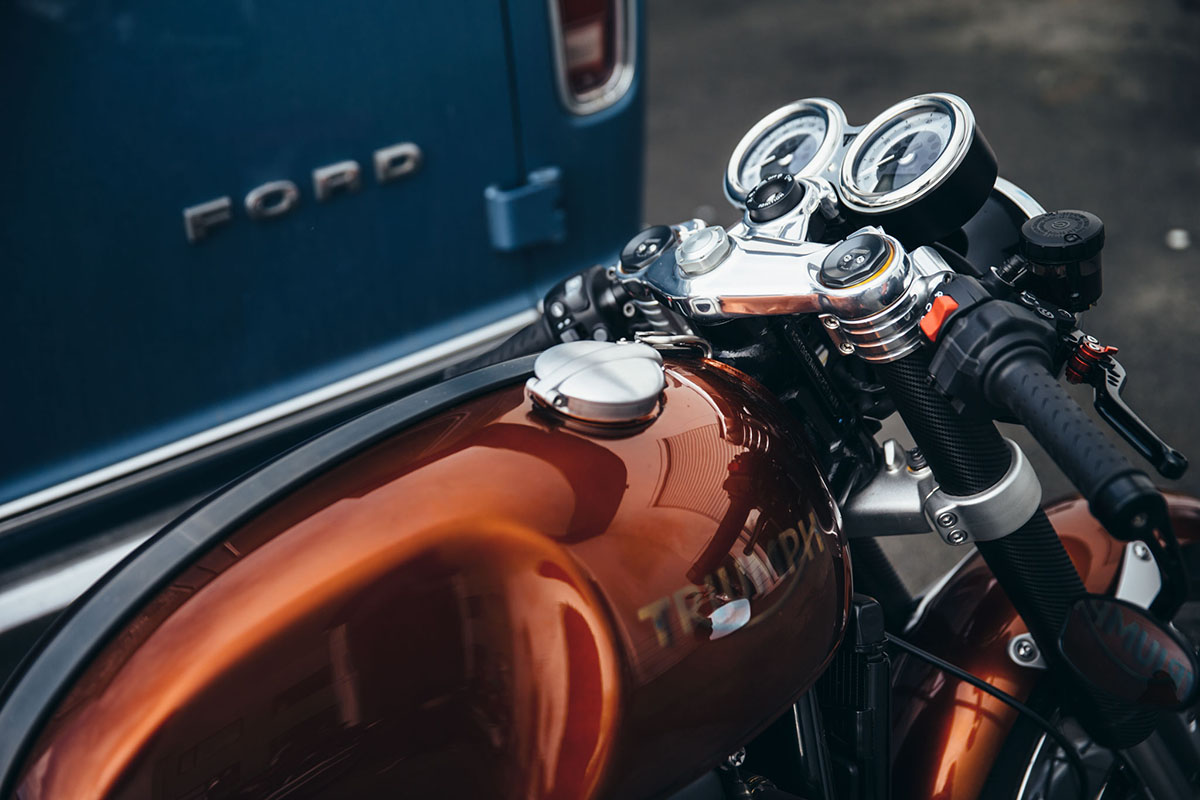 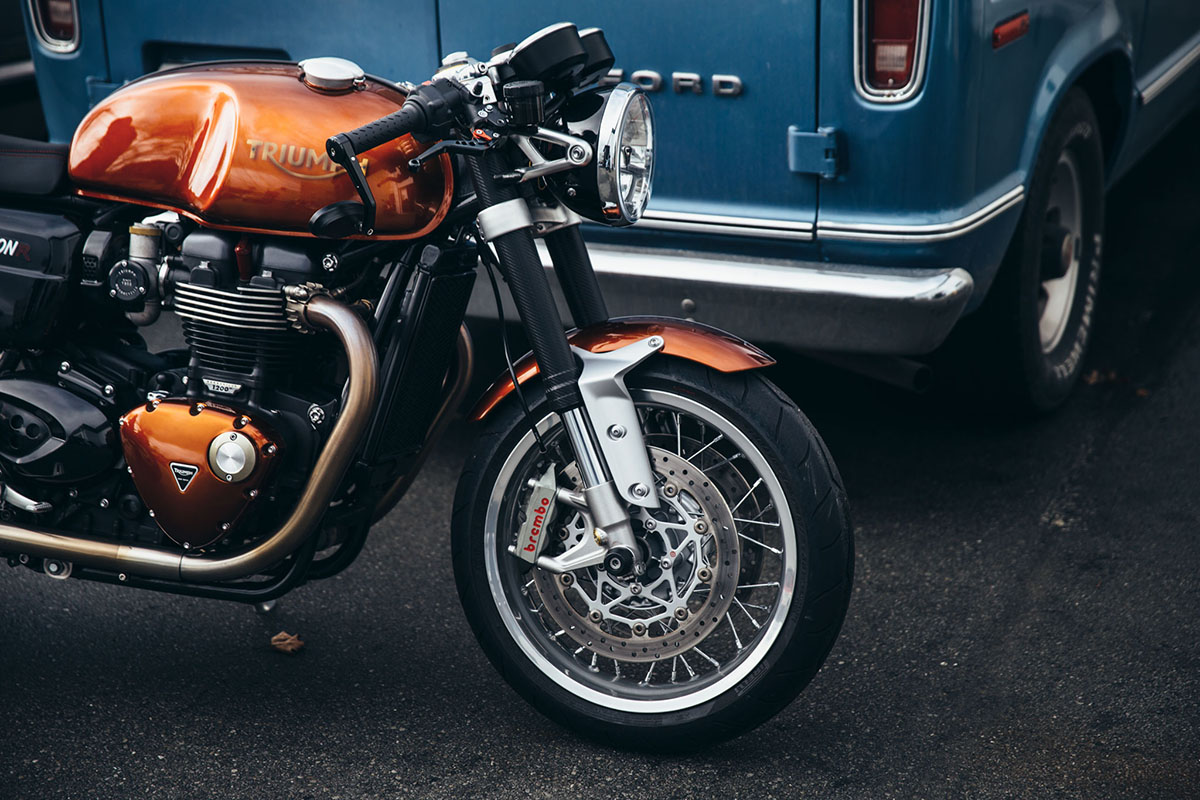 “Up front we removed the factory bars and fitted full low clip-ons with short levers. Having got rid of the front indicators into the tail light assembly we had to fit some small units to the front. Standing back and looking at the bike at this stage the front looked a little awkward, so we decided to lower the headlight and instruments by 22mm to give the bike a cleaner more balanced look. With this done we had a good looking and great sounding café racer that went and handled the way we wanted but although it looked “nice” it wasn’t truly custom. We then sat down with Lee our custom painter from James Lee Design and talked about some designs. We finished up by going for an orange base with a metalflake so as to create a copper tone. I like the new Triumph logo but I wanted the badges on this bike to look older so Lee airbrushed them in a distressed pattern and finished them off by painting little rivet heads onto each badge.” 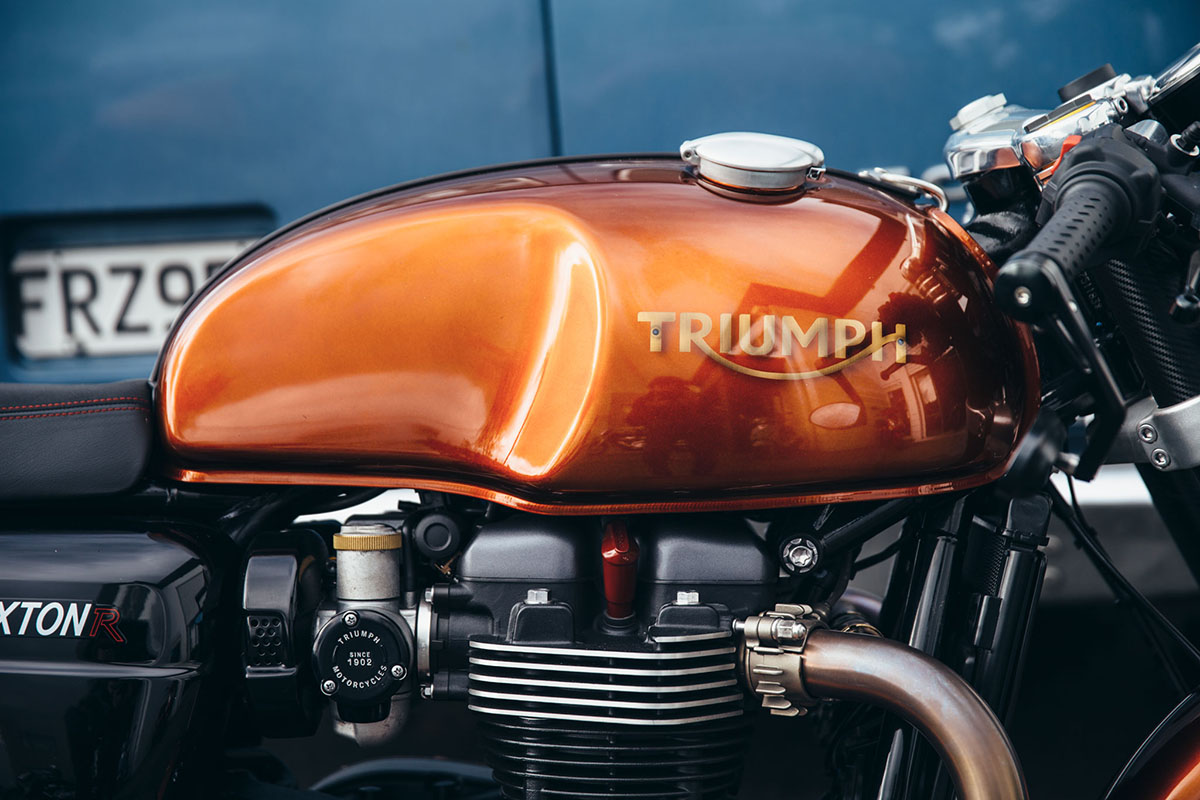 And last but no least, or something, is an incredibly aggressive Triumph Scrambler that was probably a bulldog missing one eye in a past life. This beast is aptly named ‘Frankenscrambler’ which is great coming up to this spooky Halloween season. “The Triumph Scrambler was built for a customer. The basic design brief was “aggressive and cool” We started with a brand new Triumph Scrambler off the showroom floor, we removed the entire front end and replaced it with White Power fully adjustable USD forks, we knew we wanted to have twin disc brakes up front and we wanted to use 17” wide wheels front and rear. We sourced a 3.5” wide rim for the front and a 5.5” wide rim for the rear and then laced these onto triumph hubs.” 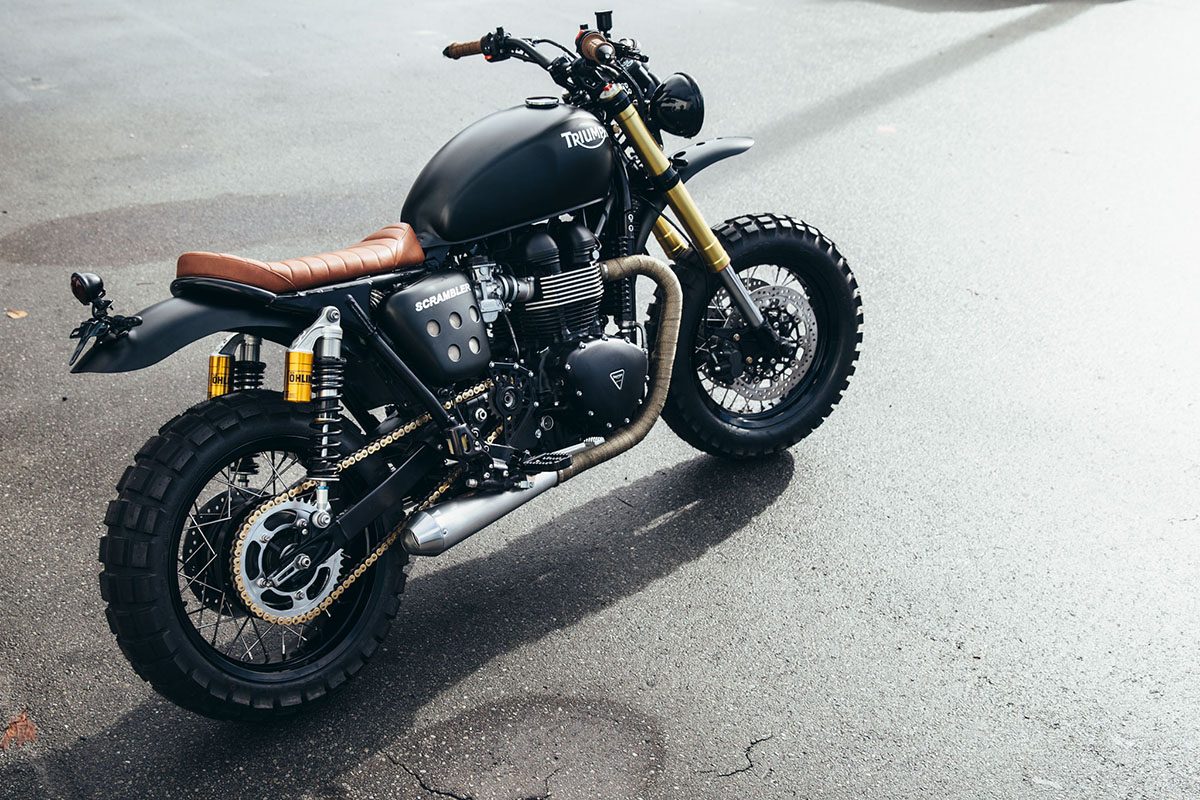 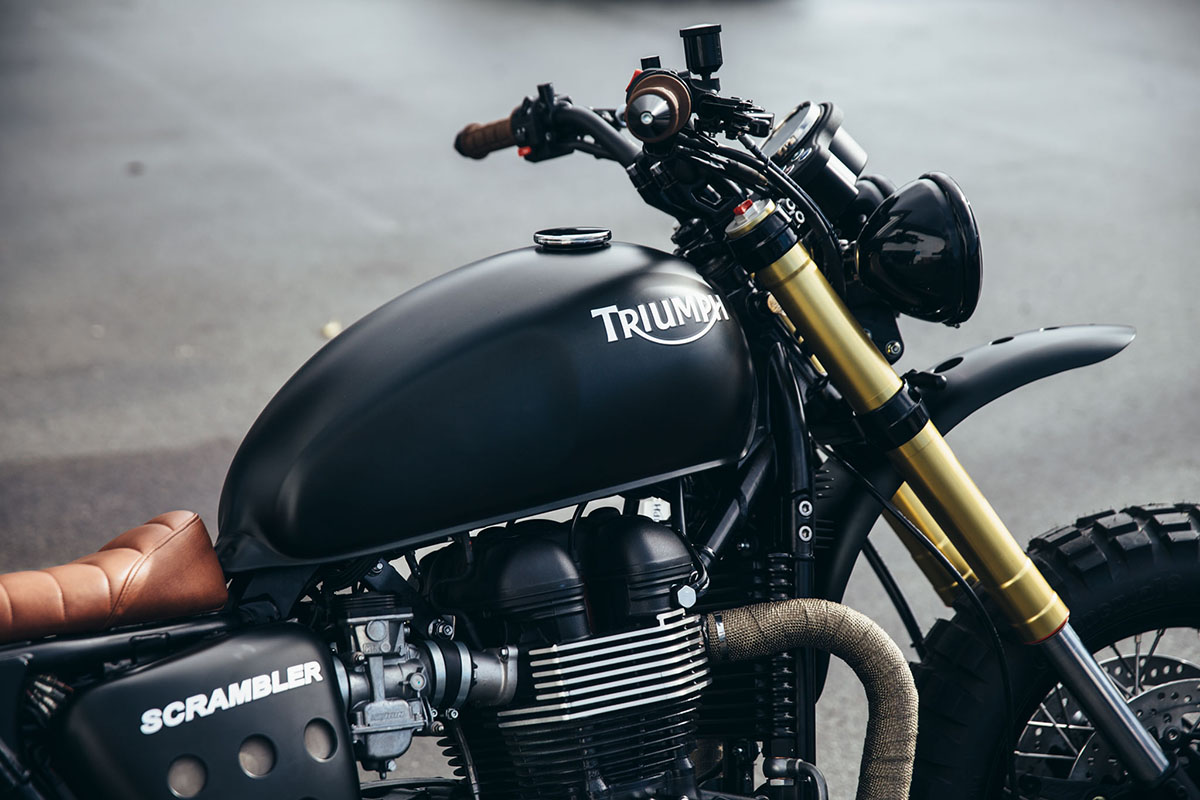 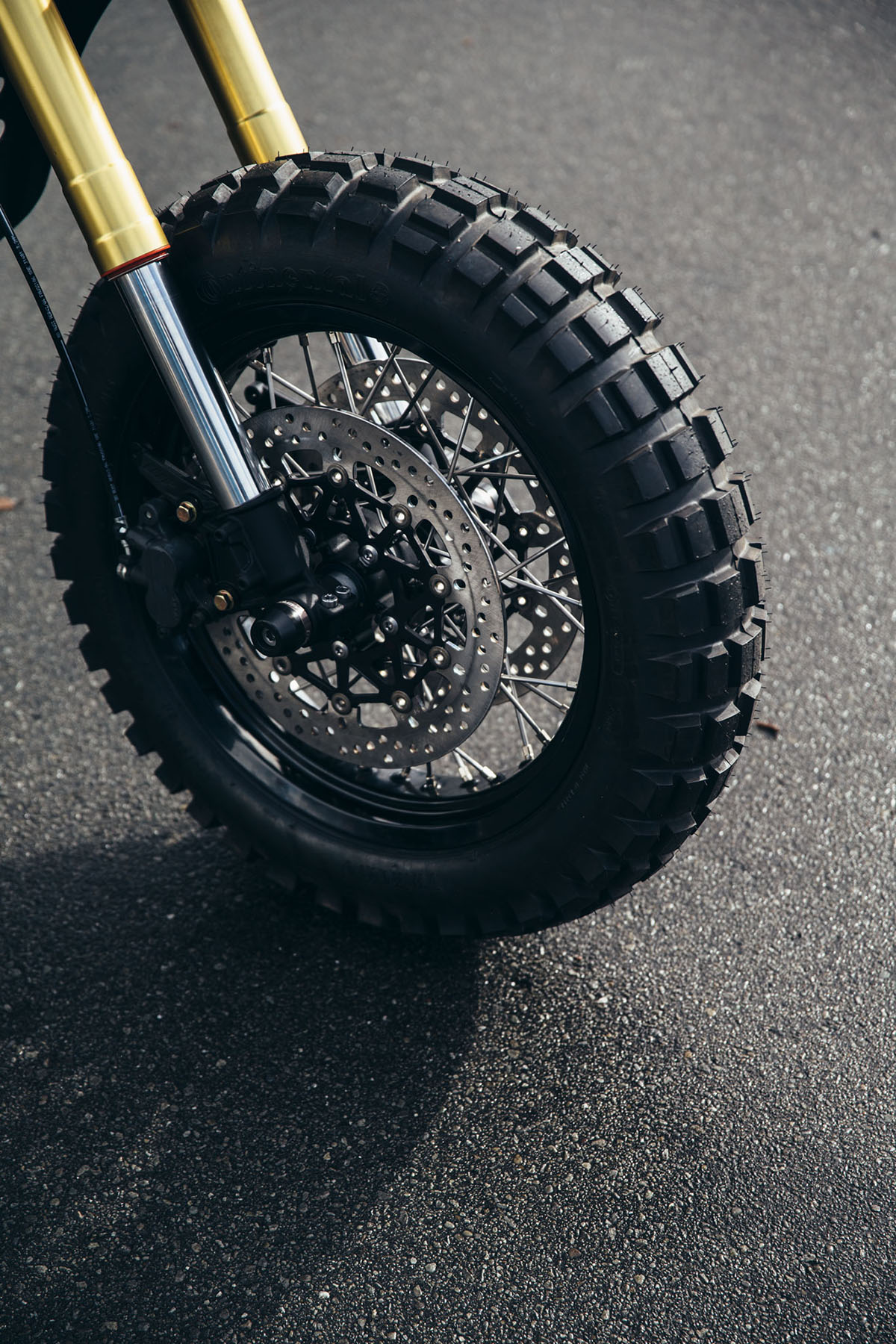 “At the rear we opted for Ohlins remote reservoir shocks and we shortened the frame to create a more balanced look. The exhaust system for this bike has changed a few times, with us having made two different high level systems before finally opting for the two low mounted reverse cone silencer system currently fitted. The paint on this bike was a bit challenging as although it probably doesn’t show too well in the photos it is a green base with satin finish black over, so when the sun shines the green shimmers through the black. Also the tank transfers are “in” the paint rather than on it, but it means that the tank feels smooth to the touch and is just that little bit different. There are plans for a big bore kit and bigger throttle bodies at some stage so watch this space.” 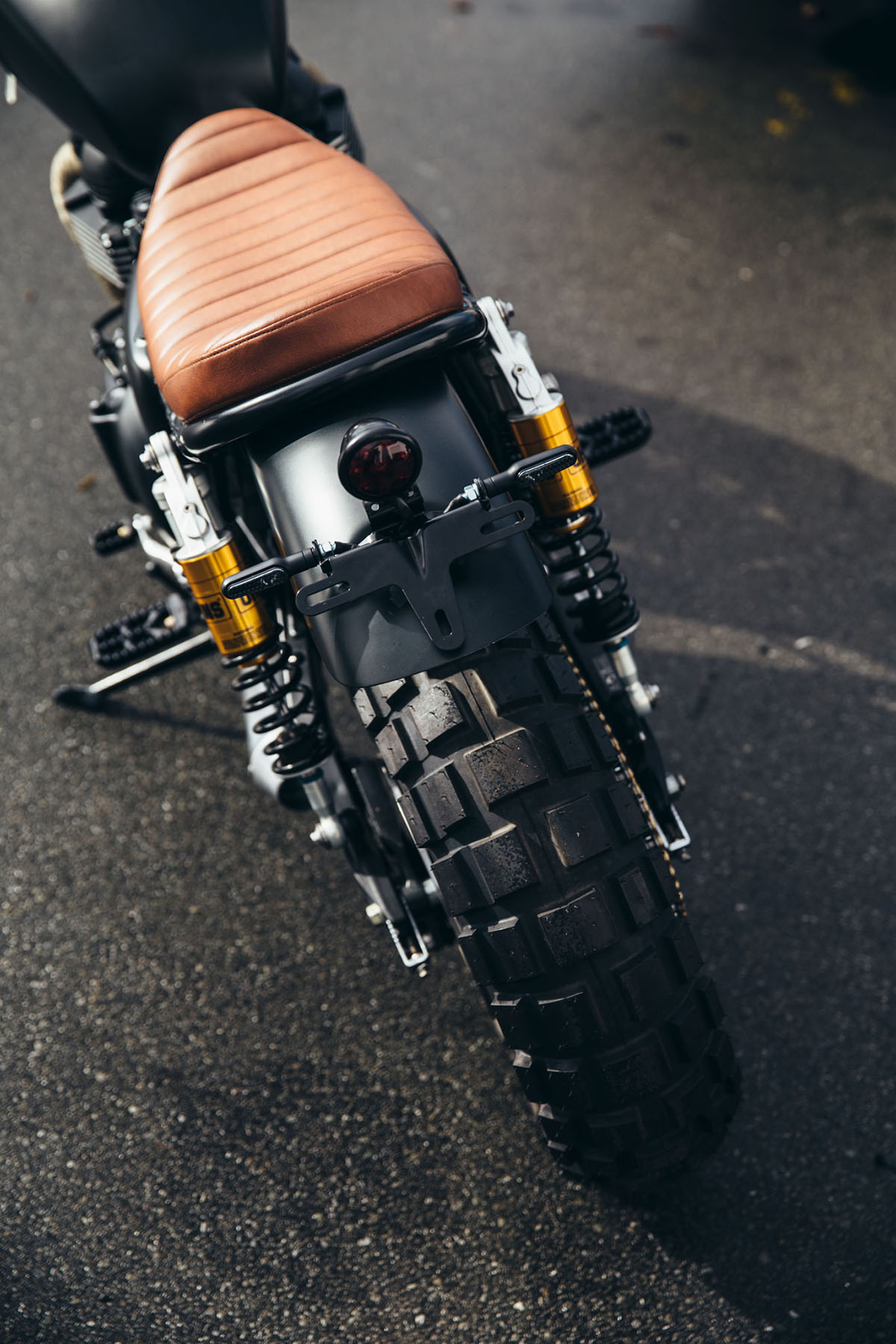 “The custom work we do for customers is pretty regular but tends to be what we would term mild café racer conversions of peoples standard bikes with three or four full builds on top of that per year. We will keep customising bikes as we go along. We have a couple of older Triumphs that we are doing conversions on at the moment, the next sort of show build will be a Triumph T120 that we intend to build as a scrambler.”

For more on Andy and First European check out their website here – http://www.firsteuropean.co.nz/ and be sure to pop in and say G’day. 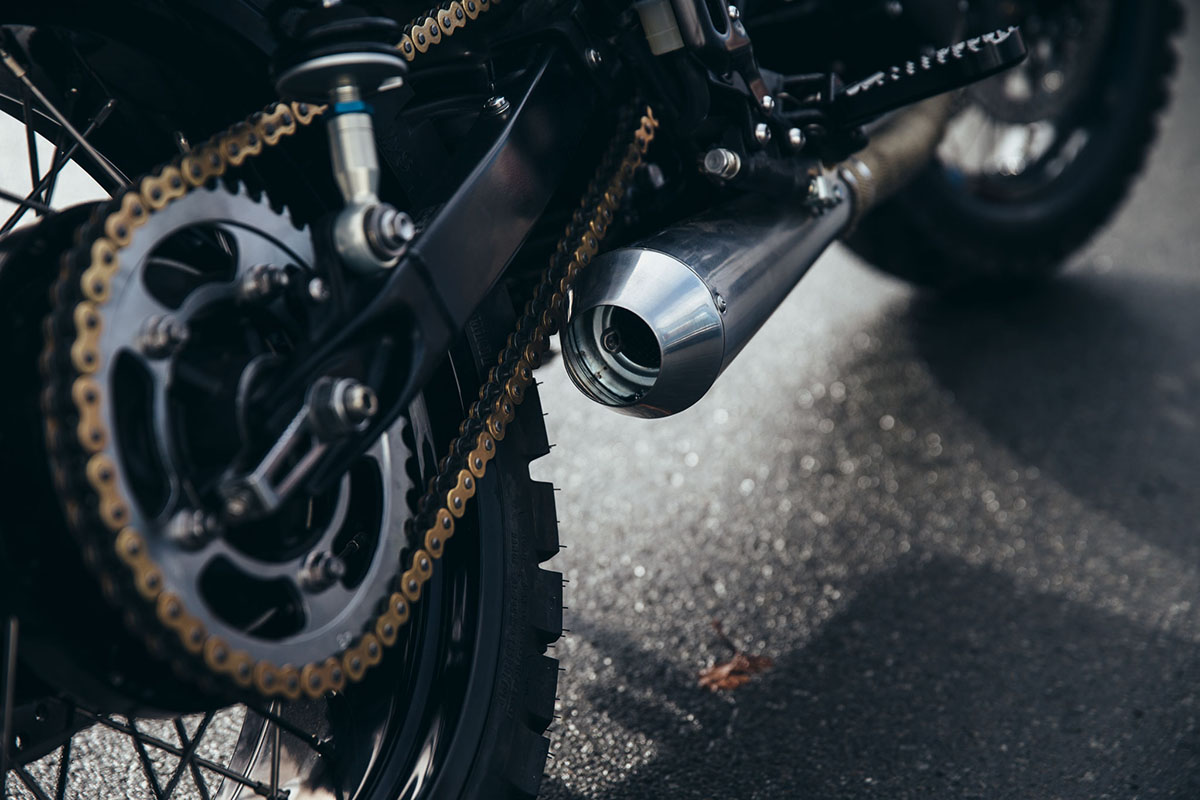 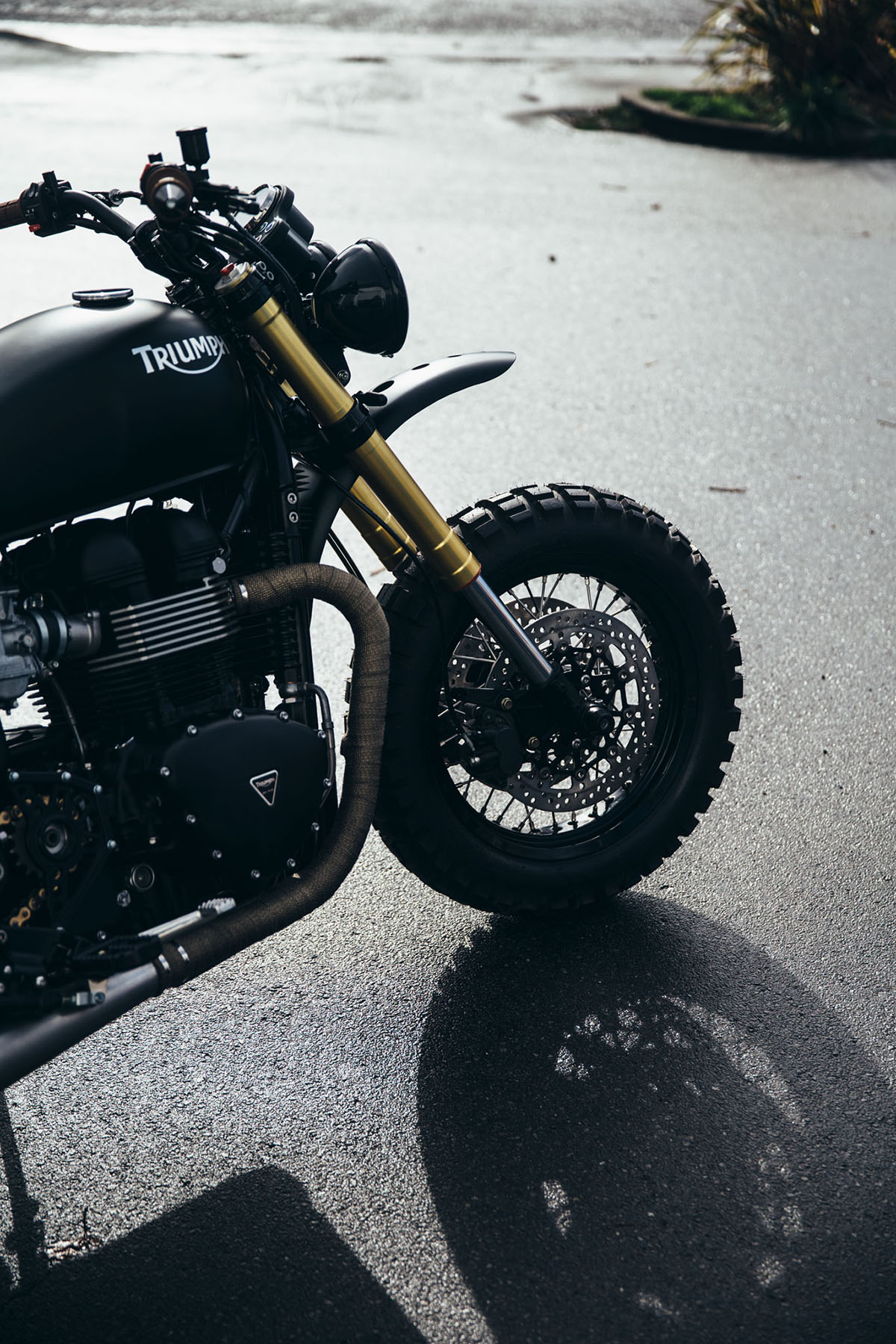