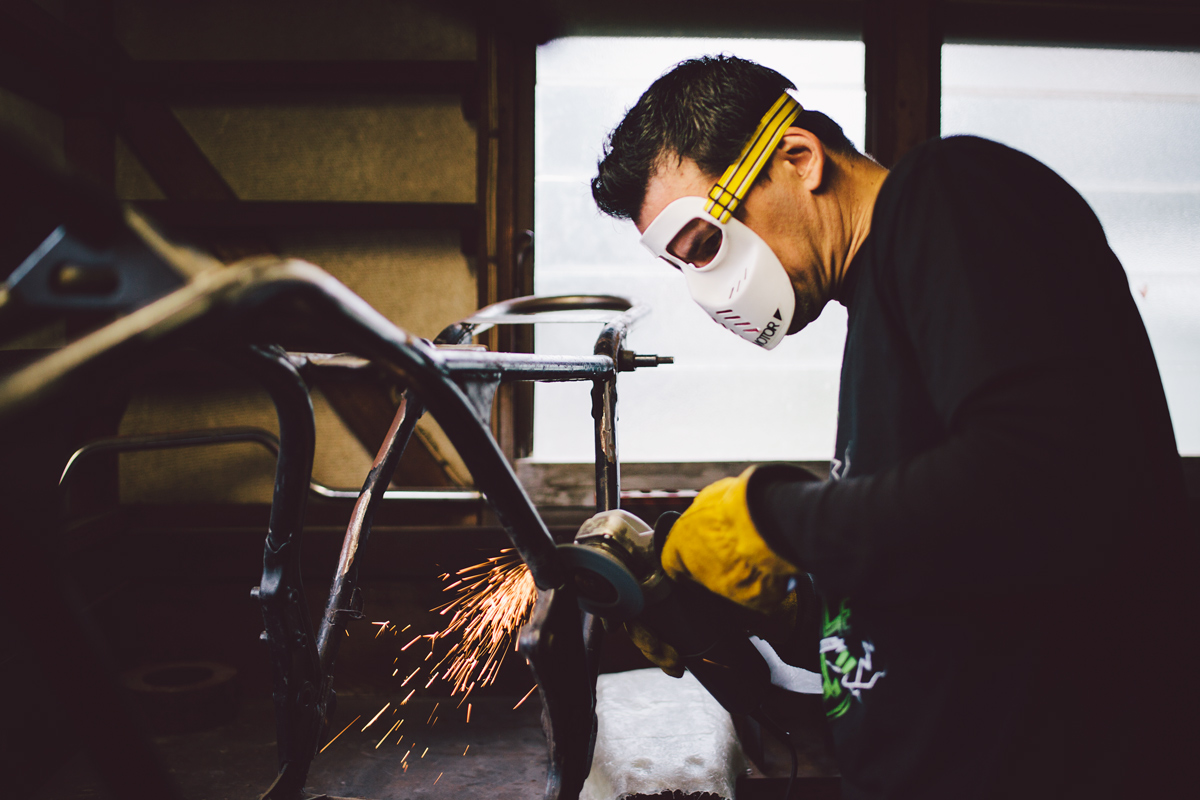 According to my brief google search, the Sami people of Northern Europe have over 1,000 words for Reindeer. This is relevant because I can’t find a word in English that properly describes the feeling of walking into the garage space of someone like Damon’s. Jealousy, excitement, intrigue, happiness, a bit of anger (why haven’t I gotten around to doing something like this?!) and of course of a bit of sexual stimulation (from the bikes, of course)

Damon’s had a bit of history with modified vehicles, having been a motoring journalist for car magazines since he was 20 years old. 8 years ago he made the conversion to bikes and hasn’t owned a modified car since. “I’ve found that bikes are not only more rewarding to modify but that I can own and build more than one at any given time. It doesn’t matter if your budget is $1500 or $15,000 – you can still build a unique custom bike that turns heads. Even more than one at a time! One day it’s a Jap-inspired brat, the next a hard-charging Flat Tracker, and the following I’m spannering on a Salt Racer” 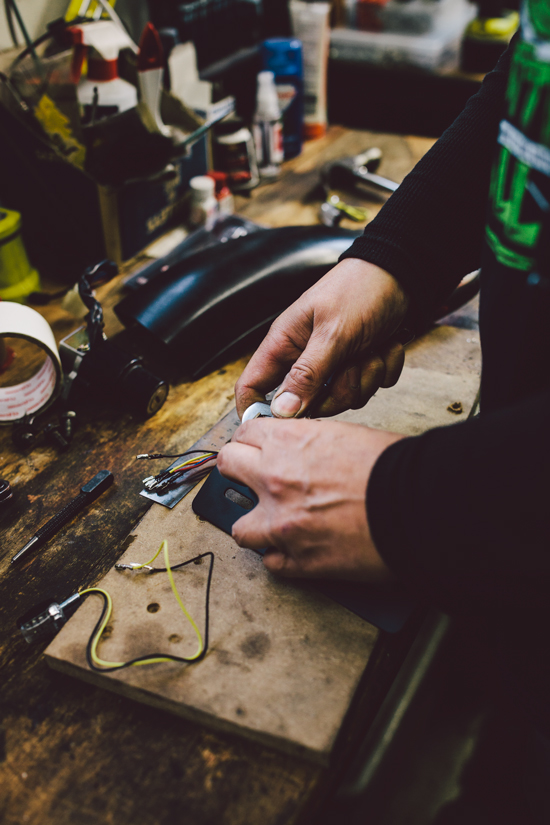 There have been two keys to fuelling Damon’s obsession; one is his closest mate Jayson McCauley who kicked off riding with him in ’06, and the other is Sydney Café Racers.

“While the SCR community and events are incredible motivators to build and ride bikes, it’s really the camaraderie between SCR members that really cements my love for this past time.

The beauty of this scene is that it allows such diversity and creativity with the bike styles. While we may find it hard to pigeonhole the bikes we build, it still always seems obvious to me which bikes ‘fit’ this scene and which ones simply don’t. Building one that does fit in but that also stands out is a bit of a fine art, however”

Looking at Damon’s space from afar you wouldn’t be blamed for assuming it was his own professional garage from home, and that he was a seasoned bike builder since the time of mullets and athlete’s that smoked. This is not the case however, having had no formal mechanical training, Damon has found that a few key tools and skills have unlocked the ability for him to build what he wants to see in a bike. 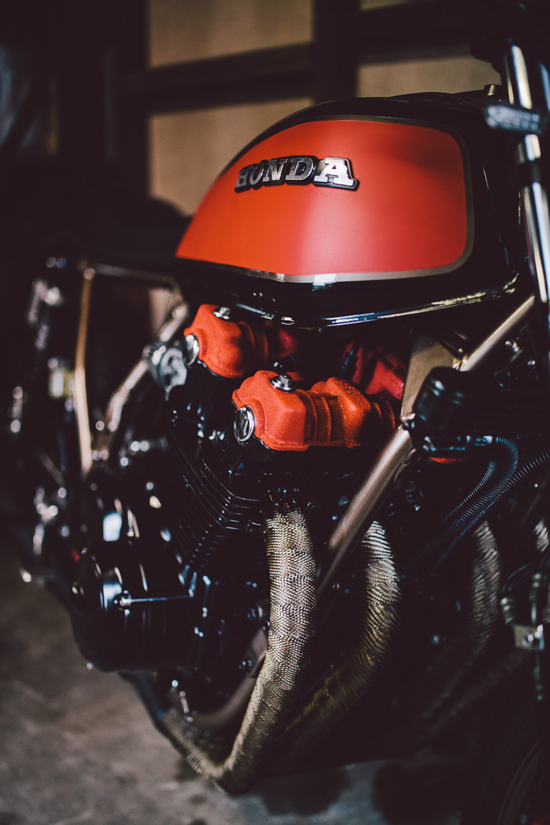 “You can farm out the tricky stuff like trimming and painting, but if you can muster up the courage to wield a cutting wheel, zap with a mig welder, lay down a bit of fibreglass, spray some rattle can, and solder a few wires – then that’s all you really need to know to build a sweet ride.”

But what if society was to suddenly go to shit, and in mere moments the Apocalypse was to strike? I asked Damon if he had to pick one bike, and one tool or item from his garage to take with him on the road in this new Mad Max style wasteland which would it be?

The beautiful Harley Davidson Sportster was his choice of wheels, and I admit I would have made the same choice. The rusted tank and metal on the bike suggests maybe it’s already seen the end of the world. And for the parts he’d grab? Gaffer tape and cable ties. 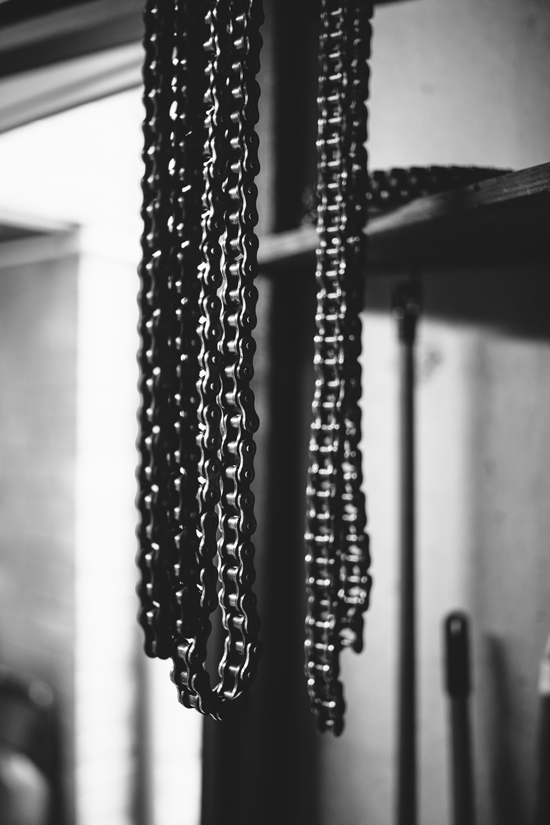 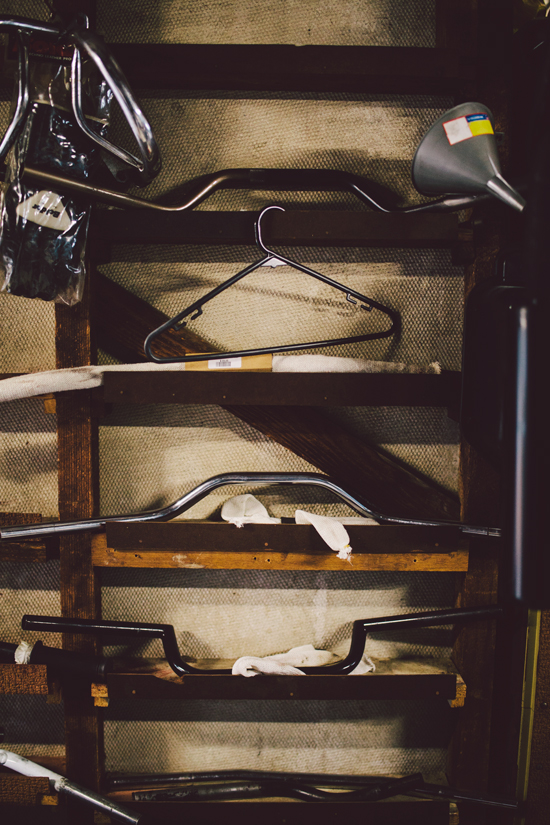 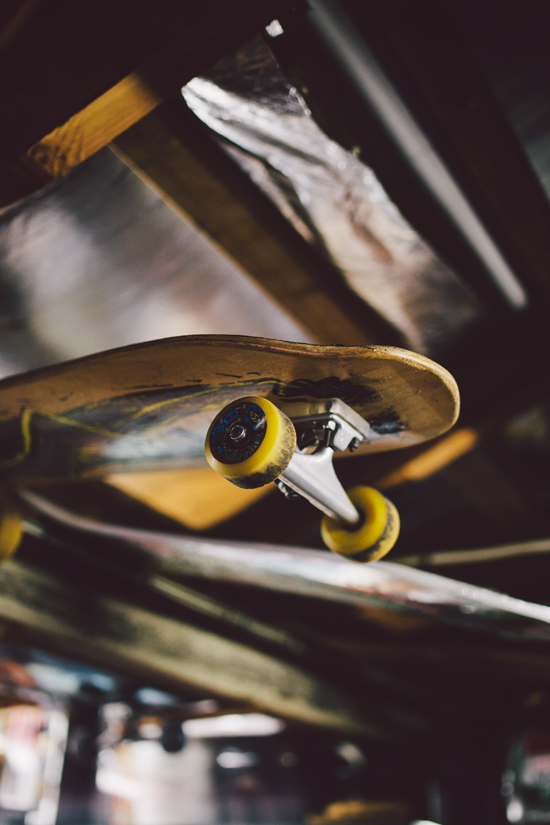 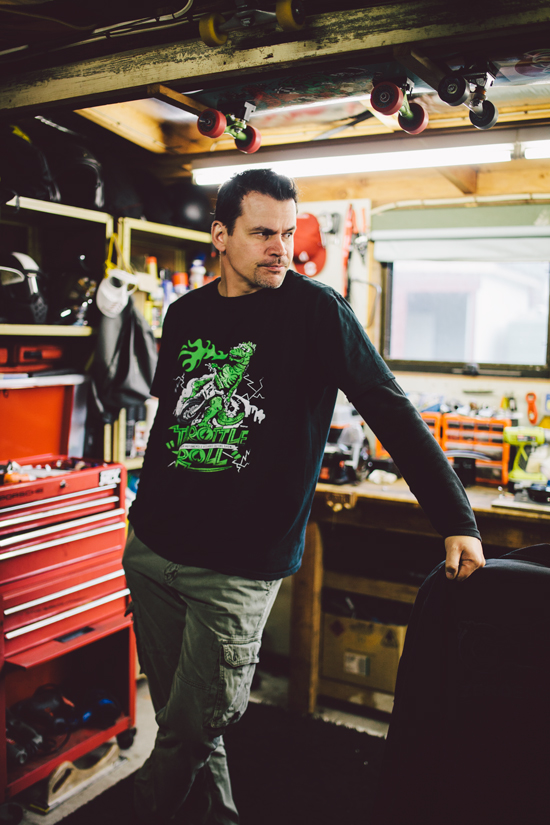 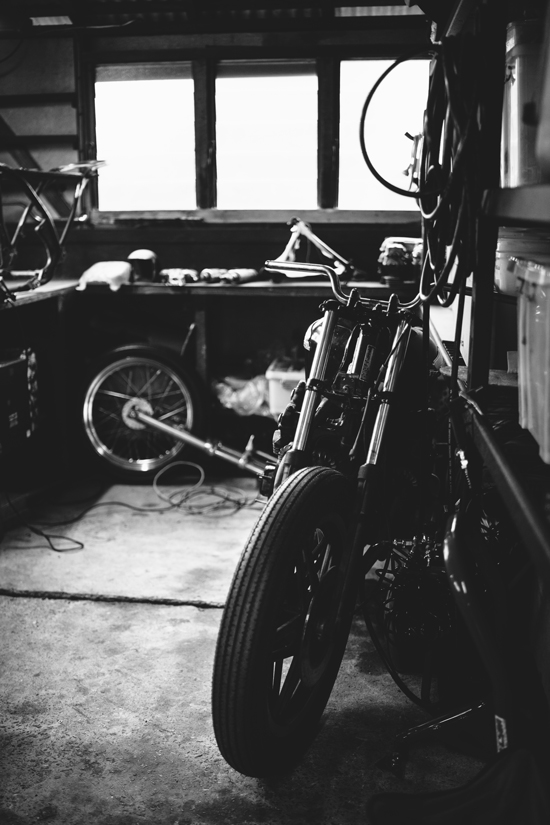 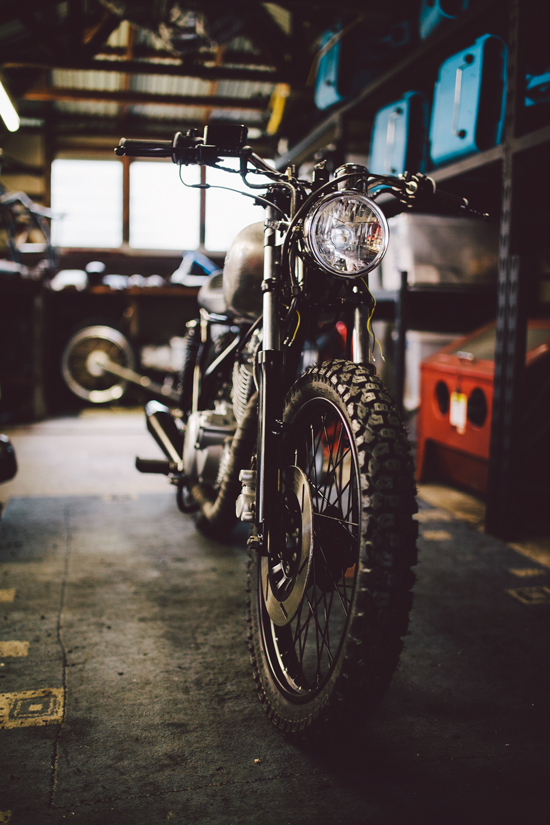 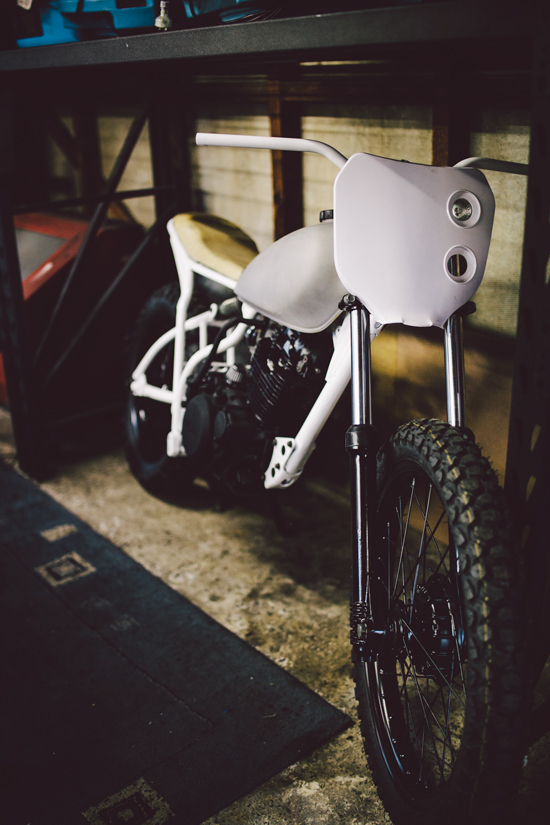 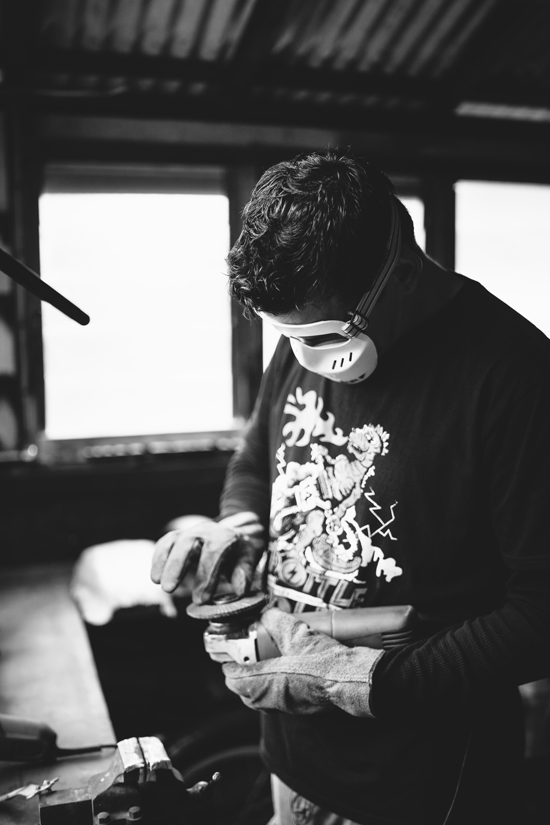 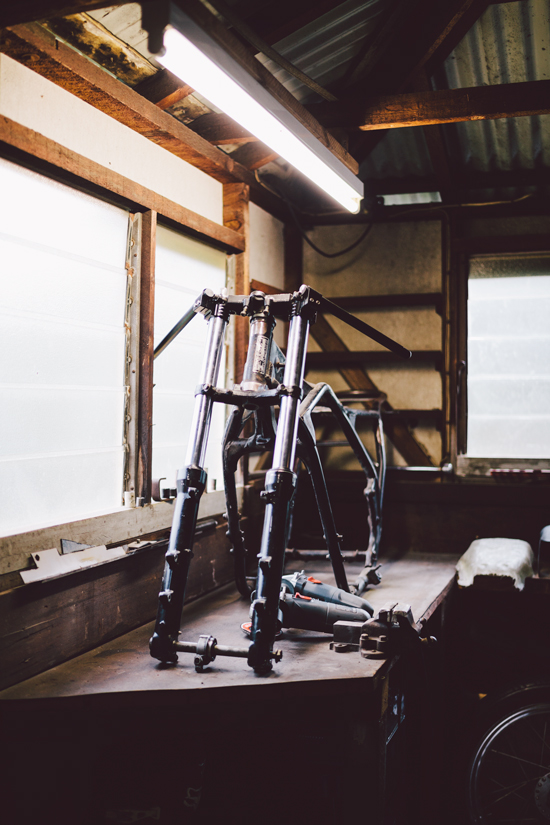 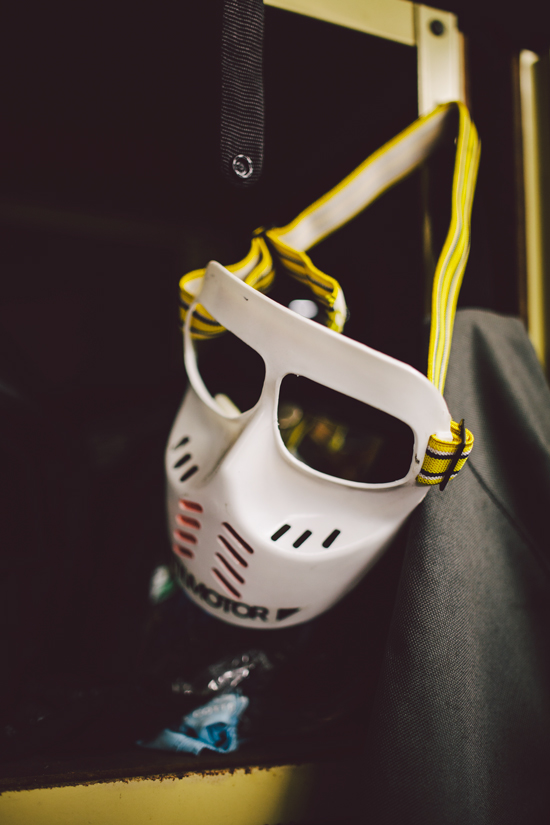 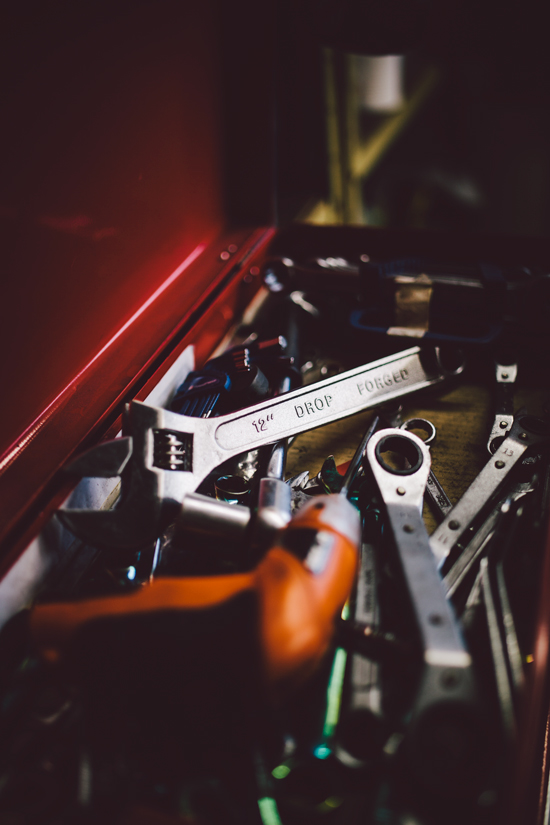 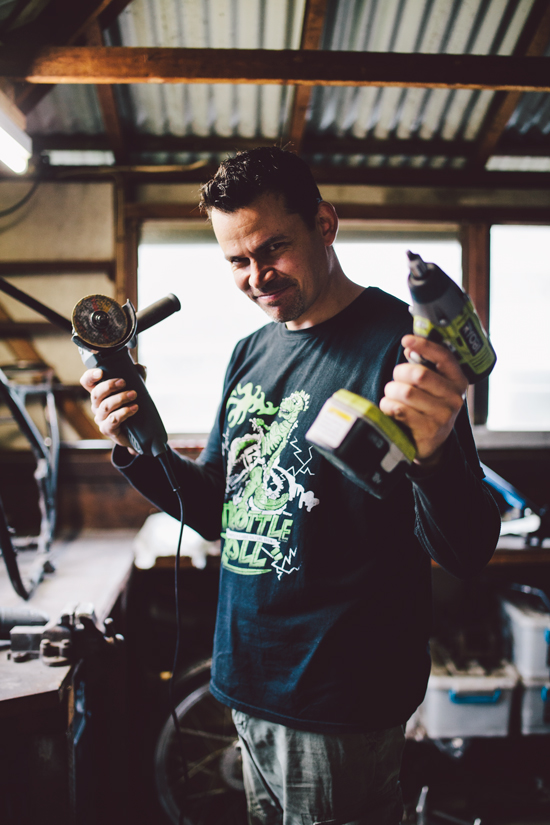