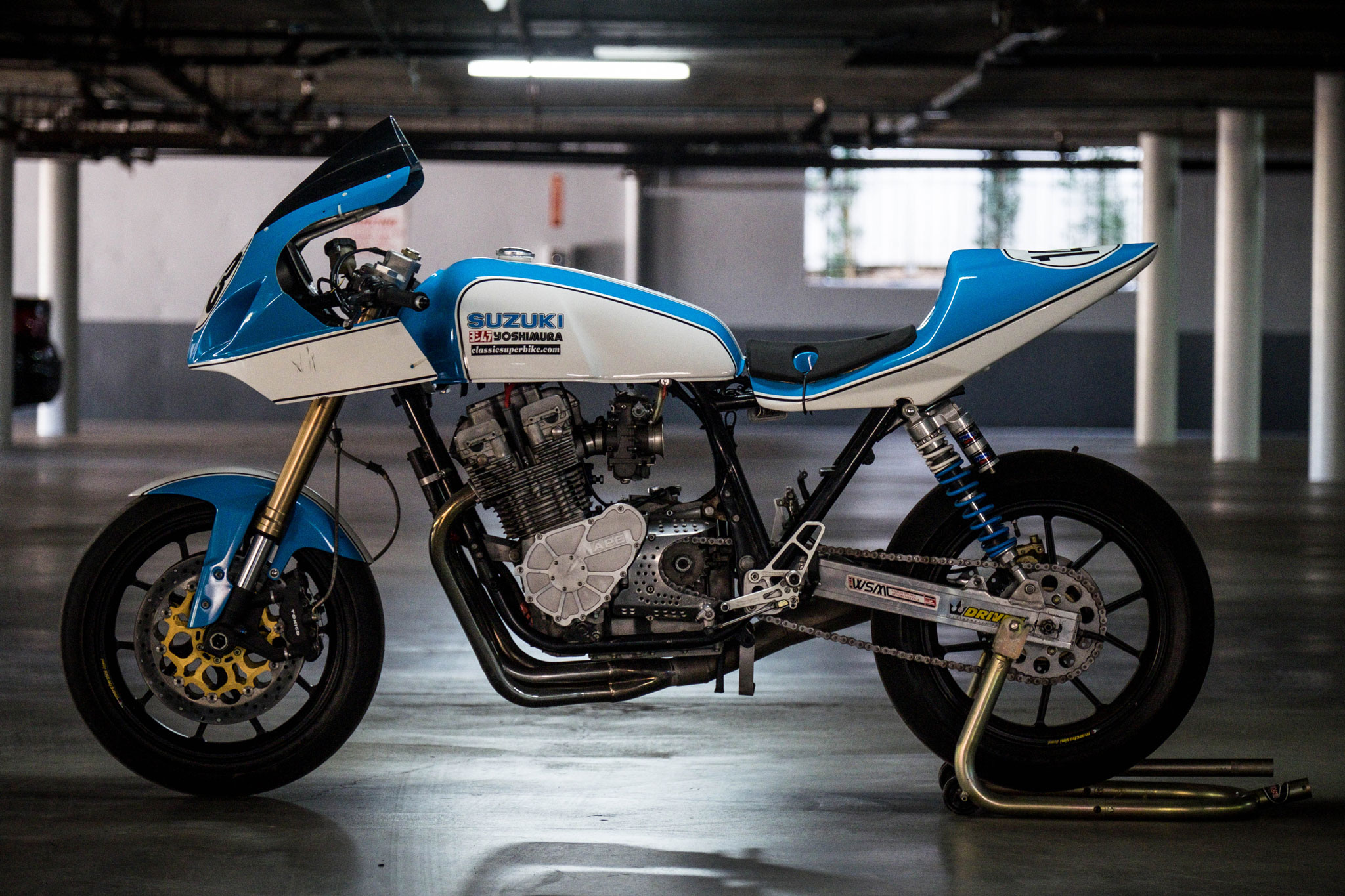 When you look at George your first thought might be “total surfer dude”. Contrary to this, he’s a die-hard motorcycle nut who has been racing most of his life. For the past decade, he has been a regular at Willow Springs International Raceway, taking out the title of vintage heavyweight champ in 2006. We got wind that George had a Suzuki GS1100EX with a story behind, so we had to go check it out. 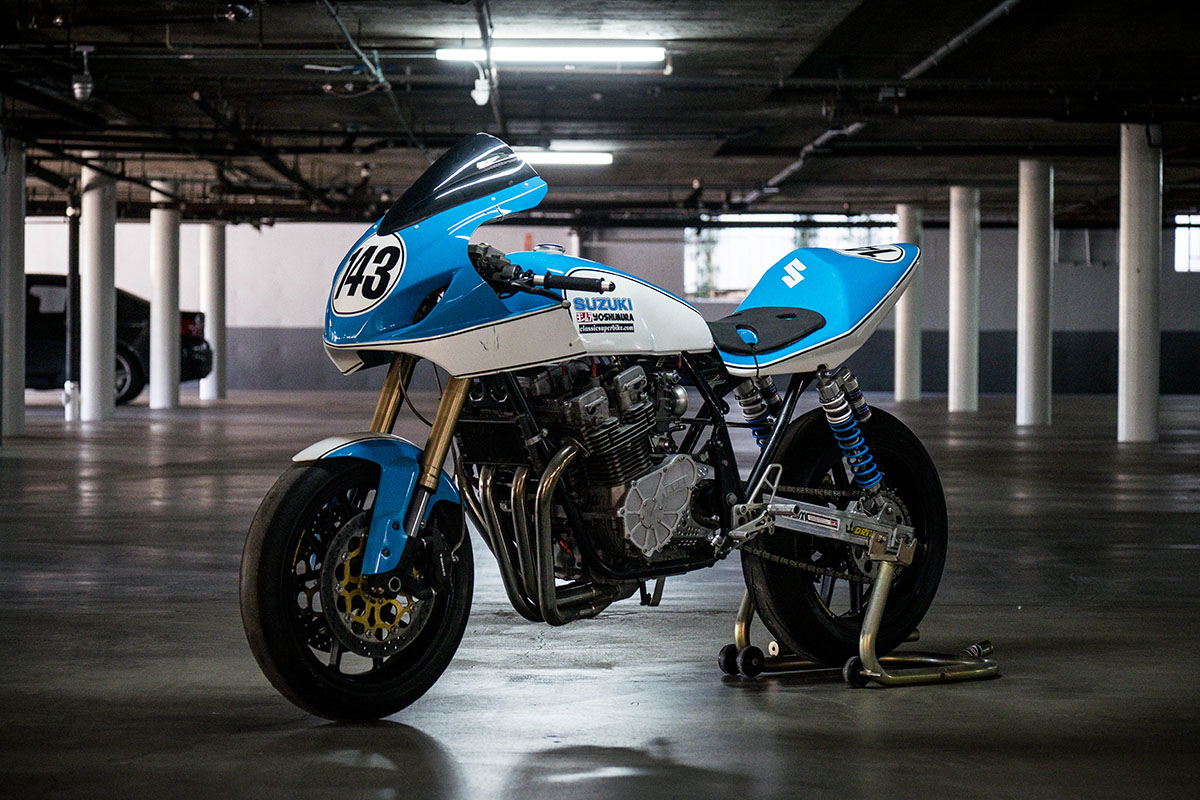 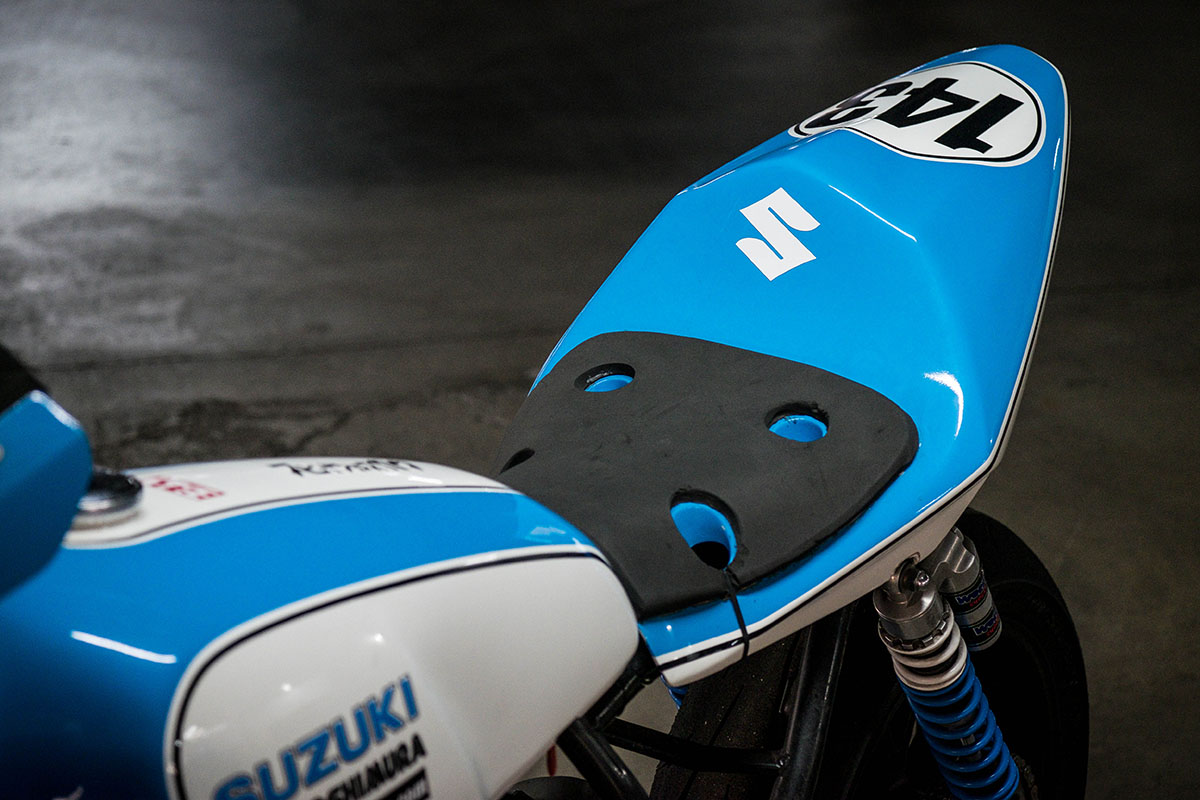 “My father and I rode motorcycles all my life. It’s something we both bonded over and engaged in for years. It all began as an 8 year old kid, my father took me to a race track in Bridgehampton, NY to see the races. I was immediately drawn to them. The sounds and smells, it was like nothing I had ever experienced. I was addicted, it was like a drug. In 1973, my father then bought 2 Kawasaki Z1’s for himself and a Honda QA 50 for me. The day he brought the big bikes home, my sister cried saying that I got everything and she got nothing! From that day forward I never looked back.” 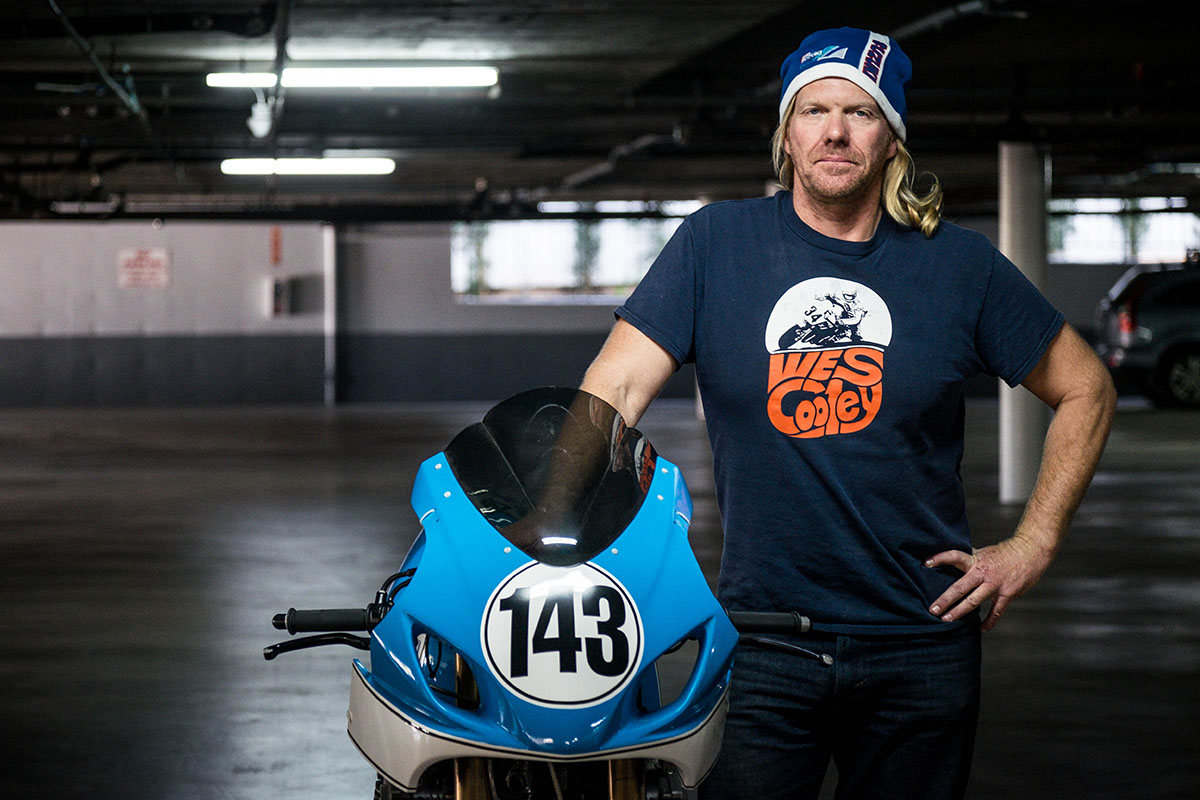 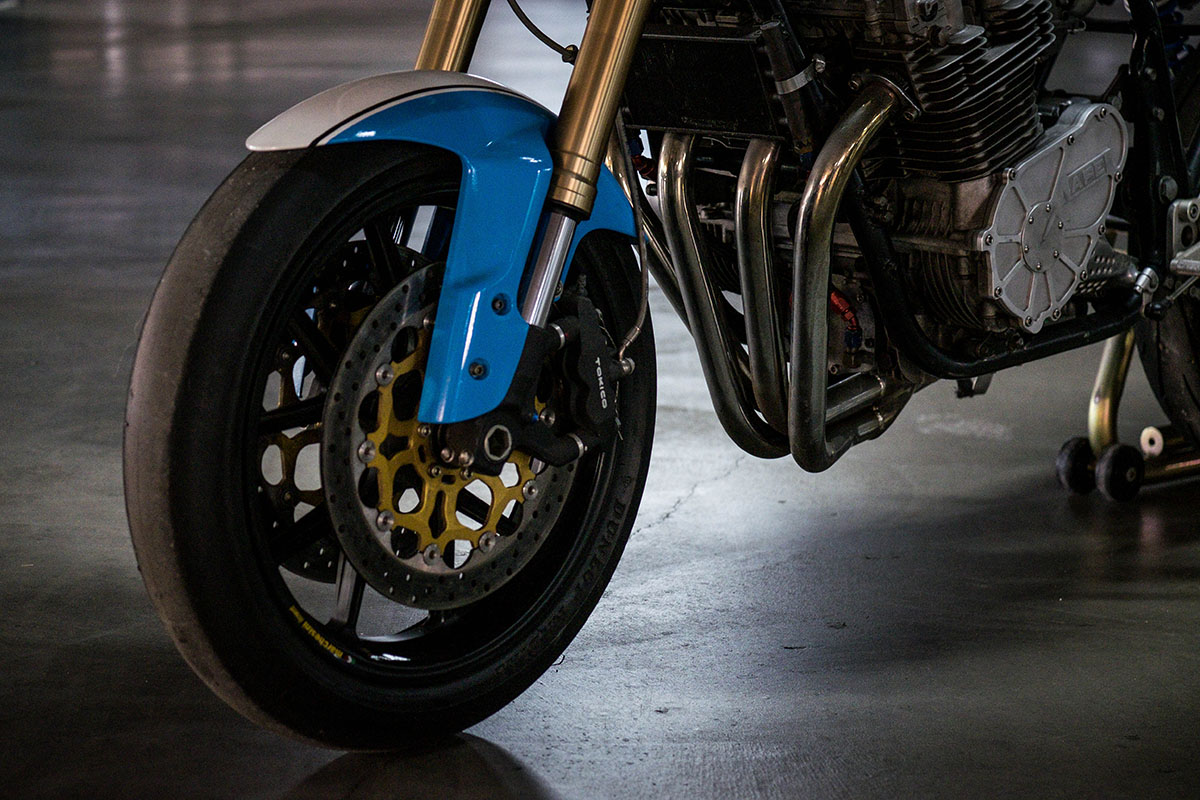 Throughout the years George has owned many bikes but this Suzuki GS1100EX holds a special place in George’s heart. Back in 1980, his father built a turbo charged Honda CBX and it was in need of constant repair.  That same year he bought this 1981 Suzuki GS1100EX while the Honda was in the shop. Like any motorcyclist that owns a bike for a little while, the desire to make it better came to the surface. The GS found it’s way into the shop. His father added a big bore kit, cams, racing carbs, dymag wheels, cal fab swing arm and more. The bike became a rocketship. In college, George became the guardian of the GS when his father became preoccupied with other life issues.

Passed on from father to son, this 1981 Suzuki GS1100EX was bought brand new and has known no other owners for almost 37 years. 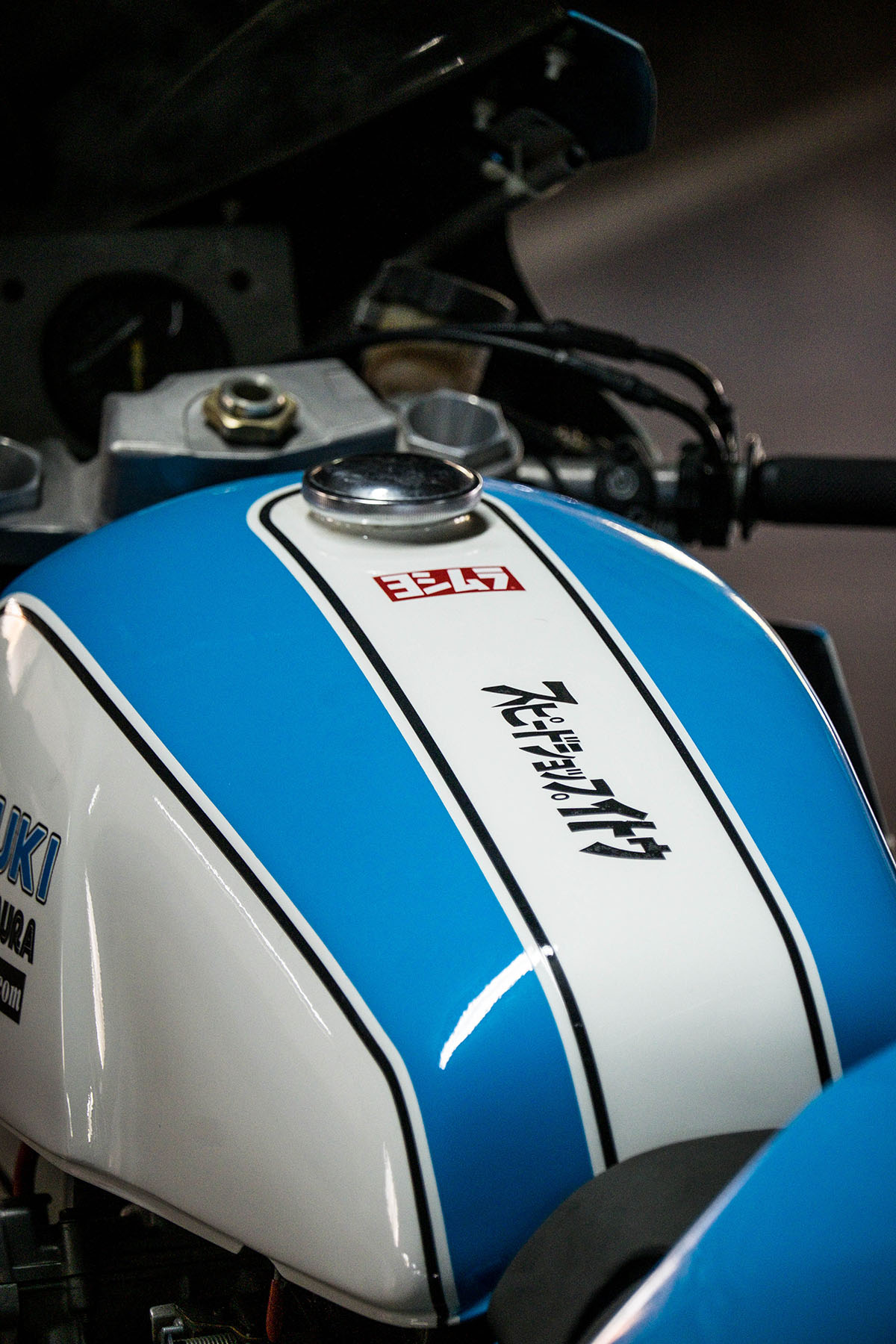 To own a motorcycle with such a personal history makes one ultra connected with a machine. As George suits up to ride, he talked about how this bike makes him feel. He remarks that it’s the raw power, the sound, and connection to the analogue creates a unique connection. “It’s not something you really experience with a modern bike, there is so much about this bike that is pure,” George remarks. As far as handling, the GS1100EX is remarkably stable at high speed. It’s a planted machine. George employs a steering dampener which helps but he enjoys the raw feeling of the bike. 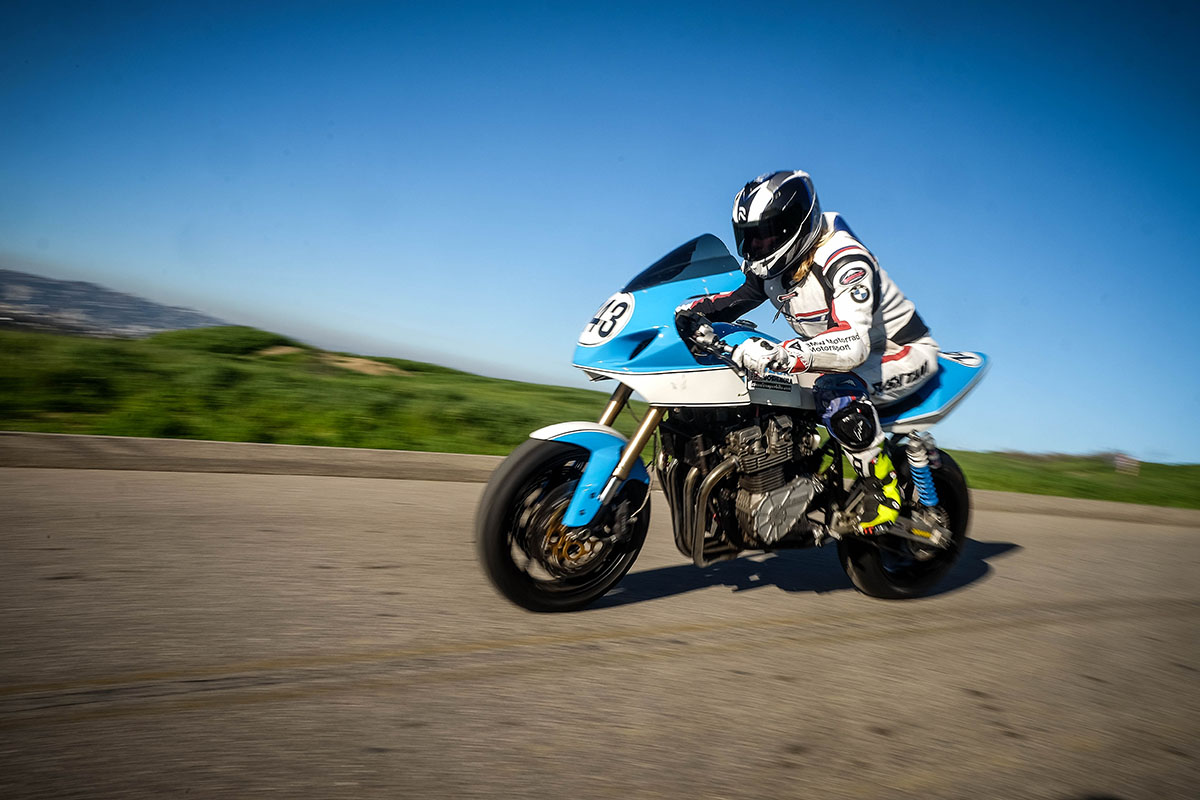 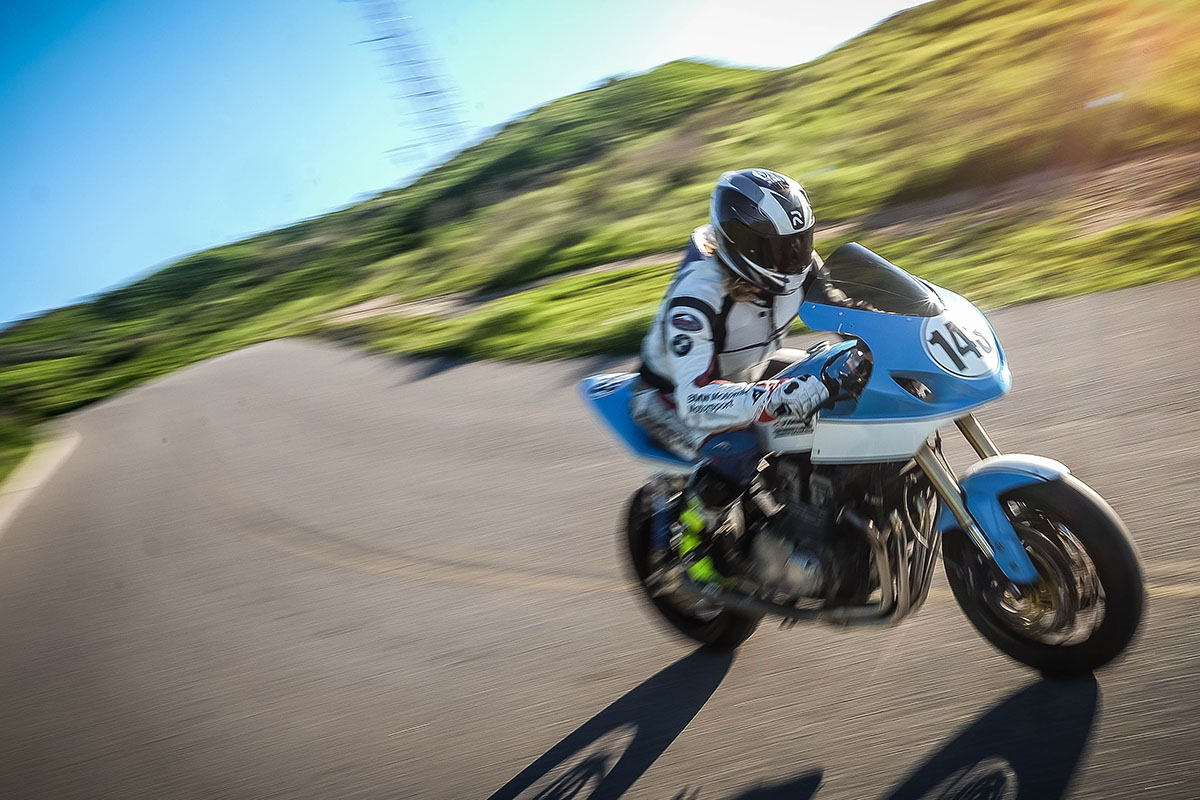 For a motorcycle that has gone everywhere with George, he jokes, “I’ll likely be buried with it.” When he returned to LA in 2002, the bike had sat idle and needed some professional love so in stepped friend, famed crew chief and engine builder, Carry Andrew, to bring it back to tip-top shape. After she was breathing again, George’s friend and fellow vintage racer, Ed Milich of EPM Engineering helped George modify and mount the modern front end from a 2007 Suzuki GSX-750 and also put on a swingarm from a 1987 GSX-750.  His buddy and fellow racer Rick Carmody did the Wes Cooley paint scheme. “The bike has always been a collaborative effort and I always try to seek out the best guys to help me. To date, there are so many people that have helped make this bike into what it is”  George laughs and says, “Man, so many people have touched this bike in one way or another.” 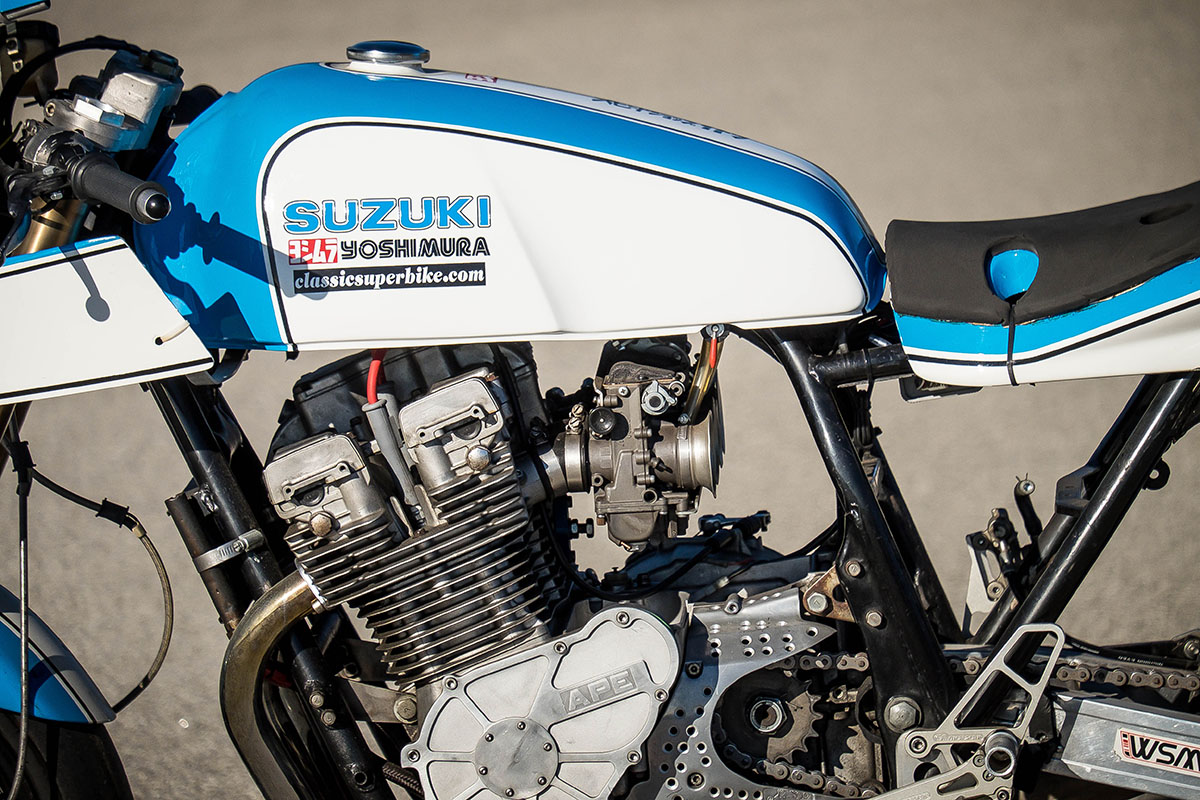 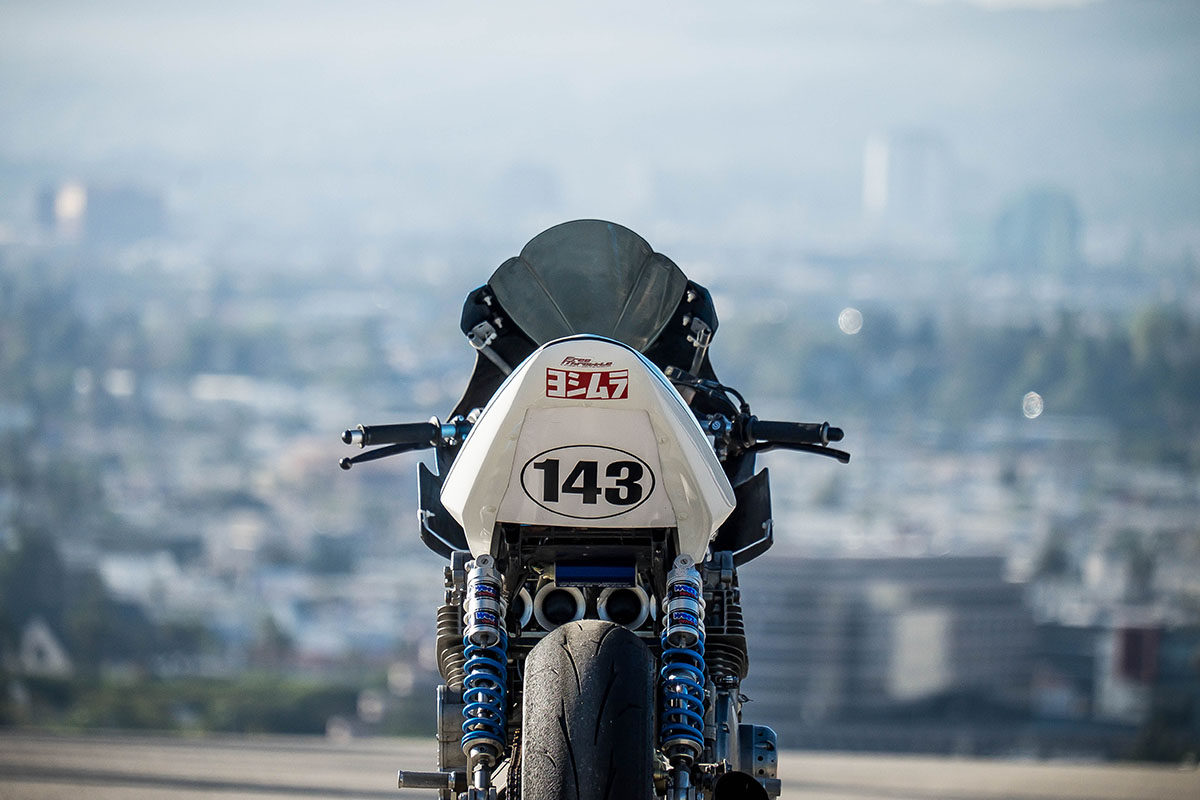 George’s Suzuki GS1100EX is an amazing machine that harmoniously blends the allure of classic motorcycling with accents of modernity.

On top of his obsession for riding bikes, George runs a boutique motorcycle rental and tourism business out of Santa Monica, CA. His goal is simple: To expose new and continuing riders from all over the world with a bike and access to the most amazing roads in southern California. His fleet is stocked with a handful of sport bikes and a set of adventure bikes being added to the fleet in 2017. You can learn more about his business and the experience at MotoCalifornia.com 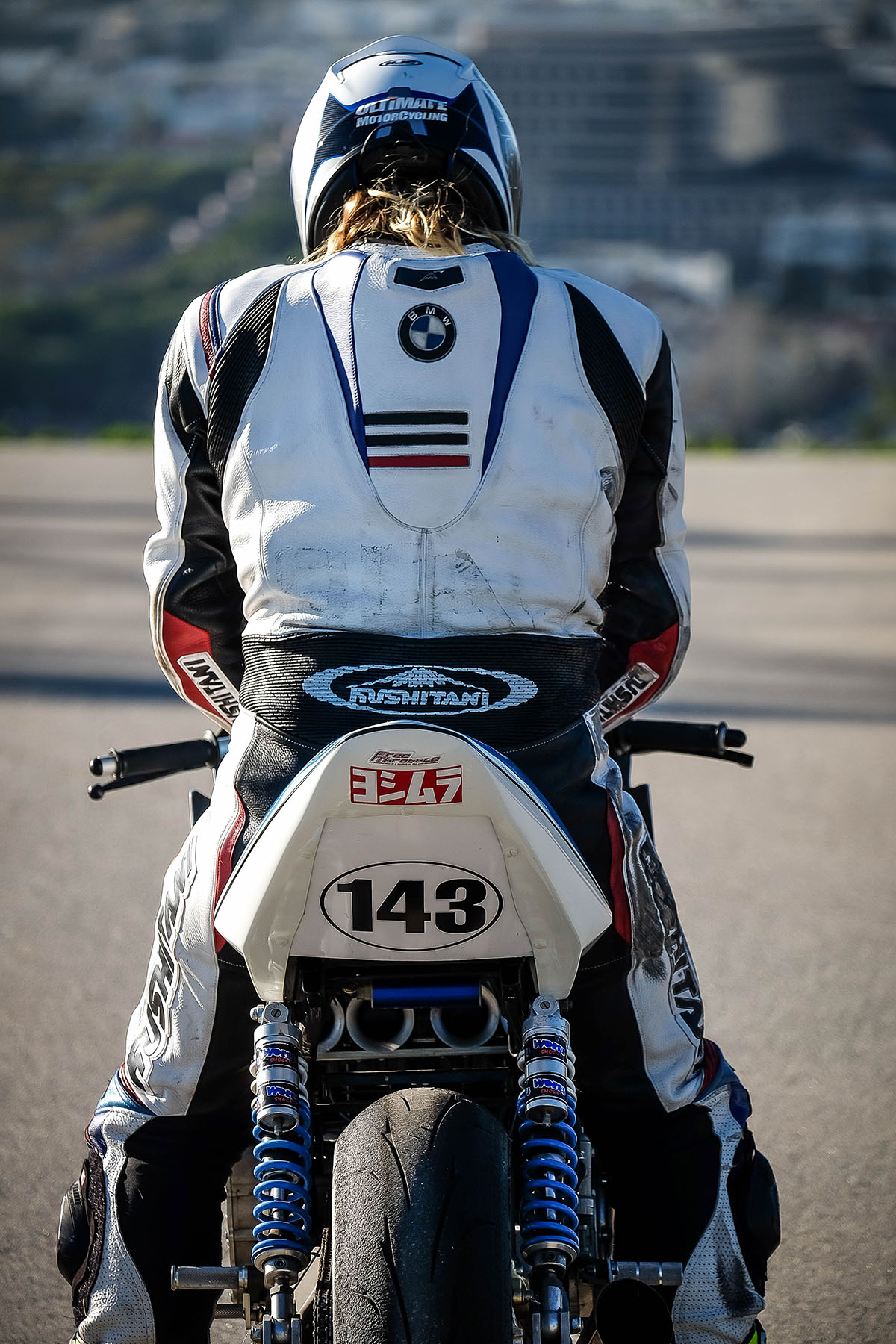 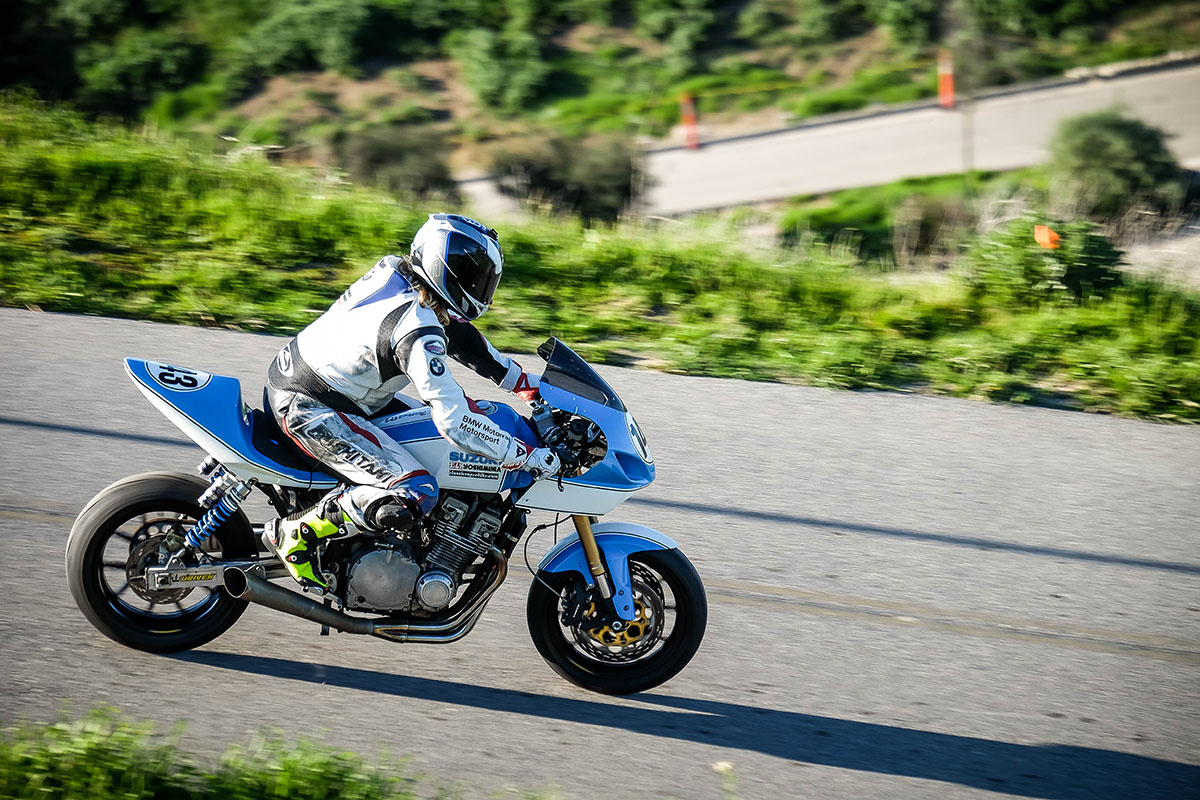 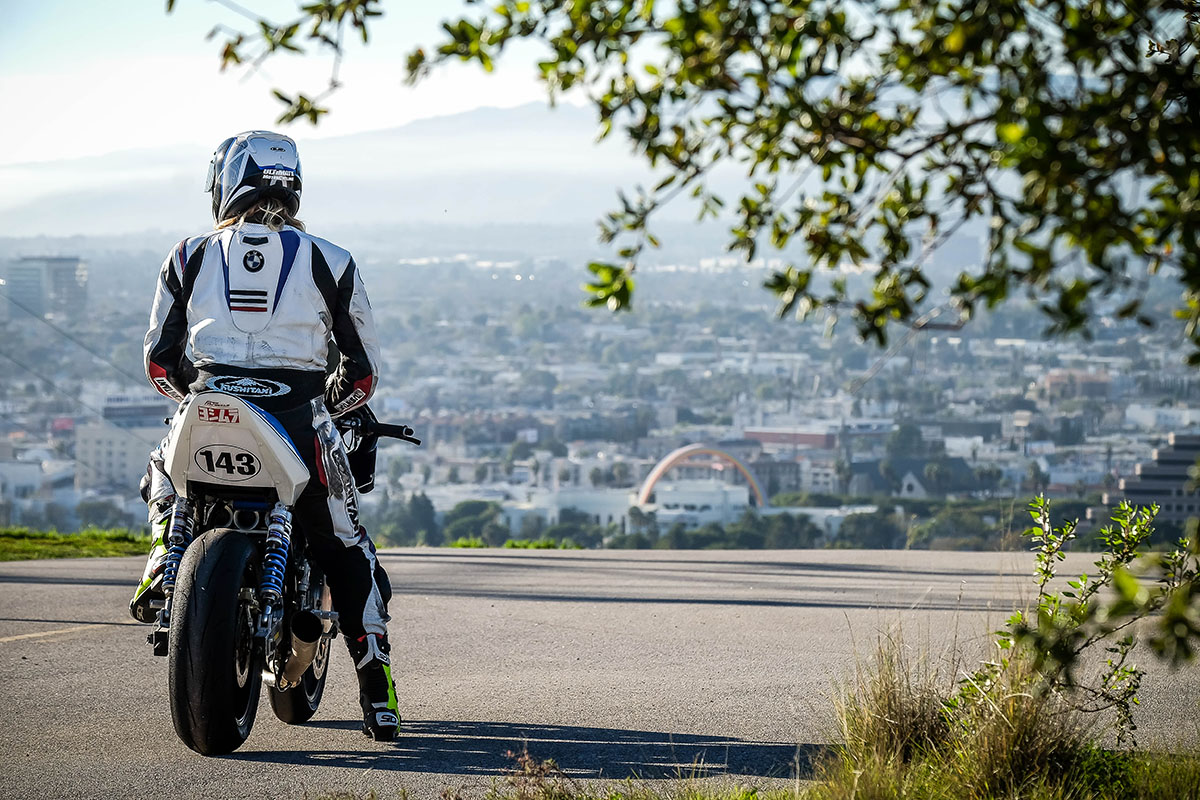