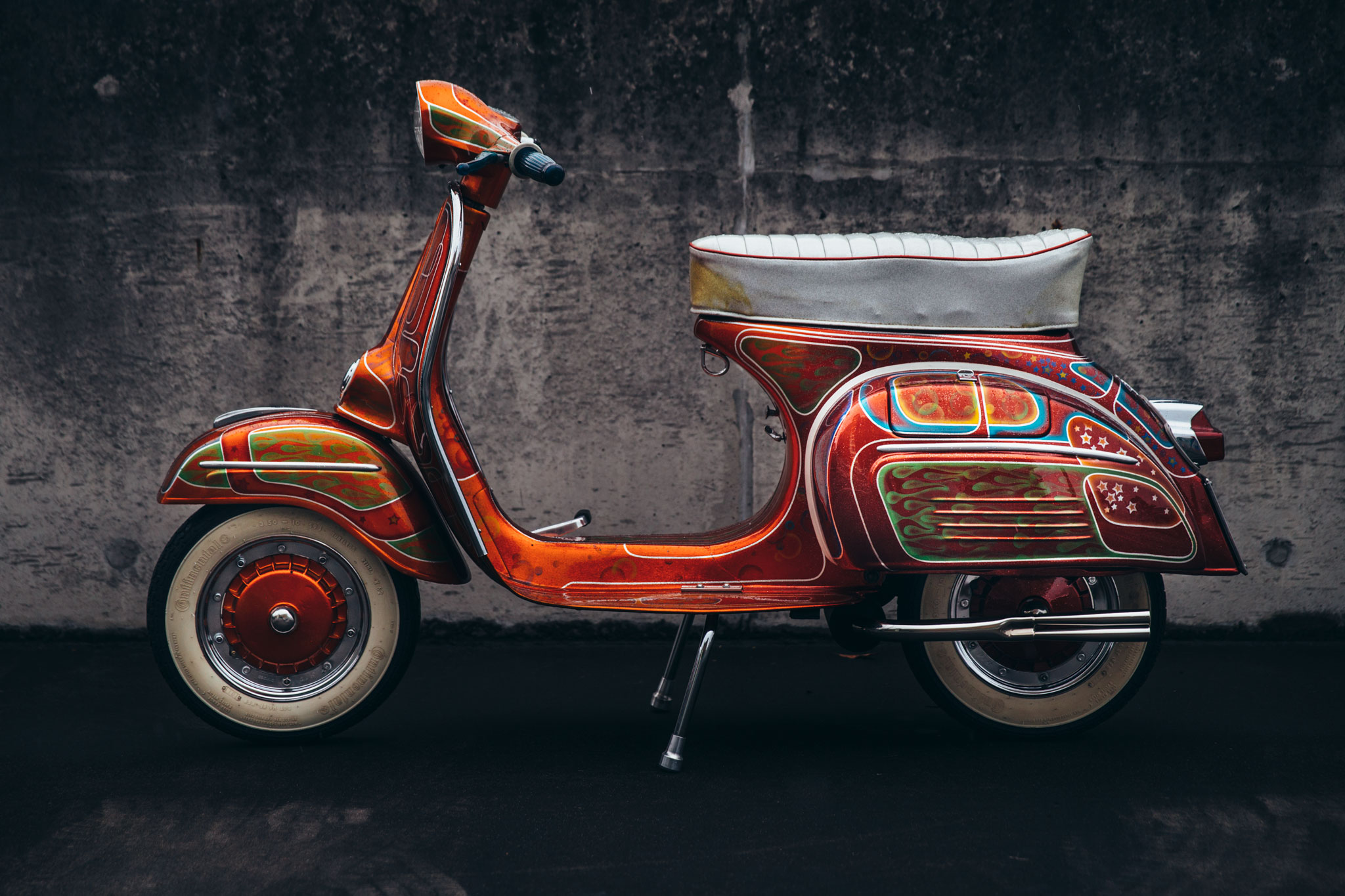 Take a trip on Glitz, a hyper-psychedelic scoot from 1969 that cuts through the gloom while leaving behind a magical colour haze. 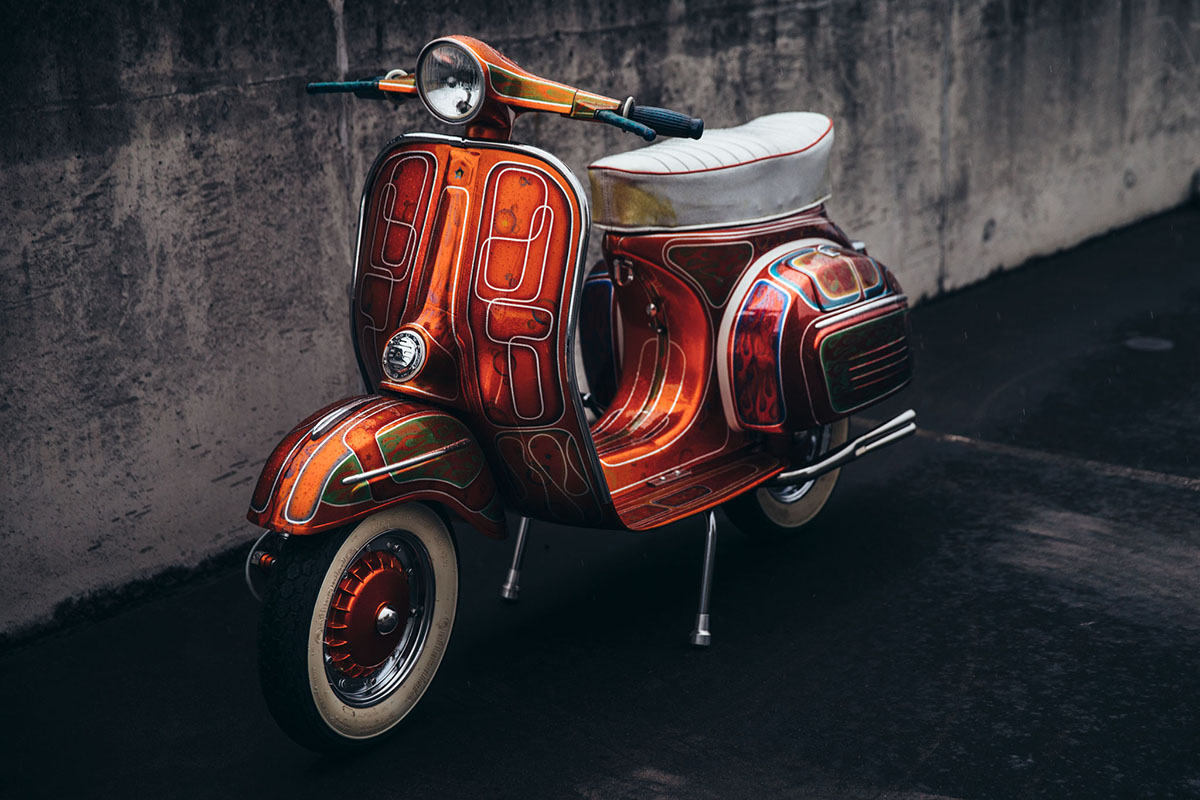 Classic Scooters are something of a passion for Fleur, a woman who is as colourful and wonderful as this super-sparkled 1969 Vespa 150 Super that she zips across the grey concrete on. The mod gods planted the seed for scoots in her soul back in the 1980’s, as a young teenage Fleur would happen upon a photograph that her father had taken on a camping trip in the ‘50’s. This image of adventure, with luggage to last the apocalypse festooned about these little machines, sparked a passion upon Fleur. “It was then that I declared that I wanted a scooter. My parents were only too happy to oblige, and I received my first scooter for my 16th birthday. It was a 1961 Vespa VNB 125 that had seen better days, but I loved it all the same! I still have that scooter and restored it in 2009. It maxes out at about 48kph but it’s so small on its 8 inch wheels you feel like you’re flying!” 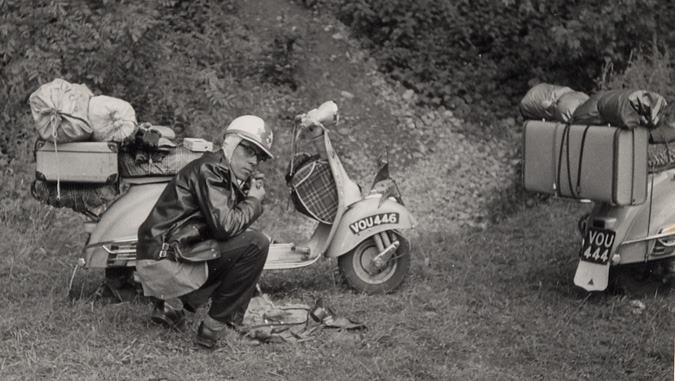 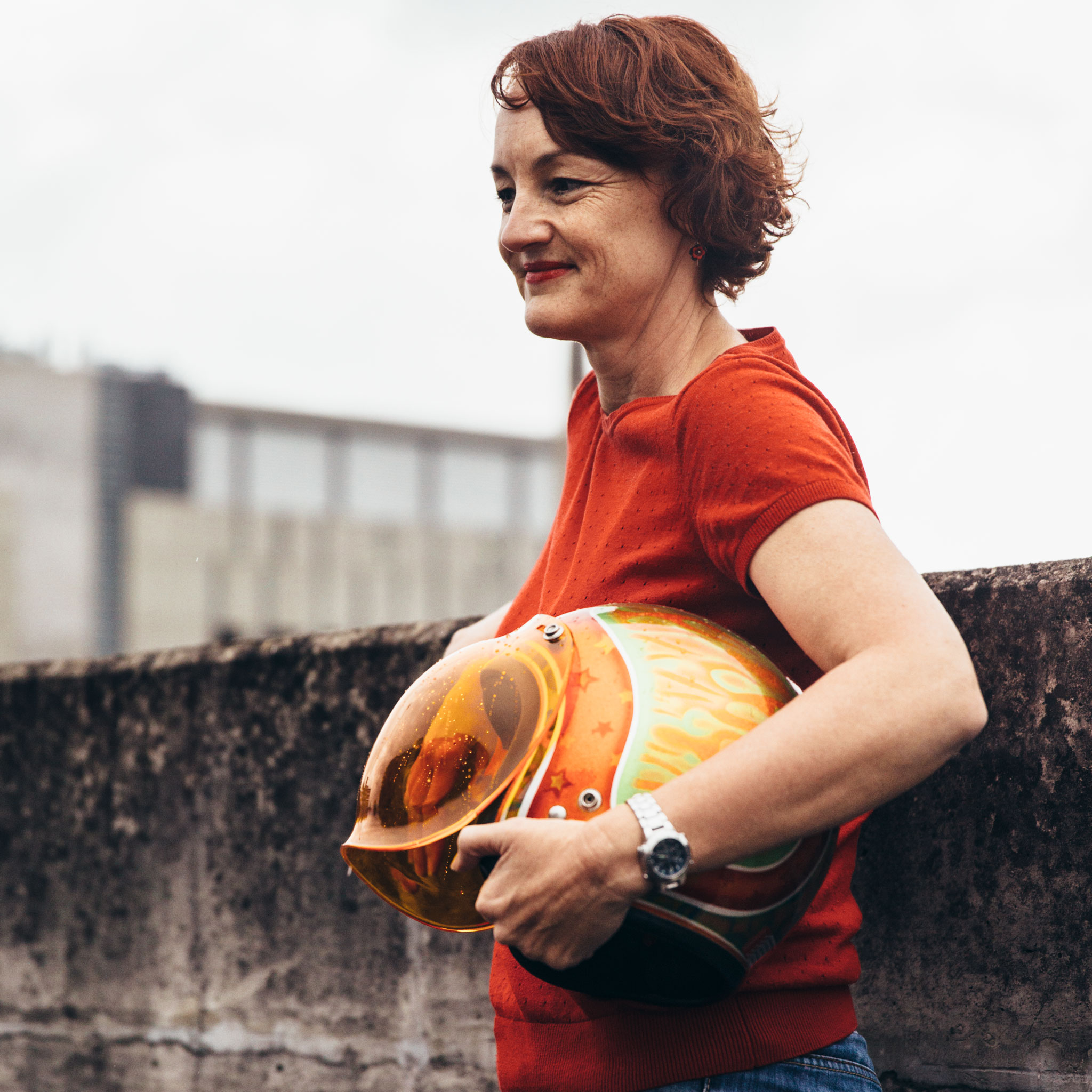 It would be after this restoration in 2009 that Fleur decided to grab herself another machine. “My ’61 Vespa VNB 125 was now is such pristine condition that I didn’t want to let it out of my sight! It was only good for riding to cafes and watching people admire it. This meant that I didn’t have a classic scooter to get about on, so picking up a more common classic such as this 150 Super filled the void. They’re probably the most common models in Australia, as Aus Post used them in the ‘60’s and ‘70’s. I picked the scooter up and it was completely rubbish. It had lived its life in SE Asia, and the front end had a mysterious wobble that was terrifying. We tried to eliminate the death wobble by a process of elimination that ultimately saw the entire front end being replaced. Oh, and the engine kept seizing…” 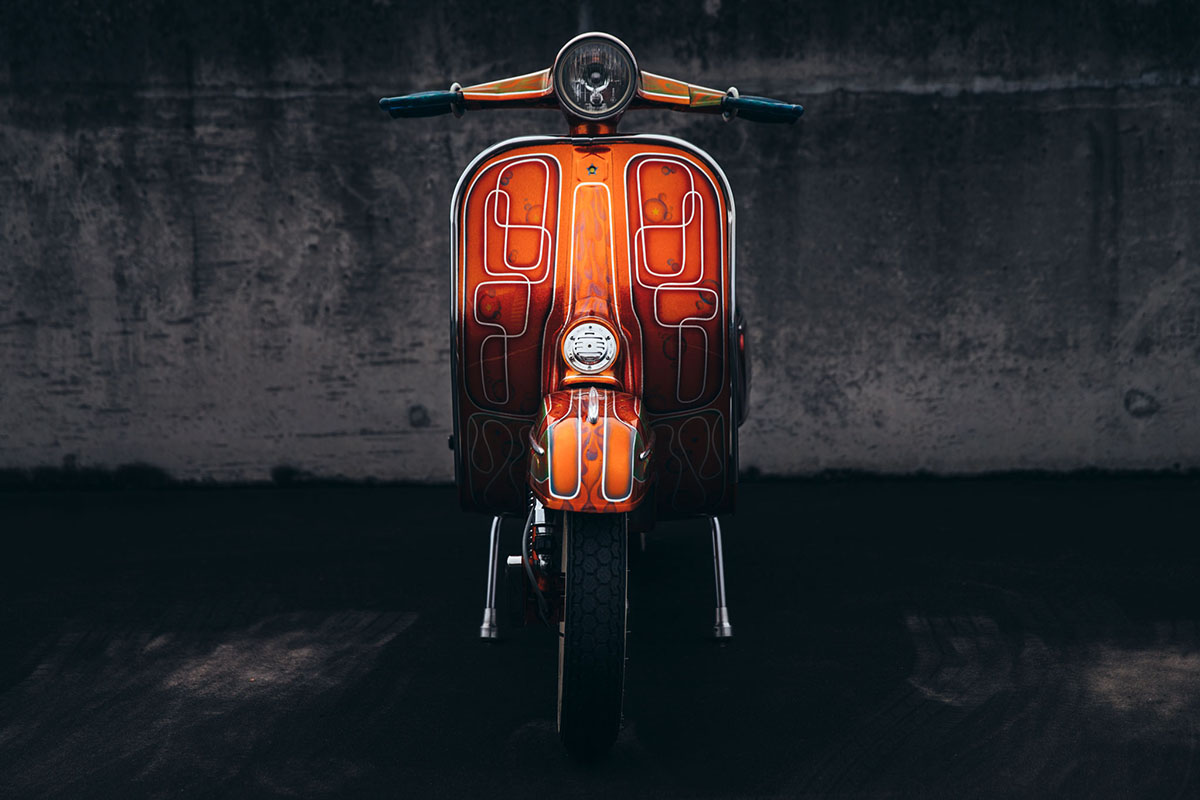 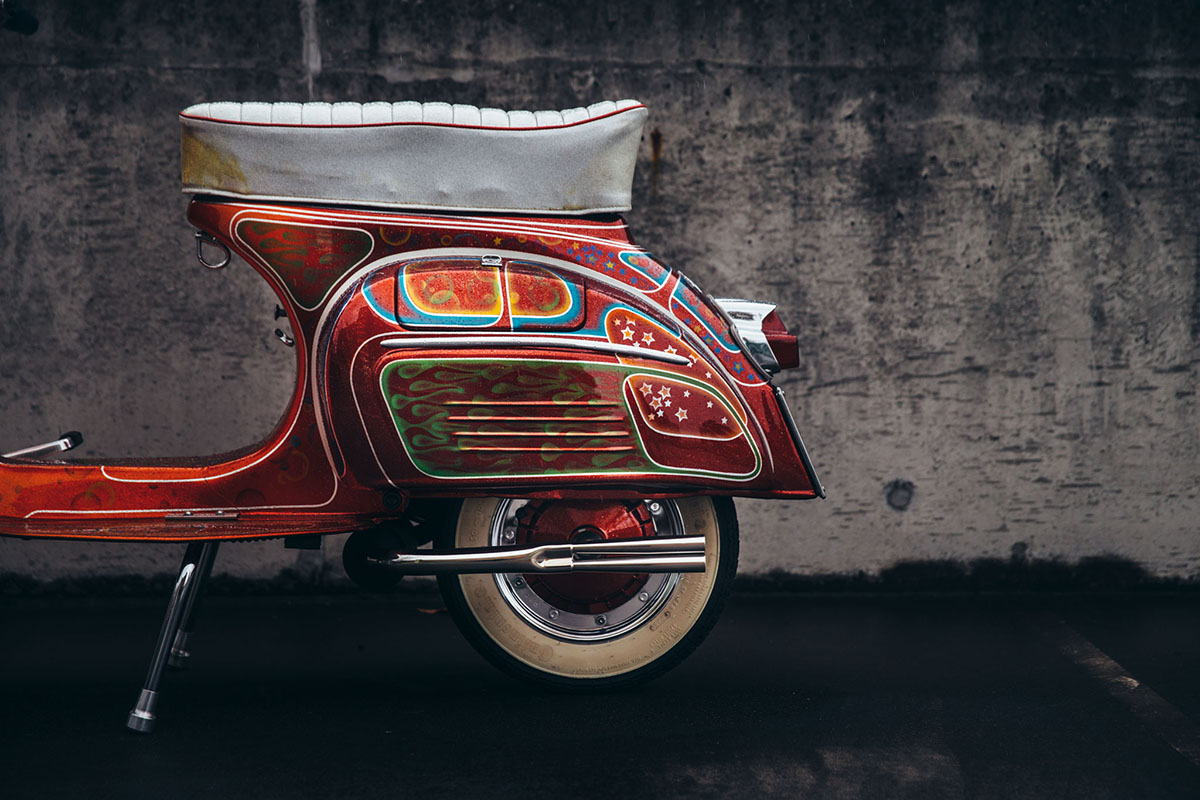 In the process to get ‘Glitz’ on the road, she was fitted with a 12v Vespatronic (as opposed to the 6v candle power of the original points system), a Pinasco 177cc performance kit and a sports exhaust. “ There was a definite performance improvement – now she does 100kph easy compared to an asthmatic 70kph flat out.” 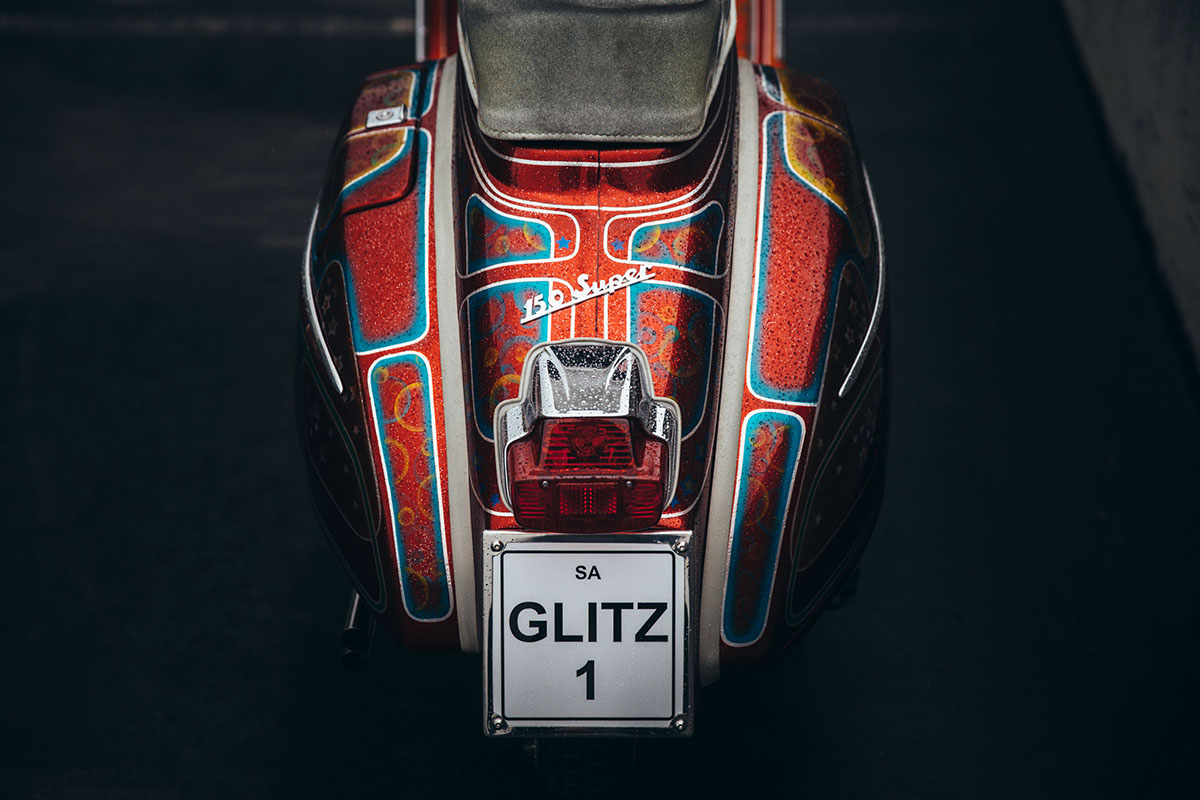 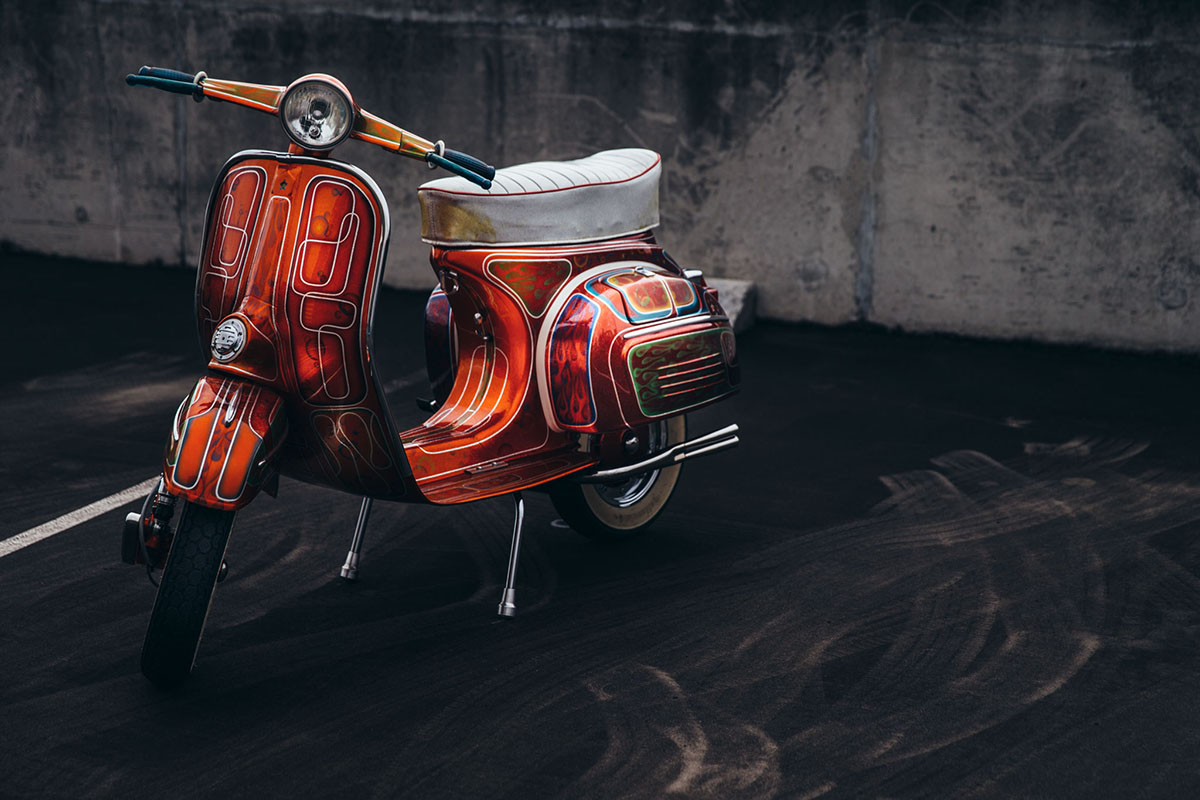 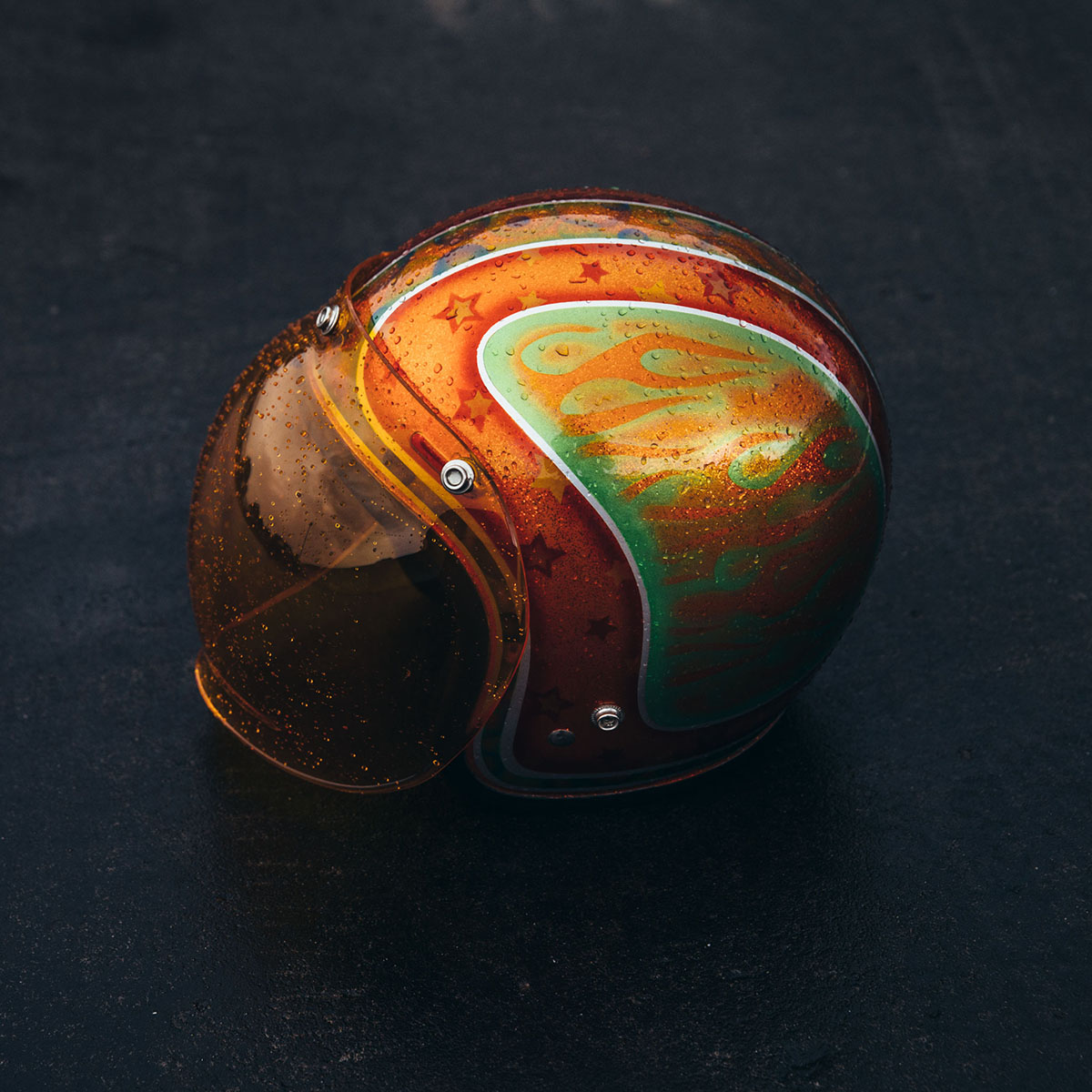 This would be no easy task getting the every day rider up to spec. The list of issues seemed to grow, but passion and determination would not falter. The once troubled machine would now be roadworthy, but was it worthy of joining the stable of other unique classic scooters that Fleur and her partner shared? “While I decided what to do with the scooter it became my daily rider over the Sydney Harbour Brudge to work. It was so m,uch fun to ride that I couldn’t part with it; I couldn’t leave it looking like it did (an obvious SE Asia resto) but it wasn’t worth of a complete restoration to its original appearance either. So it actually became a folly, with me declaring “right, it’s going to be covered in glitter and lime green flames!”

And so what it was. 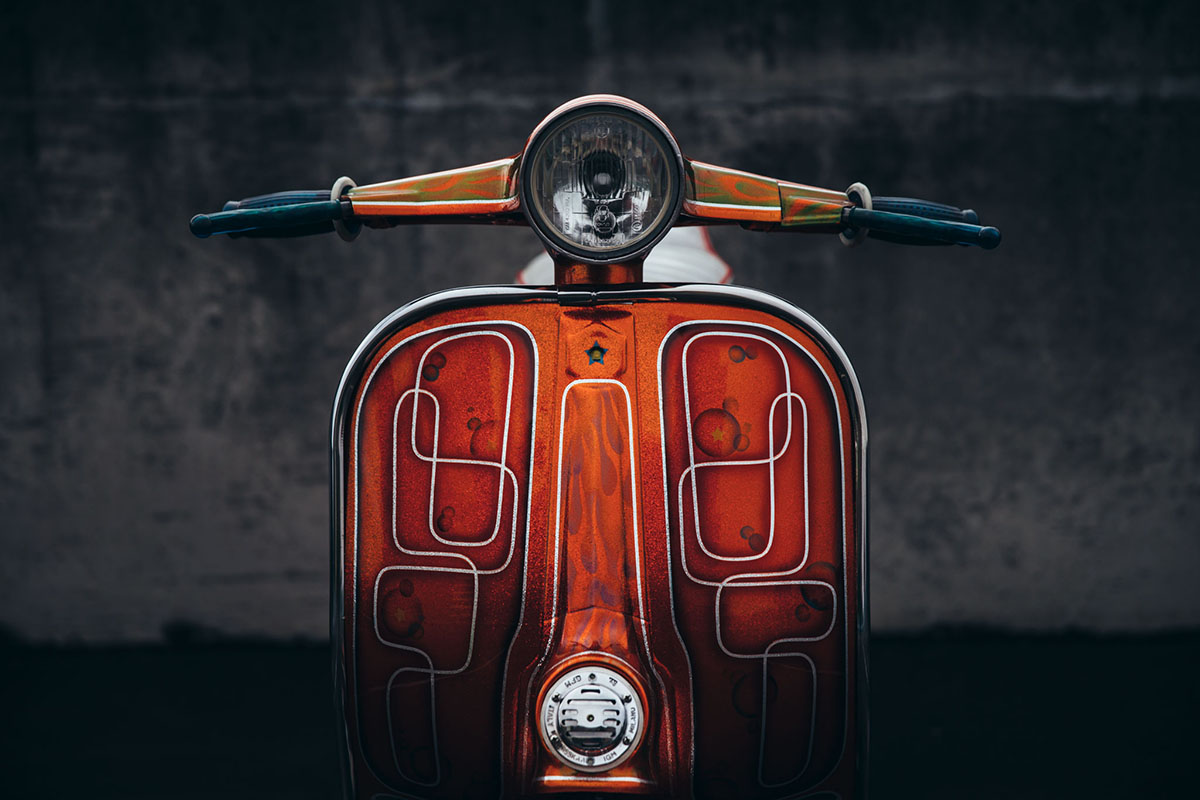 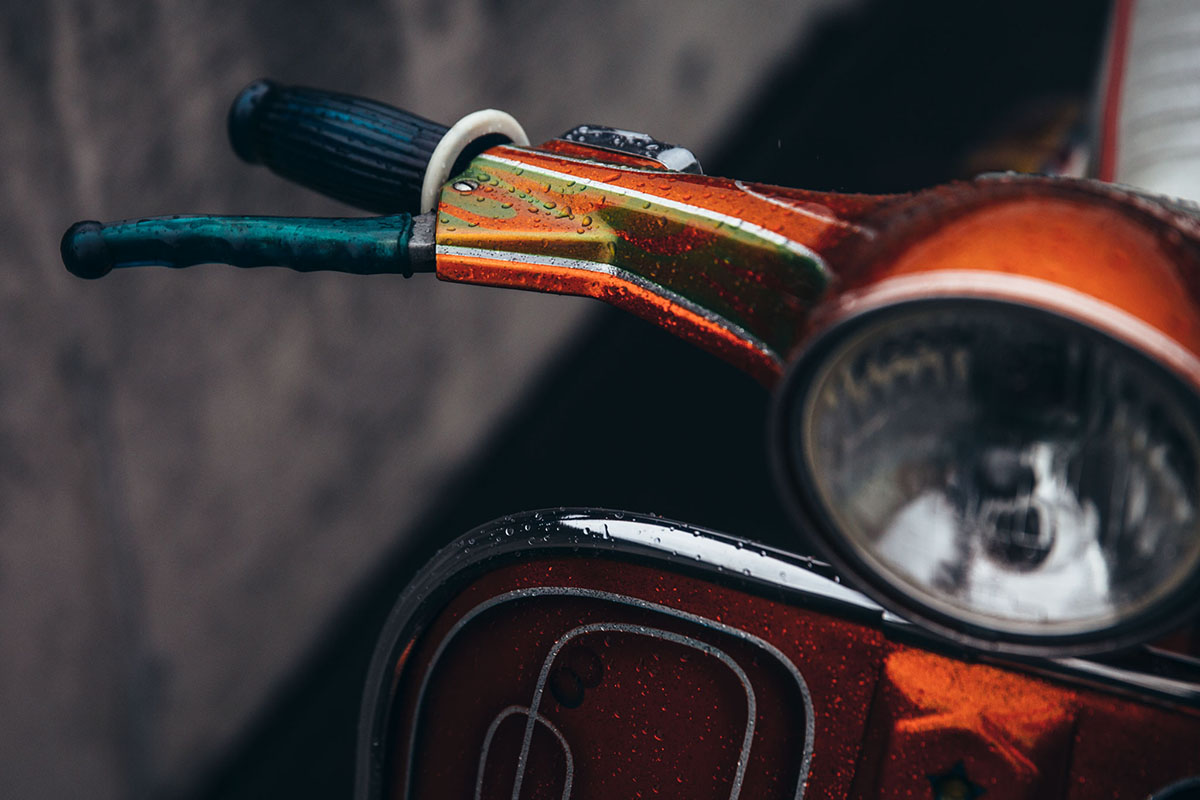 Now would be the time for the scooter to receive a mammoth dose of personality. Who better than Kyle from Smith Concepts for the task? You may remember his work from such articles as El Lujo, The Forever Bike, or just about any great paint job you’ve seen on the streets to be honest. “The timing couldn’t have been better. Just as I was looking at glitter hotrod paint jobs on the Internet, Sandy at SS Scooter Engineering showed me a helmet he’d bought off Kyle. It was funny, when we dropped the bike off as he was working on a Harley tank and guards that were only black and skulls, quite the opposite to what I wanted. So here he was handed a little old scooter with only the guidelines “no black, no skulls, happy colours, lots of glitter, lime green flames, stars, bubbles, and fun. Kyle was great to work with, and very patient with me considering my ideas were forming as he painted.” 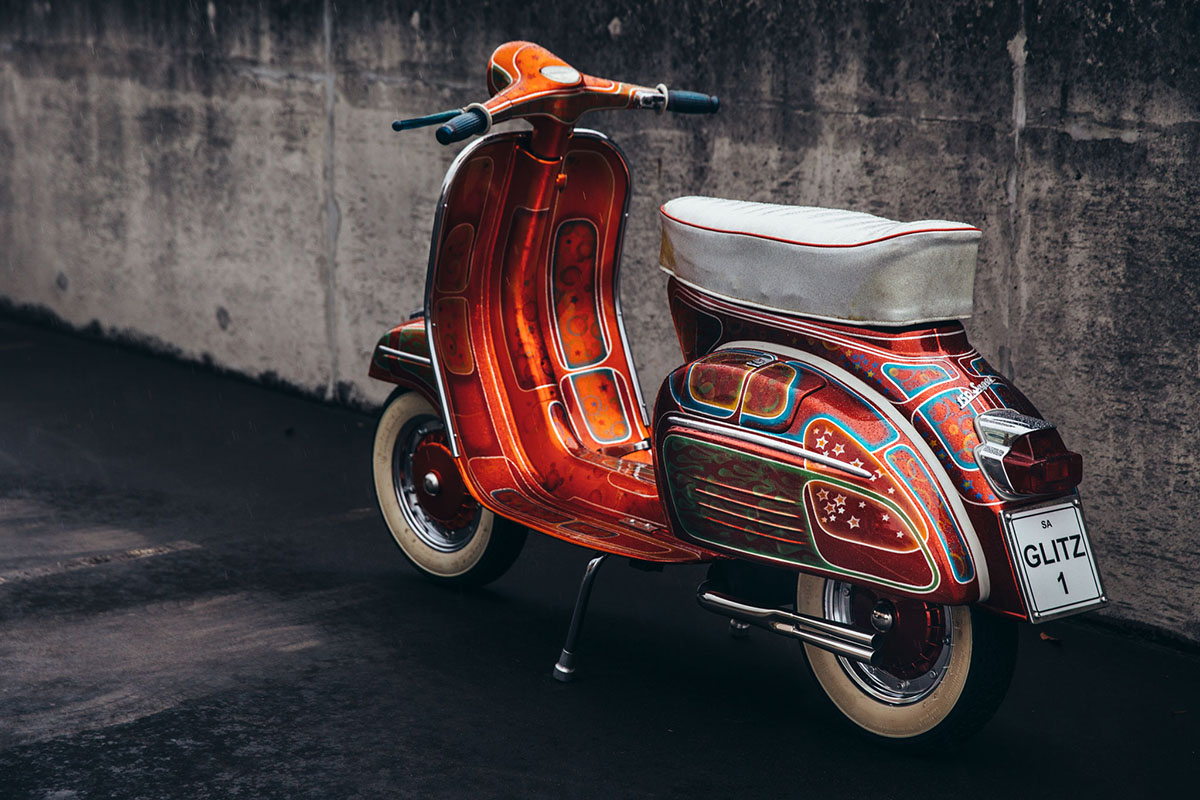 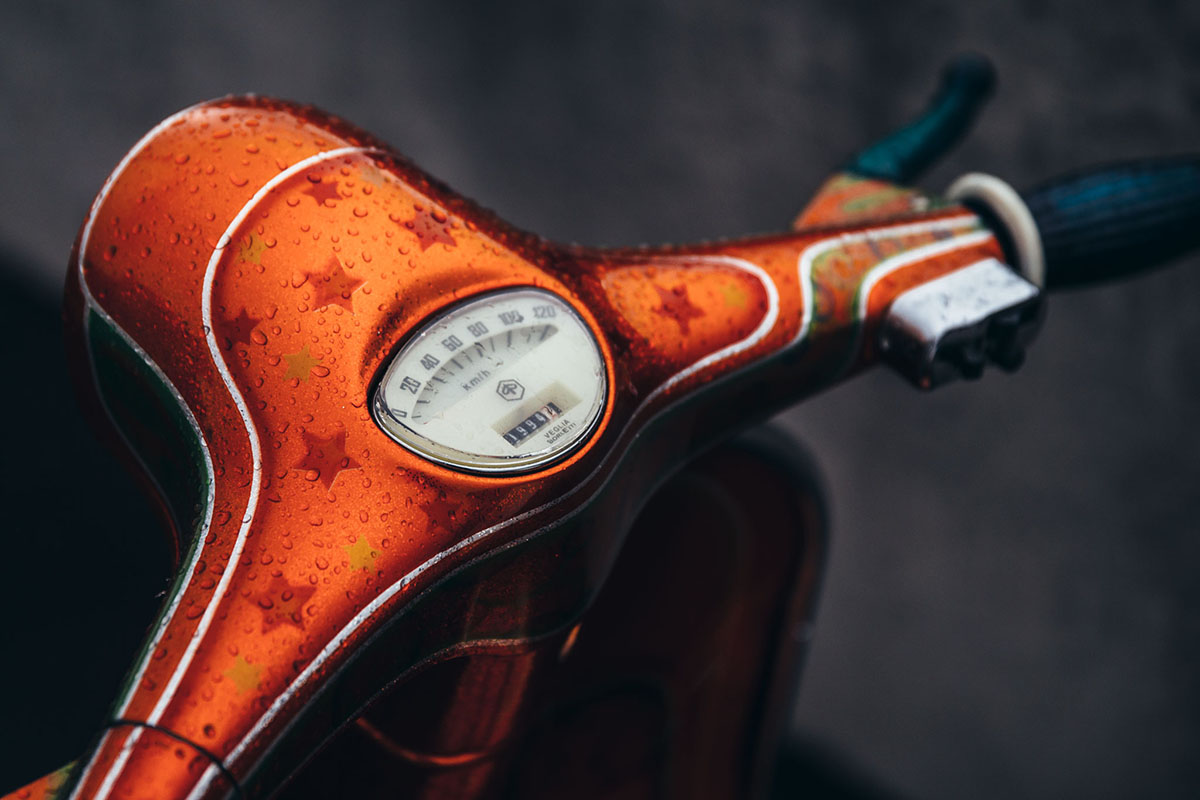 Something magic happens when riding this scooter through the streets. Despite grim day, with rain and grey skies, there was nothing but fun and happiness surrounding this scooter. As we rode past pedestrians, dull faces were swapped with smiles and eager looks. 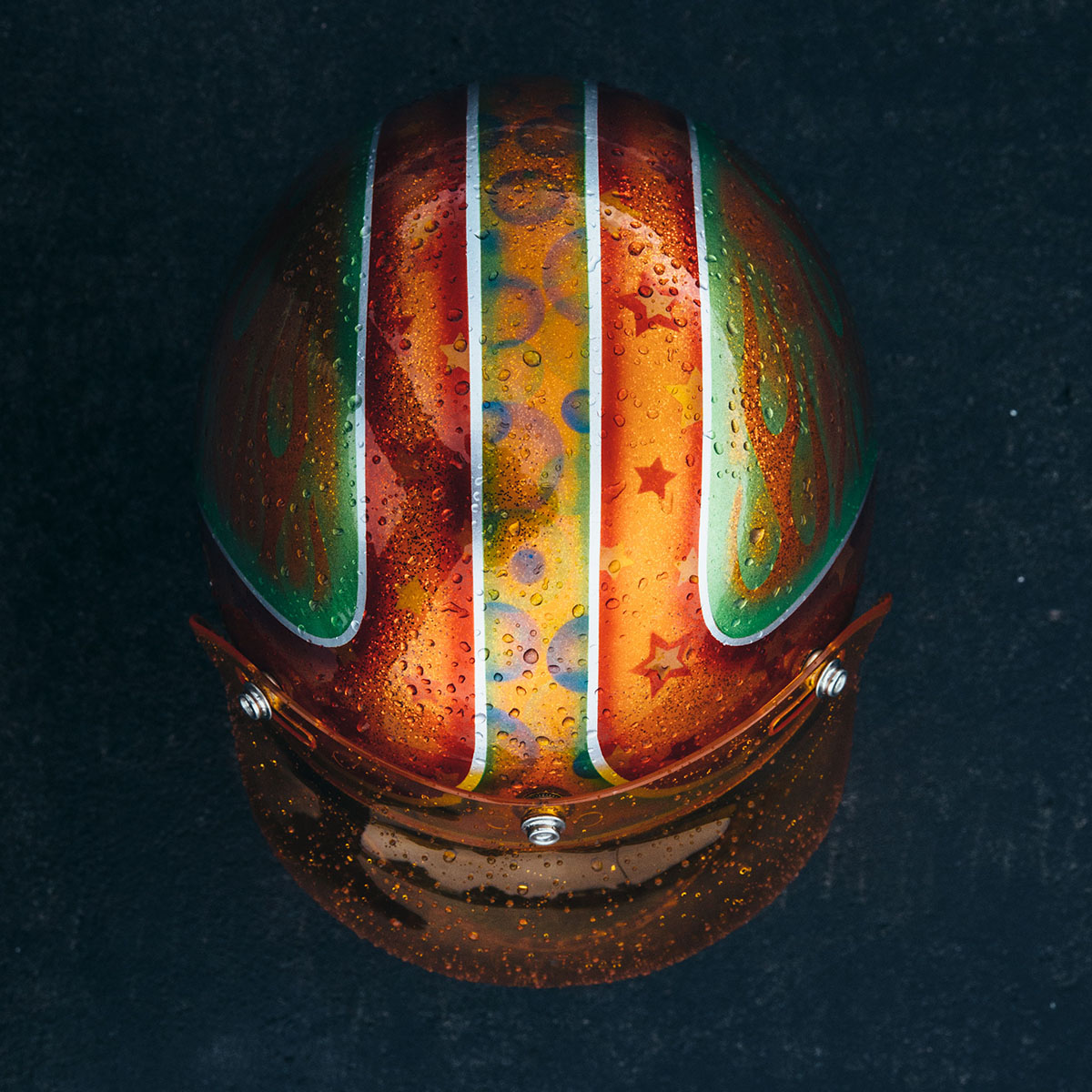 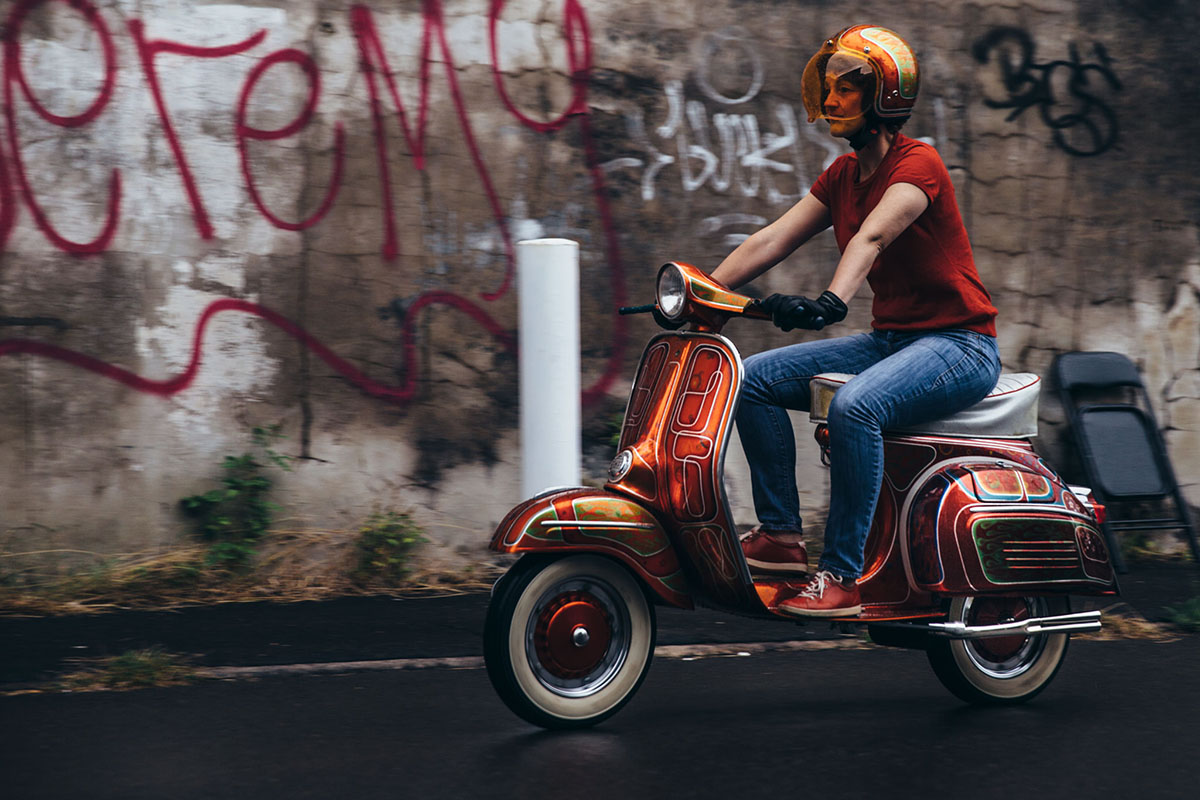 “There weren’t any major hiccups in getting Glitz to where it is today that I can recall – I do have a funny though. . I decided to take the scooter up the the 2012 National Classic Scooter Rally on the Gold Coast; we were still assembling it in the van on the way to the rally but we made it just in time. The show ‘n’ shine was the first day of the rally and I wasn’t planning on entering as I thought people would simply laugh at me. But as the crowd formed around the scoot at the muster point on the ride out to the venue I realised people liked what they saw, so I decided to enter.

It also won the once-off Rambo Award presented by the Wild Dogs Scooter Club in recognition of my achievement of going in to SE Asia and making something beautiful happen.

Given I’d used some of my pocket money from an overseas deployment to fund the project that seemed even more appropriate!

The trophy fell apart on the way home. “ 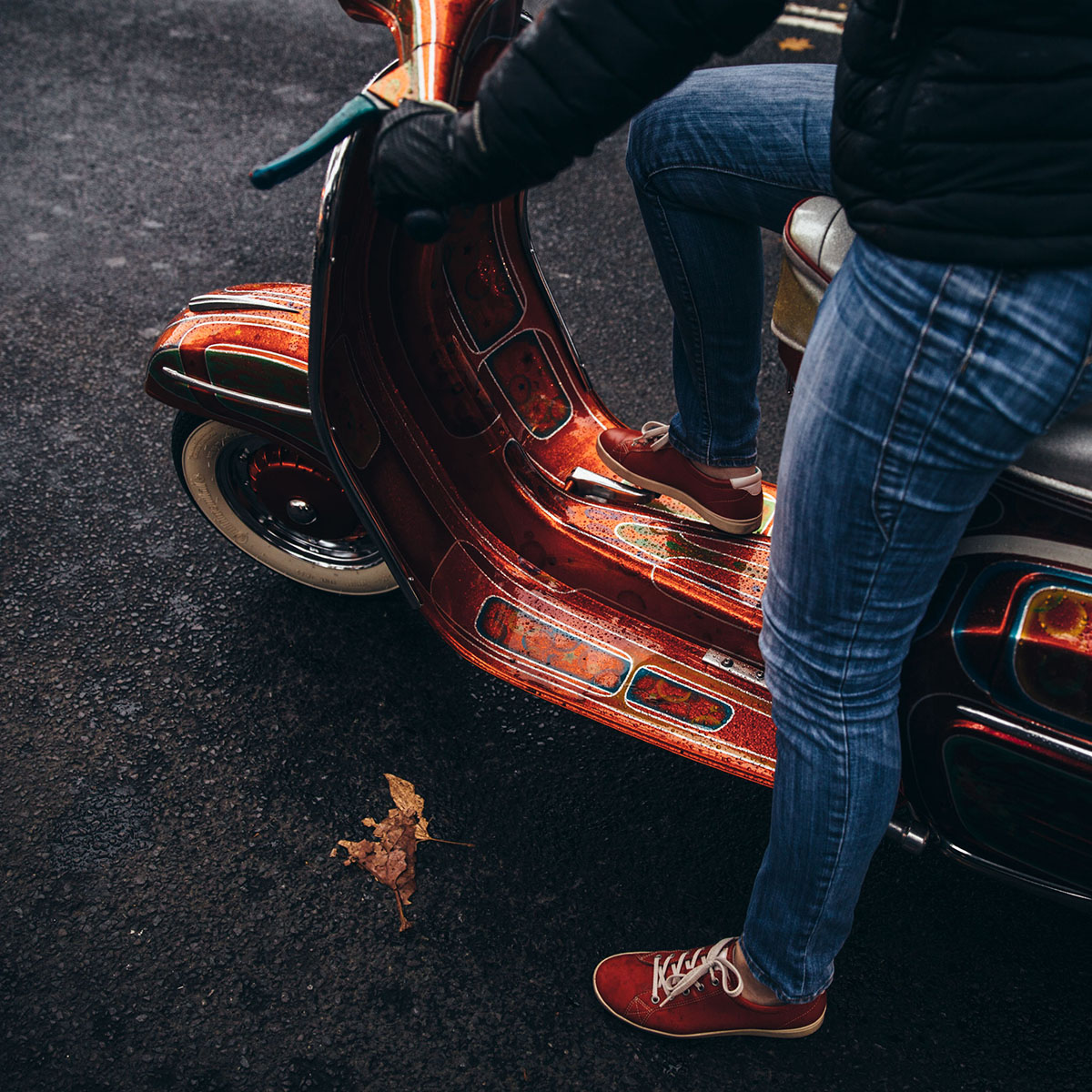 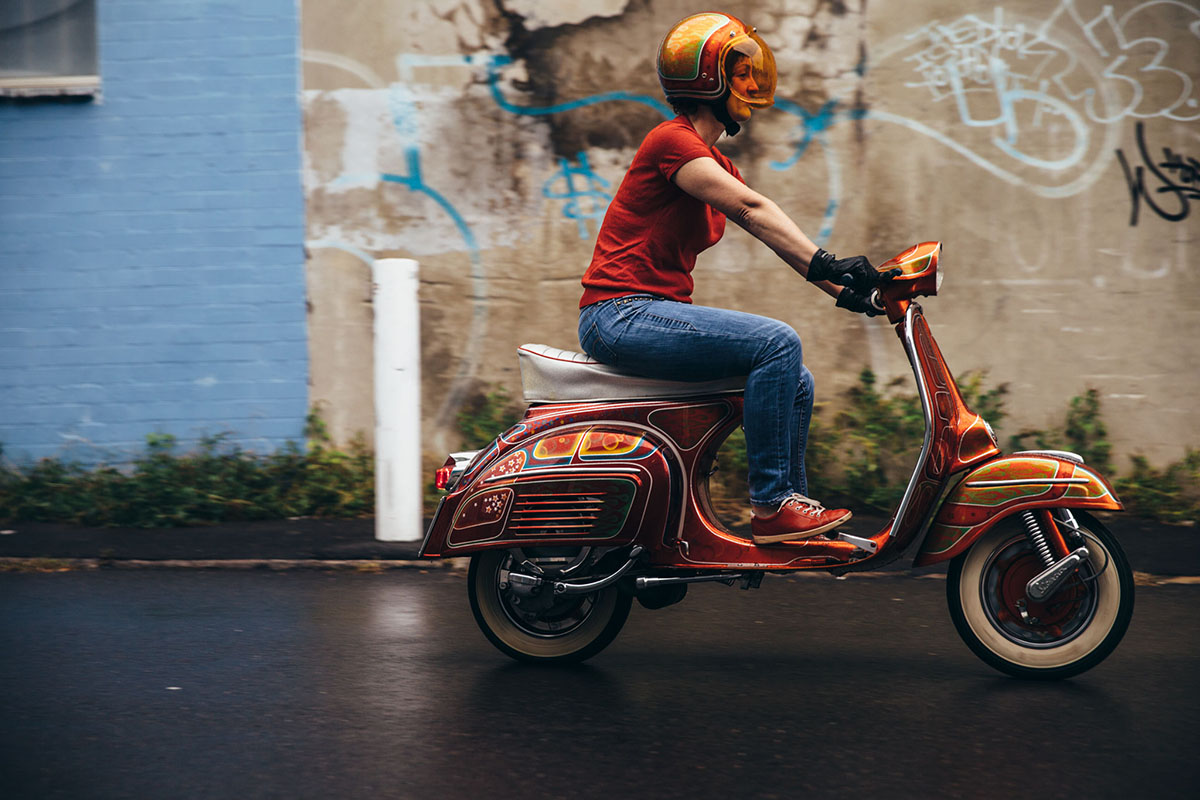 “No one single favourite thing, but a collection. My favourite part of the paint work is the front mudguard, that’s the part the helmet was painted to match. I love the sound it makes and I love that it’s unique.

But I guess the best part actually is that it makes people  smile and I get lots of waves as I ride by. That’s nice.” 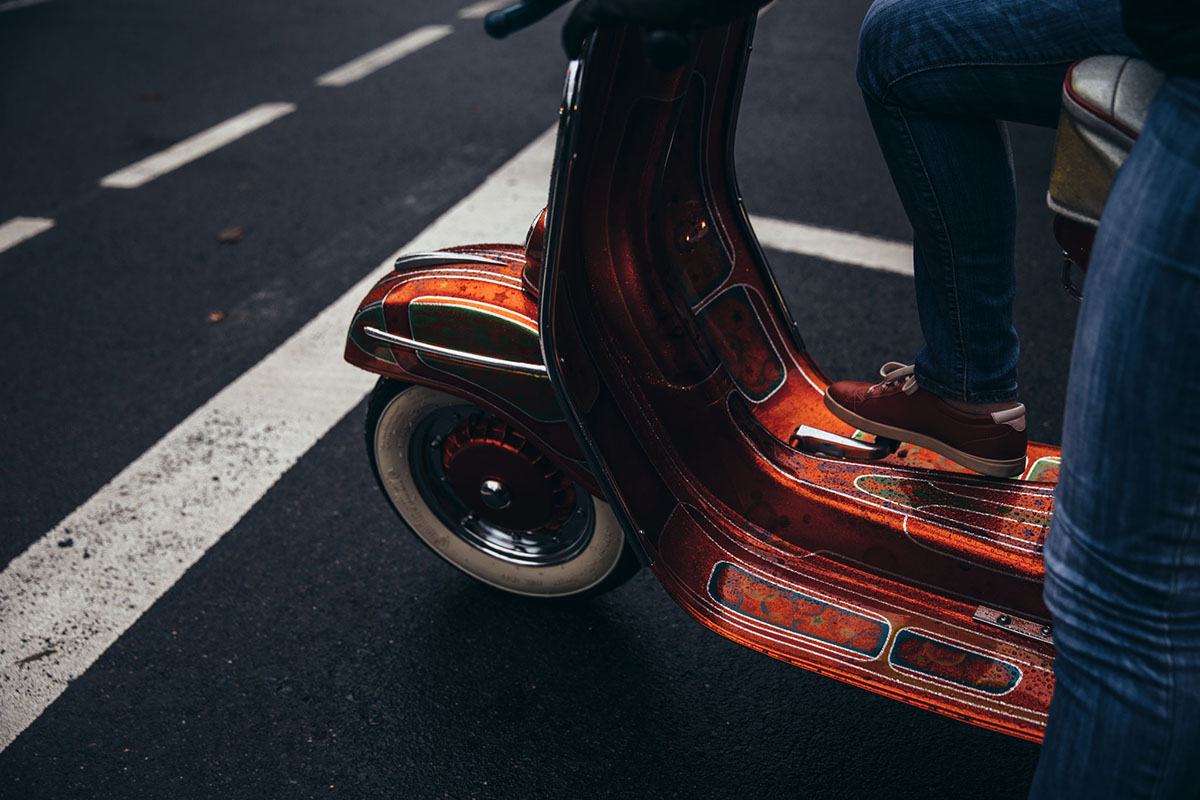 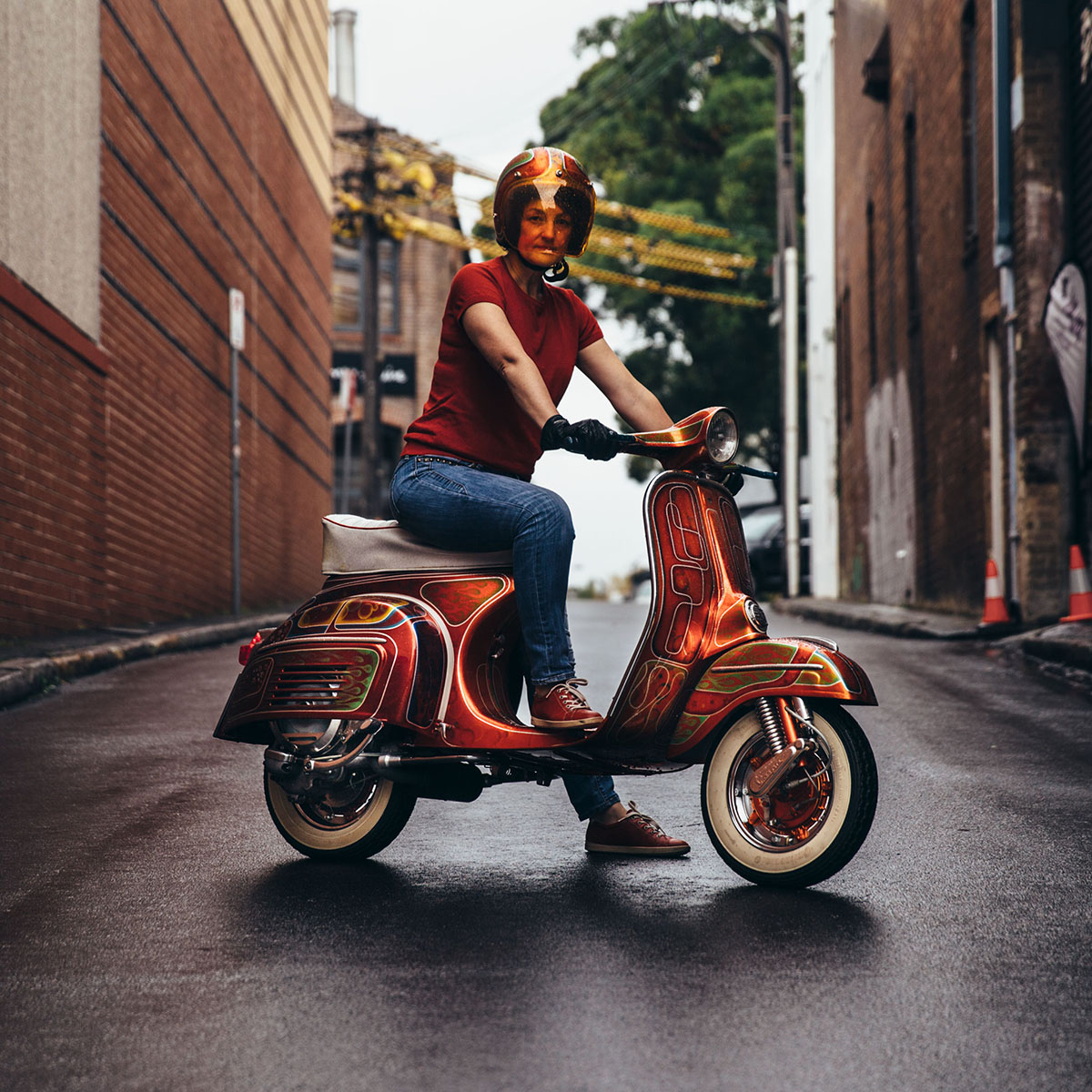 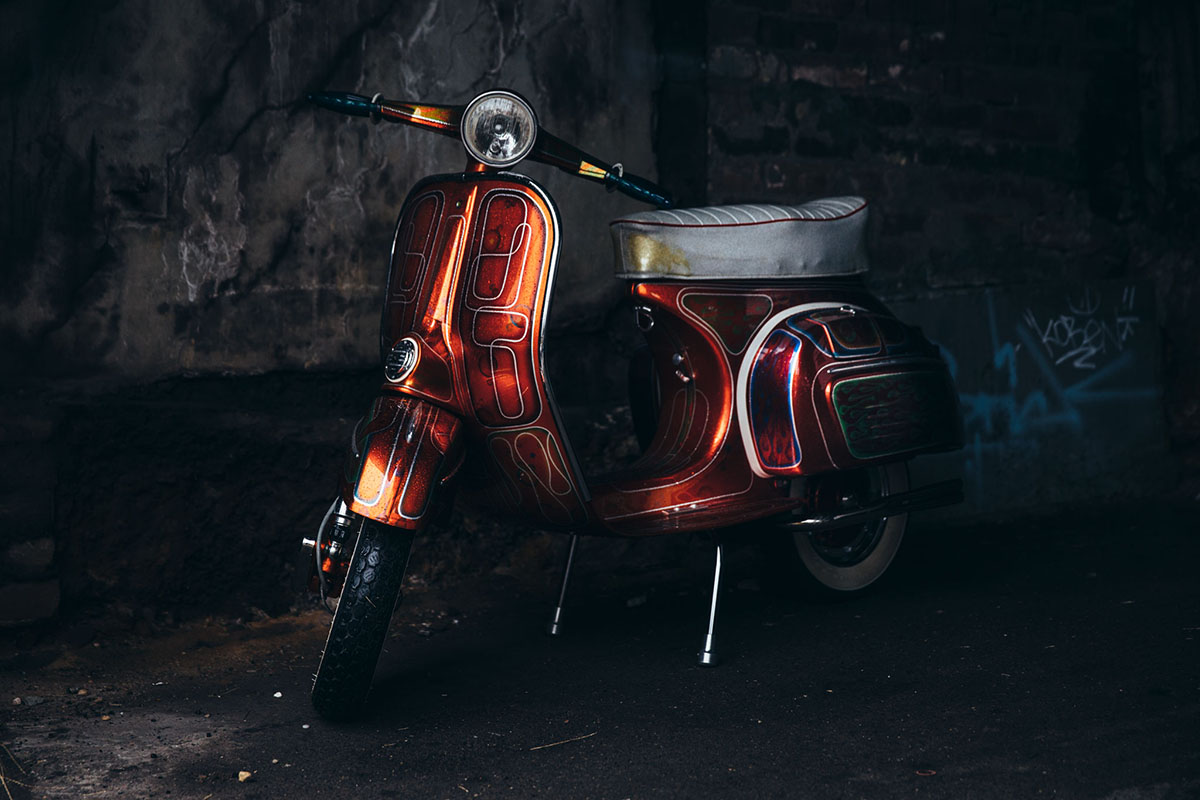 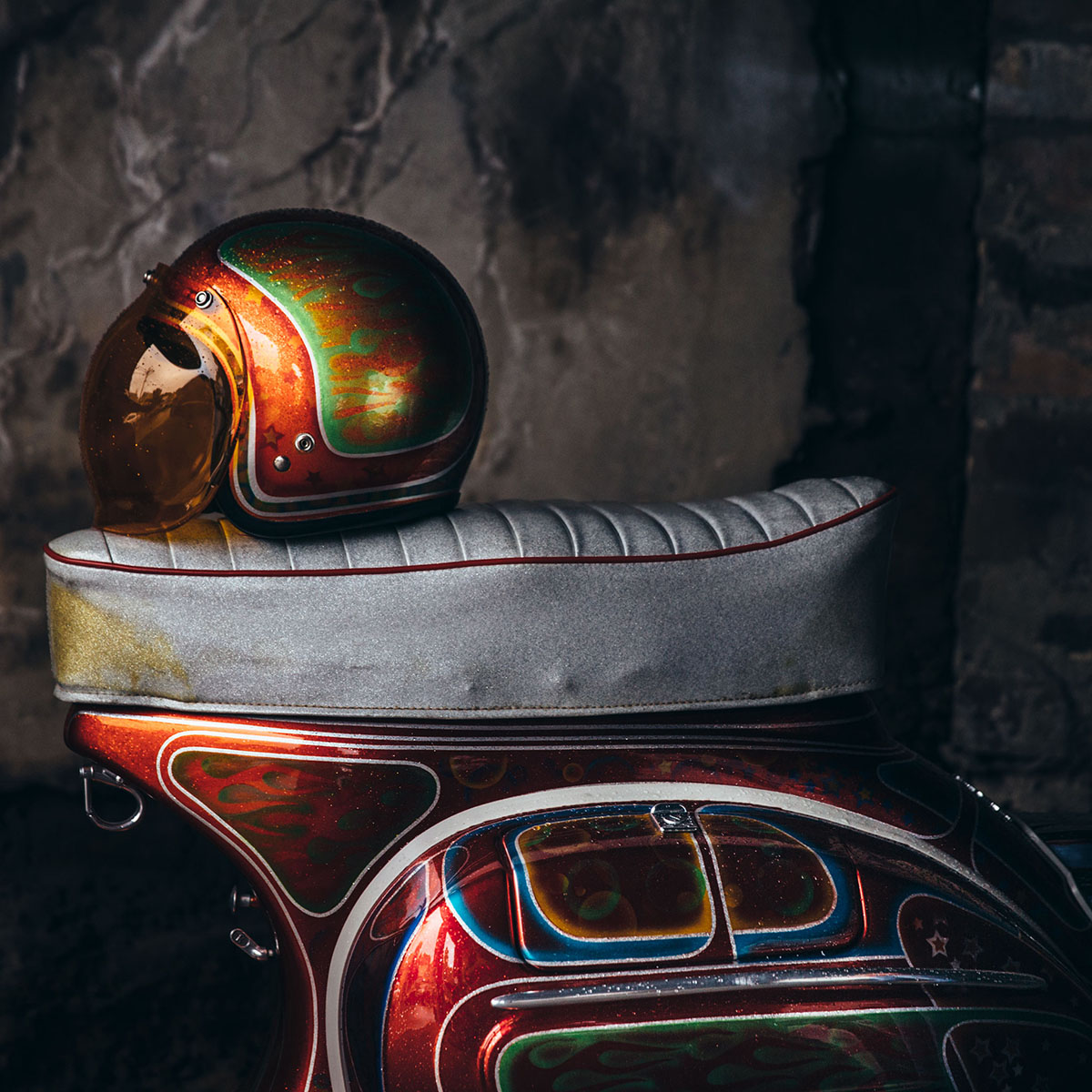 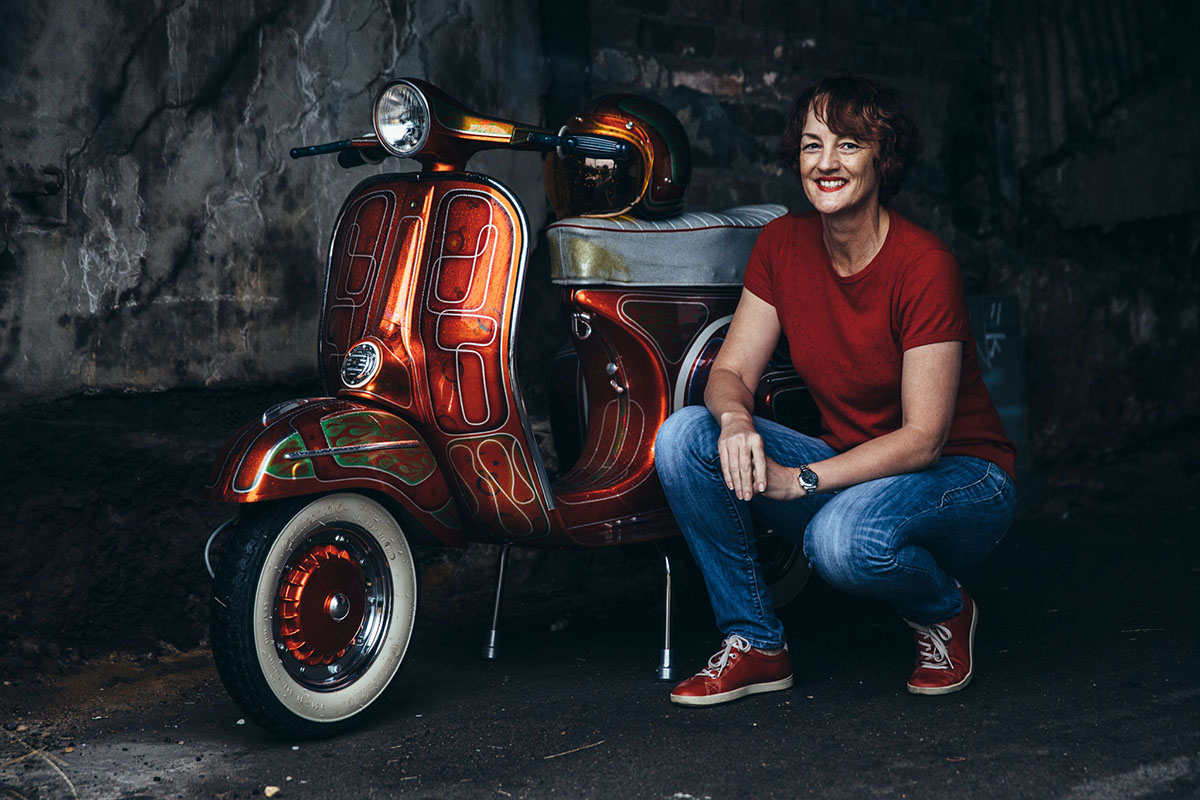