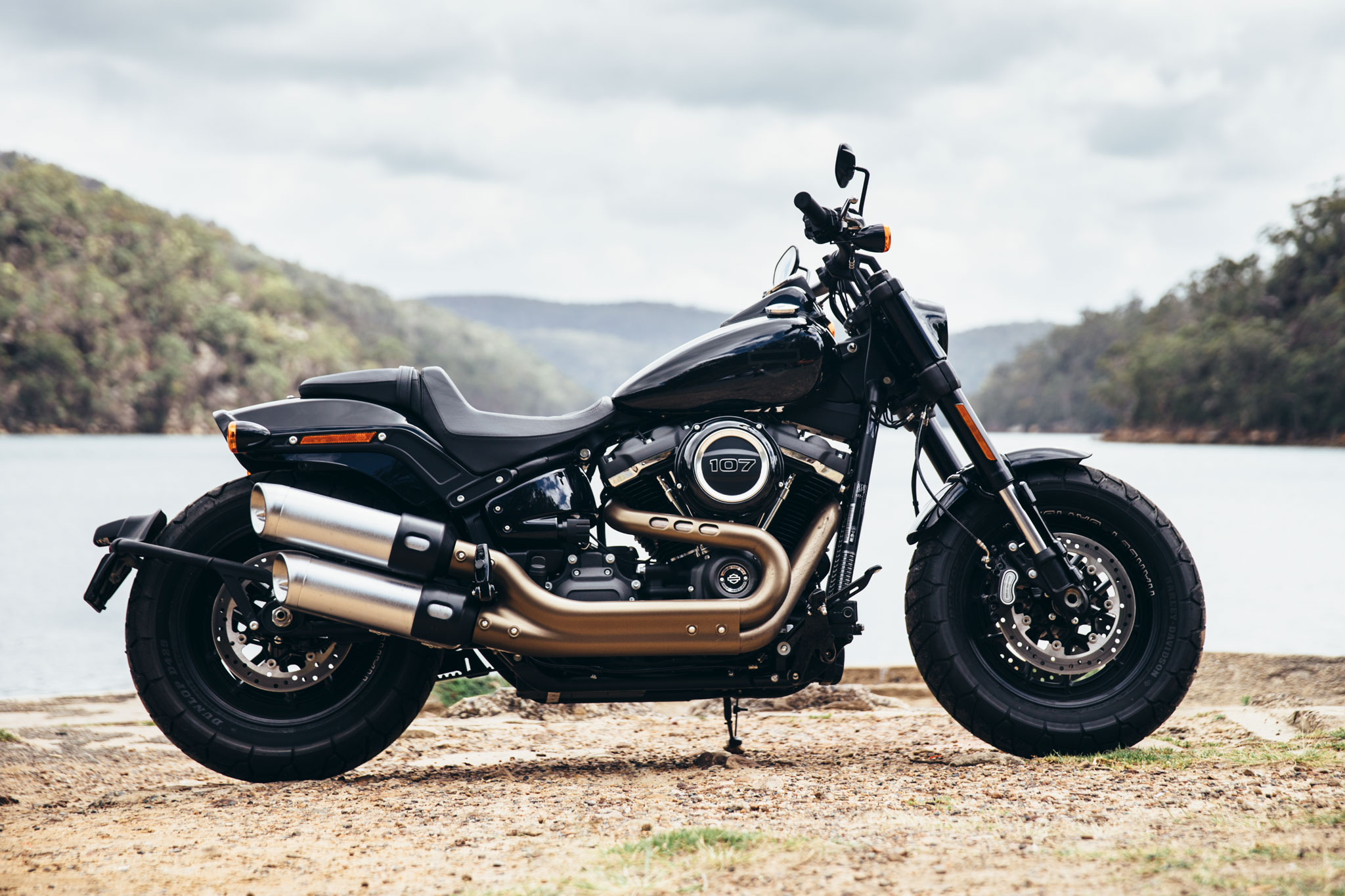 As a non-journalist, shit like this shows me just how awesome the life of a motorcycle journalist sometimes is. It’s a sweet fucking gig. Being flown around and accommodated while riding the latest and greatest bikes that have been built from a variety of brands; the camaraderie, the smiles, the spirited riding – it’s cool. I could live this life if I learned how not to swear while writing. However, this blog is not about the jet-setting lifestyle of writers, it’s all about the new chassis and bikes that now fall under the softail category from Harley-Davidson. 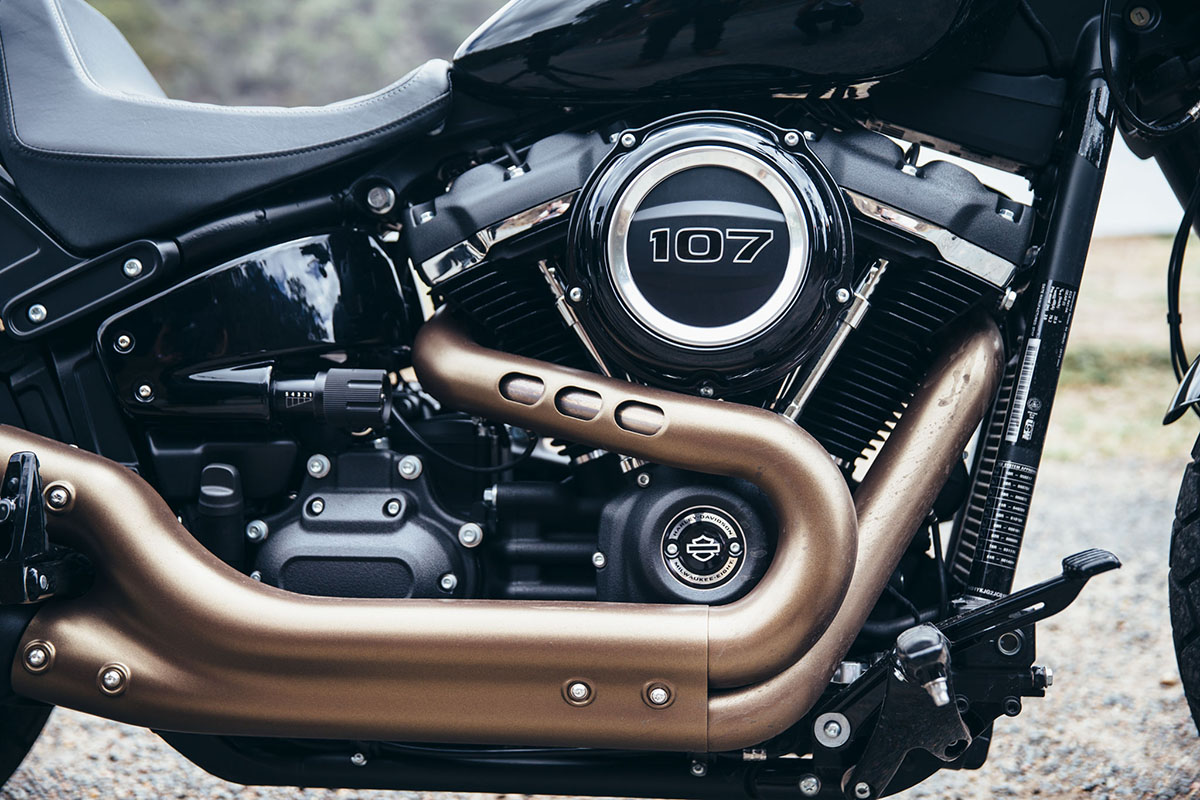 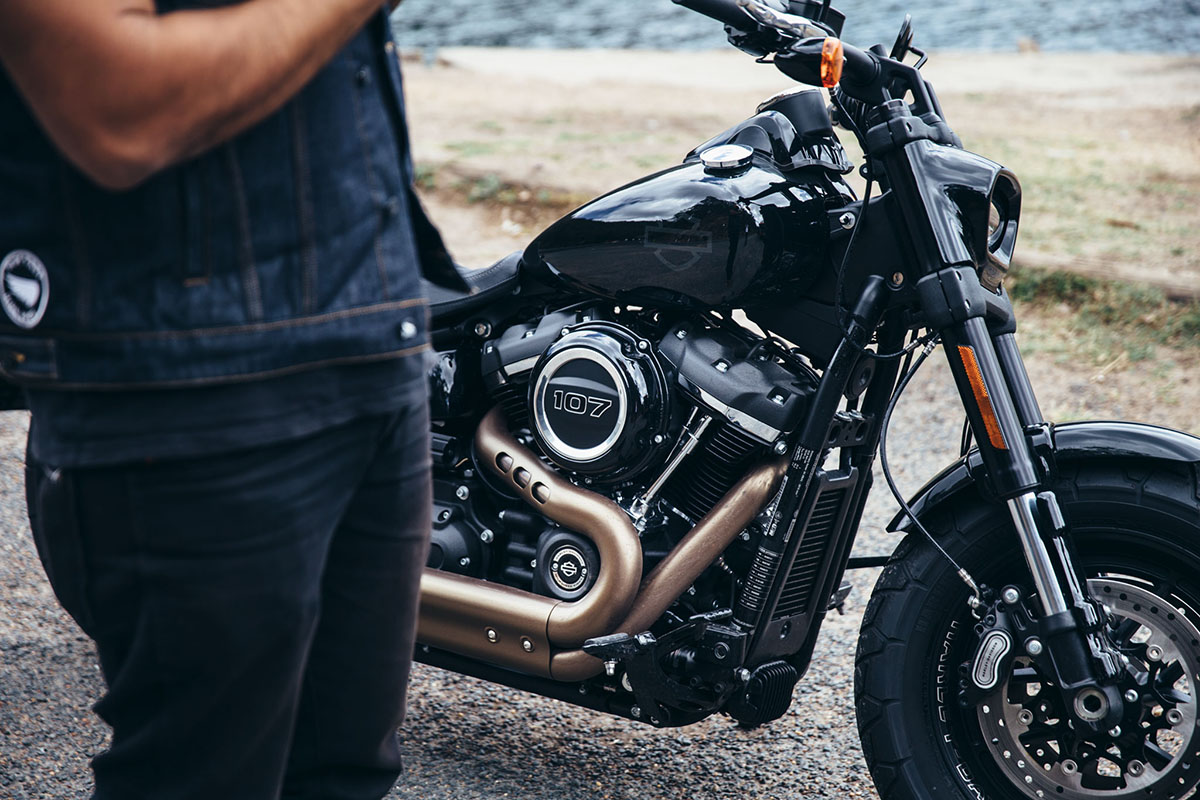 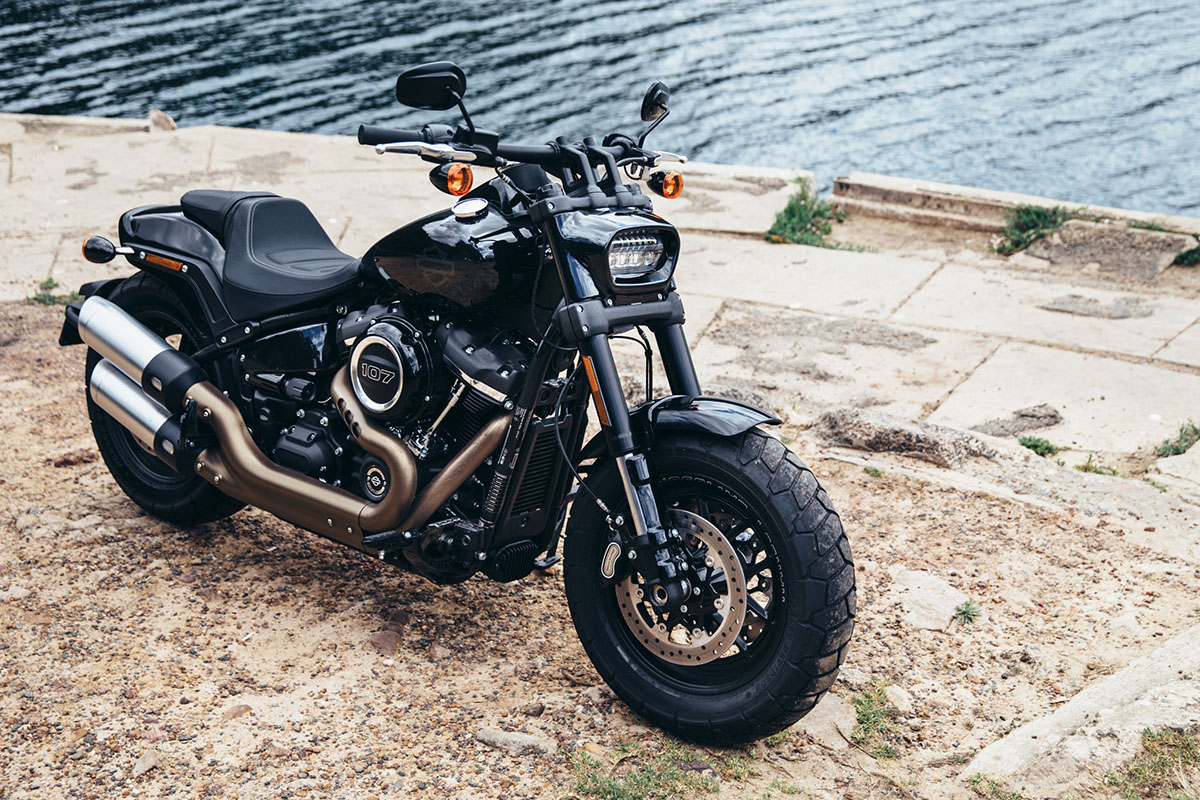 For this article, I’m going to focus on the new Fat Bob, while the next article will be based around the new Street Bob.   They are both called Bob. One is fat, one is skinny.

To understand the present, we need to first understand the past – so feel free to skip the next paragraph or two if you have zero fucks to give about history or learning some facts. 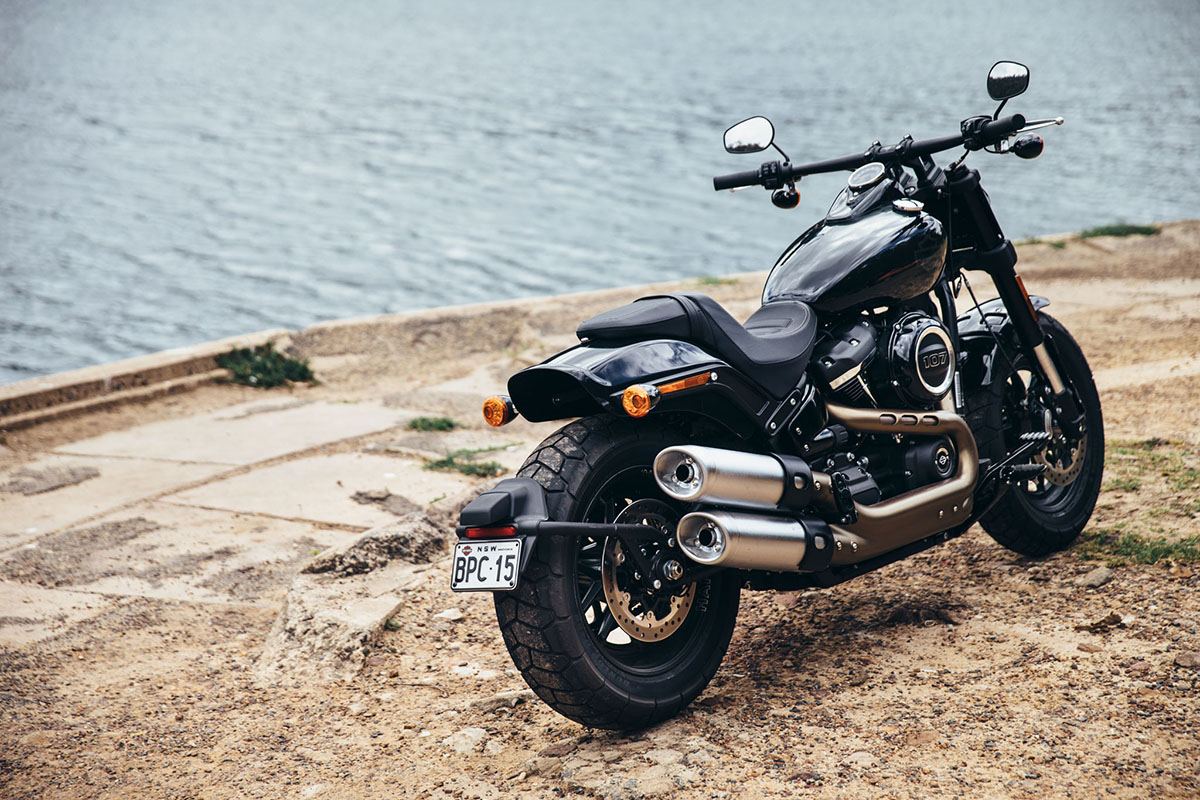 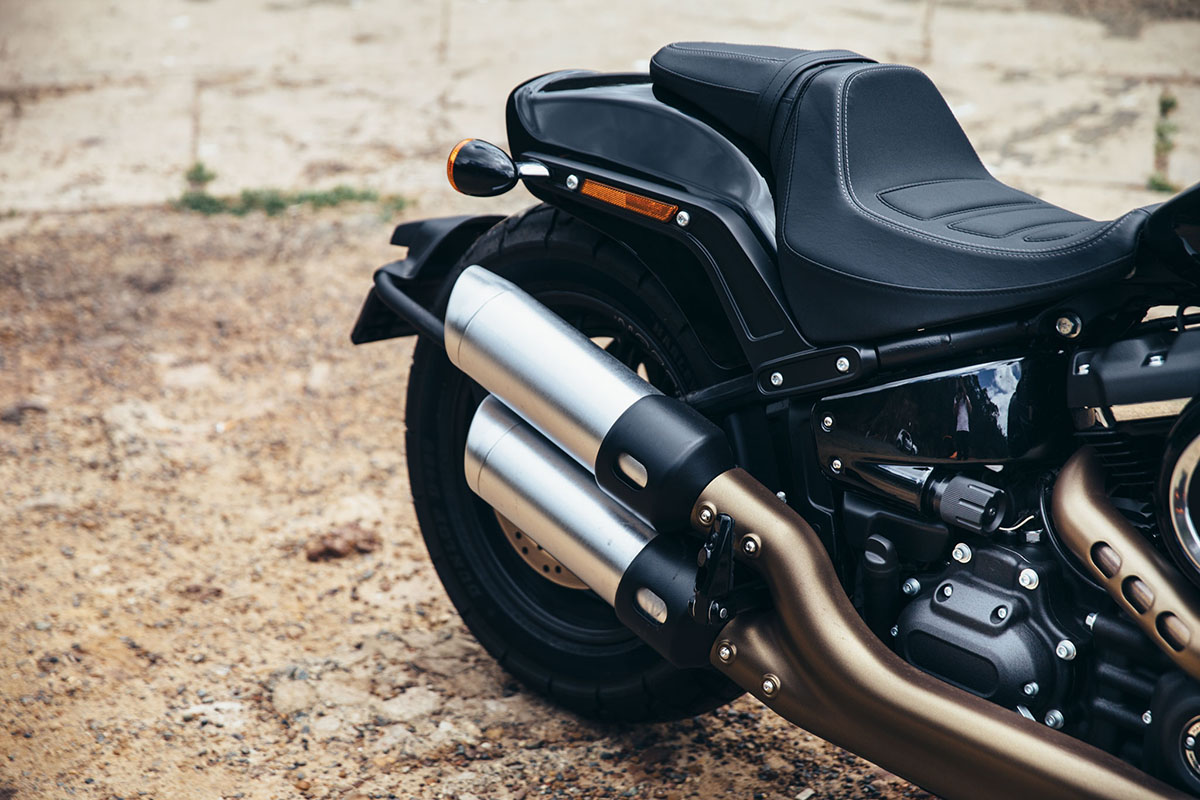 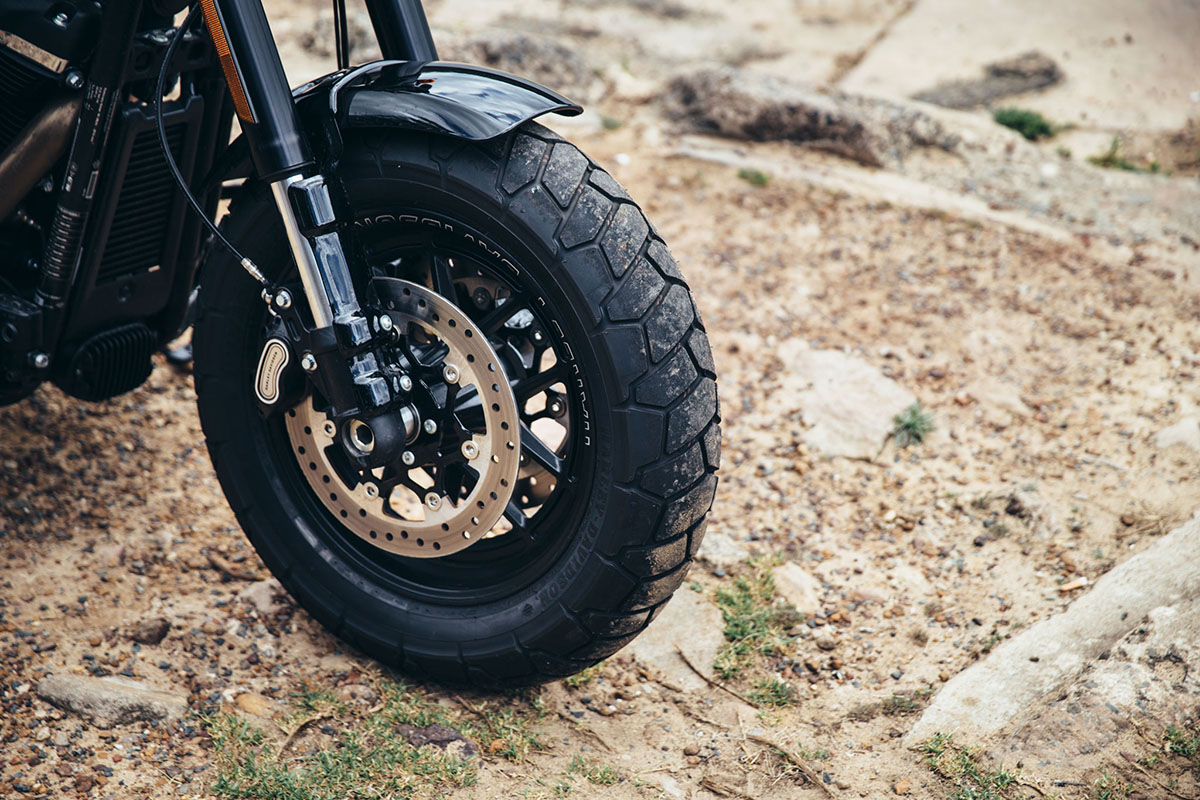 The first ever soft-tails belonged to that of the Ediacaran Period c. 240 Million BCE, followed shortly by the dinosaurs and all sorts of other definitely real animals and mythological beasts. Back to in a similarly ancient time in 1984 CE saw the release of the FXST Softail. Since this momentous… moment, the word has been expanded upon to include other motorcycles with hidden rear suspension. These machines were designed to mimic the look of the rigid frames of yesteryear, while still offering the actual comfort and practicality of rear suspension. All of the street cred, with none of the sore body.   If we’re going to chat about Softails, then we’ve got to drop Bill Davis’ name. A dedicated Harley rider and engineer, it was Bill who designed the first Softail in the mid 1970’s. This first design featured a cantilever swingarm pivot at the bottom and sprung at the top, with the springs and shock-absorber being hidden under the seat. 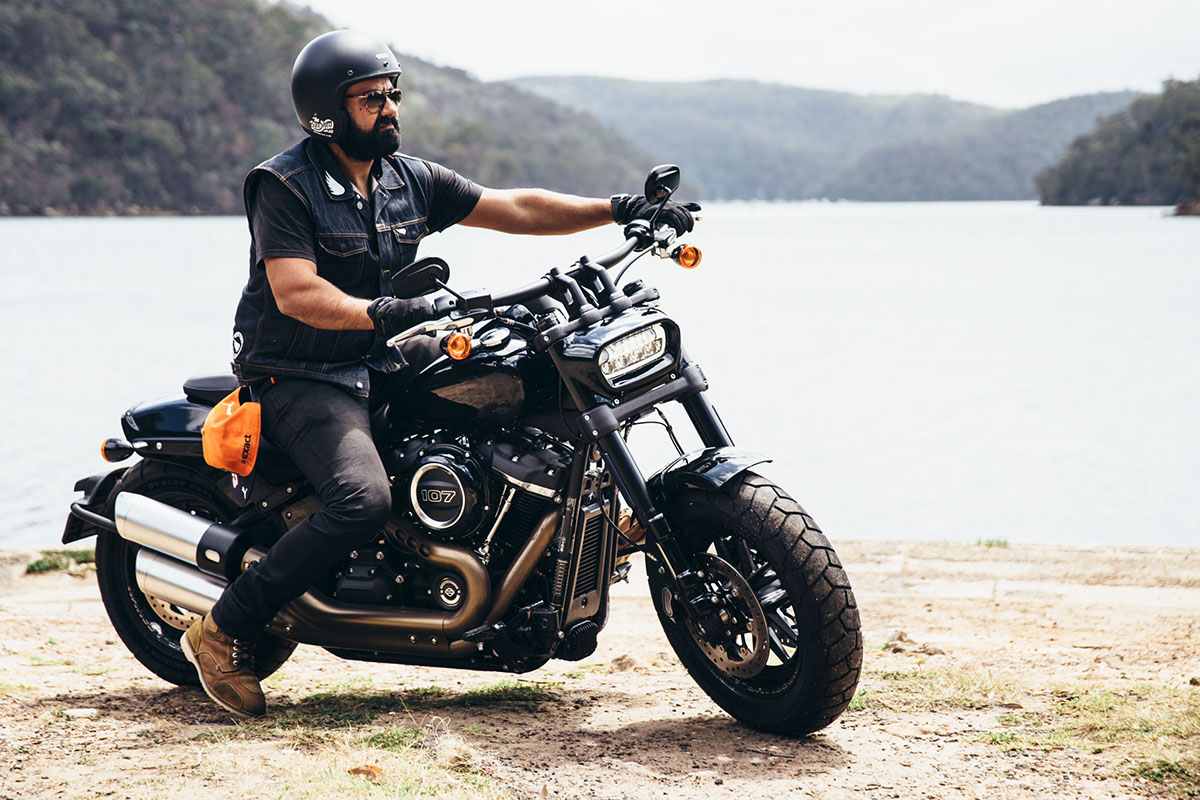 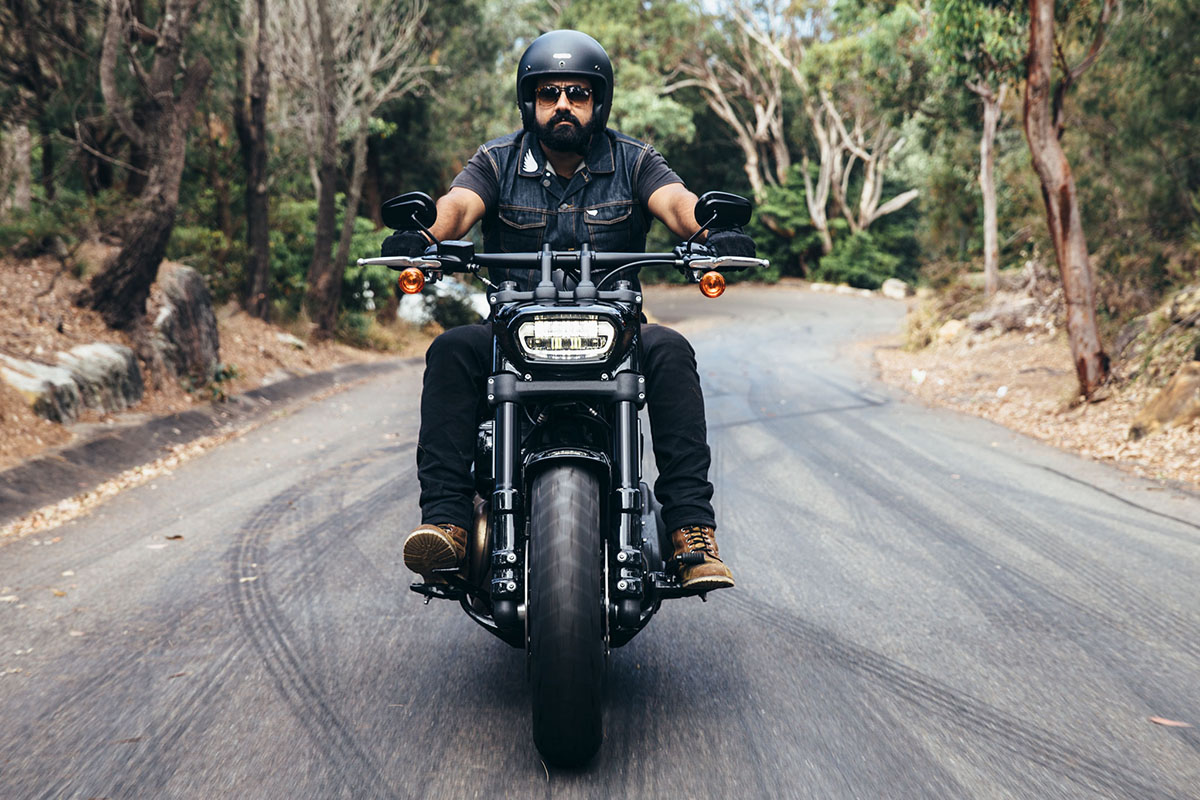 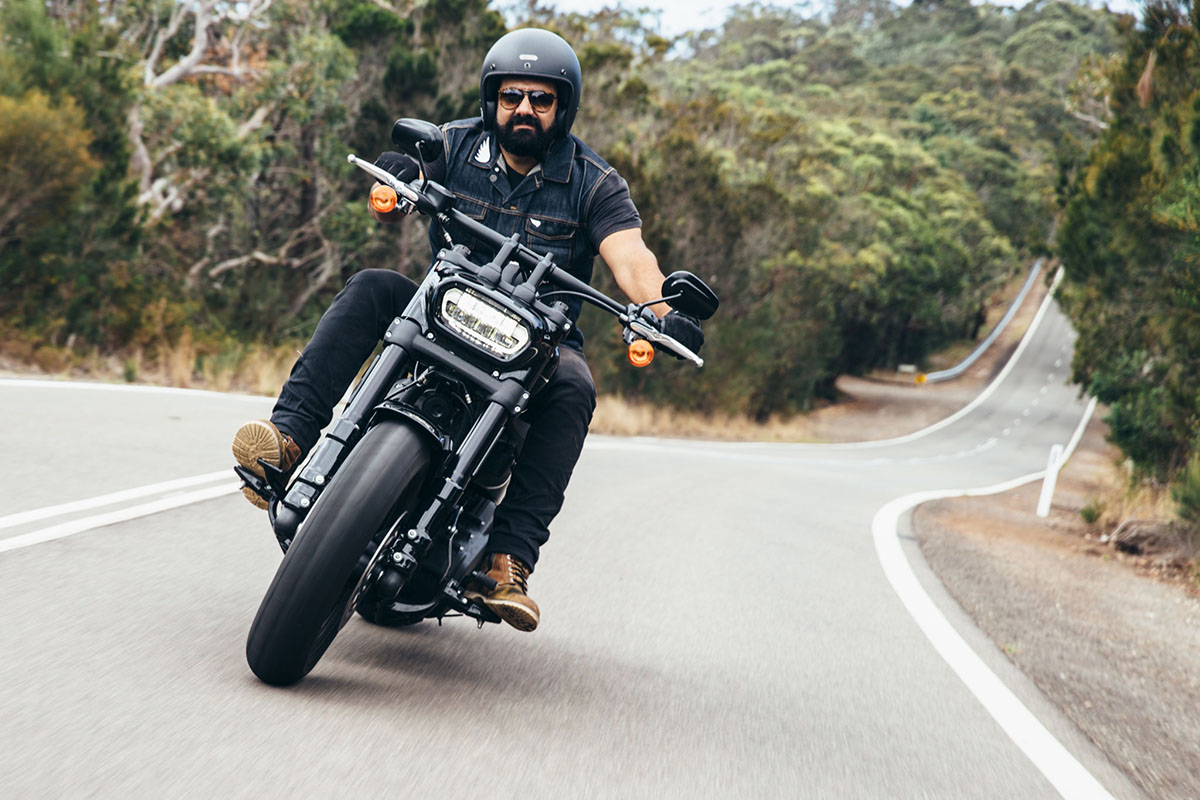 After Davis created a prototype based on his own ’72 Super Glide, he had his design patented and arranged a meeting with Willie G. Davidson. At this meeting, Davidson was impressed, but made no concrete commitments. This interest would remain stagnant in the following months, with still nothing concrete to move forward on.   It was in April of 1980 that Harley-Davidson started work on its own rear suspension set-up that would capture that hard-tail motorcycle. This would be the same year that legendary drummer, John Bonham, would die in classic rock-and-roll fashion, and the greatest rock band of all time, Led Zeppelin, would call it quits. None of this is relevant at all in the history of Softails, but something that simply cannot be ignored. 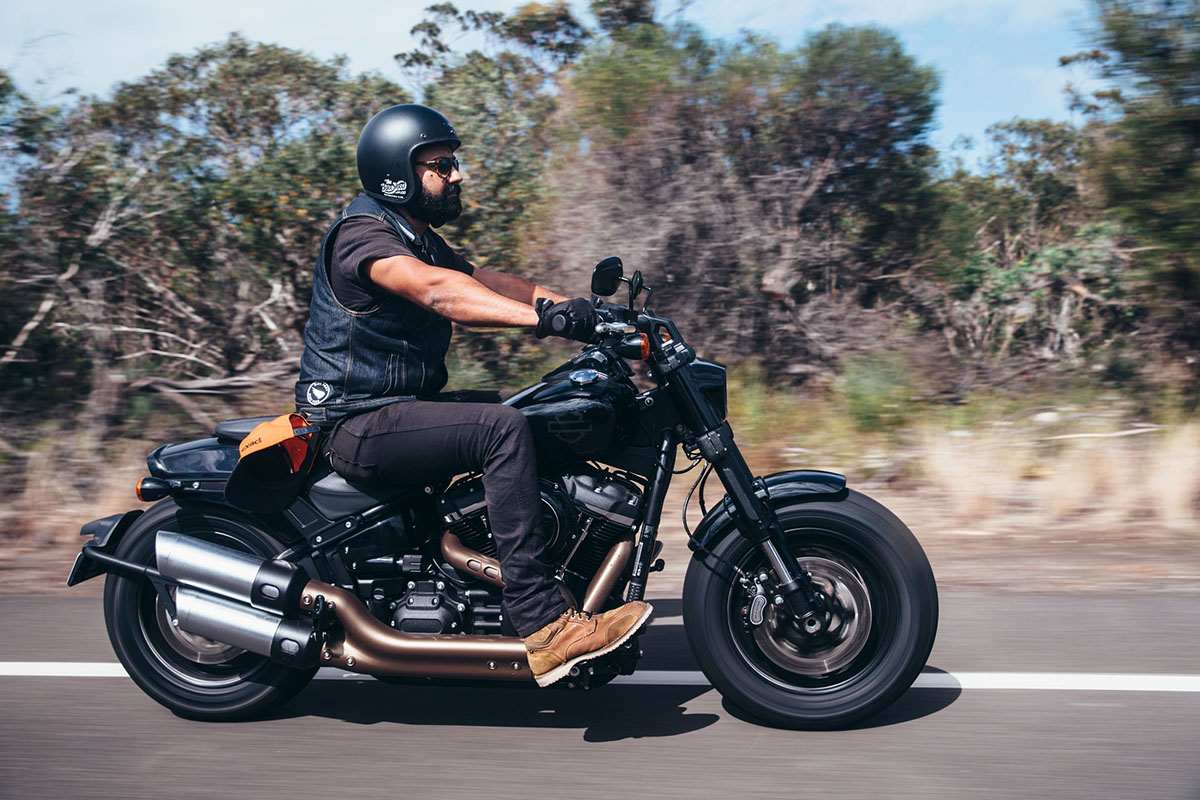 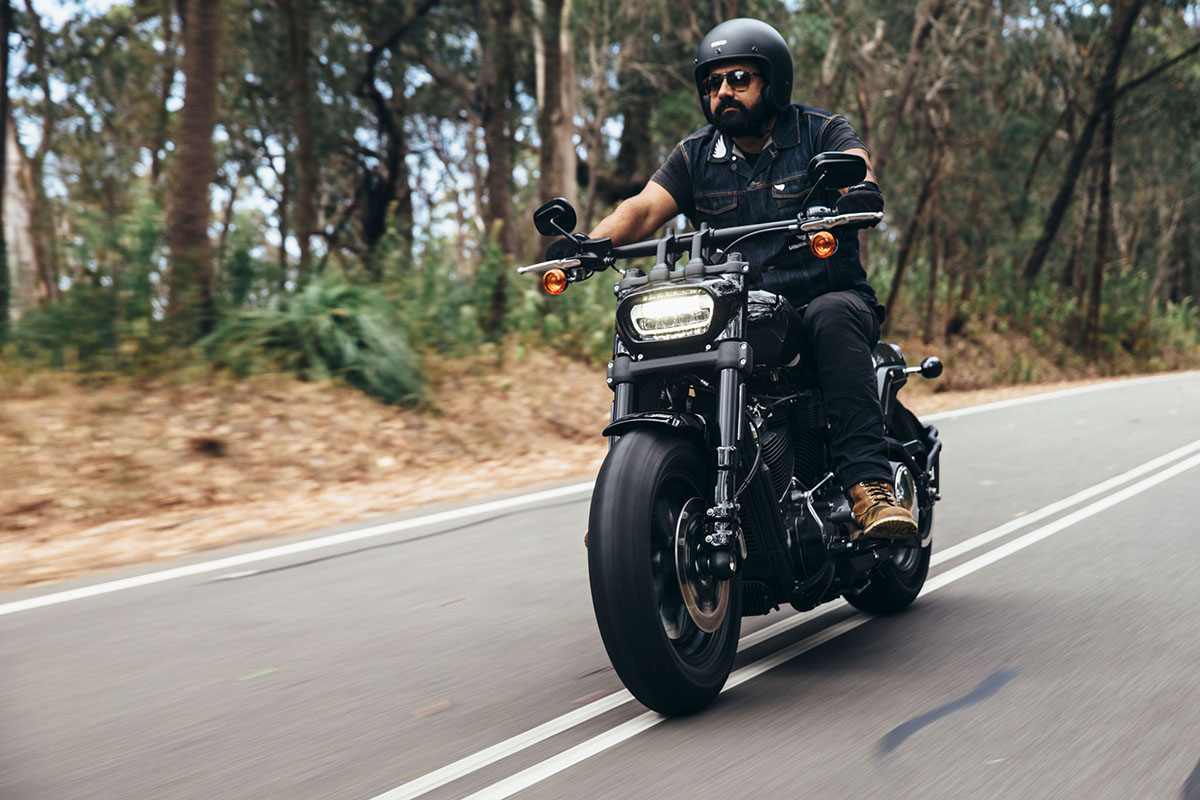 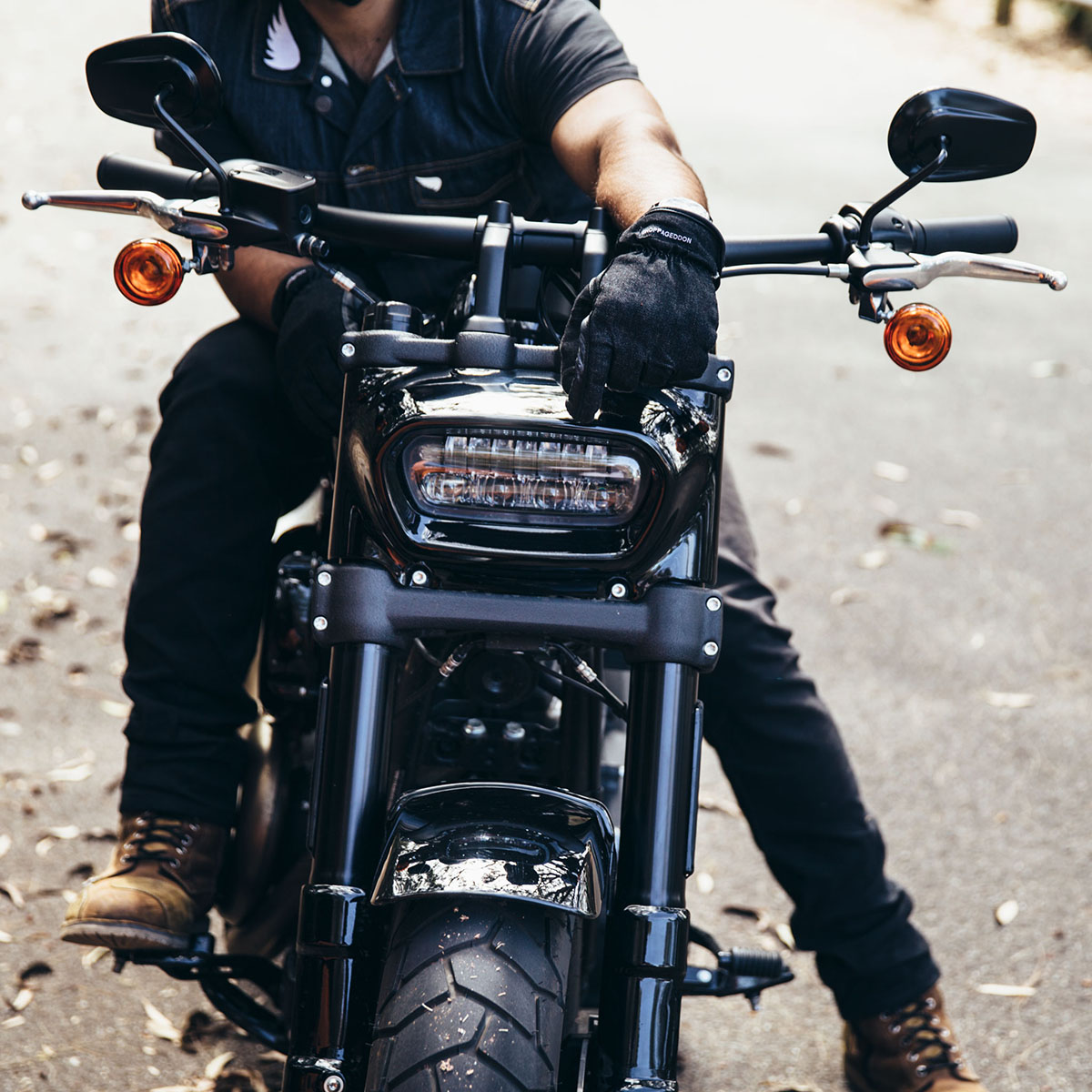 With the all-new stiffer (insert erection joke here) chassis (34% more stiff to be exact) and the introduction of the Milwaukee-Eight engines, the new Softail line-up has basically taken the majority of the Dyna models under its wing. This is why current Dyna owners took to social media to vent their frustration upon the announcement of these new machines. The Dyna is now dead. But there is a silver lining – Dynas in years to come should grow in value, so put the Kleenex away. Anyone silly enough to vent his or her frustration before actually riding these new Softails should read this next part carefully – these bikes do not disappoint, so go talk to your local dealer and book a test ride. 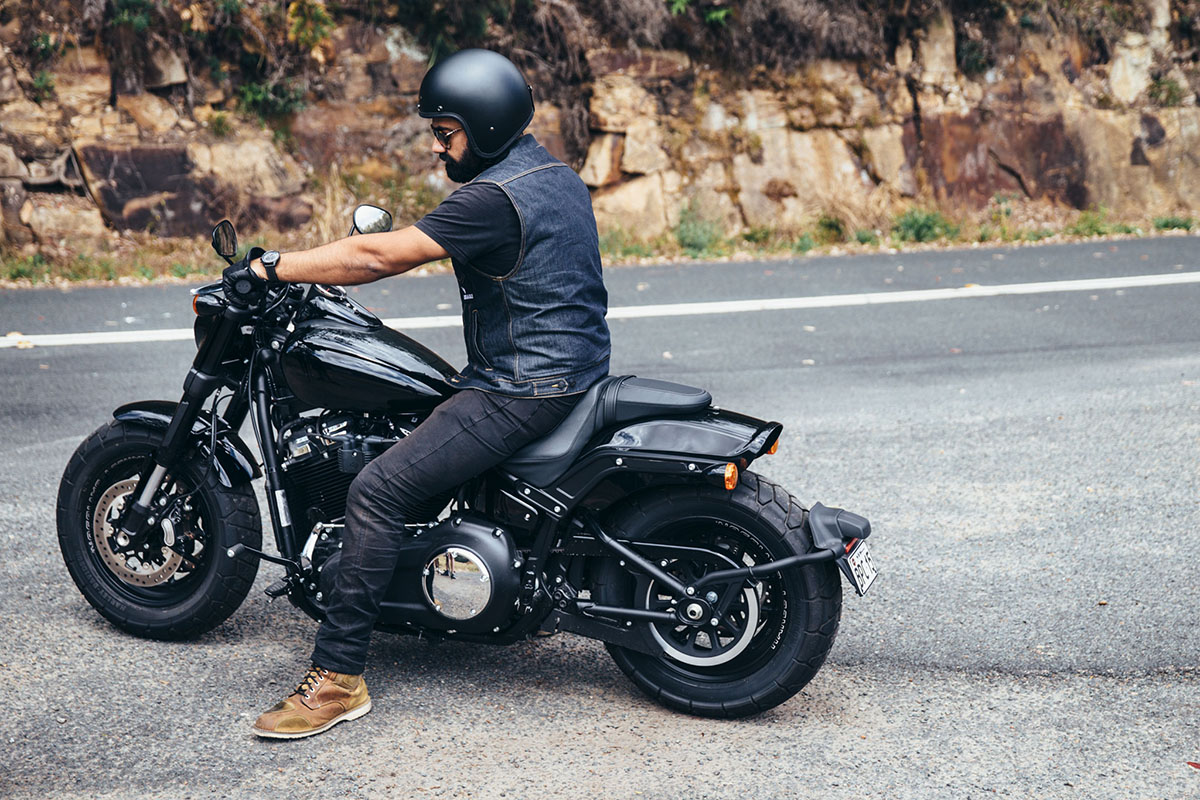 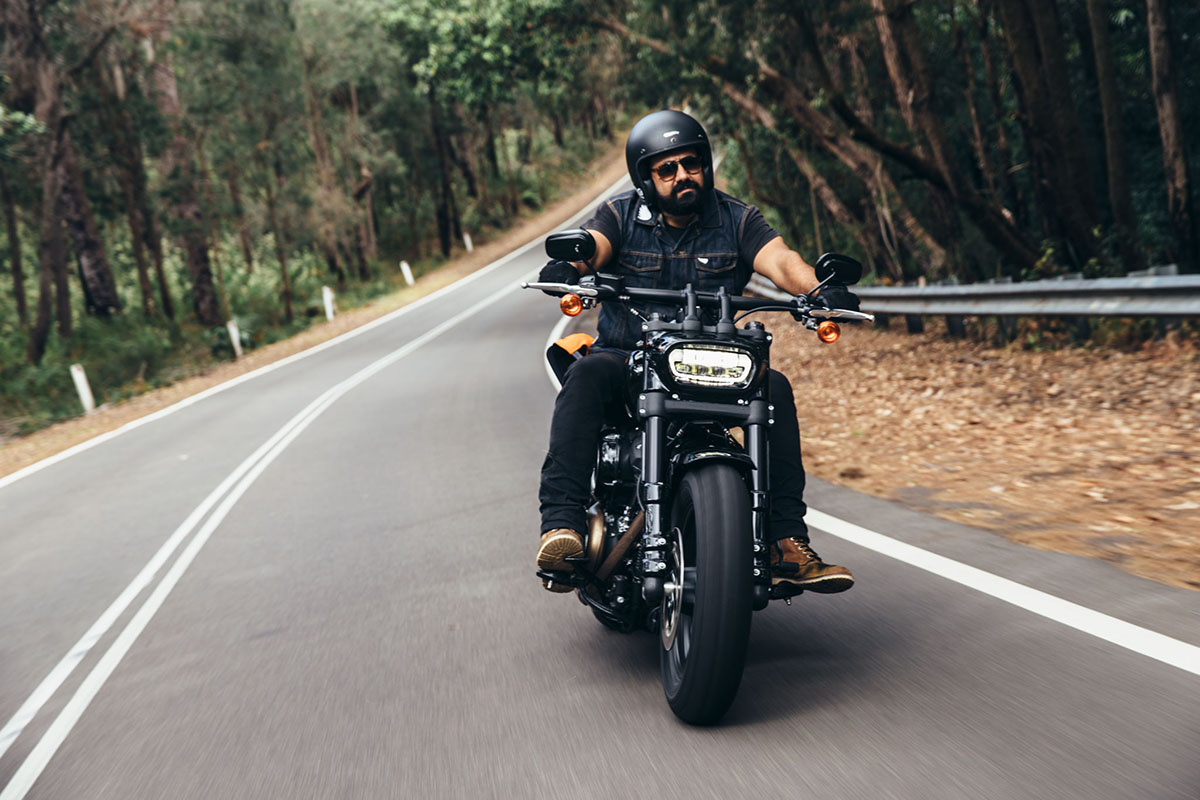 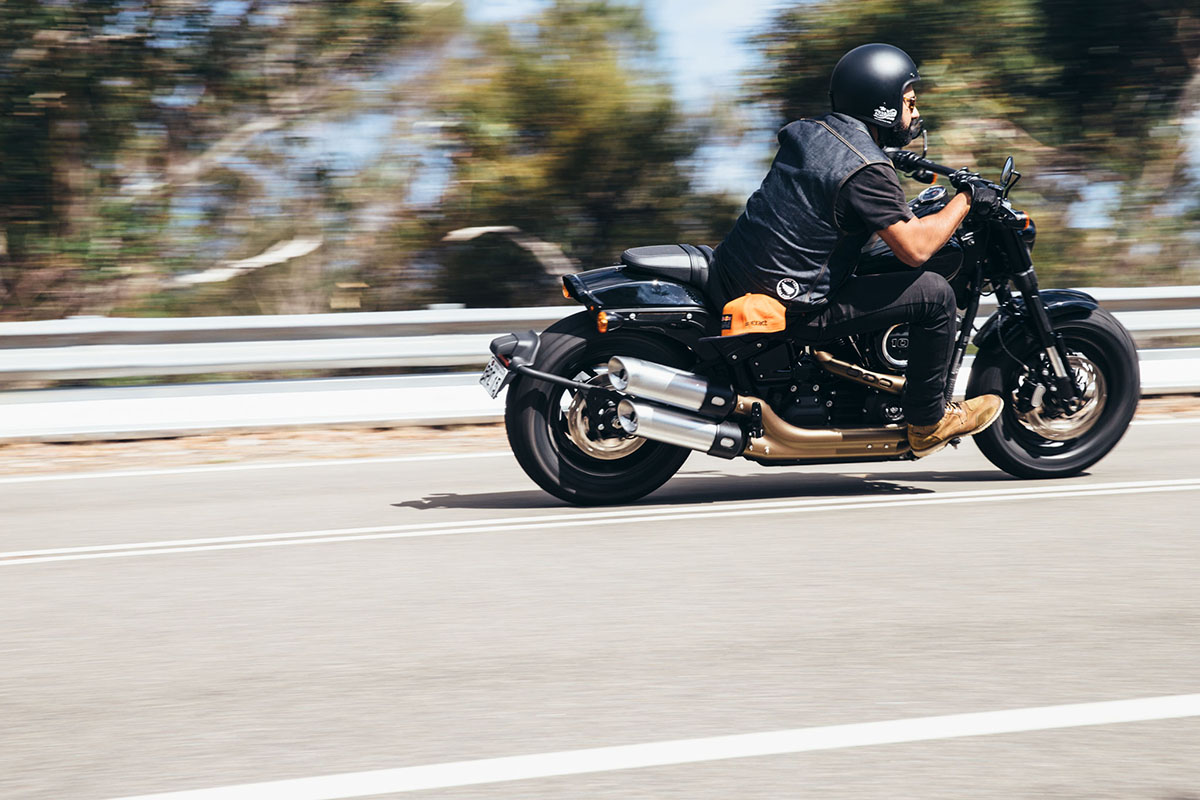 This is by far the craziest machine Harley-Davidson has produced in a while. It’s so fucking fun. Just as crazy as the XR1200, but still keeps true to the HD feel. The HD Milwaukee crew said they’re confident in keeping their customers happy while also pushing the boundary that little bit further. These boundaries have been pushed over the previous years, with the introduction of a learner approved bike, the introduction of a the more nimble Roadster model, Live-Wire the electric bike and now this – the 2018 Fat Bob which is unlike anything you would expect from Harley-Davidson, while still keeping the HD fanatic happy. 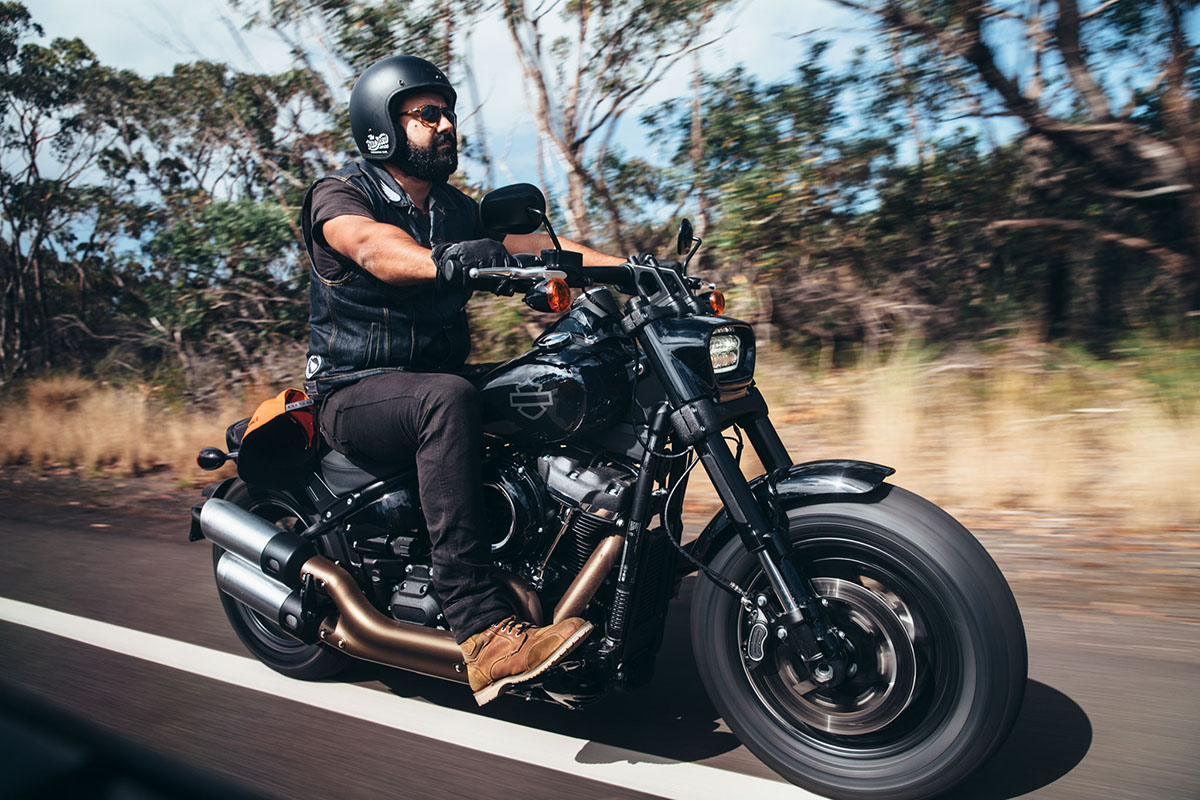 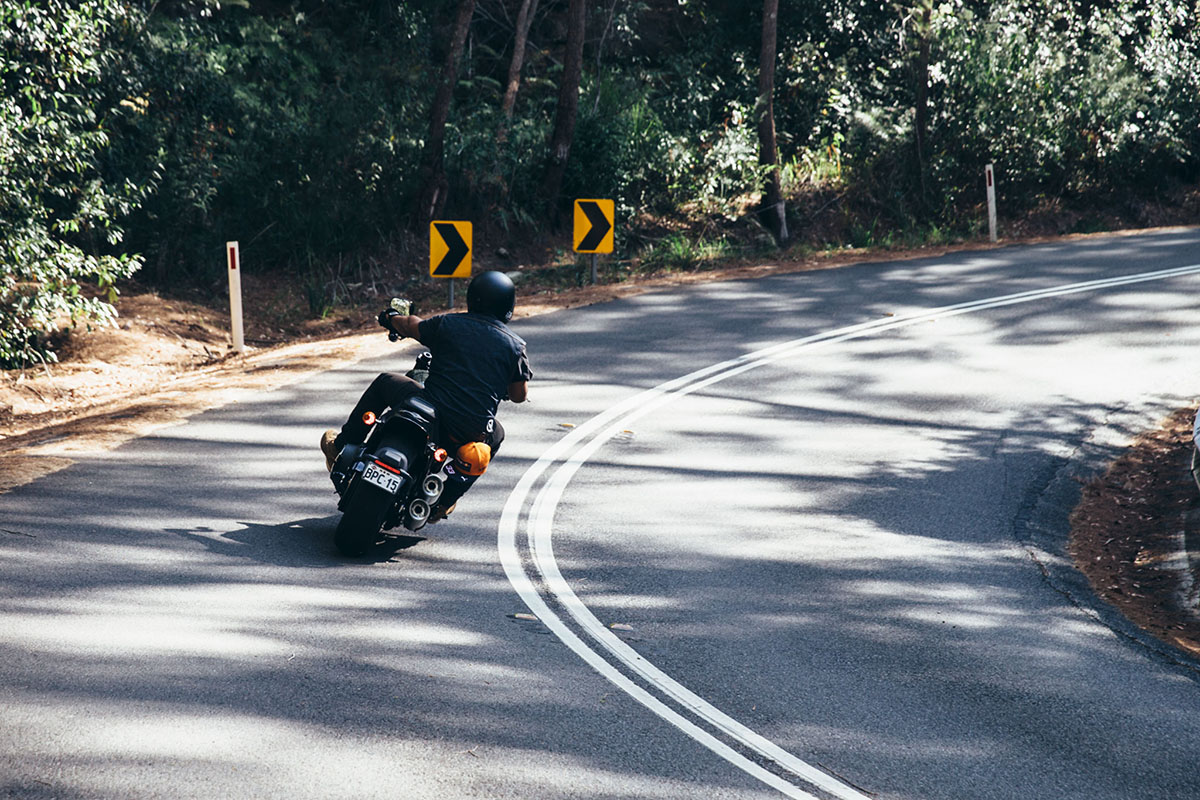 Enough of the boring fluff, let’s get down to the actually bloody review of this controversial machine. It’s time to get to the heart and soul of the Fat Bob. I didn’t take the opportunity to ride the 107 (while in Spain); I committed all my energy to the 114. The 107 comes with ABS as an additional option, while the 114 comes with ABS Standard. The 114 has enough torque to pull a rhino with blue balls. From what I’ve learned, HD doesn’t measure in horses – just torque.    This is a remarkably capable bike. The first feeling that entered my head as soon as I jumped on was a feeling of power – the stance is incredible, foot control and handlebar position are in a neutral comfortable position, it’s a powerful looking bike, and you feel that power once you’re in the saddle both mentally and physically when riding. It has a very “Scrambler” feel to it and could in fact be labelled the closest thing to a Scrambler that modern HD have ever produced. 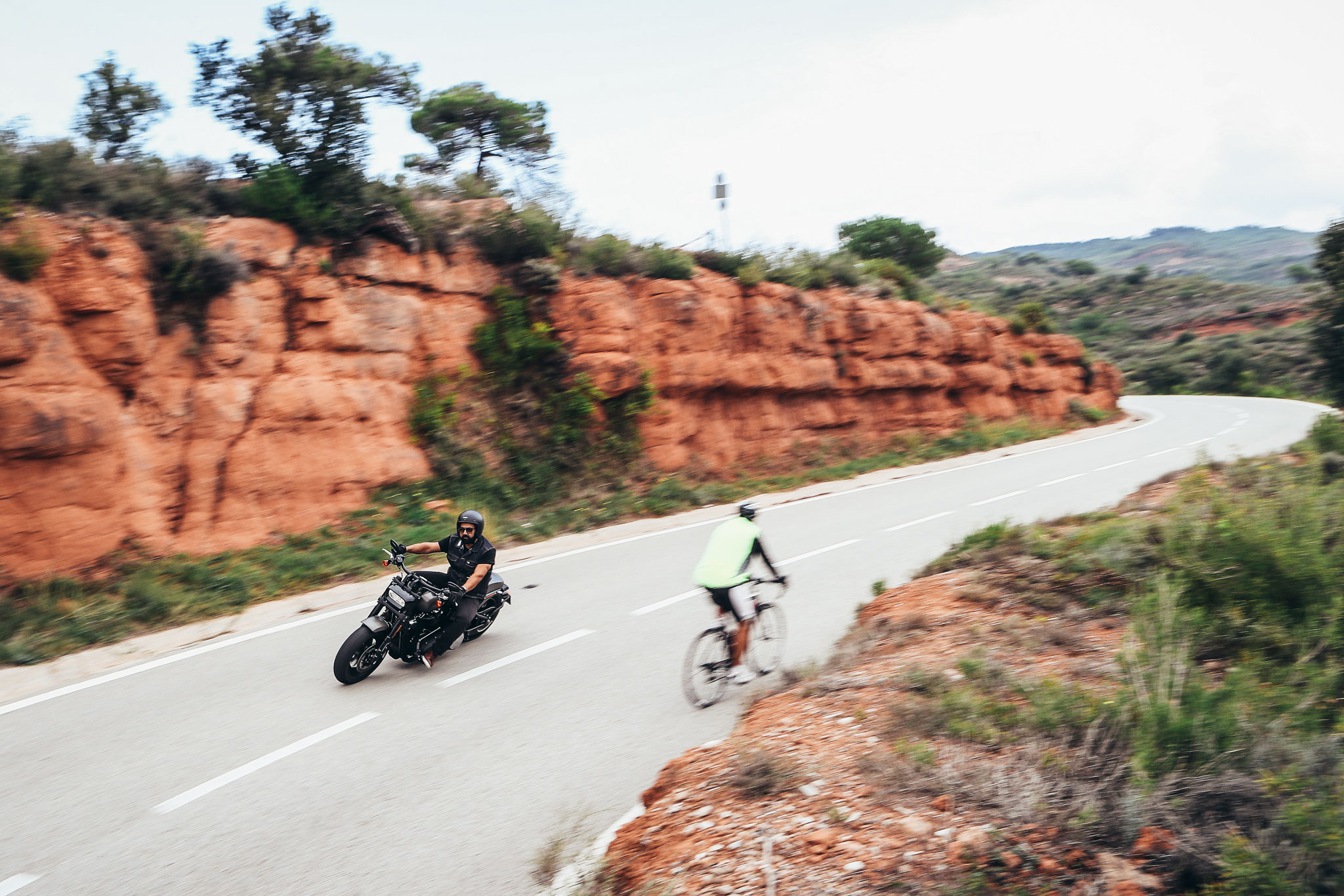 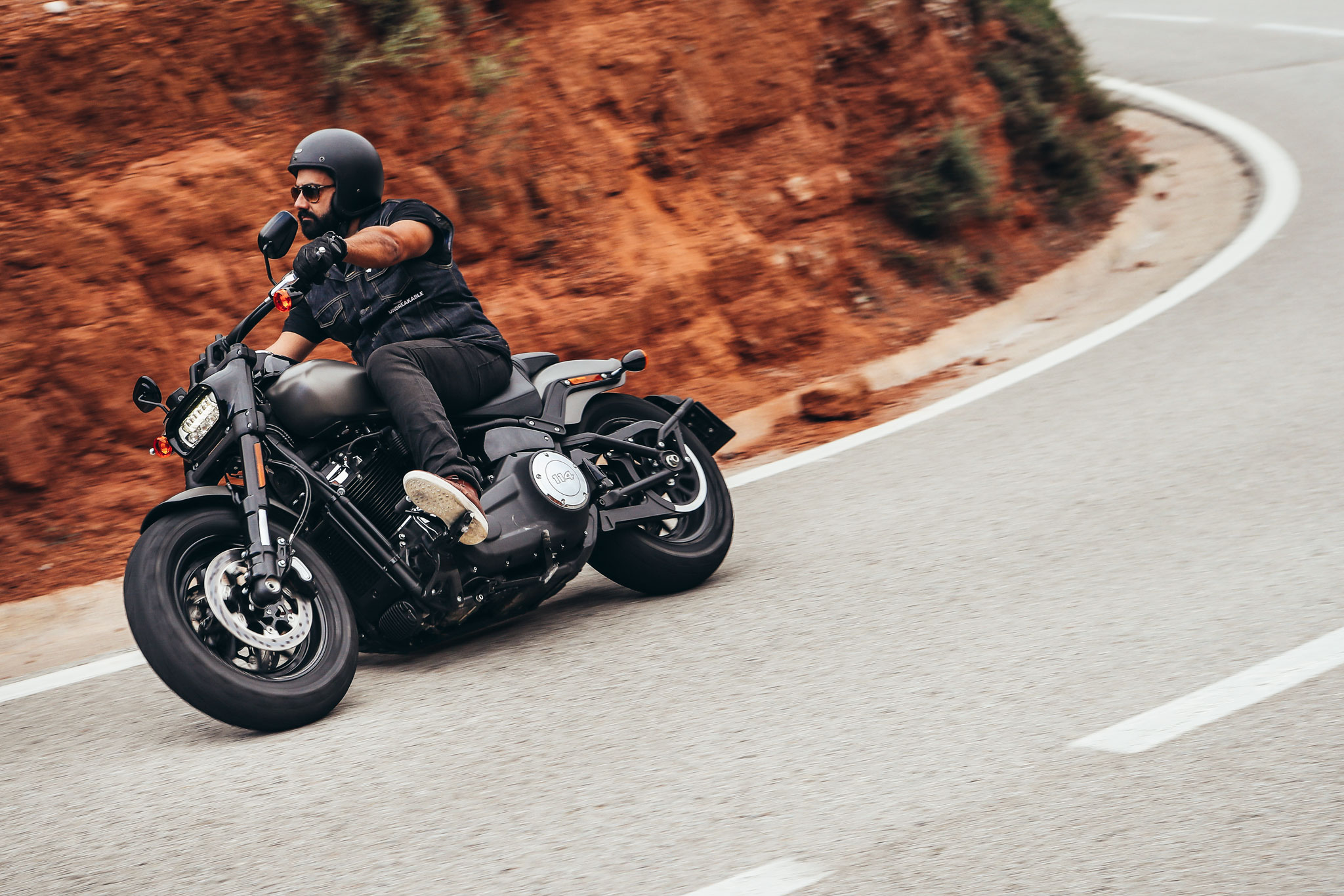 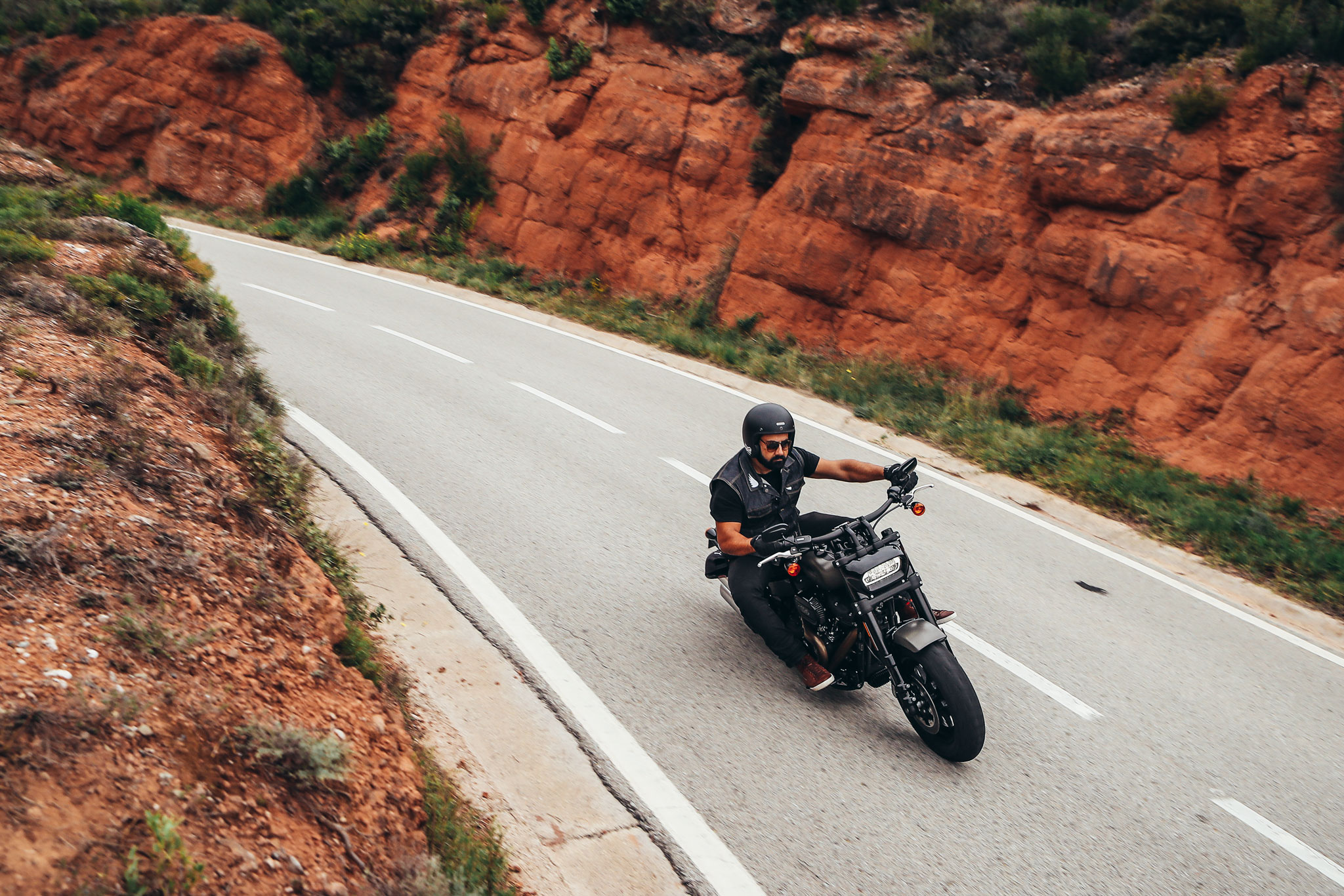 Hitting the twisting roads of the incredible Catalonia region of Spain (for now…) was interesting. Honestly, I thought that it would suck balls as the bike still weights over 300kg. I was happily proven wrong – what a fucking hoot! As all the other journos are enjoying the sound of their bikes scraping the ground, I was hanging off the edge, muscling the Fat Bob through the corners at enjoyably stupid speeds with minimal metal to road noise. To be honest, I hate the sound of scraping. It scares me – worse than Pennywise hanging in my local sewers.   This truly amazing “cruiser” is jacked up, meaning you can push this puppy harder than any cruiser ever built, and you’ll love it every thrust along the way. While the aesthetics of this bike aren’t for everyone, the additional clearance is an absolute blessing for those who enjoy “not cruising”. It is a bike that, within their line up, is built for those twisty corners which is not something you ever expect from Harley-Davidson. The kid’s done well. 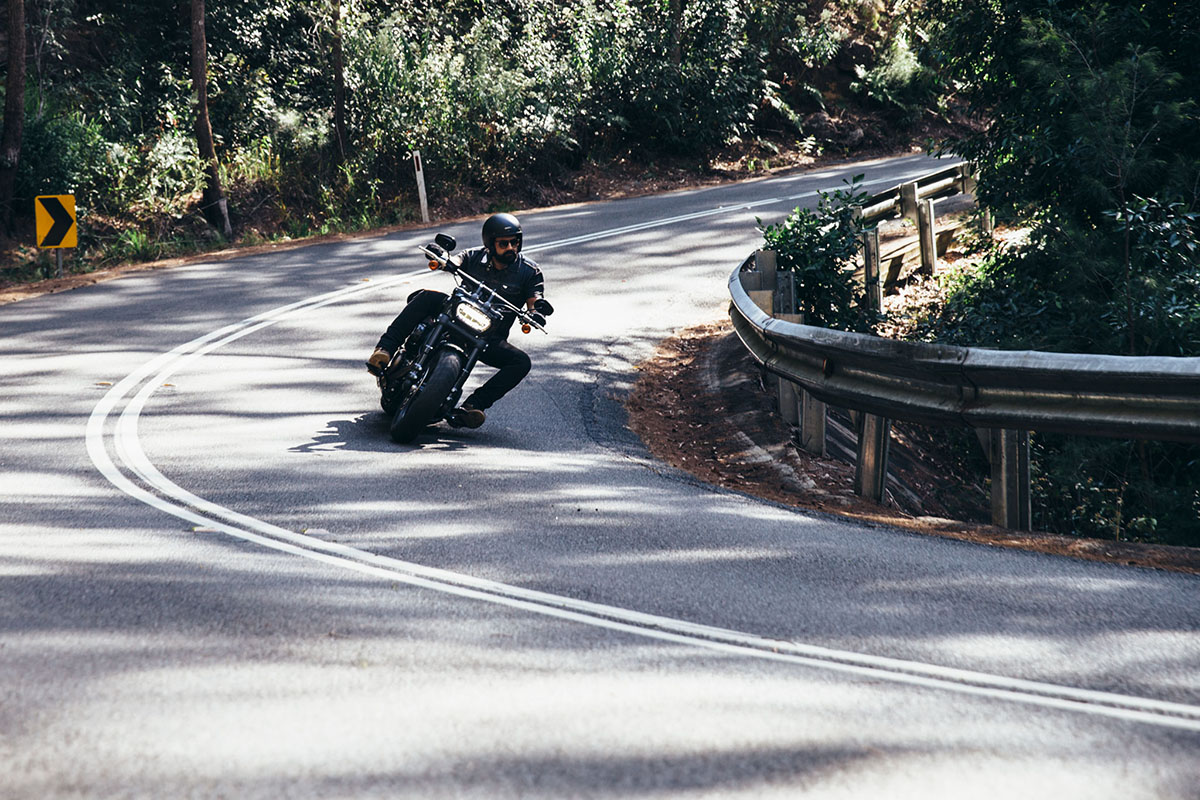 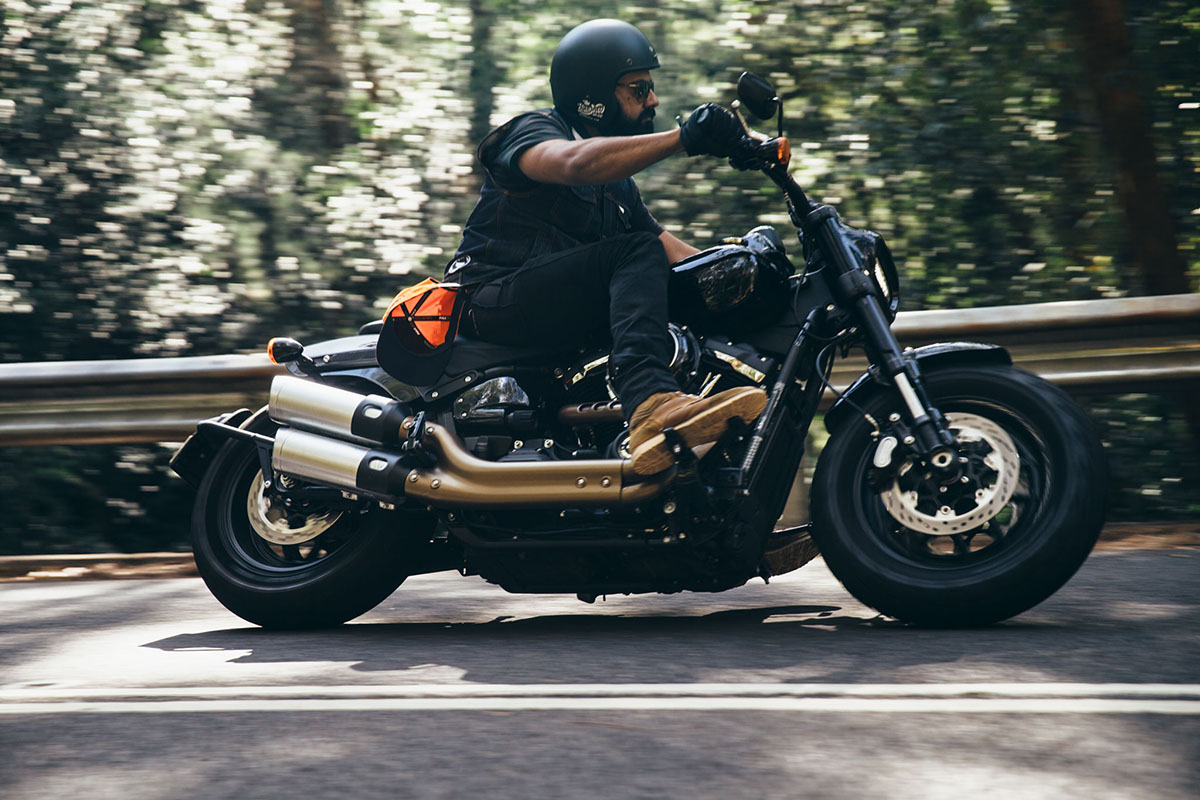 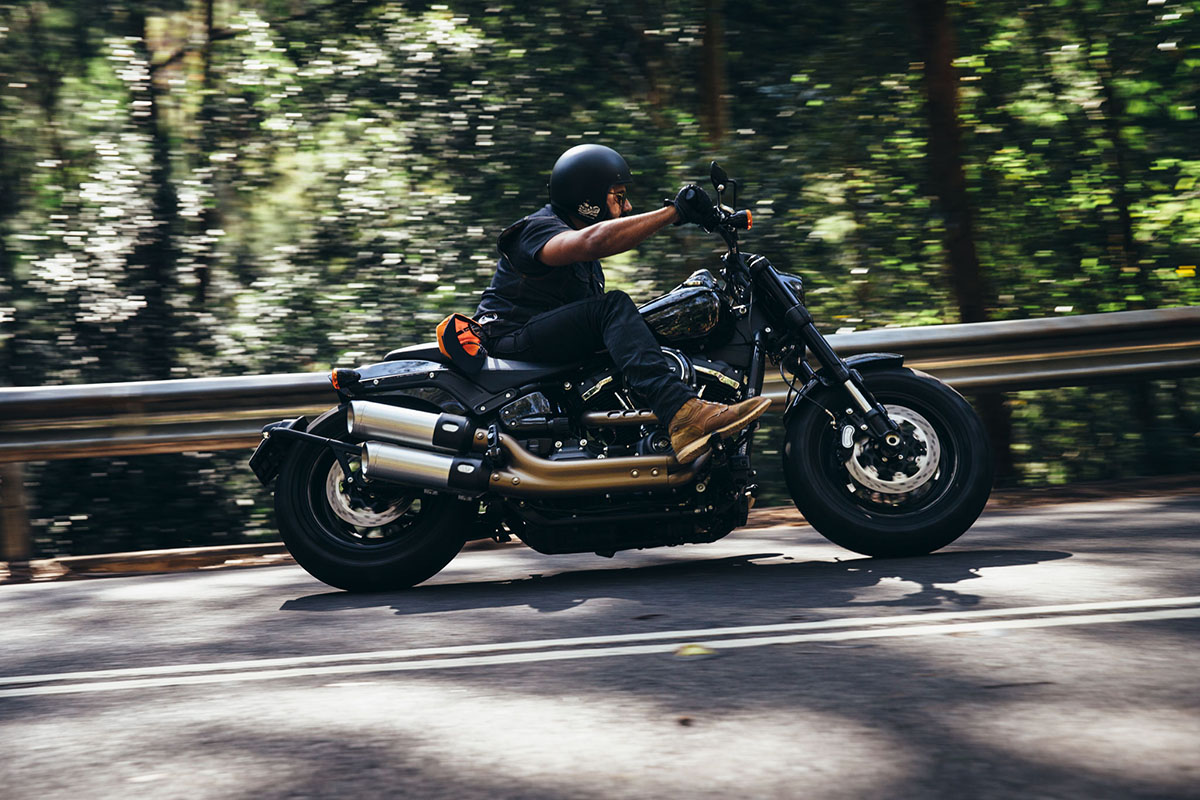 Despite it’s chunky appearance, it is deceptively aggressive and has been designed this way by HD intentionally. The single cartridge inverted forks, dual disc front brakes and a performance inspired 2-1-2 exhaust system shows how this bike breaks from its cruiser label.   The bike’s got plenty of stop as well, with ample braking provided by 4 pot twin disks. Would this be sufficient once I extort the bike off HD and lock in some stage 4 engine mods? Only time will tell. As the bike is, it’s got brawn, it’s got handling, and the power to get any rider’s blood flowing. This is just the base model, bear in the mind. It has yet to be offered to the Gods of Custom to be rebuilt into a truly exciting custom machine. Which could really be done with ease as well considering the entire rear subframe can be removed with just 4 bolts! This is a modular machine that will provide those metal bending, welding, rolling freaks with the perfect blank canvas to experiment with. It’s these possibilities that excite me the most and we will endeavour to cover those bikes as they are being built. 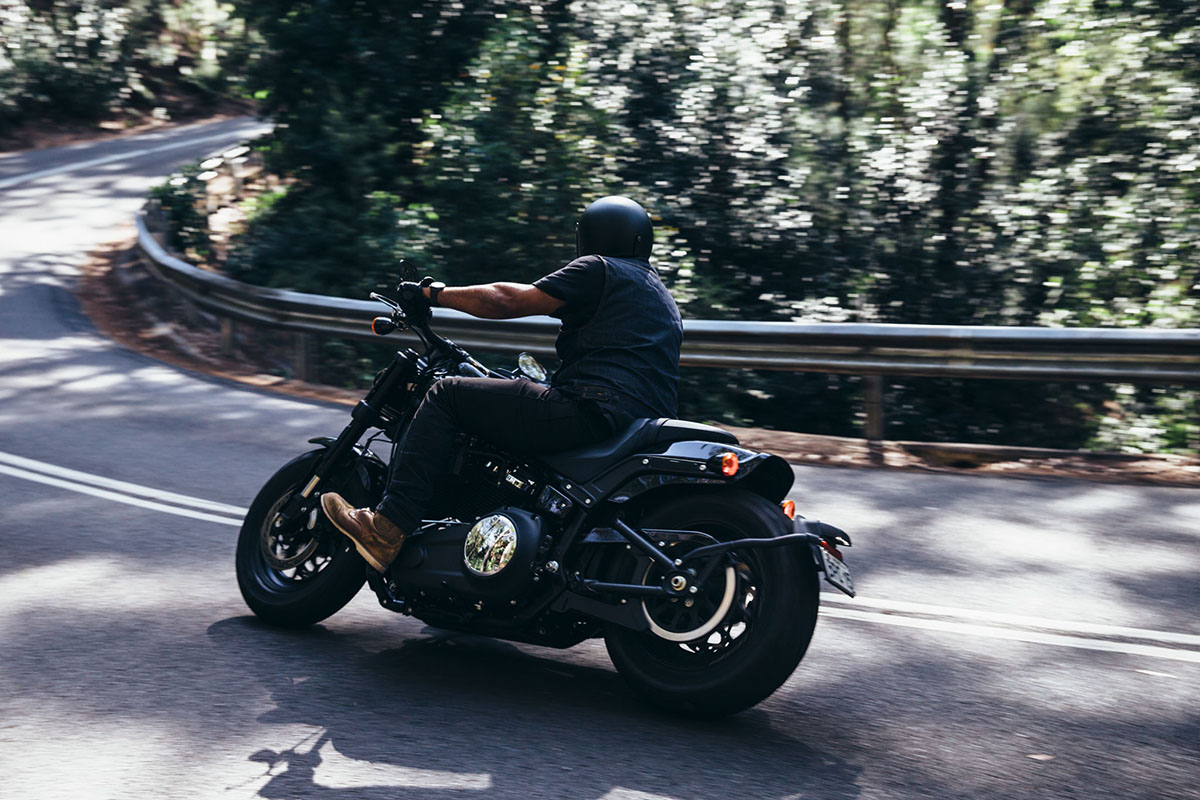 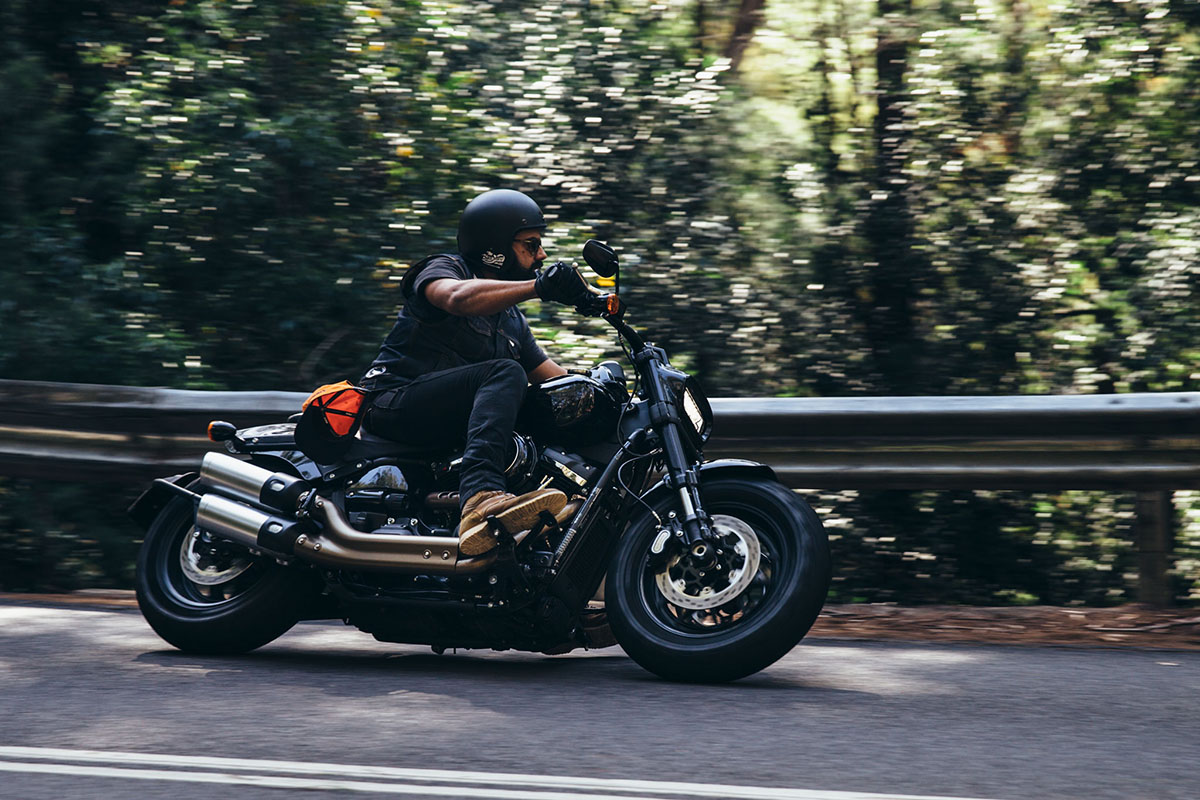 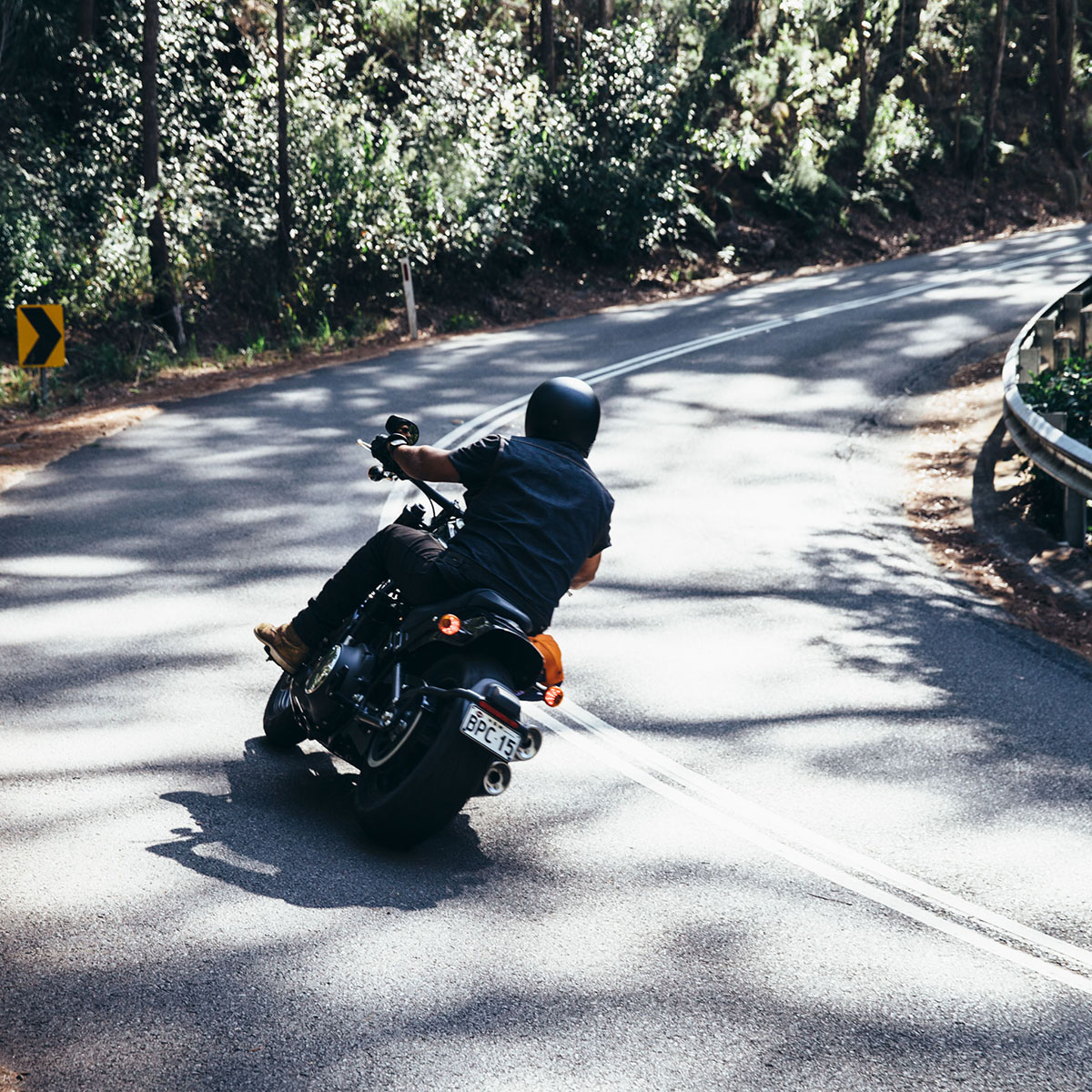 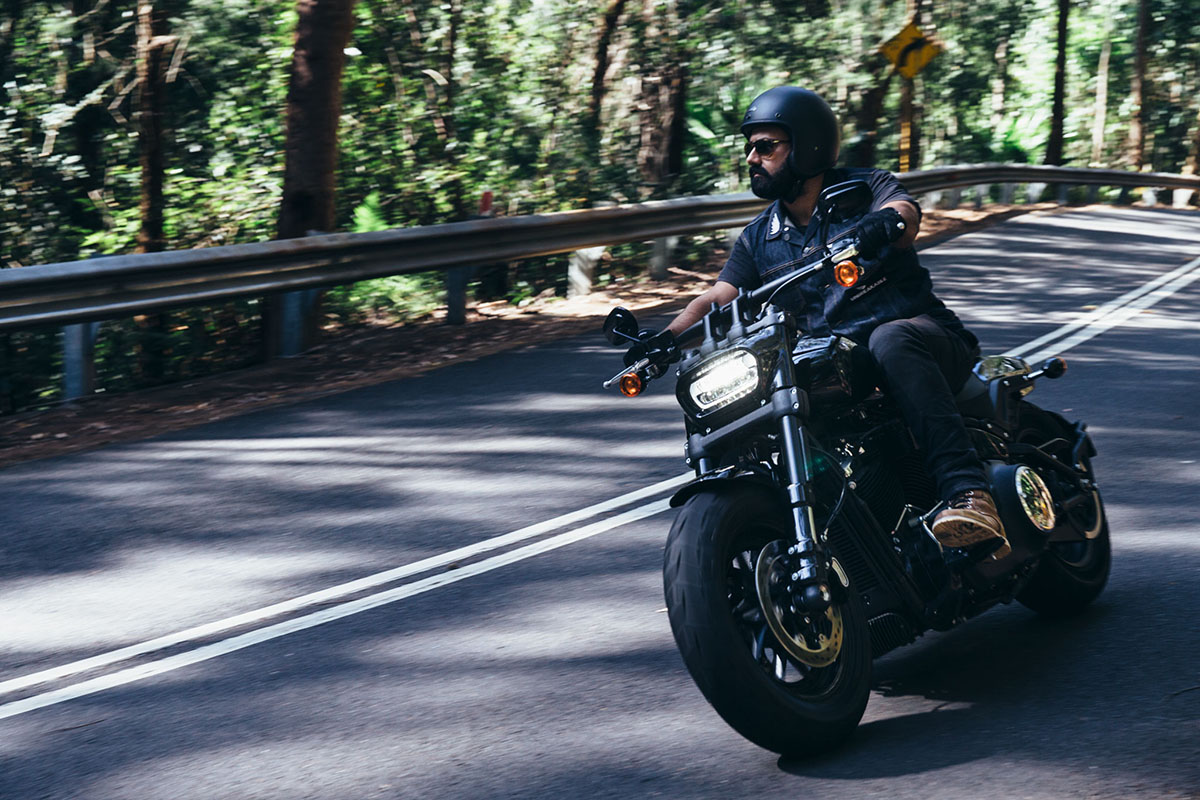 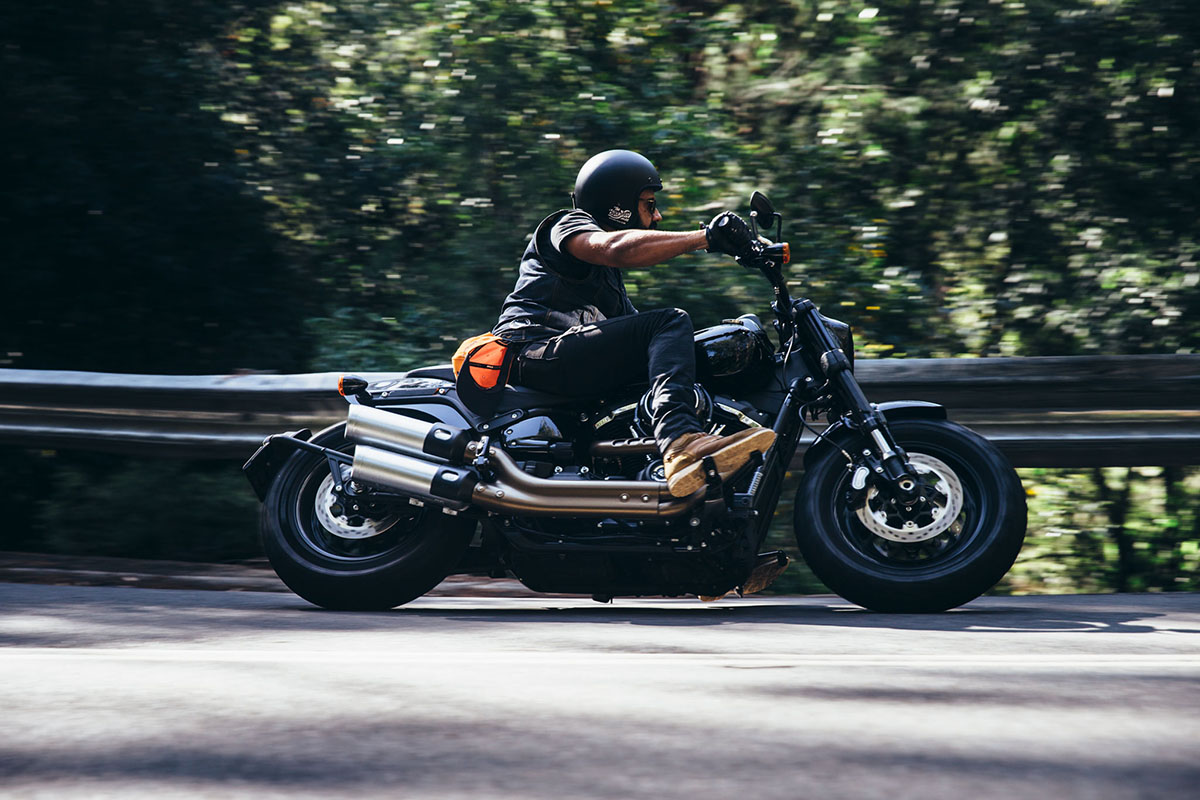 Mark wears: Whatever clean clothes he has while riding