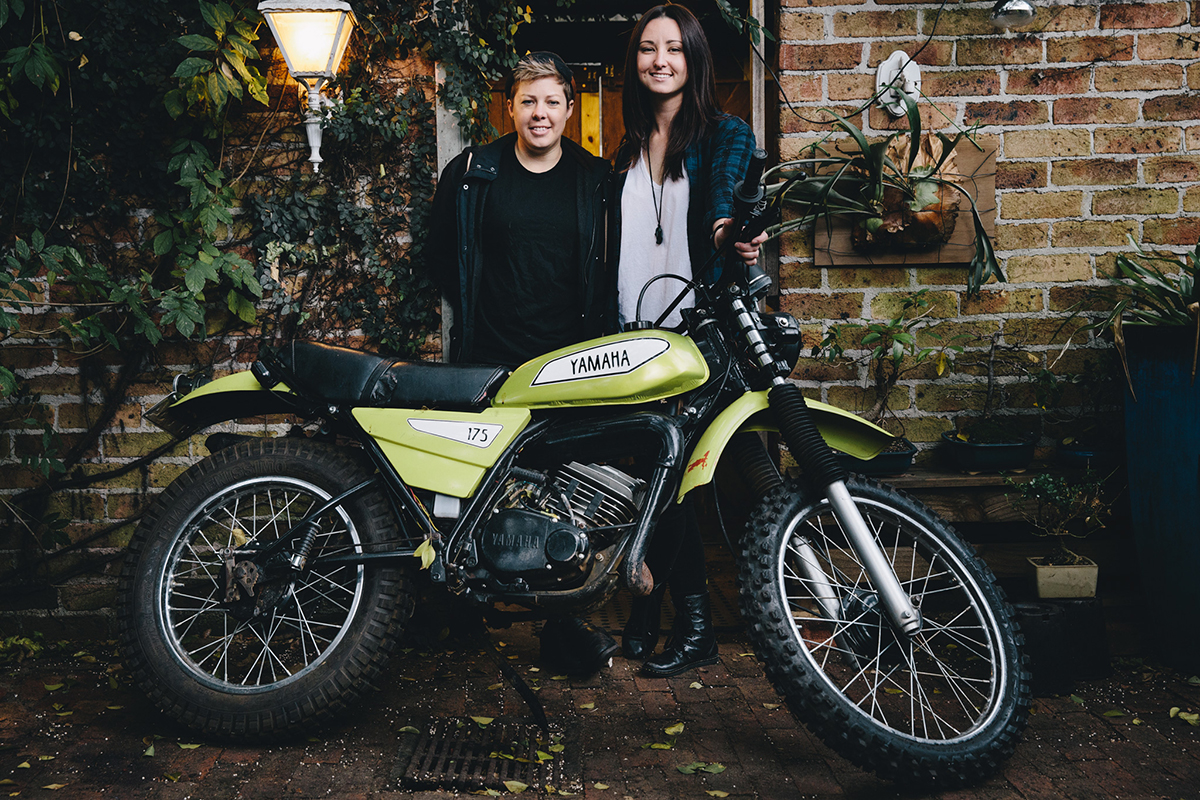 Warning: The following post contains images of a cute dog that will have you making very emasculate sounds.

Welcome to Kim & Kiera’s home, a place that they moved in to for the magnificent shed and courtyard space – despite keeping their bikes often parked out the front.

After a good friend set off to get her rider L’s, Kim followed suit to see what all this two-wheeled fuss was about. Fast-forward to today, and that friends licence has long since expired whilst Kim’s bike collection has only grown, and she’s roped in another along for the ride. The first time Kim and Kiera met, the topic of bikes was on the table. Kiera had always wanted to ride, and now was the time. Two years later and the passion for two wheels has thrived between them, whether it’s riding on the roads or wrenching in the shed. 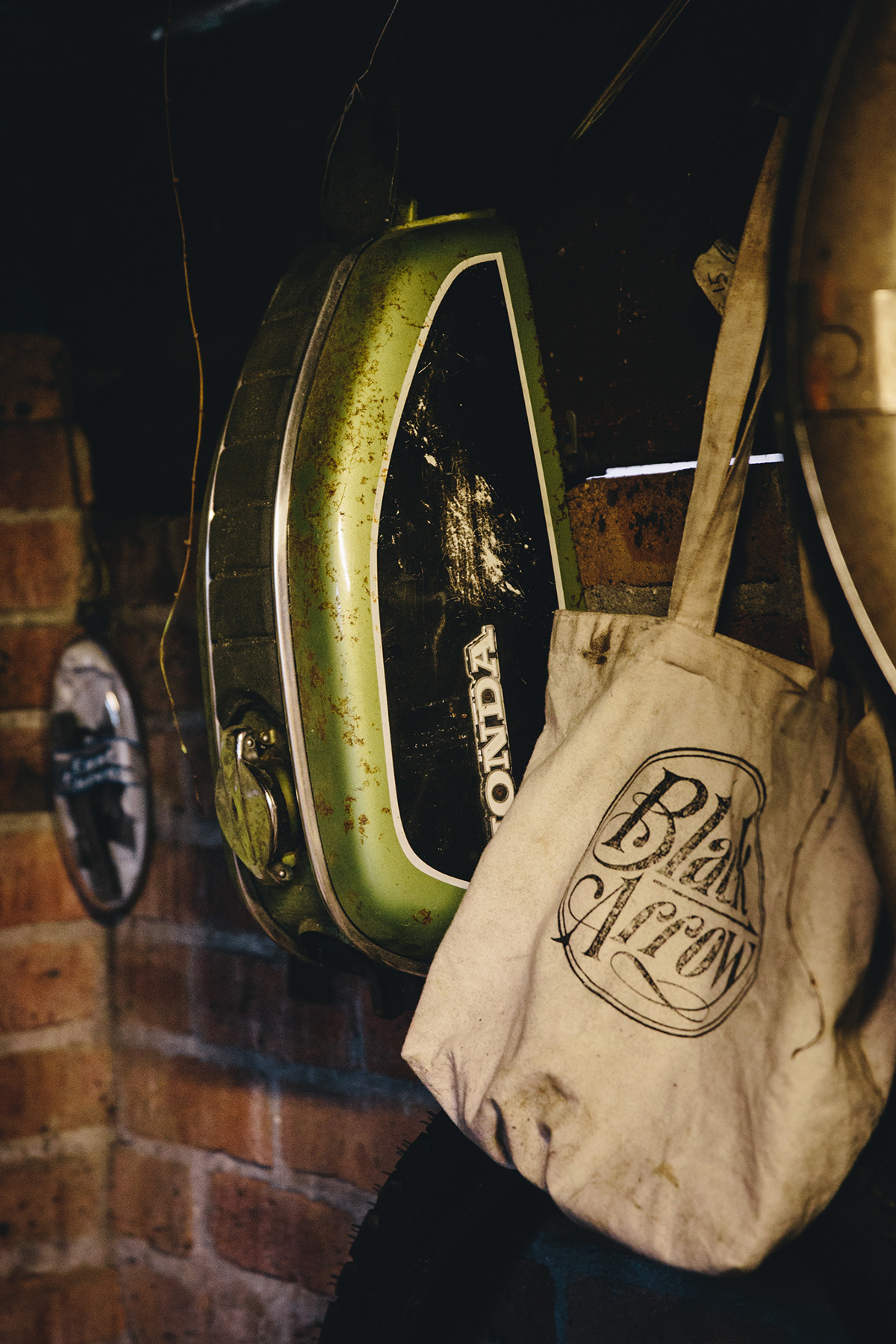 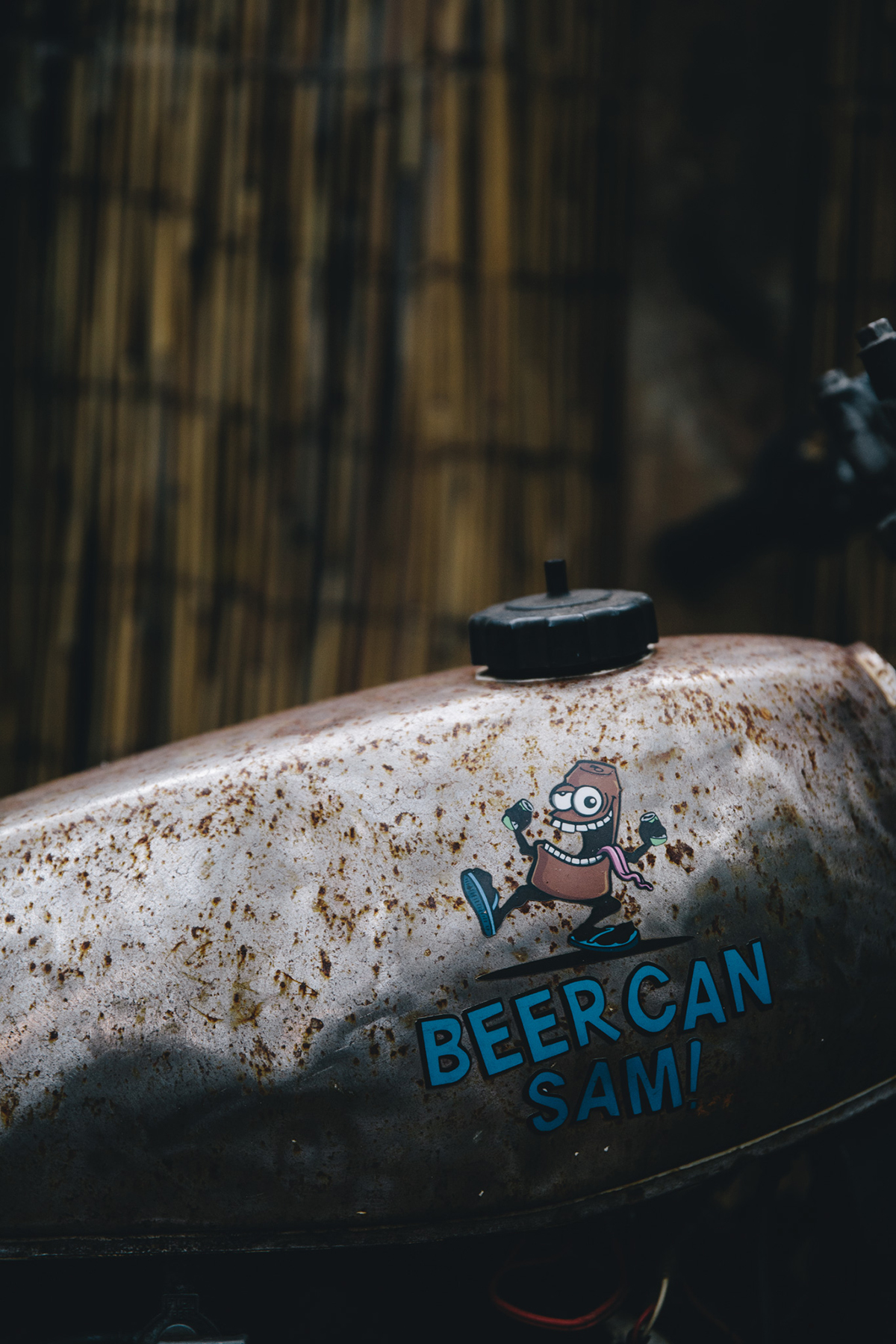 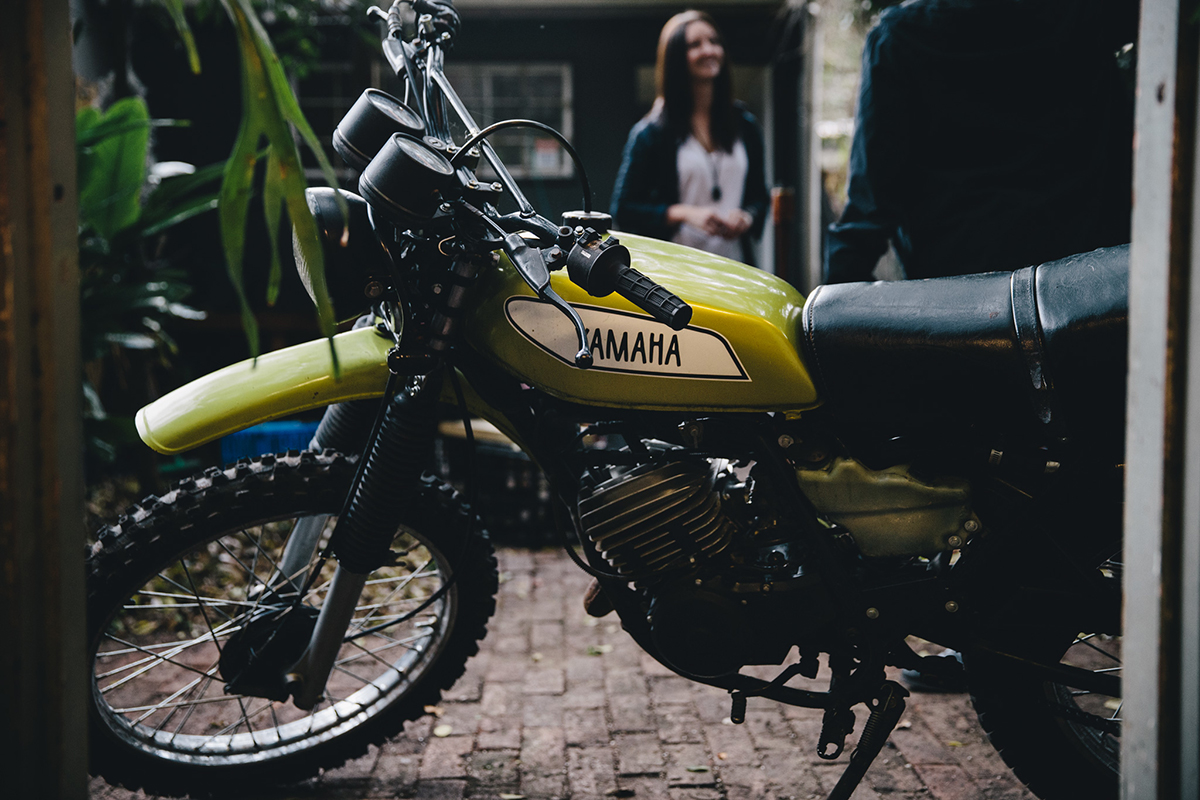 While searching for a new place to call home, Kim & Kiera came across the perfect abode, complete with a shed to work in, courtyard to keep the ever-growing number of bikes and laneway access. “We only moved into this house because of the shed and back courtyard!” Says Kim, though she then admits that despite this, some of their bikes are lazily parked in the street out front collecting fines. 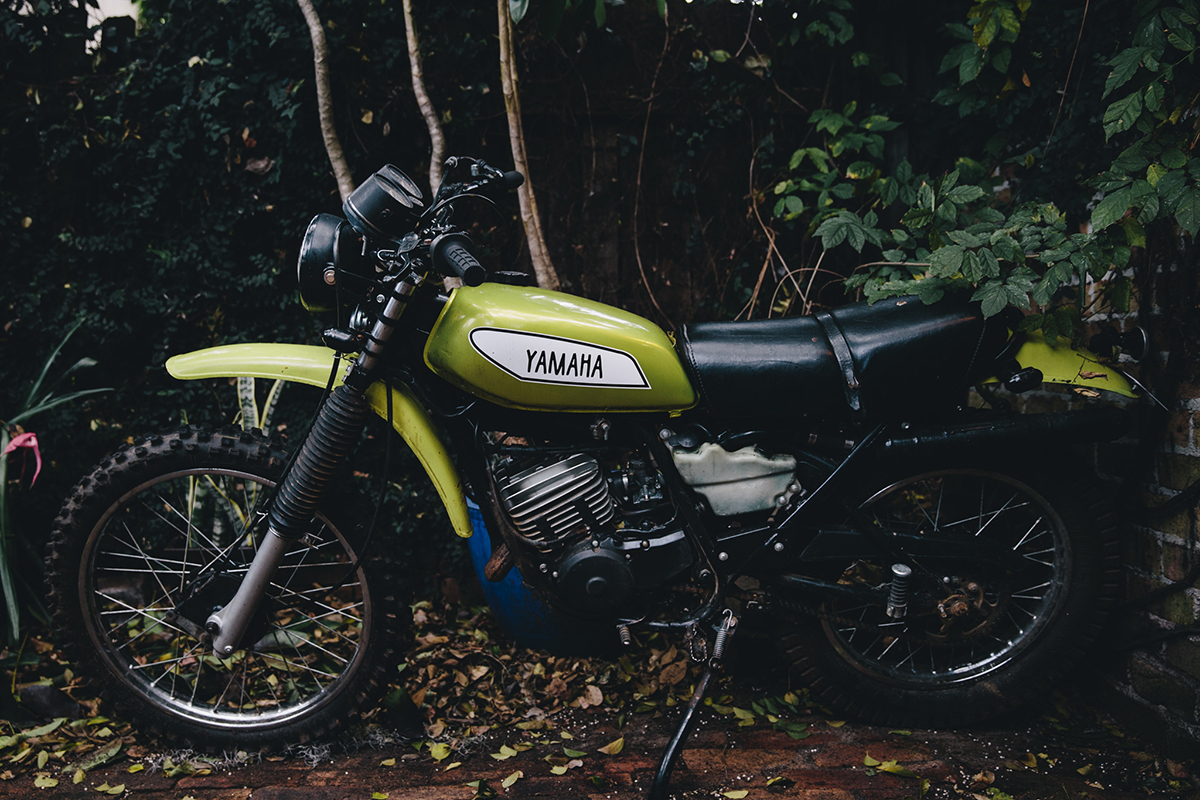 “We spend a lot of time out in the shed with our friends working away on our bikes – whether it’s painting and giving the machines a makeover for Aftershock or cleaning carbis to make sure the bikes are running” Says Kiera. “I have a few things I want to do to my RD. I’m keen to chuck some rear sets on, but I’m sure it won’t be long until I need to do something with the engine. Bloody two strokes!” 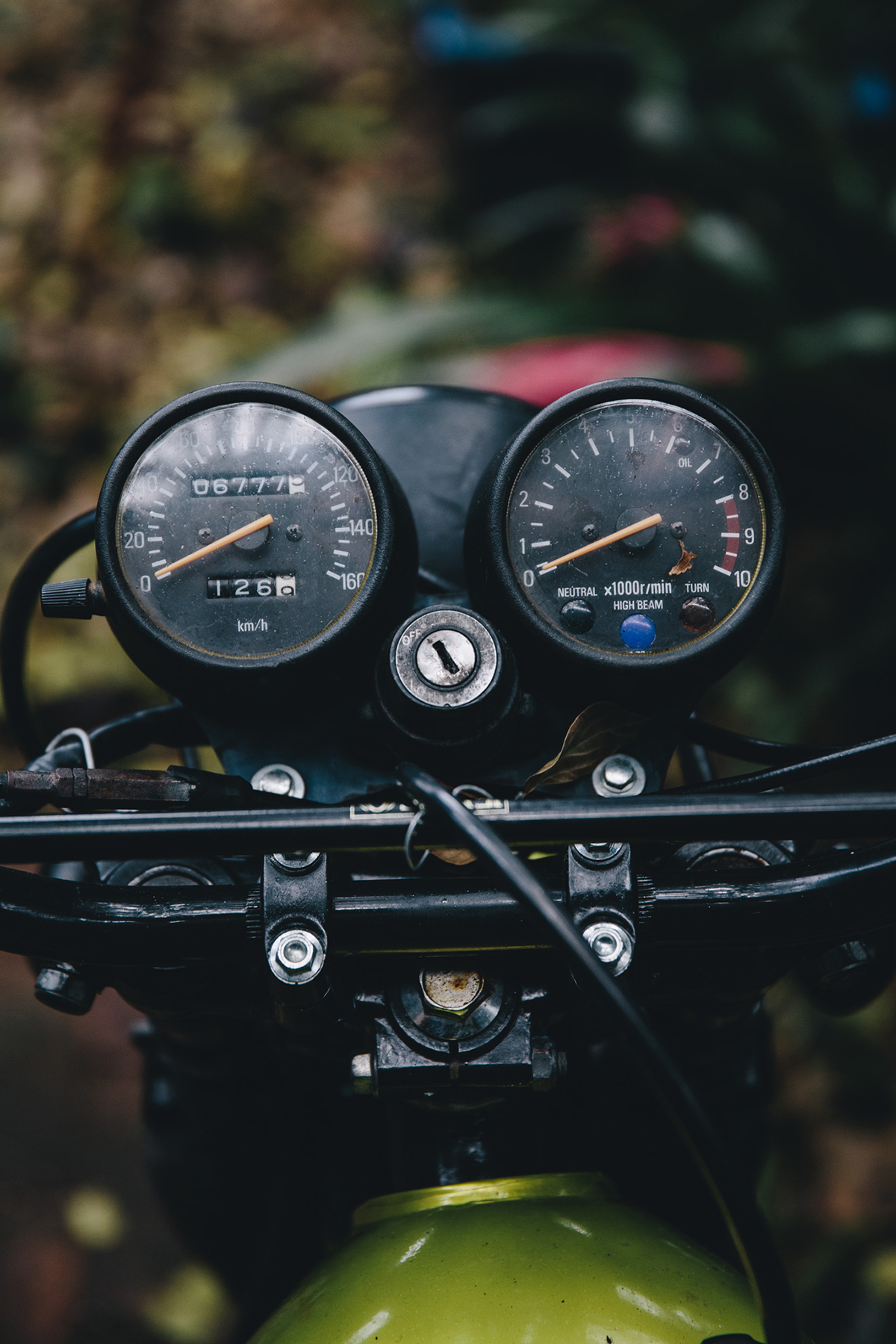 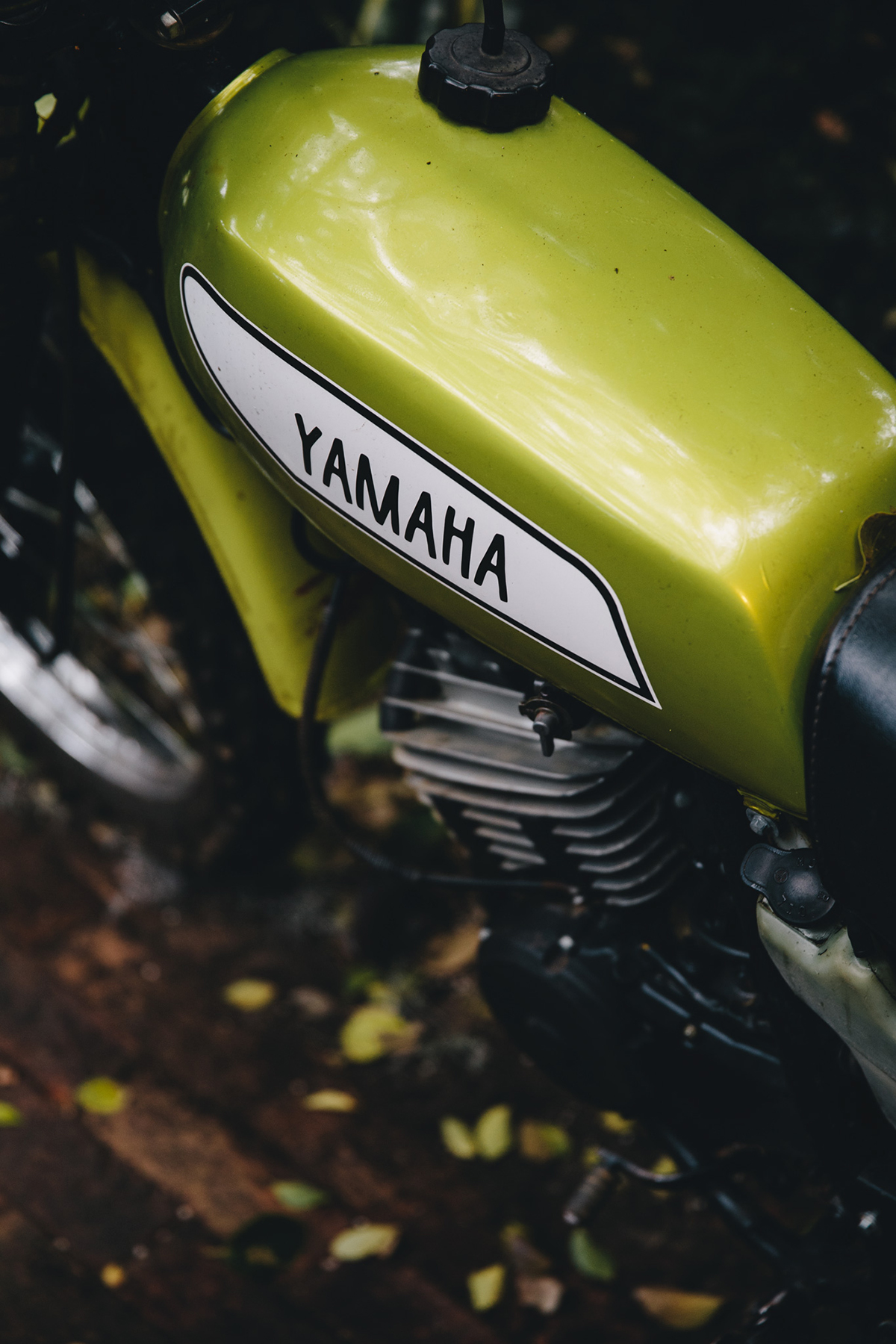 In the lead up to bike events such as Aftershock, Sunday Slide, The Distinguished Gentleman’s Ride and whatever else is on you’ll find Kim & Kiera’s space abuzz with work, as friends will swing by to lend a hand or work on their own rides. “We can spend a LOT of time our there, which is mostly due to us still learning from friends and figuring things out. The night before Aftershock, Beer Can Sam’s carbi was on the bench in many pieces in a last minute stint to get him running. Actually, Beer Can Sam was re-born here recently late one night with our friend David and I tinkering away. It was a very exciting moment when it finally kicked over!” – Kim 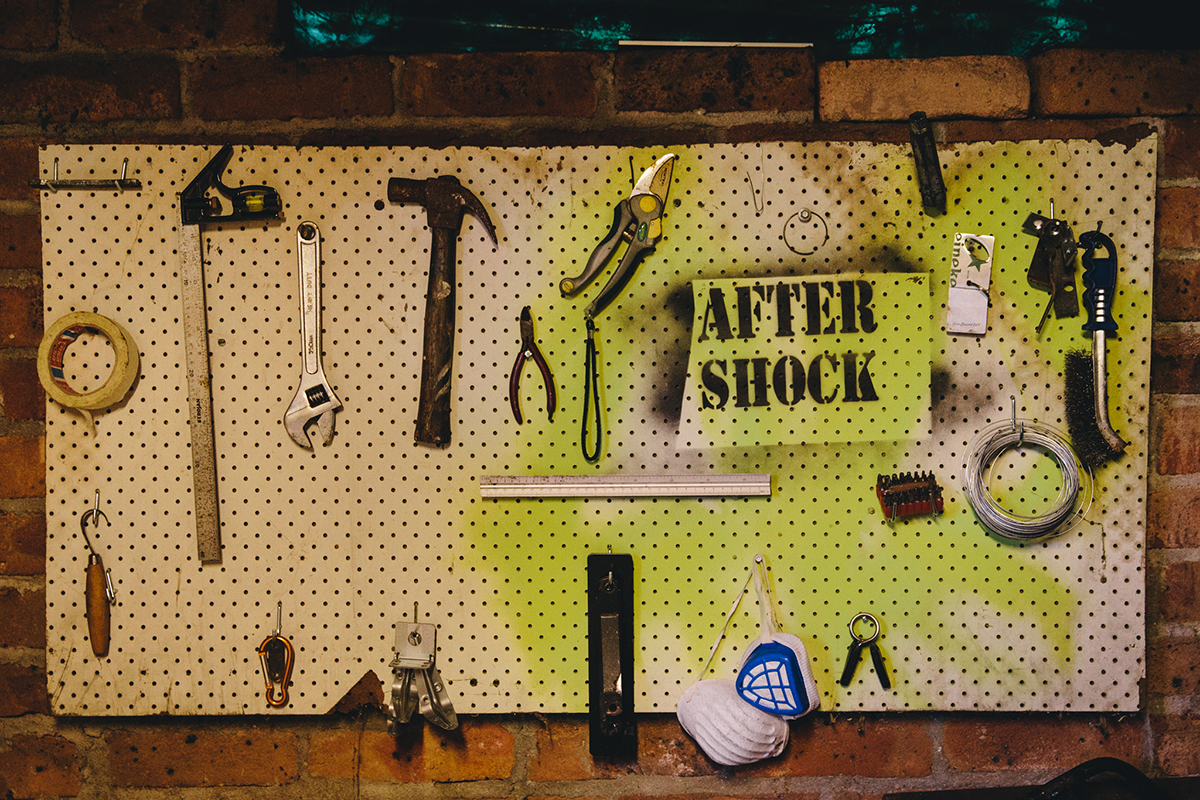 Kim & Kiera seem to always have had troubled bikes, which whilst painful at times it also serves as a learning tool in furthering their knowledge of bikes, and adds fuel to the fire as their desire to learn more rages on. “We learn things every day, and a lot of that is from pulling things apart and just giving it a go” 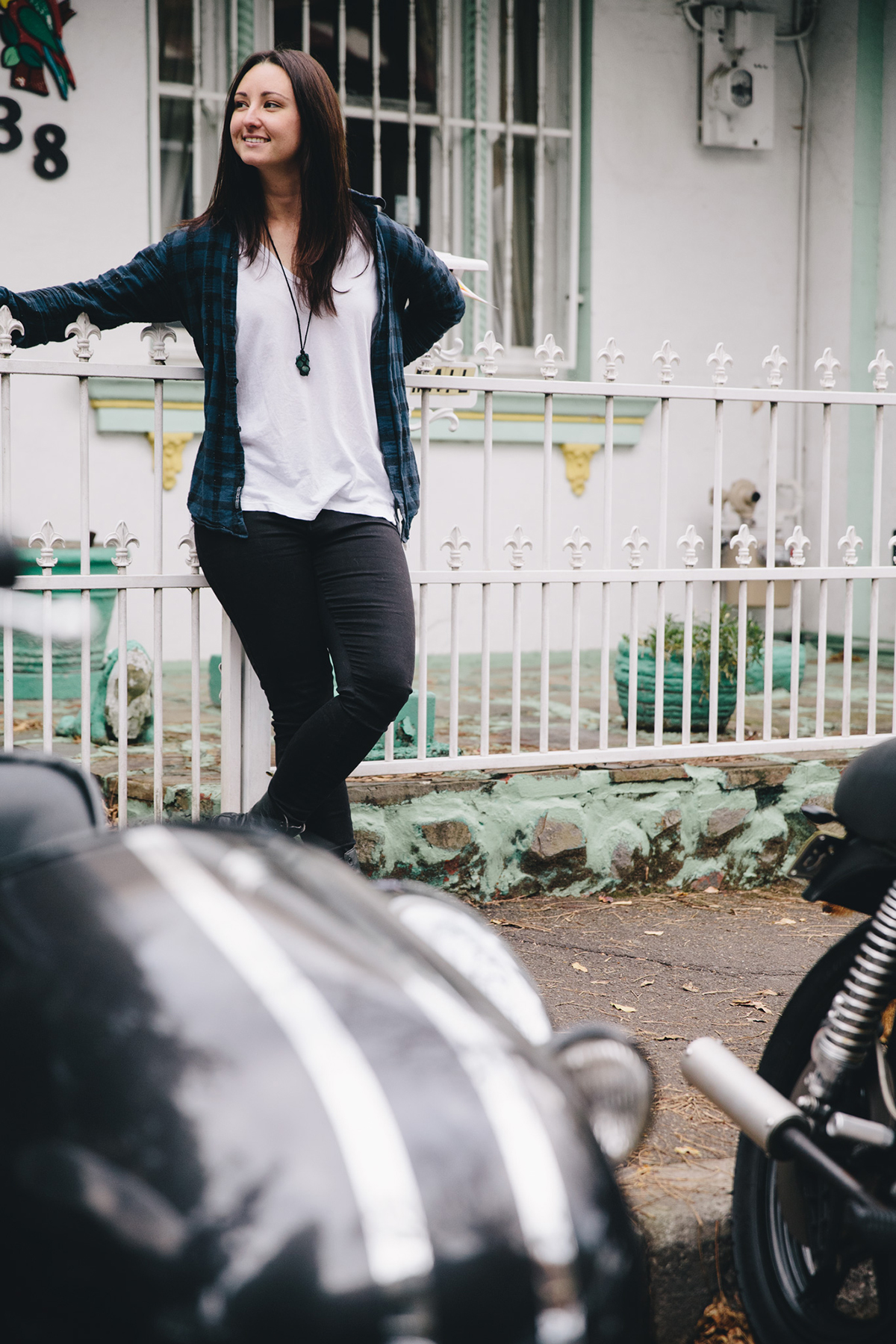 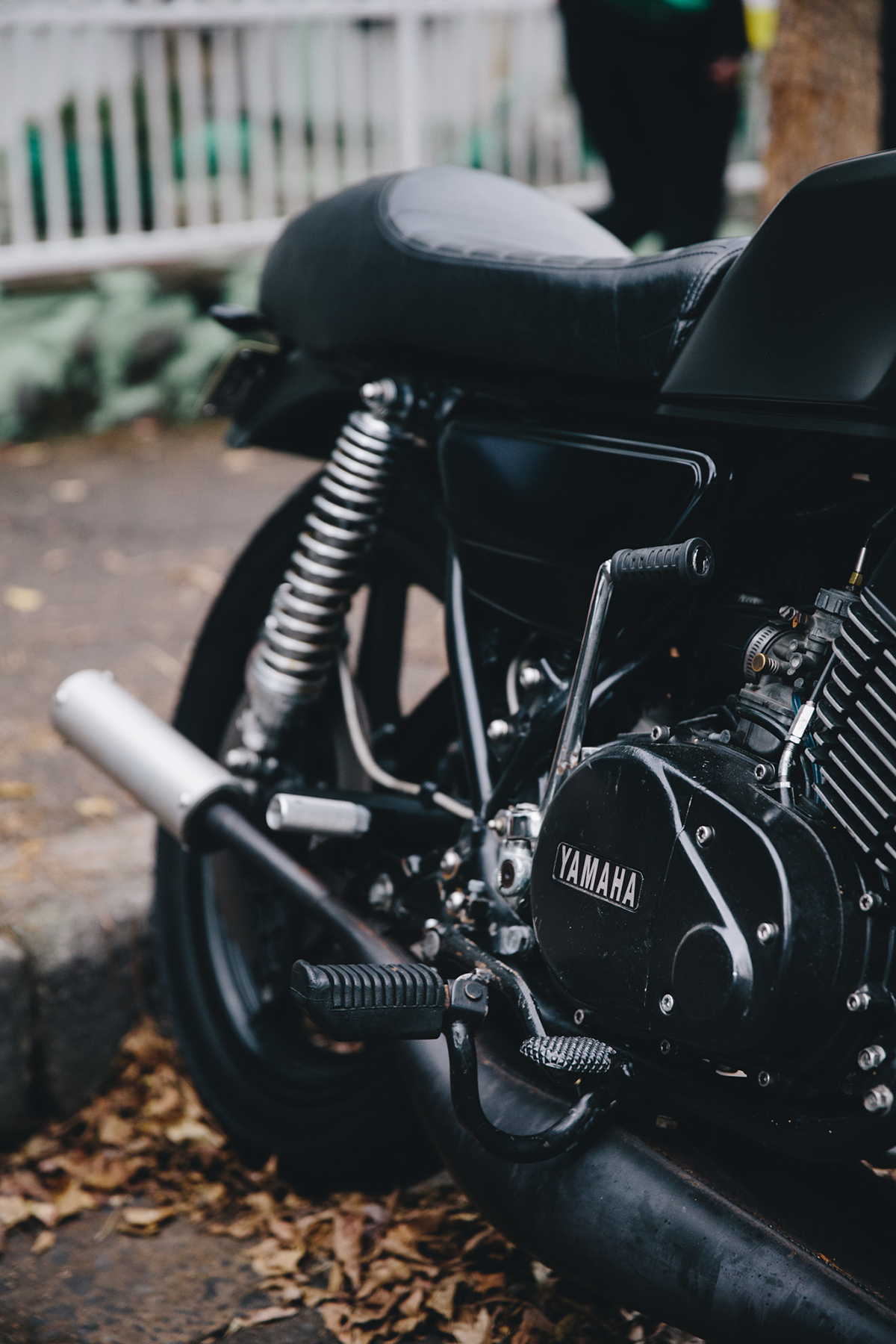 “I wish I had more time for all the projects I’m working on out there. To be honest, it’s sometimes left in such disarray that there’s no chance of even getting in the door.  There is always something going on under the layers, like spoon carving or random wood projects. Even just organising things in the shed and tending to the overgrown garden is fun. A perfect weekend is spent out there with Tavin the dog, a few beers and some tunes regardless of what it is we are working on. I have developed a bad habit of never throwing anything out… especially nuts, bolts, any bike parts.” – Kim 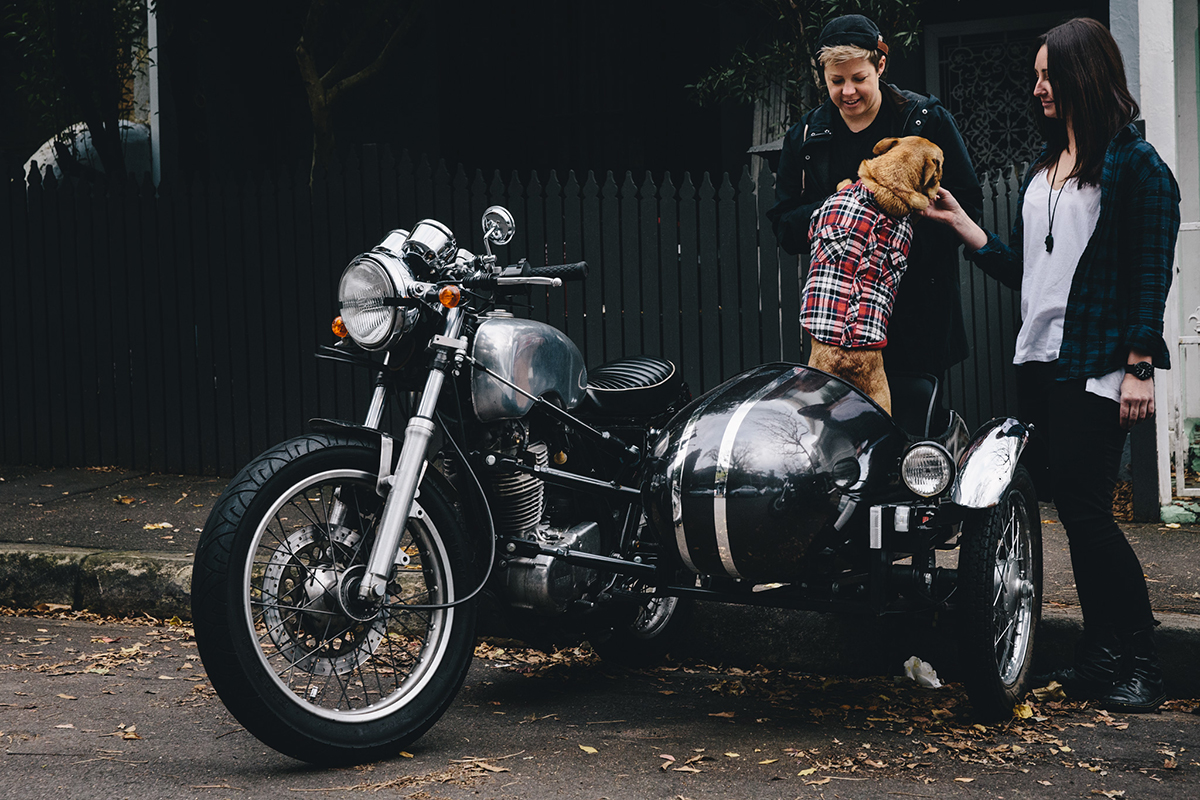 There was still one member of this family to join the ranks of riders – Tavin the dog! This sweetheart of a pooch was picked up from the Animal Welfare League back in 2009, and despite a troubled start to life he’s a happy little fella that loves going for a ride in the sidecar of Kim’s SR400. “He goes everywhere we go. I couldn’t bare to watch his face as we rode off on an adventure, which is why I began the hunt for Tav’s sidecar. I searched for months and months, had many issues but finally found the right one and now Tav gets to come along for rides in his very own sidecar!” 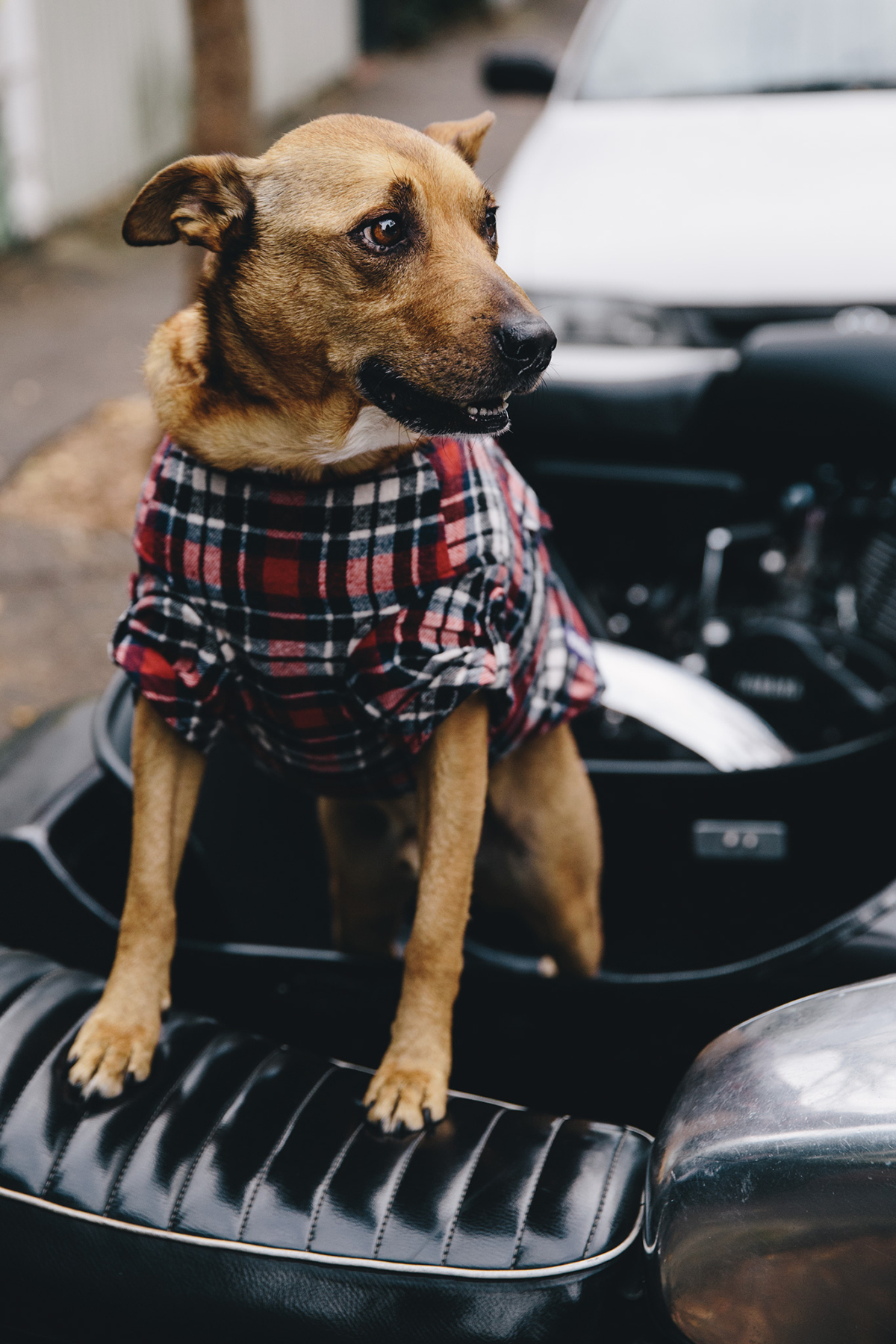 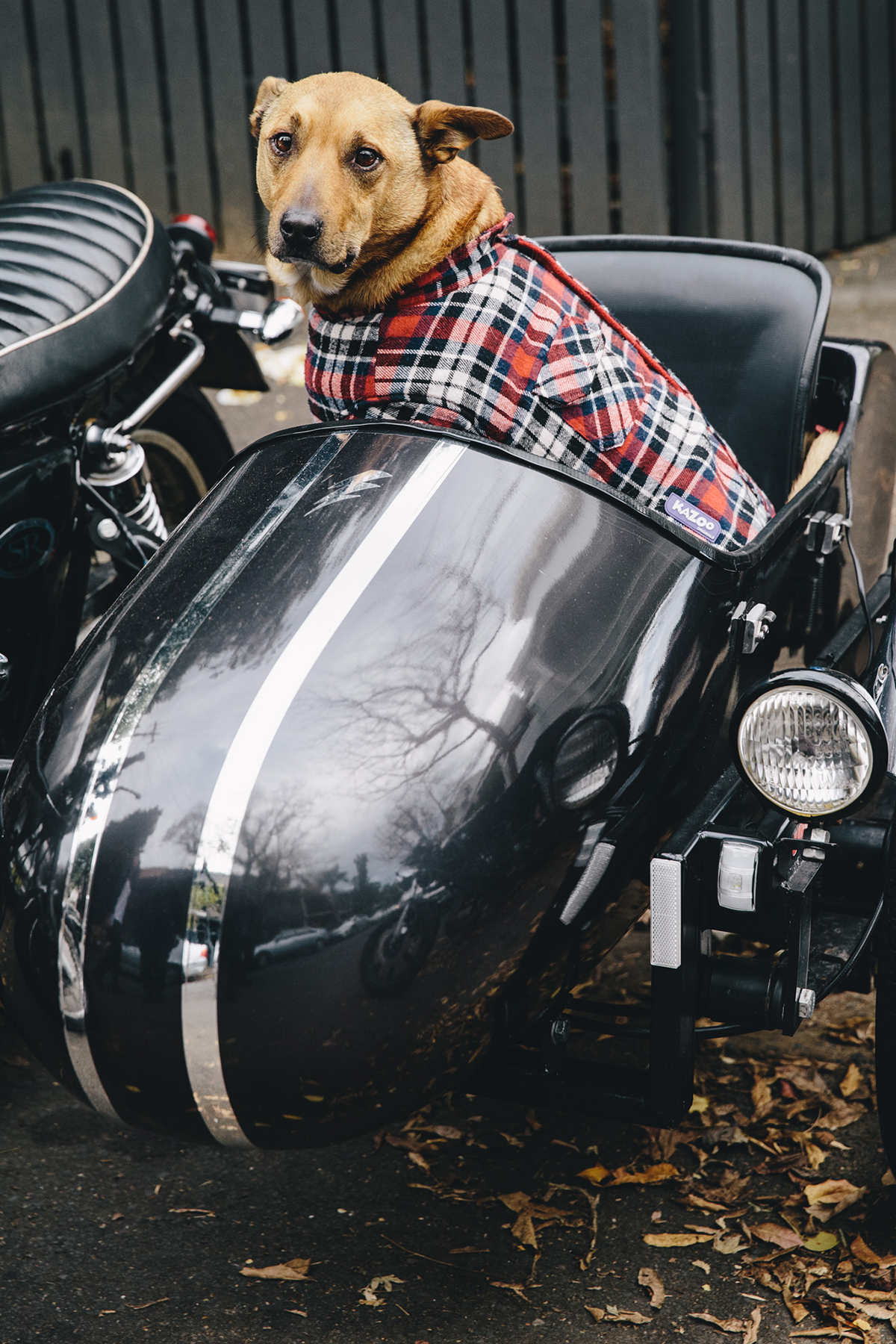 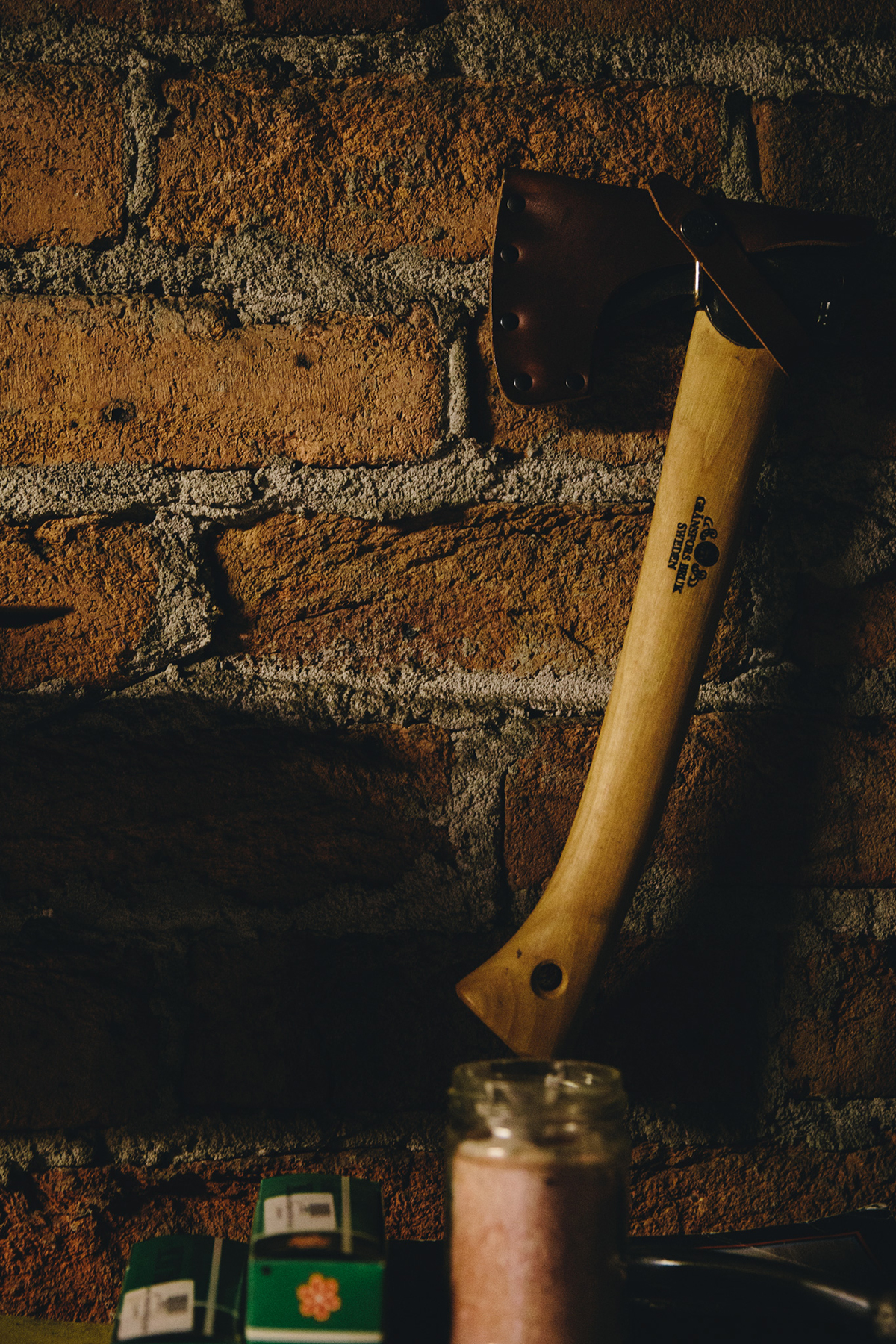 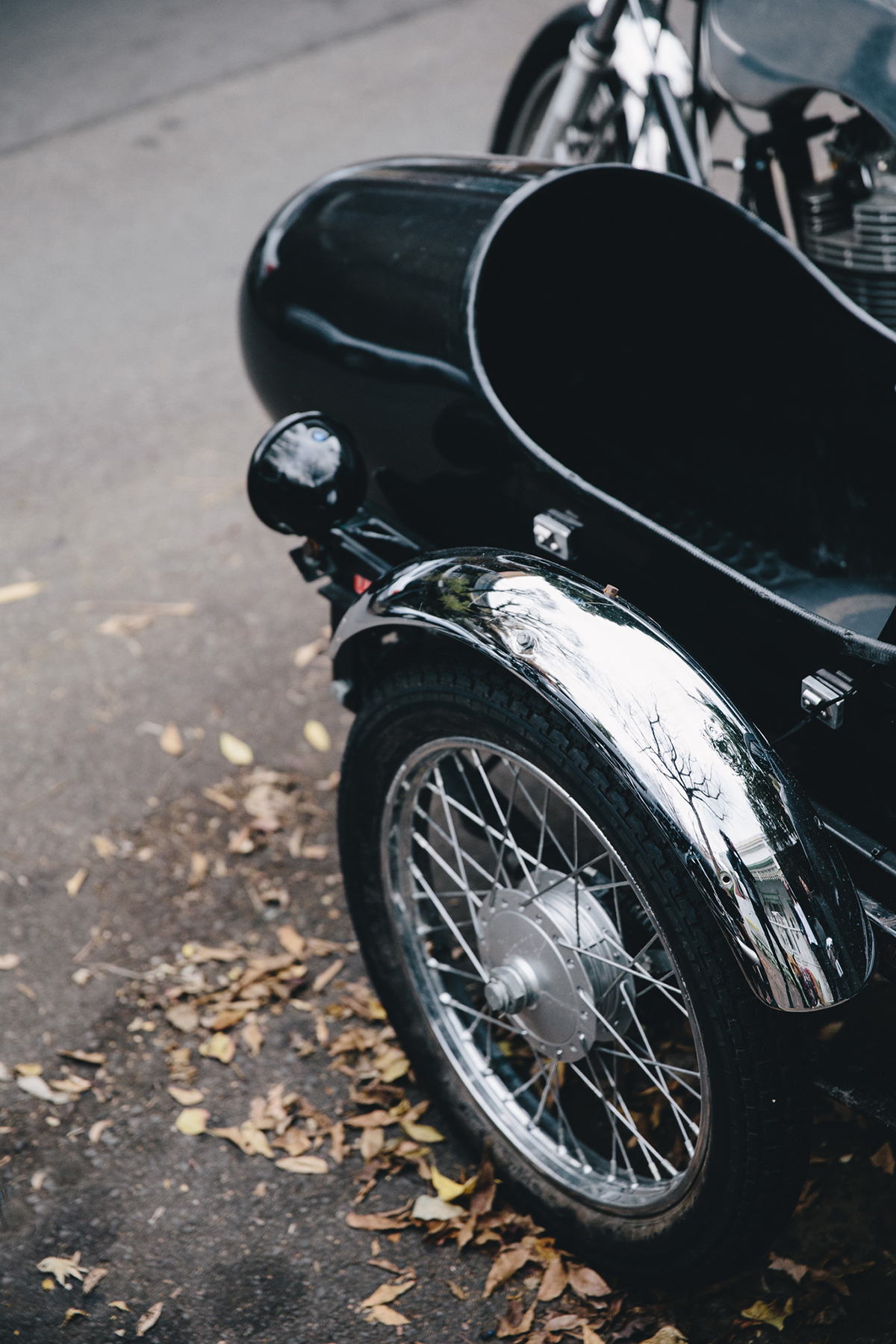 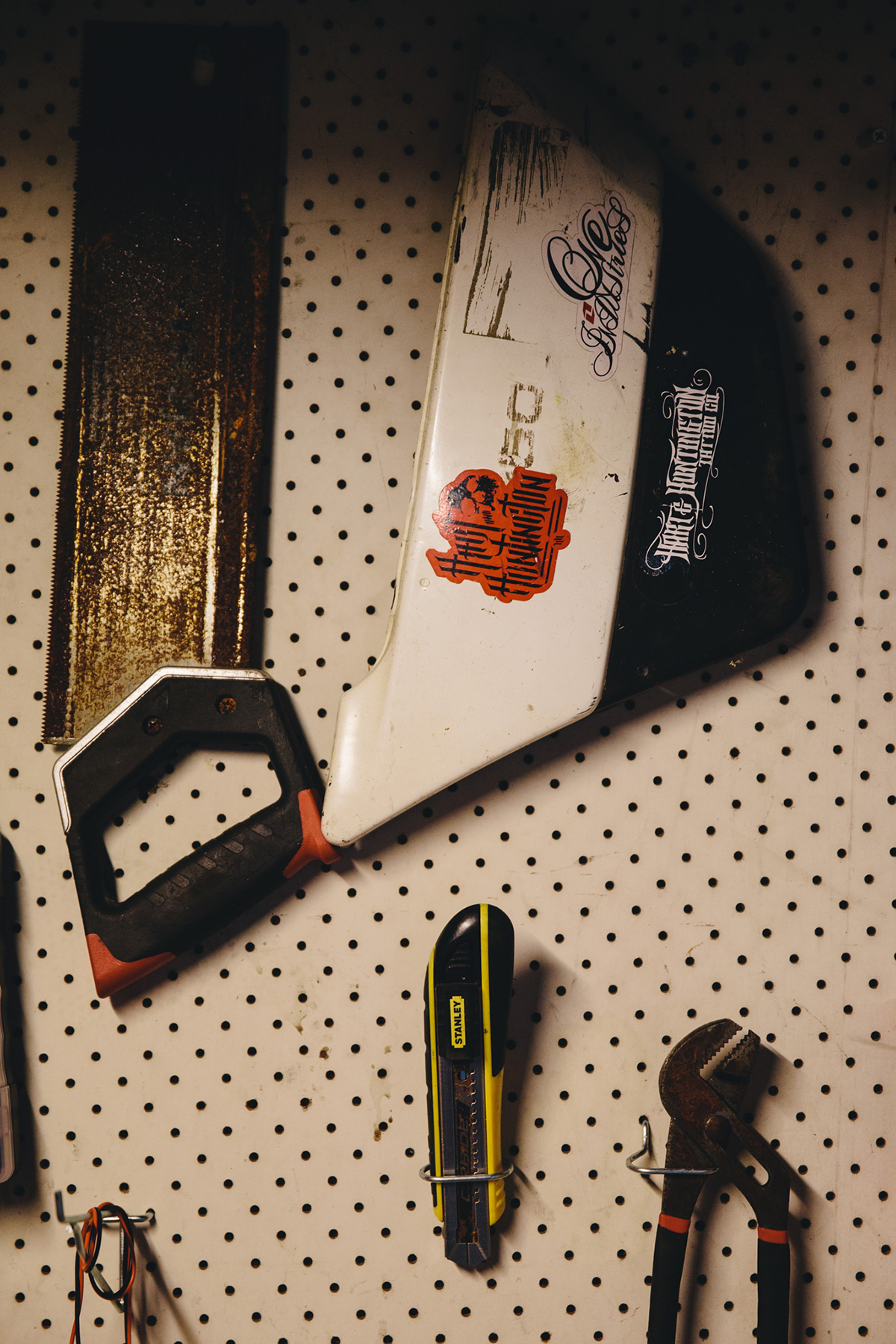