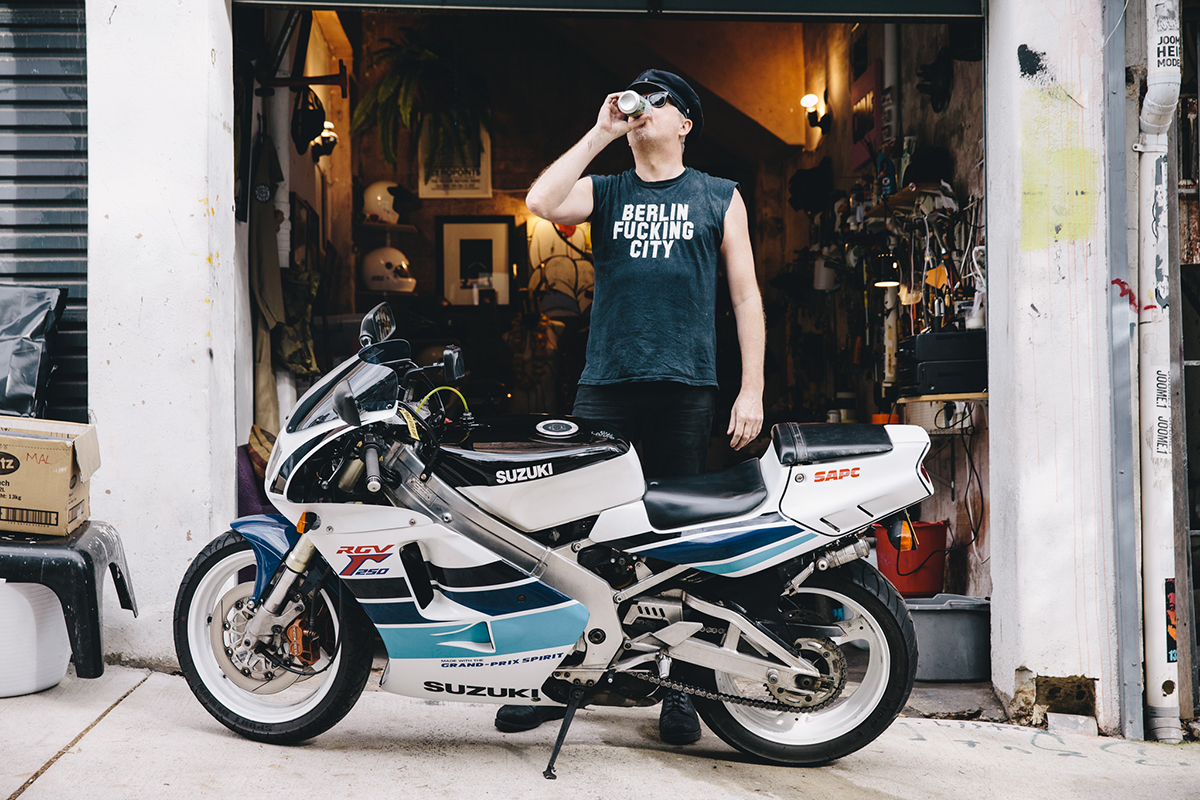 There’s plenty to look at in Klub Berlin; which is Simon’s designated bike workshop/art space/beer swigging station. It’s a space that mixes his passion for motorcycles with his passion and career through artwork. There’s also a bunch of cold beer, which is really bloody good. 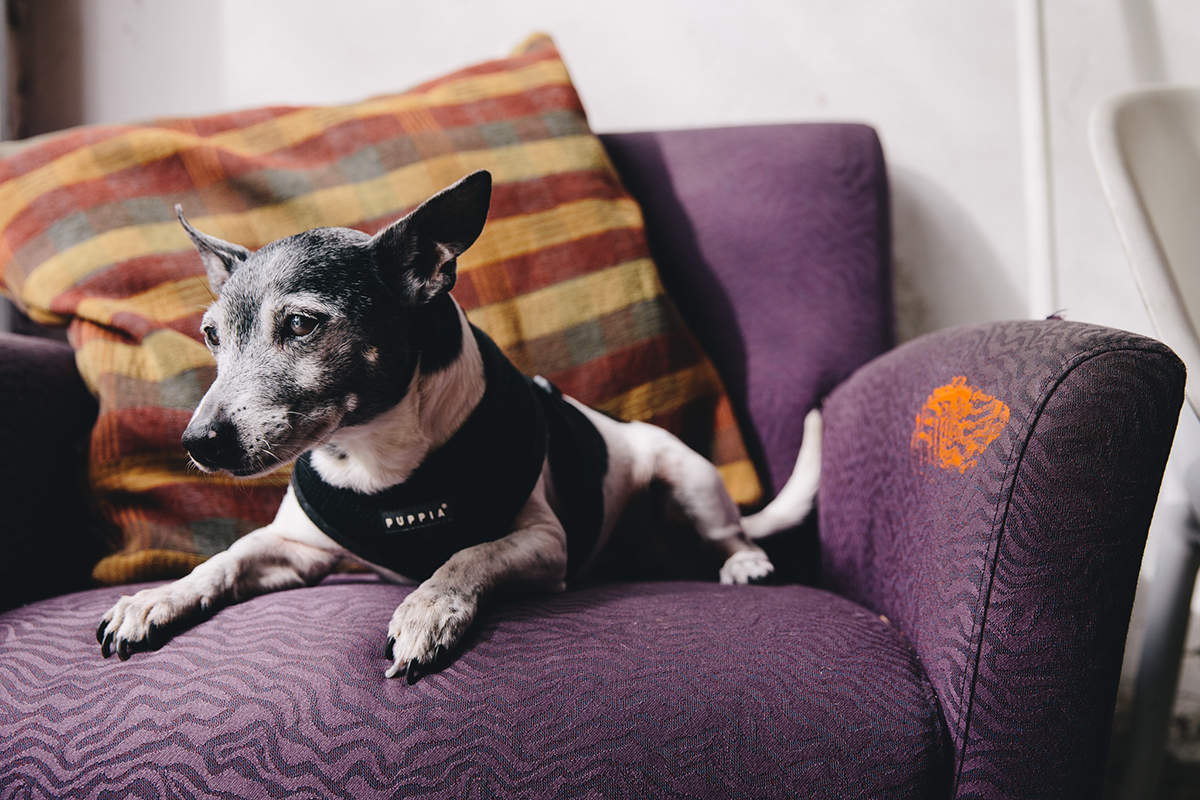 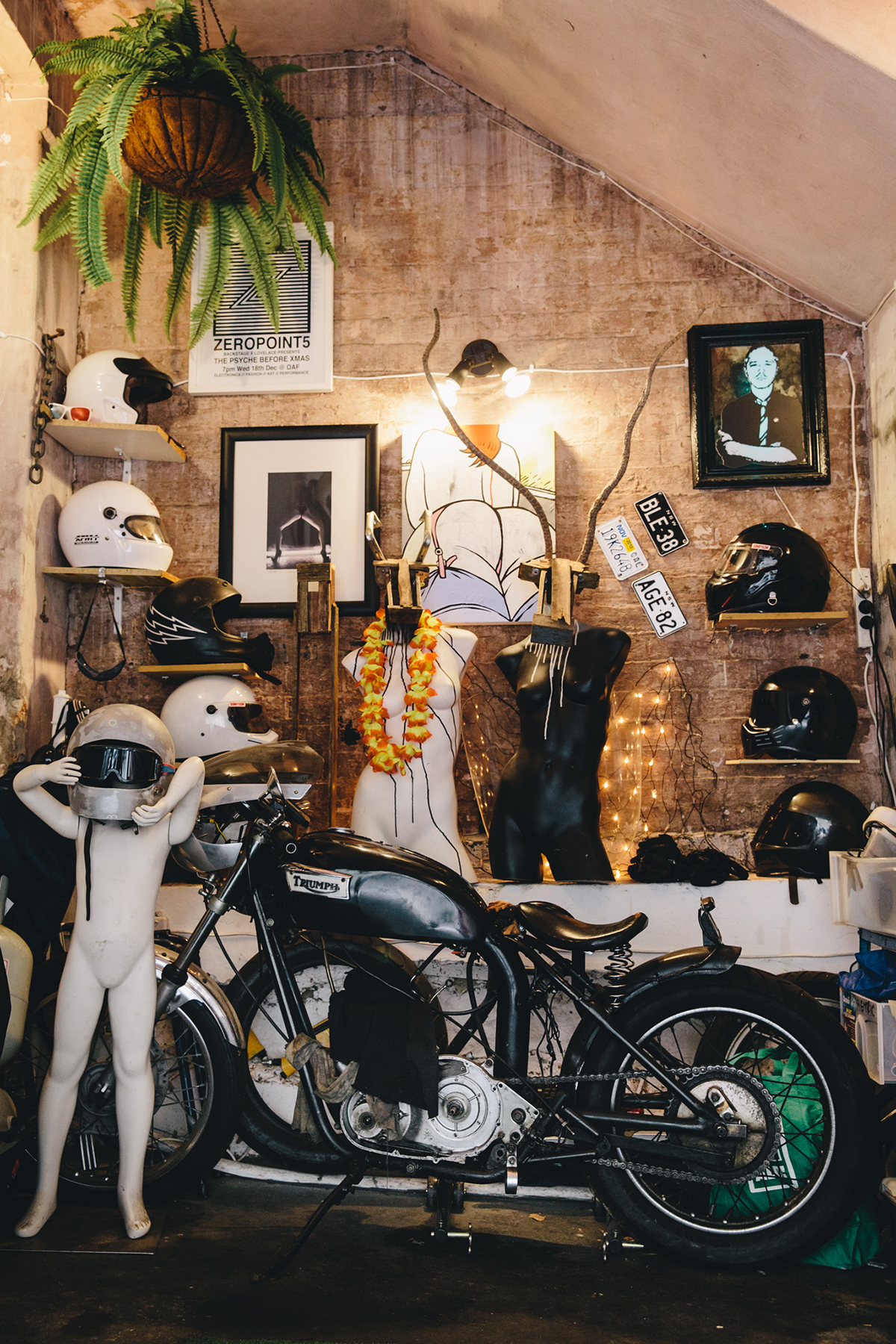 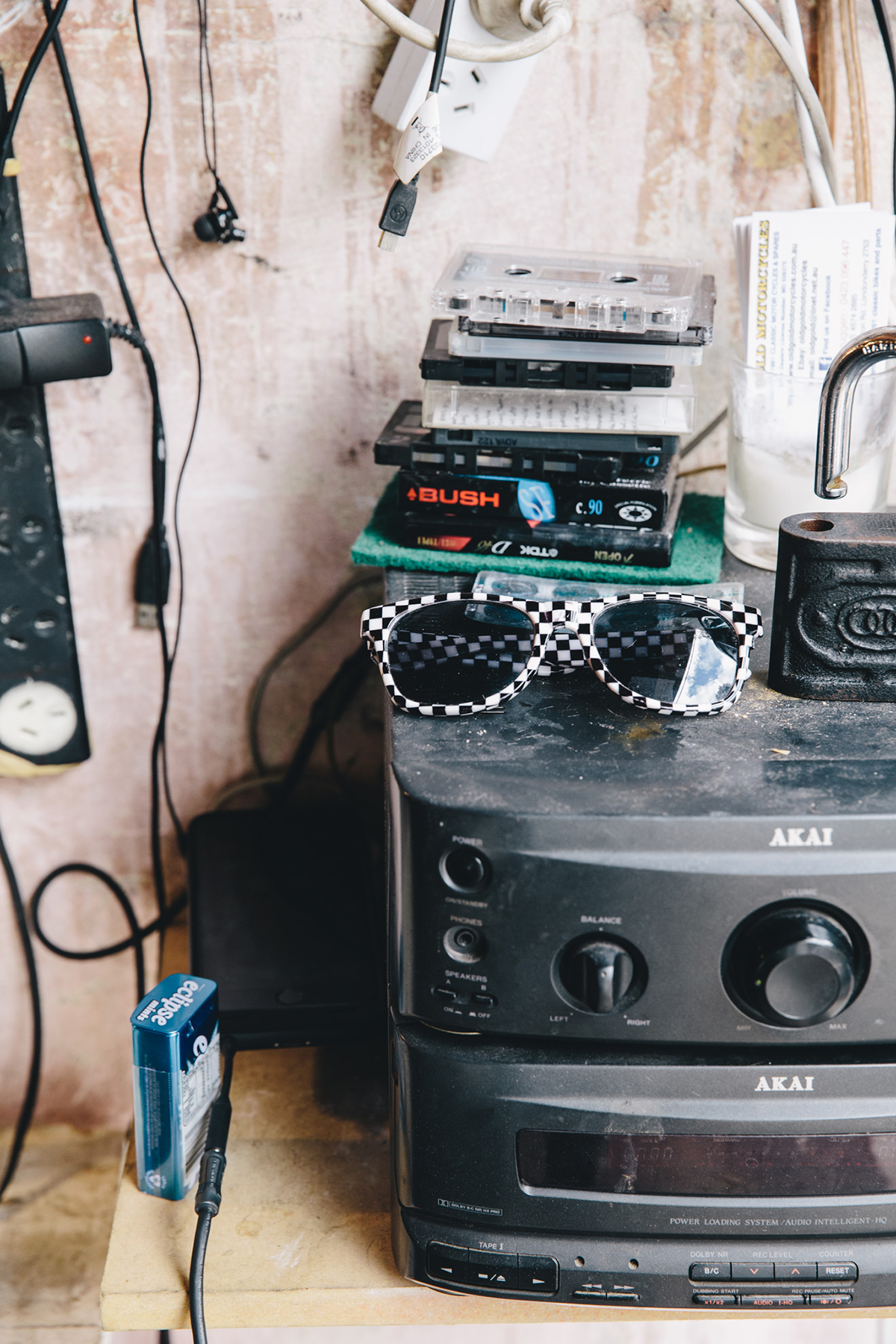 After returning home from a trip to Europe, Simon’s garage space was dubbed Klub Berlin in honour of the thriving creative scene he’d experienced, and this garage would form the perfect nod to Simons travels as it has become both a shrine to his passions and the perfect hangout spot for him and his mates. “I try not to do too much motorcycle work in the space truth be told. It’s more to relax and potter about in – but it’s equipped for small jobs on the bikes, and has enough seats and beer for a few mates.” 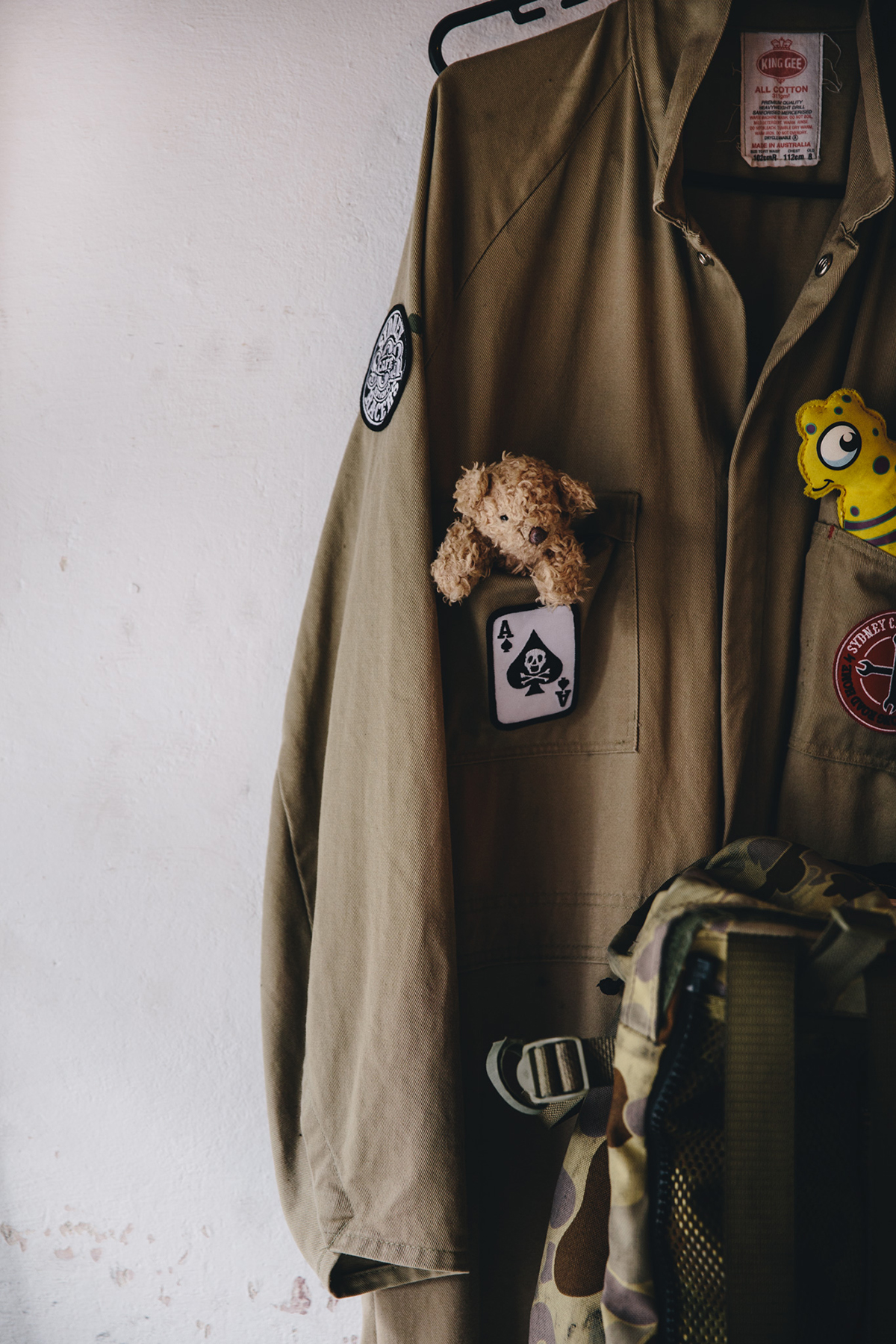 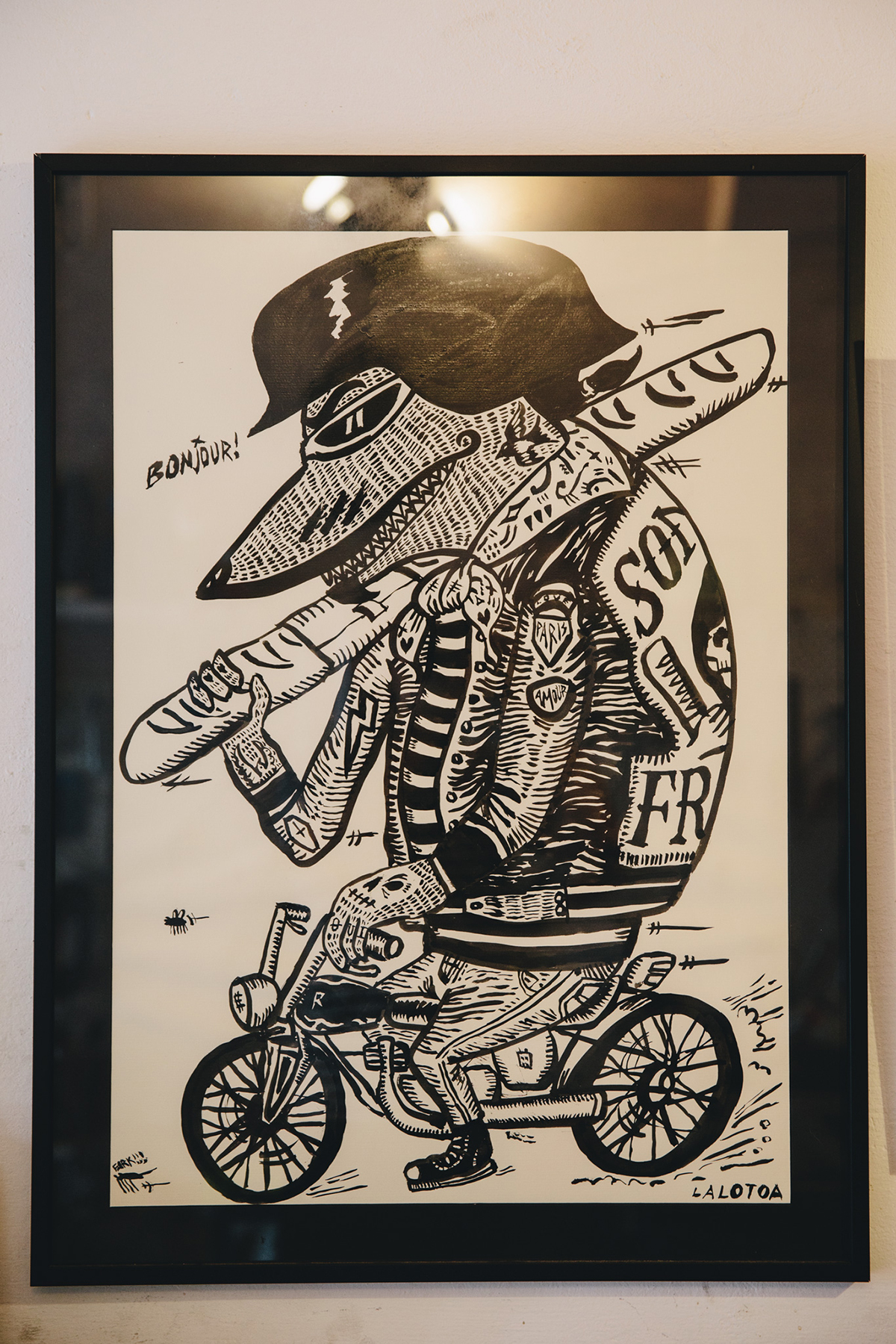 Emphasis should be placed on the beer drinking side to this spot when you ask Simon what kind of stuff goes on in here “Drinking beer, drinking beer, and occasionally we drink some beer. It’s great in the Summer time as an evening hang out – it keeps all the stinky smokers out of my fuckin’ apartment and studio. Plus, I can just kick everyone out and go upstairs when I’m done. Winter has not so much action. We pull the garage door down and turn on the gas BBQ for warmth. It’s a little ‘gamey’ but beats freezing ones nuts off.” 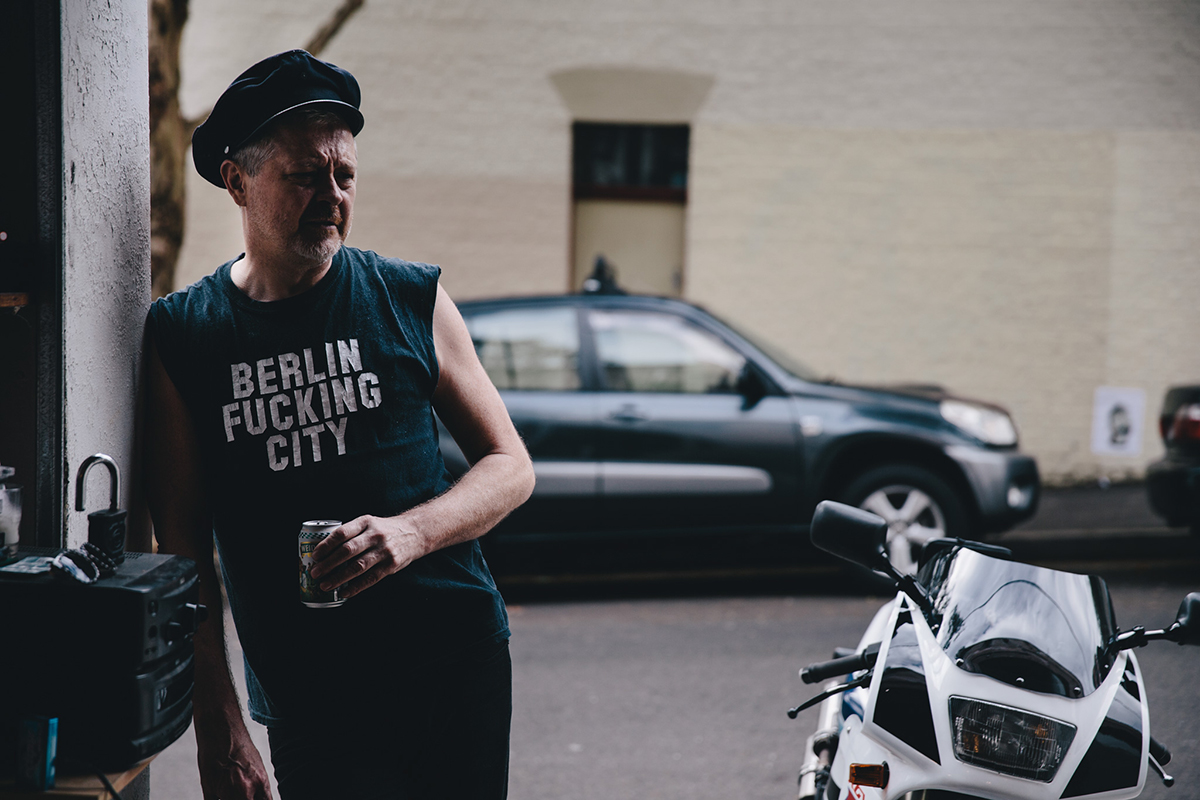 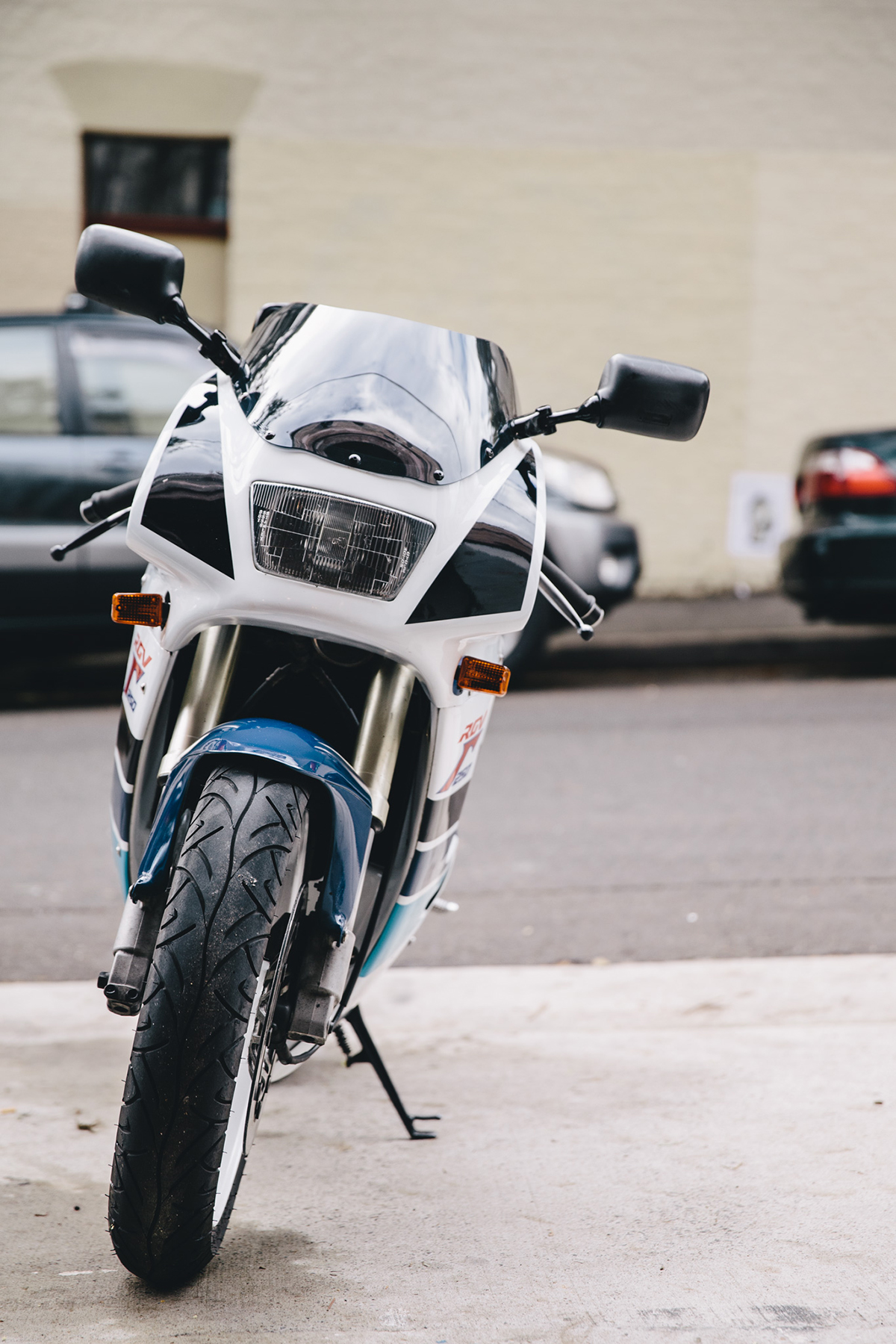 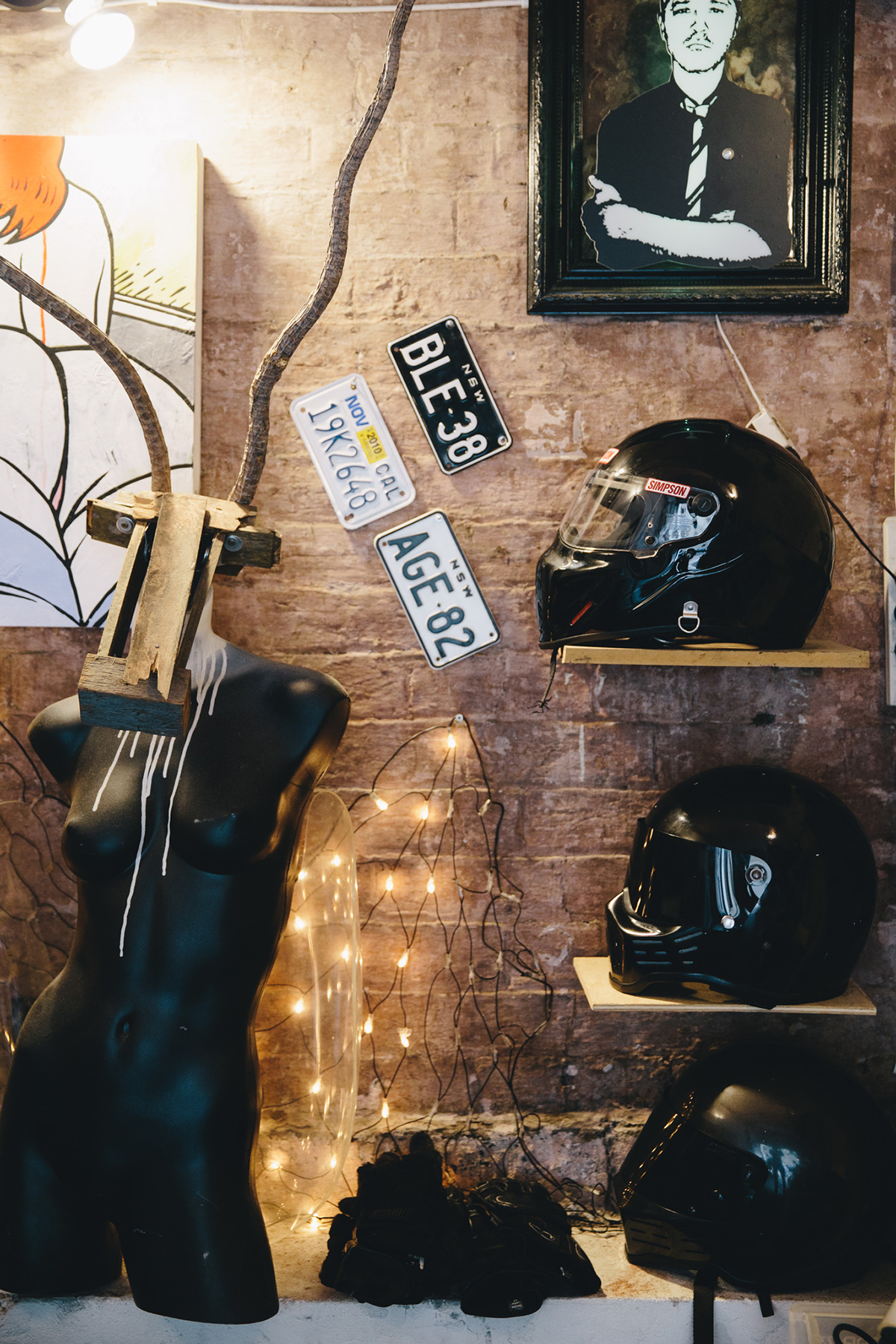 Currently Simon’s got a mean looking 1971 OIF Triumph Bonneville Bobber tucked away at the back of his space, awaiting some repairs so that it can roar through the streets once more as it’s guarded by a peculiar looking mannequin sporting an old school helmet. A 1993 Suzuki RGV VJ22 is Simon’s current no.1 toy to play, which happily puffs 2-stroke smoke throughout the street, while a 1993 Yamaha TZ350 Hybrid that was featured at Throttle Roll 2016 is off getting some work completed. 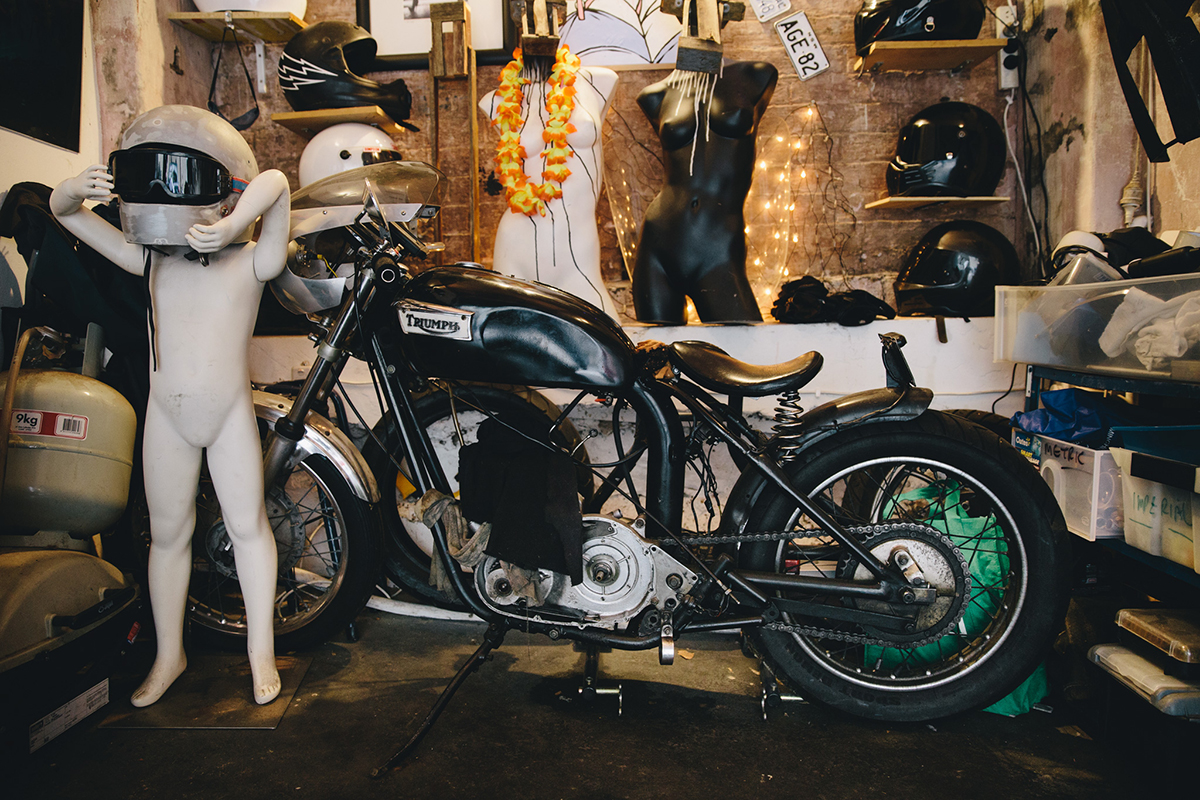 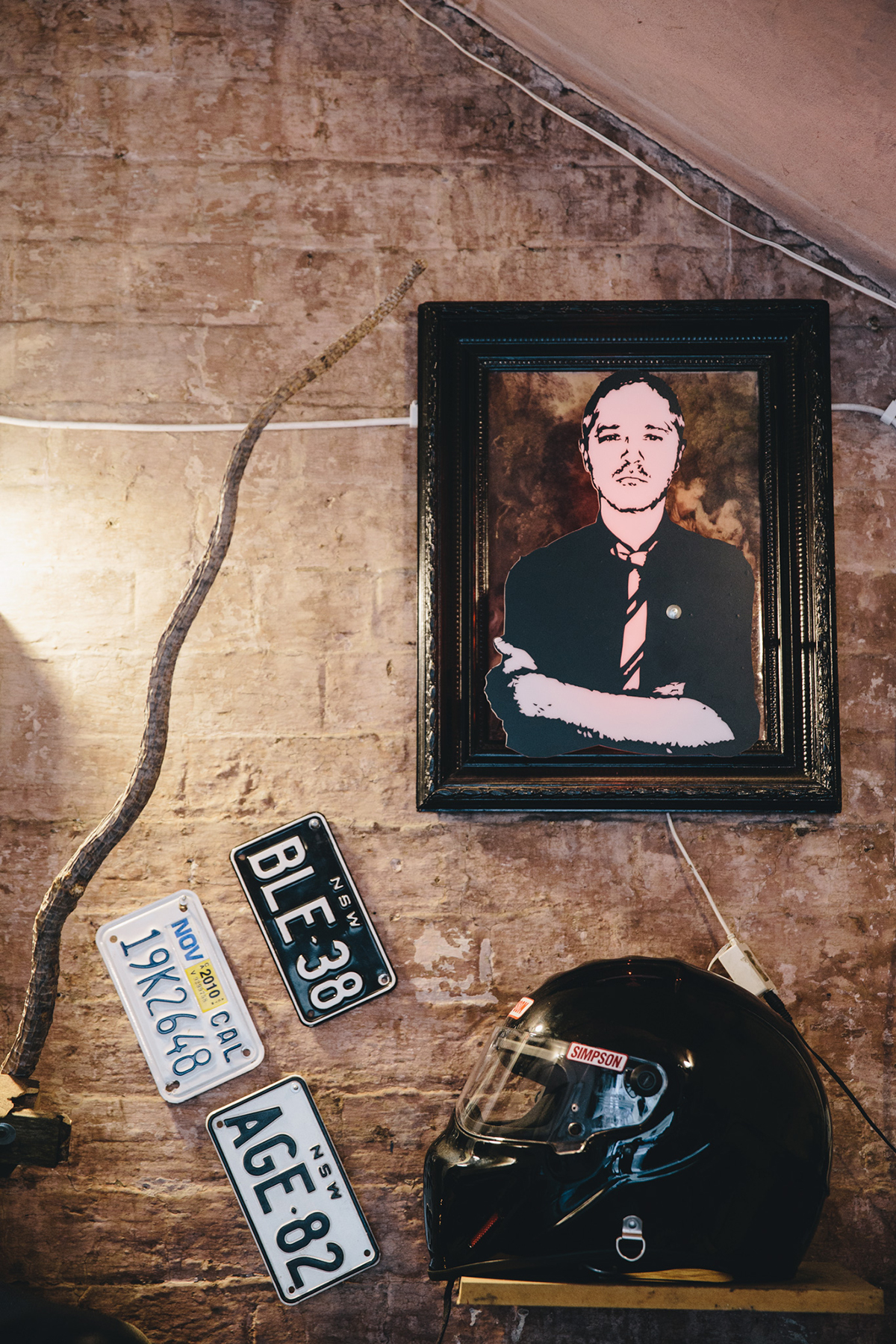 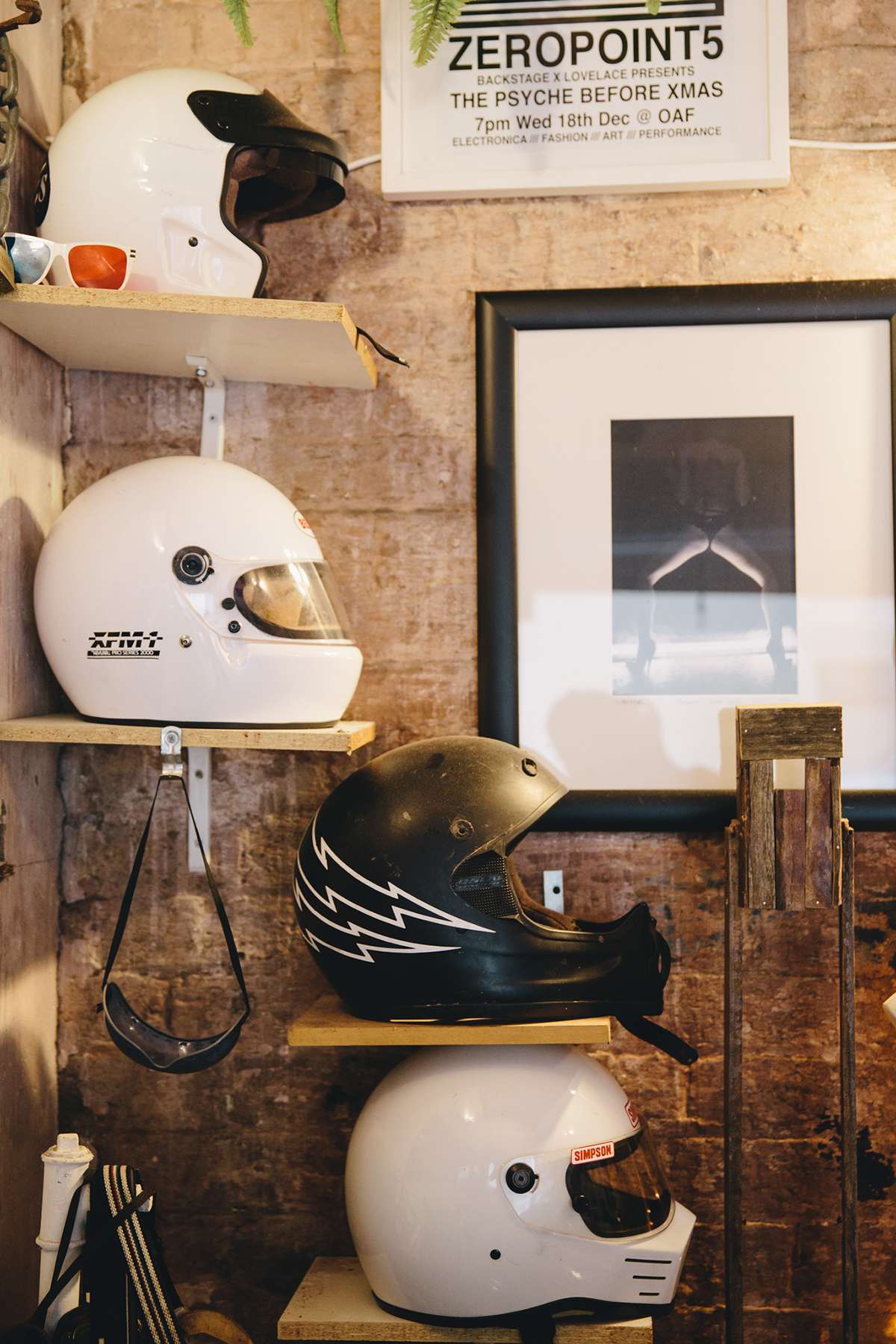 The artworks festooning the walls of the garage are a mix of Simon’s own work, and that of his mates. “The LED installation is from a portrait show at China Heights my friend Paul had organised. The work behind glass of the girl in the alley is from a bijou show I put on in the space for my friend Maximillion called ‘Si tu pisses partout, t’es pas Chanel du tout.’ [Pissing everywhere Is Not Very Chanel ] there’s a pen on paper piece by Raymond Lalotoa and a couple of paintings on board I’ve recently completed.” 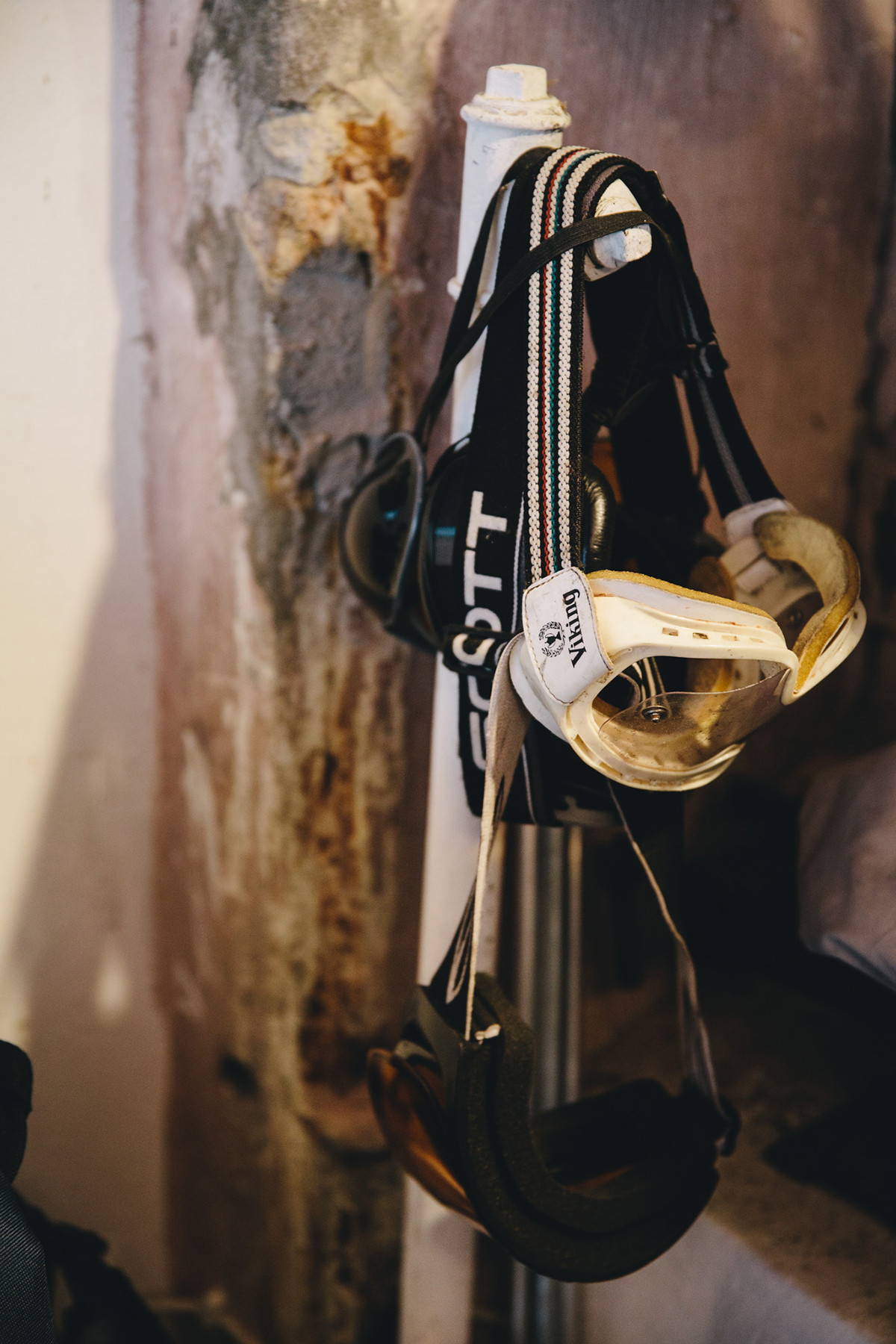 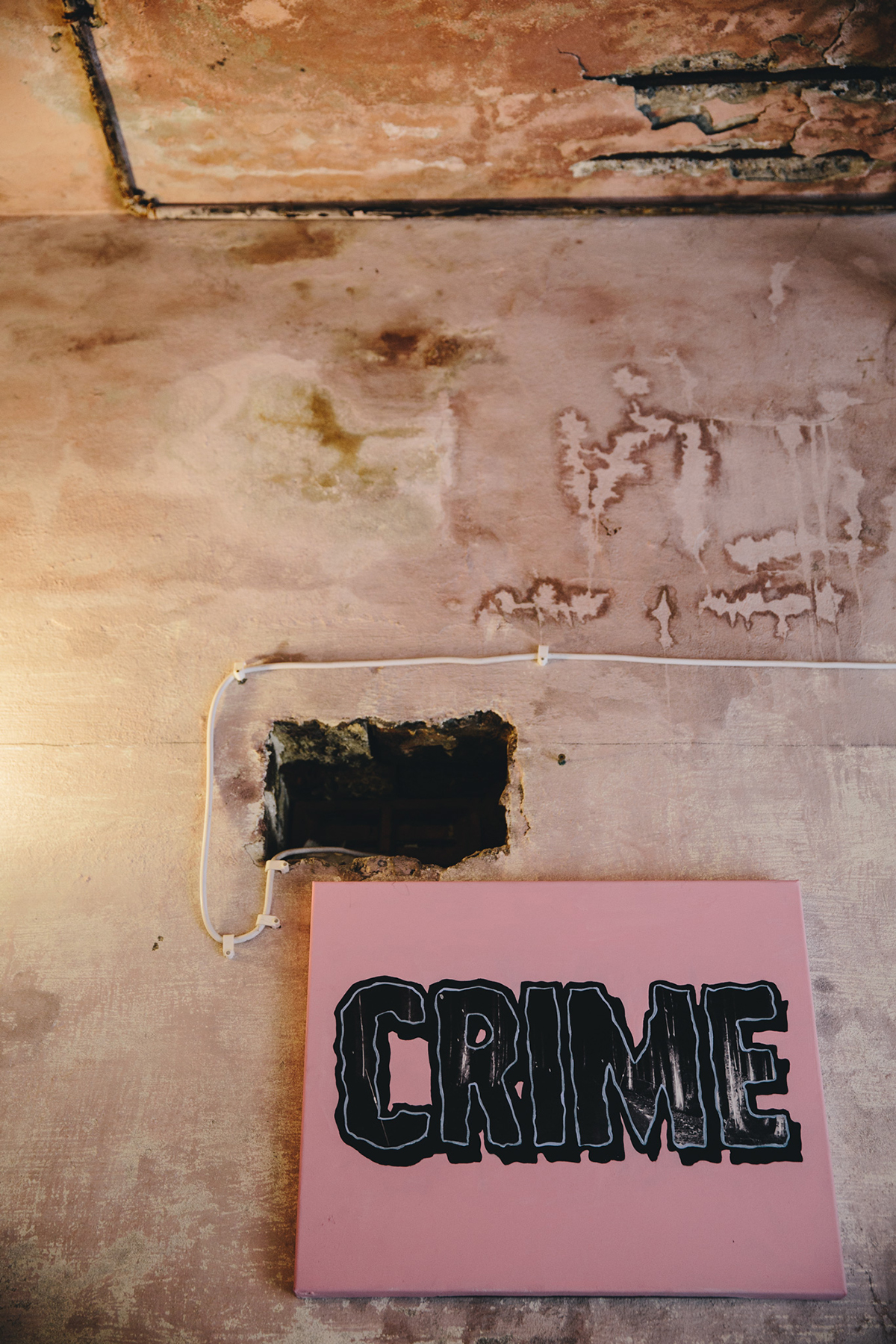 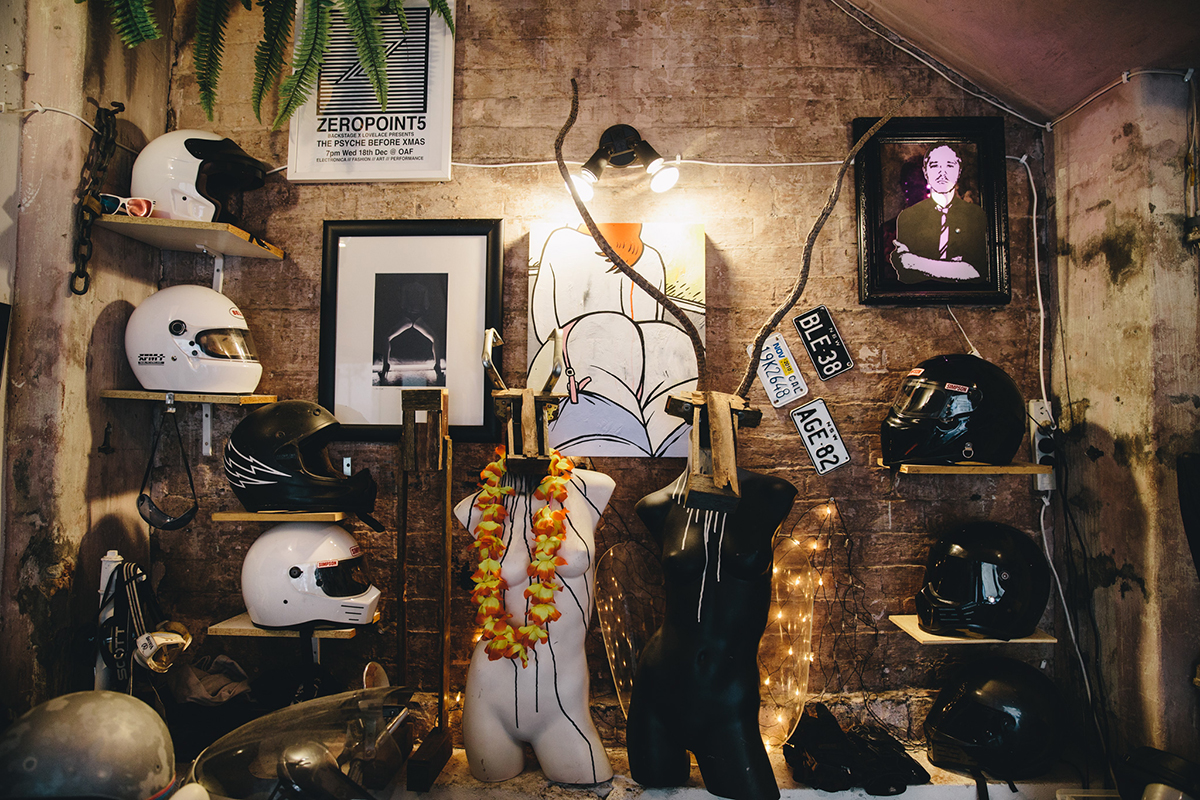 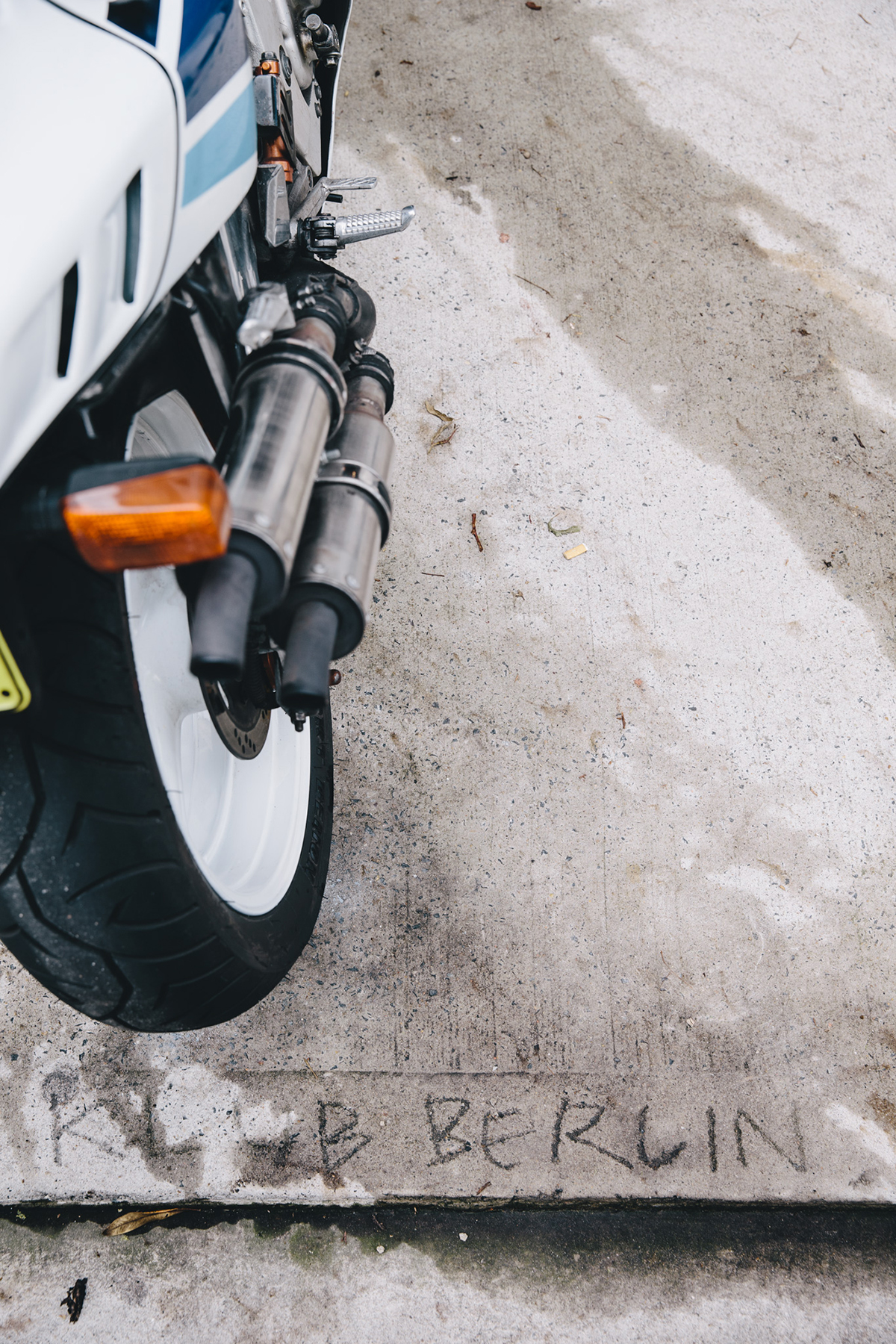 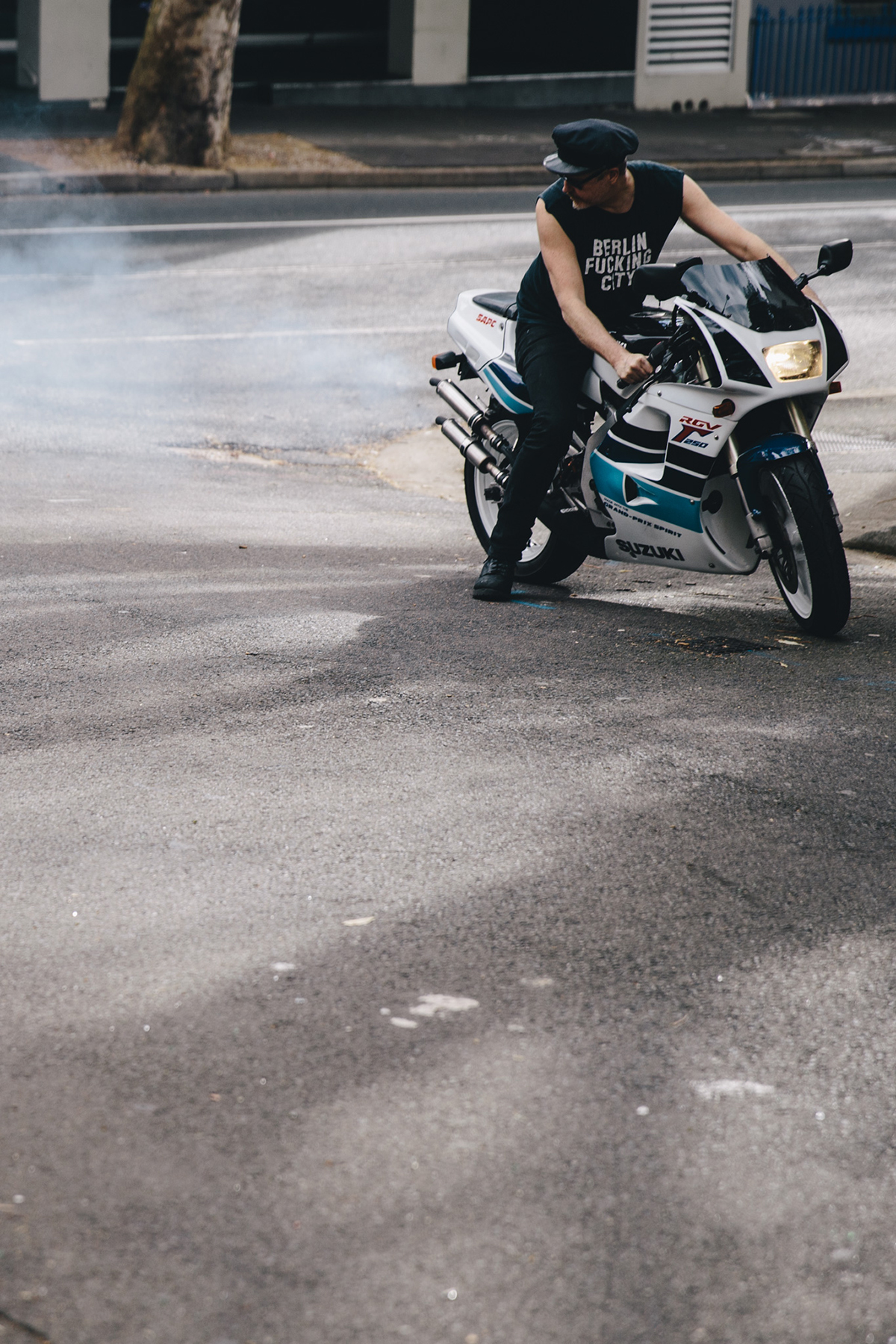 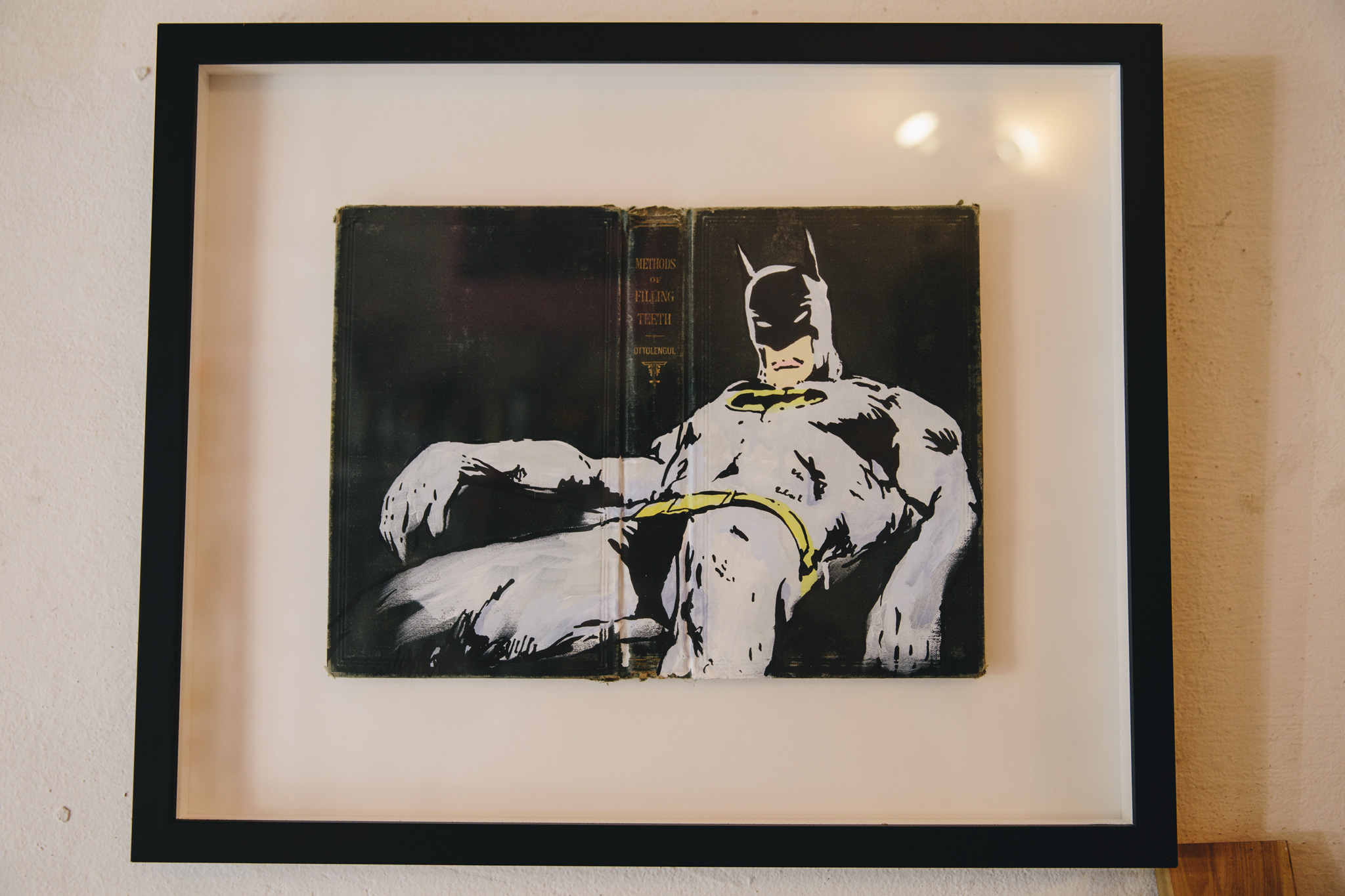 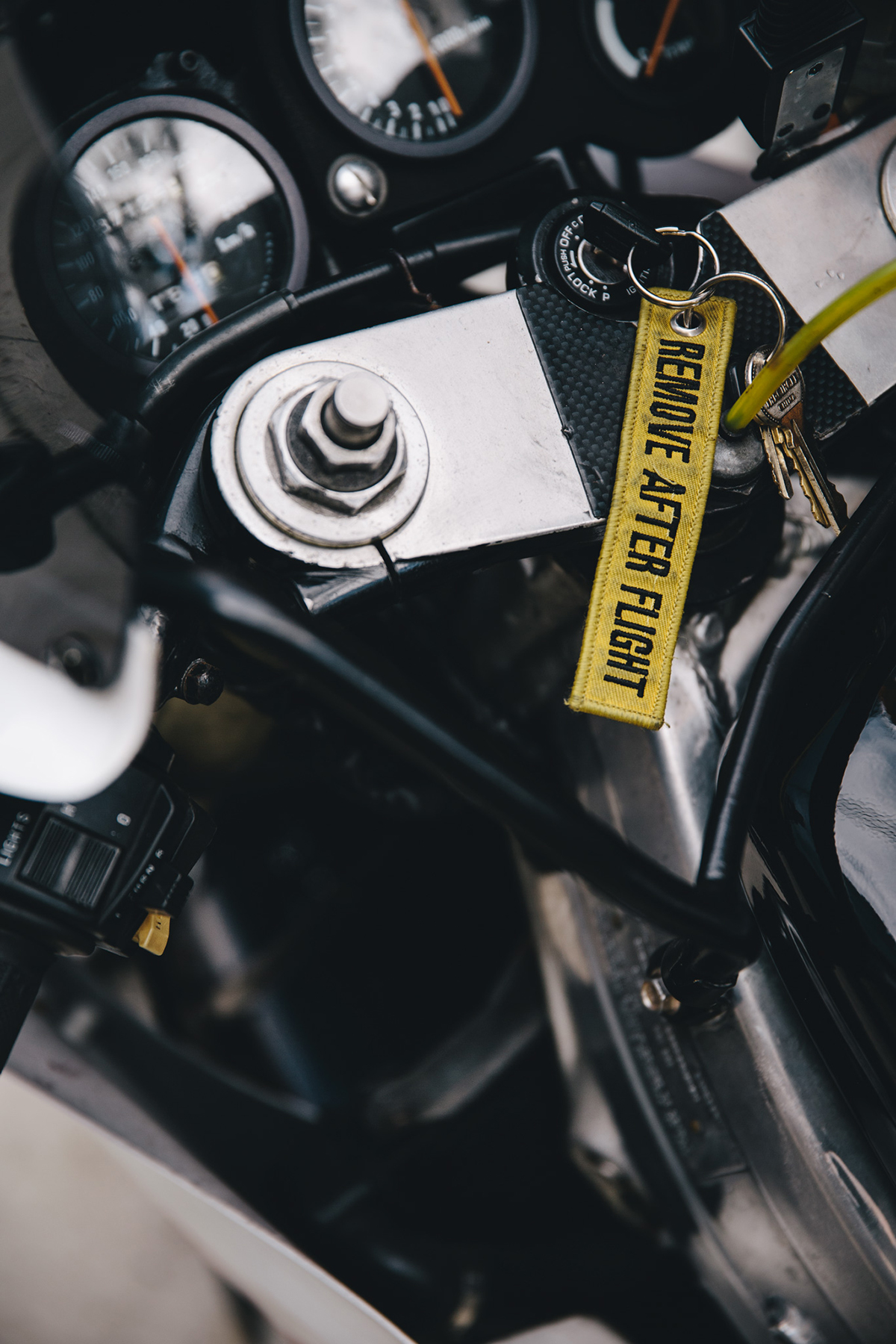 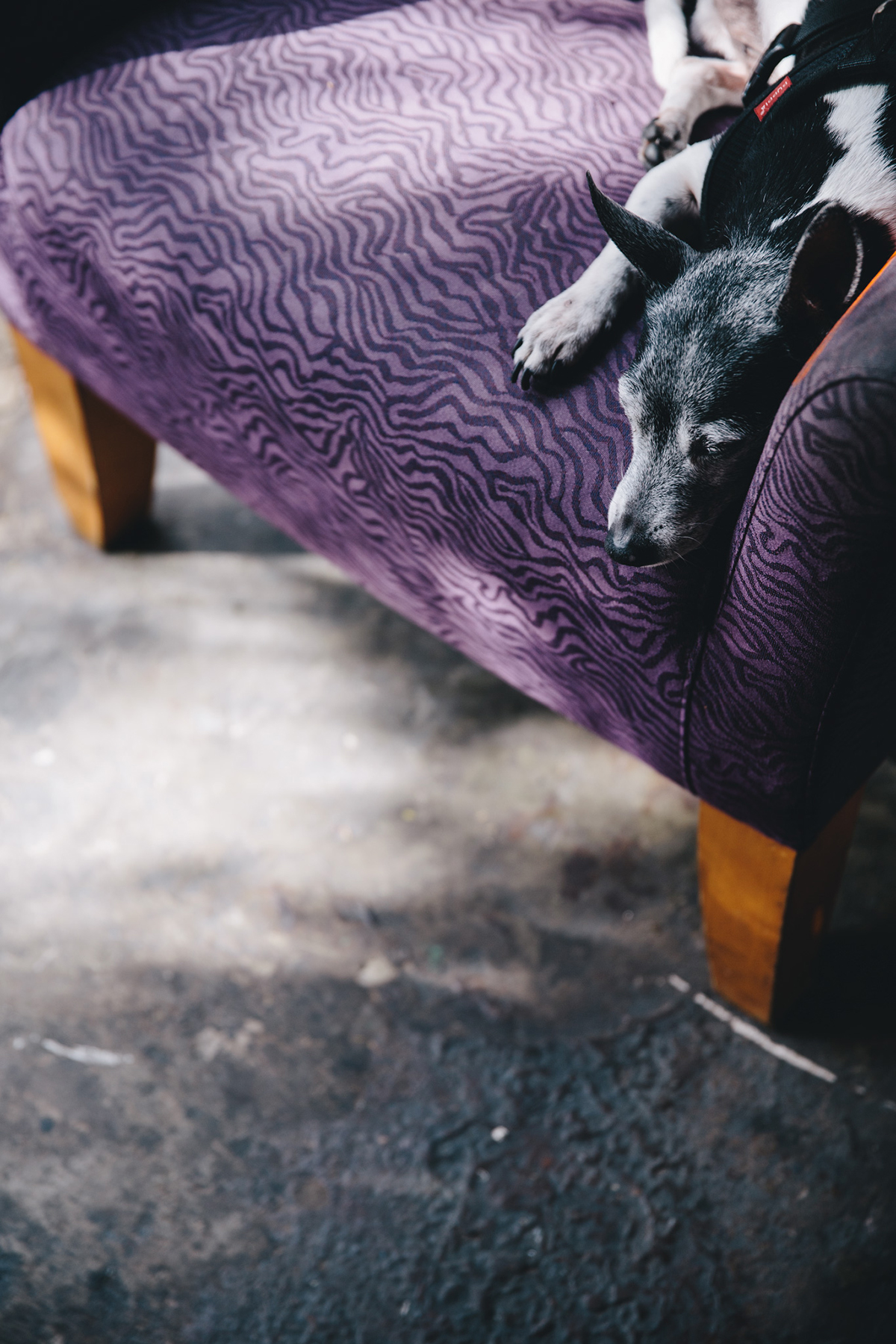 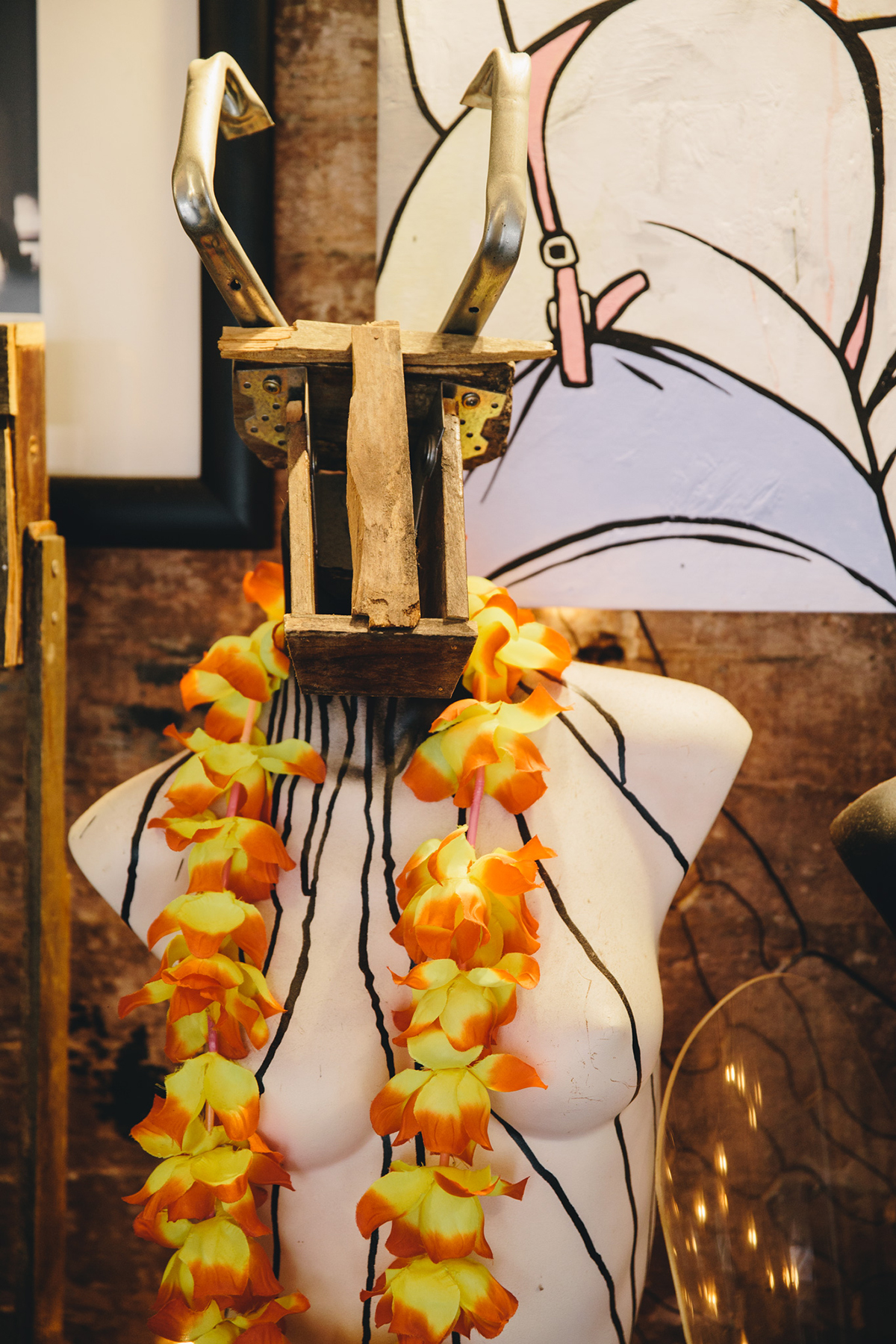 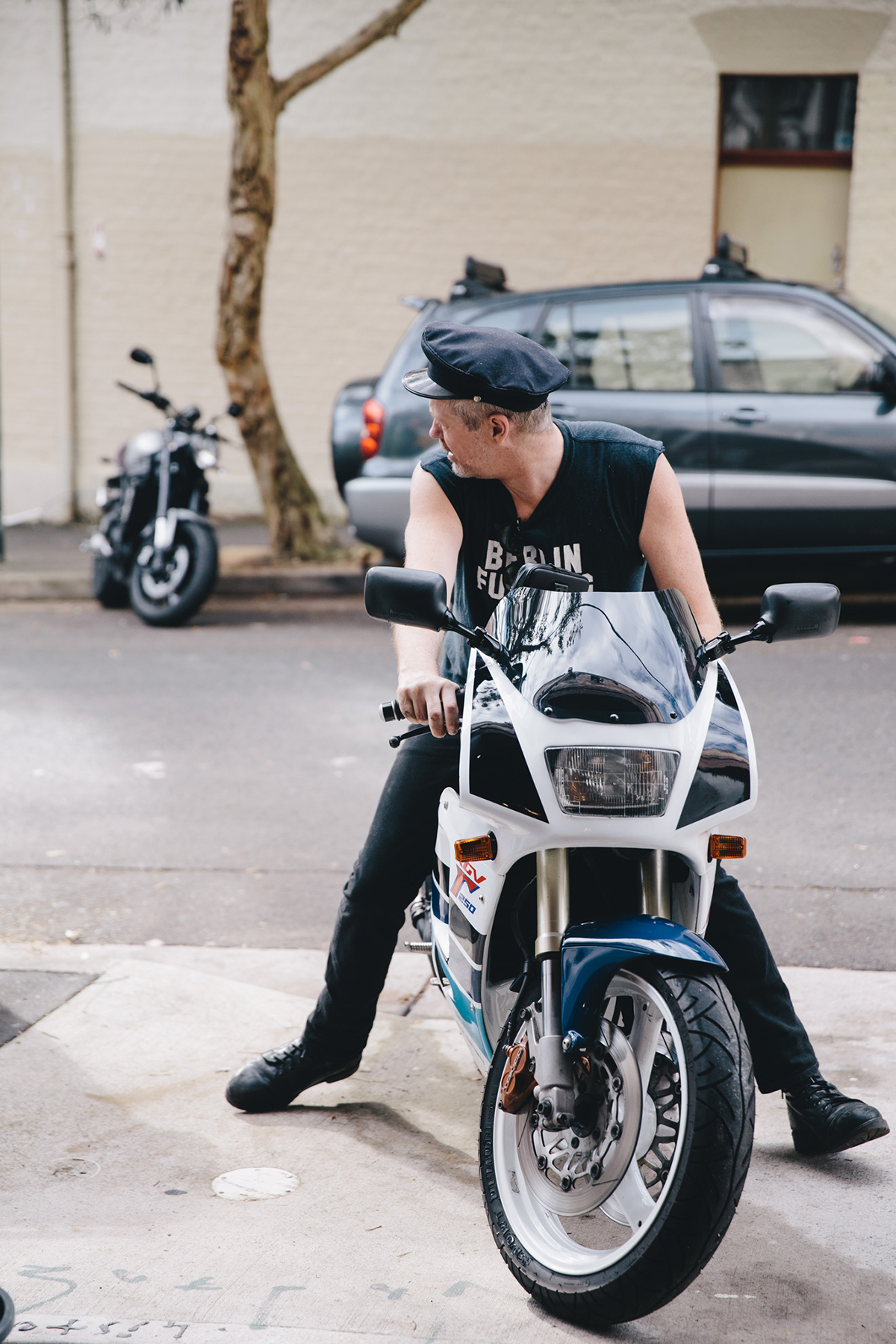 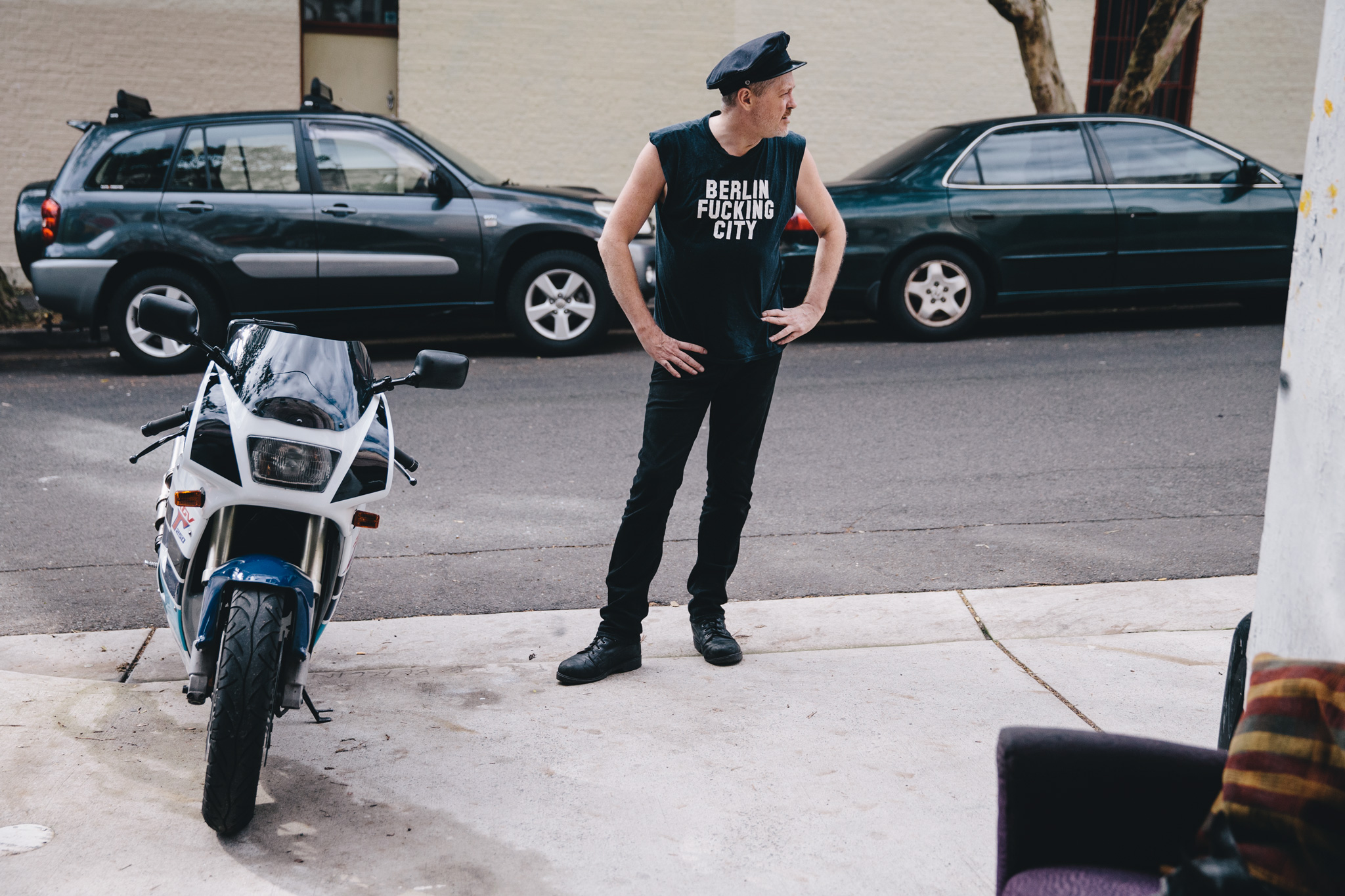 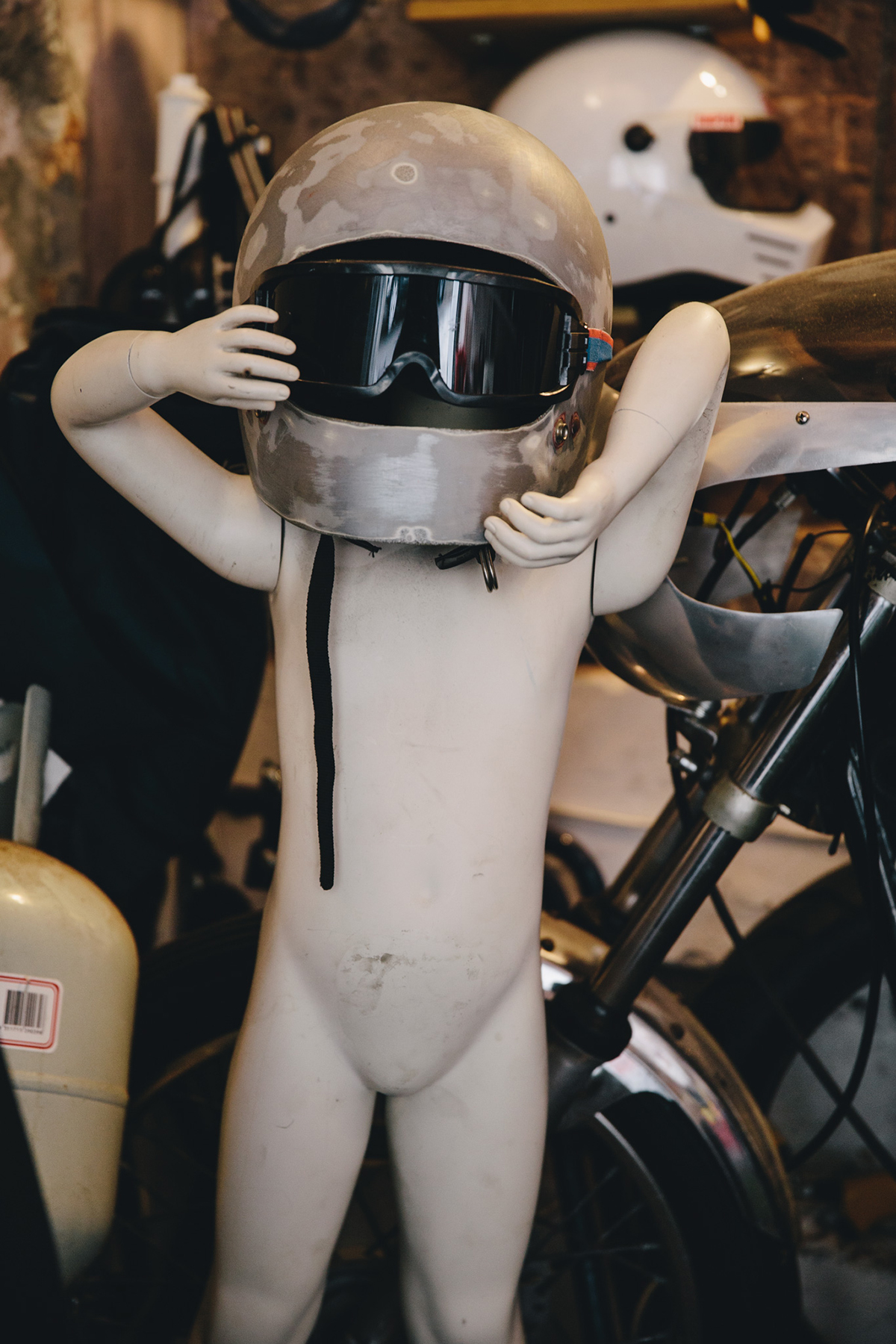 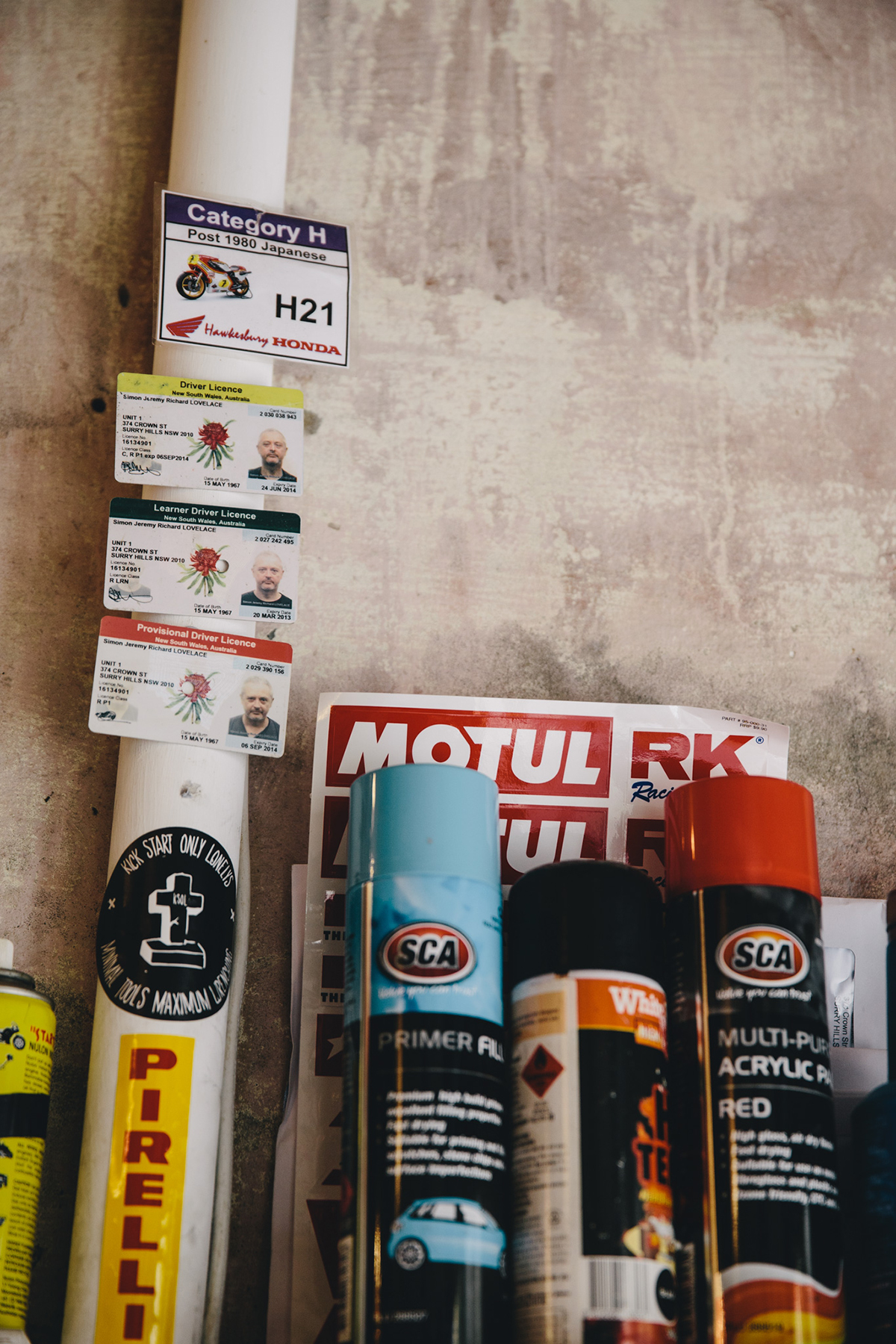