When he’s not churning out some of the best shirts throughout New Zealand, resident wrenching-enthusiast, Lee, is chopping away at a myriad of small capacity bikes and scooters. Meet Lee the Printer. 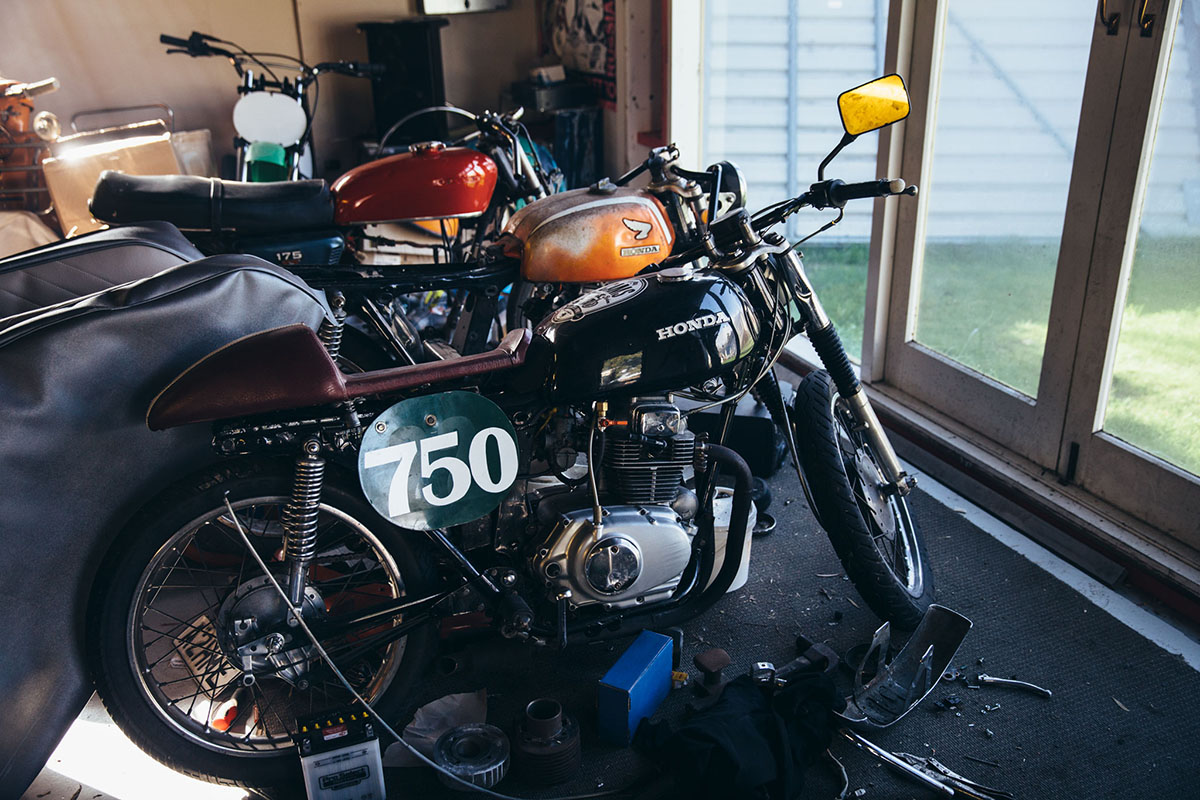 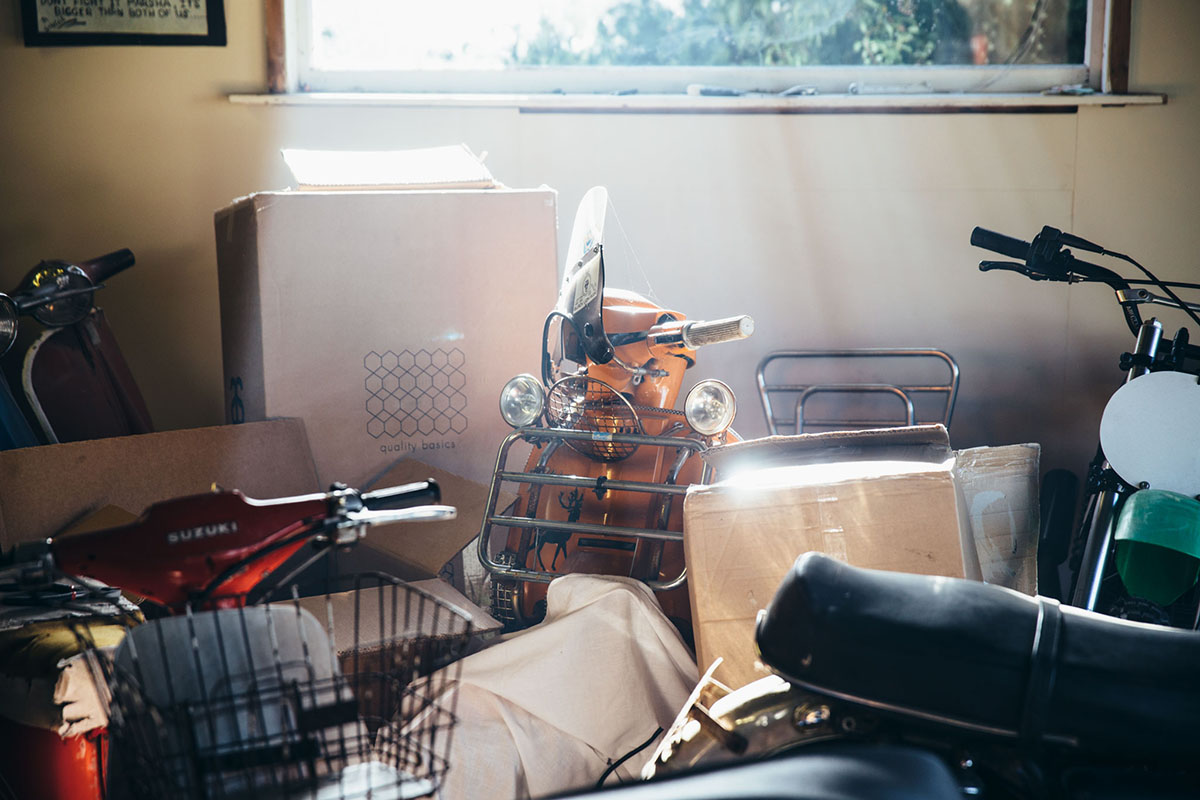 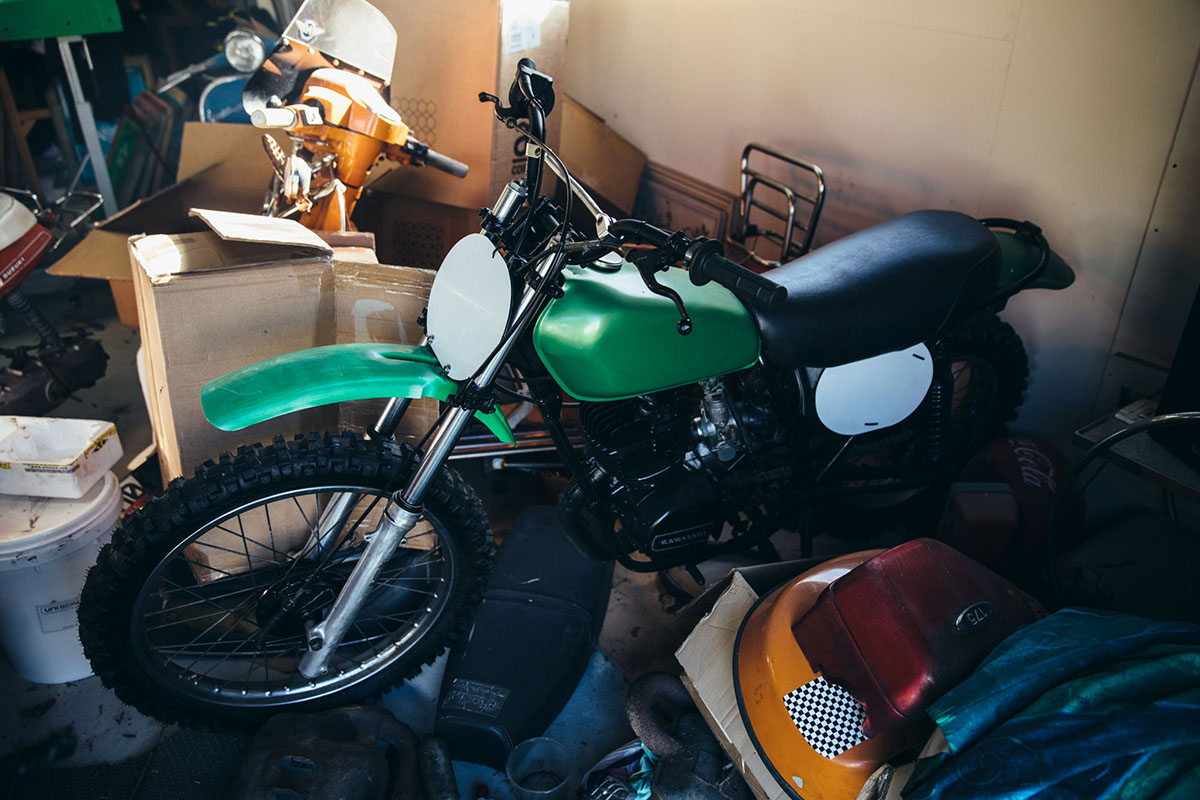 Lee’s home is a mix of work and pleasure, although his work is a pleasure for him as he prints shirts for all the local bike groups, bars and cafes in Christchurch. Growing up with a father who was a cars salesman, Lee was surrounded by everything with wheels. “I used to hang out there on a Saturday when I was a kid to help out and make coffees. I used to hang out with my friends and modify our pushbikes by swapping wheels and handlebars over. Dads business mate had a welder, so I asked him if he could weld up some extended forks on my pushbike, which he did. It was galvanized which was hard to weld, and mum got mad at me ‘cause it was actually her bike! I was 10 at the time and knew I wanted something different from every one else.” 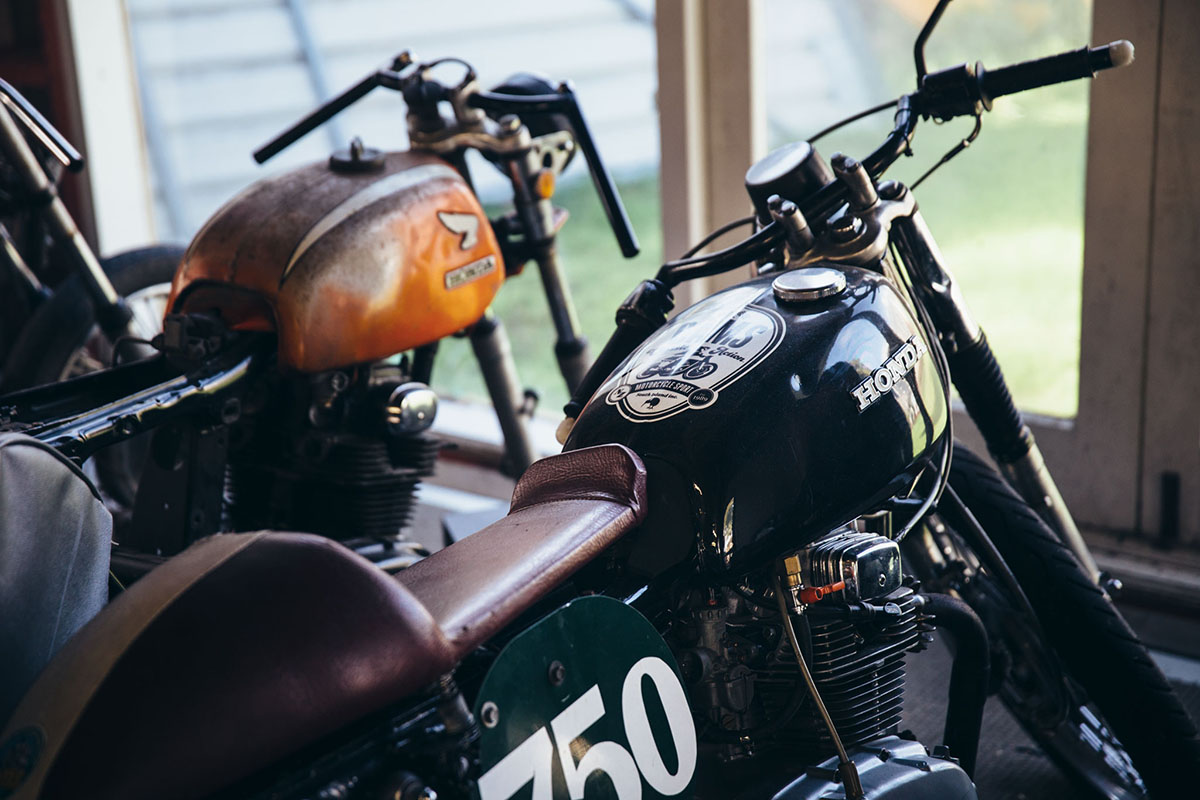 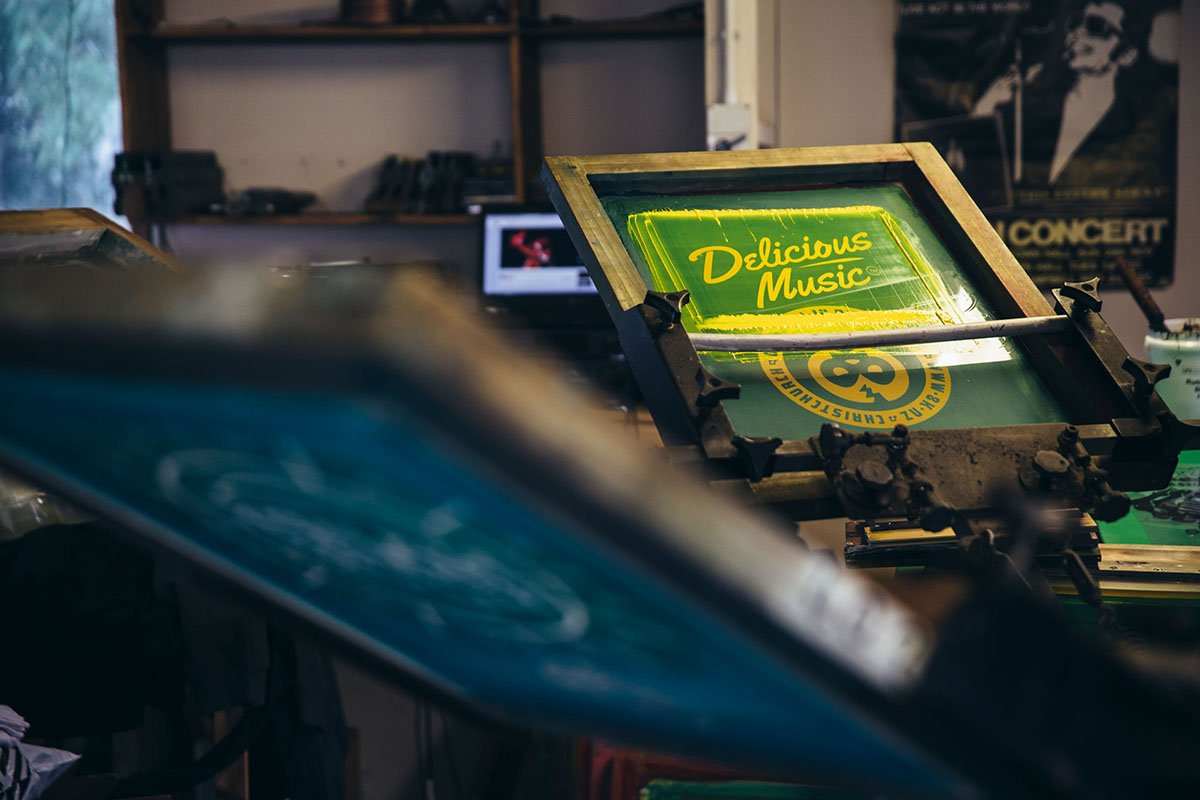 Fast forward some years and Lee had his first real motorbike, a little Honda CR125 that he would scoot about through the streets with no headlight, taillight or number plate. Lee is still very much hooked on bikes, having had over 60 which he’s worked on and customised to suit his mischievous needs. “My smallest bike being a Solex, my biggest was a GS 1000 S, and my most unusual being a BSA C10 painted with dragons, warlocks and wizards named ‘Once Upon A Time”. I have a passion for Vespa’s, which dates back to when I was 15 years old as they were cheap and I would take them on the dirt, shingle roads and give them death. My favourite Vespa at the moment is an orange Sportique 1963 with a PX 200 motor and a modified piston and ported cylinder. It goes well!” 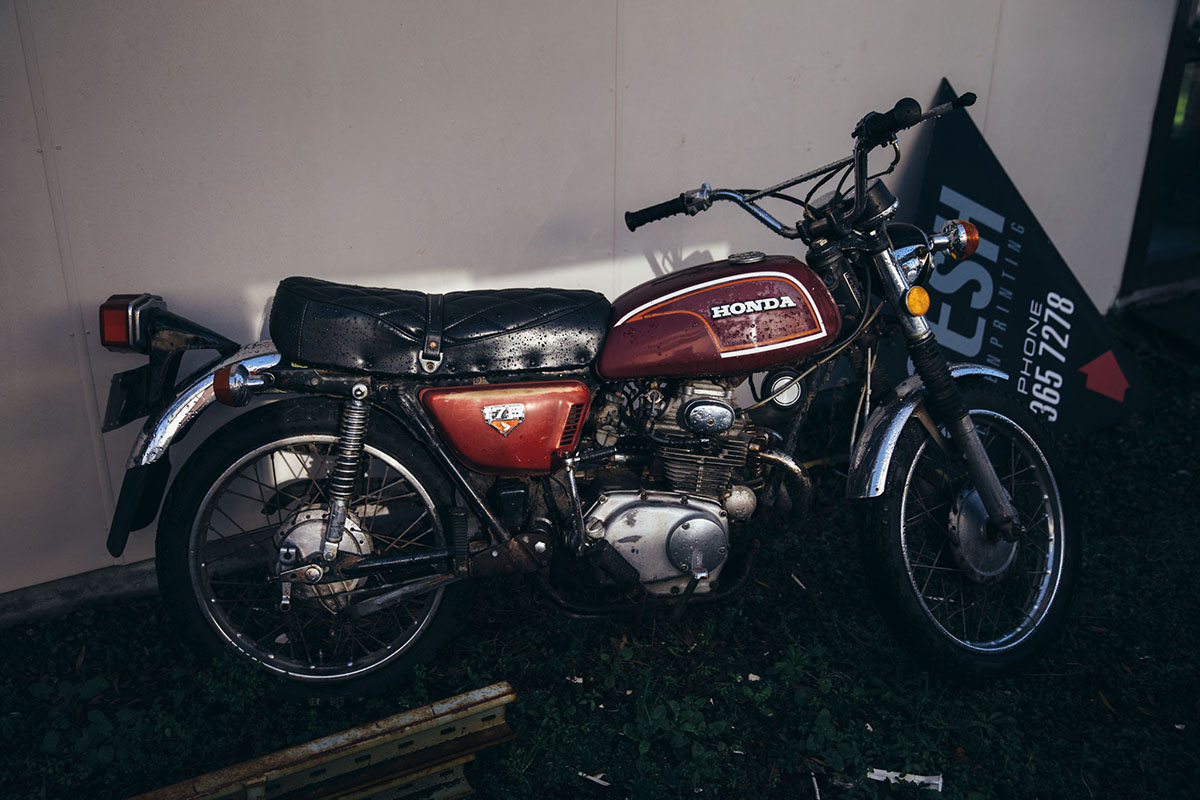 With Lee’s two large garages, his time is split between screen printing and wrenching on bikes. “It’s a disorganised mess, but I know where everything is and if you can’t find it, it’s on the floor. I have too many projects to mention, ‘cause I keep buying more bikes. Each one brings a new and exciting challenge that I can’t resist. I don’t have enough hours in the day, and it’s the darkness that brings me inside… but wait, there’s more! I’ve just turned my spare room into a mini garage for winter, where me and my friend Prunes have been helping out other’s with their scooters and the like. I’m happy to give where I can, and hope that help is passed onto others down the line. Some stuff I outsource. I’m very thankful to Kevin and Grant from the ‘Easties and Arcade” who have worked hard helping me get ready for Dirtmasters. Also thanks must go to Aaron and Chris, my Rumbler Bros who give unconditionally on their Saturdays to support myself and other bike minded friends.” 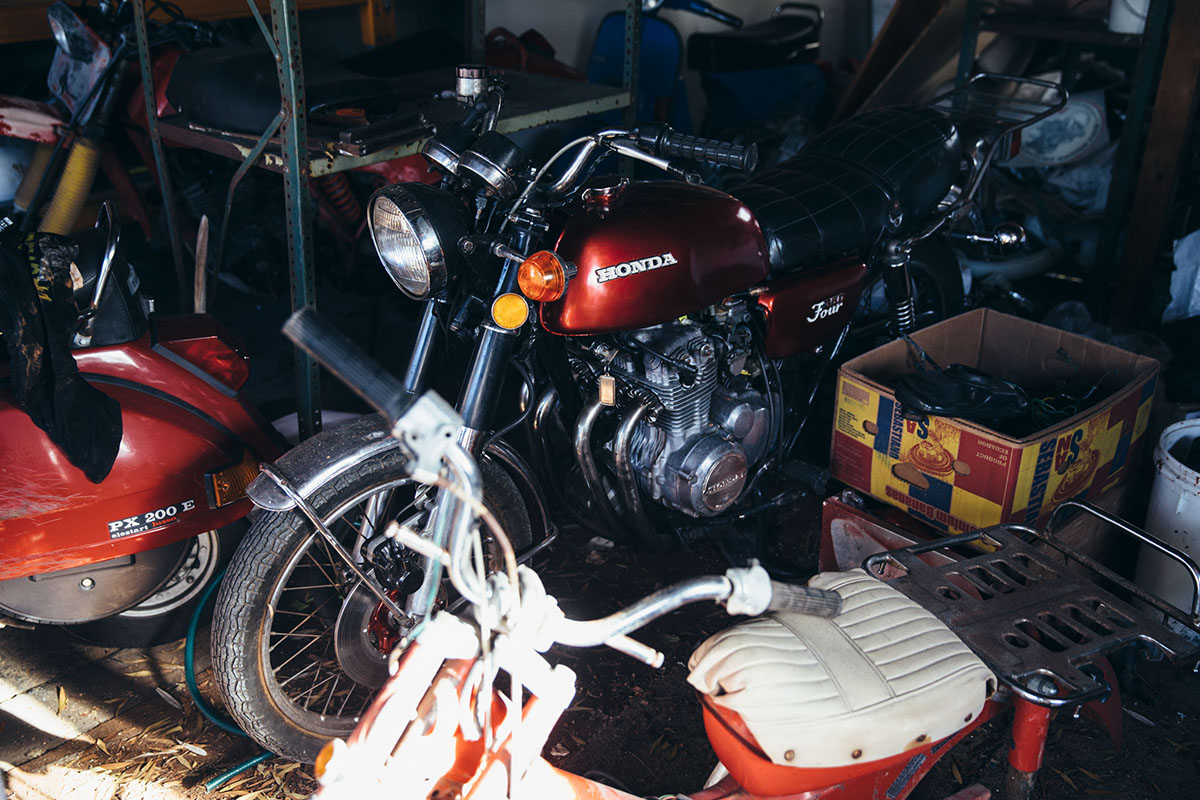 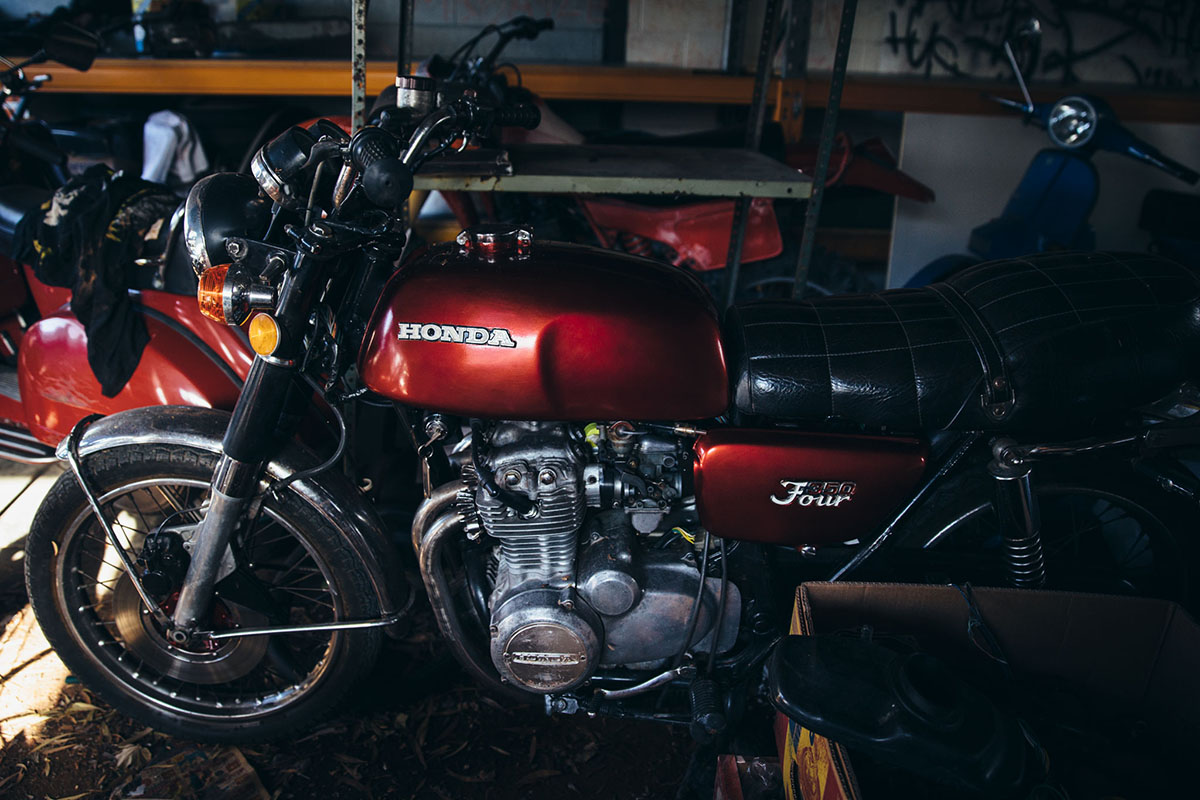 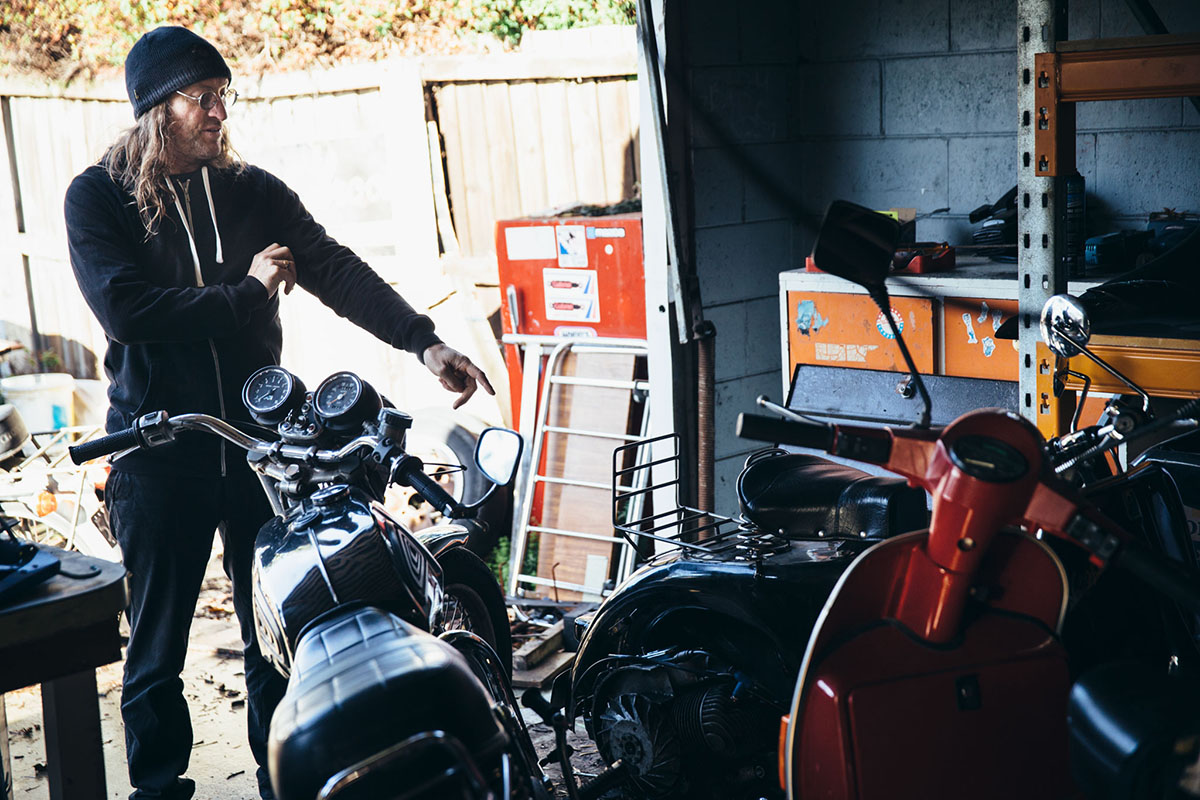 So what excactly is it about this obsession for small capacity machines? The blame lies on the Quake City Rumblers, who are converting kiwis to the church of tiny fury all across the land. “I’ve got a modified C90 which I took on a blast with the Rumblers. It was then that I realised there is a life outside of Vespas. The bike had been sitting around since 1990 and Grant the Eastie put his special touch into it to get it running. After running fine for a while, the motor came out and in went a 150cc pit bike motor, which kicks arse now – I love it! The C90’s now on par with the orange Vespa. I’m also a wee-bit of a fan of Suzuki FA50’s, and had the front end chopped off one to put a pit bike front end onto it to race at Dirtmasters. However, it’s not got enough power so might have to be slightly modified for next year. After my mate Susie had a fall at Dirtmasters on hers, I took over as it is much faster and kitted out. I jumped it and got too airborne and bent the fucking frame. Aaron was right there ready to scissor jack the frame and off we went for another round. I’ve always been into small bikes, however I do have a need for speed, hence the doing modifications to pretty much everything I own.” 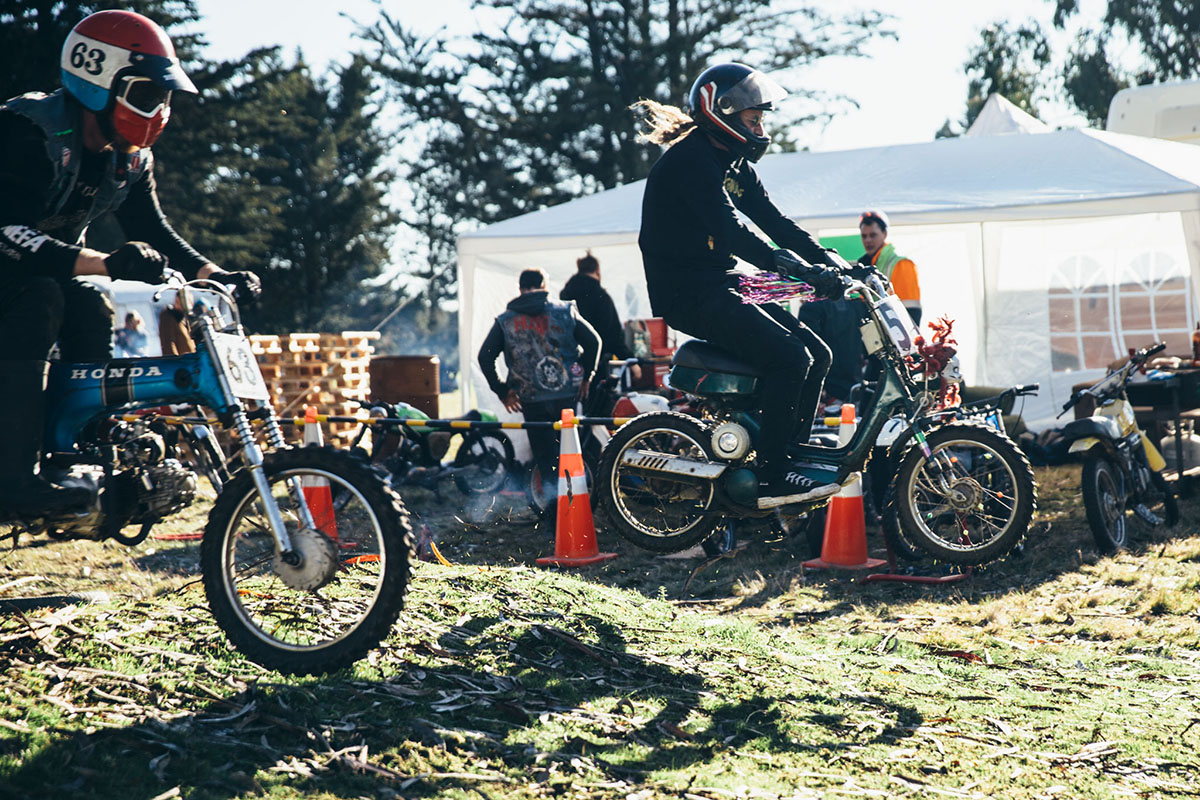 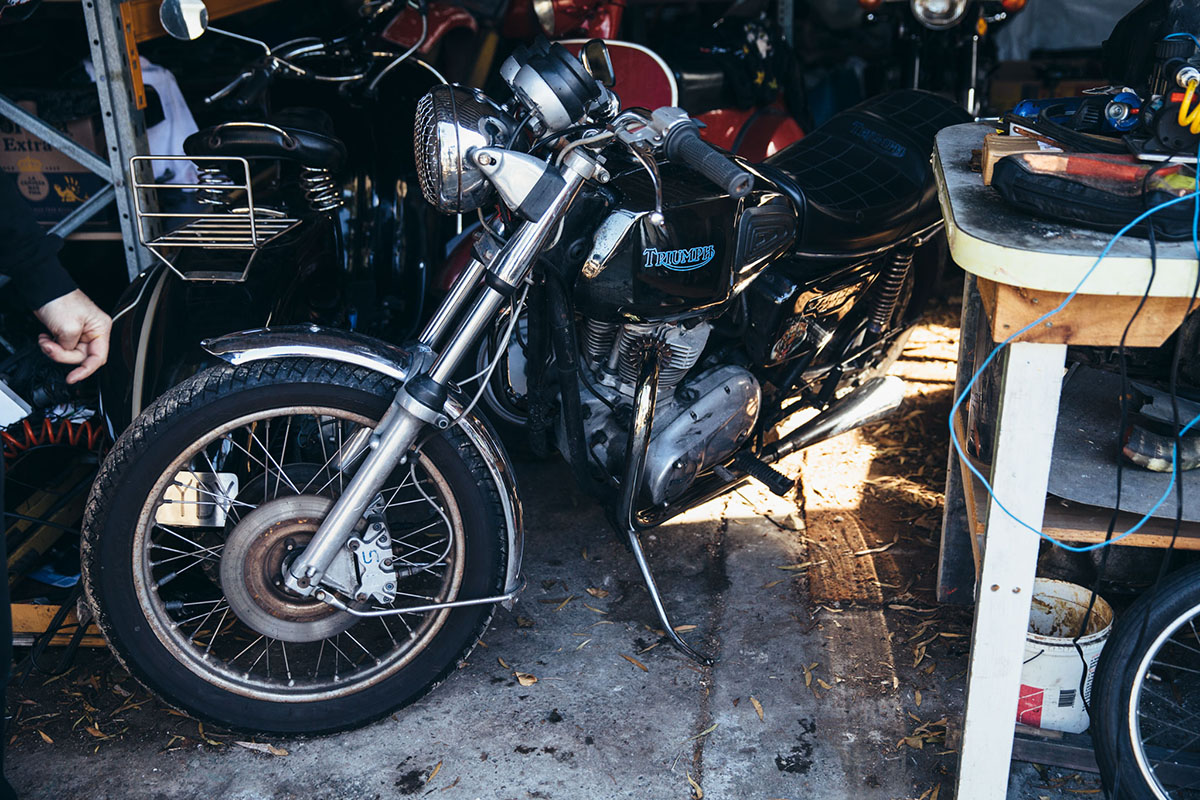 Recent completed projects include a start and finish on a C90 with a nifty 150cc repower which was taken out on a Rumblers ride. Hitting the port hills and streets of Christchurch to cause a little mayhem and shake up the squares, they finish their rides at the sacred site of Smash Palace for a cold one. “I enjoy riding with like-minded mates. We don’t take it too seriously – we have fun, take a few risks, and enjoy! I work religiously every Wednesday but also whenever I can between printing, children and vino (or beer… or tequila). I have a good balance of life, work, bikes, fun, children, beer and boobs.” 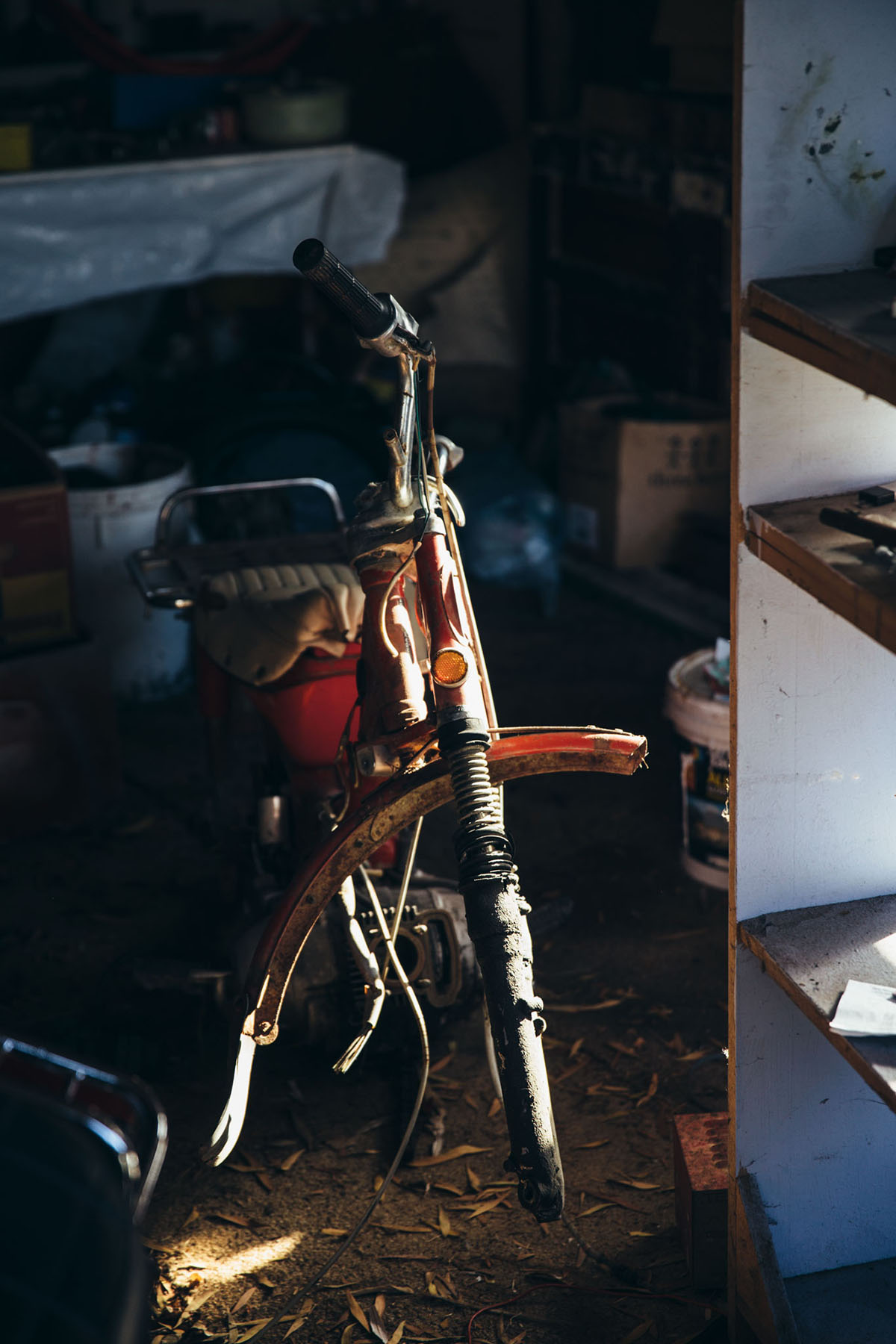 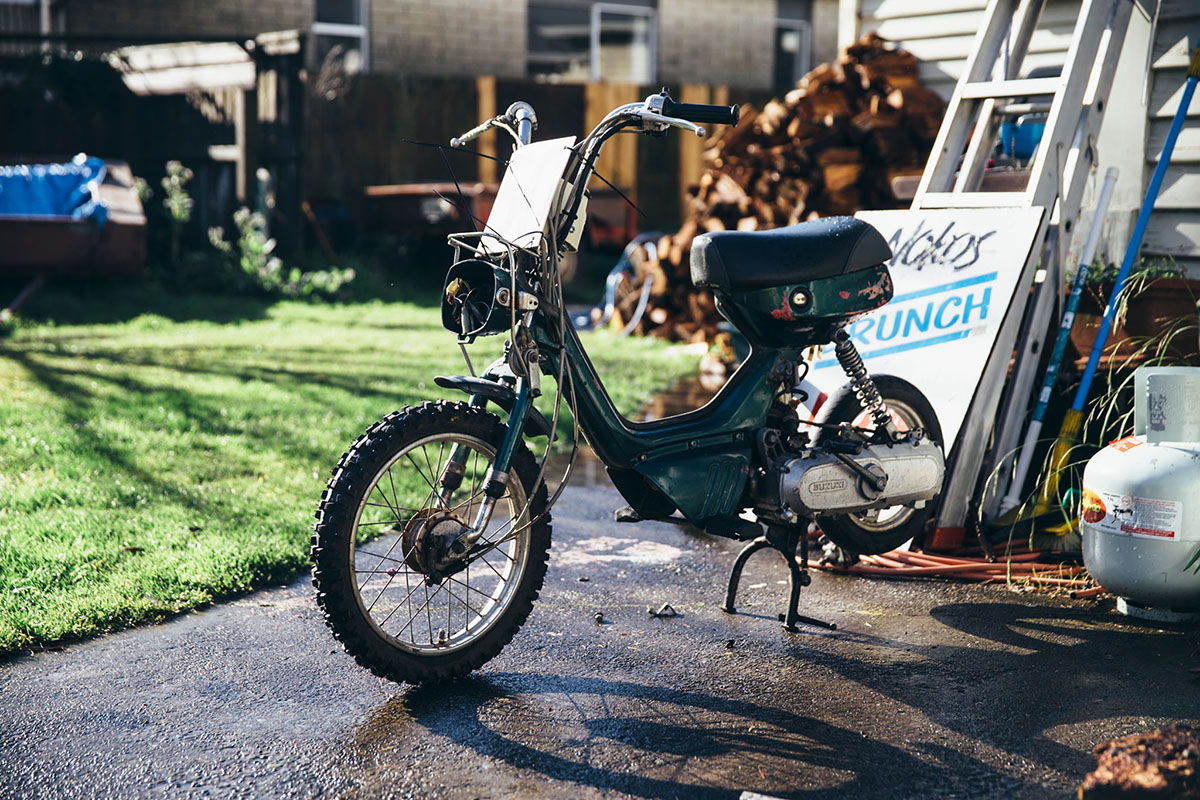 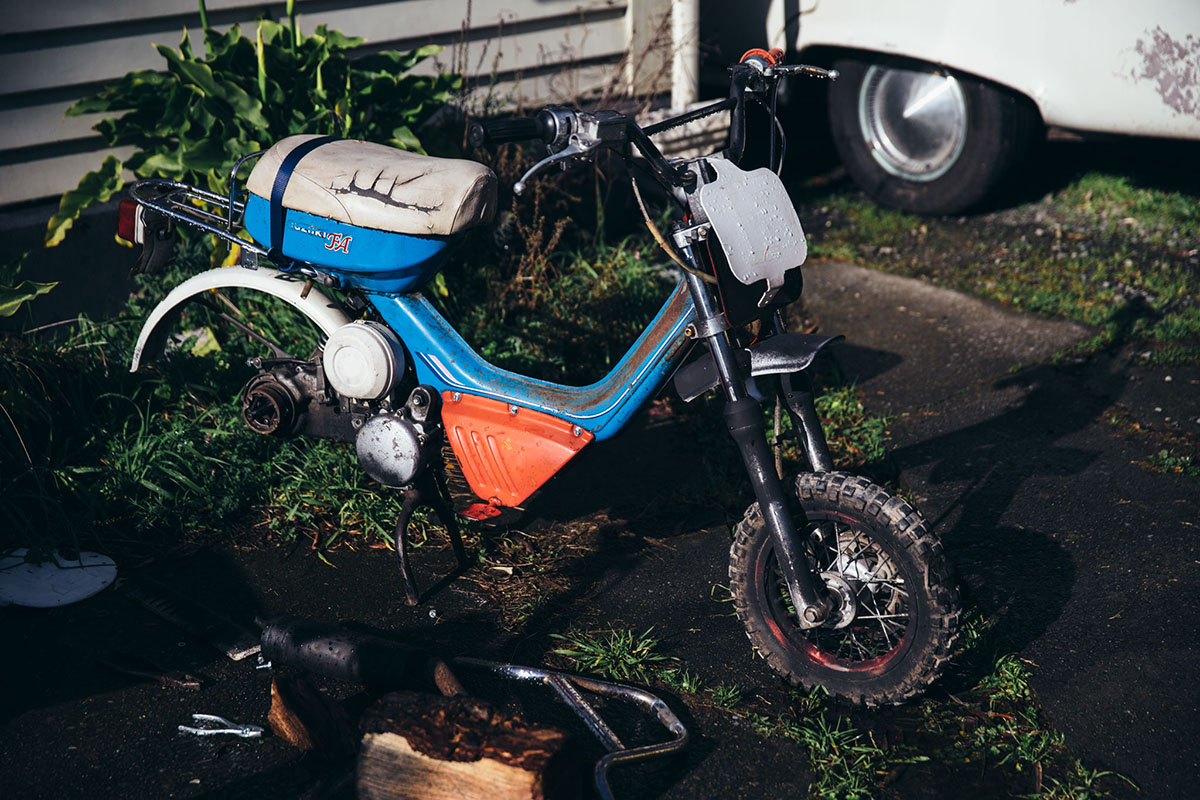 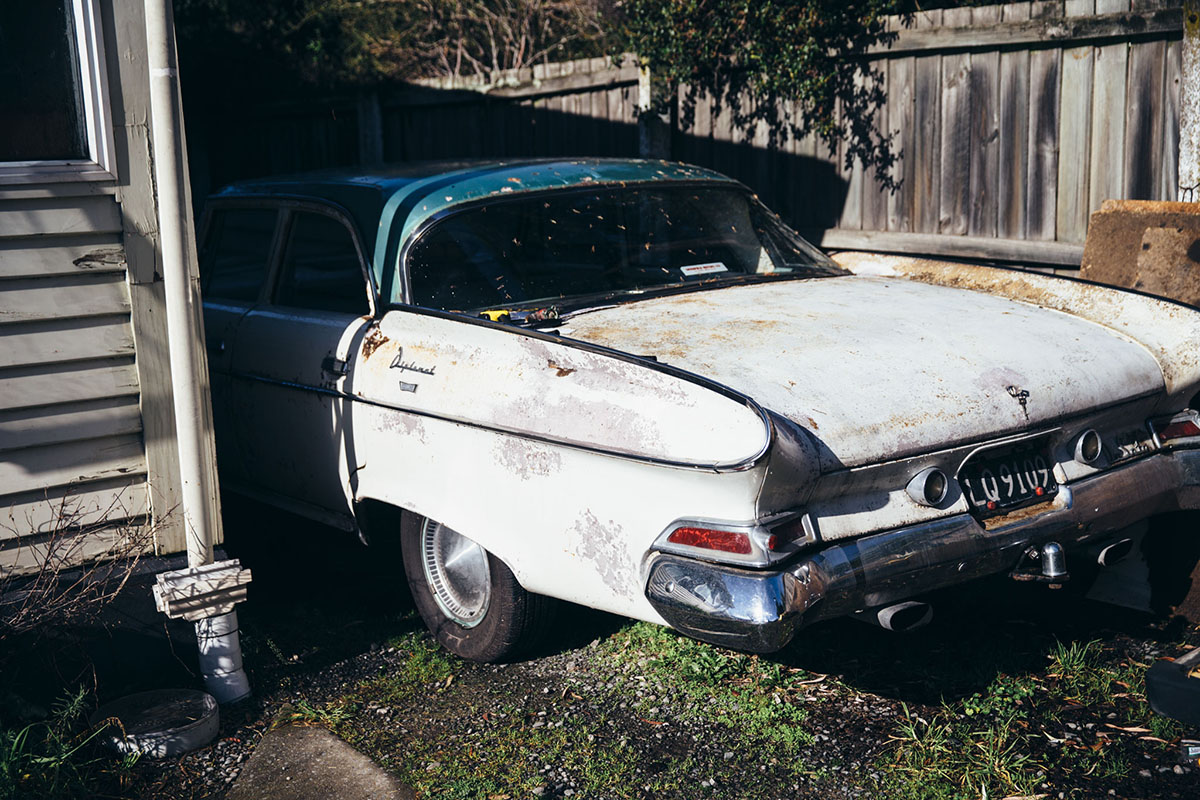 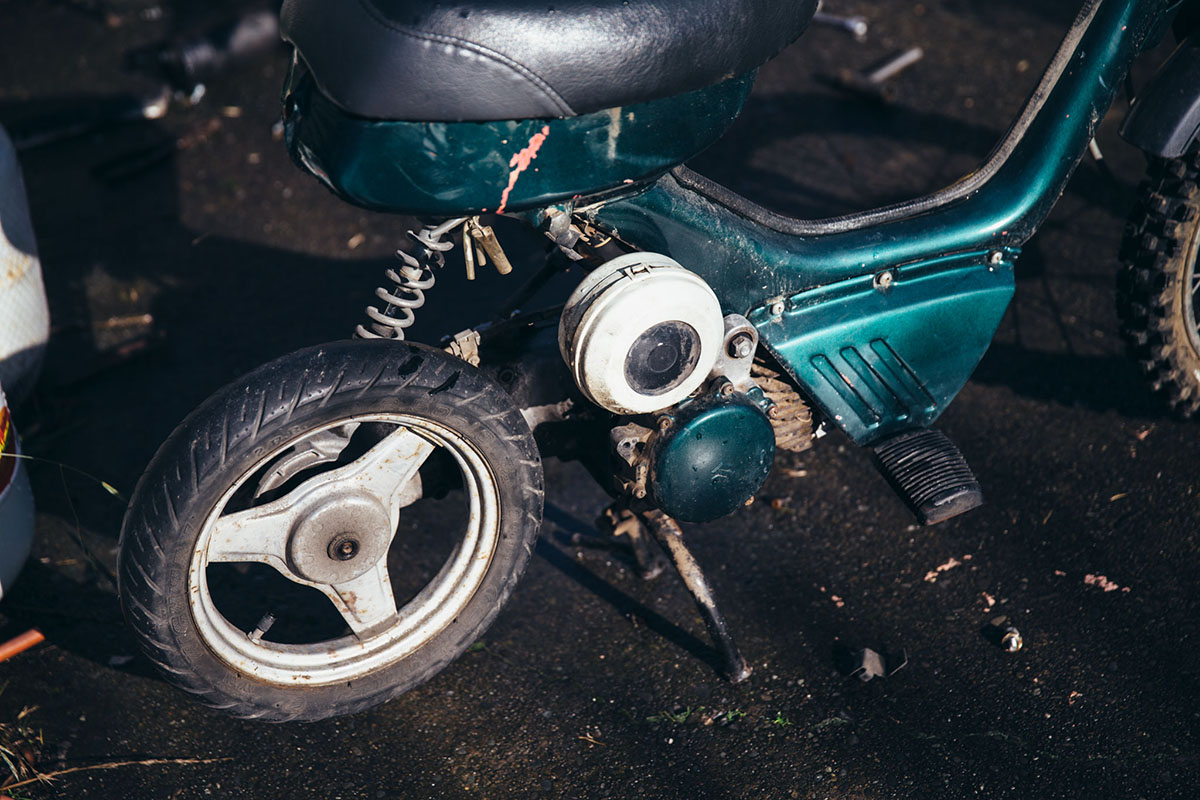 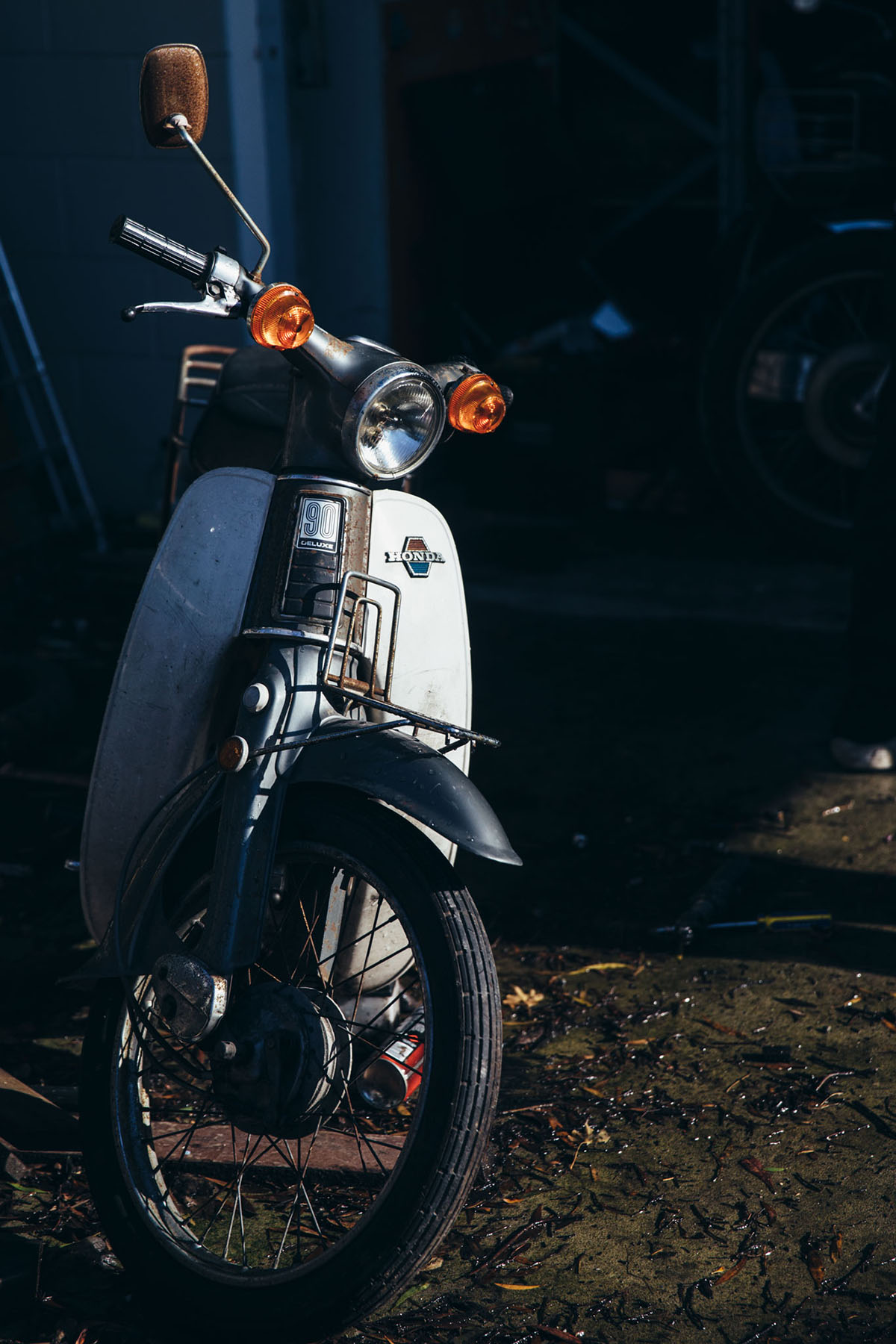 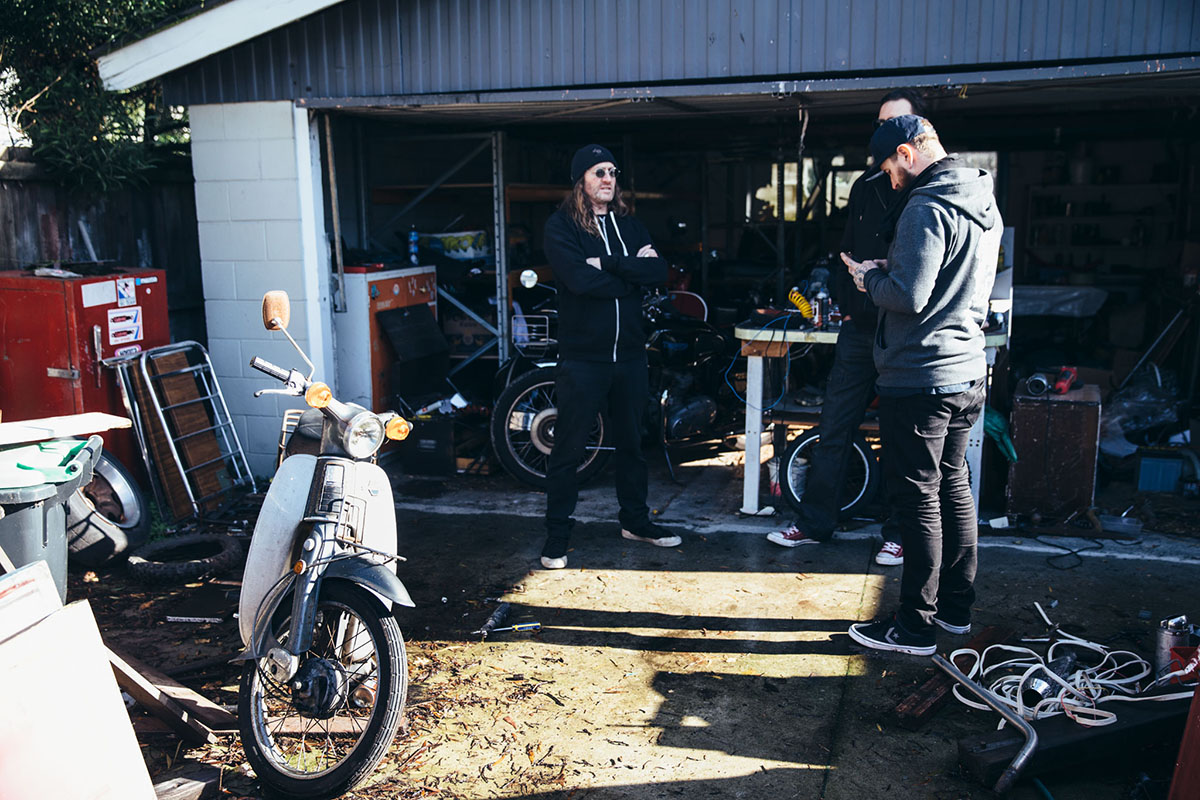 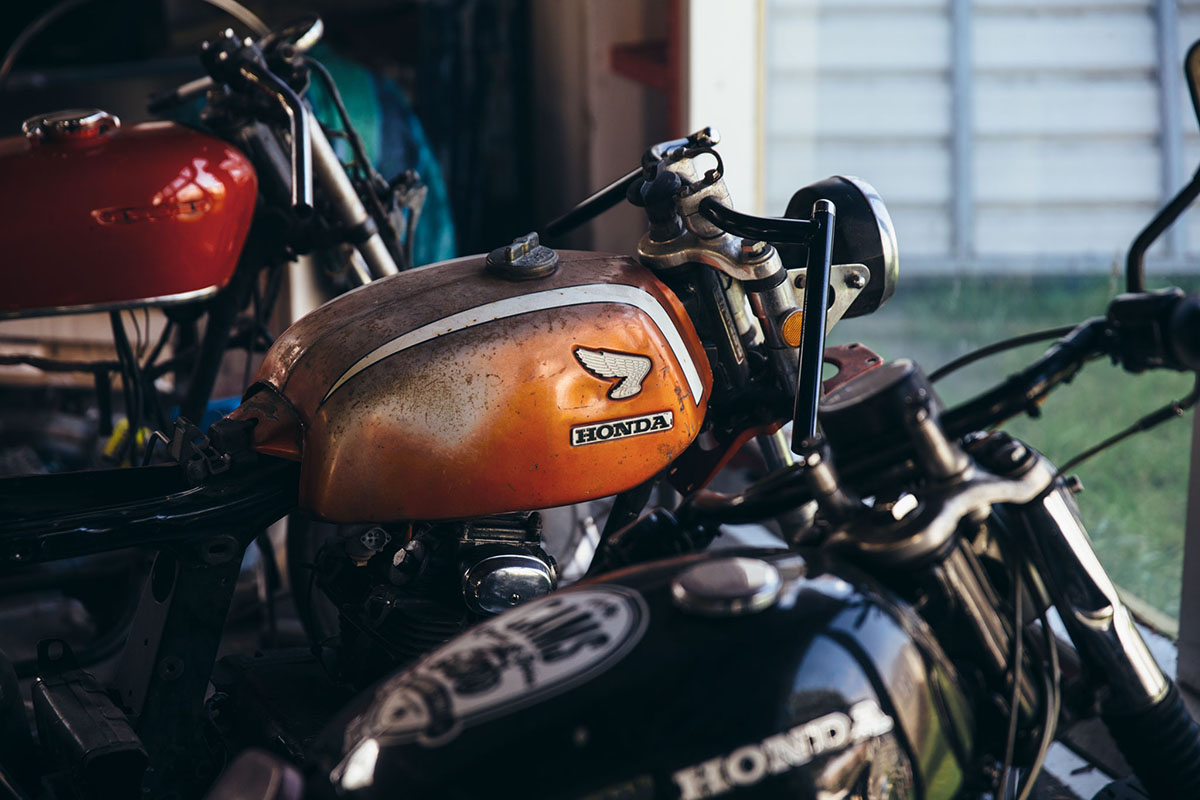 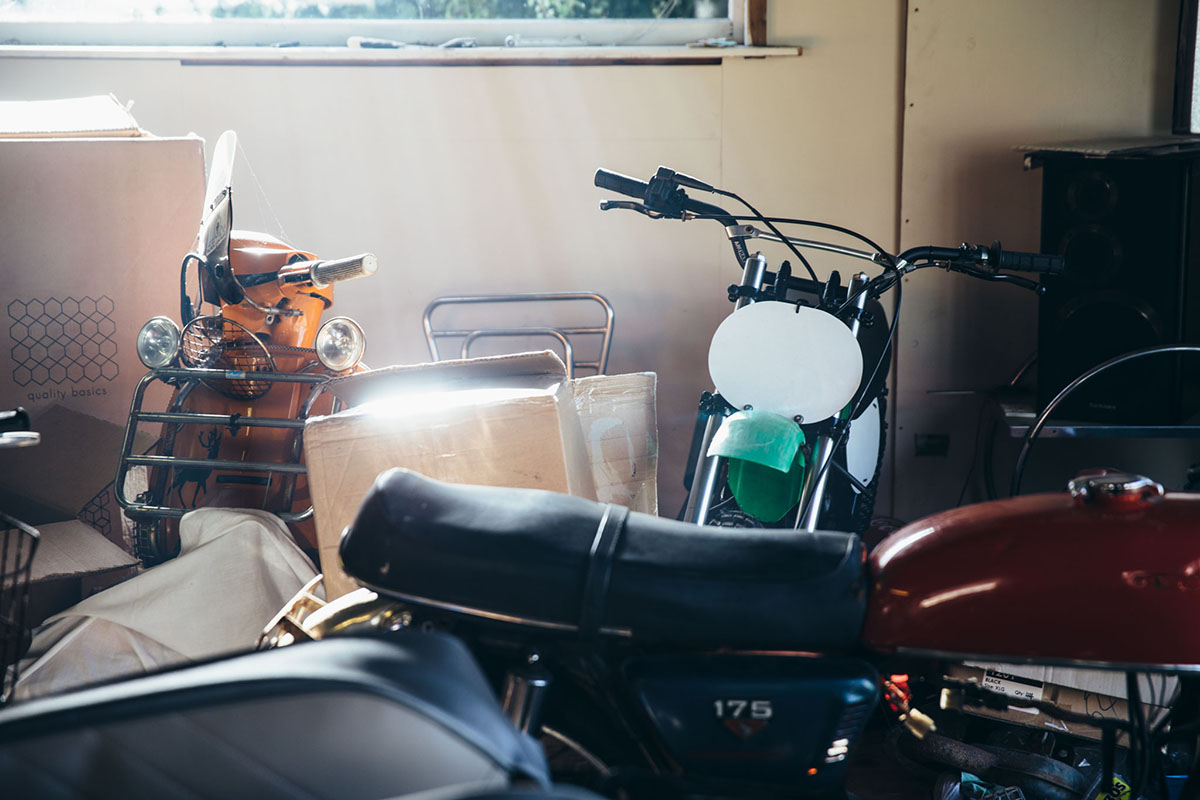 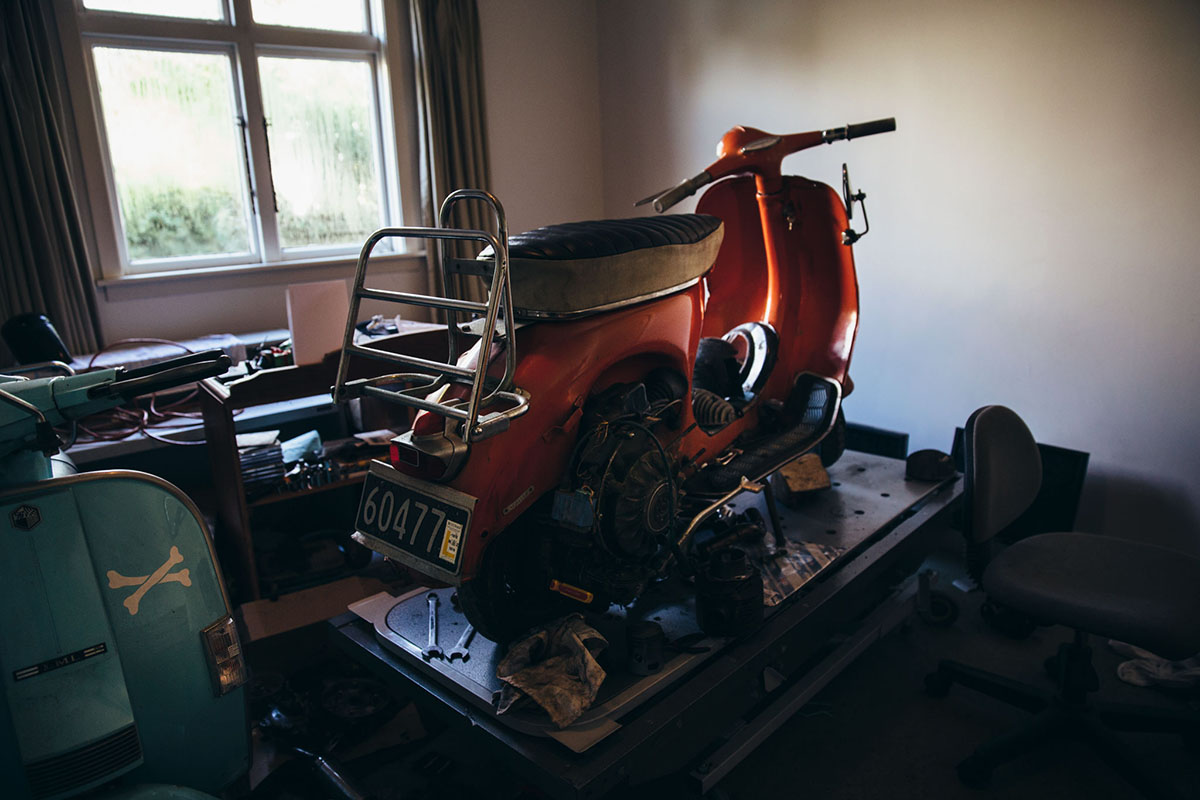 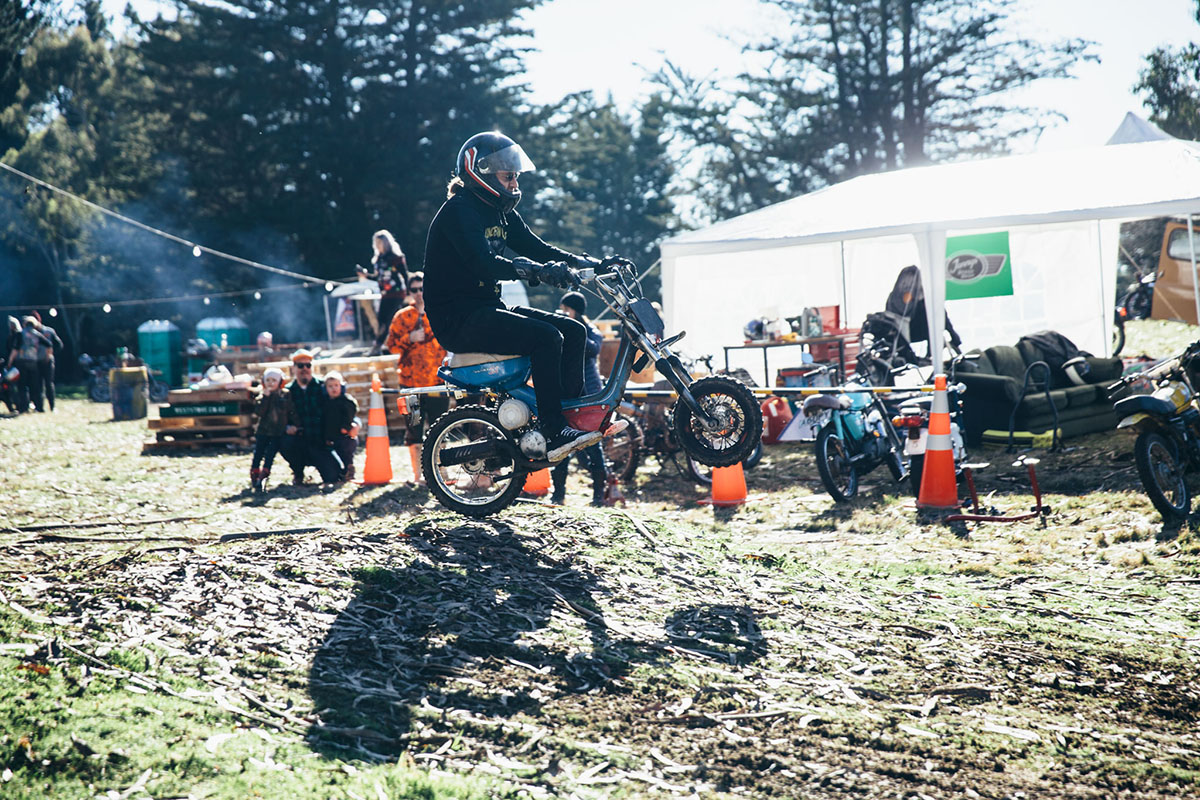 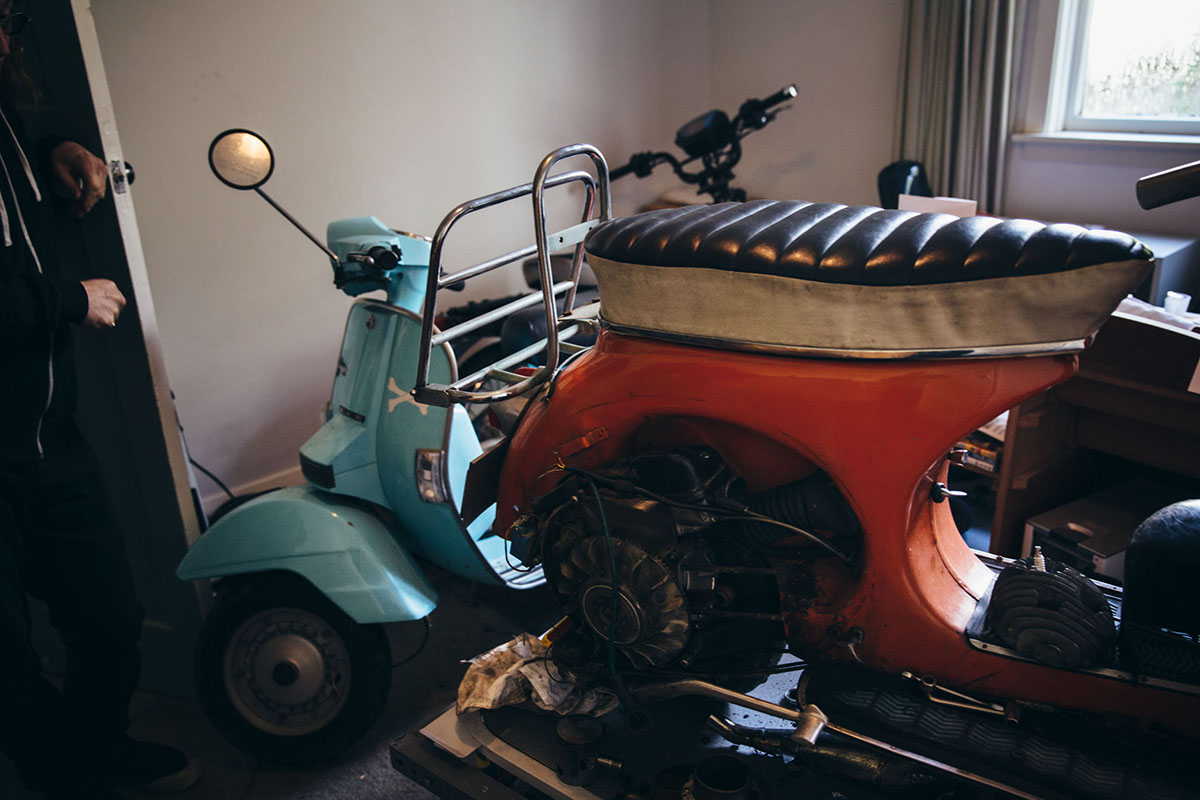 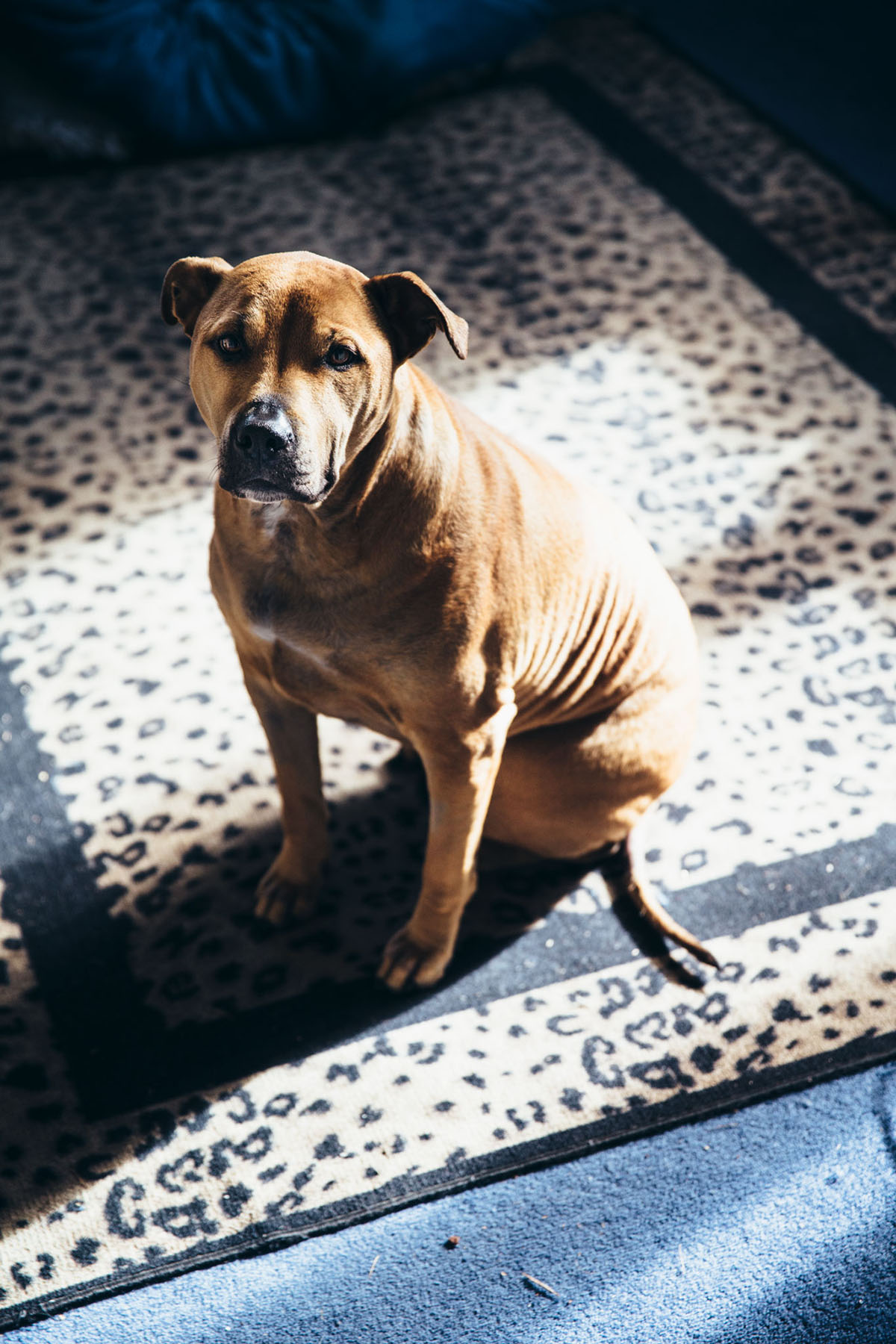 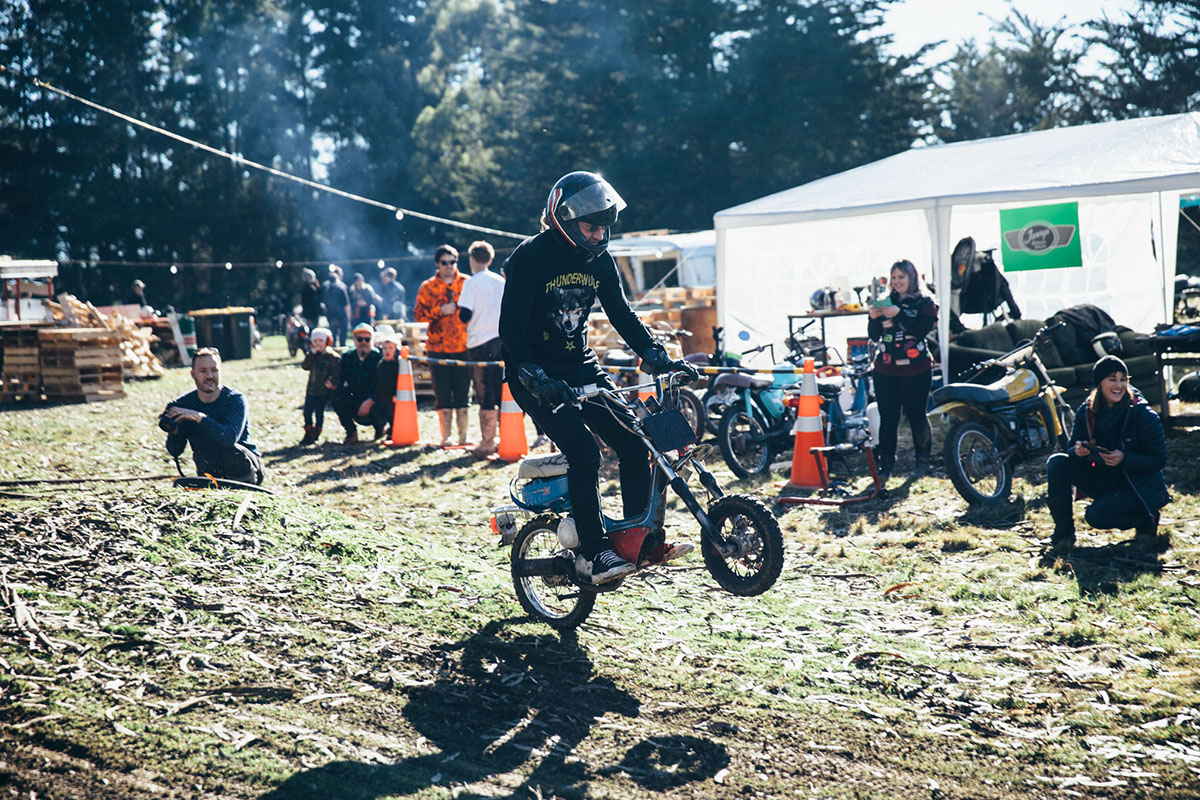