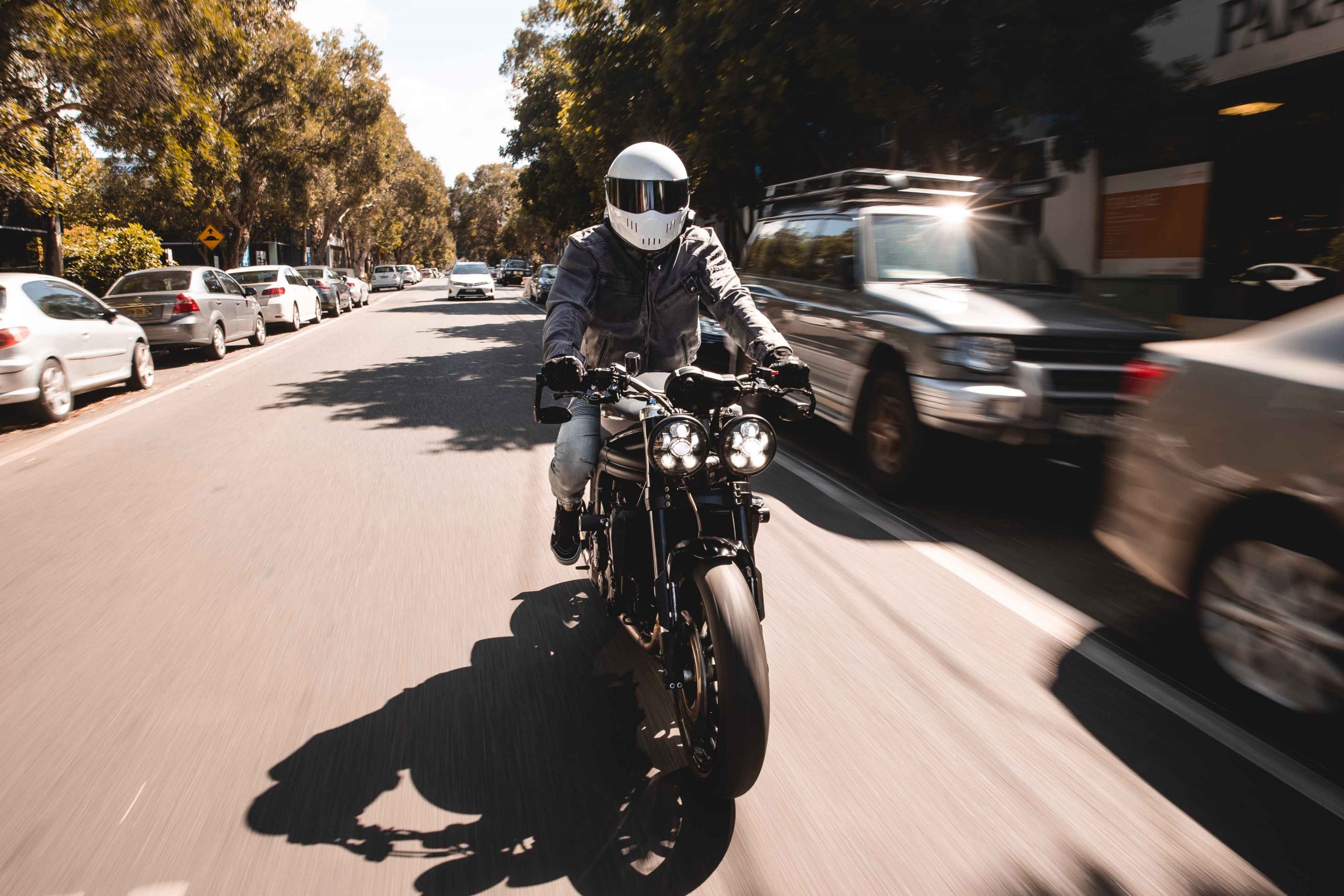 IT’S THE THIRD TIME we’ve been stopped this morning. “Is that a Speed Triple?“

“Yes sir, it is. In fact, it’s a two-thousand-and–eight Triumph 1050CC Speed Triple named ‘Bruce‘; but it’s had some work done…” So where do we start?

It’s 10am on a Wednesday morning, the first time it hasn’t rained in a week; so naturally, today is ride day.

As we pull away from the garage, Michael opens her up. The stock muffler – conservatively packed for the consideration of the common folk – has been ostentatiously deconstructed; chopped, stripped, and reassembled as a ruthless miniature muffler straight pipe. It now appears as half the length, tucked in neatly beneath the footpeg.

The previously white tank has been stripped and resprayed in ‘Stealth Grey’, the same shade of grey as used on the Ford Raptor dual-cab utes. Michael commissioned Laurence at Collide’a’scope to paint the tank and add some Triumph decals beneath the clear coat, which lends a nice touch.

The thing that really strikes me about Michael’s build though, is its finesse. The modifications are subtle, yet effective. Sleek, yet aggressive. Nothing is crazily unfamiliar from the original design, and yet it looks like a completely different bike. It’s almost as if all the features were meant to be this way.

As we pull up to Precinct 75, Michael begins to tell me about the build.
“Almost everything from the tank, back, is custom… I borrowed a neighbour’s welder from down the street to make the custom licence plate holder… I haven’t done a great deal of welding before“. When I mention how good the welds look, a big grin spreads across Michael’s face. “It’s amazing how helpful a flappy disk can be!”

Michael elaborates, “The reason for this mod relates to the original number plate design.  Originally it sat under the seat above the rear wheel which worked fine. What I didn’t think about though was that I made my measurements based on the tyres on the bike at the time which only had 50% tread left on them.  After shortening up the rear a few inches and fitting new rubber, the plate was asking to be torn off by the rear wheel, it was either move the plate or stiffen up the suspension.  It’s already a pretty firm ride, so I got thinking.  I decided to make up a bracket out of steel tube which mounts in 2 places (to the chain tension adjustment bolt and the chain guard). I have also fitted a number plate light with the wiring running through the bracket tubing and up under the seat. It’s such a simple design and the plate looks like it is just hovering there!“.

The subframe is custom-built, giving this Speed Triple an aggressive single-seater stance. “I took the wife on the KTM once. We went for a rip on the dirt. I was riding pretty hard. After that she didn’t want anything to do with it. So there wasn’t much argument when I chopped the seat”.

With the option of a single-seat now on the cards, Michael went to speak to an expert, Wenley Andrews. “The guy is a wizard – he literally made the battery, radiator overflow, shock reservoir and rectifier all disappear (all hidden away behind a custom panel which encloses the engine bay). I gave him my designs and measurements and he pretty much produced exactly what I was after.”

It didn’t finish there though. As with every build, you hit some speed bumps. This was one such bump. Once he fitted the subframe up to the bike Michael realised there was still too much overhang over the rear wheel. “I got the grinder out and started cutting again.  I got it nice and short but this meant I had to remake the mounts for the tail light.  Also during this time, I dropped a car battery on the fibreglass seat pan, so I had to make a new one of them too...” *Note to bike builders out there, don’t drop your car battery on your new seat pan. It’ll fuck it up.

The leather seat is as comfy as it looks. The suede sides stick to your thighs making you feel locked in. This isn’t for no reason either. “I just carved up a bit of high-density foam to the shape I wanted… I went to Bad Arse Trim co with my seat design as I initially wanted a suede top and perforated leather sides, but he talked me into switching it the other way around as the suede sides offer extra grip in the twisties.” Good move Bad Arse – the suede sides are a game changer!

The airbox-gap is complemented by two custom side covers. Michael explains; “after having the new subframe fitted I wasn’t too happy with the amount of open space beneath the fuel tank and mainframe.  It gave the bike a delicate appearance and I wasn’t into it.  So I cut up some scrap steel plate, bent some angles in them and drilled a shitload of holes, then coated them in rust guard.” To achieve the bend, Michael used a grinder to cut a line down the backside of each piece of perforated sheet metal, before bending it in a vice to fit his specs. The tapered and bevelled finish of the covers adds to the aggressive aesthetic, and lens the placebo of additional aerodynamics.

The rest of the rear section electronics are neatly stashed beneath the sleek metal panel under the seat. The panel held firmly in place by three serious stainless allen head studs, so heavily over-engineered that it looks as though they would hold the rear swing-arm in place.

When I ask Michael why he ended up with the Speed Triple he tells me a cracker! “My wife Kat (who never liked the idea of moto’s) [Who knows why?] noticed the dirt bike sitting in the back of the garage collecting dust.  She suggested I sell it as it wasn’t being used.  I decoded this cryptic message of hers, and translated it to ‘Sell the dirt bike and buy a road bike’.  Great idea babe, a road bike certainly would get more use and allow me to do so many more activities.”

“I knew I wanted something naked, a street fighter, something upright and comfortable (after all I was coming from a dirtbike which is a very upright seat position).  I decided on the smaller 675 Street Triple and spent the next few weeks trawling through the classifieds.  Nothing really came up that fit the criteria and was in my budget.  In my late-night searches, I always noticed an ad for a wrecked Speed Triple but I always flicked past it.  One morning I thought I’d just give this guy a call to inquire.  After having a chat to the guy it turned out he had stacked the bike on the racetrack, he hit a left-hander too hard the tires dug in causing him to high side it.  Almost every plastic fairing on the bike was trashed, handlebars were bent, hand and foot levers bent/snapped, exhaust dented, seat shredded, tank dented and frame scratched.  To anyone else, it was a heap of shit, but to me, it was a cheap litre bike.”

After looking at the price of factory Triumph parts, Michael changed his mind about trying to restore it to factory form and decided to go to the custom cafe route. Even the parts that had survived the crash didn’t stand a chance. “I hacked away at the factory front wheel guard with a grinder and file and cut away about 50% of the material to get something simple, clean, and tidy looking.  Then I got Lawrence at Collide’a’scope to paint it satin black and it has one of the nicest paint finishes I have ever seen.”

The Twin headlights are the original chrome lights just painted Satin Black and sporting new LED globes. They have been remounted closer to the triple tree to streamline their look, and hopefully reduce the bike from looking as much like Sid the Sloth after a week-long bender.

The indicators are Motogadget M-Blaze Pins. A tiny hole has been tapped into the wall of the radiator and held in place with custom made brackets. You certainly wouldn’t want to stuff that up.

For the Rear sets, handlebars, kickstand, headlight/speedo mount and sprocket guard Michael explains; “I had all these parts cerakoted in Tungsten grey by Sydney Cerakote (they even coat the bolt heads for you).  The parts were originally brushed aluminium and argued too much with other aspects of the bike.  I think the tungsten really ties them all in with the theme of the bike.” This, coupled with the miscellaneous Billet Aluminium parts – the brake reservoirs, levers, mirrors and clutch adjuster – ensures that everything looks nice and neat!

When I ask Michael what he was trying to achieve with this build he tells me; “I wanted something that stood out. Something that looks troublesome, powerful, and something I will be able to keep forever.  I know this bike like the back of my hand and can repair anything on it now. I’d like to think it’s finished and overall I think it is, but I am sure I will always have something more I want to do to it“. Well, I don’t know about you folks, but I’d say he hit the nail on the head! What a beauty; mean, aggressive, and fast-as-fuck.

So what’s next for Michael’s custom building ambitions? “At the moment I’m working on a new variation of my Hilux (4×4) Tourer.  Custom comp bar, custom canopy, custom airbox, snorkel, exhaust, turbo etc, SUS lift, body lift, 35” muddies.  Down the track, though I want to buy a BMW R nine T and build along similar lines to @thecafedracer.  My old man also has an immaculate Honda postie bike I’ve been aching to get my hands on“. To see more of Michael’s projects, be sure to give him a follow on insta @mikysuss.