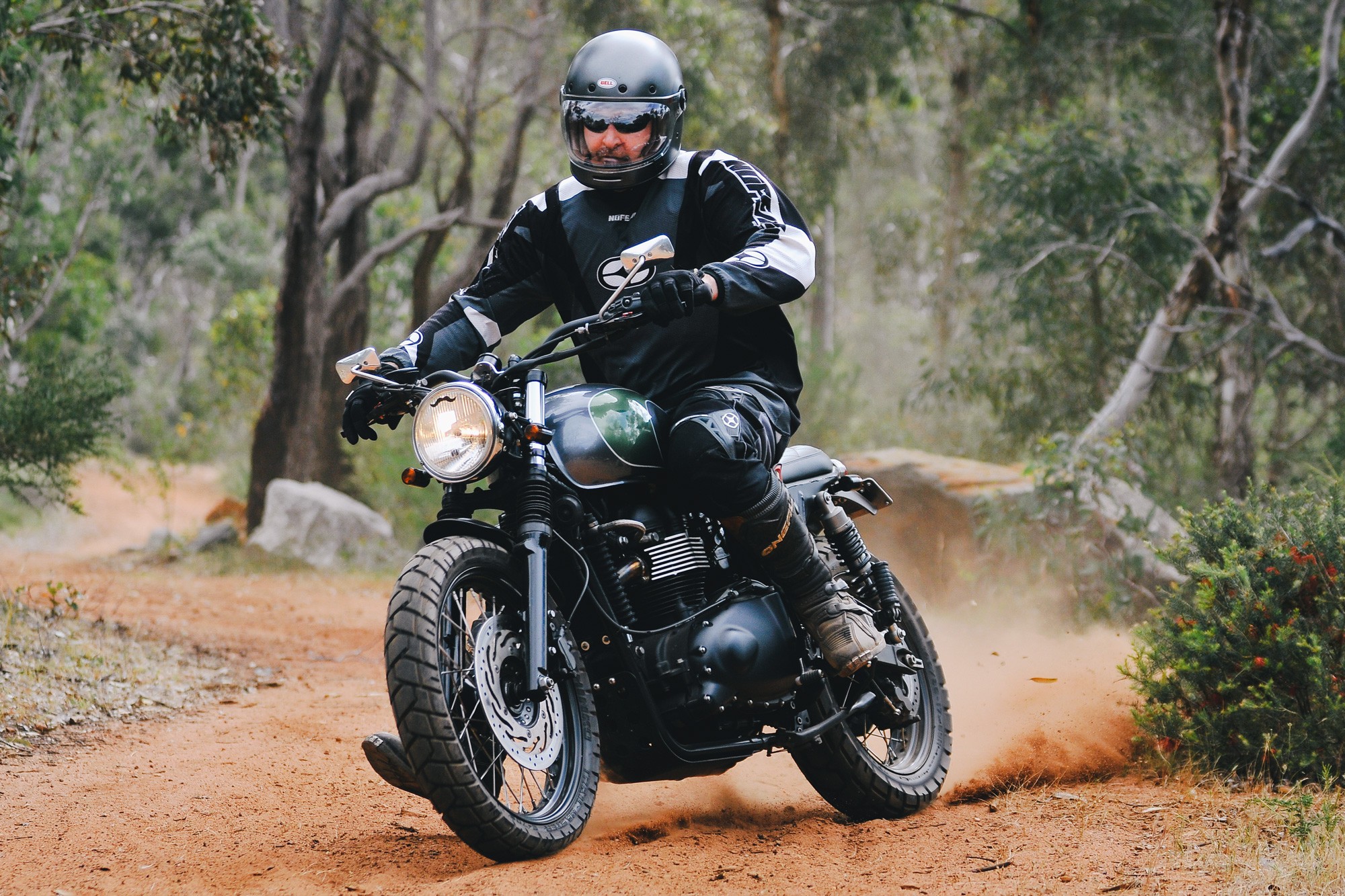 Greg’s brief was not unlike others when he paid 66 Motorcycles a visit. “Recapture the excitement of days gone by, when we had time to fang down some bush tracks after work on the road trail bike” The thrill of sliding the tail end out on some bends while making lots of dust was a sure way to leave behind the 9 to 5 grind. The final product would be the wily machine known as Moly B.

A bit of a late starter to motorcycles at the age of 25, Greg got stuck into dirt bikes along with his nephew who was 12 at the time. “I picked up a TS185 for him, and for me an XL500 which I named ‘Bastard’, as it was a complete bastard to ride; you had to hang on and go wherever it wanted.” 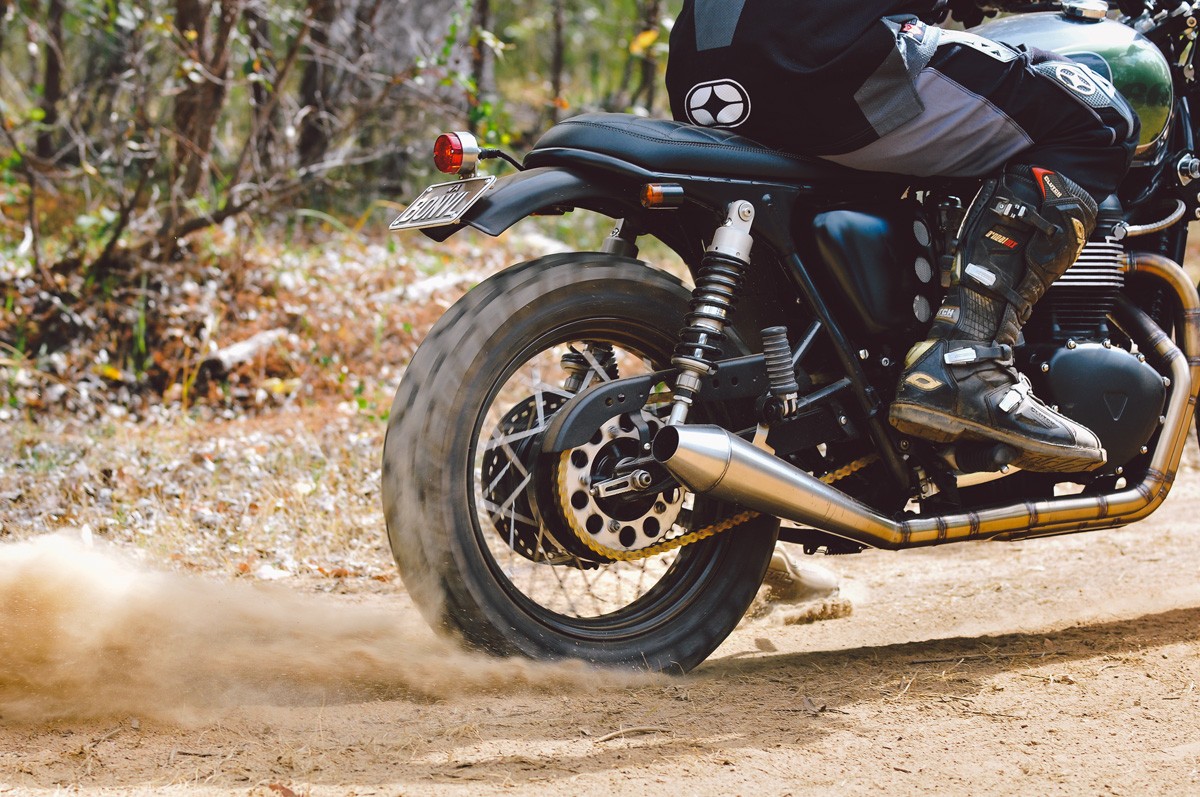 From here, after gaining his open class licence it was time for many and varied 2-wheeled machines. “It was then that I picked up my brother’s Z650, which was a great hill climb machine. I owned a few road bikes followed after that, but it was back to dirt bikes the age of 35, just after the birth of my Son. The theory being it was safer to be flying around in the Perth hills on pea gravel than it was on bitumen!”

Greg admits, if we were to list every bike that came and went in his life we’d be here for a while – and we’re sure none of you reading his have bathroom breaks that long. Greg had an itch that couldn’t be scratched, and while discussing ideas to customise a Thruxton with Pete Ellery from 66 Motorcycles and a few emails, Greg turned up at Pete’s doorstep the following week with a 2010 Triumph Bonneville T100. 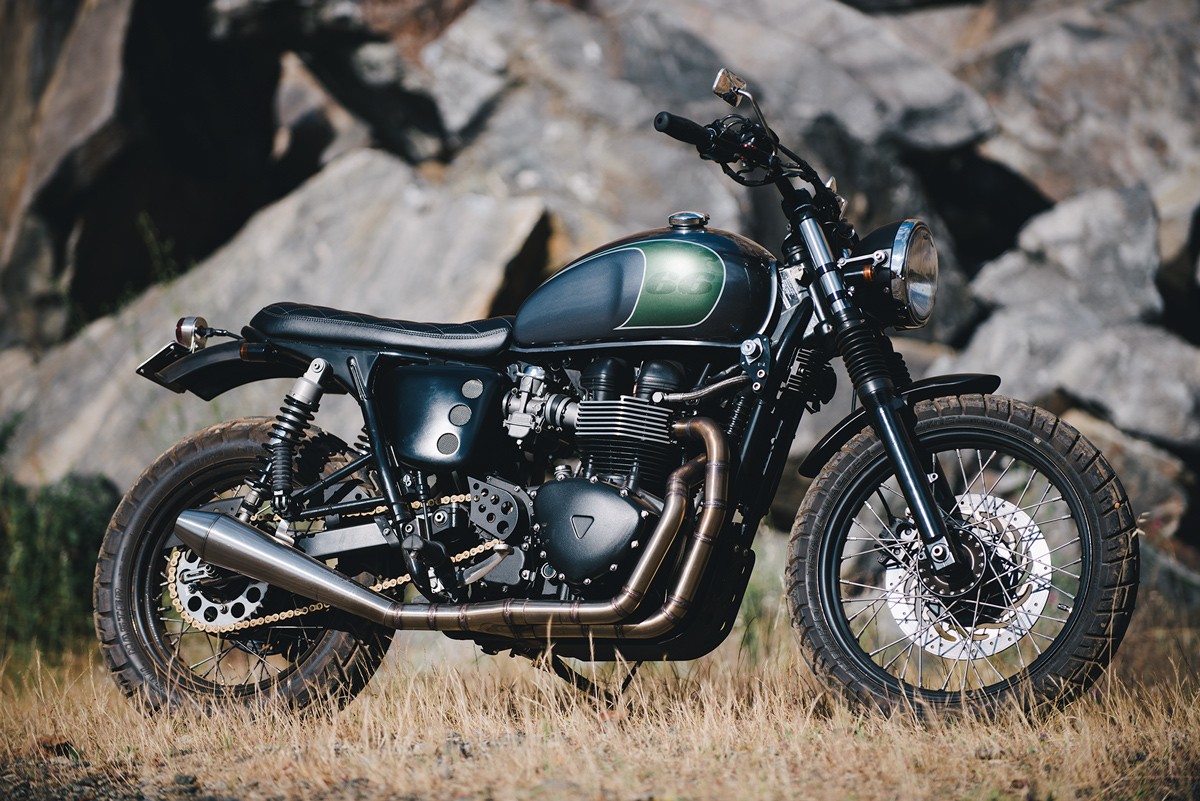 “Greg had ended up selling his Thruxton and picked up a slightly shabby Bonneville to be turned into his nostalgic street tracker. Greg wanted a functional bike, which was low key and could blend into a crowd without saying “look at me!” That is until Moly B does catch your eye and you pick up on the subtle mods which make you appreciate that this is no ordinary road going Bonnie.” – Pete

“We started with shortening the rear subframe with a slightly kicked up loop and bobbed 6” guard. The seat, which is good for the occasional two up riding is made from hand formed ABS pan and diamond stitched by Beyond Trim. The original wheel package was showing its age, so the rims and hubs were powder coated in black and then relaced with stainless spokes. The Shinko 705 tyres give predictable grip on the bitumen and confidence when punting off-road. The chain and sprockets were also due so to complement the nostalgic look a BC retro sprocket was fitted.” – Pete 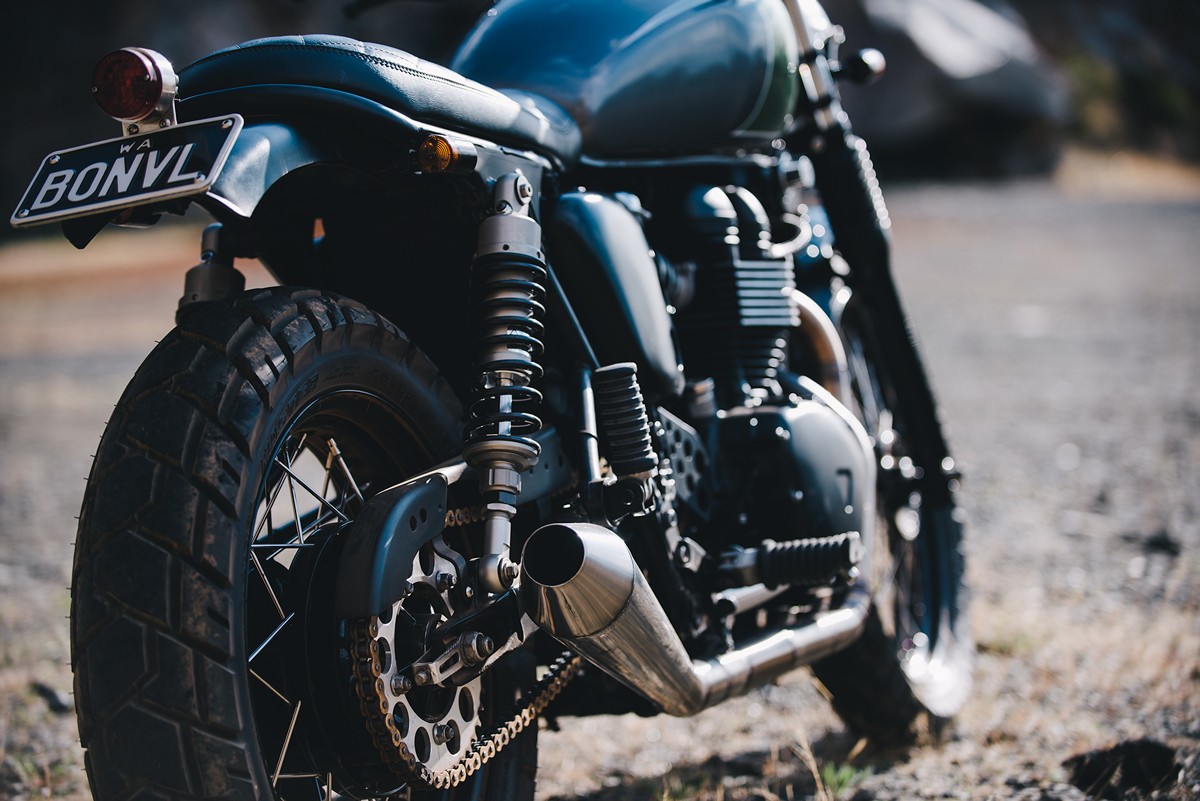 It’s definitely a machine that can happily roll through the streets and alleys of city life, before tearing off it’s mask and showing it’s grittier and dirtier side on the trails. Dubbed ‘The Molested Bonnie Tracker Project’ – or simply ‘Moly B’ for short… and the sake of political correctness. It’s namesake being inspired from a mate of Greg’s who commented, “Why would someone want to molest a perfectly good Bonnie?”

The inspiration and intention for this build would be a bike that is presented as something that is ridden and used, with a rider’s soul. This was an important aspect of the final build for Greg. “I wanted a bike that was made to ride and be presented in a classic street tracker style – it’s a bike that’s a perfect tourer, street bike and mountain goat. It handles well around the tight river run and hills roads, and it’s comfortable enough to spend the day riding either on or off road.”

“I love the bike at mid speeds around the Perth River and hills twisties, the exhaust note and power delivery in the mid range are a heap of fun. Although not something I do often enough the, off-road on the bike is great fun.

We visited one of my old dirt bike haunts with a mate and his Bonneville Scrambler crossover in tow, dropped the tyre pressures and got on it and had a ball. 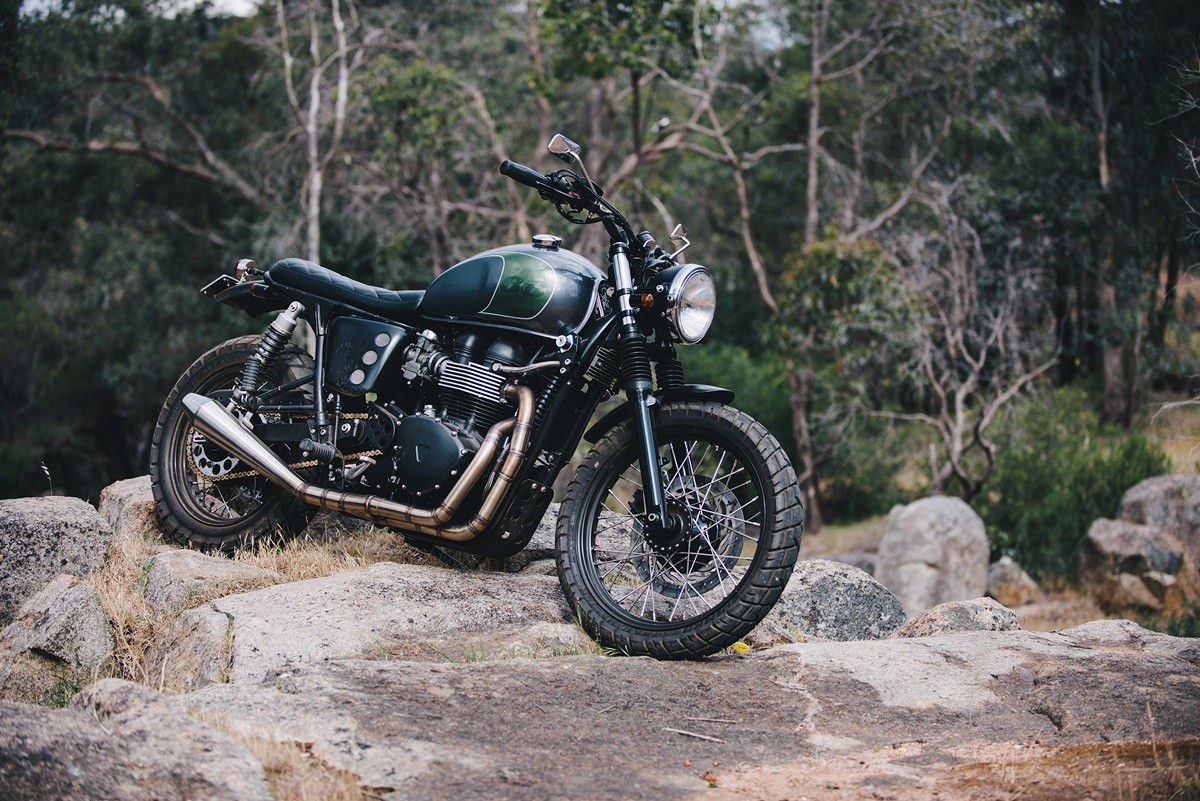 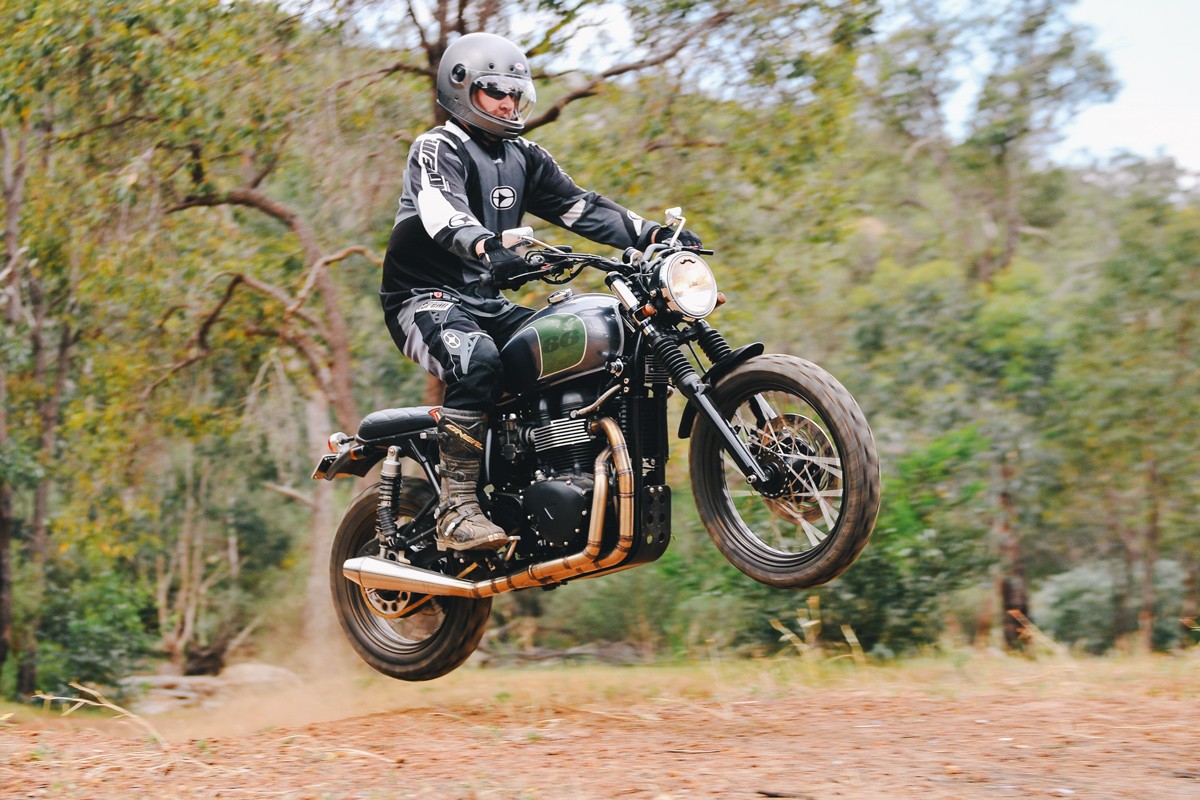 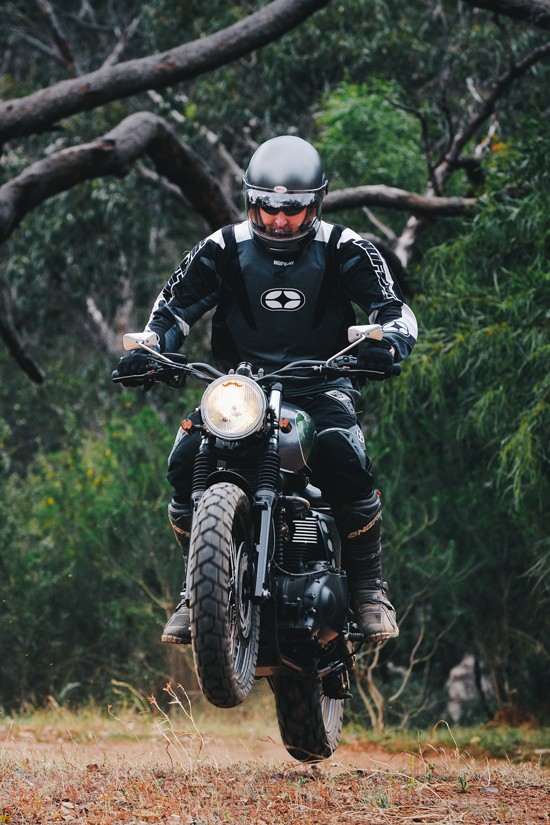 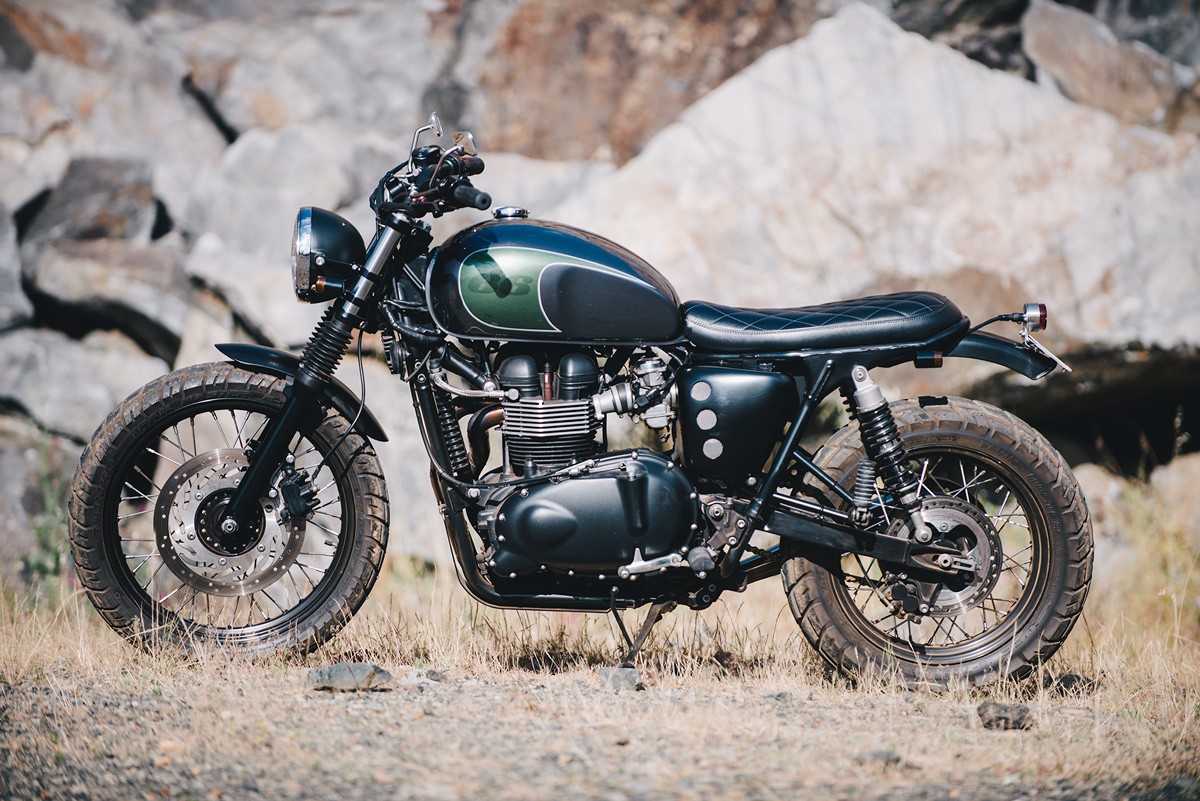 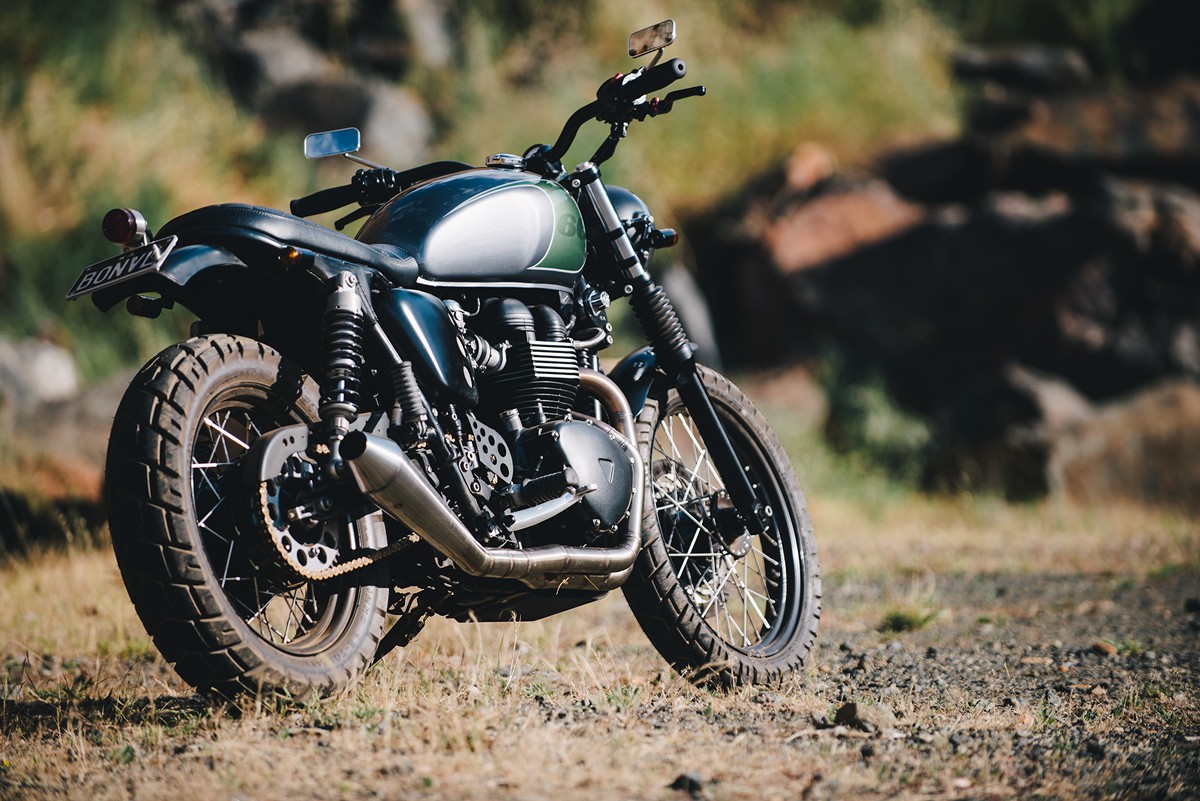 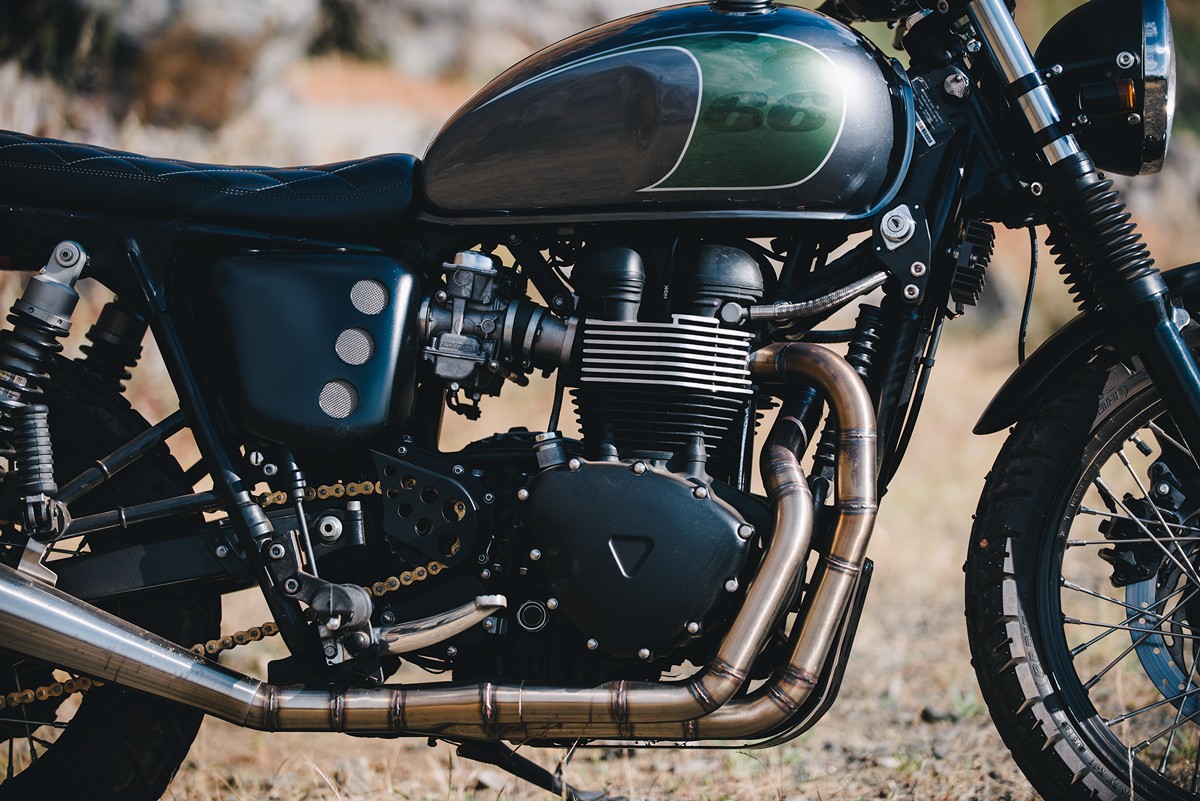 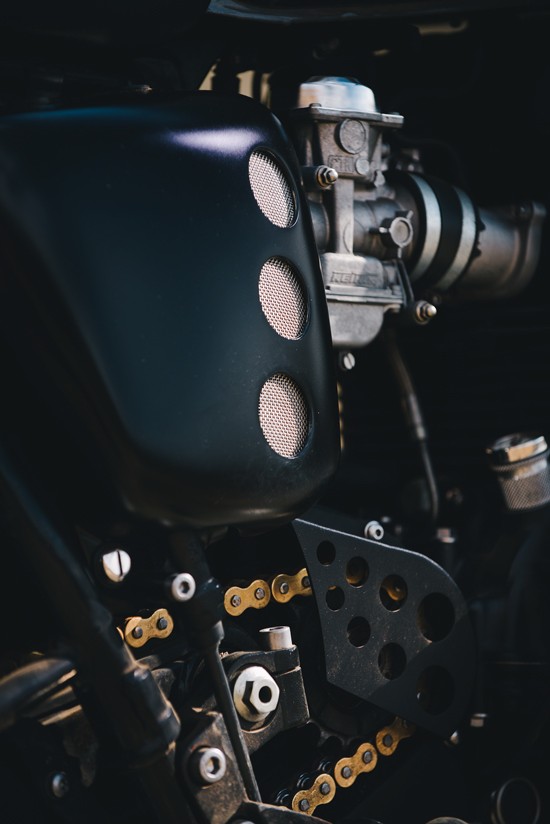 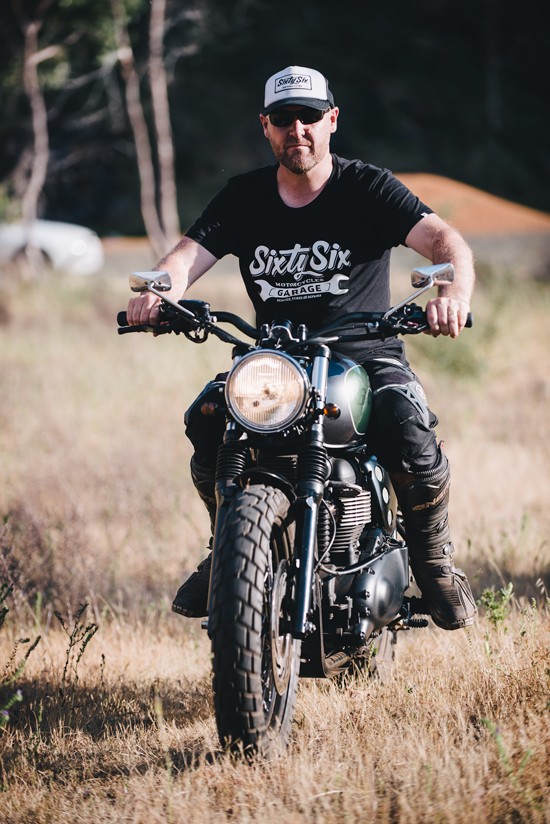 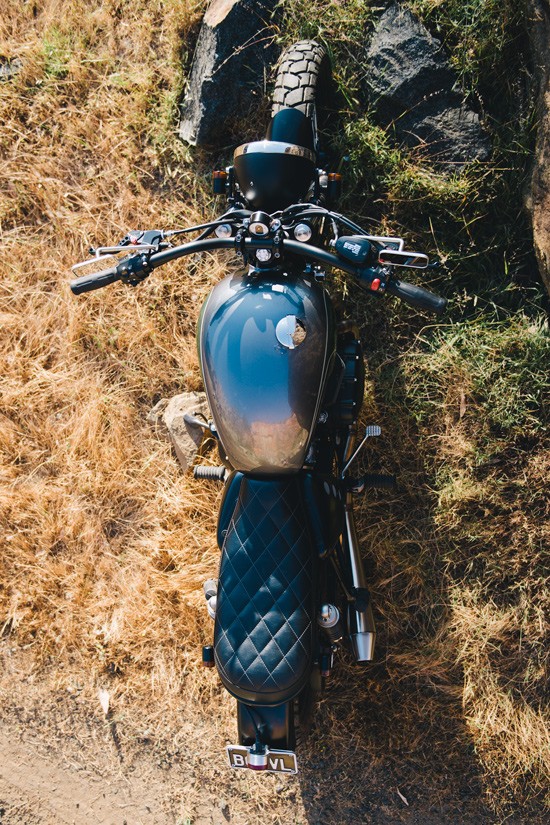 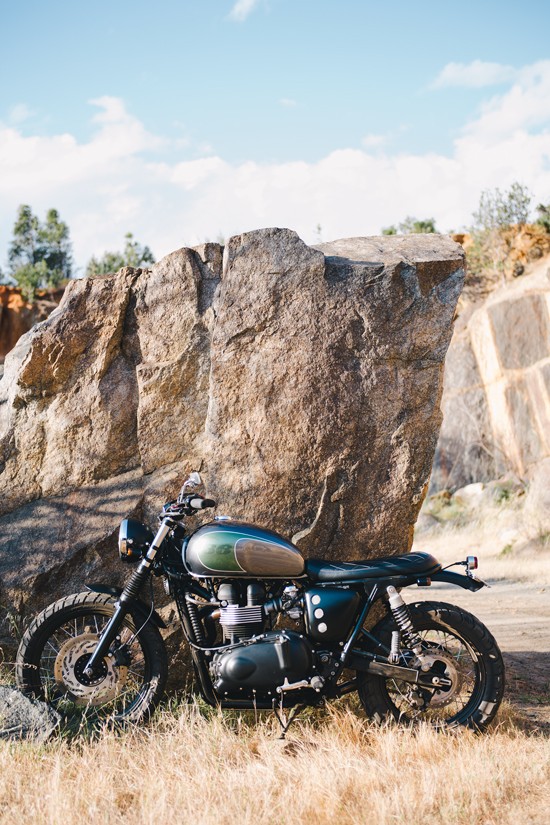 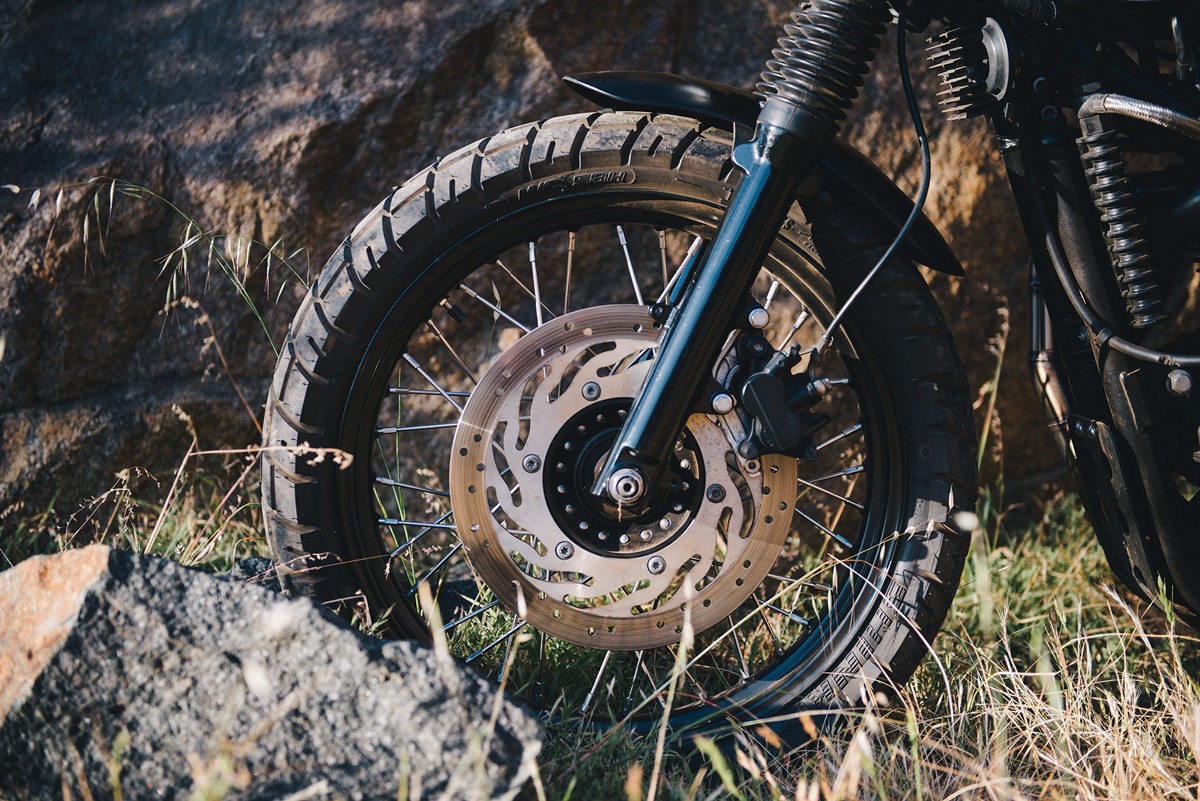