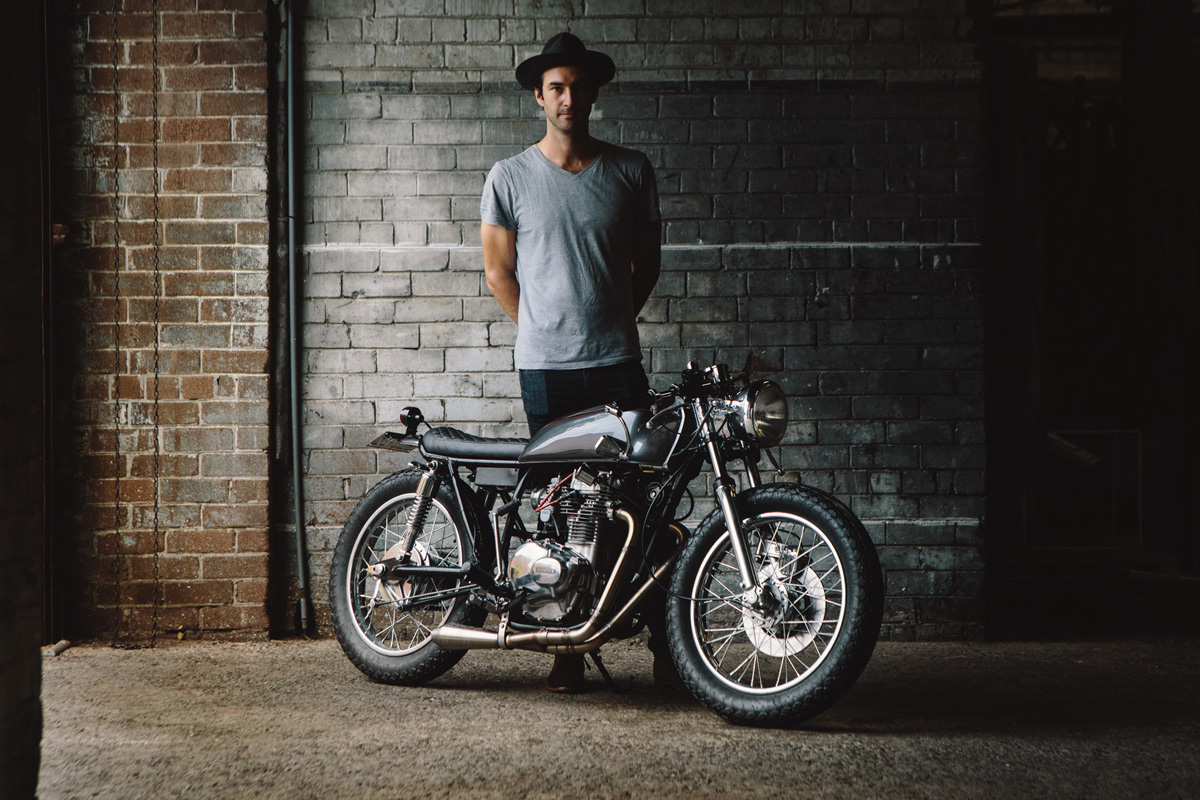 On the side of a small Mikuni carburettor sits the words “Not For Aircraft Use”, and thus Giles’ hopes at building 1/4 scale Lancaster Bomber to drop water bombs on Sydney’s wealthy were dashed. All was not lost however, as he found use for it on another nuisance machine. 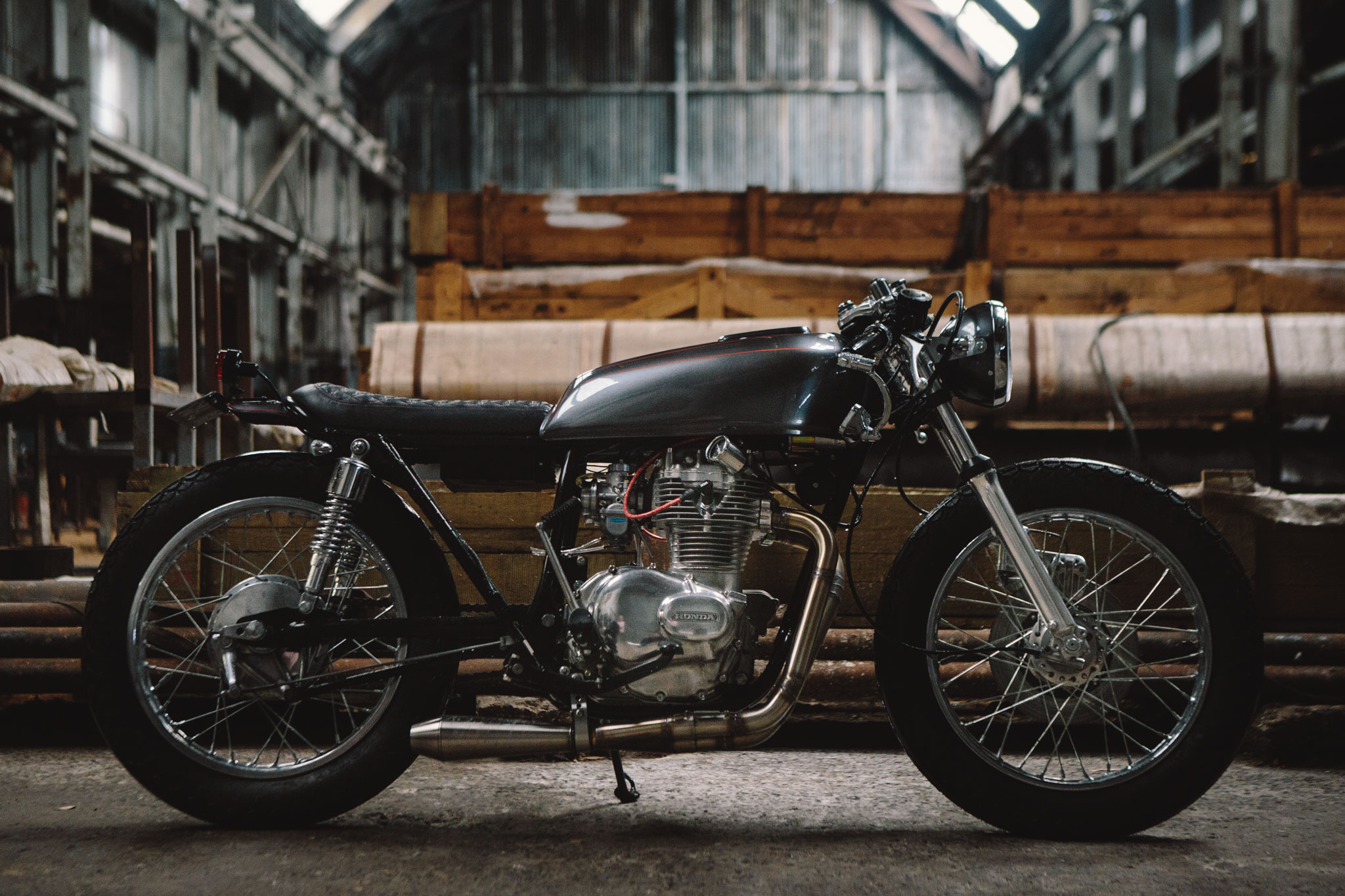 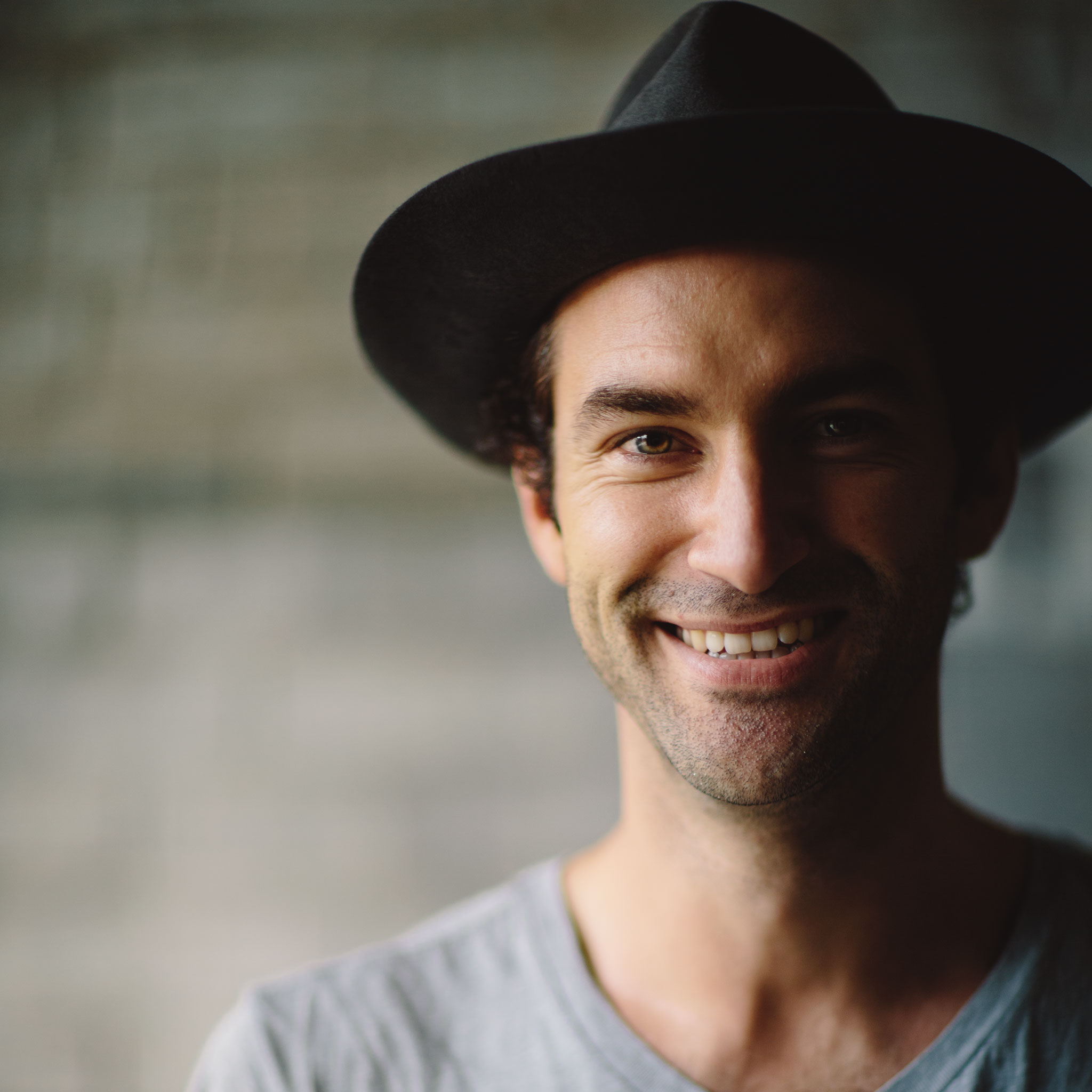 It took a good dosage of faith, the eviction of a wasp nest and 1000km’s for Giles’ to get his first bike, this now tidy and shiny 1976 Honda CJ360. A gutsy first start into the motorcycle world, purchasing a 40-year-old bike, site unseen on the Internet to work on with no previous motorcycle experience. “When I first made the decision to build a cafe racer, most of my inspiration had come from Dustin Kott and his Honda CB’s, so I had my heart set on finding a CB. I had been trawling the interweb for a couple of months and this CJ came up with no watchers and no bids. This told me it was either a pile of crap, or it wasn’t coming up in anyone else’s searches because it was listed as a CJ, not a CB. The bike looked in ok condition and, importantly, was complete although not running.” As it turned out the listing of the bike was no typo, and it in fact was a CJ and not a CB. The CJ model having been run for just one year, with only a few minor differences from its CB cousin. 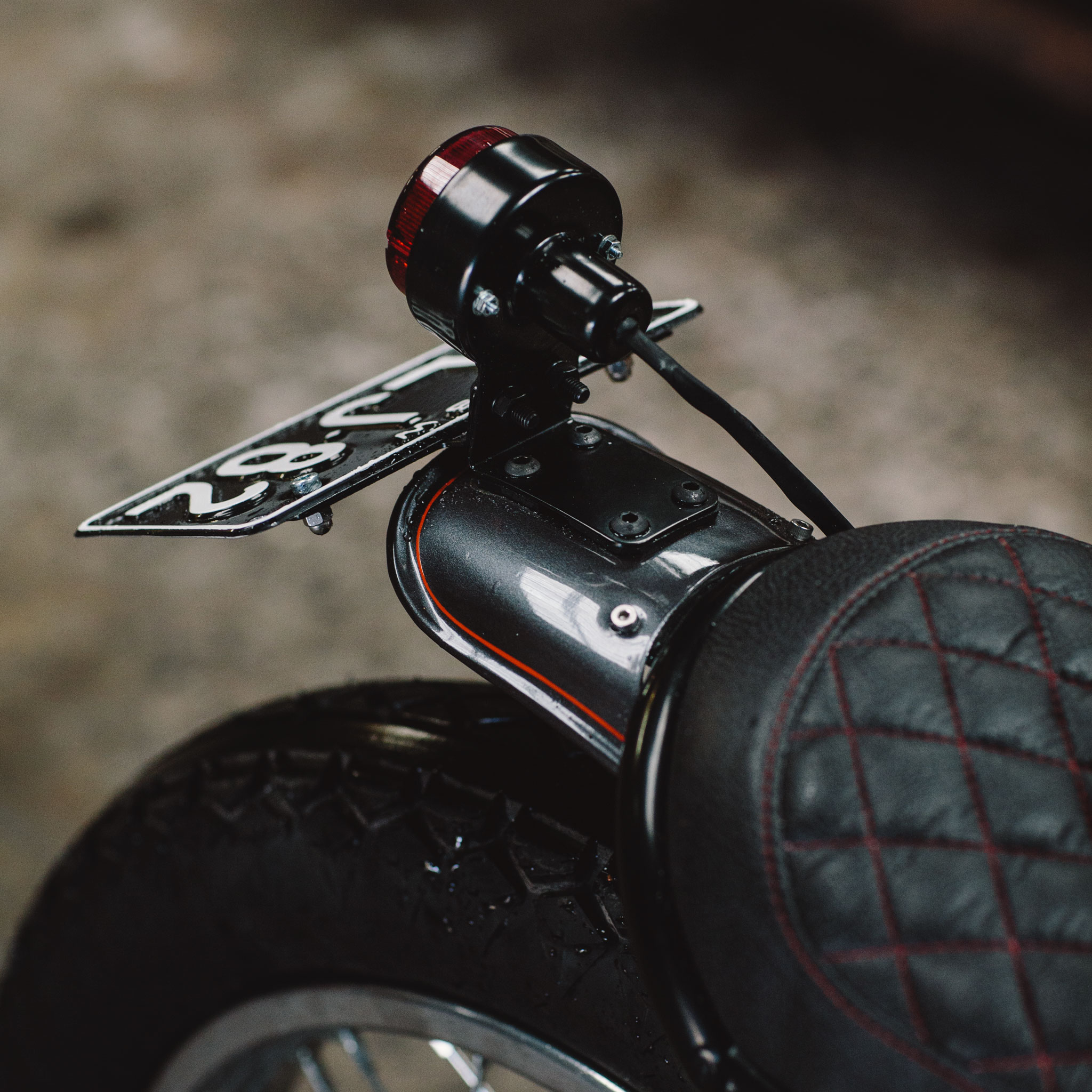 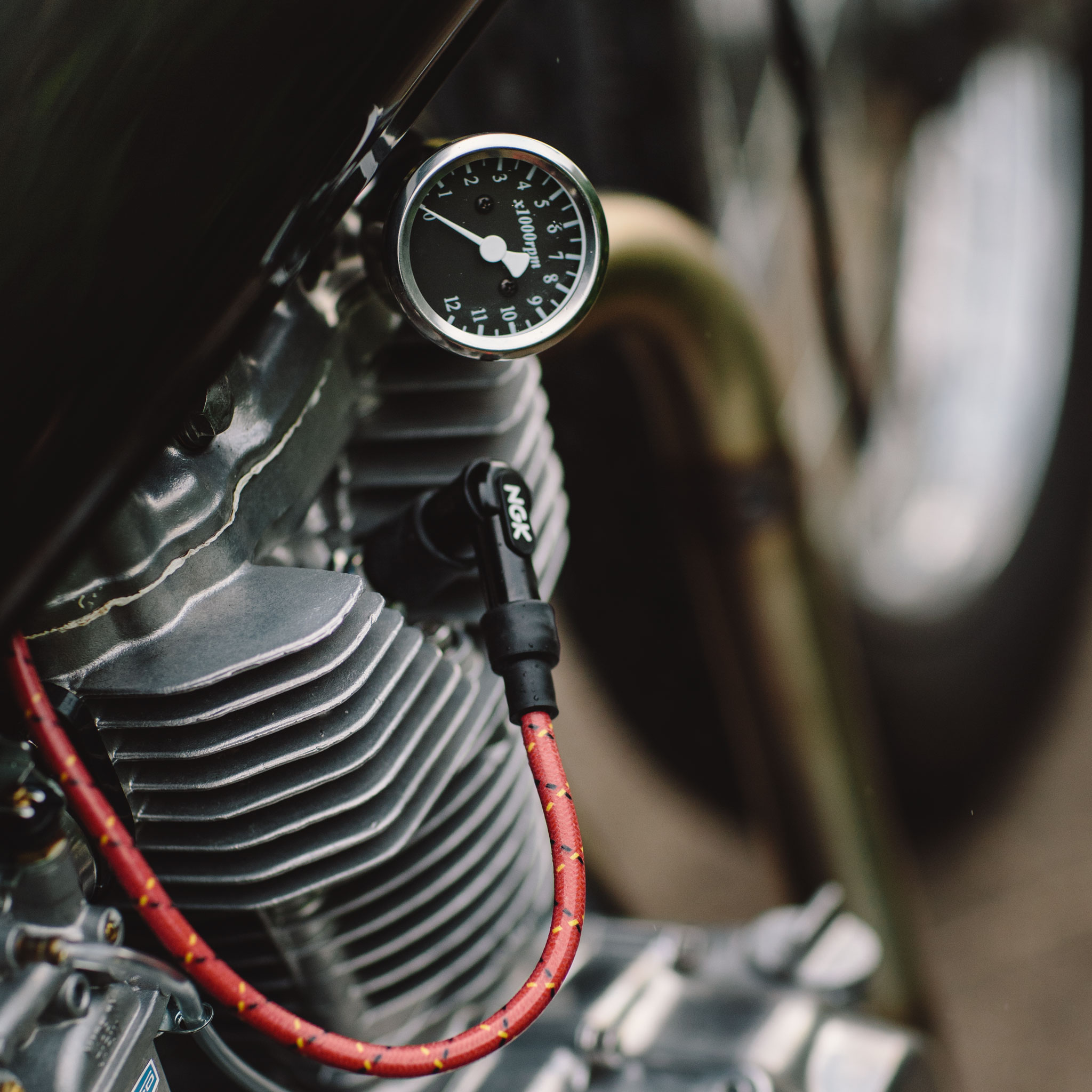 A full rebuild was on the table with this bike, but this was something Giles was prepared for. After a few anxious weeks, the bike arrived at his doorstep after making the journey down from Queensland. “The bike had been tarted up to look good for selling, that’s for sure. Wasps had made a home in the cooling fins of the engine, which had then been sprayed over with silver paint.” A rough beginning, but the bike was complete and had compression, so the canvas was primed and ready for a new creation to be made. 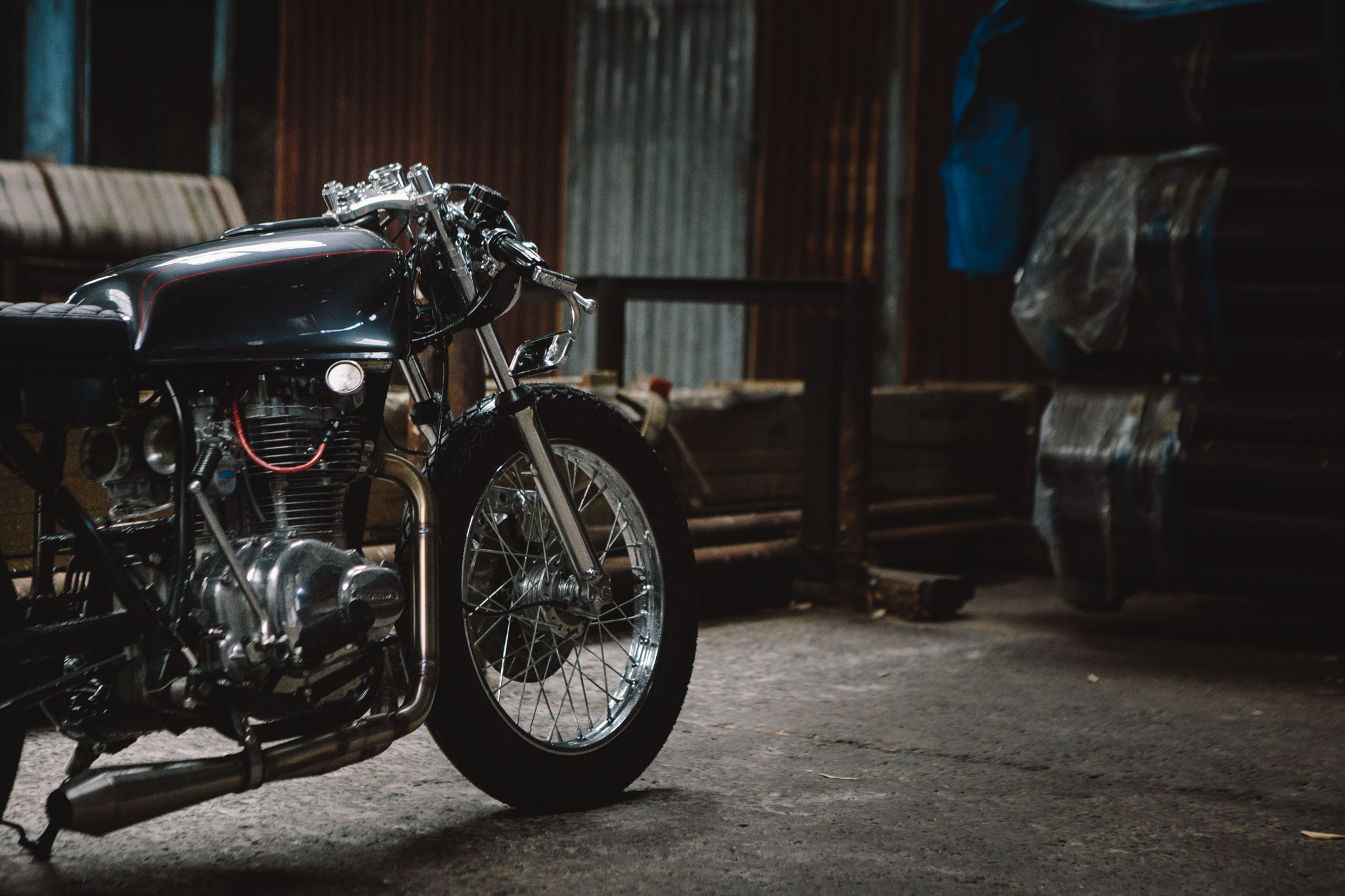 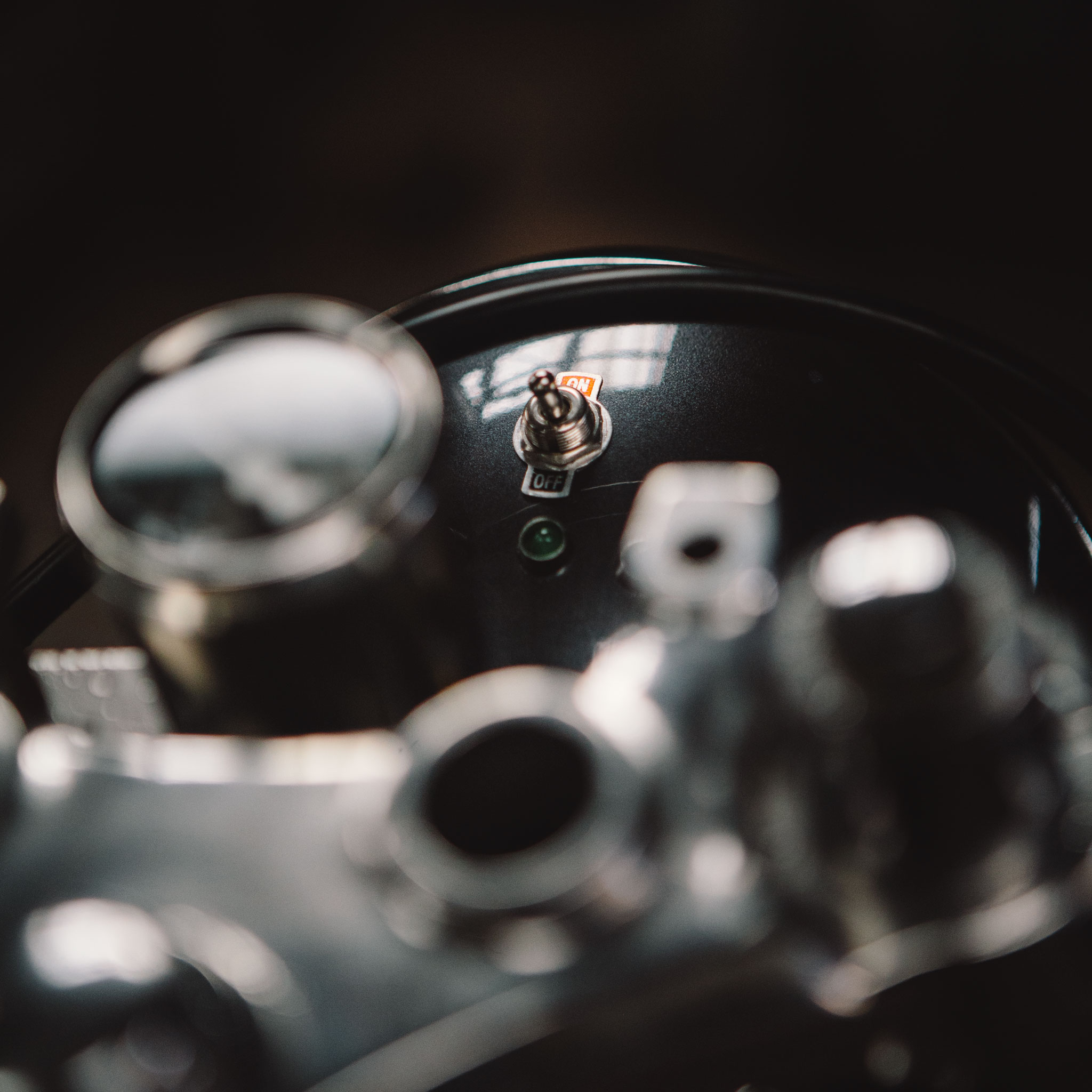 This wasn’t just Giles’ first build, but his first motorcycle ever. He was no greenhorn to engines and machines however. “Growing up I had always been a car fanatic, pulling apart and putting back together my Mk II Golfs and the like. Motorcycles are much more interesting to work on because you can get to everything so easily, and figure out how it all works.” 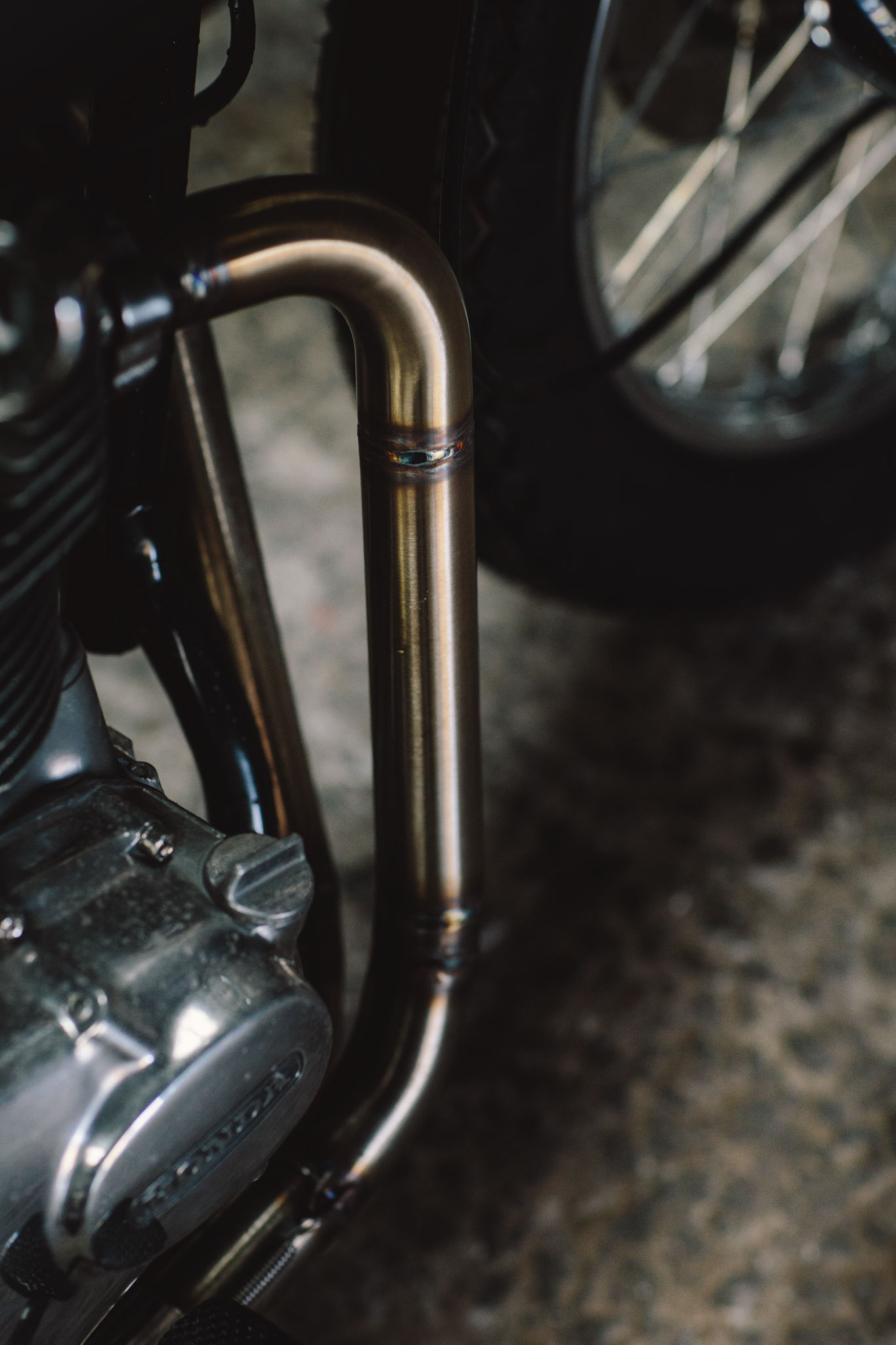 It wasn’t just ease of access in regards to parts on the bike, but also in finding a suitable location to work on his new project as he discovered an apartment can make for a good enough workshop. “I live in an apartment, but as you strip the bike down the individual parts become quite easy to handle. I was working on the frame and front forks on my balcony; and did a lot of the engine rebuild on my kitchen bench! I do have an underground car space, but the light is way better upstairs. Once the bike started coming together though, it made it a tad harder to carry upstairs so I got my car space working quite well for me as a little workshop.” 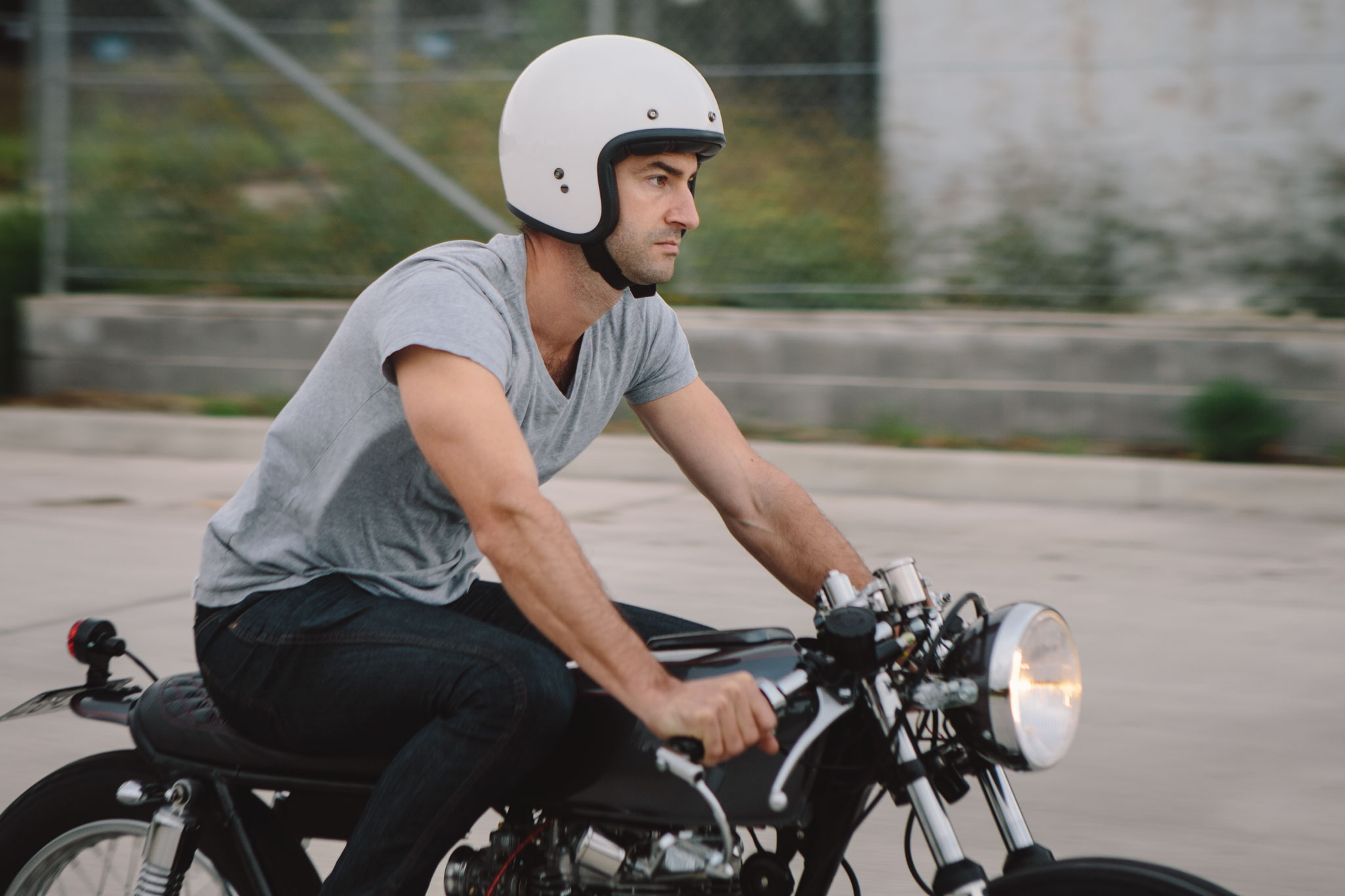 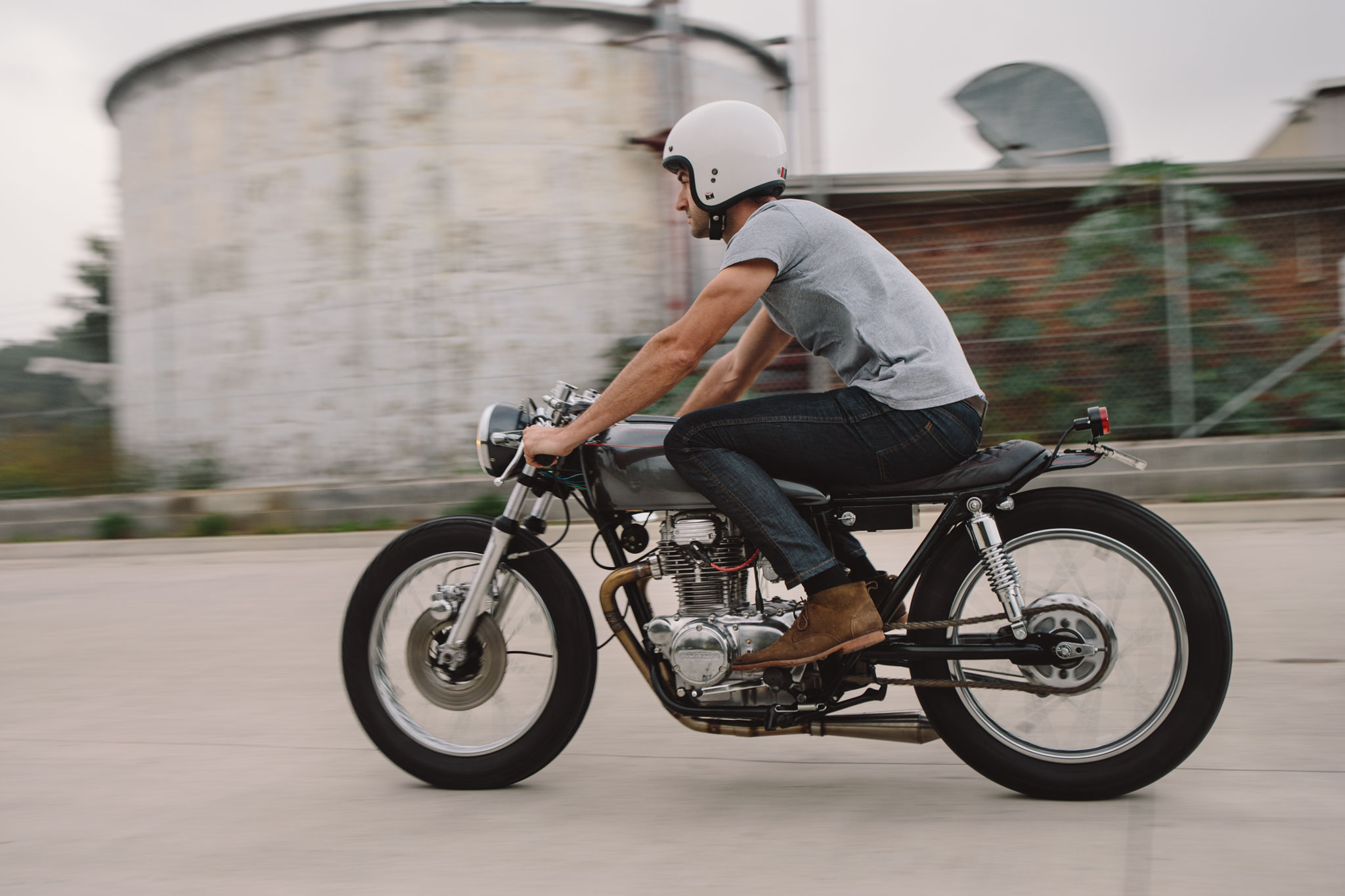 “I’m a bit of a perfectionist, so I knew doing a project like this would be a challenge to achieve what was in my mind! I knew there would be budget constraints, or practical and technical reasons I would have to compromise. All in all, it’s turned out almost exactly how I envisioned. As fate would have it, pretty much the day I took delivery of the bike a mate rang me and told me about Rising Sun Workshop, so I headed down to check it out. I actually don’t know how I would have done the initial teardown without RSW. Adrian was a massive help with guiding me on some key decisions, hooked me up with some contacts – including Sydney Cafe Racers, which I didn’t know about at the time – and generally being on hand, and an all round top bloke. I managed to do the full tear down before it closed due to their move, but then I was back to using my apartment as a workshop.” 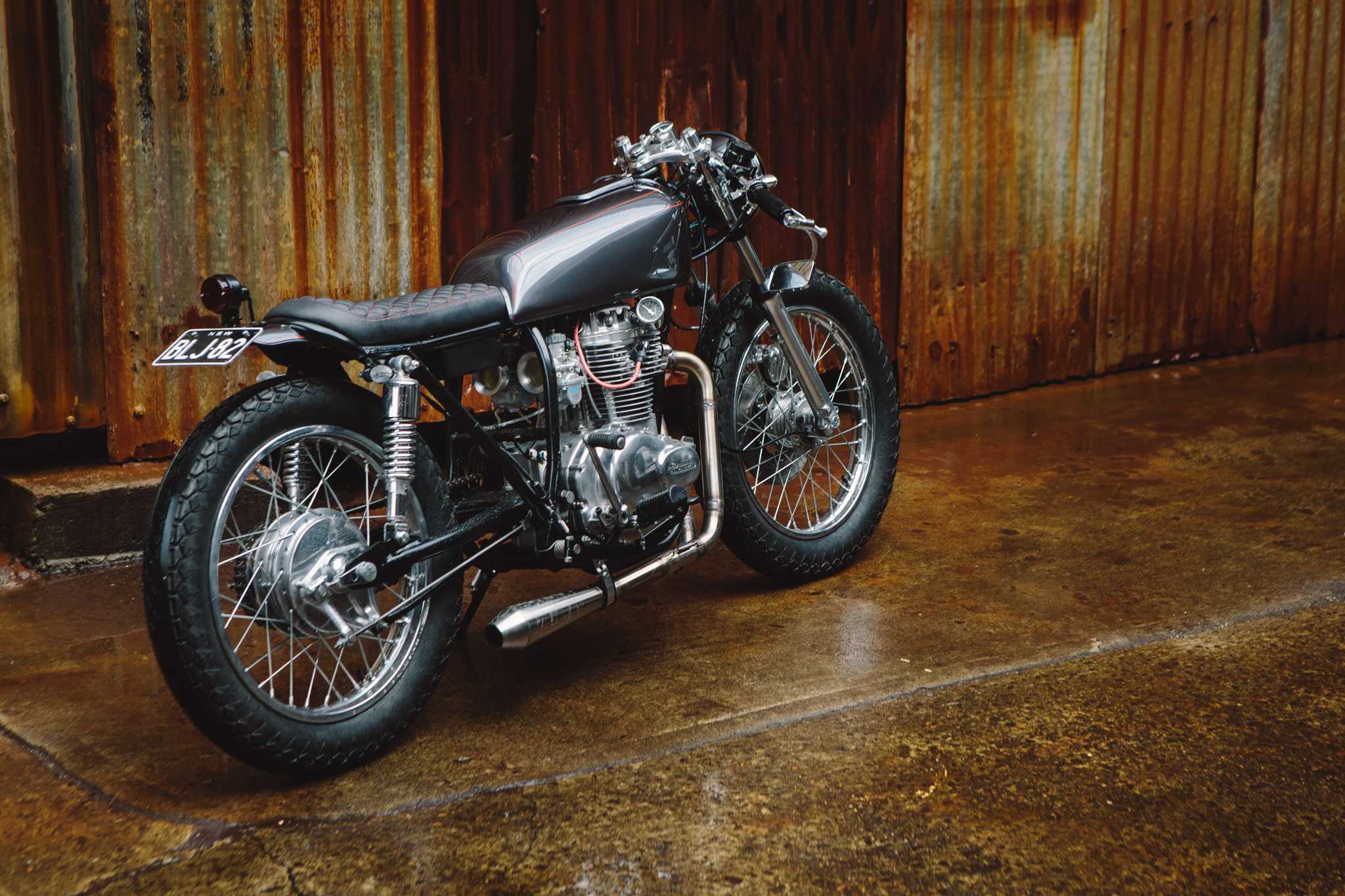 Whilst Giles made an effort to do as much of the work on this bike himself, there were certain steps that would prove to be just a wee bit too much (for now). “While I was waiting for all the aluminum casings, lower forks, wheel hubs, etc to get vapour blasted, I got to work on the frame – chopping, grinding, the works. I knew I needed some welding done, which I wanted to learn but quickly realised this was maybe a bit too much to take on. The project was dragging, and I didn’t want to be 50 by the time I completed it. I contacted Ren at Rene9ade who told me to get in touch with Kyle who was running the Rene9ade shop in Brookvale. Kyle is an absolute legend. He was able to take the ideas from my head and get them working on the bike. He welded the hoop, battery tray, made the seat, rear guard, and did the stainless pipes.” 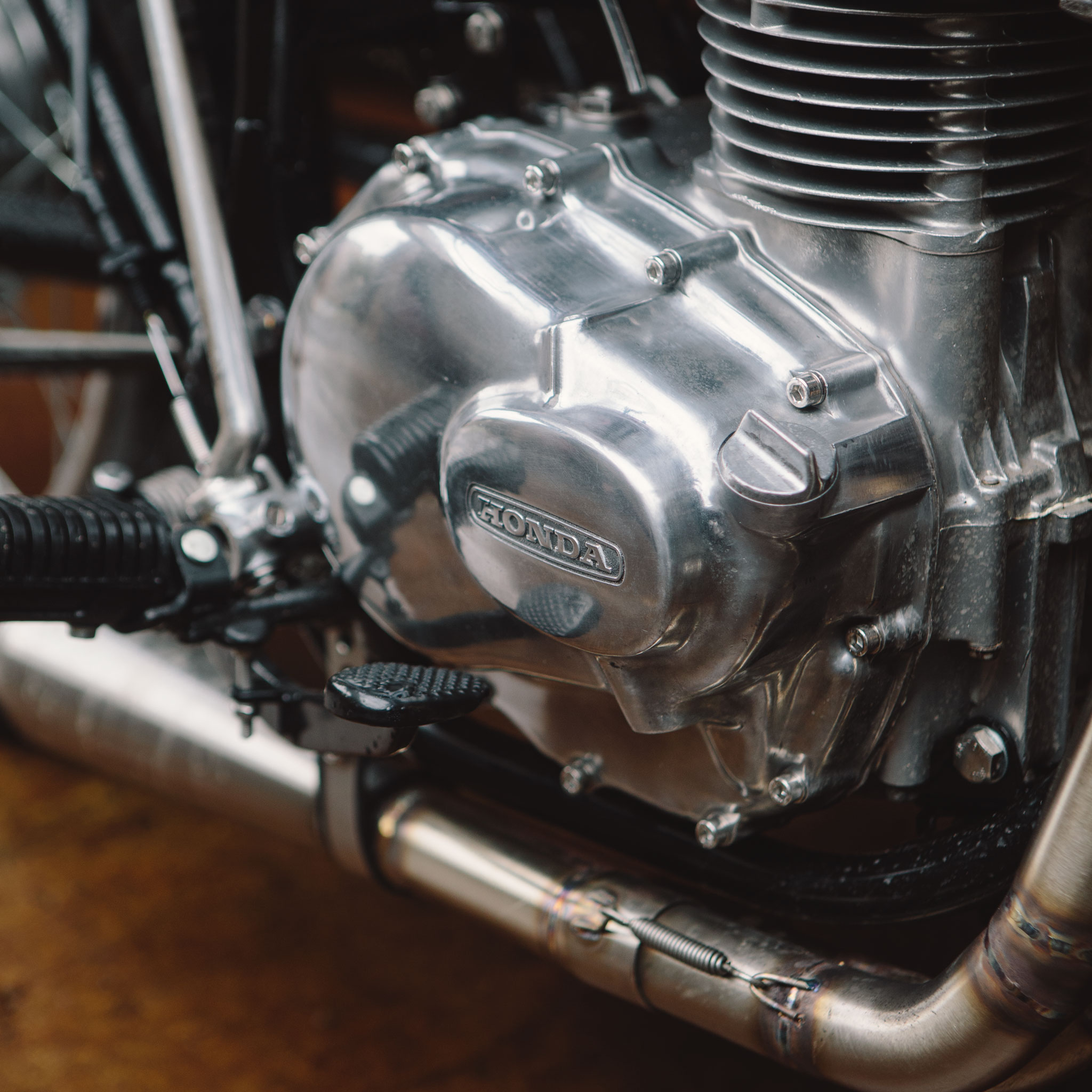 “Growing up I loved cars, but as I got older I realised that having a nice, or high performance car, was actually a waste of time. You can just never use it to anywhere close to its full potential. So cars just became a mechanism to get from A to B. But with a motorcycle, you can get a huge rush and enjoyment from riding them, even at legal speeds. So the enjoyment I used to get from thrashing little hot hatchbacks round the English countryside, I now get from riding a motorcycle. My grandfather was an engineer, and we still have a family business that manufactures gears and other precision engineering work. So I guess my thirst for wanting to do this sort of a project was in my blood, in a way. I’ve always been fascinated in understanding how things work. I now know this bike intimately! Every single nut, bolt, gear, has been looked at, and either replaced or reconditioned. It was great fun creating this bike, I loved every bit of it.”

“Oh, I also want to do a shout out to my mate Vincent, who helped me immensely. Can I squeeze that in somewhere?”

There you go Giles, consider it squeezed. Onya Vincent! 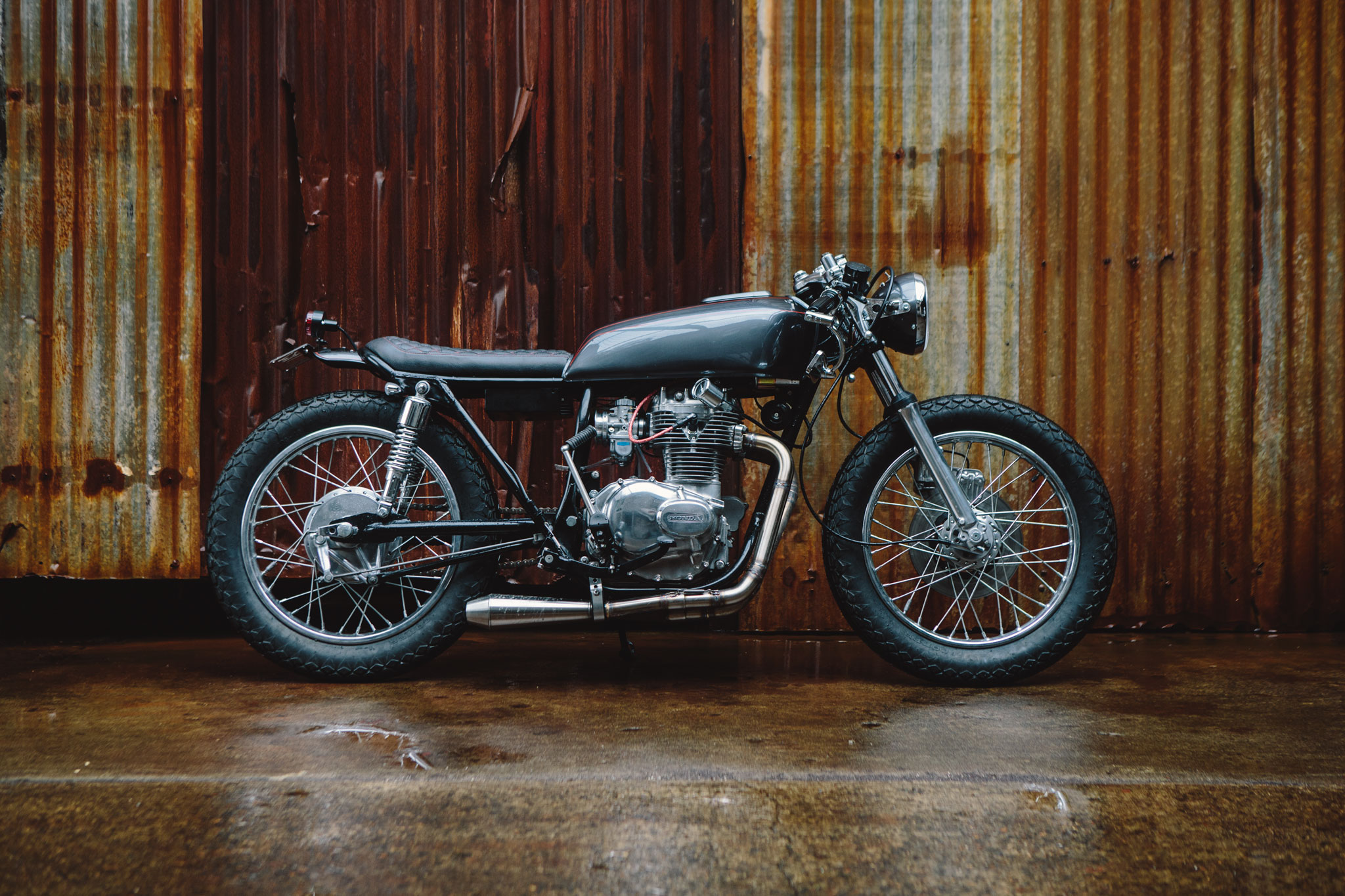