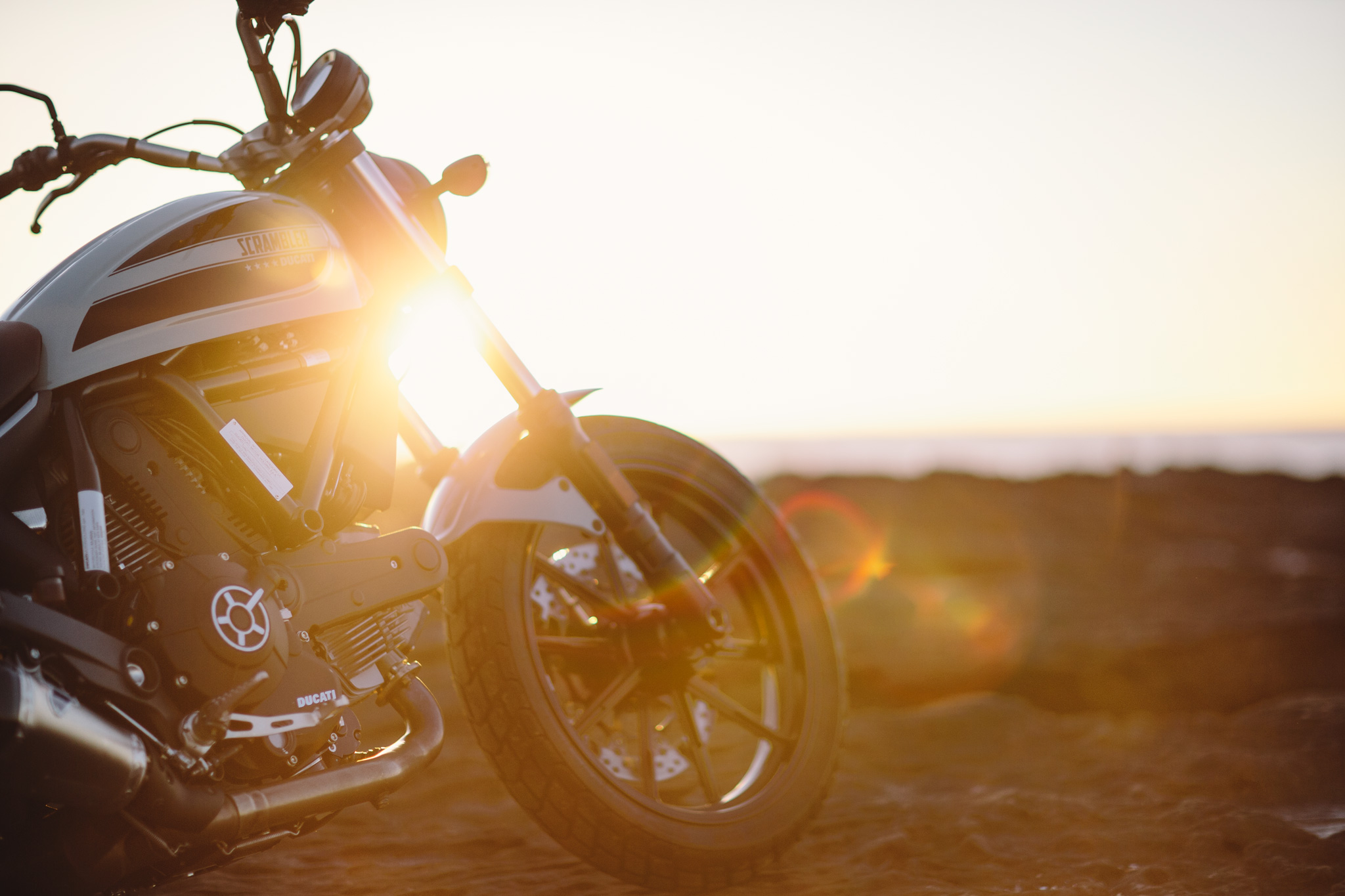 It’s no secret, the custom and classic side to motorcycles has been expanding and thriving over the past years. There’s a myriad of custom builders chopping and creating new looks for bikes, and the crowd that is buying and riding these bikes are forever hungry for more. Key motorcycle brands have been watching and listening to these growing riding desires, and following suit with new ranges of bikes that are the result of this growing avenue of style mixed with machine.

2015 saw Ducati release a new bike into the wild with the 803cc L-Twin Scrambler. While it was certainly something different for the often sportsbike orientated brand, it came as no surprise with the growing styles and trends in riding taking over the globe. The market for a classic styled, but modern motorcycle that could be customised was thriving, and Ducati knew what people wanted. A throwback to the previous Scrambler range made by Ducati for the American market from 1962-1974, the new range featured classic styling with modern power and performance. 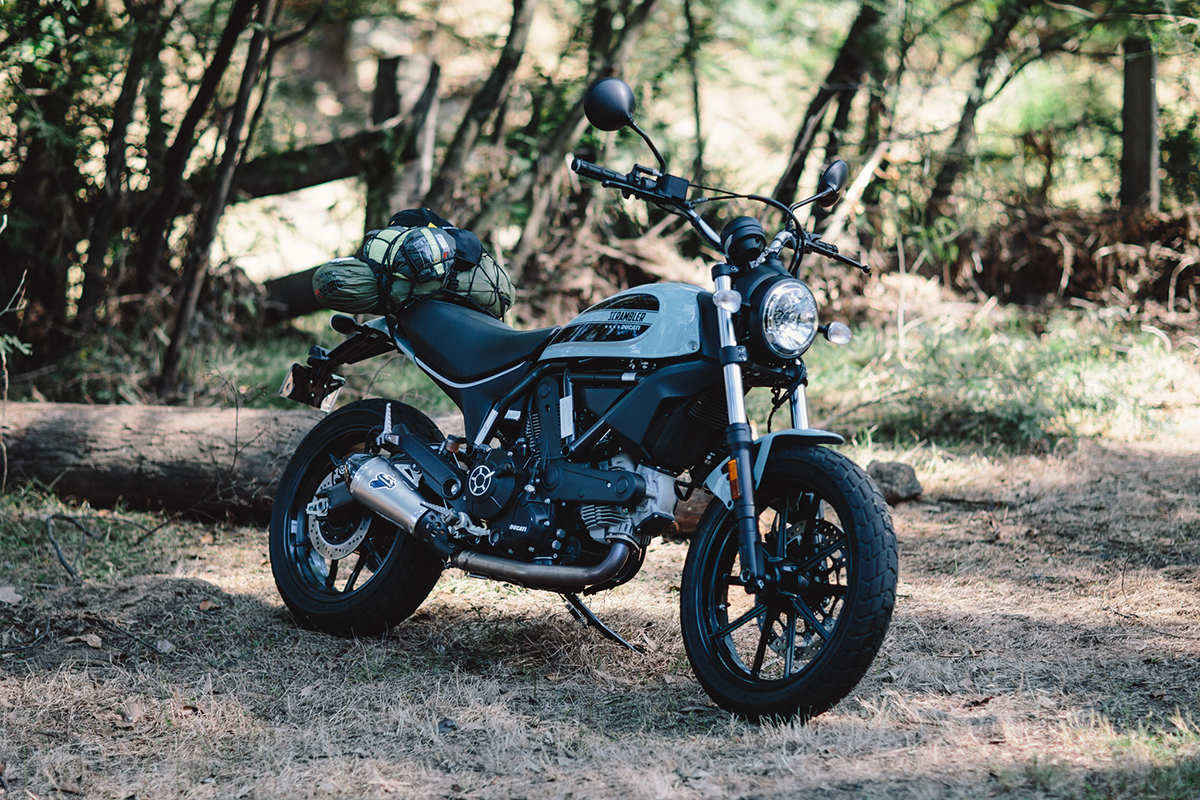 The release of the Ducati Scrambler has been hugely popular, with the Scrambler 803cc in all its models taking the title of the tenth best-selling bike above 500cc in 2015. 16,000 bikes being sold globally is an impressive number for a bike newly released onto the market, so the people had spoken – they liked this bike. Following this success, a new Scrambler was set loose on the world – the Sixty2. This would be a smaller 399cc machine that still held the same modern classic look of its 803cc bigger brother, but this time made available for another audience of rider.

With Learner and Provisional riders in Australia sometimes looking at the prospect of a 4-year stint on restricted bikes until they can get their full licence, more brands are listening and catering to the LAM’s crowd – which is bloody great. The Ducati Scrambler Sixty2 is a big contender in the list of bikes that are available straight off the bat to new riders, so I, Pete, your friendly Throttle Roll photographer decided to get the scoop and take one of these bikes out to be put to the test. Whether it’s a daily commute through Sydney’s magnificent traffic congestion (can we blame this on Baird, just for fun?) or on an overnighter trip up the coast. 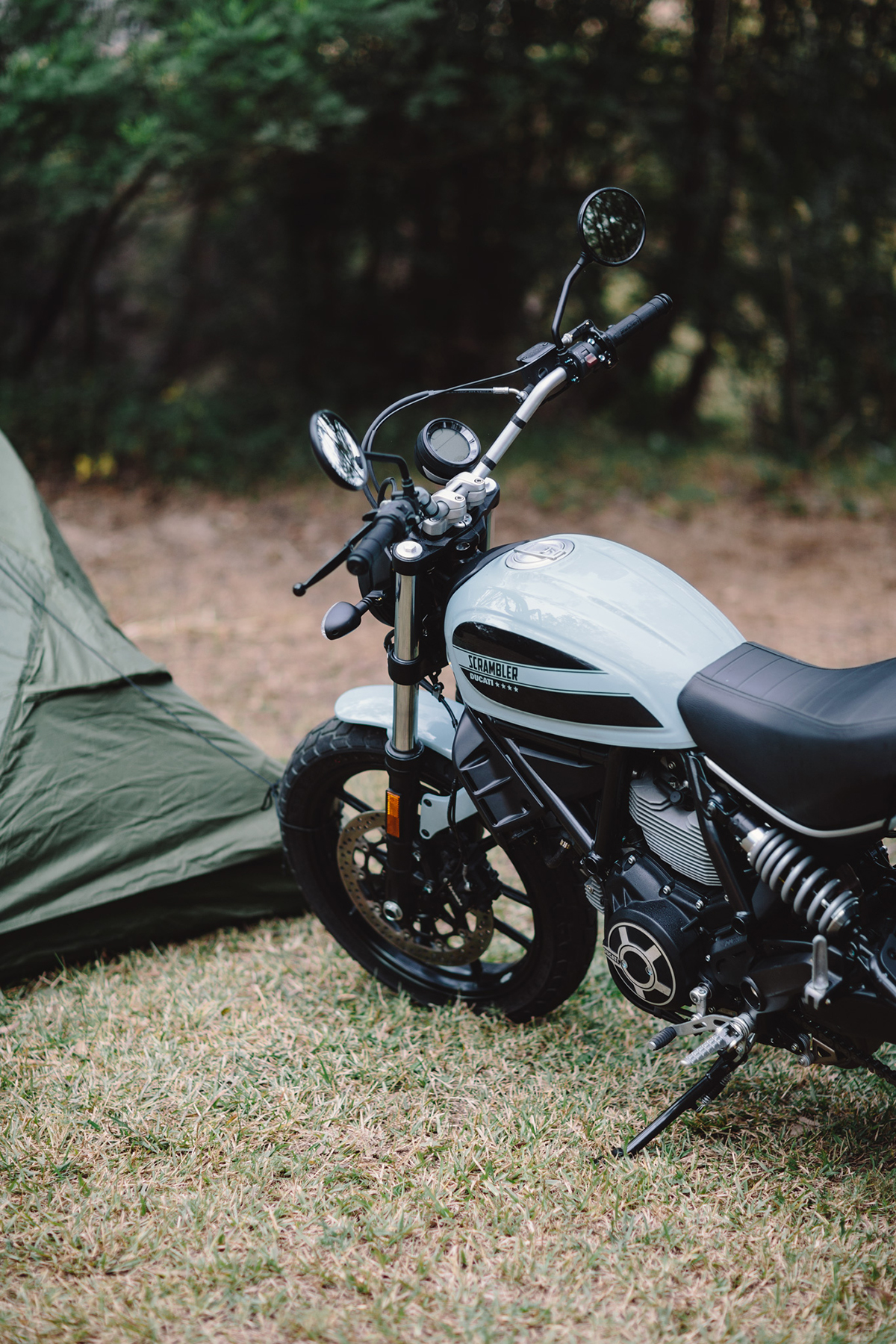 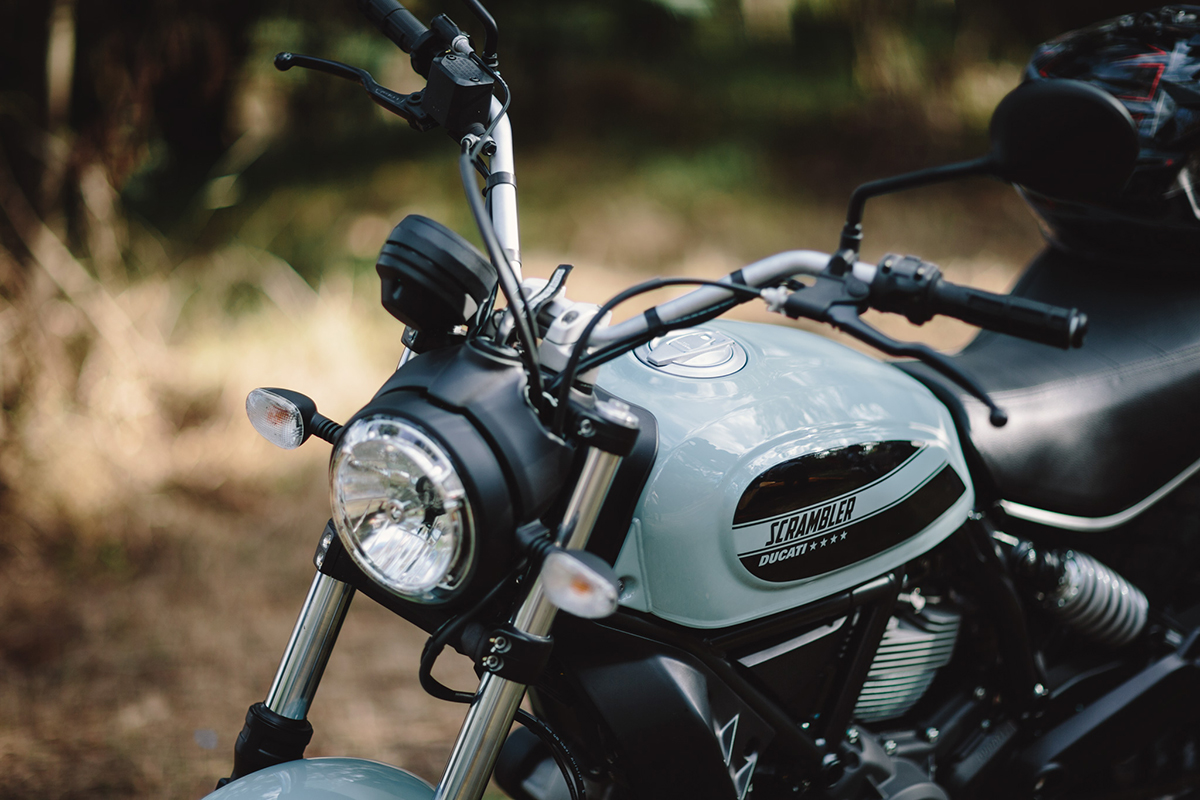 Having a Harley Sportster for my all-rounder bike, hopping on this 183kg (wet) bike came as a big change in weight, but a welcome one. It’s got a super relaxed riding position, with wide bars that give you plenty of leverage to play with. My first order of business would be to put the bike under what I would consider my most important test for a motorcycle – an overnighter trip filled with riding, camping, and beers. Gathering early in the morning, I’d be riding alongside 3 mates, on much bigger capacity bikes. This would be an interesting comparison.

We would head out west to Colo, and then up the Putty, down to Broke before finally arriving at Wollombi Tavern to camp and enjoy a beer or two. Even without the rack accessory that is available for this bike, my camping gear strapped on to the seat happy as Larry. Now that’s a tick. The riding position for these Scramblers is interesting, in that I’ve had others comment on how they prefer to ride further back up on the seat, whilst I found myself sitting with nuts up on the tank much like a dirtbike once you had a bit of speed and corners were on the menu. It’s a zippy little bike, not as aggressive as it’s 803cc brother, but it’s got some juice for a 399cc regardless. The bike would sit at 140kph quite happily, albeit taking a bit of road to get there. The boring/quiet/Highway Patrol friendly exhaust had been ditched on this particular model I’d received for a much nicer set of Termignoni exaust that was much akin to a sleeping cat that had suddenly been stepped on – a nice quiet purr followed by a high pitched screech. 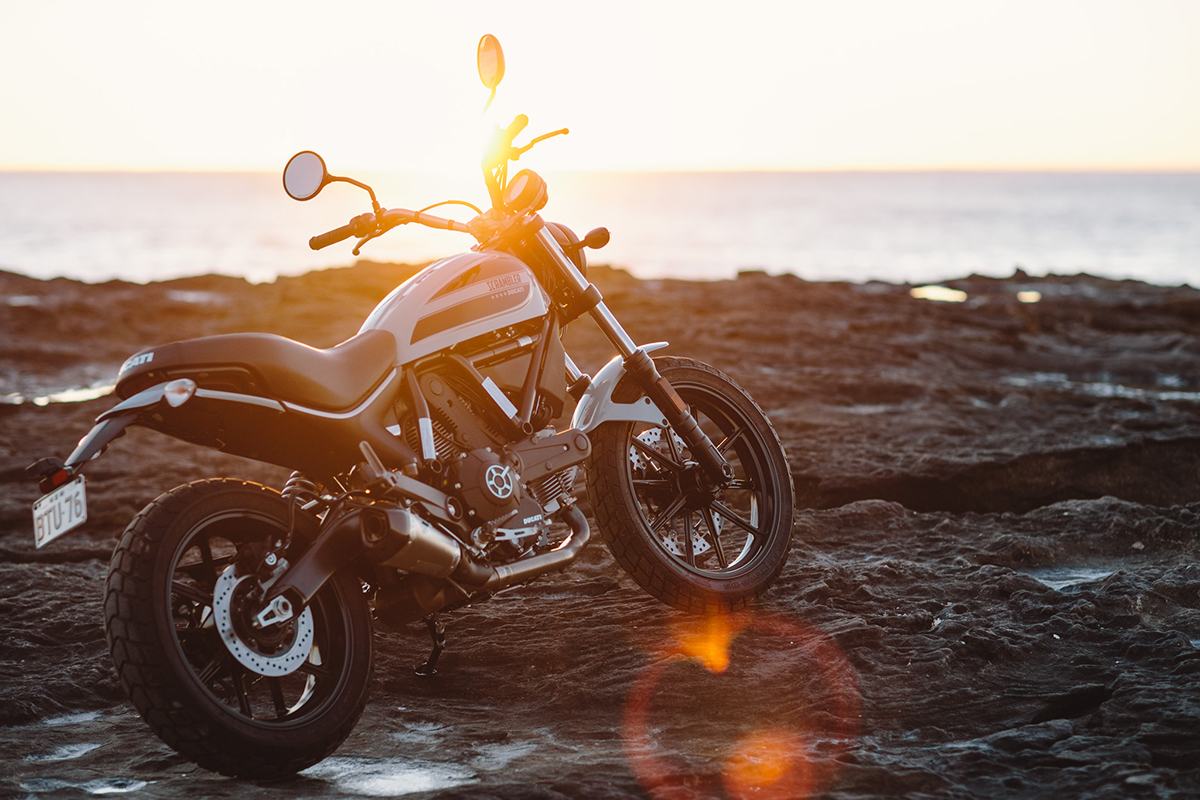 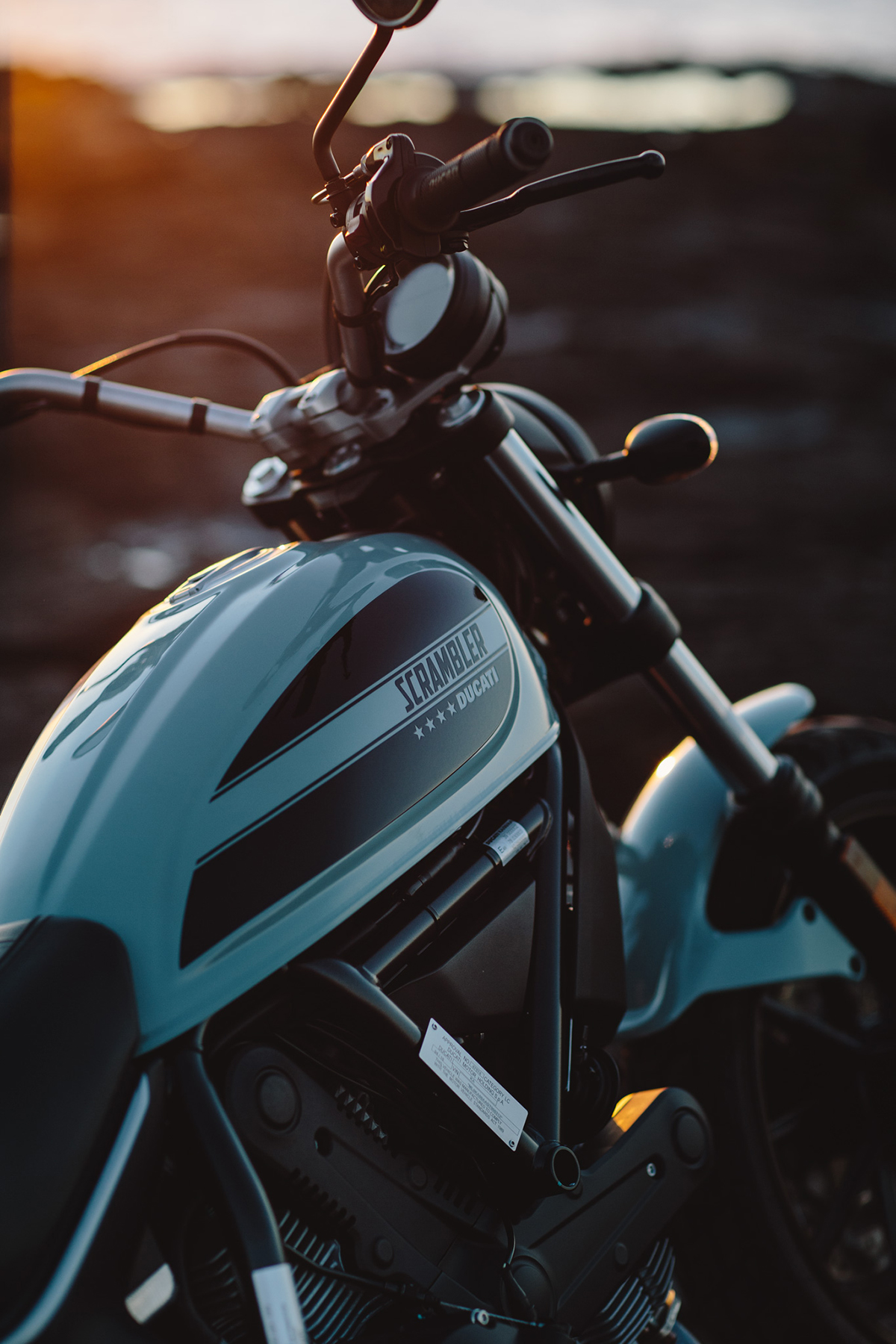 The bike survived and was quite enjoyable for the Putty ride and camping trip, with thoughts of “it’s bloody fun for a 400c” swirling about in my head. Fun is certainly an adjective for this bike, with new riders finding it something that’s an easy to manage bike that also has a bit of zip, while more experienced rider’s enjoying a lightweight bike that can have it’s neck wringed, a guilty pleasure for many.

As a daily commuter, enduring the joy that is Sydney’s peak hour traffic, it’s a fine enough bike. However, with lane filtering being legal (because we totally never did it before…) it can be tricky squeezing the wide bars and mirrors through gaps in traffic, having to be ever vigilant of others mirrors. As far as taking a pillion is concerned, it quite happily took my Missus on the back for trips up and down the coast, which is another important box to tick off for me – and those looking to impress on tinder dates.

This is a bike that is absolutely aimed at the LAM’s market, with it’s Italian heritage giving it plenty of style as far as aesthetics are concerned – although the weird fin-shaped rubber key handle can be a big fiddly once it’s in the ignition and on a keyring. It’s a well-made bike, that although carries a reflective price tag, makes for a fantastic start off for those looking down the barrel of a possible 4 years on a restricted licence. All Scramblers come with ABS standard, which is a huge plus as well. With a metric shitload of accessories, you’ll be able to customise and change your bike without the need of an angle grinder or custom garage to keep your ride interesting. Scrambler Ducati has proven to be a range of bikes that has been popular for it’s look and performance, and the Sixty2 is no exception. 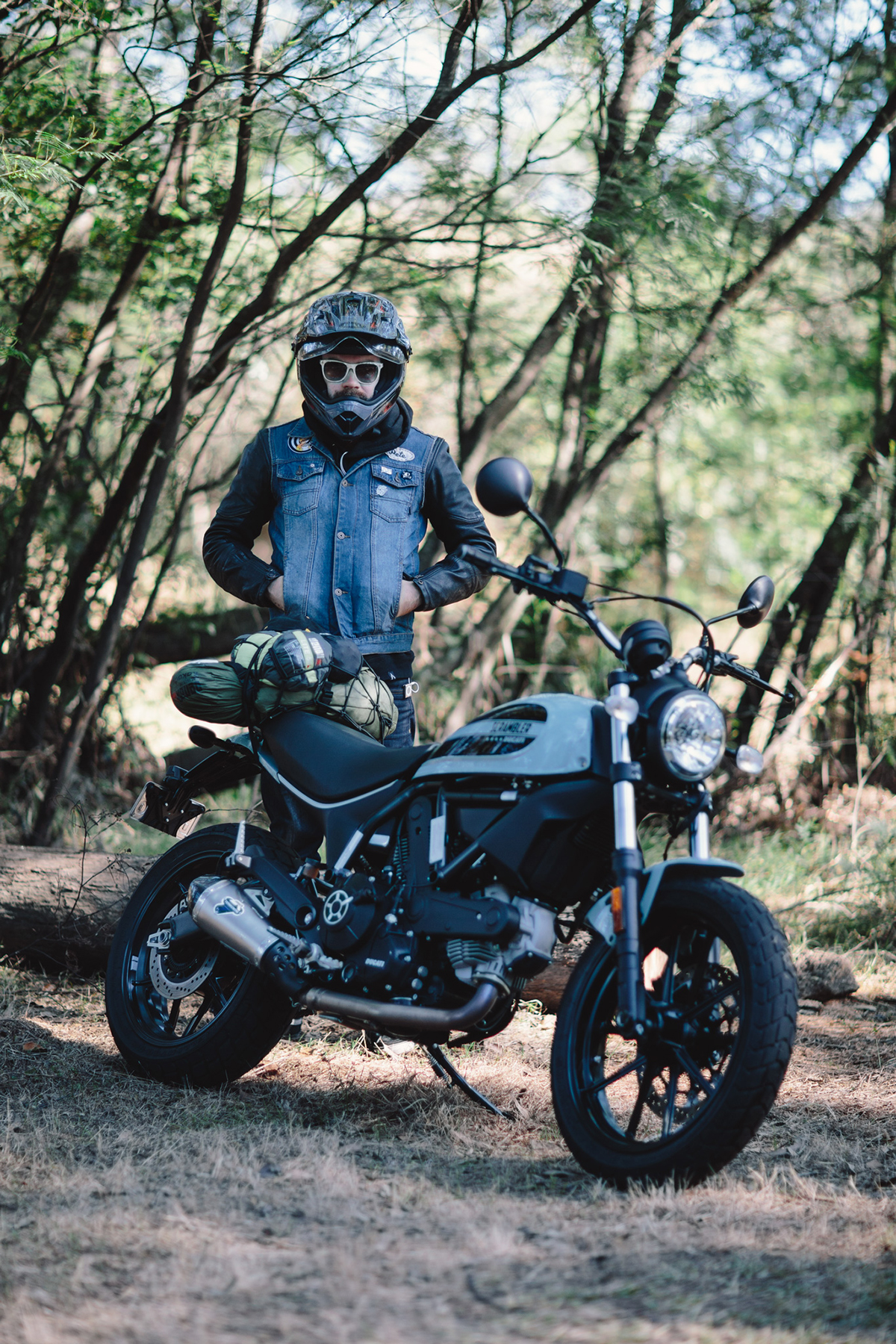 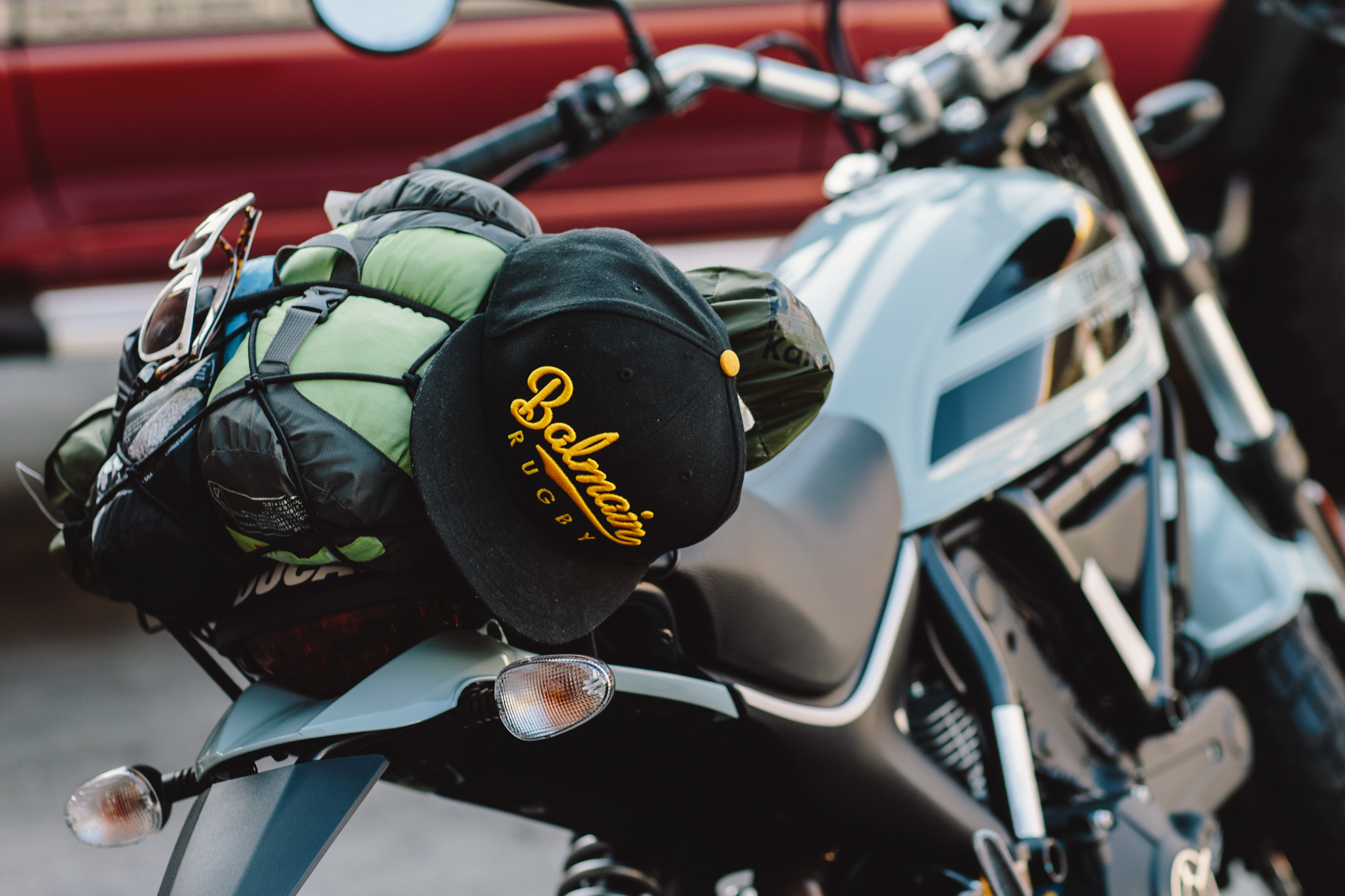 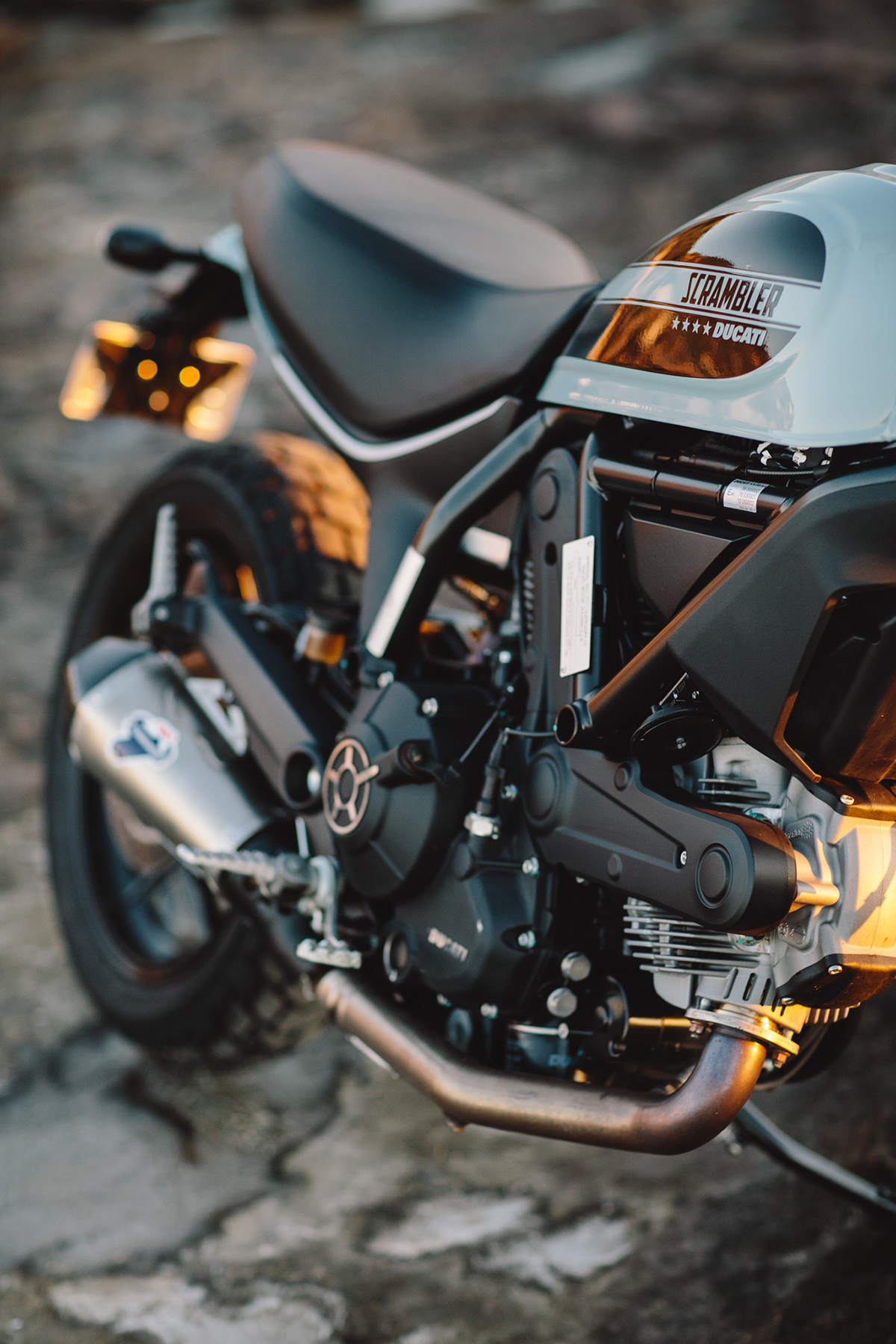 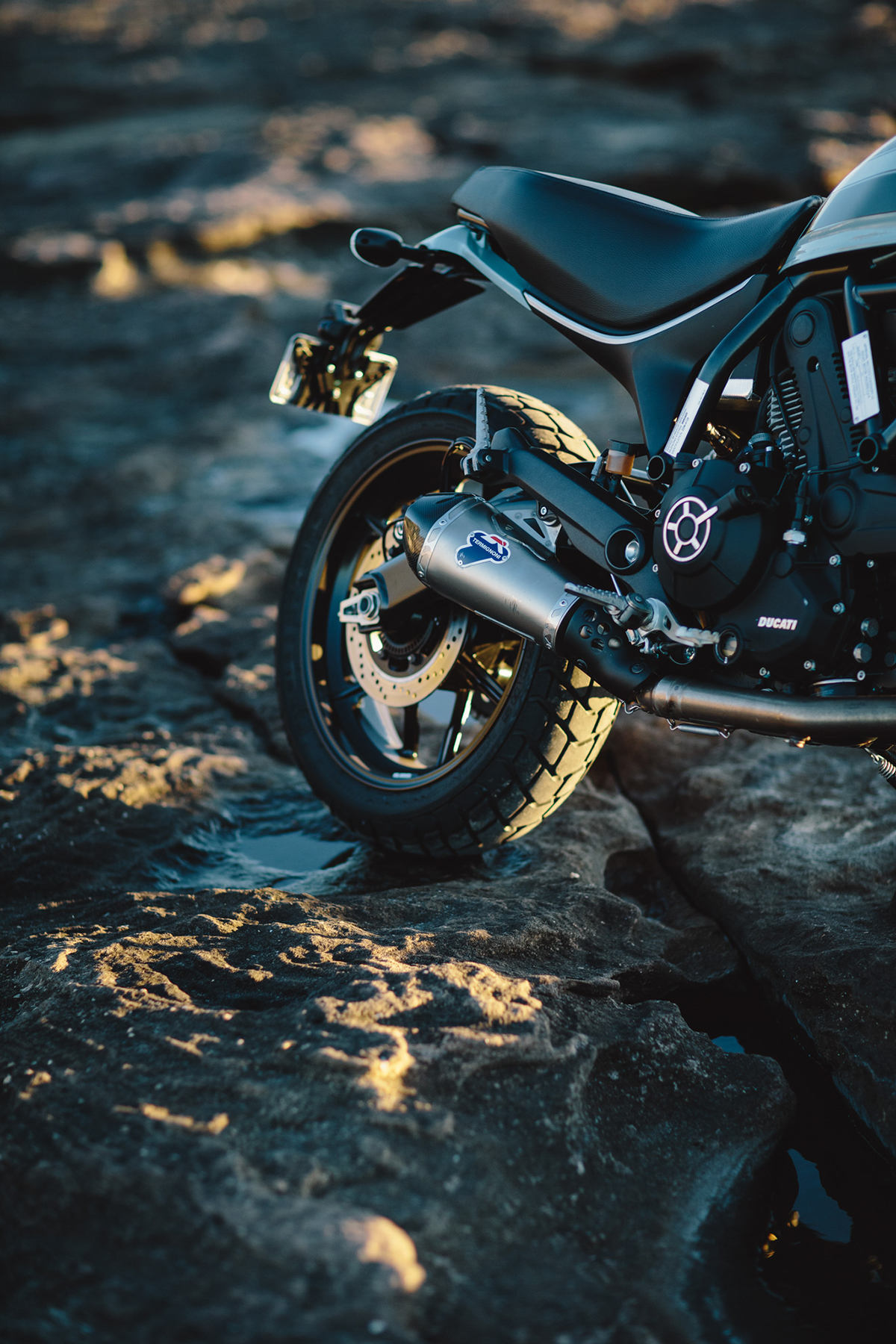 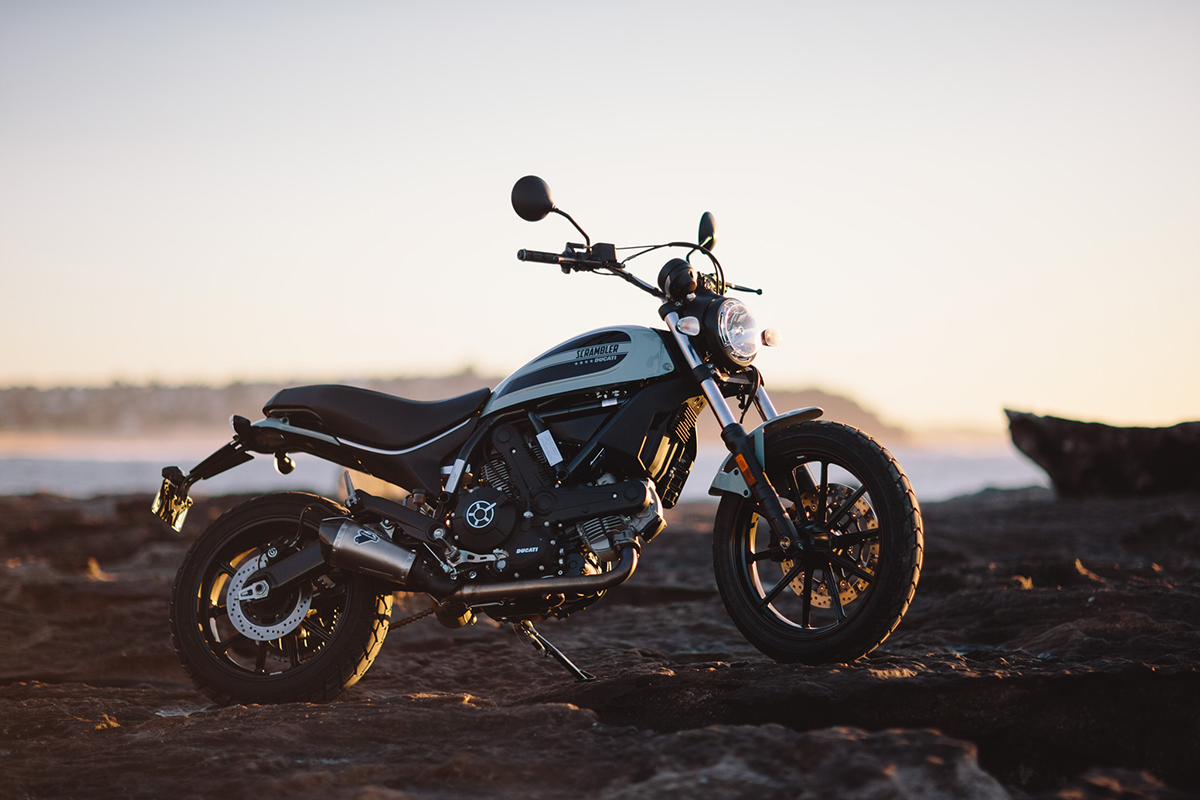 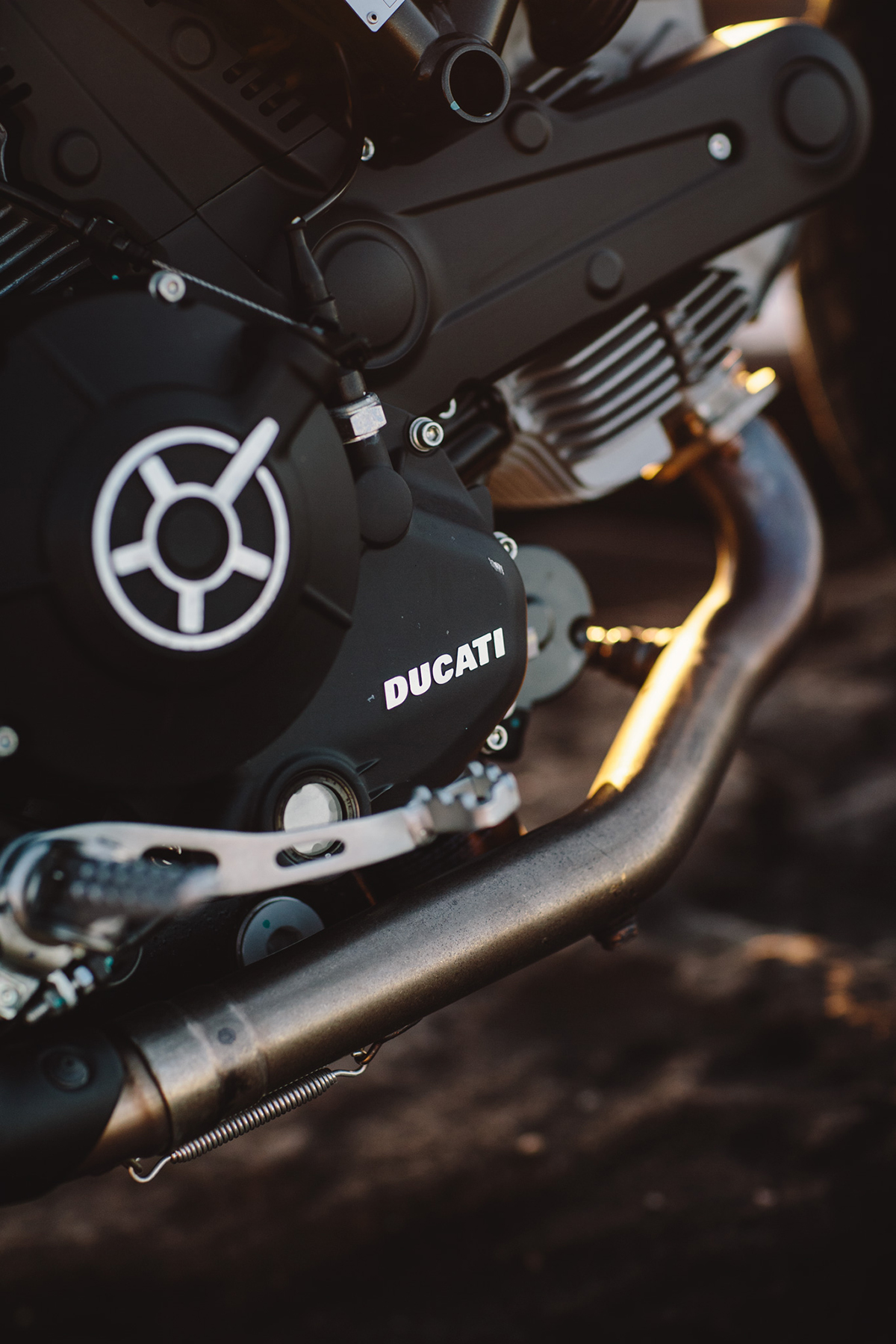 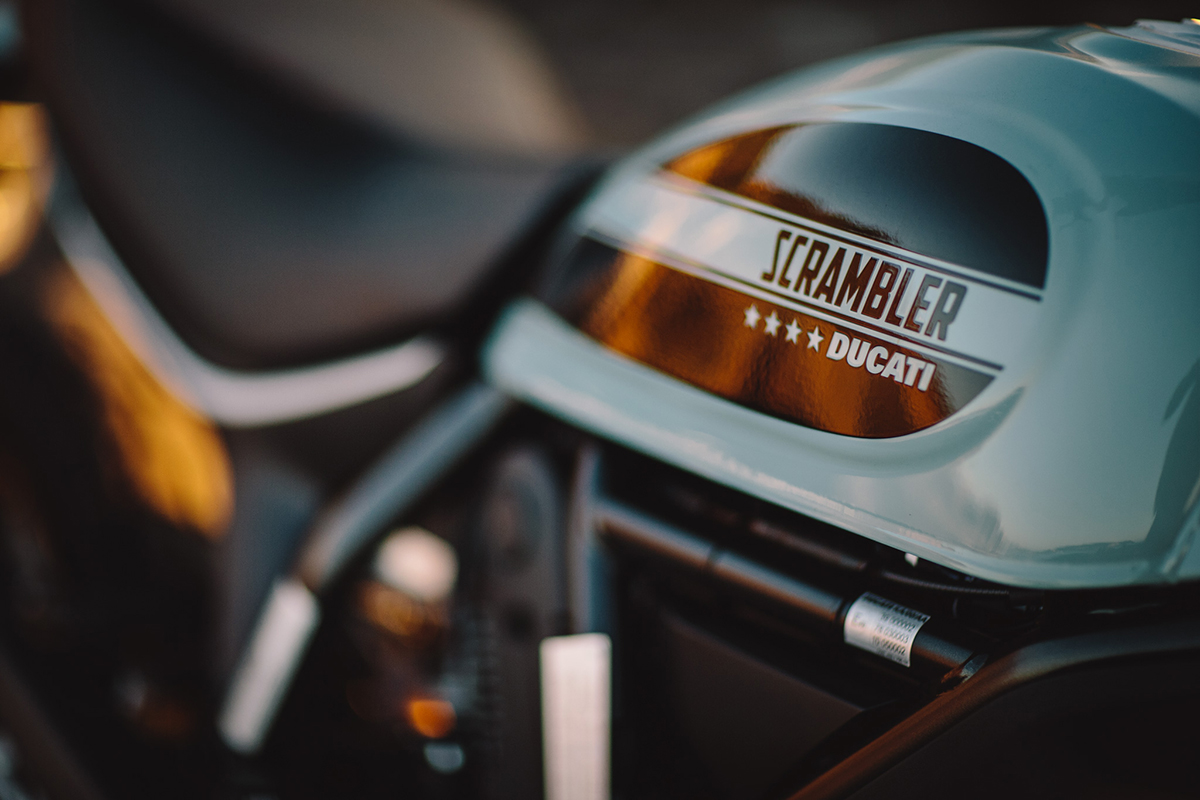 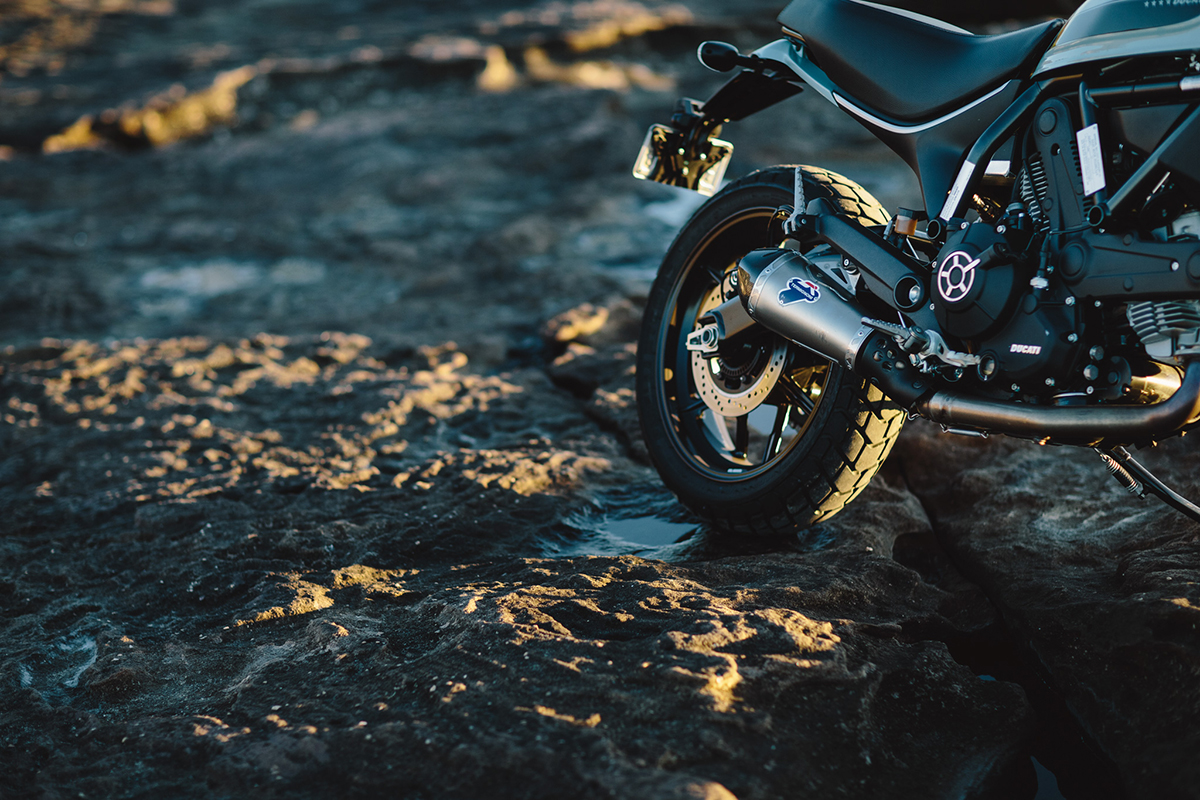