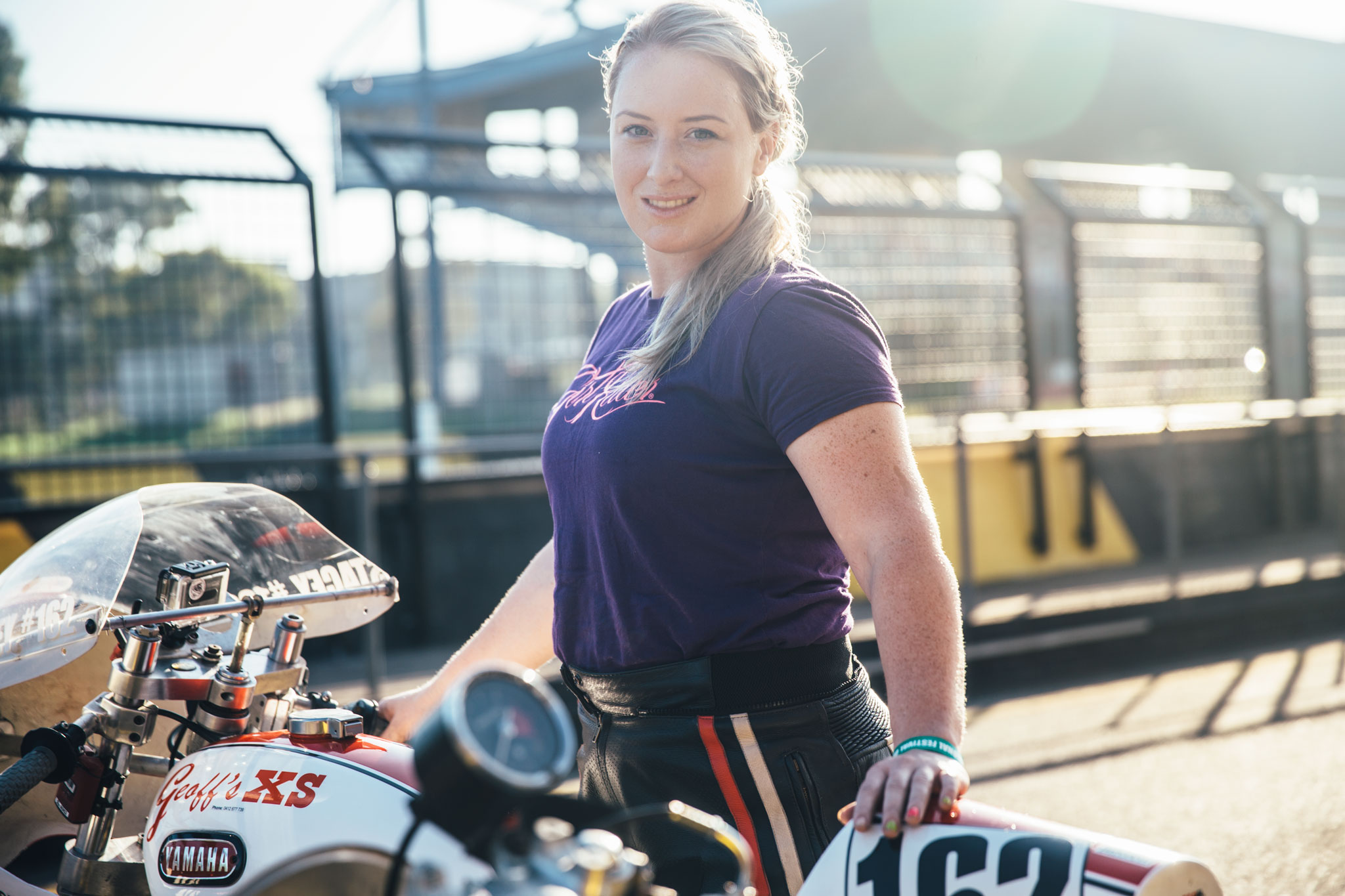 Team Heaney is a real family affair, whether it be Stace and her racer/pit boss/wrench monkey father Des, or one of the many family friends/competitors that live trackside that may as well be part of the family when they stop by to talk shop about whichever bikes that are being raced that weekend. It’s full throttle forwards for Stace and the family behind her. 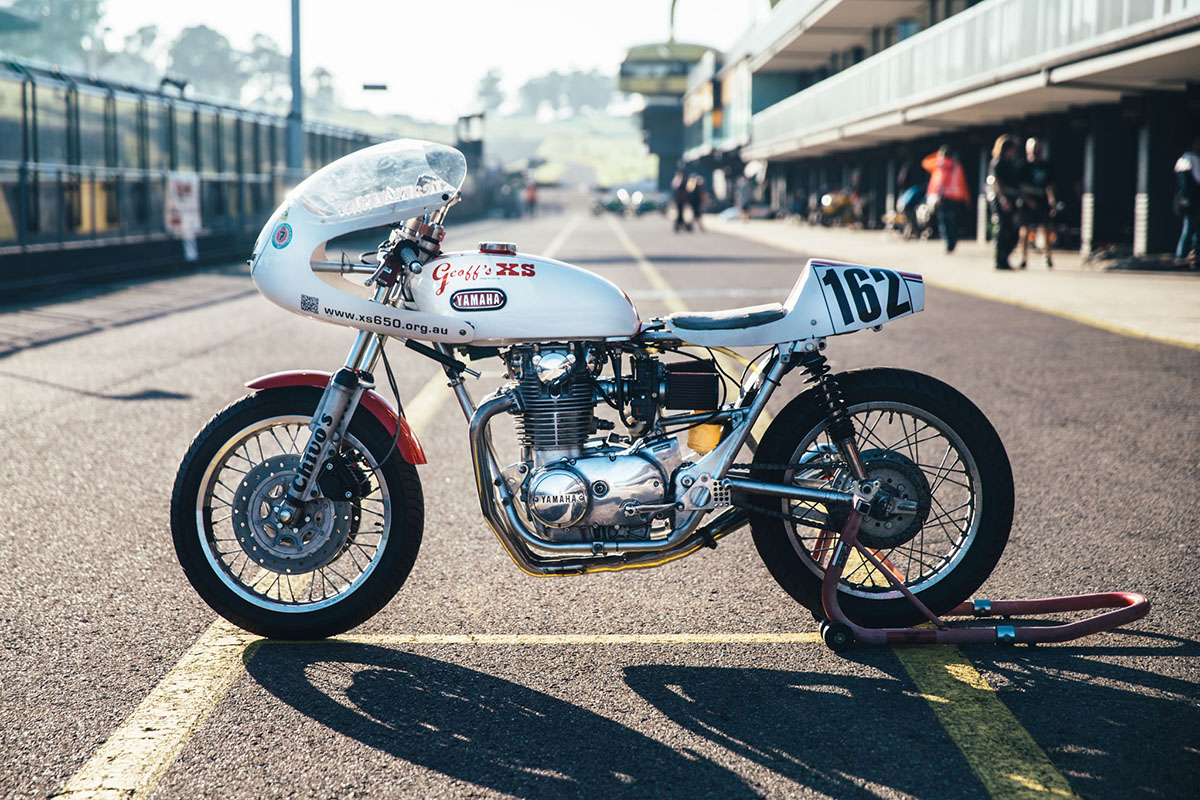 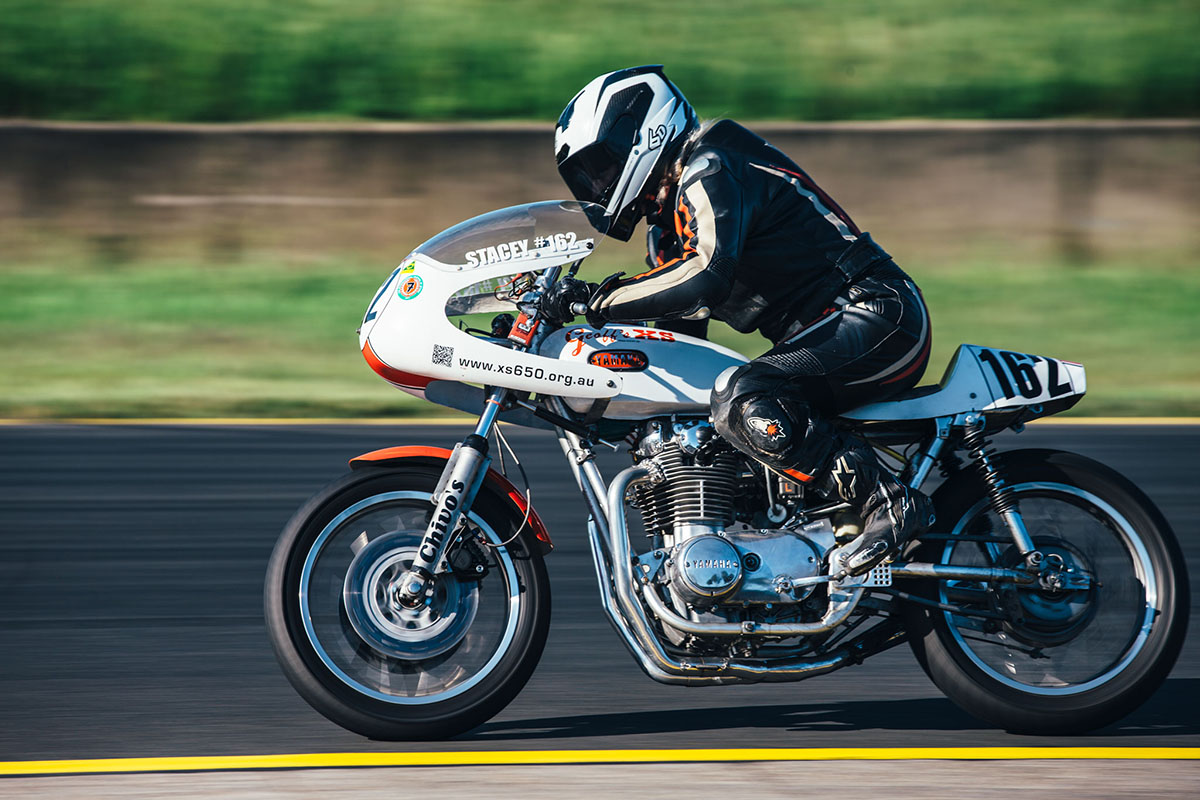 When you start riding motorcycles at the age of 5, and are surrounded by a racing family – it’s only a matter of time before you’re hitting the track. This was life for our hero of today, Stacey Heaney. Like most of us growing up, her father was a major influence in making sure her days were filled with machines that are primed for mischief. “Dad had a shed full of BSA’s, Triumphs and AJS’s. He made sure I had a proper background in bikes. This progressed to me racing classic motocross when I was 6, on an early Honda XR75. My Dad actually lied about my age as the only club around would only let you race when you were 12. The club president used to joke that I was the shortest 12 year old he’d ever met every time I signed on. I raced classic and modern motocross for about 19 years until I decided I wanted to give historic road racing a go. I was drawn to historic hill climbs at first, winning my first race on a Suzuki t250cc. People at that race said I really should give track a go as I was a natural on the tarmac, and so I did.” 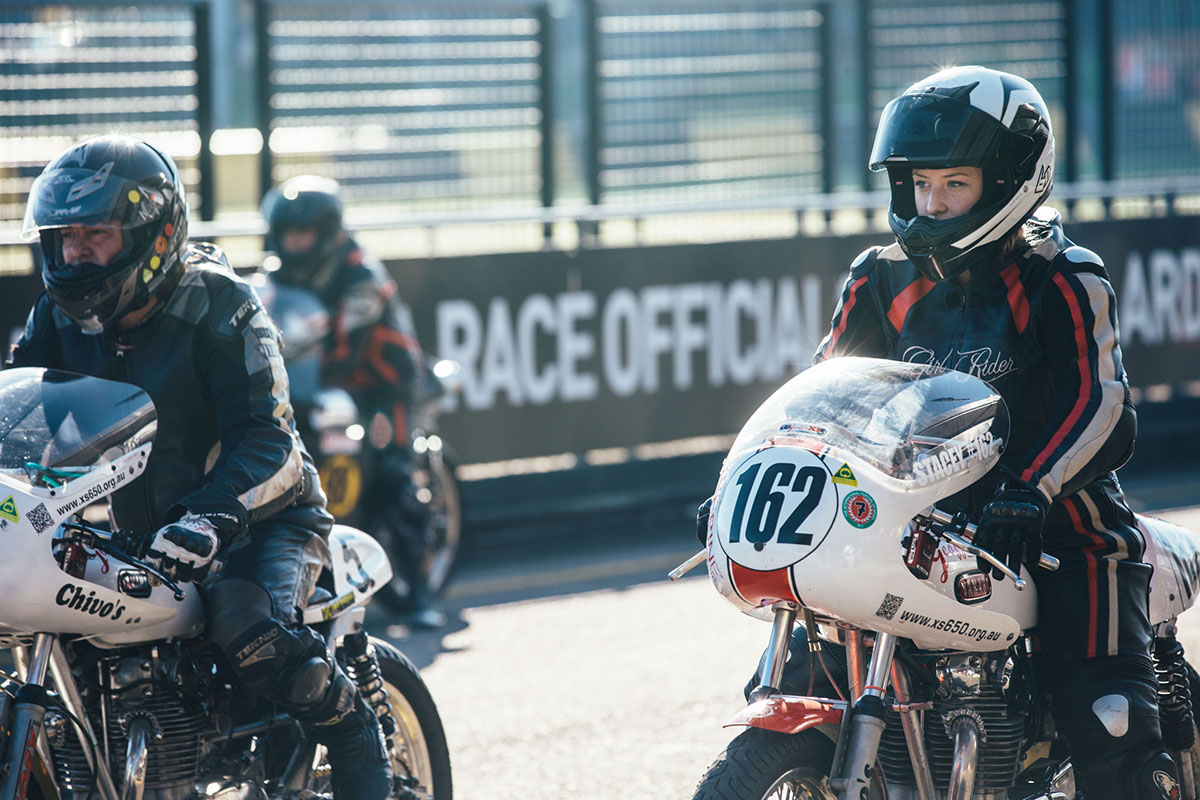 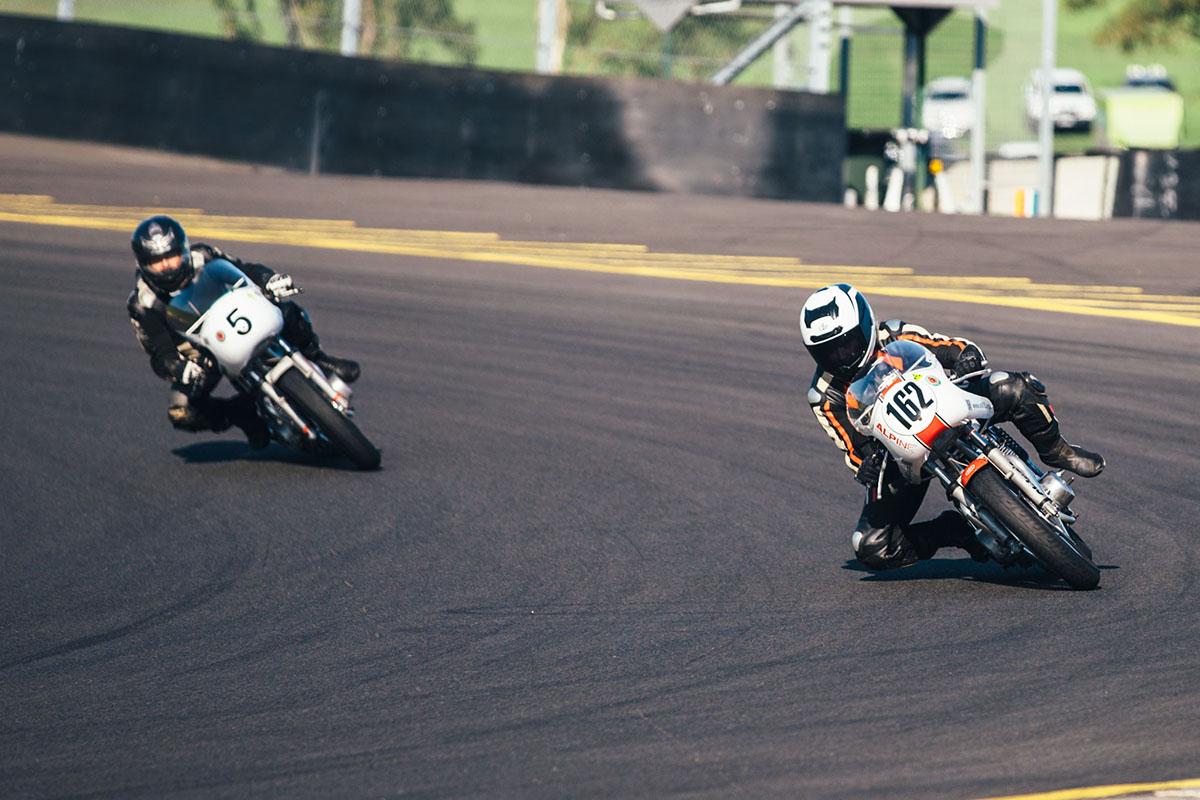 The charm and character of classic bikes would be what Stace is most passionate about. The relationship between rider and machine, albeit at times turbulent, forges a unique bond. Racing these machines only furthers this. “There’s never a race where you’re not head down, bum up, working on your motorcycle. In order to win a race, you and your motorcycle have to get to the finish line. I enjoy the challenge.” 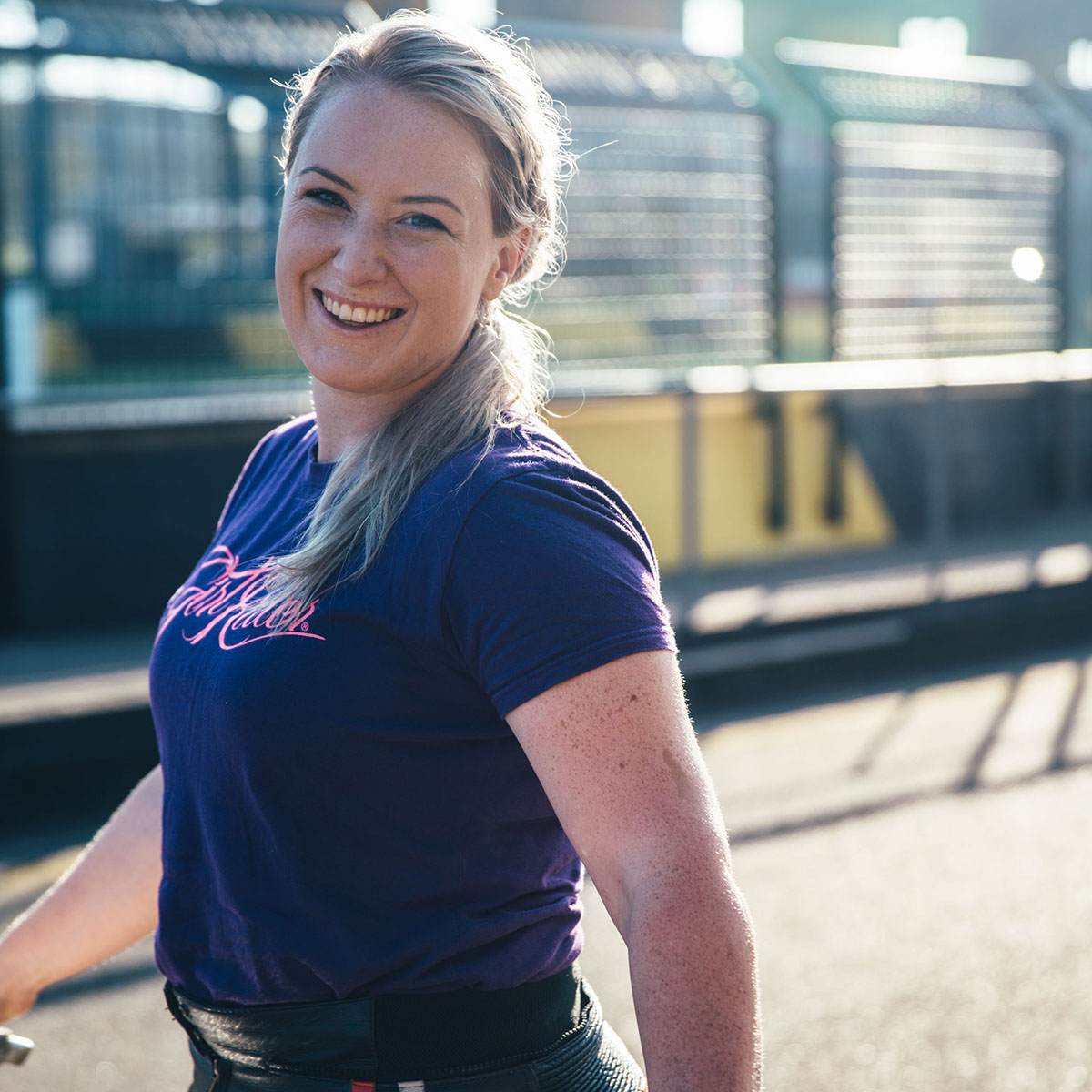 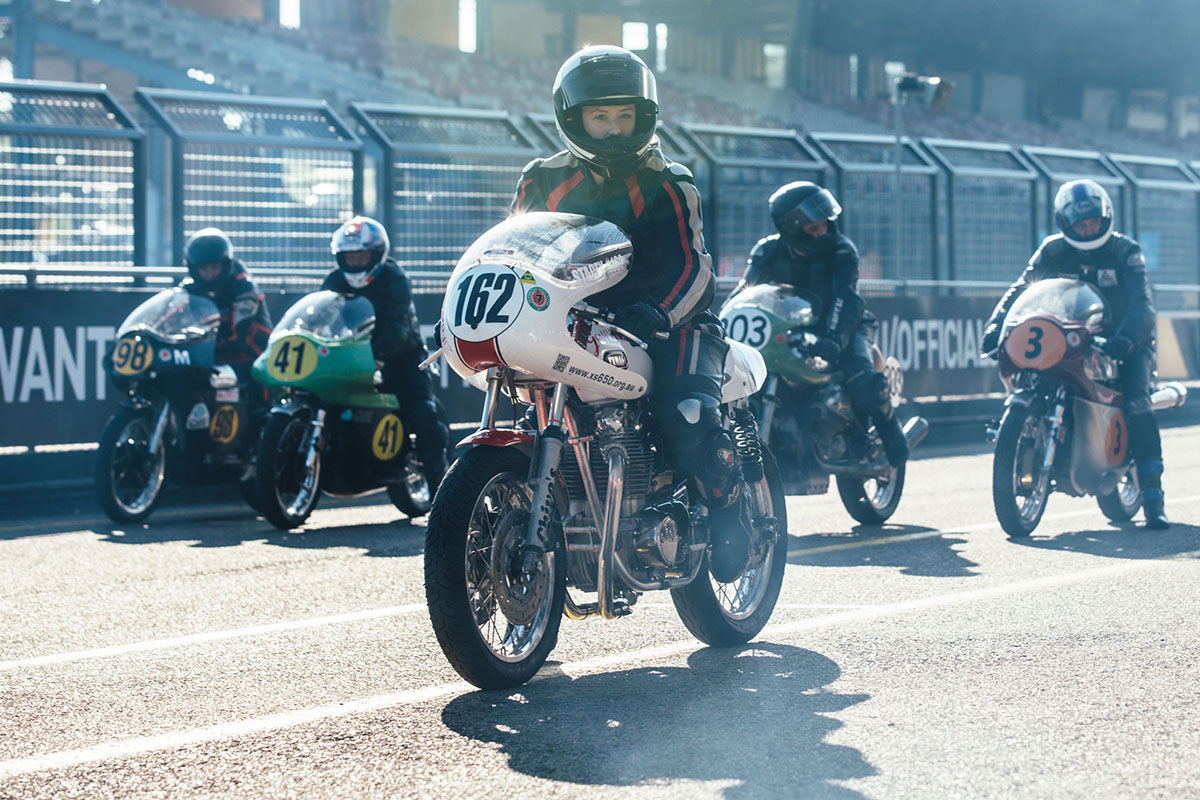 You’ll find Stace smashing the track on a couple of classic machines, namely a swift looking Yamaha XS650 which she rides on behalf of the XS Australia club. Everything that is tinkered with on this bike, worked on or fabricated is then put onto their website and newsletter for fellow XS riders and builders to learn from. Be it mistakes or strokes of genius. 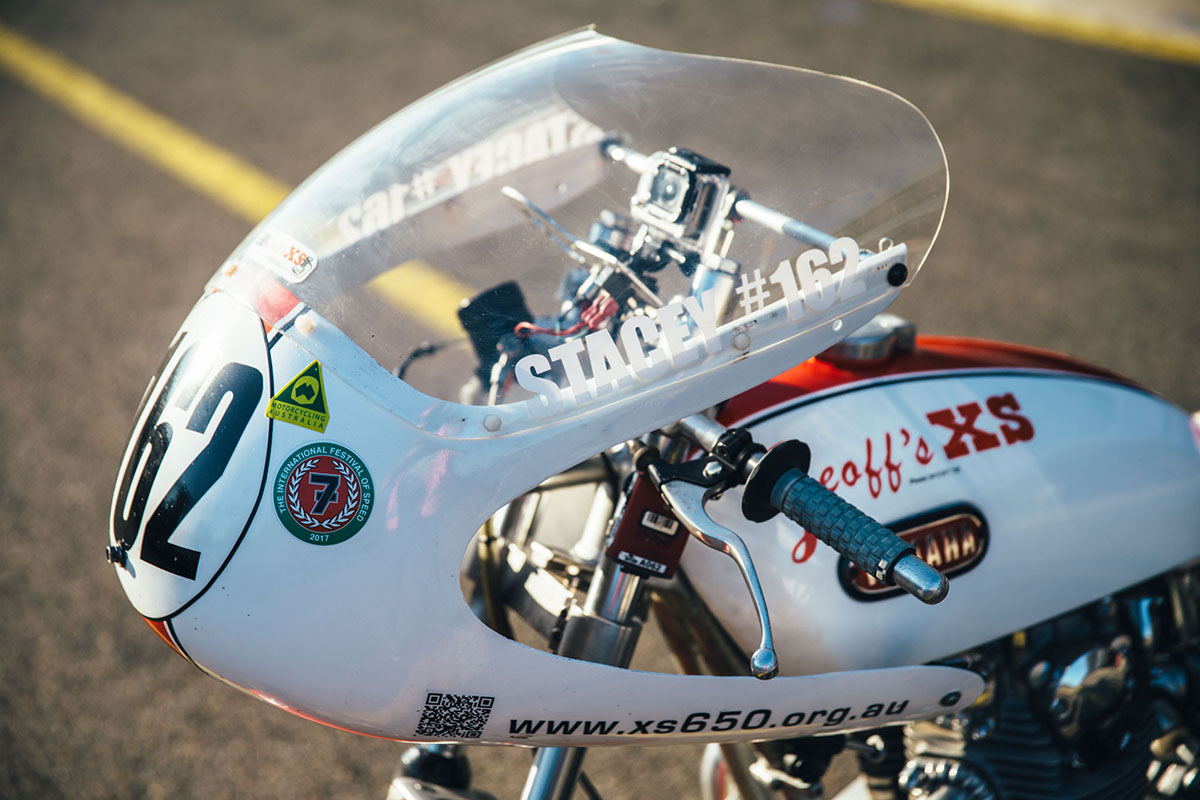 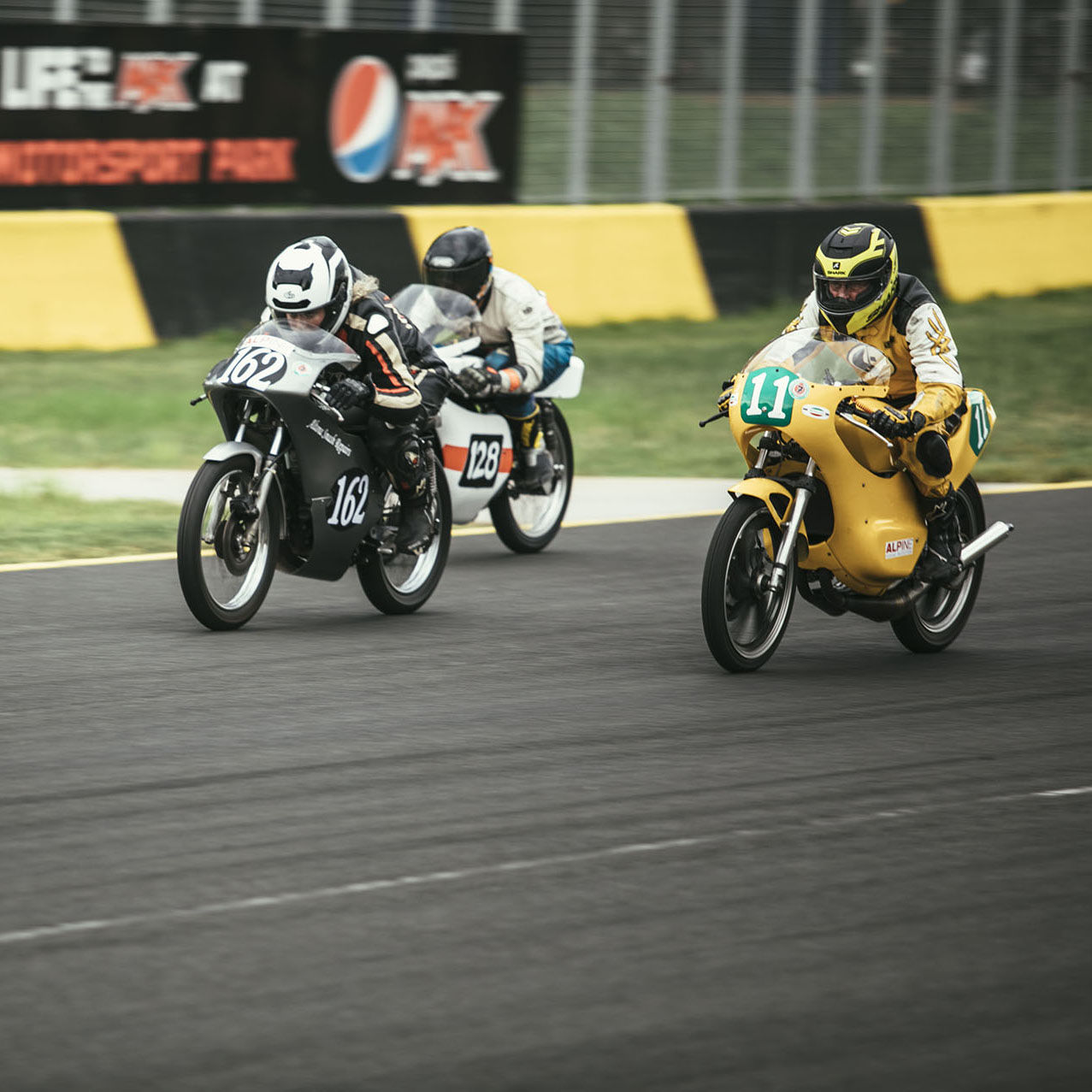 “My favourite bikes to ride would have to be the 1960’s Triumph Metisse’s, or the 1958 Royal Enfield Bullet. There is something special about how the oldies ride, the sound and feel – there is no modern bike on the market quite like them. The oldies riding style is different to how you would ride a modern bike. You have to ride them like they’re going to church, but at the same time try to be fast with smooth corner momentum. Between gears, you have to be patient, take a breath and let them fall into gear. And the brakes… haha what brakes?! They either work for the first lap, or don’t pull up well at all. You won’t get that kind of challenge on an R1.” 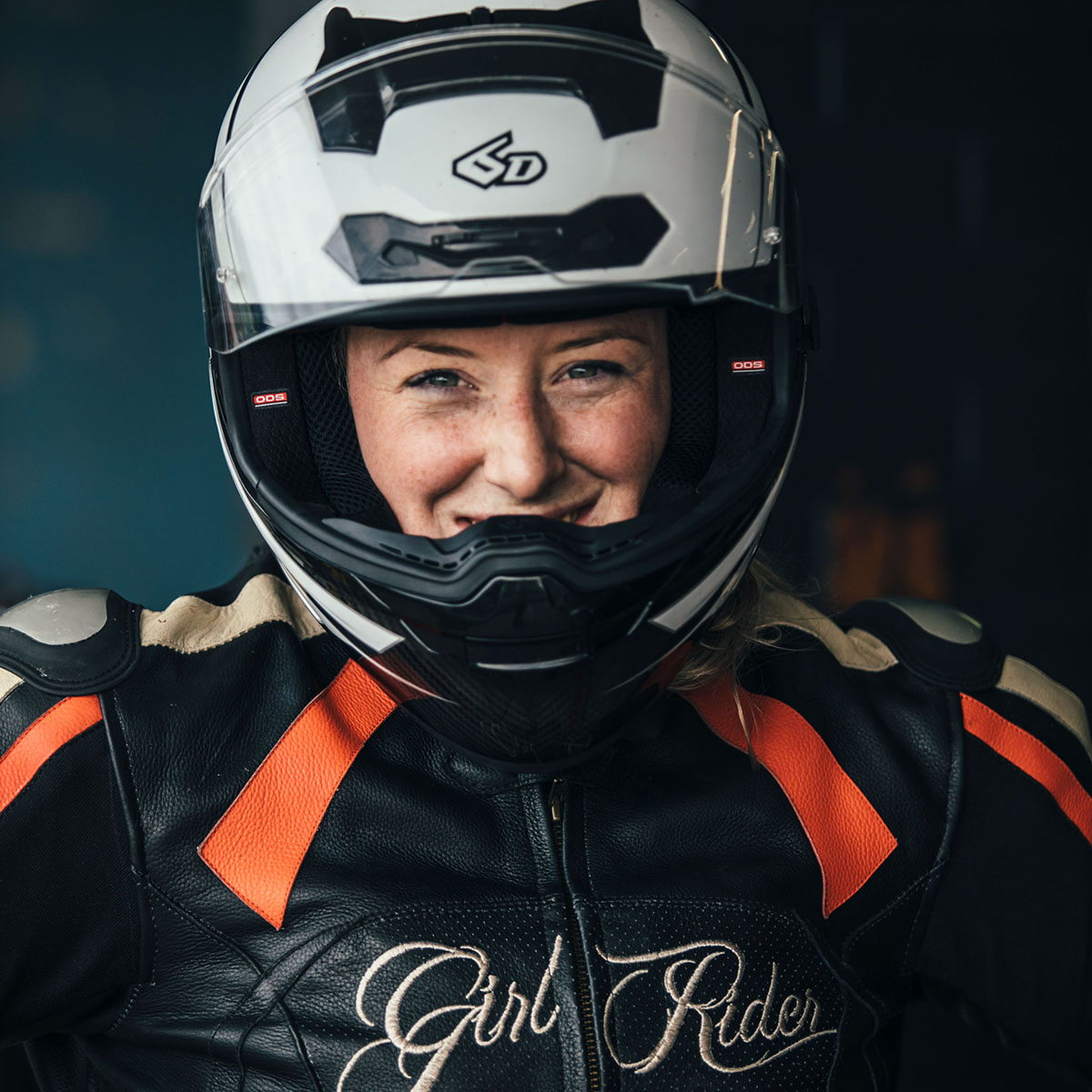 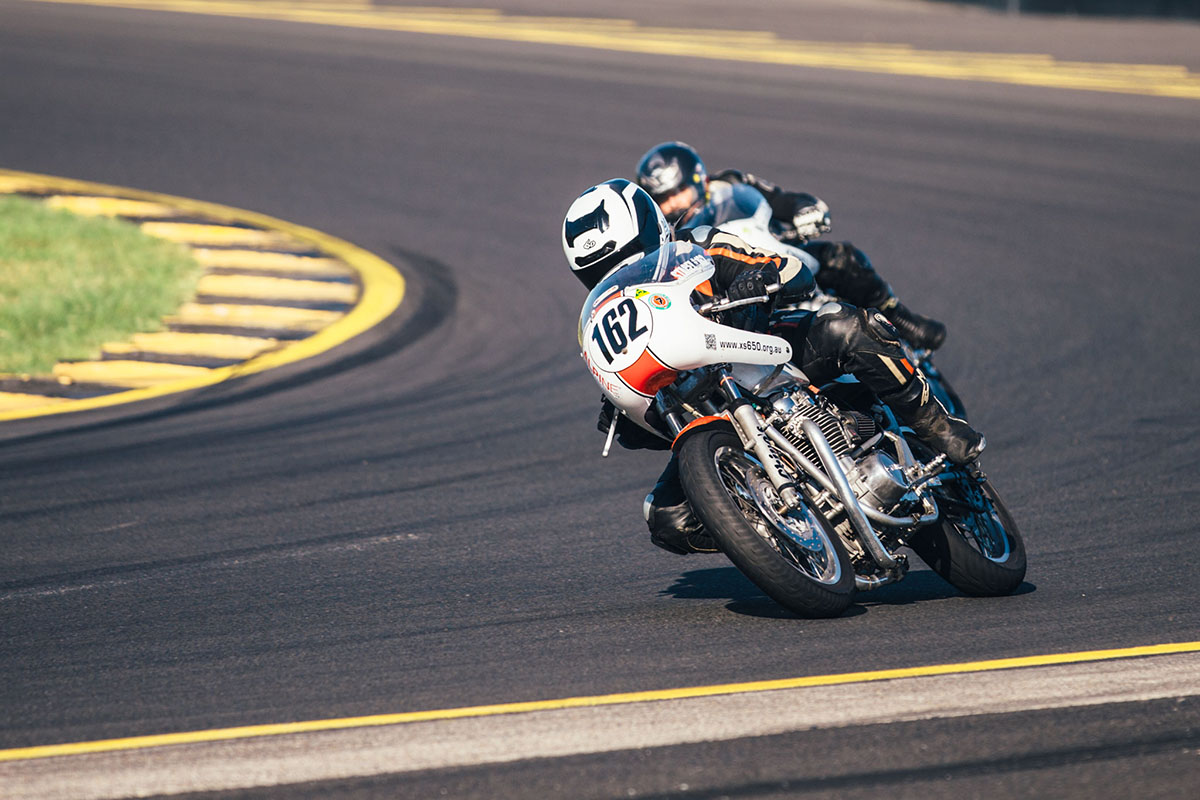 Stacey competes in International and Australia title level events across the country for both road and dirt. Some of her impressive results include – 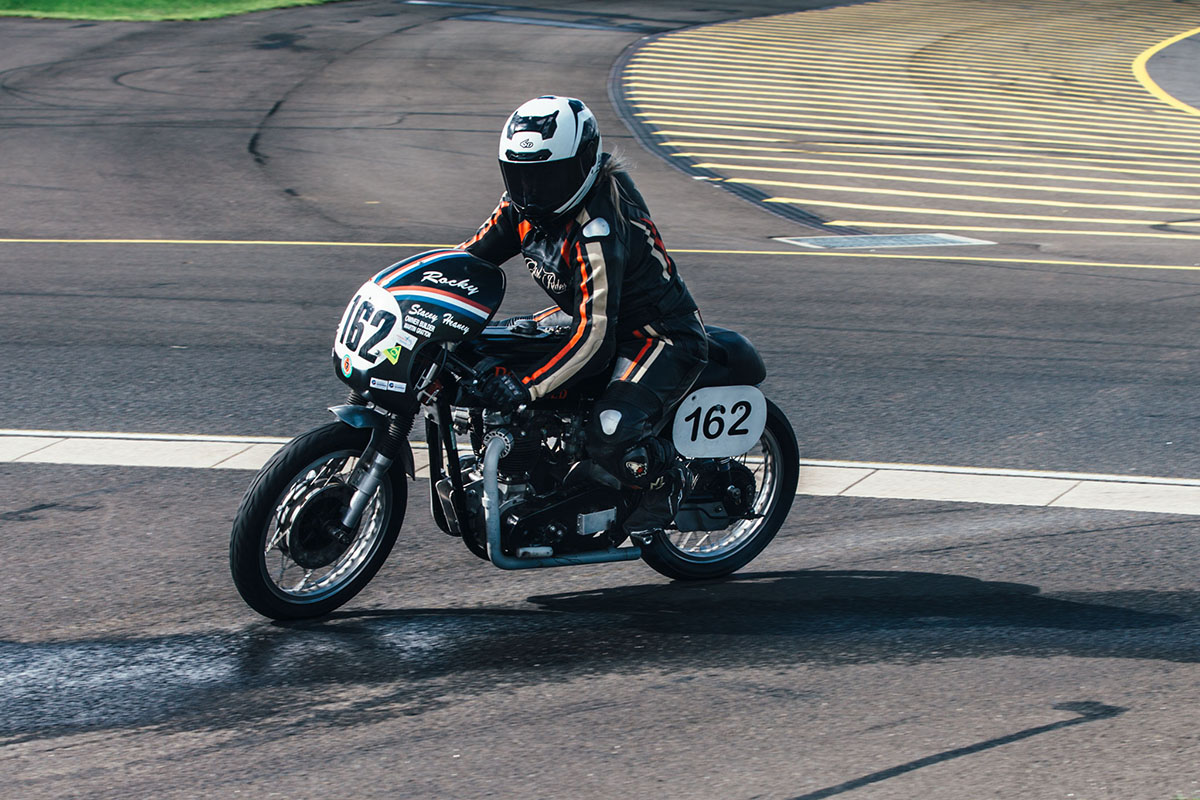 Speaking with Cailin from Stacey’s pit crew gave us a unique insight into the discipline and passion that fuels Stacey to take out the growing list of titles. “Having only been with Stace at races for the last year or so, I can tell you that the way she approaches races has ramped up in it’s intensity. From researching the track, to physically preparing herself with a gruelling workout regimen, along with her own personalised practice days at the family property.  She’s often talking with other great riders as well as studying the techniques of the professionals whenever she can. This is what has helped Stace step up her level of racing with sights set on International races in the not so distant future.” 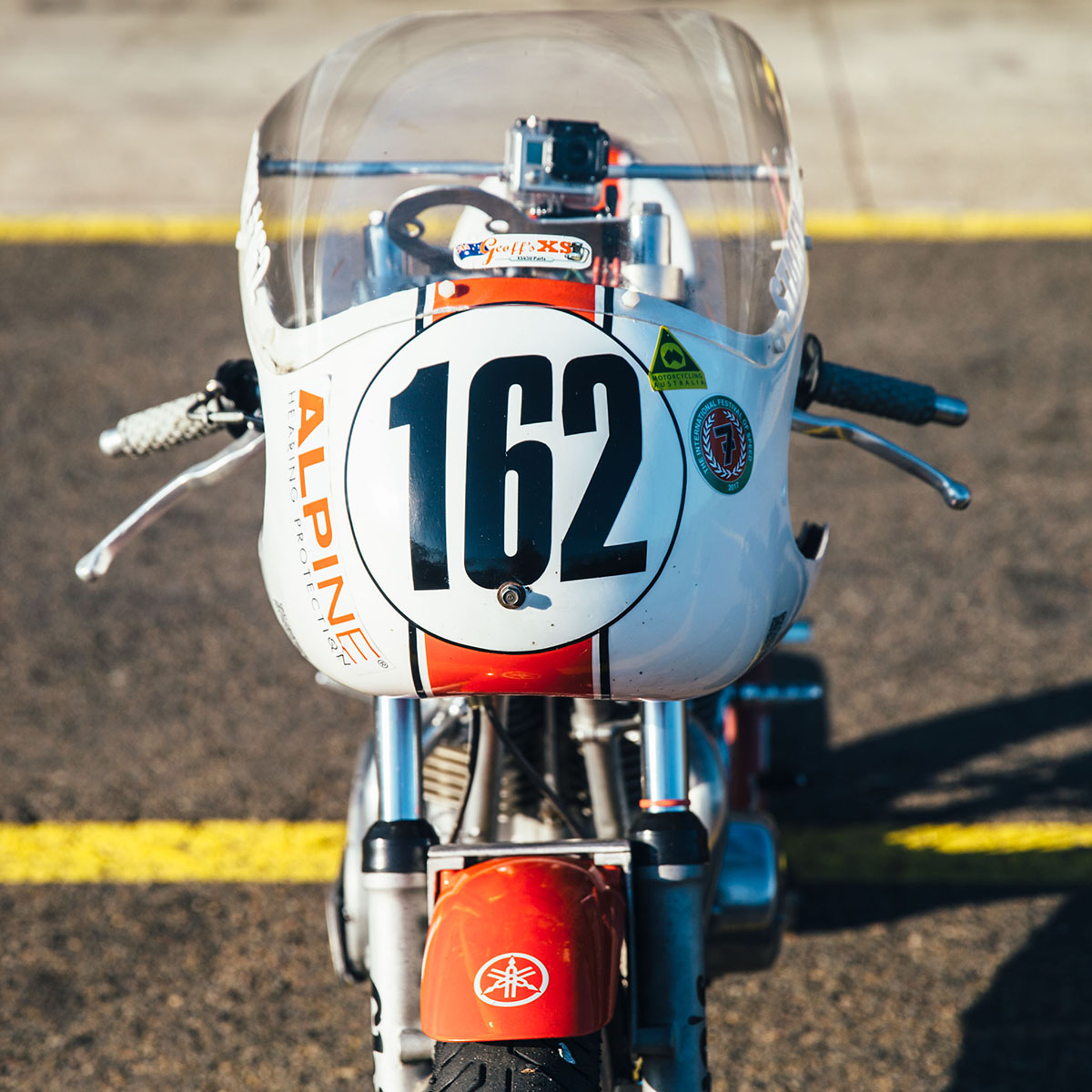 “Probably the 2 stories that stand out for me most in the last year for watching Stace race come from the International Festival of Speed this year where she was able to head interstate to a track she had never raced on before and in less than 24 hours of racing at the track she was able to beat the previously held lap record for P4 125cc class by more than 6 seconds. Really spoke measures towards her ability to focus on every curve and bump on the track and work her way into the ideal racing line – and it isn’t the first time I’ve seen her do that! I have to say my favourite racing memory though was after the racing had finished up at the Island Classic earlier this year, during the presentation ceremony they were announcing the front runners for the Phil Irving Trophy  (award for most overall points for the event) and as the presenter reads the first name, 10th place overall in points for the weekend, Stacey Heaney. It was in that moment I saw Stacey’s face go through a few emotions, firstly shock at being named along with some of the greatest of the classic motorcycle racing both in Australia and Internationally, elation due to the recognition of a hard fought event at one of the most challenging tracks Australia has to offer and then finally determination to take that moment and make sure that moving forward her name was going to become a permanent fixture amongst those named in that ceremony.” 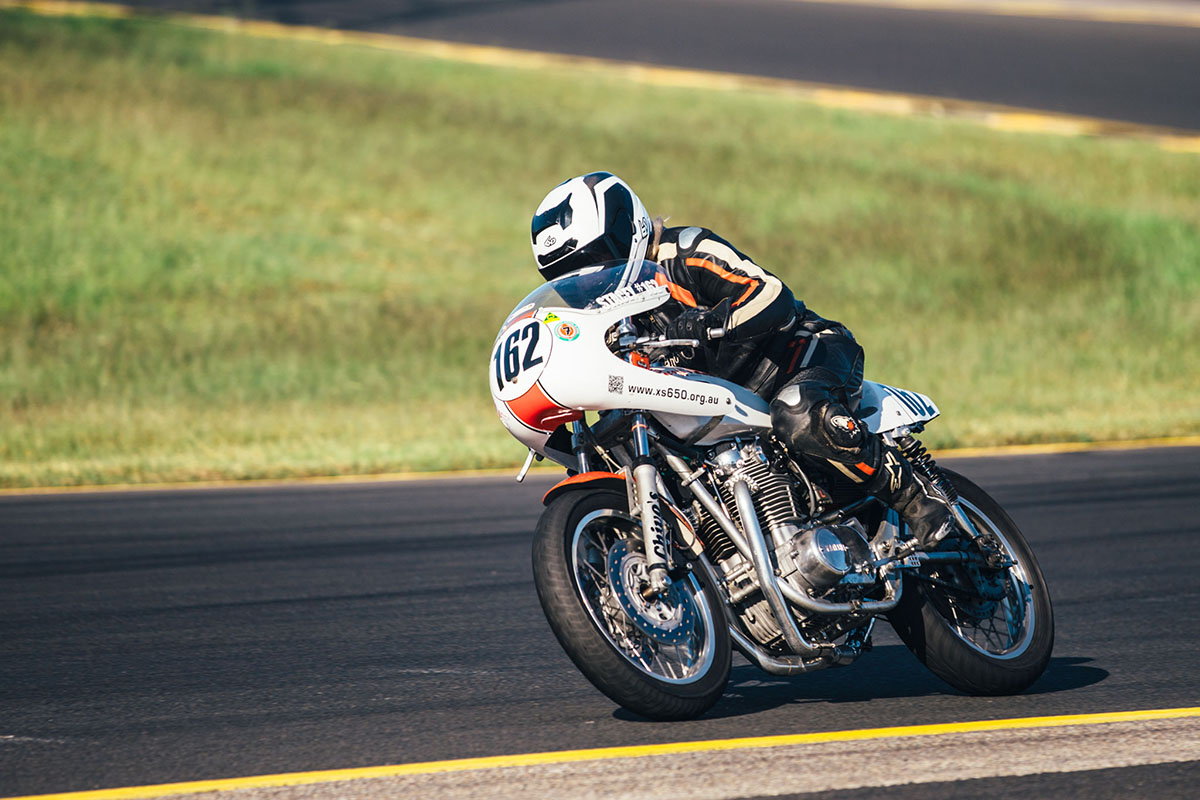 Try and be as humble as she can, when your own crew can easily see and recognise your drive and your love for the sport it truly speaks a lot about your ability – on and off the track. It’s hard to imagine Stacey doing anything else but ride and race

“Racing is my life. I tried call sports, and was terrible at them! I have built a family of fellow racers which I can’t wait to see on the weekends, and I think about bikes 24 hours a day. Working as a paramedic, my go-workers often think I’m nuts as we often attend to the fallen fellow rider, but the thrill and joy that racing gives me outweighs the risks and the fears. I still get the jitters and the nerves like the first time I lined up on the race track. I think that is what drives me to keep going. I remember my first race thinking “I have no idea how to do this, I’ll just give it my best!” and I still think that every time I’m out on the track. I suppose we never stop learning.” 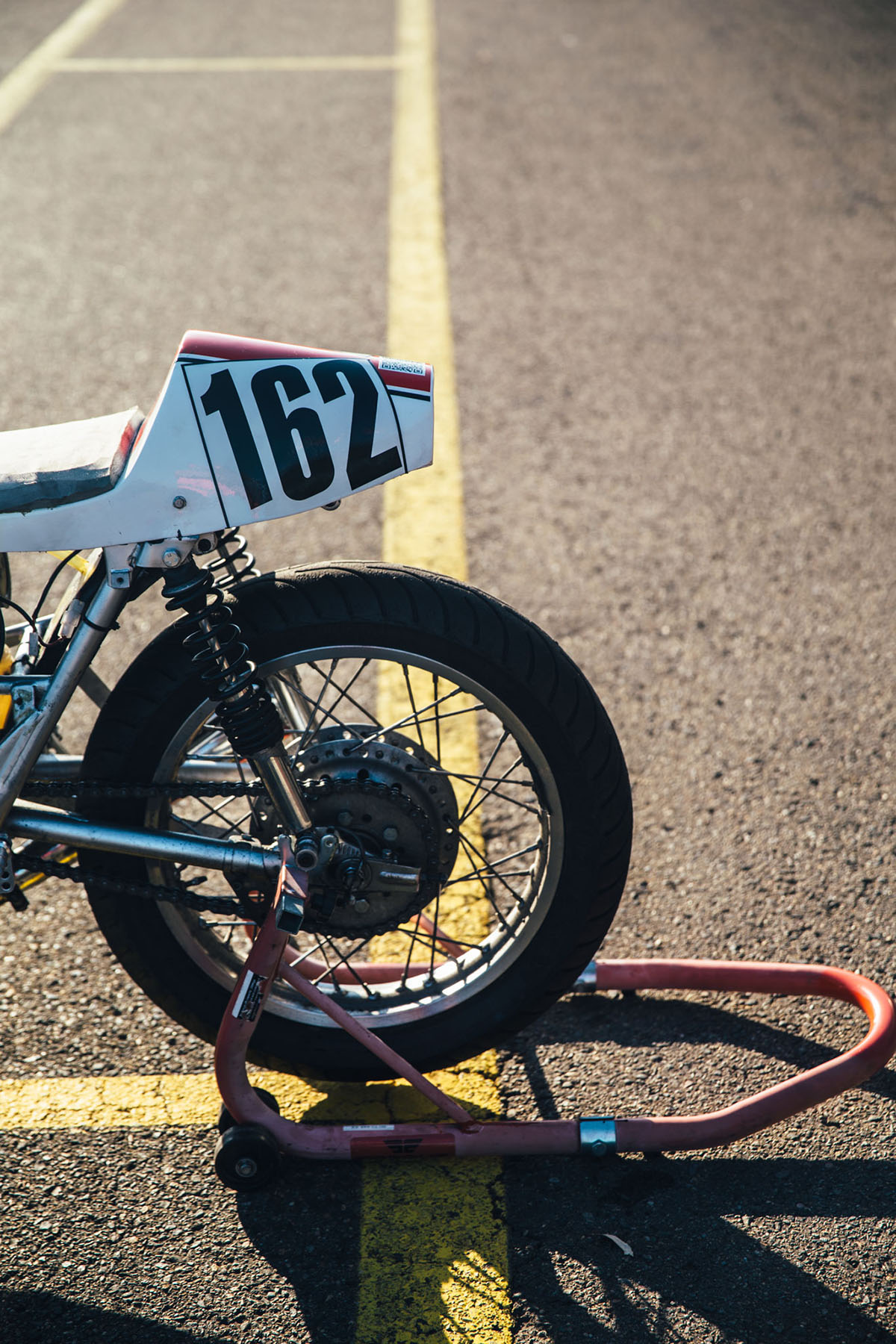 Stacey’s father Des, who also has taken on the roll of crew chief/biggest sponsor, makes sure the bikes Stacey rides are in good condition and running fine. With Des owning most of the bikes, he knows them like the back of his hand. “When Stace started racing she was a very cautious rider but consistent – she was determined to finish no matter what. I see that in her today, her bike could be falling apart from underneath her, but she’ll find a way to get to the finish line which in classic racing is a major thing. My favourite memory was from the 2016 Historic in Goulburn. The heavens opened up and it was bucketing down, half the riders pulled the pin on the spot because it was like a typhoon – but not Stacey. She jumped on the bike without hesitation and lapped the field. At the end of the race all she said was “Well I’m not here to play in the pits am I?!” 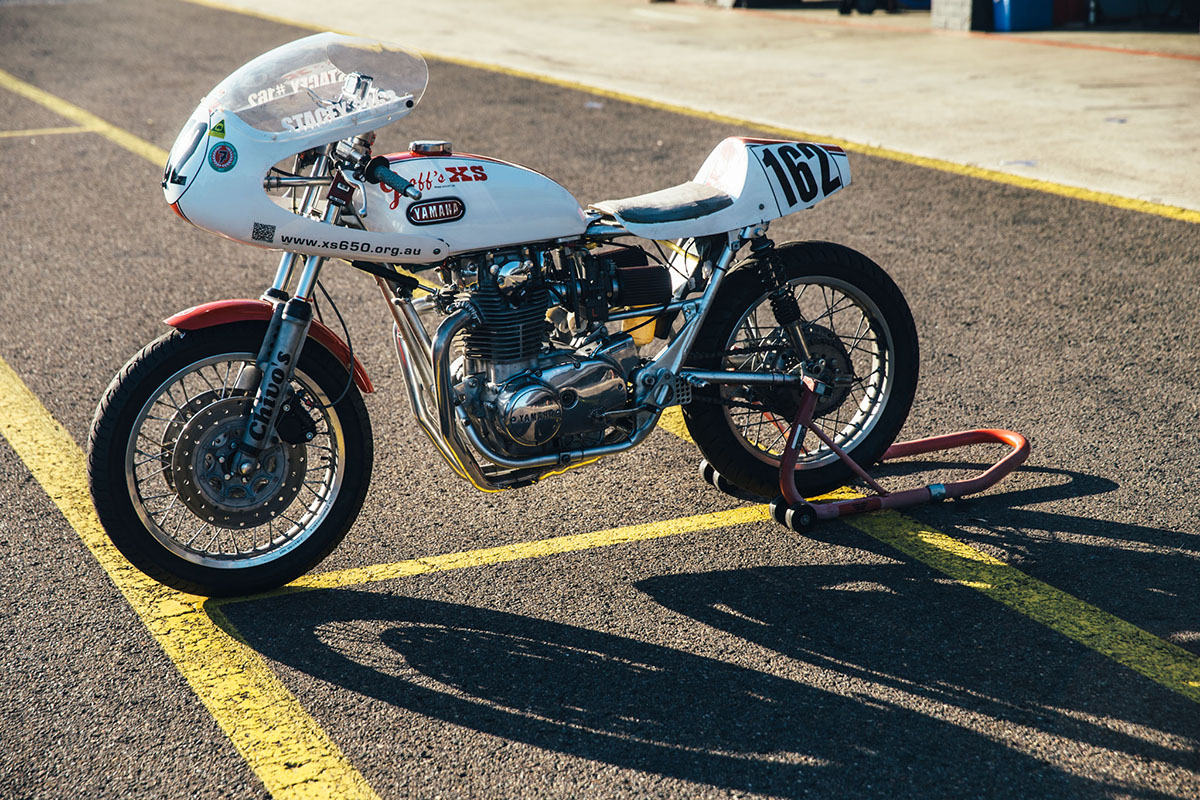 Des’ stories of Stacey’s racing career is absolutely bursting with pride, and for a good reason. Sharing the passion for racing between father and daughter is a remarkably unique and special relationship. It might very well be part of the key to Stacey’s success – taking out wins so that Dad has plenty of great stories to tell at the pub for all to hear. “Another great memory of Stacey racing is the day she became the first Queen of the Mountain in 2014. Mt Tarrengower is a Hillclimb in Maldon Victoria on a 1972 Honda 750 Four. It had been won 13 years in a row by Mick Panayi with Stacey coming in a close second for 3 years running. With bald tyres that fellow competitors stated “should be wrapped around a lemon tree” and determination in her eyes, Stace took off on a blistering lap climbing the winging cliff roads of the mountain to claim the title. She became the first female to win the event in it’s 114 years of running – beating cars, bikes, and sidecars.”

“A great memory was when Stace was racing classic motocross. Stace often races 3-4 bikes a day so spends the whole day with a helmet on. A fellow club member saw Stace doing well on her 250 and asked me “Hey Des, your son Steve is doing all right, would he like to have a go on my triumph?” I just had a laugh and said sure Steve will give it a go. I pushed the bike over to Stace and said go out ride this bike and tell the owner how it goes. She went out and won the class by half a lap. When she pulled in and took the helmet off poor Phil nearly had a heart attack when he realised he just gave his bike to a girl not a guy. That was 5 years ago now, and to this day he still gets Stace to race his Triumph and swears she is his best team rider – even if she is a Stacey not a Steve.” 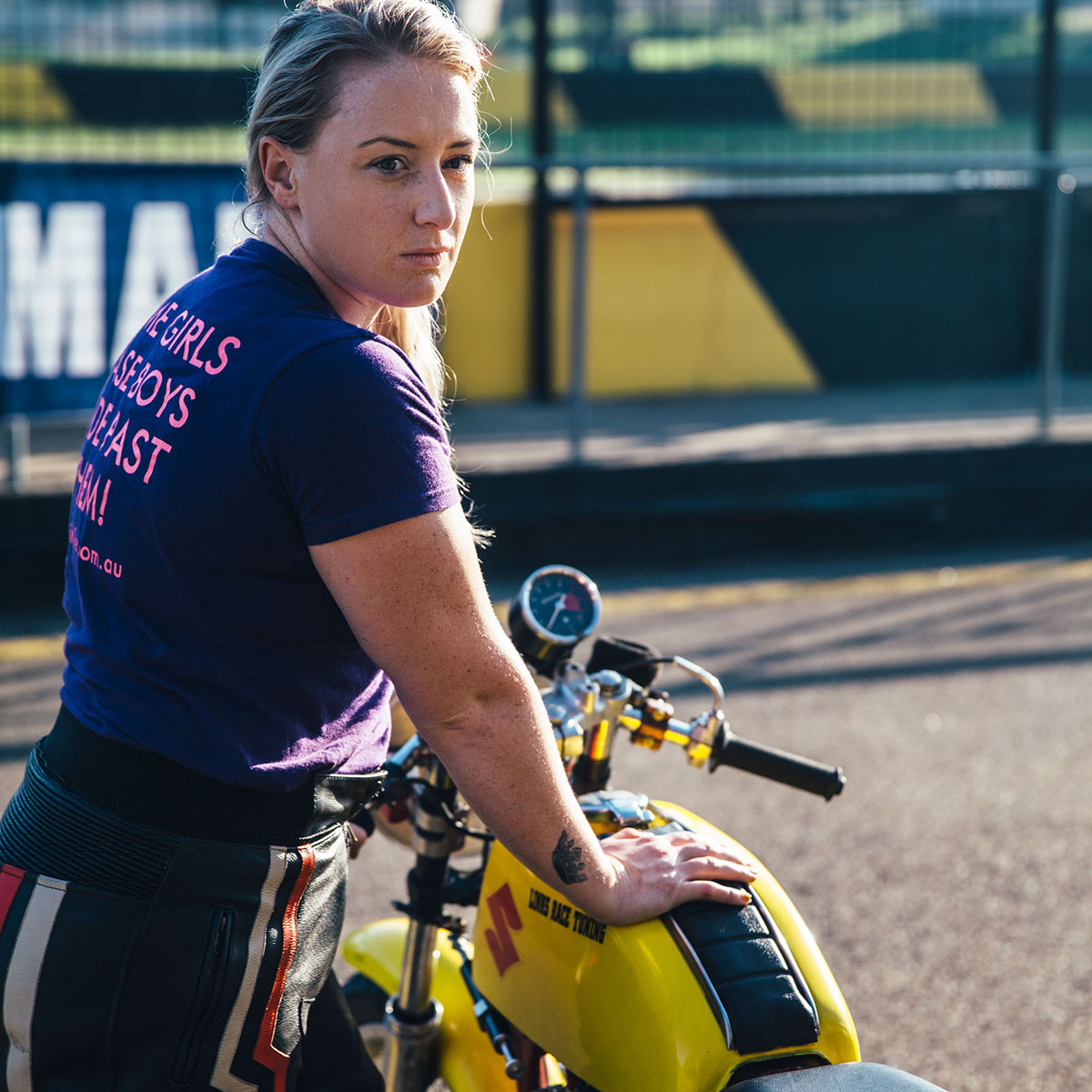 For Stacey’s daily rider, she’s got a ’98 Suzuki GSXR600, along with a KTM 350exc for going bushbashing. “I find that enduro riding is a fantastic way to improve key skills for the race track, such as fitness, throttle control, braking and terrain selection. Before every major race (both road and dirt) I’ll go out bush to prepare.” 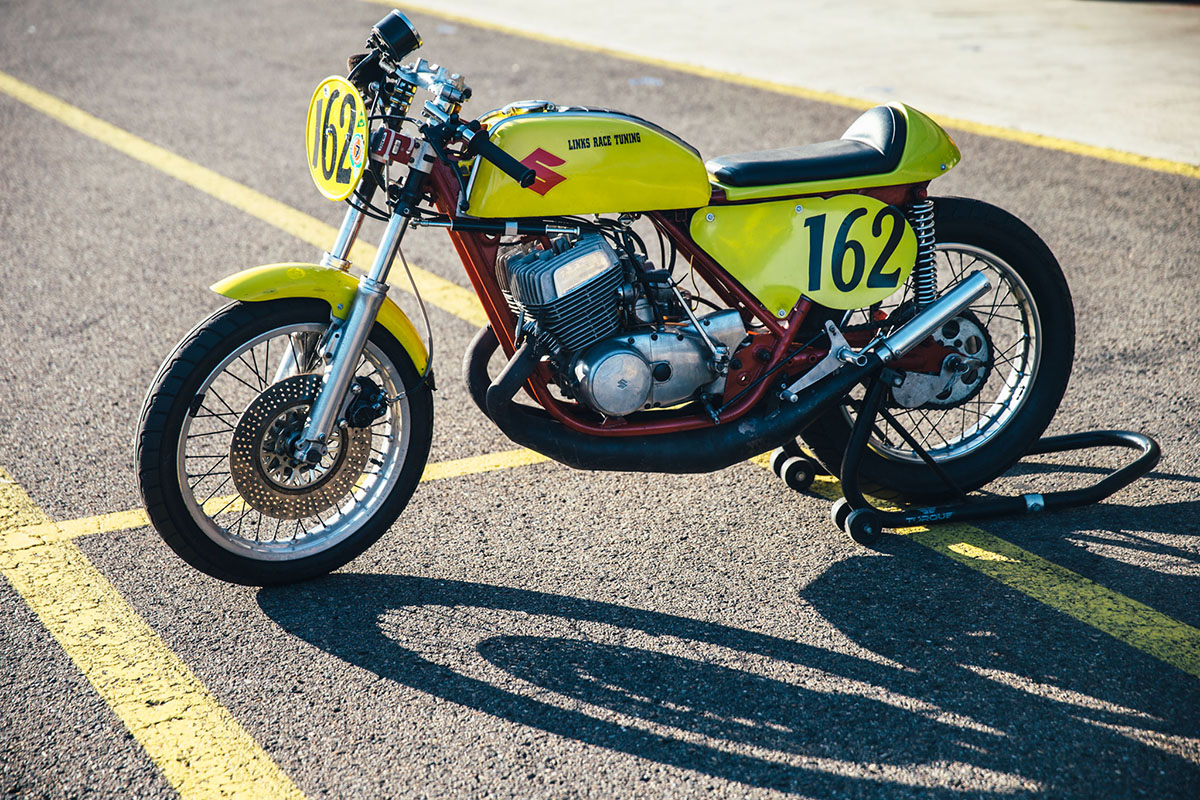 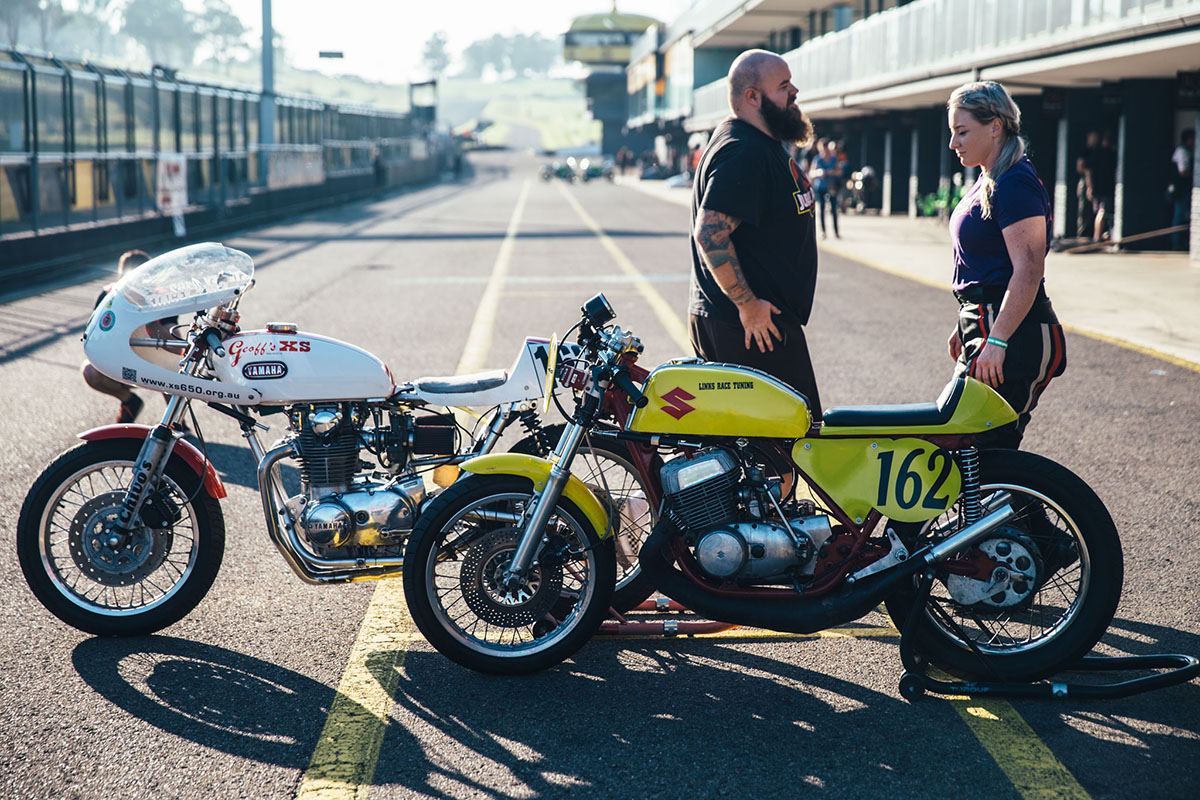 “The future for me now is to go international. I hope to go to major classic events such as goodwood festival, and the classic TT. Australia is yet to be represented by a classic female racer over there, and I hope I can be the one for the job. Until then, you’ll find me on the grid at all the International Australian events, and all the classic events in Victoria. 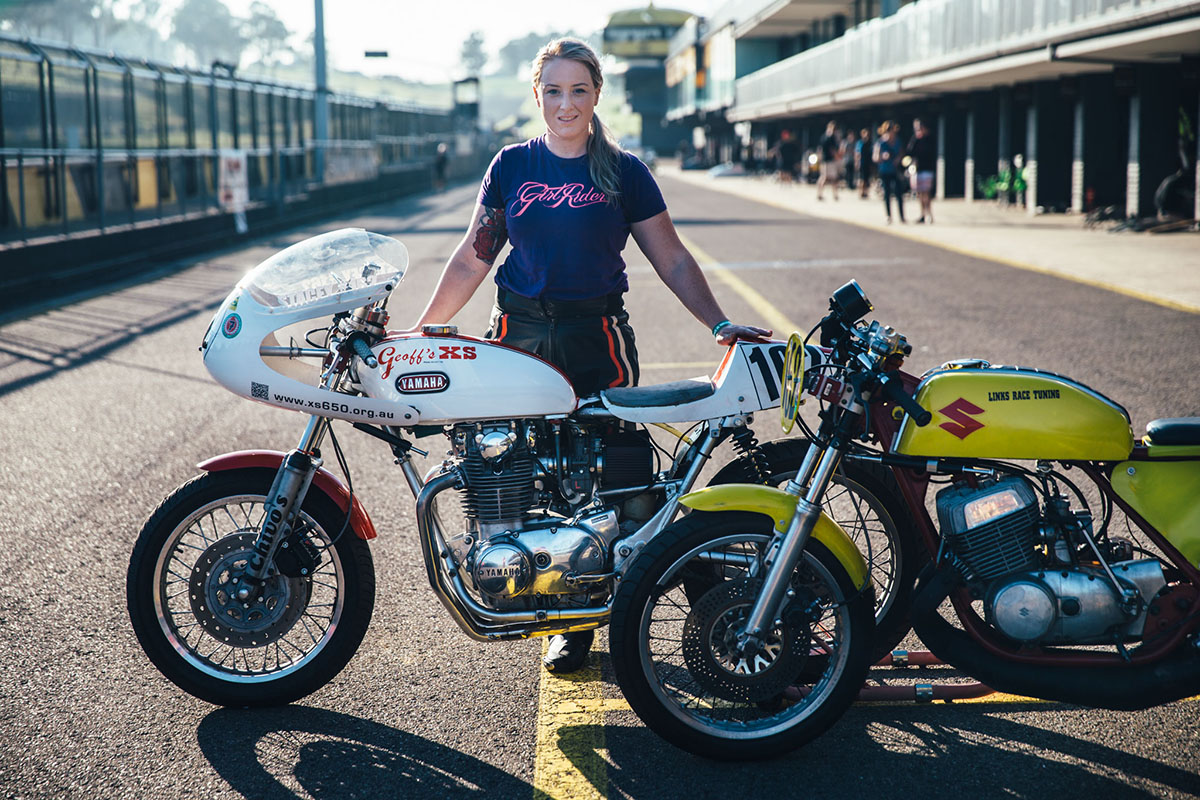 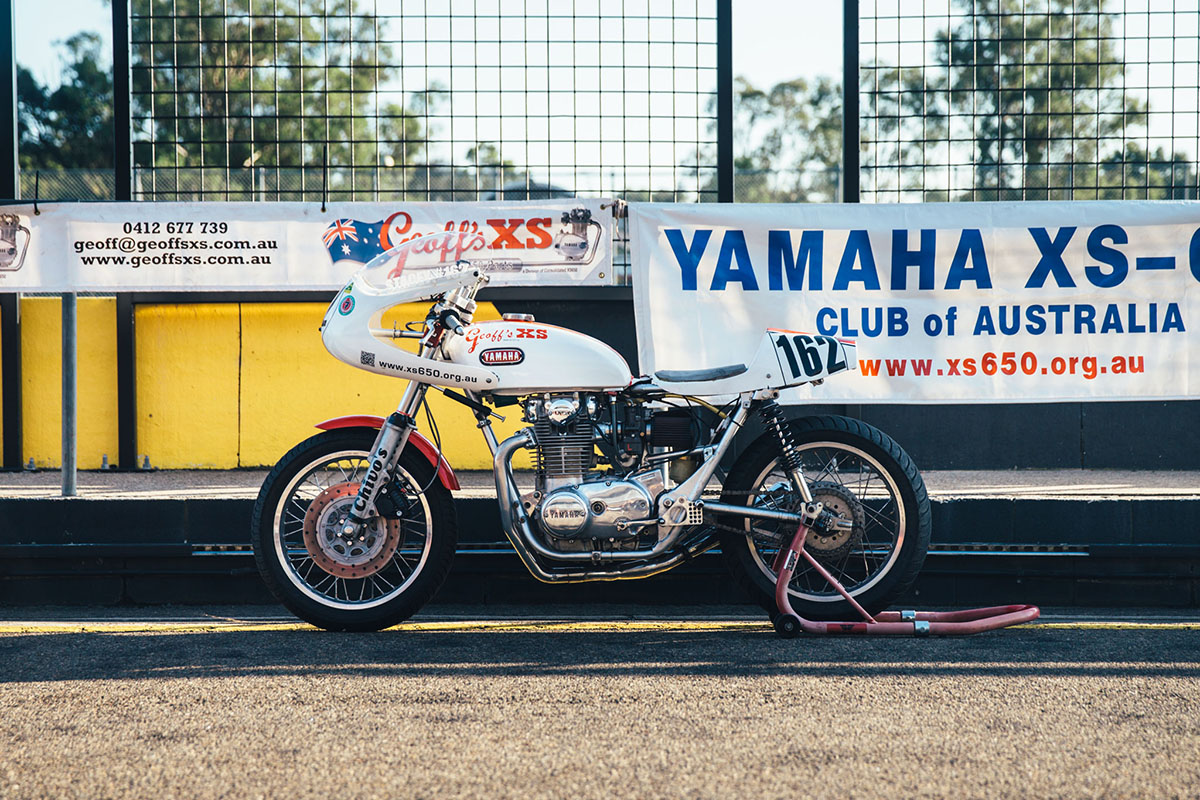 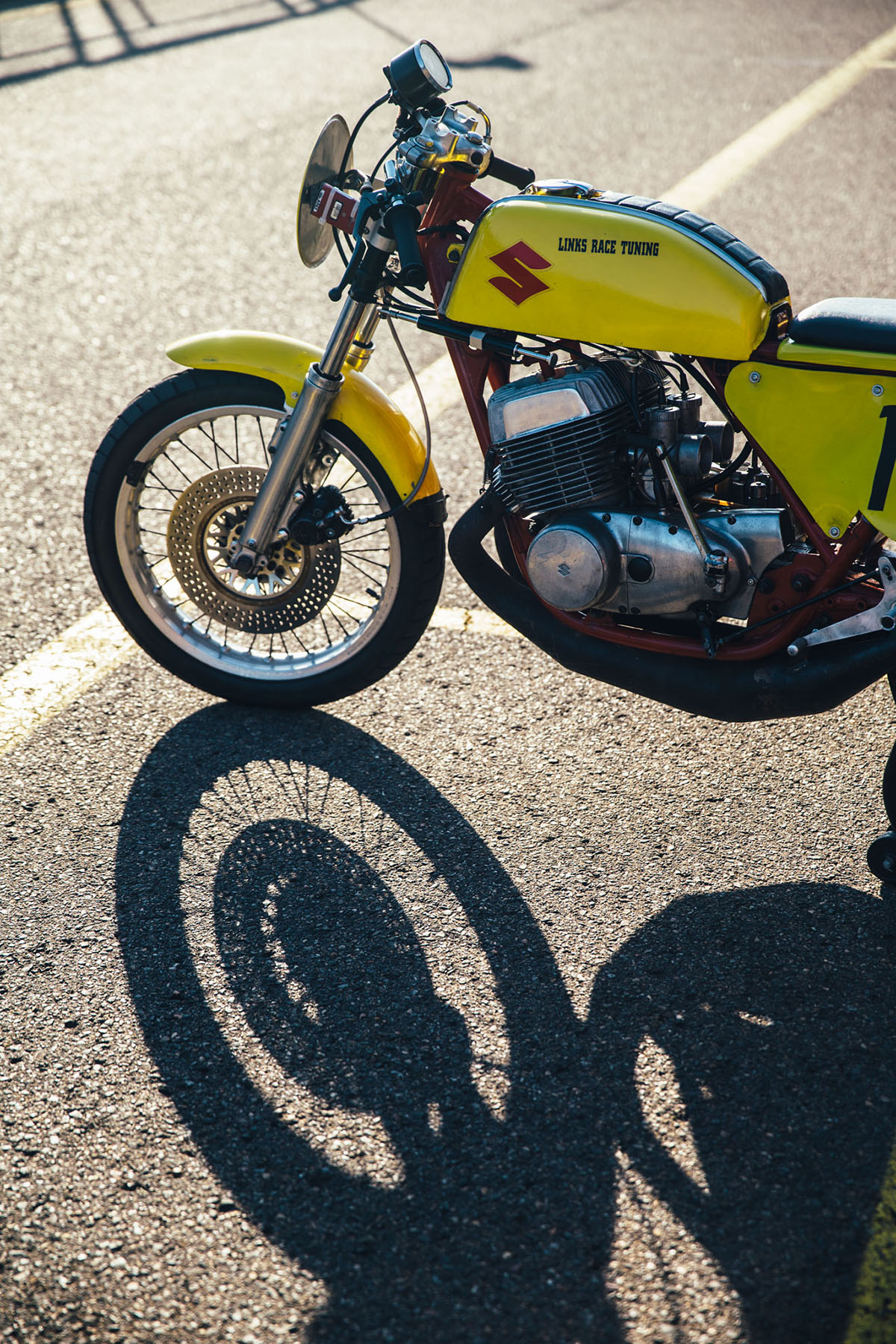 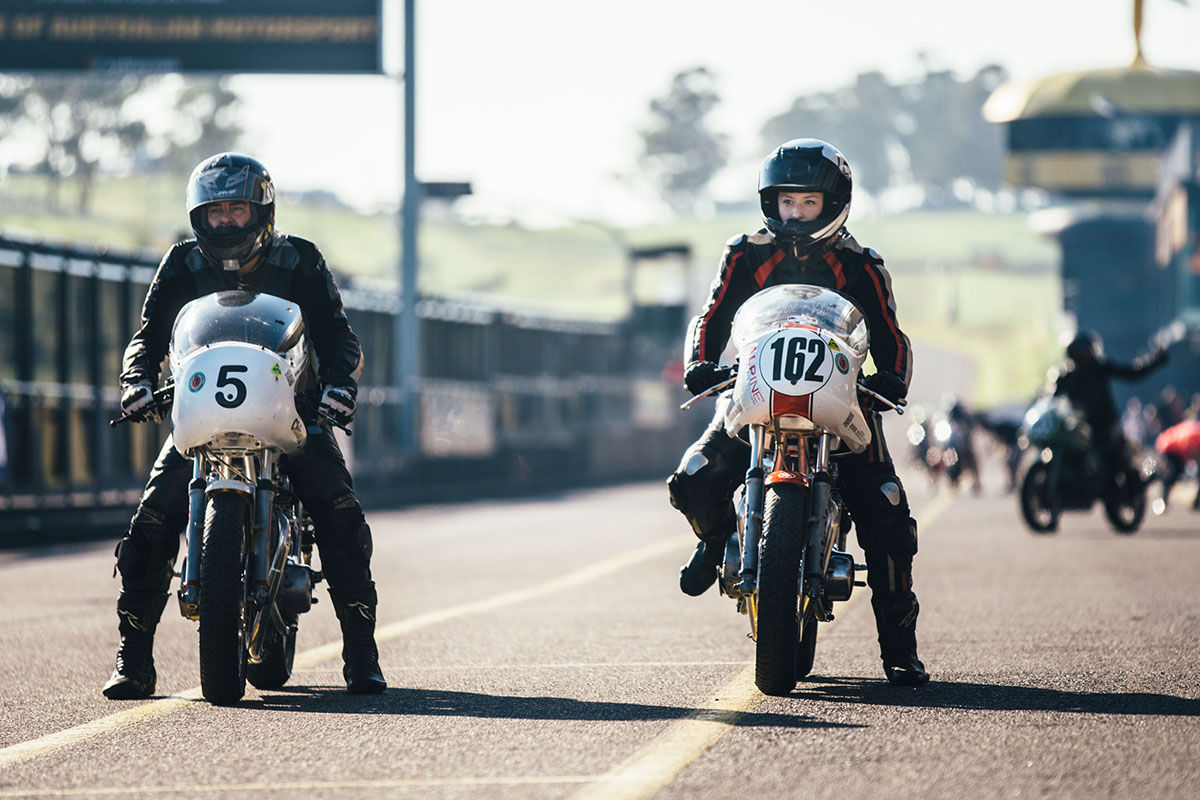 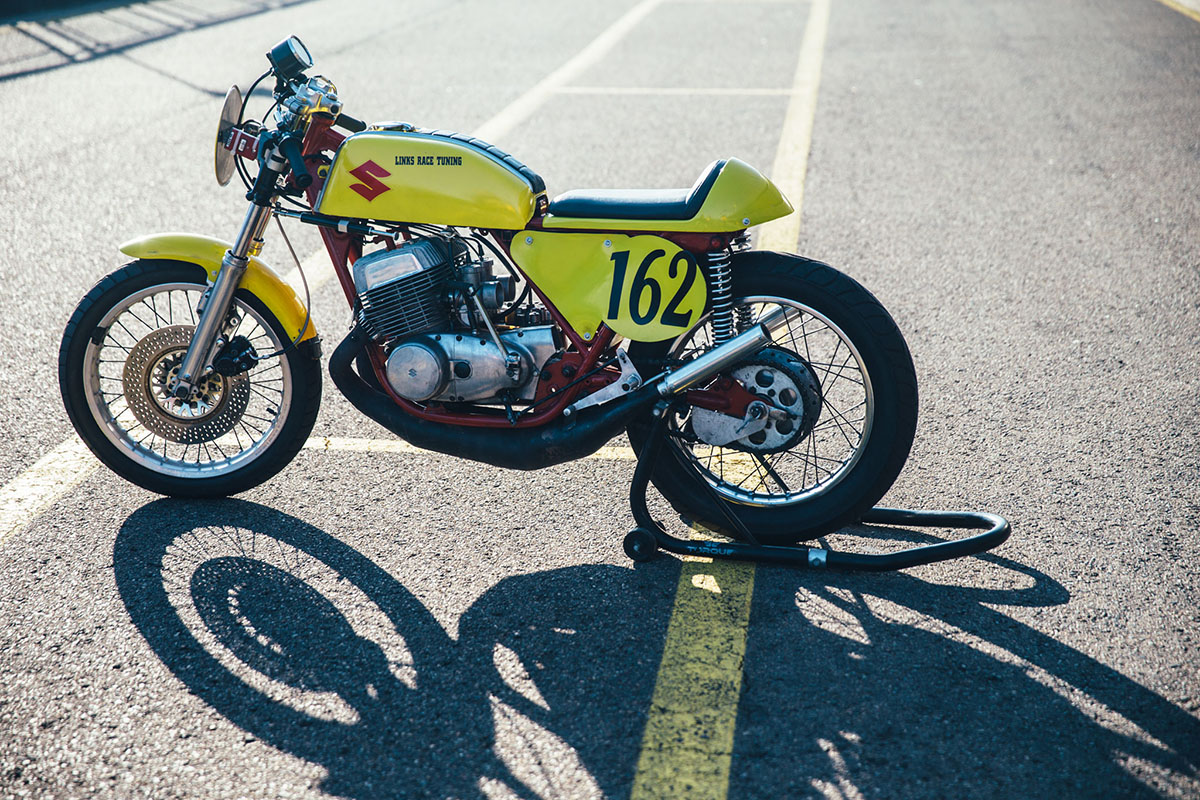 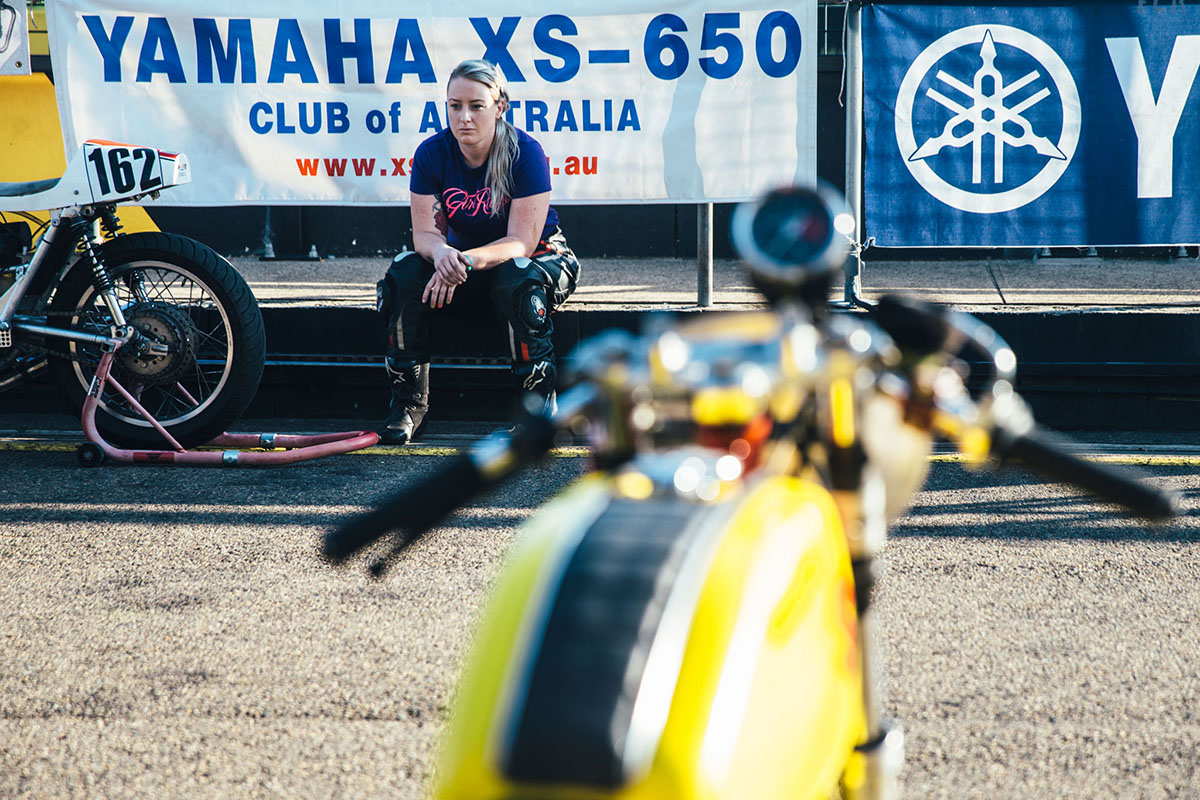 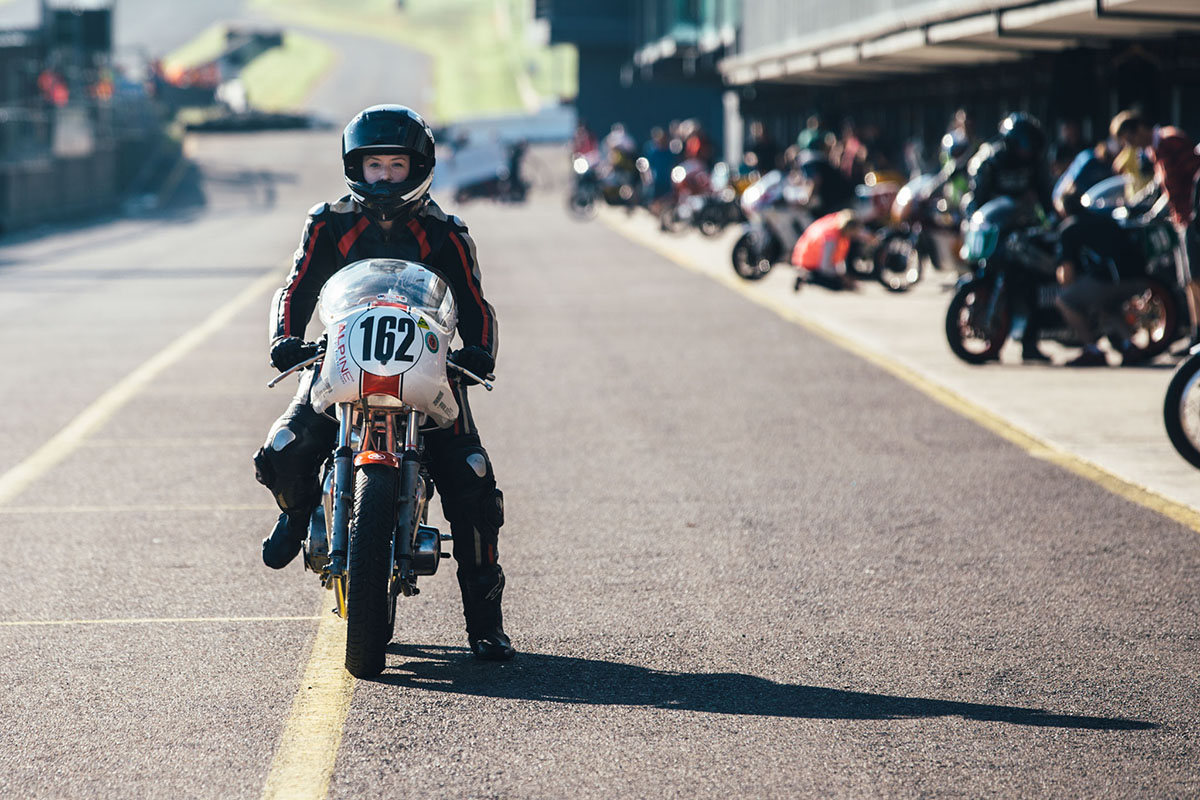 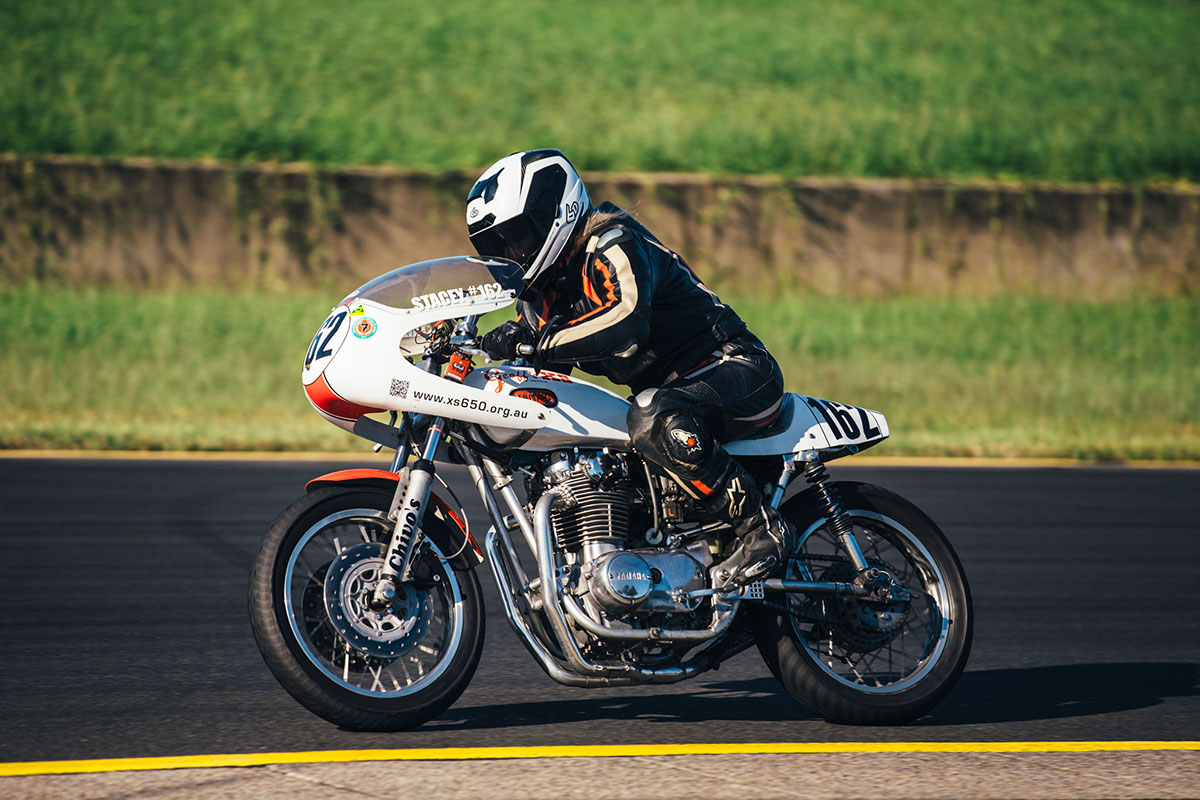 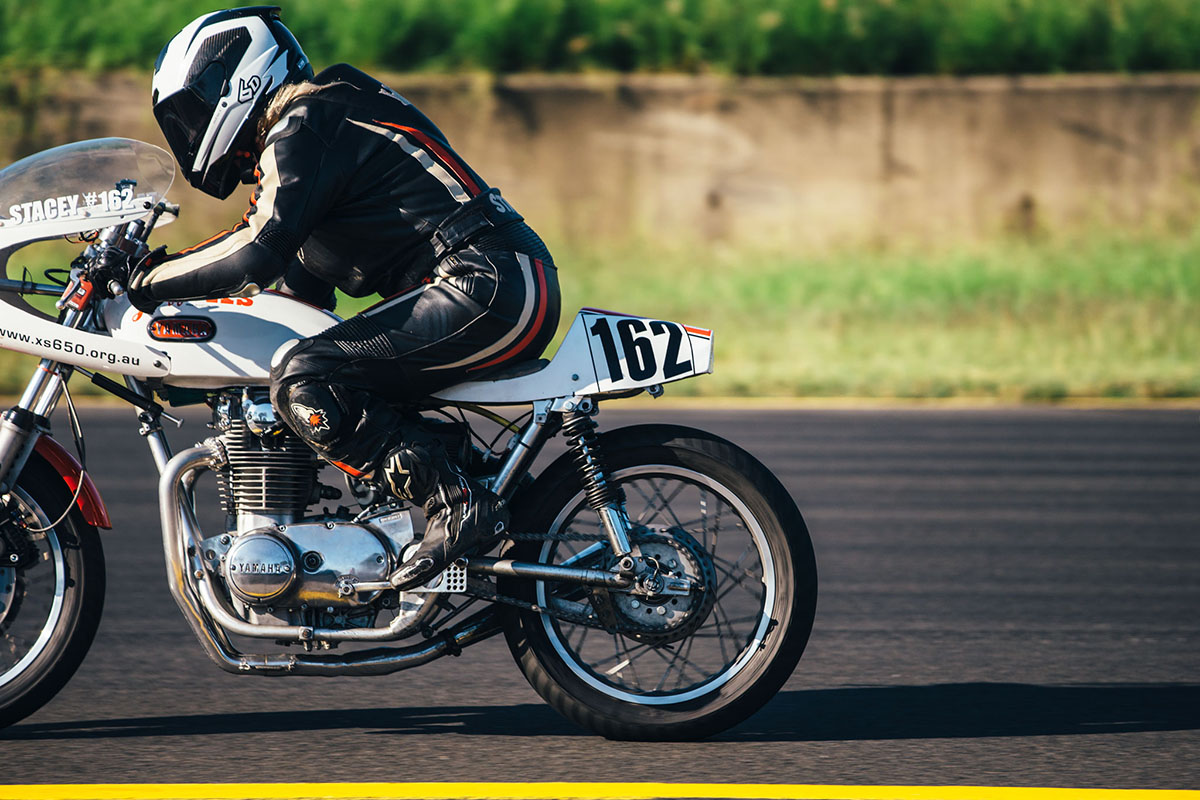