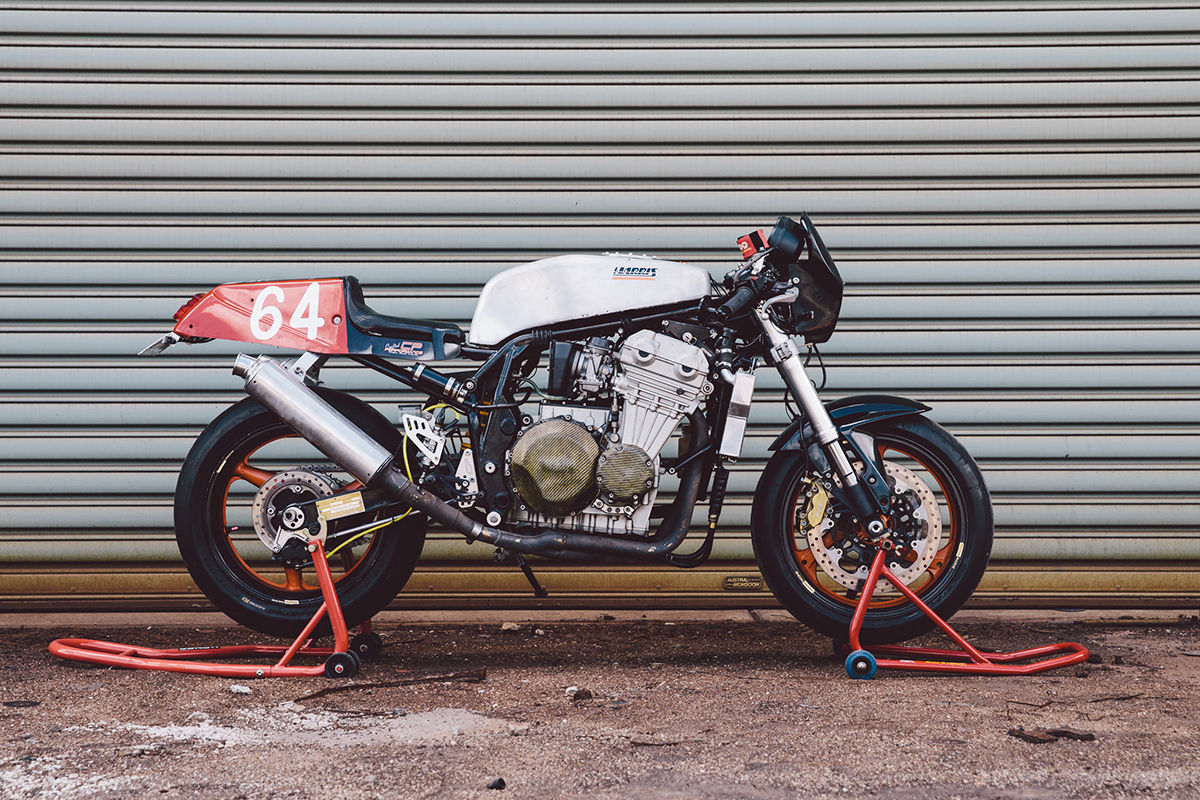 It’s been over 30 years now between Phil and this machine. This history would all begin one fateful evening at a pub, as Phil and a mate were tucking into some pints, talking about some new parts that were available. “It was back in 1986 that I had bought the race frame kit. A mate owned a bike business and mentioned these frames that he could get a hold of. In those days it was quite common to build Harris, Bimoto, Moto Martin, Egli (British/Italian frame kits for big Jap engines). I had just bought a brand new Kawasaki GPZ900R, and so sold off the parts I didn’t need to get started on this new machine. I seem to remember that I got more for the OEM frame, tank and fairings than what I paid for the Harris kit! (I still have the original receipt for the whole kit as 1614 pounds).” 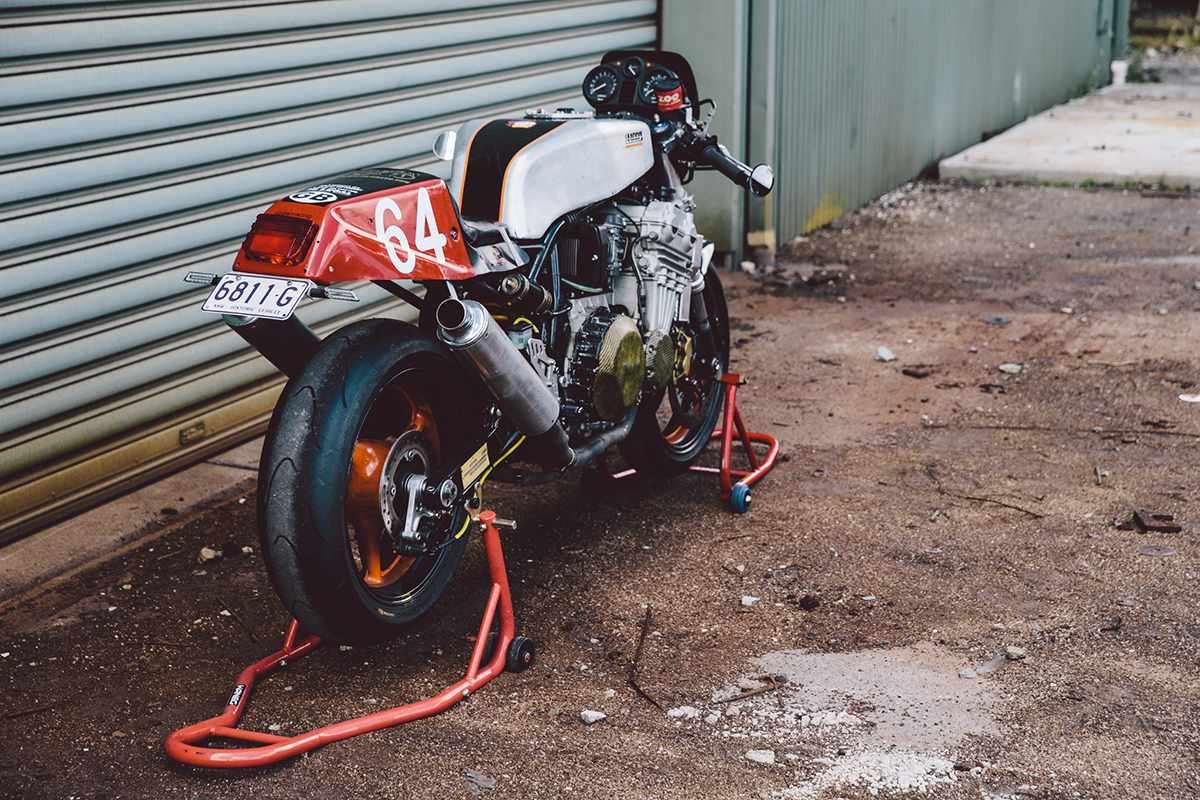 The history of this machine goes back a tiny bit further than that evening at the Pub with Phil and his mate however. In 1985, Phase One Endurance team wanted to race in the Bol d’or 24-hour endurance race. To comply with the homogeneous rules and race in a production class, Harris Performance made 24 frame kits. Phase One raced one of these kits, another kit was bought and raced at the Isle of Man that year, and Phil would buy one himself. “I guess the remaining 21 were also sold off. Phase One Endurance raced the bike with a Kawasaki GPZ750R motor, while I built mine up with the bigger bored GPZ900R motor.” 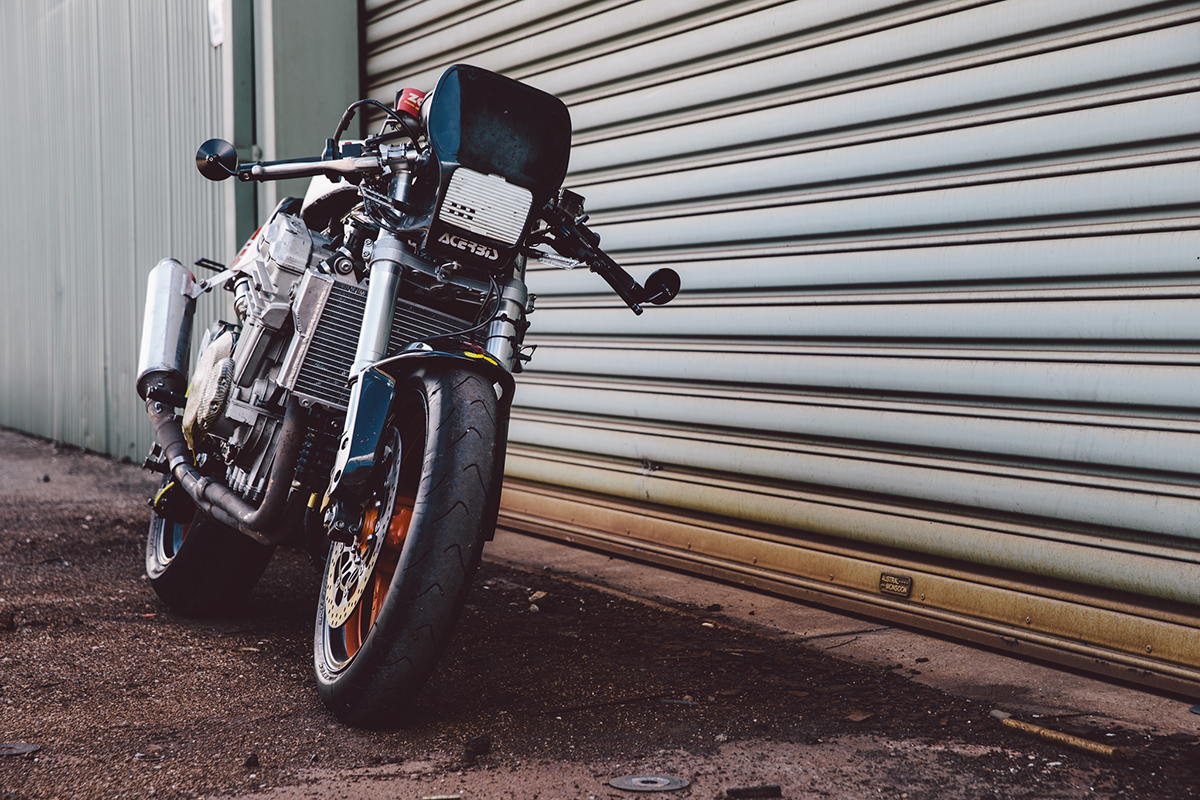 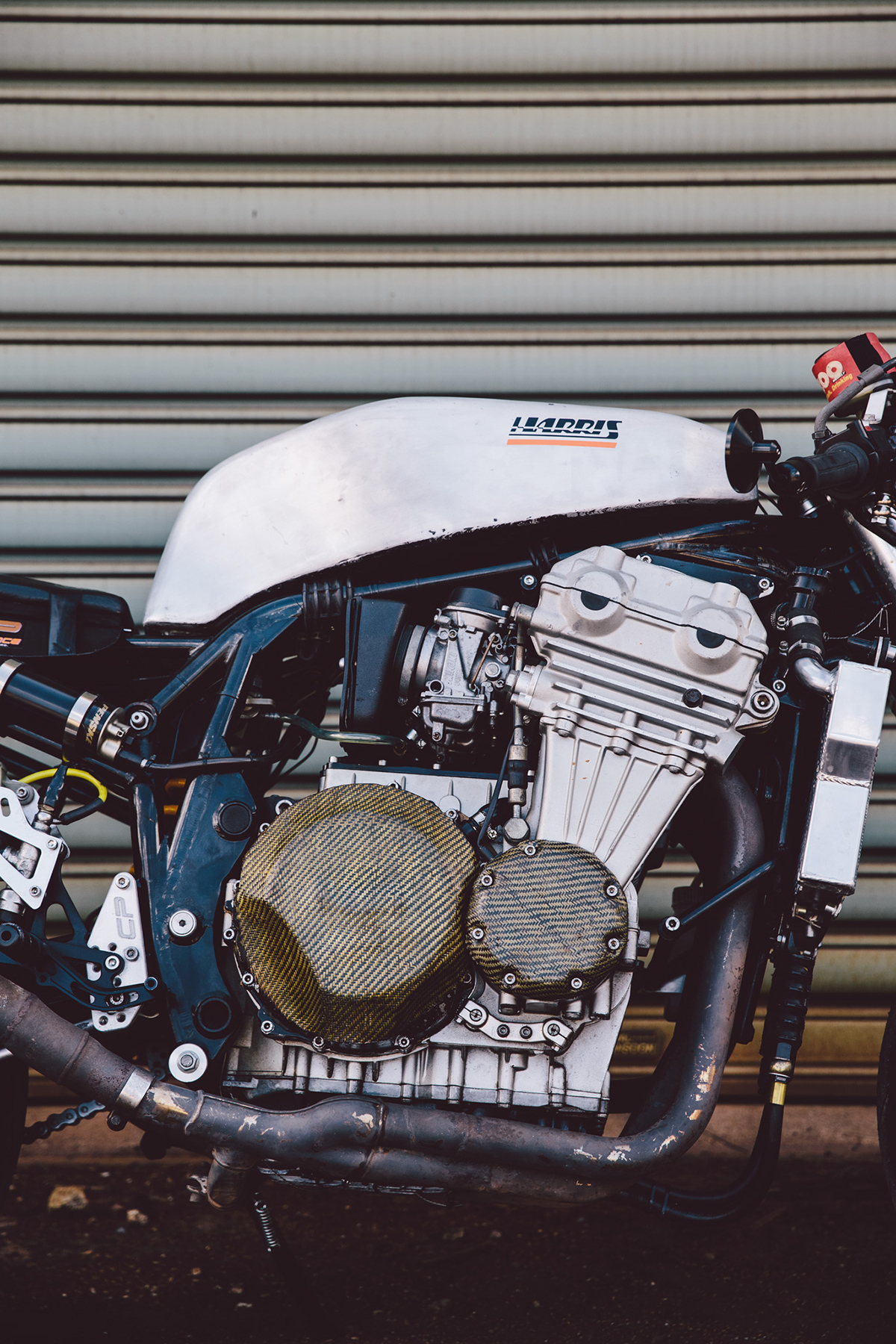 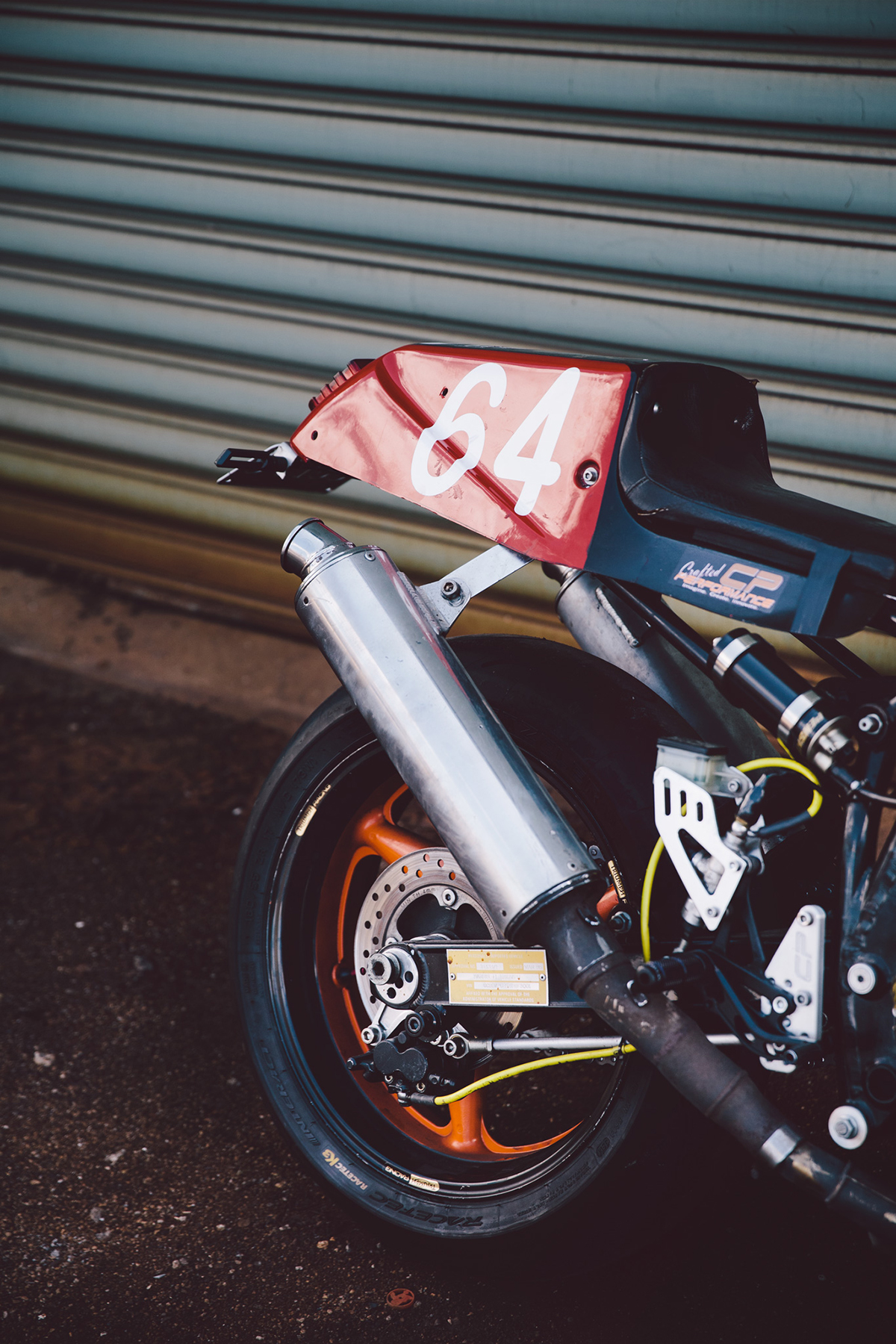 This would not be the only incantation of this machine, as mentioned previously this bike and Phil have had a 30 year relationship together. Not one to let things get boring or stagnant, Phil would change the machine over the years to suit different needs.

These key different versions of this machine include – 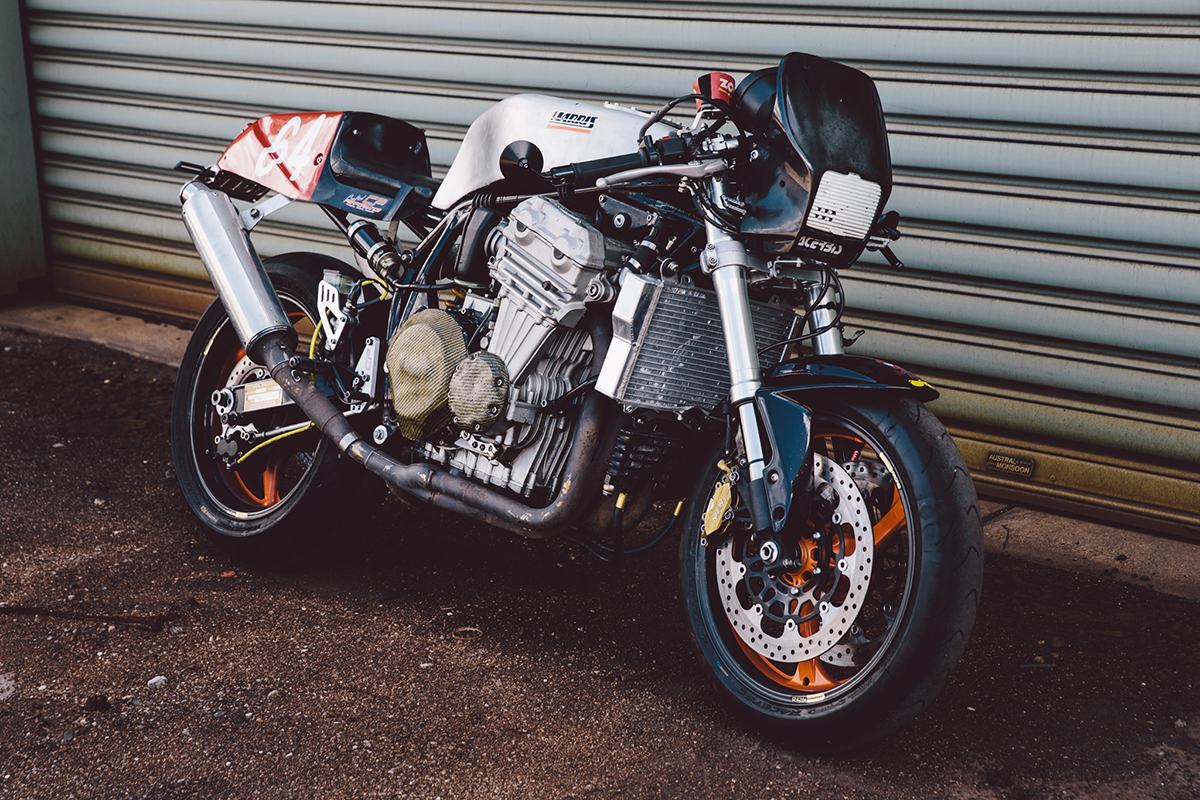 “The Frame kit was pretty much the frame, tank seat, rear swinging arm, rear wheel spindle, shock and linkages, engine and radiator mounts, front triple trees etc. You basically had to bolt in your OEM wheels, brakes, engine, and radiator. Remake the wiring loom, fit after market air pods and exhaust and you basically had the finished bike.

I never bothered with the fairing kit, preferring a more naked look. I then registered it for the road as it was my daily ride to work and pub duties.

This build became a bit famous as it was used in the Blood Runners promo film. (Blood Runners was a cartoon in the back of Bike magazine and there was an attempt to make a British Mad Max film, heavily sponsored by Kawasaki back then base on this cartoon) The Harris was the bike of the main character “Jack Sh!$” and did a few wheelies and doughnuts in the promo.

In 1987 I rode it to the Isle of Man TT races with 22 other mates. The week was epic (many beers and many laps followed by many beers) until I entered the Ramsey sprint. This was a 1/8-mile drag race along the curved promenade. With the bike having such a short wheel base, the only way to launch it was to drop the clutch at 9 grand, followed by much wheel spin and subsequent wheelies along the 1/8. After about the 7th go, the clutch gave up, resulting in the bike jumping forward 10 feet then stopping very quickly (read – the clutch exploded into hundreds of fragments, taking out the rest of the internals with peppered shrapnel). Bike magazine helped get the bike back to the B & B in Douglas and helped me in my sorrows with again, many beers.” 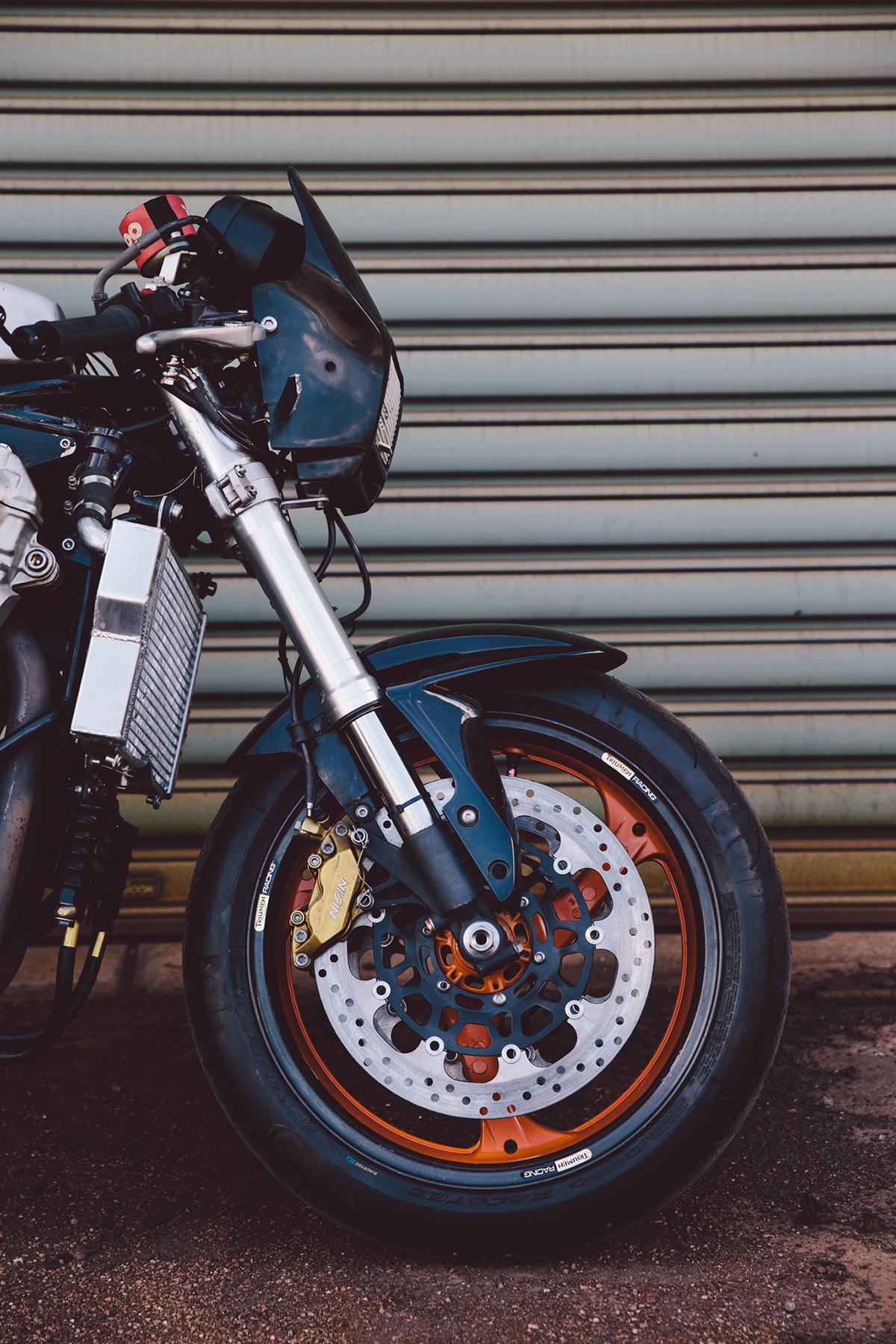 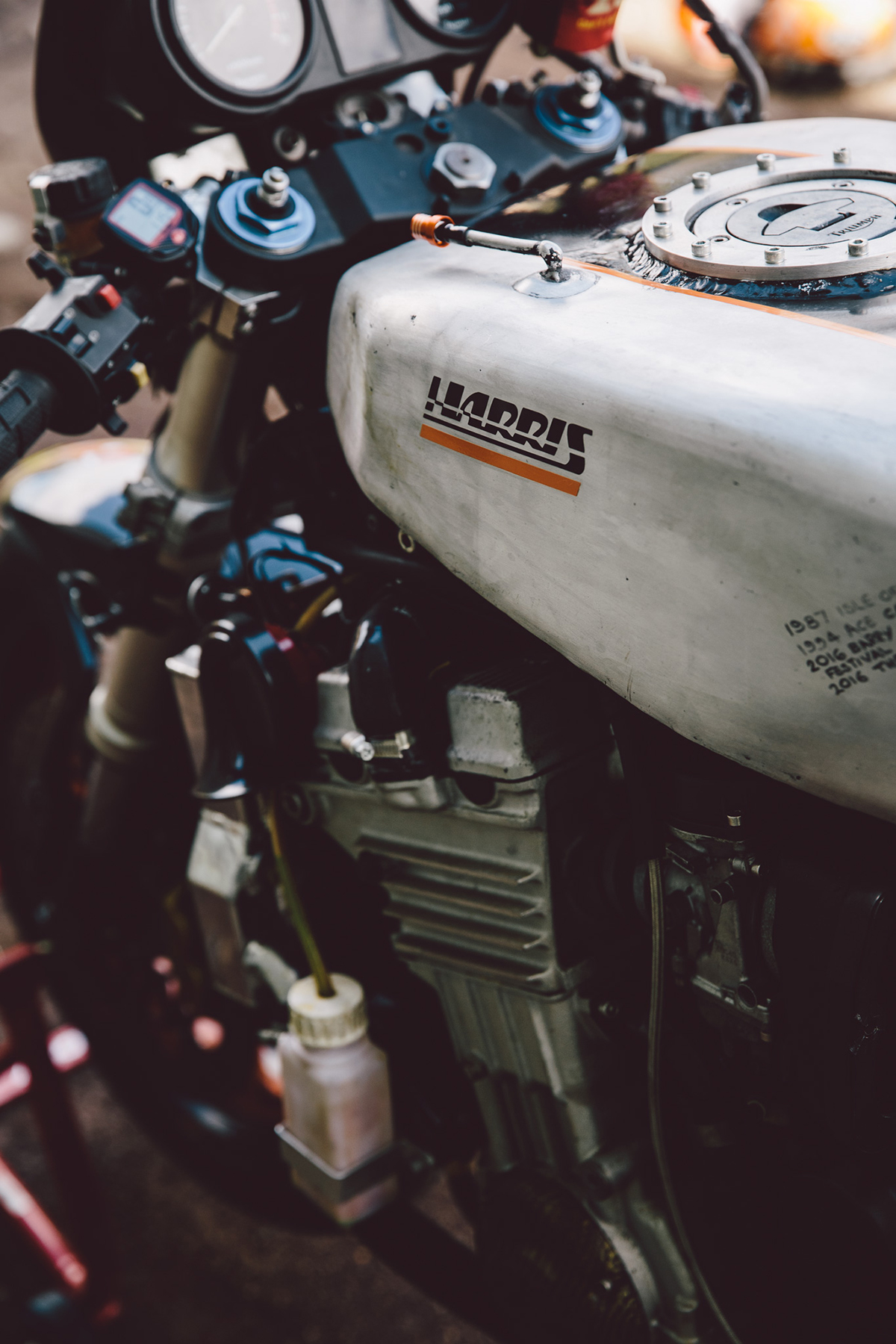 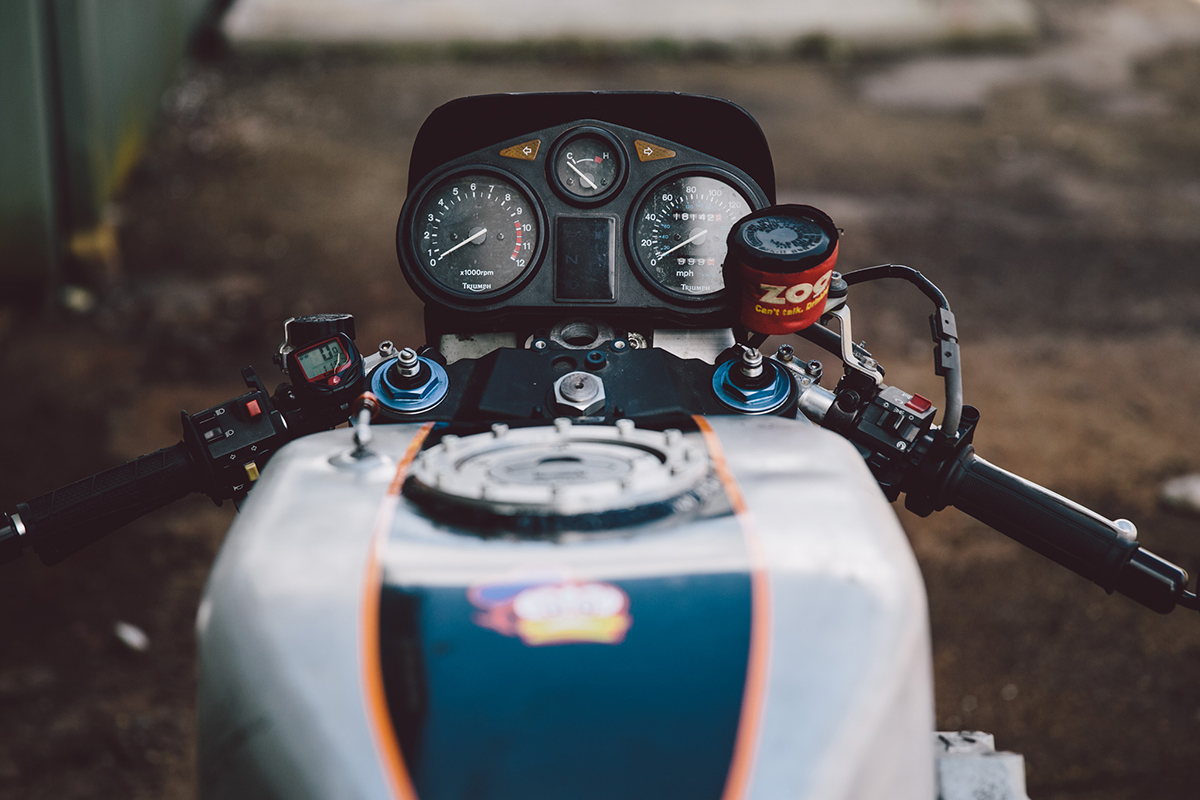 “I could have rebuilt it with another Kawasaki motor, but at that time John Bloor had just bought out Triumph and was resurrecting the marque (into what we know it as now). The first part they developed was the engine and in the UK bike rag (Motorcycle News), there was an exclusive spy pic of a Kawasaki GPZ 900R spotted with what looked like a Triumph motor in it.

My first thoughts were that if the Trumpy motor was fitted to a GPZ, then one might fit my Harris? I phoned Triumph to see if I could buy a motor, but I was told in no uncertain words that they were about to try and break into the American market and that they didn’t want any bastardy’s bikes on the road. I could buy a complete bike… or nothing.

I then went in search of a motor. When you bought a new Triumph, they offered you hugely low and attractive insurance deals that most (if not all) new buyers took up. One of the clauses was that in the event of a claim, Triumph would have first offer on buying salvage. Net result of this was you never saw crashed Triumphs in a wrecker! This made my search harder, but I religiously scoured the MCN rag every Wednesday for over a year until one wrecker in East London had a crashed Triumph Daytona listed for sale. I left work, jumped into my van and drove up to Chelmsford to look at the bike. It seemed to have been low sided with usual gravel rash. The radiator was ripped so I couldn’t start it, but as a Donor bike, the main parts were sweet.

Money exchanged, we put it in the van, drove home, stripped out the motor and took it over to see Dennis. Now Dennis Evans was the Brits answer to Burt Munro. Dennis had designed, built and raced his own engines and what he couldn’t do in his small workshop behind his house in Crowthorne, wasn’t worth doing. When I said “Right Dennis… British engine in a British frame…. what do you think ?” He knew I’d spoken of the similarities of the GPZ and Trumpy engine designs and so I left it with him for a few days.

He made up an additional upper rear engine mount to bolt new engine to old frame, so no modifications to the original frame were needed. It was a tight fit but fit it was. For this build I replaced the Kawasaki front end and rear wheel for the Triumph parts (to keep as much Triumph bits as possible). We went for moto X bars for a more relaxed sitting position.

When I emigrated to Australia I brought with me two suitcases of clothes/bits, my toolbox, a computer and the Harris in a crate.

The Harris was registered for the road here in 1986 after going through the rules and regs.  Import license, Import plates, Engineer reports, Blue slip weighbridge etc. etc…. But soon after the ignition failed on the way to work, my daughter was born and so the Harris sat at the back of the shed in pieces.” 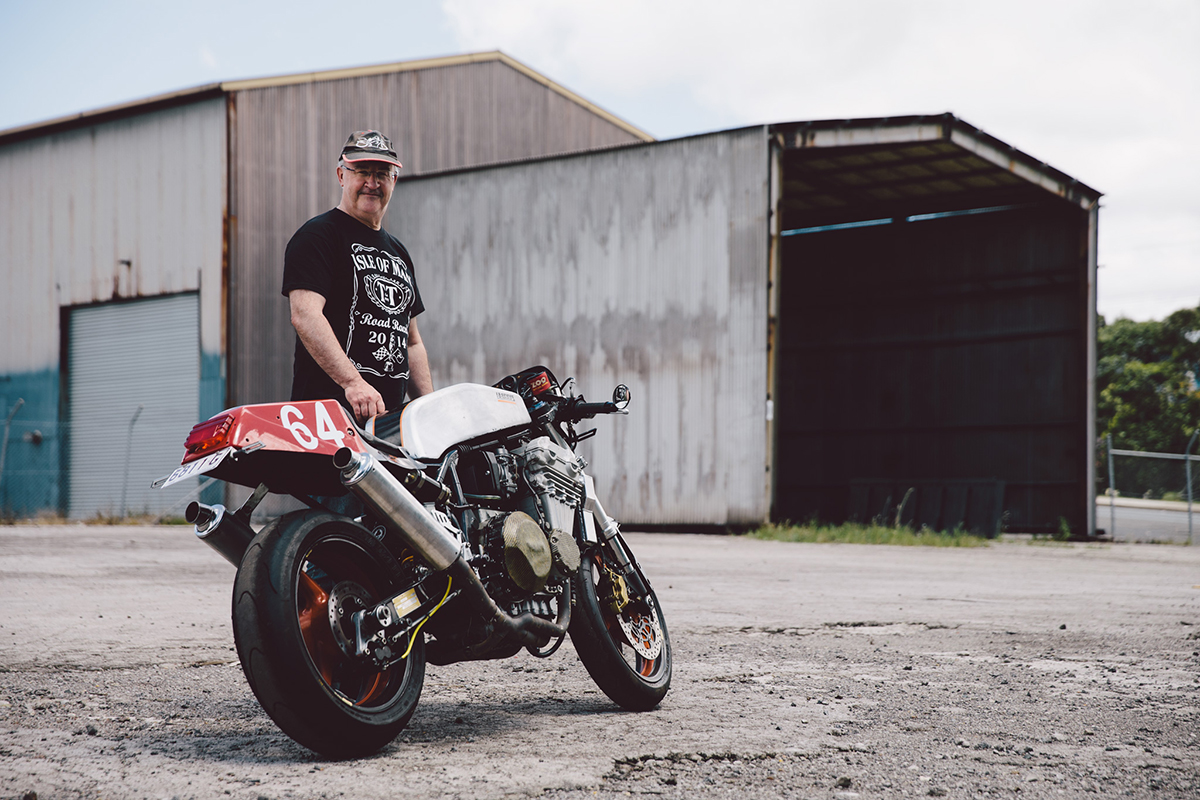 “I was over a mate’s place (he was moving his custom fabrication business to a new location) and the chats over a beer turned to the Harris.  He came up with an idea of “why don’t you rebuild it for the Barry Sheene Festival of Speed race in 4 months time?” We mulled over if it was possible, and what needed to be done.

Frame, tank, swing arm were all good. The engine once we fixed the ignition problem was good to go as well, so let’s do it!

The original WP shock was 30 years old and not worth repairing, so to fit a newer Penske unit (I had taken off one of my race bikes) we needed to machine up a new rod end that made the new shock the same length as the older WP unit, have the same rod diameter and width and fit a smaller diameter Ohlin’s spring. With these modifications the Penske was a straight replacement for the WP unit.

We managed to get the bike finished and raced it at the Barry Sheene event (with literally a day to spare). Most of the changes done were to bring the spec up as much as we could, but still complying with the rules for racing in the Pre Modern race class.” 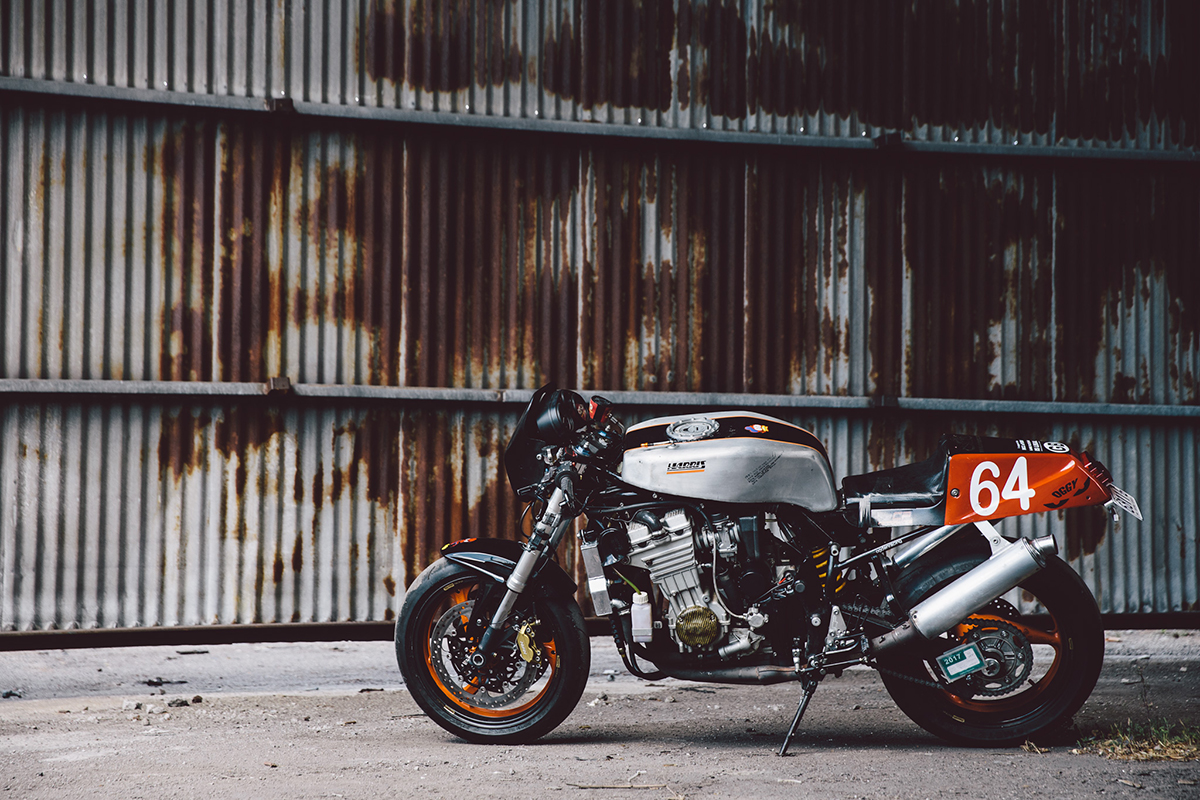 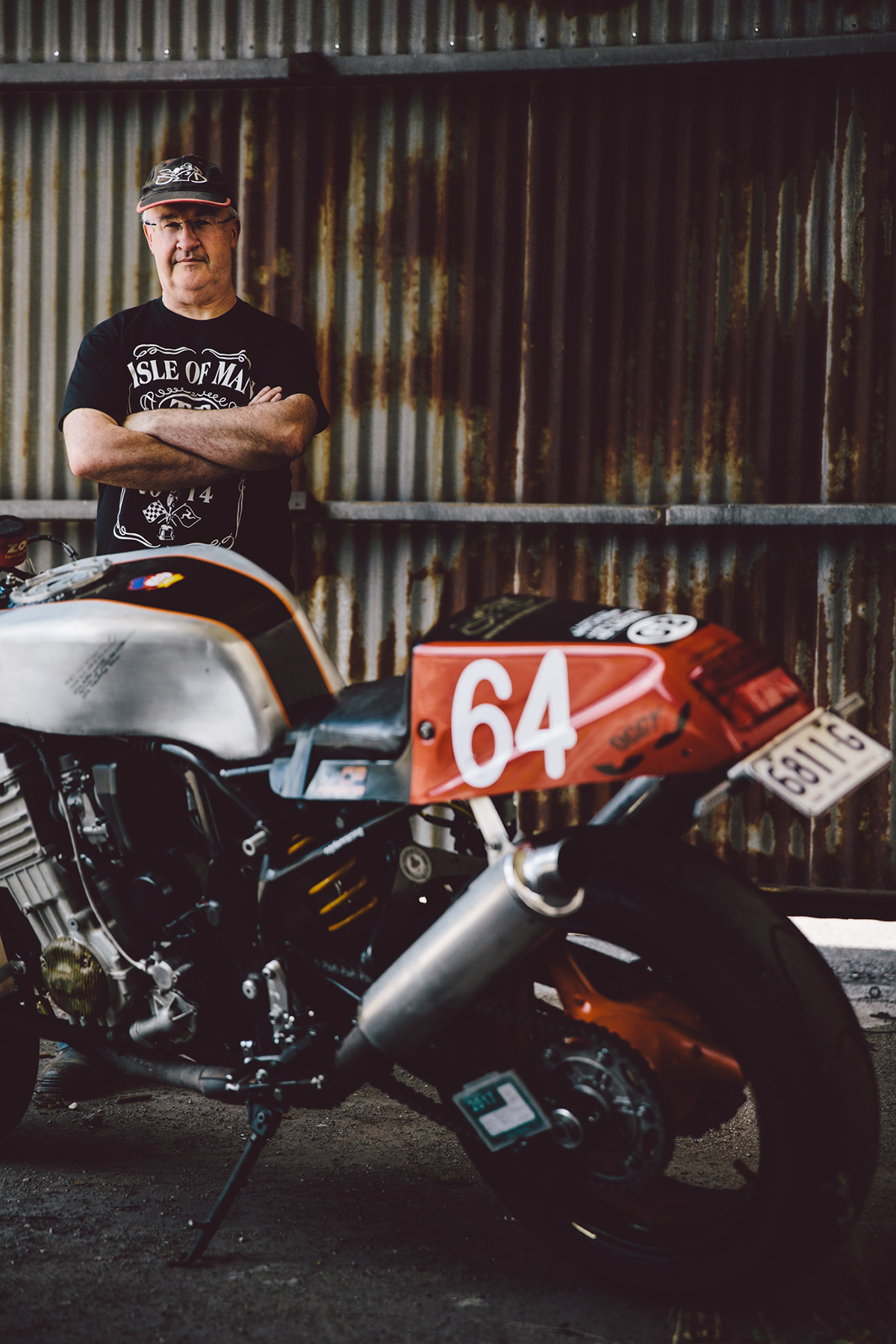 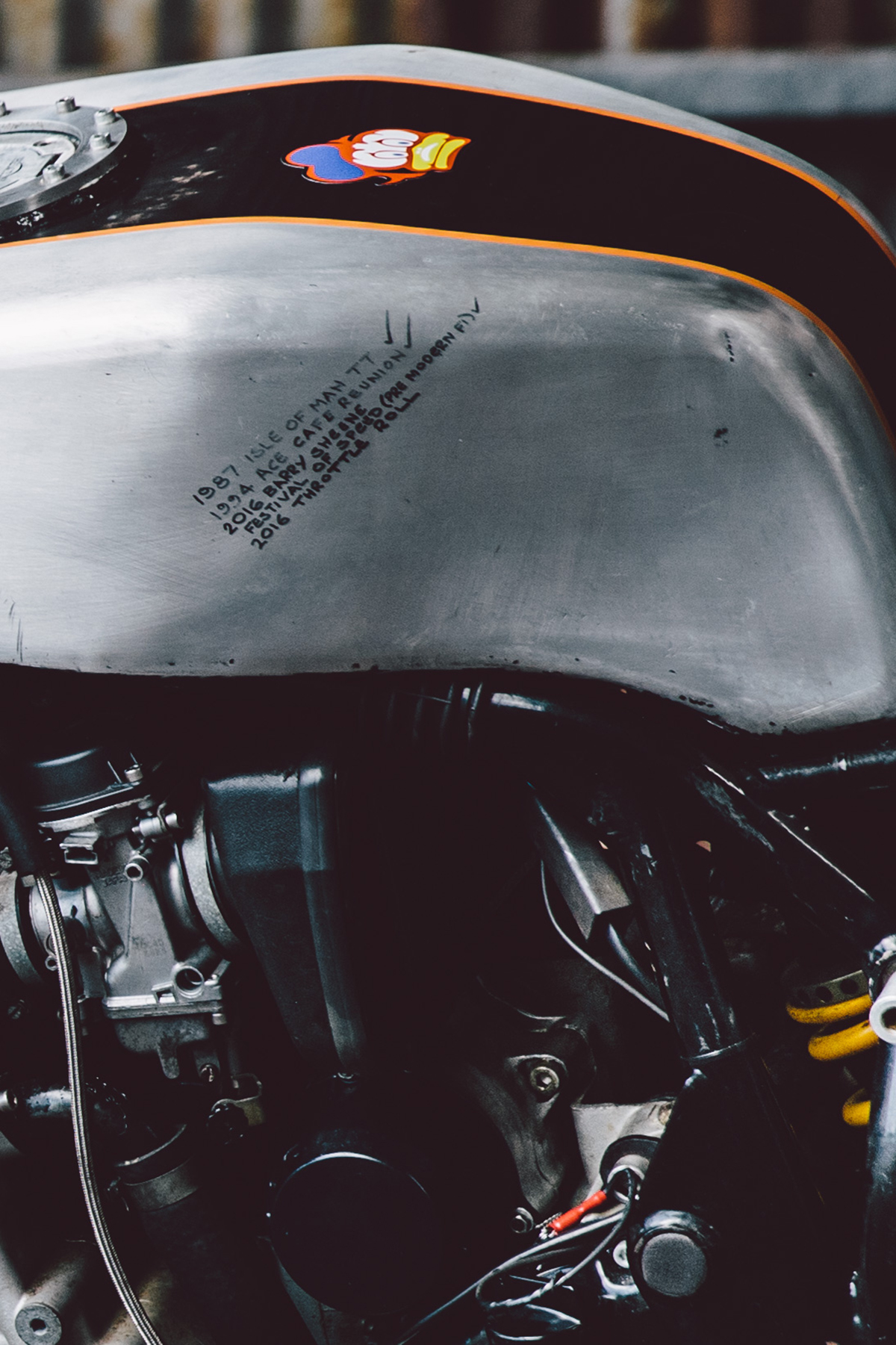 This bike had a rich history behind, both from a technical perspective as well as a personal one. Phil was 21 when he first built this bike, living in England. As he’ll proudly tell you, it was his weapon of choice back then – built to suit look and feel that he wanted. “Back then, it was my faily ride, my only bike. I went to work on it, down the pub on it and it took me on my trips away. It was just a bike as everyone used bikes back then.

Now after the rebuild for the Barry Sheene Festival of Speed, it’s a bike I’ll try and race at the event every year from now on. It’s now road registered, so I’ll use it for weekend jollies down to the local pie shop via a few backroads to a few pubs.” 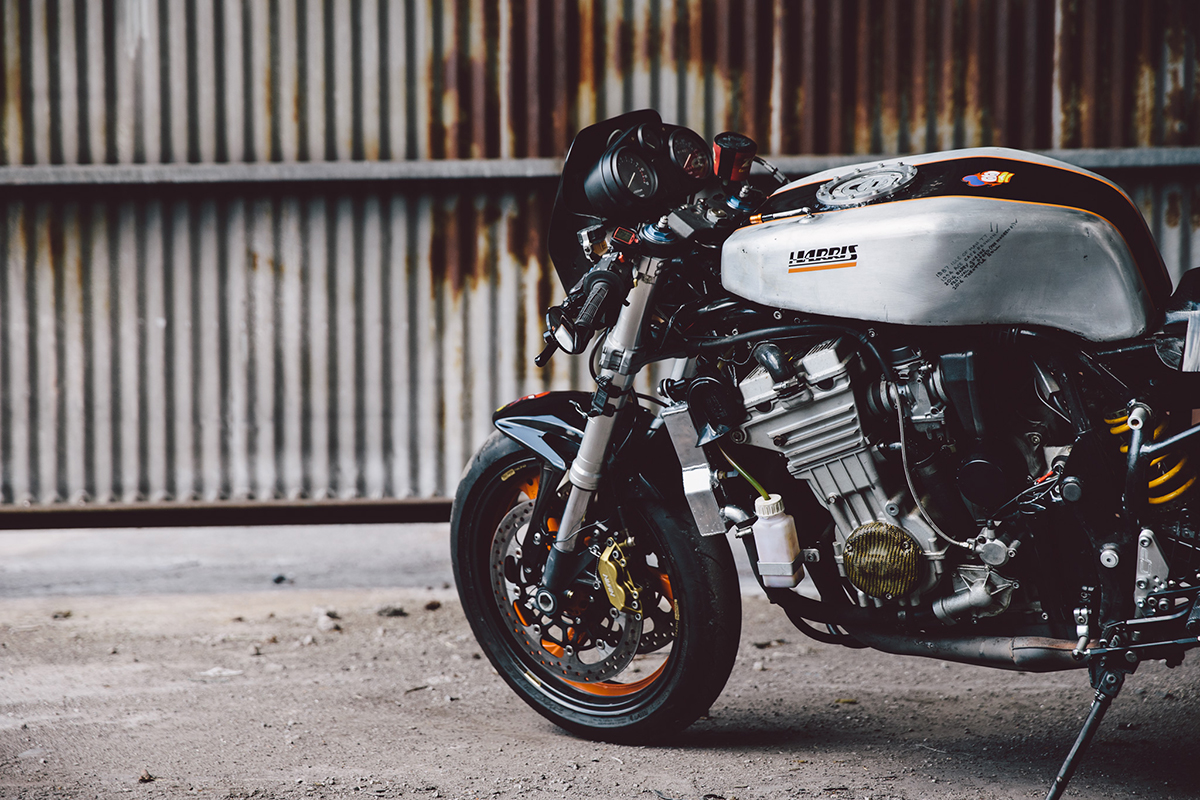 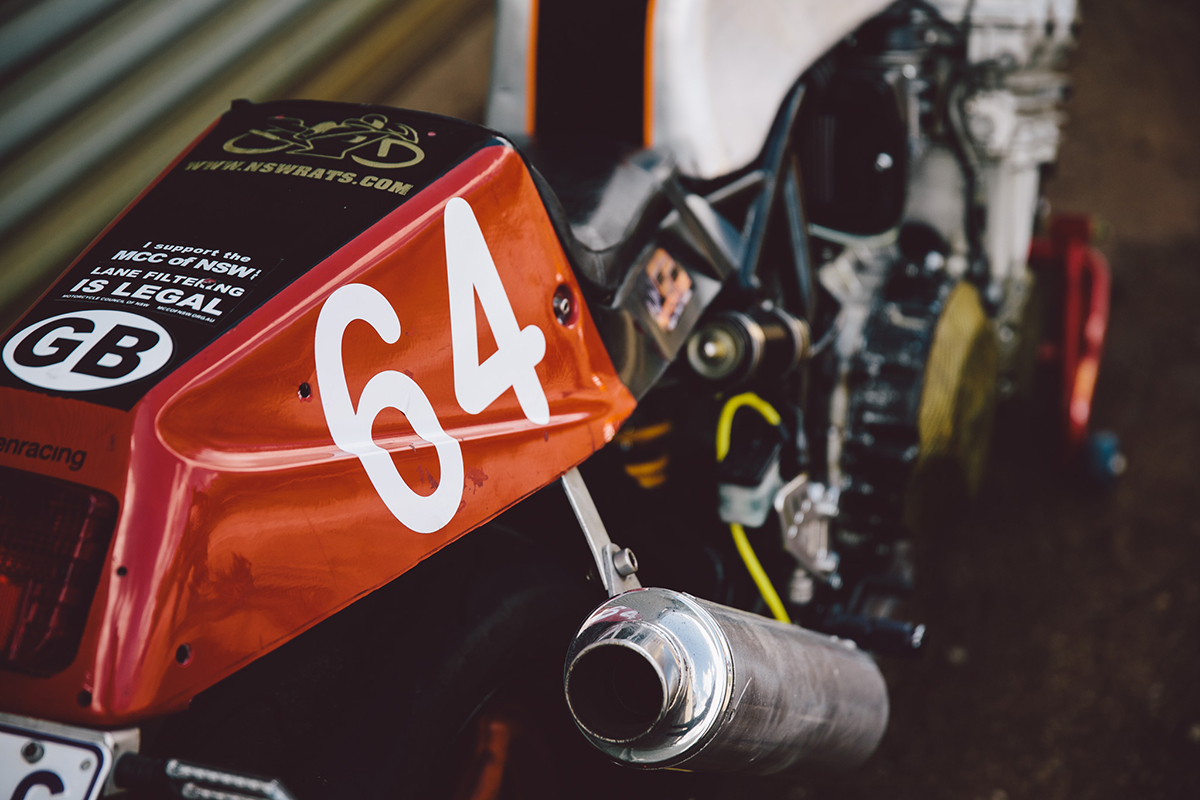