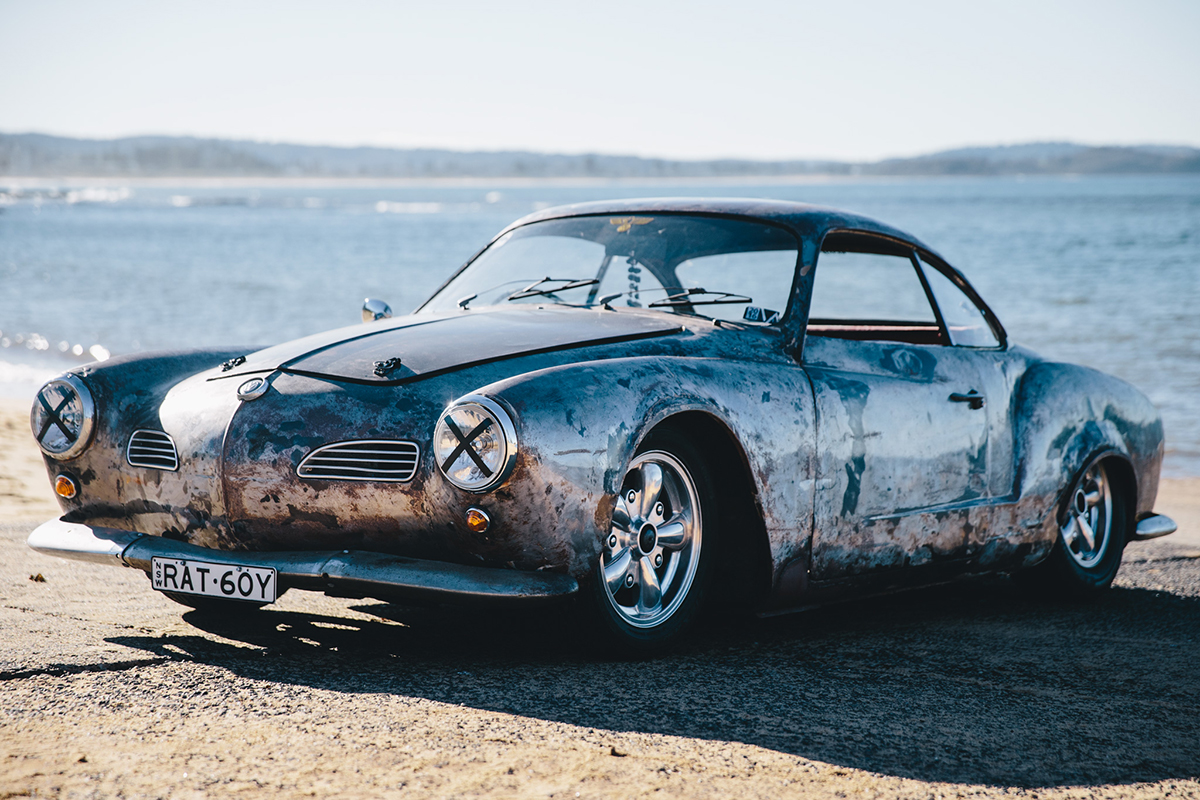 “What colour are you going to paint it?” is a question that follows Brad’s 1960 Volkswagen Karmann Ghia wherever it goes. There are no plans of paint for this ratty German Sports Car however, despite one local grey nomad asking it we recently dredged this car out of the sea. 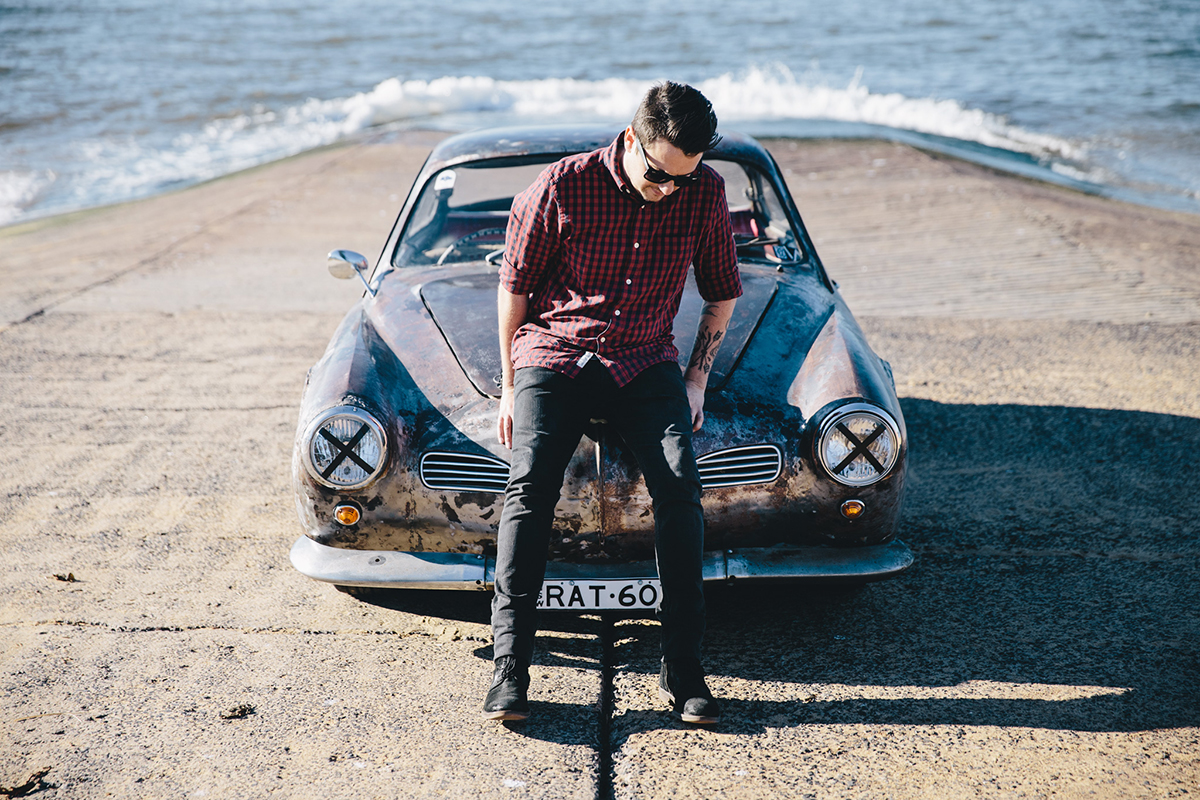 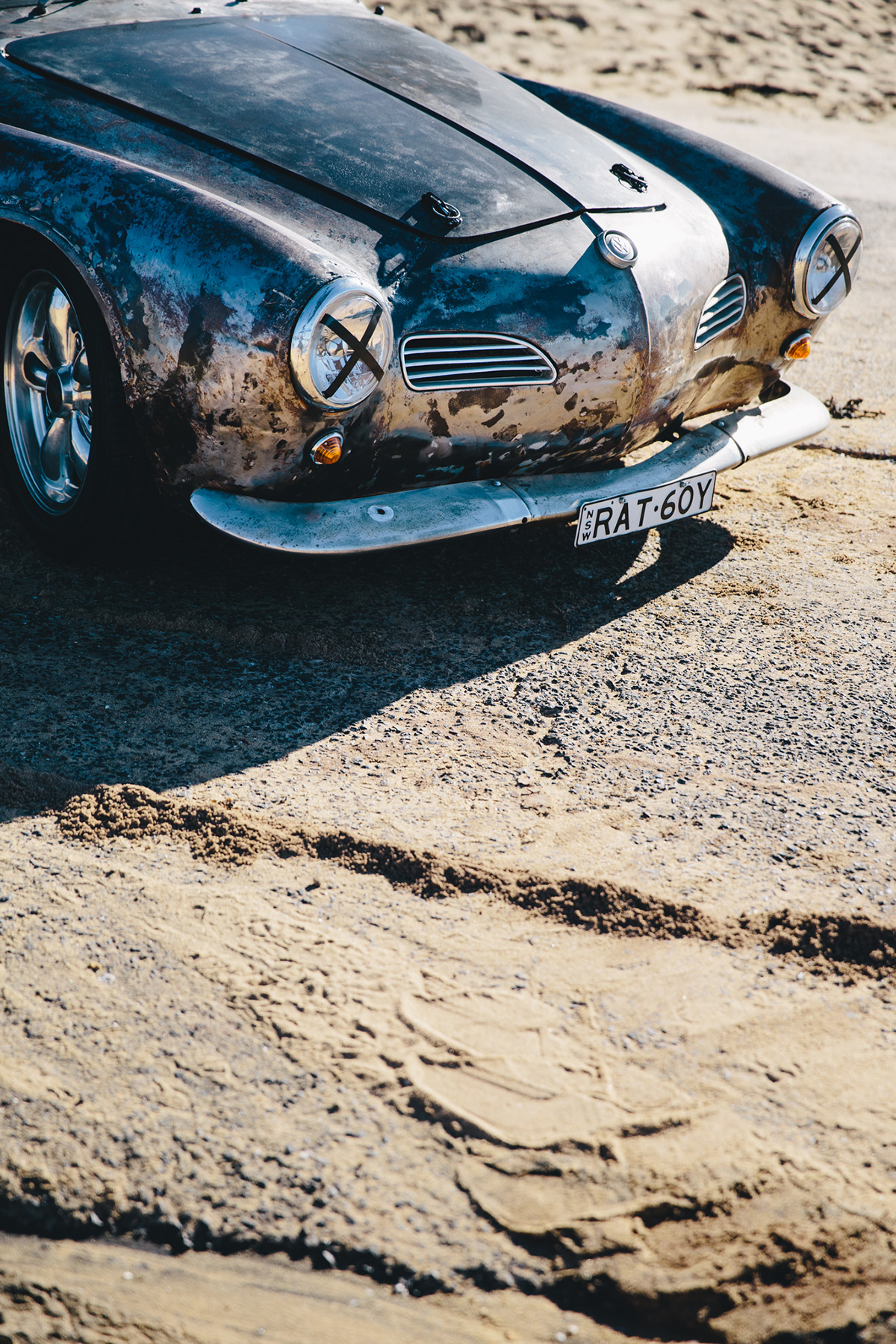 Growing up with VW Fanatics for parents, it was only a matter of time for Brad to catch onto the obsession. The crown jewel for this passion would be to one day own a Karmann Ghia, a sports car that first entered production in 1955 combining the chassis and mechanicals of the Type 1 Beetle with the styling of Luigi Segre of the Italian carrozzeria Ghia. Initially, Brad dreamt of having himself an immaculate late ‘50’s or early ‘60’s Ghia, in dark maroon with a white roof, polished Porsche rims and the body slammed down. This would not be his destiny, as the universe had a much more ratty style machine in mind for Brad. 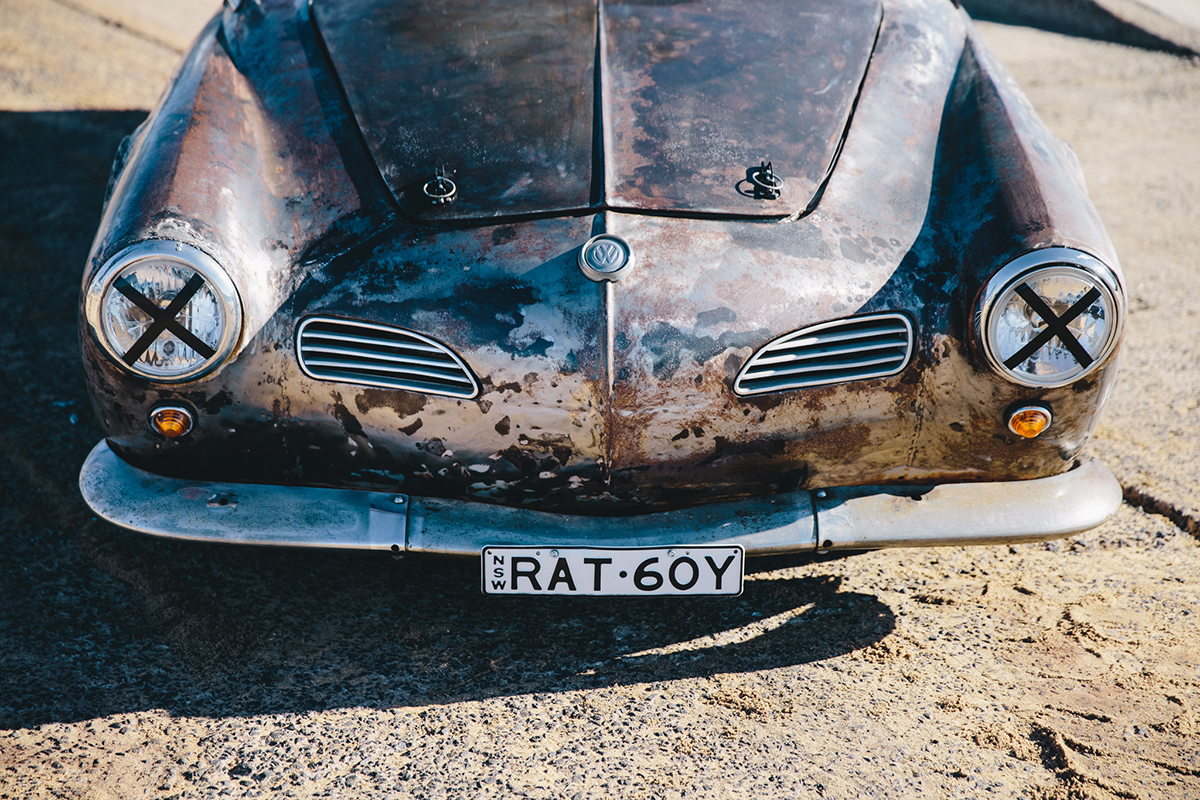 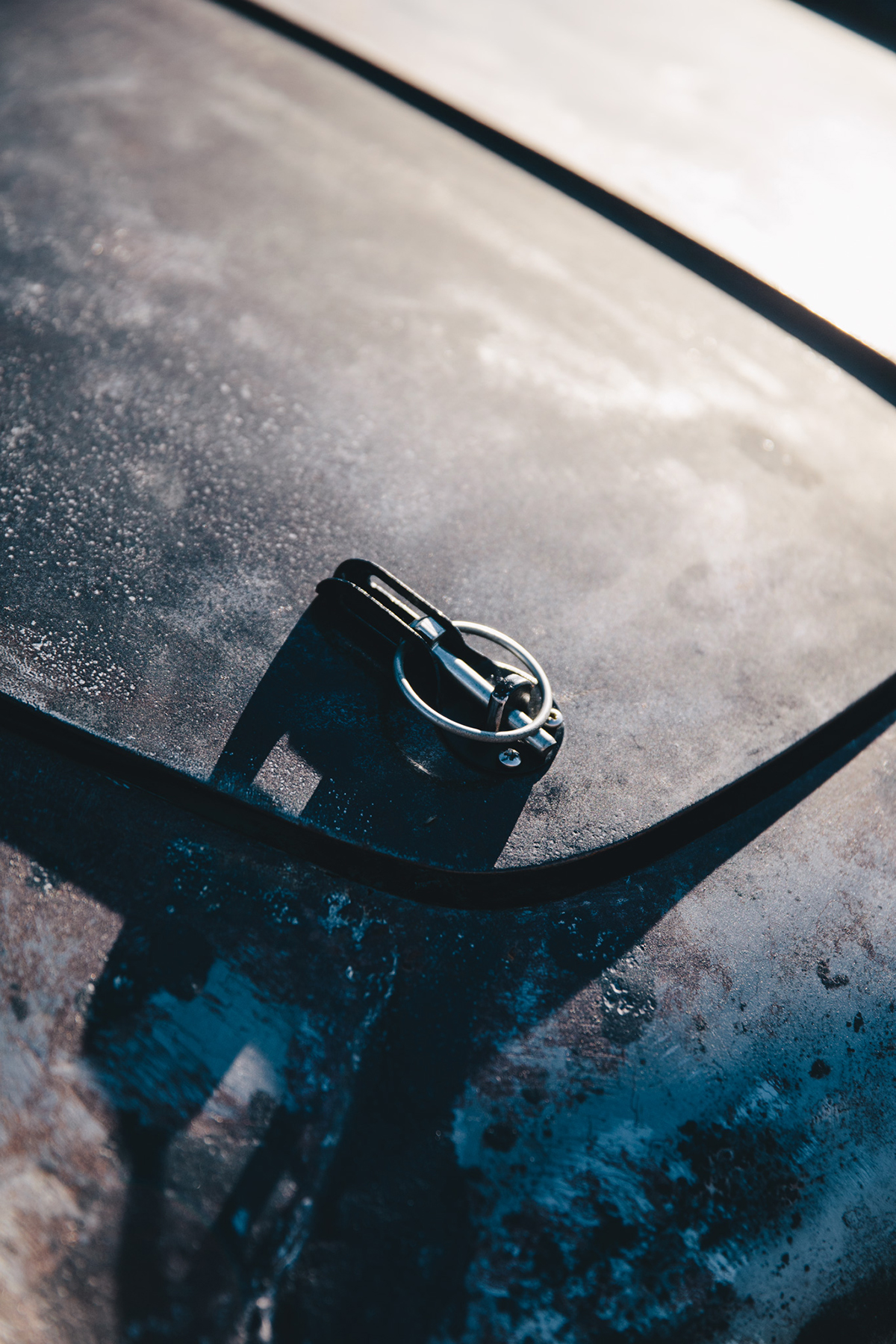 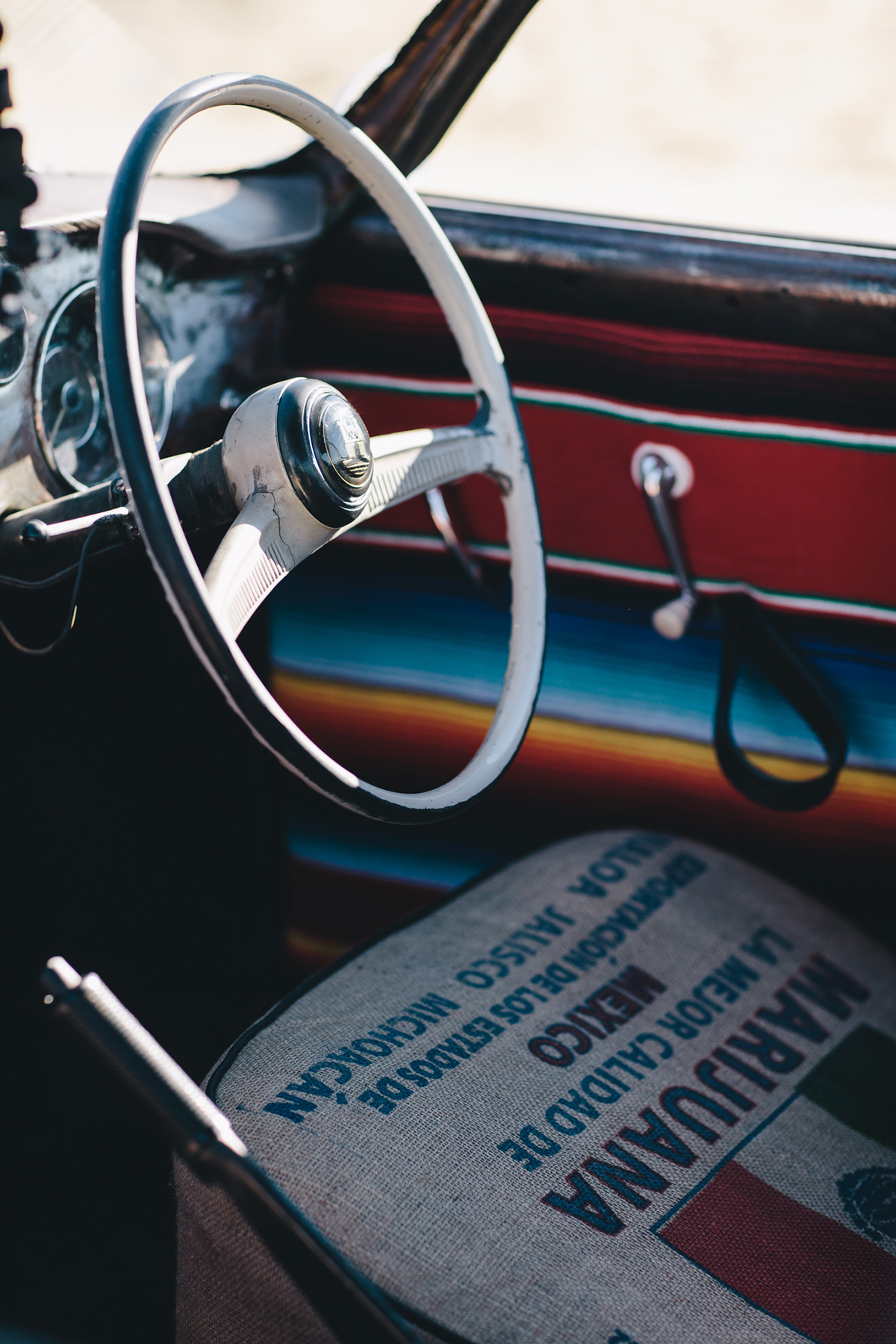 After finishing up at a previous job and getting all of his holiday pay out, Brad was happily sitting on a bit of coin and had just completed his Honda CB100 build. This meant that he had two valuable things that most people can never balance – time and money. With naughty thoughts of buying an early 1960’s Triumph that he’d turn into a bobber swimming about in his head, Brad decided to have a browse through some VW forums in case any cars on there would spark his interest. And there the sparks would fly, and so all thoughts of the Triumph being thrown out the window and the sudden prospect of buying 4 wheels instead of 2 was in full swing. 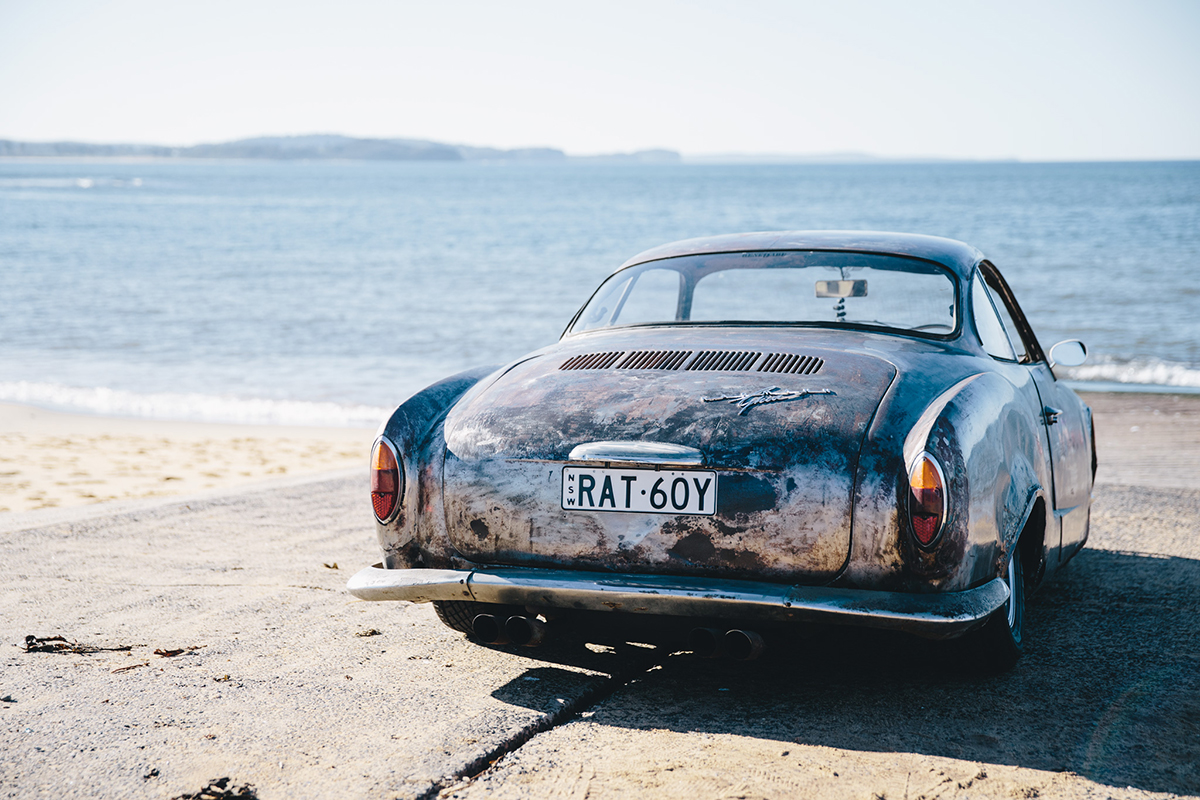 “A guy had just listed this one for sale. It was so far removed from what my dream Ghia was, but the price was good and I could see potential.

After a week of back and forth on emails, getting pictures of the state it was in and negotiating the price, I paid my money and it was mine! Yes; I bought it based on some photos from a guy on the Internet, without getting it checked out in the flesh. My challenge however would be shipping it up from Melbourne to Sydney – trying to find someone to truck a car so low that was in it’s condition was not easy, but eventually I got it sorted. I had to wait nearly 2 months from when I purchased it until I actually got the car”. 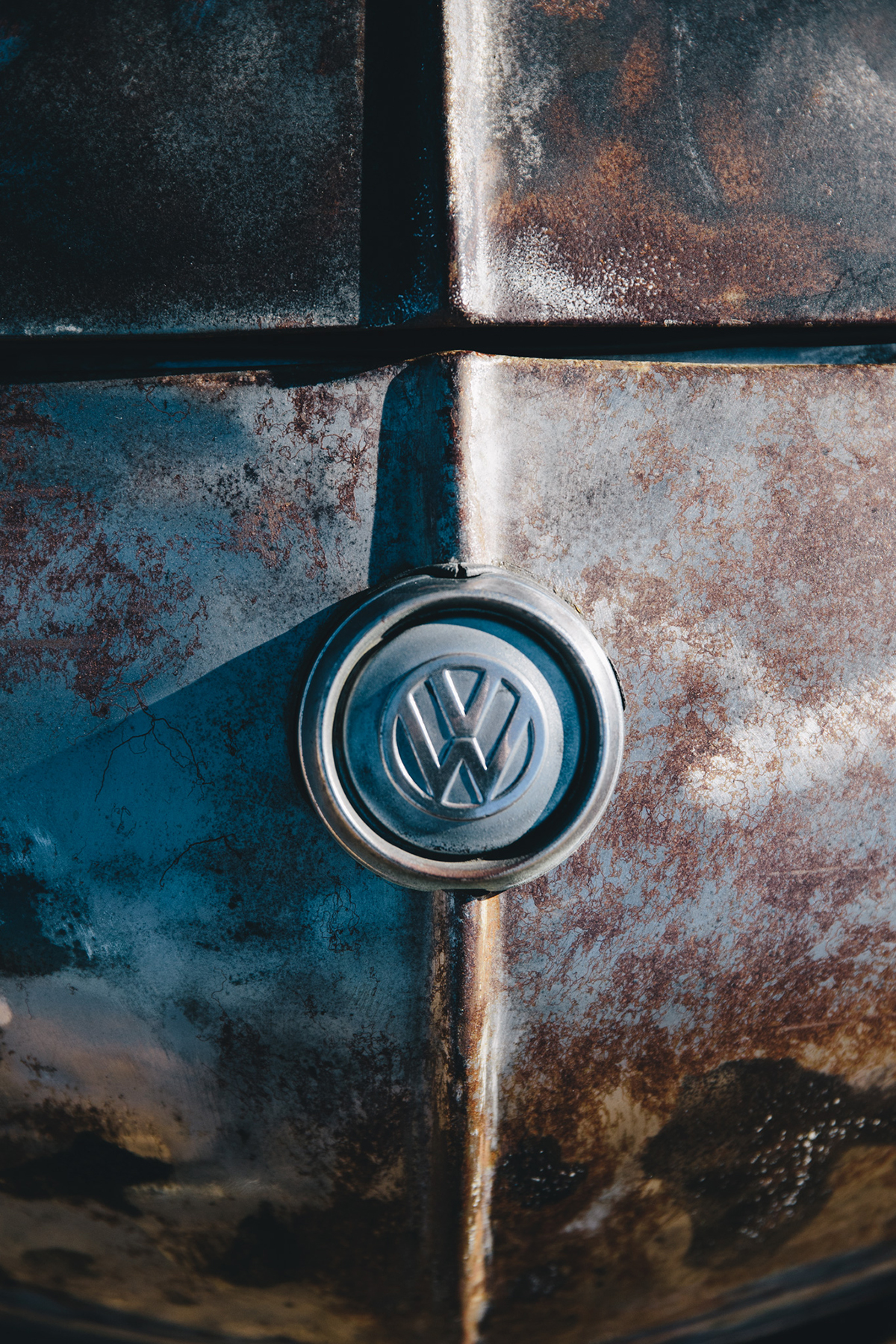 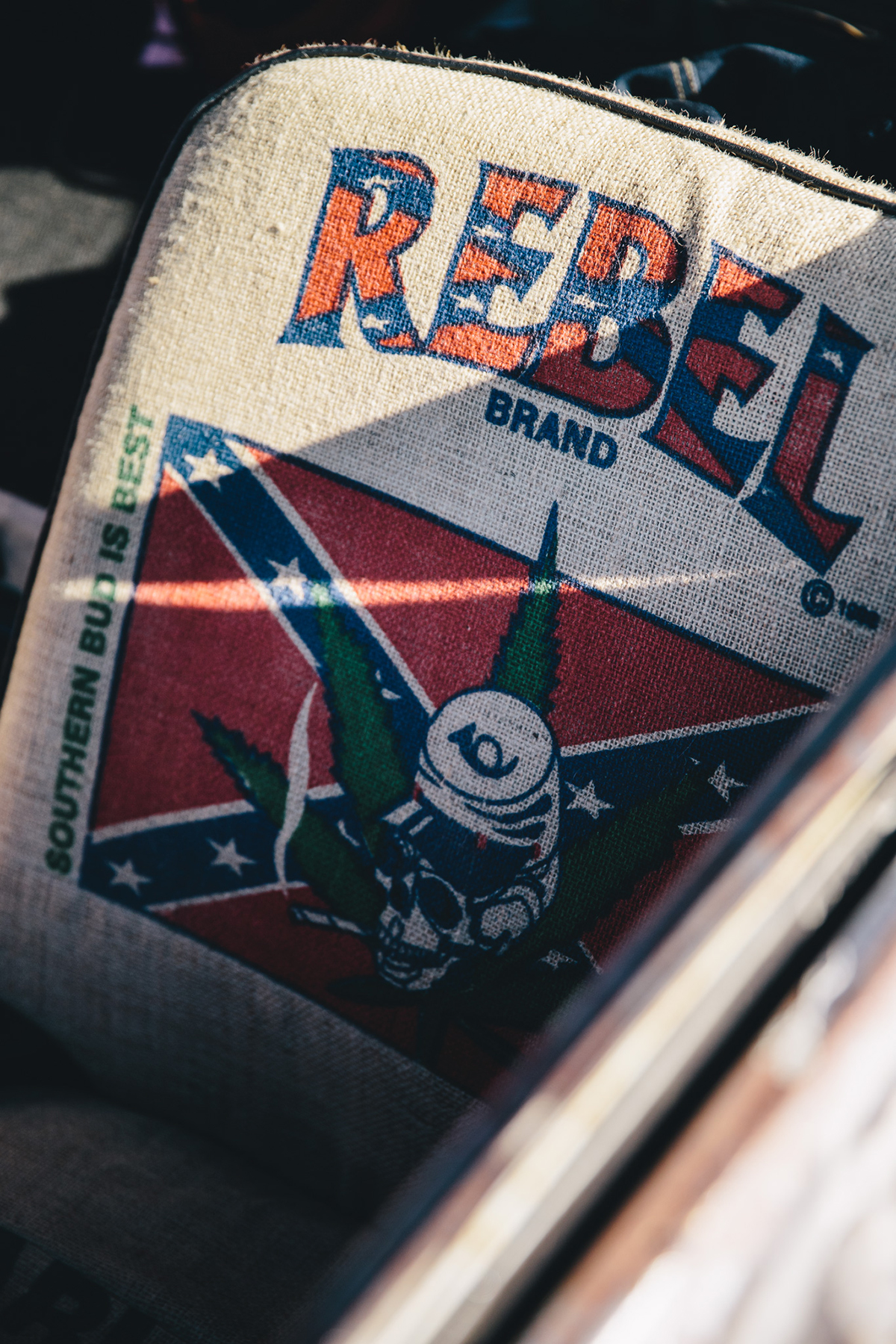 Each Karmann Ghia was handbuild by German coachbuilder Karmann, resulting in every car being somewhat unique with different panels and finishes. This is reflective in Brad’s own Rat Boy, where the original welded seams and lead wiping can be seen that was first done in factory. It took a bit of time after the cars arrival for Brad to figure out exactly where to start on a project like this, as he began to discover what he did and didn’t have. “The car didn’t have brakes, most of the original lines had perished, it had a leaking master cylinder, no fluid reservoir (the beer bottle it had wasn’t cutting it), leaking wheel cylinders and worn out shoes.” 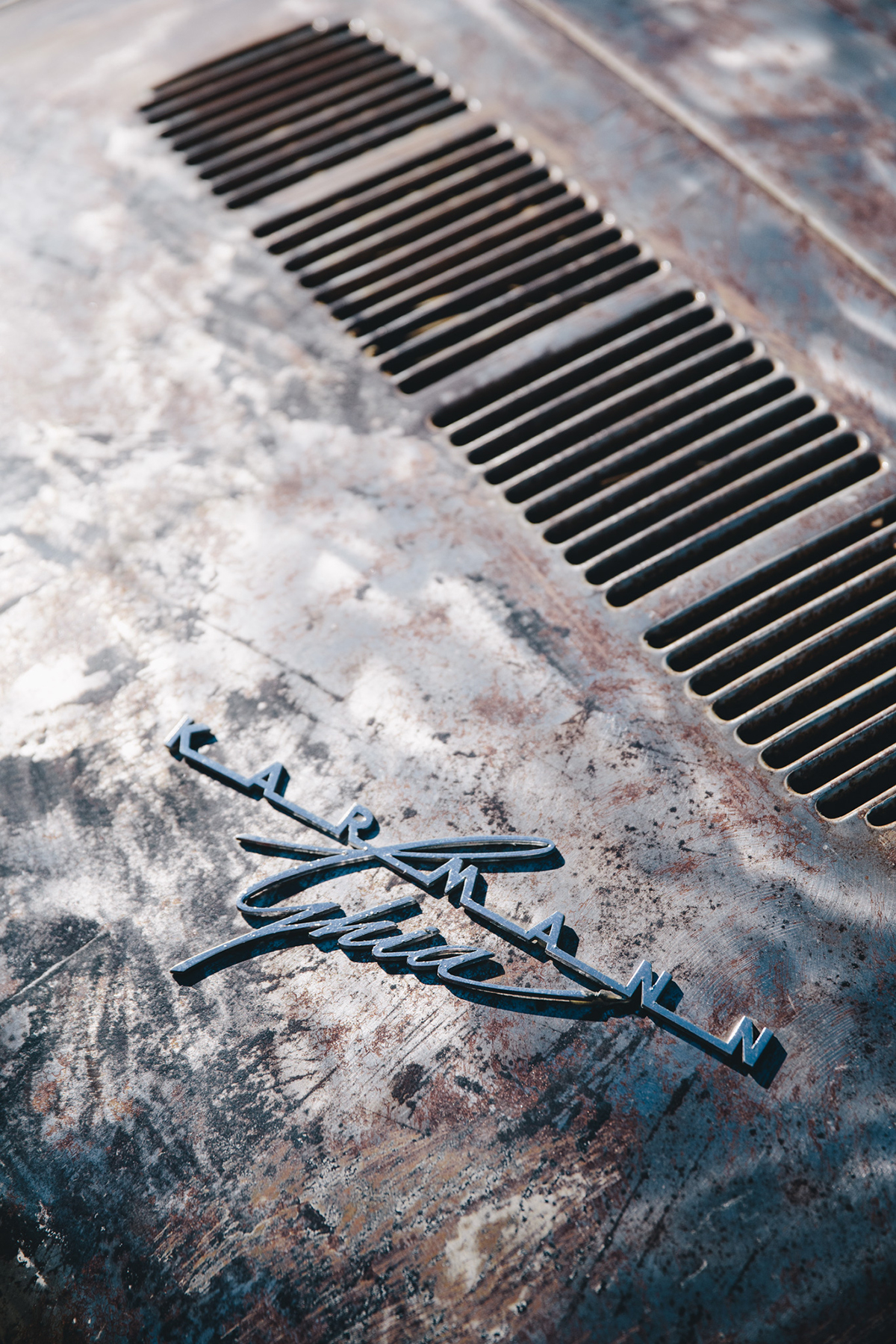 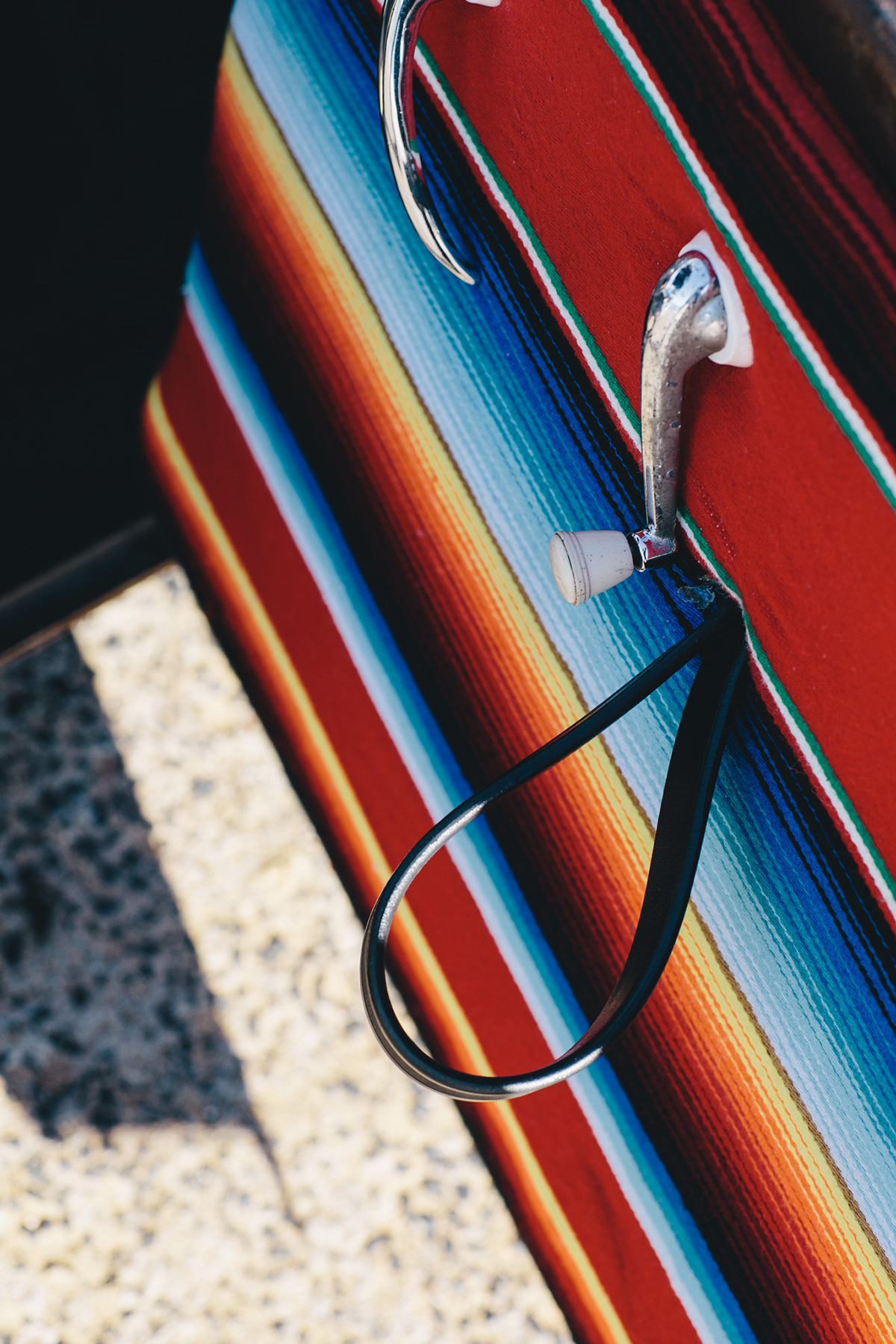 “Next up came the wiring, with so few of these cars being sold in Australia buying a new loom was near impossible, so I had to get one from the USA and chop it up to work with the right hand drive layout. Having never really done electrical work I spent hours reading up and studying wiring diagrams. Eventually I thought I knew what I was doing and gave it a crack. Surprisingly it all went reasonably smoothly and only had one electrical fire, which was the result of getting an auto electrician to wire up the wipers for me… I should have done it myself. I still remember the first time I got some lights to work – I was so stoked! It made me realise I could actually do this and get the car back on the road.” 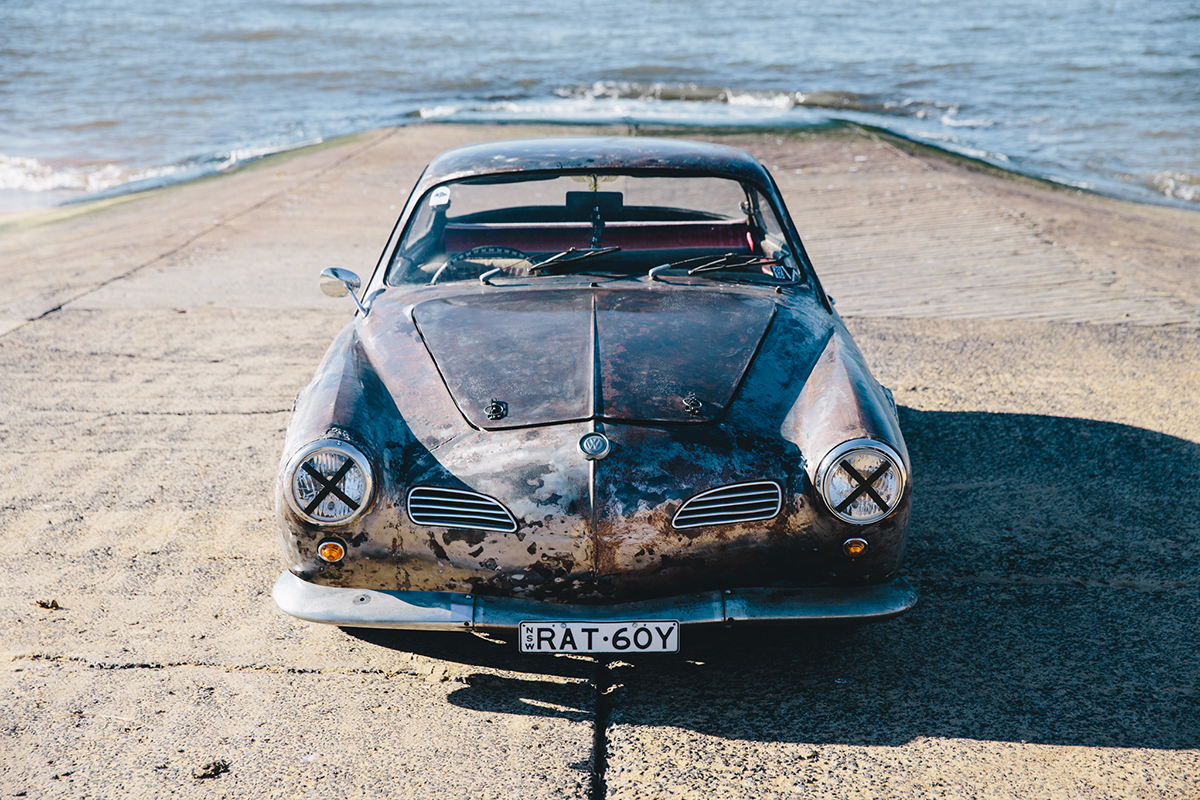 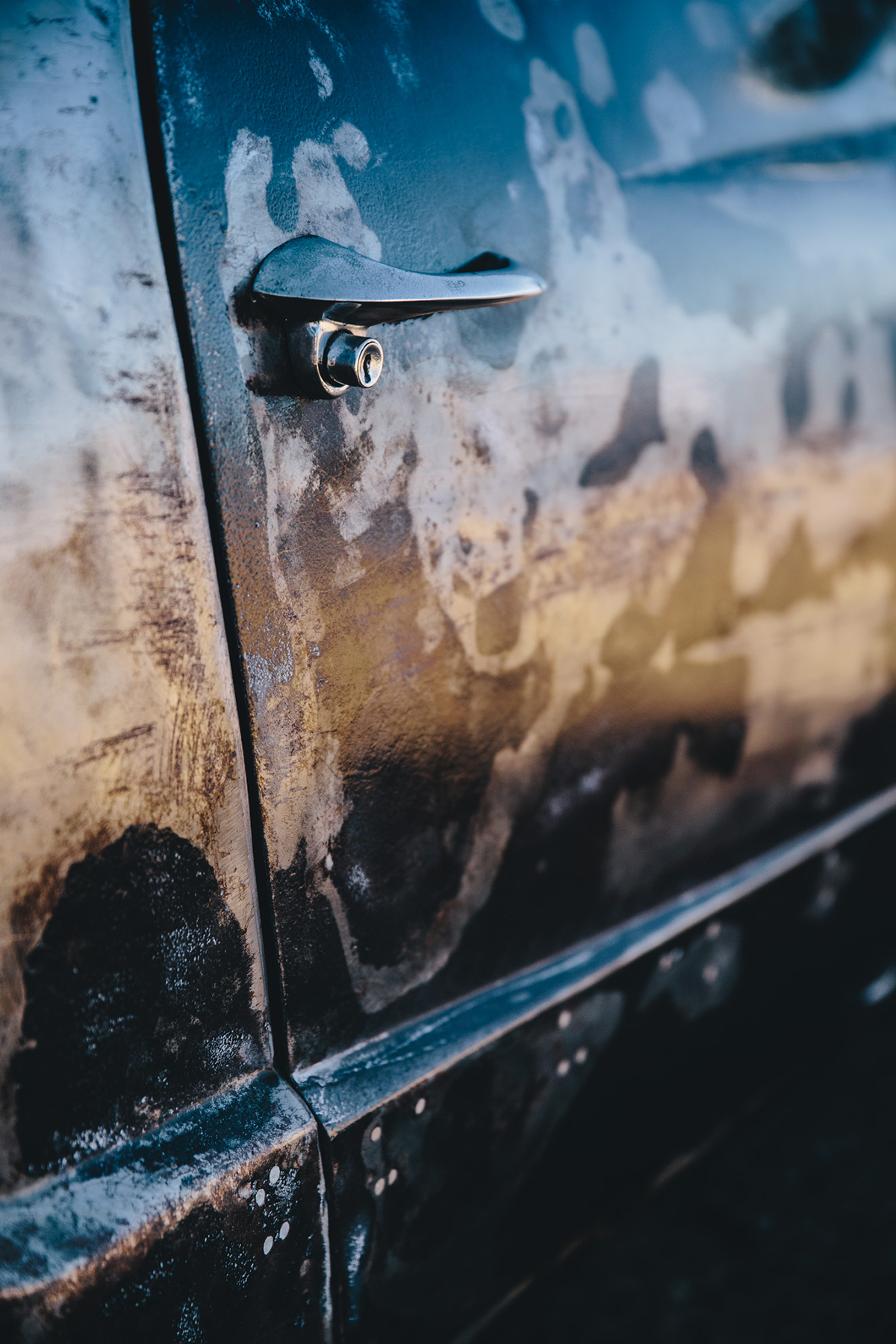 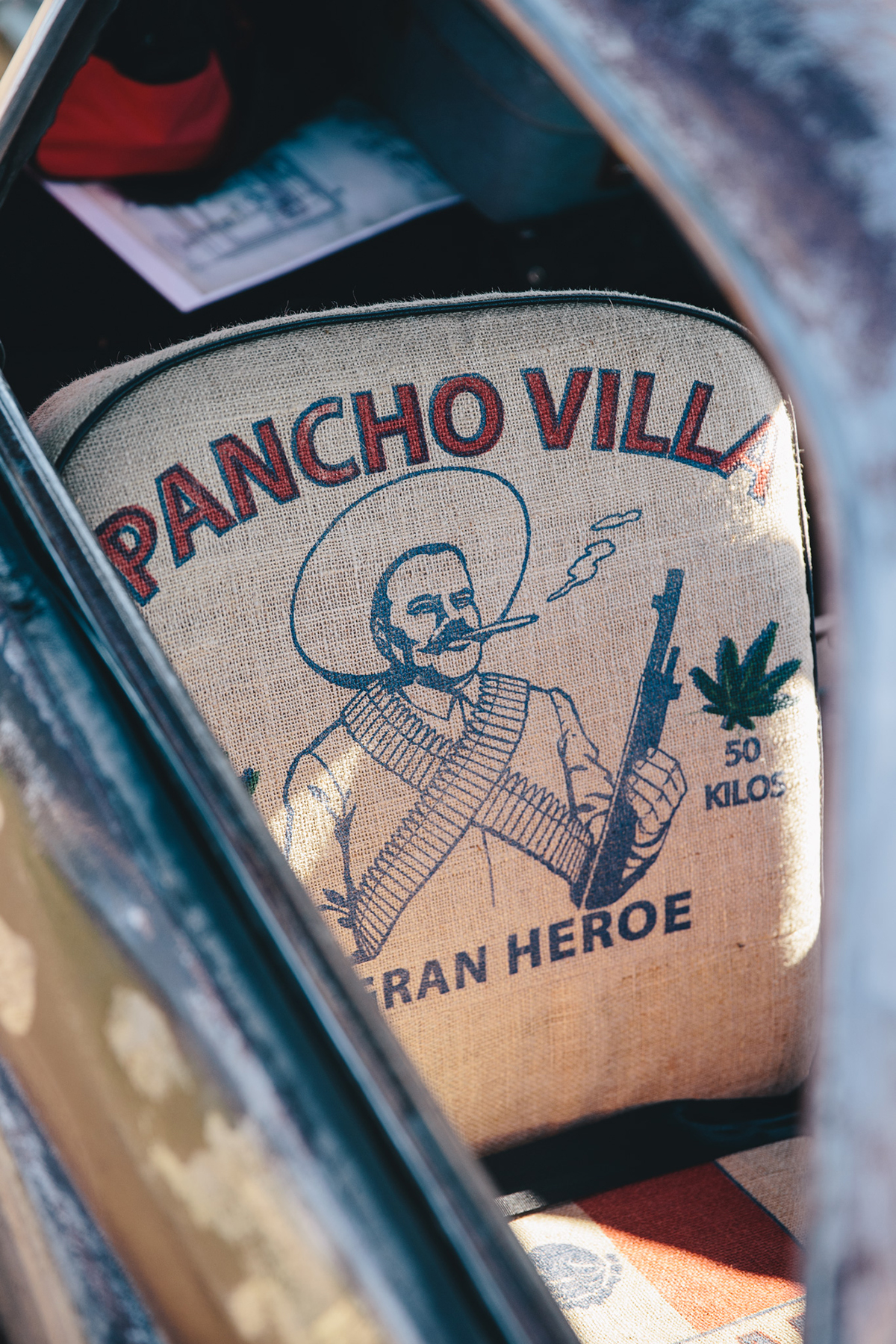 The motivation and confidence in this build was rolling, and soon the wheels would be as well. There would still be bodywork to complete however, which would be no walk in the park. “The hardest part of this car build was doing body work and welding. This was something I had never done before. I had to call in some help from some experts here. Kyle from Rene9ade made me some panels to fill in holes that had been cut in the boot, which I went for a steam punk look and riveted those in. The replacement metal work may not be true to the original car, but it works and is as close to original with out going through the pain of a body off resto. The other bodywork was then cutting out the old sills and rolling sheet metal into the correct shape to match the original guards. This was my first attempt at panel shaping by hand and I’m pretty happy with how it all turned out. Other bits that had to be welded in were the dashboard, headlight buckets and filling in a few other areas that were just tacked together.

After all metal work was down, it was time to add some clear coat to these areas so would fit in with the rest of the car – but only after wetting the panels and giving them some time to get some surface rust going.” 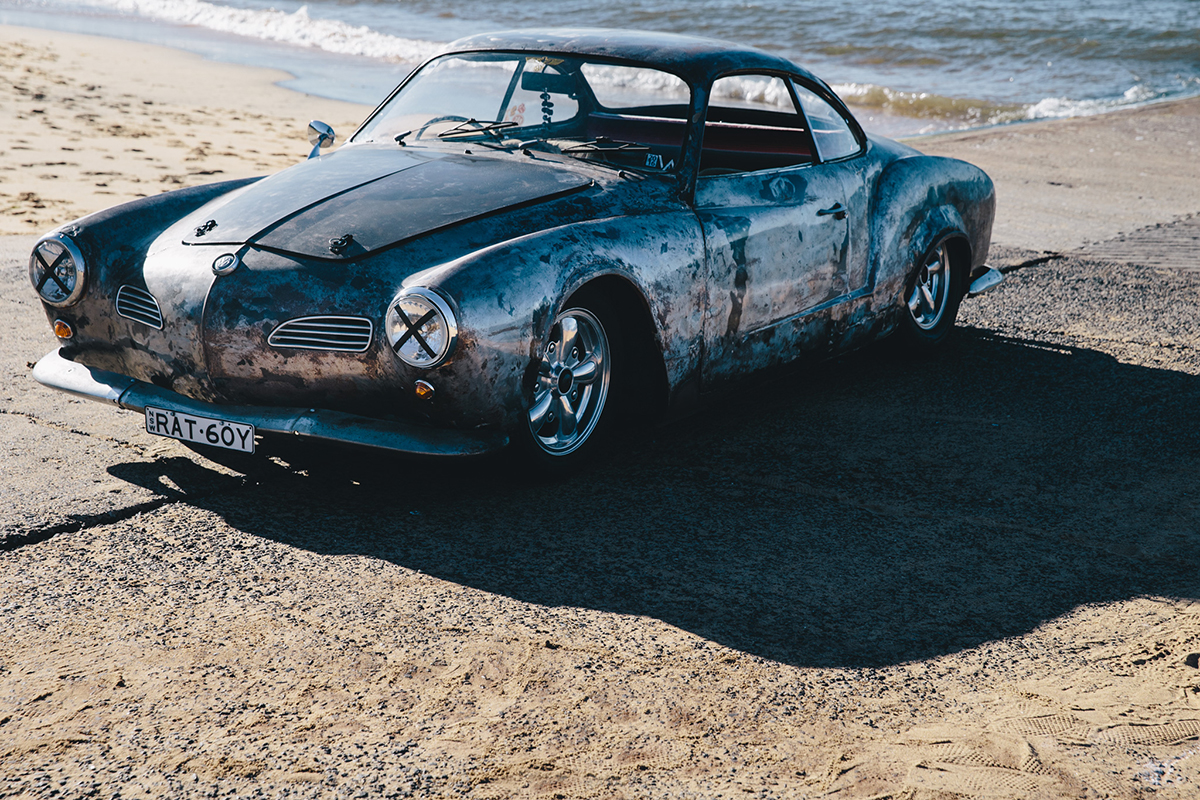 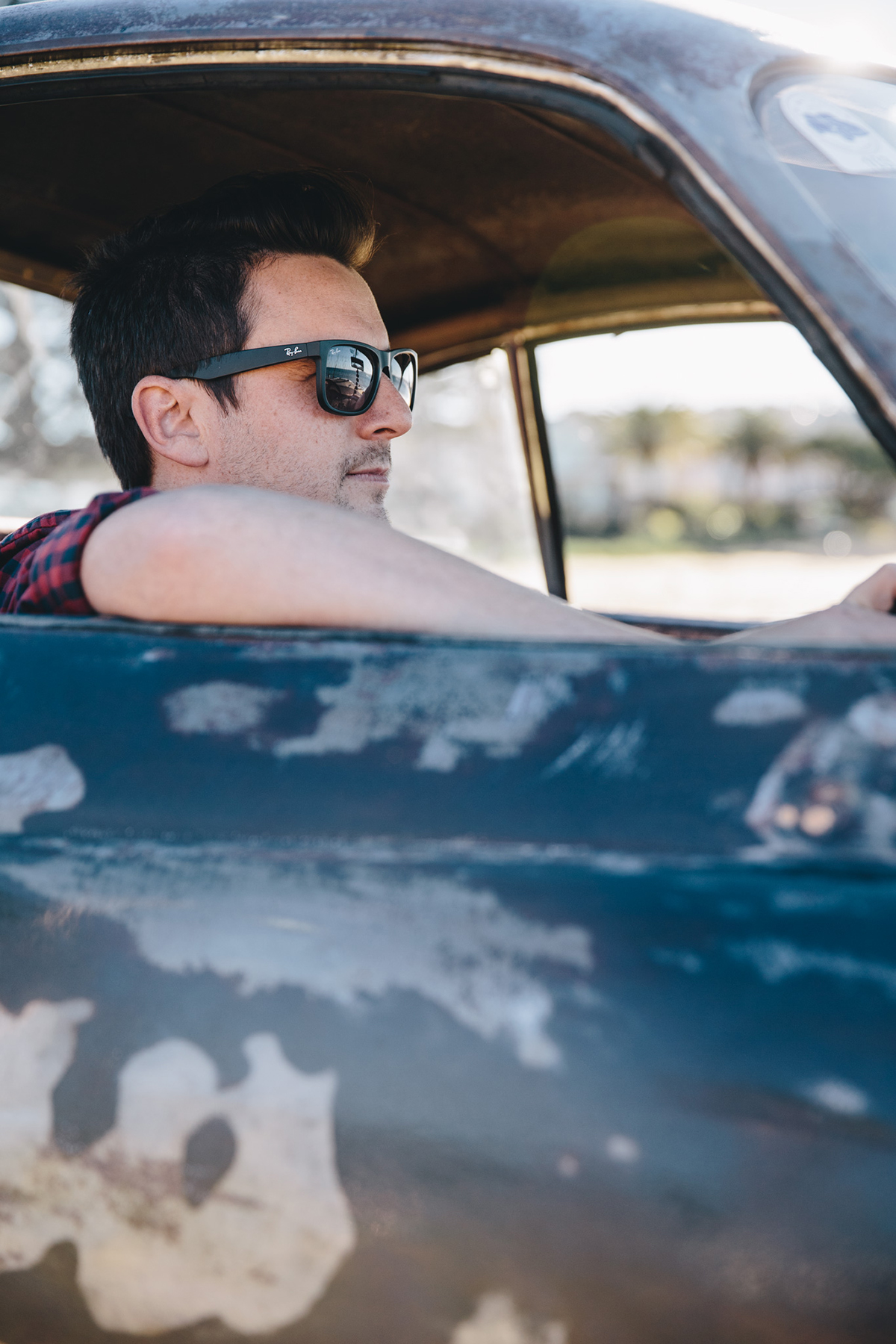 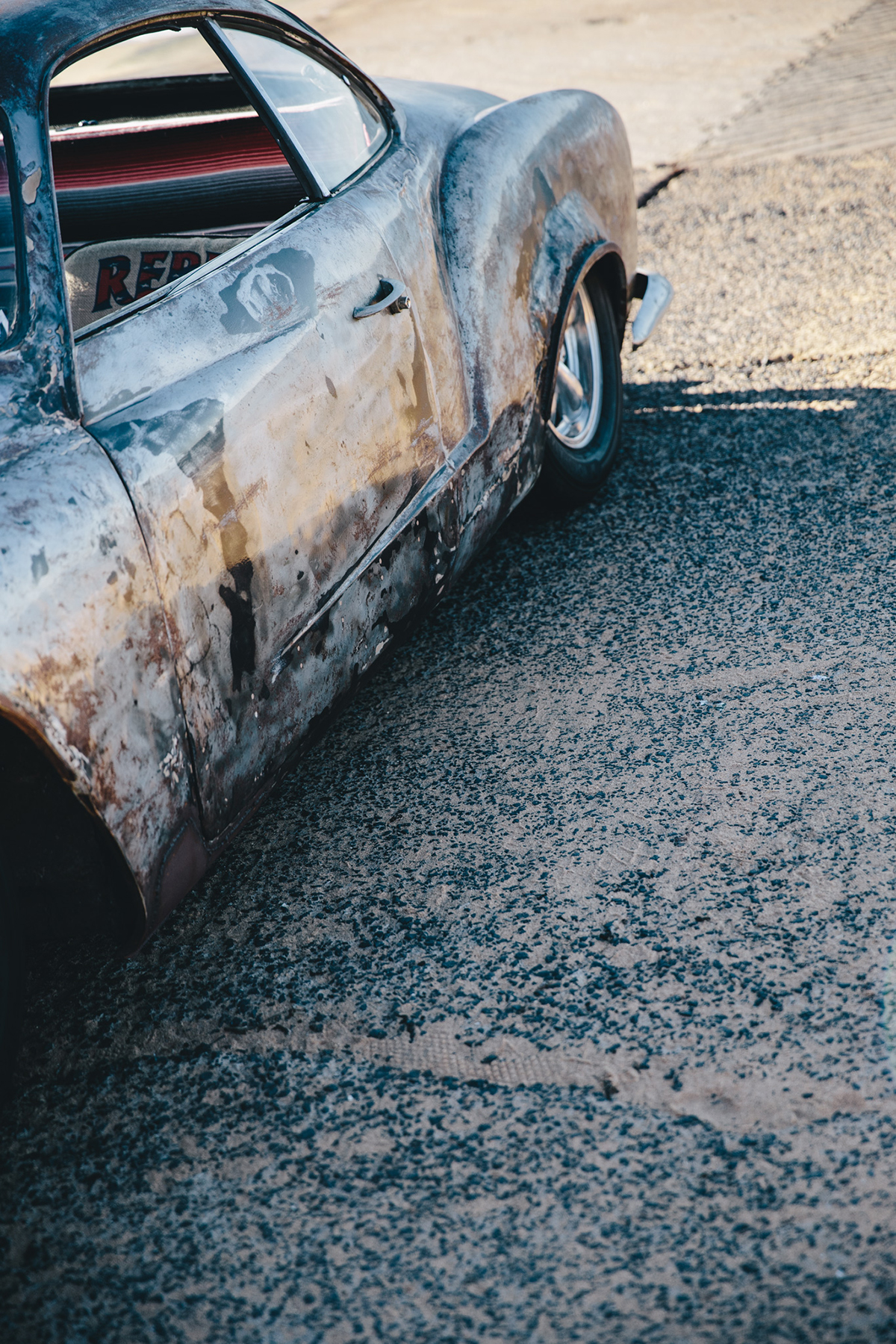 The last major part for ‘Rat Boy’ would be the interior, which would receive an alternate approach instead of traditional much like the exterior of the car. “The only part of the interior that is close to original is a replacement carpet kit, which is like an oversized jigsaw puzzle to put in, its over 20pcs and came with no instructions or diagrams. So time was spent laying it out on my living room floor to get it right before gluing it into the car. The seats were the only parts in the interior I didn’t complete myself. After finding the hessian sacks, I realised that these needed to be done properly and not hacked up by me, so the seats went off to Walls in Brookvale who did a killer job in fixing up the old frames and trimming them with the weed bags. For the door trim I made up some templates, which I them sealed, padded, and trimmed with the Mexican blankets. I have always been a huge fan of all things Mexican, especially anything to do with Dia de Muertos, so that just naturally fitted in with the look of the car. Luckily I had a heap of Mexican stuff in my house, like the rug for the door trim and the skull for the gear knob.” 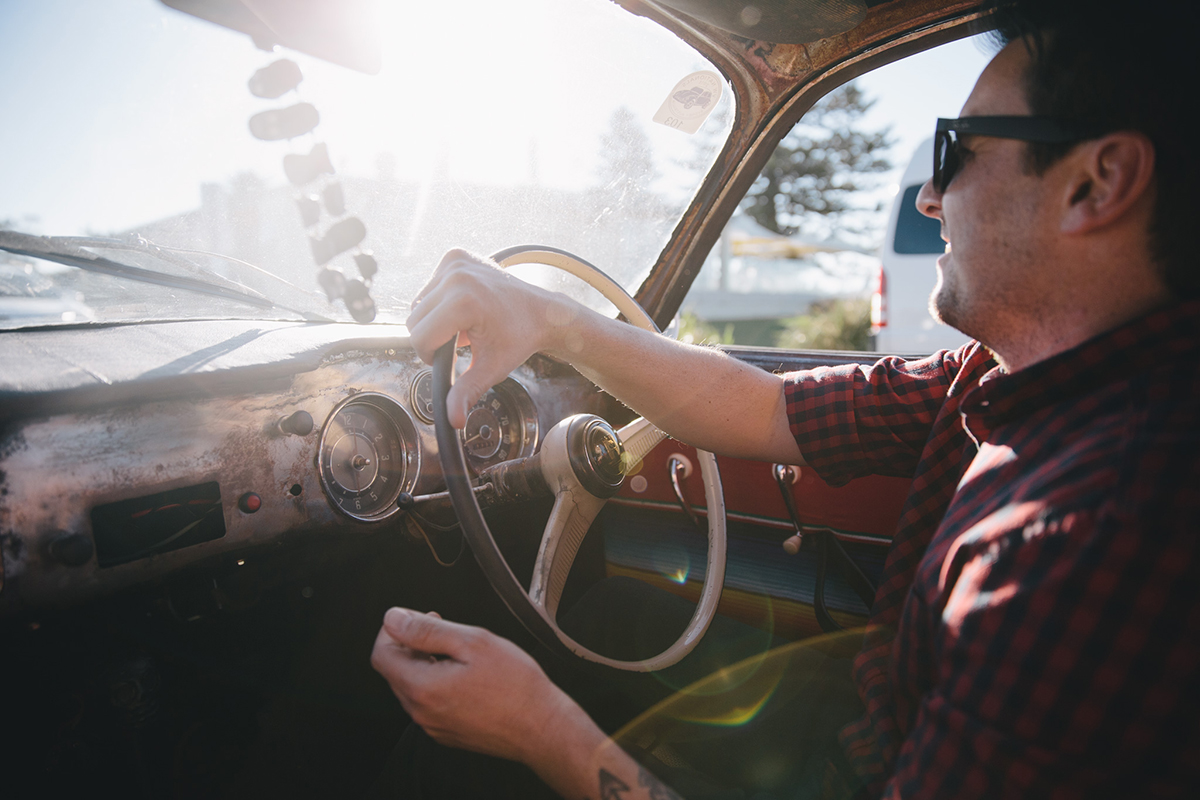 ‘Rat Boy’ would only be completed the night before it’s first show, and hadn’t even been driven on the road since at least the late ‘70’s. This would be a gutsy move considering the car had to be driven from Brookevale to Fairfield, so Brad took it out for it’s first thrash about in years along his local roads to make sure it all went (relatively) smoothly. “ I couldn’t wipe the smile off my face! I couldn’t believe I had actually got it completed and back on the road. The next day I drove it out to the show and was amazed with how well it went. The car happily cruised down the freeway sitting on 100, and only occasionally trying to bounce into the next lane as it hit any bumps.” 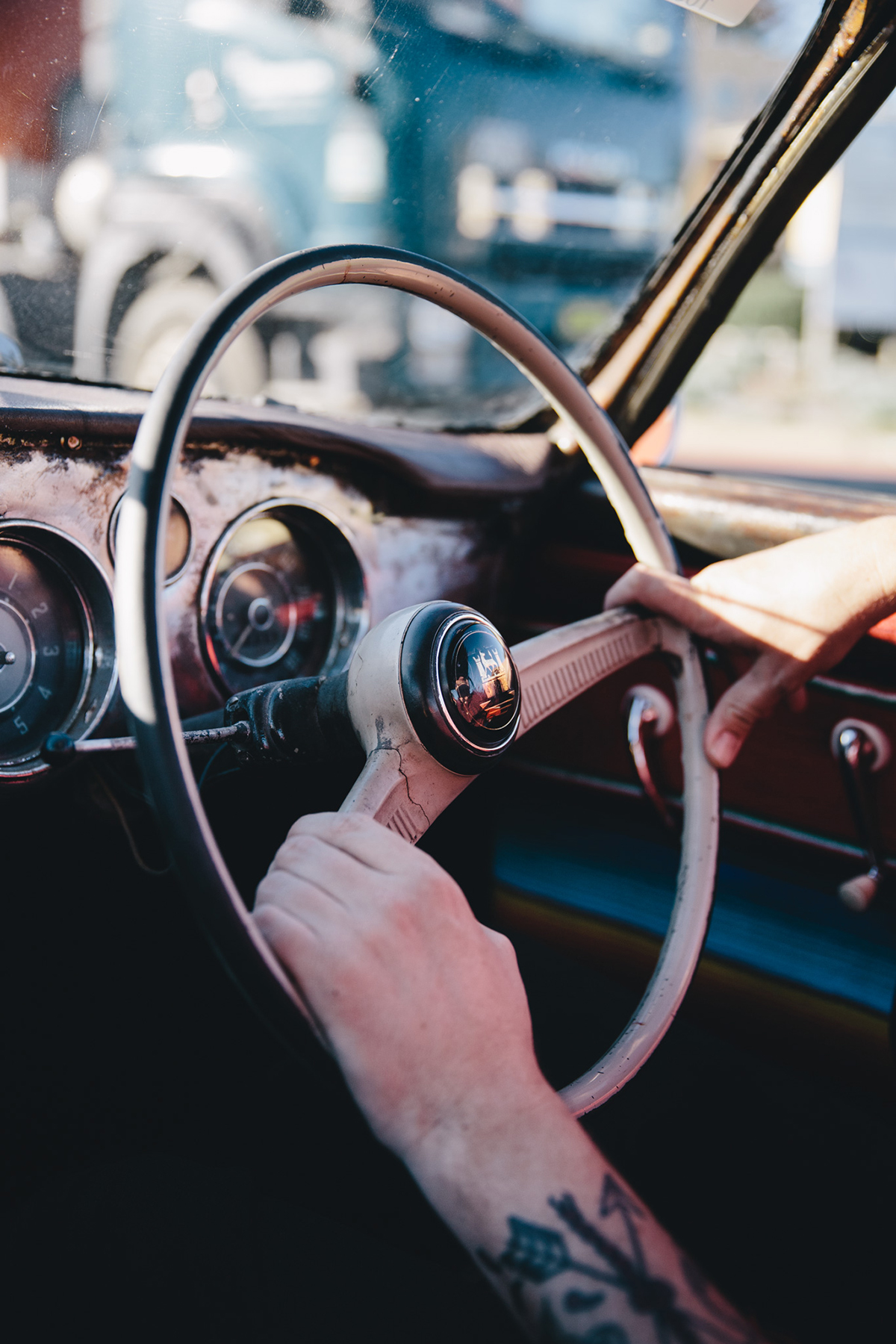 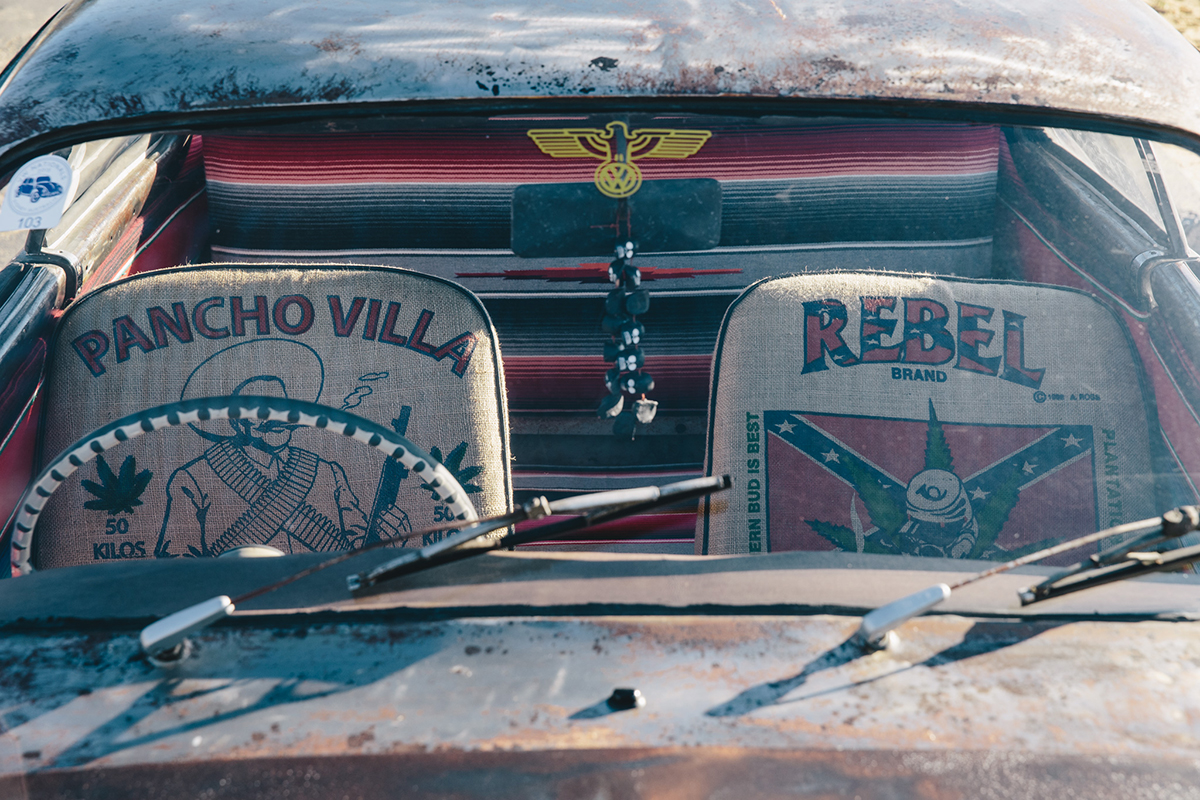 Truthfully, Brad admits that the car is still far from being truly complete as there are always things to do next. “Next on my list is somse proper seals s I can take it out for a drive when it’s raining. I’m also looking to build a new motor for it, which I am going to have a crack at myself. The current 1600cc goes ok (though originally these came with a 1200cc) but I want to put some more go into the car. Given it only weights about 800kg it doesn’t take much to get them going well, so I’ll be looking to build at least an 1800cc and potentially supercharged.

It’ll be my first attempt at building a motor, but I figure that if I’ve gotten this far I should be able to do that too.” 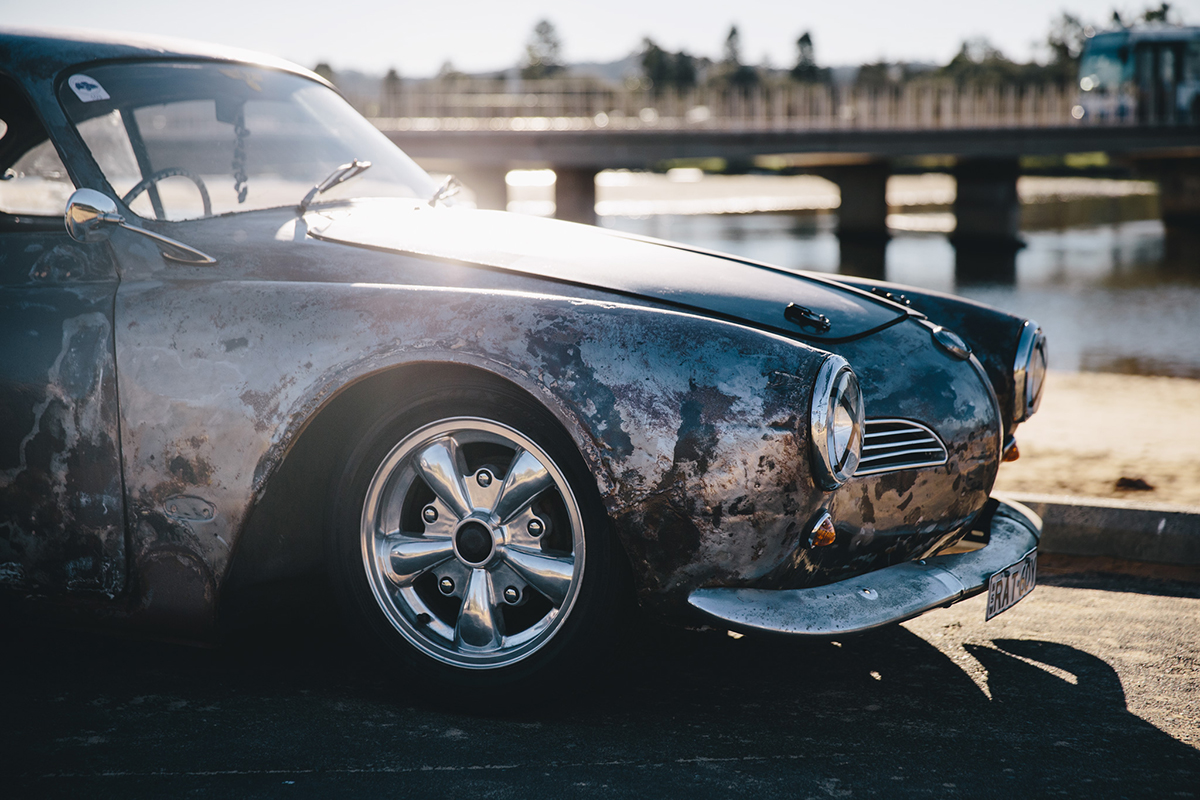 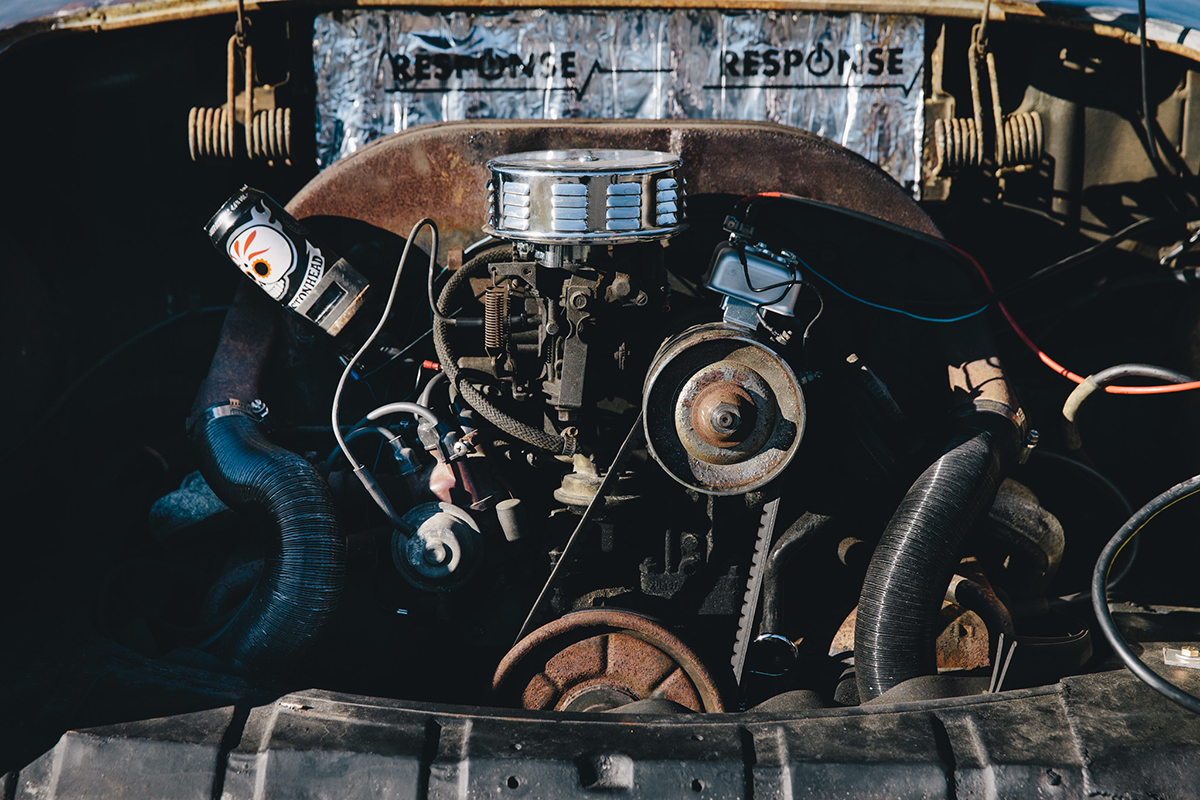 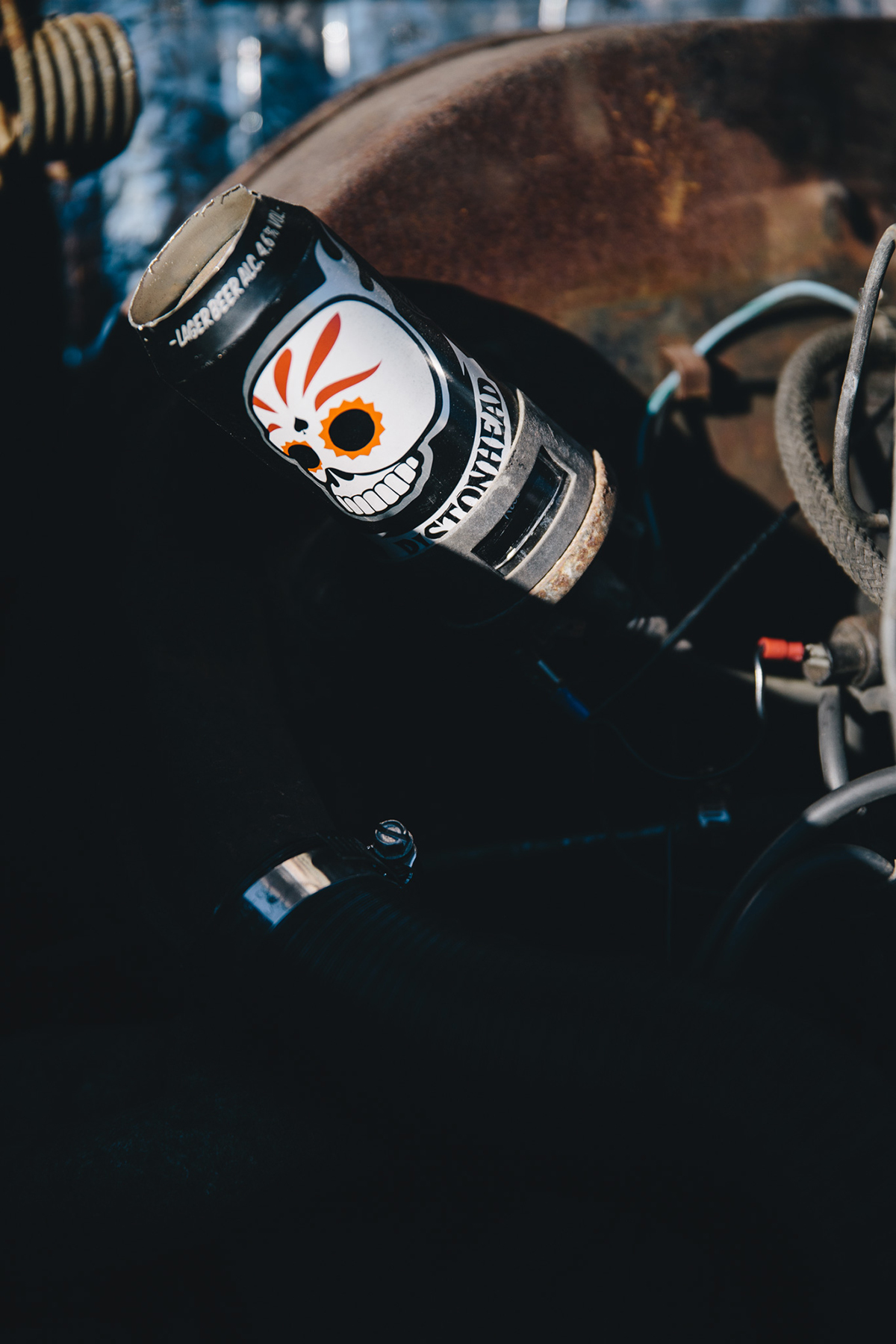 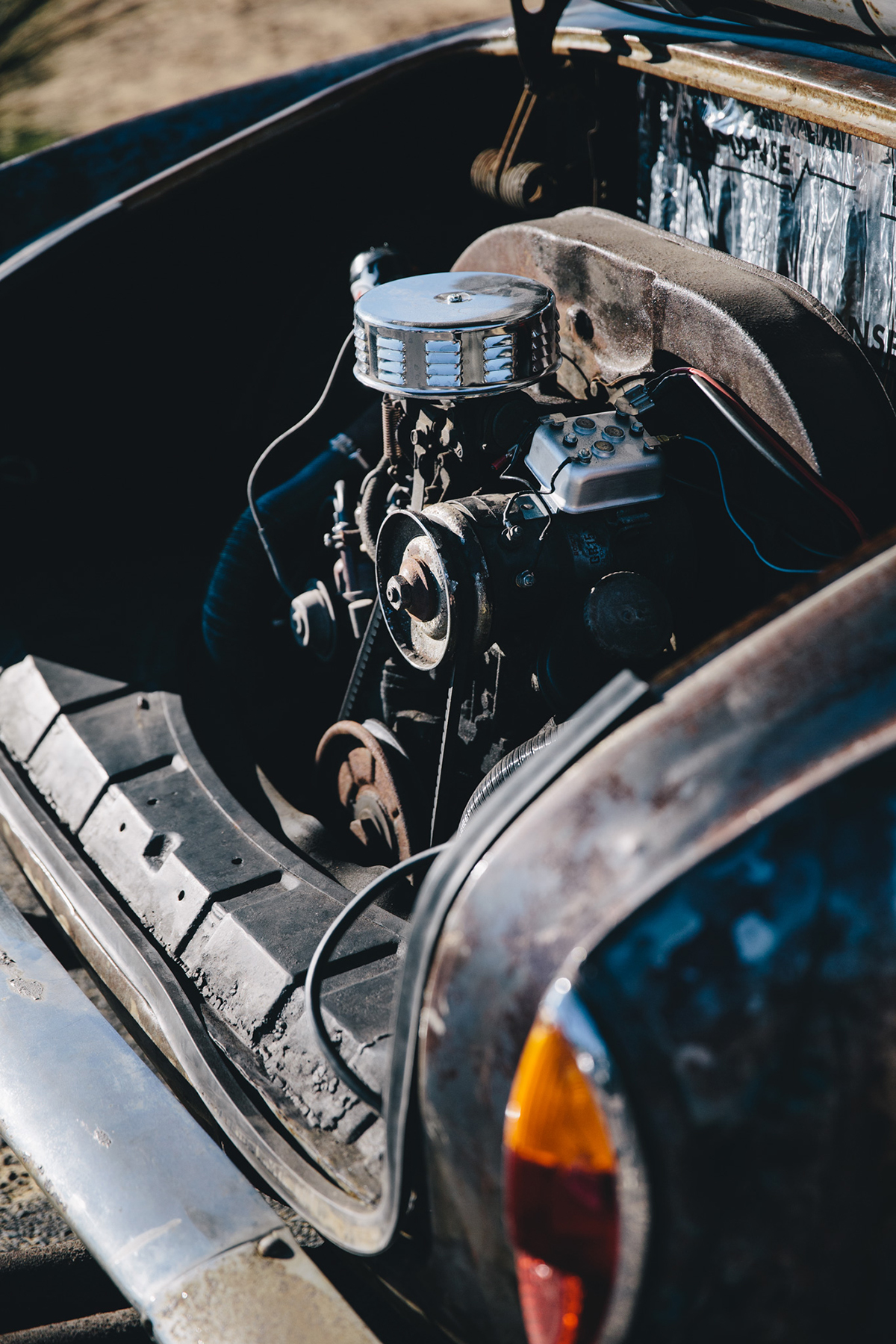 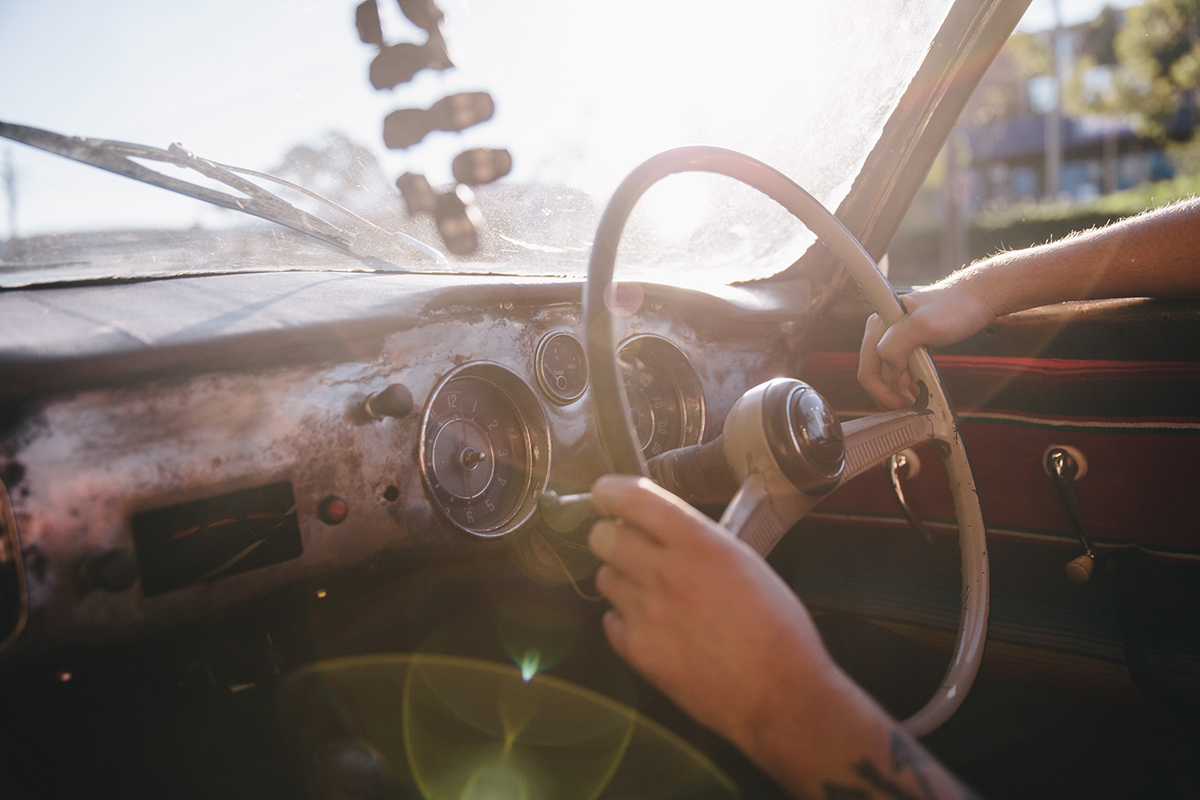