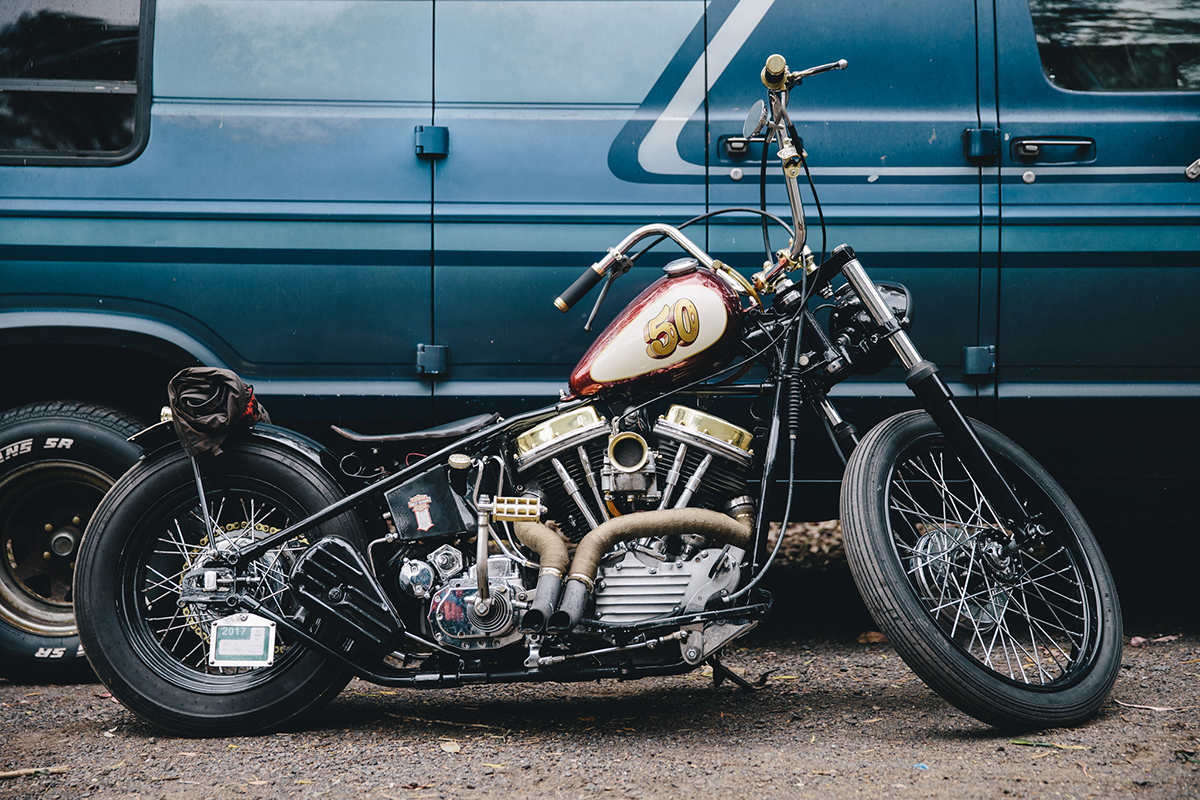 A bike sliding down the hard road doesn’t spell fortune for many, but it would be the catalyst for Sam to become the owner of this 1950 Panhead. If there’s one thing you could say about this machine, it’s that it’s bloody mint. 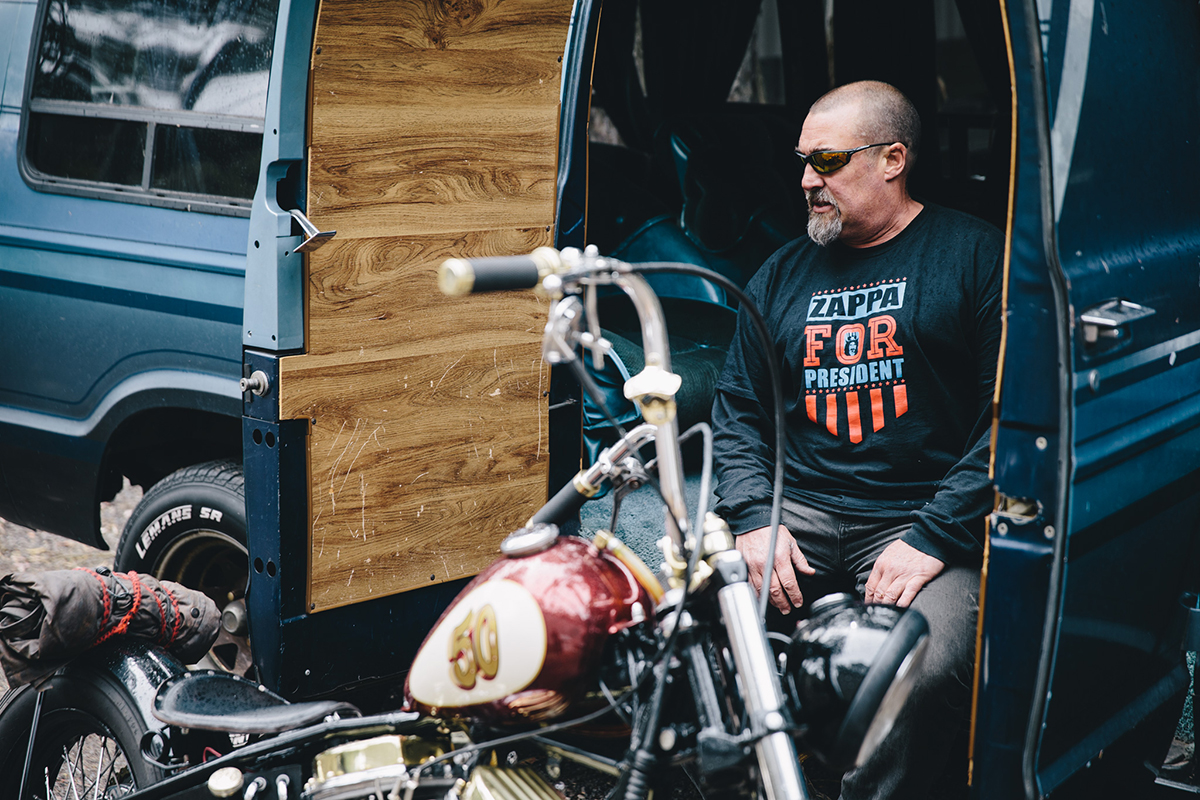 Sam has been bike mad (and possibly mad in general, who knows) since he was the height of a tabletop. It was in these early years that his passion for wheels would be solidified. “I was 7 when my dad passed away. The guy who lived next door to us used to build and ride old bikes. I was that annoying little kid next door that just hung around him and his shed – and so have been into bikes ever since.  He built 2 Honda 750 Fours; we rode them to the first Grand Prix at Phillip Island in 1989 and camped next to the track at a rally site.  It was huge, and I’ve loved older classics ever since.” 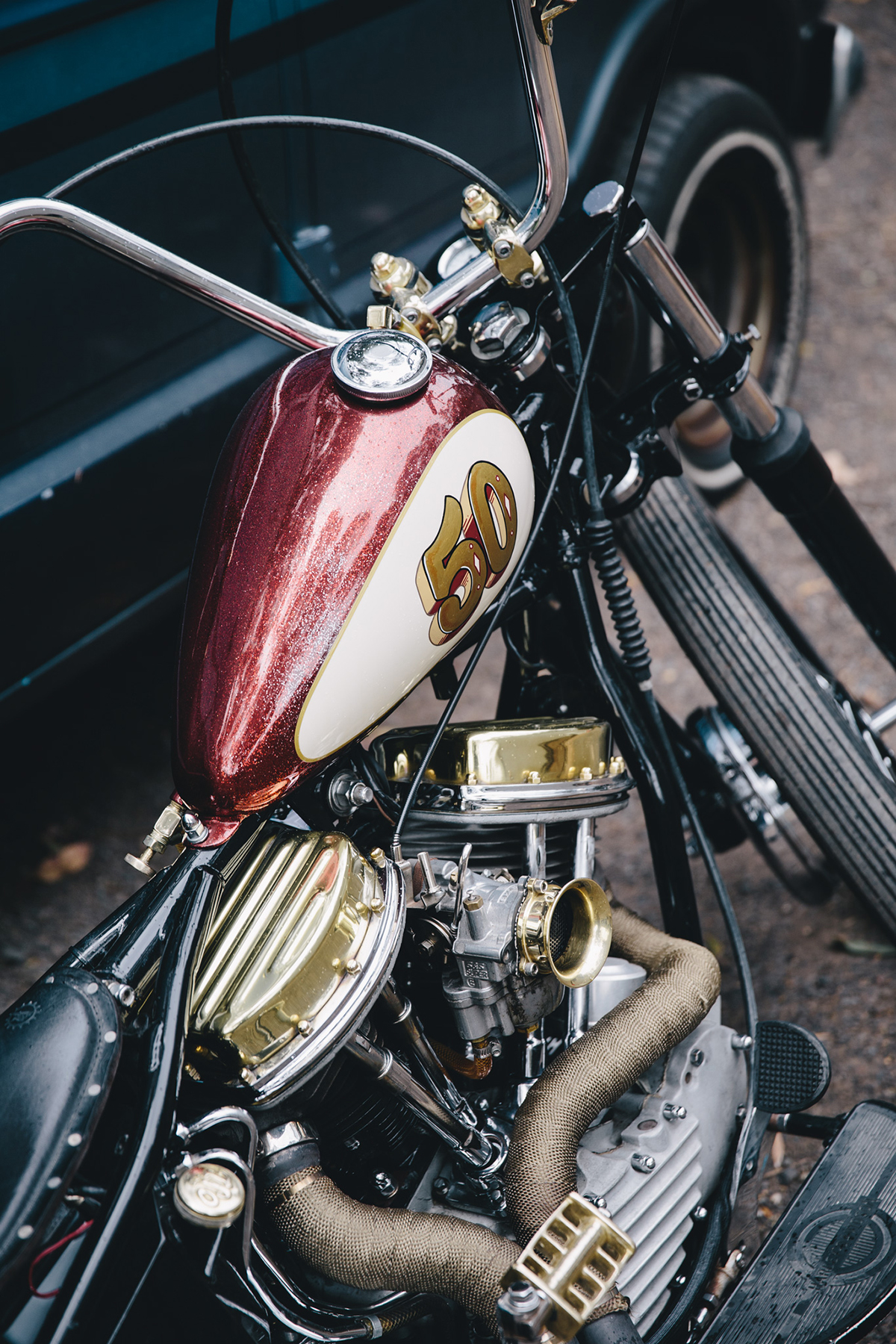 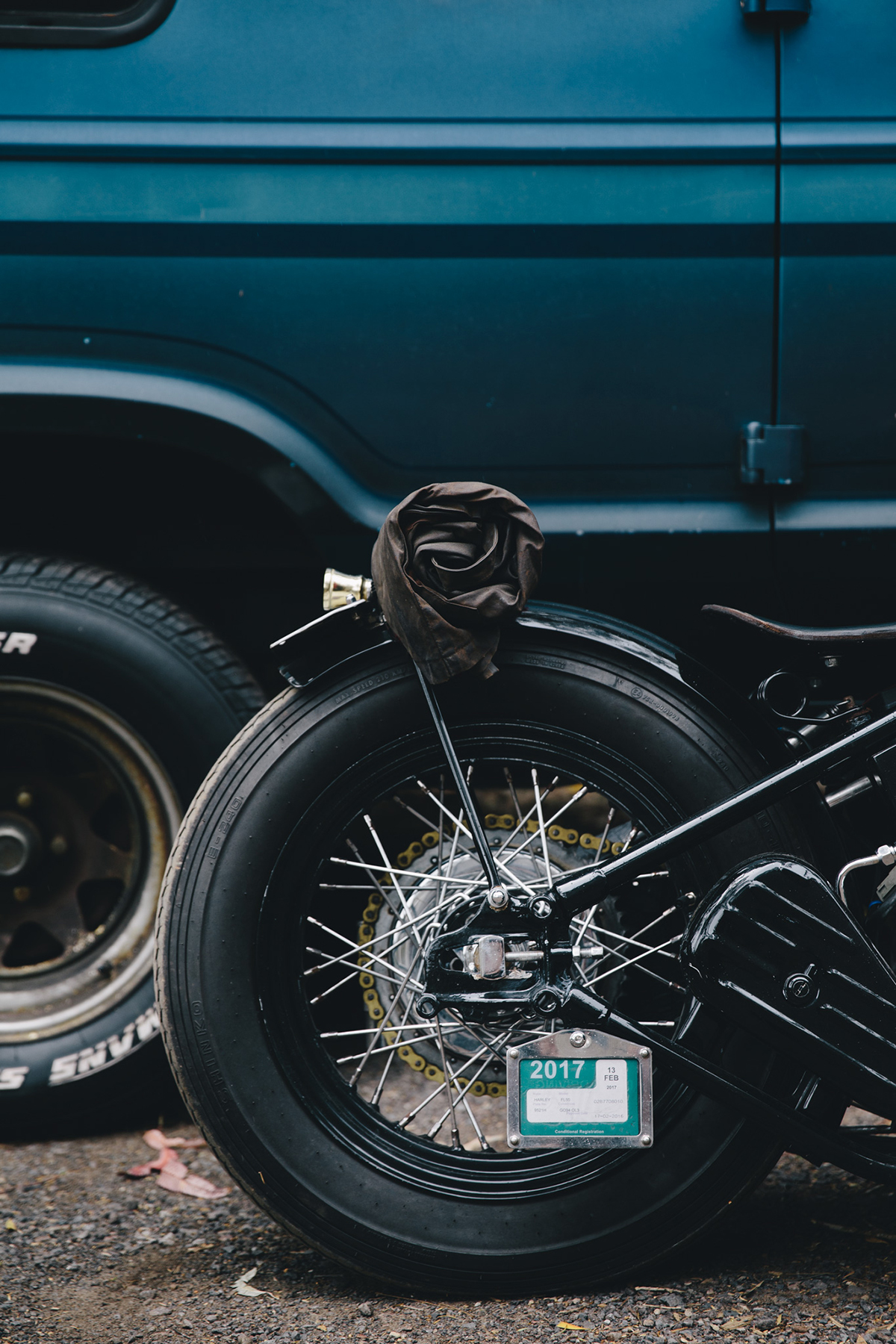 This love for classics would later result in a particular American engine coming into his possession. Sam and his Missus were getting about happy as Larry on their 1960 BSA Super Rocket, so an old Harley-Davidson was not on the cards at this point – or so Sam thought. After a bike his good mate had been working took on a slide down some cold hard road, this 66-year-old Panhead engine was removed from the original machine to make way for a more powerful heart. “There was some damage, but none to the motor. My mate Rob rebuilt the bike and a guy from Sydney, who’s also now a good mate, bought it from him.  This guy wanted a bit more power than the old Panhead had, so Rob installed a Panhead replica with a shitload more grunt. The original motor came out and just sat on the bench while Rob was tossing up selling it.  I just dig old engines – any old machinery for that matter. This engine was just a cool looking thing sitting on the engine stand on the bench. I was keen to buy it, just to own it, or even build a bike – under Rob’s guidance of course.” 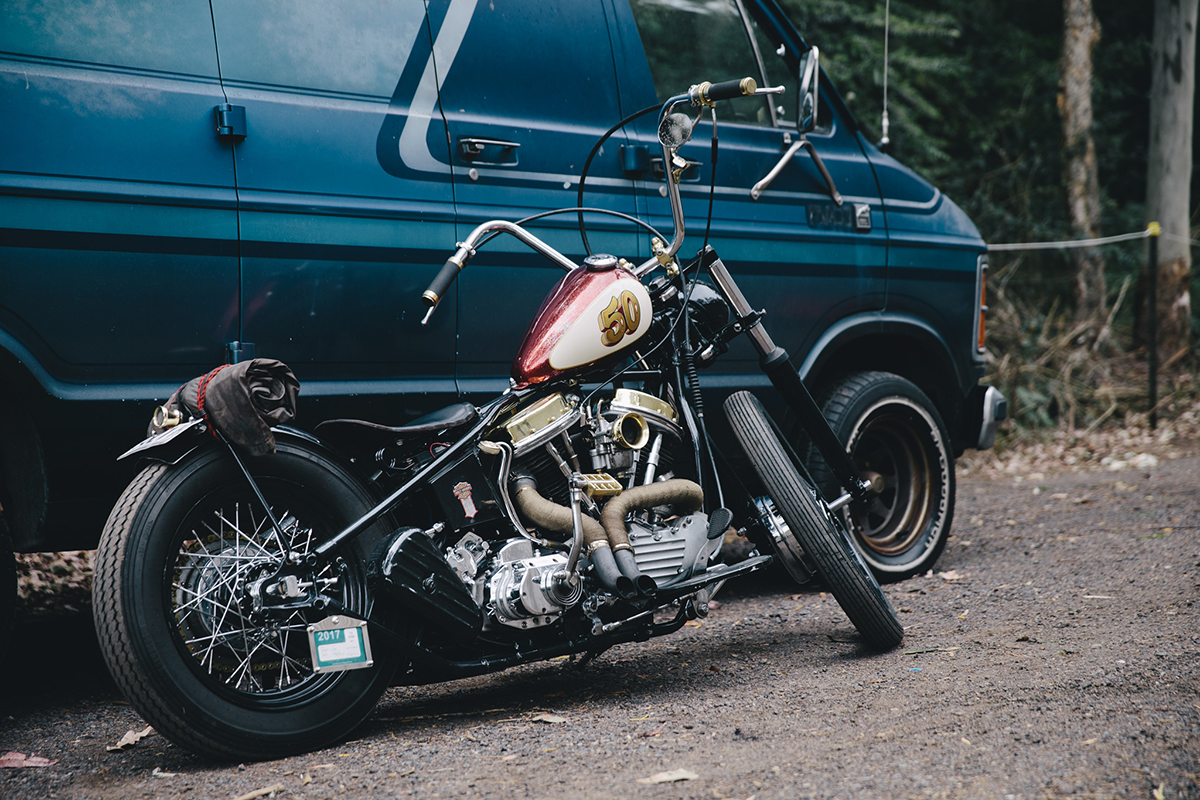 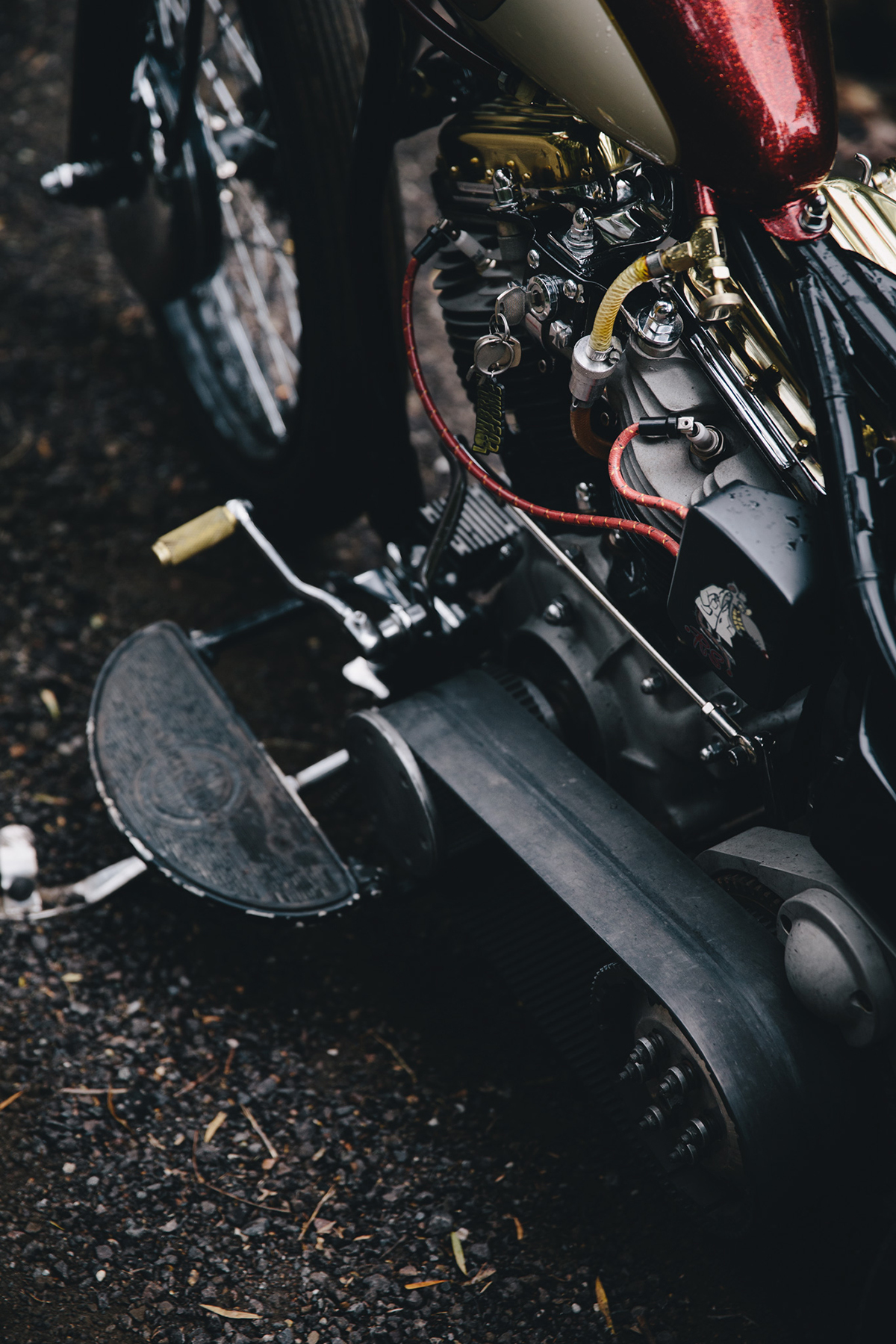 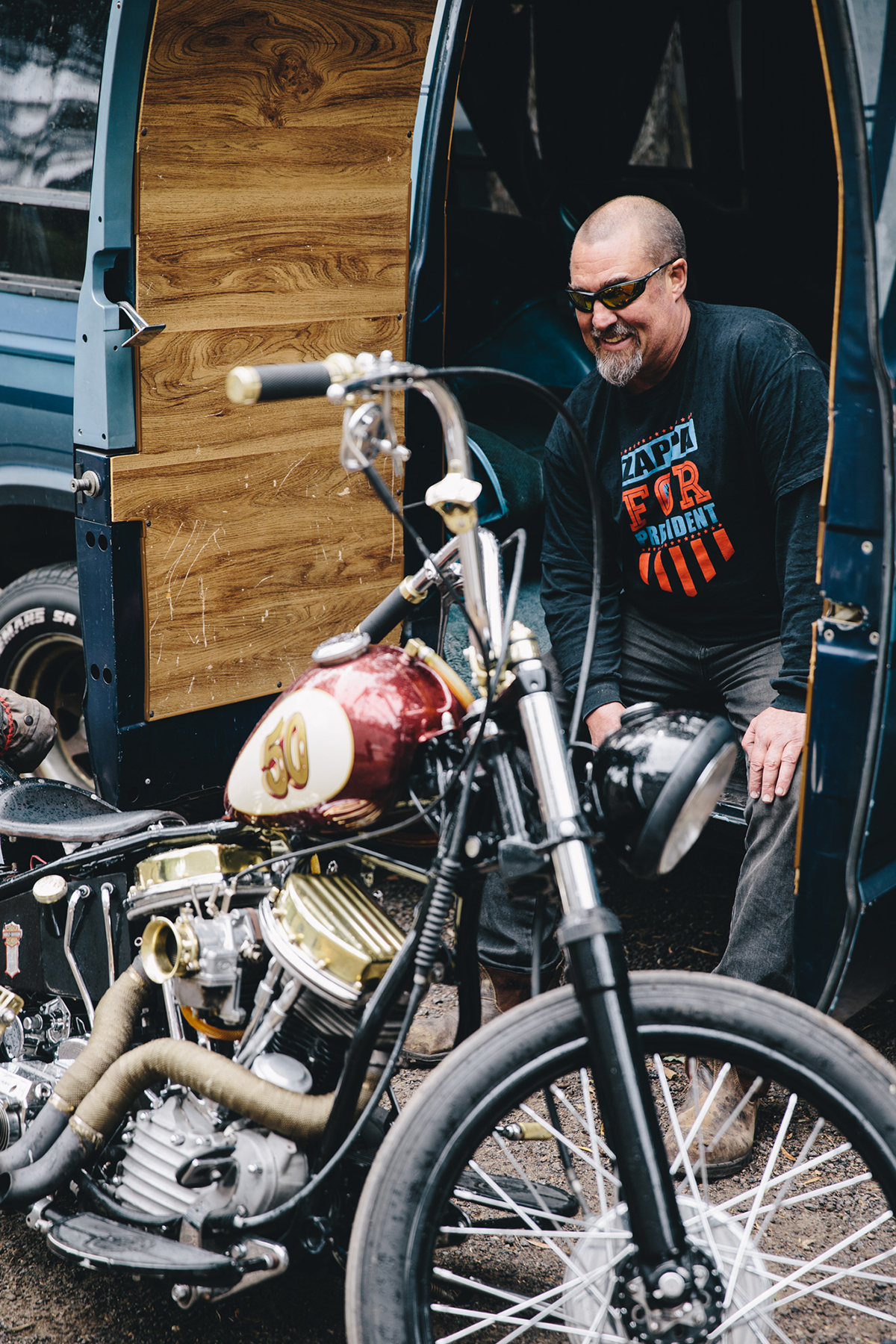 In the end, Sam’s mate Rob would start a new build with this lonely old engine that sat on the shelf for so long. The more Sam watched the build progress, the more he was convinced this would be the machine for him eventually. “I would never have thought of interfering with the direction that Rob was going as he made the build. That’d be like walking into the Sistine chapel and giving Michael Angelo a few tips on brush technique and colour selection.

The stance on this bike was tough, great lines.  The frame sat low with the shortened front end.  As soon as it was finished I loved it, and claimed it as my own.  It was the perfect setting for this grand old engine.  I’ve made a few cosmetic changes since, but time does that.  I went with a bling look, taller bars (originally had drag bars), brass risers, brass rocker covers, tank re-paint, shorter rear guard, and shitloads of other brass added.  Rear suspension is a matter of how much air you put in the rear tyre.” 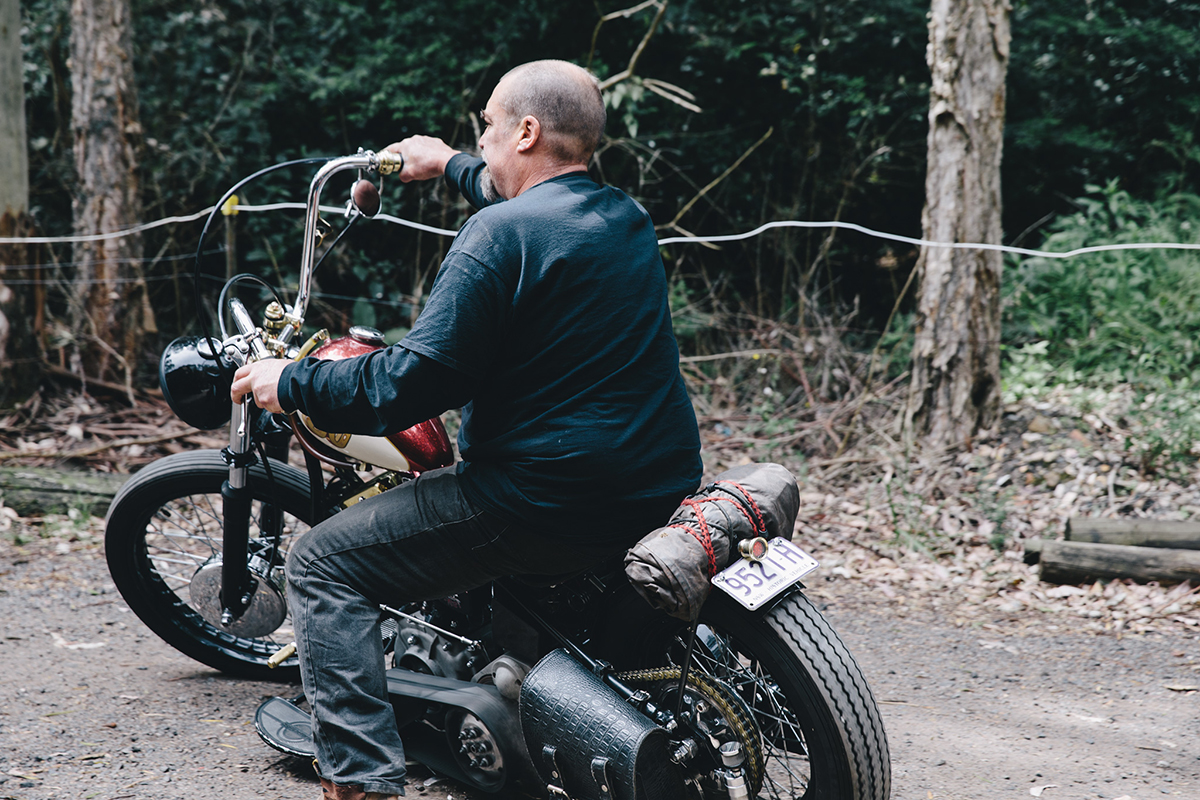 There’s a fuckload to look at with this bike, it’s a gleaming example of a top build. It’s got bling, but not too much. It shines where you want, and is rough elsewhere. The crowning feature on this rocket limousine is no doubt the sterling work on the tank. Originally gold, the tank boasted a thin dusting of gold sprayed with a clear adhesive. The seams and all the tank’s raw foundings would be shown off through this scheme, but this would not be the destiny for this fuel tank as rocks and stone chips eventually took their toll. 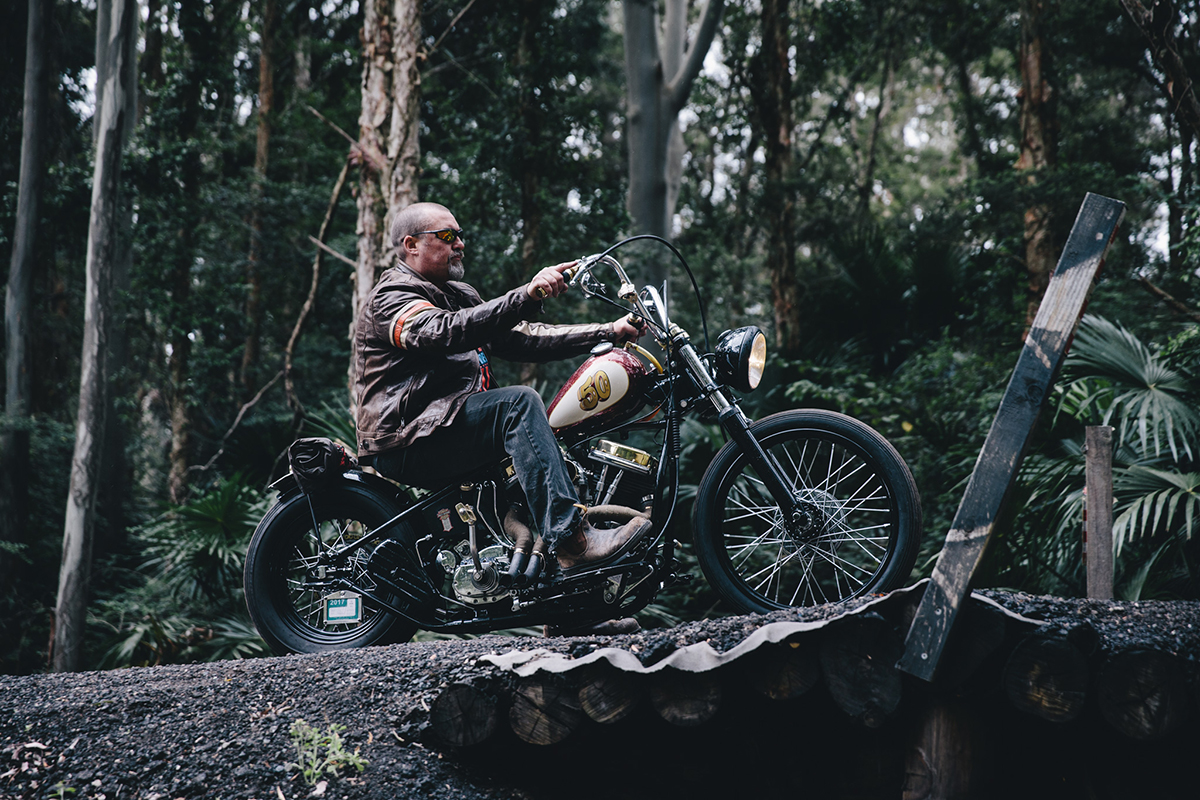 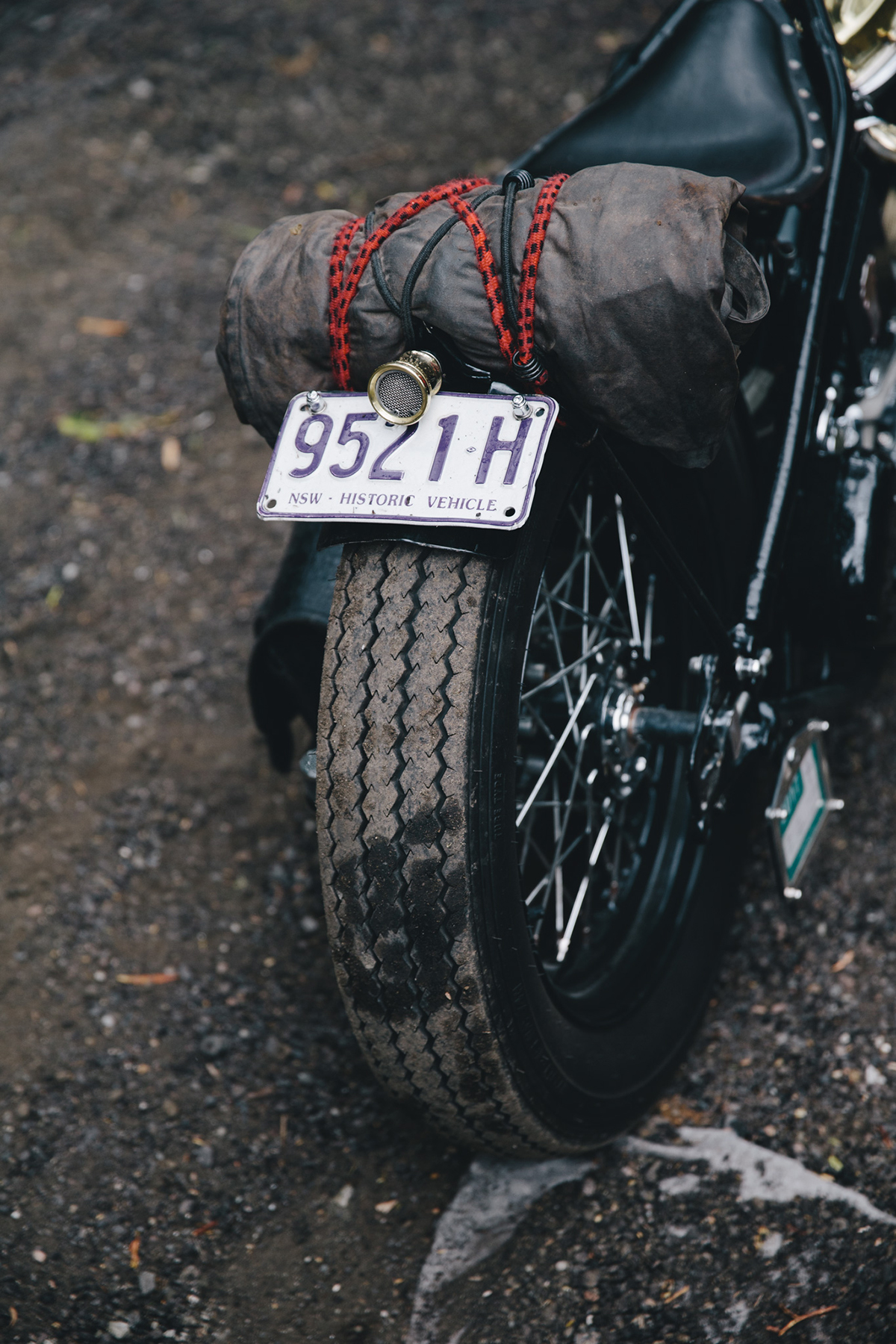 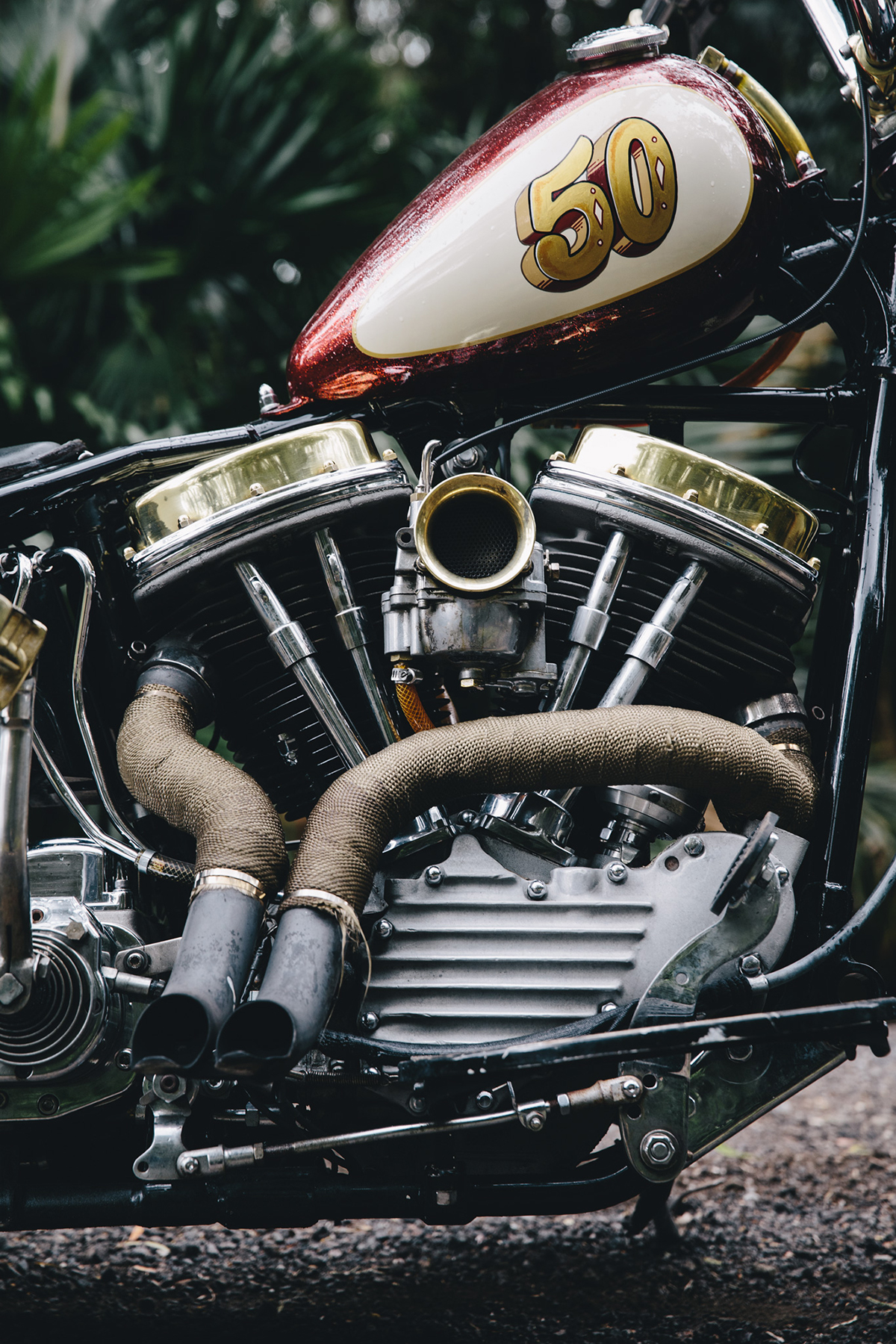 “Over a few ales, Rob and I sat down at his shed and planned a respray.  Something red and bling with old school cream inserts and a couple of period racing numbers was the plan, we think.  Whatever it took to get a rich red 70’s flake look – and whatever Rob had laying around his paint room. After stripping the tank, Rob scuffed up the raw metal with a grinder to give it a textured look before applying the clear “primer” again.  Rob dusted each coat of colour to keep it as transparent as possible.  On went the red, and it came up pink, so on went some black and it came up dark pink… Then some orange and it started to go a weird olive/pinky colour.  We just kept going until we finally got it where we were both pretty happy.  Besides, we were running out of beer…

The flake was next, Rob had some different coloured flakes – so on they went!  A clear coat followed and we were both pretty stoked, it really popped when you looked at it in the sun. 17 coats of paint in all…”

One more coat and the tank could legally drink at the pub! 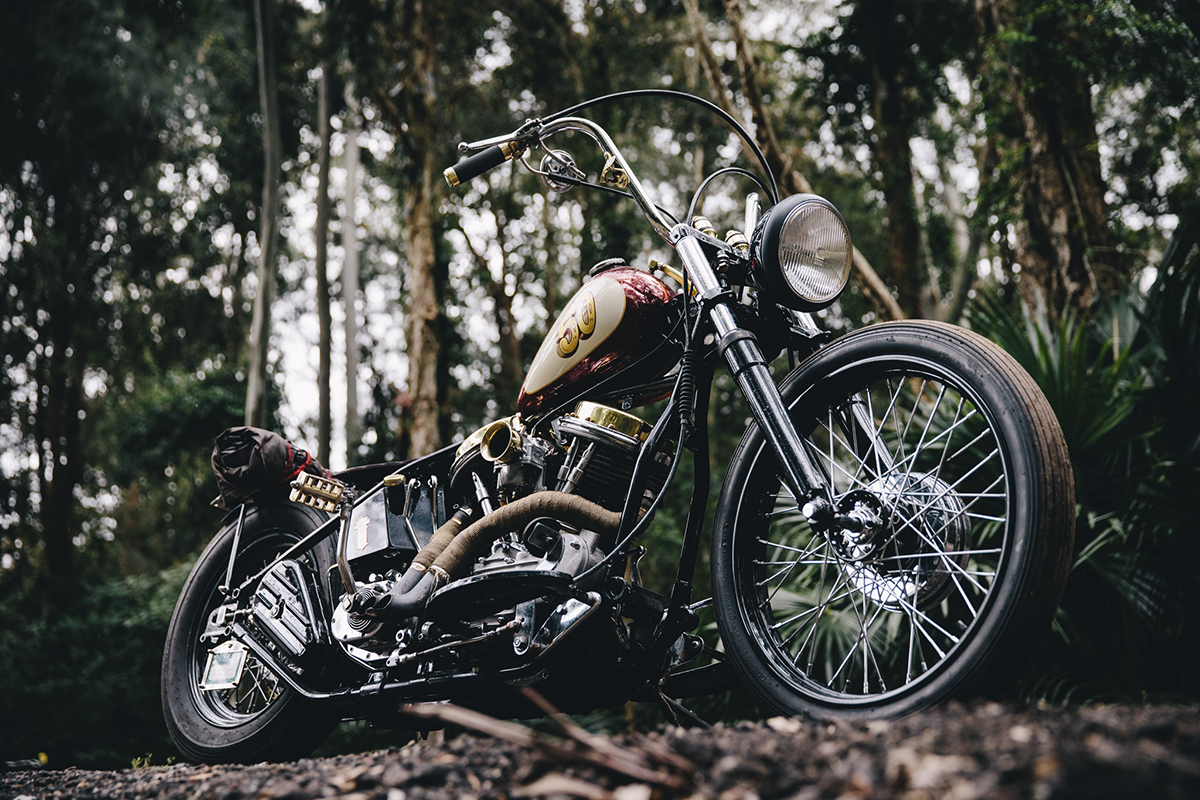 Once the fridges at the shed were rearmed with plenty of beer, the inserts were painted onto either side of the tank with some materials that had been left over from a recent 1937 Knucklehead restoration. “We tracked down a local pinstriping guy named Shack’o. We heard a bit of his reputation in the hot rod and old bike scene.  He came to Rob’s shed and we had a chat with him.  We all instantly hit it off, and he showed us his work.  His stuff is very cool.  He did the numbers on the tank, “50” for the build year of the engine and hasn’t left the place since!  He’s a great guy, rides cool bikes, builds cool cars, and paints killa shit.” 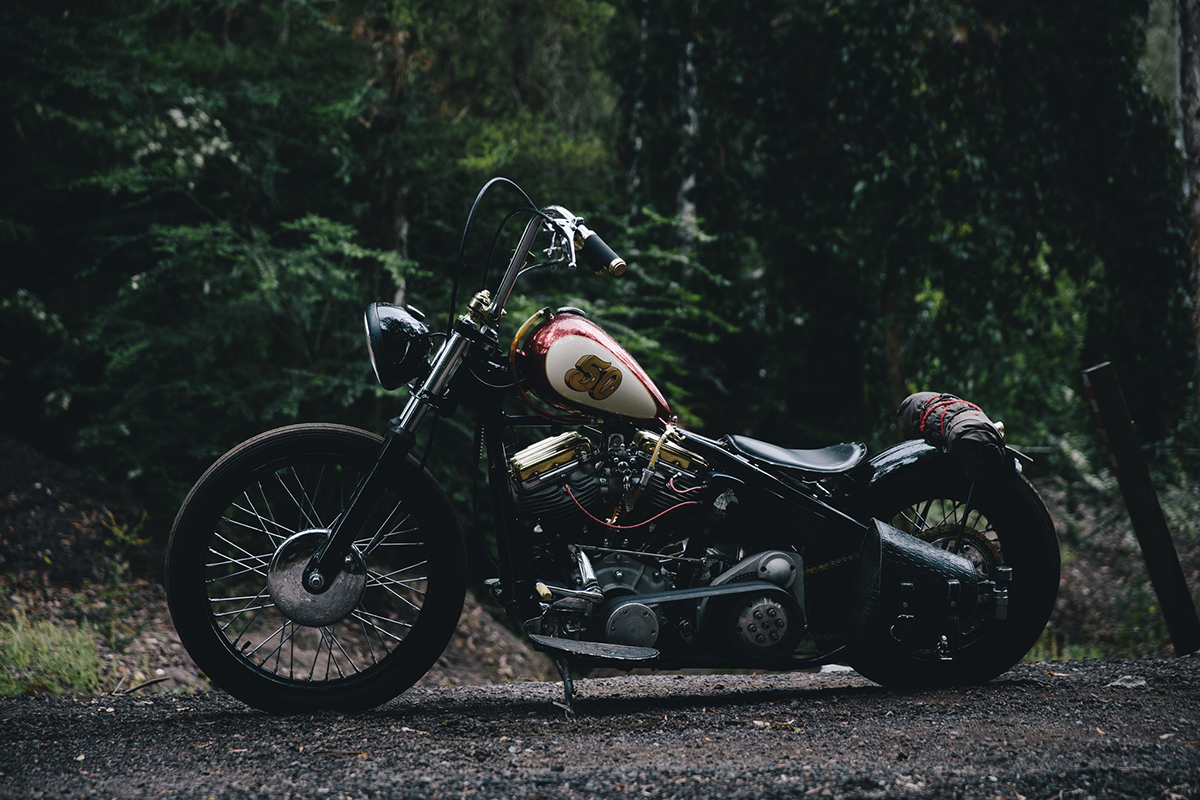 It’s not just original parts that adorn this build, with some modern additions such as a 6 speed trans with kick and electric start, and 3″ open primary. The rear guard was once a vintage Ford spare wheel cover, which was split and narrowed to fit the tyre profile.  The pipes were hand made by Rob and suited the look of the build perfectly, and then wrapped to reduce the number of accidental tattoos. 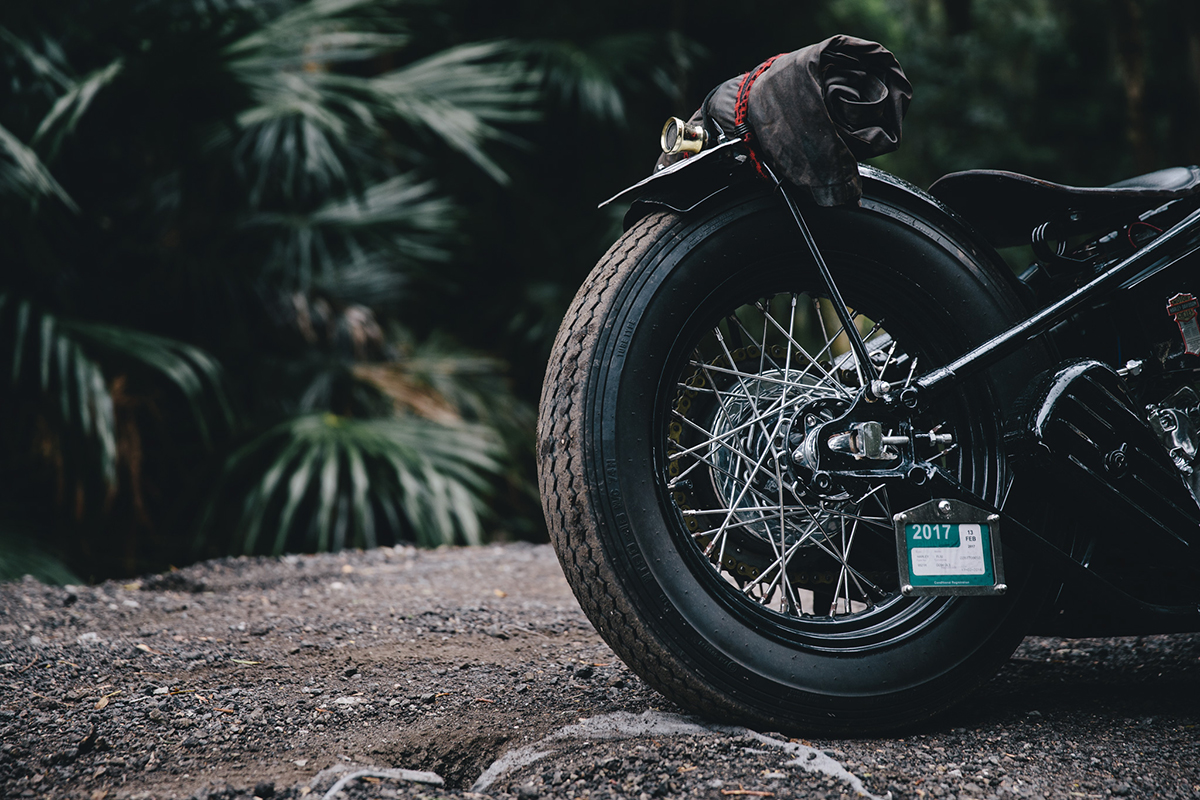 “If I ever get the whim to change the tank again, this one’s coming off the bike and going straight to the pool room!  A bike like this is always a work in progress; it’s such a great bike to ride.  Eventually you think of some way to make it better, or even just different.  I’ve already got a taller sissy bar in mind to strap a pack to.

My favourite thing about this bike is… it’s mine.”

Like Sam’s Held jacket? Well you bloody should, he was a lucky duck who won it at this year’s Throttle Roll Street Party. Head over to www.heldaustralia.com.au to grab one for yourself. 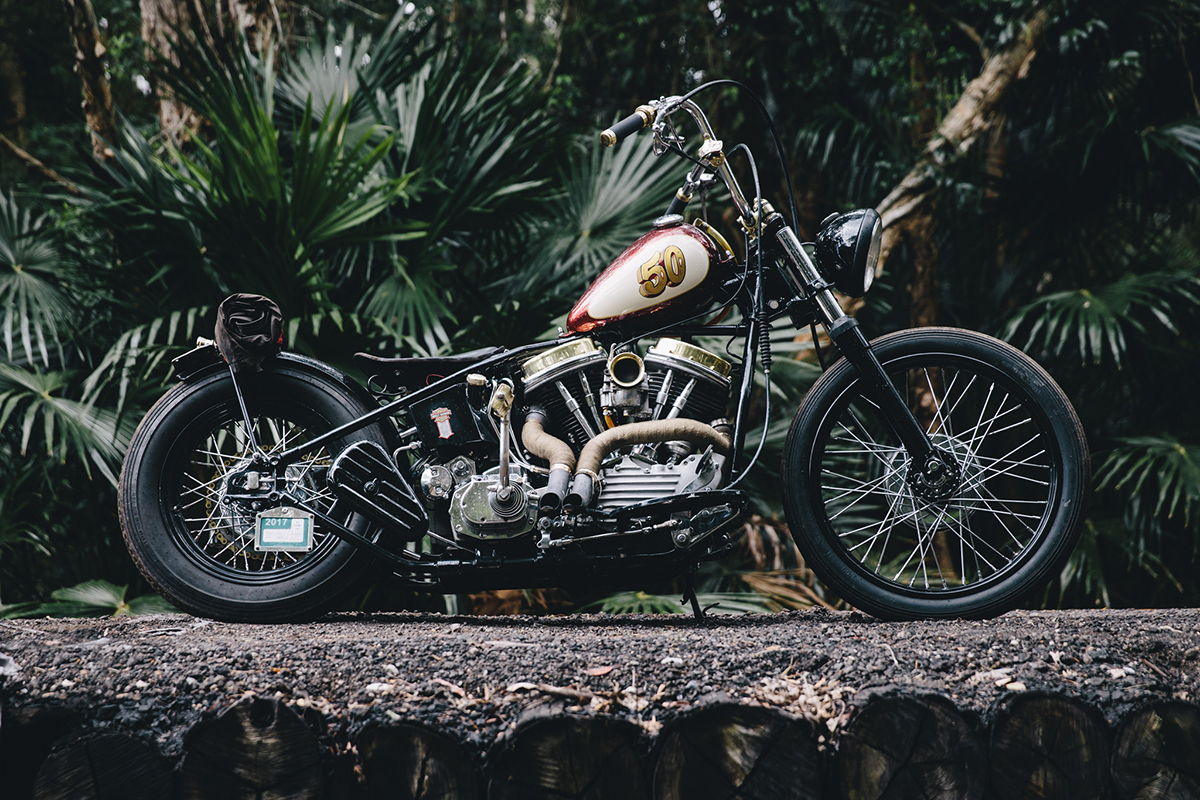