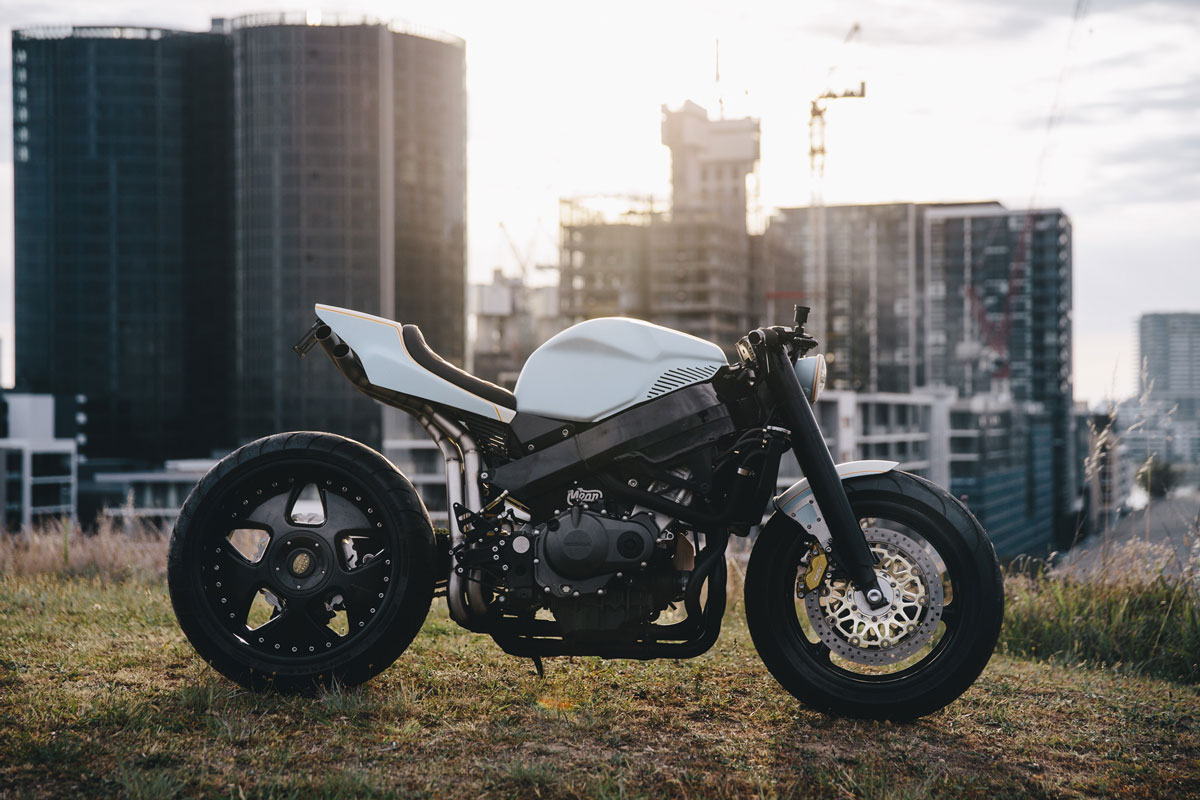 If you’re a fan of large posteriors and are unable to fabricate the truth, then this is a machine for you. This Honda CBR 954 is the result of a love affair between a streetfighter and a café racer  – with very aggressive results. 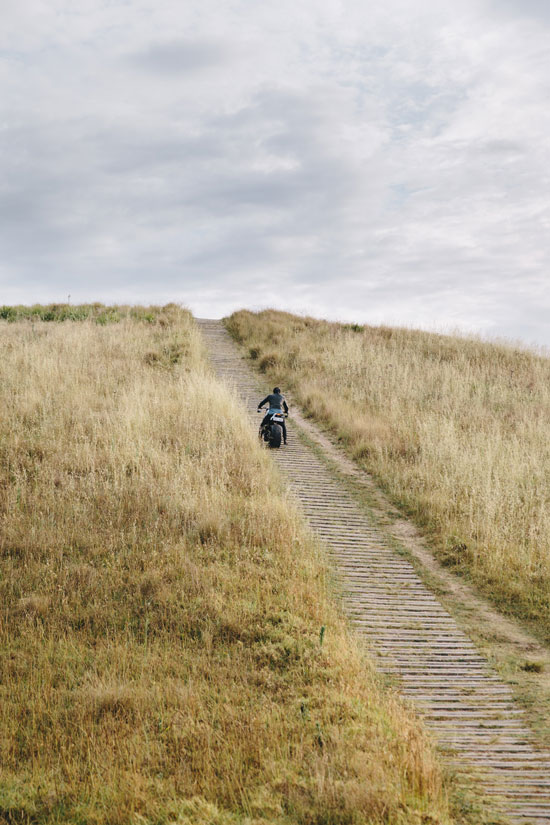 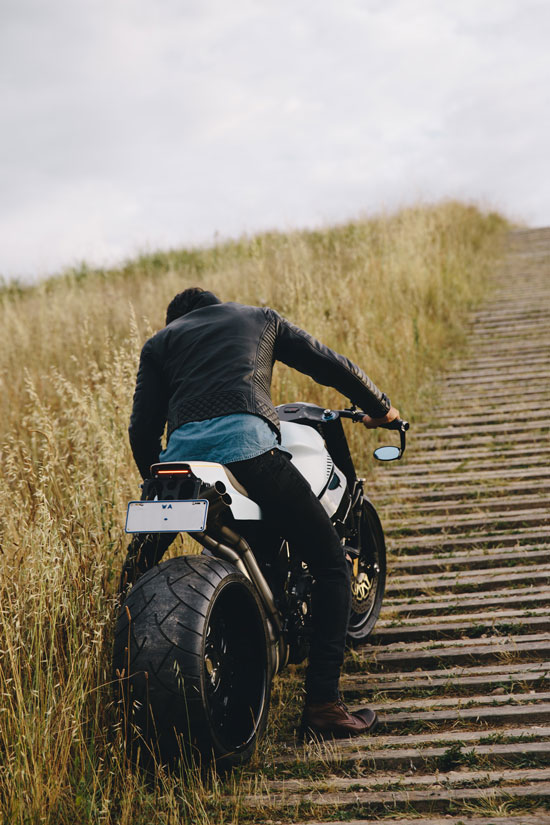 The prelude to this build would go back nearly ten years from today. Wenley was head over heels for streetfighters and had started making parts for a machine that was envisioned, but not yet built. Despite the lack of a finish point in site, parts were being gathered from across the globe for what would no doubt be a remarkable result. “I had gathered together the VFR swing arm, the front forks, wheels etc but soon after bought a Triumph Bonneville. From that day my world changed as customising Bonnies became a regular thing, so the streetfigther project would be put on hold for now. I was in my element with the Triumph Bonneville craze pounding at my doorstep. I was sleeping at a minimum; all I could think about were motorcycles. It was at this time that I met a new bunch of crazy riders called SCR which, made this little world of mine much more exciting.” 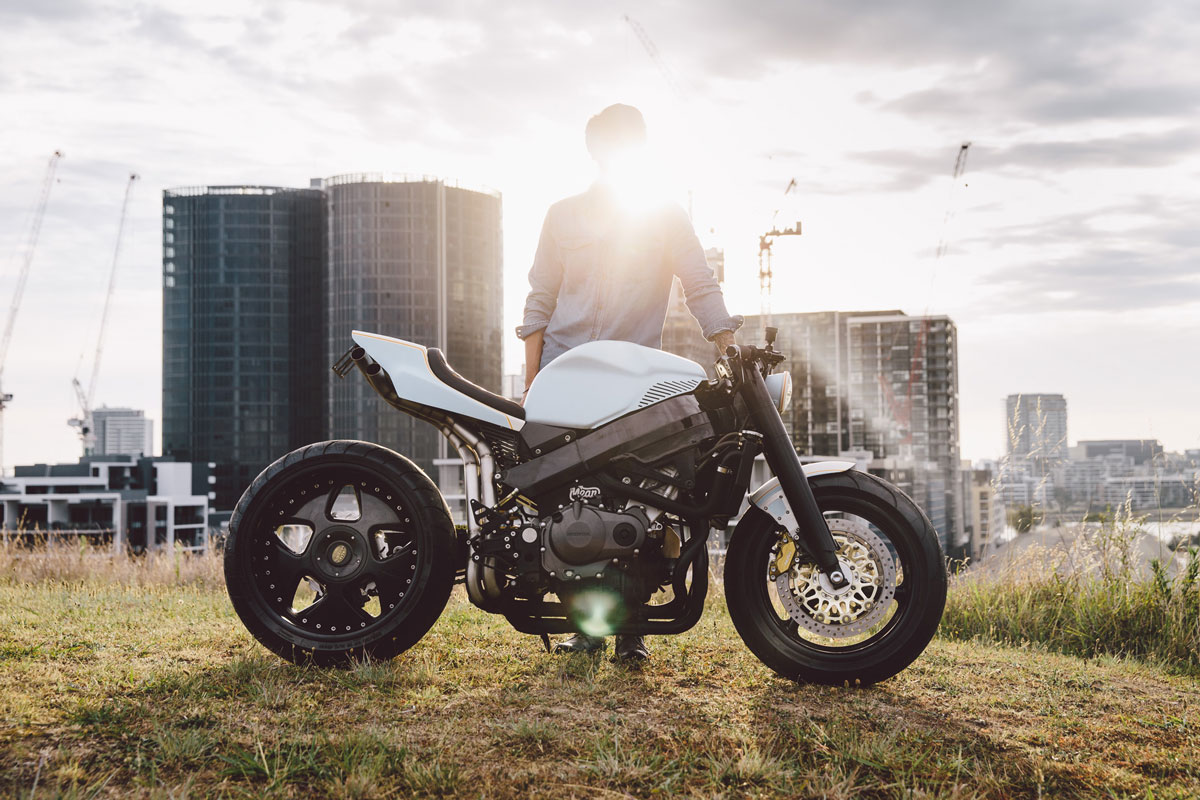 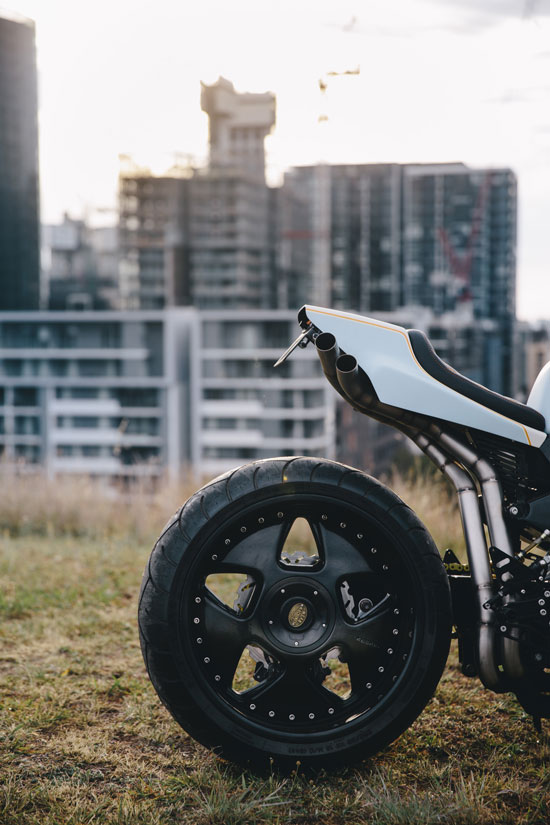 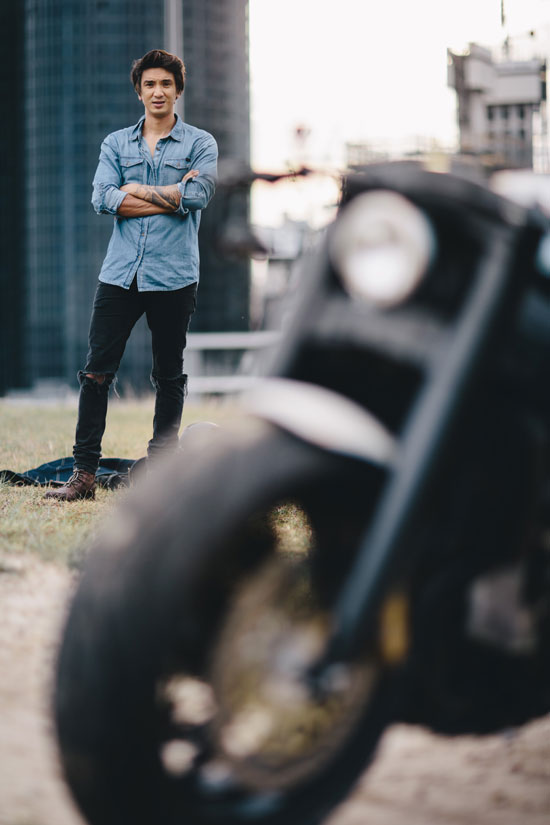 Despite the British Bonnies taking over, its grip on Wenley would last only so long. The streetfighter build was still on the table (along with a ton of parts in the shed) and so it was time to finally get this build going. One key part was missing – an actual bike. With enough parts to sink a ship, but not quite enough to make a complete working bike – a donor machine would need to be enlisted. This would result in a 2004 Honda CBR 954 being wheeled into the workspace and the chopping to begin. 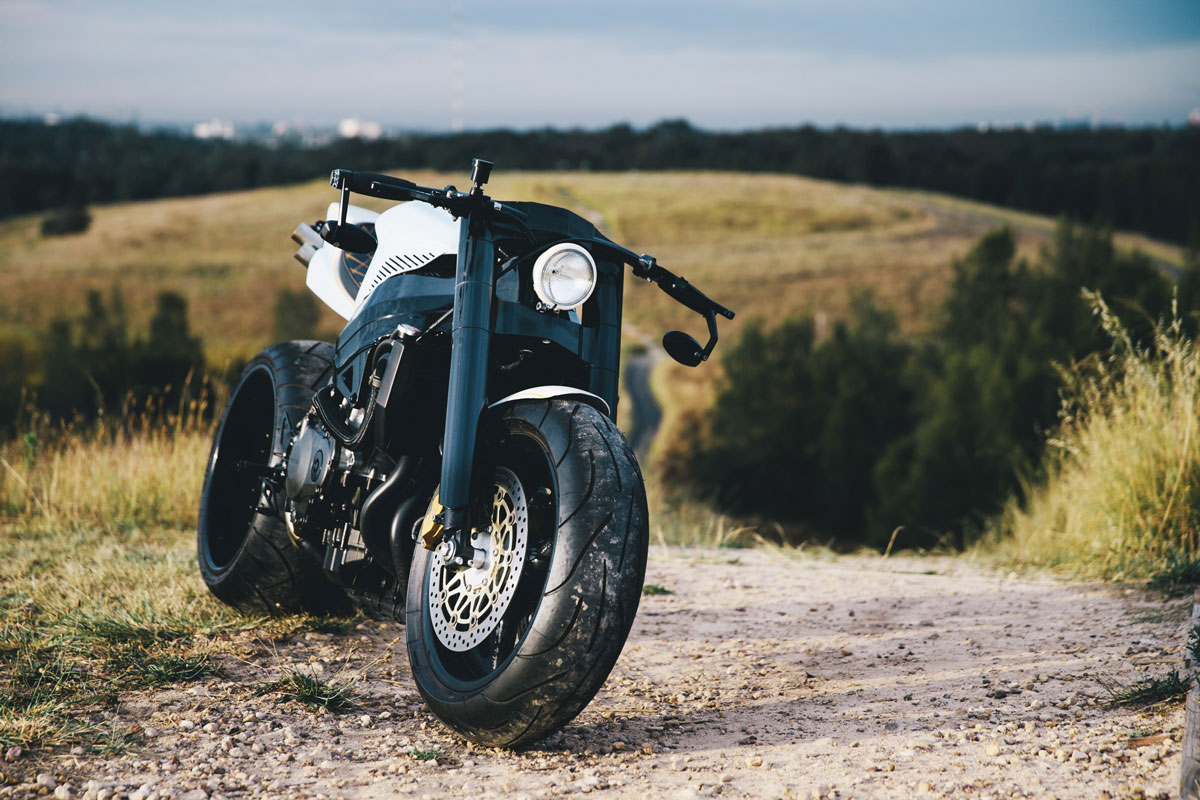 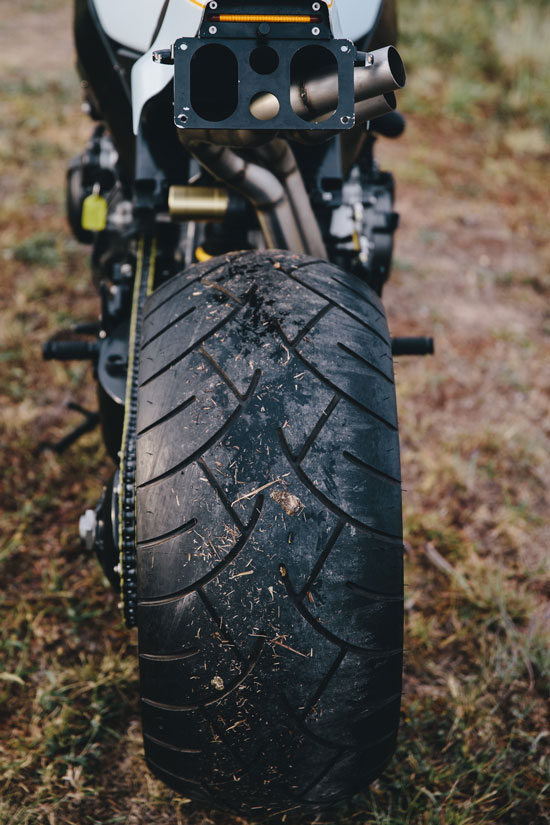 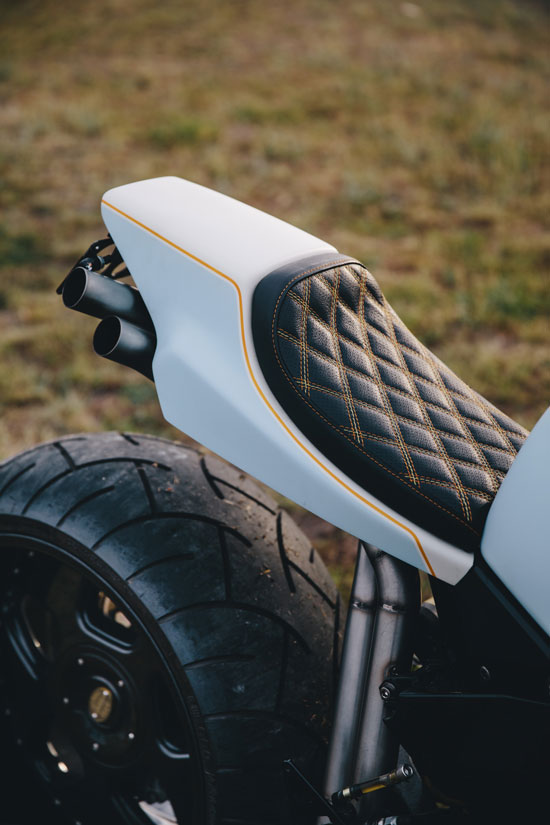 “I retrieved the parts I had gathered all these years from under my parent’s house, brushed off all the cob webs and they were good as new. This streetfighter idea was initially going to be pure streetfighter with the mask headlight, belly pan and pointy tail.  Since I was building the Triumphs with the café racer/retro theme in mind I went with a retro seat and headlight – it was a huge gamble but I think it worked out ok for my first streetfighter.” 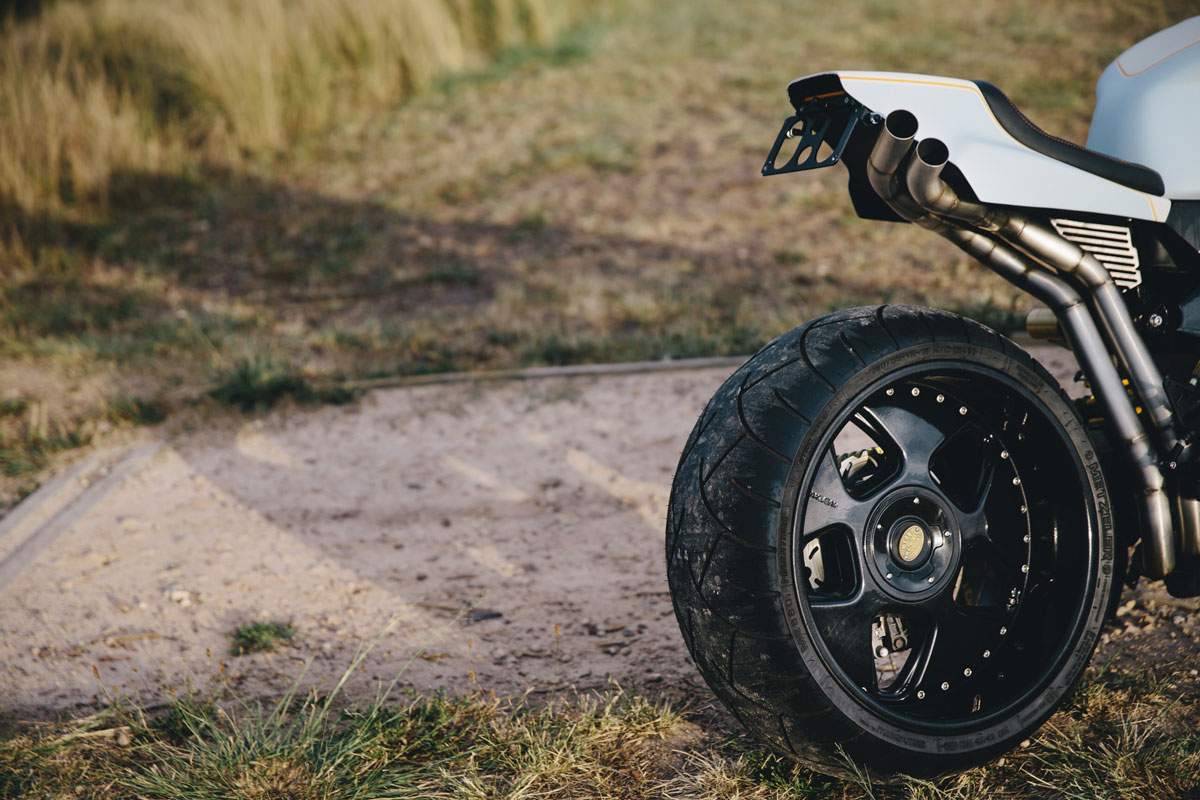 As the build progressed the ideas flourished, along with the cost going into this machine. Some modern Motogadget parts were to be added which would accentuate the modern retro aesthetic this bike would start to take on. A mini speedo/idiot light dash and some bar-end indicators would add the perfect subtle and stylish feel and hold true to the stripped back streetfighter roots. Next would be to widen a spare rim that was lying around to fit a 180 tyre for the front, with a custom fibreglass fender made by Wenley himself. The CNC front fork triples would be one hell of a chunk of alloy, with plenty of fiddling around to get the spacers and axle to fit such a monstrous front tyre. 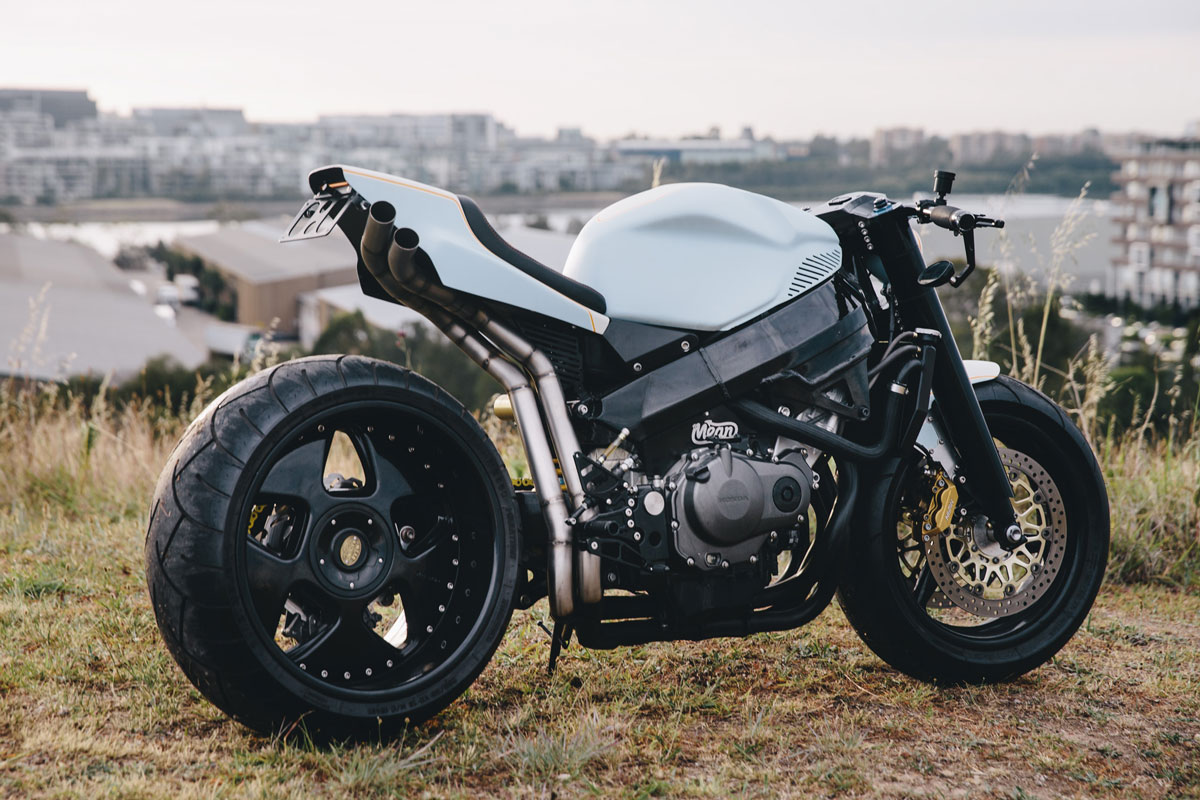 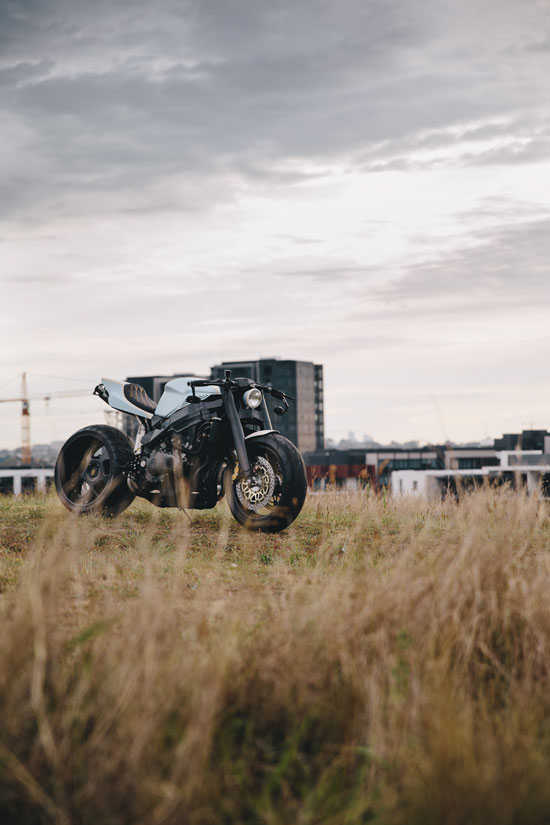 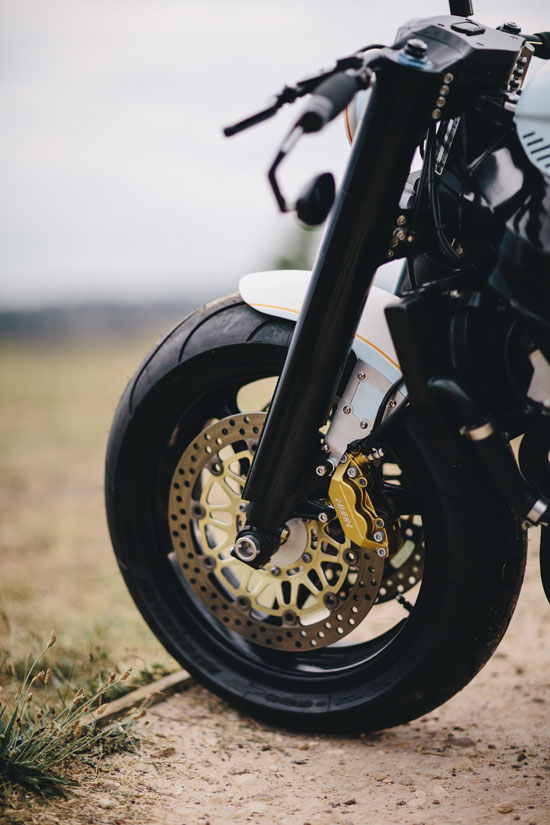 “Next up would be to add the drag bars, but there was nothing  that would fit so I had to bend them myself. I chose 1” as the ¾ looked tiny on the bike in comparison to the rest of the build. I got rid of all the instruments and switches, popped in an internal throttle with some bar end mirrors. The bar end indicators work with the internal throttle unit – which is a bit of a secret” 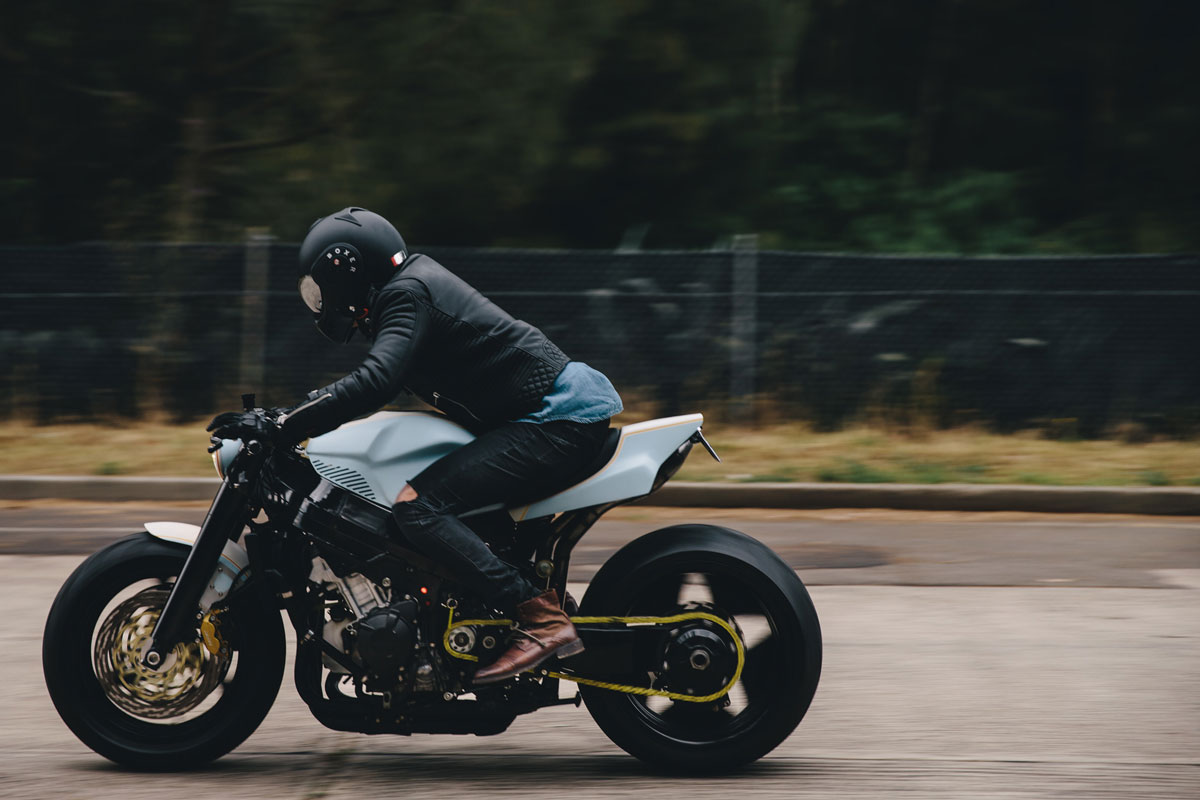 Anyone riding behind this bike will immediately notice its bodacious booty. The massive 280 rear required a car rim to be fitted, which by all means was no easy feat. “I know a lot of people that have done it as well, and I certainly commend them for it! With the front and rear done, the rear frame was custom made to fit the tracker tail. The tank had a huge hole where the air intake sat, so we closed that up with a laser cut piece, with lots more fab work done by Billy who I used to work with. With all the mock up done it was time to get painting. We went all black on the frame and handed the body parts to Jack, our resident painter. I wanted a retro theme with a touch of orange. Why orange? Because when the seat was being made I saw a Lamborghini with orange stitches on the seat, so I told Andrew from Beyond Trims to make it look the same – now we were in trouble! I didn’t want the bike to be orange, so jack suggested we continue the theme with the orange lines, which worked perfectly. 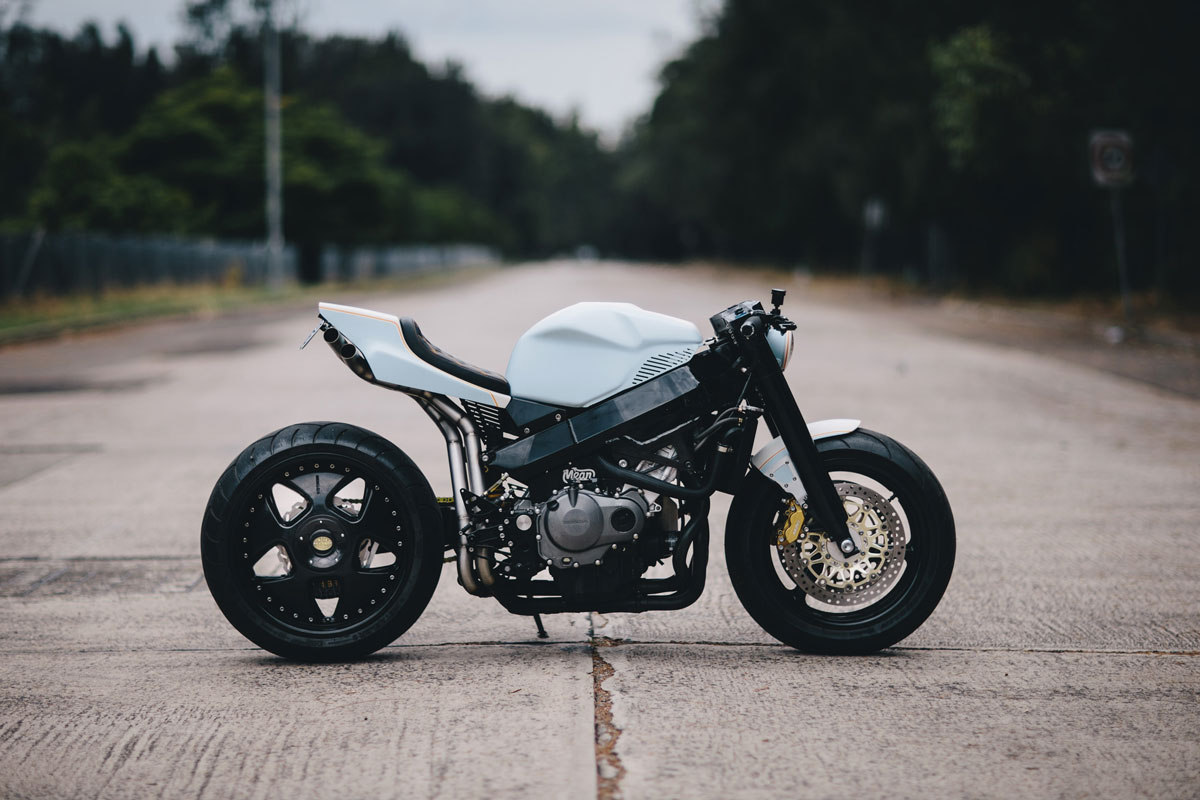 The last on this growing list of parts and modifications would be the killer exhaust, which kicks out an incredibly aggressive and rude tone (head to our instagram @throttleroll for a taste) Wenley created a double shotgun style, with the ends sticking out one side of the tail of the bike. After many years of accruing parts and ideas, the machine now dubbed ‘The Angry Bird’ would finally be complete. “A big thanks to my life long friends , fabricator Billy Kuyken and painter  Jack Johnson – I couldn’t have done it without you crazy bunch!” 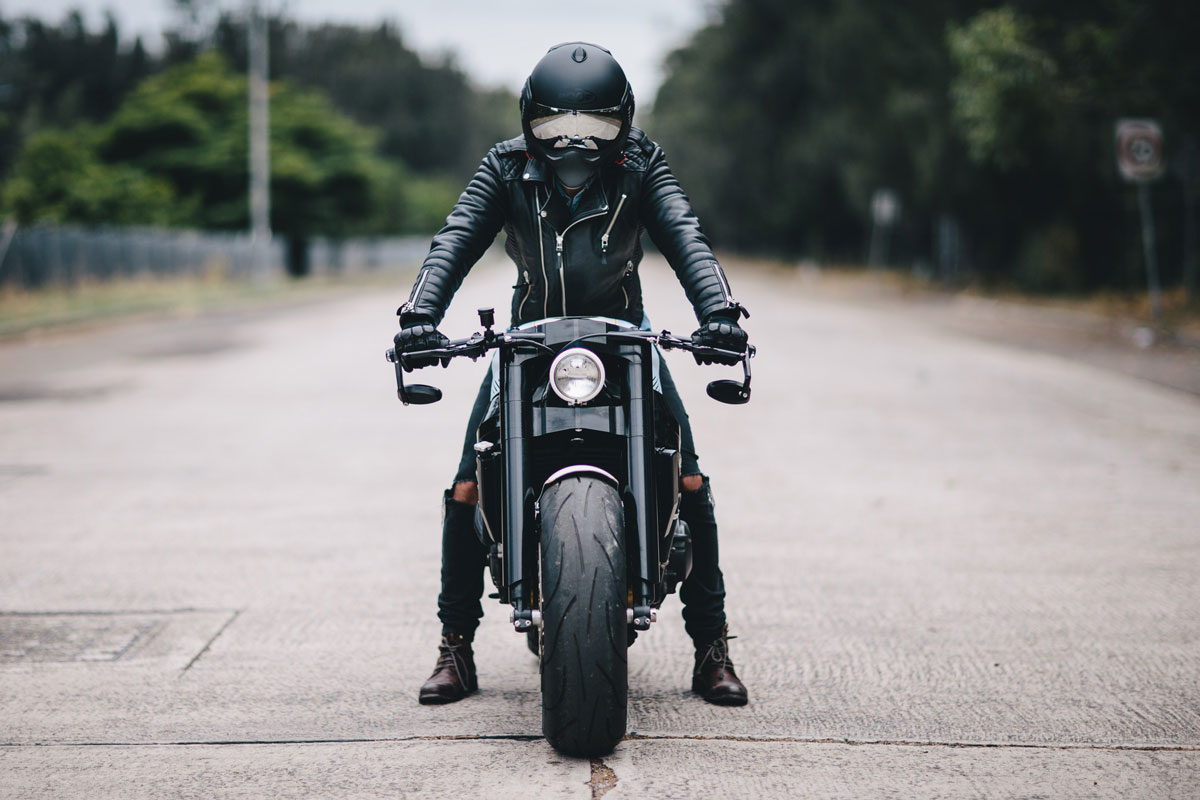 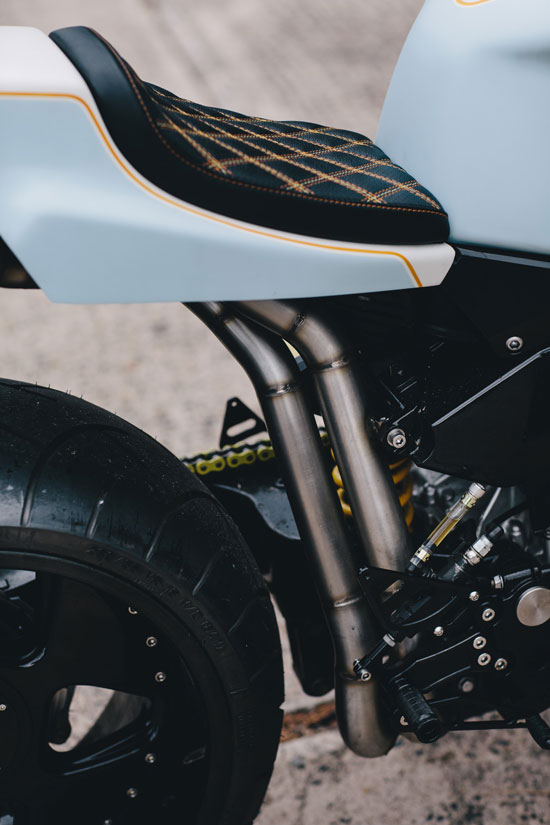 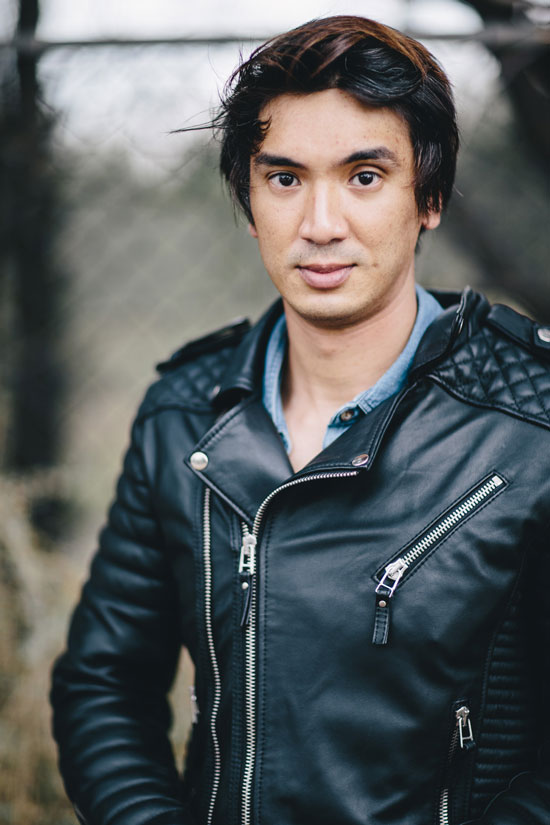 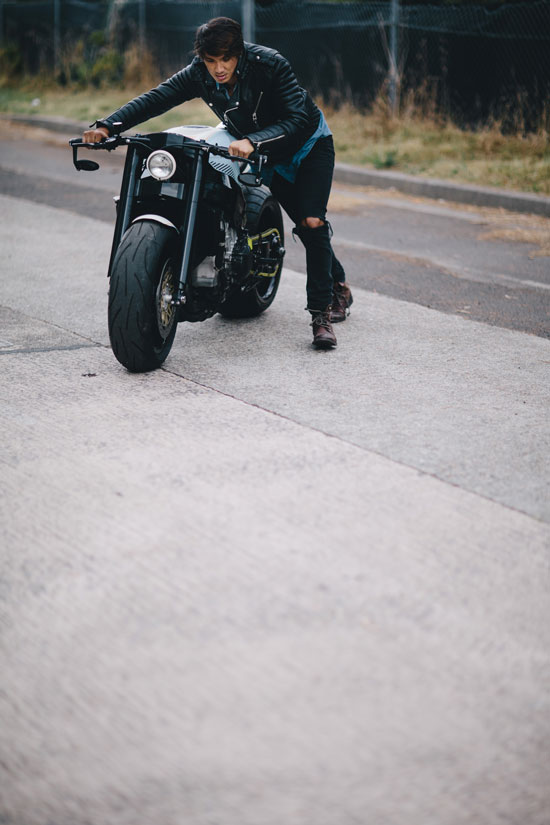 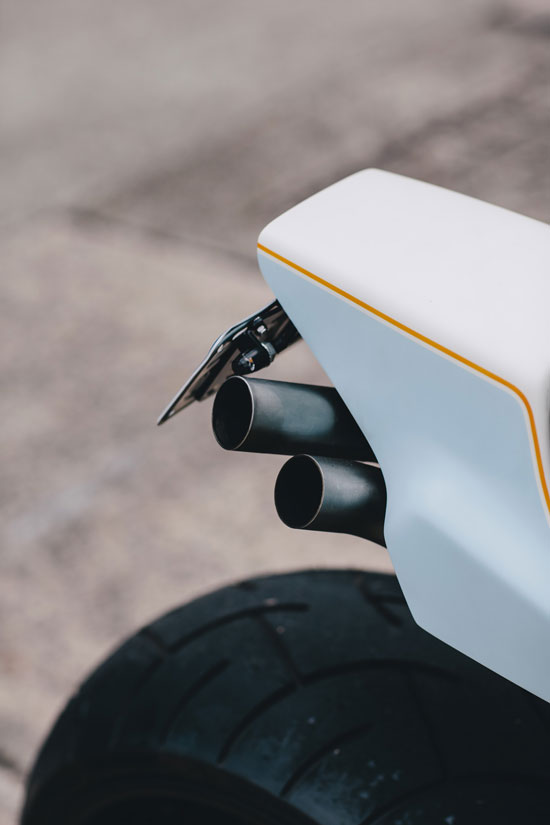 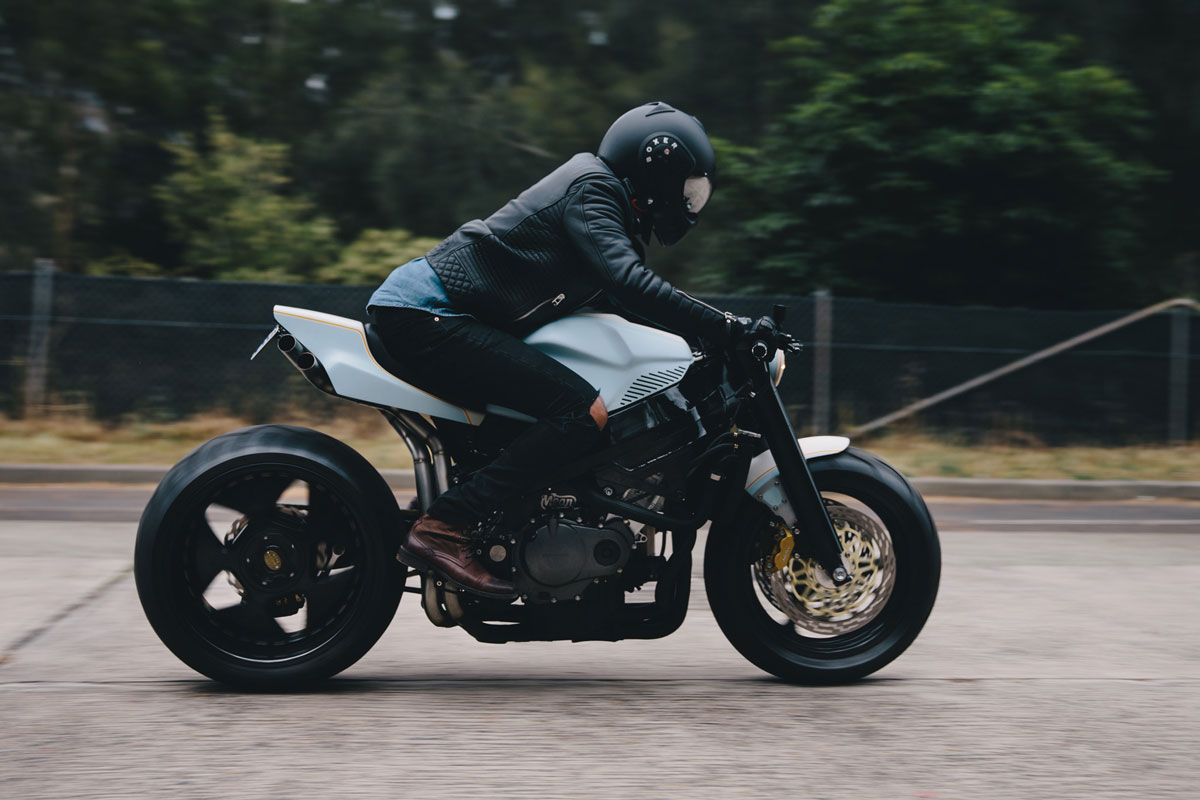