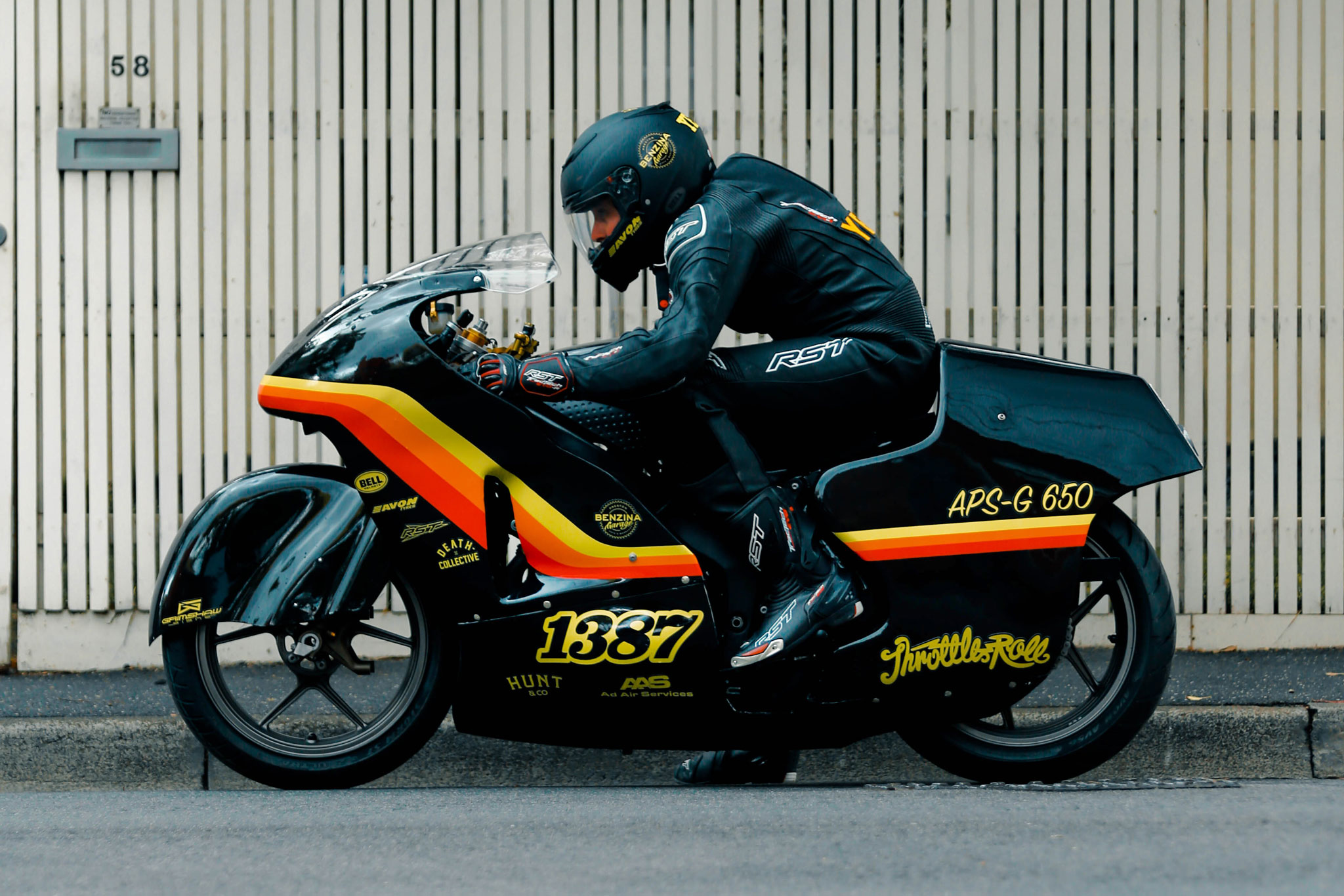 “Every now and then, you need to do something that scares the shit out of you”. These wise words are applicable to everything from asking out that special person, to leaping out of a plane. For Mitch who is the genius/madman behind this mantra, it’s been about building a terrifying speed machine.

This Kawasaki ZX6R 636 has been created with the goal of making it to the great white dyno that is Lake Gairdner in South Australia. There, this machine is charging to beat the A-PS G 650 class land speed record. 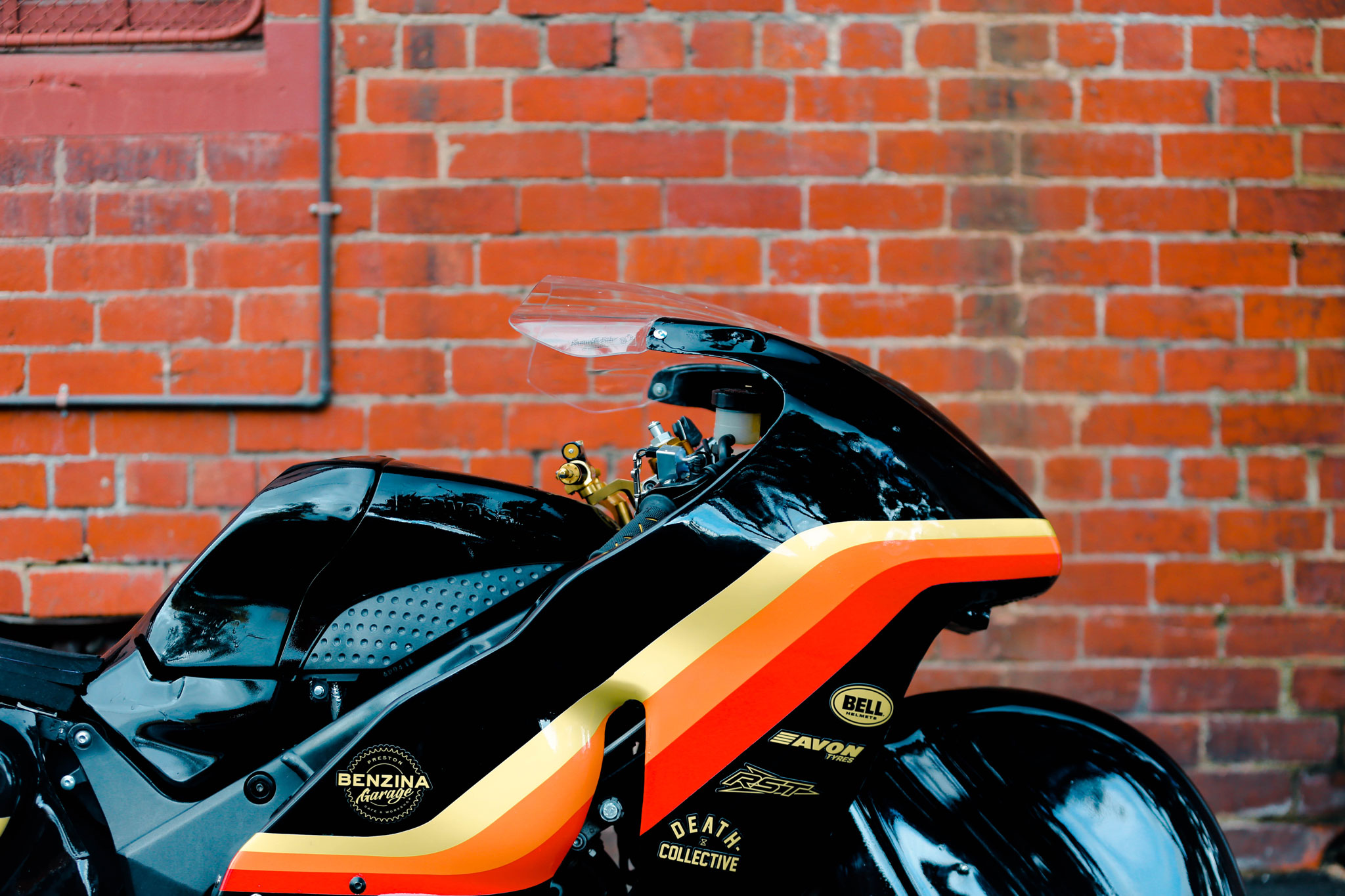 The desire to run a bike for Speedweek 2017 had been planted in Mitch’s head since he was young. My neighbour at the time was Chris Bryson who had a couple of very competitive Hayabusas that were pretty wild. He still maintains a handful of records. I’m pretty sure everyone that watched the film The Fastest Indian let the cinema with intentions of hitting the Salt Flats. For me, I had my neighbour who owned a real life salt racer, so the sound of that machine idling away in his workshop was enough to truly cement the idea for me.”

The last of the Kawasaki 636 motors, Mitch and chose this 2006 Kawasaki ZX6R 636 after much consideration and even more beers. “We decided this would be the best engine to start with purely as it already have more capacity than the other 600’s around.” 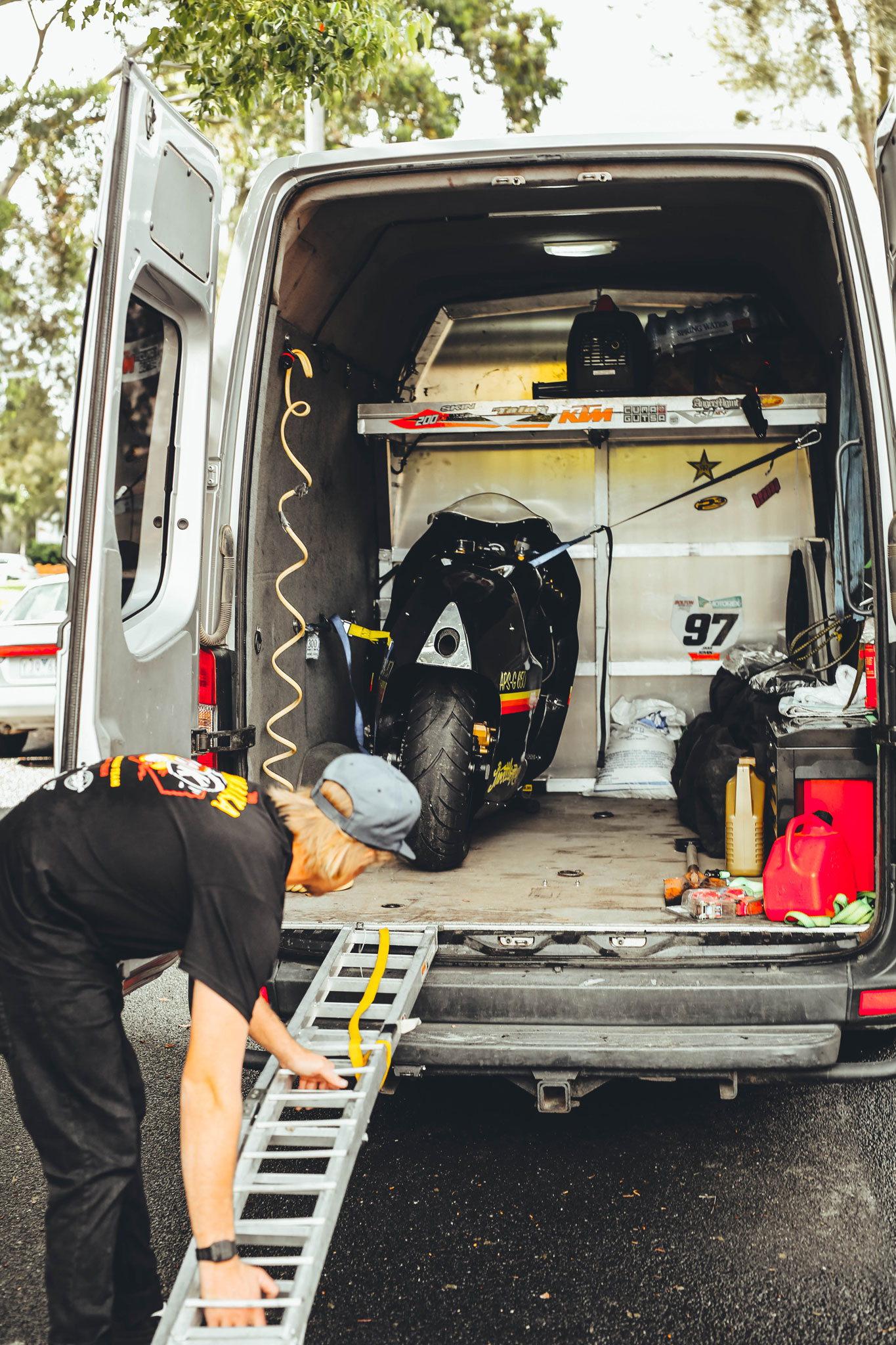 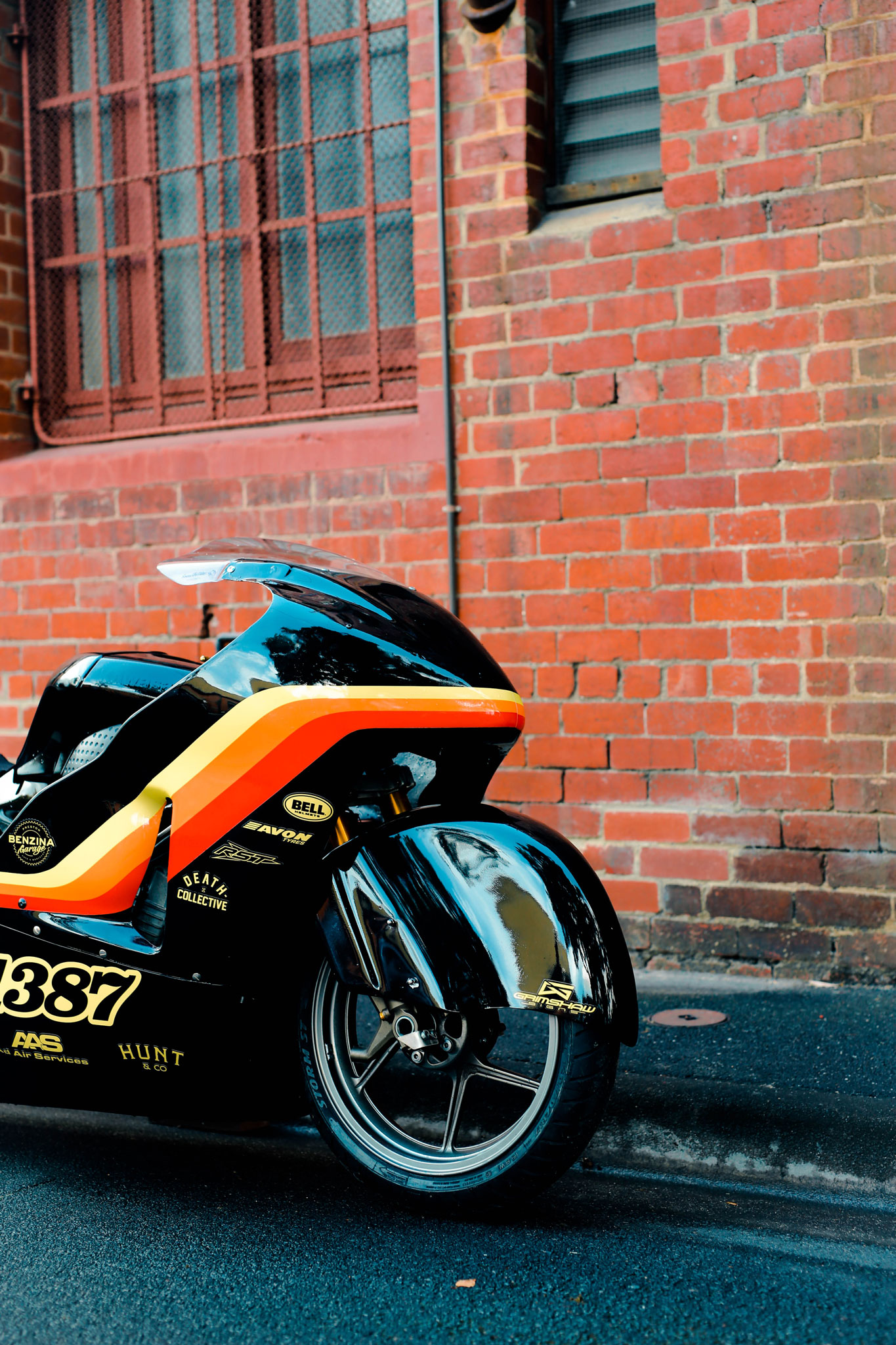 The urge to build a machine, and go as fast as this engine and wheels would take him in a straight line would be a somewhat different style from Mitch’s previous Moto history. Growing up, his Dad raced Enduros which of course led to Mitch and his brother being put on trail bikes early on. “Eventually that led to me doing Motocross (much to my Dad’s disappointment) which I raced in for a while, before getting into freestyle Moto X stuff after a mate introduced me to it. That endeavour didn’t last that long before I had a miscalculation in a move and broke my back. This put me off bikes for a year or so, and sure enough I found myself without time or money to continue racing, so it all sort of stopped for me at this point.”

Not to be put off bikes forever, Mitch got back on two wheels further down the track and resumed racing. “I ticked off a few goals and had an absolute ripper time travelling around each weekend and racing. Unfortunately I had to go and grow up – and as anyone will tell you, any form of Motorsport is not cheap. Especially Enduro racing, so I stopped racing. The last few years I have just been fiddling around with different bikes and have started to enjoy the customising as much as I do the riding of them.” 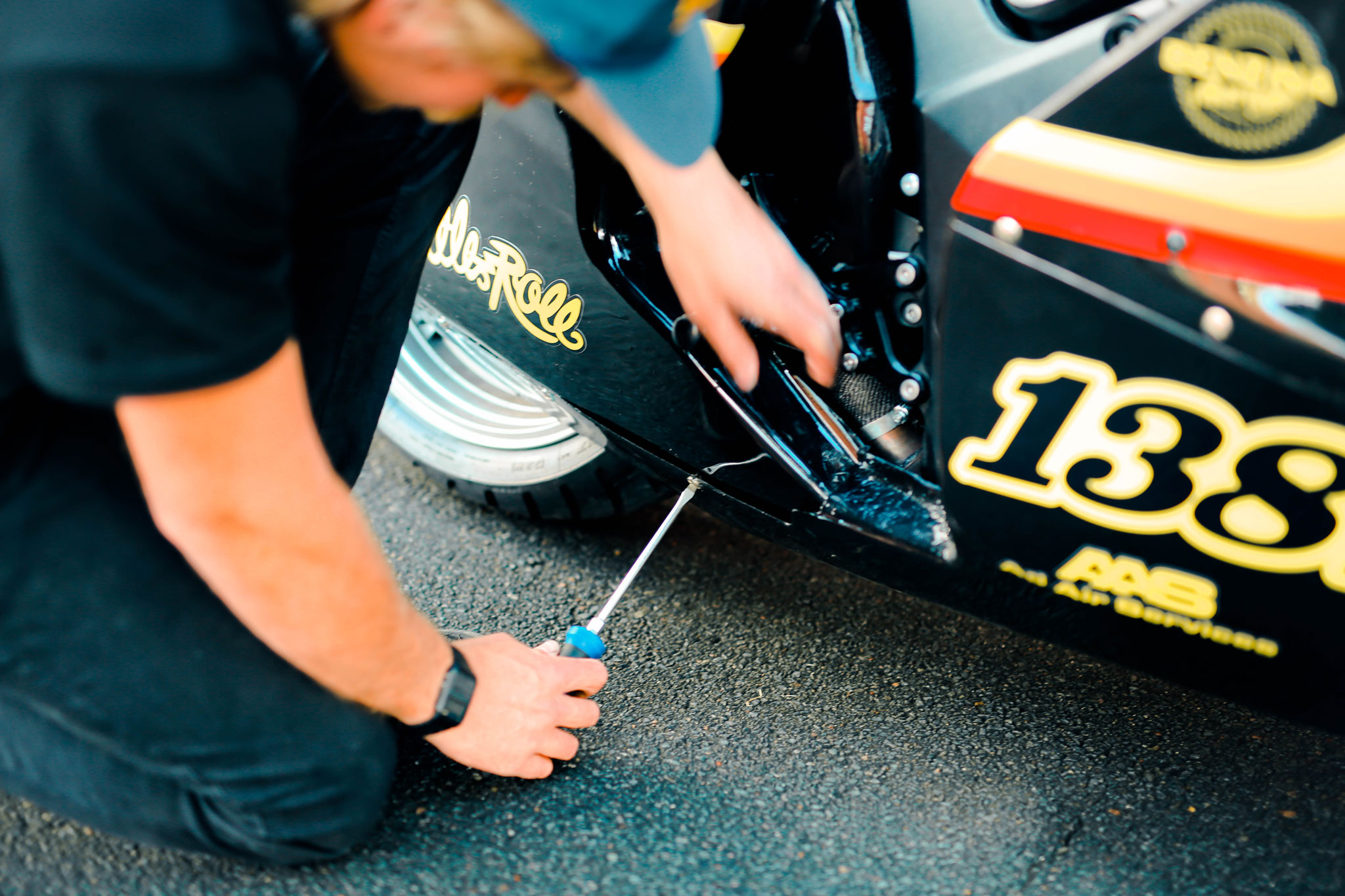 The salt flats would be all too perfect now for Mitch’s (slightly) matured lifestyle. “It seemed like the right time to do the salt bike, I haven’t got the time to go training and racing like I used to, and with the salt bike there isn’t much training involved. I can just sneak out for a few hours a night and work on it and still be home on the weekends to work around the house and do adult stuff.”

With the donor bike on the bench, the work began by simply getting the machine eligible for the standard class. Before long, more and more work was being put in to what is now an A-PS G 650 class bike, or Altered Partial Streamlining 650cc bike – basically an Altered (do what you want to the bike) Partial Streamlining (still a “sit on” motorcycle) Gas (98 Octane fuel) 650 (up to 650cc). The motor is unmodified, but features a new exhaust with DNA filter attached with the original ECU being re-flashed. “We didn’t want to bother with the motor until we gave it a test to make sure it goes straight, and is slippery enough. The thing with Speedweek is, its only once a year and there basically is no way to test any of the components properly until you are there.” And so, the first race day this coming weekend will be the first time Mitch will get to ride his creation in it’s current form. 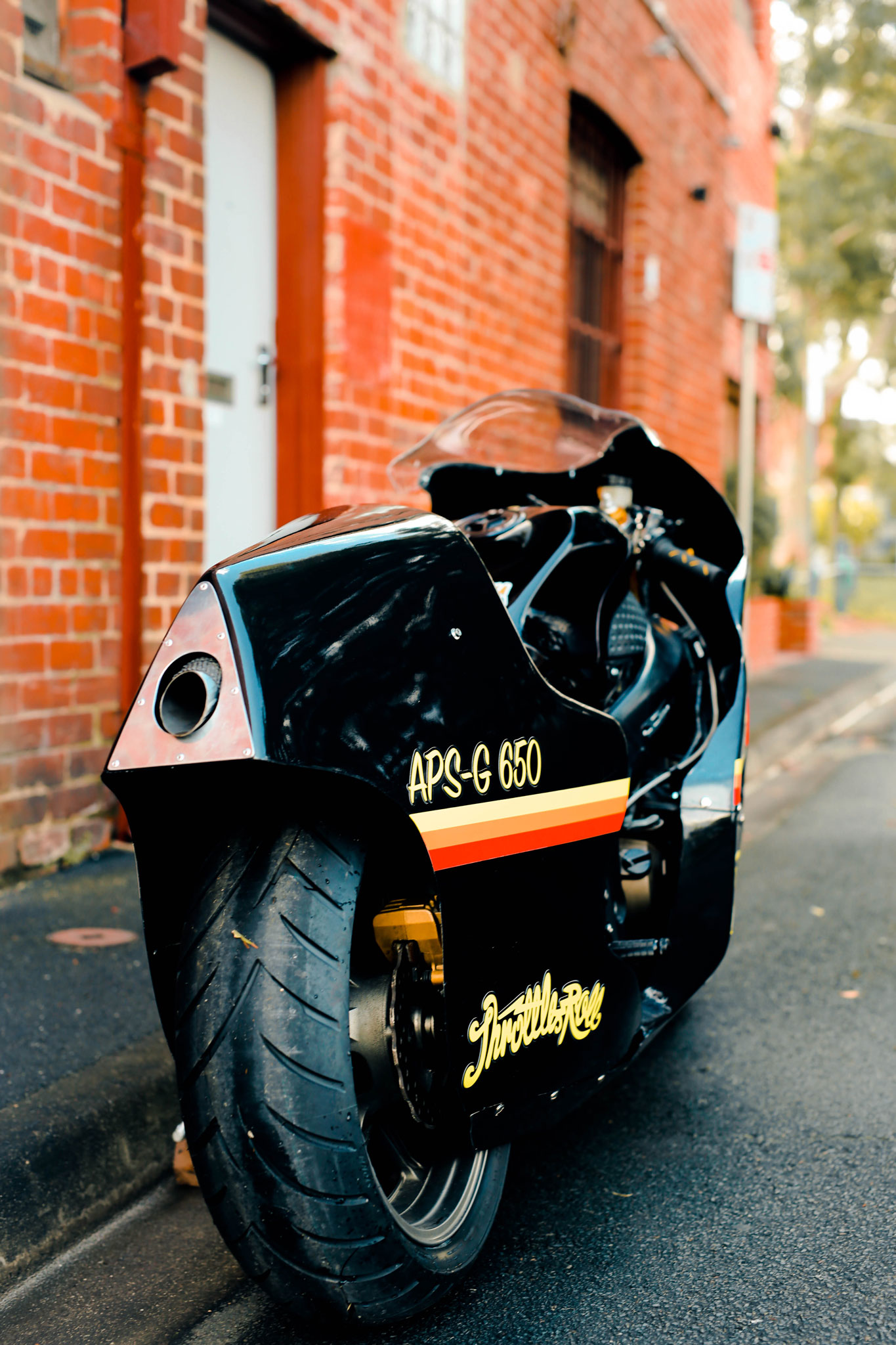 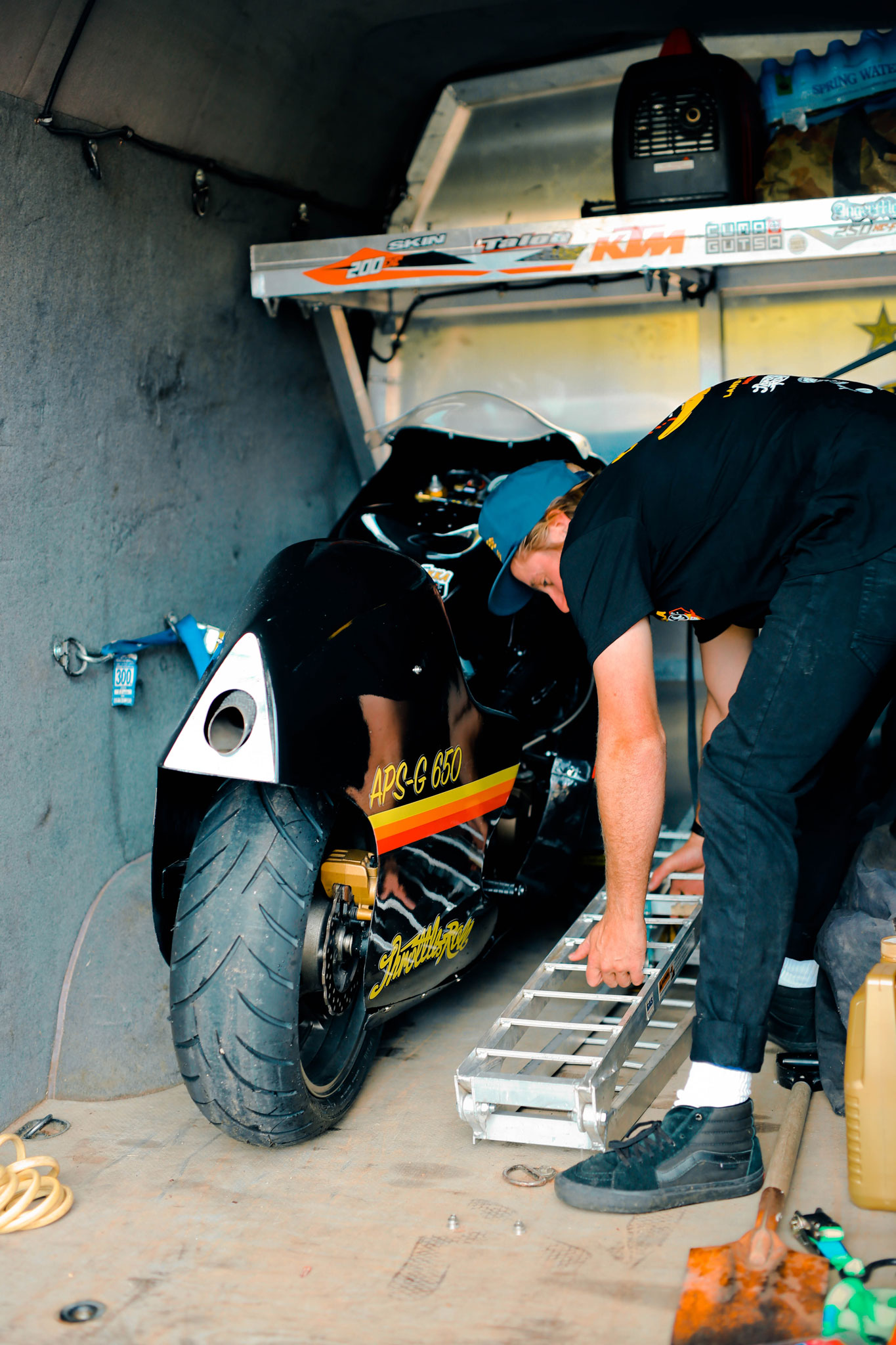 The standout visually for ‘The Kwakka’ is no doubt it’s “Charlie’s Toy” fairing which as originally created for Hayabusas. The entire unit had to be cut and modified to fit its new designation. “Most of the work has been done in my little garage, included the suspension and exhaust. The front end was lowered, and Rex Wolfenden from T-Rex Racing helped out with the rear subframe for the tail. We threw out the slicks that were on the bike and put Avons on the front and rear. We then removed the front brakes completely and it now operates the rear brake from the hand levers. I eliminated some of the wiring that was not needed, and then modified the tank to create some more space to lay flat while riding it. There are a million tiny modifications that were done, which are hard to remember in the whirlwind 10 month build that got it to this point.” 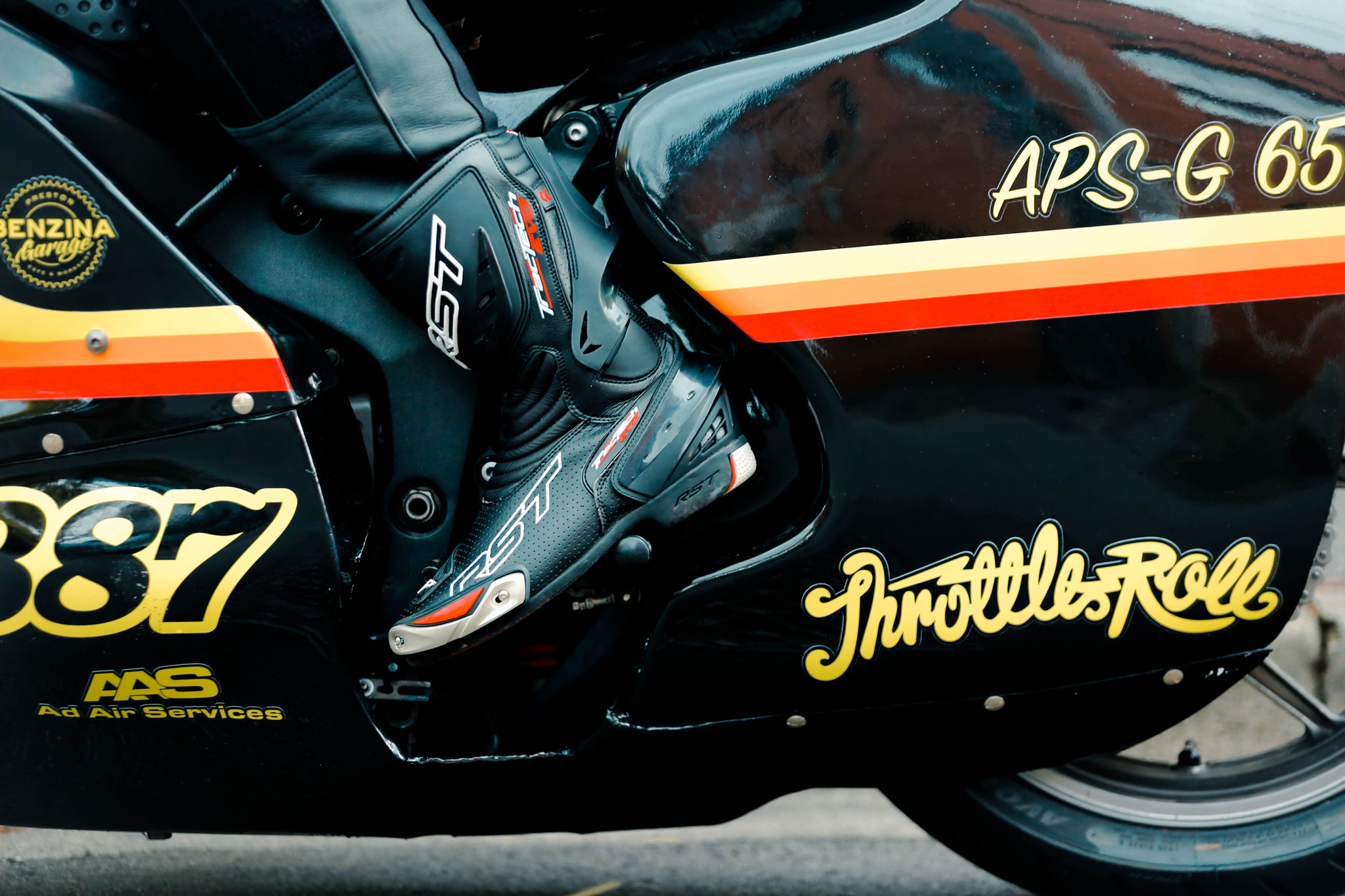 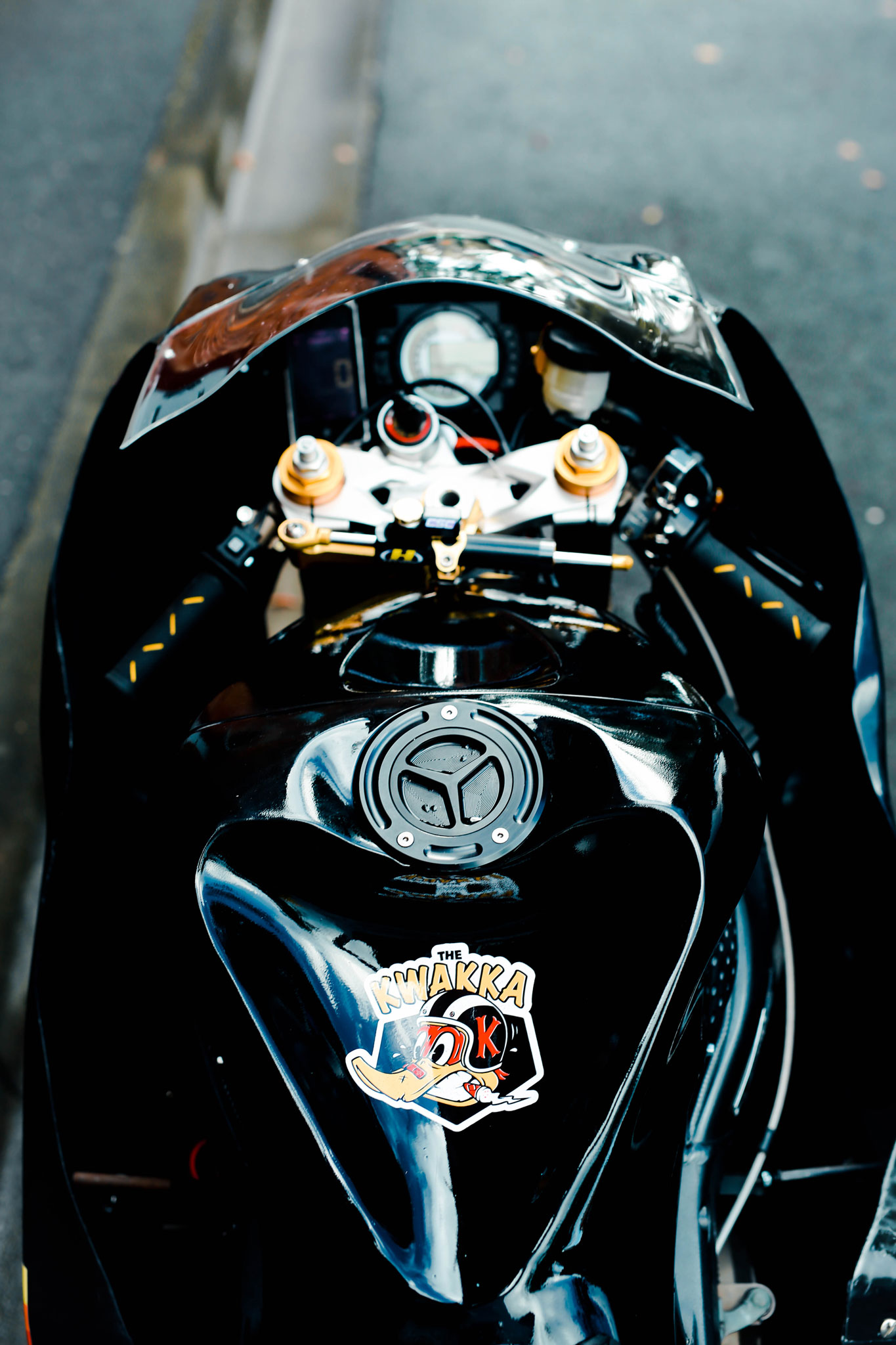 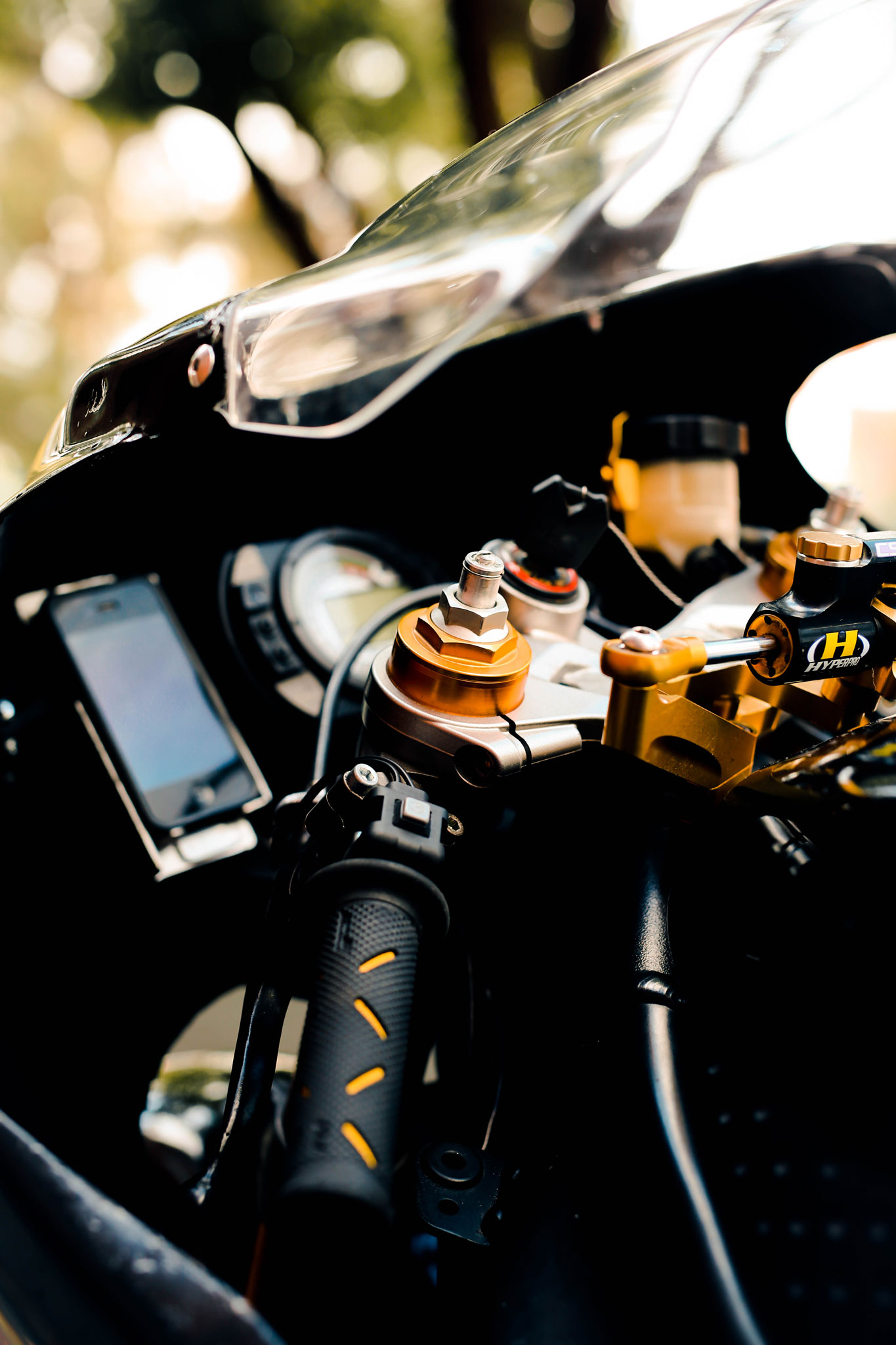 “I’m not really phased if I set the record or not to be honest, my original goal was to achieve 150mph, the record is actually only about 132mph so hopefully it will be two birds with one stone. I’m actually just more keen to get to the 150mph mark. It doesn’t sound super fast, I know I have gone faster than 132mph with my girlfriend on the back on my old Yamaha XJR1300, but the difference is the actual salt. The salt lake is not a nice hard smooth bitumen road, it’s almost a dirt road and depending on the weather it can be very soft and your feet actually squish into it as you walk. This takes a fair amount of horsepower out of the bike and then also induces wheel spin and in turn drops the speed. So to do a good speed out on the lake becomes pretty difficult with all of these factors.”

“Big thank you to Throttle Roll for the support, Benzina Garage, Bell Helmets, RST LEATHERS, Avon tyres, DNA Filters, Hunt & Co, Death Collective, Grimshaw Signs, MATMAC Media, my Dad and Chris Bryson for all of the help and time. Oh, and a shout out to my girlfriend Megan for putting up with the noise and the stressed out, tired, absent boyfriend.”

To help keep the Kwakka Kwakin’ along, a limited edition T-Shirt is up for sale with all proceeds going to fuel this ambition. Click Here or miss out!

More to come once ‘The Kwakka’ has hit the salt, stay tuned! 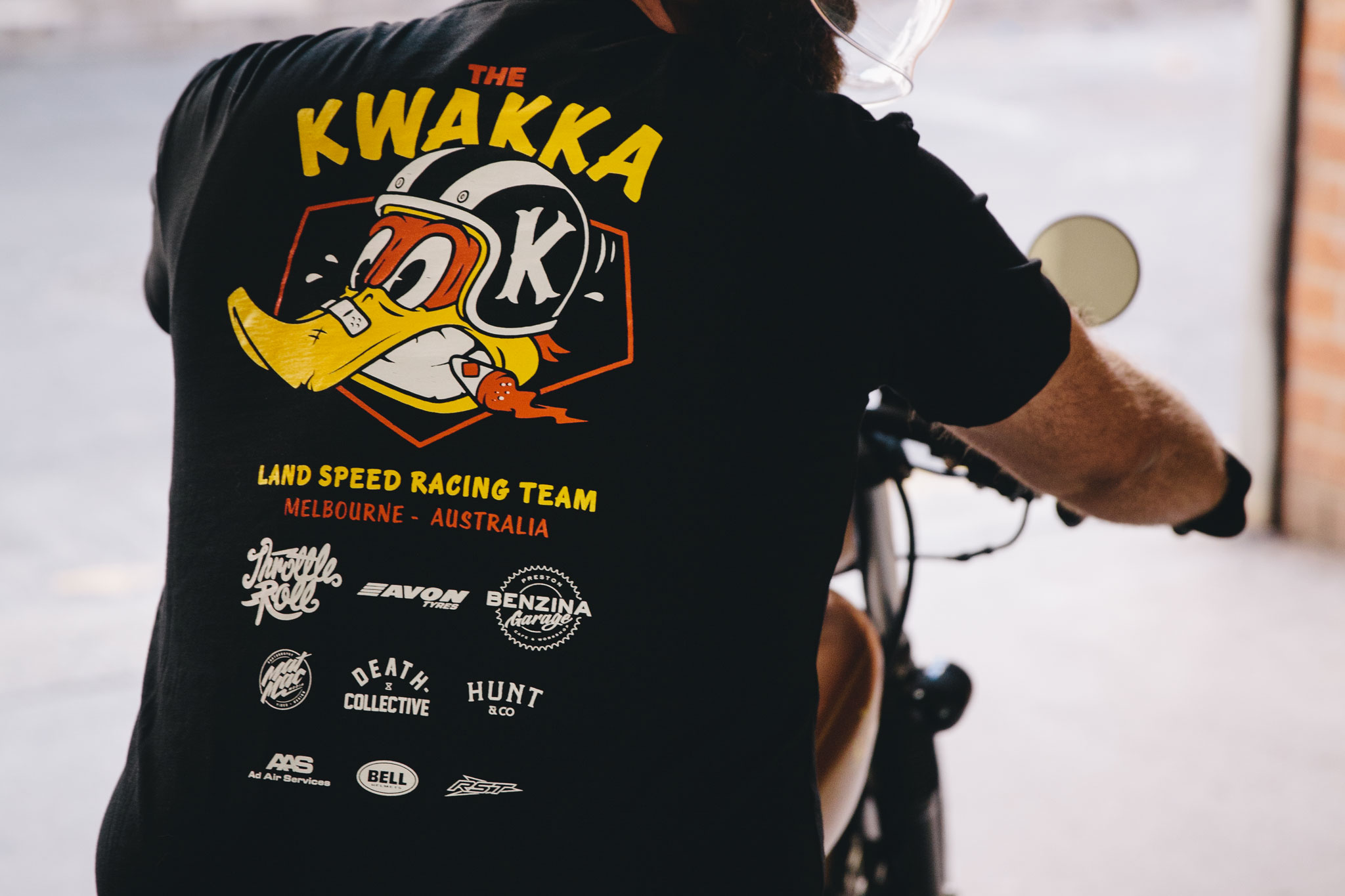