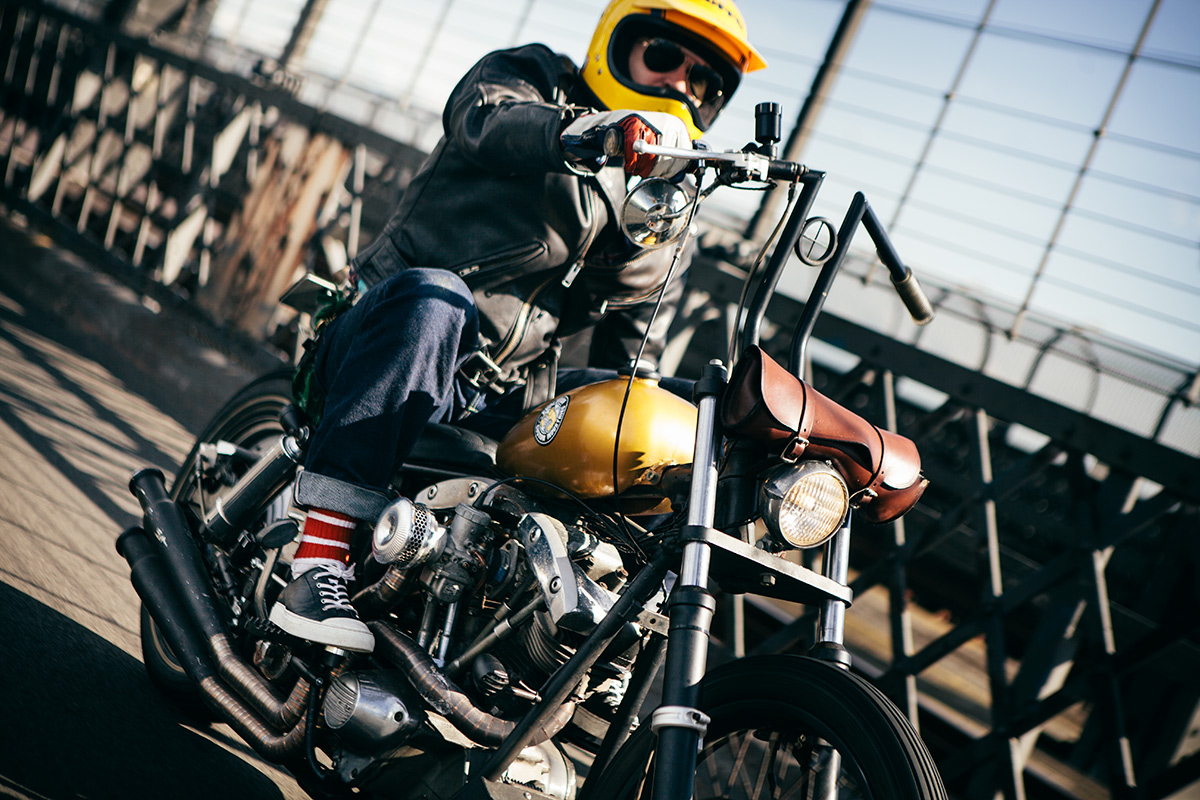 Rumour has it that he is the spawn of a chance encounter between a boozed up biker and an art freak chick from outer space, both high on mescaline while they were catfishing in the Deep South. Of course not much can be taken with this rumour, particularly since our resident ink slinger and doom bringer, Jed, actually was born and raised in the town of Taree, Australia. 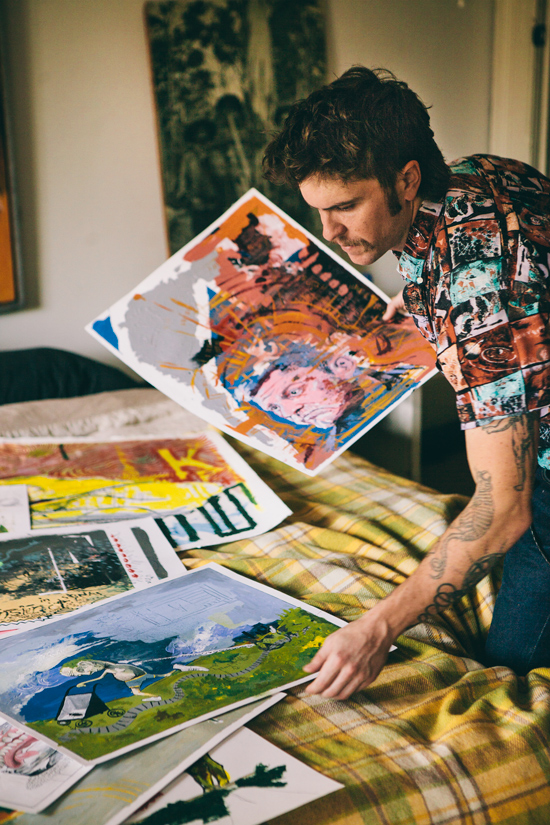 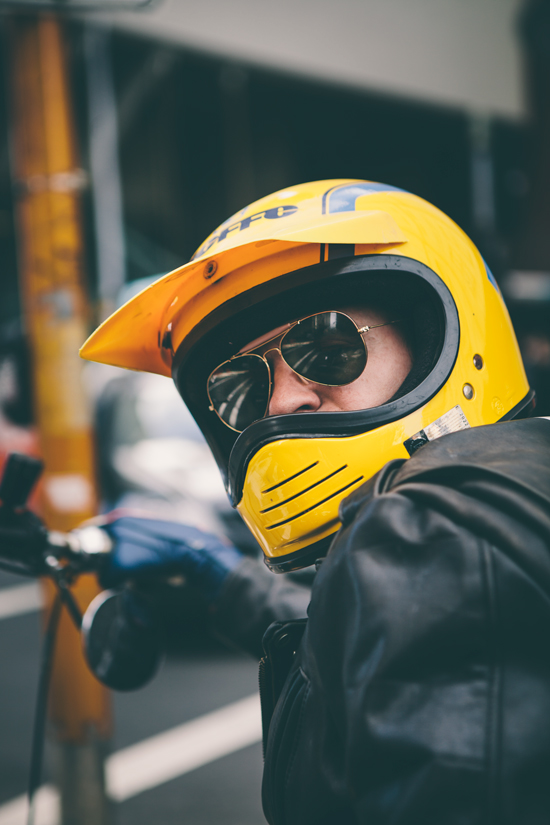 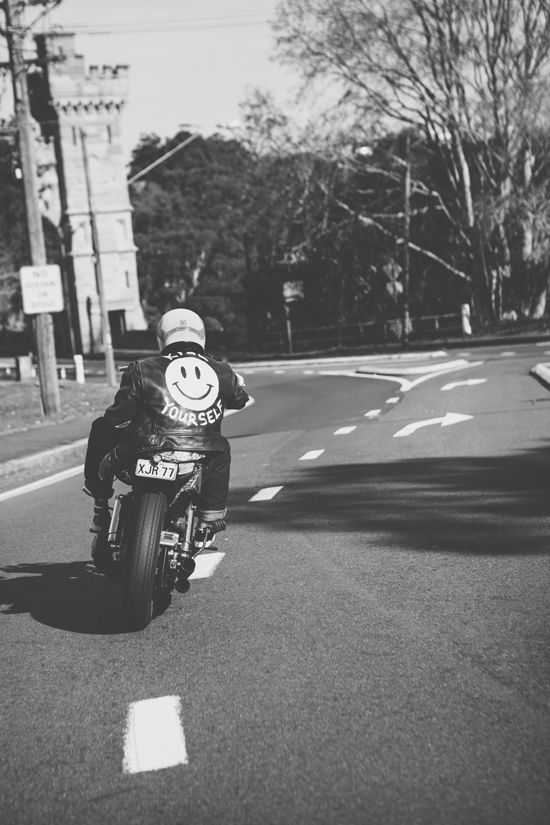 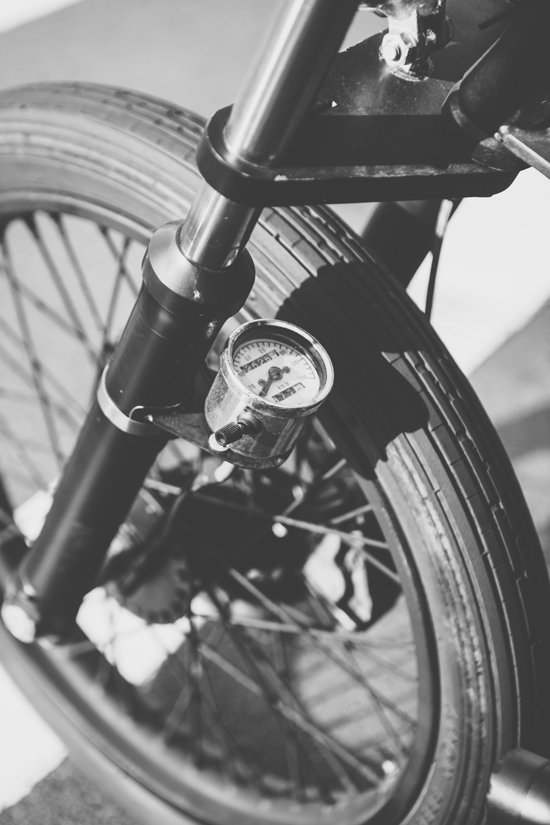 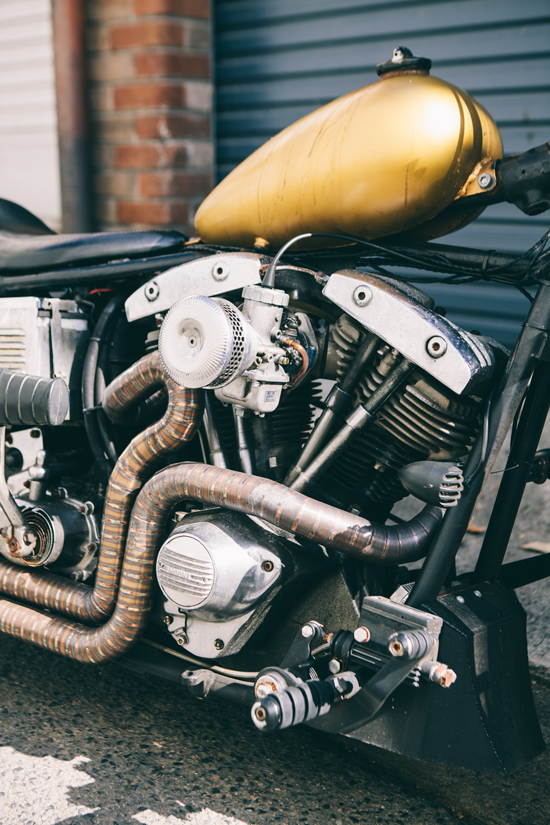 But that’s enough rumours for now. Let’s get factual. Jed is a man of many talents, a brief waffle through his impressive portfolio will attest to that. Jumping on the 2-wheeled saddle when he was a young lad on shitty old farm bikes, he currently rides a deadly looking Harley-Davidson ’77 FXE Superglide. Evolution Customs did the work on this bike, and there’s a lot of it. The frame was de-raked to standard, crosshairs on the handlebars are used to mark any enemies (aka Sydney Taxi drivers) The pipes are a welders wet dream (or nightmare, it’s hard to say really) that perfectly contour throughout the bike. They comprise of 108 individual pieces!

Jockey shift, foot clutch and high mid controls make sure riding this bike is interesting. Lowered front forks, moon rear wheel covers you could eat a meal out of, there’s a lot to love on this bike. Customisation isn’t stagnant, with a 70’s aftermarket swing arm that has adjustable settings, allowing you to raise or lower it depending on what look you’re after. “I have mine set high, ‘cause I like to be able to lean into a corner. All the choppers are getting lower so I thought I’d go the other way” 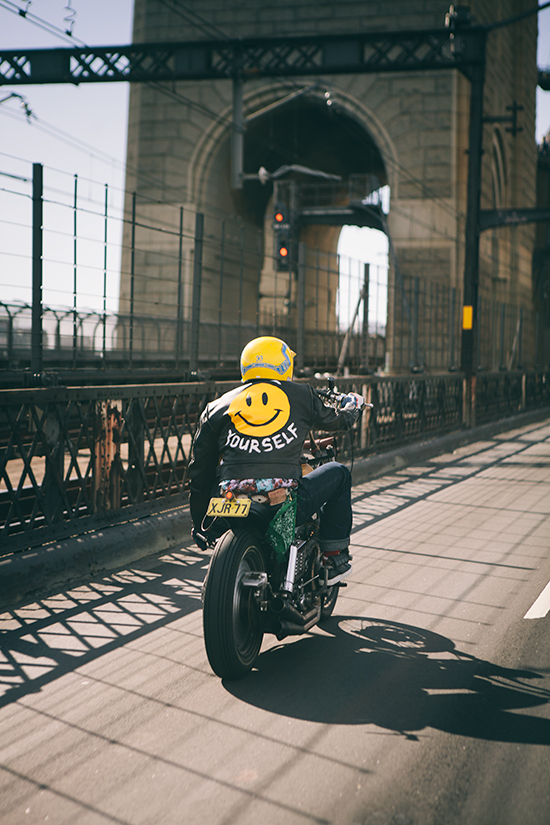 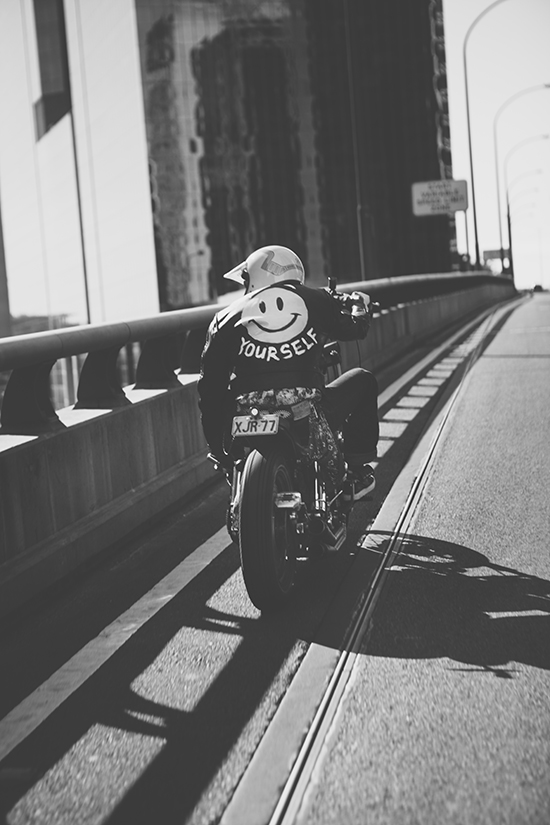 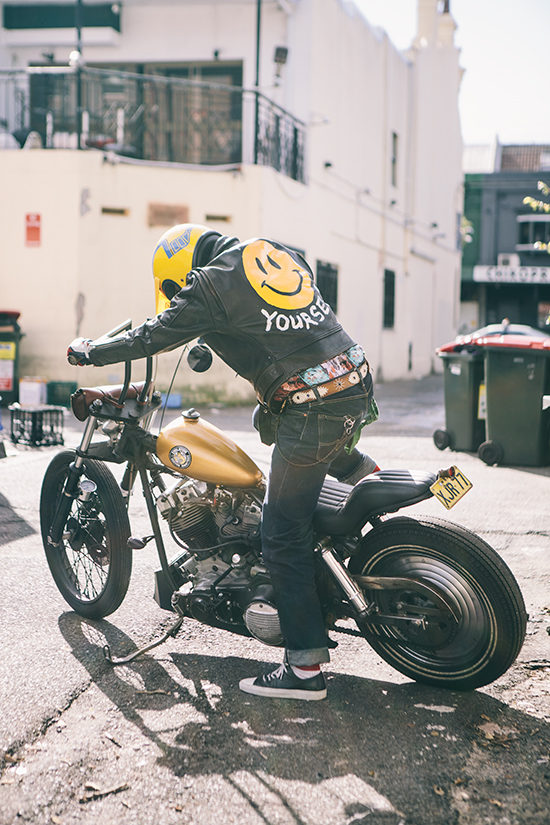 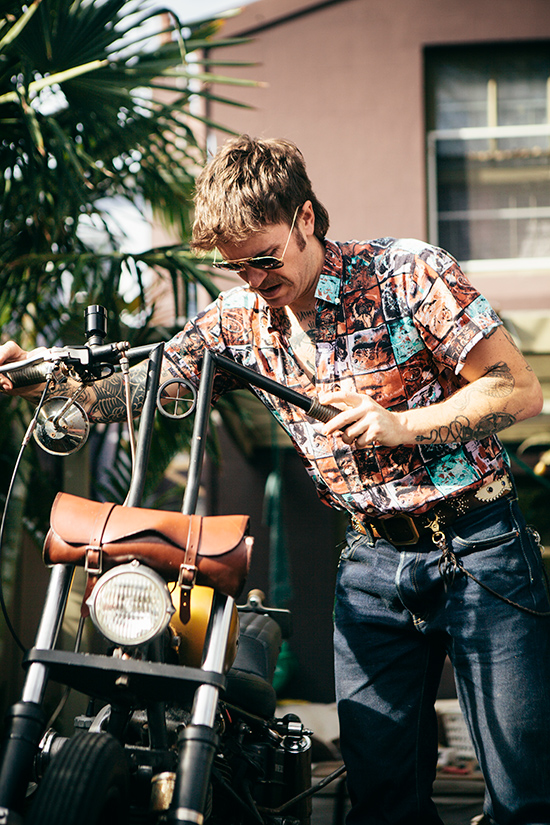 A sometimes shiny, sometimes grubby, golden peanut tank sits decadently on the frame, reminiscent of the lone gold tooth in some old boozehounds gullet. “It’s engaging to ride, sounds tough, keeps me broke, doesn’t handle all that well, doesn’t go all that well, and stops sometimes. It’s gruff and mechanical; if you don’t watch yourself, it’ll bite” Jed’s honest about his ride, as the bike is with him.

Art and creation is another big part of Jed’s life, “Well I studied Graphic Design, then fell into advertising after college. I worked in that full time for about 13 years” he says, but admits it wasn’t his true passion. He quit the full time work and started doing his own art more, creating a name for himself freelance. His style has a colourful reach, from abstract works, to more traditional illustrations as well as a healthy dabble in the tattoo world, being pretty sterling with the ink machine himself. 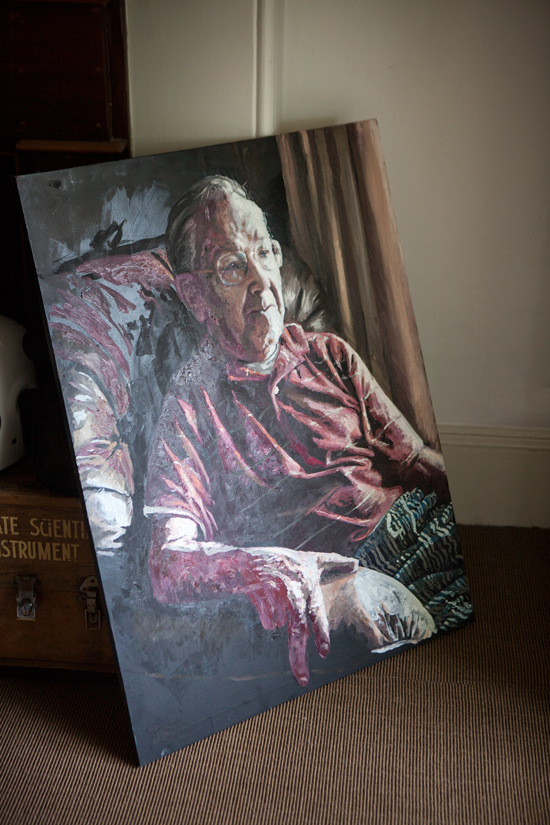 Need more Jed in your life? 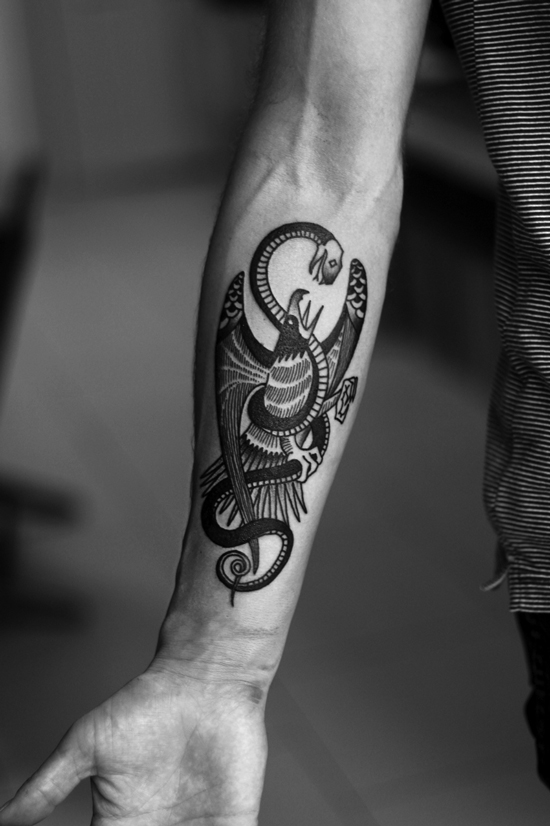 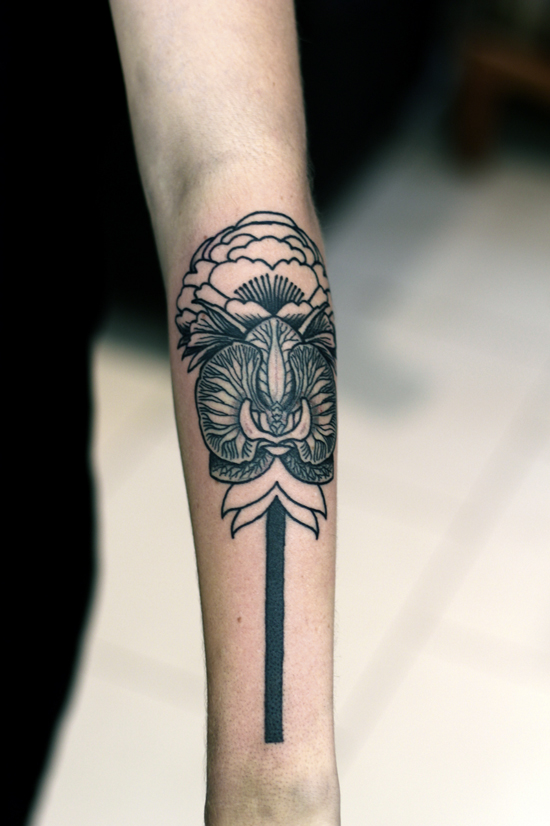 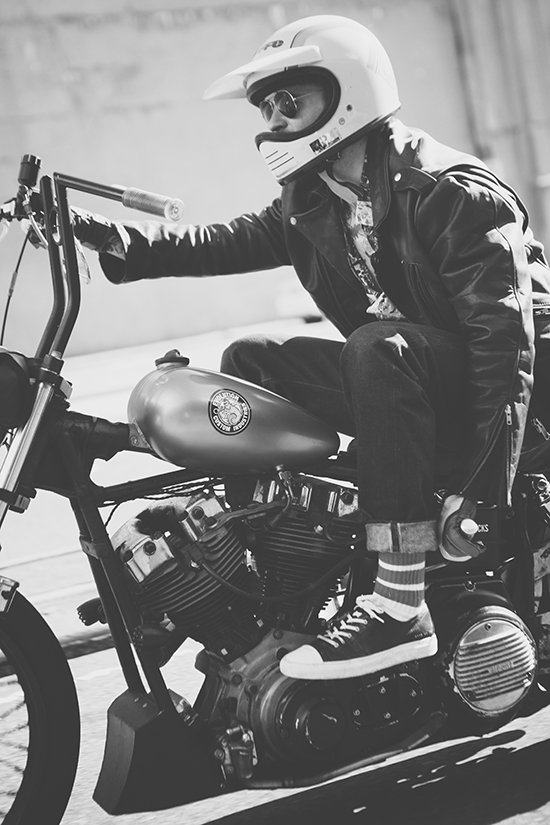 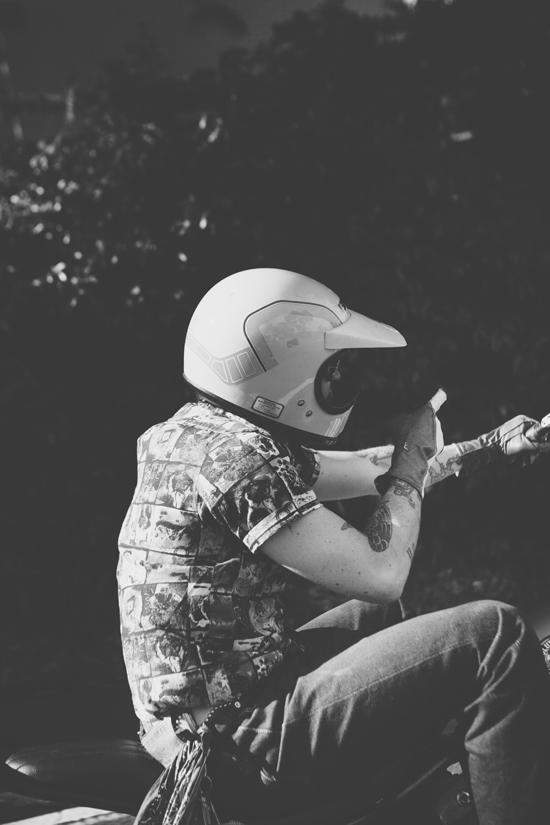