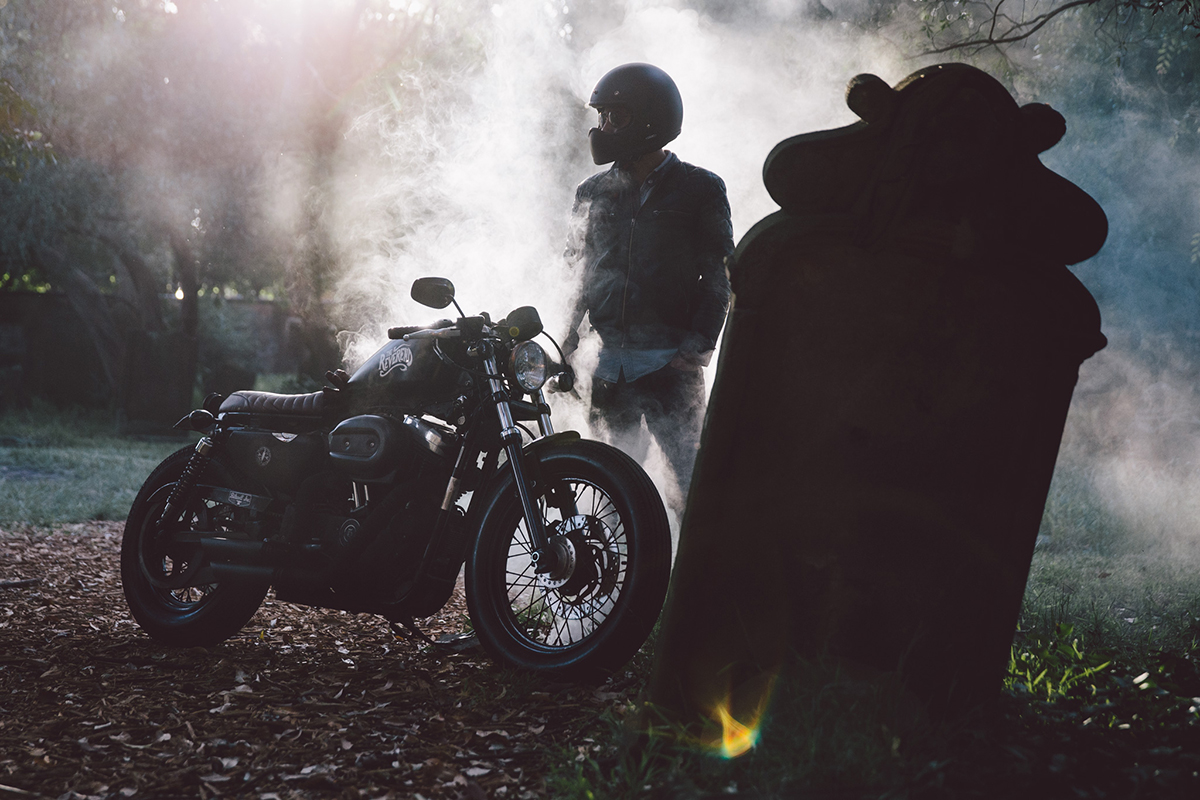 A big, heavy, American V-Twin isn’t the first thing that comes to mind when Café Racers are mentioned, but that’s exactly what pushed Josh to create The Reverend. This is a dark horse of a machine – a cruiser with café racer influence. 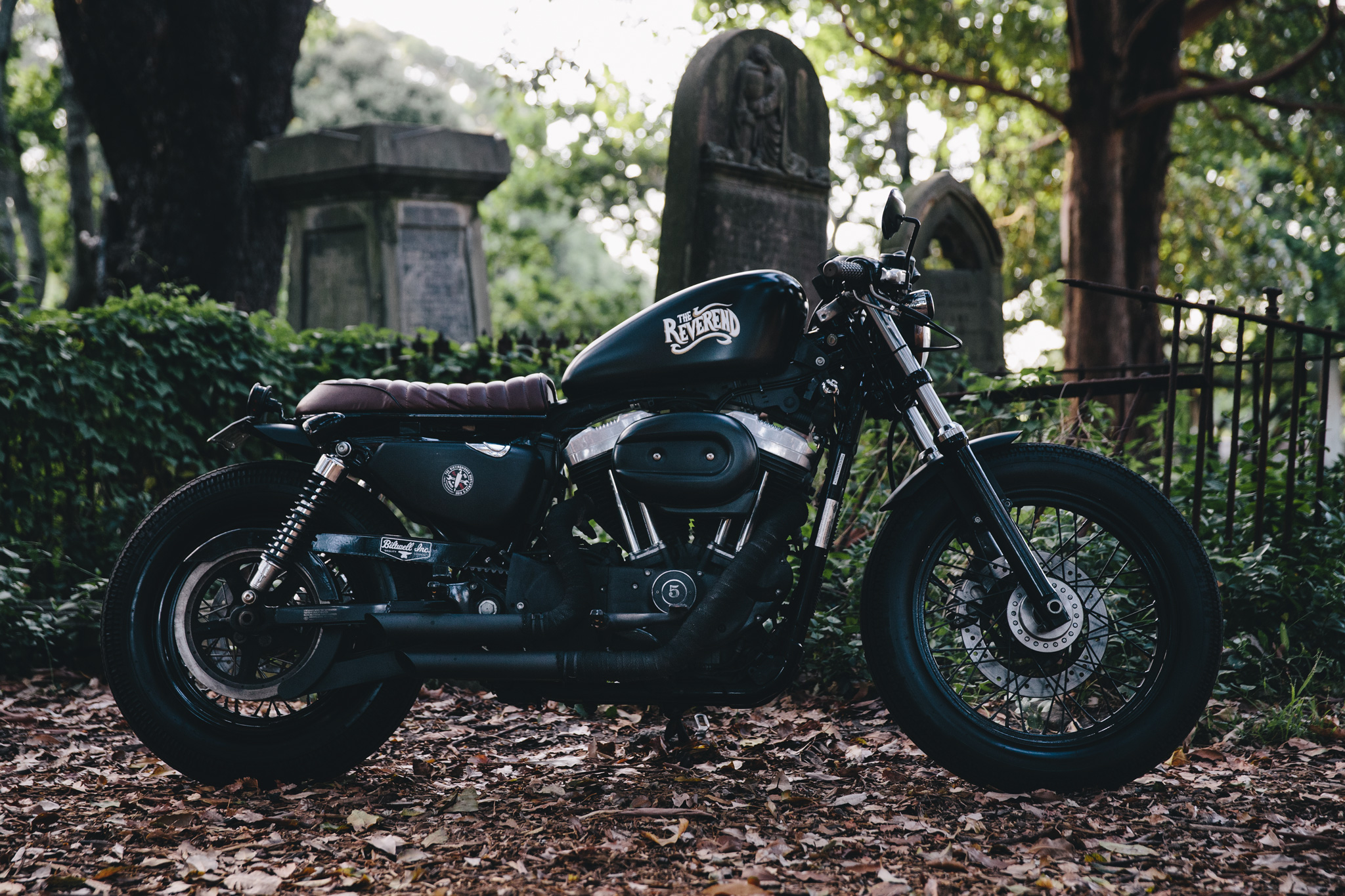 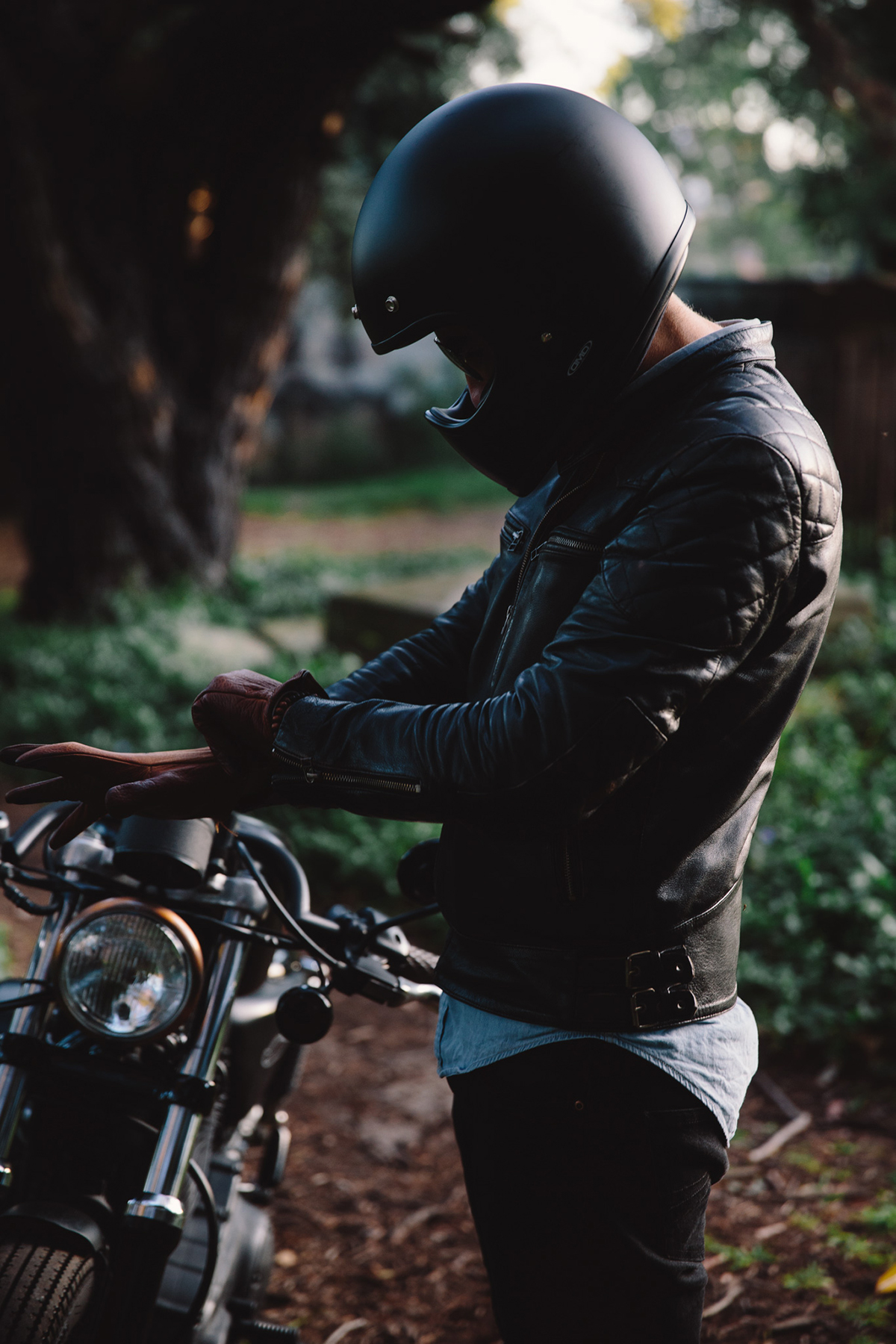 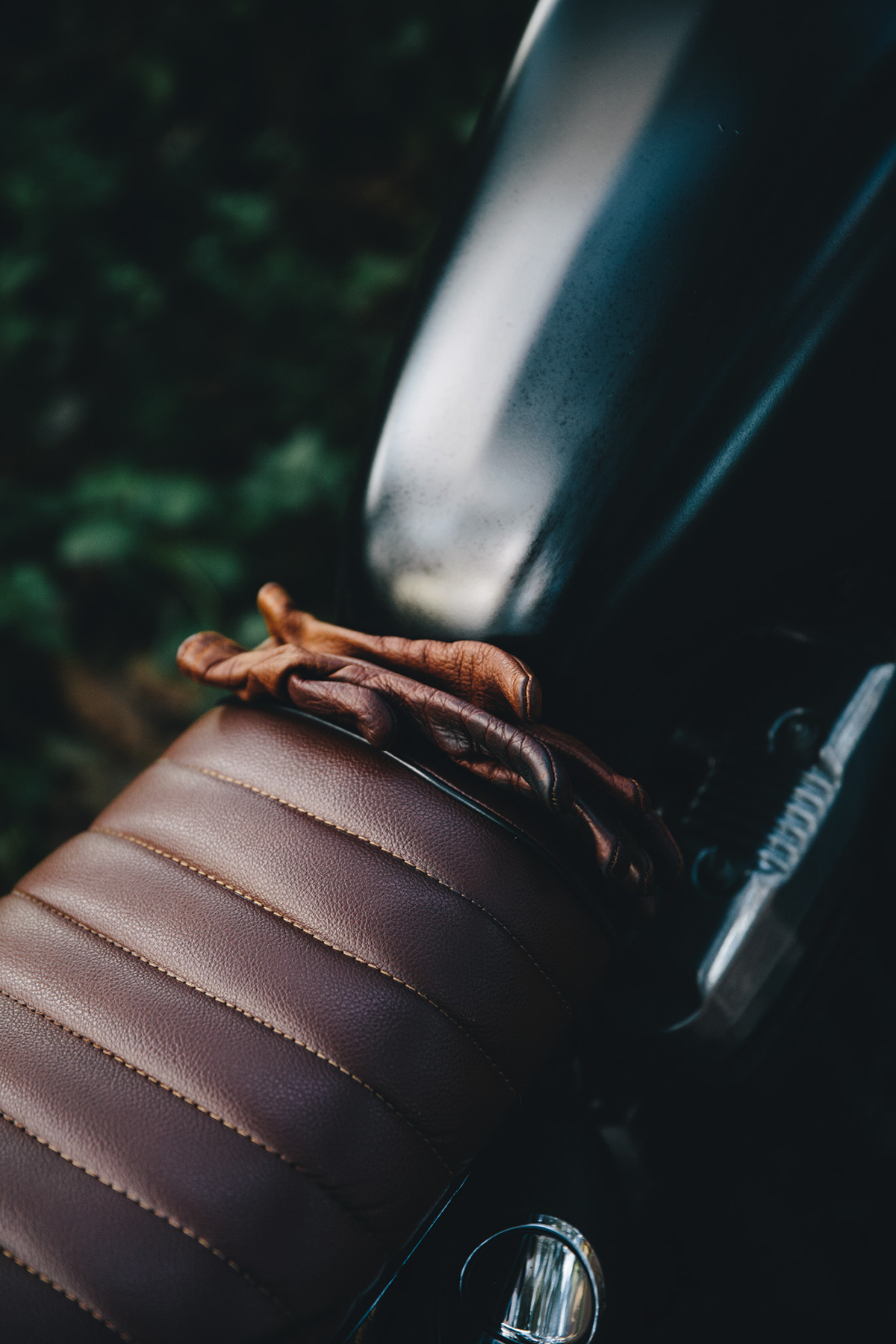 Inspiration for Josh’s recent build came in the form of a combination of two of his favourite bikes. The first being a Honda CB550 Brat build he had seen, and the second a Café Racer styled Harley-Davidson Sportster build by Deus Ex Machina. These two builds would plant the seed of possibility, and sure enough a 2008 Harley-Davidson Sportster XL883 would soon be sitting in Josh’s garage, waiting to be chopped up. “I decided to tone down the original concept a little to reign in the costs, but I wanted to turn a big fat sportster that began all white & chrome (the donor bike’s original scheme) into a blacked out brat/café bike that turned heads and upset Harley purists.” 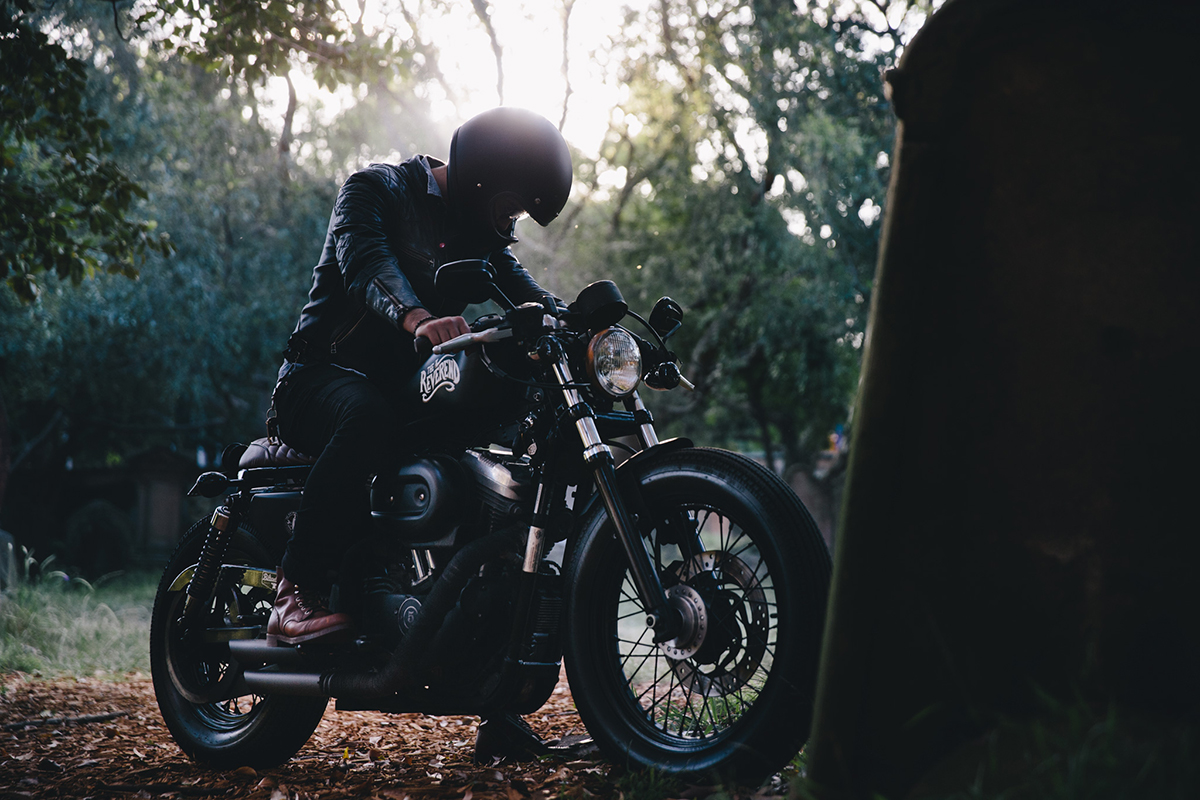 Josh’s love for classic styled motorcycles stemmed some way back, but it would not be fully acted upon until a change of pace and a move into the big smoke. “Seeing classic bikes in movies and on the street certainly always copped plenty of staring from me, but I hadn’t really ever thought about owning one until more recently. I’d moved to Sydney from growing up in the country and the traffic was literally driving me insane! I watched motorbikes roll past me in traffic and it was then that I was convinced; I needed to get on a bike. I told myself it was pragmatic, for functionality only and that I wouldn’t enjoy it and get addicted. As soon as I bought my first bike and rode it for 10 minutes I was completely hooked. It was just a completely different experience to driving a car, and I loved it. I was never into newer cars or newer anything really – I was always drawn to older style things, so naturally café racer bikes became my weapon of choice.” 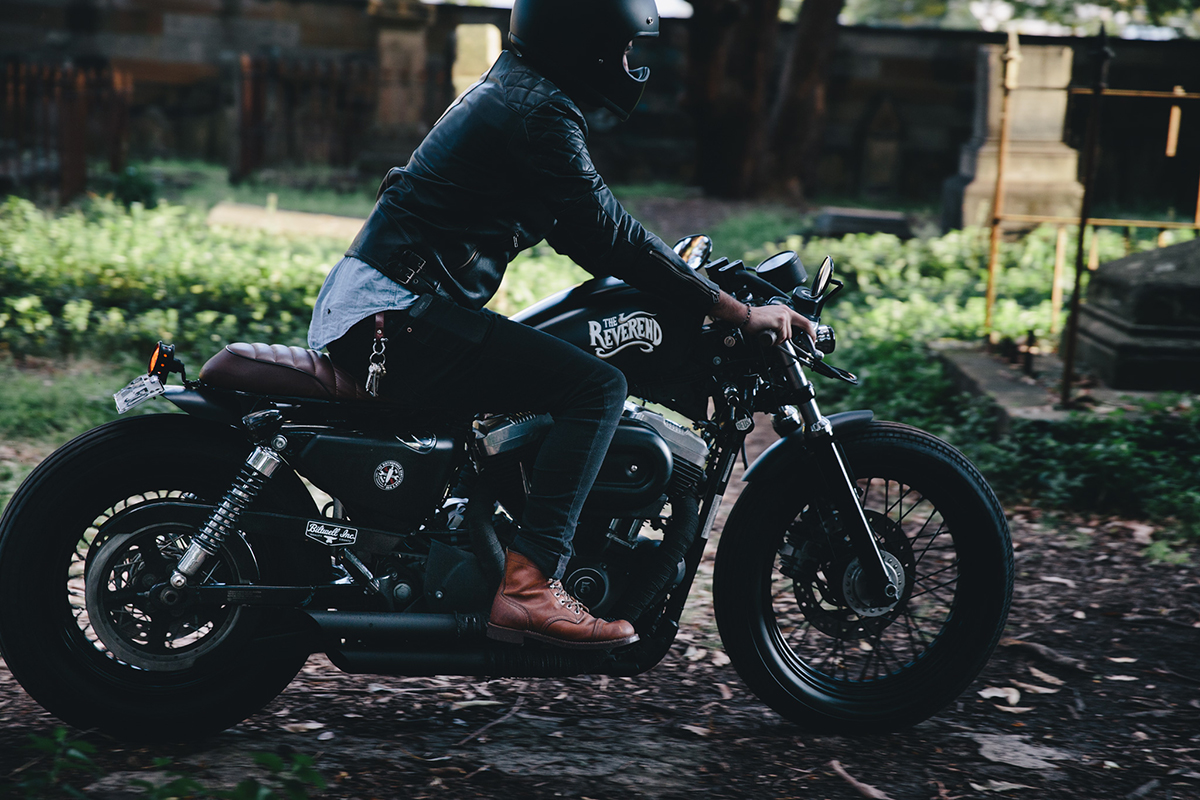 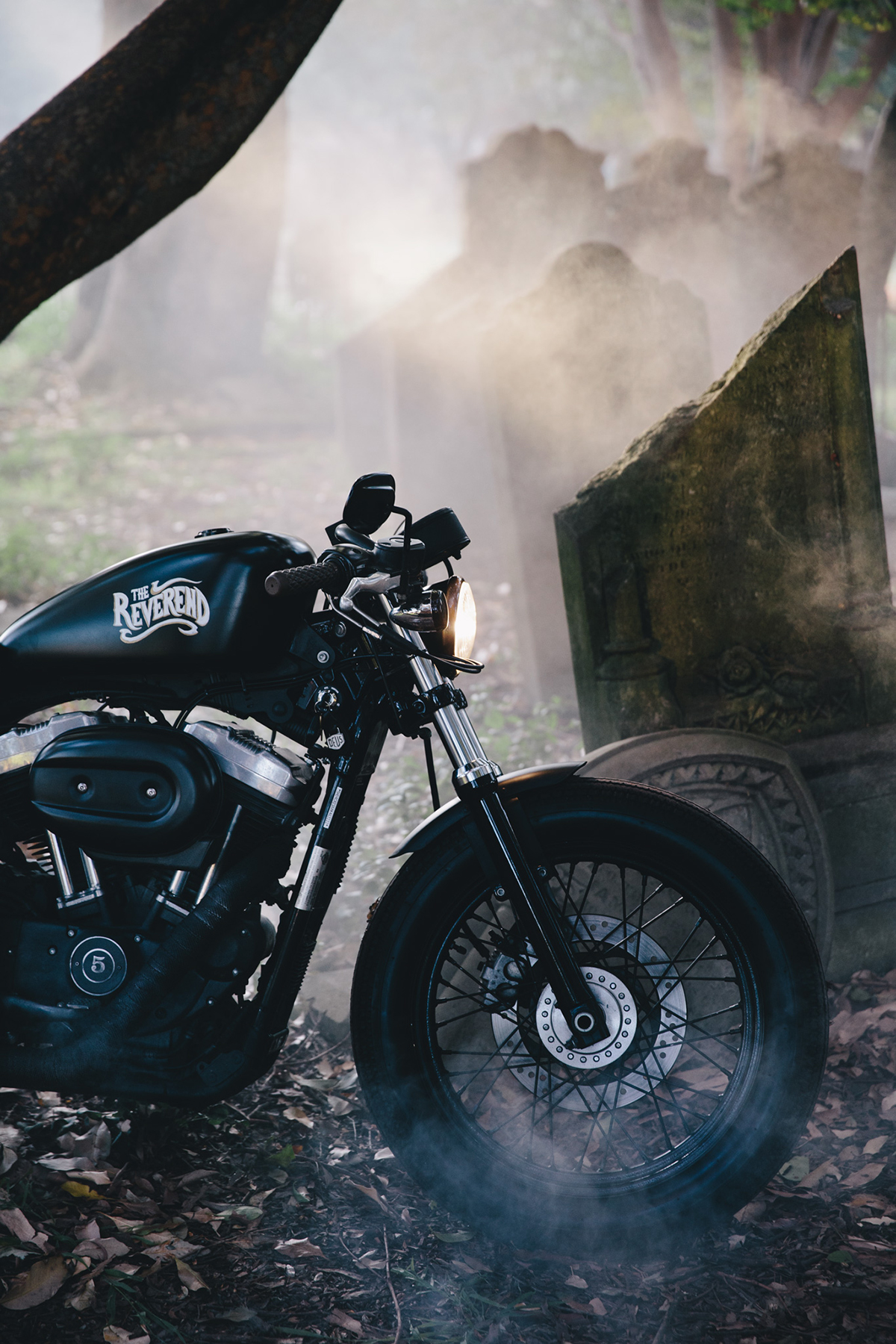 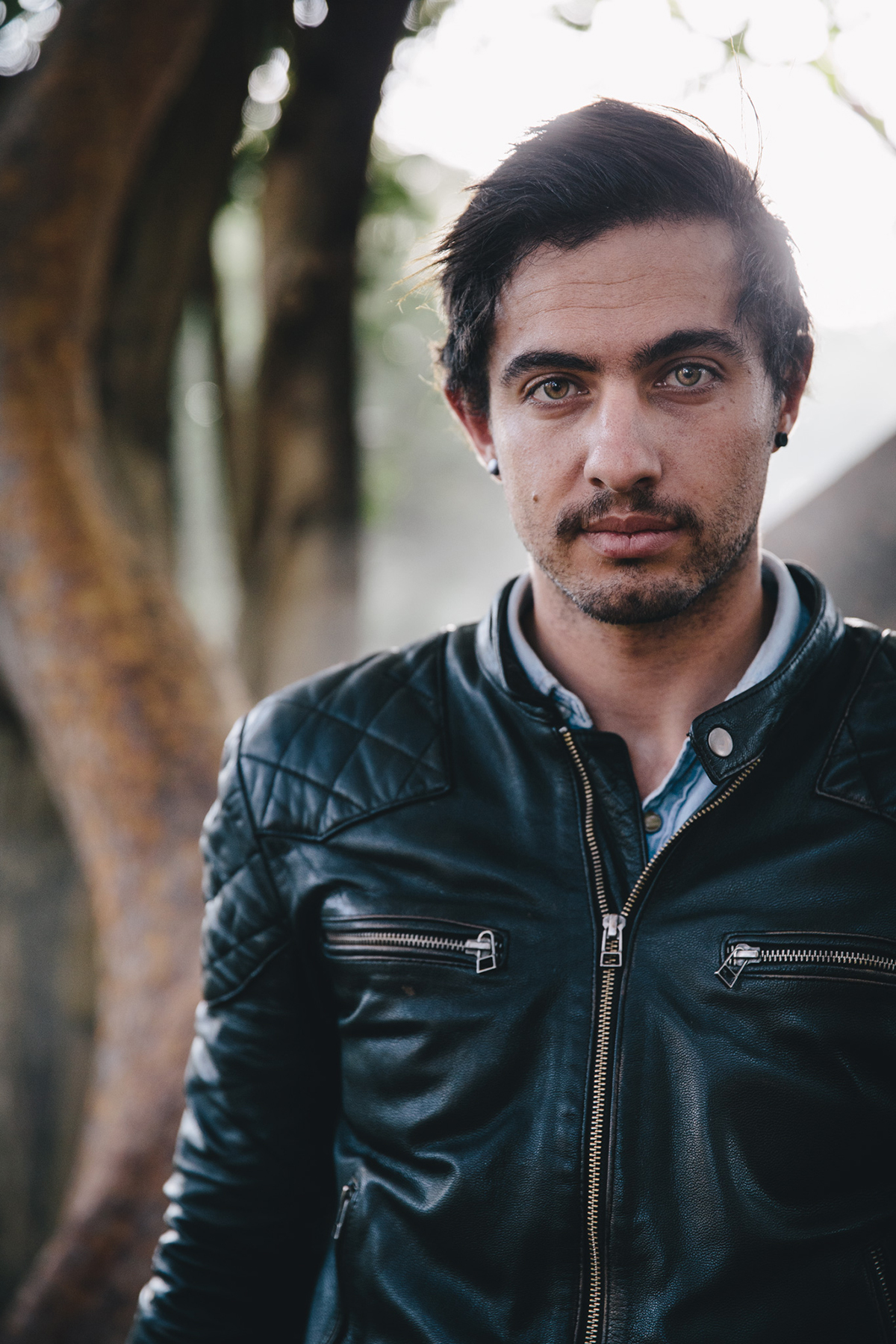 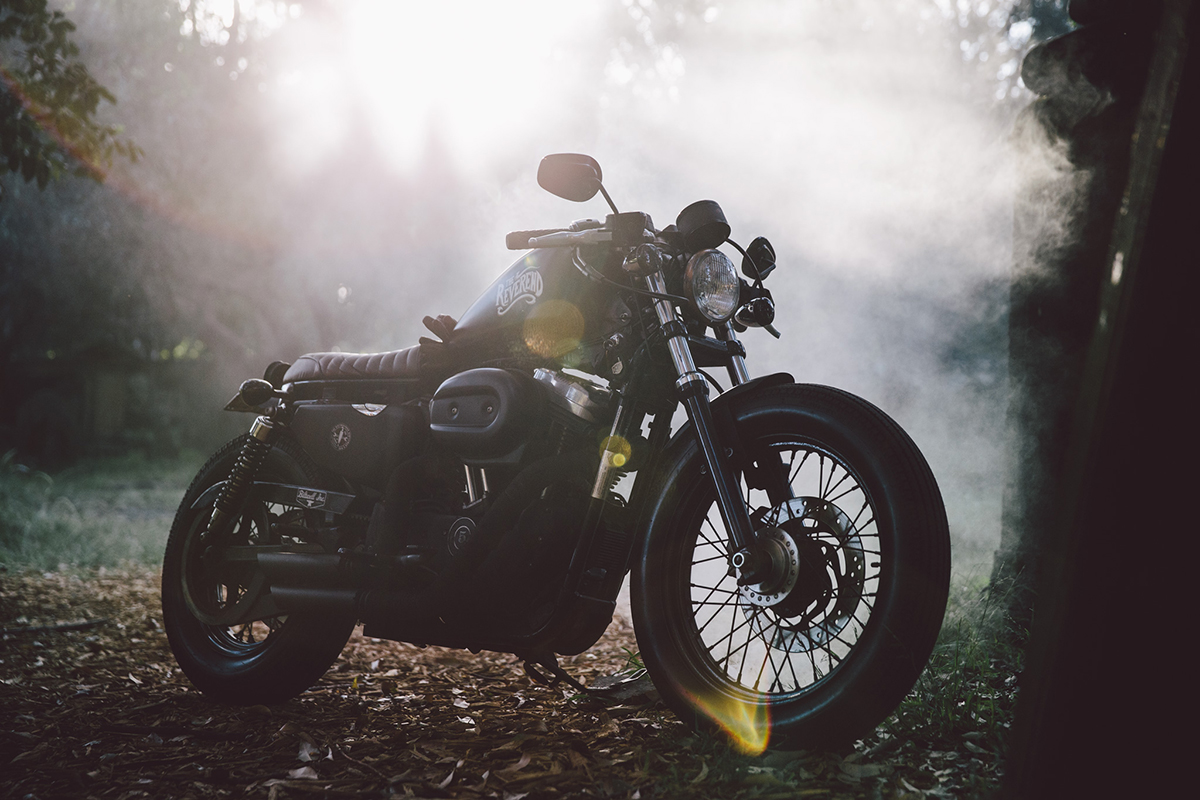 The following weeks would be filled with daydreaming of what and how to achieve this new project, with dozens of images being collected from builds around the world and inspiration being put to good use. “I was trying to mesh together a lot of different bikes I had seen. I’d create Photoshop mock-ups, and then decided to jump right into it and get to work with the angle grinder. Harley’s aren’t the best shape for café racers so that meant cutting pretty aggressively into the frame to build a whole new rear end. I then chucked on some new suspension to change the geometry of the bike even further. Once the way it sat was right, it needed some custom fabrication on the rear for the seat, which my mate Chris expertly took care of. It was then time for me to begin tearing every piece of chrome off and begin painting everything black.” 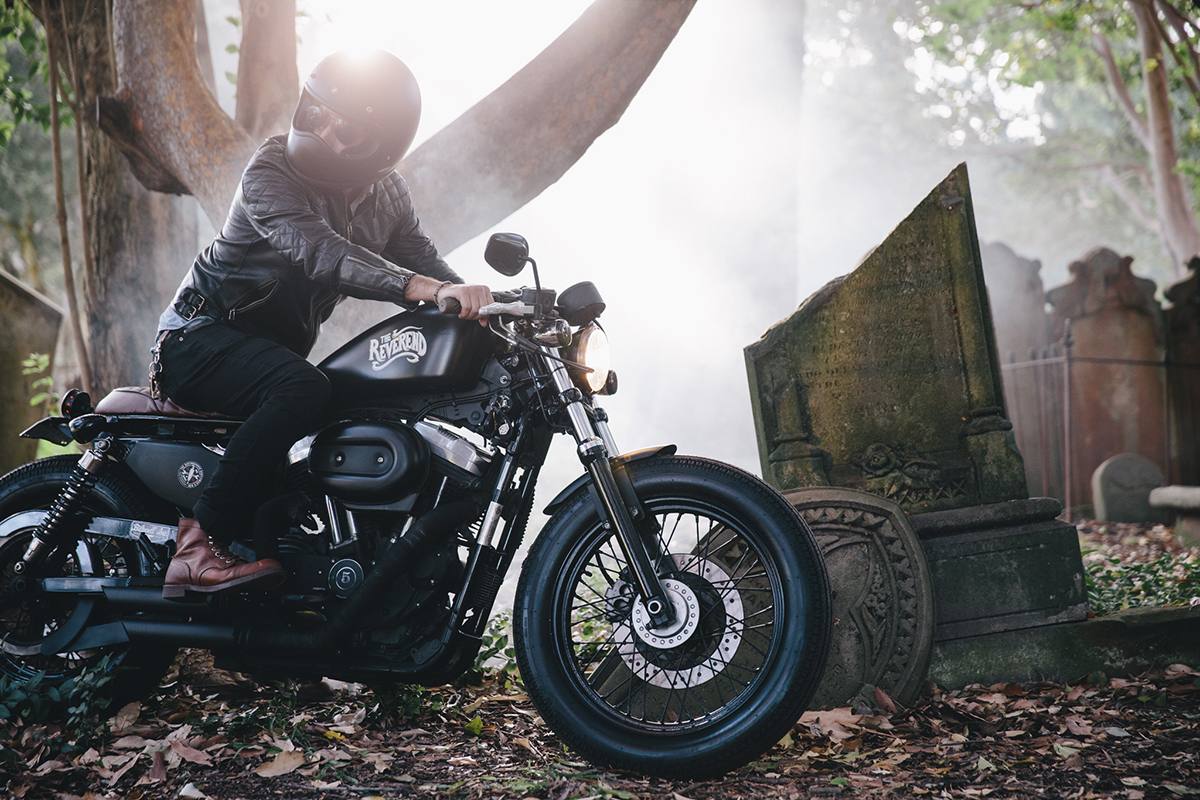 Despite not having much experience in the way of motorcycle customisation, Josh made the most with what he had, and stuck to his project. “There weren’t too many hiccups with the build, other than my lack of experience with electrics and fabrication. It took lots of frustrating hours playing around to make things work. Not having the right tools for most of the jobs was tricky as well. This meant doing it very slowly – the way you’re not meant to do it. For instance, painting the engine and wheels whilst they were still on the bike.” 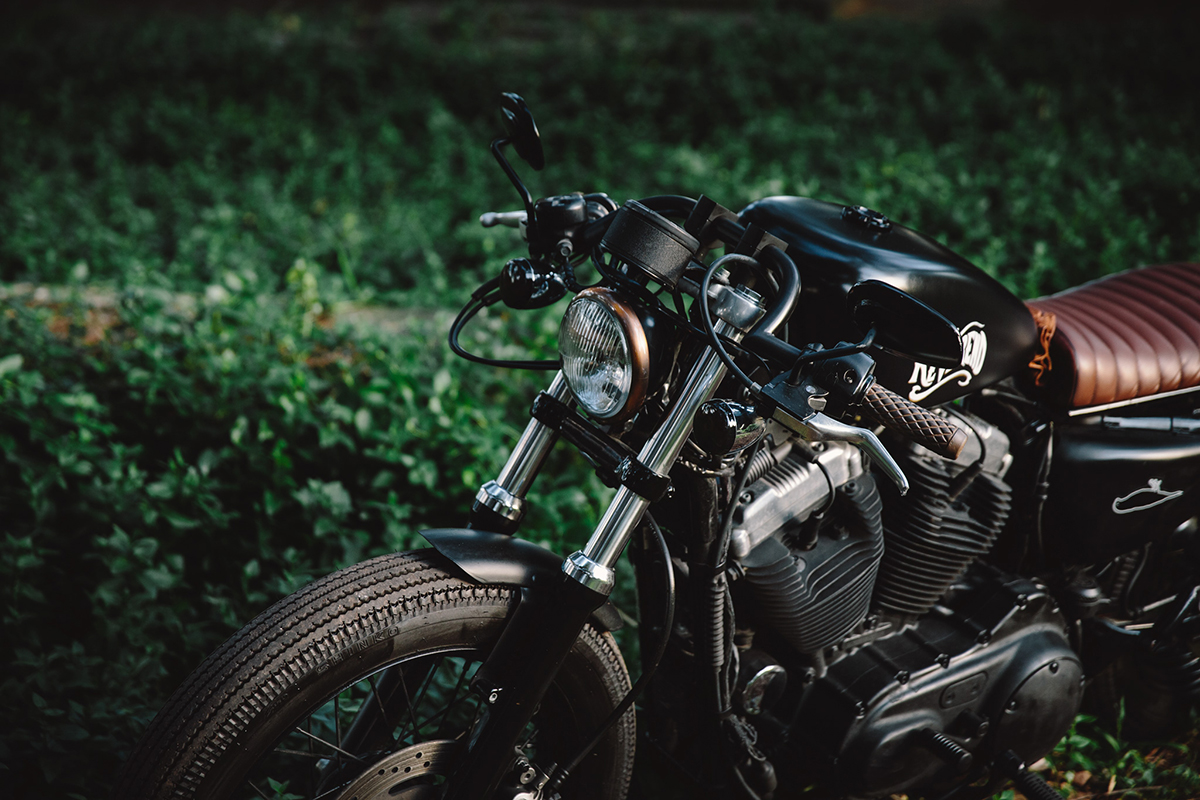 “It’s tough to say what my favourite thing about the machine is, but maybe the tank lettering. The name for this bike was picked out long before I had even purchased it. I knew I wanted to build an aggressive looking bike and call it the Reverend. It’s a name that’s a half tongue in cheek joke about this bike being the thing that will bury me, and half a bit of a joke on usually being the only token Christian around the motorcycle scene. But other than the tank I think just the way the bike makes me smile when I twist the throttle. It’s just really fun to ride. It feels so different to ride it now than when I began cutting it up, and it’s a seriously fun bike to ride now with the new geometry and controls the way it’s set up. I think perhaps most though I like that I did what people tell you not to do with a Harley-Davidson. I see why you’re not supposed to do this to a Harley, but it was fun and a challenge.” 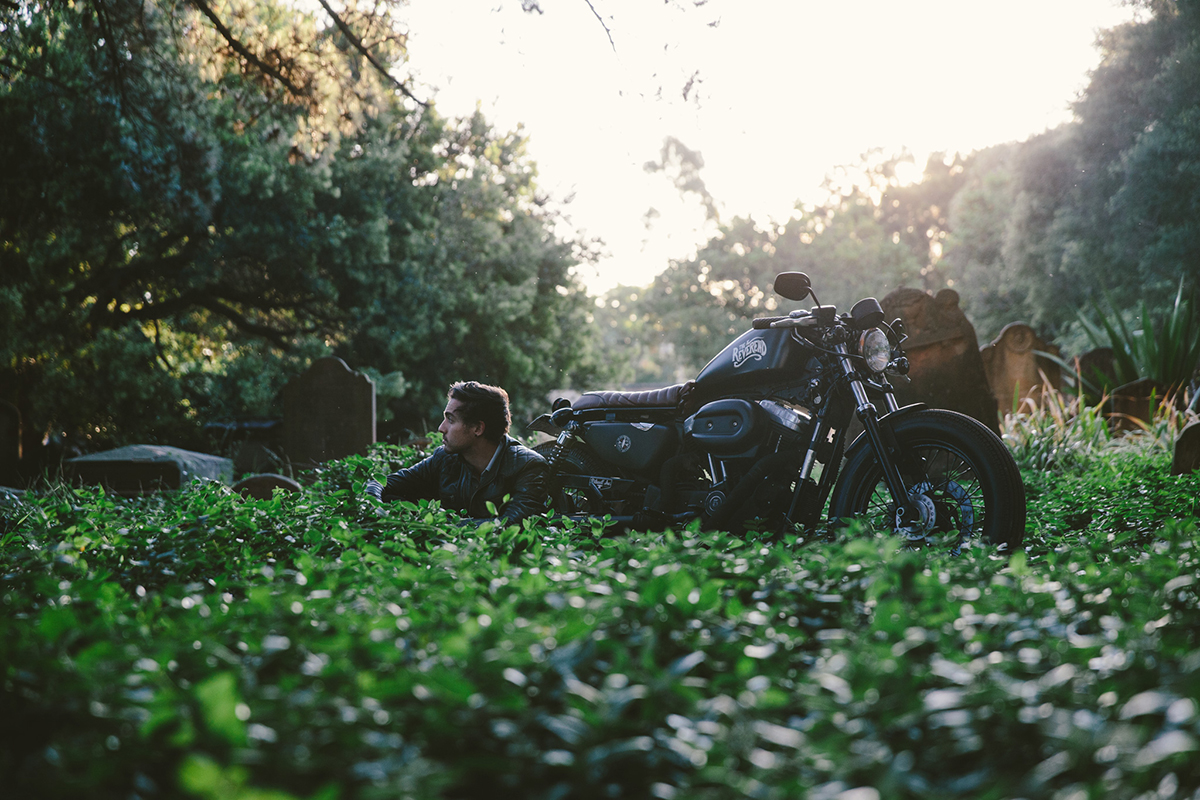 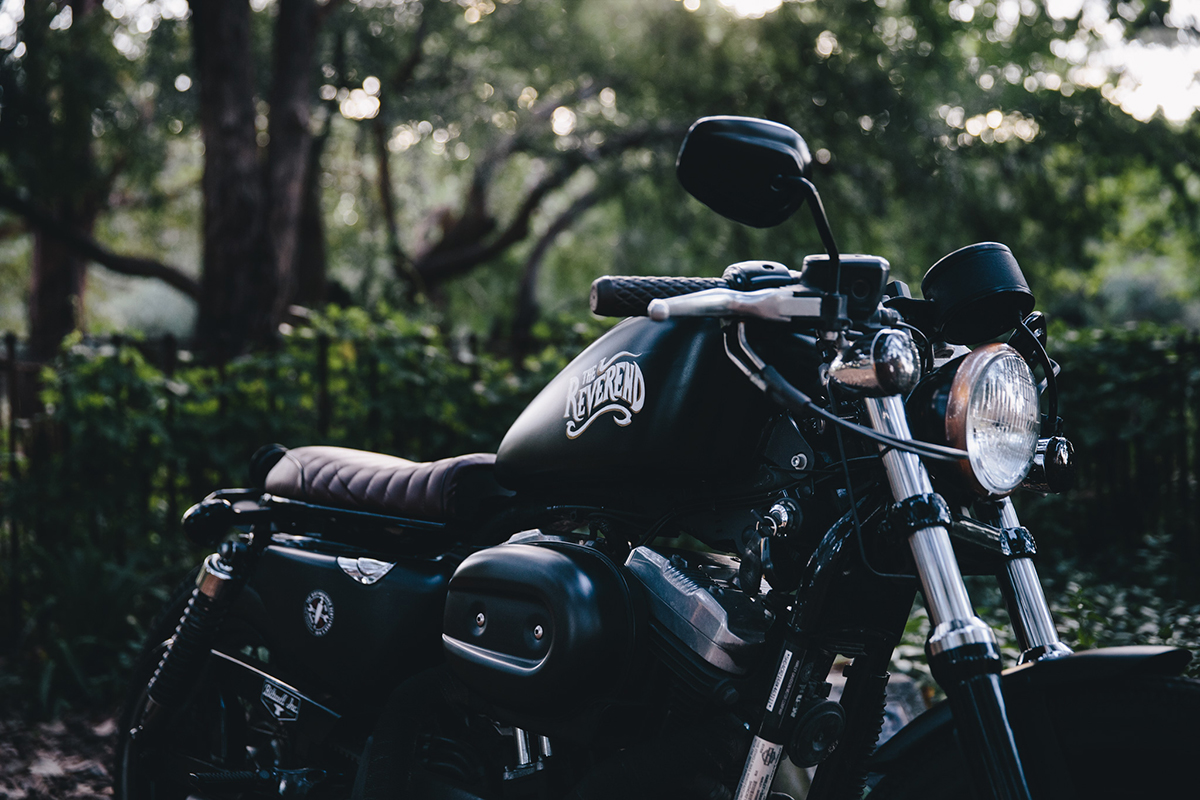 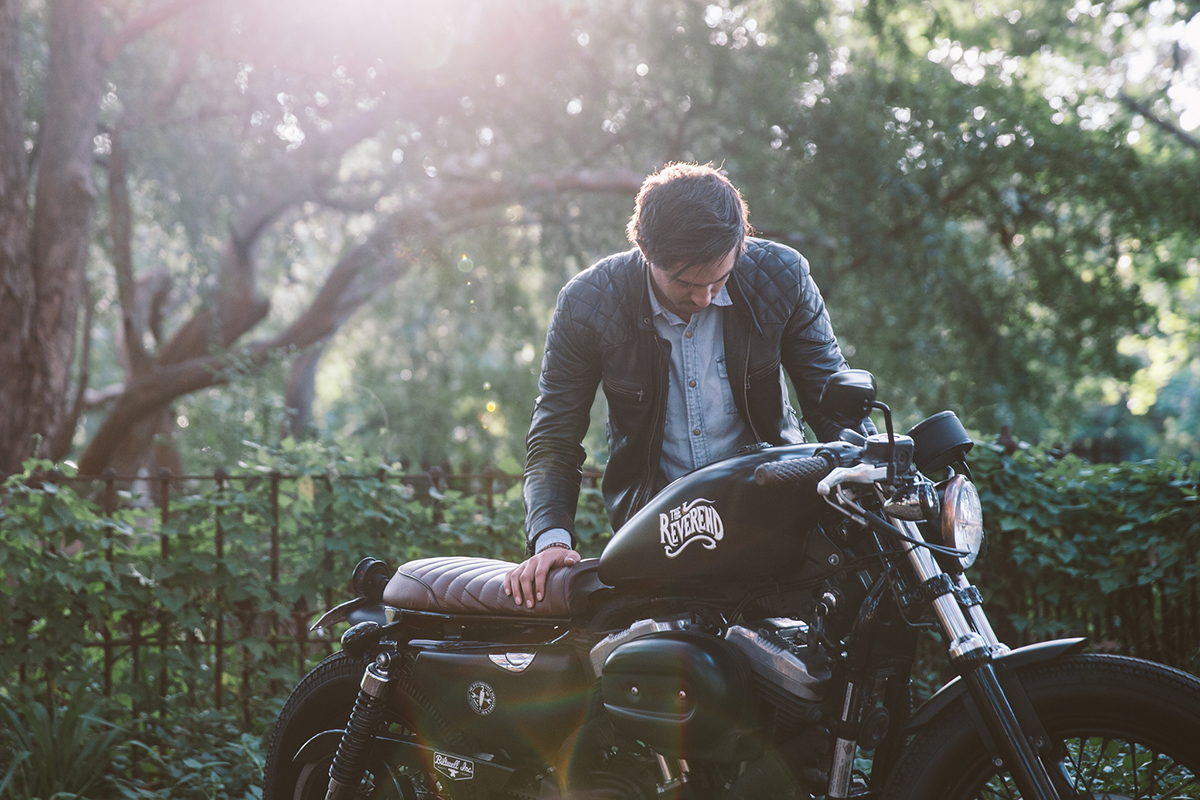