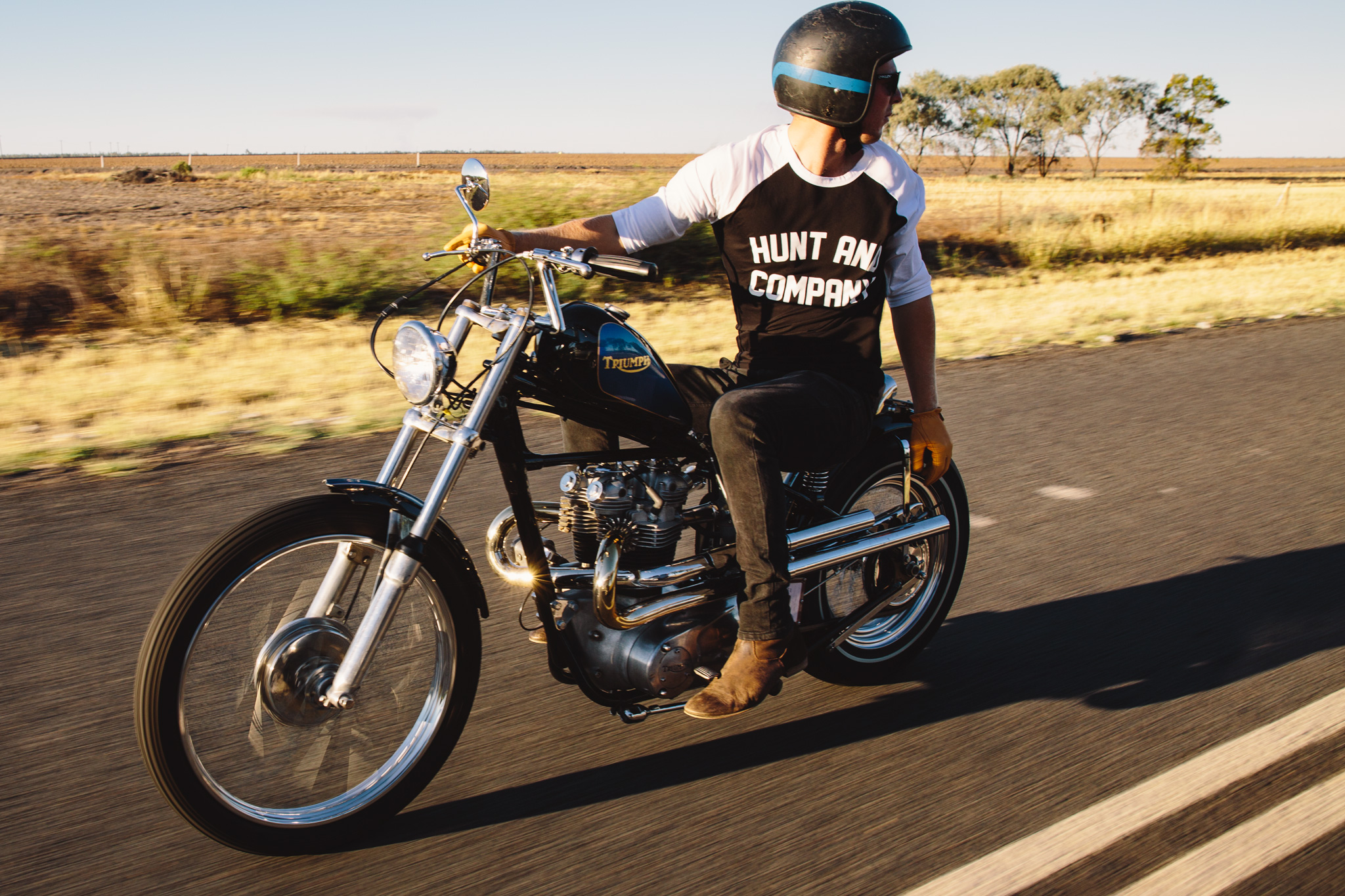 Three generations have sat their arses down on this Triumph TR6R, each making their own modifications over the decades. It’s a bike that has only gotten better with age, much like a fine wine – and it’s just as intoxicating.

Back in 1975, Jordan’s grandfather happened across a 1970 Triumph TR6R for the sum of $300 ($2,025 in today’s dollaridoos) in the country town of Inverell NSW, little did he know this would become a bike that would be passed down the generations. “My Dad then had the bike in Sydney while he was a young fella through the late 70’s, this is when most of the mods took place. There’s not much left on it that’s stock, as he blew a con rod out the side of the cases, replacing them with a set of ’68 tr6p cases.” When you’ve got a bike that’s been owned and modified by 3 generations, that’s a machine that’s going to be something special no matter how it looks or rides – though fortunately for us this one is bloody immaculate. 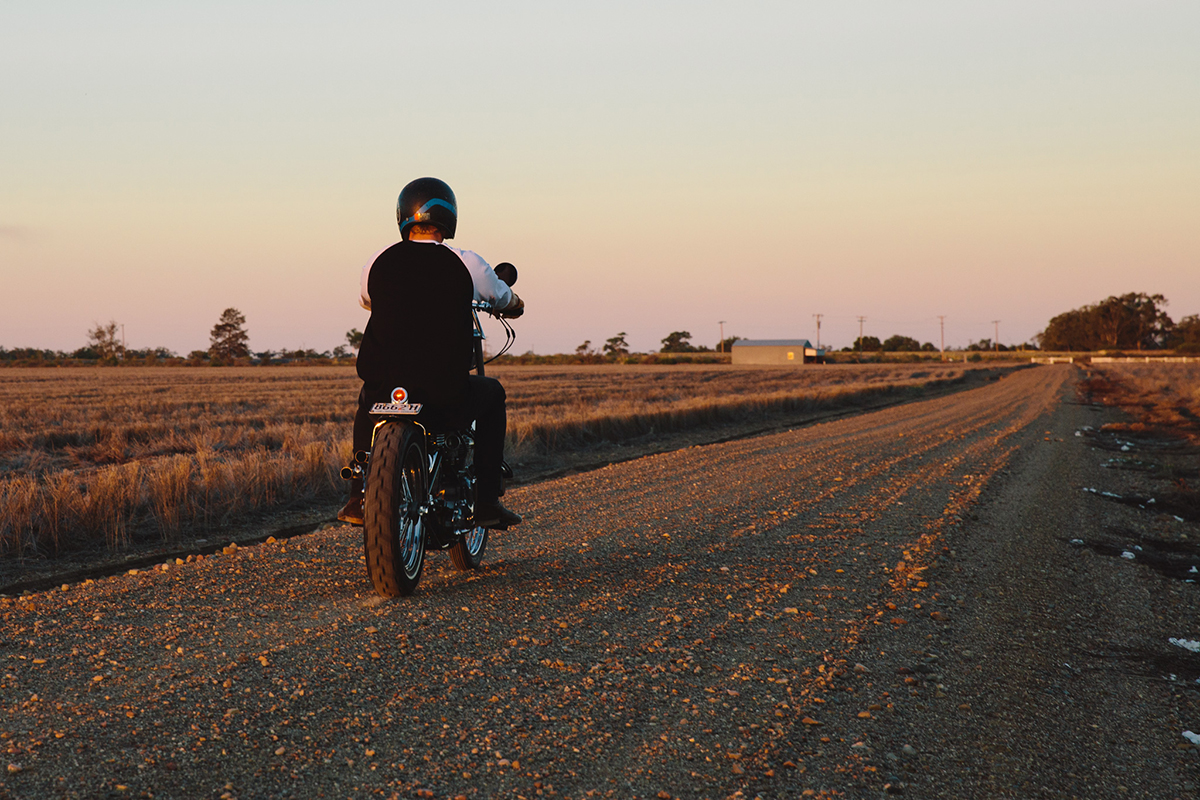 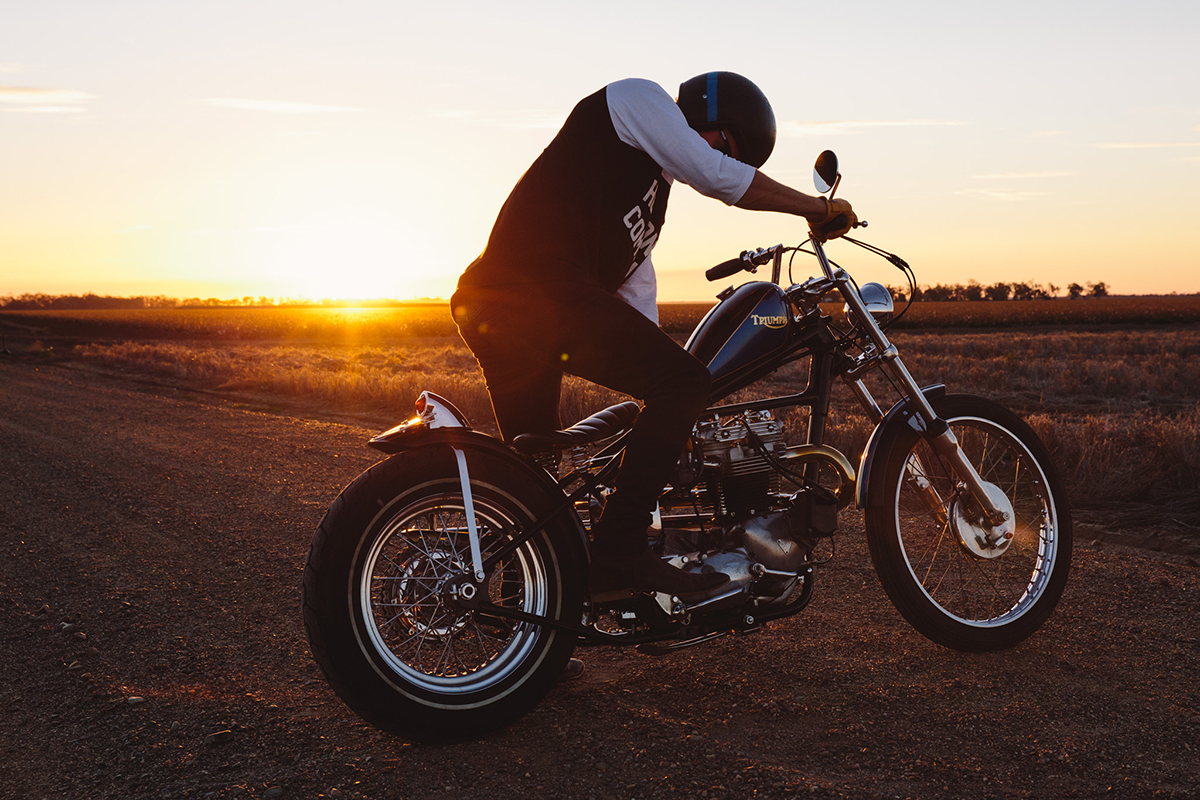 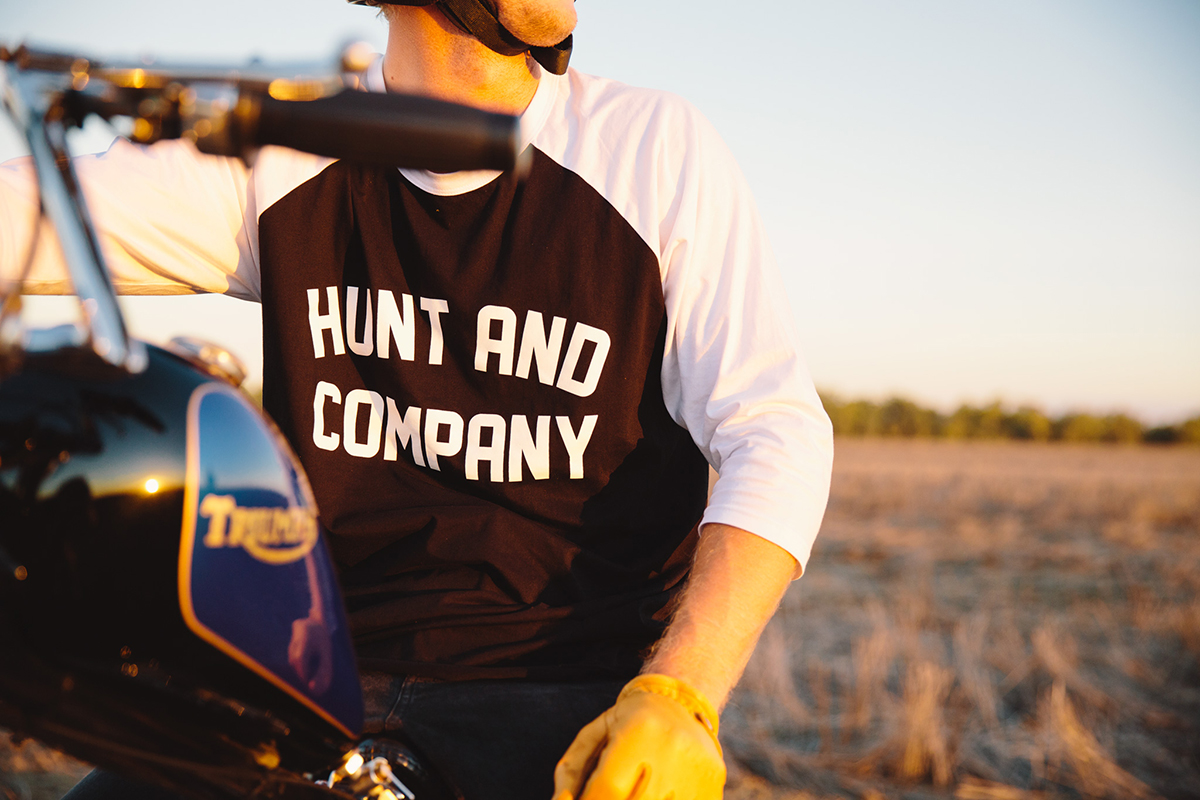 The bike has undergone a myriad of changes since it’s humble country town beginnings, but we’ll do our best to cover them without tumbling too far down the rabbit hole. At the rear end we’ve got an M&F choppers bolt on hard tail made and bought at their Bondi shop back in ’78. “The forks and front wheel were sourced off a Norton Commando and they have 2″ over stock length legs in them, they were 6″ over but in the last make over we chopped 4″ off them. The seat is Bates seat, typical of the ‘70’s chopper and bobber scene. The fuel tank is off a BSA Bantom and again in the last make over, the centre was chopped out, narrowed and welded back together. The oil tank is off a Pre-unit Triumph and mounted on the back of the down tube of the frame with custom brackets.”

Now to get to the engine, the heart of this ‘cycle has come a long way from the 650cc she started life with. “It now runs a Bonneville head (Twin carbi) and a Joe Hunt Magneto. We also added some Waggot Cams, which was an Australian automotive engineering company that gained fame for the engines they produced for motor sport applications from the 1950s through to the 1970’s. The exhaust was made by dad and then chromed. It now has a Sonny Routt 750cc Big bore kit – Sonny was a hell of a drag racer in the 70’s with Twin Triumphs!” 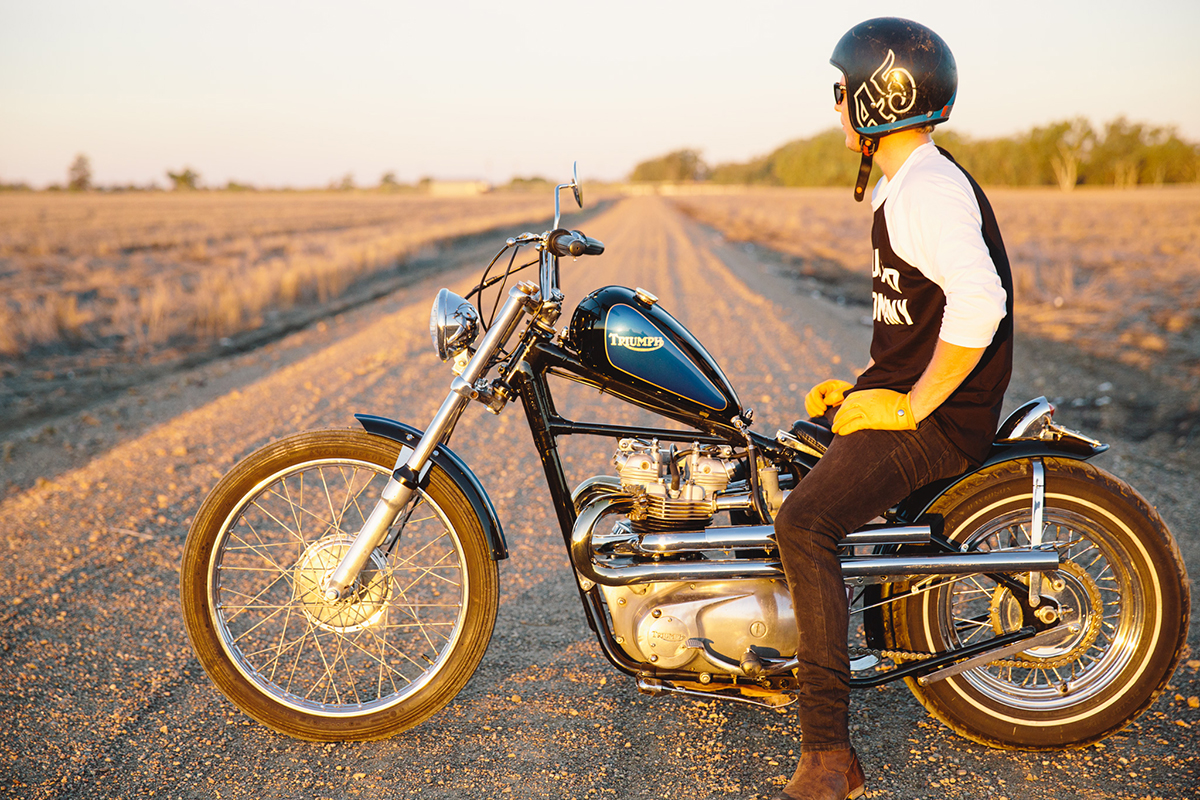 “Local Moree fabricators The Partridge Brothers made the solid steel manifolds, along with some other parts such as the chain guard etc. The paint was done by one of dad’s old mates, while my mate Mick and I finished it off by gold leafing the Triumph logo on the tank.  As it is now, I feel it’s a pretty good example of ‘70’s chopper nostalgia but in really good running order. It starts first kick and with the racing heritage of the engine components its a beauty to ride, especially having a hard tail and being so raw, you can feel all the characteristics of the machine and it responds to the riders inputs amazingly.”

It’s not just bikes that Jordan is giving a revival to, but also classic style moto wear and merch with Hunt and Co. After selling all his bikes (bar the Triumph) Jordan headed off to waffle about Europe for a year back in 2013 where he would go to as many motorcycle events as he could, from the Isle of Man TT to Sideburn’s Dirt Quake. After returning home, the need for speed machines was still in his veins.

“Between my brother and I, we have competed in MX Nationals, Aus Supercross championships, Finke Desert Race, been on Carey Harts’ Hart and Huntington freestyle tour and also raced in the USA. It kind of felt like that part of my life was pretty fur-filed, and I wanted to make something where I wasn’t spending all my spare change on. This is how Hunt & Co. was born. It was something I created to bring my mates together to help make some cool and creative content, hit up events and make some awesome gear with a laid back feel.” 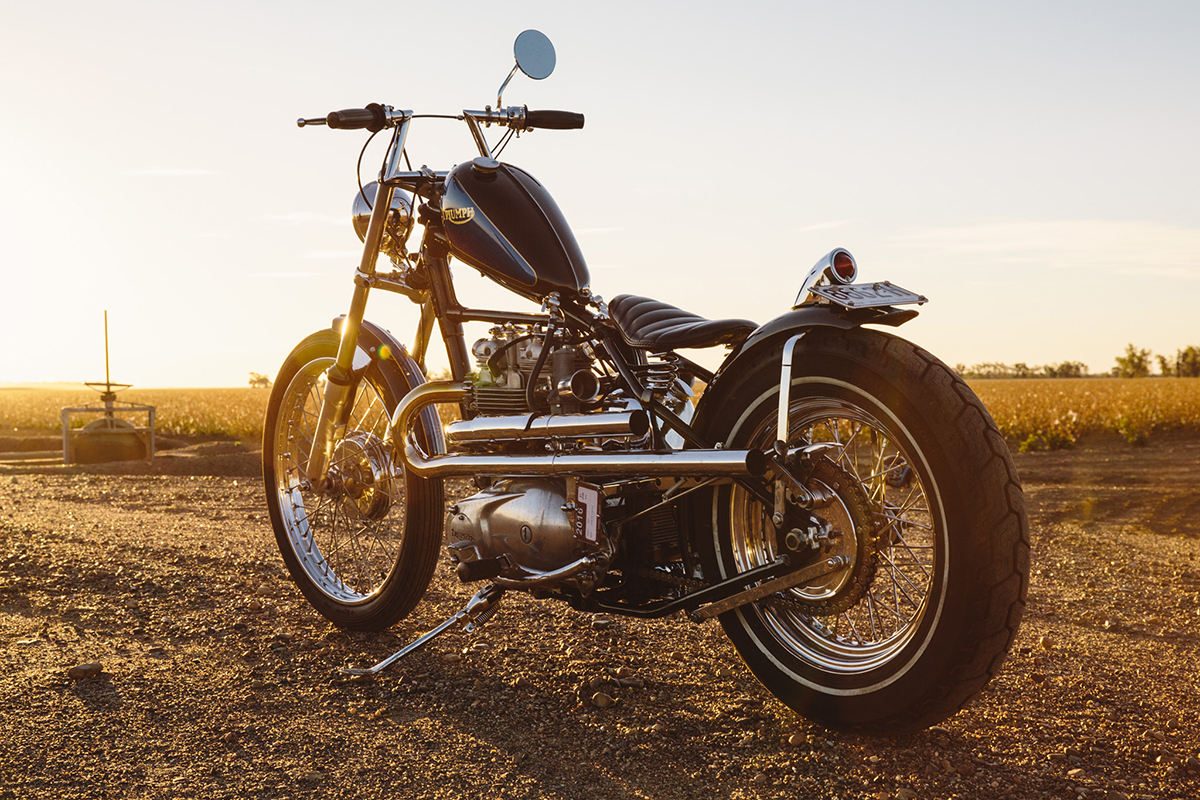 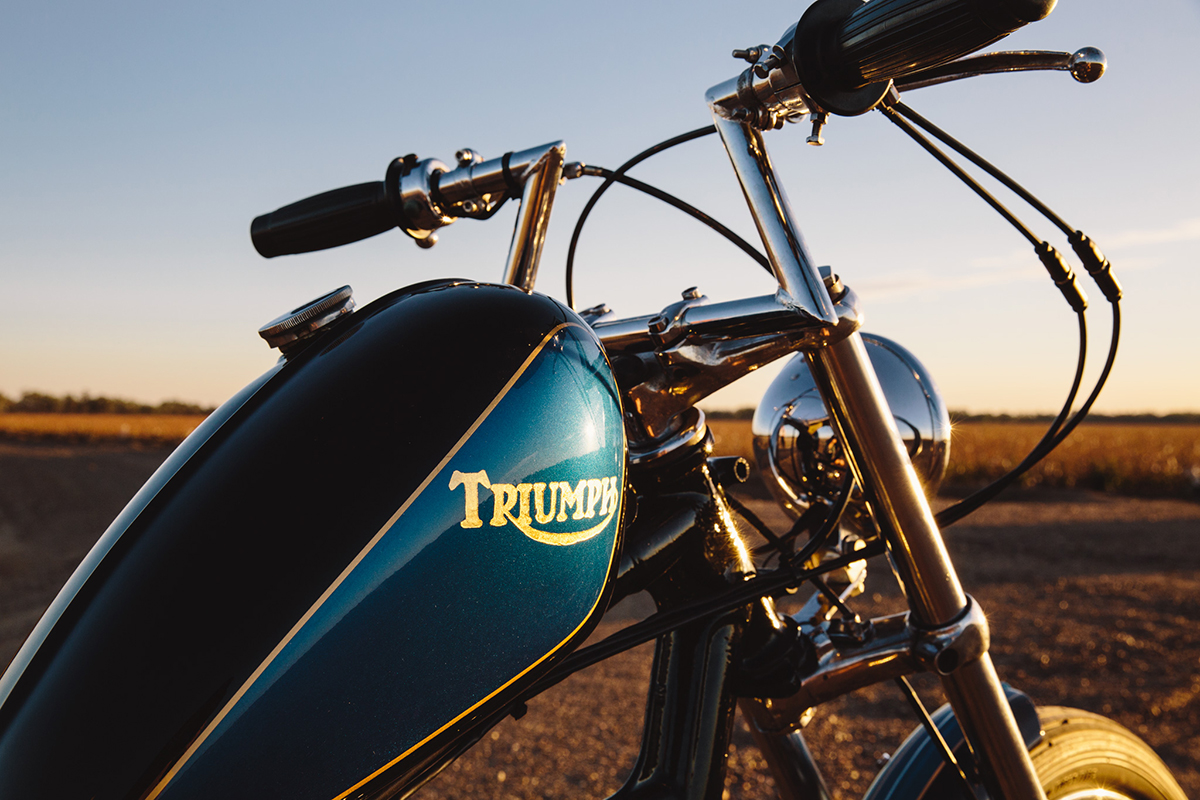 Jordan’s intention with Hunt & Co.’s gear would be to bring a timeless aesthetic feel to motocross gear, which is represented in their awesome moto jerseys. “I also wanted to bring a more youthful feel to the road scene, I feel my mates and I are skilled and capable on the modern bikes but really dig the style of older stuff, more so the ‘60’s and ‘70’s eras.” Nostalgia and nods to the past are something that just about every apparel and bike brand are dipping their toes into these days, with varied and creative results. It’s a mixing pot of old with new, creating it’s own unique aesthetic.

“We want to push the brand further and we want to build more bikes with the balance of speed and style. The brand at this stage is growing organically, but as we get through some of the early adult things we’re told to knock over first we’ll be able to push Hunt & Co. harder and basically make awesome products and insanely cool project bikes! We’d also like to get more involved in events, and to open a flagship store is also a dream. The passion for motorcycles will always be there so even though we aren’t making huge leaps just yet, I can’t see Hunt and Co. dying off any time soon. 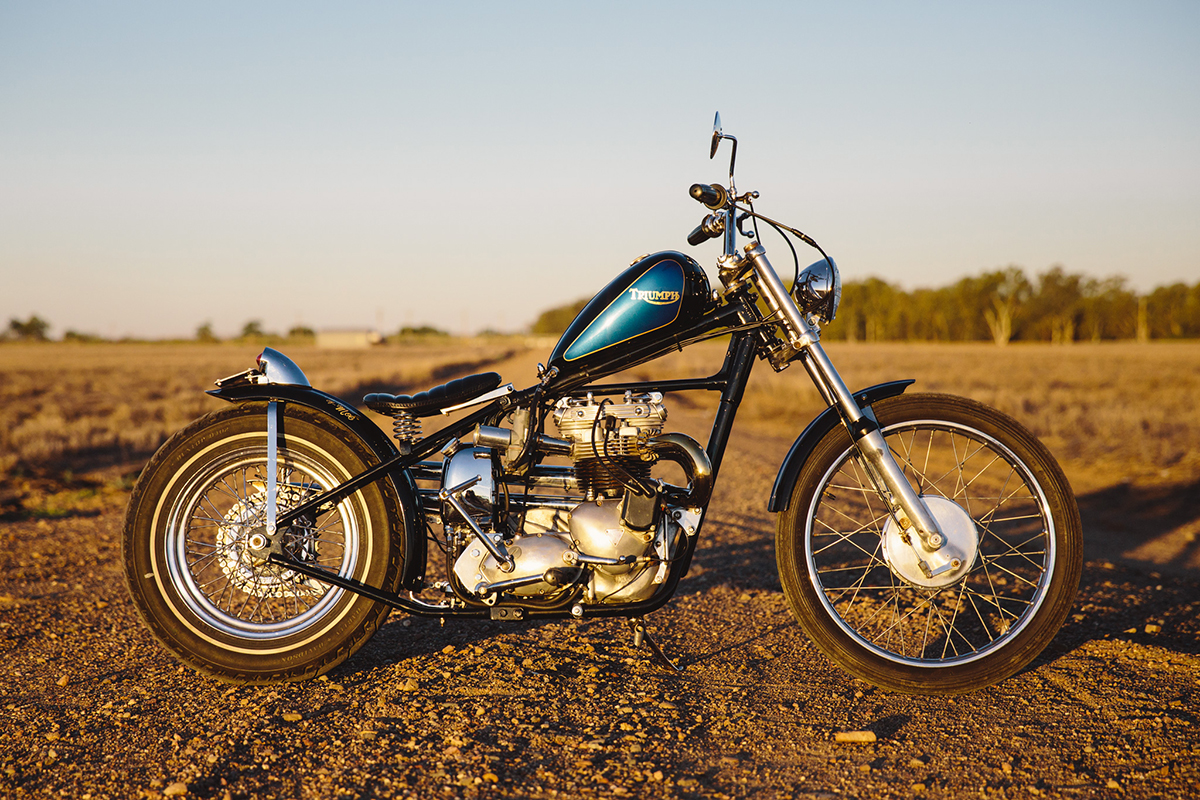 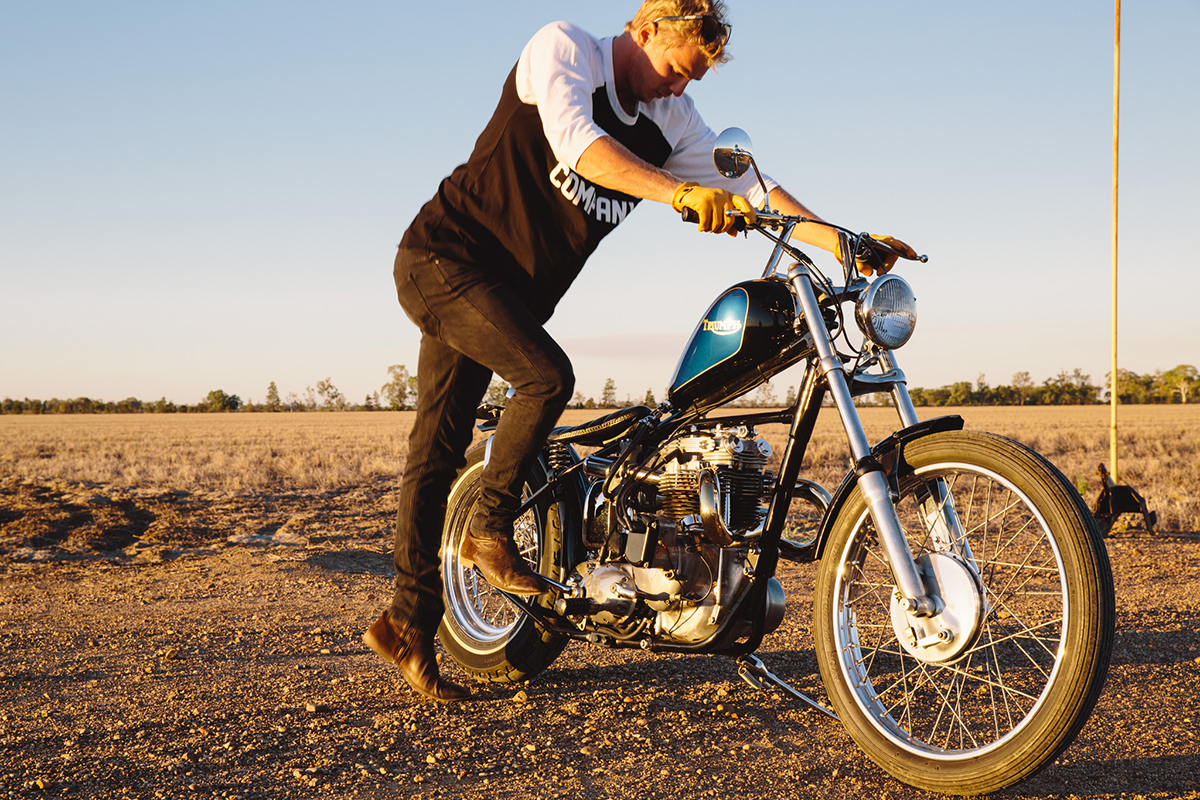 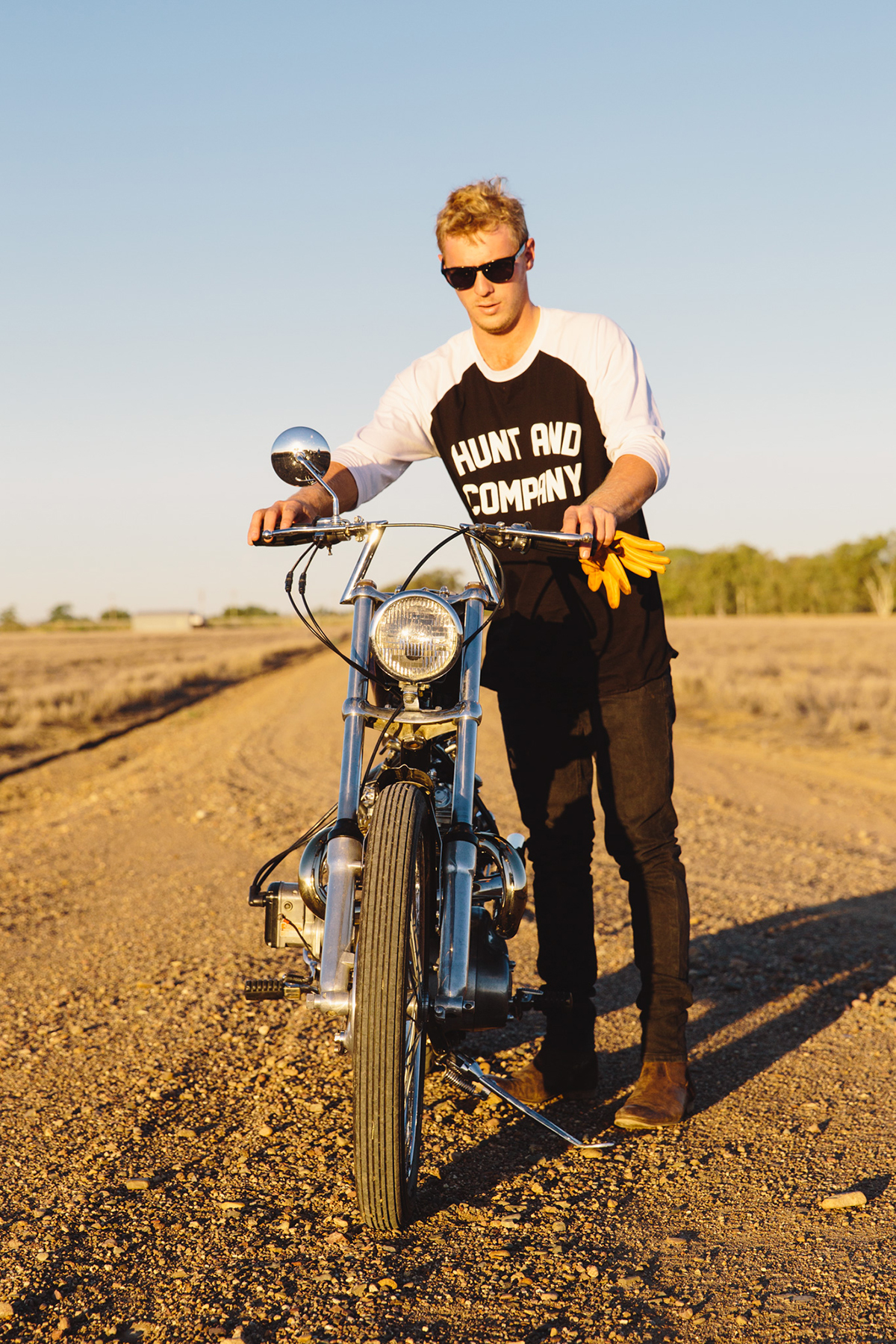 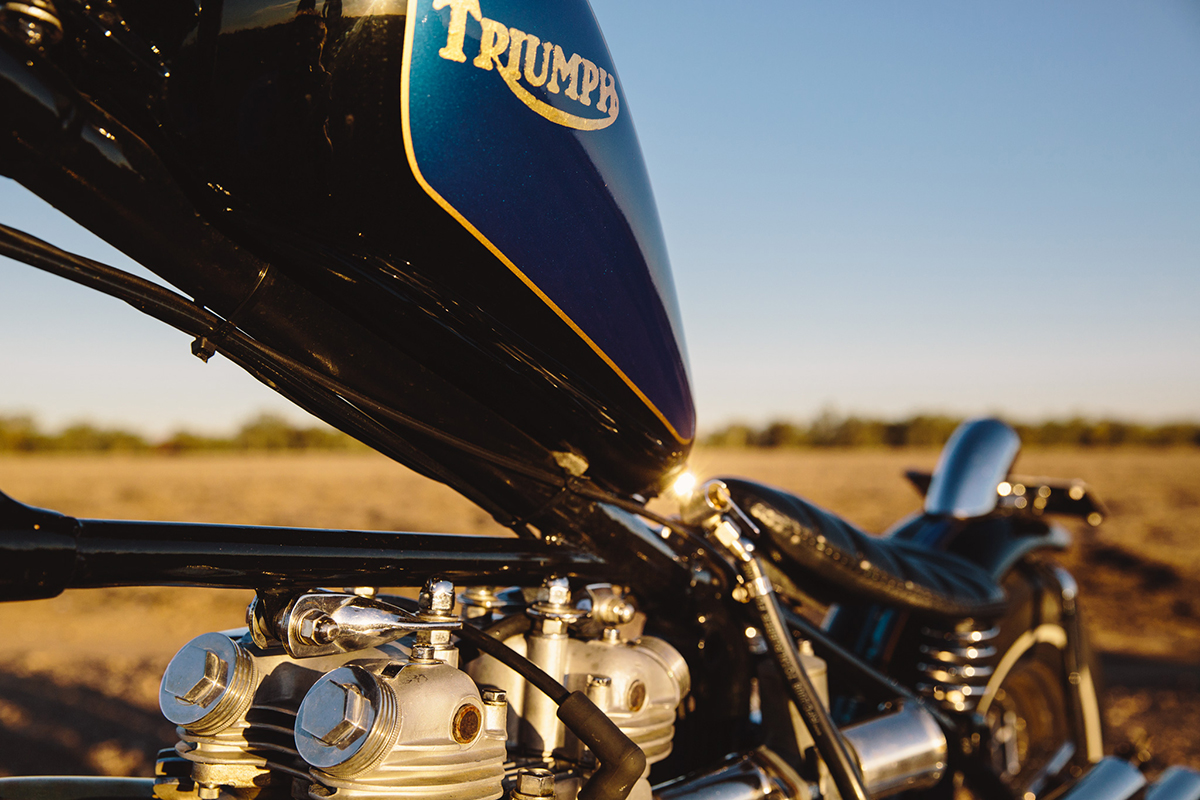 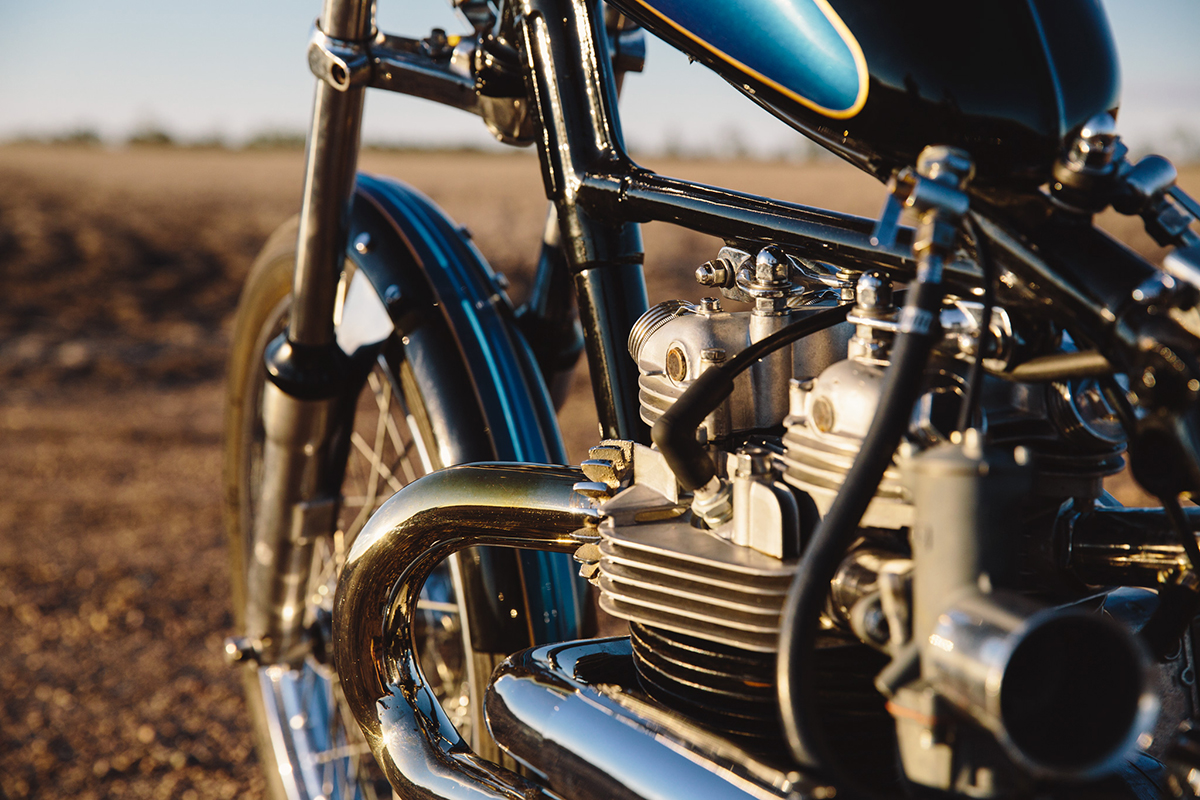 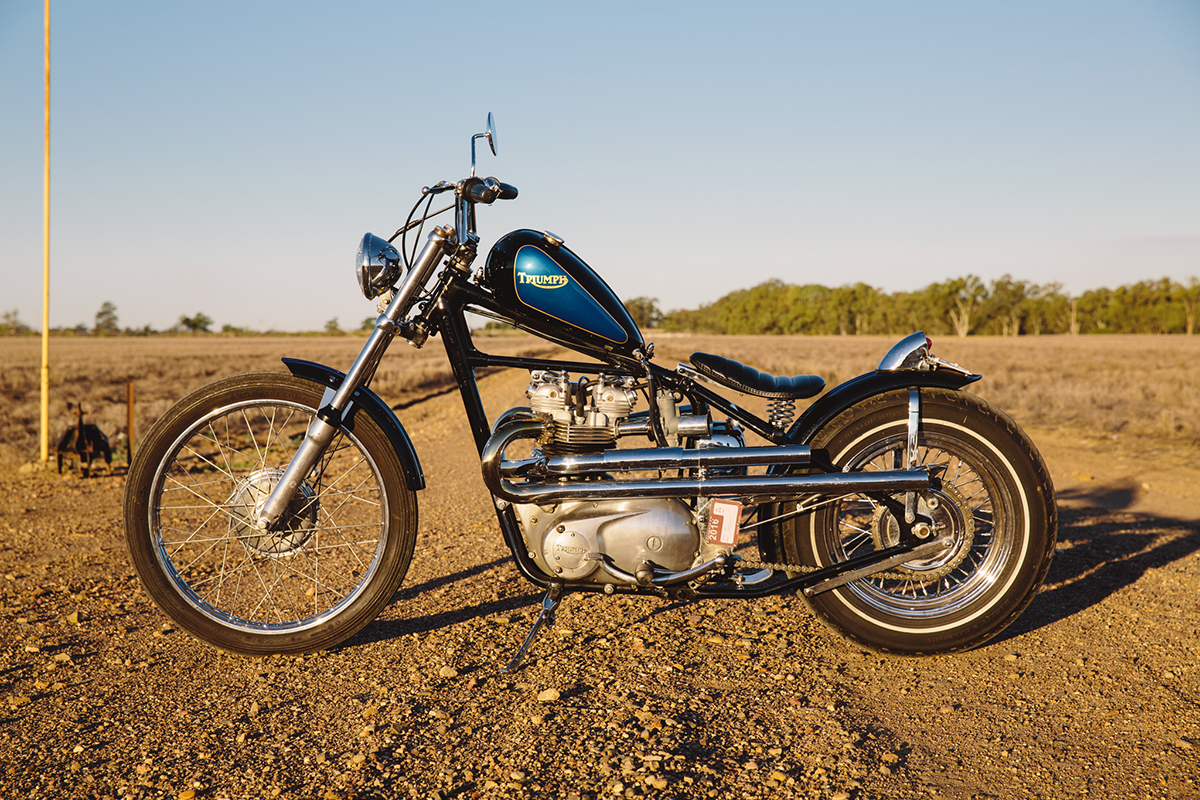 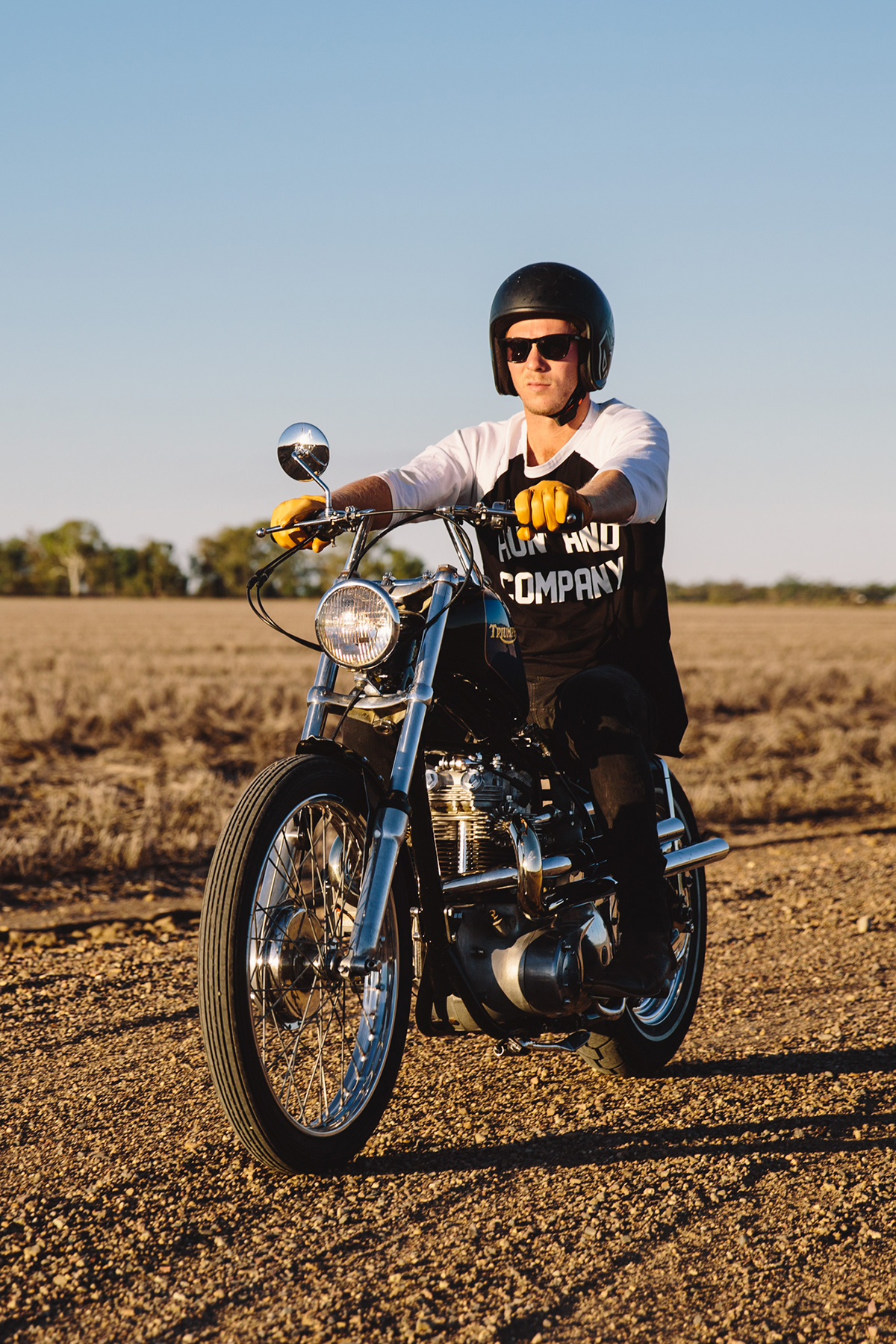 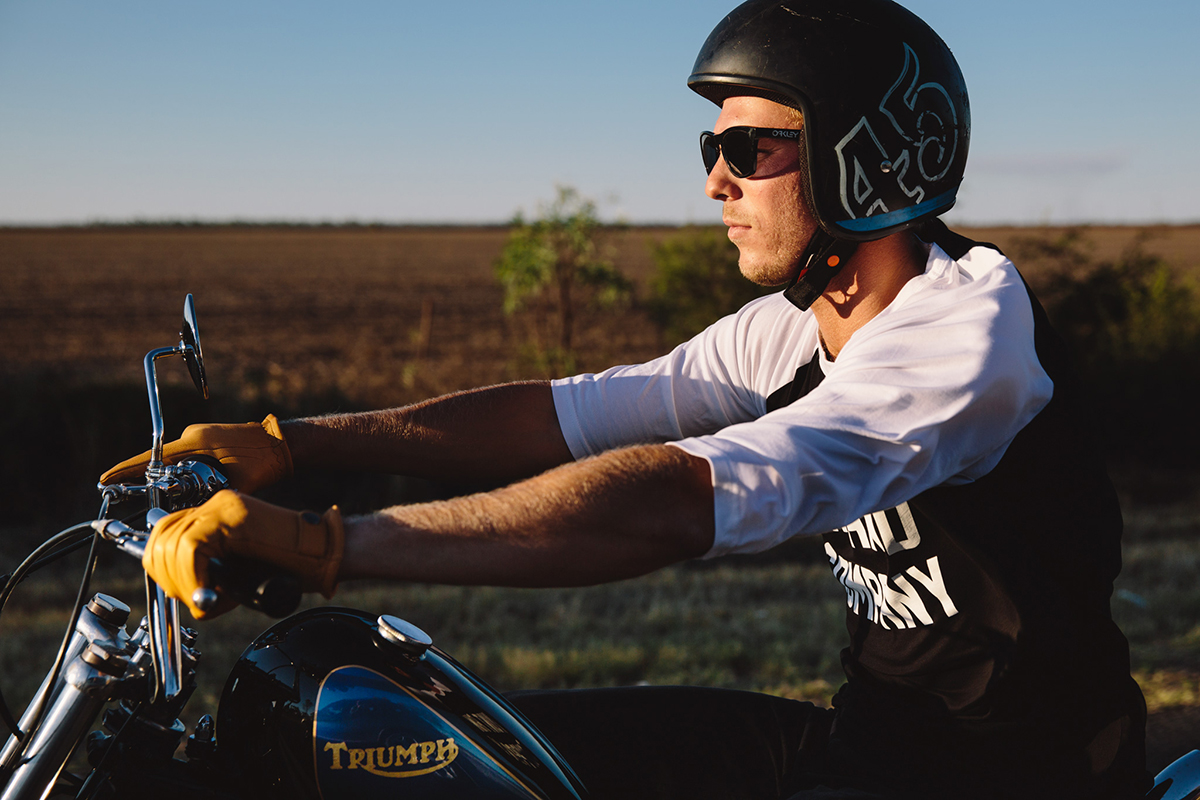 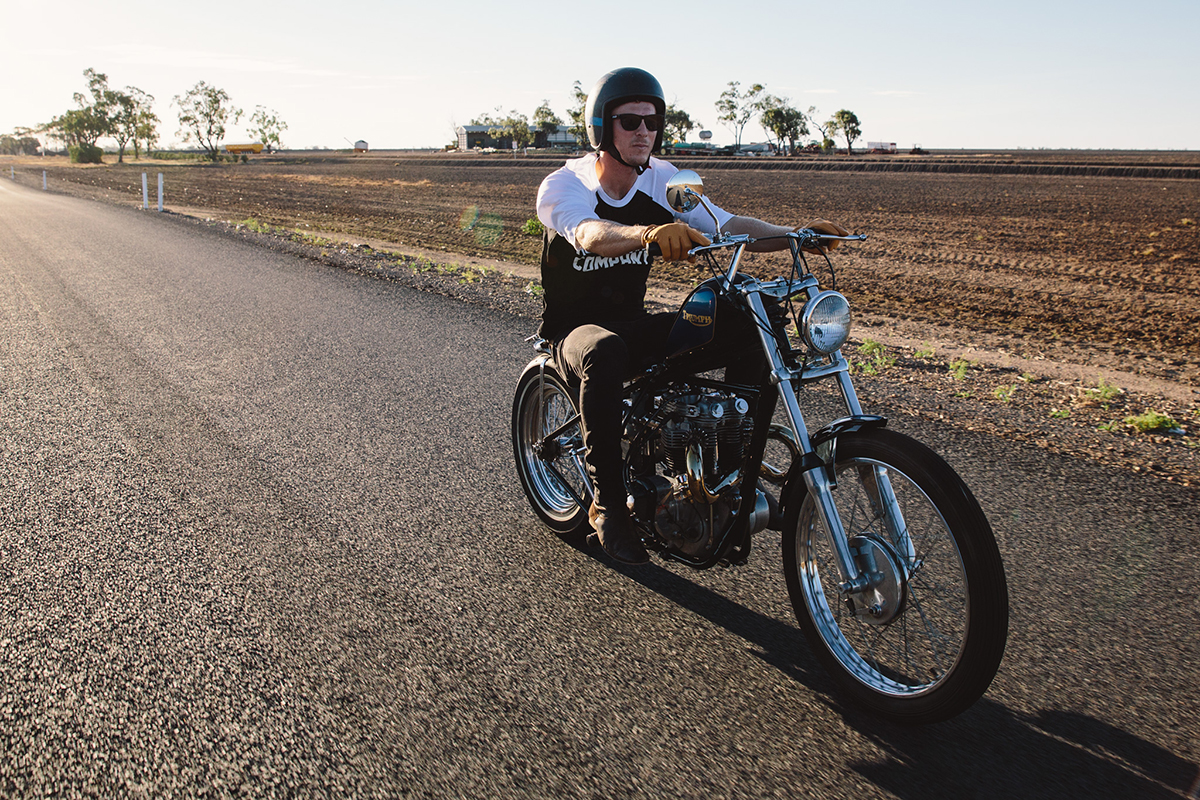