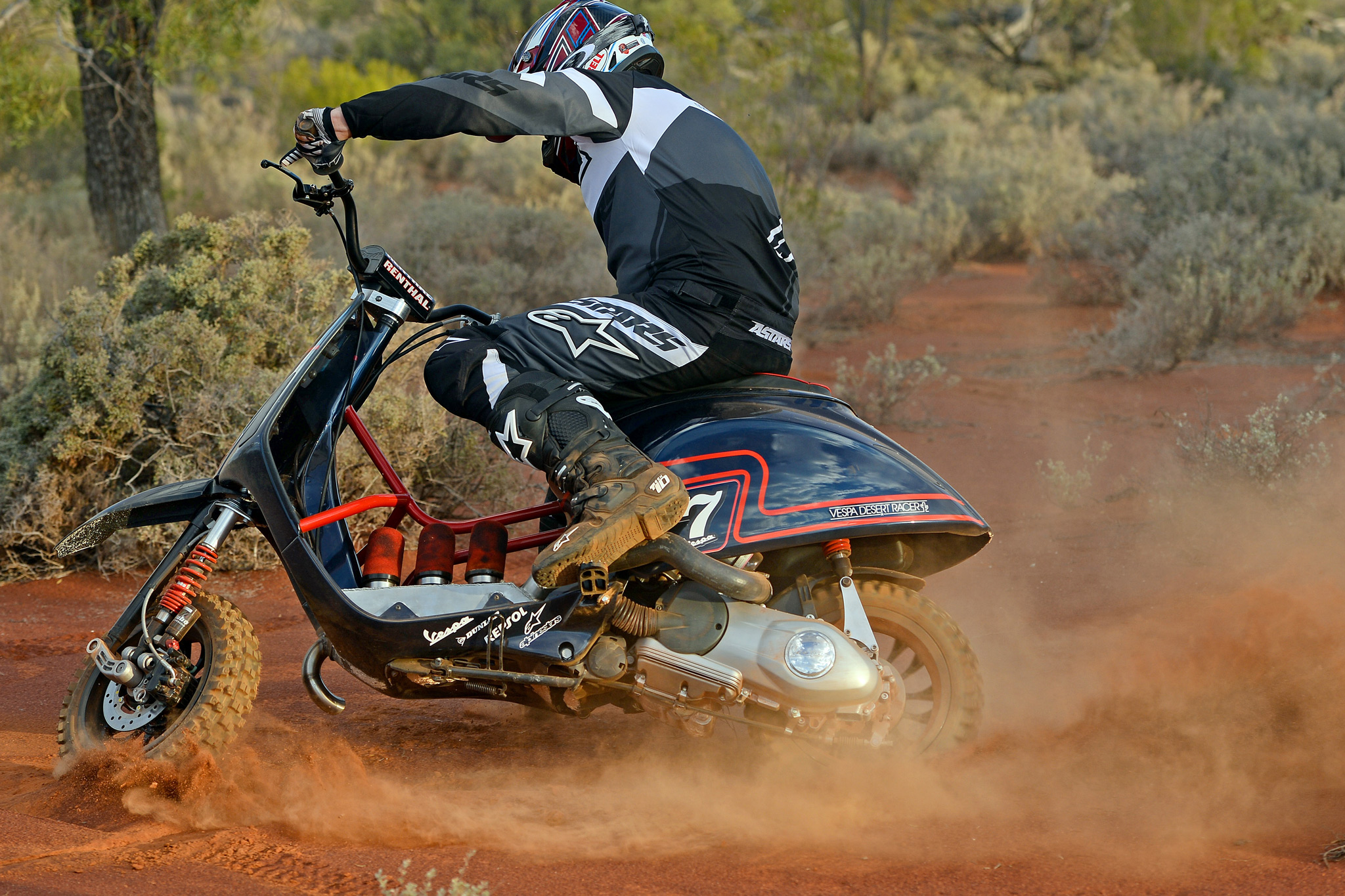 What do you do when you’ve got almost 16kms to cover between the starting line and the campsite when you’re on the salts flats? You make the meanest Vespa around, that’s what.

While out on Lake Gairdner in South Australia for a week of land speed racing on the salt flats, a workhorse was needed for PS Imports Director Paul Chiodo for traversing the deep desert sand and rocky terrain between homebase and the starting line for the Triumph Salt Racer.  While the Piaggio Typhoon 125 that was in use was fine for the lake, it battled against the harsher Australian landscape. An idea had now sparked, and a collaboration was created between Melbourne based Supacustom and Vespa Australia to create a machine that could tackle the tough terrain for those all-important beer runs (and other jobs, we’re sure). 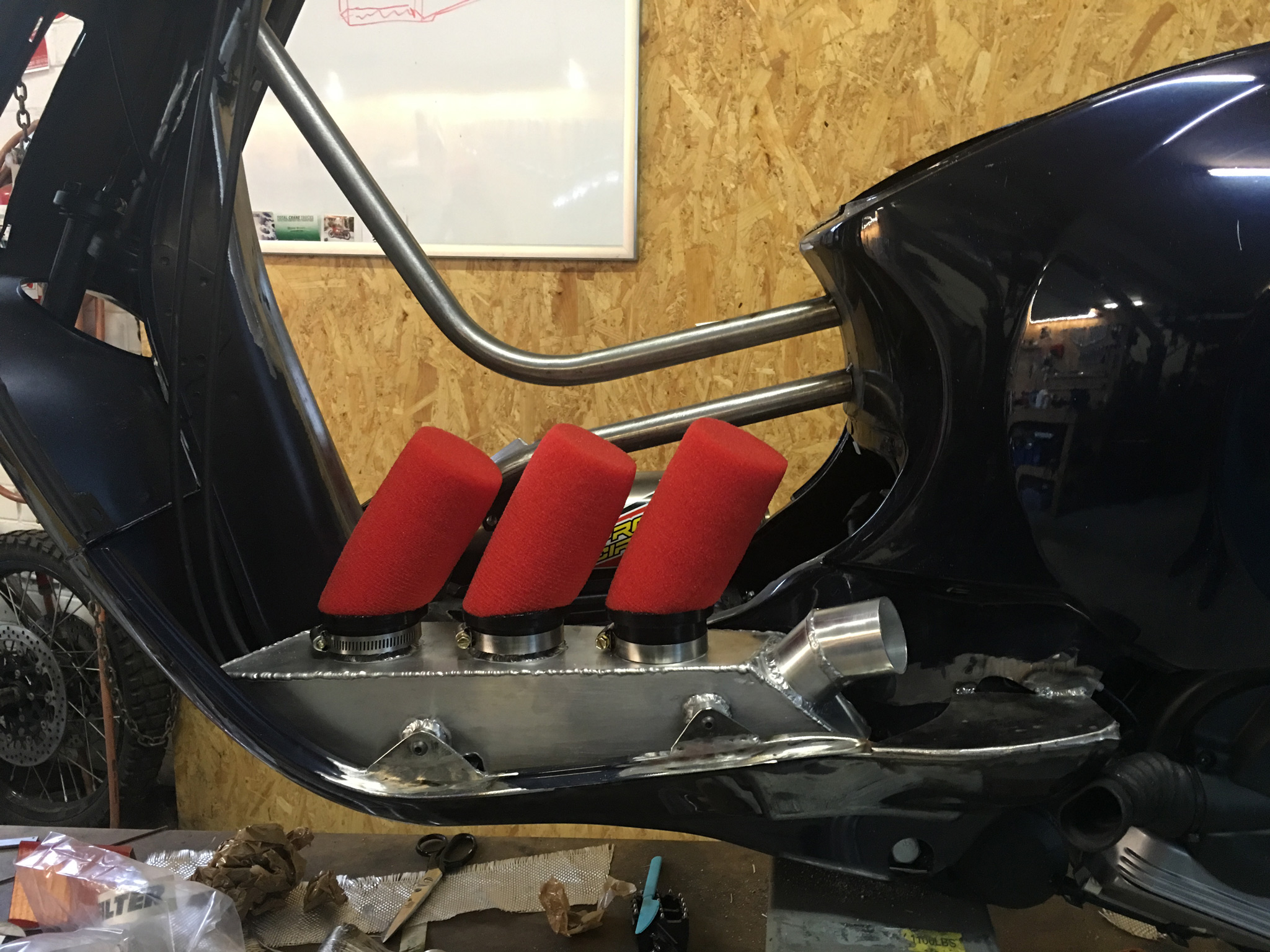 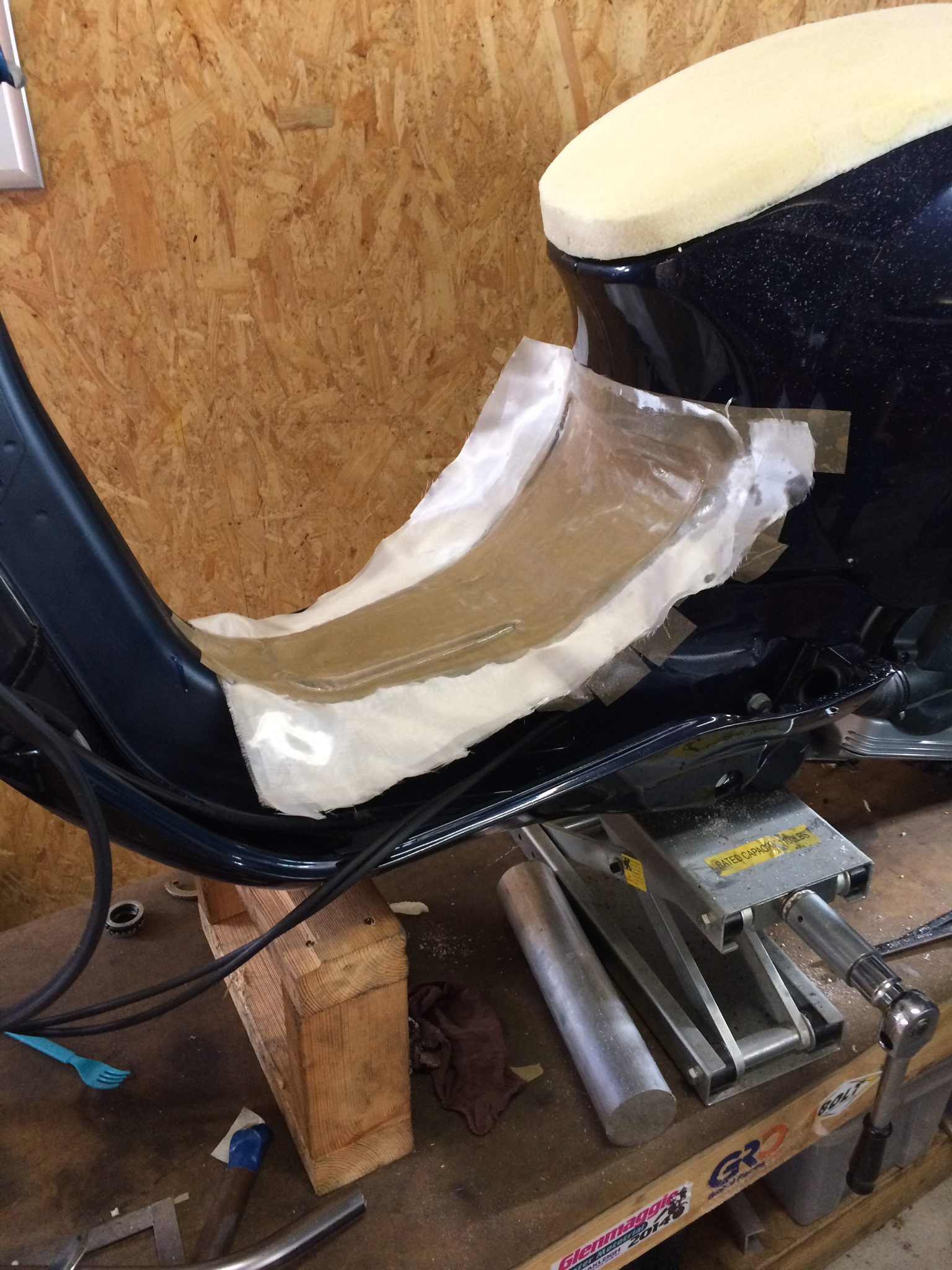 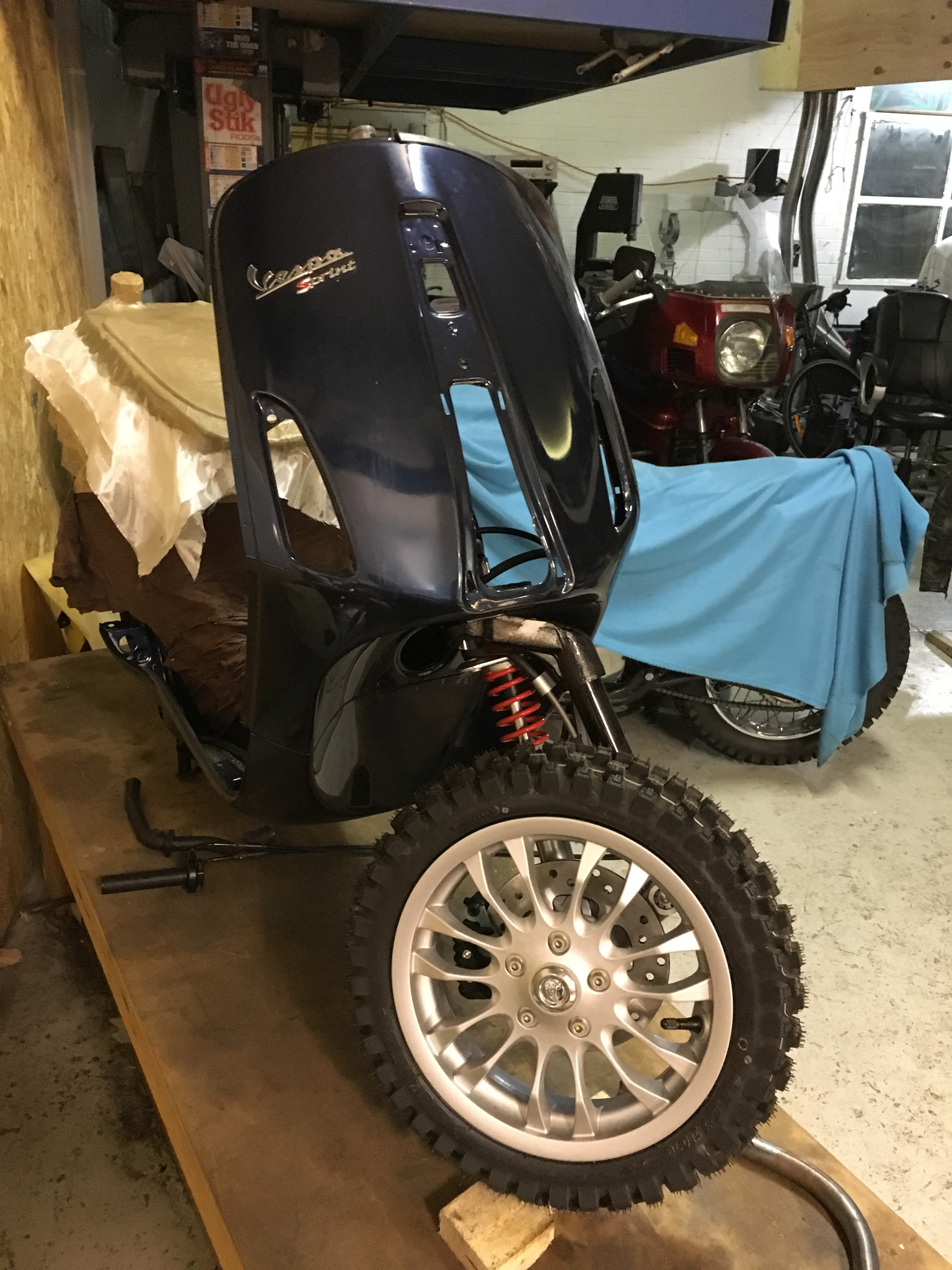 The basis for this zippy desert racer would be a 2015 Vespa Sprint 150 I.E 3 valve, chosen for its classic look, clean lines and new 3 valve motor. “One of the challenges of this project is finding, adapting and fitting parts that will take the VDR to Desert racing stardom. As far as aftermarket scooter parts go; desert racing / off road components are not high on manufacturer’s priorities. For this reason, we have had to improvise and pick the best option that will work – often with heavy modification. As our parts started to arrive the anticipation started to build, and we soon found that each part created its own series of problems.” This would be no simple stripping of parts and bolting on of new ones as the project began to grow, and by Paul Chiodo’s own admission the build started to get “out of hand”, not that that’s a bad thing.

The crew got to work stripping the body back to a bare shell, with any and all redundant parts being cut from the body. To make sure this Vespa was good and sturdy for it’s forthcoming life of desert abuse its body was reinforced in the forward and aft, and side-to-side. 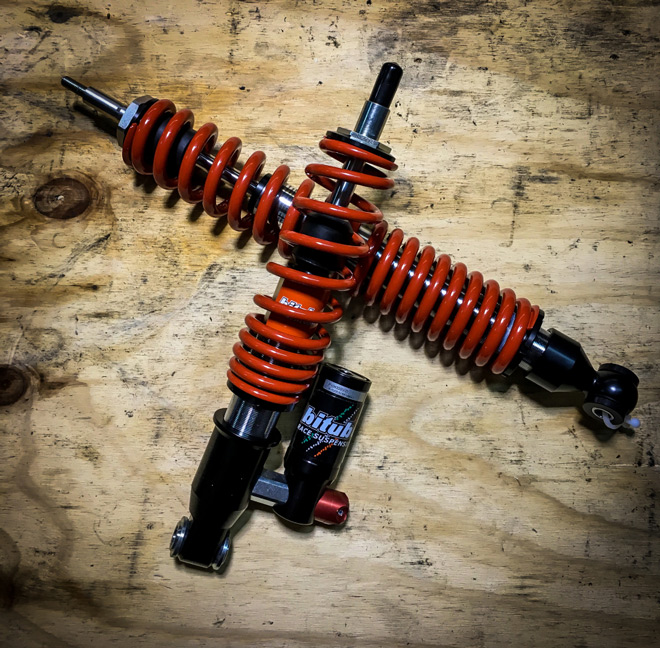 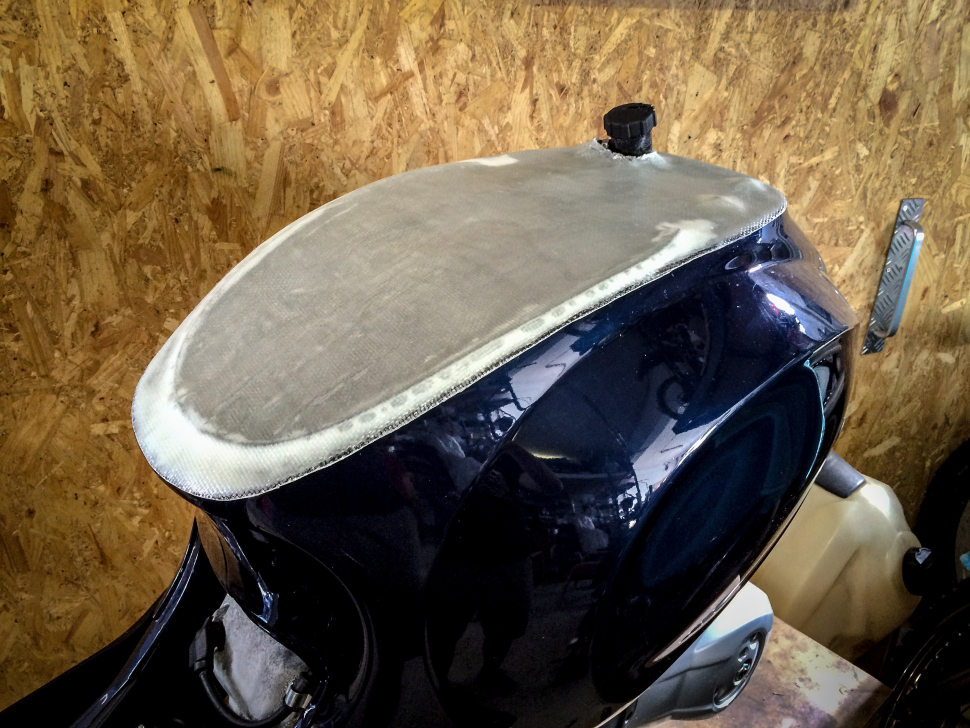 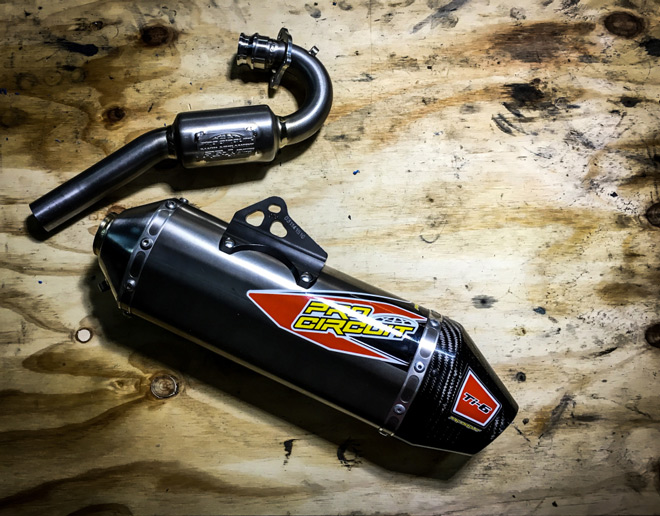 “We all agreed that getting the seat shape right was key to the look of the bike – we knew the standard seat had to go. Visually the shape and composition of the seat has a huge impact on the overall look and feel of the VDR. We also planned to mount pivot pegs on the scooter which will be located significantly further back than the normal foot position. This will totally change the seating position moving the weight further aft, while also helping to un-weight the front wheel making the scooter much easier to ride in sand. These factors have all contributed to scrapping the original seat and making a new base from scratch.”

The team determined now that the best way to create a new seat would be out of fibreglass, using packing tape to mask off the areas that were to be moulded. “We then used the West Epoxy System, with some very light fibreglass twill to carefully layup 5 layers over our mould. The thin twill worked really well in capturing the detail of the seat base.” Once the initial layup was complete the base was reinforced with some heavier fibreglass cloth with the edges being refined using epoxy resin and micro balloon filler. “Once this had set we trimmed the base and began to prepare the base for pouring expanding foam to create some volume.” 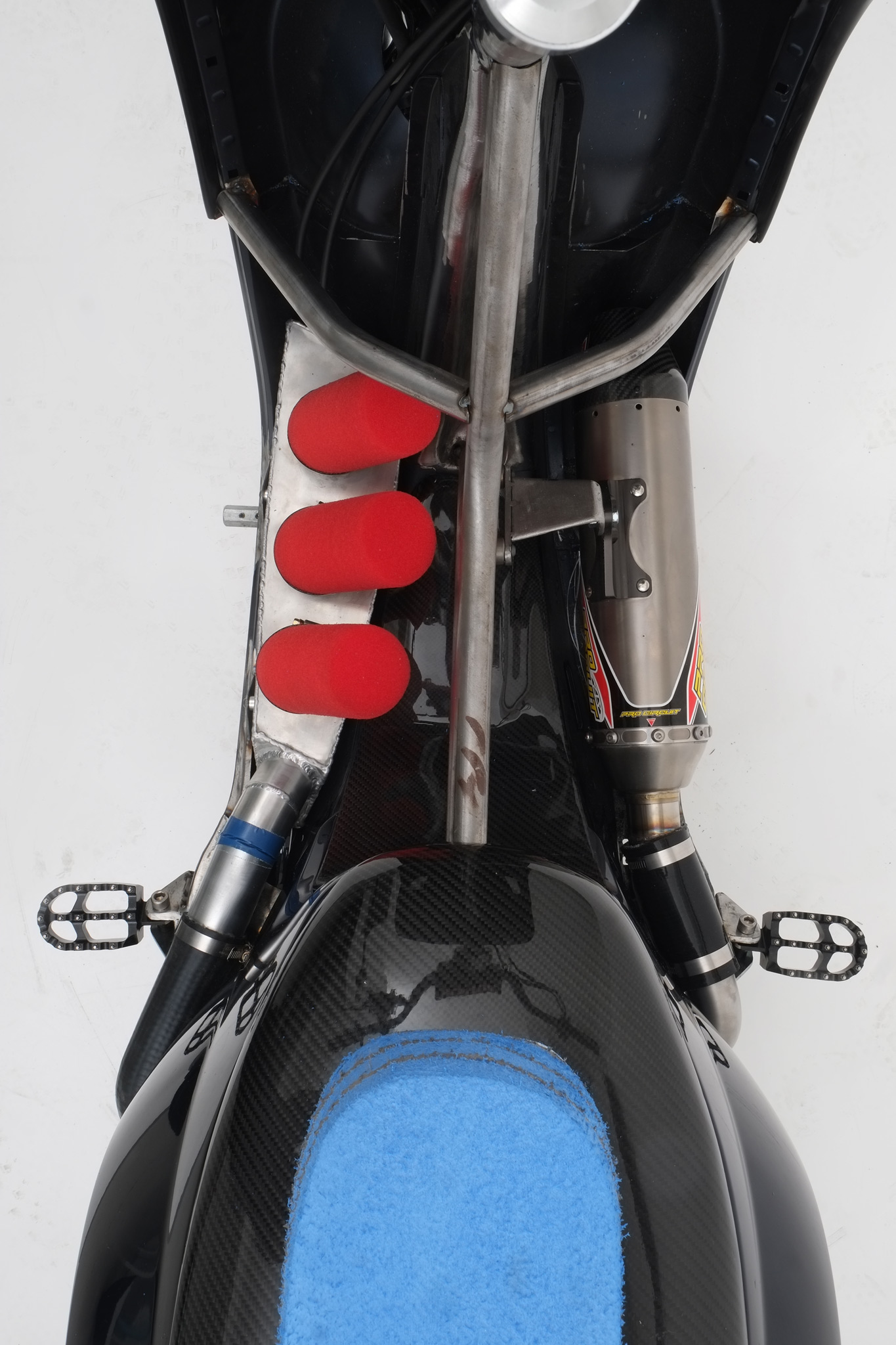 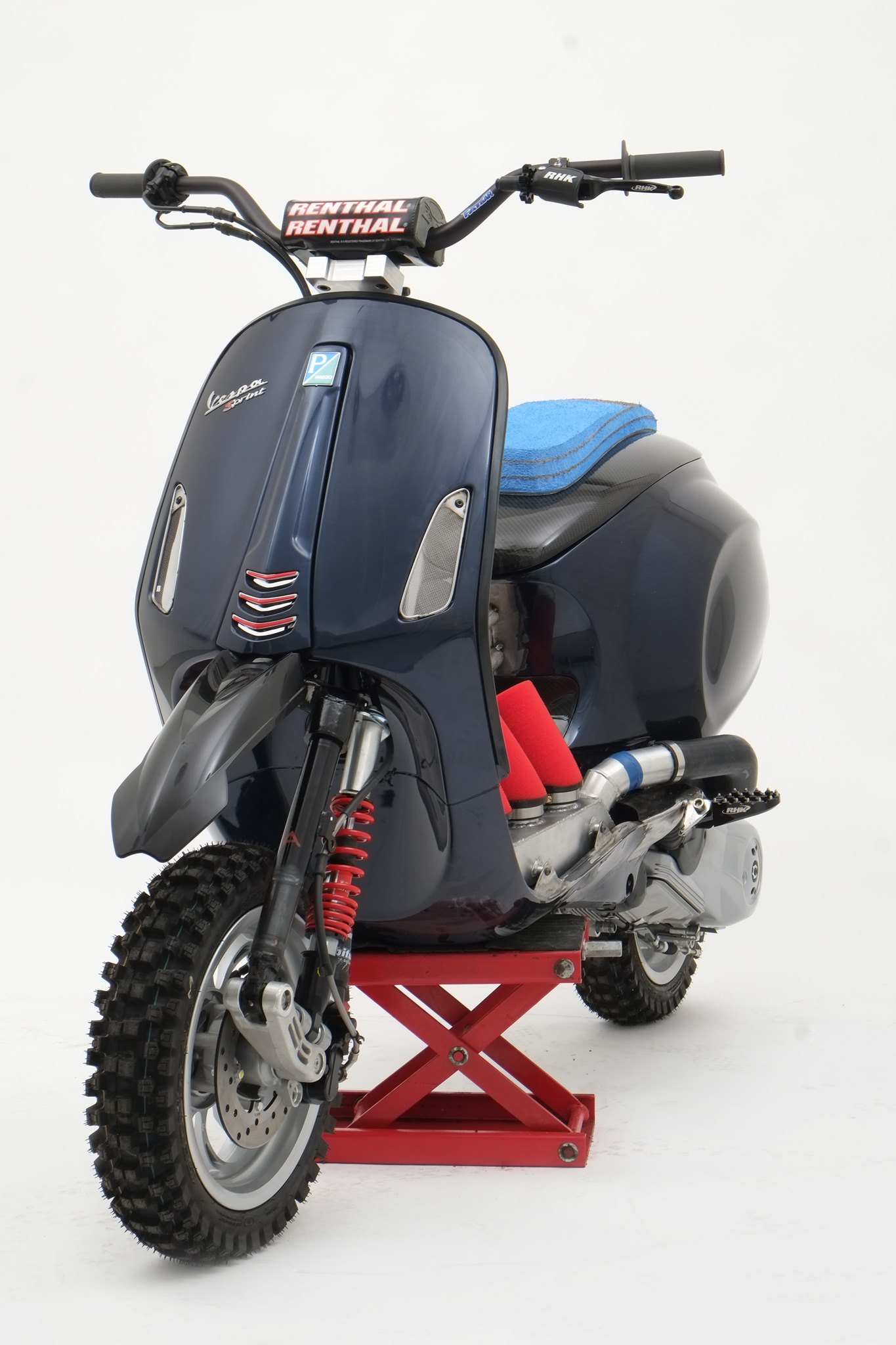 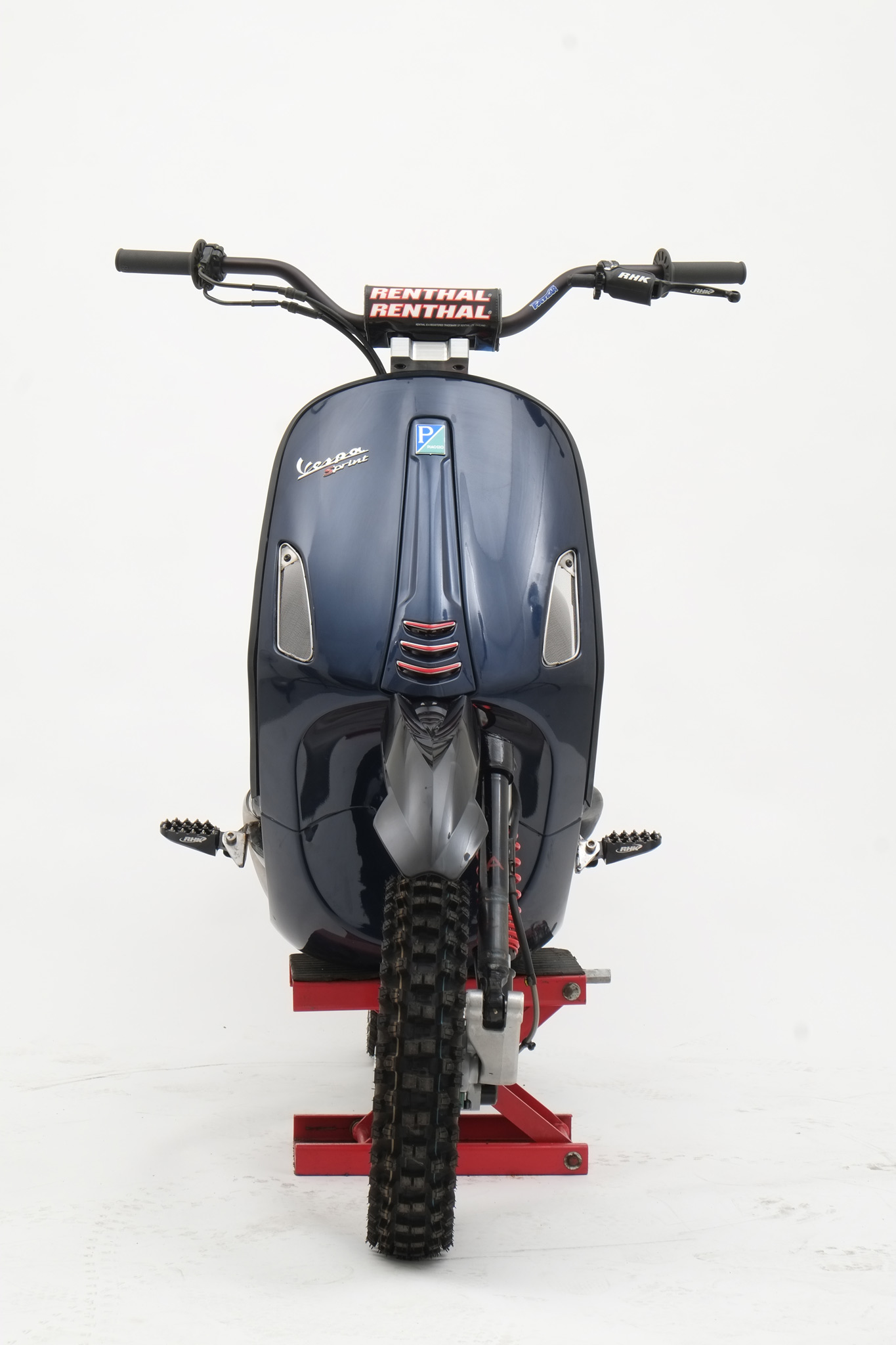 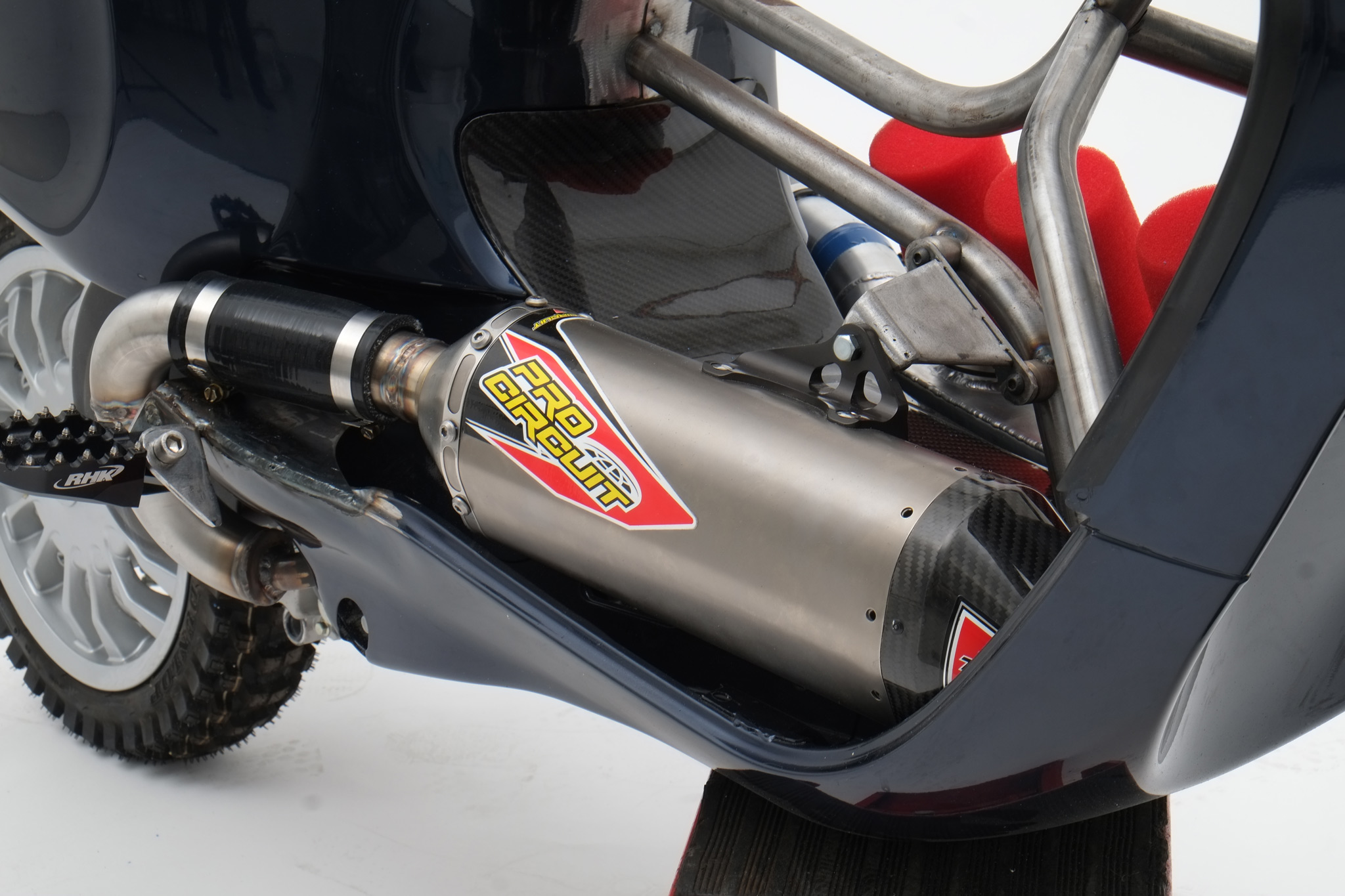 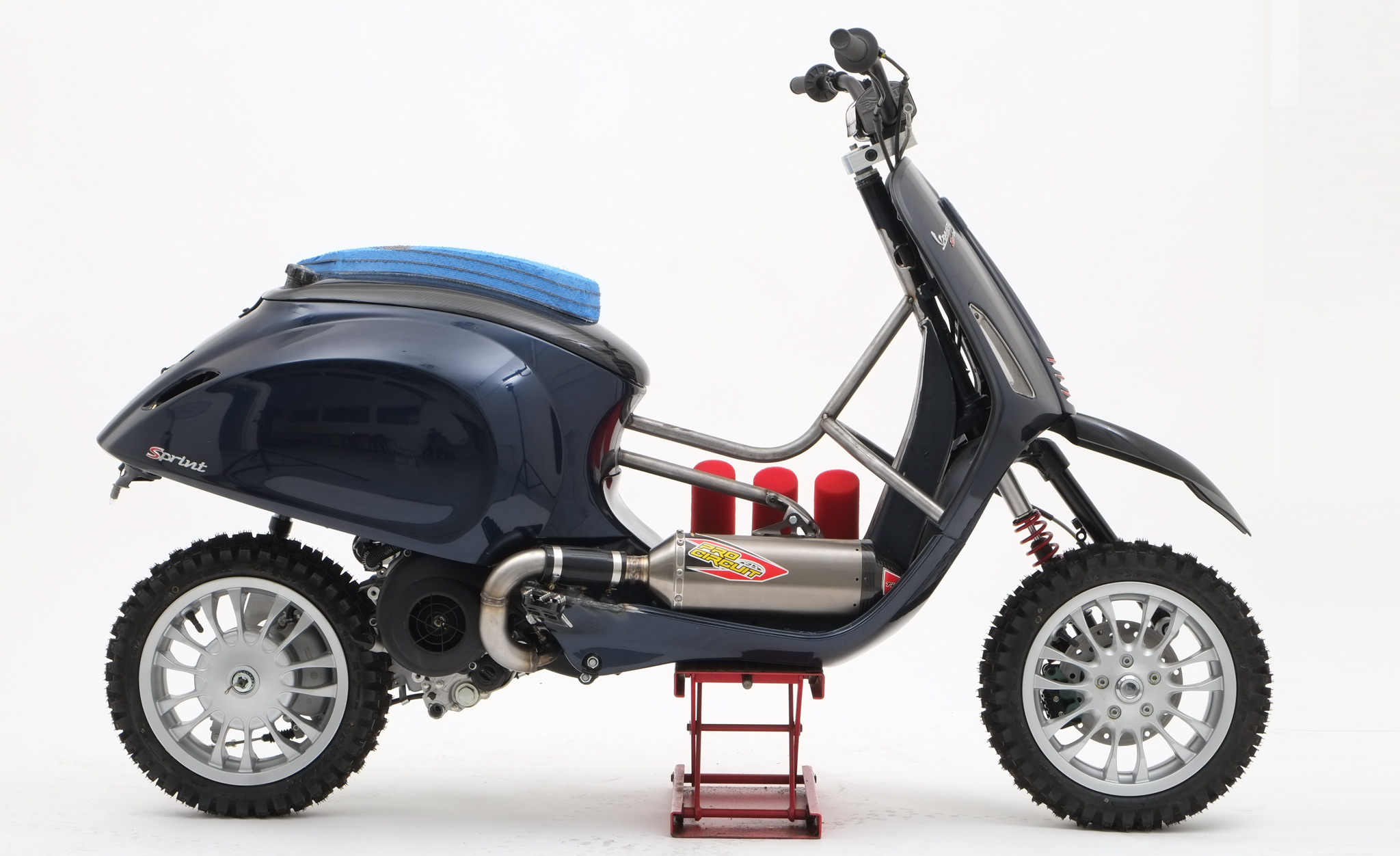 To help dodge any pesky rocks and the like, the scoot was raised up 3” and was fitted with Bitubo Nitrogen fully adjustable gas shocks along with some 12” knobbies for the front and rear. “We allowed the engine to breath better with a forward facing alloy air box fabricated by Ross at Supacustom. 3 uni filter air filters ensure this is not an asthmatic Vespa!”

The end product would be a super aggressive, nimble Vespa the likes none have ever seen. A beauty to look at – but a mean bastard. Just like the Australian bush it was built for. 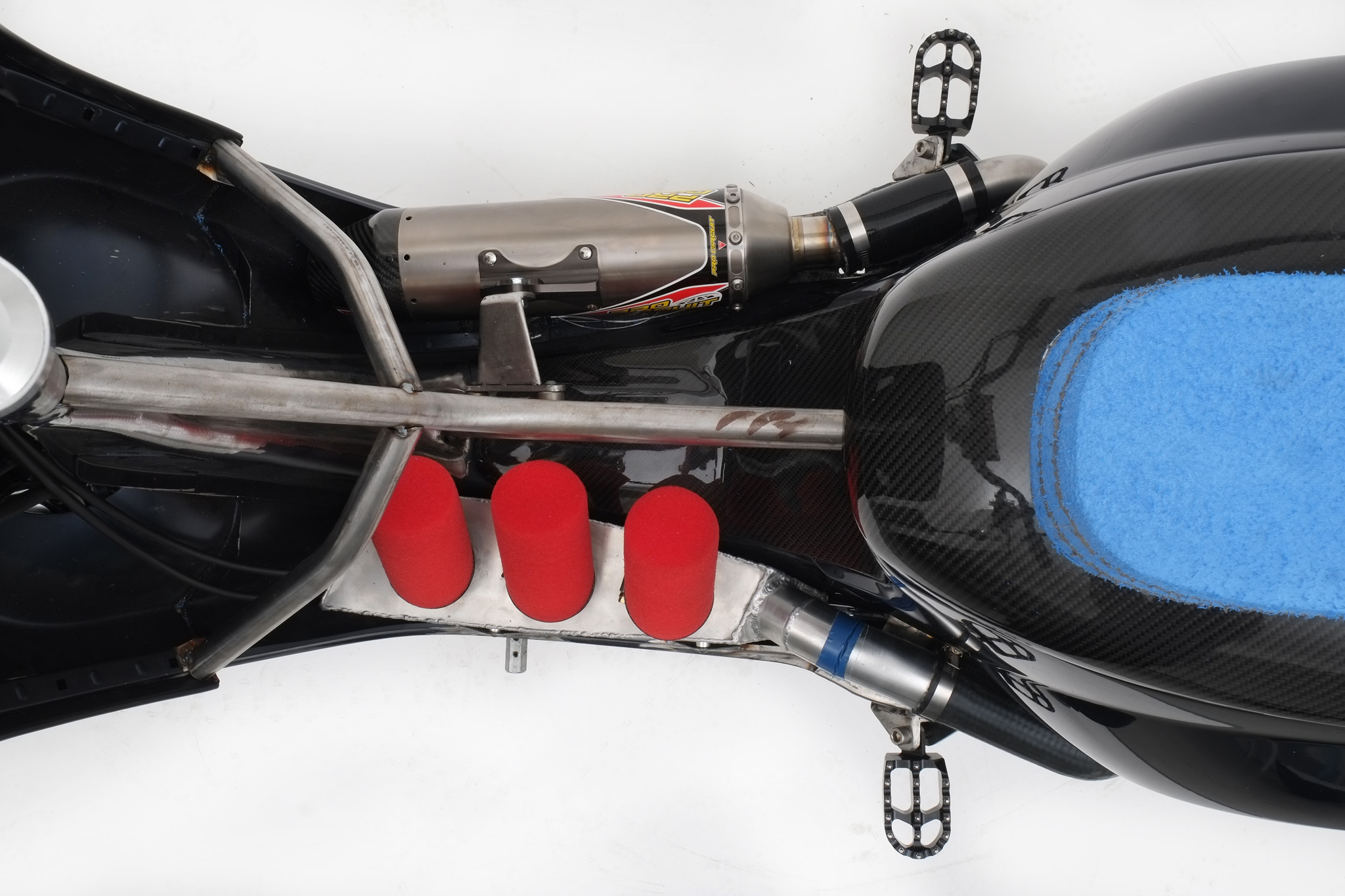 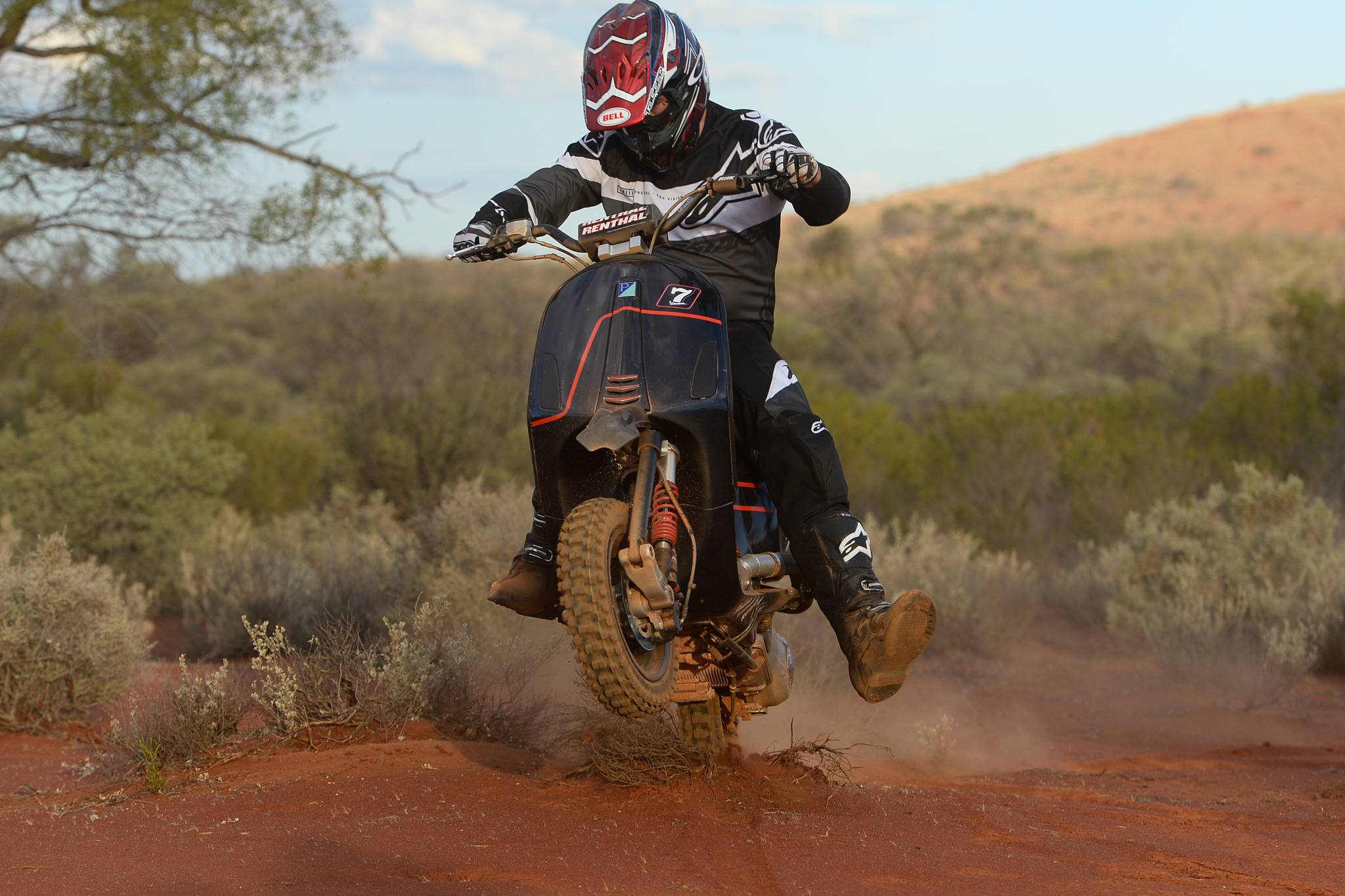 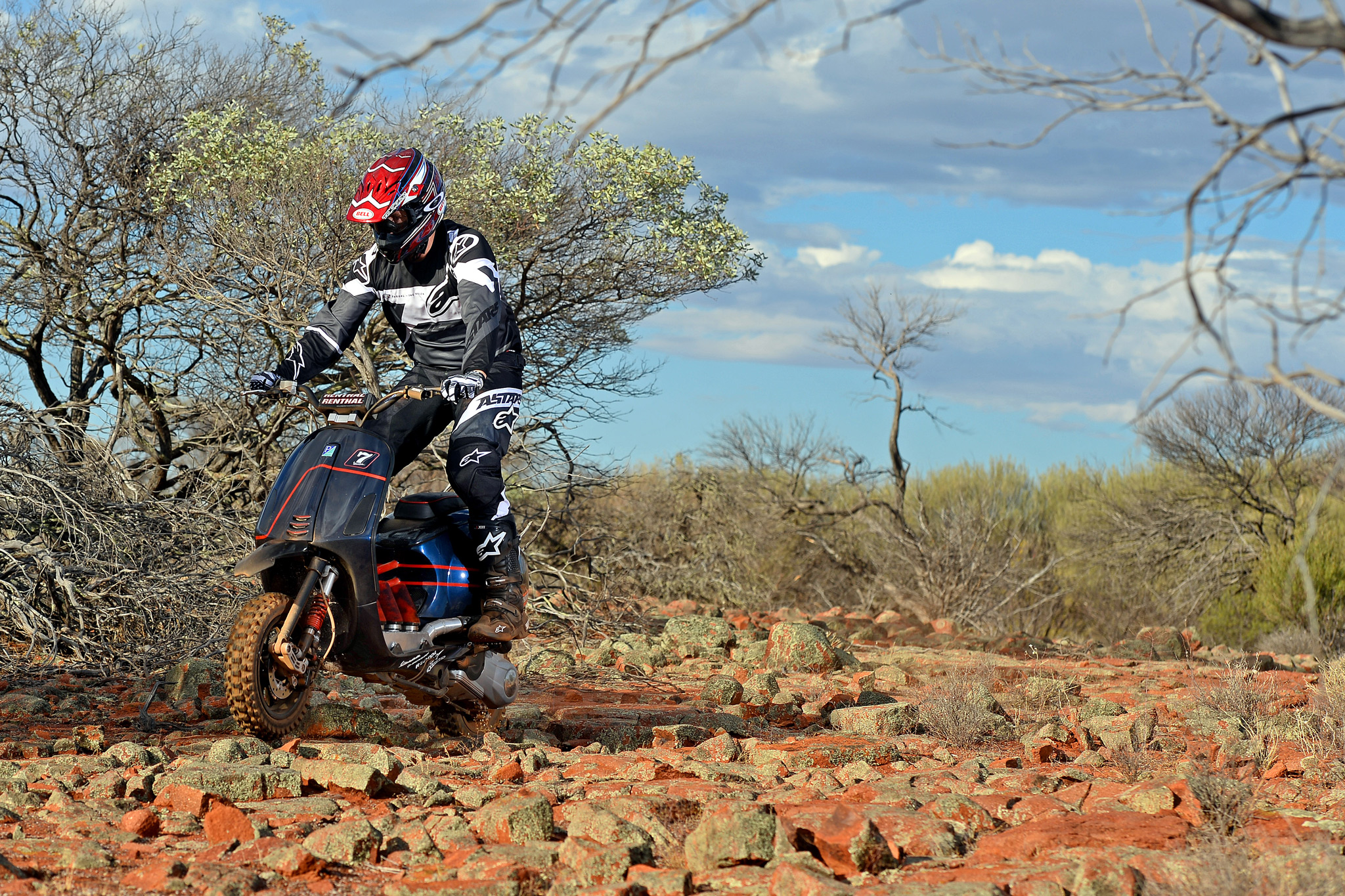 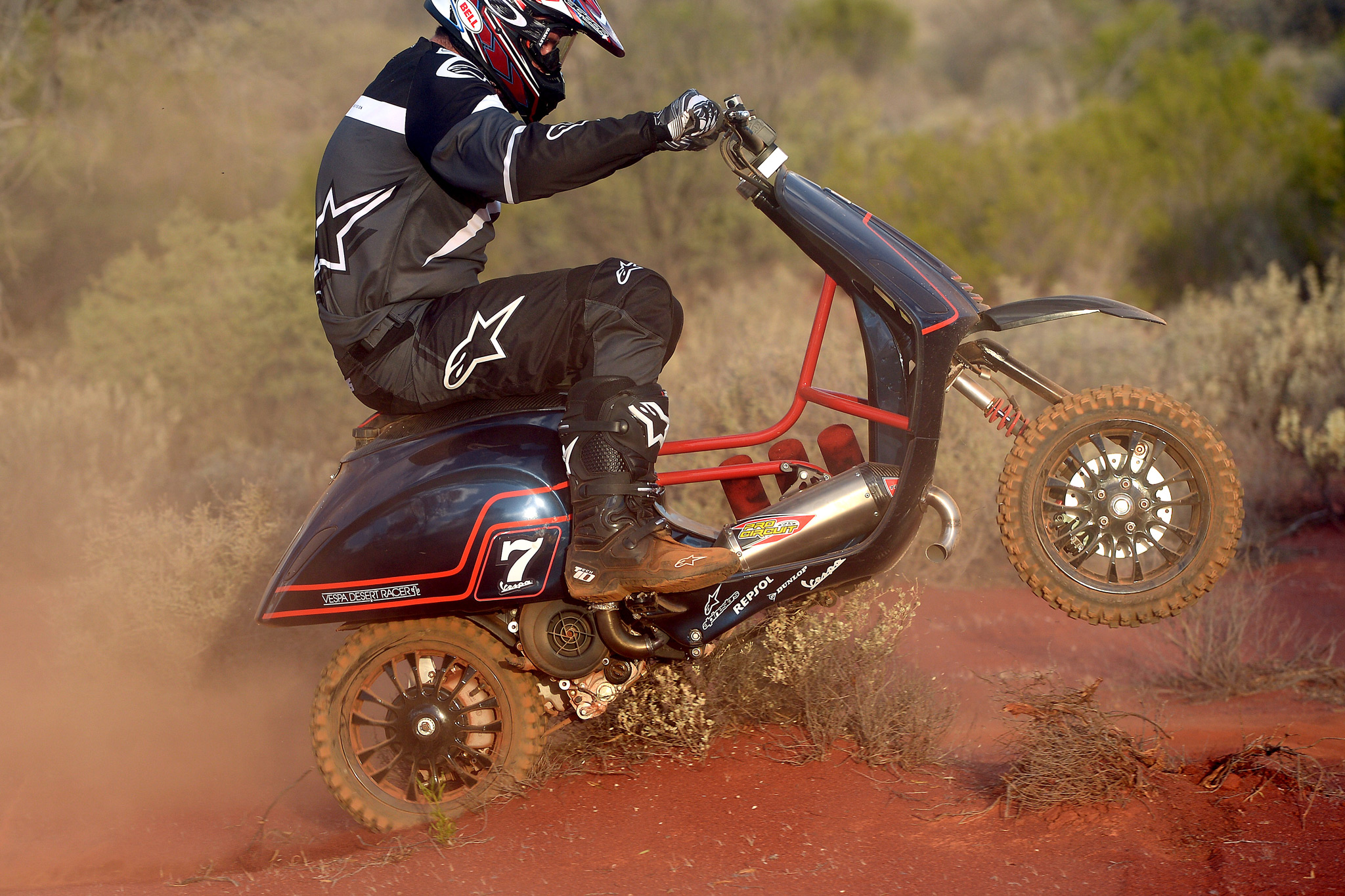 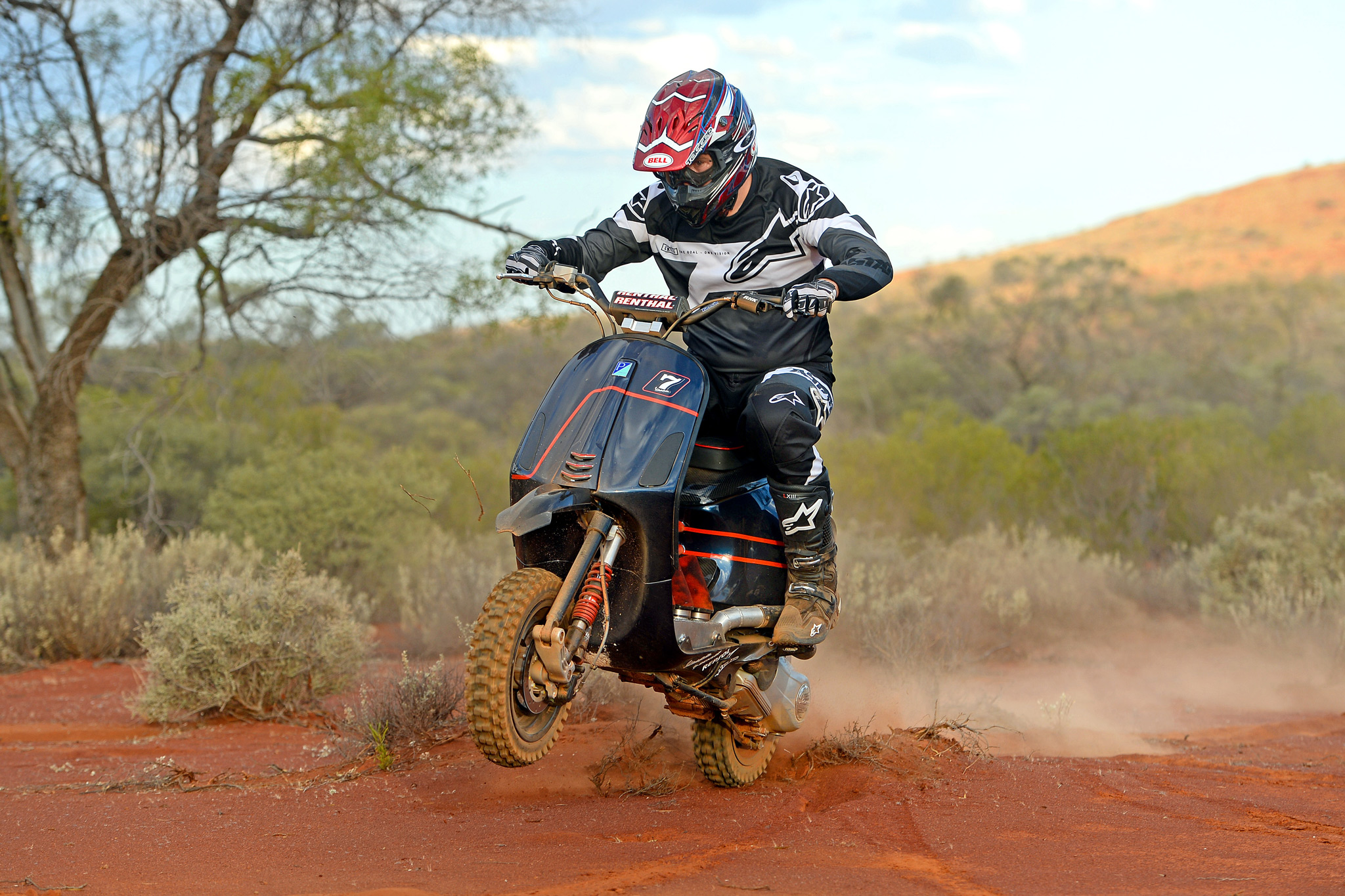 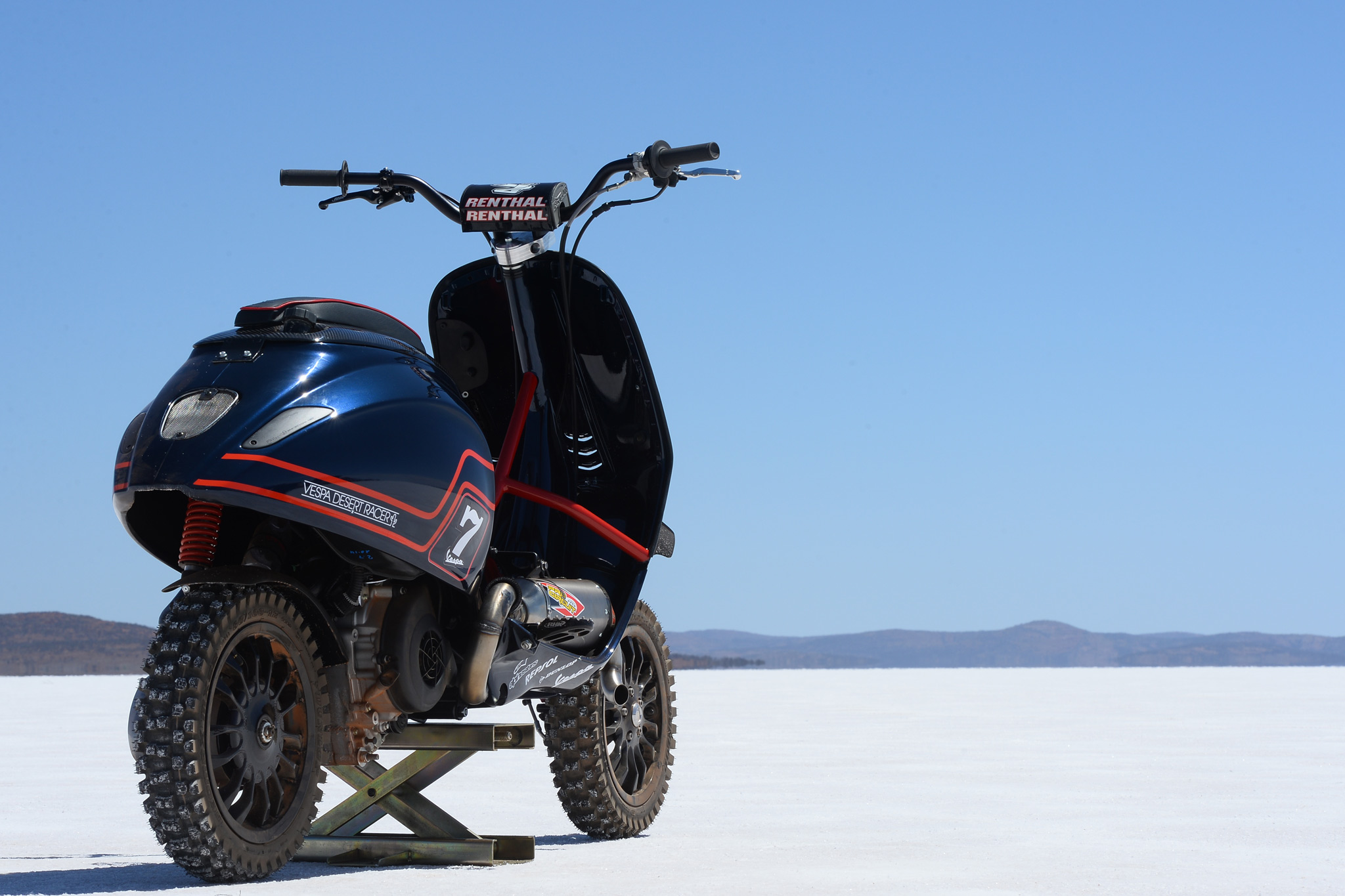 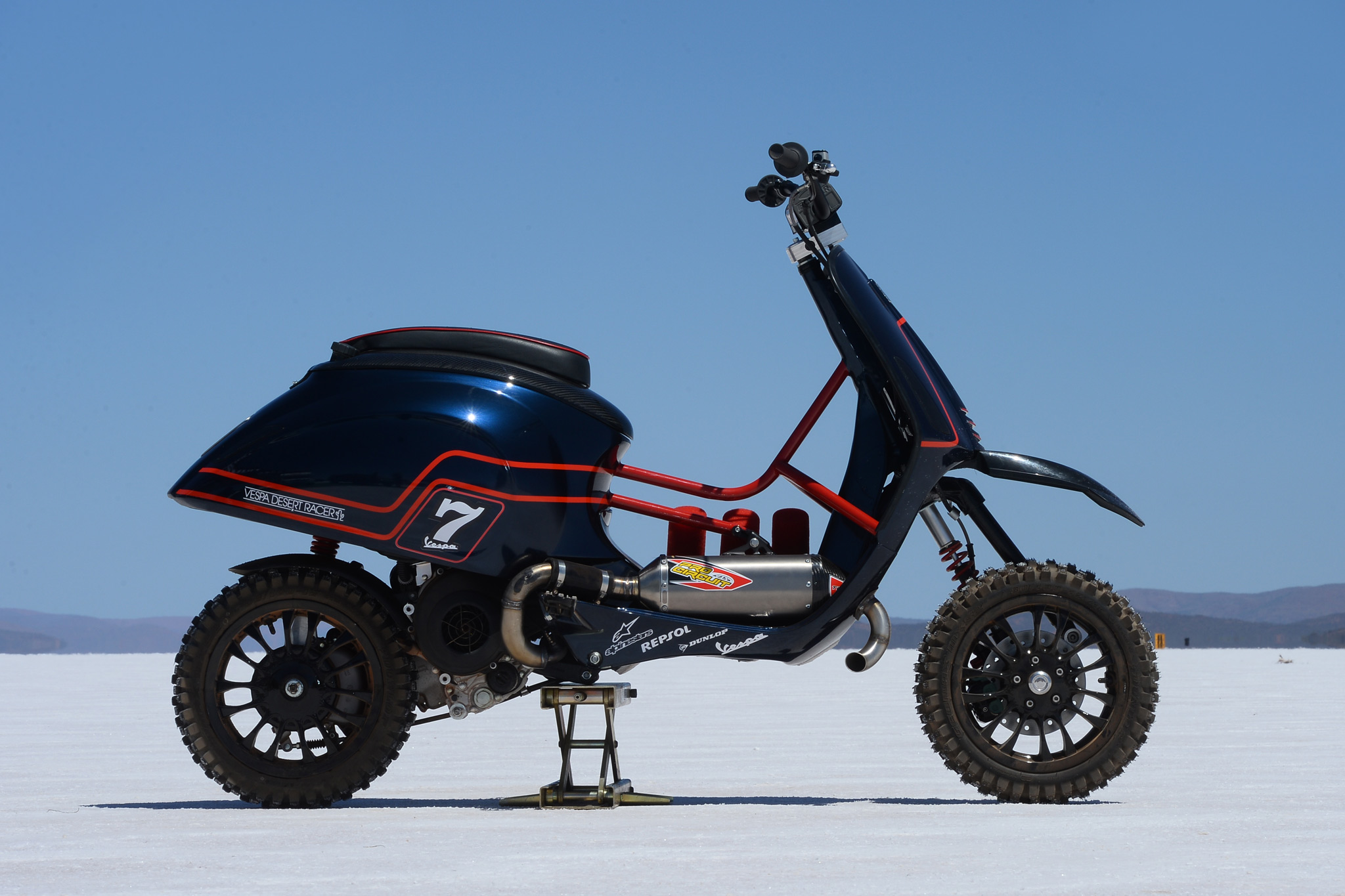 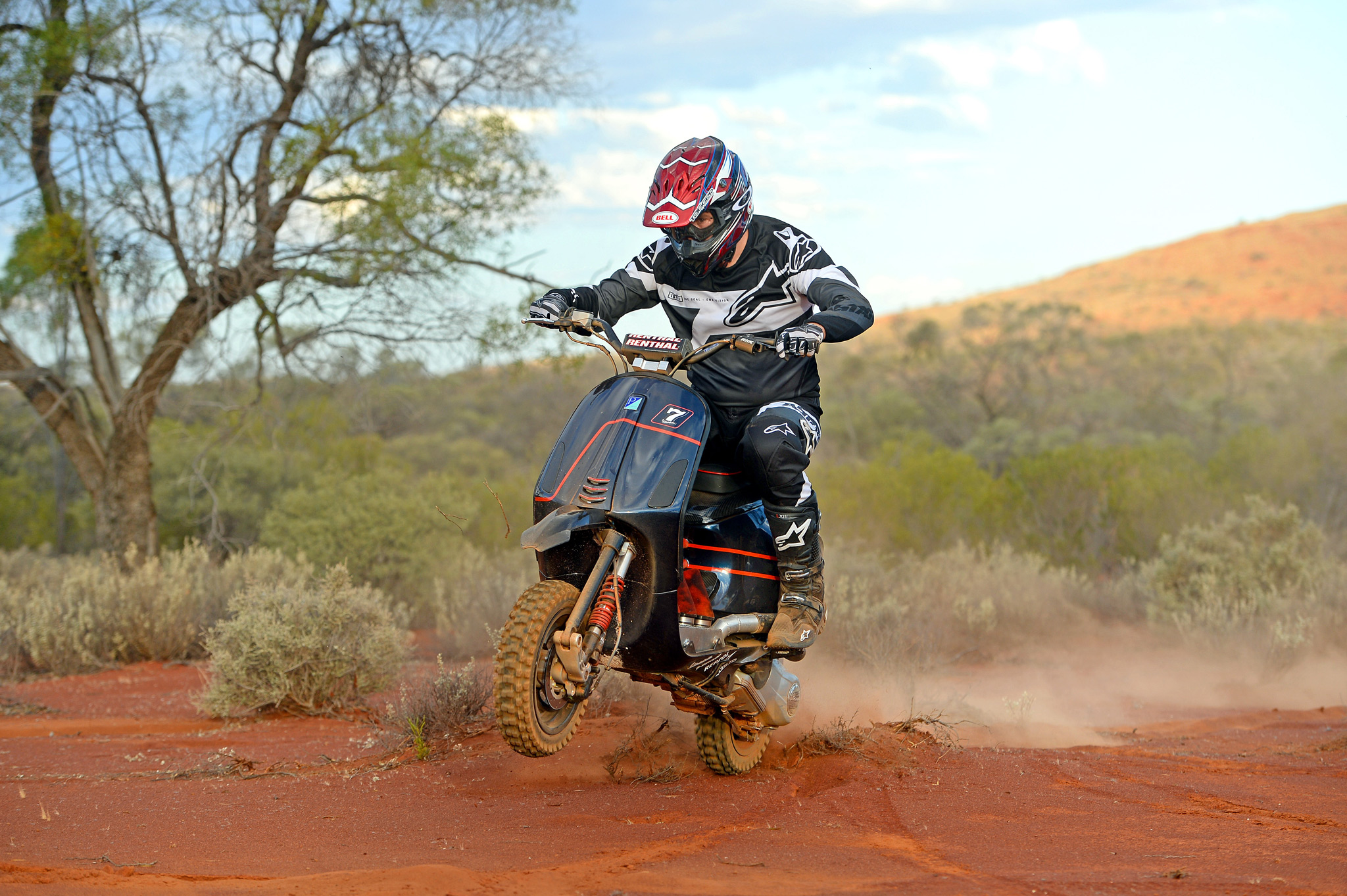 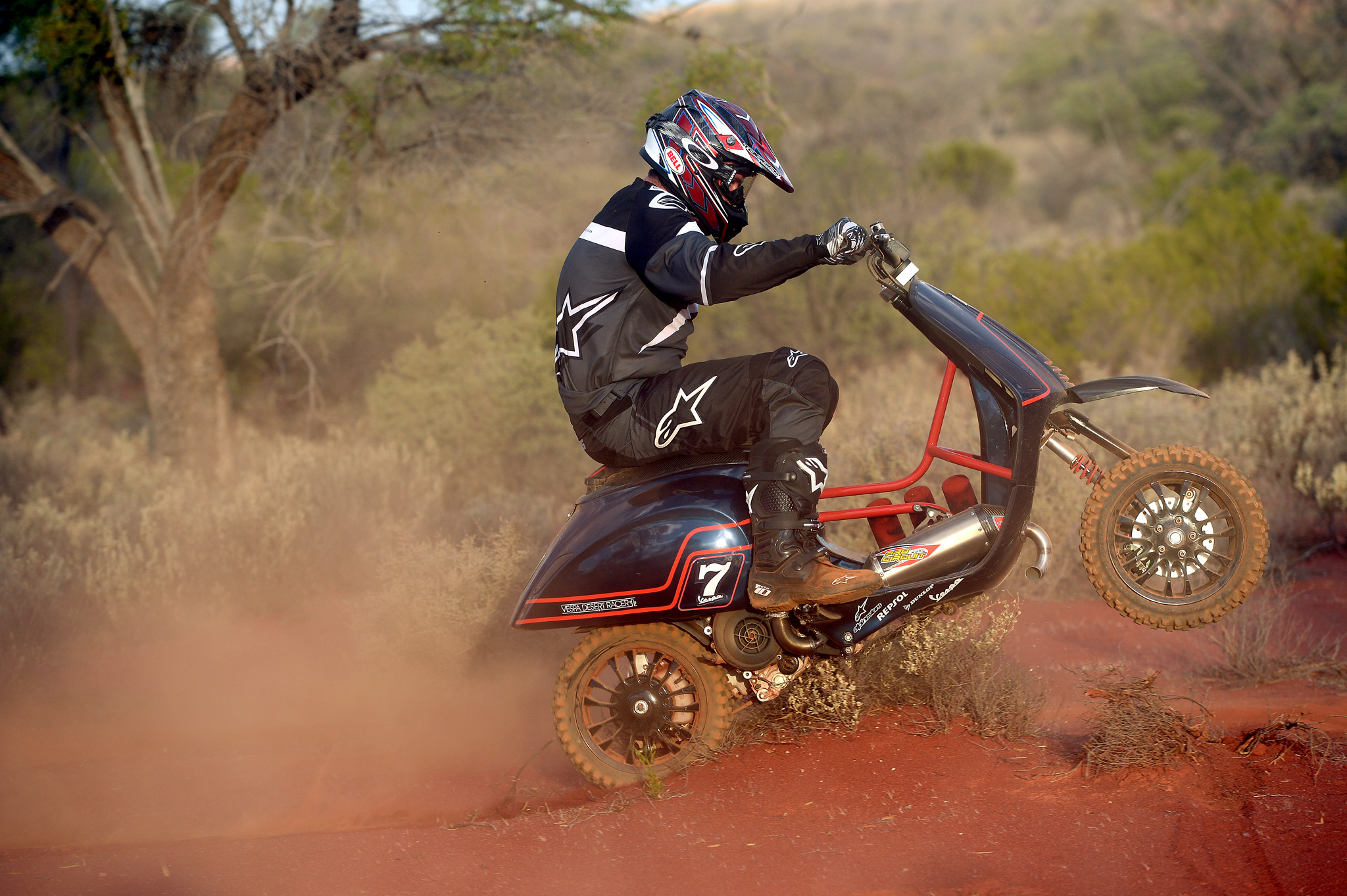 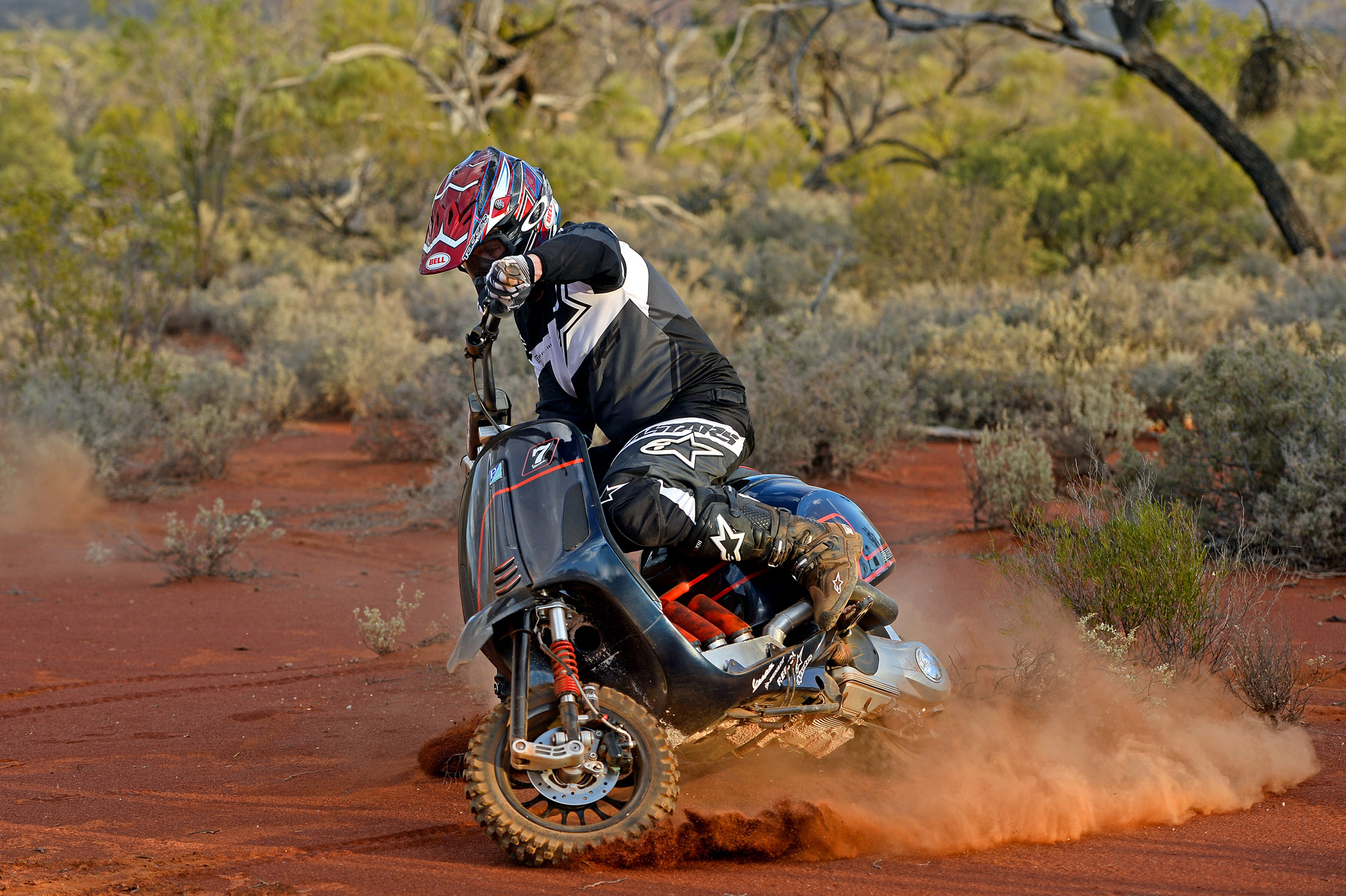 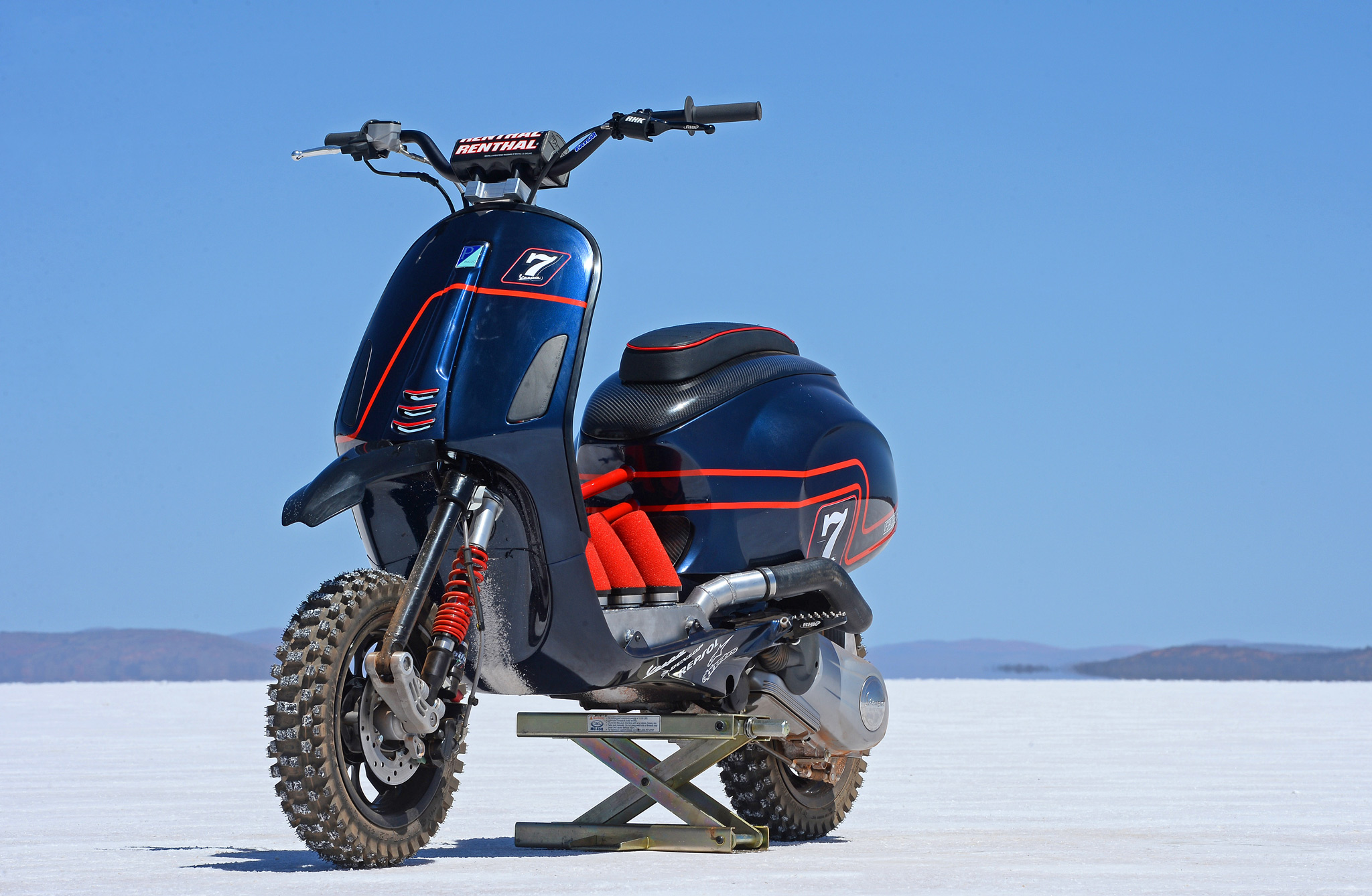 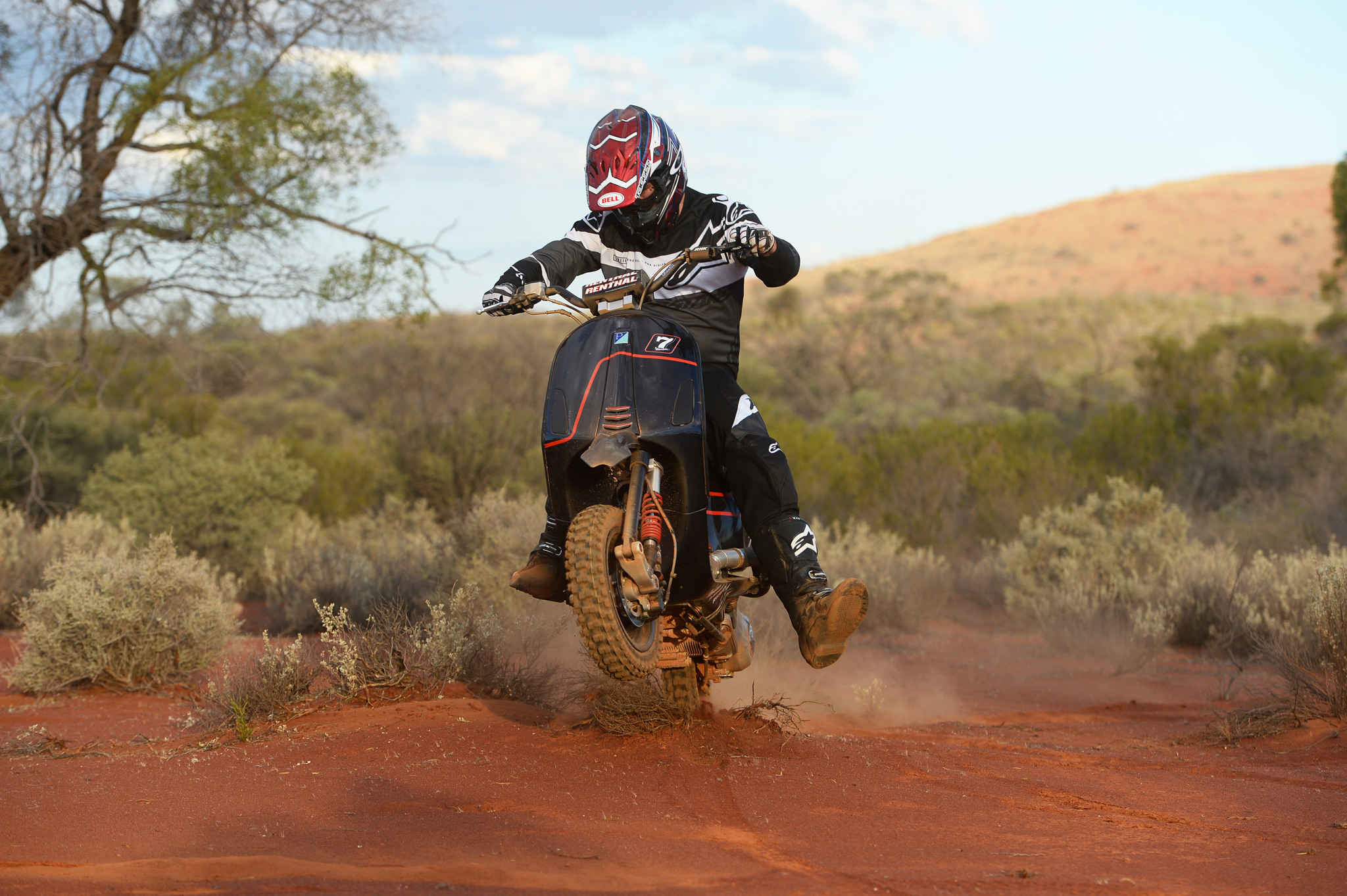