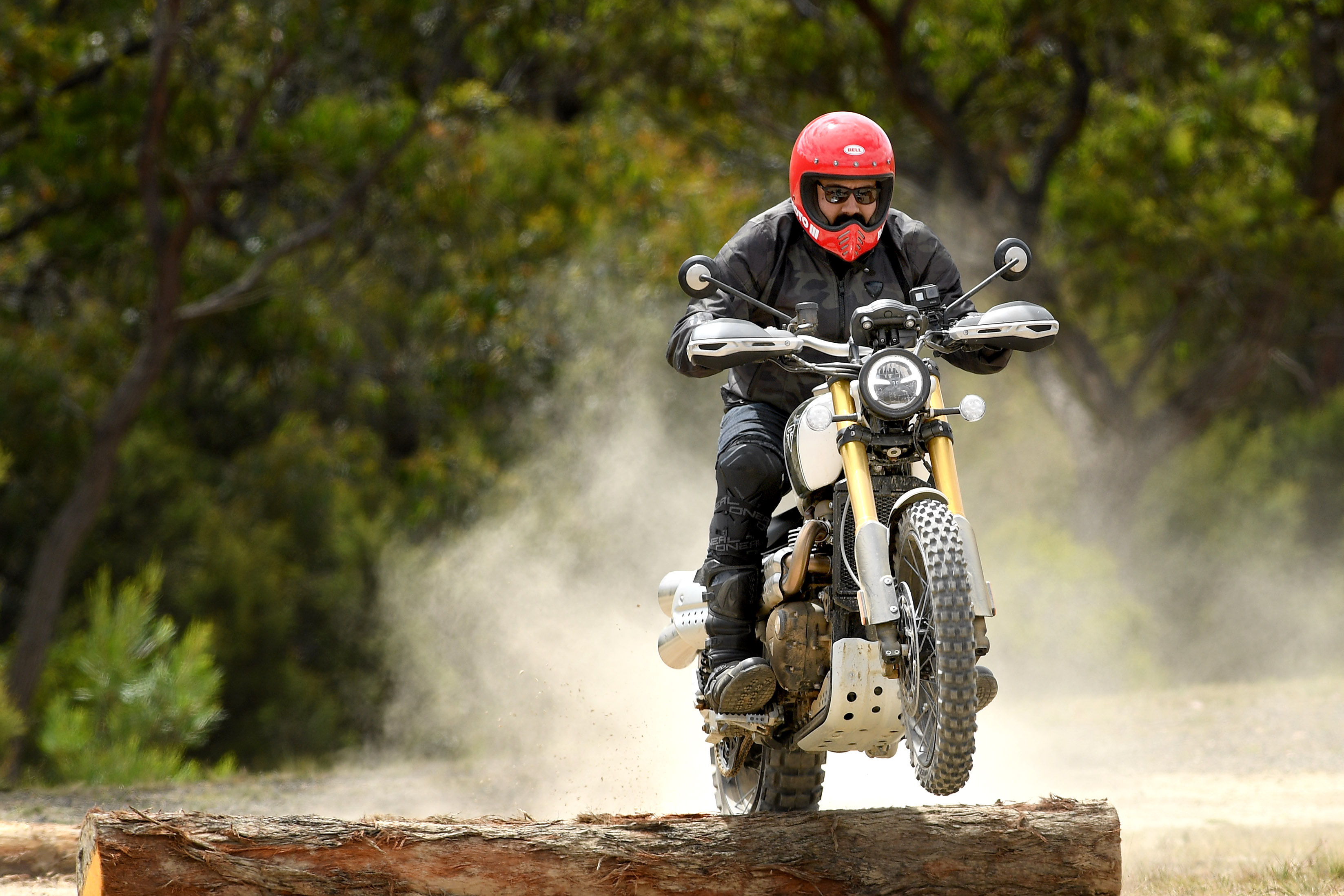 “THIS IS NOT A SCRAMBLER!” is what I shout to myself on repeat as I hit the first few corners of the famous Great Ocean Road in Australia’s south-east. Not a car in sight, my right wrist is only just warming up. Luckily, my hands are already comfortable thanks to the bike’s heated grips. From corner to corner, the 2019 Triumph Scrambler XE consistently proves that it was not only made to conquer the but the bitumen too.

The word ‘Scrambler’ became phrase in the 50’s and for motorcycles that had both off and on-road capabilities. But in more recent times this really hasn’t been the case. It’s been turned into a fashionable term, falsely giving people the hope of adventure and promising that dreaded motorcycle misnomer, ‘freedom’. However, the tide has turned and Triumph recently decided to put a wheel on a modern classic. It’s so large, I was immediately concerned that maybe Triumph  now focused on the bike’s off-road capabilities at the expense of the on-road.

However from the first corner in to the last corner out, this bike blew me away. The Showa front end with its 250mm wheel travel, coupled with the twin spring Ohlins adjustable rear suspension gives the Scrambler smooth and seamless movement from corner to corner. A little unexpected, huh? It gives you the stability and the confidence to push it relatively hard on the tarmac. At this stage, it may be difficult to imagine this bike is a “scrambler”, with the road performance being as fucking amazing as it is. My head now swimming, it begged the question: did Triumph build more street bike than dirt bike?

The engine – as beautiful as it is – has been in a few current models, like the Thruxton R and Bonneville T120. I’ve ridden these bikes, however I could instantly feel the improvements made here. First and foremost, it delivers more power and more torque. Now pushing 110 newton metres and 90 horses, it is truly more than enough of a power plant for a bike of this style. For those interested in watching their weight, the answer is 206 kilos (or 450 lbs) dry and around about 330 kilos with me on it, wet. Very wet.

The TFT display is now in its second generation, and it has features galore. There are a heap of options, including the always-amusing ability to customise the name of the rider for a friendly welcome message. Mysteriously, the morning of day two saw all the journalists welcomed with greetings that were more than a little honest…

Jokes aside, the display and overall setup is impressive, with a wide range of modes including the ability to customise your own. Traction control settings along with ABS can be turned off or on, with a bit of flexibility in between. The bike features six standard modes: Road, Rain, Sport, Off Road, Off Road Pro (or Dirt Burnout mode) and Rider, which is fully adjustable.

I used ‘Sport’ mode the most, although once we hit the mountains it started to sprinkle so I tested out the rain mode. It felt like the bike deftly rolled off the power exactly when needed to be more manageable in those conditions, which is a nice touch on such an imposing bike. As the road continued, we reached an ‘off-road testing facility’. Typically, these are places where manufacturers go to test out their vehicles for all sorts of compliance reasons. So it was sort of like heaven, I guess. This was my playground for the second half of the day; where I could truly test the off-road capabilities of the bike. Put simply, the Triumph Scrambler XE quickly exceeded the capabilities of myself.

The bike proved itself to be just as capable off-road as it was on, which is a big statement for a bike that looks as pretty as this. The modern-age scrambler game has officially been changed. This scrambler could fucking scramble, and it could scramble well. Steep down hill embankments, riding over logs, through water crossings or launched over woops – this bike could do it all! Sand, Water, Gravel, and Tarmac were all handled with ease. This truly is an everything bike. It’s the one bike you would choose if you needed to take your collection of two-wheelers and consolidate it into one big, beautiful ride. It’s basically the Swiss Army knife of motorcycles, and with a fantastic neutral riding position as well.

“The bike proved itself to be just as capable off-road as it was on, which is a big statement for a bike that looks as pretty as this.”

Other cool features include keyless ignition, a USB charger under the seat, full bluetooth capabilities, an integrated GoPro control system, Google maps on the dash, an integrated phone and music system and three-stage heated grips for those cold, lonely winter nights. When it comes to stopping, you know Triumph are serious when they use the set-up off the front end of the Street Triple RS; Brembo M50 callipers gripping down onto twin 320mm floating rotors.

Tyre-wise, it’s important to note that just like any rockstar’s backstage groupie session, there was eventually a rubber change. On road, the Scrambler was sporting the dual purpose Metzeler Tourance Tyres. And when off-road, we shifted to the Pirelli Scorpion Rally. For those curious on just how many inches I was sporting, it was a front of 21 x 2.15″ and a rear of 17 x 4.25″.

If you’re shy and don’t like conversing with people, this isn’t the bike for you. In its standard configuration, the exhaust note is louder than what you’d expect in an age where many bikes are getting quieter. No doubt, the 270 degree crank helps with such a lovely sound. The looks are stunning, from headlight design to the Monza cap, and the oval-shaped rear of the twin pipes.

This bike started conversations everywhere I stopped. There were even propositions for nude photos on the bike, although it was me offering it to a lovely old lady who wanted to take photos for her husband. Would he of appreciated it? Who knows. But what I do know is that this bike doesn’t lack character in any form, and with two colour schemes available in the XE version, you’ll be hard set deciding which to choose.