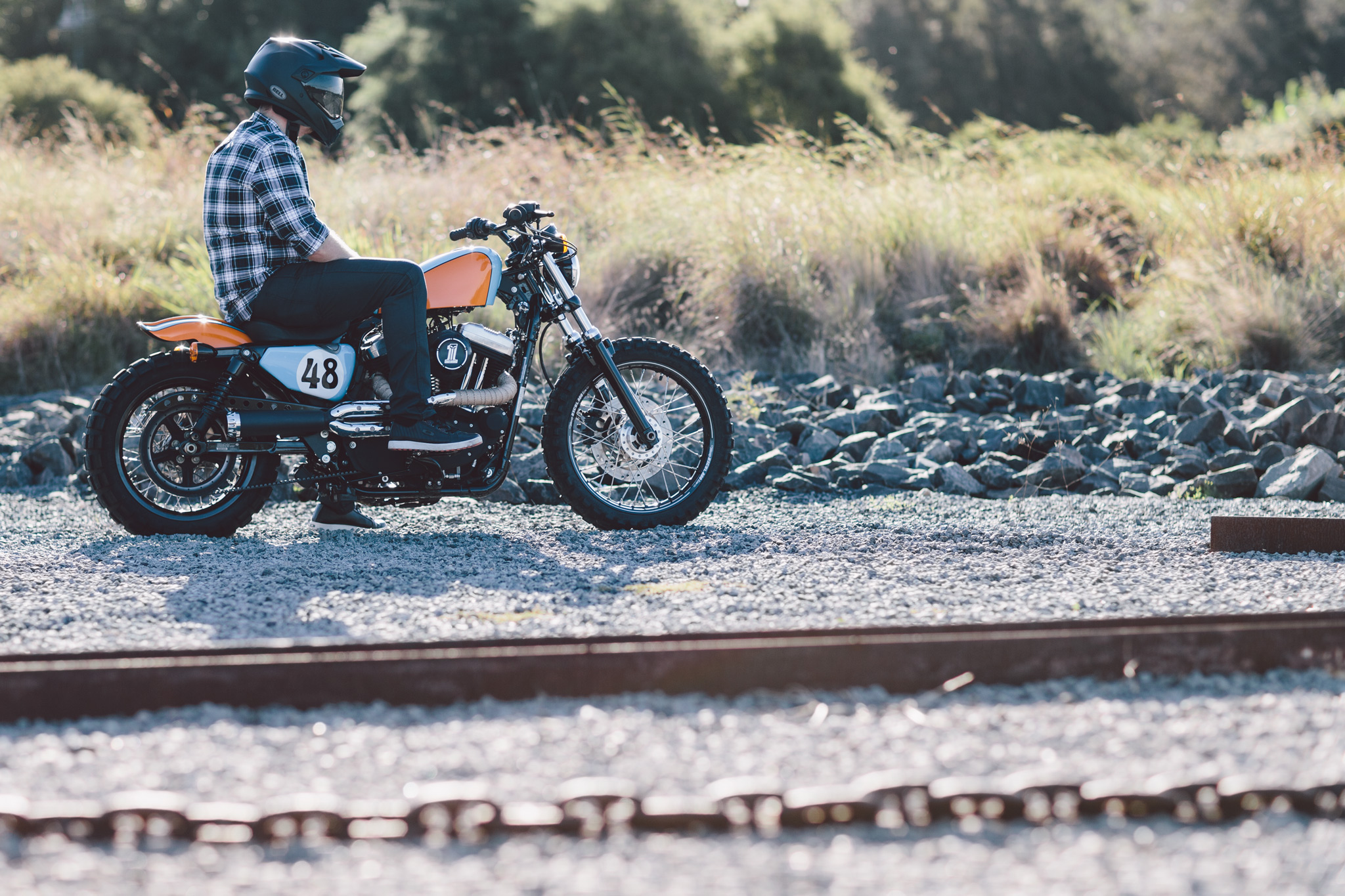 What do you do when you’re after something new, but are reluctant to sell your current ride? A complete makeover, that’s what! Introducing Troy’s Tracker inspired Forty-Eight.

Troy was bombarded with inspiration for a ‘70’s style tracker/scrambler style bike and ideas of a new ride were spinning in his head like wheels on a track. Despite having grown a bit bored of the 2012 Harley-Davidson Forty-Eight that he’d owned since brand new, he was still reluctant to sell the bike. A compromise was reached, and instead of buying another bike or selling his current one, he’d give the Harley a thorough makeover.

Funneling all this inspiration into his HD, the bike took on a more nimble, aggressive profile while still holding onto the low down V-twin feel of the ever-popular HD 48. “I have always liked the scrambler and street/flat tracker style bikes, and had the idea of building one on my mind for years. I was keeping my eyes open for the right project, something like a Yamaha XS650 or SR400. I had the Forty-Eight for 3 years and was itching for something new, but couldn’t bring myself to sell the bike. Then it hit me. Stop looking for a bike to build a tracker/scrambler, just use the Forty-Eight!”

The tyres would be the first step in this transformation. After trawling through countless different types, Troy came across the Continental TKC80’s. “The only problem with that tyre however was that they weren’t made to fit a 16” wheel, so what came next were custom wheels with a 19” front and 17” rear using stainless steel spokes and alloy rims.” 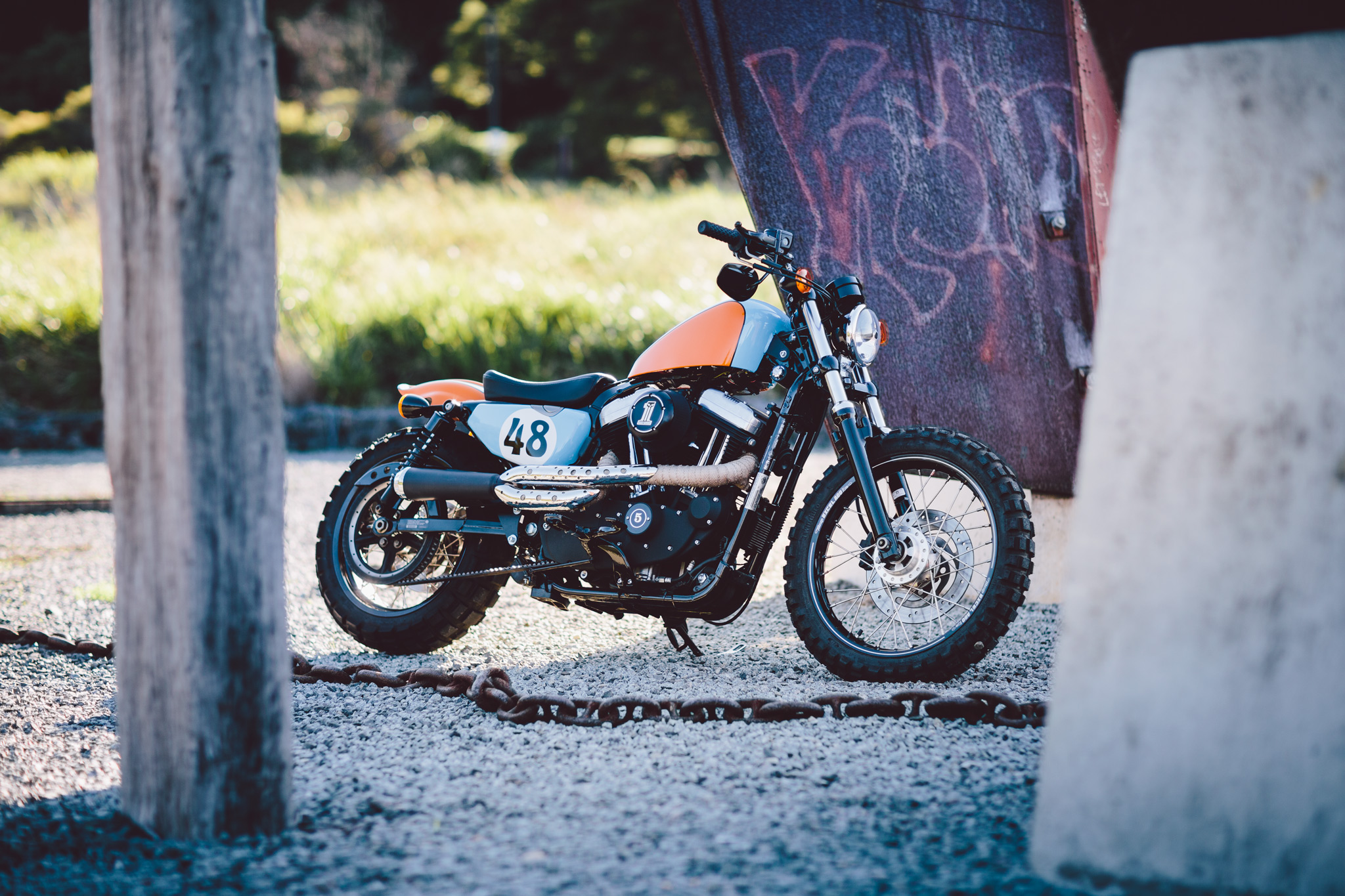 The next change for the Harley was the handlebars; going for Biltwell 1” Moto style bars to help push across the tracker feel this bike was embracing. “The exhaust was next in line for a change, I chose the Vance & Hines Tracker 2 into1 pipes, with some wrap to add a bit of contrast to the black V-Twin engine.”

The rear fender is from an earlier model Sportster, but with some minor adjustments to fit the Forty-Eight. Some other subtle changes include the tail lights being pulled into the rear fender struts, wiring has been hidden under the fuel tank with the coil relocated on a custom mount between the rocker box covers.

Foot controls and pegs were replaced with Biltwell pegs, and were relocated from the stock forward position to a mid control position. In honour of Gulf Oil Racing, the bike received the famous powder blue and marigold orange colours with a vinyl wrap, bringing a good bit of colour to an otherwise typically black model of bike. It’s all the about the simple but effective changes on this bike that make the end result look so damn good. 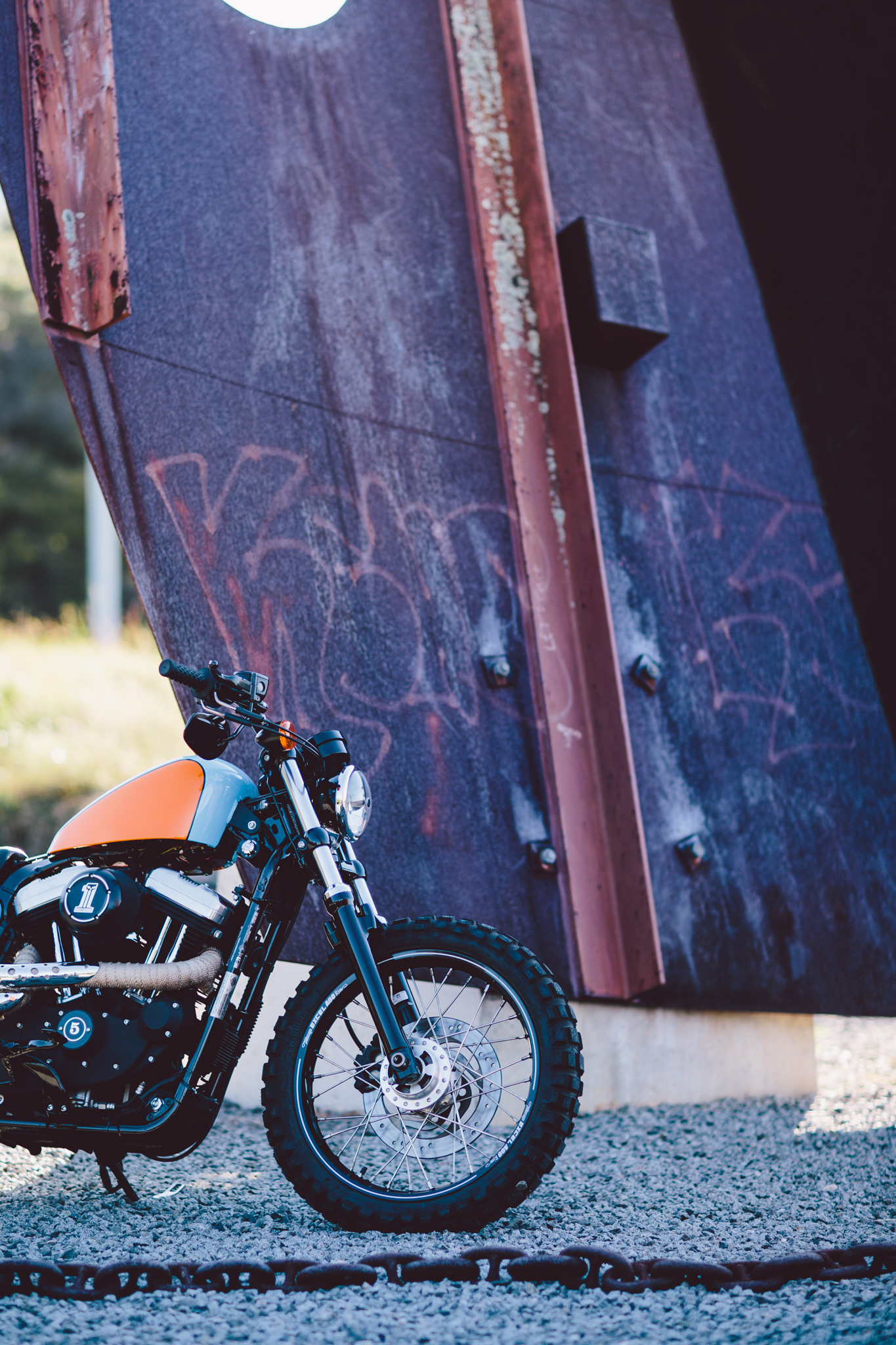 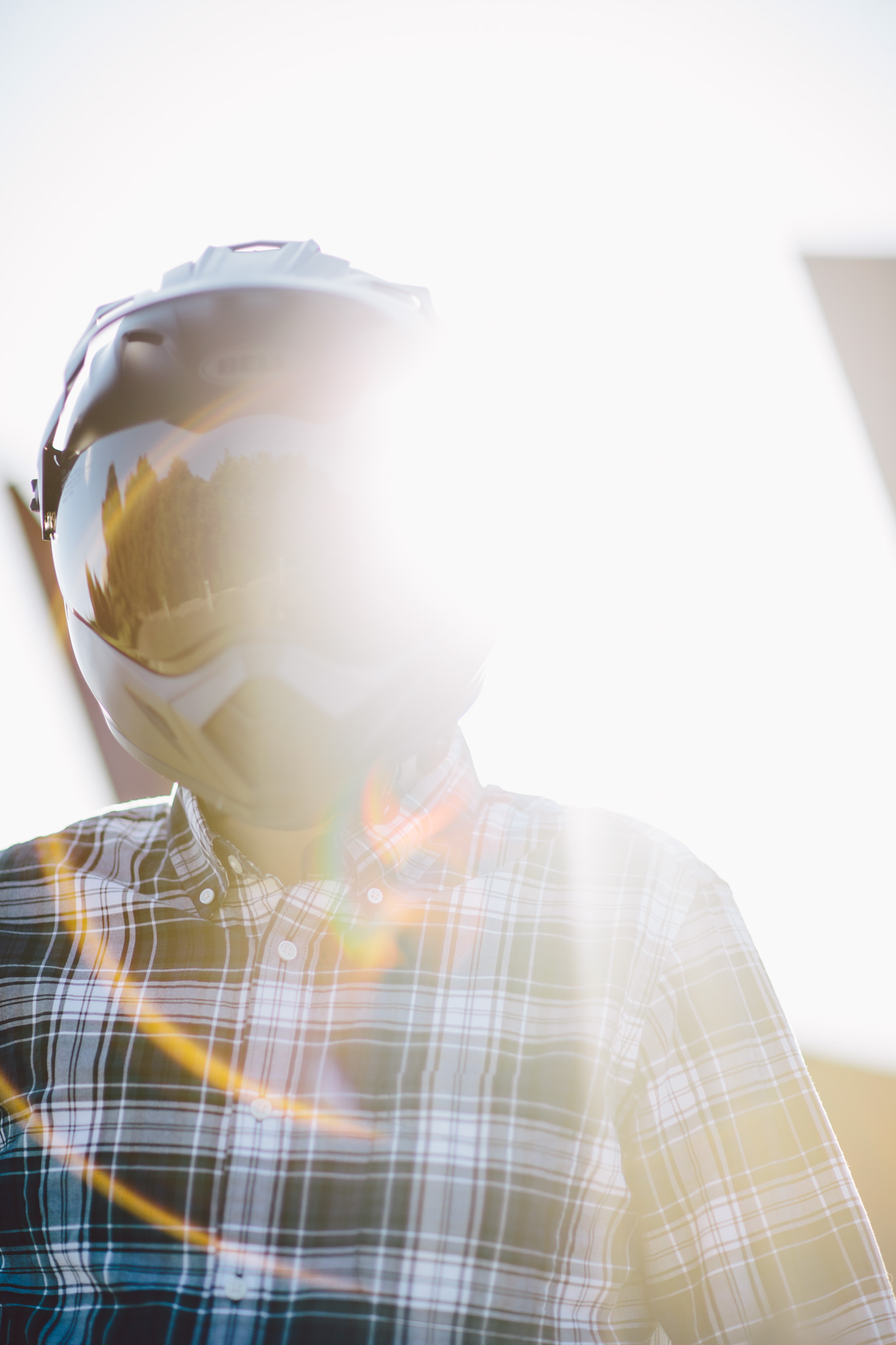 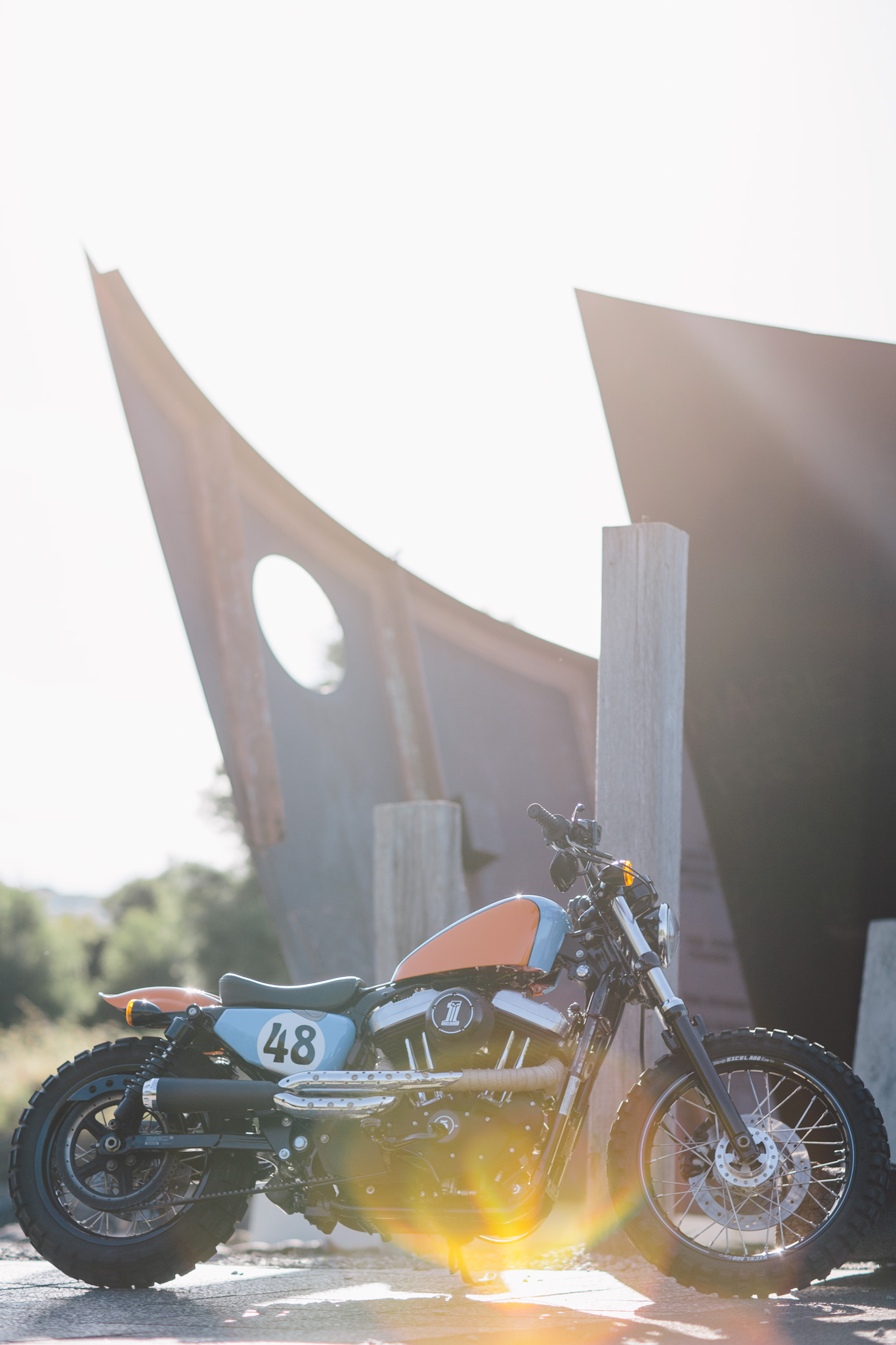 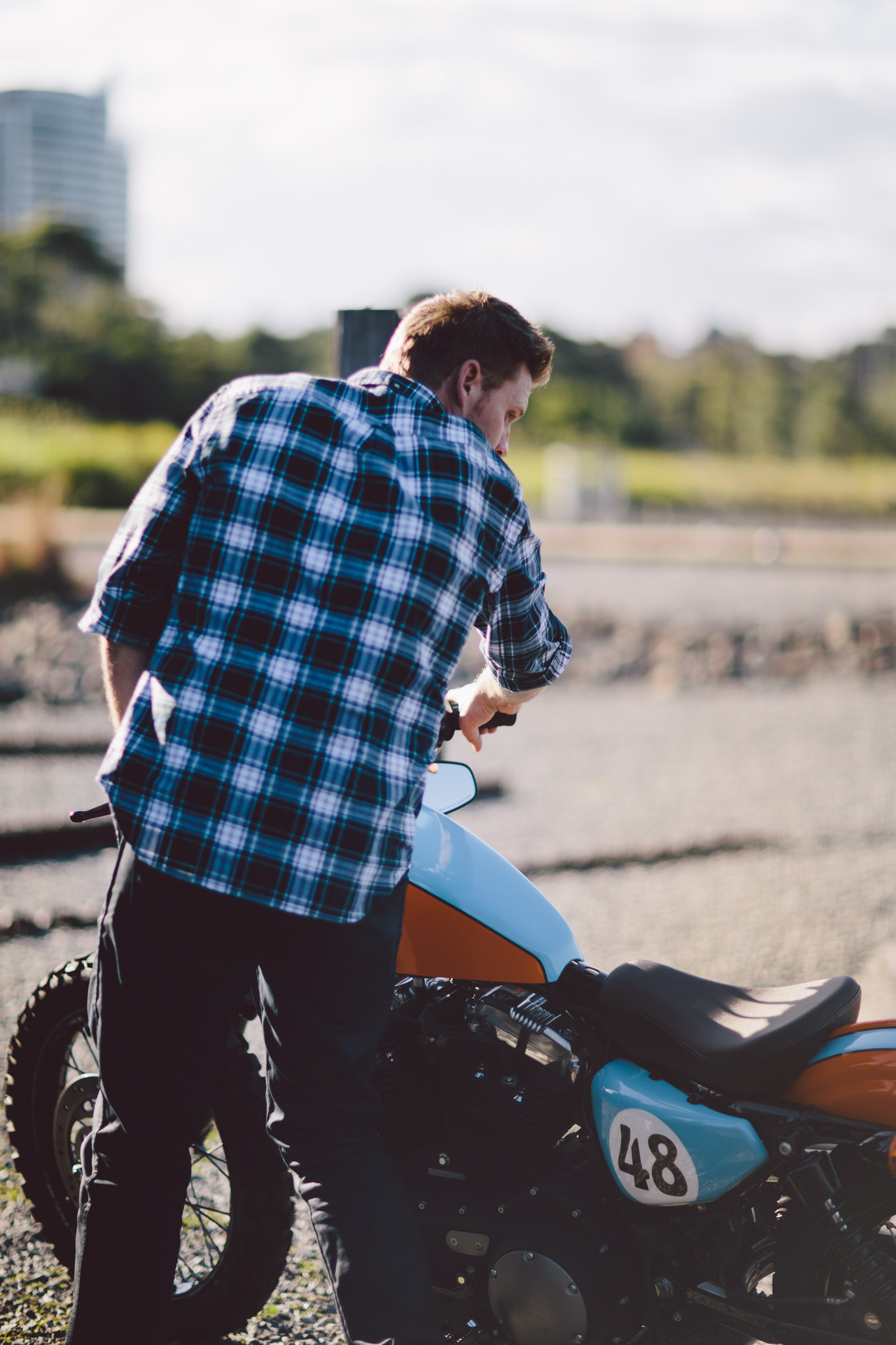 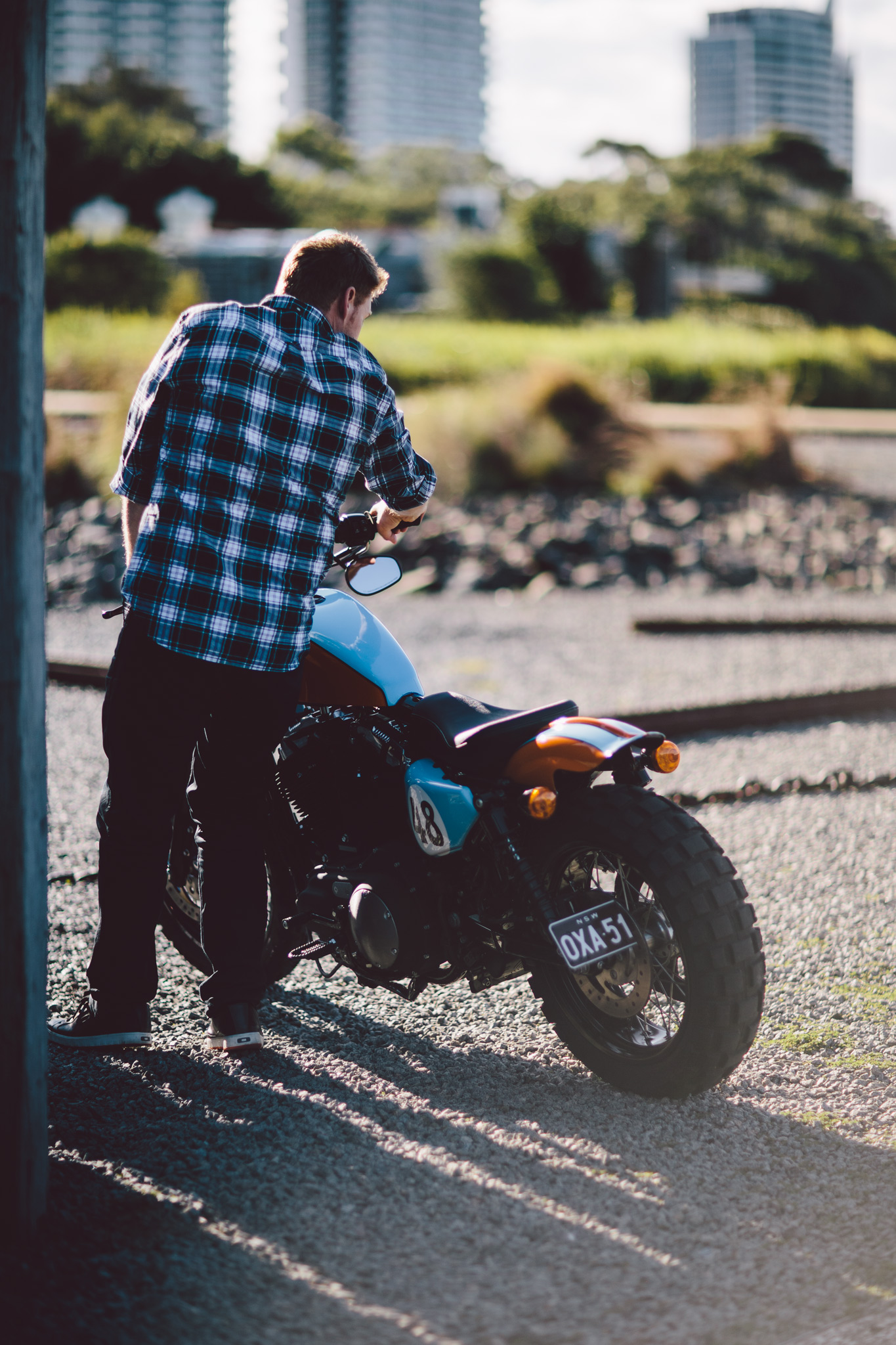 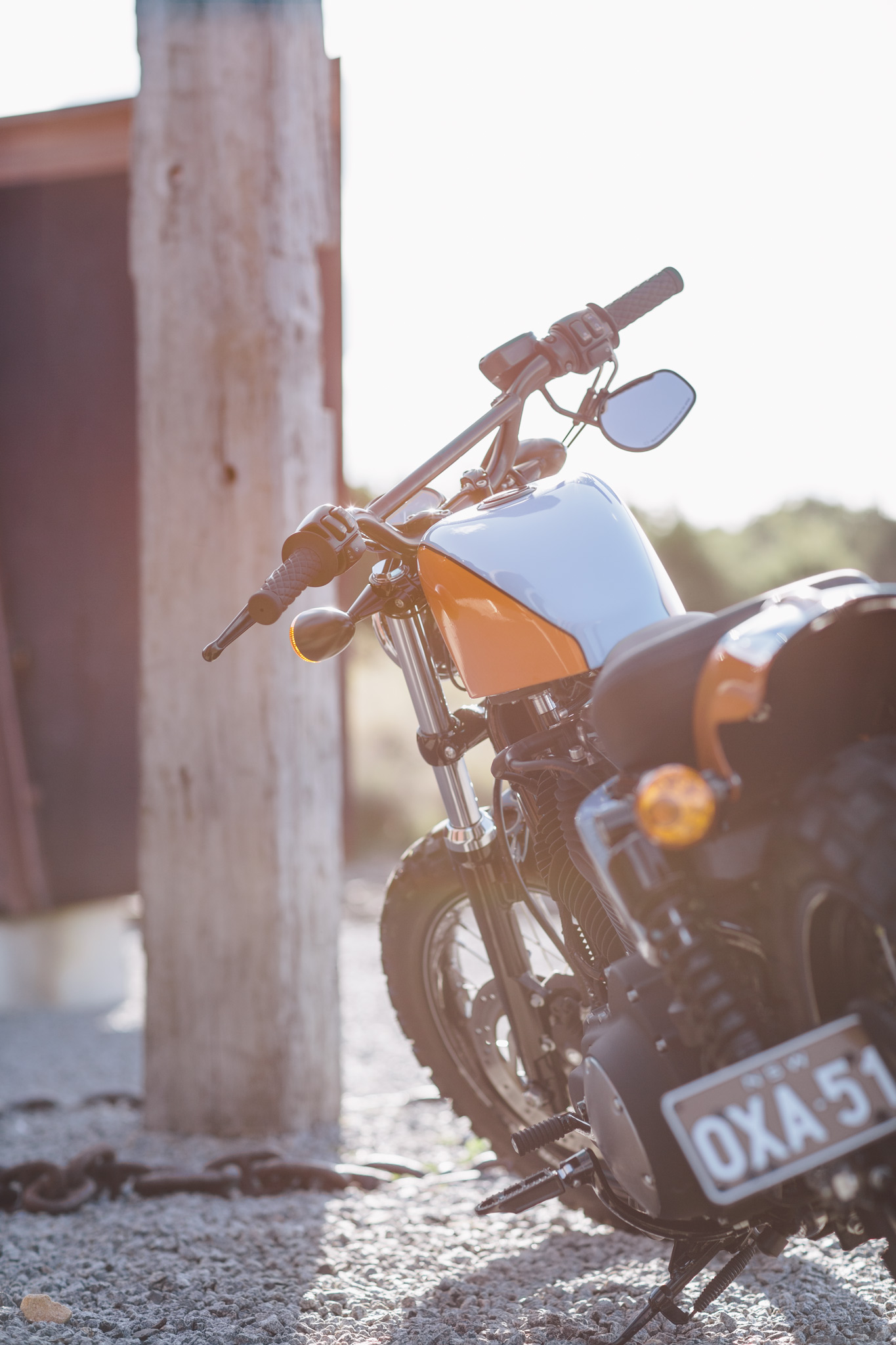 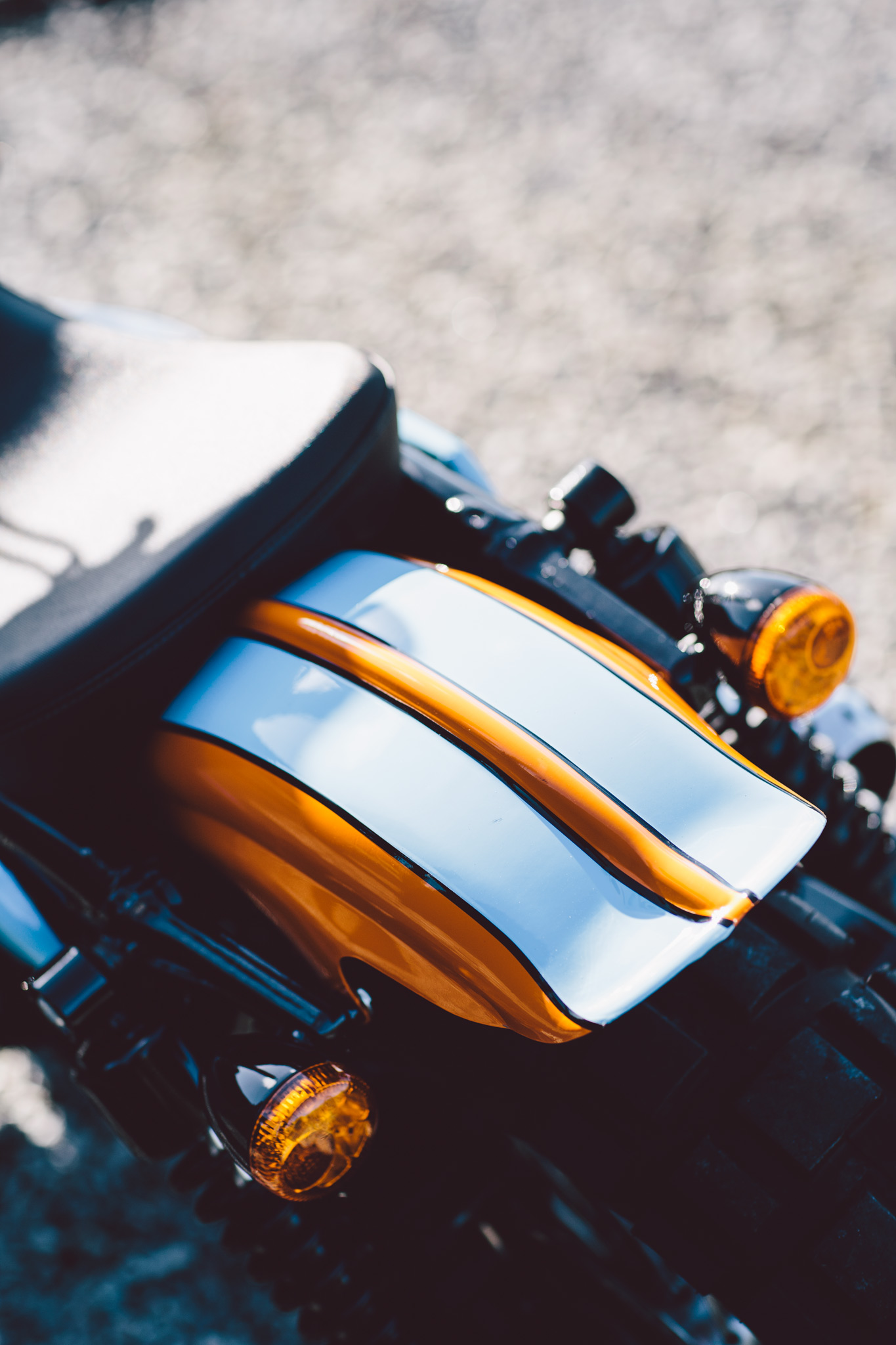 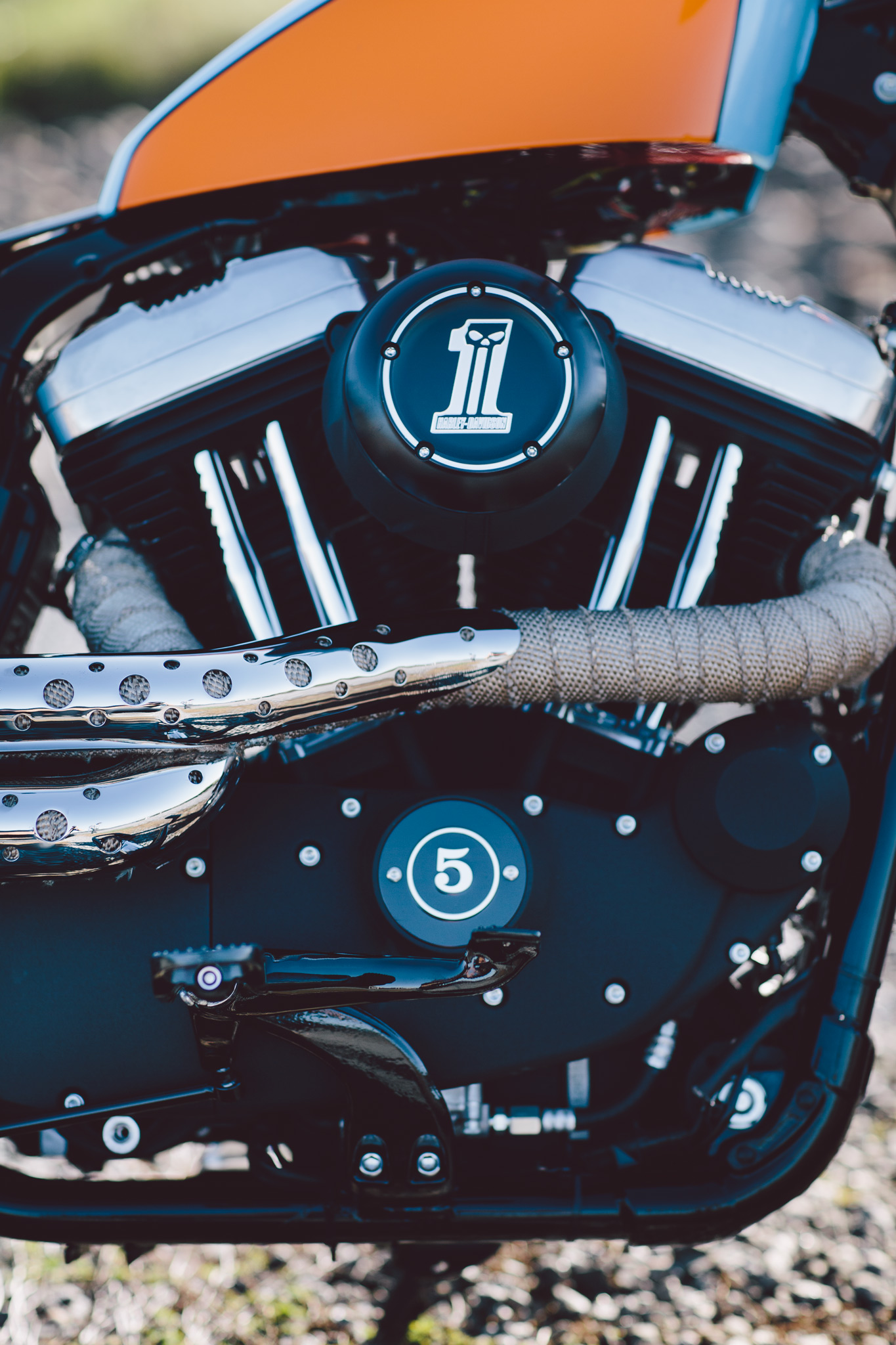 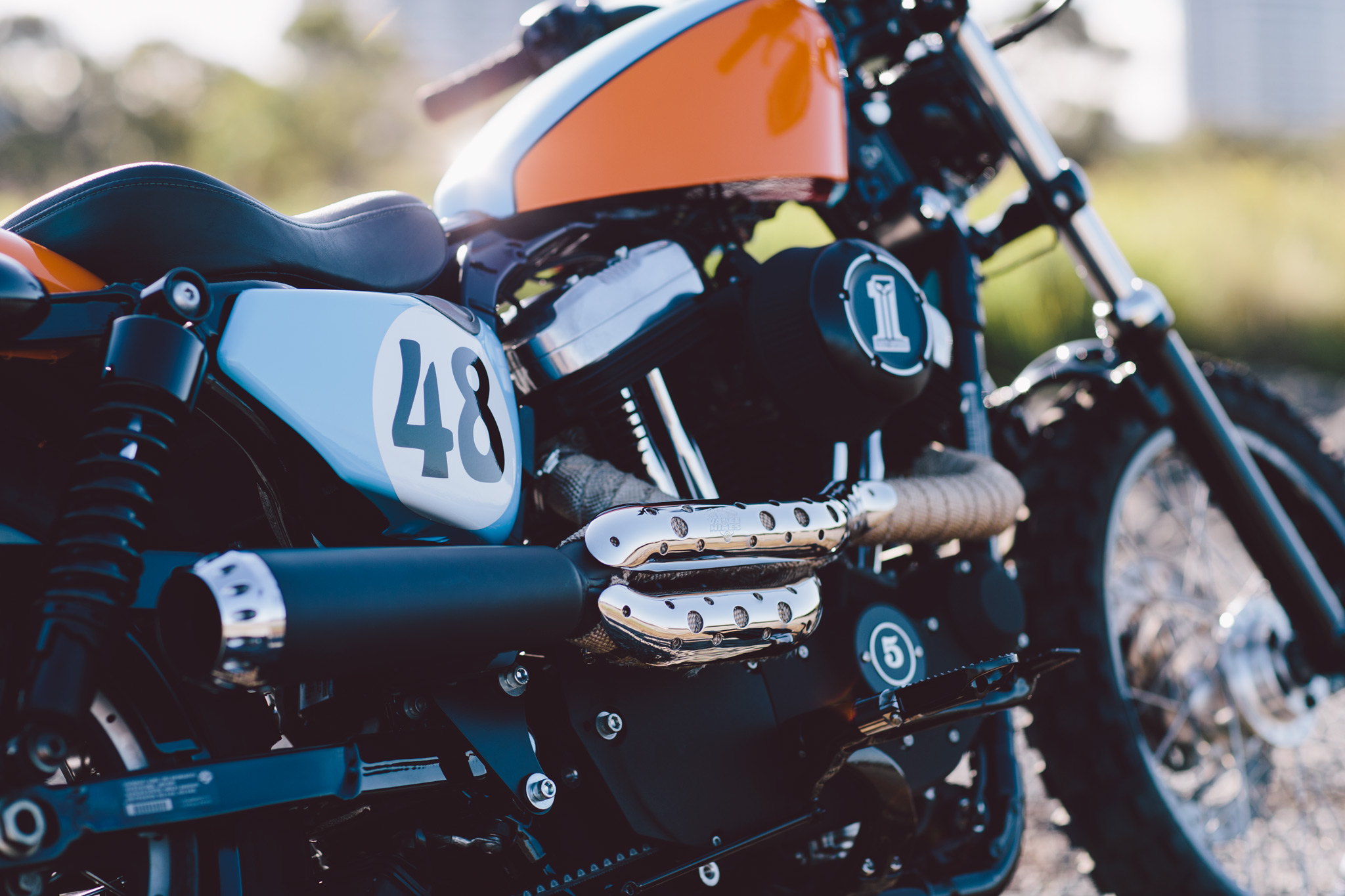 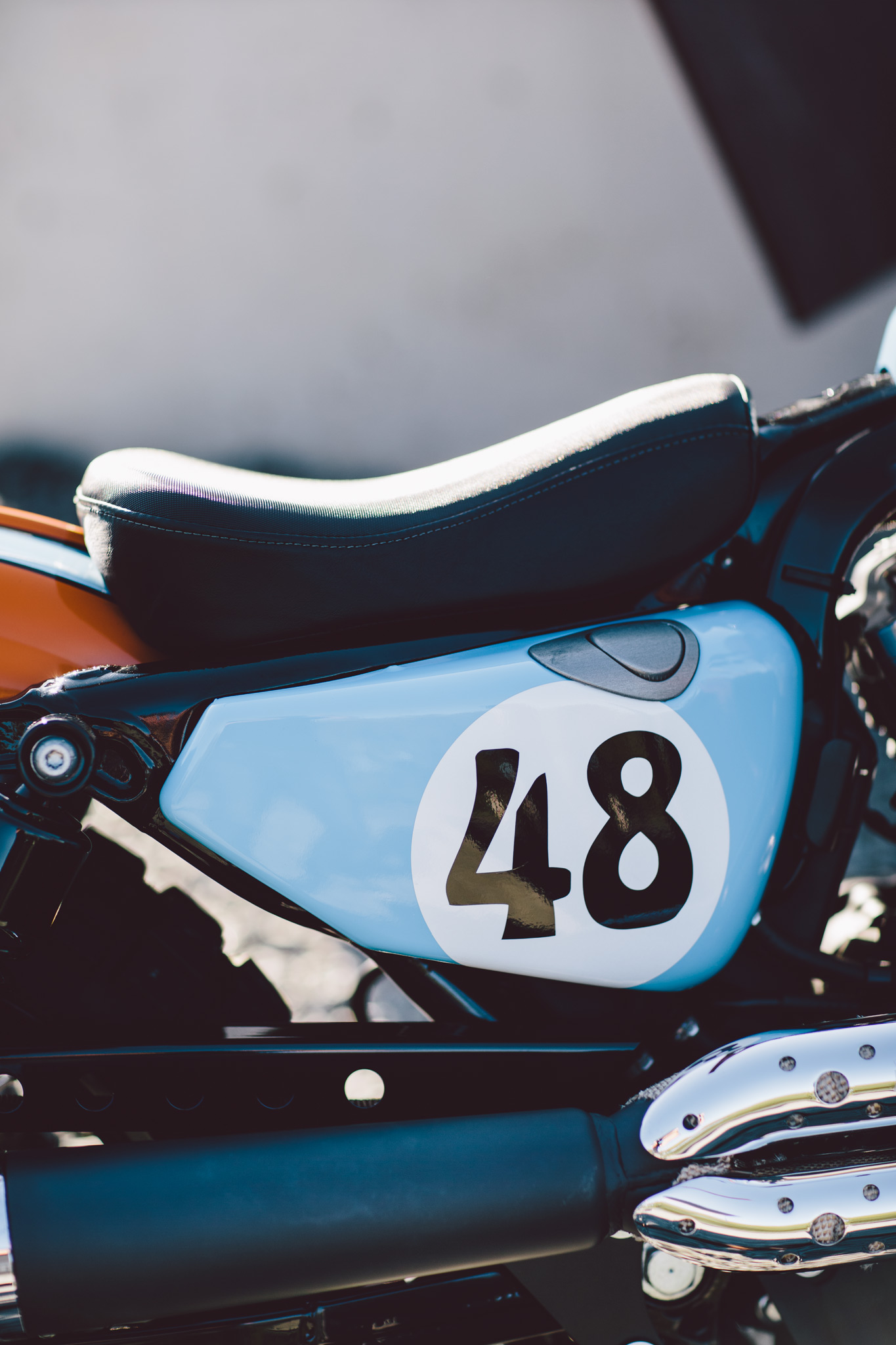 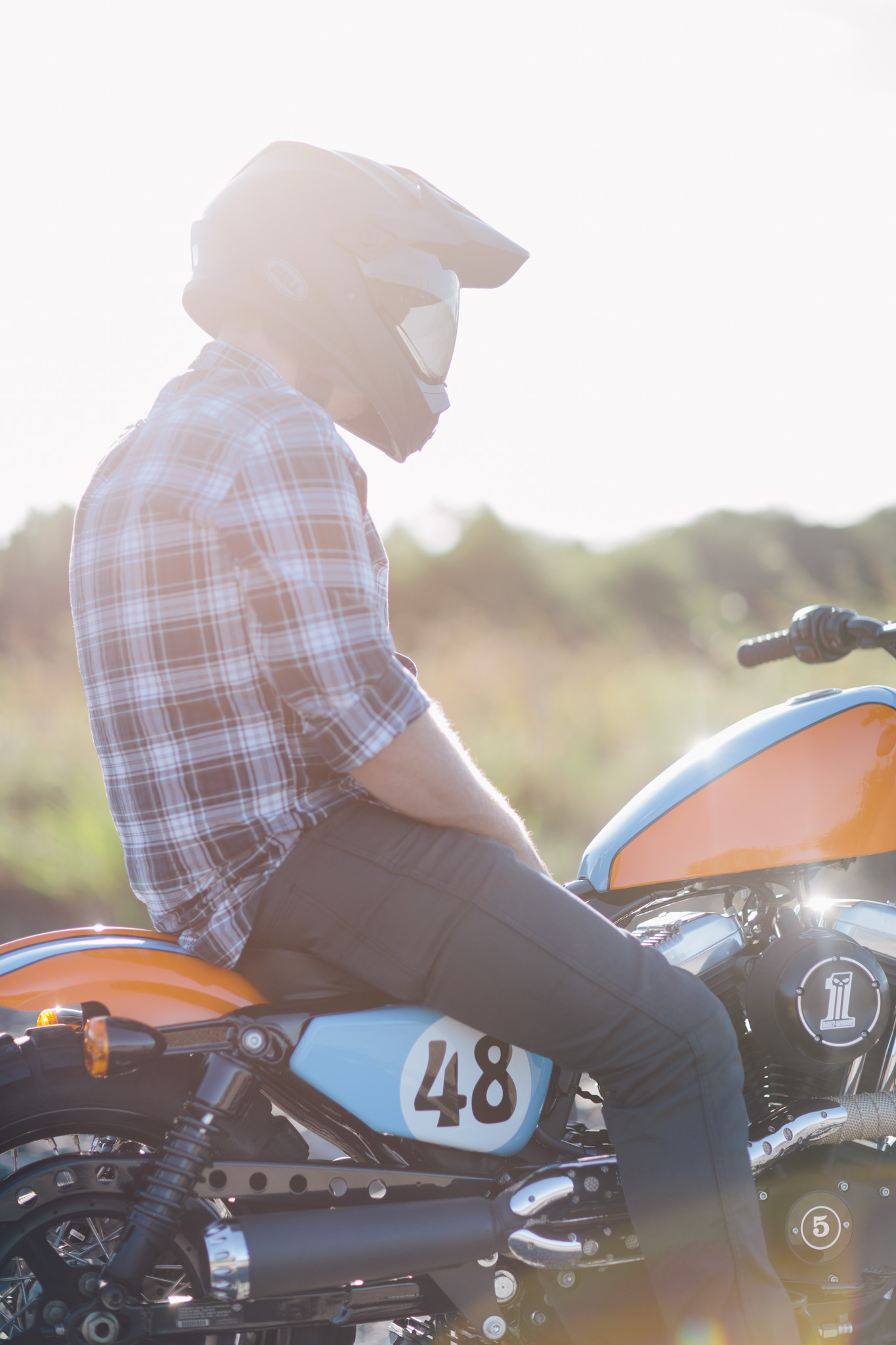 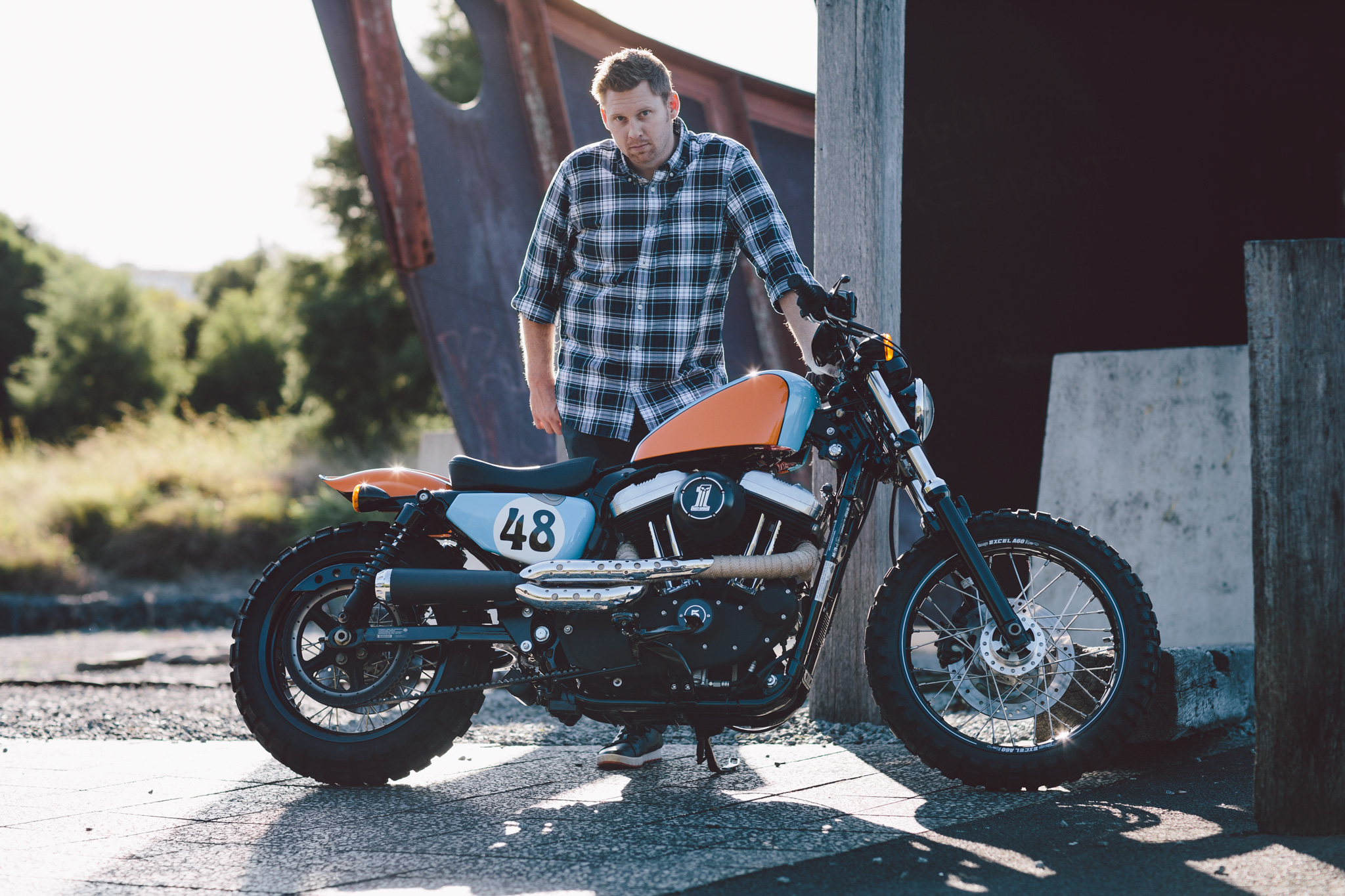