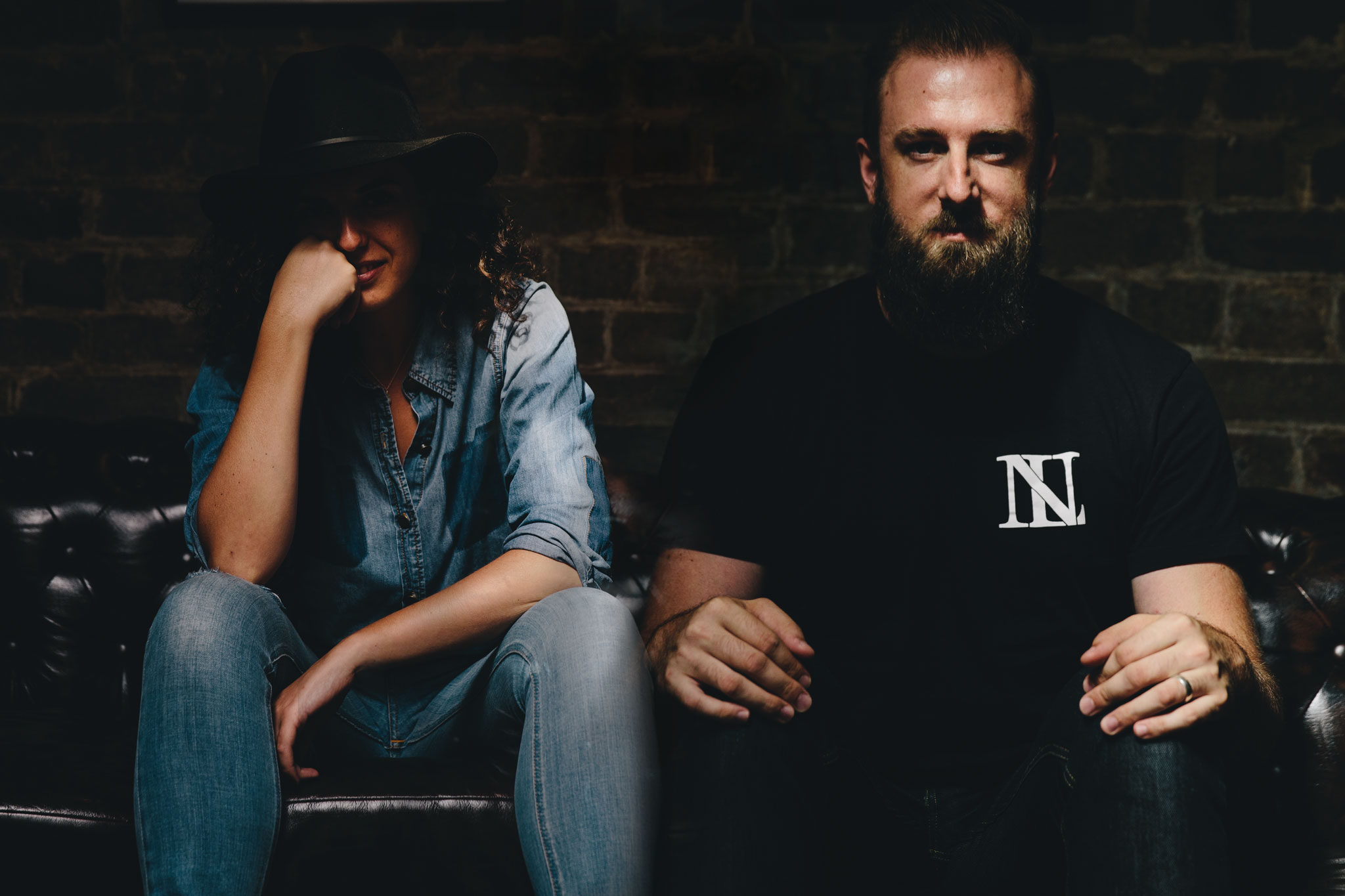 It’s been a long road, with lots of bends over many years for both Adrian and Heleana as they entered and expanded upon the custom motorcycle world for Sydney. To call them a couple wouldn’t seem quite right, more a team that have strived in created Sydney’s first self service motorcycle workshop and cafe – Rising Sun Workshop. 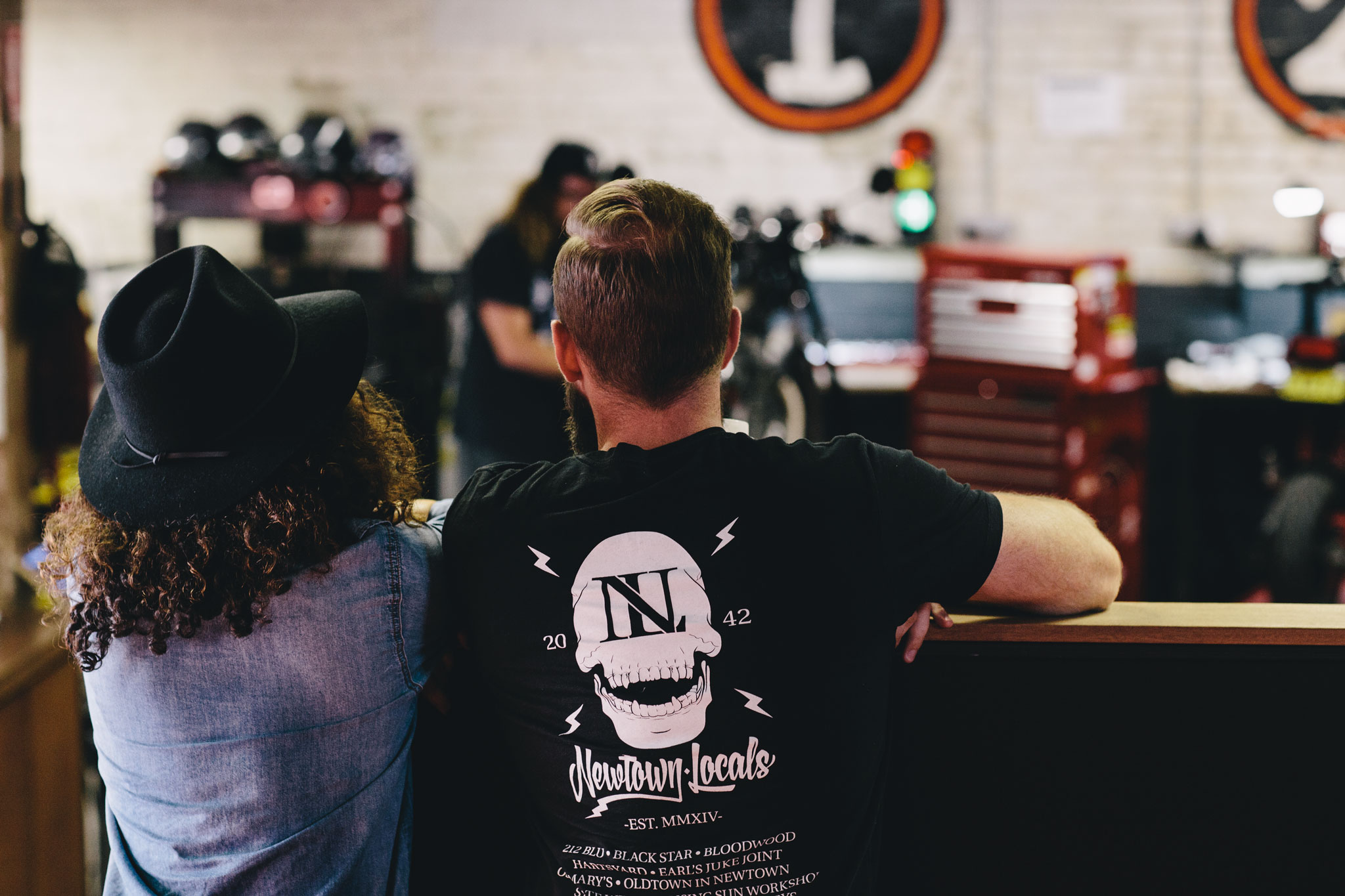 Motorcycling would enter both Adrian and Heleana’s lives very differently, and at very different times. Despite growing up on a farm, Adrian wasn’t allowed anywhere near motorcycles after his Mother had an accident whilst riding. This resulted in a strict no motorcycle policy on the farm, and so Adrian instead spent his time working on cars in the shed. “If the car didn’t run, I had a 1.5km walk to the bus stop, so I made sure the car always ran.” Learning everything he could from his Dad, Uncles and mates, plenty of work was done on machines in the shed. Fast-forward some years, Adrian was now liberated from the no-bike policy as he lived on Sydney’s Northern Beaches, and sure enough he’d pick himself up a 1986 Yamaha SR400. “It was the third best day of my life riding that bike from Ryde where I picked it up, back to my home in Dee Why. I had a smile from ear to ear, and it’s probably the longest non-stop smile I have ever had.” 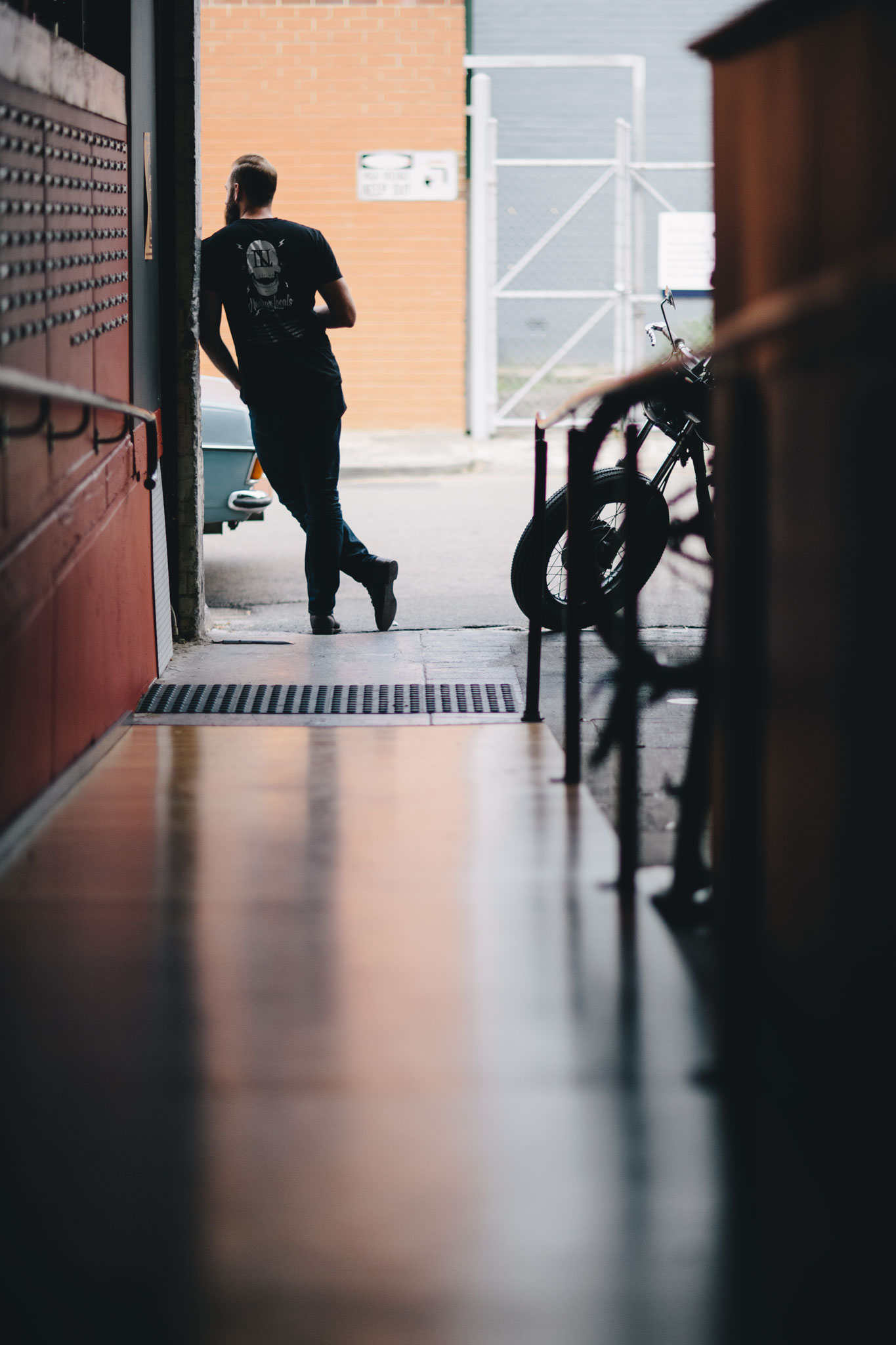 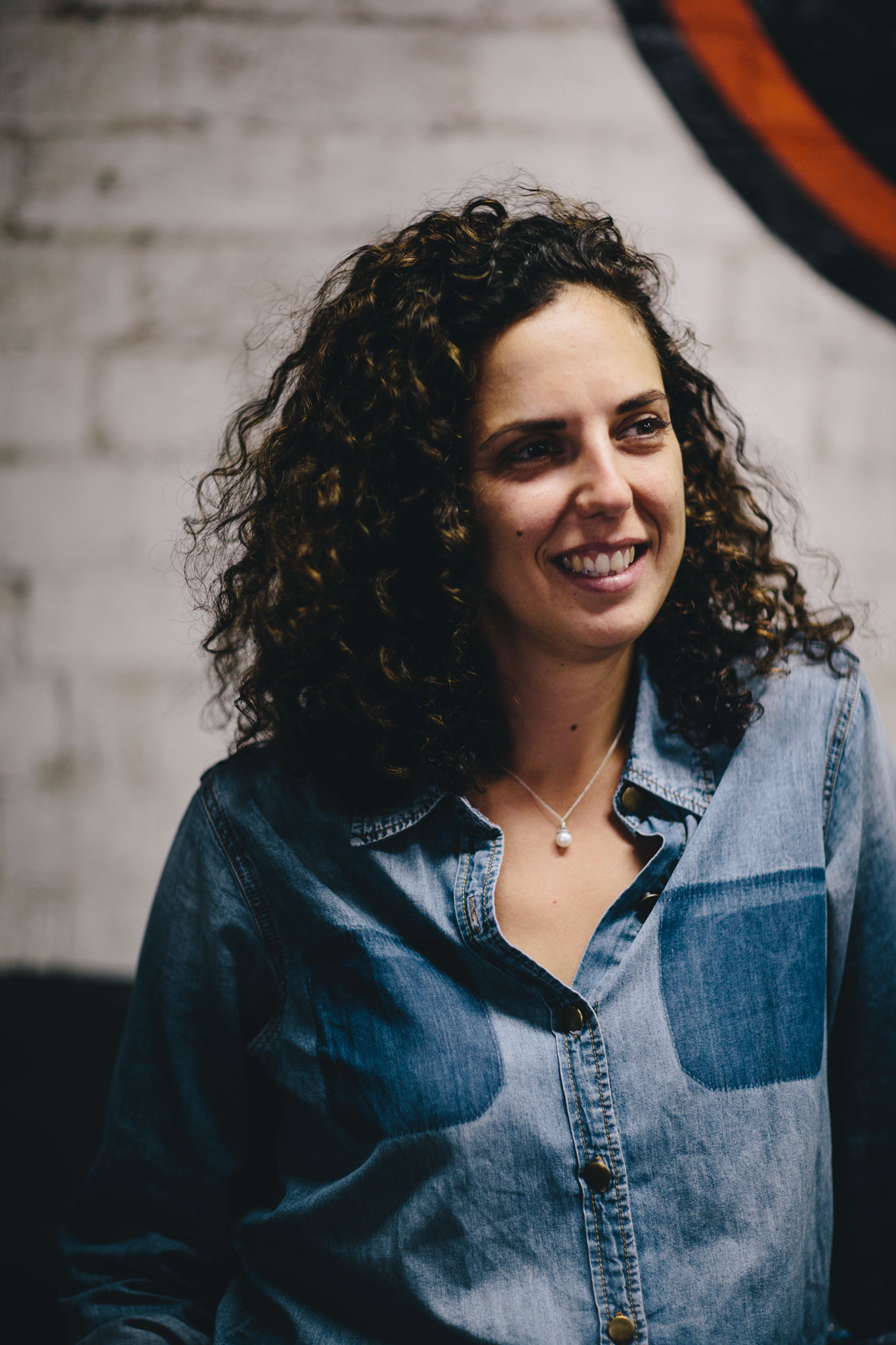 Heleana’s introduction to 2-wheels was somewhat the opposite, as she grew up in suburban Sydney, daughter to a Greek immigrant from a small village in central Greece. “Our backyard was a playground where we were only limited by our imaginations. Cars were a large part of the communal part of our upbringing, both mum and dad worked on cars both out of poverty (Dad bolted aircraft seats to the back of a bright blue Nissan ER van in the 1980’s for the family car) and passion. I was about 11 when Dad brought home a Honda CT90, showed me how to ride it, and I was off! Every day after school, still in my school uniform, no helmet and barefoot, I’d walk through the house dump my stuff, grab the key and run out to the Honda doing laps of the suburb making a game out of how much faster I can corner. Motorcycles became my way to get into that communal village more than I could with cars (11 is a little young to be trying burn outs in a valiant).” 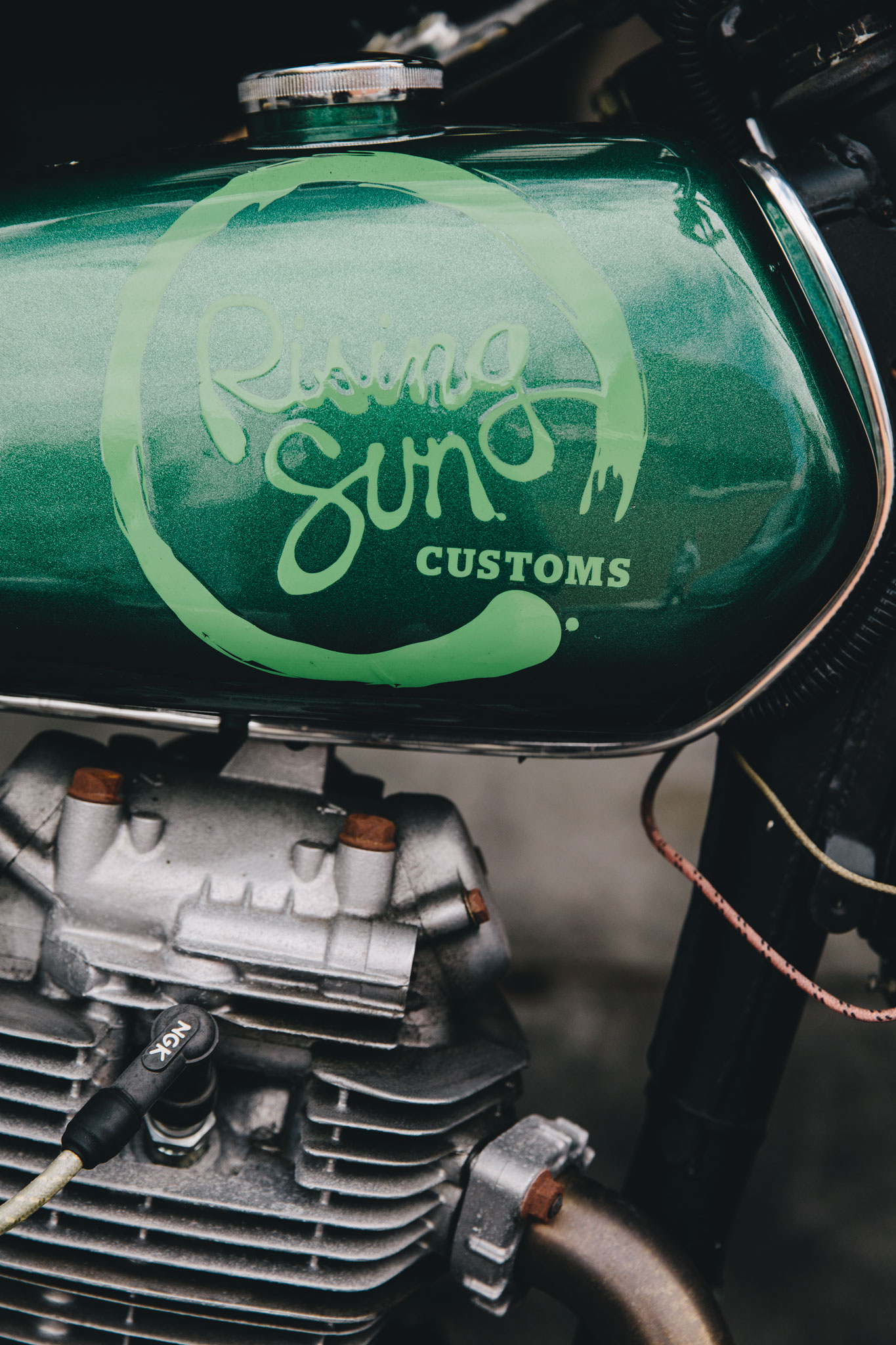 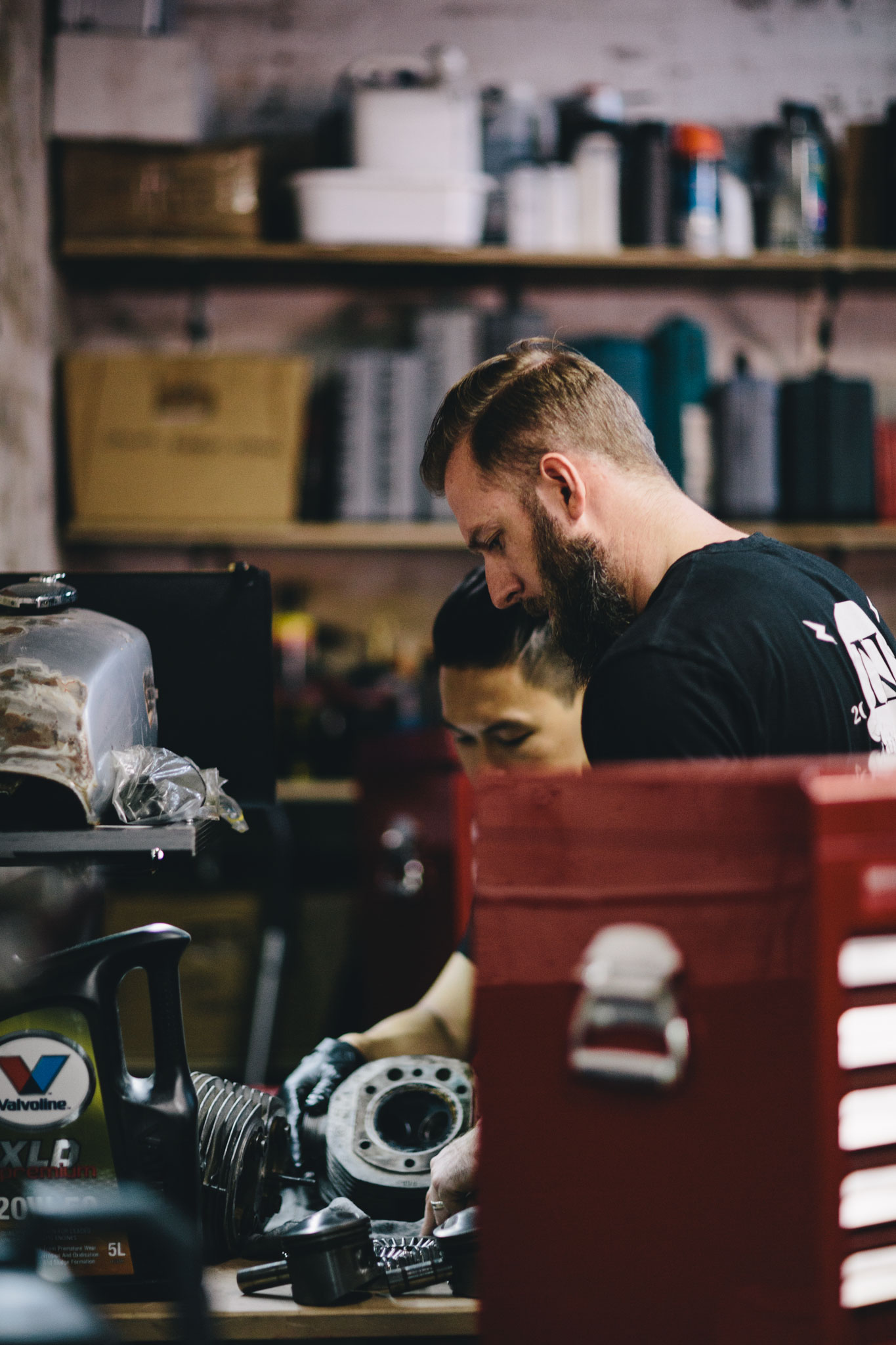 So here we had a farm boy with no bikes, and the curly-haired girl from the suburbs who was doing barefoot laps around the neighbourhood. It would be on the first day of University in 2002 that they would finally meet, some may call it fate, others would just point out that two people generally seem to meet when enrolled in the same University. Regardless, with Heleana studying a Masters of Architecure and Adrian his Industrial Design Degree the two became friends. (or Friend-zoned as Adrian put it) “Adrian was all bright-eyed and bushy-tailed having just moved to the big-smoke from the country. Everything was exotic, interesting and overwhelming for him… including me! I loved this guy instantly, a country gentleman who had this gentle resilience, a lot of patience and positive outlook on life. Incredibly, almost 12 years later and a lot more life, loss and joy lived, he still thinks I’m awesome and I adore him.” 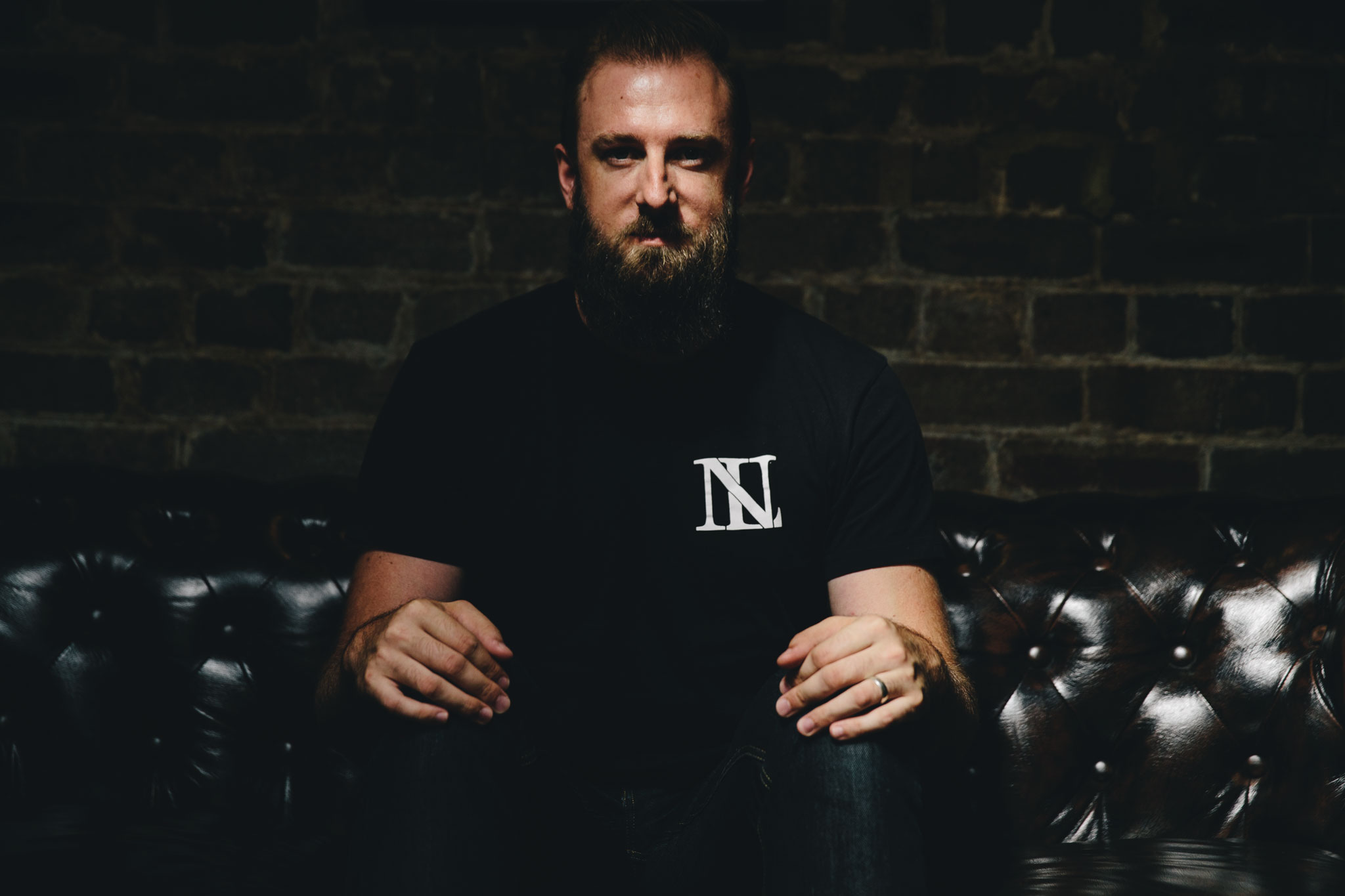 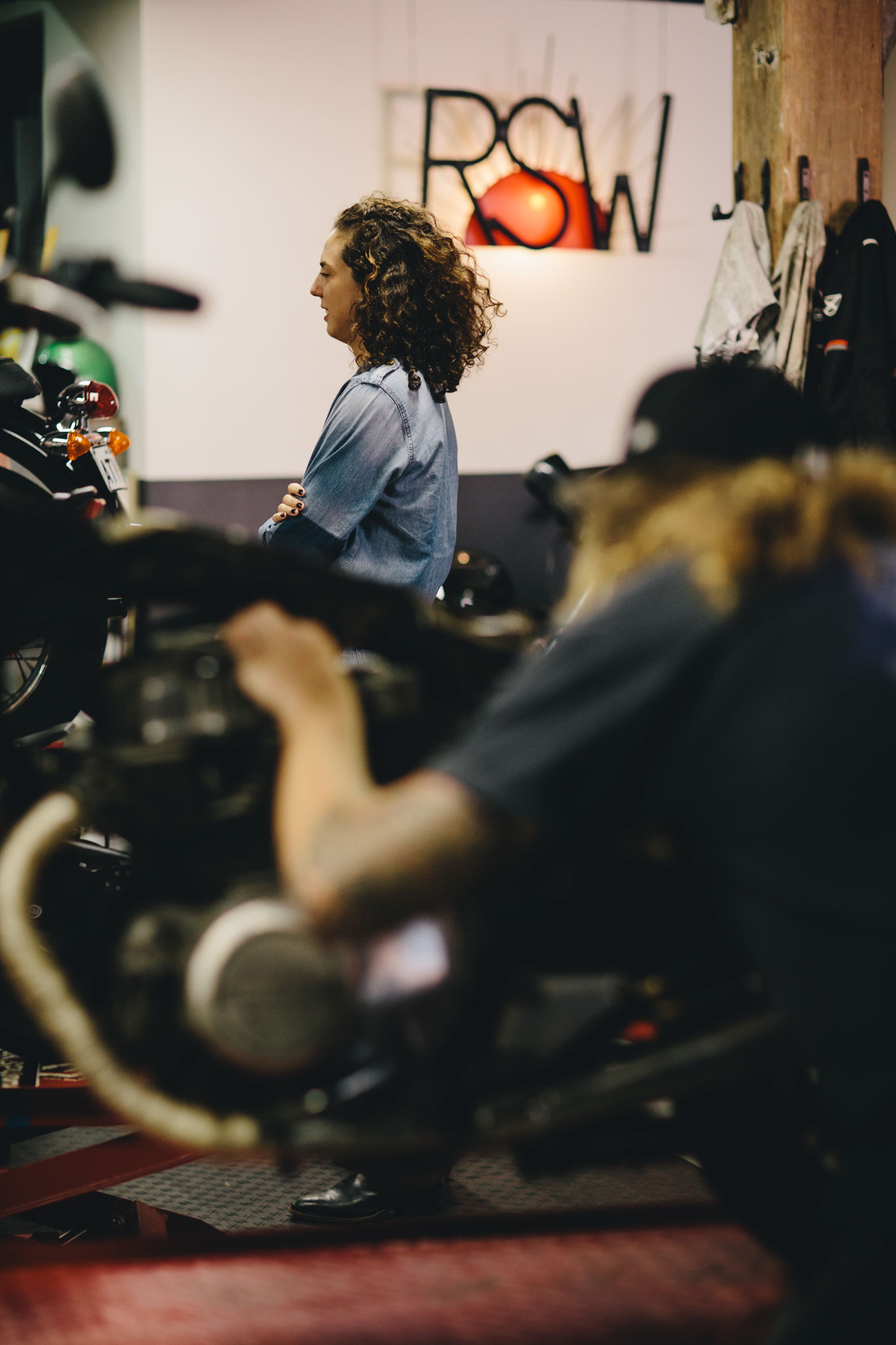 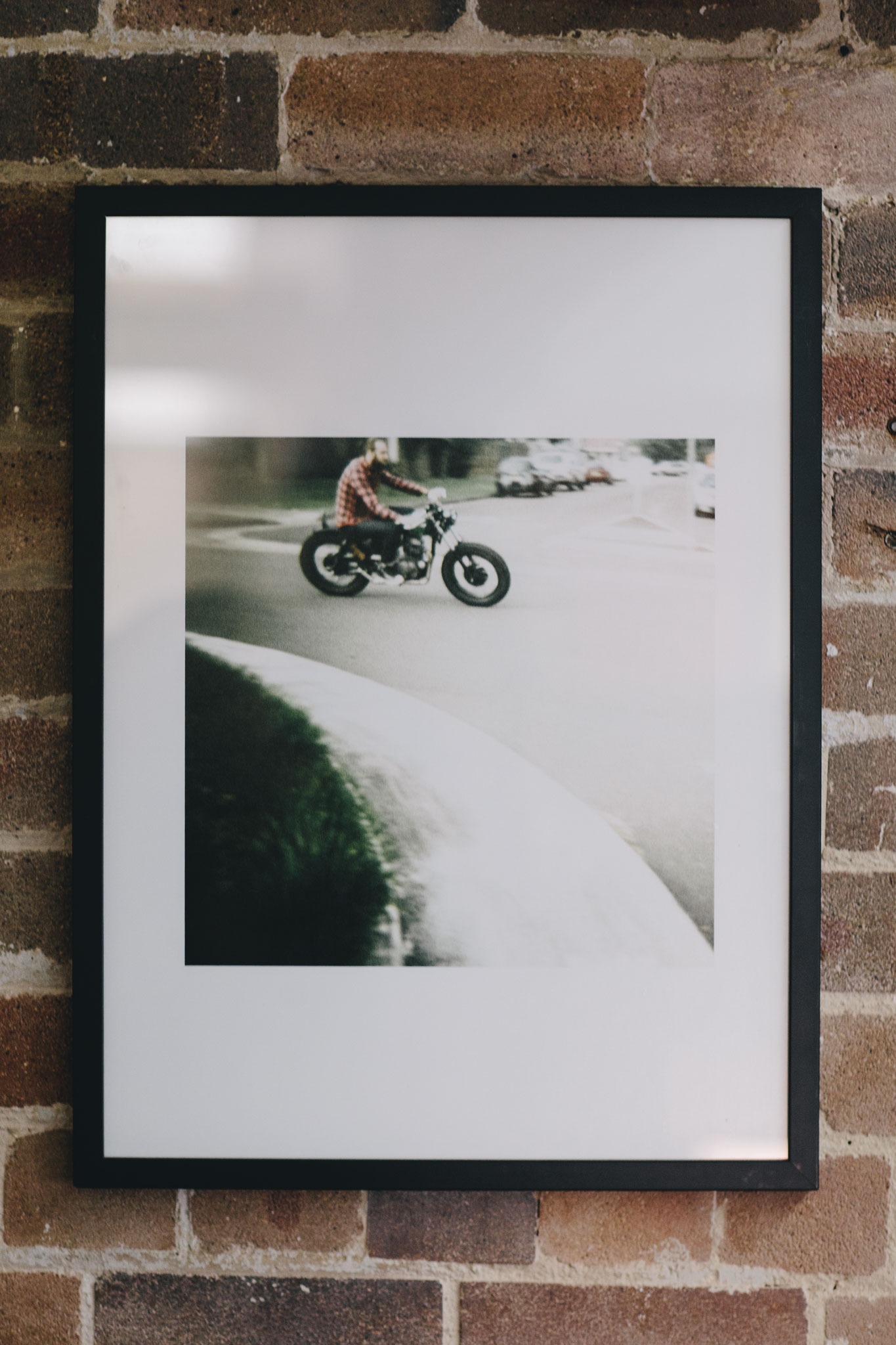 The lovechild (for lack of a better term) of all these years together and a common passion for 2-wheels resulted in Rising Sun Workshop, although not overnight. While living together with Adrian’s newly acquired Yamaha SR400 in 2010, the pair instantly wanted to start wrenching on it. “I was a massive Deus fan boy and wanted in on the café racer scene. Both Heleana and I missed wrenching and tinkering like we used to growing up, we’d traded working on machines to the odd screwdriver or allan keys for various pieces of Ikea furniture. 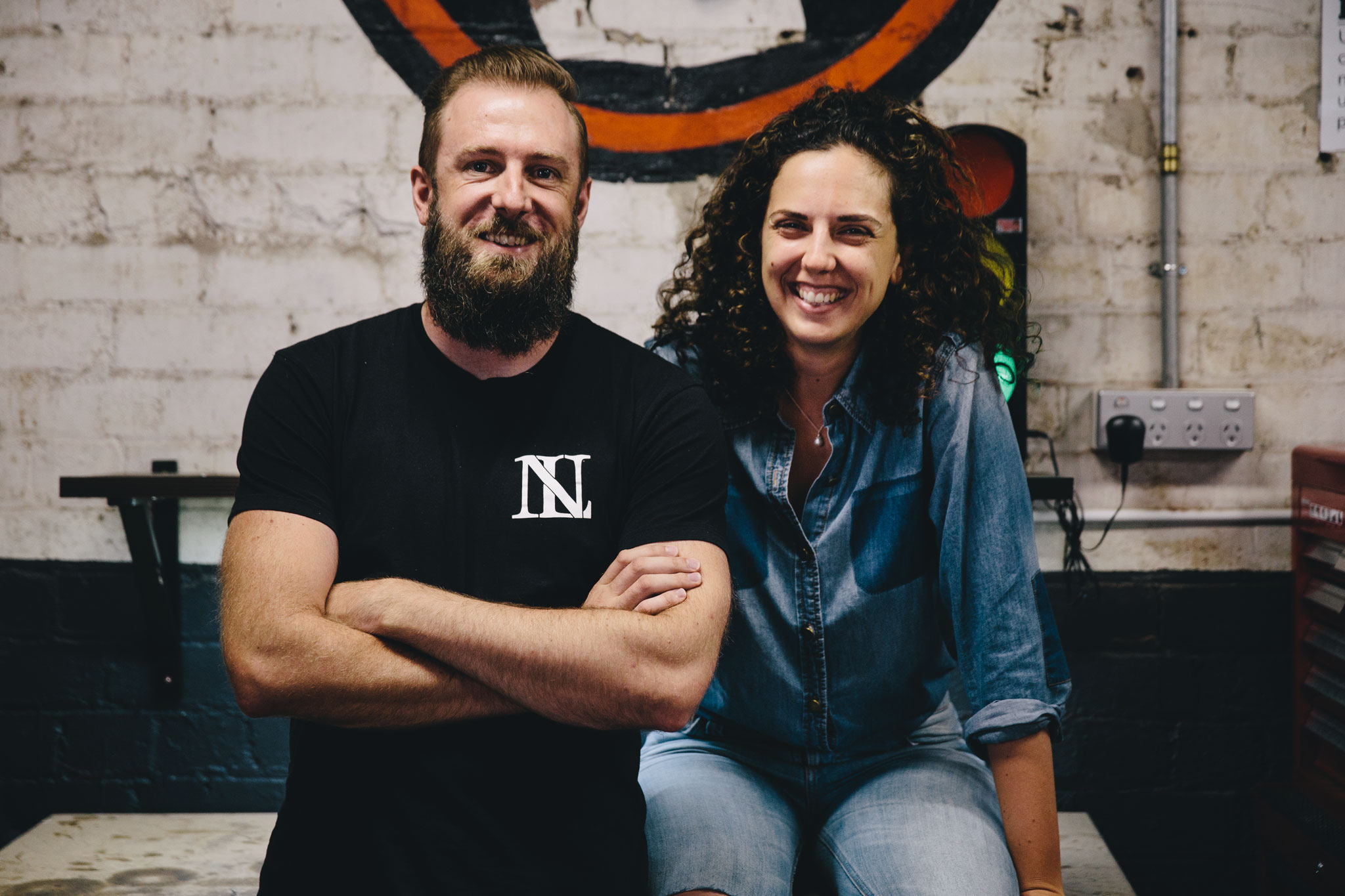 “That’s when I saw a Pipeburn article on MotoMethod in Vancouver and a video about how they turned their mechanic workshop into a space that welcomed their customers, gave them overalls and started teaching and letting them wrench on their own bikes. The bit that got me was that at the same time each day, they sat down at a make shift table and ate lunch together. It seemed real communal. By now I was truly missing my parents shed and wishing for a space I could use with tools and other people and this hatched the idea for RSW. The cafe side was just as important as the workshop for bringing people together, creating an atmosphere of somewhere like minded people could hang out and share ideas and tell stories, as well as make the workshop work financially, RSW is equally both the workshop and the cafe, one would not exist without the other.” 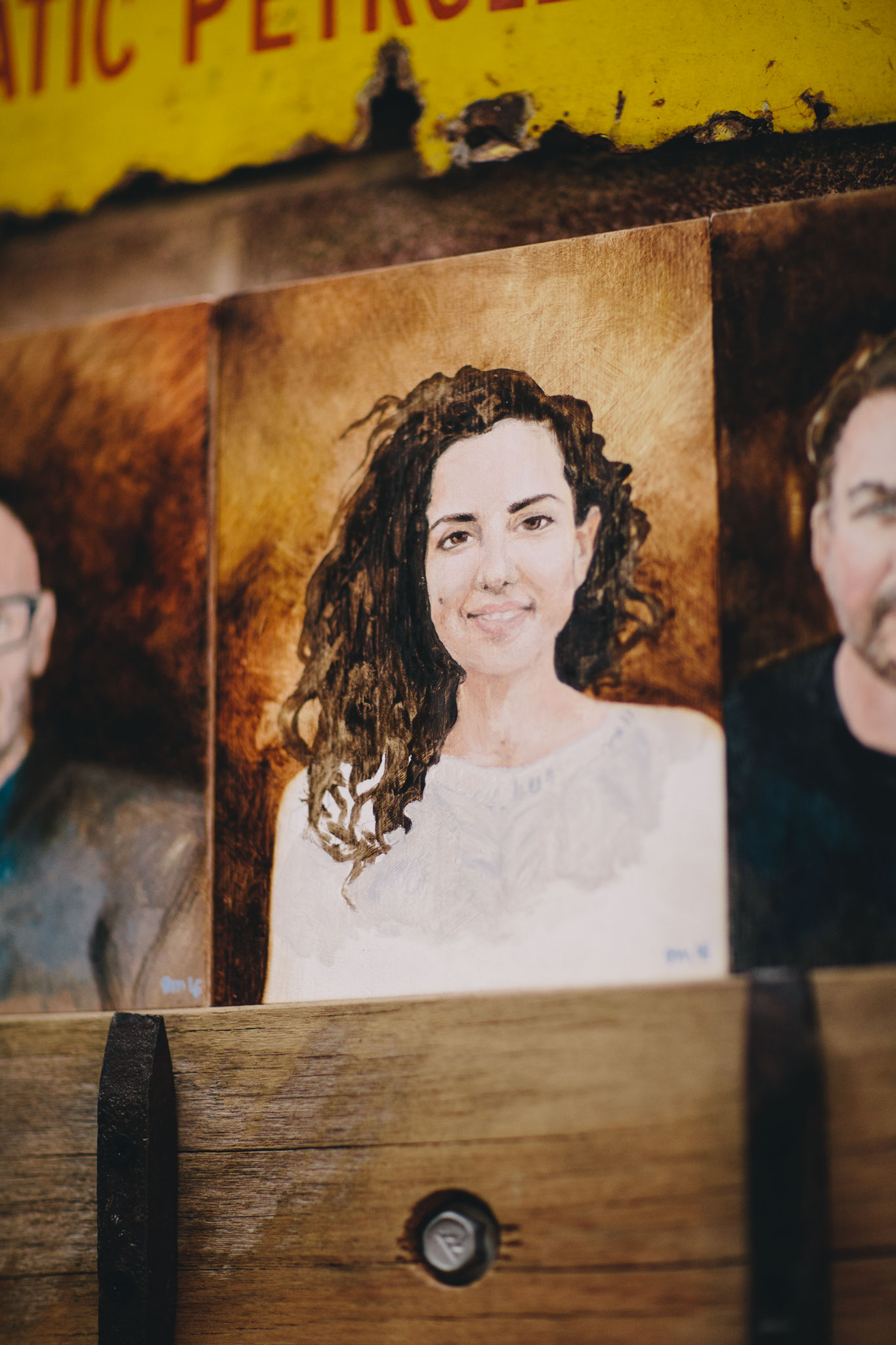 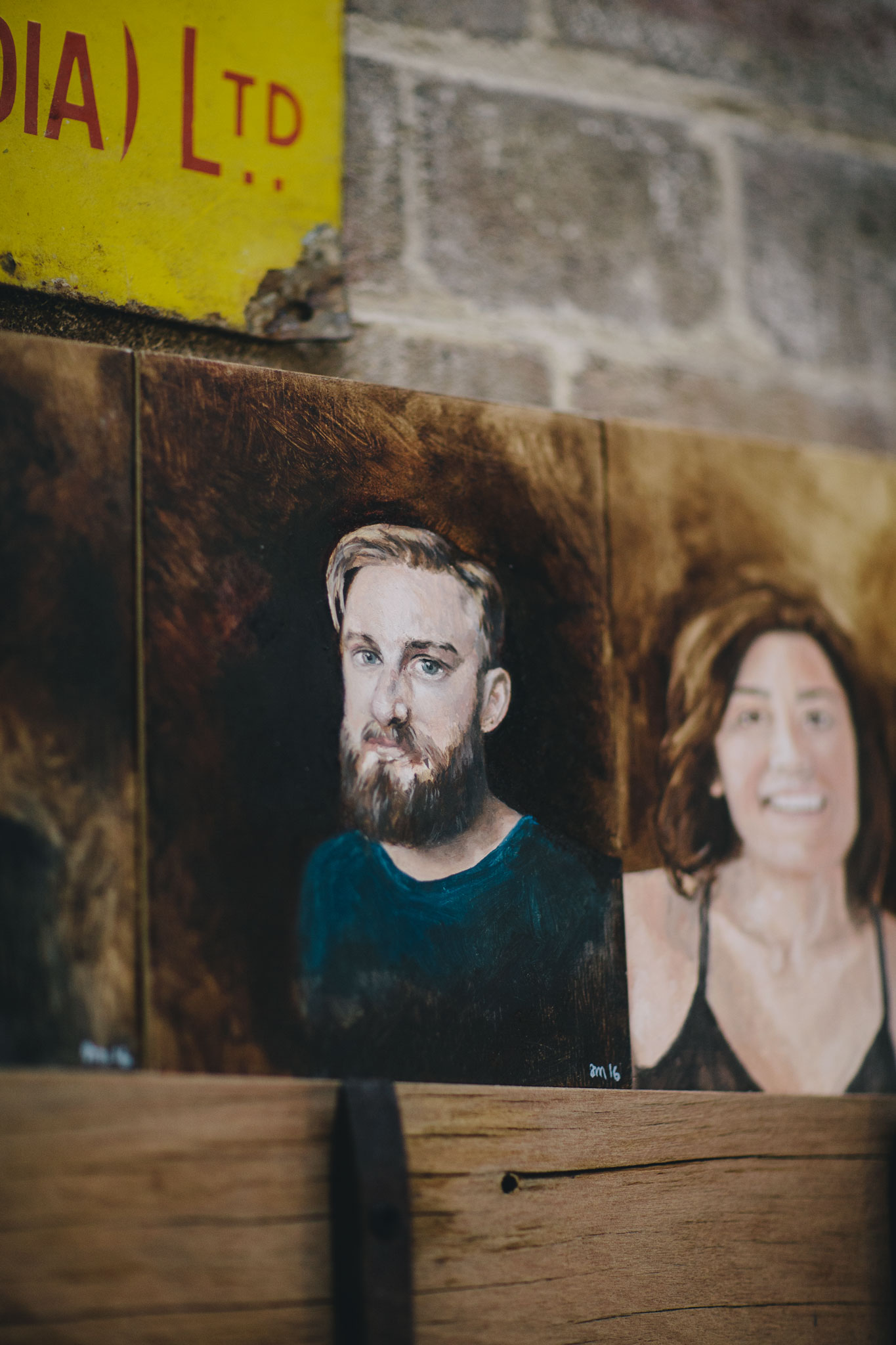 It would be between 2011 and 2013 that they would try get this idea up and running, but financially couldn’t make it work. “We dared not tell anyone, and kept the workshop as an idea close to our chest in fear that someone else would beat us to it. And so someone did. I was on the train when I saw that the Kustom Kommune crowd funding had been launched. My stomach fell to the floor and simultaneously was devastated as someone else was about to make our idea a reality, but I also knew this is what I wanted more than anything else and was willing to do or try what ever it took to make it happen. I almost instantly called Jimmy from KK and told him what RSW was about, how long we had been working on it and that crowdfunding might help us get off the ground as well, Jimmy supported us thankfully and encouraged us to get a campaign up and running as well. We did, and 3 months later we exceeded our target raising $40,000. June 2013 we finished our crowd funding and June 2016 we opened RSW permanently. The 3 years in between involved 4x Development Applications, an illegal pop up space, 4x Throttle Rolls, many fines, lots of consultants, arguments, sleepless nights, 3 funerals, many new friends, the beginnings of a great DIY community, heaps more laughs and now 6 months open under our belt.” – Adrian 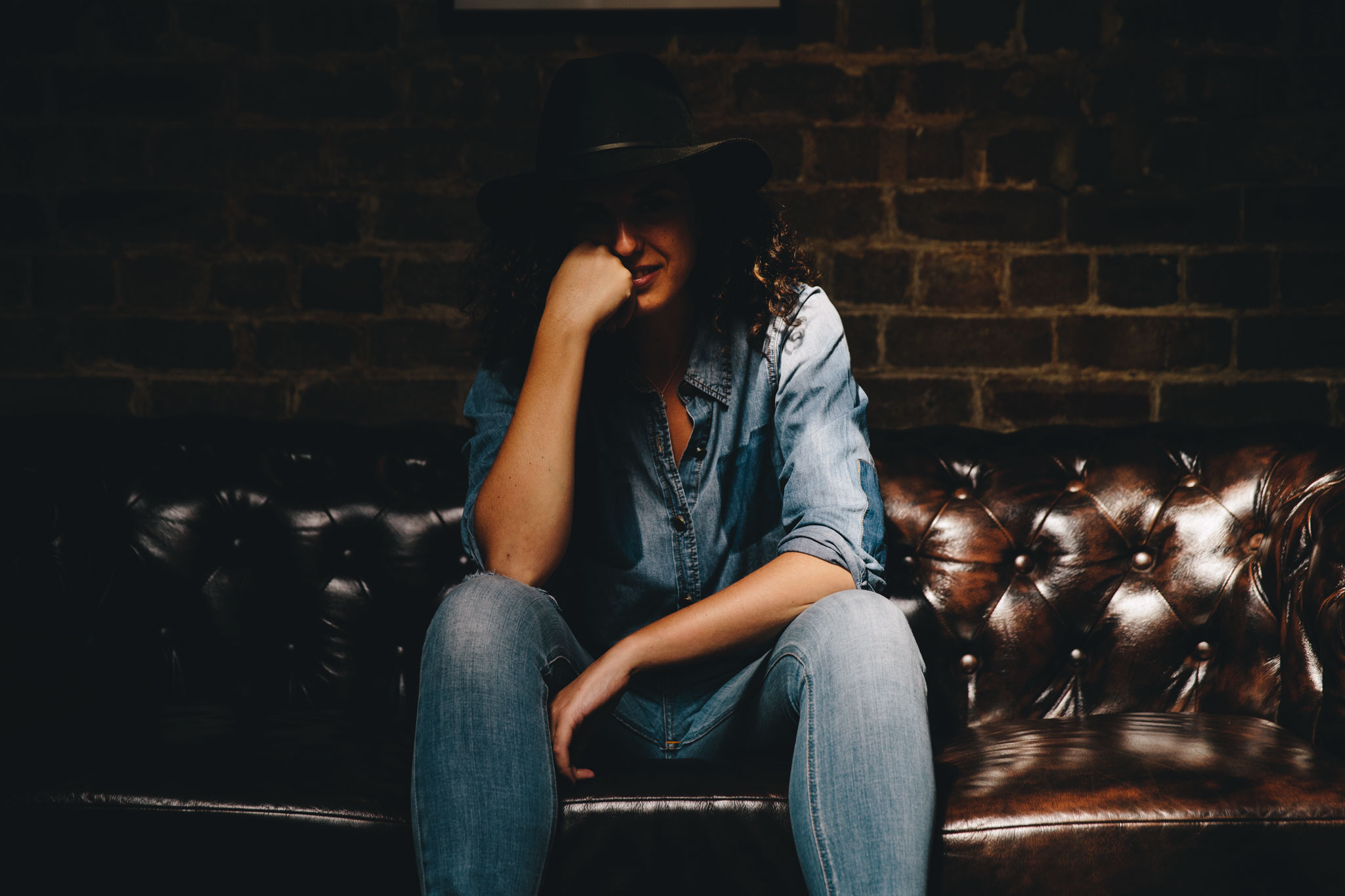 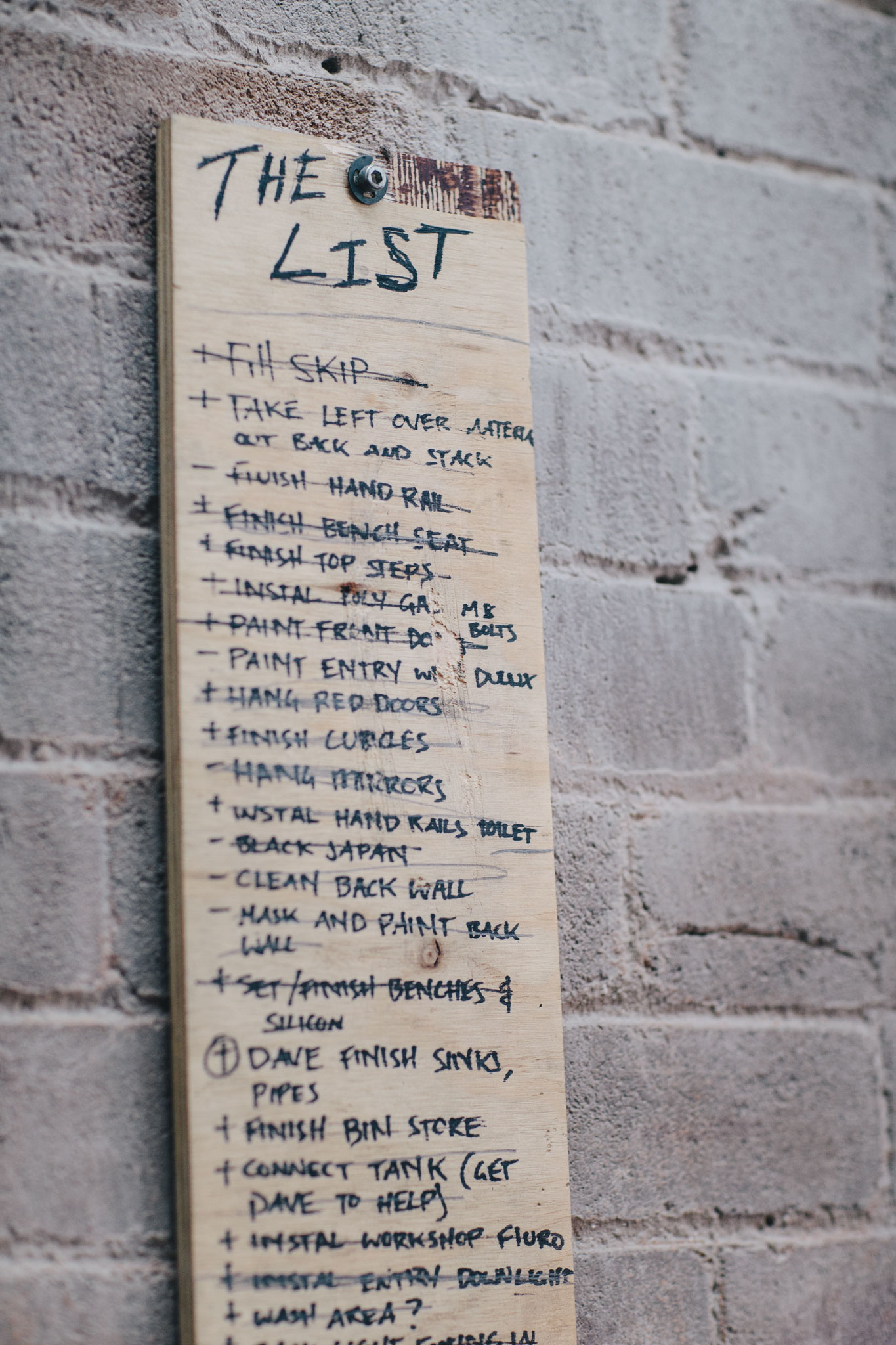 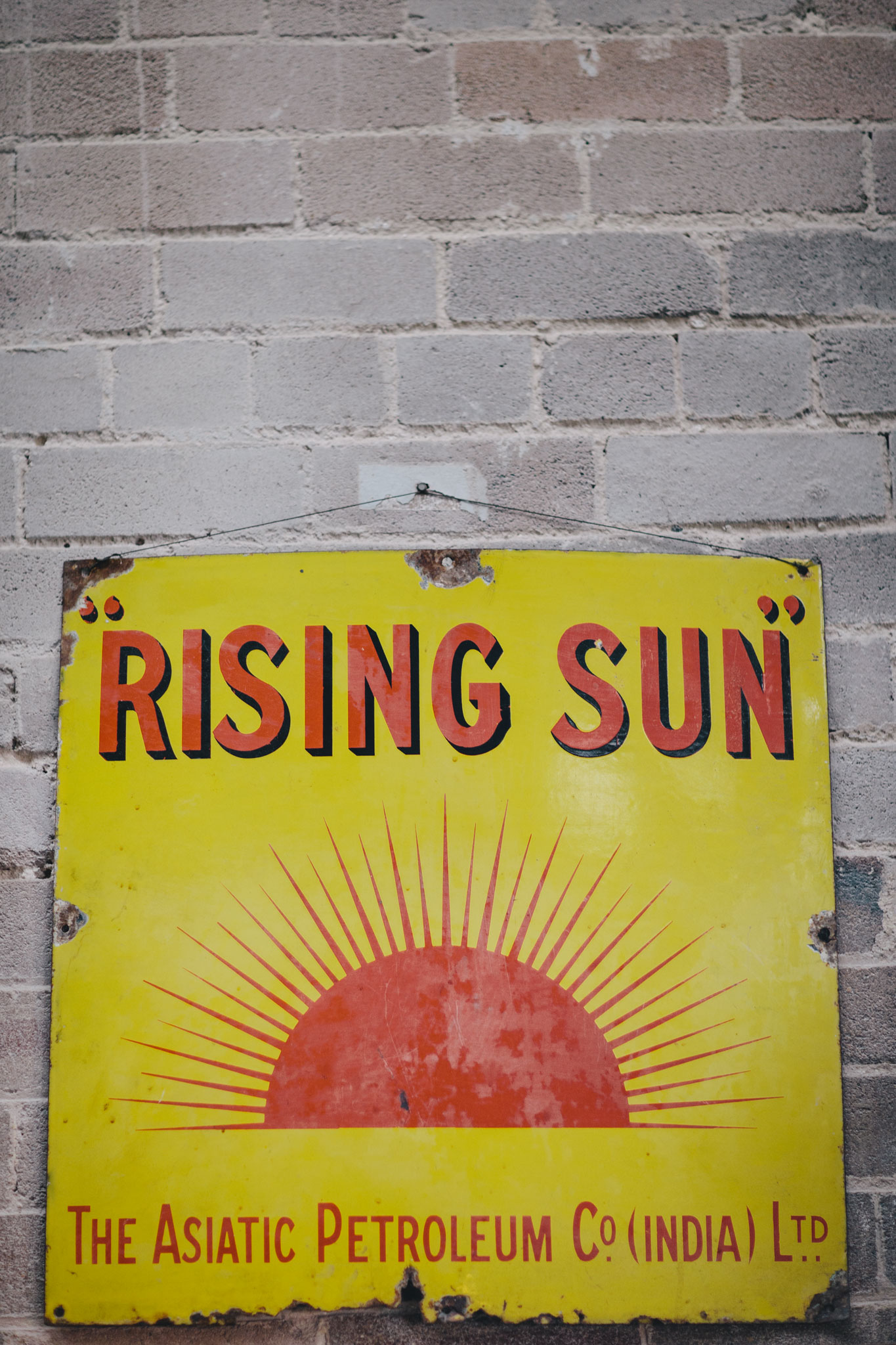 Going through this massive journey with your partner is something that is as rewarding as it is challenging. “We are definitely different people now compared to who we were just before we started on the RSW journey. We’re better, have harder edges and know who we are individually and together. The path to opening our doors has been extraordinary. Along that road we’ve been pushed and pulled in all sorts of directions… it’s treacherous and takes a fortitude to survive it without compromising on who we are and what RSW should be. We held ourselves really accountant to the community who backed us and I think this served us well, we had to back ourselves all the way. I’m really proud of this place and the extraordinary team who surround Adrian and I. It’s a massive achievement to get RSW open and remain the warm, welcoming, communal place it is.” – Heleana 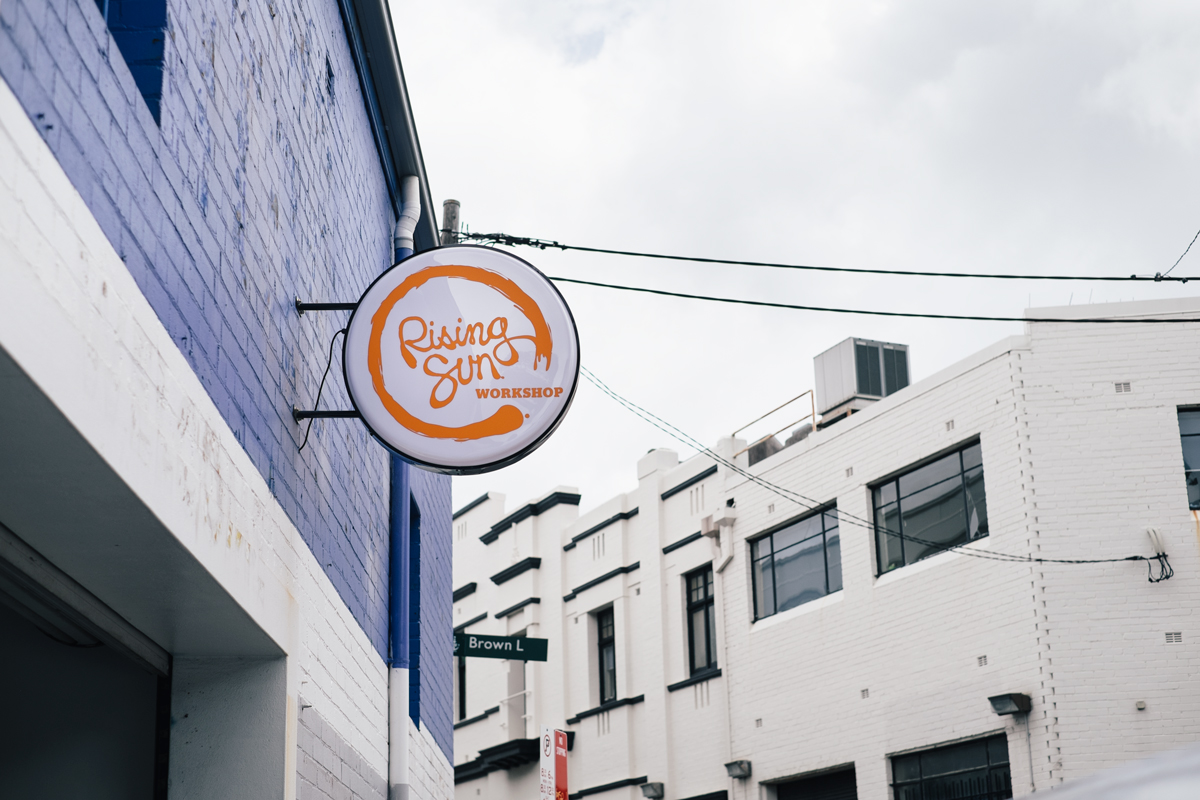 “Being business partners and life partners is equally rewarding and challenging. We have definitely had tough times on this journey but I can honestly say if we weren’t in this together and weren’t married, I don’t think RSW would exist. It has definitely made us stronger as a couple and in the darkest hours when it looked like RSW wouldn’t happen, being together helped me get though the dark times and gave me strength to keep fighting. Also having the combined unwavering support of Heleana and also brutal honesty is the best combination. I always know the feed back is constructive and from a place of support, no other agendas are at play.” Adrian 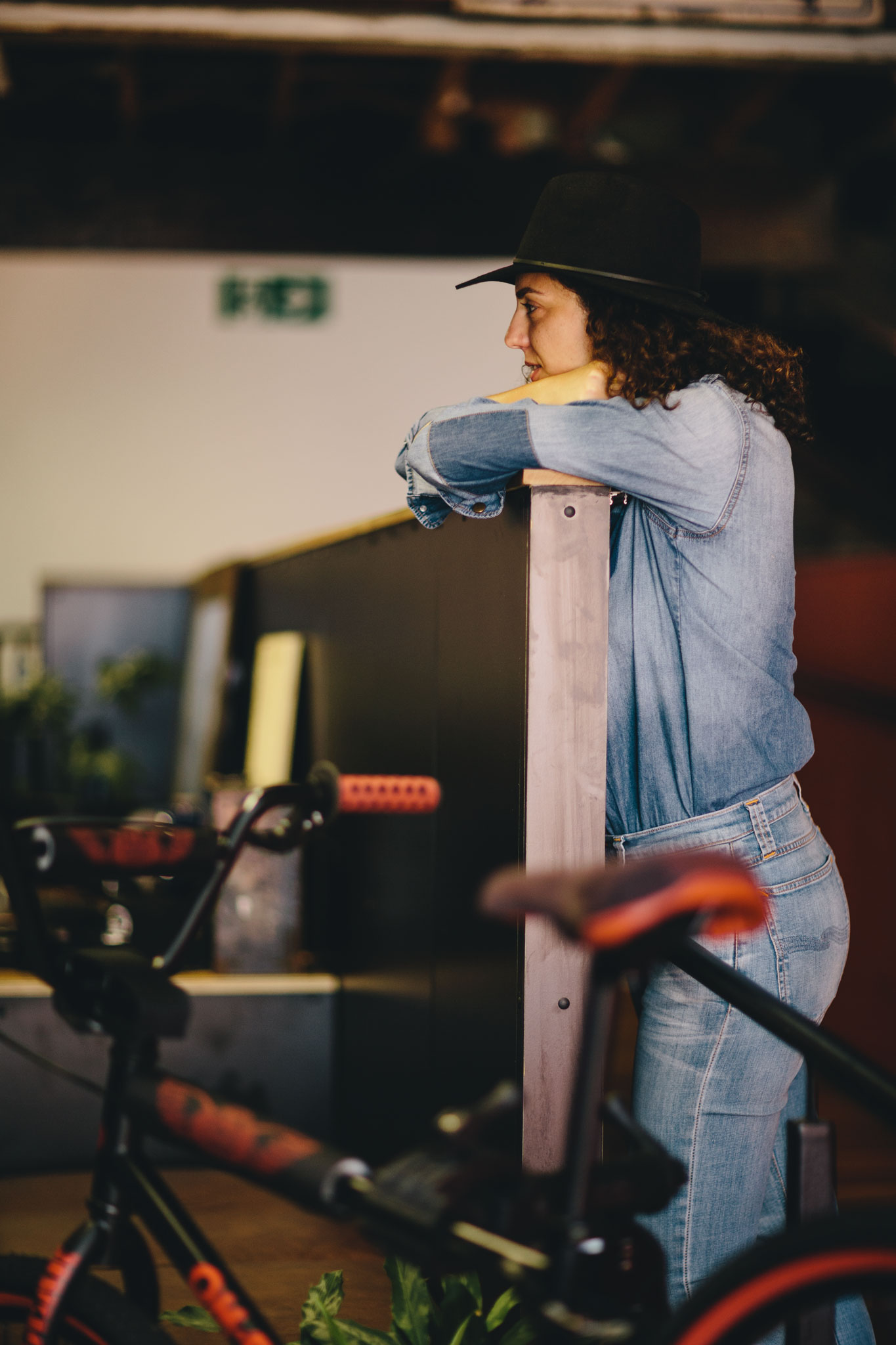 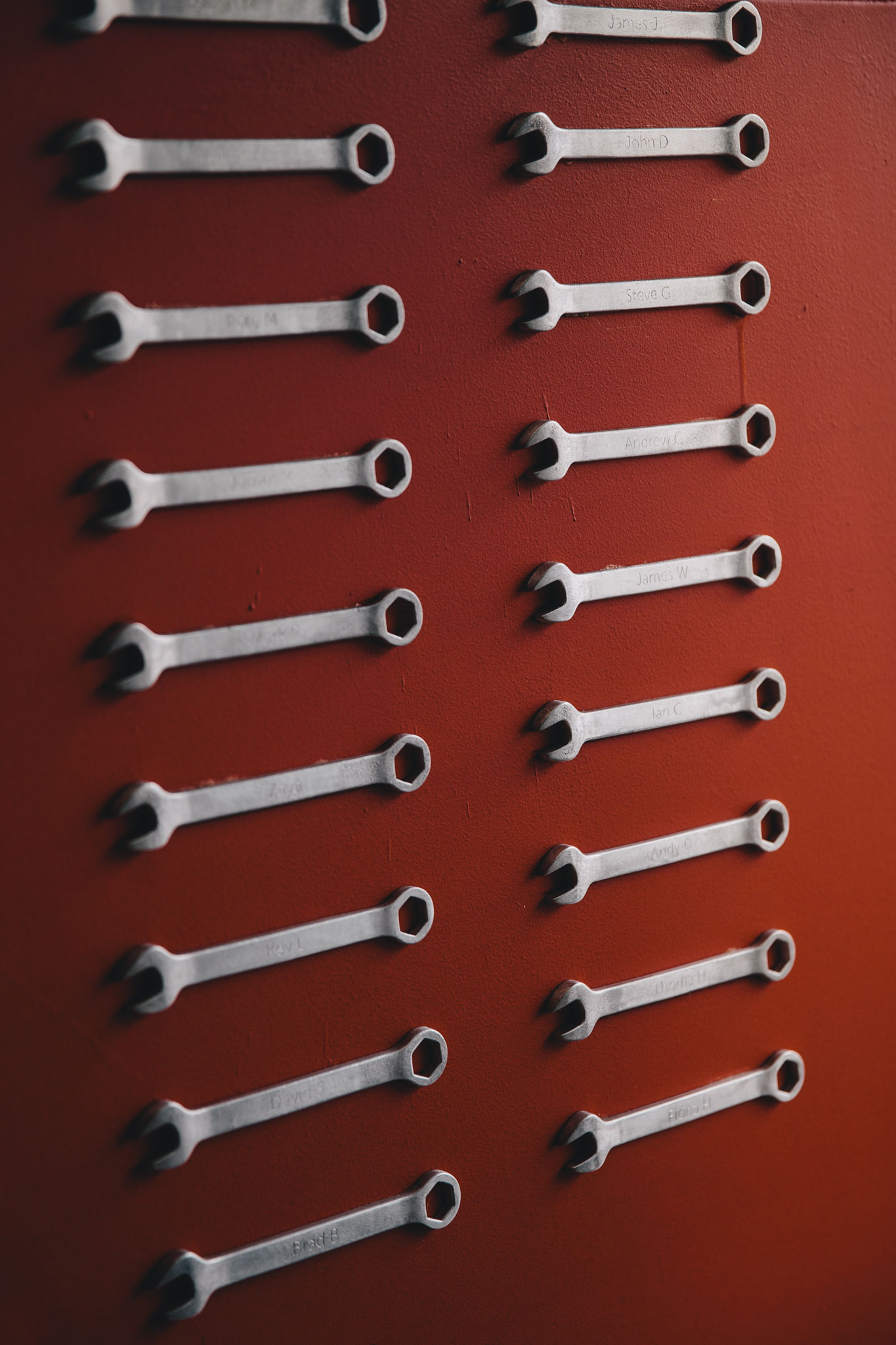 Today, Rising Sun Workshop is a warm, thriving hub of wrenching and good food. The old Mitre 10 building has been transformed into a beacon for those wanting to learn more about working on their ride, while also having the space and tools to do so. A luxury many living in urban areas do not have, with garages and sheds being few and far between. The café pumps out a ton of incredible food, which has received acclaim across the Internet. This space also plays host to unique and bespoke events, providing intimate sessions with acclaimed bike builders, and events for Aussie heros. “There’s been a clear thirst for knowledge exchange, both teachers and students alike are really enjoying the workshops we’ve been running, Brad Coles does an incredible job running the workshop and teaching. We’re looking to expanding our workshop offering to match the evolving knowledge base of our members and will be focusing on engaging more women in wrenching.” – Heleana

For more be sure to head to www.risingsunworkshop.com or check out the space in person. 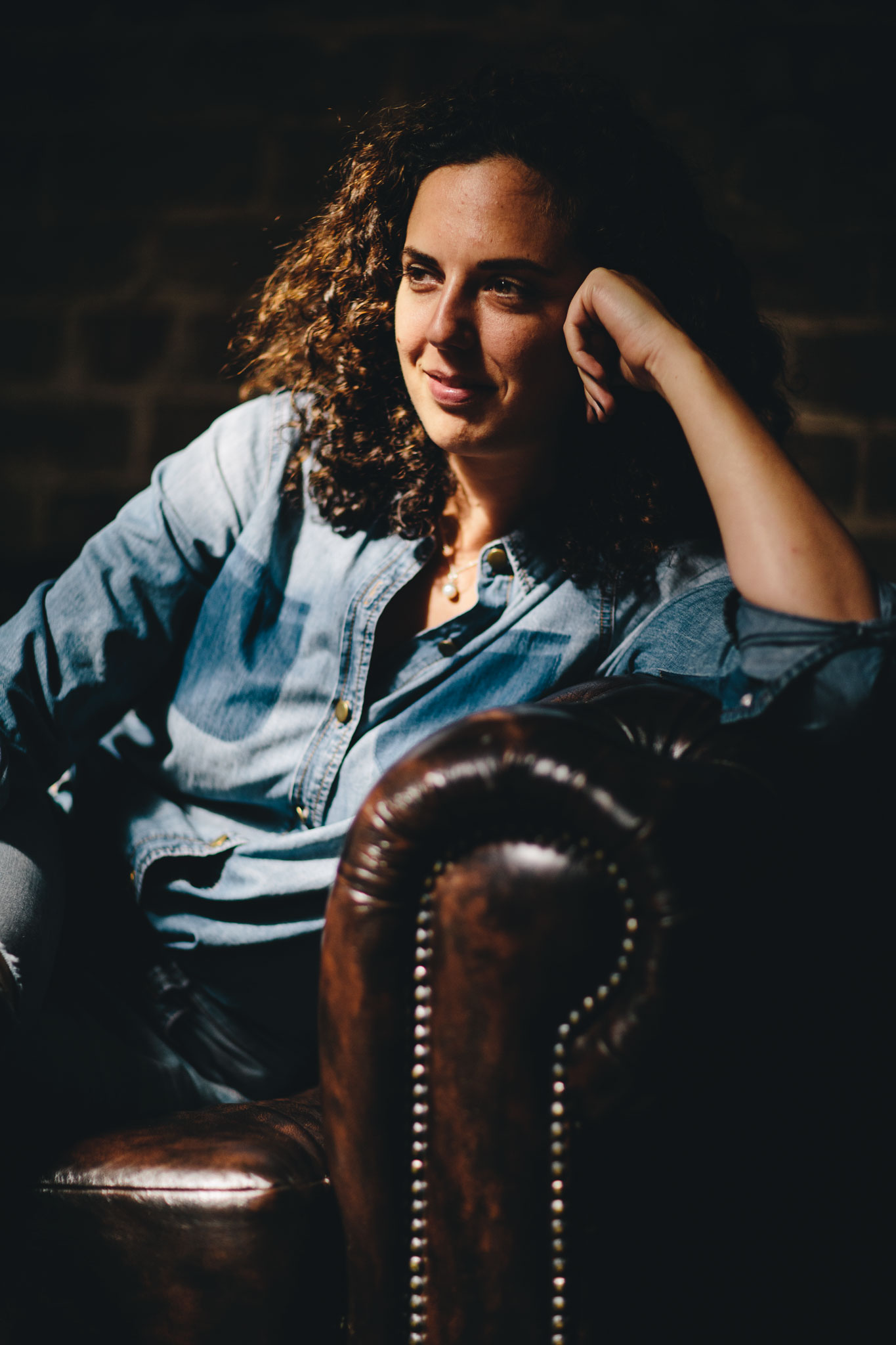 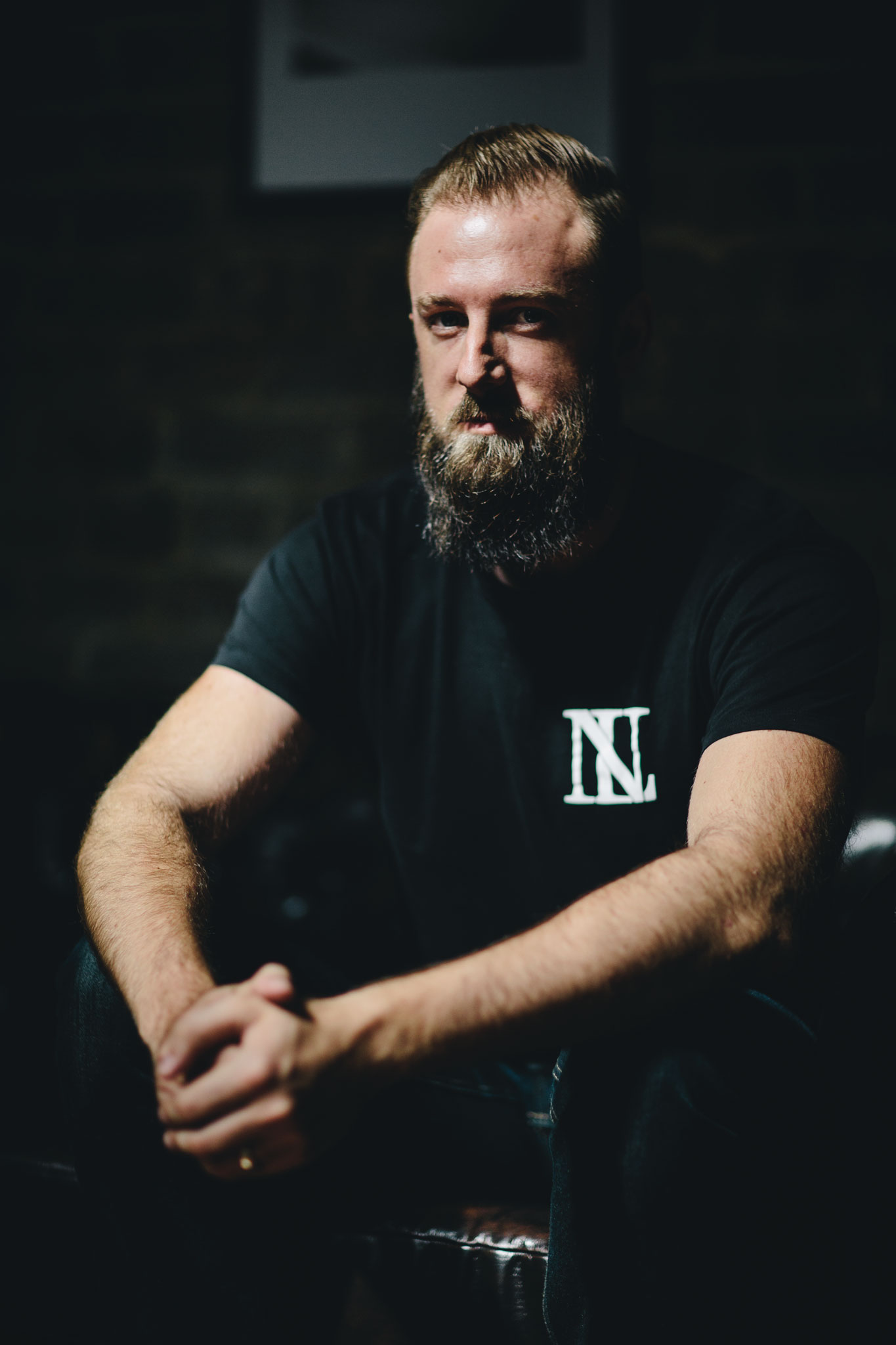 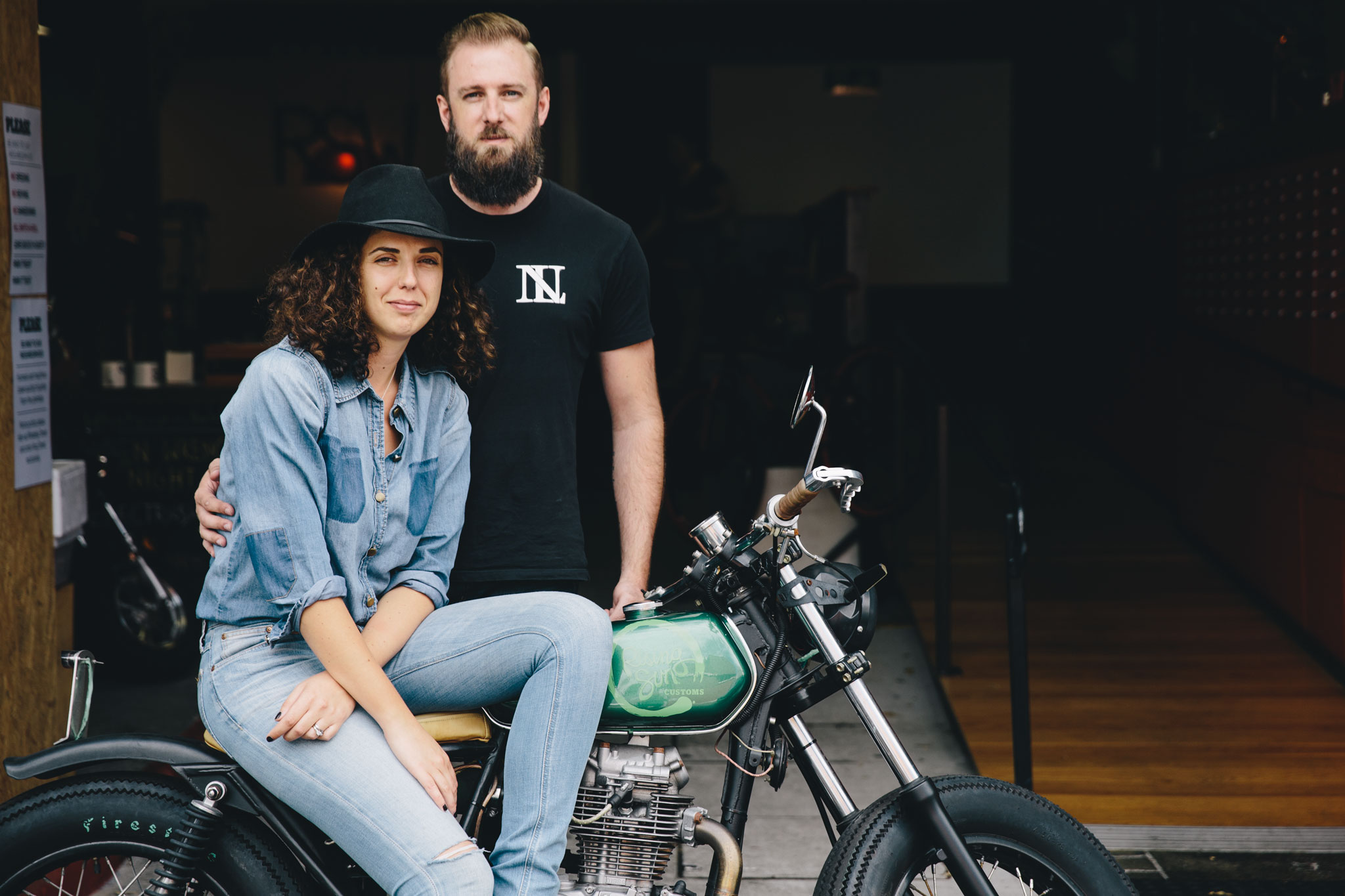