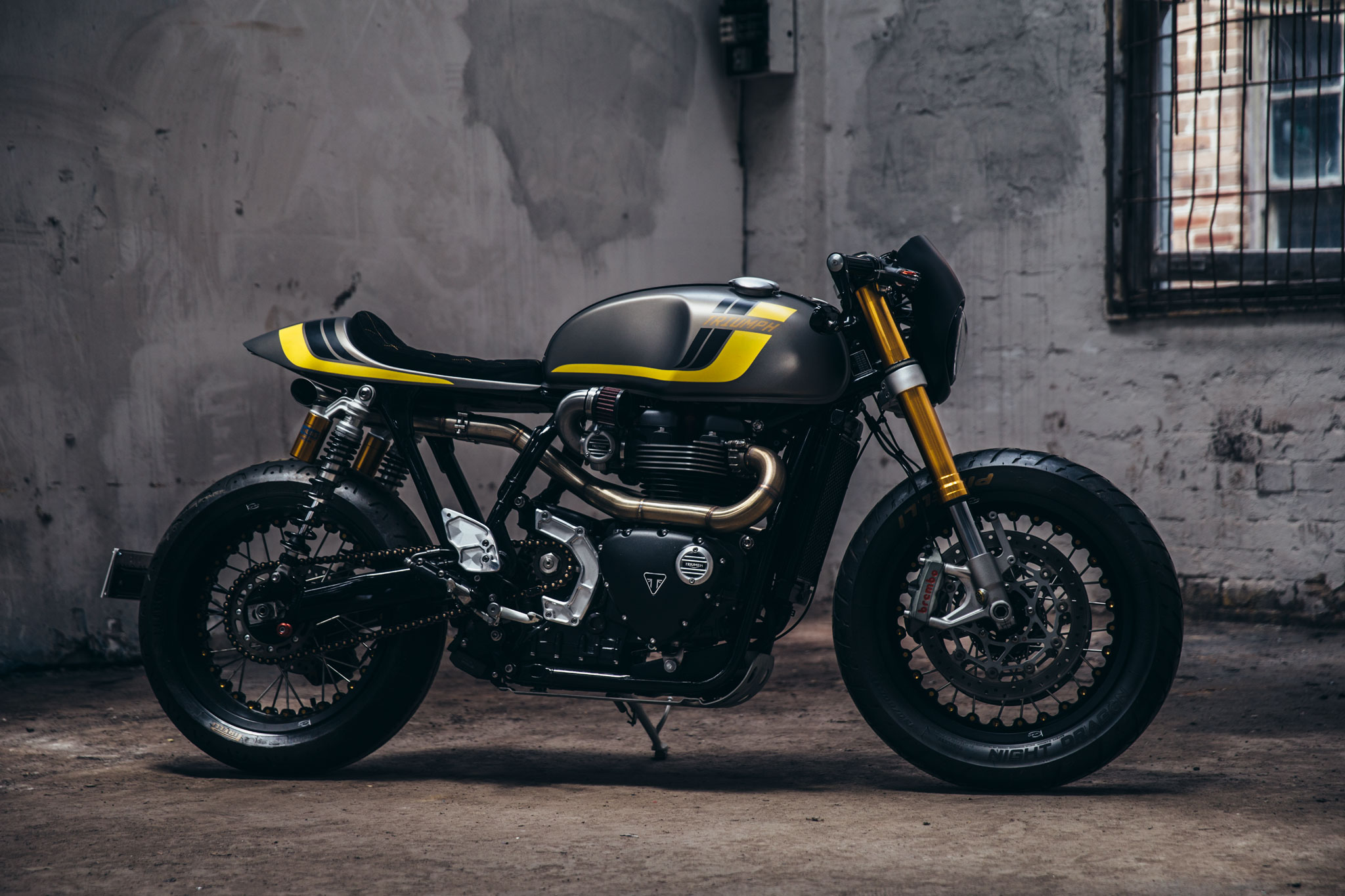 Early in 2017, Wenley (with the support of Pipeburn, Stories of bike, Throttle Roll and Gasoline Motor Co.) embarked on a journey to be one of the first builders in Australia to go absolutely wild on the new Modern Classic base from Triumph Motorcycles. Having always been a Triumph tragic, Wenley chose the Thruxton R as the bike that he would put his pennies, and complete attention to, for 2017.

Triumph Motorcycles Australia loved the idea so much they threw their support behind it immediately. Wenley was to build a killer custom Cafe Racer to be specifically showcased at The Throttle Roll Street Party. But thats not it – once completed, this bike would burn through the marketing circuit around Australia; having more media commitments than Kim Kardashian. 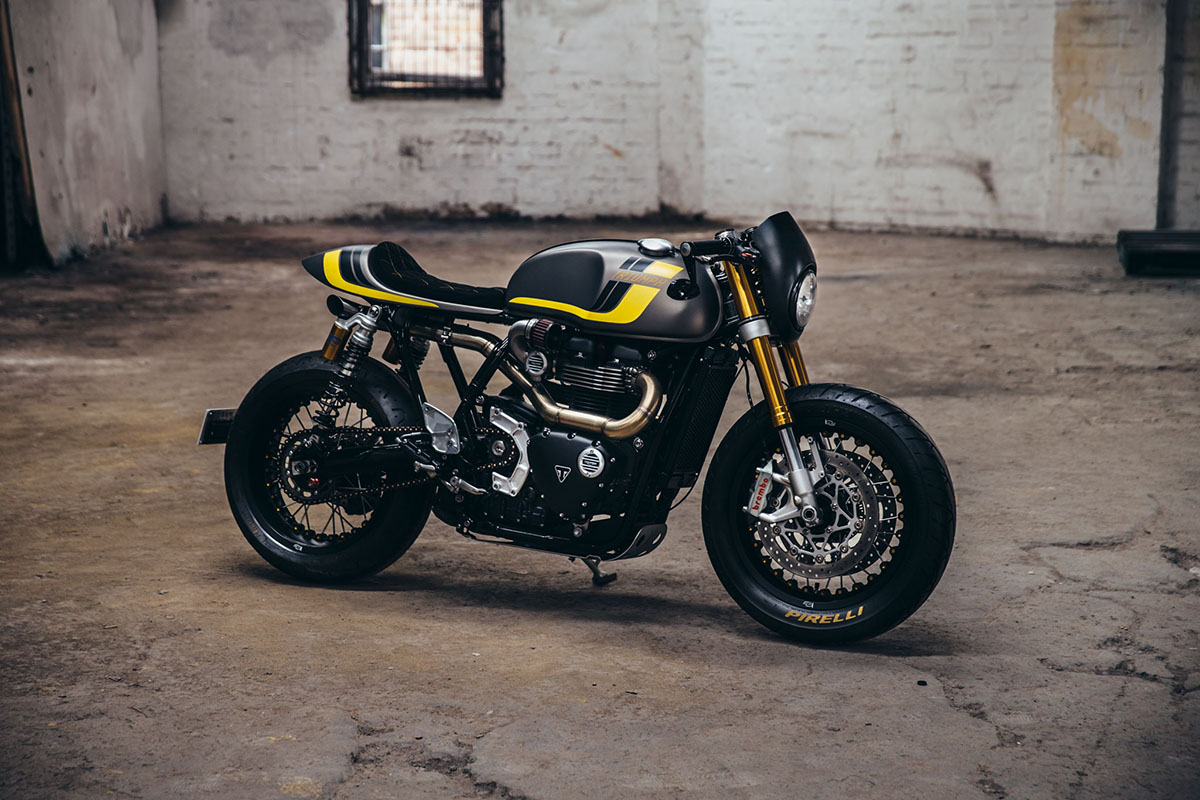 The new Modern Classic range comes with ABS and Traction Control as standard, but for Wenley, that wasn’t going to stay around for too long.  “Yeah fuck that, we immediately took off abs, traction control and put it in sports mode. I was ready to ride, then I shit my pants on second gear when the bike did a wheelie and I almost died. But that being said, with the amount of adrenaline running through my system, it was actually fun. This was a new rush of power from the previous Thruxton and my love of the looks was now on par with my love of its performance.” 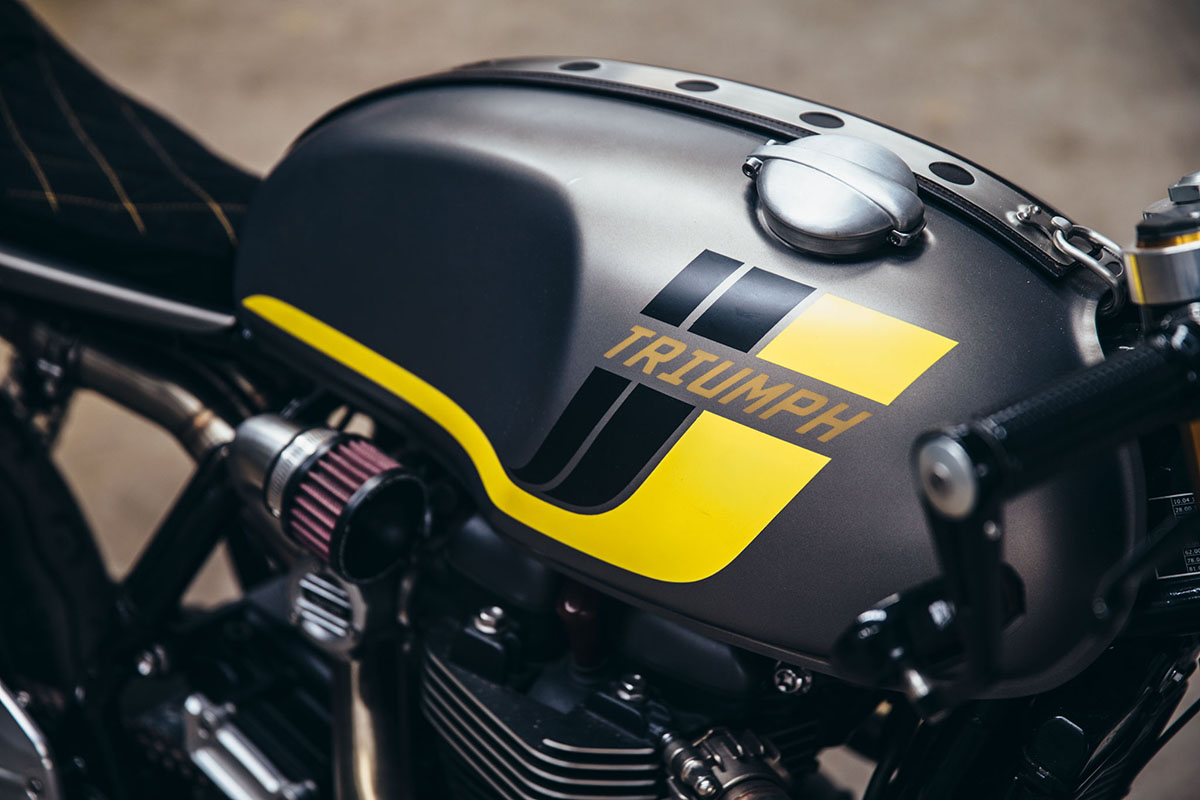 Having recently moved from Perth back to Sydney, Wenley, like most of us here in Sydney, had no where to build the bike. Luckily, Gasoline Motor Co. came to the rescue offering their space, tools, hands and brains to ensure this build was on display at The Throttle Roll Street Party. 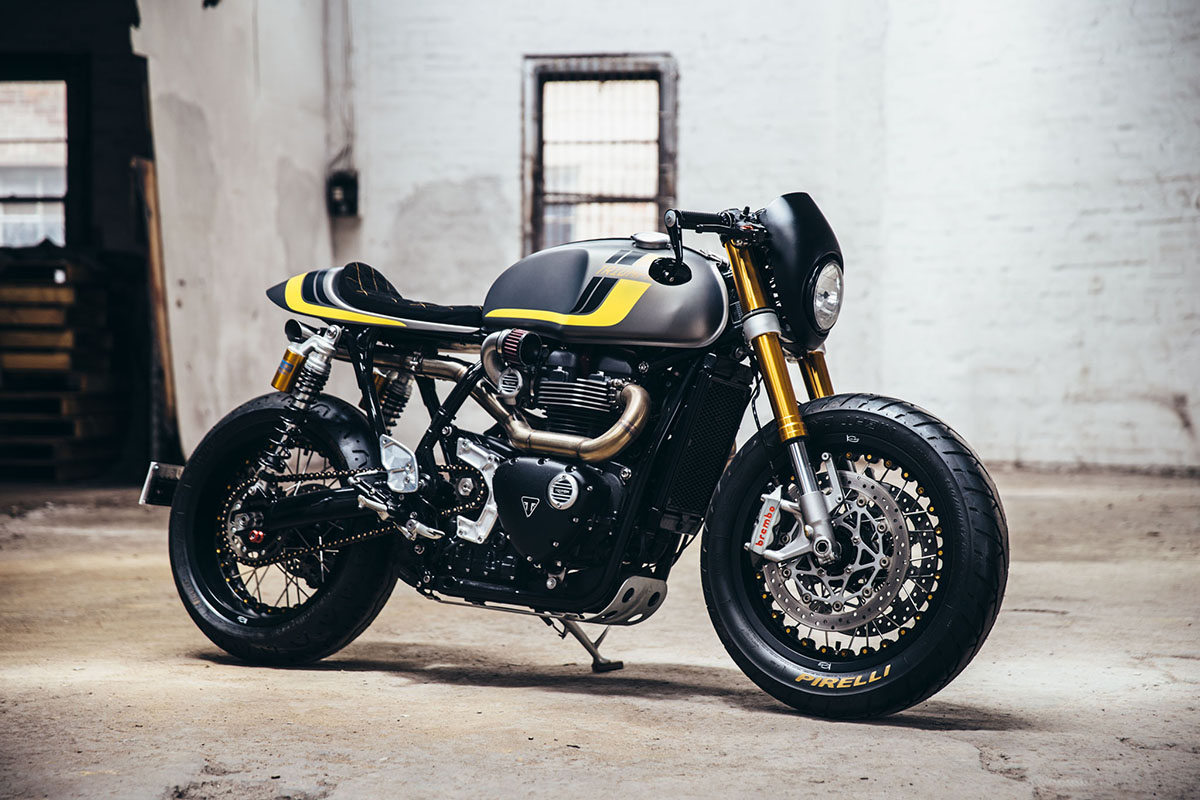 Trying to navigate through all the different ideas bashing around his brain, Wenley had to somehow simplify these ideas into one clear concept. “At first, the intention was to build something simple as I only had 8 weeks to complete it – while maintaining a normal day job. It wasn’t much time at all for a build at this level. The fibreglass seat took the longest to fabricate, it was all done by hand. I hunted around for a week looking for something that would suit. I ended up buying 3 seats, however, I ended up using what was right under my ass the entire time. Instead, I used the same design of the standard seat; creating it smaller and in one piece. It took a lot of moulding and shaping to get the lines right. I am super proud of it, and it’s great to pay homage to the original vision by Triumph Motorcycles.” 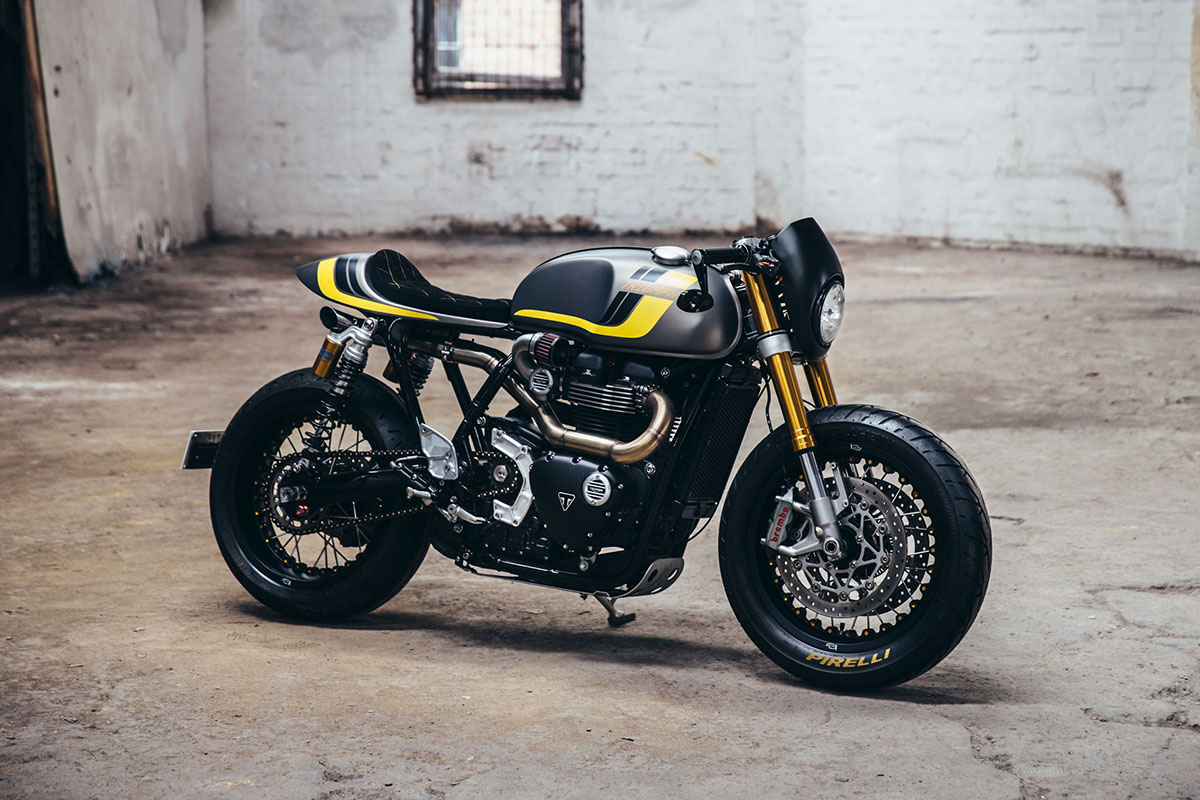 As with all custom builds we feature, there are tens-to-hundreds of aspects changed throughout a build. It doesn’t start or end with just some cushion for your tush(ion). Next up on Wenley’s agenda was the air box and electrics. Sounds like fun, right?

“The air box had to be removed, surprisingly that wasn’t too hard. The main challenge was the speedo! The bike would not start if any wire was missing, so here the real challenge began – figuring out how to connect all the Motogadget gear while maintaining the electrics. A lot of the details are a blur while I tried to balance work, sleep and building, but I made it work, and it works amazingly”

However, this is just the start – the challenges kept throwing themselves at him, hard and fast! 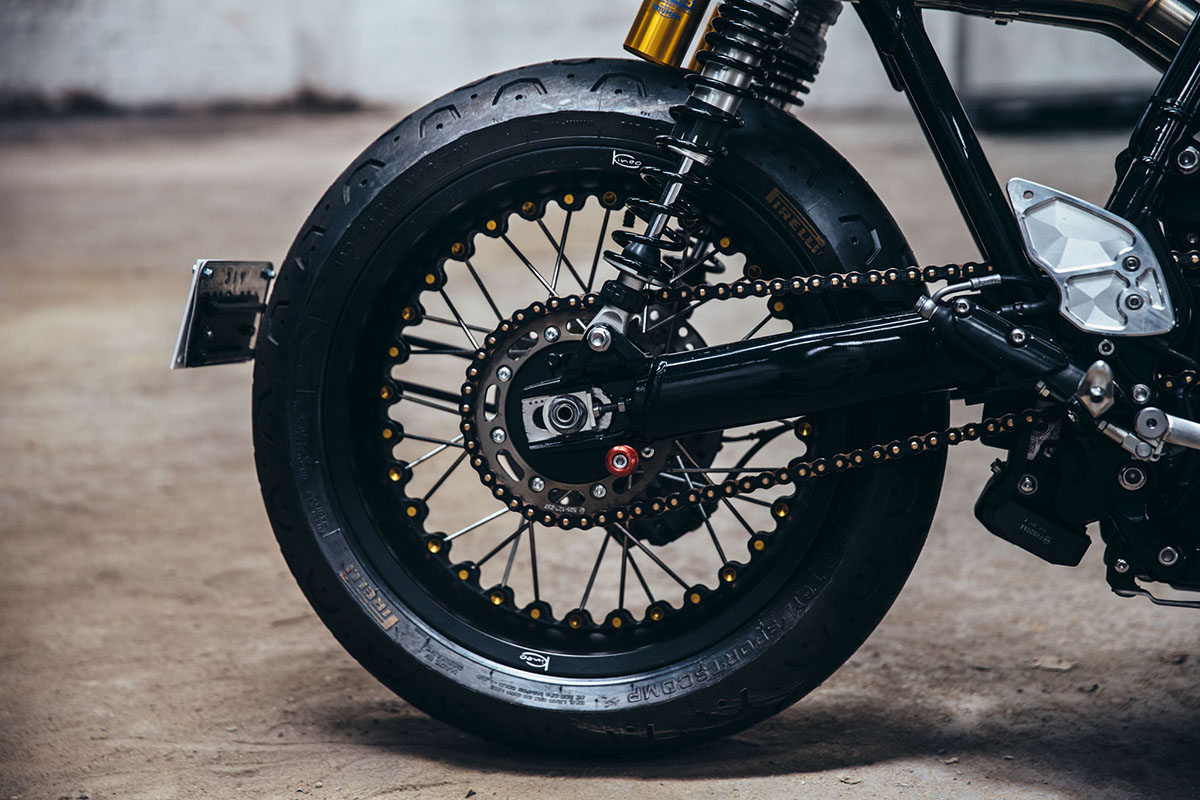 “My next step was to make a cool surround for the new speedo, drawing on inspiration from race cars like Lamborghini, Ferrari etc. I came up with a design which included a start button with a race inspired CNC triple clamp to match. I then focussed on the heel guard, sprocket cover, number plate holder and custom internal throttle cable kit. Running an internal throttle cable in conjunction with the Electronic fly-by-wire took a stroke of genius that I do not wish to explain just yet.” 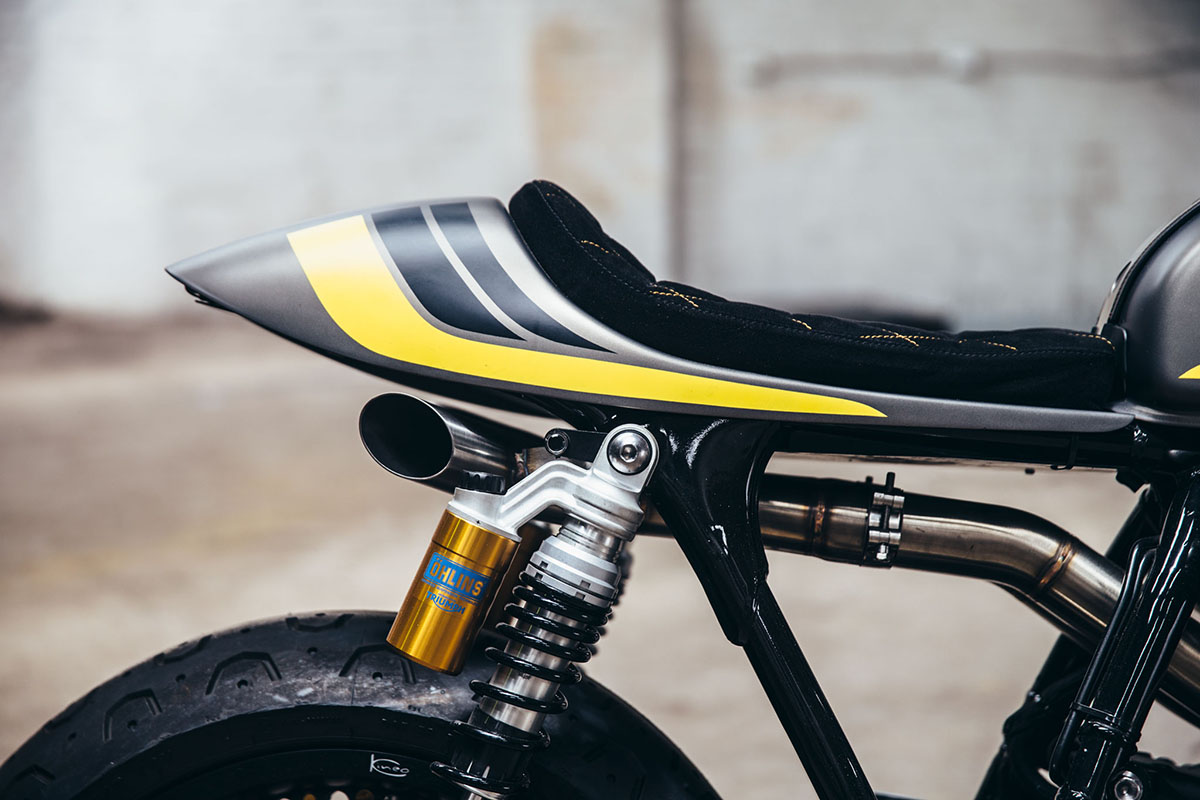 With only a few weeks until the star of Throttle Roll Street Party was born, the tins still need paint! Wenley is a huge fan of the Satin Grey Mercedes AMG C63, so needless to say he chose a similar colour. Following the lines of the C63’s paint job helped him form the lines for this amazing build. If there is one painter in Sydney always up for a challenge, it’s Kyle Smith of Smith Concepts. Kyle jumped on board, laying down his skills with the gun across the tank, seat and cowl. 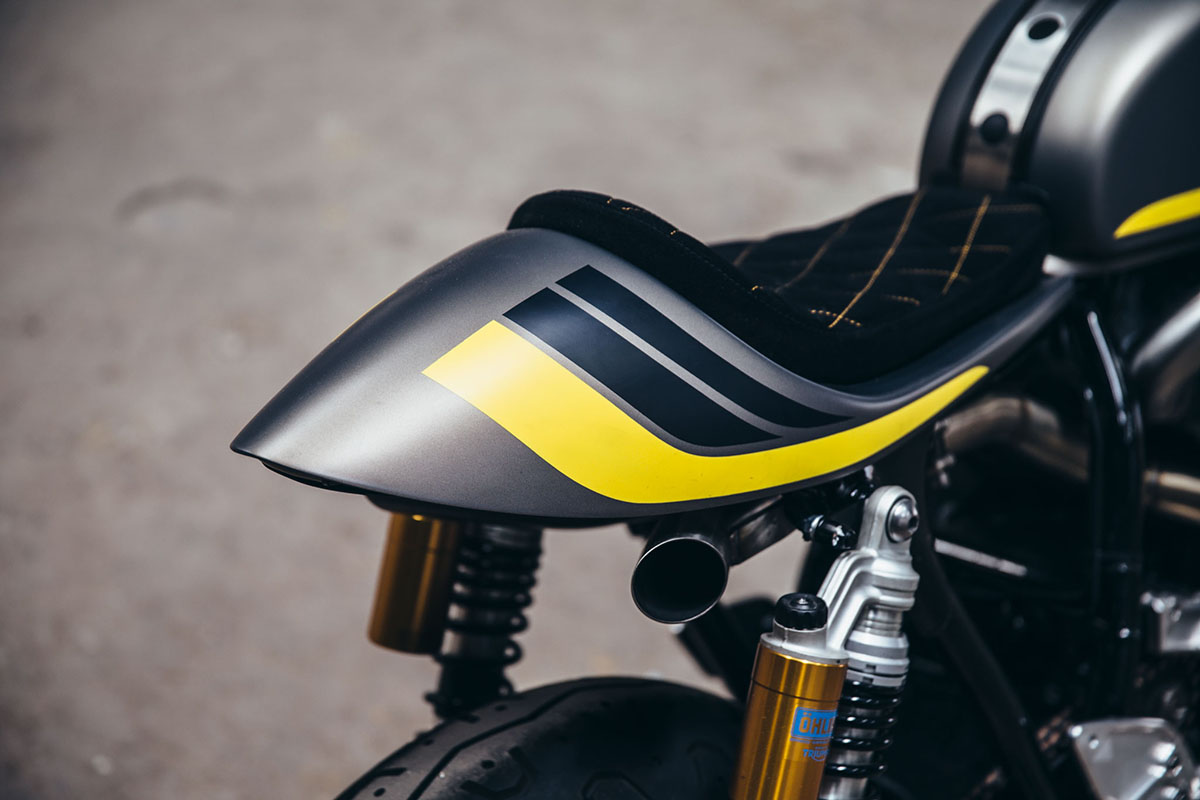 Next up – wheels! Not just any wheels. The original wheels Wenley wanted for his creation were carbon, however, the wait of 6 months just didn’t cut it. Kineo Wheels came to the rescue after learning of his crazy 8 week build. He also had to sell a Kidney to afford it, but we both agree it definitely makes the bike. 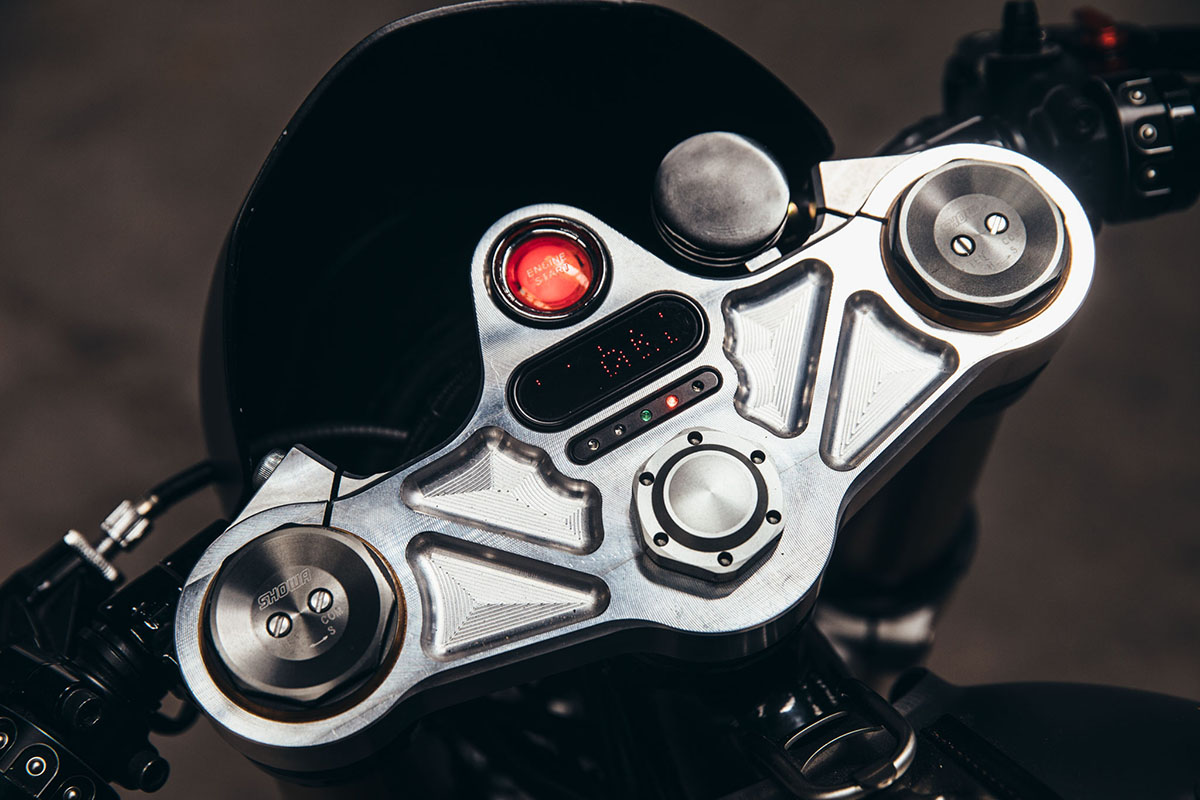 Wenley is known for some crazy exhaust concepts, and this was to be no different. 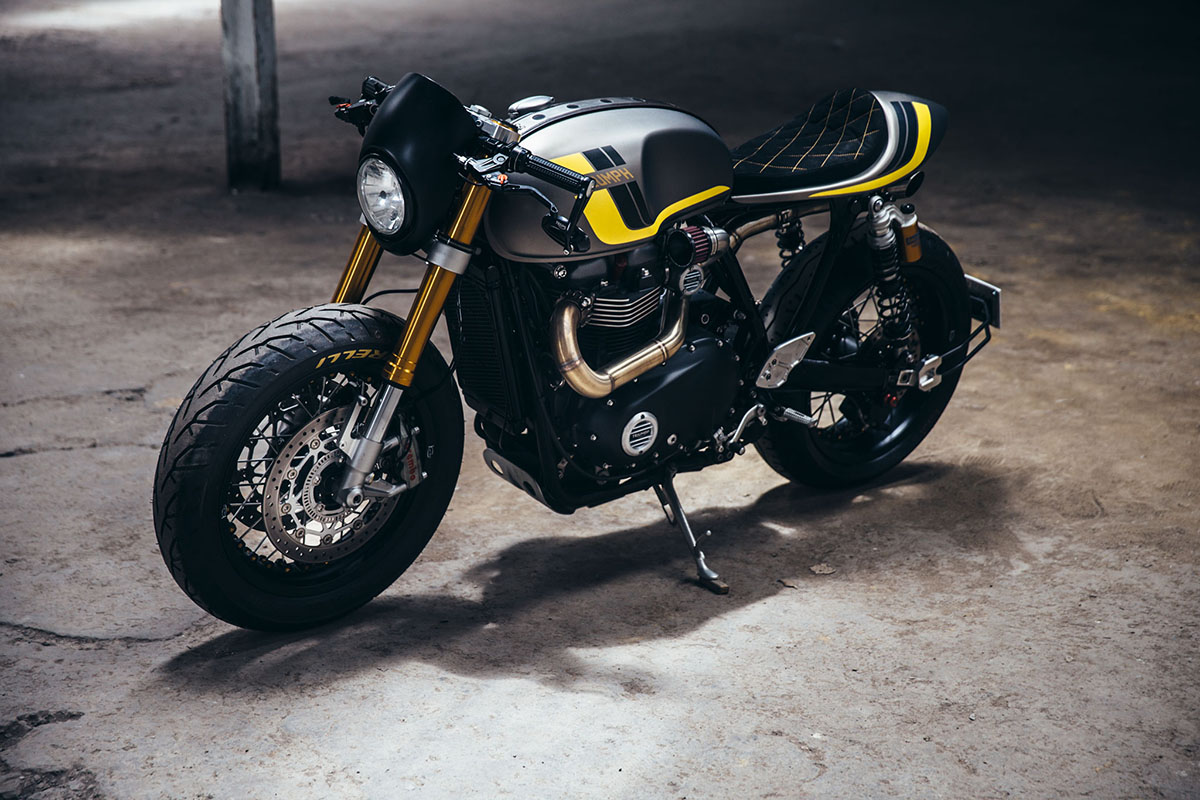 With the exhaust finished and air pods customised, the bike was tuned by the folks at Bikebiz Granville (Australia). The torque curve was exactly what Wenley had wanted, giving him amazing low end torque which is perfect for the streets of Sydney. 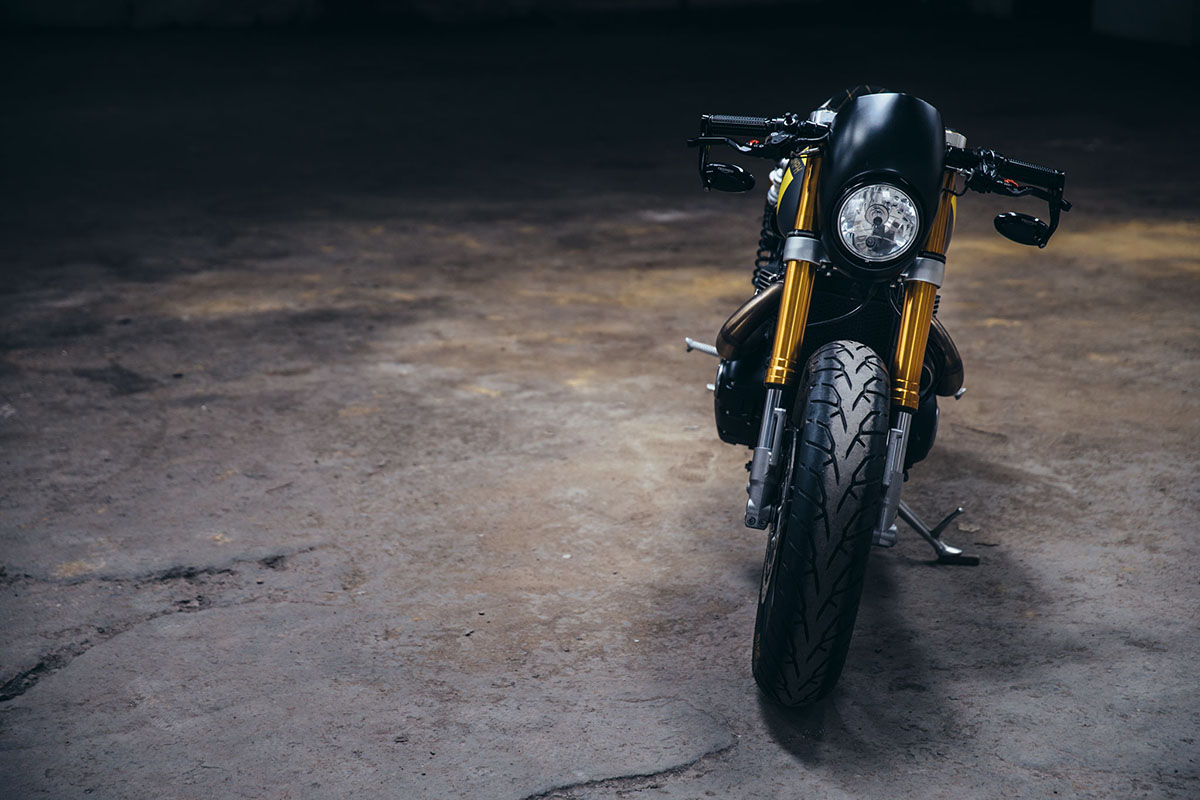 And as this fairytale comes to a happy end, silence falls for Wenley’s final words.

“This was quite a fun build. All up, close to 250 hours went into this with no expense spared. It was a huge amount of work with a high level attention to detail. All the tabs were removed, re-sprayed frame, swing arm and springs. This build was sheer blood, sweat and celebratory beers. The fabricating of one-off custom parts took up a heap of that 250 hours. The electrics with the Motogadget speedo and switches may be overkill, but that is the point of this bike. Its built to perform, grab attention, win trophies and above all – its built to be ridden. The attention it received at The Throttle Roll Street Party warranted the hours I put into this build, along with the hard of work of all the individuals that helped out. A massive thanks to all of them”

Special Thanks to The Commune for the their ongoing support and amazing space. 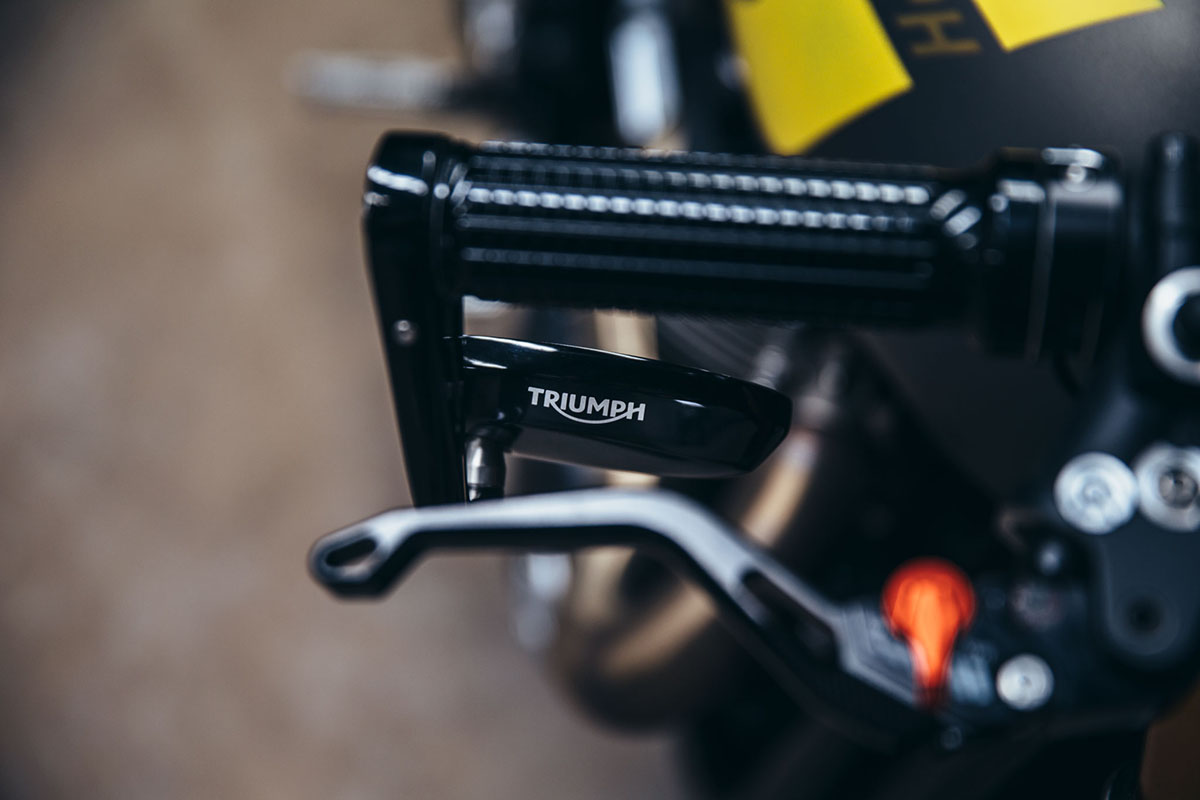 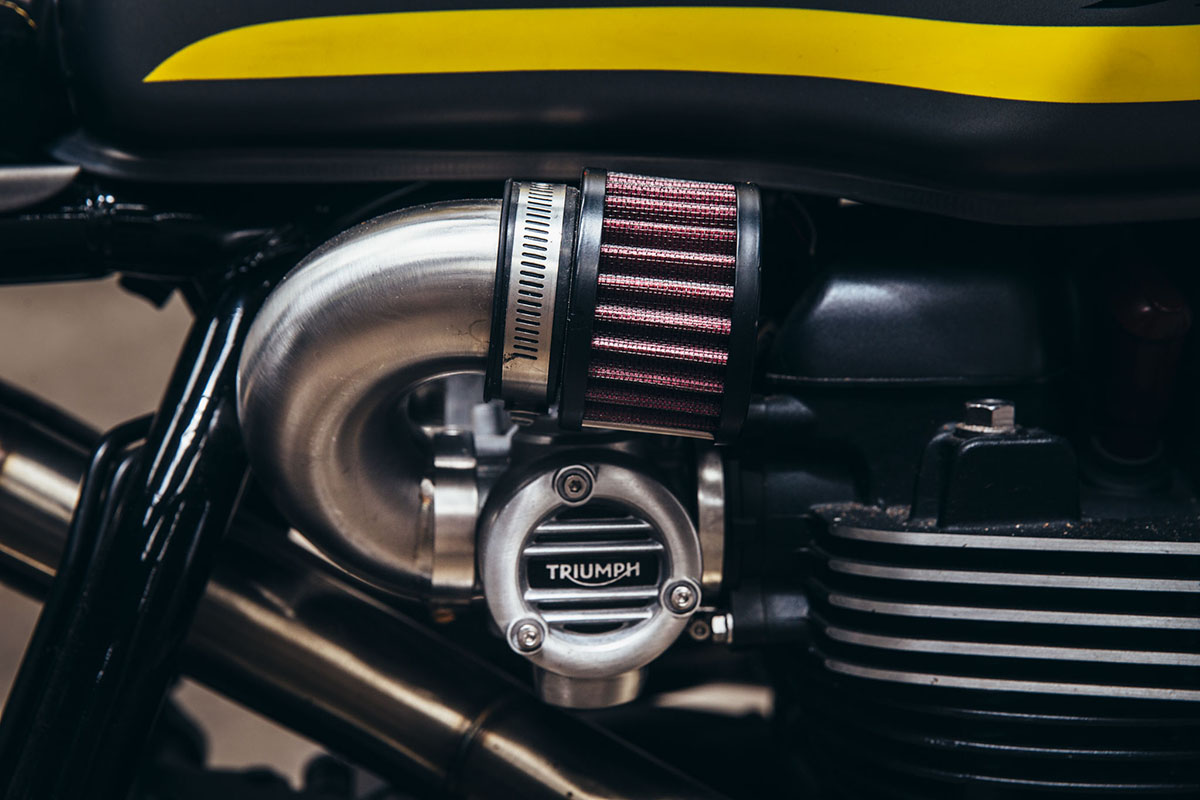 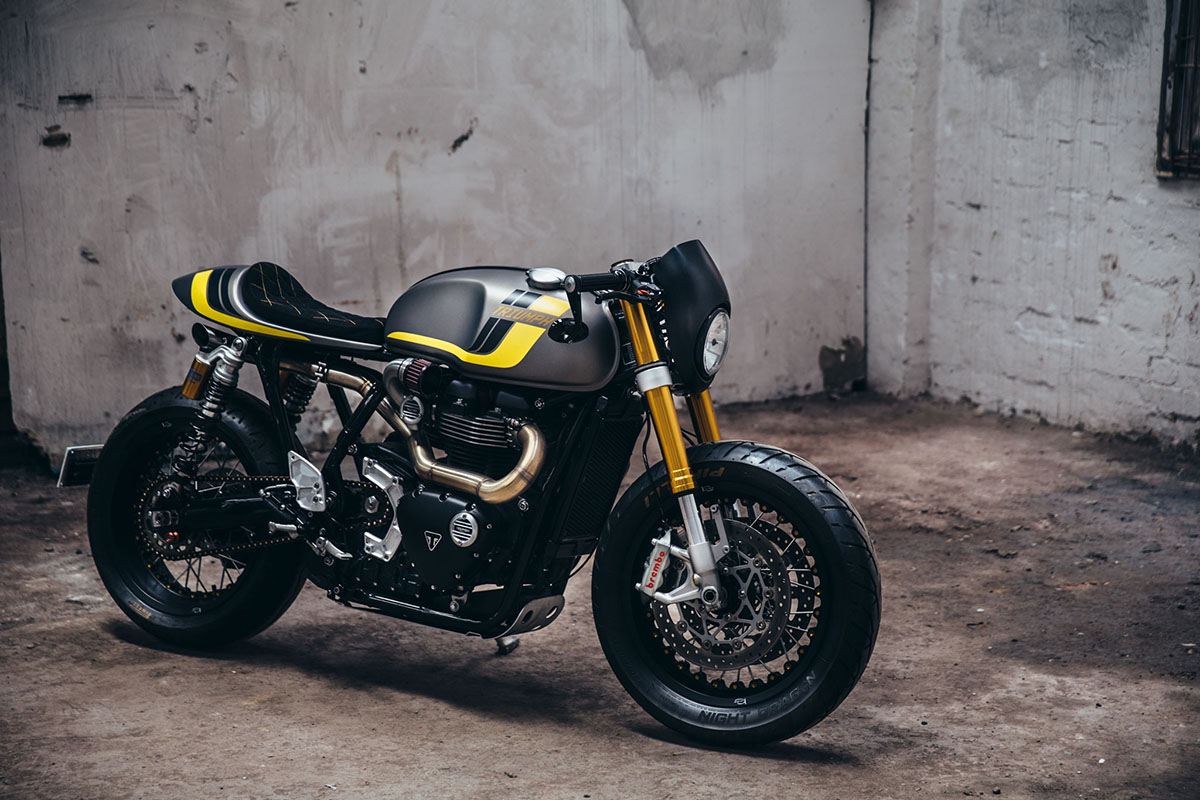 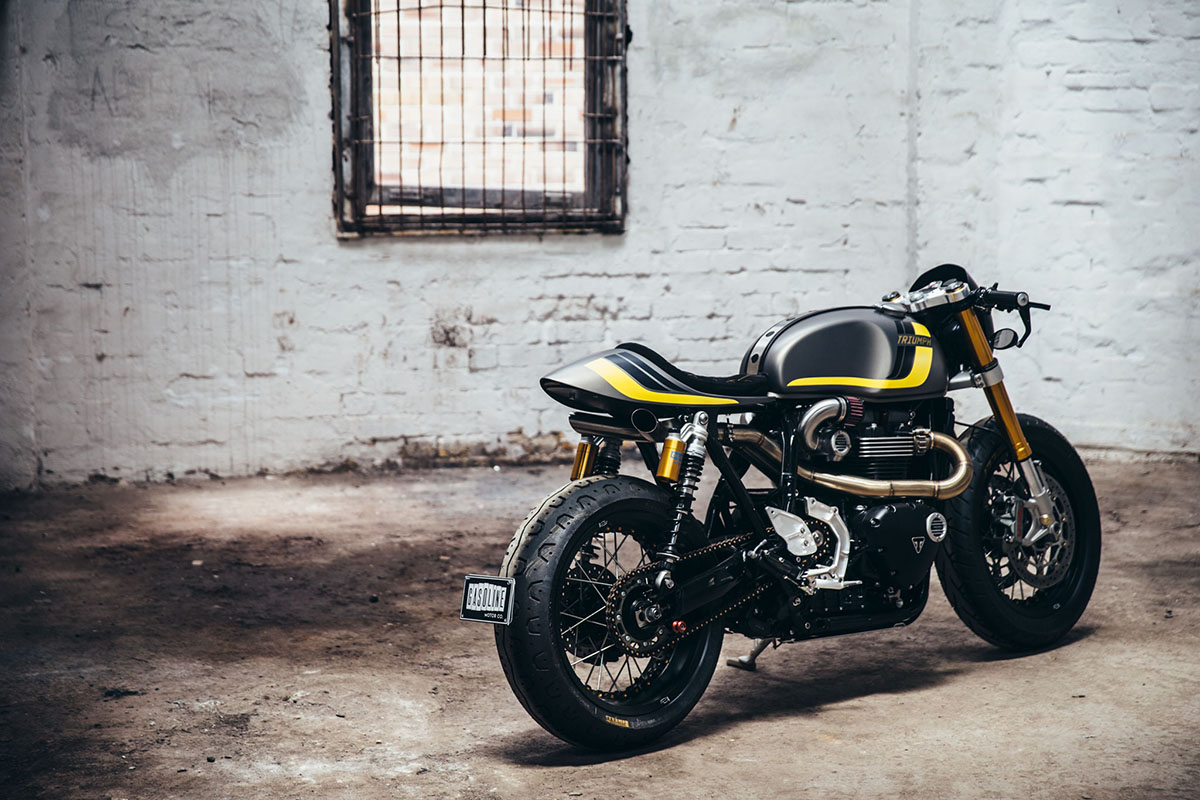 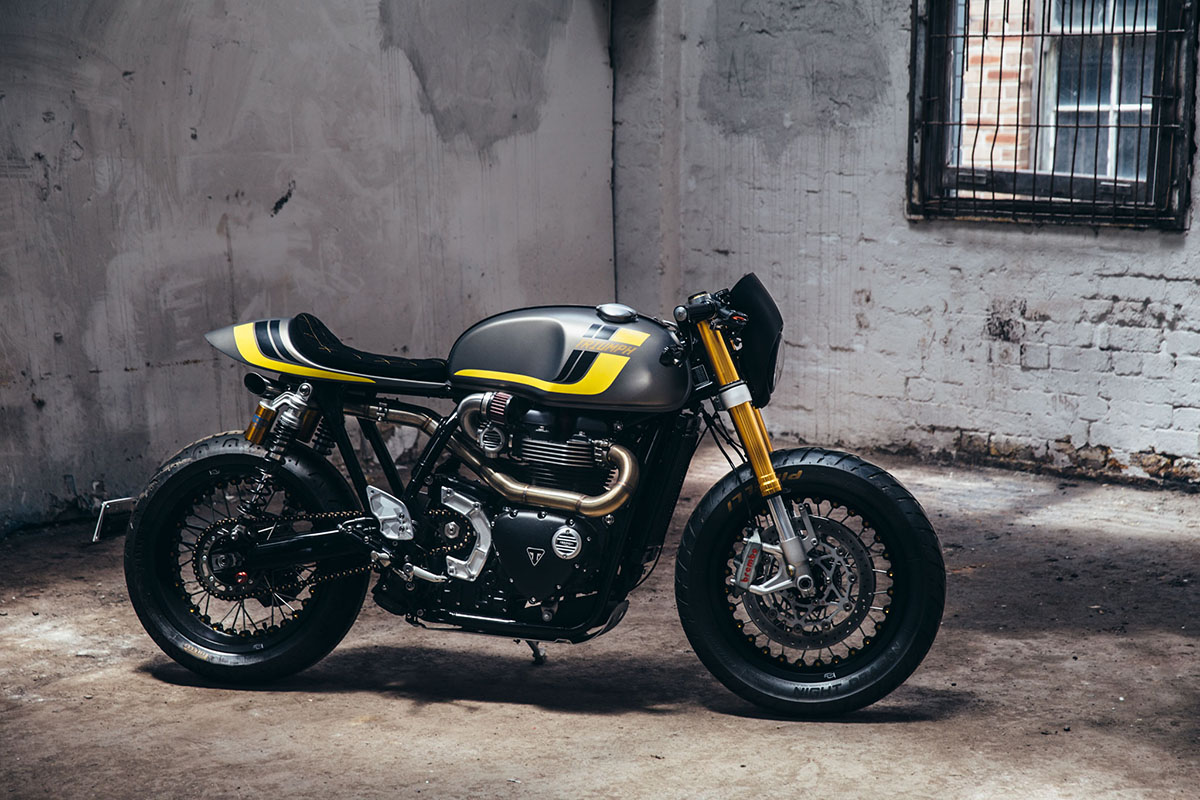 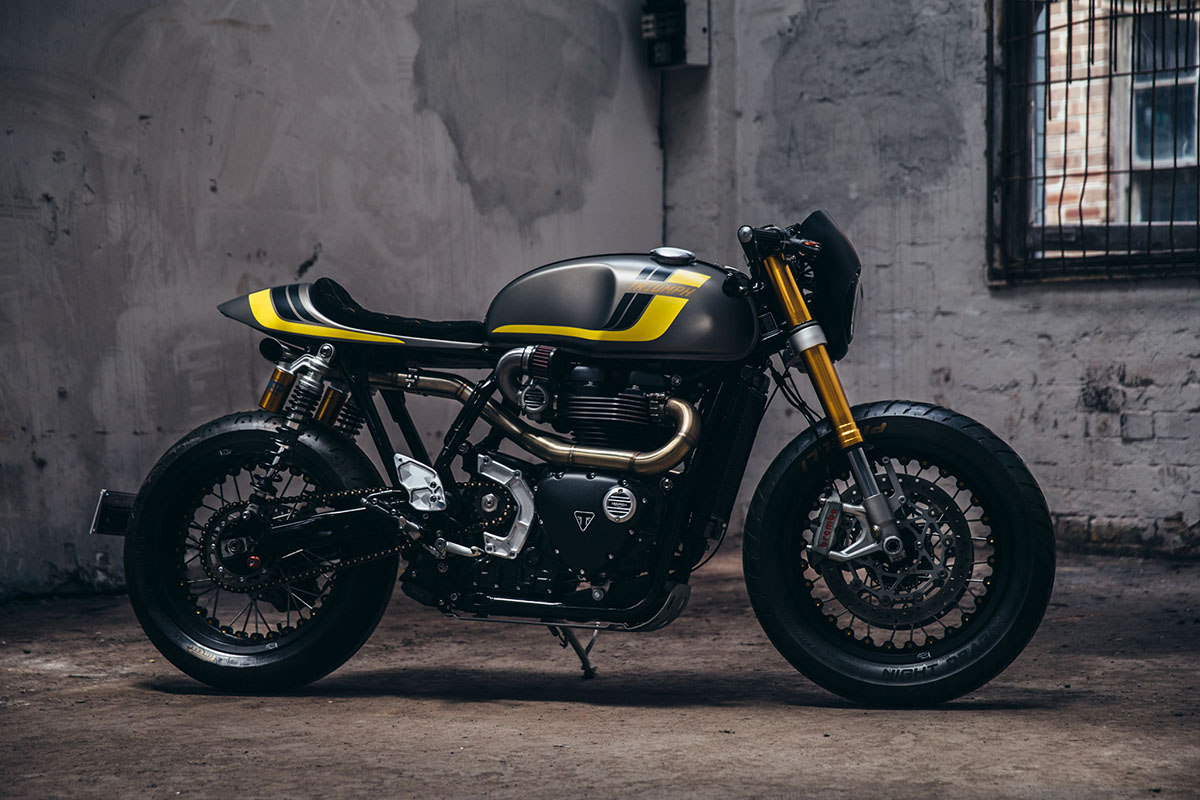 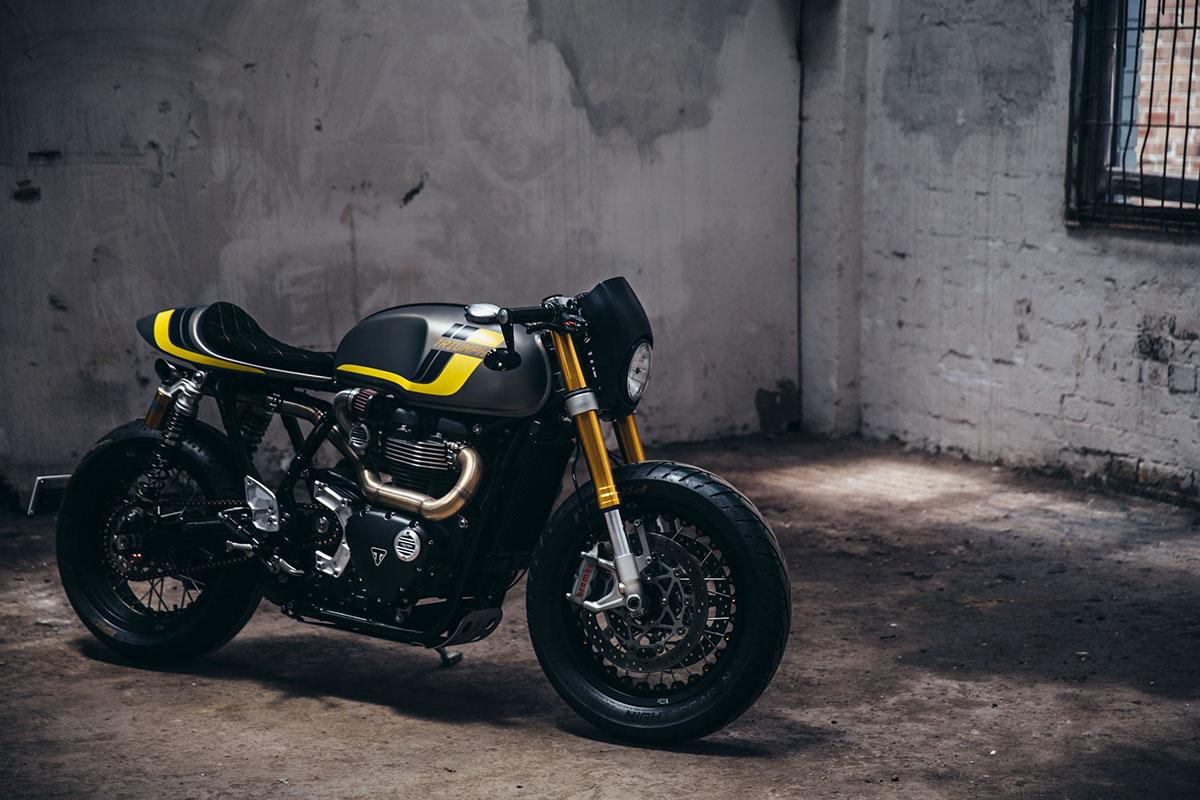 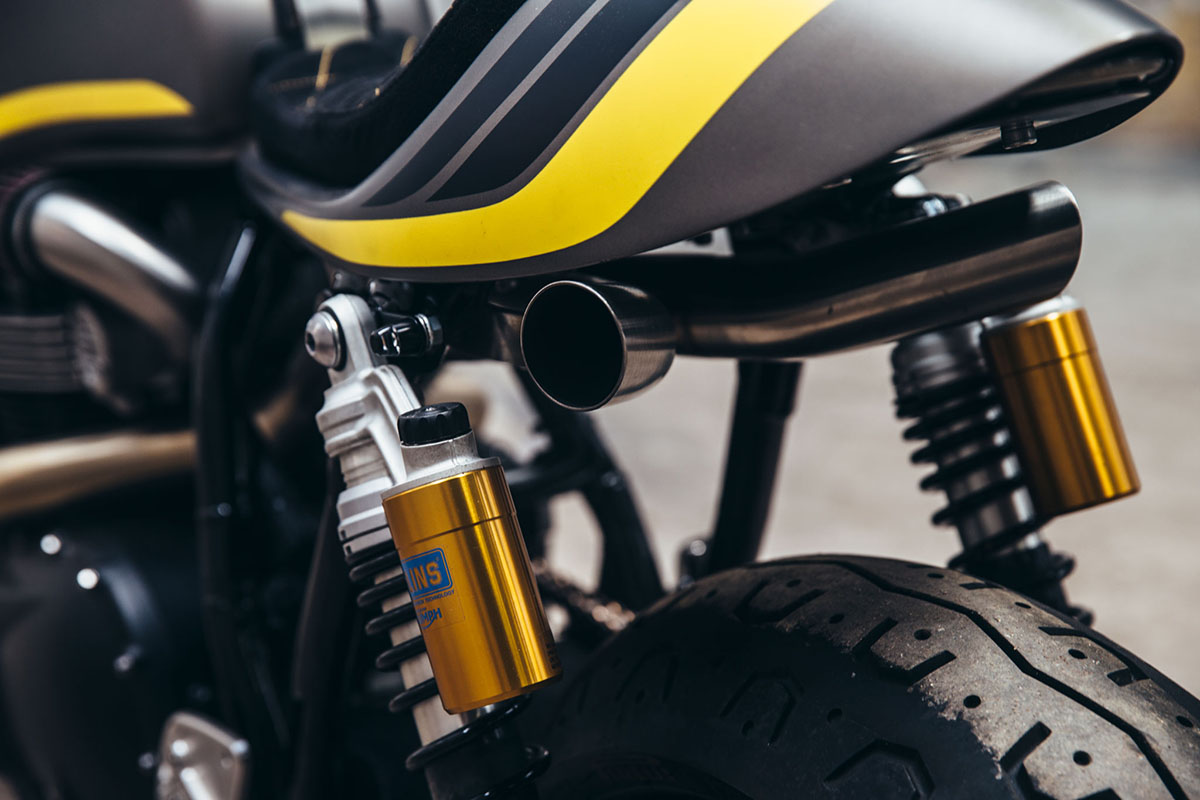 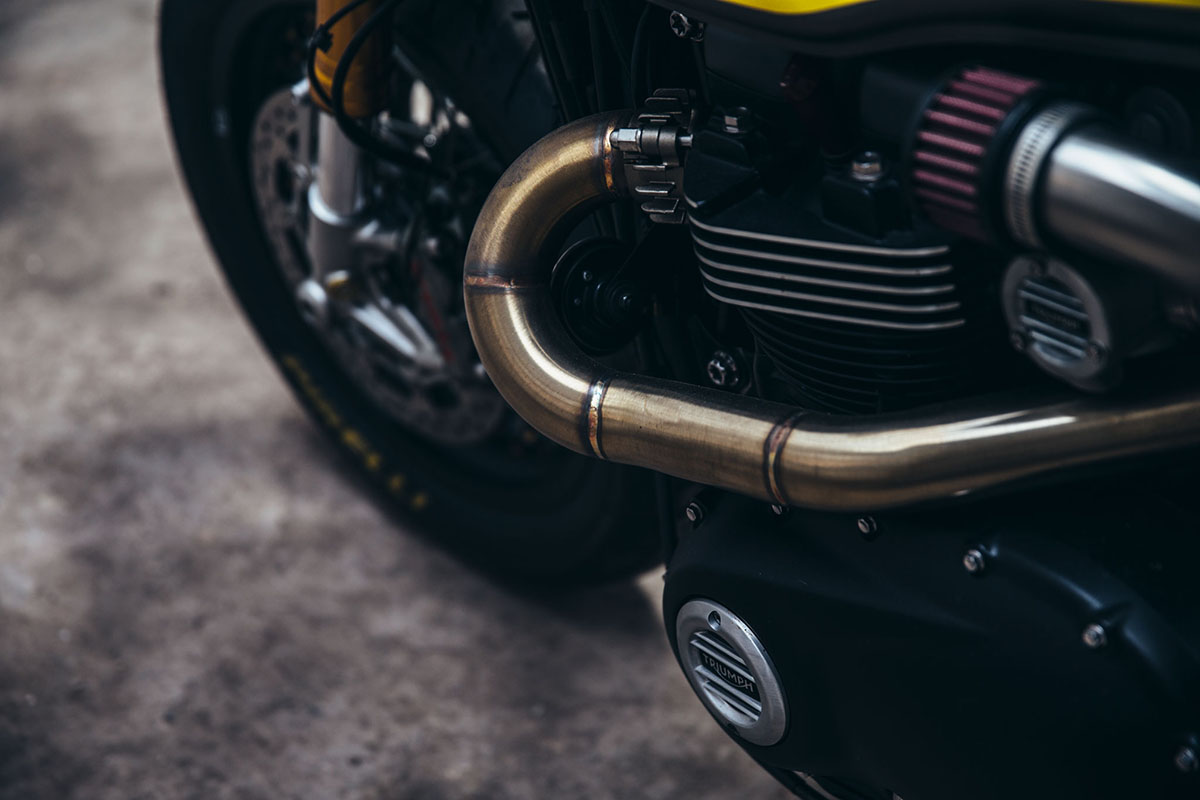 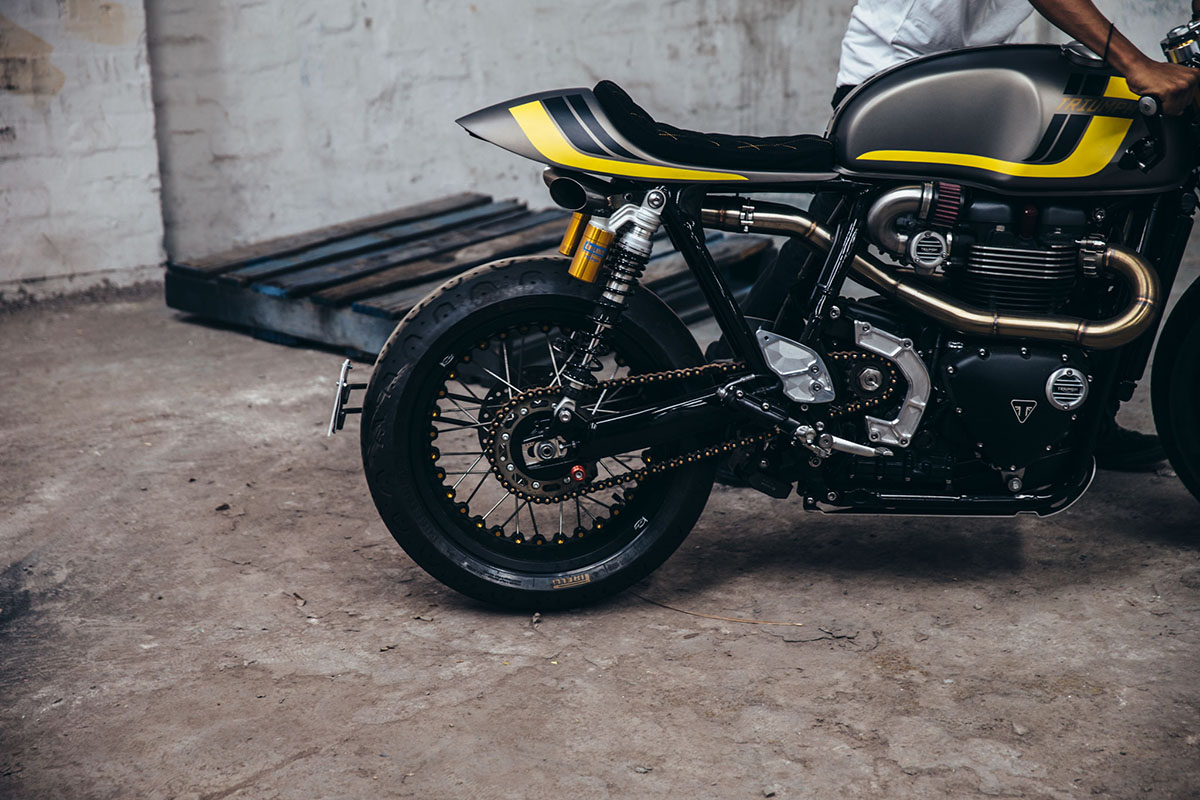 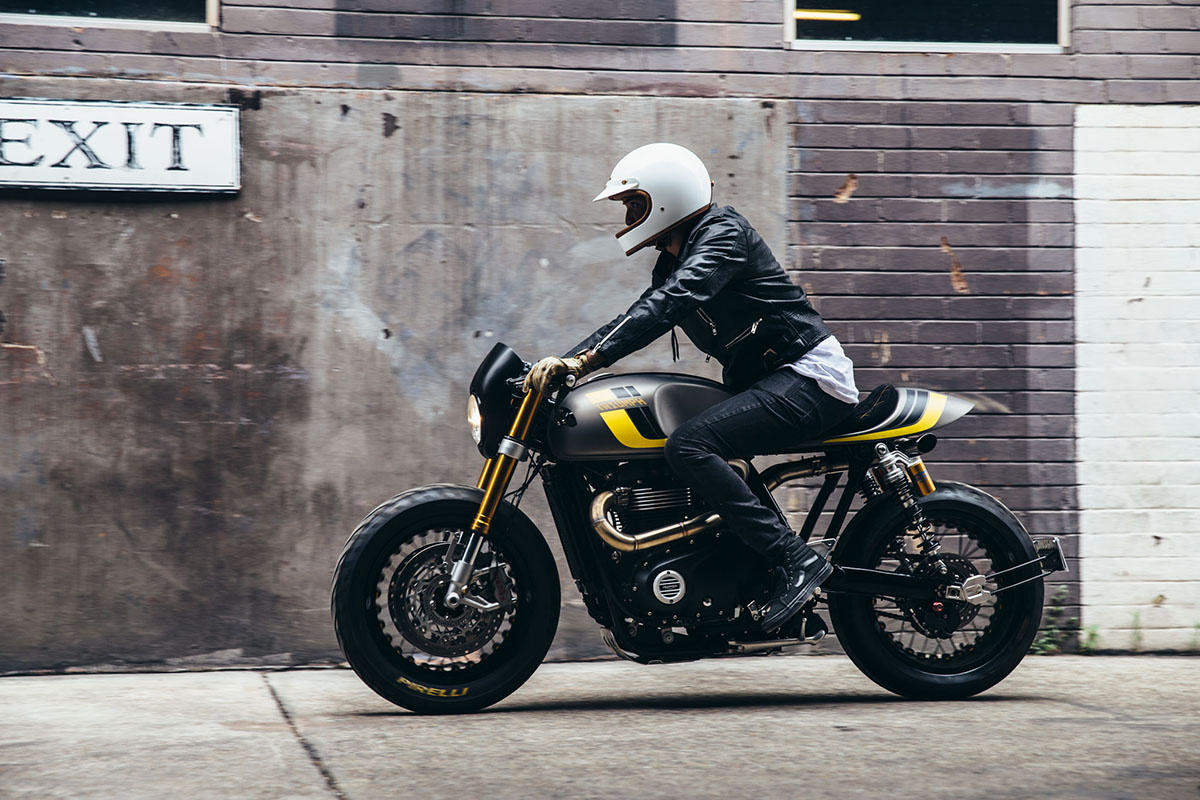 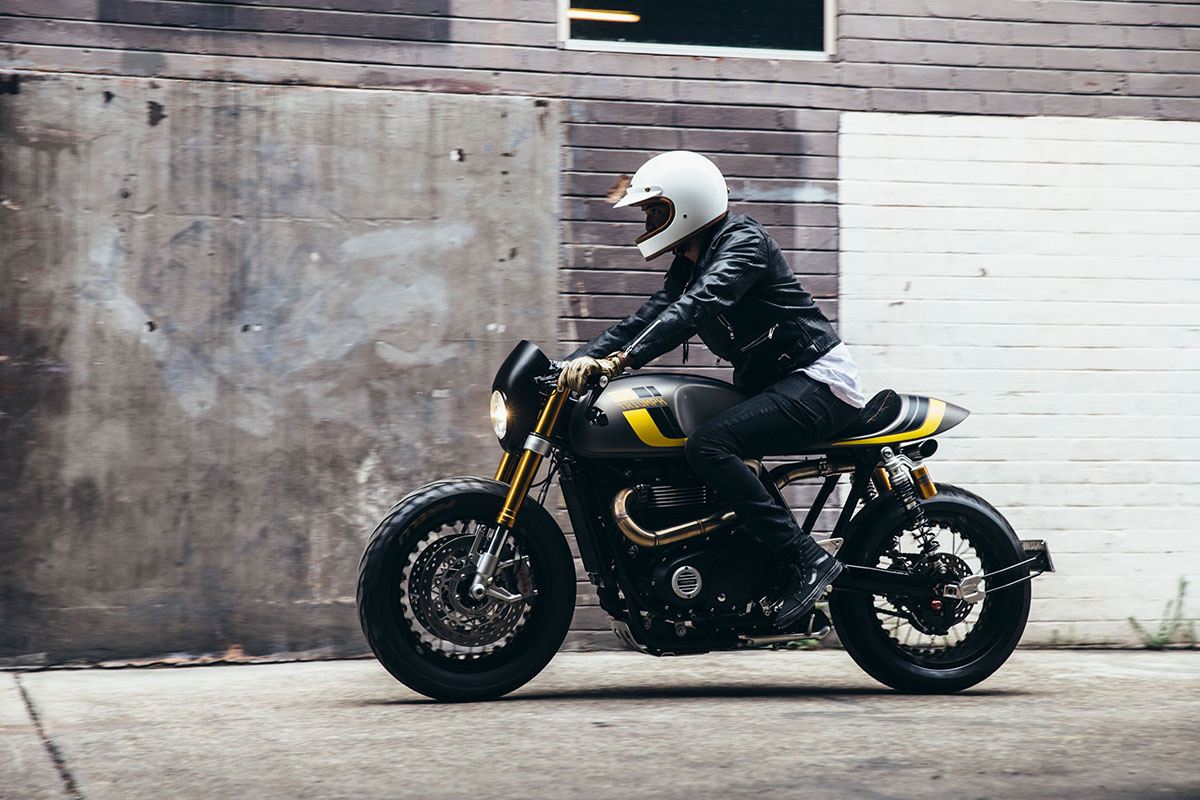 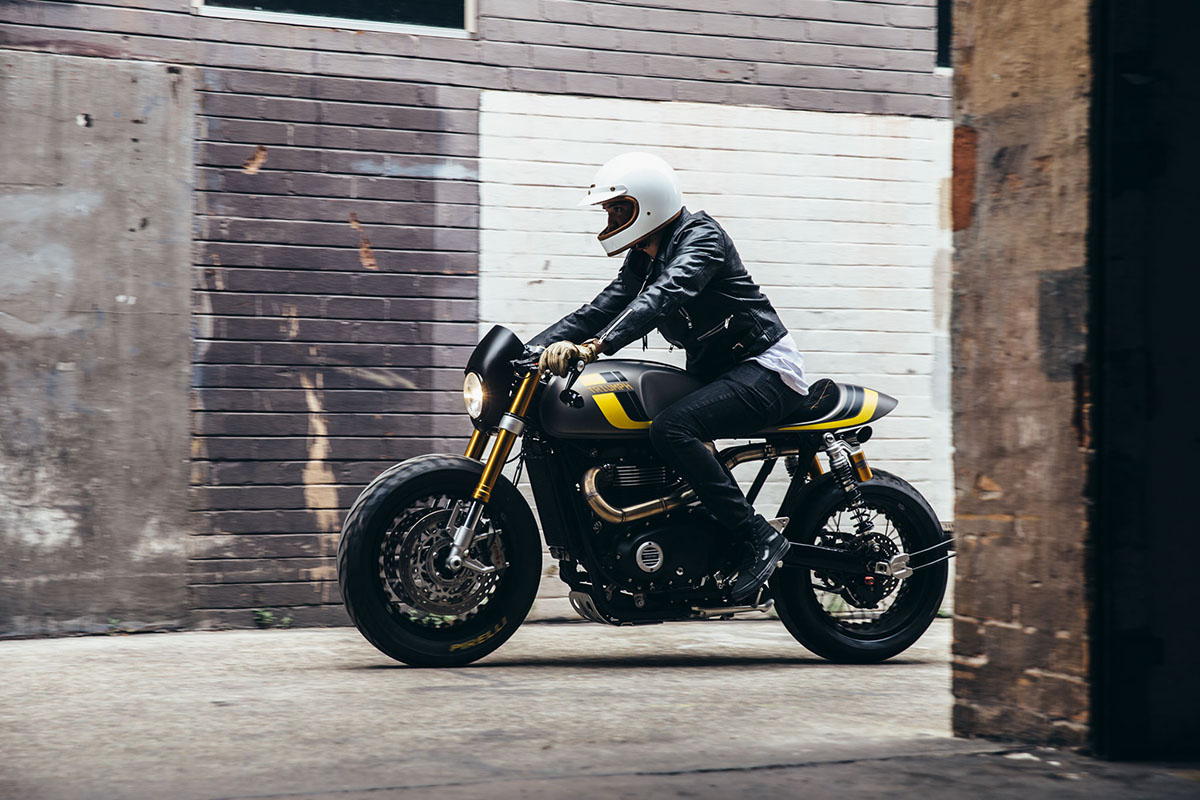 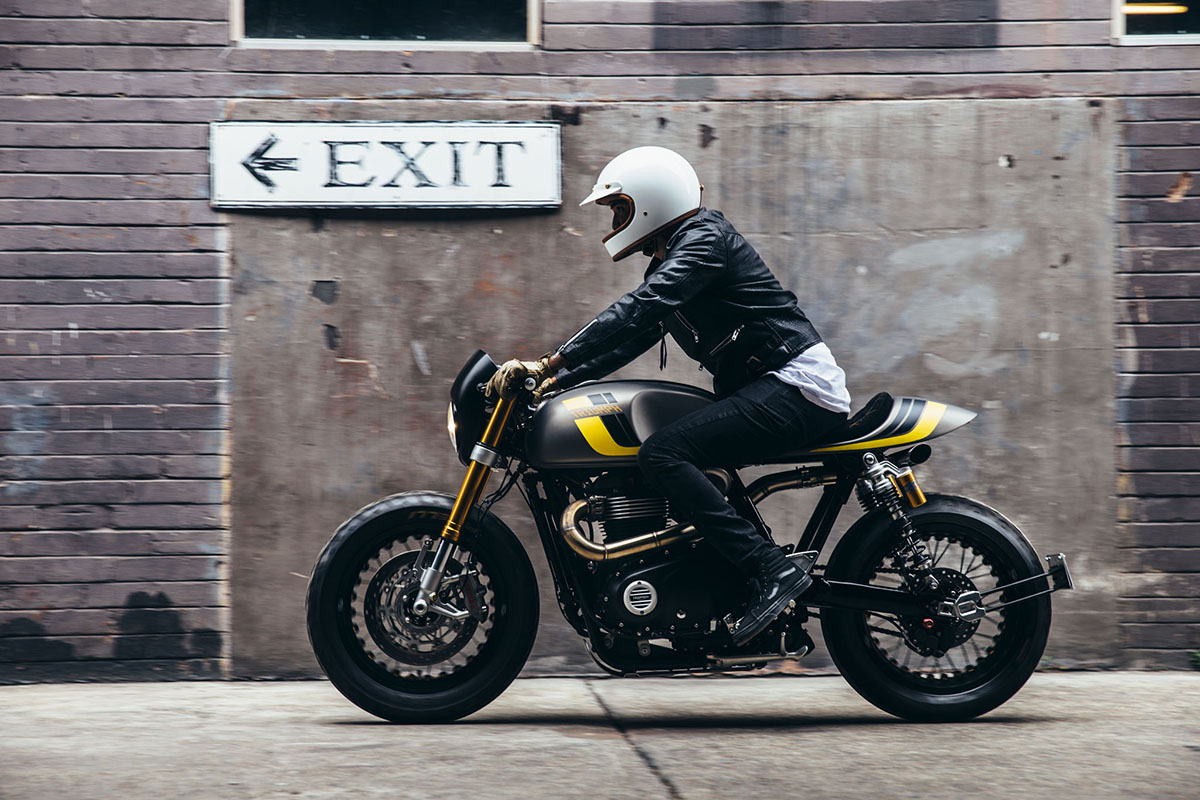 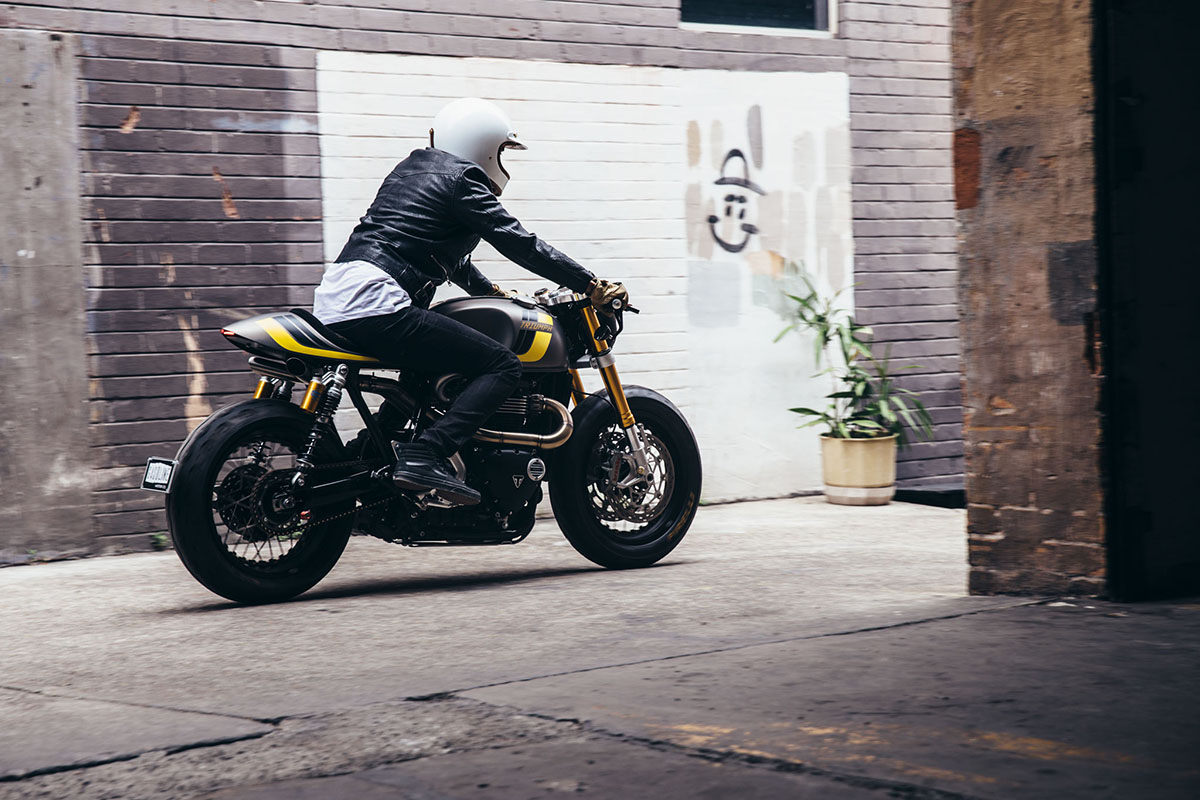 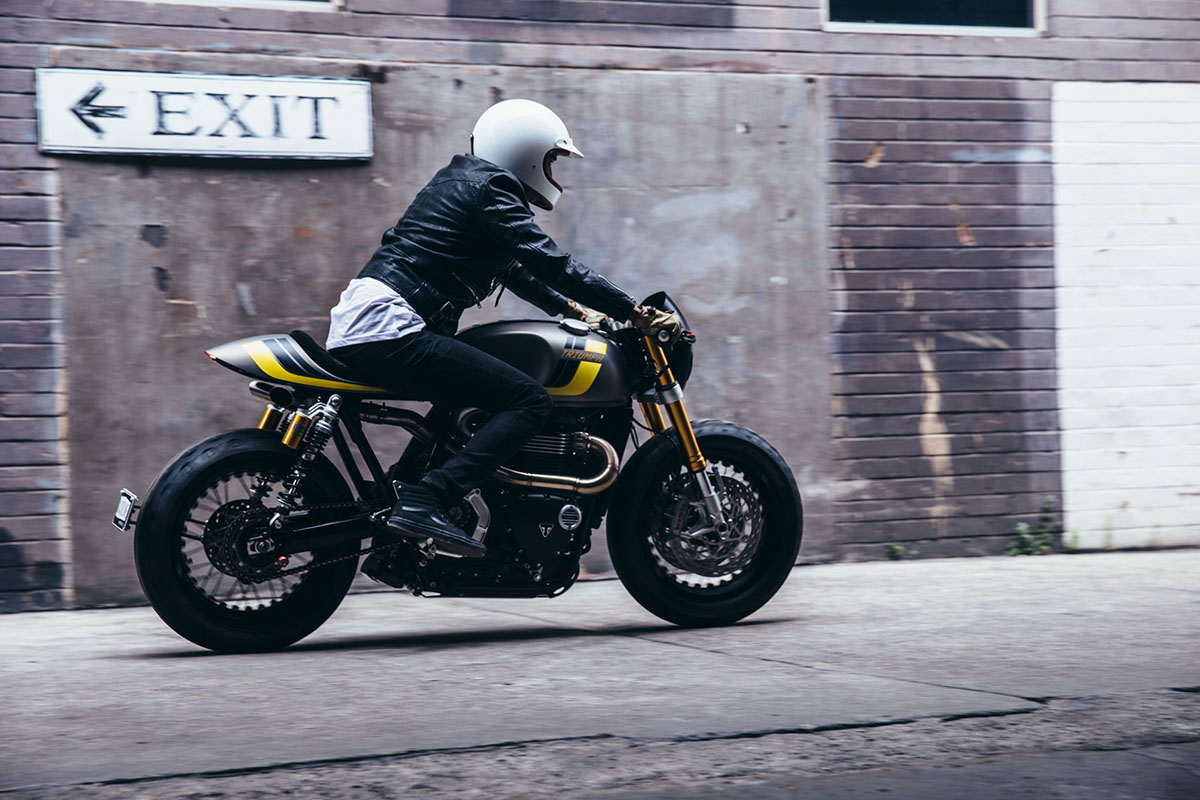 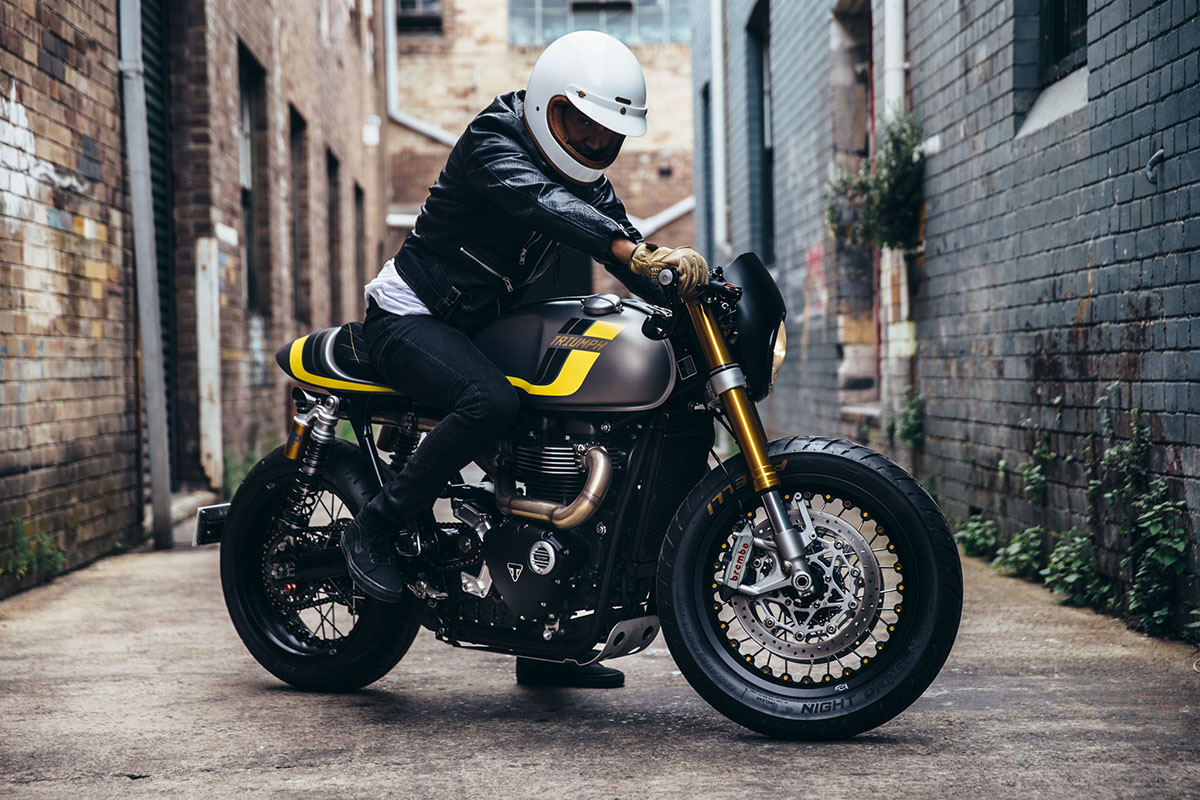 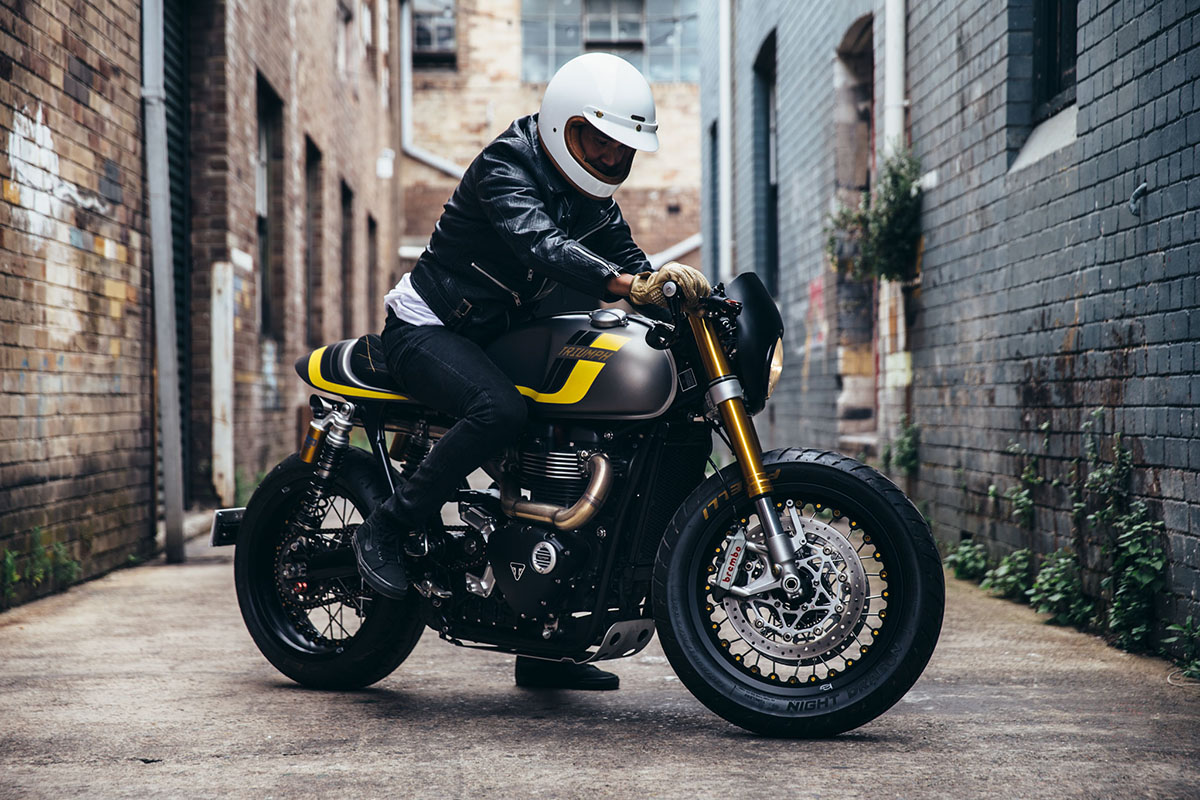 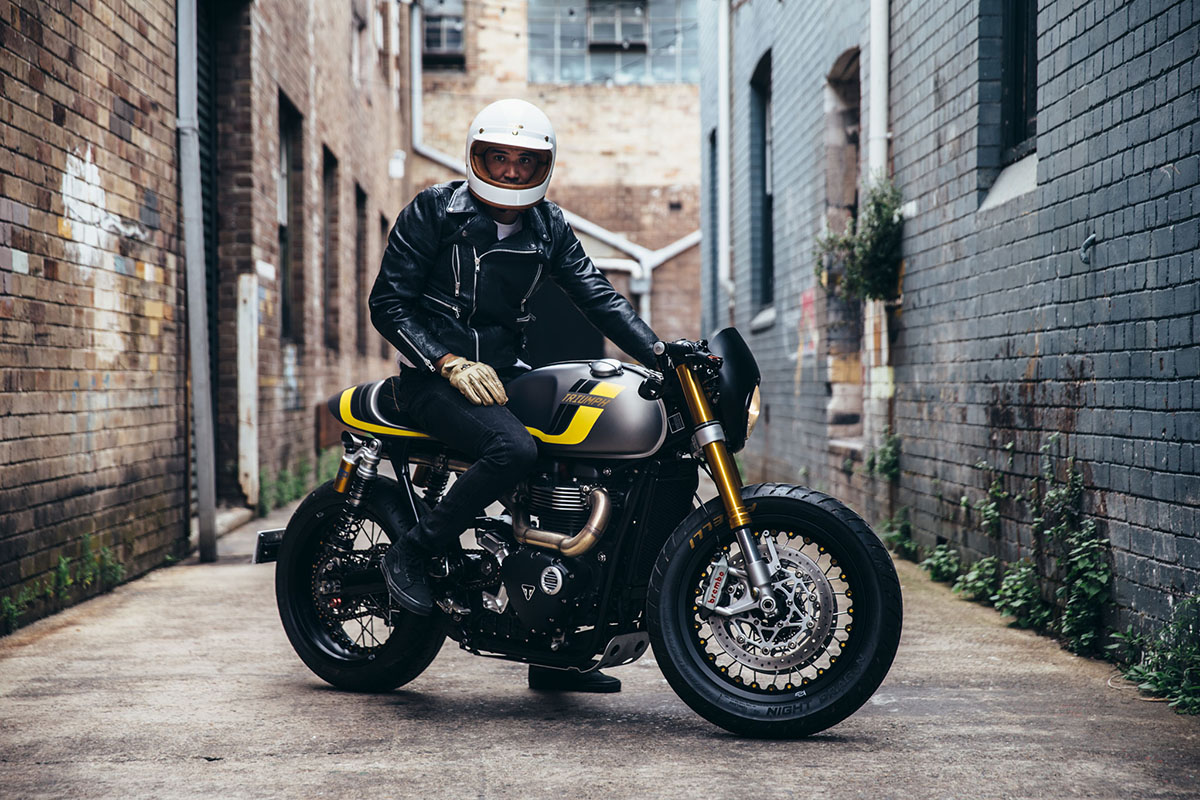