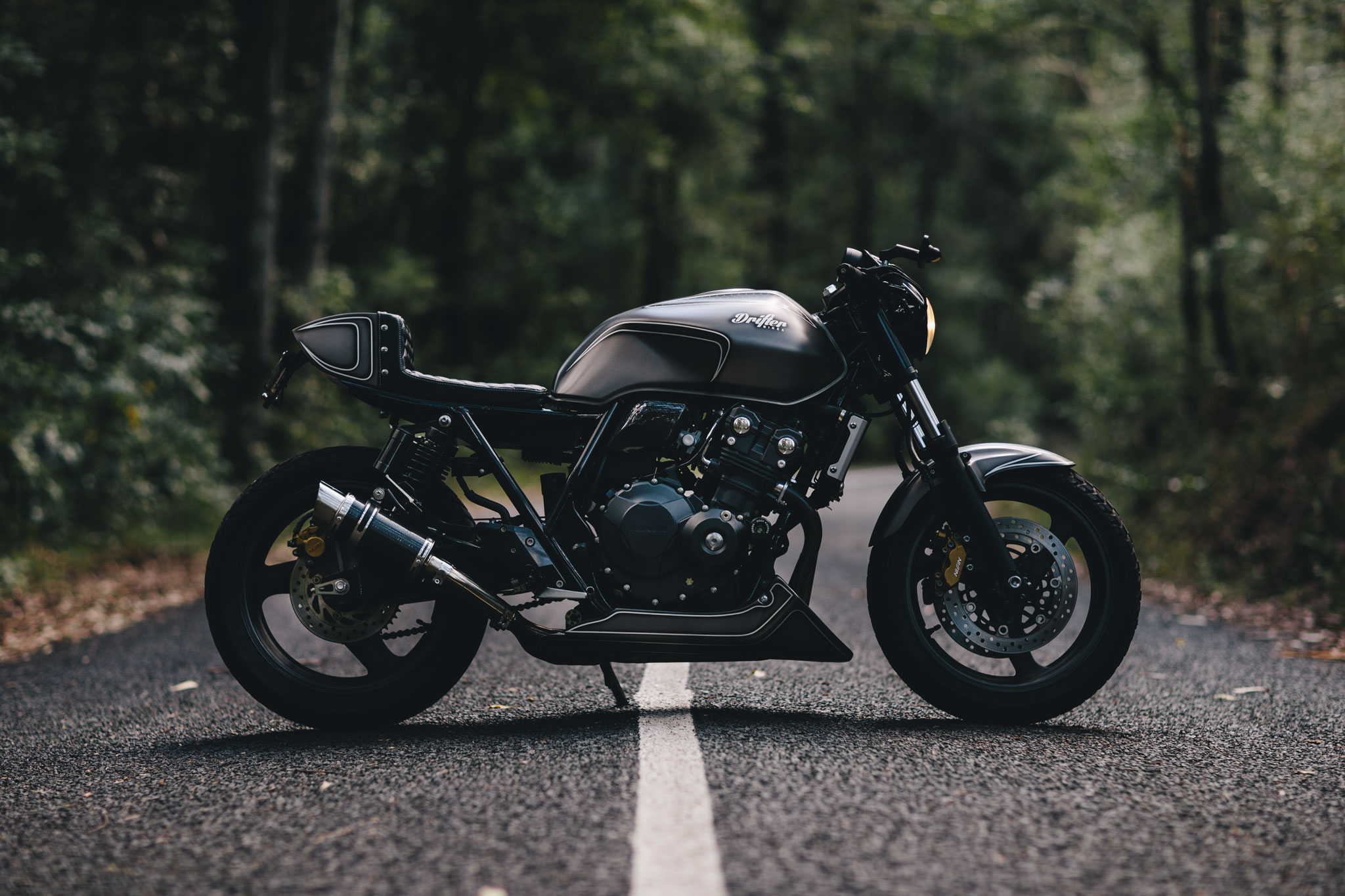 After years of paddock bashing and working his way up through just about every capacity size of bike, Simon was now on the hunt to create his dream custom machine. This would be something that needed to be dark, aggressive with a bulky stance that still looked like it’s moving even when parked. Meet the Mk II. 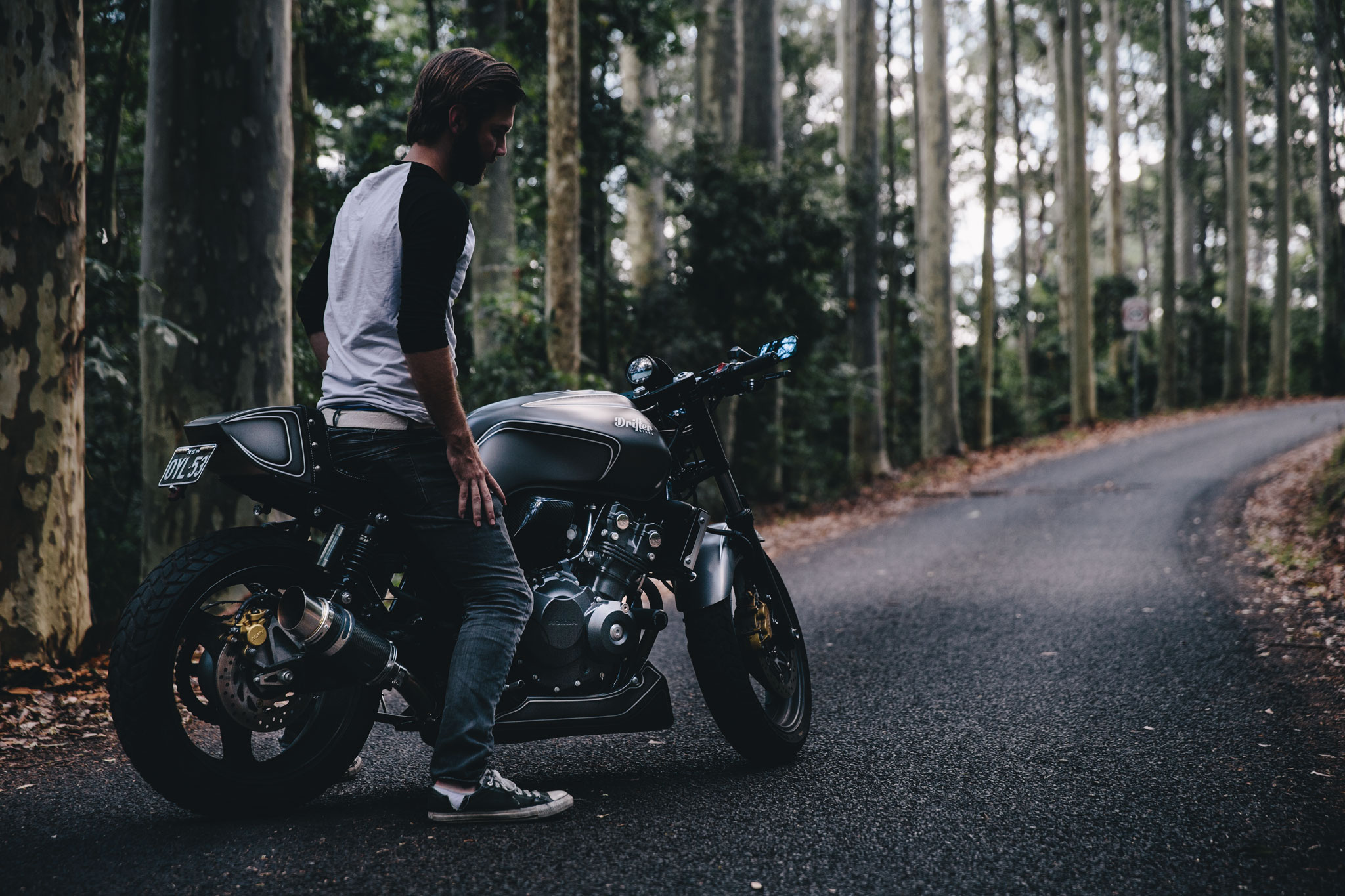 Rewind a couple of decades to when Simon was about 5 or 6, and you’d find him transfixed as he watched his father ride around on an old beat up Honda CT125 Ag bike. “All I wanted to do was have a go on it, but I was too small at the time. That’s where bikes started for me though. Dad still has that rust filled carcass of a CT to this day! Watching the likes of Mick Doohan dominate the MotoGP on his Honda had a huge impact on my need for a motorcycle, as was the case with many growing up in those days.” 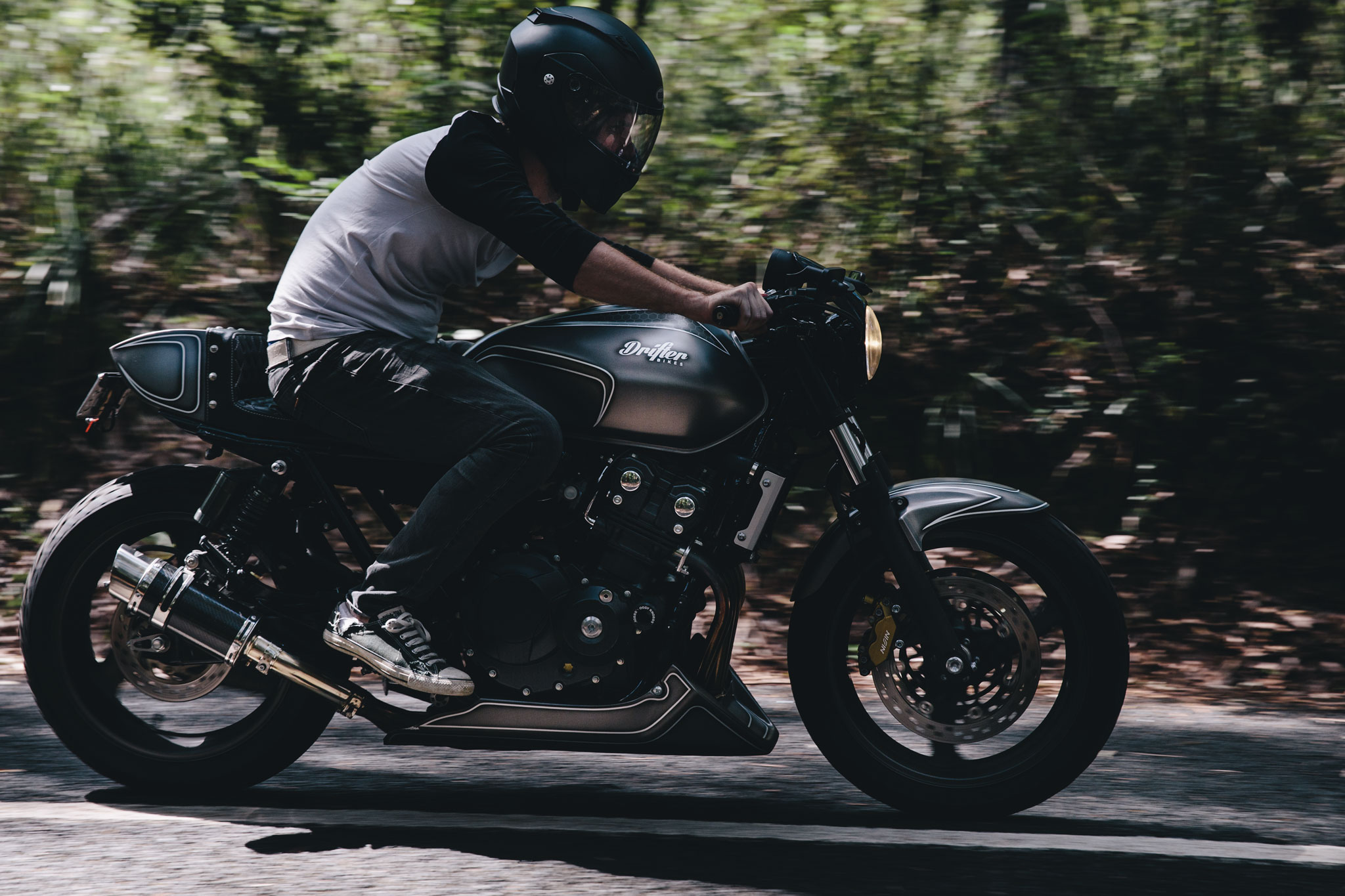 From here it would be Peewee 50’s, JR80‘s and XR100’s that would keep Simon’s love for riding full of fuel. Working his way up through these machines, the XR100 would have him hooked completely. “Being too young to drive, I just loved the freedom these bikes gave me – it didn’t matter where we were going (though mostly just bashing through paddocks and scrub) I just loved riding.” 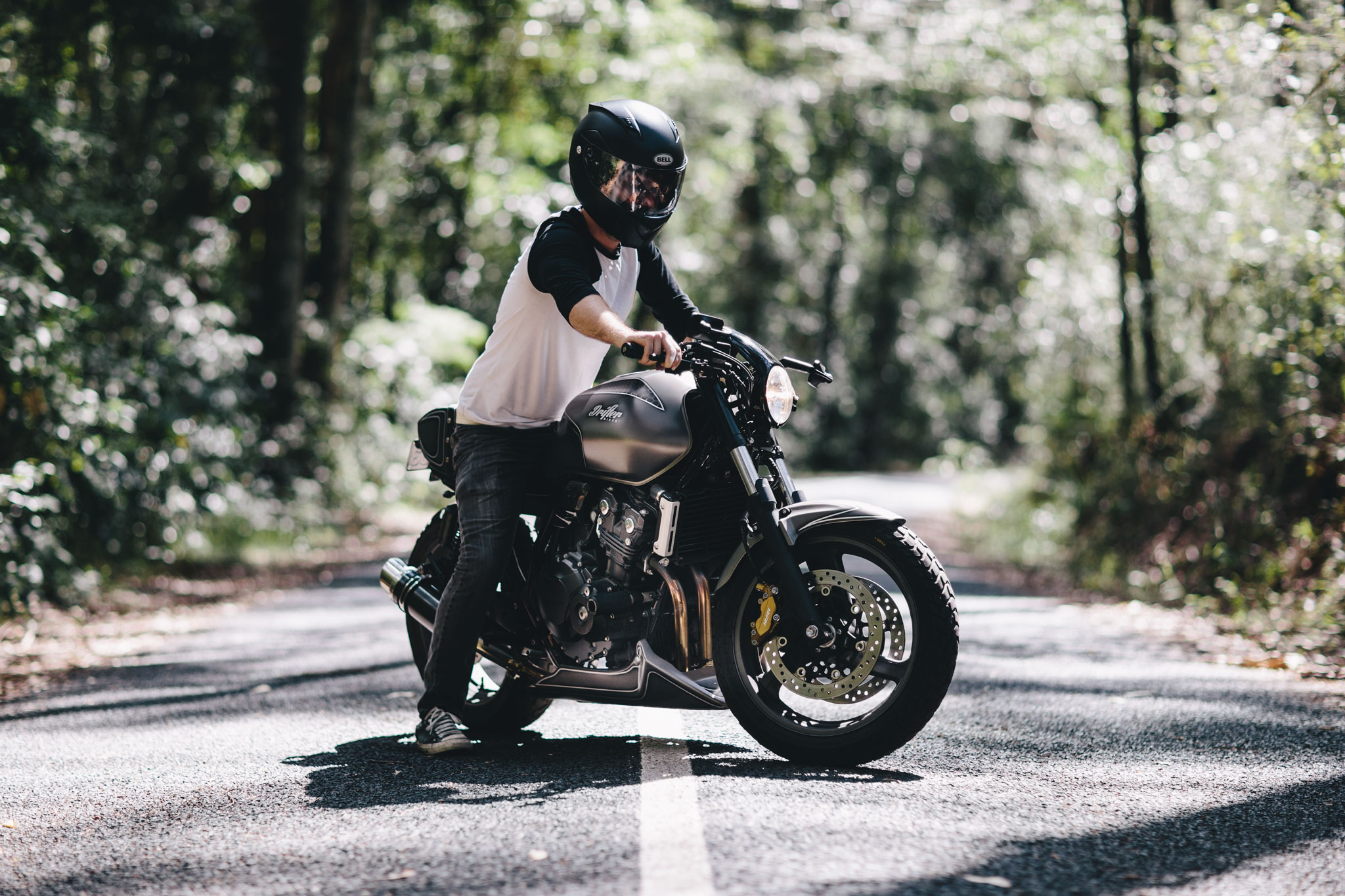 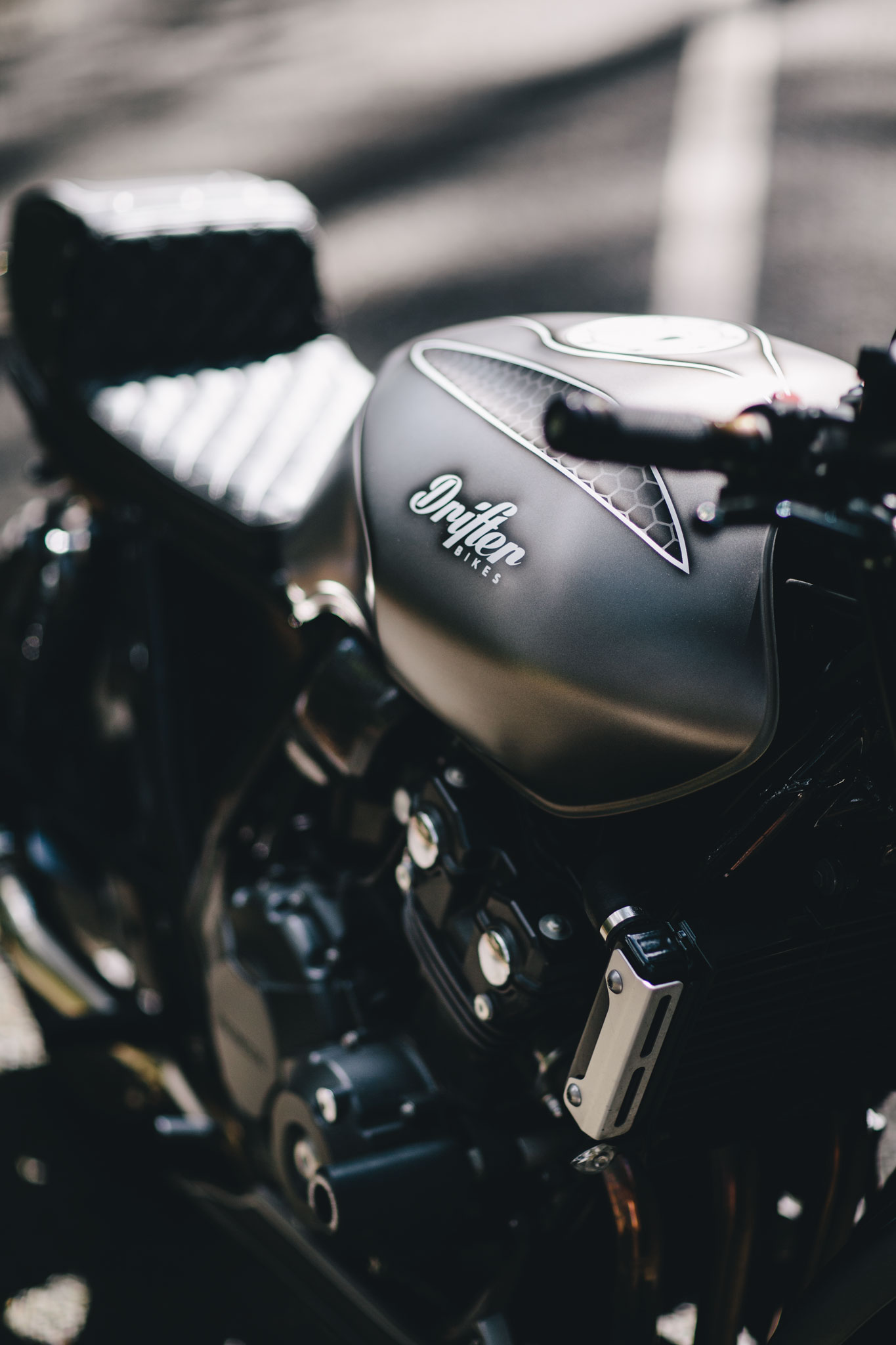 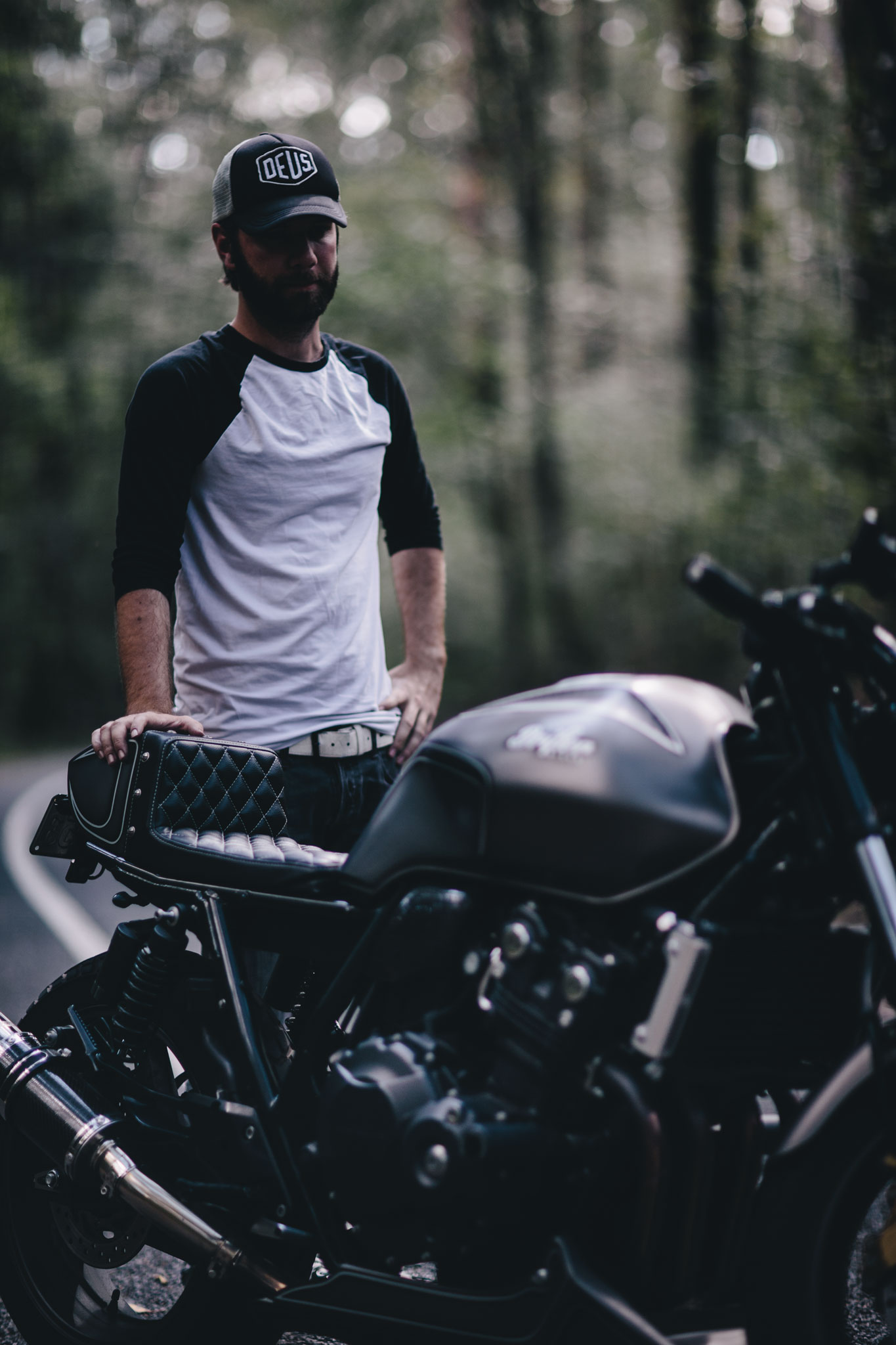 Many years later, inspiration for a new machine would be brought forth after stumbling across a build from WrenchMonkees dubbed #55. “Put simply, I just loved that bike. I followed the build though their blog and was just blown away with the finished result. The dark black and greys, with a tiny splashes of colour via the engine mounts and exhaust, and that super bulky aggressive stance at the front finished off with that tidy swept-up tail. Unfortunately, the XJR that the build was based around is too massive of a machine for me. Lucky at this point I had met Paul from Drifterbikes, and after a few conversations he suggested checking out the HondaCB400SF. Paul had just finished a build a little while before and seemed pretty confident it would be a suitable option for what I was after.” 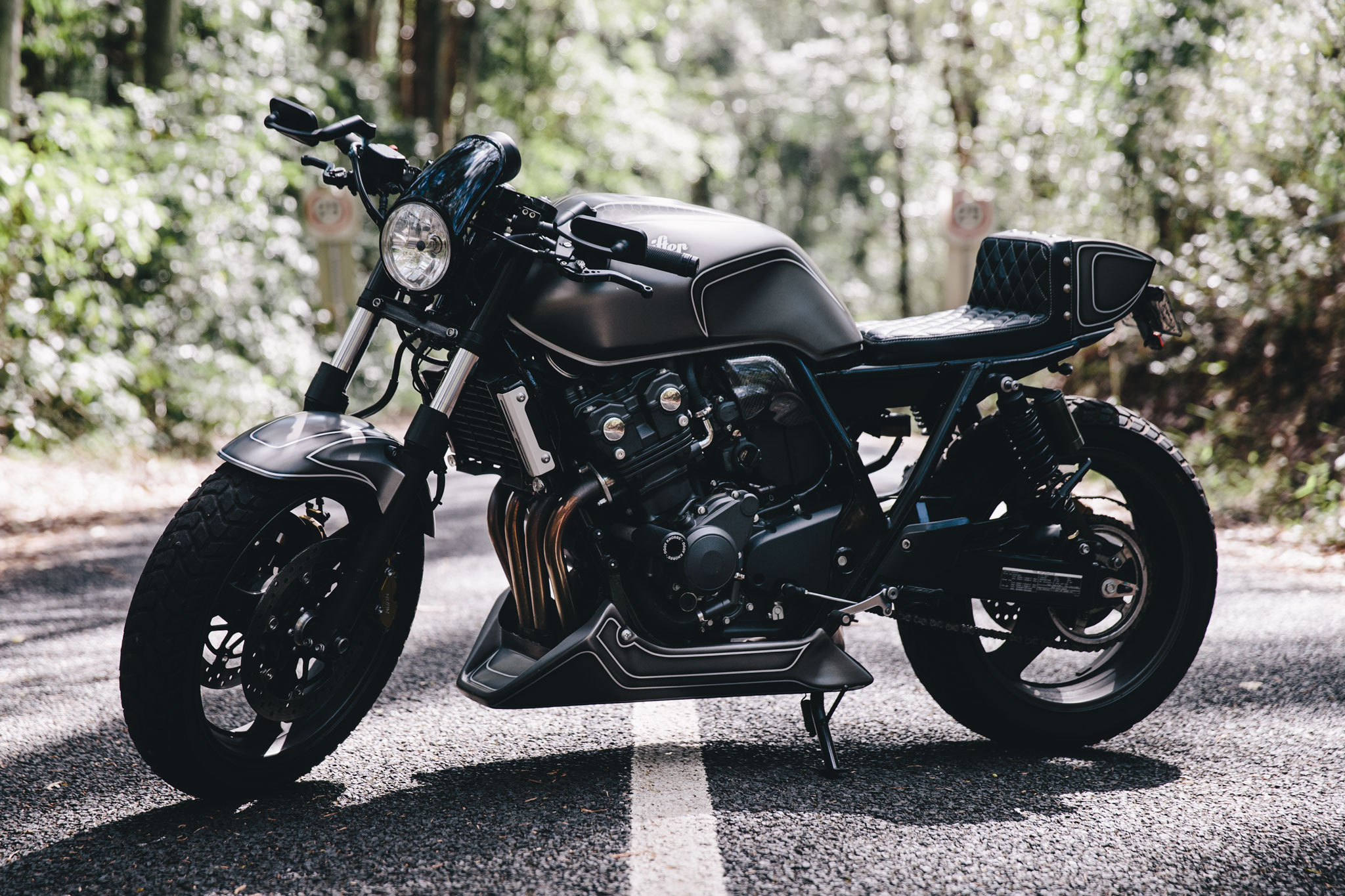 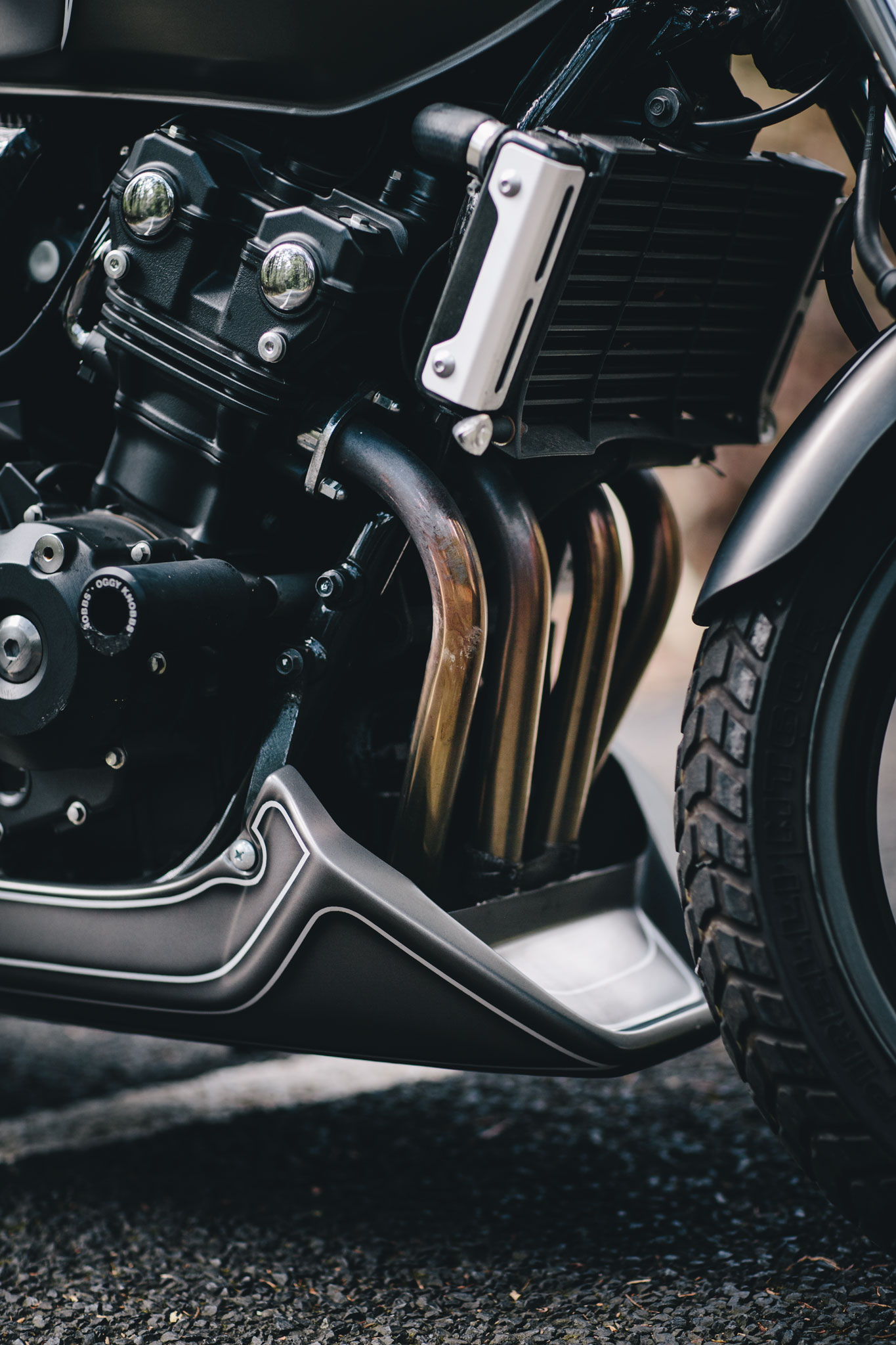 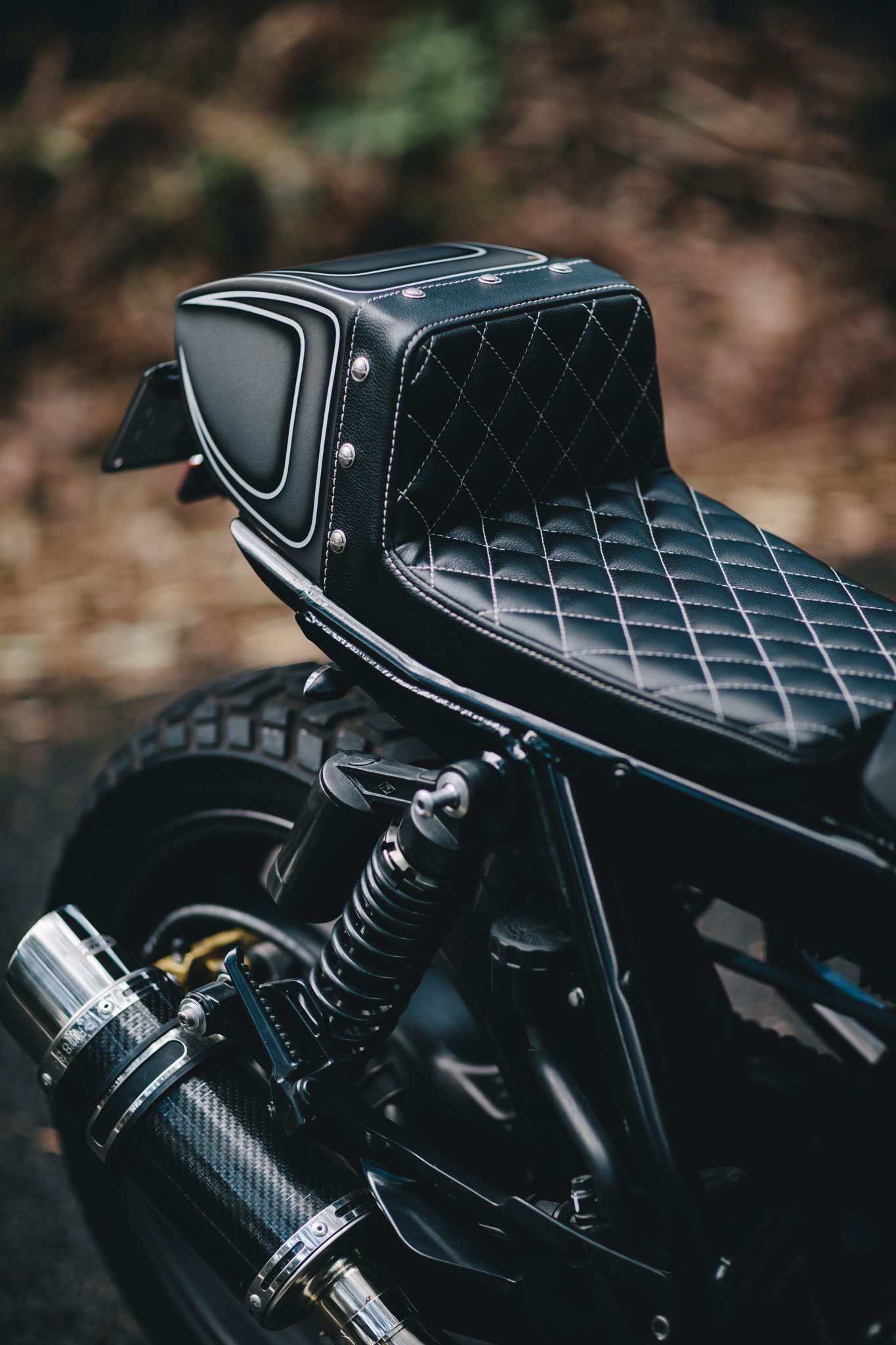 And so the donor bike would finally be picked, and staying true to Paul’s sage advice, Simon picked himself up a 2011 Honda CB400SF. Now the fun could begin. “Just finding a CB400 with grey wheels and gold brakes to fit with the scheme I had in mind was tricky, let alone with low km’s and the price I wanted. But after about 4 months or so of patience I found one, and not too long after that work was able to begin. Definitely one of the most annoying parts of this build would prove to be the seat. Trying to find a pre-fabbed one made of steel to save on time was not at all easy. Eventually I found one in India, although when it finally arrived it was awful. It wasn’t symmetrical in any way, shape, or form. It was too narrow for the frame, twisted, poorly welded and almost ended up being chucked in the bin. Luckily for me a bulk amount of work was put in by Paul to get it looking and fitting correctly.” 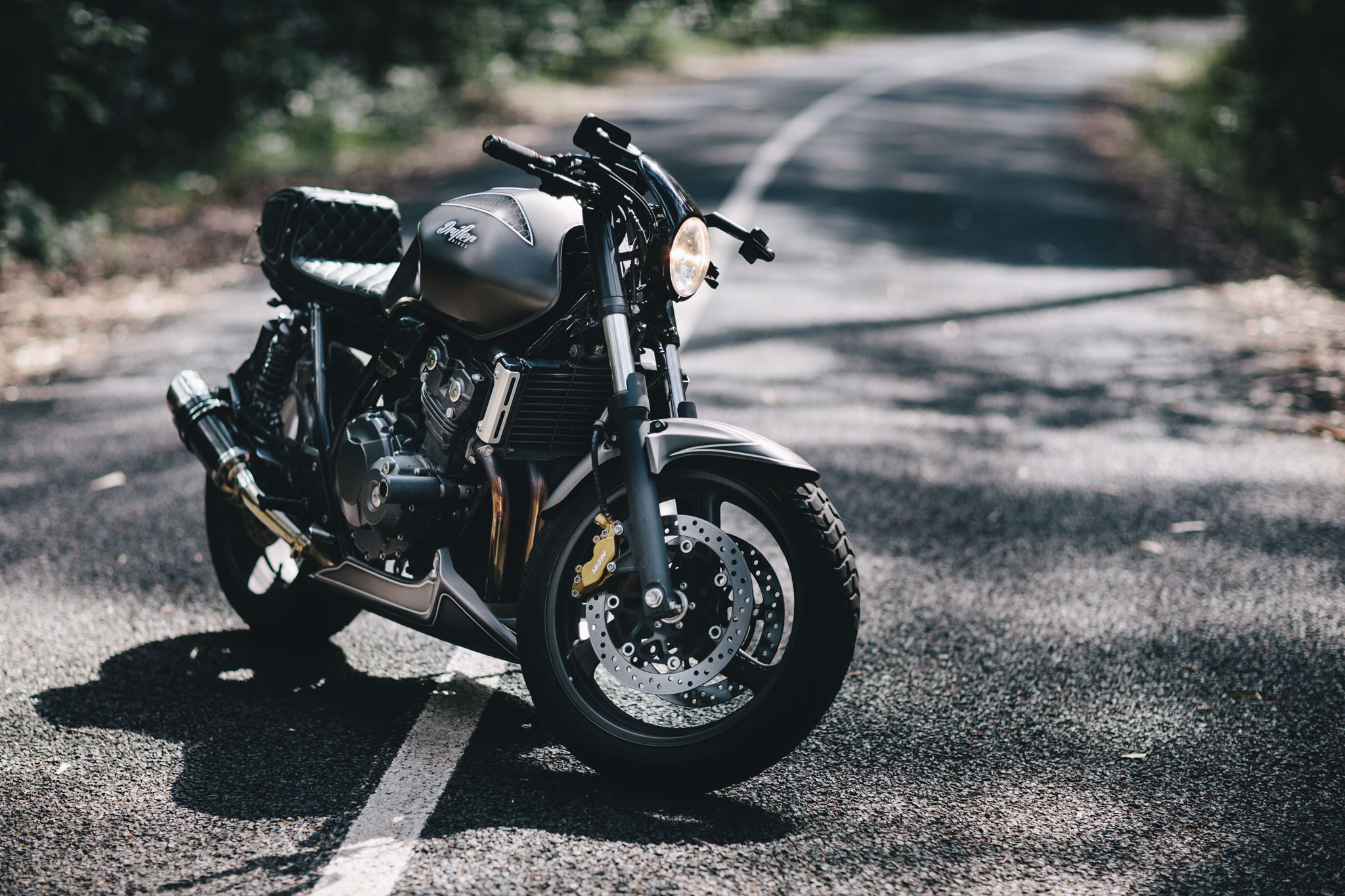 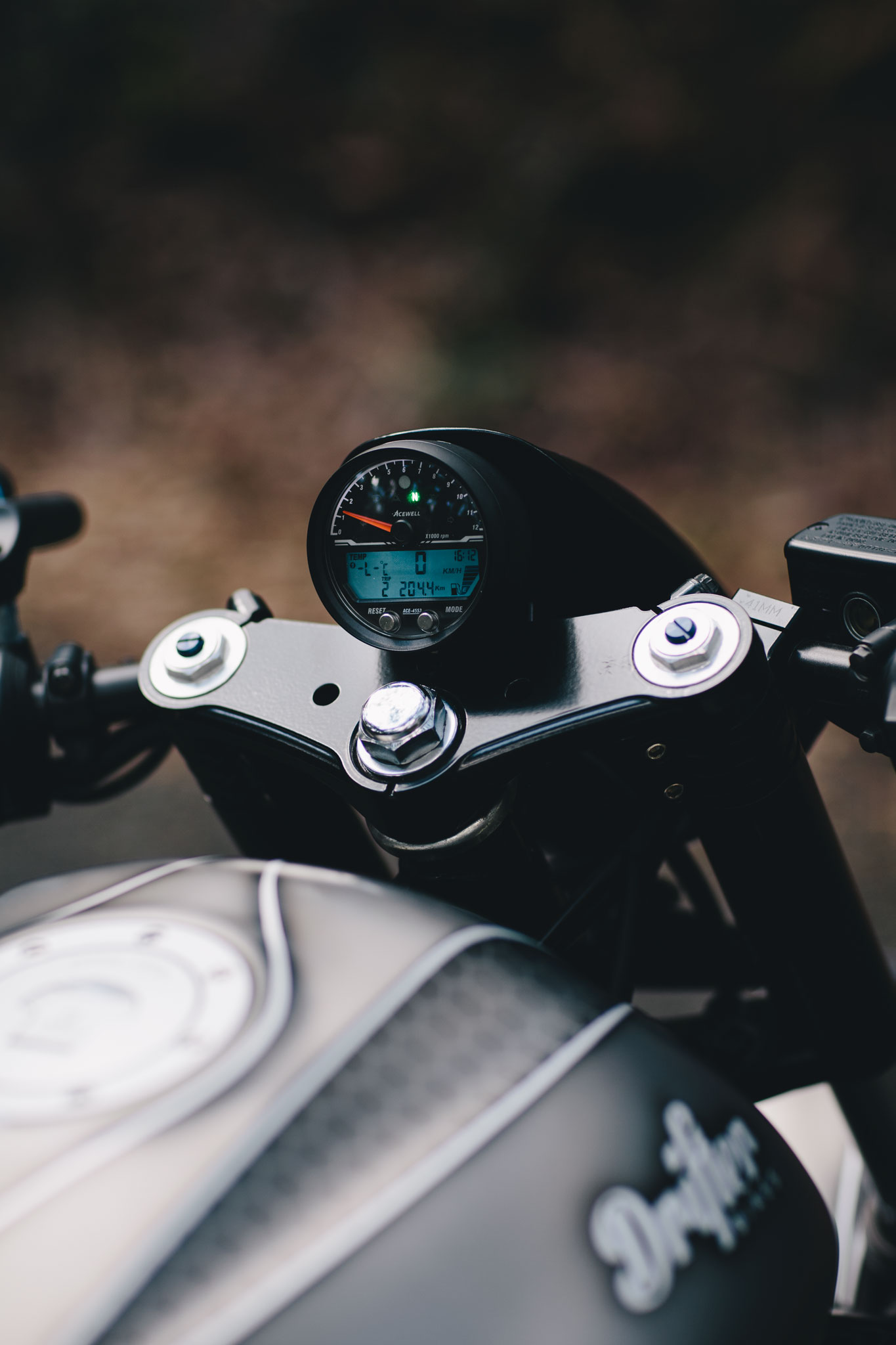 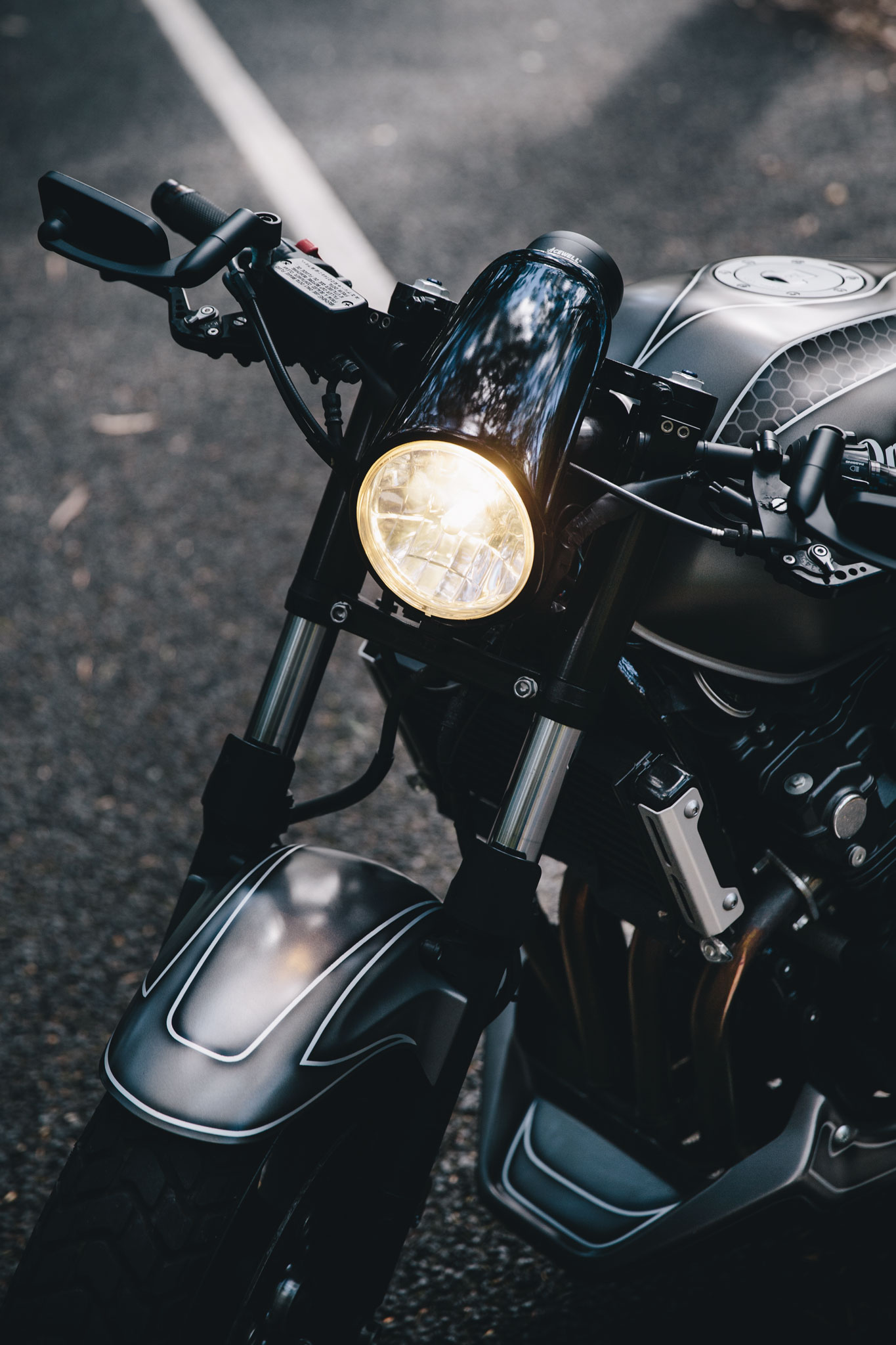 – Ignition relocation for a clean top tree and hidden for looks.

-Paint by Kyle from Smith Concepts. Grey Matt finish for that kinda flat industrial look. Minimal but high-end custom paint to every panel on the bike.

– Subframe reshaped and shortened to match the new remade race seat cowl.
-Mt60 corsair tyres give the bike a tough stance but are designed for Motard race and give exceptional grip on road given their aggressive looks. 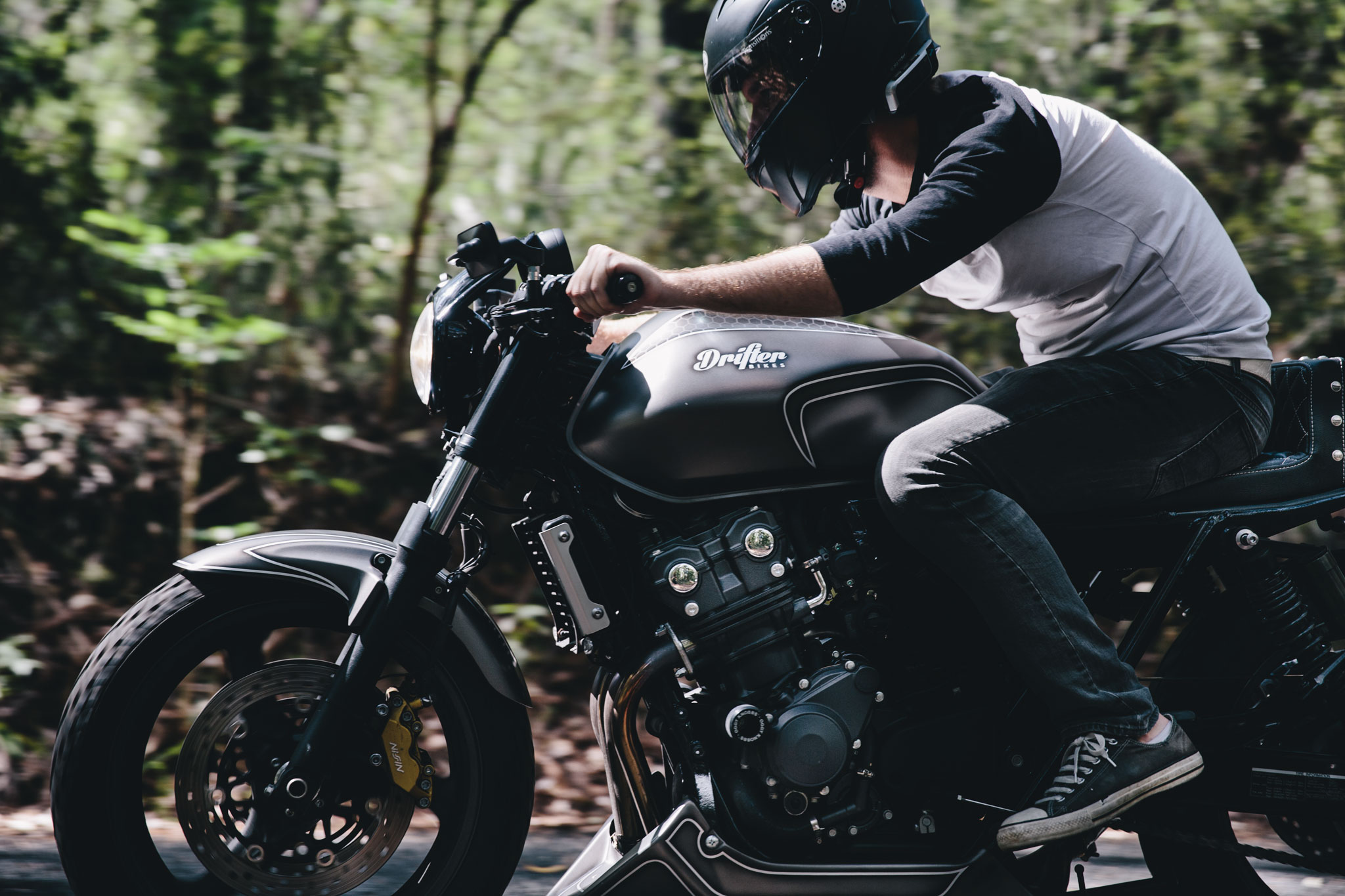 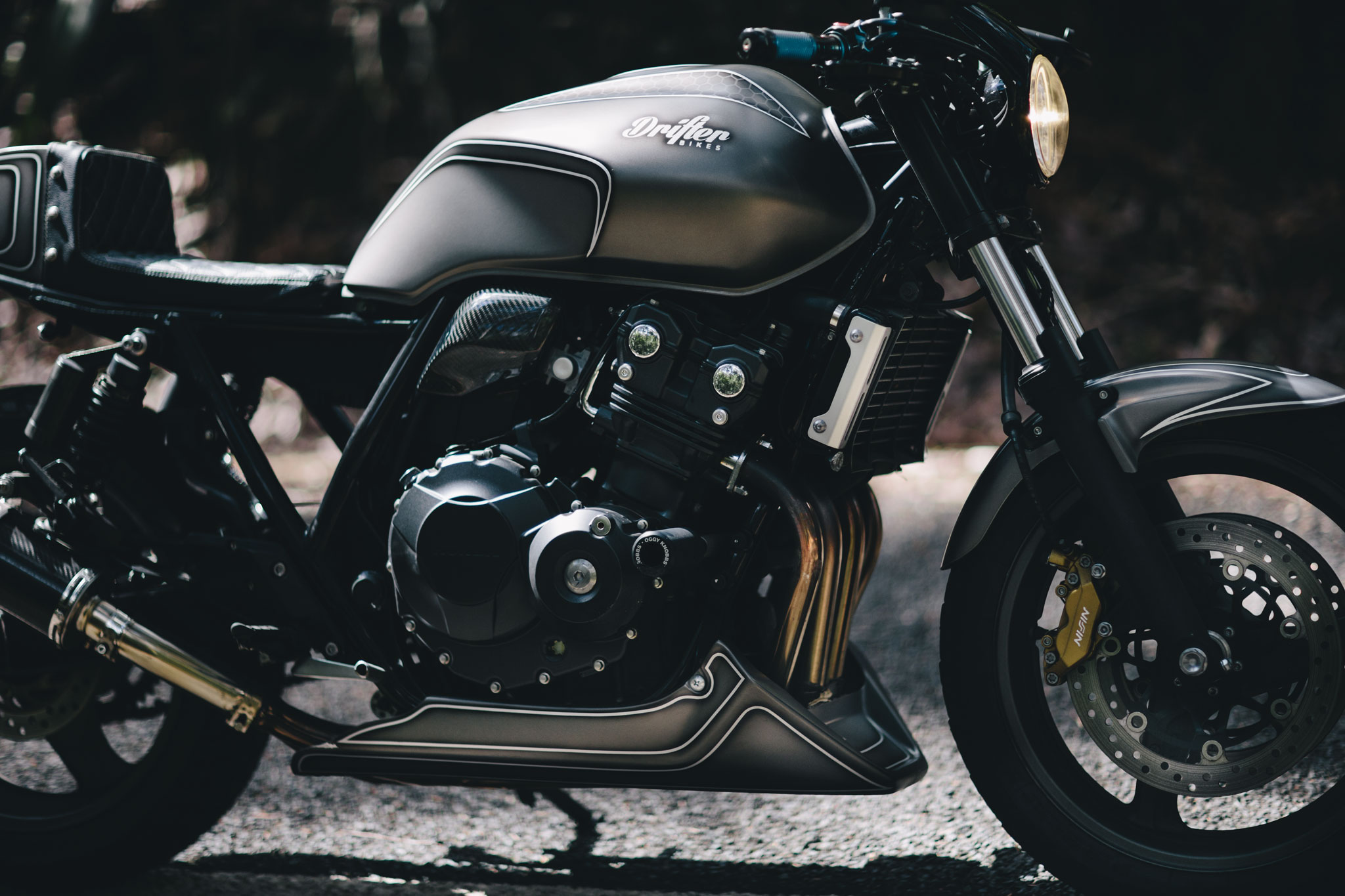