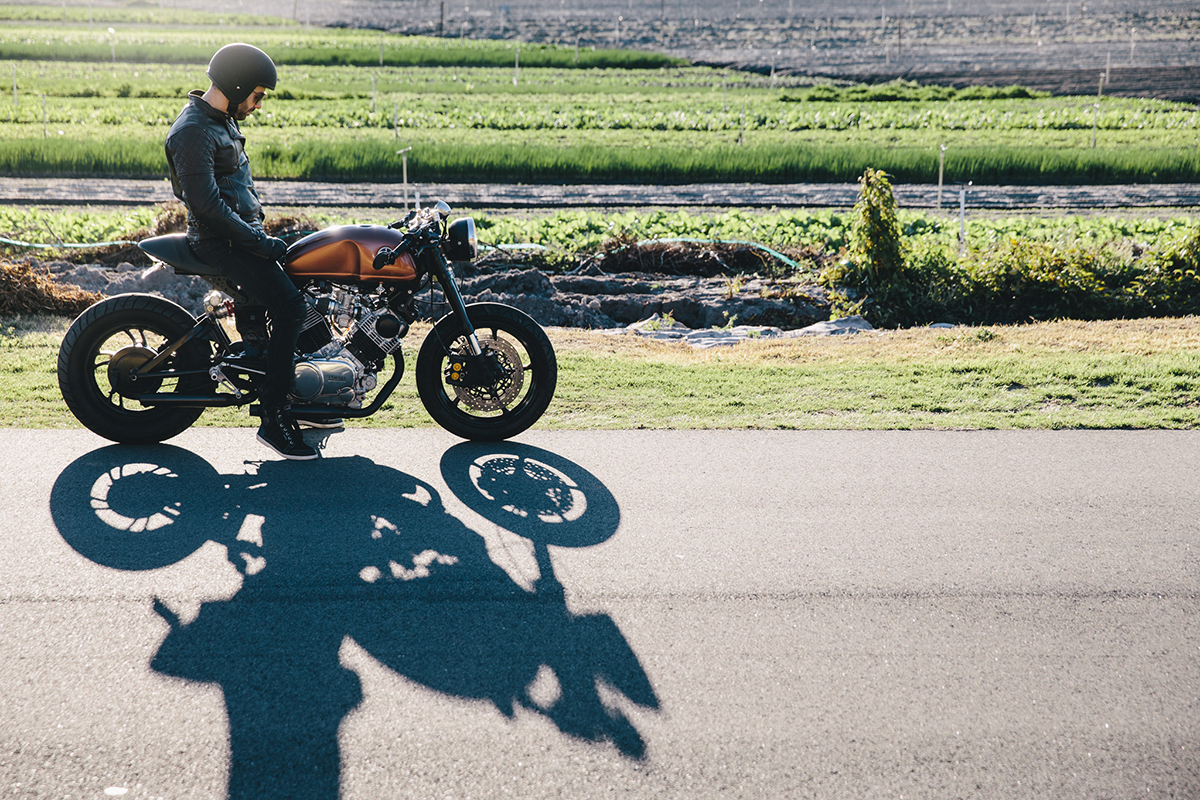 There’s no mistaking the V-Twin sound that thunders out from this machine, though this XV1000 is a far stretch from its stock cruiser beginnings as it’s shed its skin for a much more nimble and refined look. 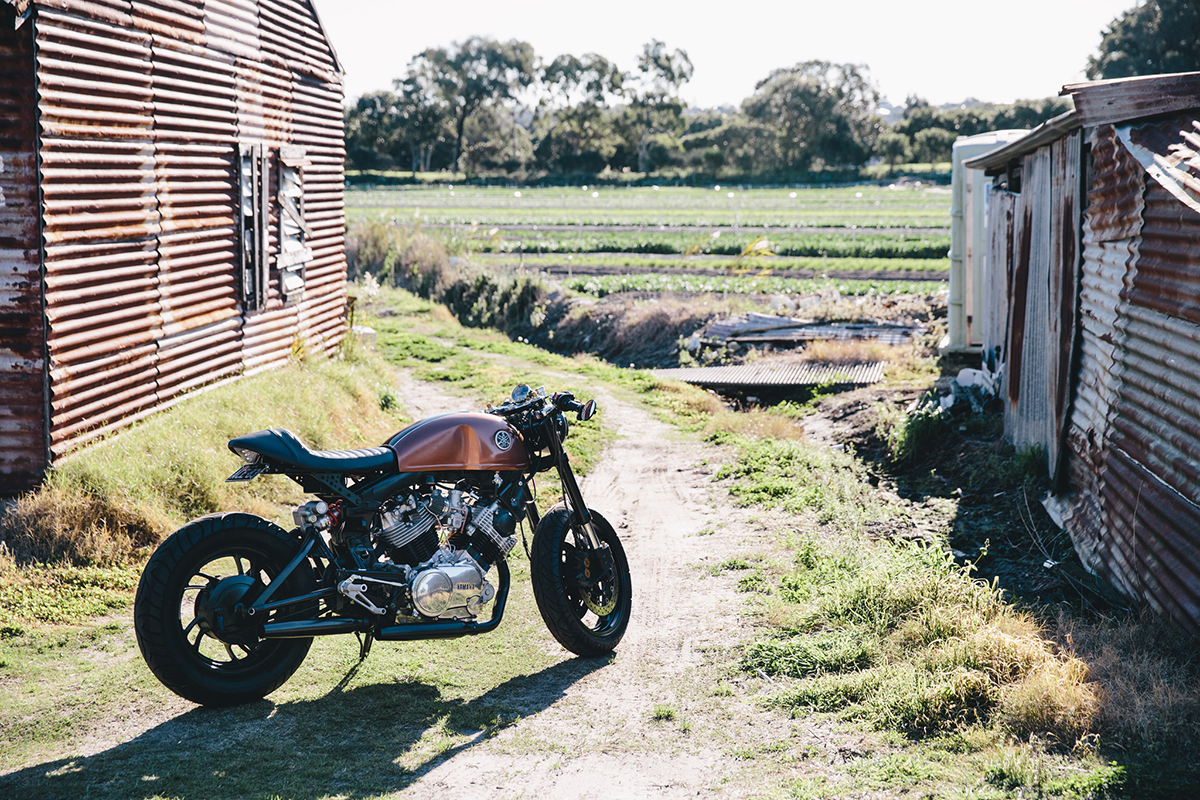 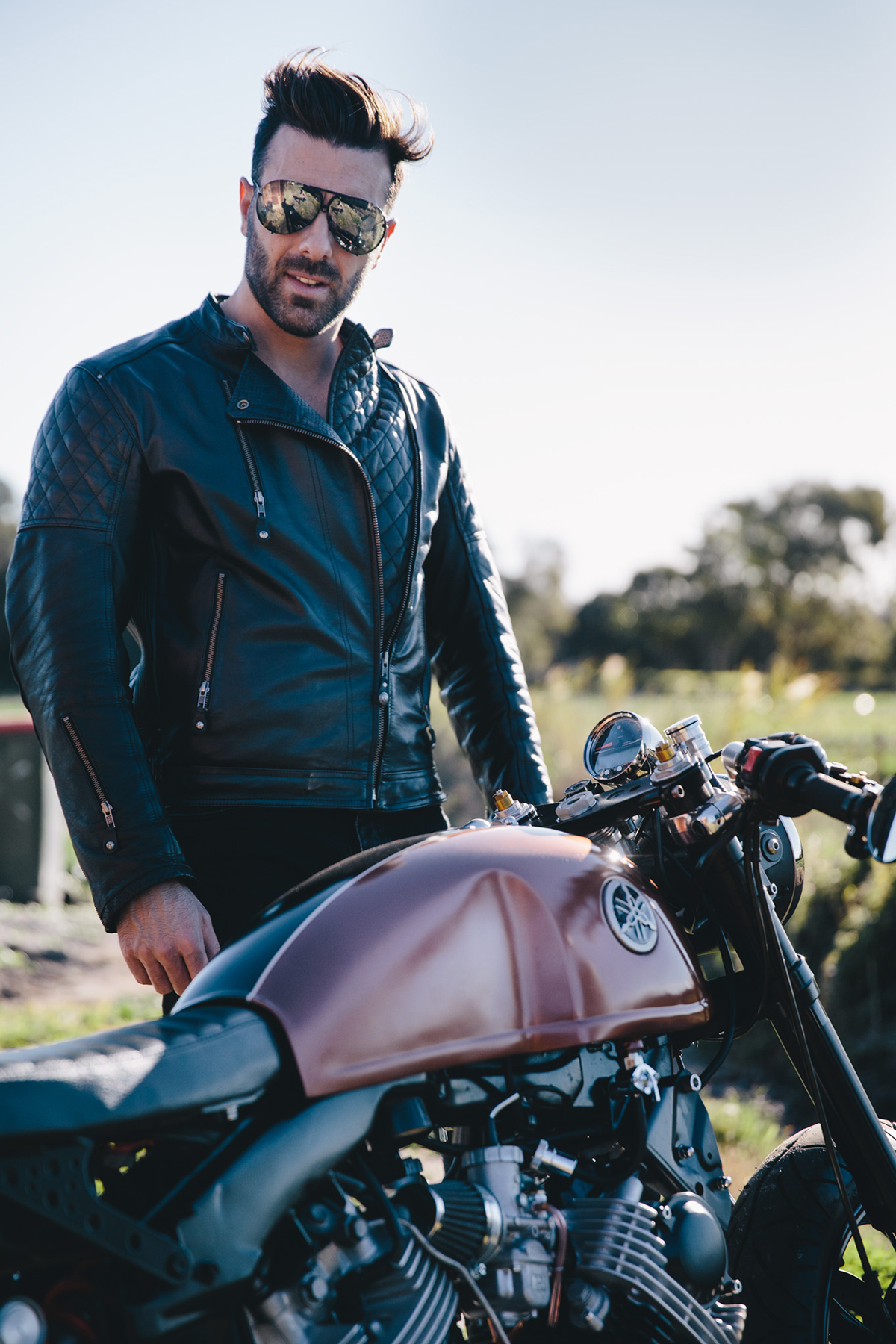 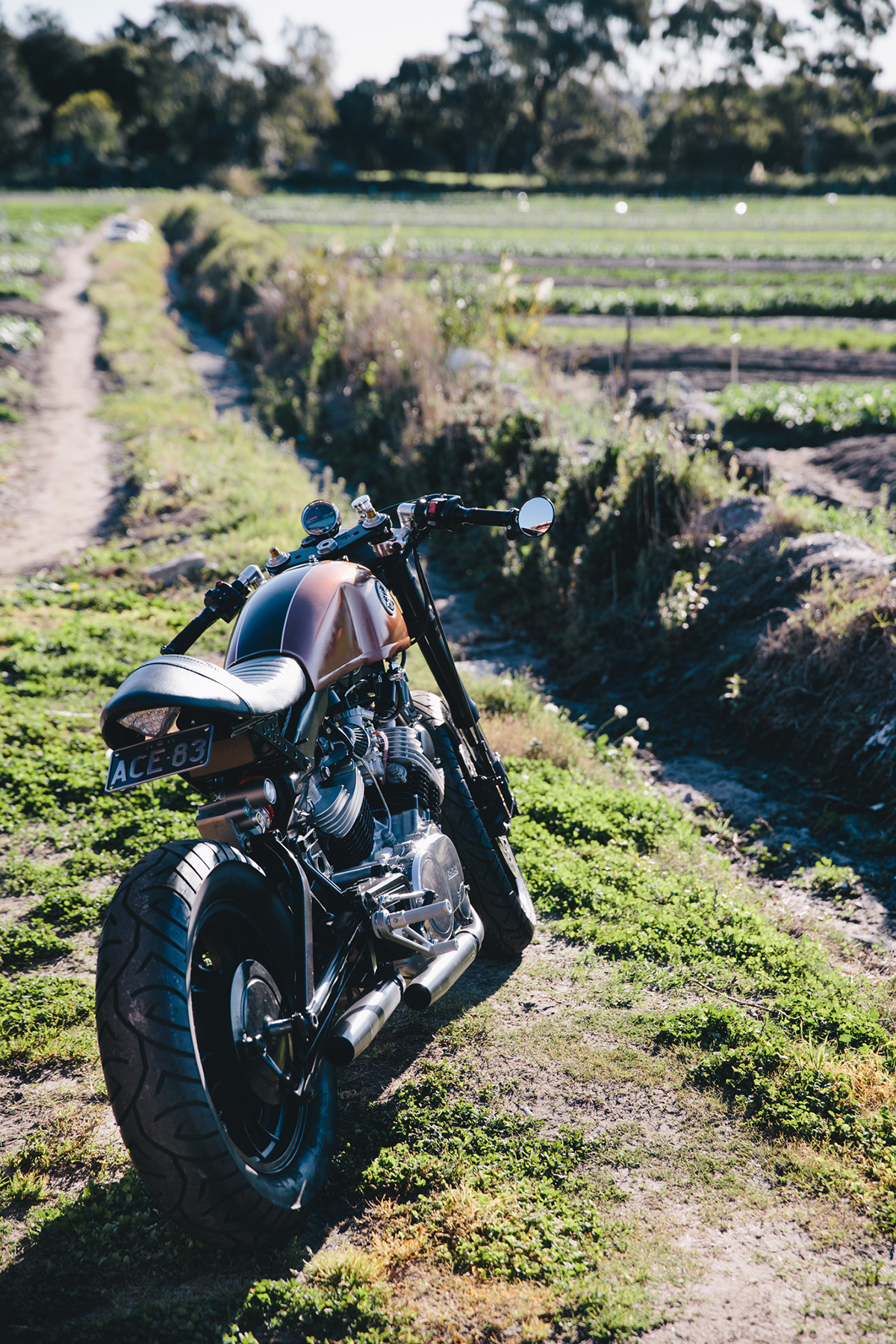 After 14 years of riding a wide variety of bikes, Adriano was on the look for a machine that filled the café racer aesthetic while mixing in a bit more muscle and a tougher look. After coming across Greg Hageman’s Yamaha XV builds, he knew exactly what he needed to do. “As soon as I saw one of Greg’s XV750 builds I knew I wanted that bike! I started to research everywhere on what went on with the build, and learned as much as I could about the XV series of bikes. Yamaha brought out the XV’s with a single mono shock between 1980-1983, so getting a blank canvas between these 3 years was a mission in itself – but persistence was key.” And the persistence paid off, coming across a stock 1982 XV1000 that would provide the basis for this build, with a bit more grunt than the 750cc model. 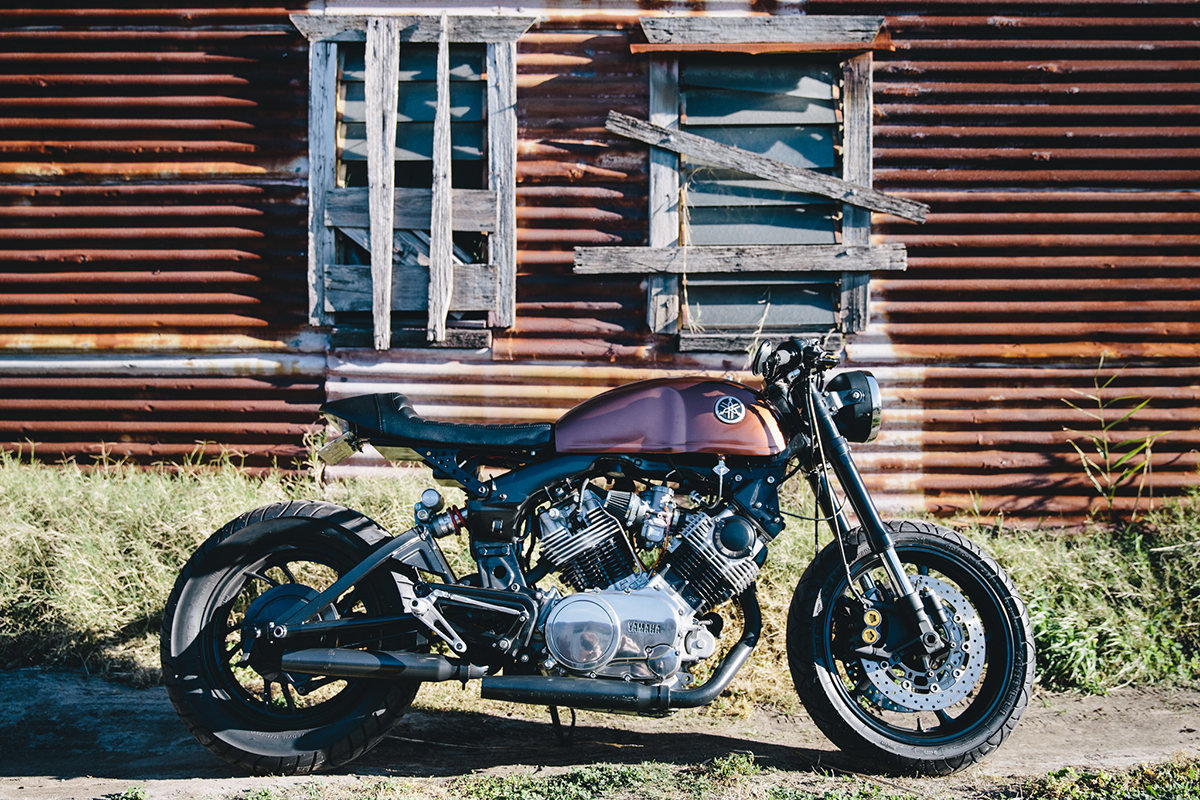 Enlisting the help of Dave Marik from Archer Motorcycles (Now the site of Sol Invictus) the work on this cruiser turn café racer would begin. “A lot of late nights, plenty of beers, and a ton of rock music went into creating this machine. Dave really poured a lot of heart, soul, and hard work into the bike, and the results are a testament to his work. Every single nut, bolt and piece was stripped back to bare metal. I’m Italian, and I’d compare this to building the Colosseum – a work of art! Rome wasn’t built in a day, that’s for sure. The whole frame was sand blasted and powder coated. Every single part of the engine was pulled apart and the external parts were ceramic coated.” 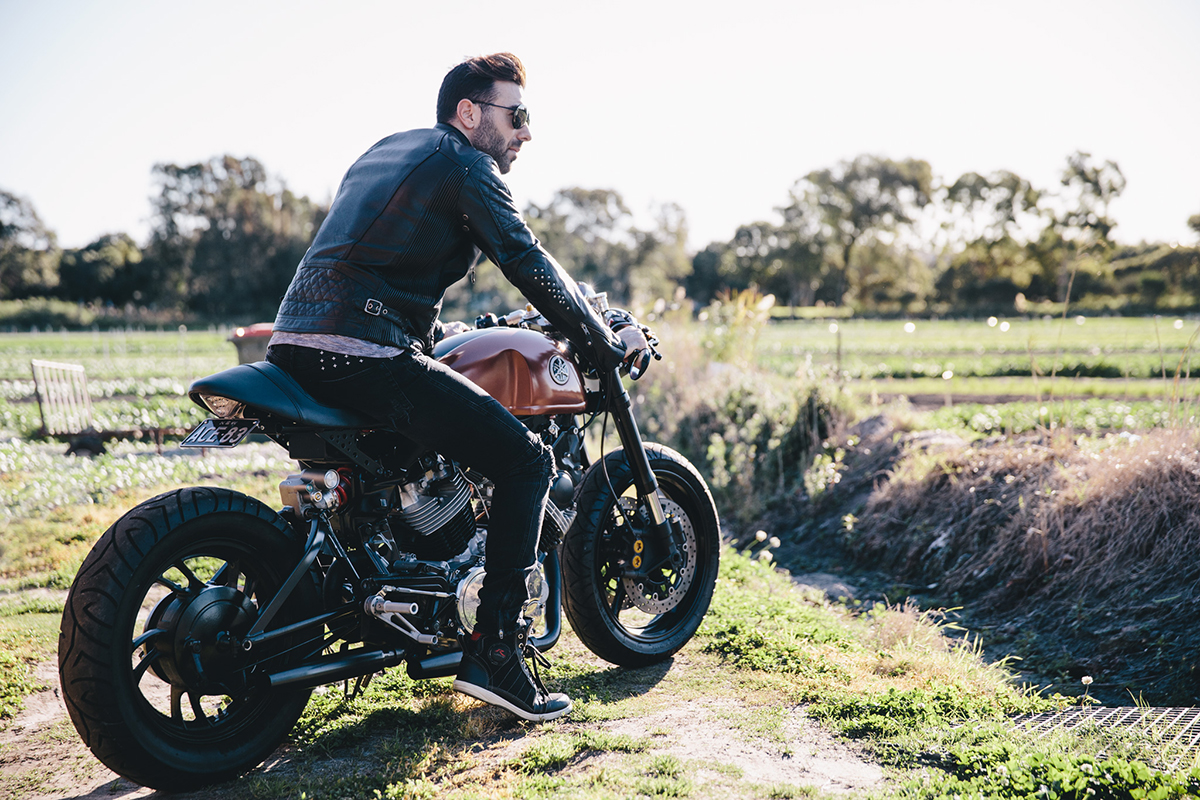 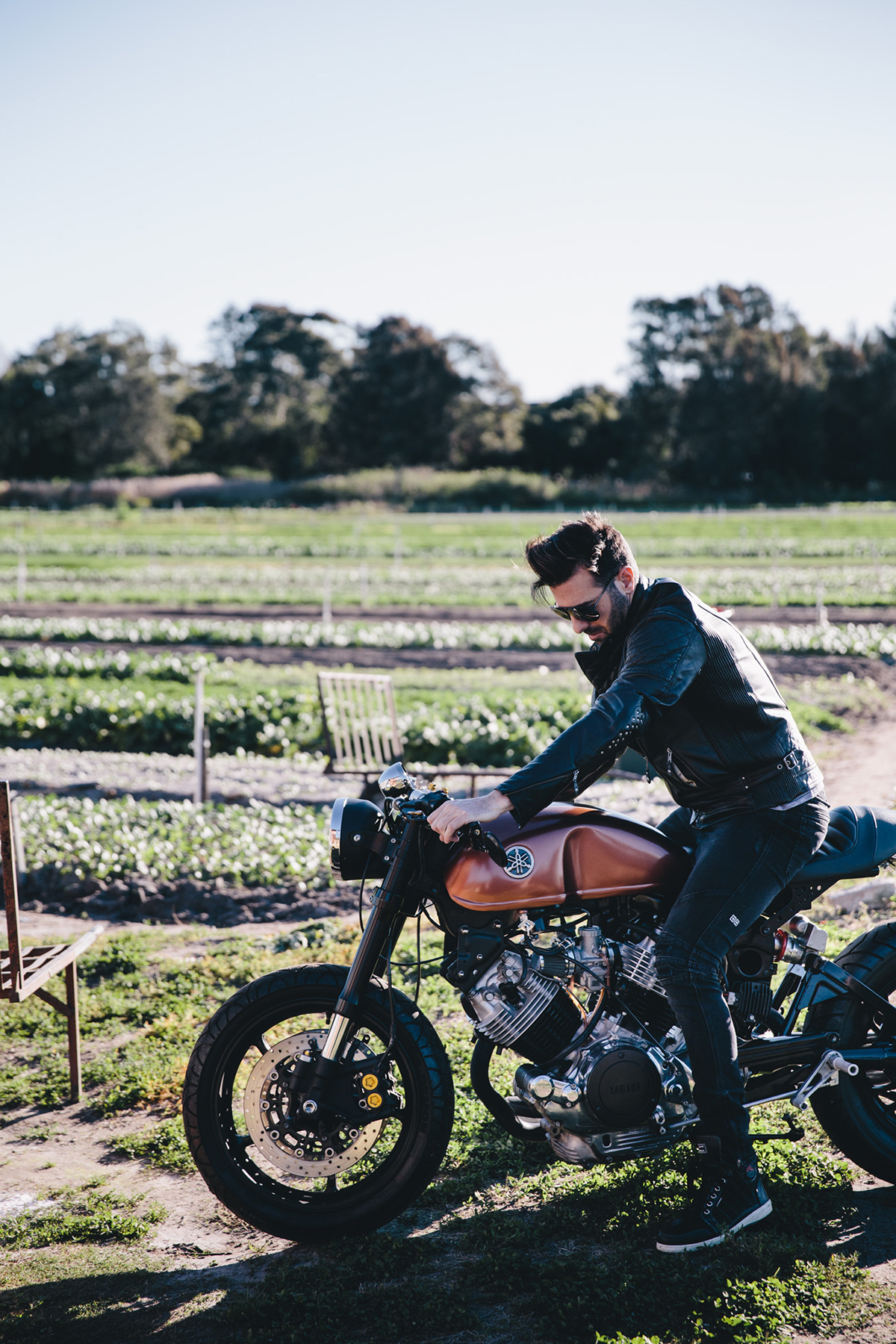 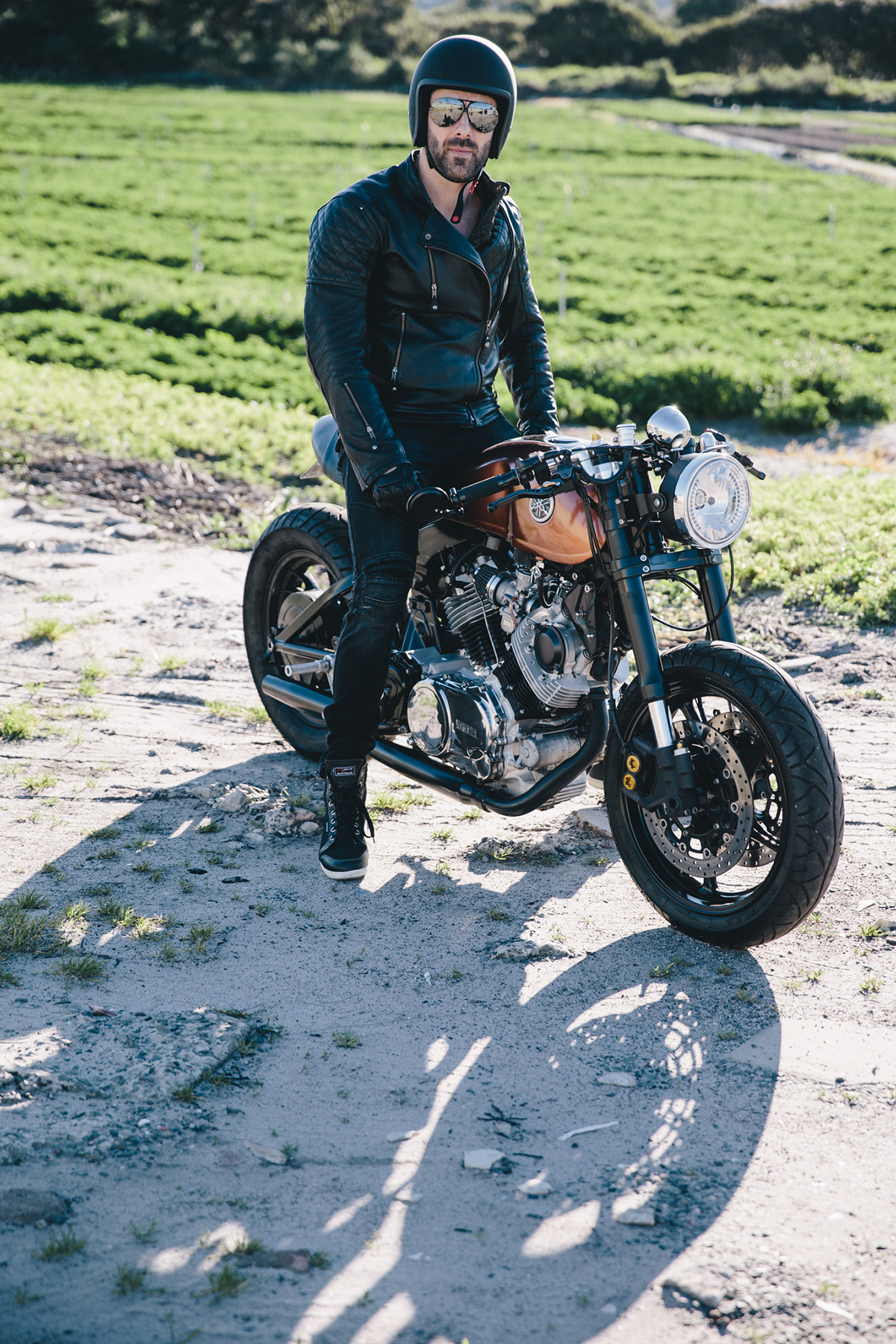 To make this bike perform as good as it would look, it was given an injection of quality parts across the board. The front end of a Yamaha R6 was transplanted onto the XV, along with an R6 rear shock. Some finer touches were added with a pair of Tarozzi rear sets, Tomaseli clip-ons and an Acewell speedo. The copper burnt orange tank is off a 1965 Benelli, an addition that is being seen on XV’s across the globe – and for obvious reasons as it compliments the V-Twin café racer look perfectly. 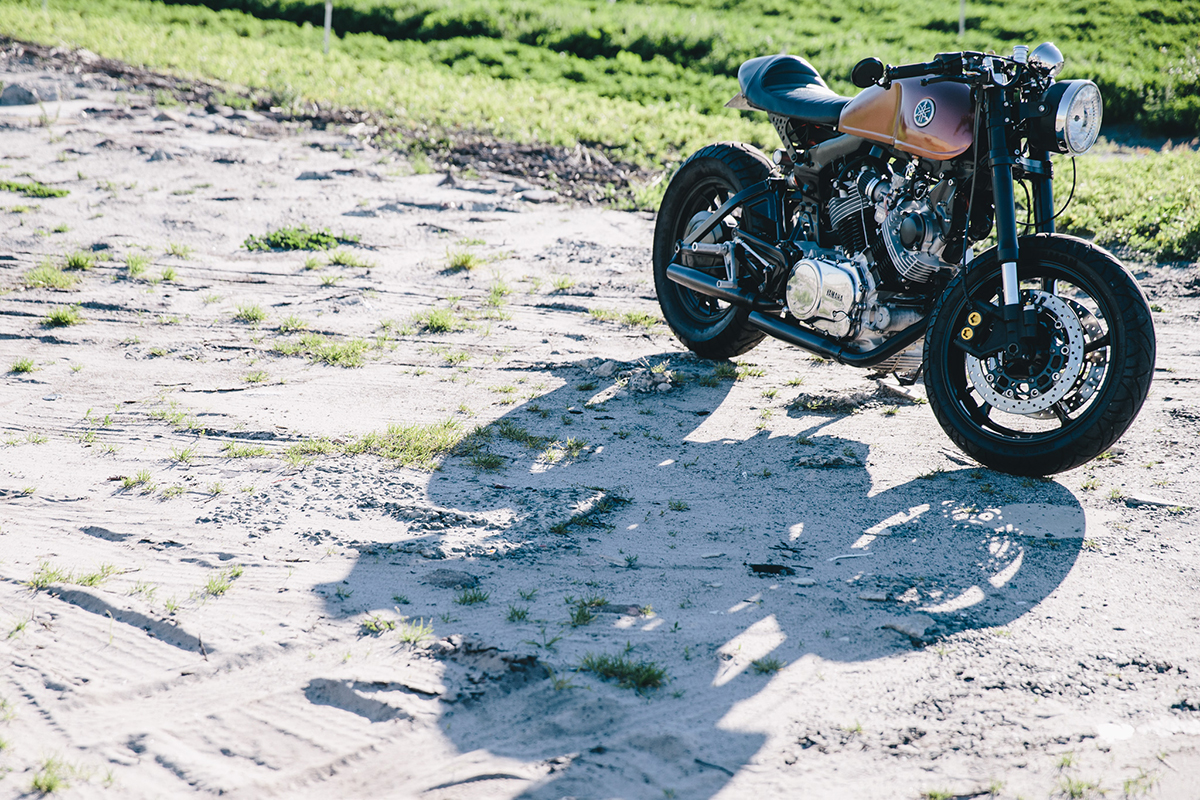 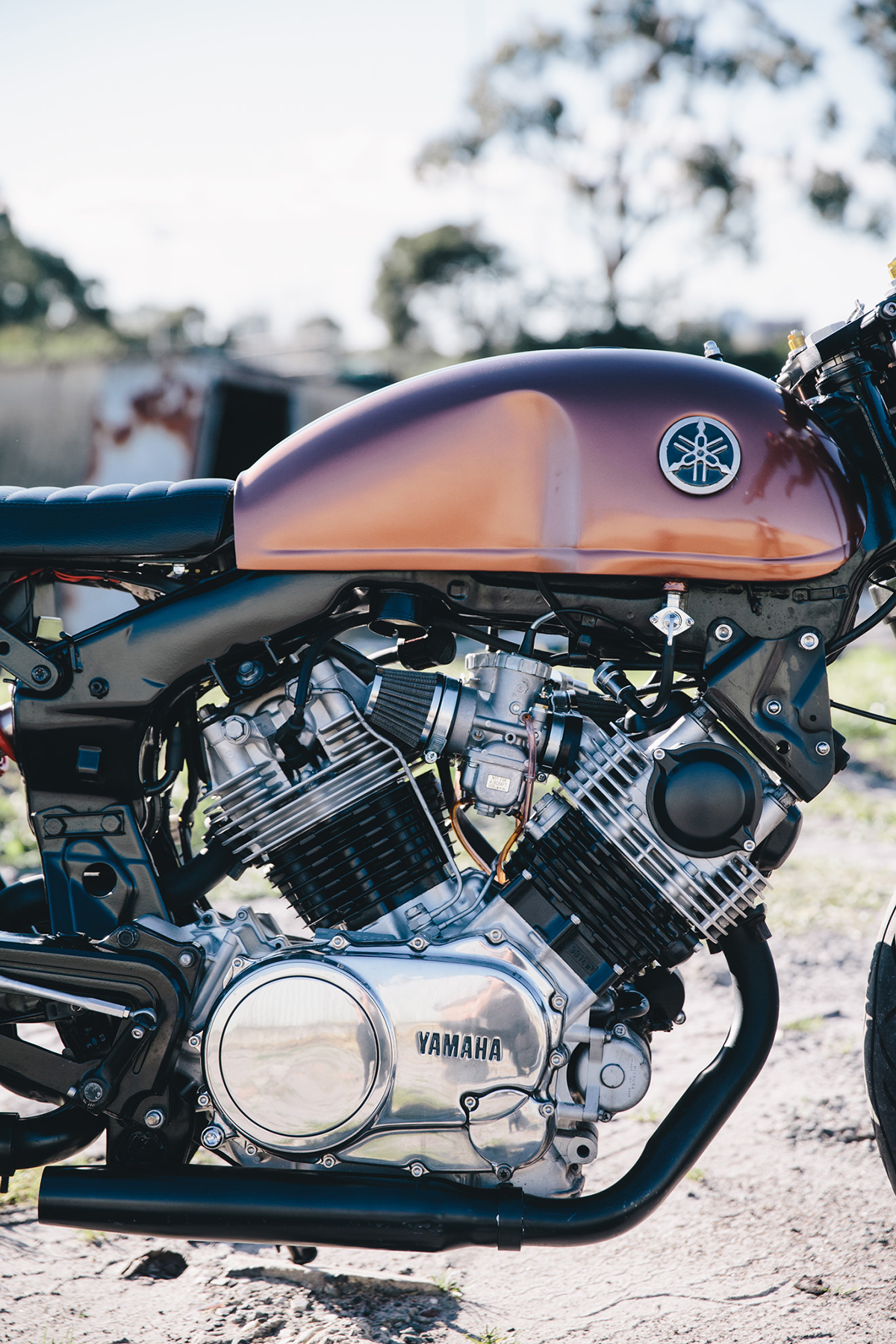 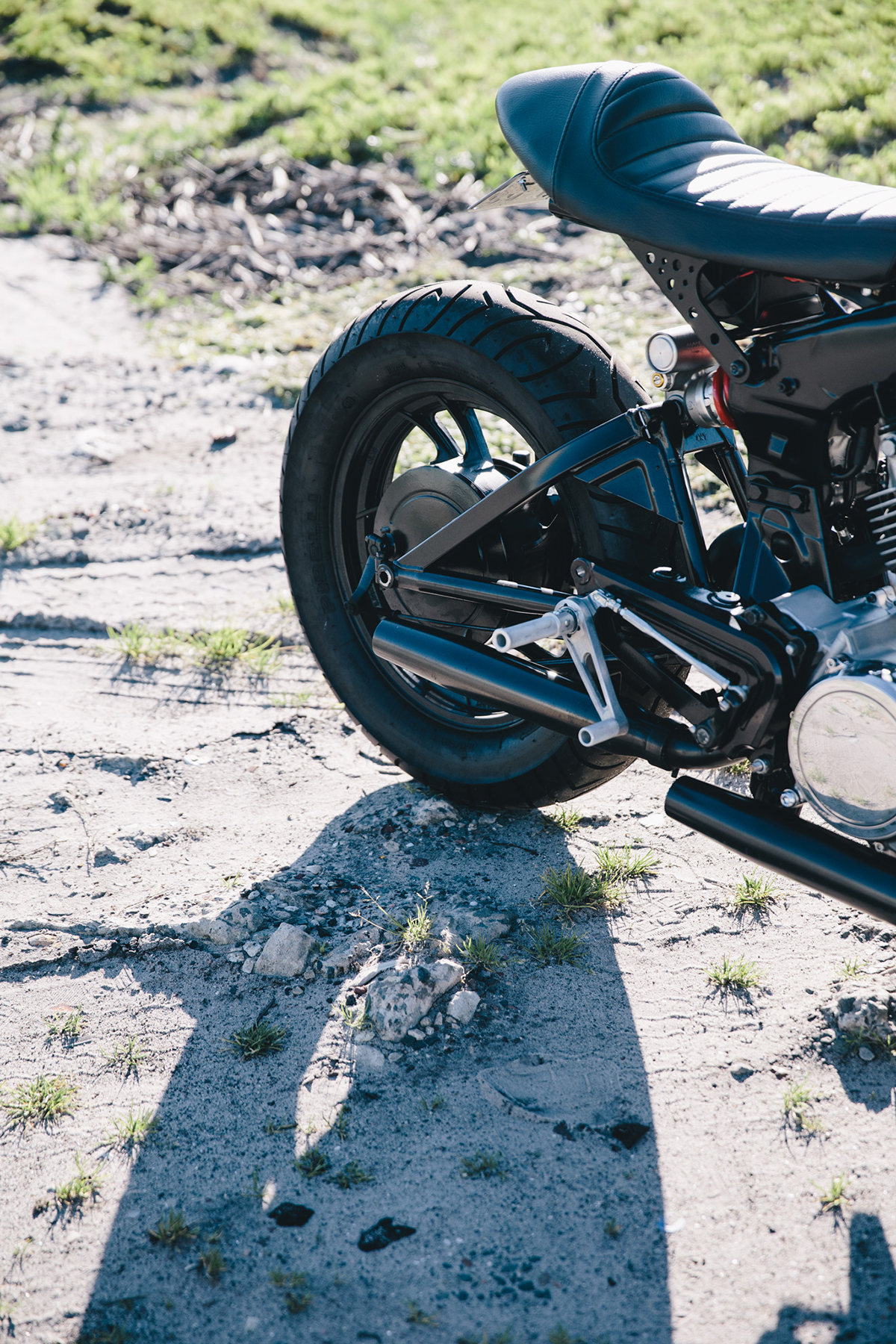 “The carbies have been tuned to the sound of Mikuni. Please note. they are not for aircraft use*. The iconic Yamaha tuning fork badges were moulded and cast out of raw aluminium by Andrew Simpson, who has been creating bespoke parts for many custom builds. At the end of it all, a lot of arguments were had and stronger relationships were built within the workshop. Nothing a beer or two wouldn’t fix!” 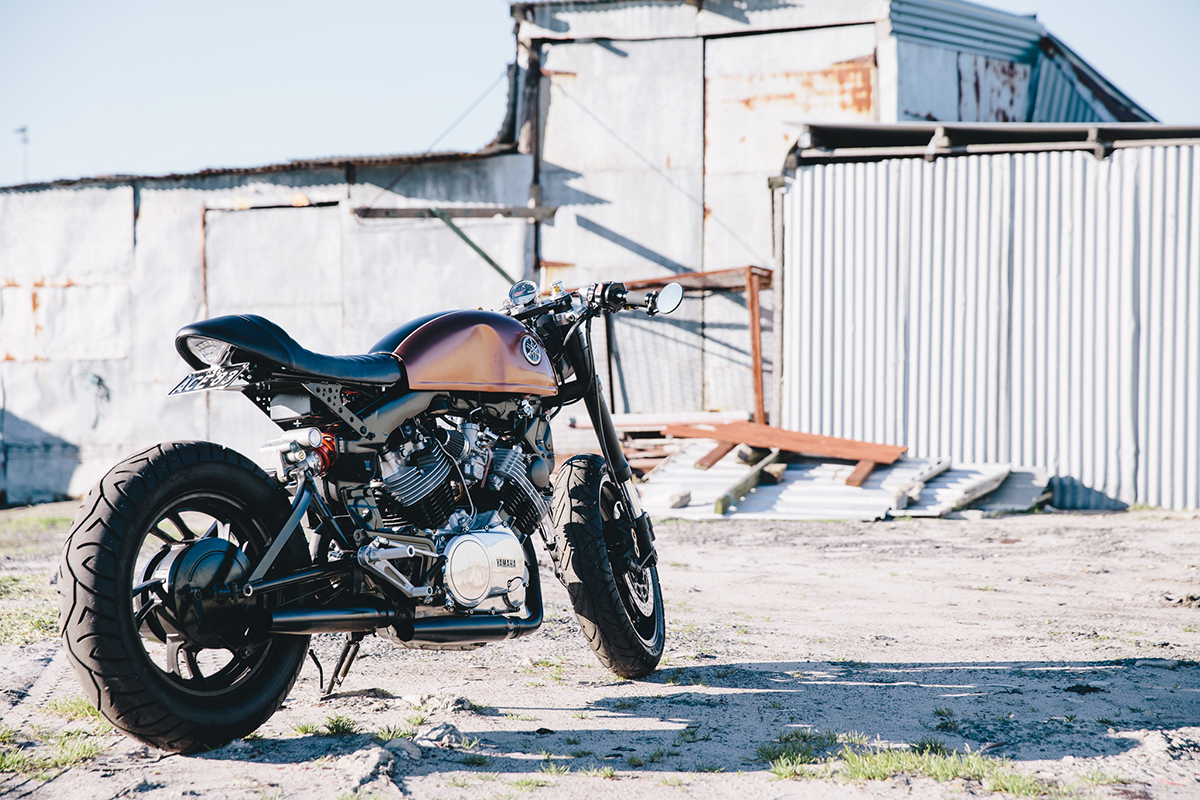 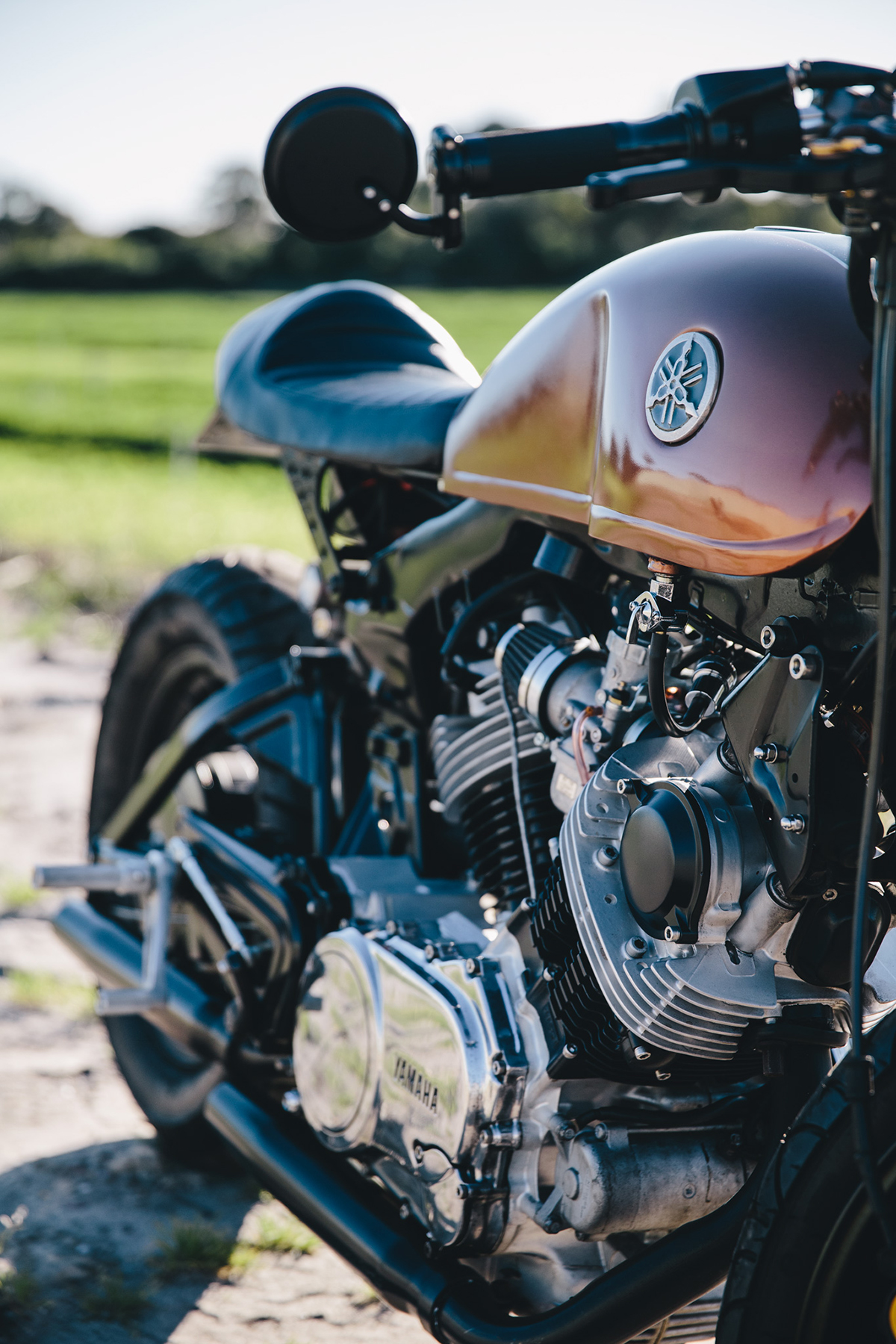 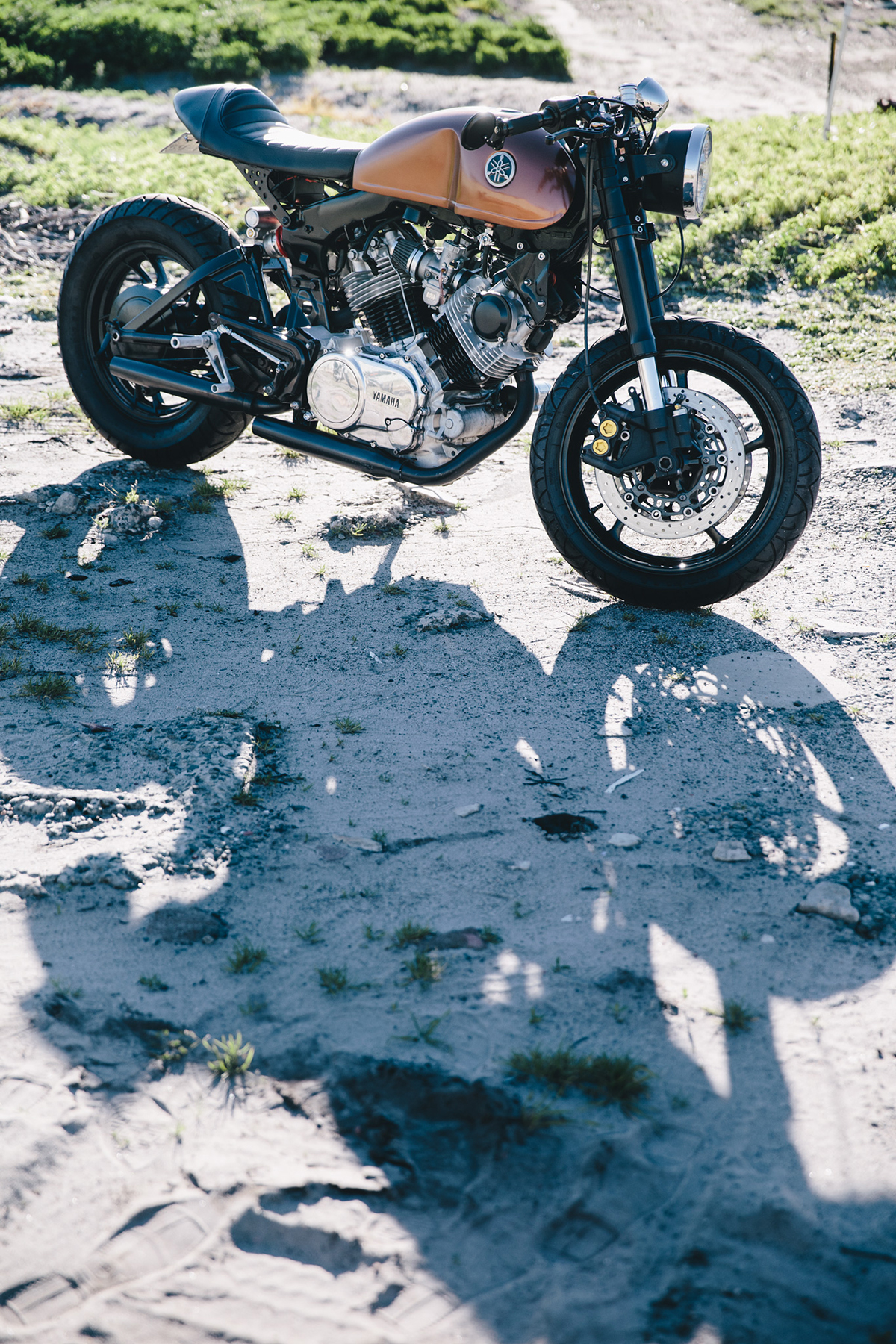 Was this a tricky build however? Or; trickier than most? “100% it was tricky! I carry an allan key and a screw driver with me at all times, I can tell you that much. This machine should have been in the video clip for Run DMC’s ‘It’s Tricky’. The whole frame acts as the airbox for this bike. Once we sand blasted and powder coated the frame, we didn’t know until the very end but the frame was filled with little particles of excess sand. Once the bike got going that sand ended up in the carbs. The carbs ended up getting stuck together and the pistons weren’t quite working as they too had gotten sand in them scarring the barrels and causing them to scratch. Oil then got stuck in the exhaust as the pistons weren’t working which resulted in a whole heap of smoke as the oil was burning. It was a domino effect, a massive headache and a need to go back to the drawing board. The solution? We put air filters directly on to the Mikuni carbs, bypassing the frame as an airbox. Thanks to ‘Unlimited Head Jobs’, we bored out the barrels enabling us to put slightly bigger pistons. Bigger pistons= More power. We now have a sex machine that is the star whilst riding amongst the latest builds and bikes on the road”. 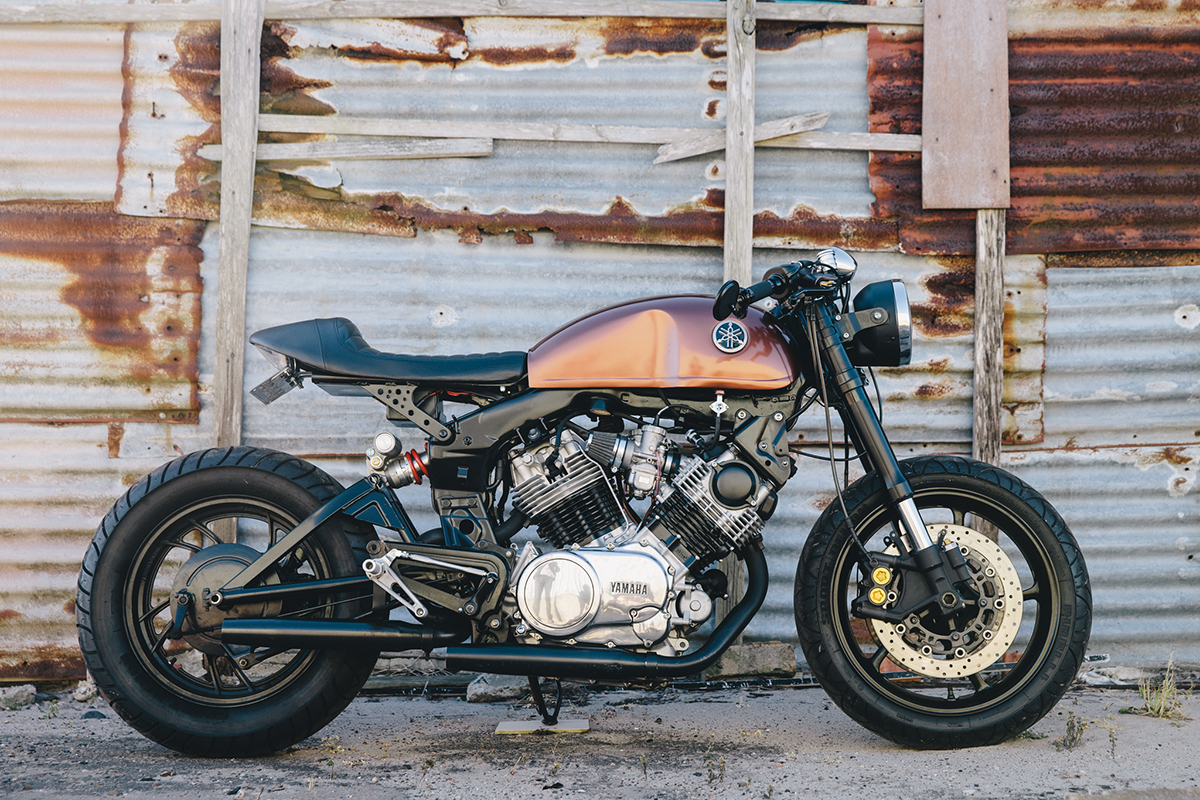 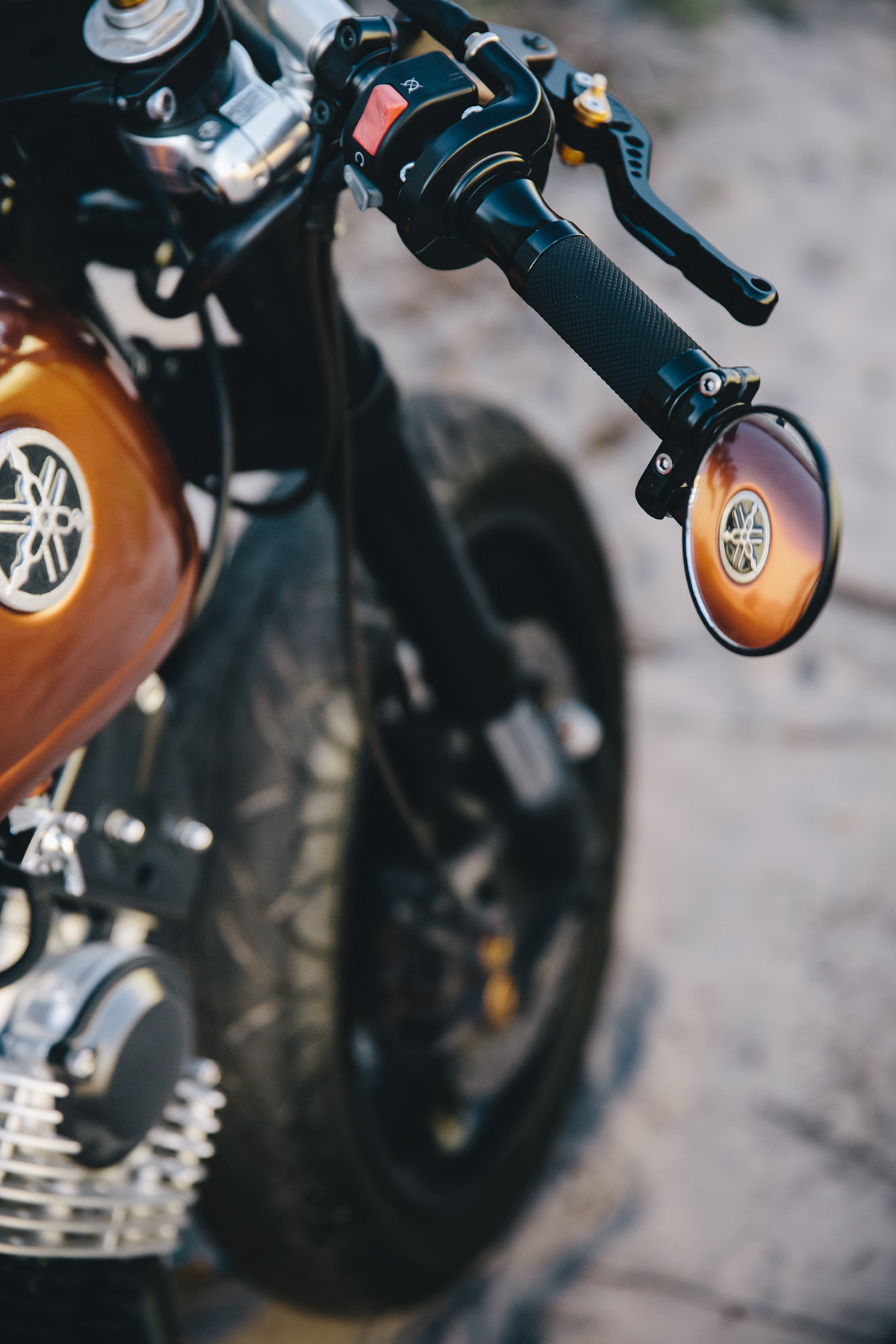 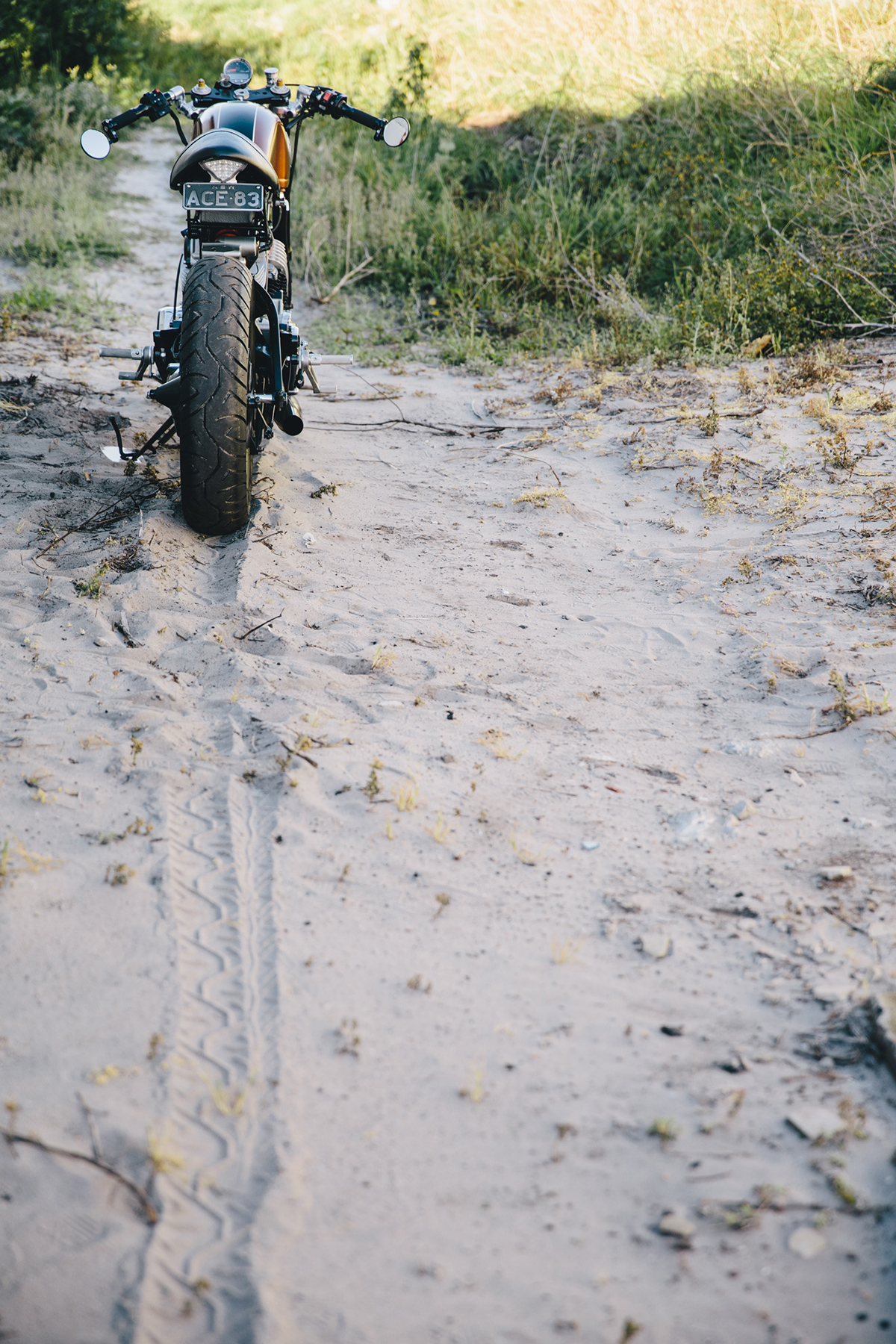 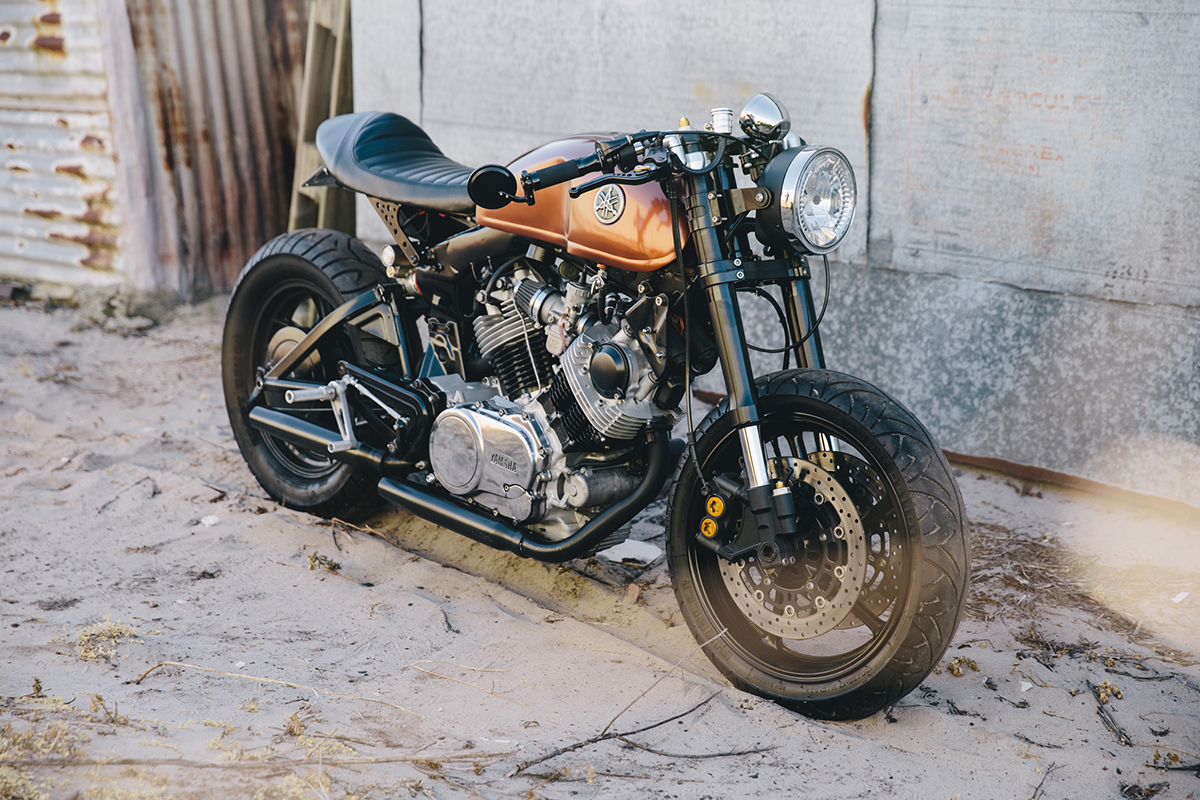 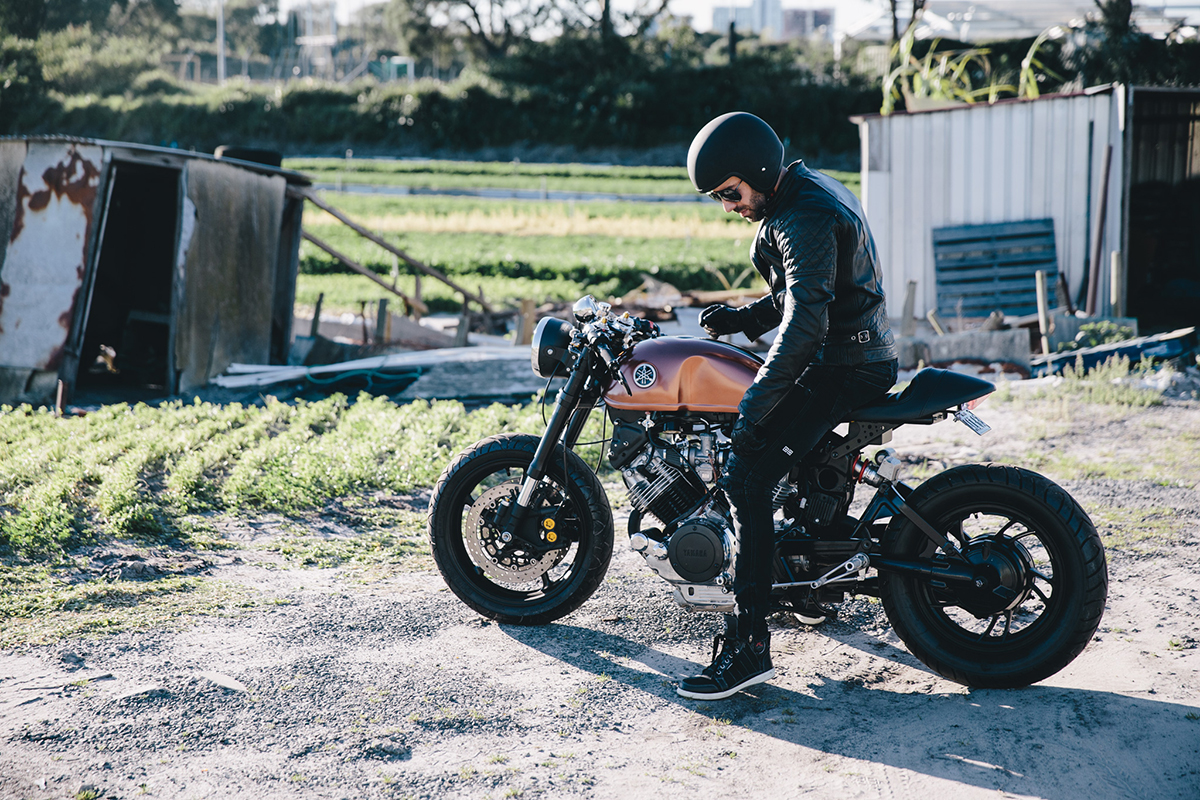 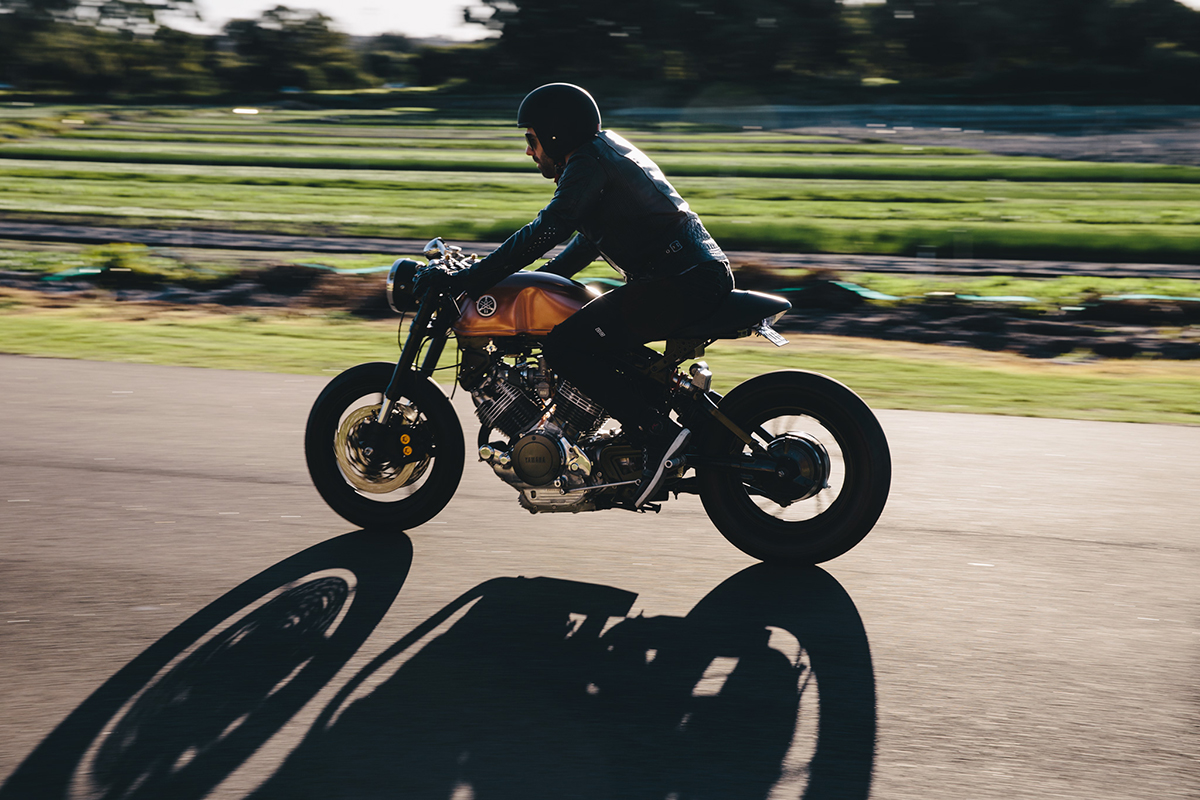 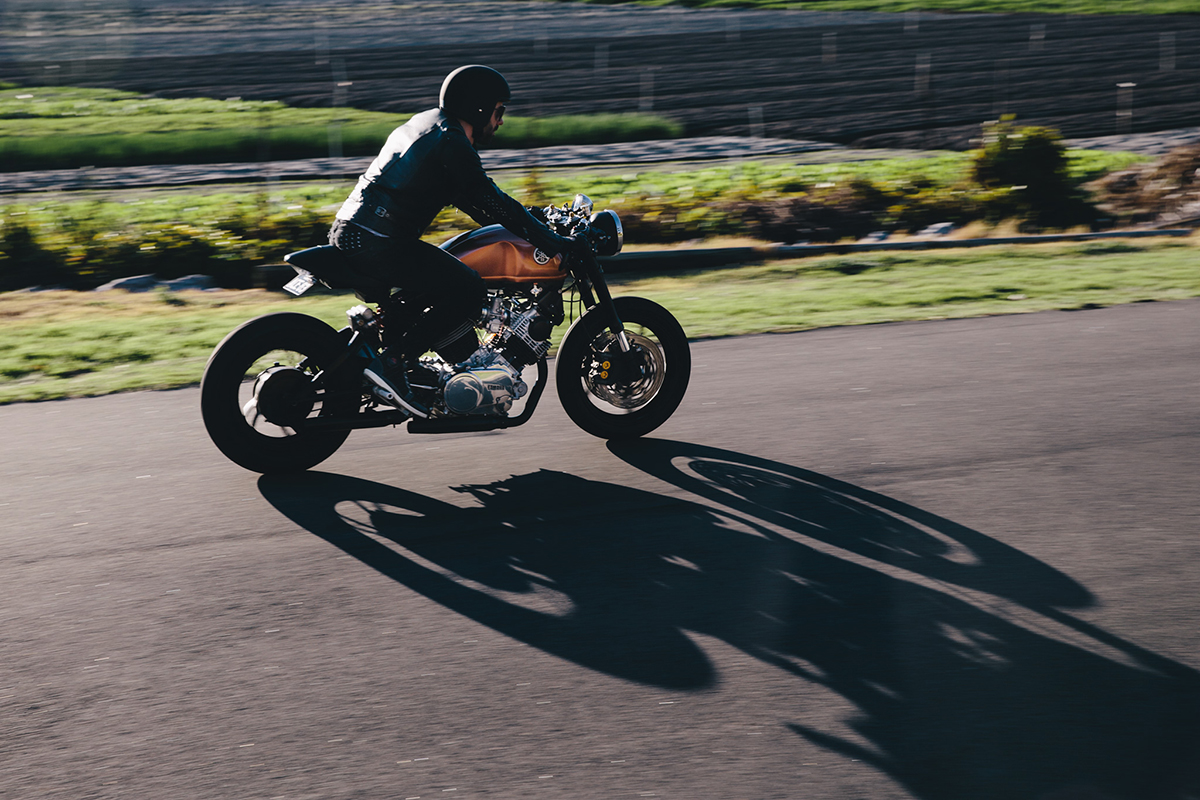 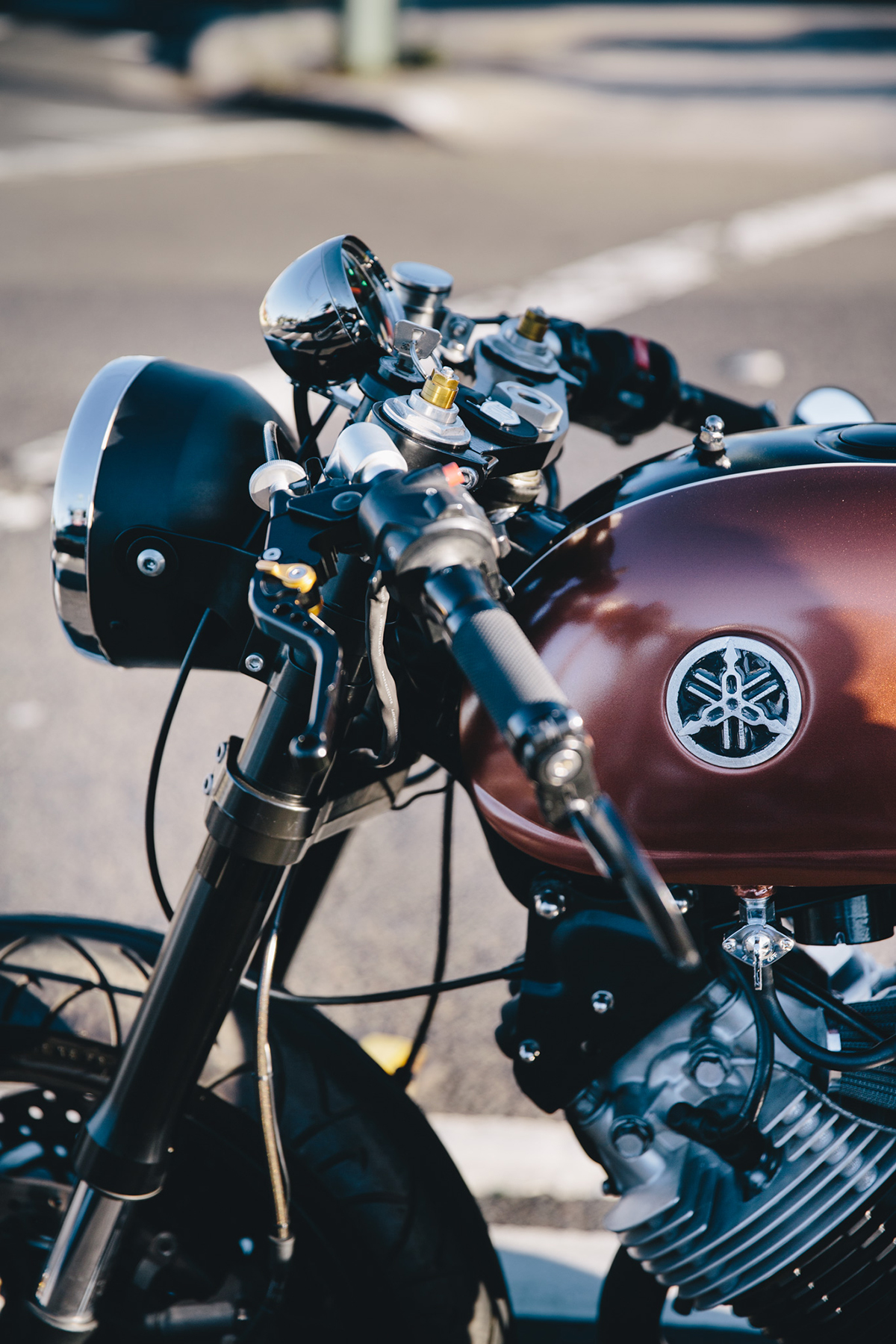 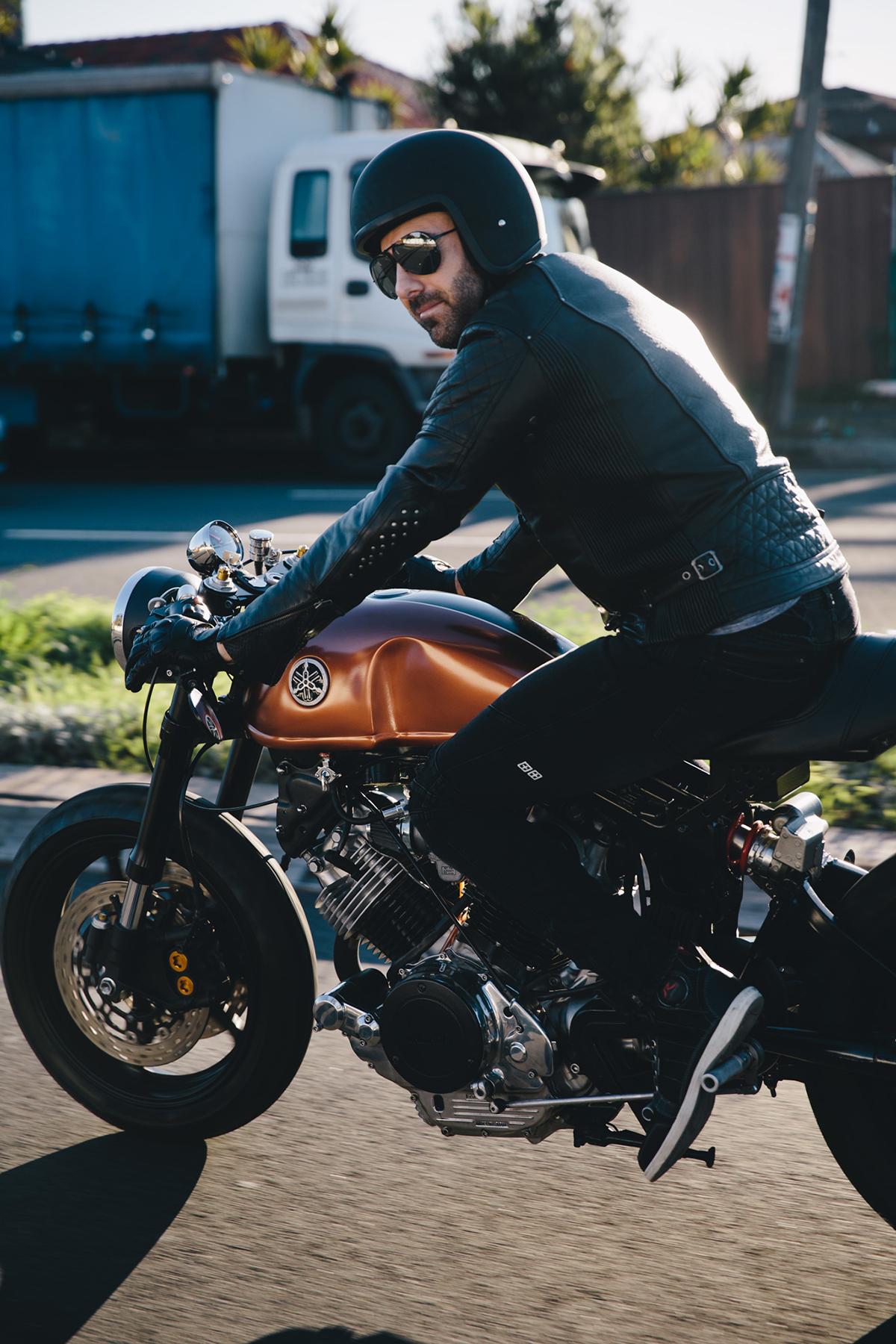 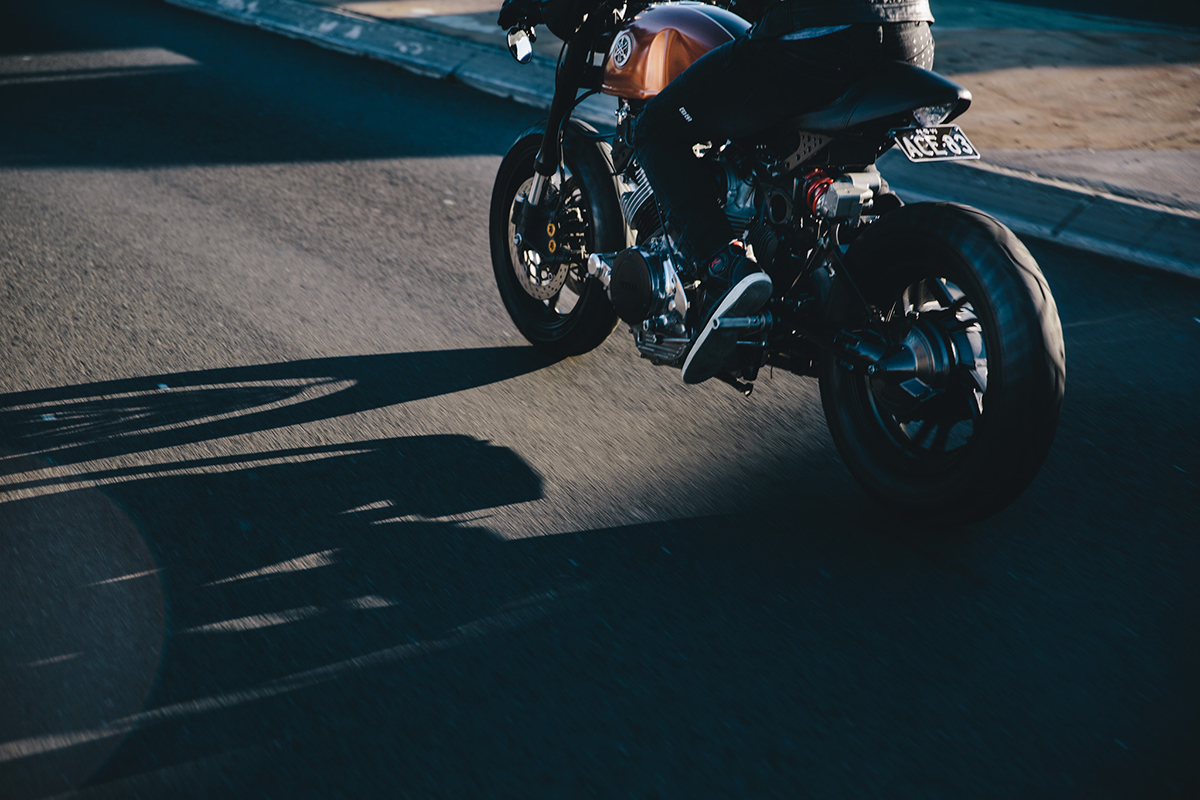