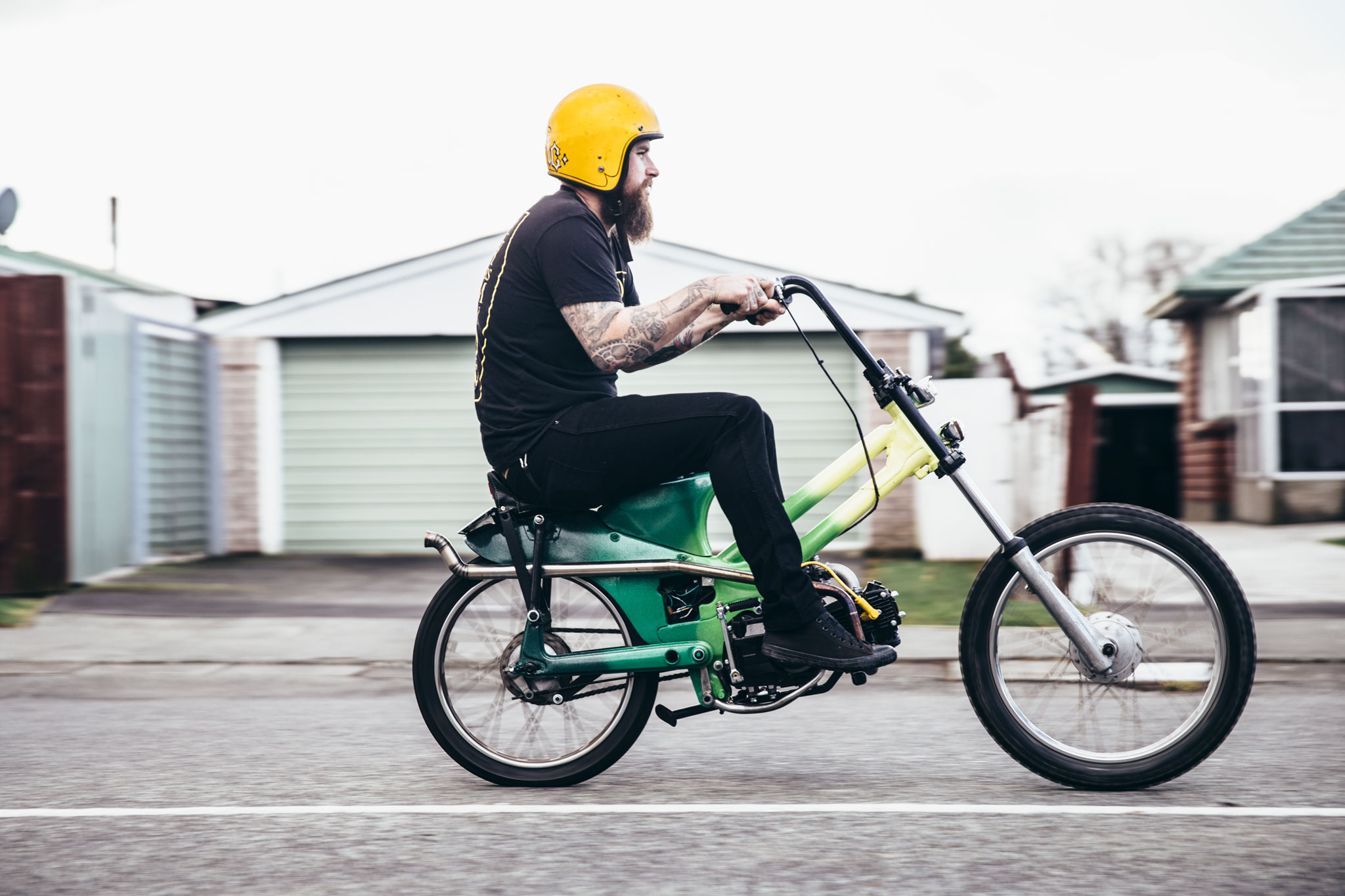 Head honcho of Christchurch’s mini moto miscreants, the Quake City Rumblers, Chris felt the need to pump some wildness back into this eclectic group. In true QCR style a ridiculous little machine was created from spares and creativity – and so here is Mantis. 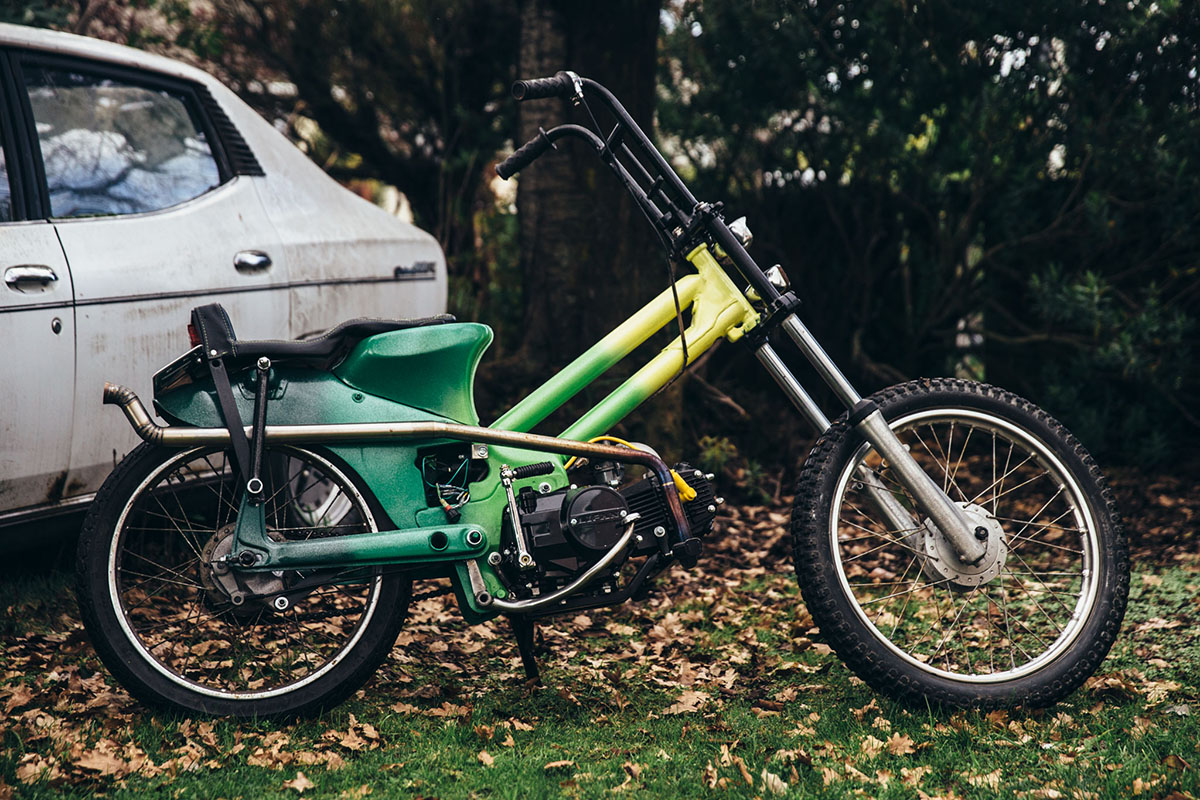 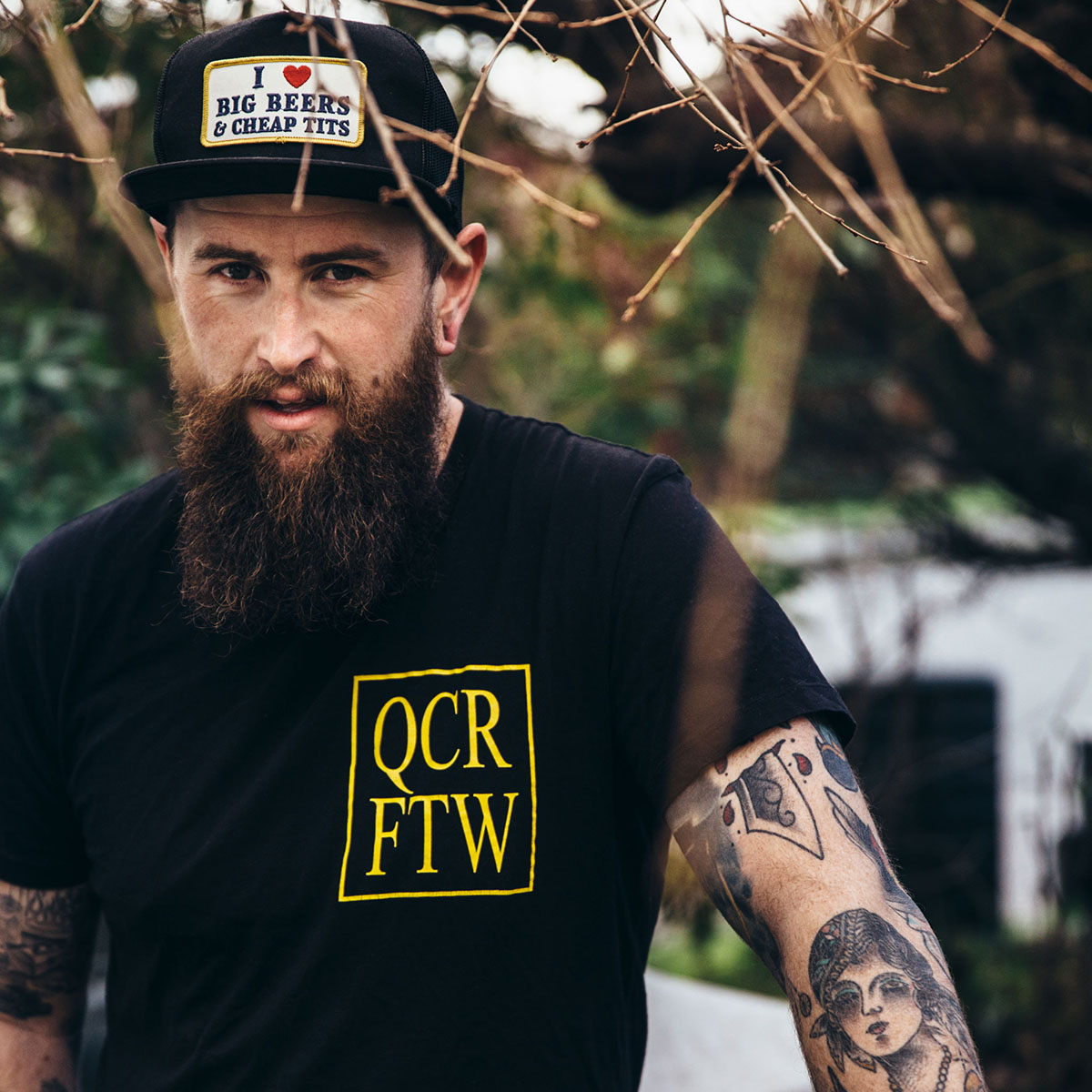 There was absolutely no say in the matter as far as Chris getting into motorbikes was concered. With grandparents that rode (and still do) along with his Mum and Dad being 2-wheeled addicts, poor old Chris had no chance. It’s a tough life loving bikes, what with all the fun riding and customising to be had, but Chris puts on a brave face. 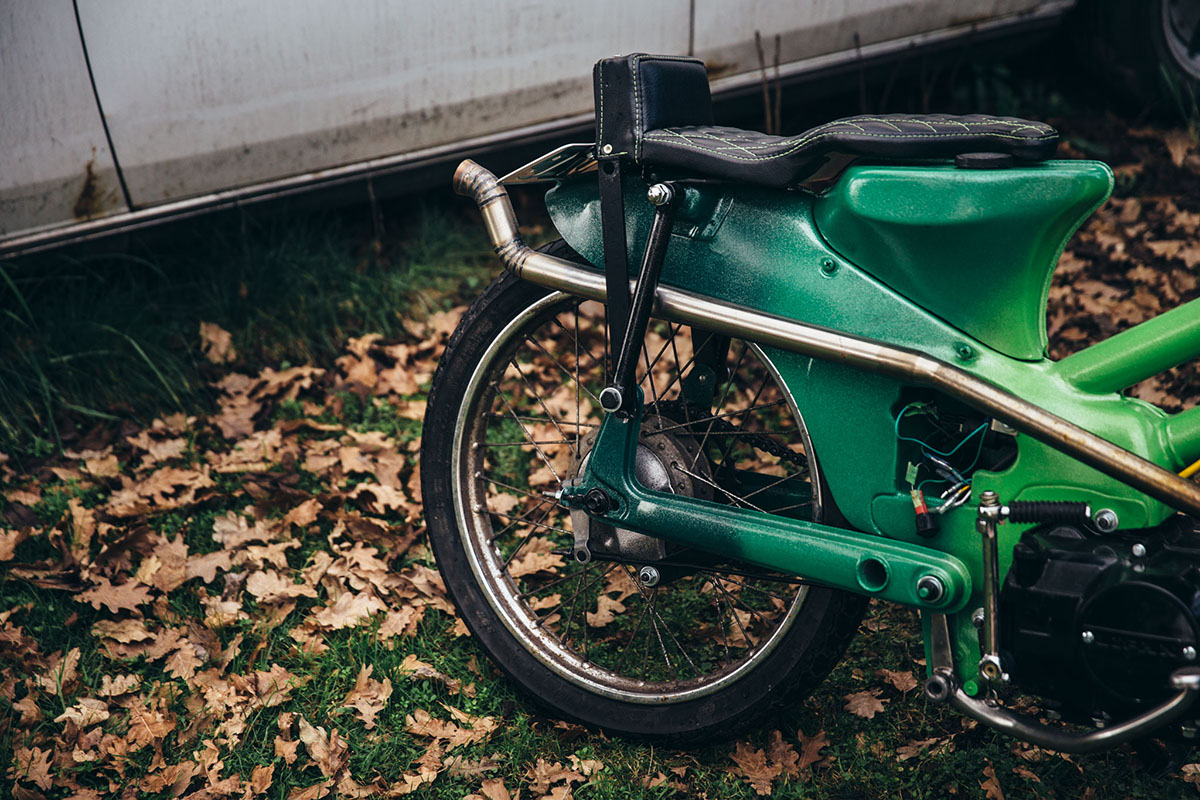 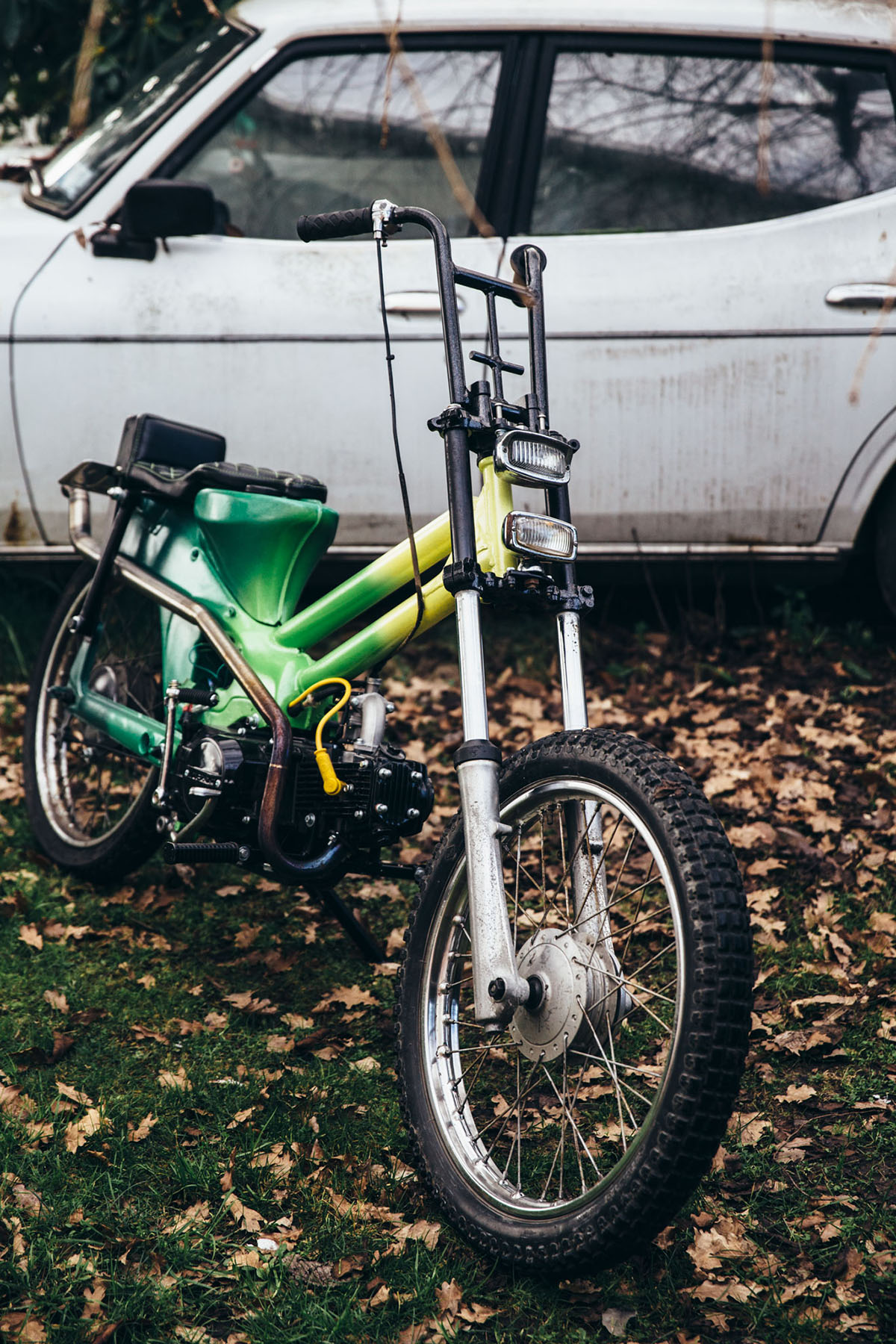 It would be after the earthquakes hit Christchurch that life would get a bit wild for Chris, in some very good ways mind you. Upon seeing a chopped up Honda C50 online, he was hooked. So much so, that at the next local swap meet he scored a C50 for himself from a mates old man. He was now sorted. “I took the bike home and chopped it up, trying to get it to look as close to my inspiration as I could. Once photos were posted up, other mates got keen. The initial name I gave myself for chopping my C5 was Quake City Rumbler, which then became a group of mates all riding and chopping bikes. It’s snowballed over the last 6 years with plenty of little bikes being chopped and modified into some creative machines.” 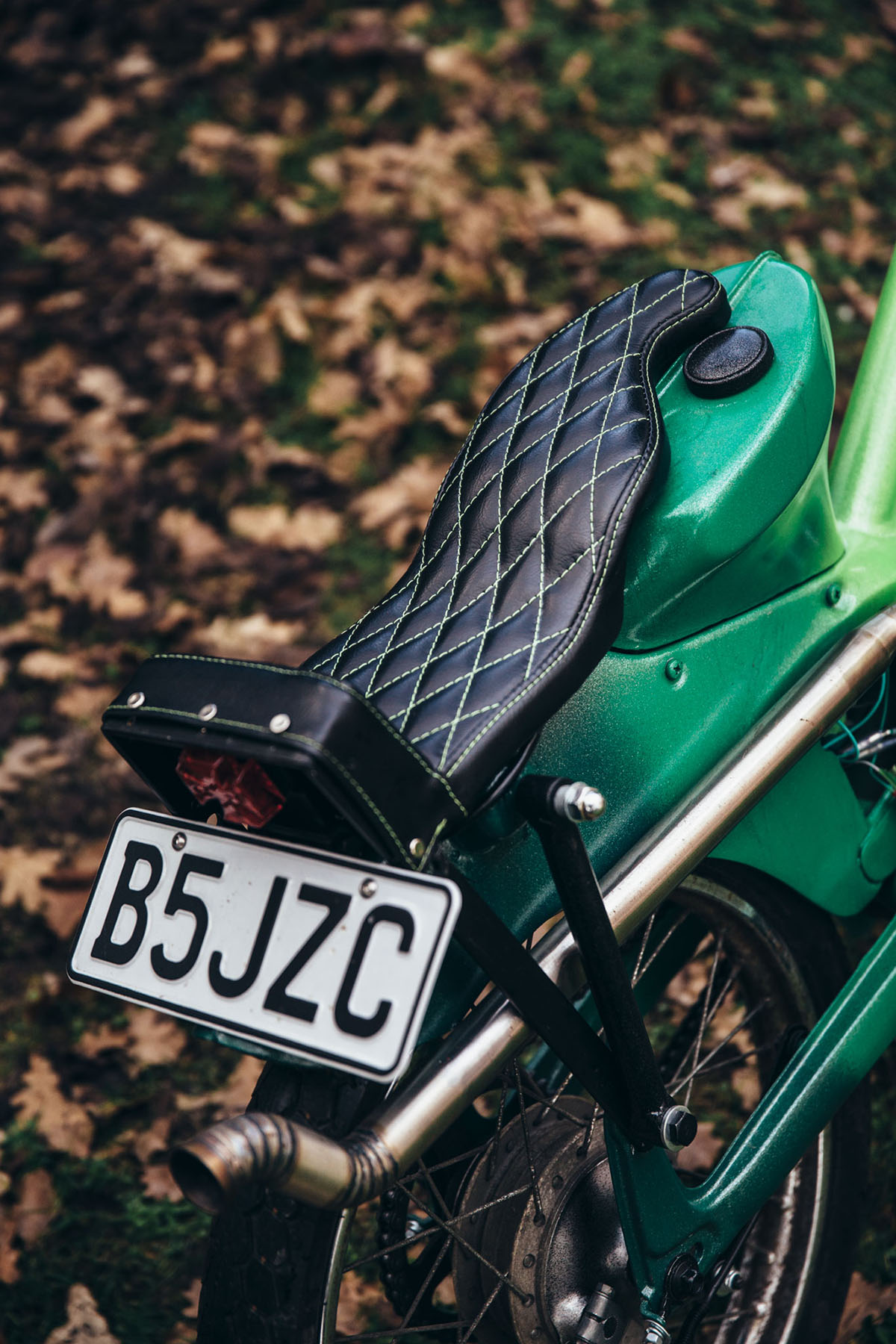 As far as chopped up mopeds are concerned, step through frames are the only way to go in Chris’ eyes. With his good mate, and fellow ‘chopping small bikes into ridiculous creations’ enthusiast Aaron on board, this new machine could be started. “Aaron supplied the frame and parts, so we got stuck into it one Saturday morning and finished all the fabrication over the following weeks. The idea was to build something we hadn’t really seen before, and to build it wild. Bright colours and loud pipes, that’s the ticket.” 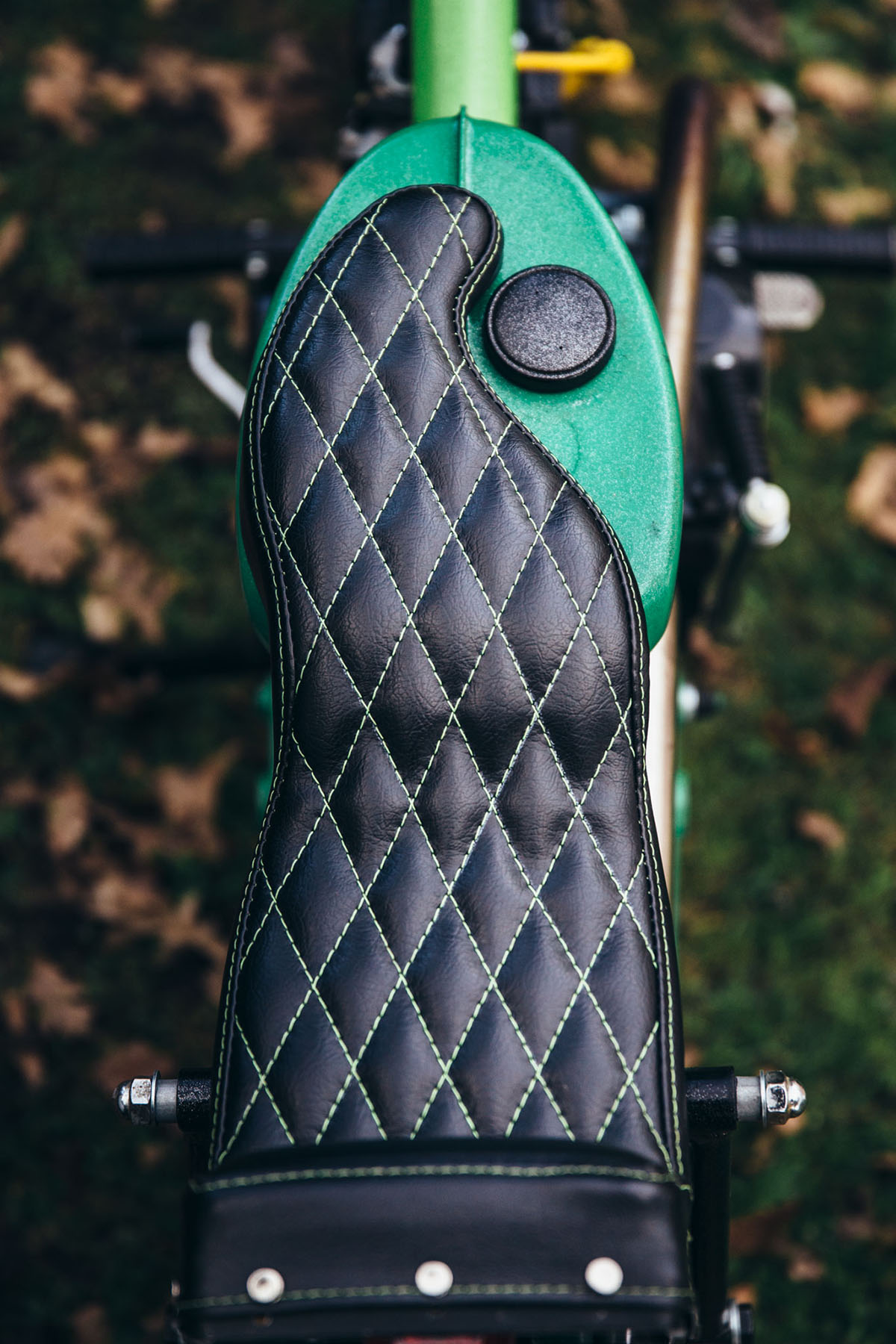 “Aaron and I enjoy building bikes; we find a calm zen amongst the chaos when we’re building. As I’ve recently decided to overturn some anxiety that’s beaten me down for quite some time, it was good to bounce off Aaron and be in a positive environment. We kept pushing each other to express ourselves through our bikes, and it’s definitely worked.” 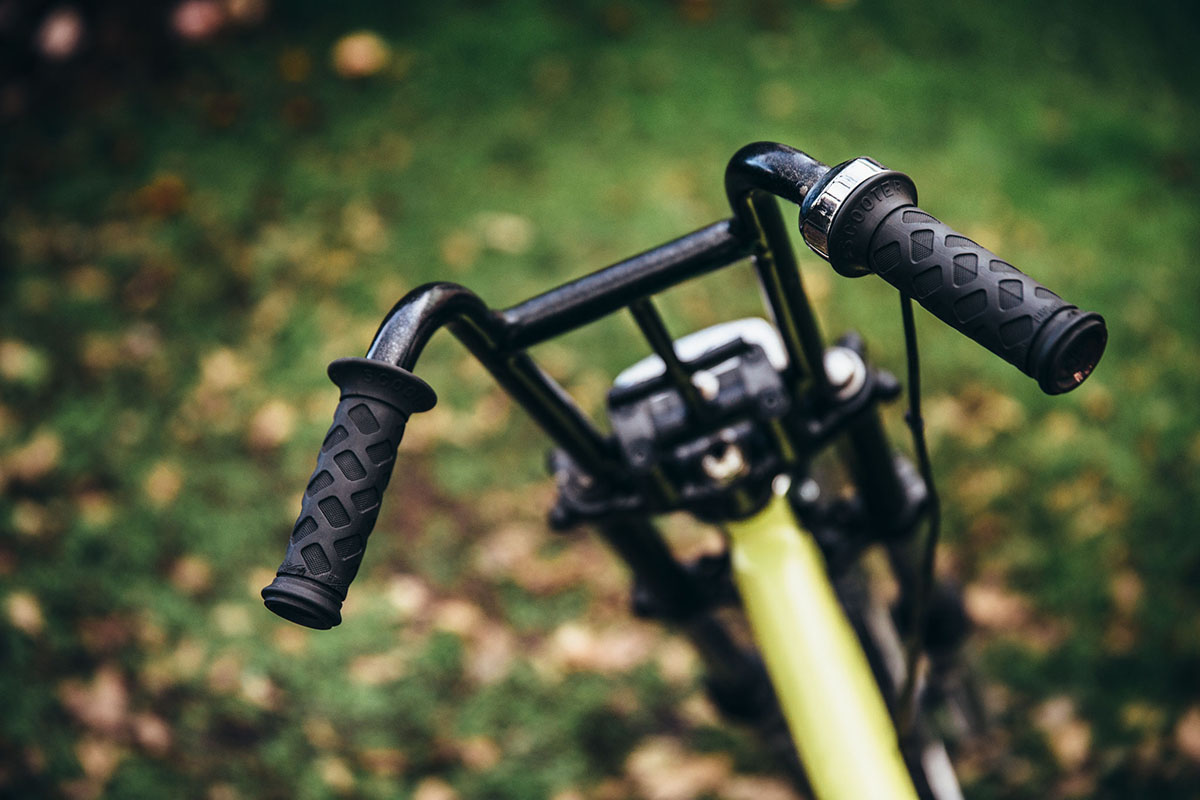 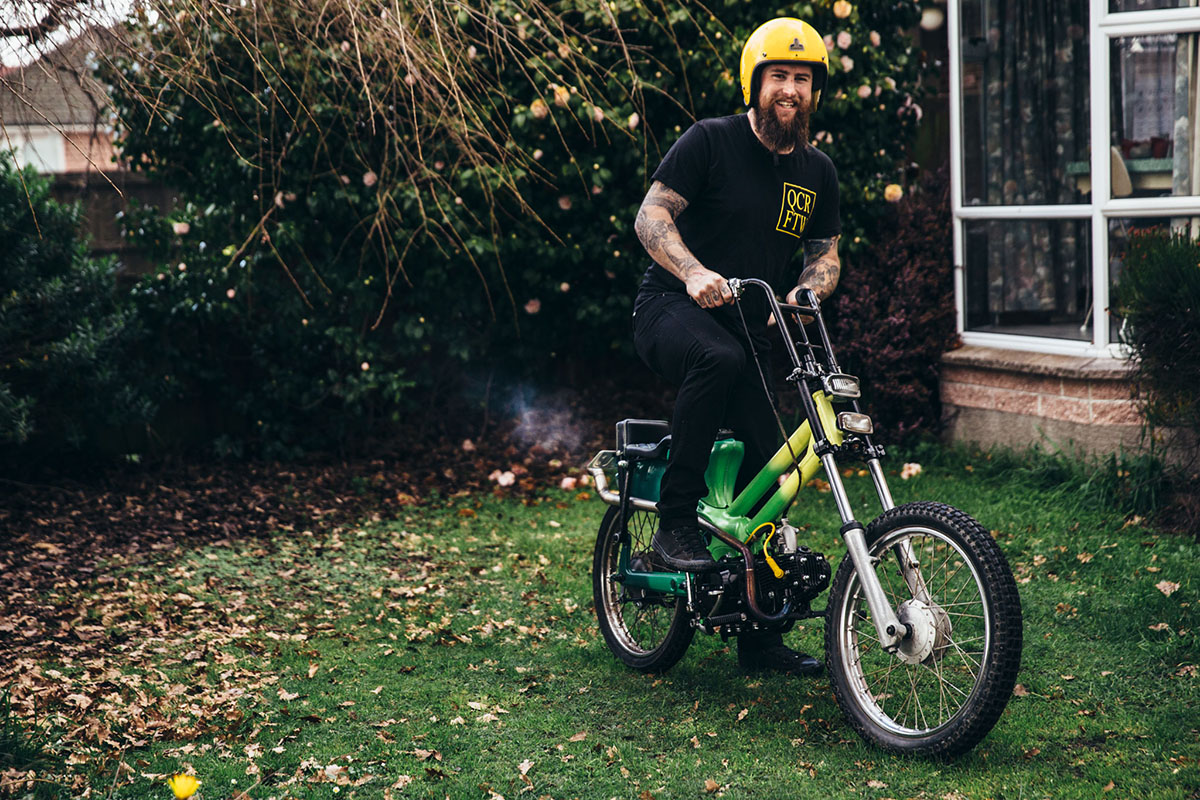 So, armed with a bare frame and swing arm from a stock early ‘70’s Honda C50, work begun for this mini chopper creation. “I added the same diameter top tube just above the existing main frame tube, then fitted a longer telescopic forks over the stock leading link front end. I then fitted some narrow pullback bars with an inverted cross brace off my old bike. I made up a sissy bar and seat pan that drops down behind the tank and curves around the fuel cap. Then I slotted in a mini iron cross taillight I got off Aaron. A fellow Rumbler, Lewis Horrell, did an amazing job on the seat as always, matching it perfectly to the bike.” 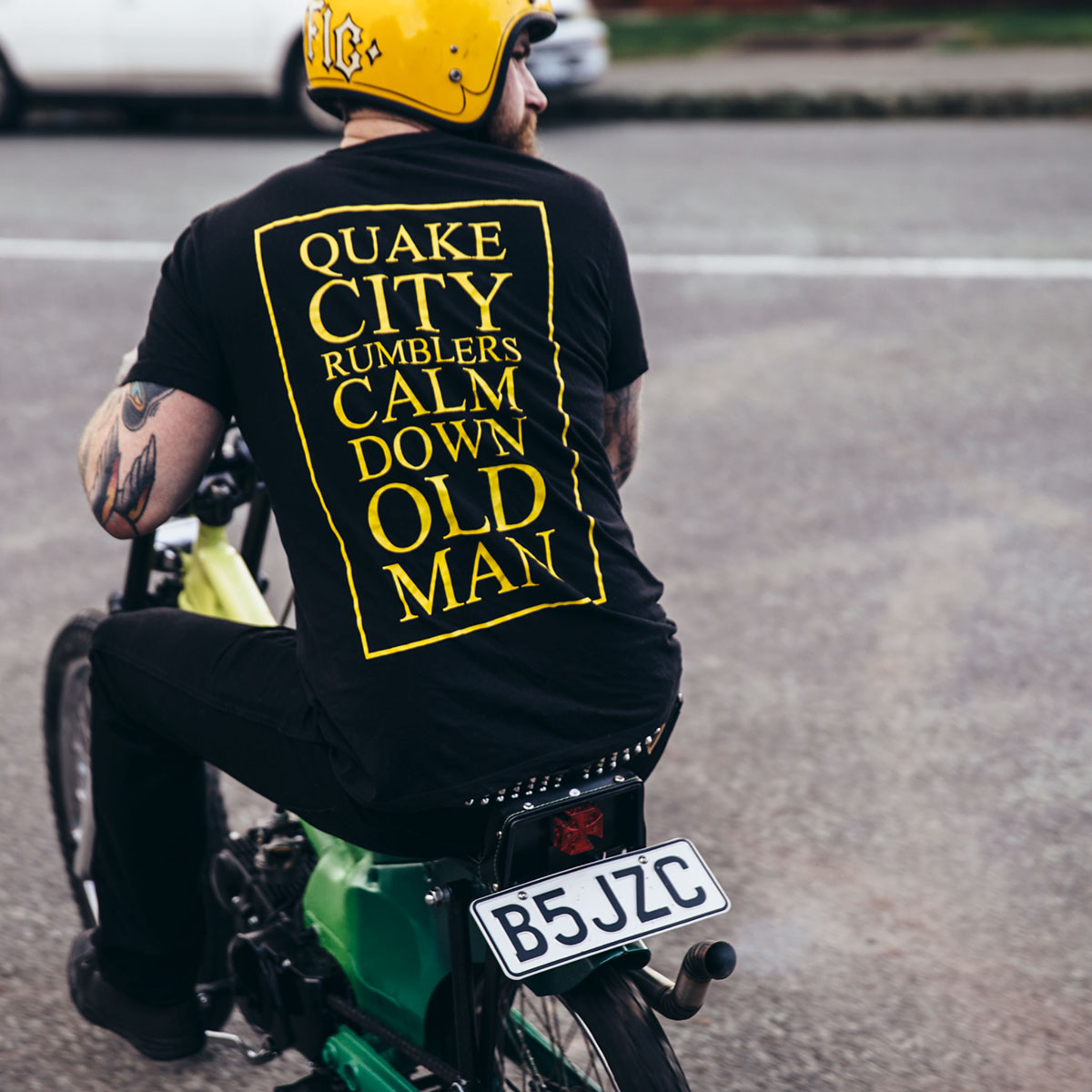 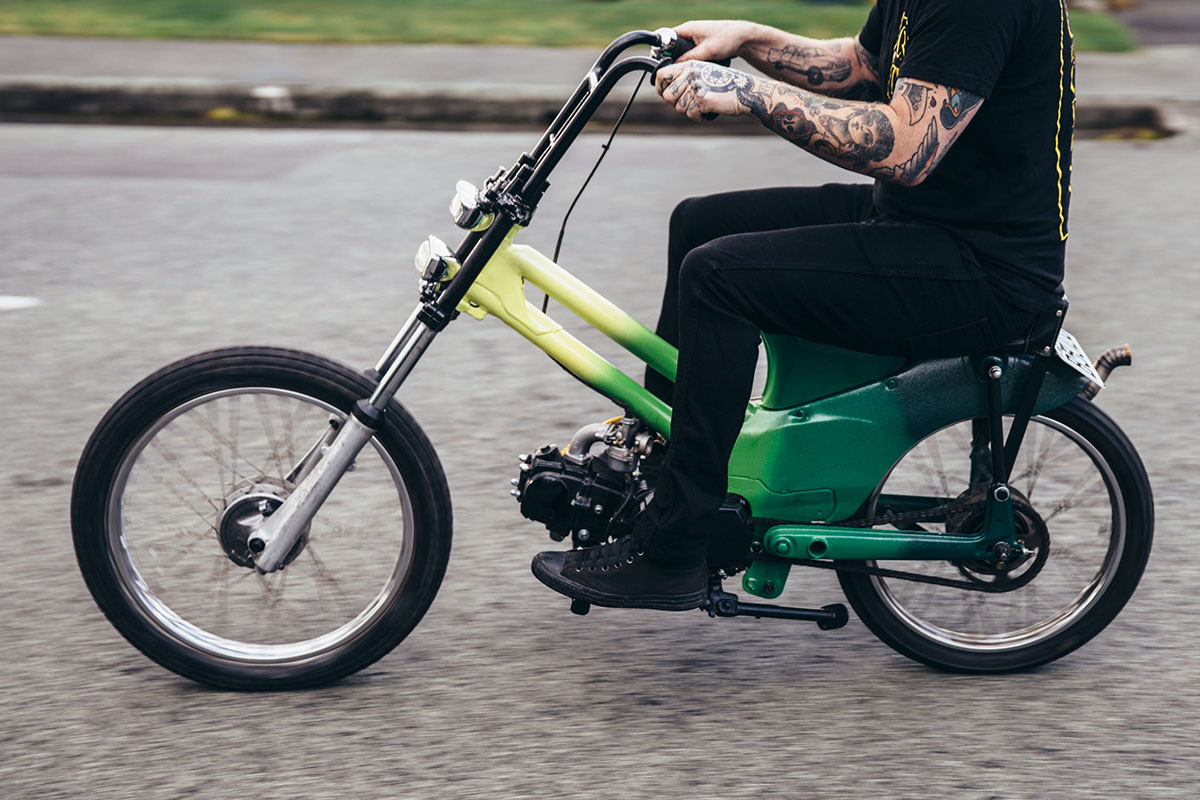 Opting out from using the original motor a brand new 110cc Auto Lifan motor was jammed in – both for realibility and affordability. A 19” front wheel was whacked on while the rear remained at a 17” stock, with some hard trail struts helping lower it down nicely. “Once everything was bolted on and I was happy with it, I stripped the frame and welded up all the holes that were no longer required. Once this was done some filler was used to smooth out the welds and tidy up other areas before laying some primer down for painting.” 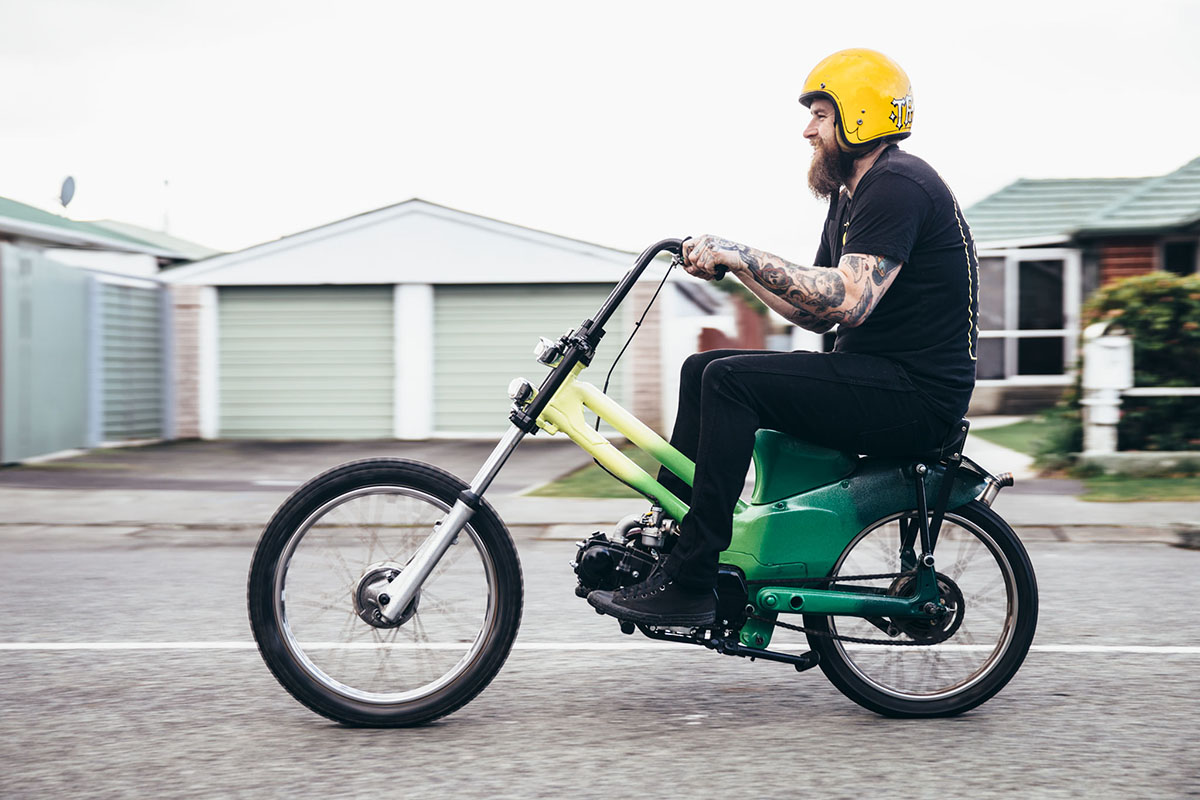 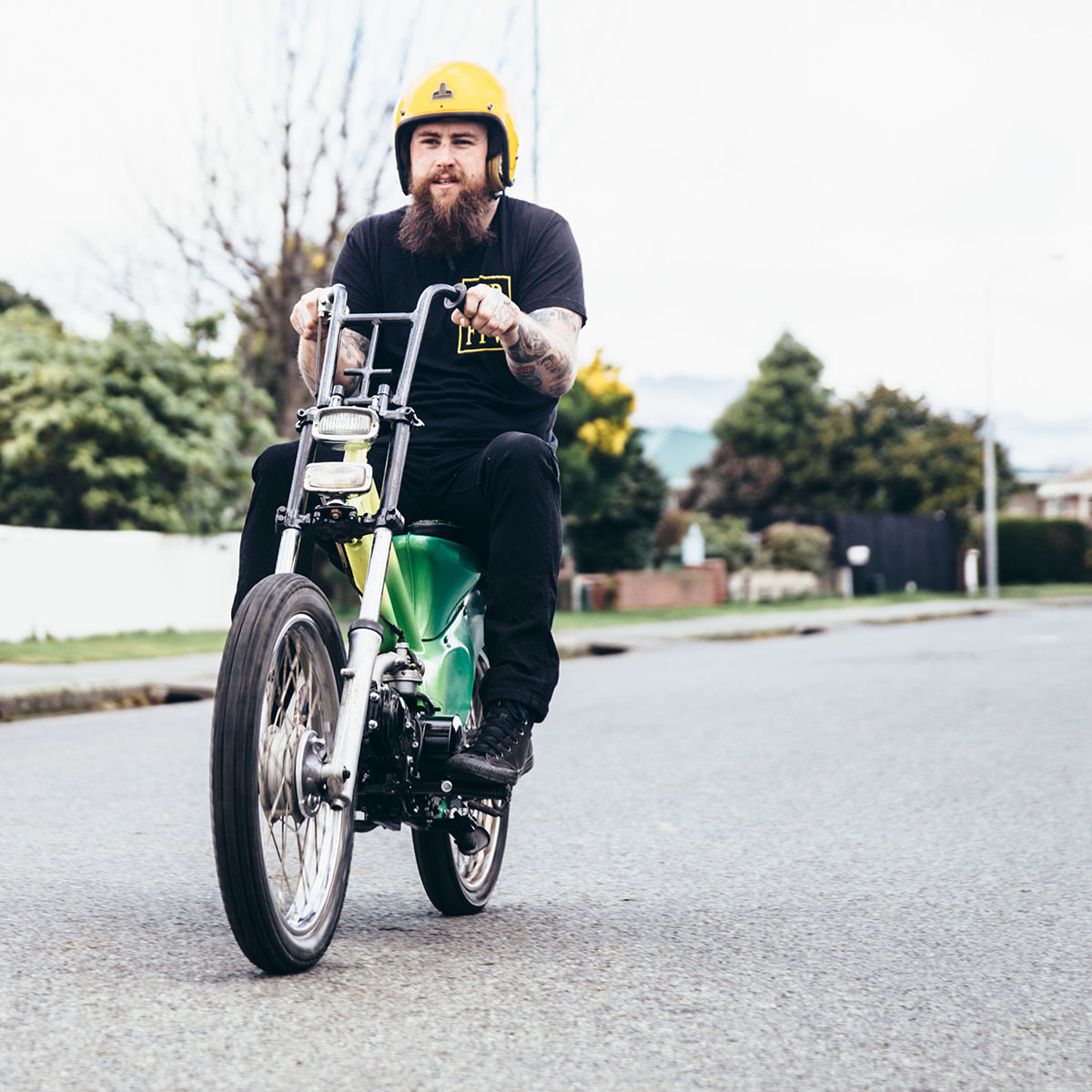 And this is when the tricky part of the build arrived for Chris. “I had no idea how to achieve the paint scheme that I desired, but after talking to my best mate, Mark Sender, while he was tattooing my back piece he said he will show me how to blend colours into each other. After a demo I took the graffiti cans back to mine and waited for a sunny day. I hung the frame up from the garage door and proceeded to bled the bright yellow into the dark green. It looked nowhere as good as Mark had done earlier, but I was pretty stoked with the outcome regardless. To finish it off I blasted the frame with a metalflake clear coat then a few coats of clear. The colour and sparkle pops just right in the sun!” 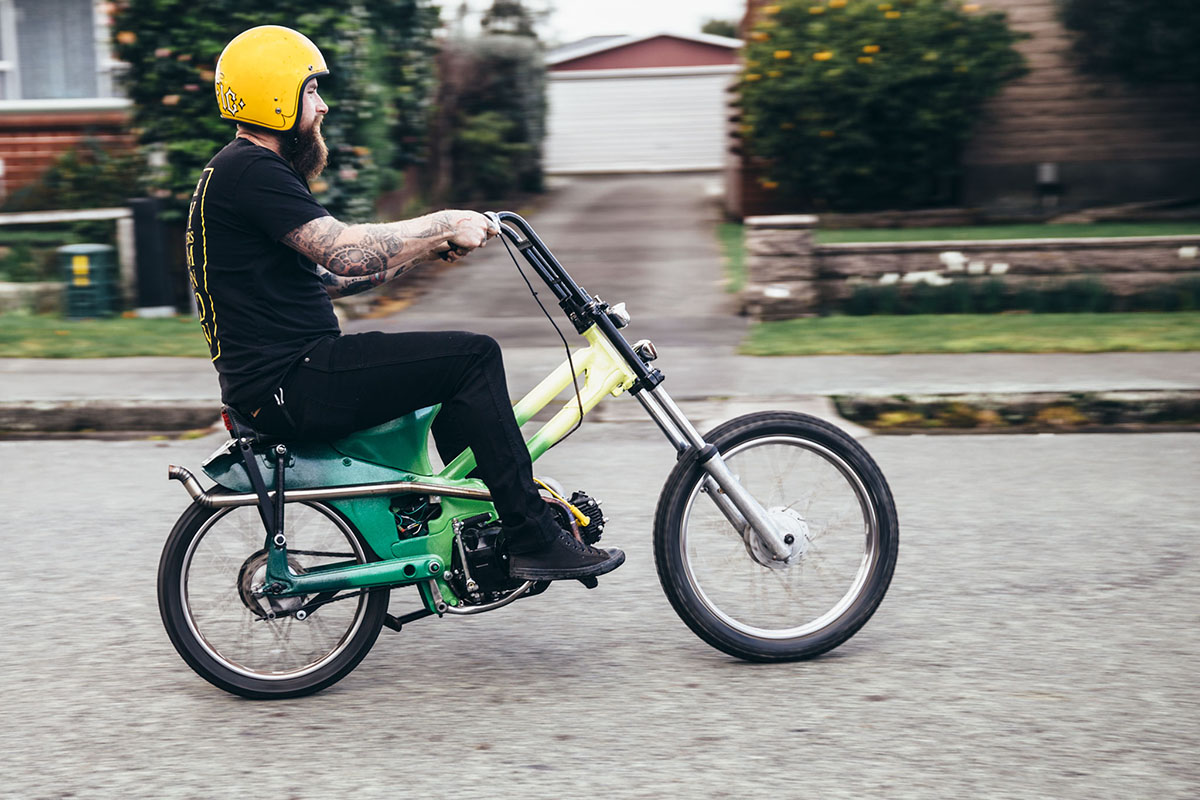 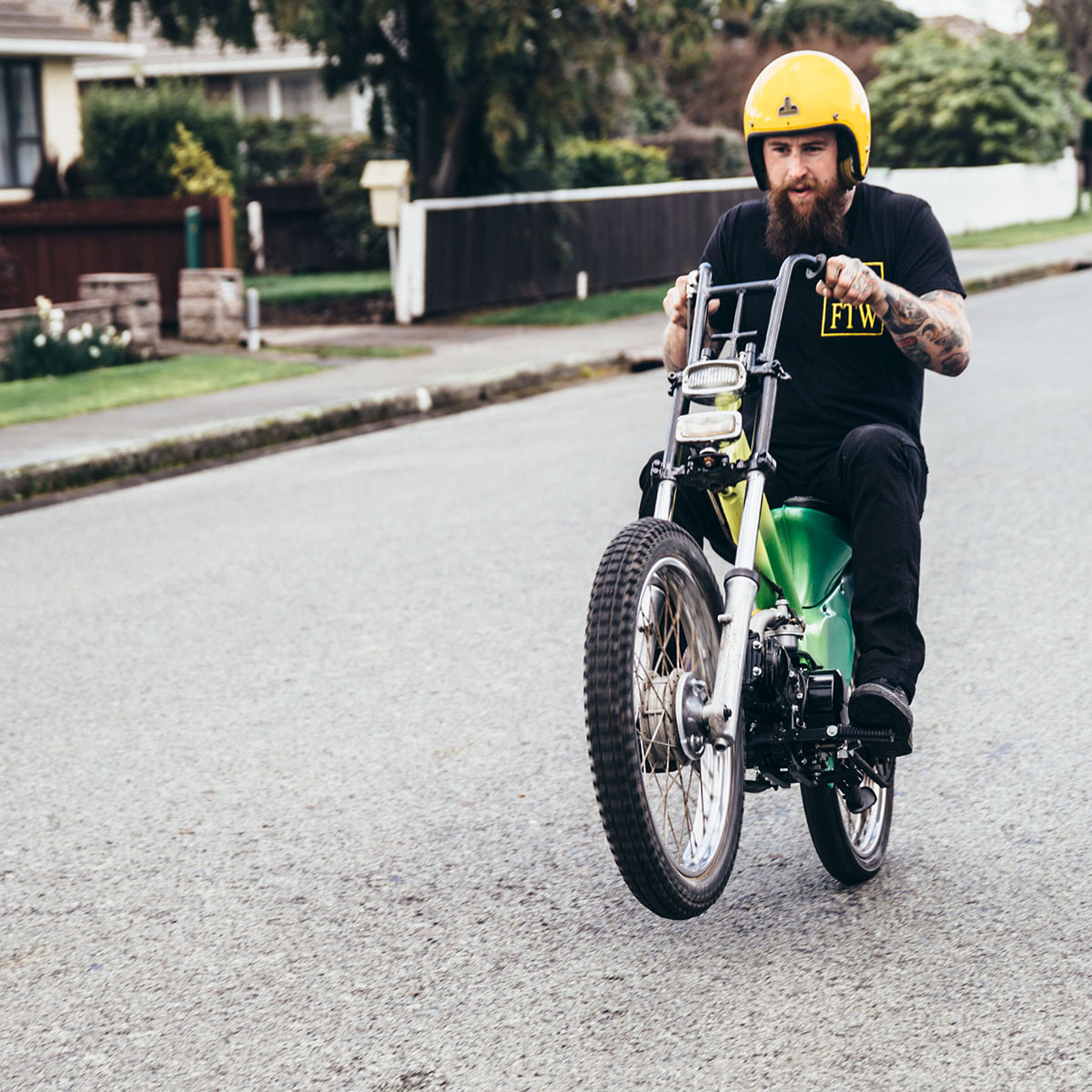 Enlisting the skills of another Rumbler in this build, Chris had his mate Jesse (the owner of a maniacal 160cc Honda C50) who is a deft hand at stainless steel fabrication to make the exhaust. “He whipped up a nice pipe with some really nice lobster back S bend behind the rear hardtail strut. It’s brutally loud and has coloured up nicely from the heat.” 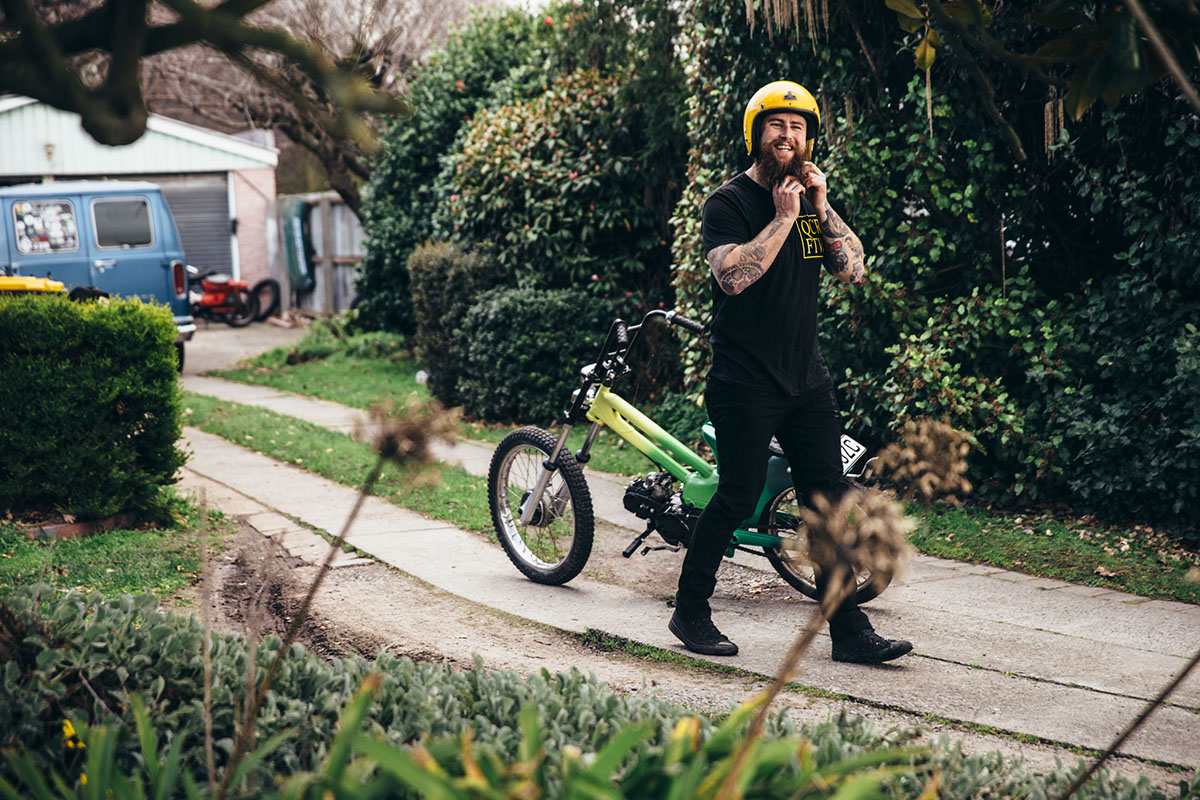 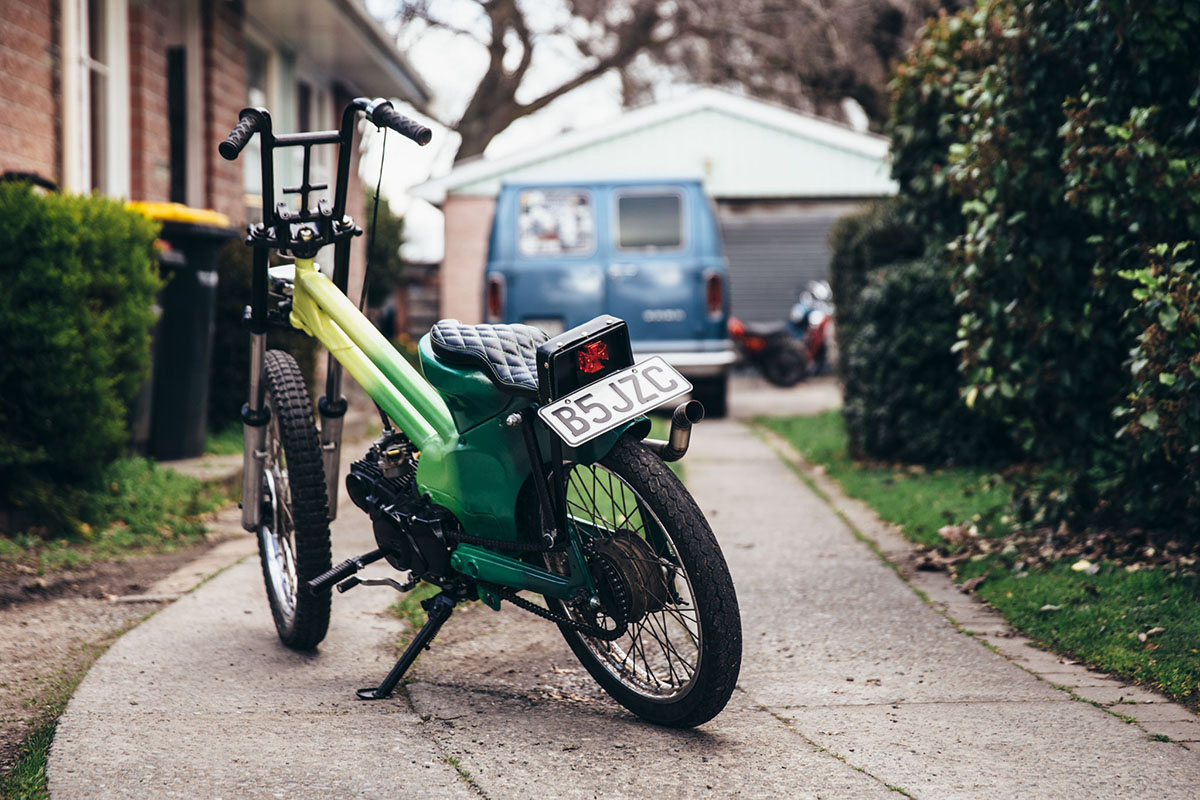 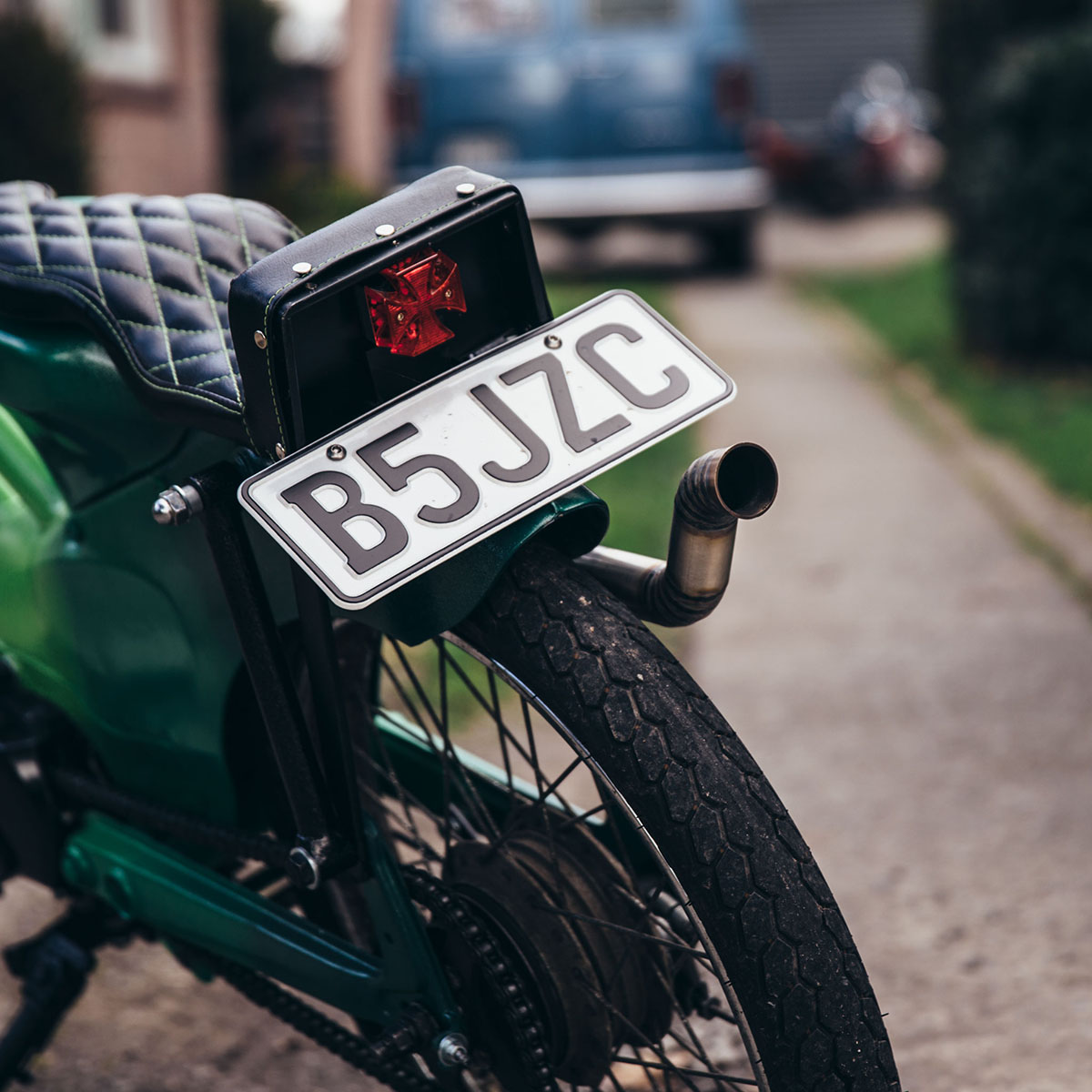 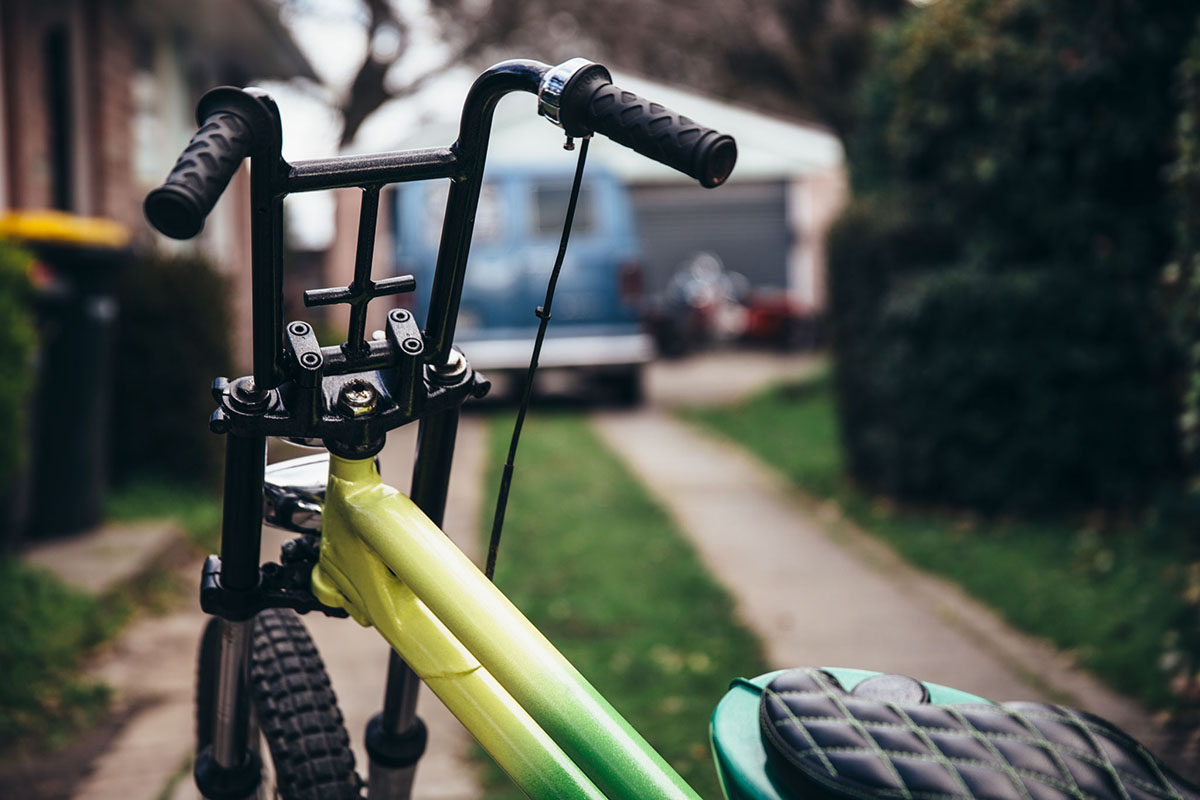 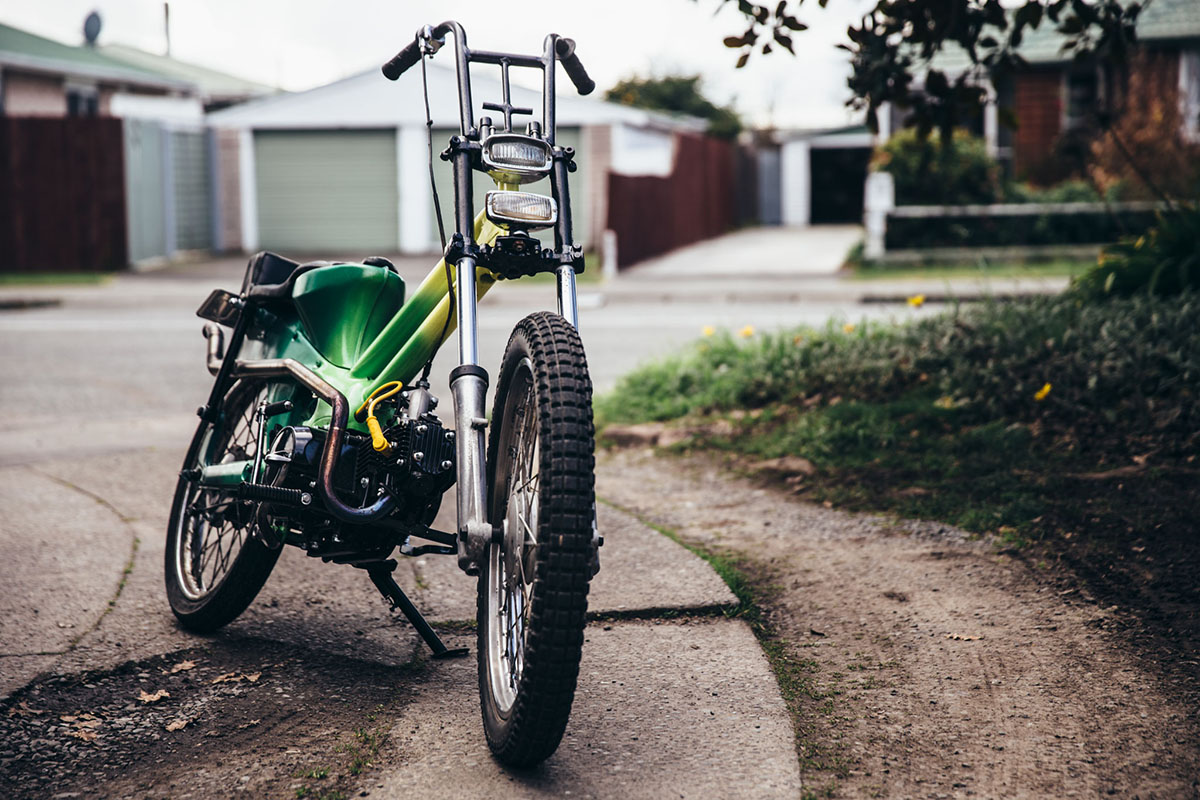 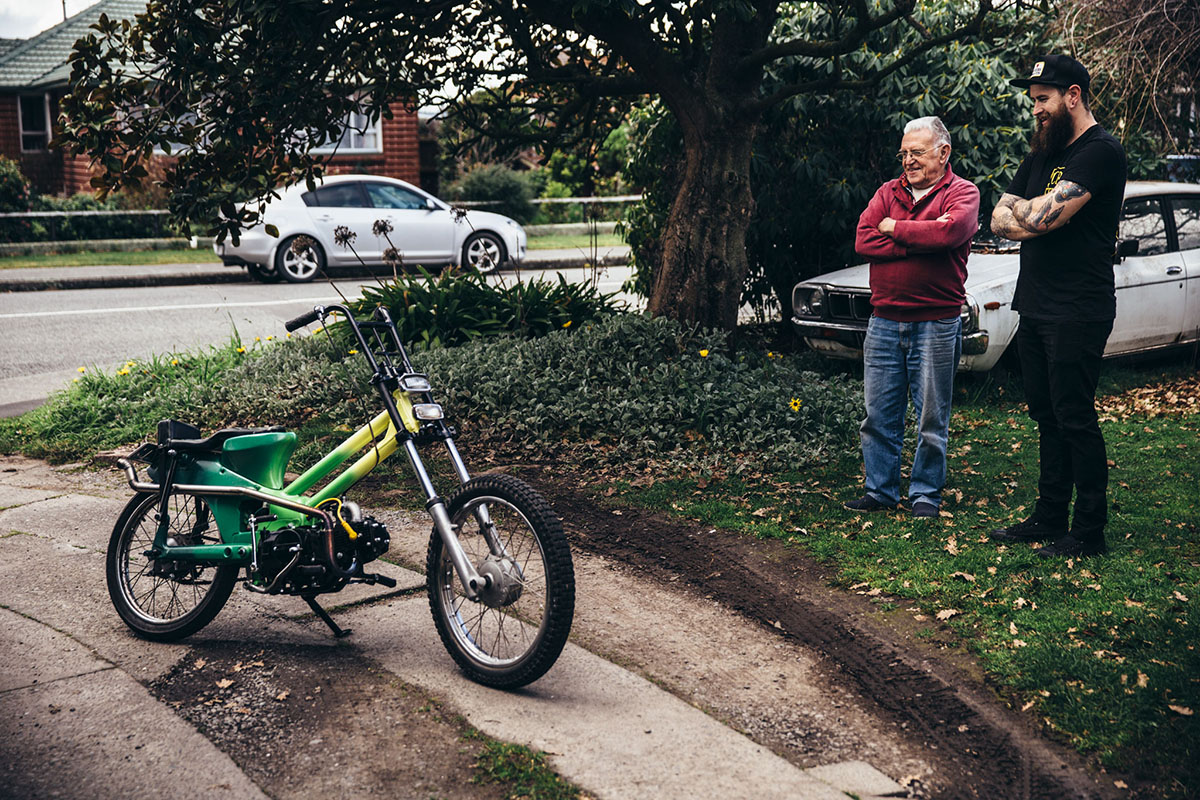 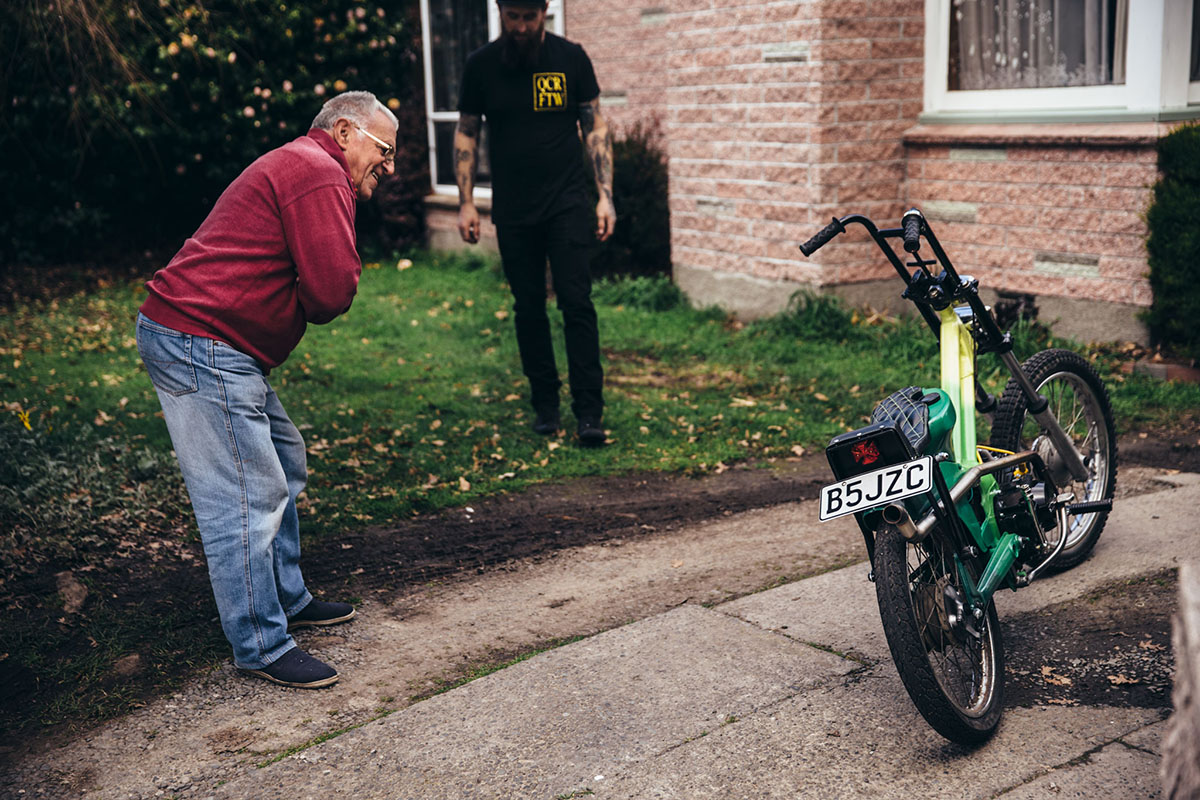