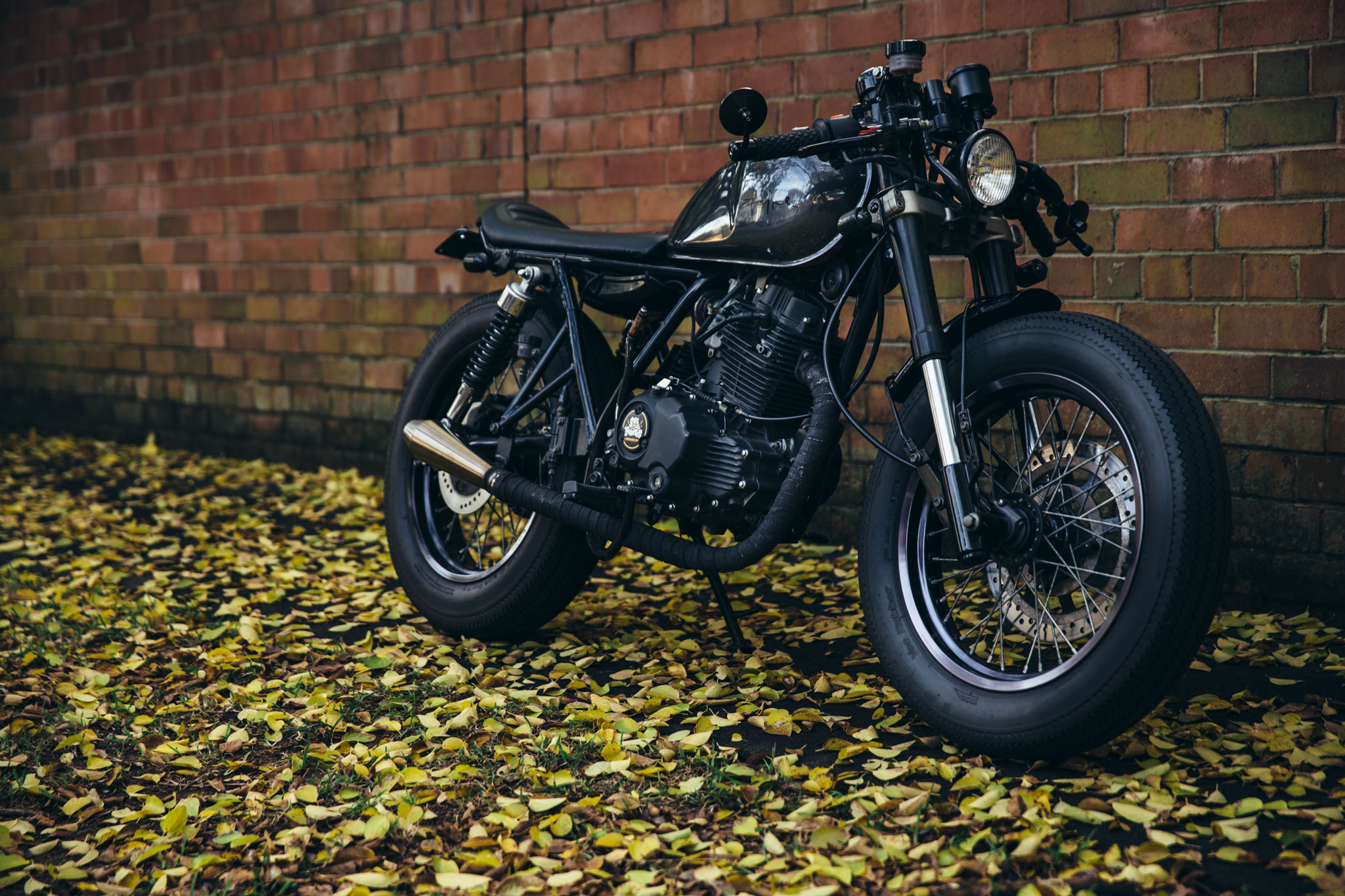 After selling a Café’d up Honda CB250, a new project was on the cards for Adrian. Falke is a stocky, gruff 250cc machine that’s been stripped back and rebuilt to showcase the minimalistic lines and simplicity of these newcomer beauties. 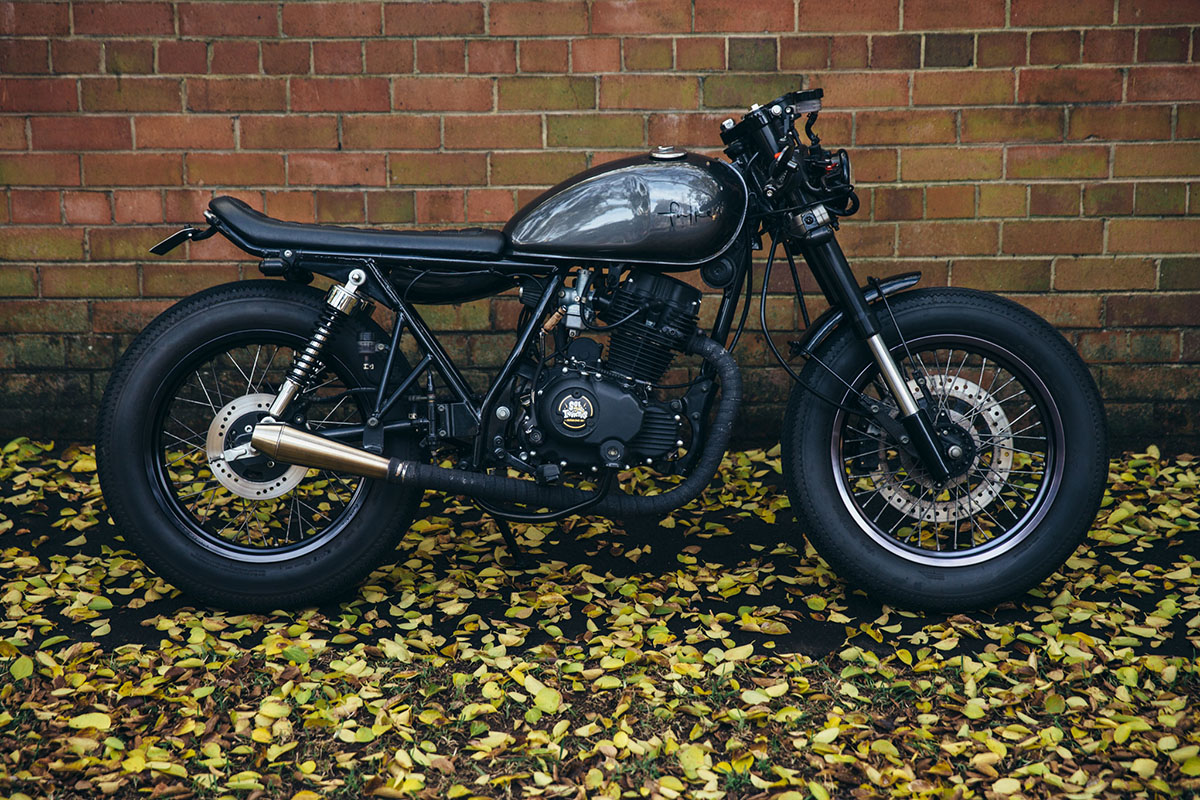 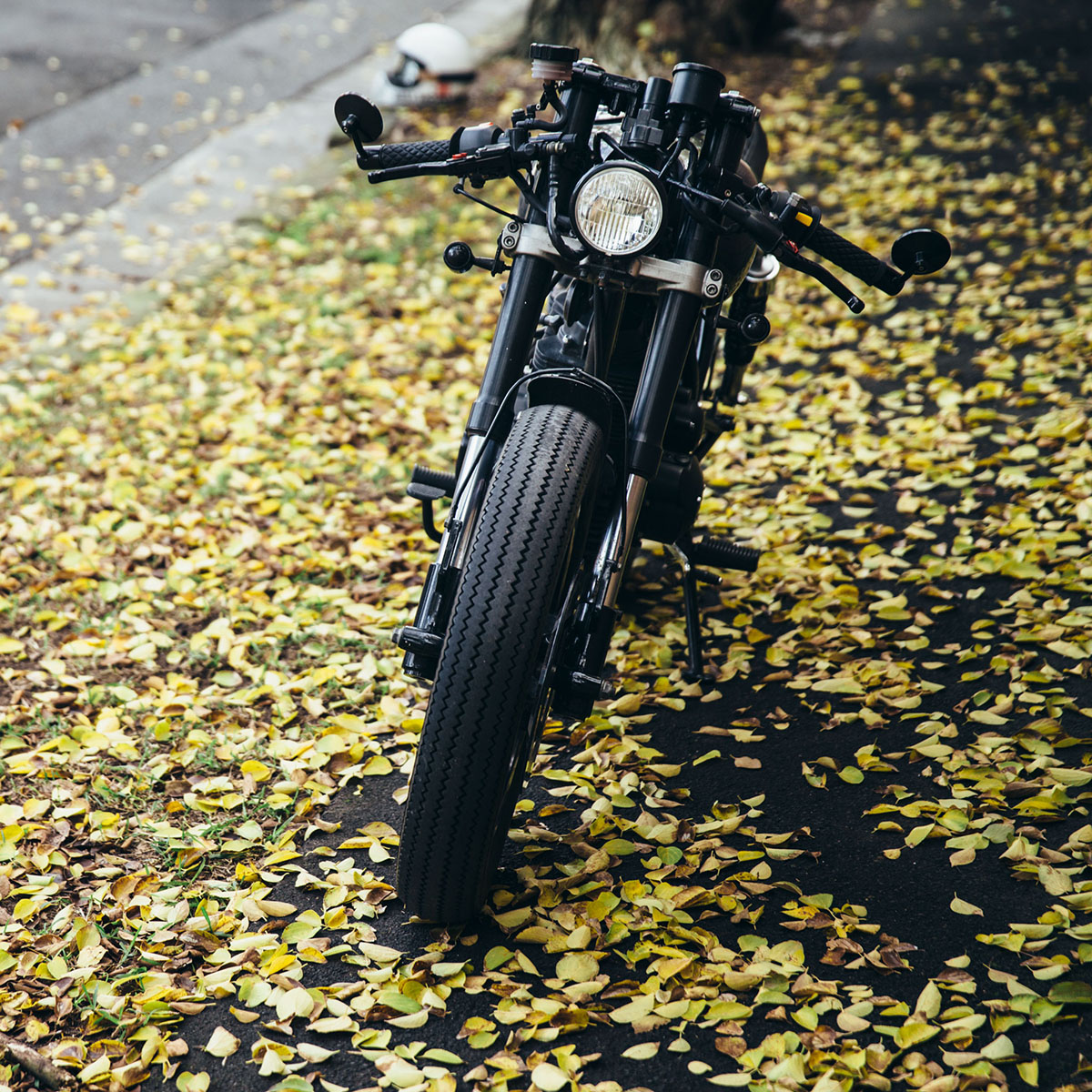 It would be a call from Adrian’s father that would cotton him on to the Sol Invictus Mercury 250cc bike. A fairly newcomer in comparison to other motorcycle brands, Adrian’s interest was picked. “Dad had stumbled across the bikes on facebook when he called me. Normally when your Dad finds something on Facebook, it’s too good to be true – but not this time. I ended up on the Sol Invictus website drooling over the simple frame lines and classic styling of their Mercury café racer. Like all my purchases, I spent weeks researching and weighing up the pros and cons of the product. Eventually I make my way into the store and test rode the bike, I instantly fell in love. I had to have it. So I purchased the bike that day!” 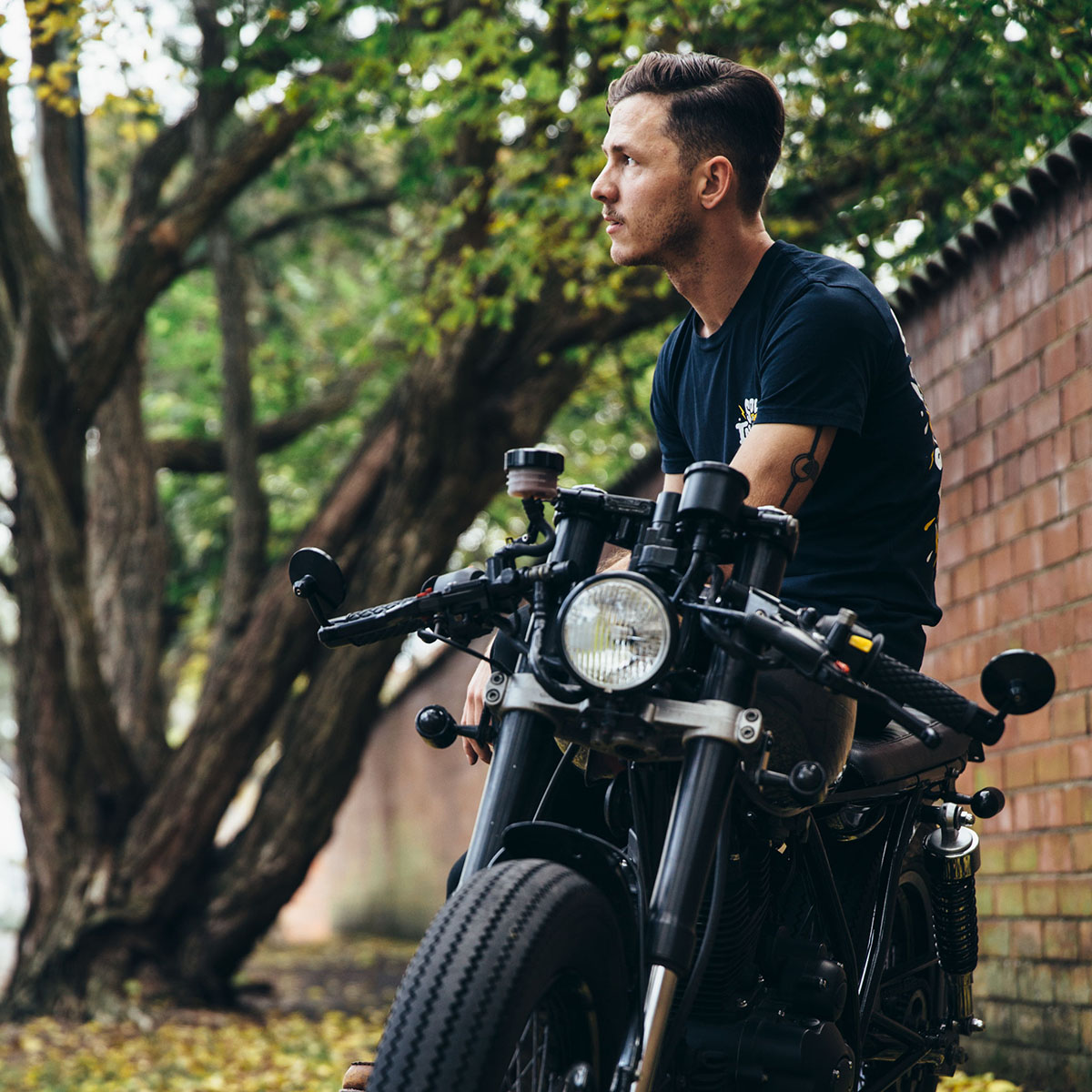 The first bike that Adrian had purchased was actually when he was a young fella at a garage sale with his Grandfather. “It was a 49cc pocket rocket in atrocious condition. Luckily, my grandfather was with me at the time and he assured me that even though the bike wasn’t running now, we’d be able to get it working fine pretty easily. So I parted with my hard-earned $50 (which was a lot when I got $2 pocket money a week) and took ownership of a broken, not running pile of metal and plastic that I was to call my first motorbike.” 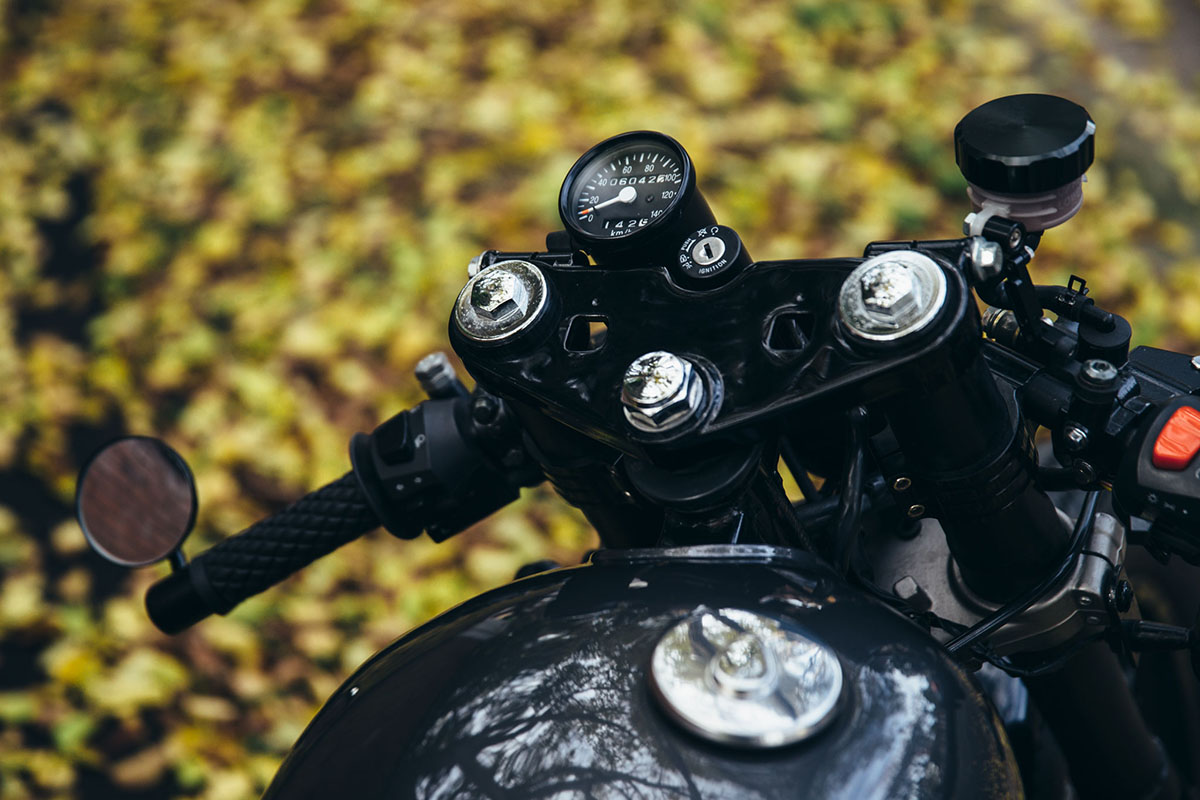 As it turns out, along with Grandpa’s knowledge, all that they needed was a new centrifugal clutch and a spark plug to get the little things running again. “This is where my love of bikes and customisation truly began. We then spent the next few weeks repairing the fairings, repainting the bike, upholstering a new seat and polishing the engine. When the bike was finally finished I rode this 49cc pocket rocket up to its top speed of 70km/ph for as long as I possible could until I decided it was time to sell it on.” 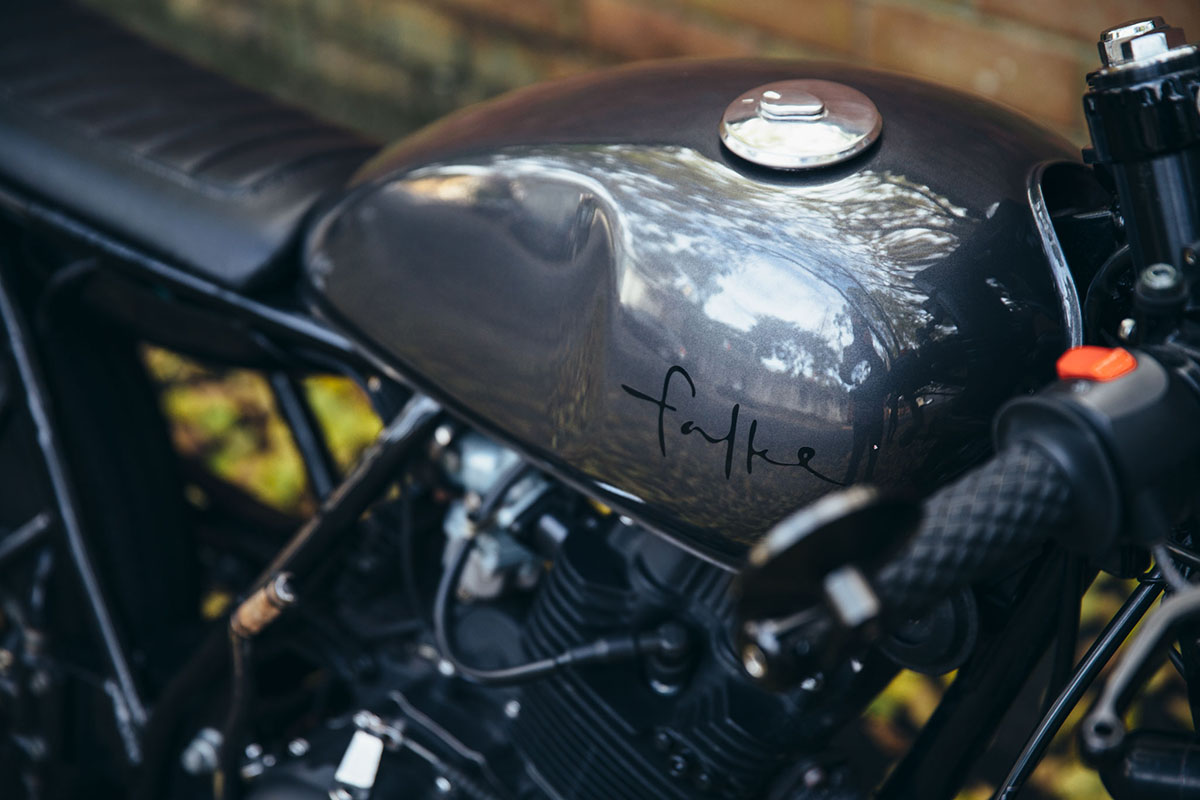 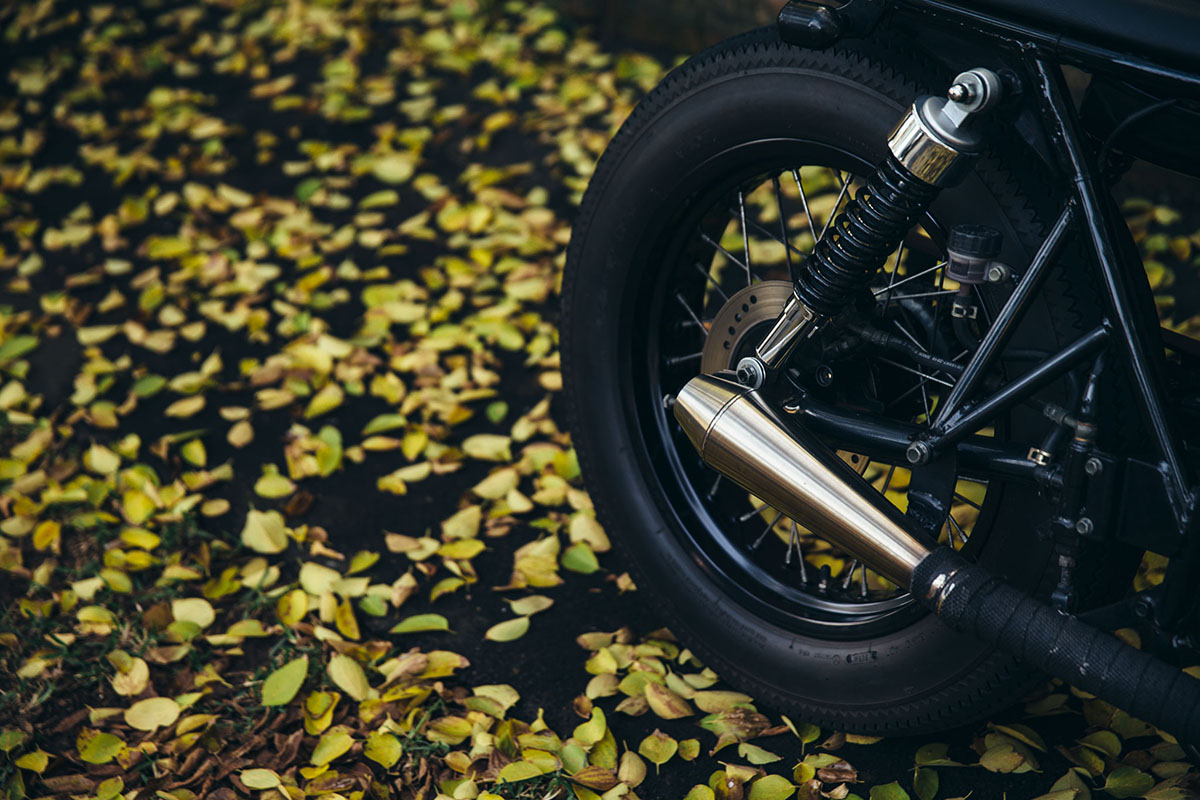 With a grin across Adrian’s face that would make the Cheshire cat look grumpy, the Sol Invictus Mercury was now home and in his possession. As soon as this brand new machine was inside his shed, the tools were out and the customisation began. “I waited a week before I could get the bike home, so I made good use of that time ordering a tonne of parts. First to go were the mirrors, which were replaced with some slim-line bar ends. The indicators came next as they were rewired with all black steel versions that were much less obvious on the bike. I removed the decals, changed over the bars for a set of low clip-ons. This was all within the first hour of owning the bike!” 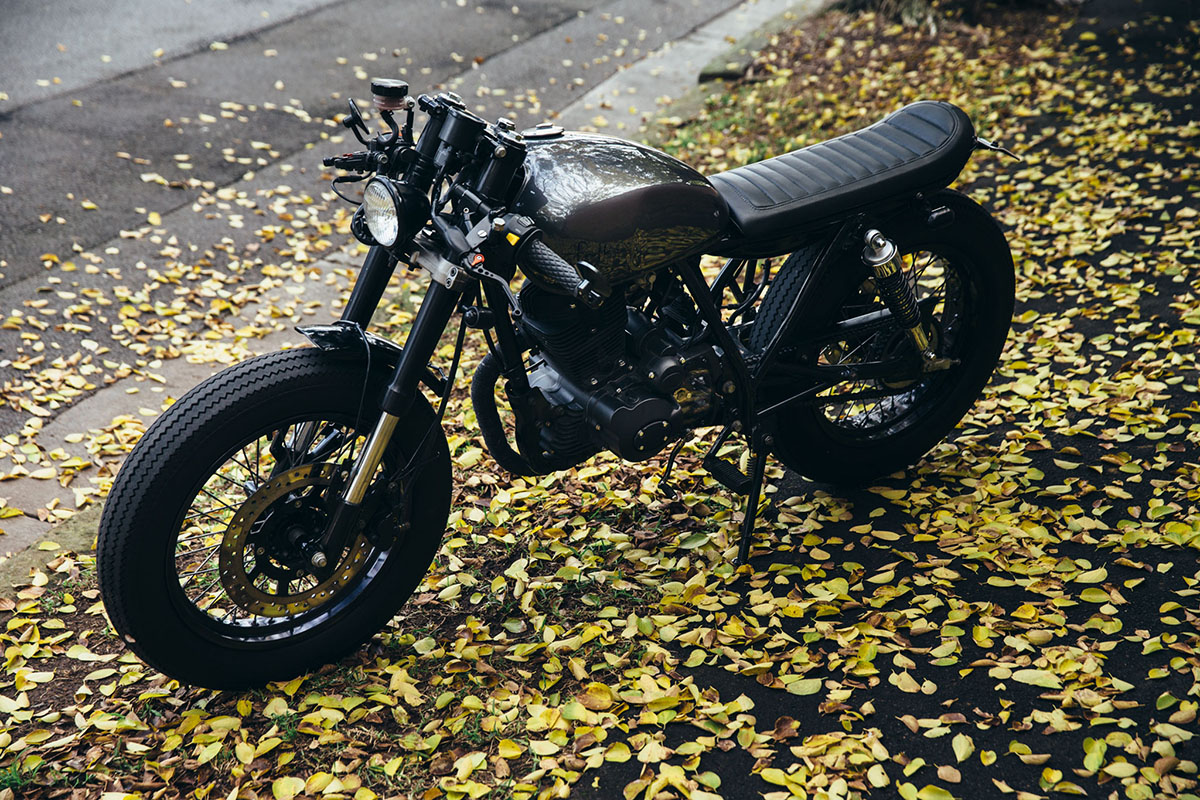 The fuel of inspiration would come from a 1978 CB750 that had been built by Clockwork Motorcycles. This build was stripped back, as black as night, and was playing the minimalist approach. “This was more than a bike for me, it was a work of art. I wanted to created a bike that evoked the same emotion, something that was beautiful to look at while also being fun to ride. It was a tricky thing for me, because I am a very visual person, but I’m not great at drawing or articulating myself. It took me quite a while to actually get my ideas out of my head and into a physical sketch that I was happy with. Once I had this, it was easy (albeit time consuming) to translate this onto the actual bike.” 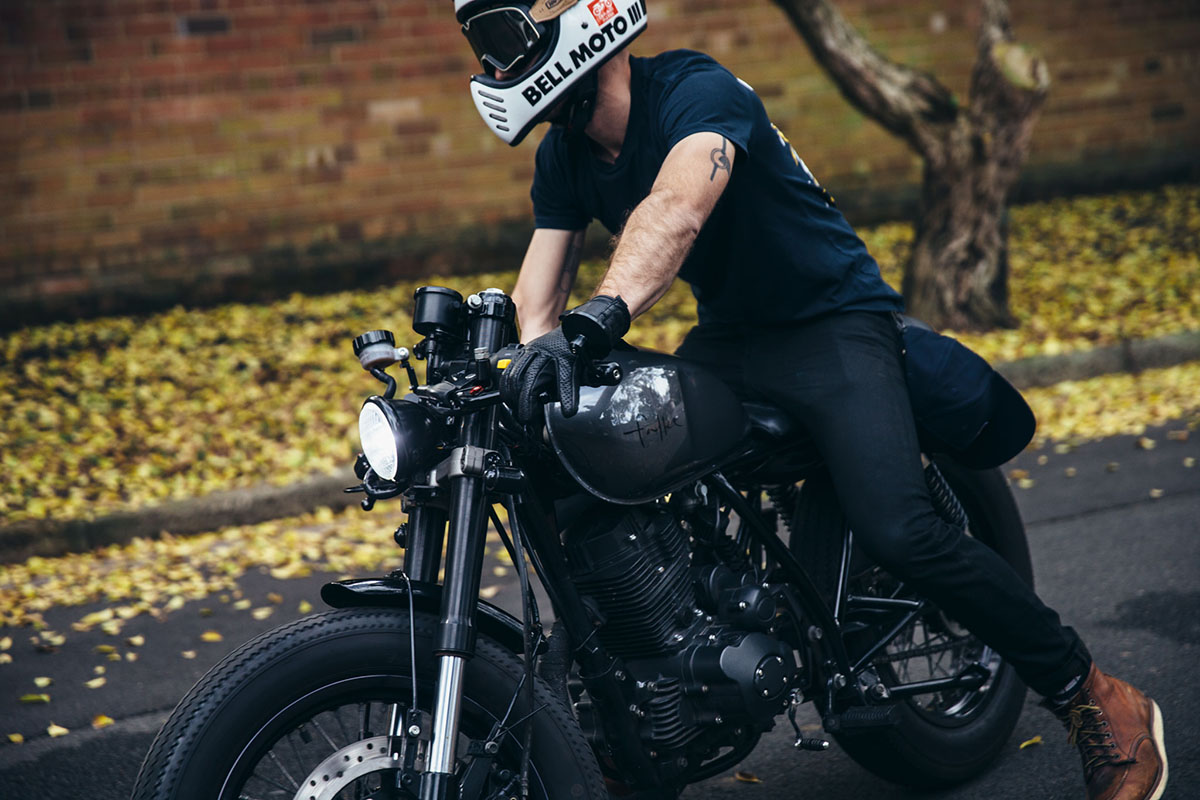 “Building my bike was kind of a process of what I could afford as I went. A few parts were immediate (mirrors, indicators and bars) but others were little steps over the course of a few years. The mirrors, indicators, clip-ons and grips were a quick change as they did not cost to much and they were not too complex to do.” 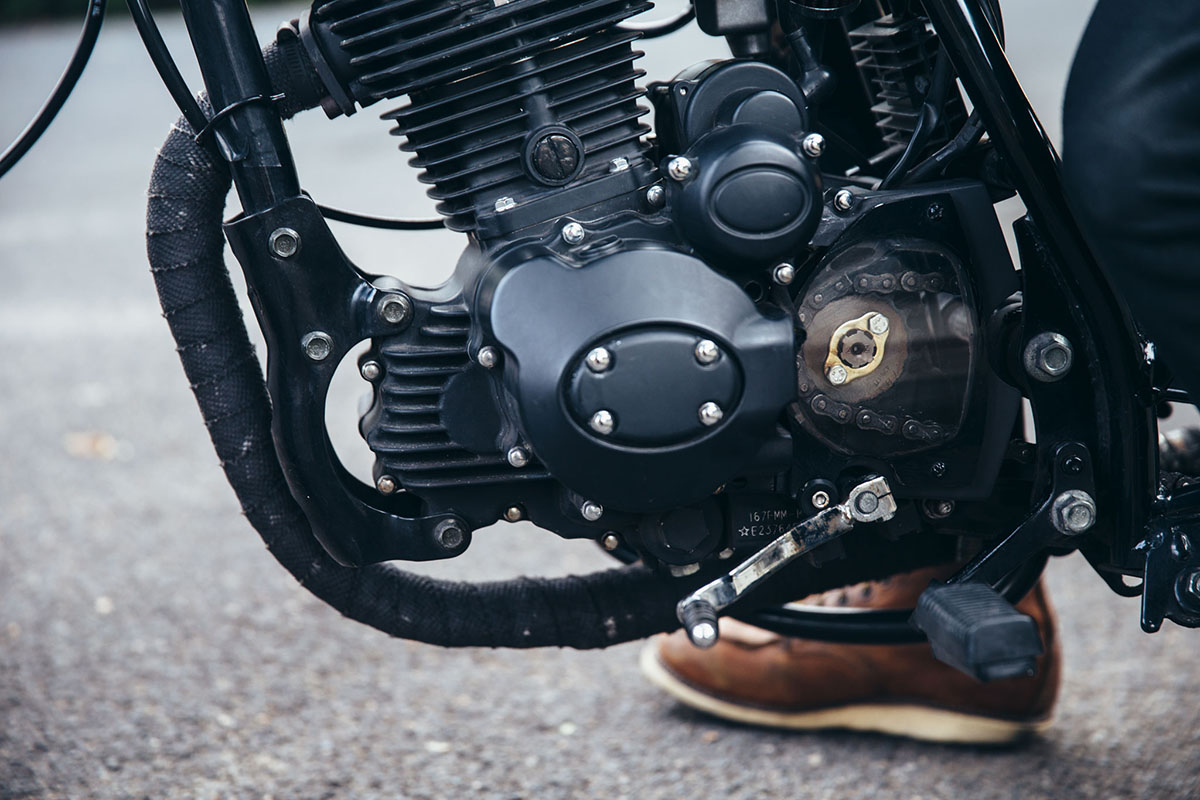 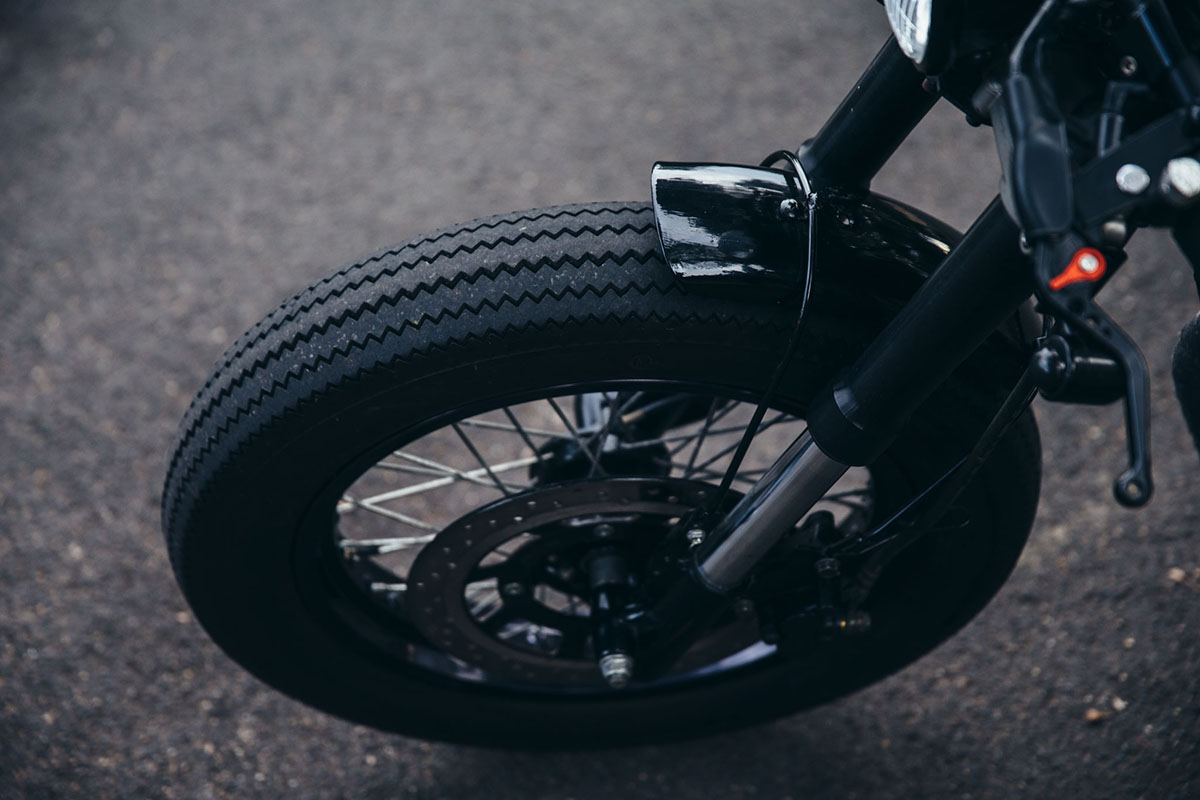 The next step in the bike’s transformation would be the exhaust. After owning the bike for a few weeks, Adrian naturally grew to hate the silent stock exhaust so he started looking for something with more excitement. “As I couldn’t decide on a pipe for a while I just got out the angle grinder and cut off the stock muffler and rode without a muffler at all. This quickly annoyed my neighbours and started to cause frustration wherever I went so I decided I needed to do something about it. I purchased a matt black ‘hotdog’ muffler that slipped onto the end of the pipe. This did practically nothing, as it wasn’t baffled in the slightest. After this I was stumped about what to do about it. About a year later I discovered the Dime City Cycles Mini Reverse stainless cone. I fitted this properly, welding it on and properly baffling. While this didn’t really make the bike quieter, it did give it a much more pleasant sound.” 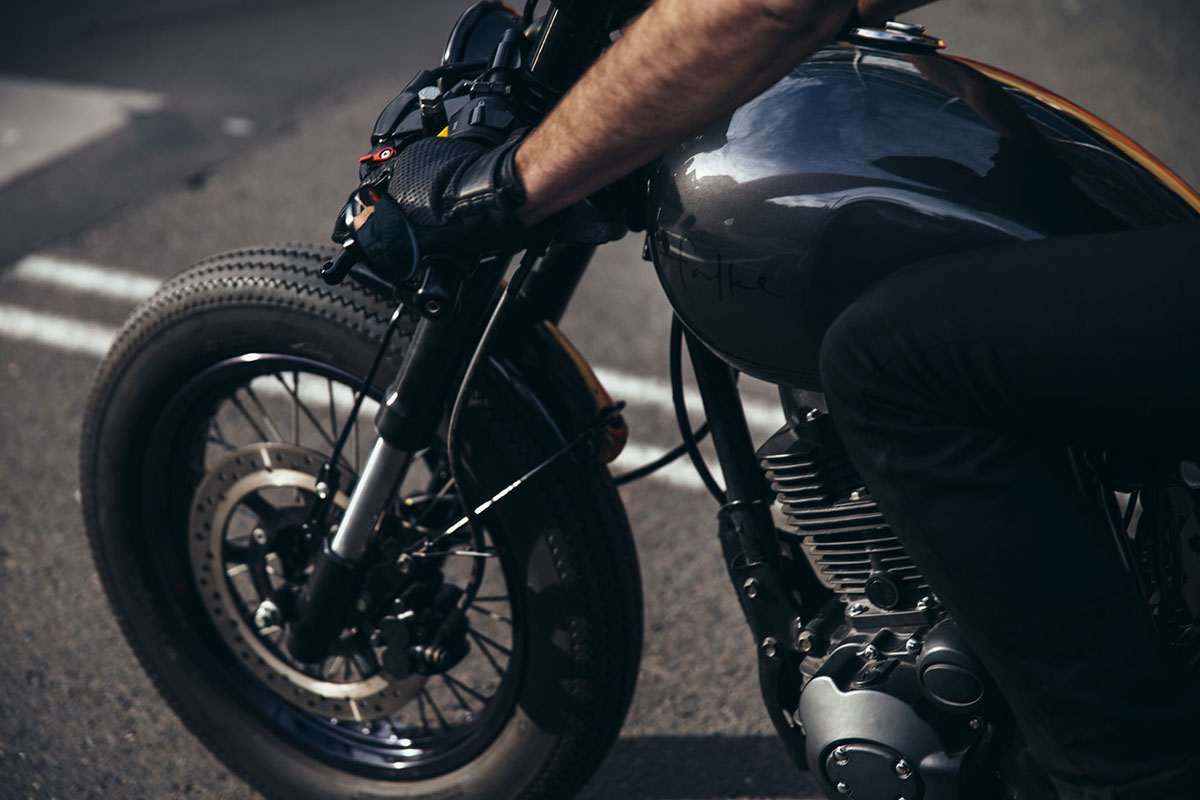 Soon it would be time for some other hands to have their turn on the project as Adrian’s skill set was met. This would be a task for the legends at Gasoline Motor Co. The tank would be given a fresh new paint job, a mini bates headlight bracket welded and installed, new speedo, top triple risers machined down and repainted, a battery elimination and some pod filters. “I wanted the bike to have a decal that was similar to the style of Kott Motorcycles but with my own twist. I loved my girlfriend’s handwriting, and the name ‘Falke’ (Falcon in German) so I got her to write it out for me about a thousand times before I chose one that would be set to the tank.” 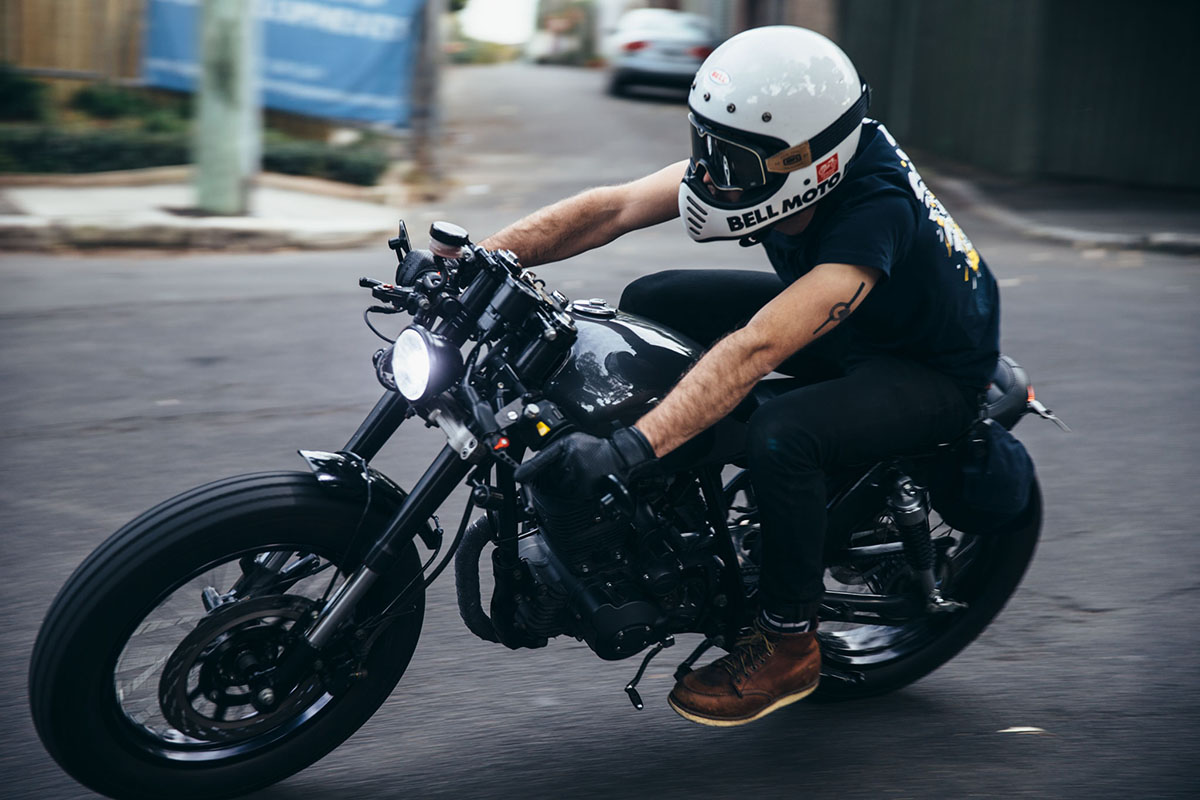 “ I love so many things about this bike, but if I had to choose two it would be the general confusion it causes everyone who sees it, and the line from the tank through the seat.

I can’t recall how many times people have come up to me to compliment me on my great SR or my beautiful old CB. Falke seems to have this great illusion whereby people can never figure out exactly what my base bike is which always opens up a great conversation.“ 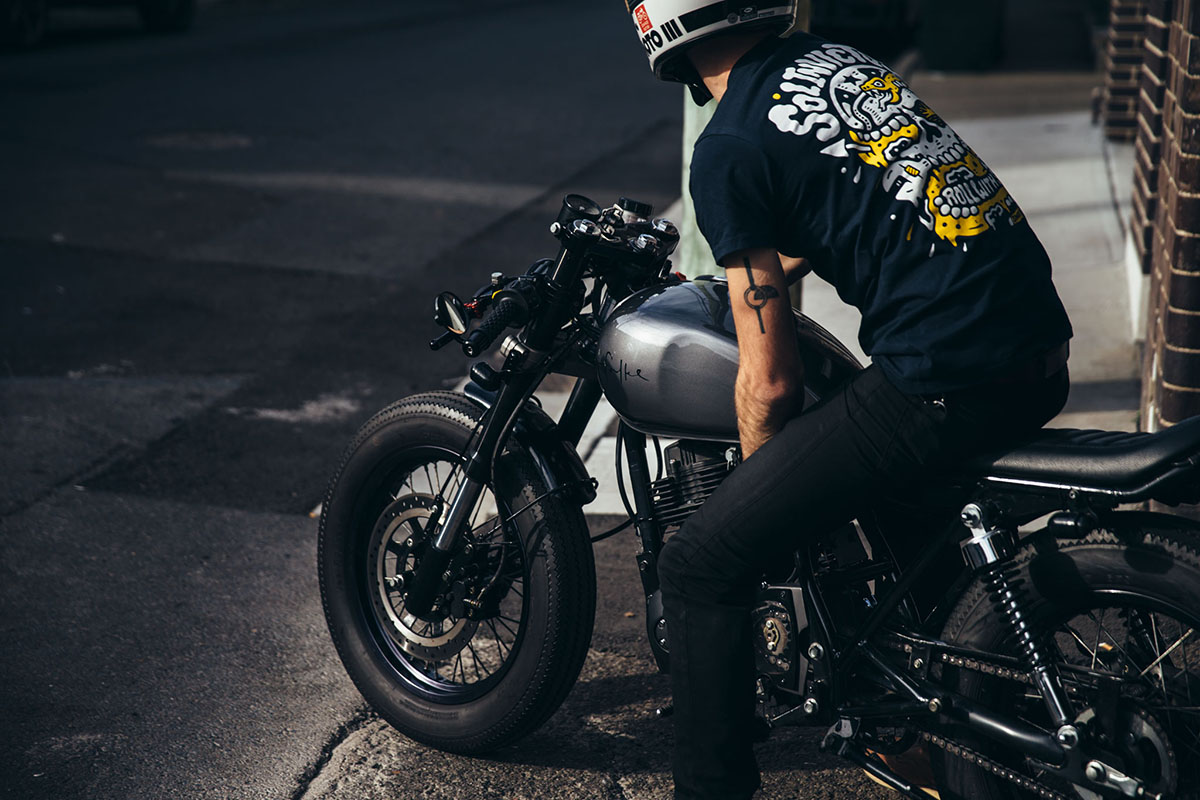 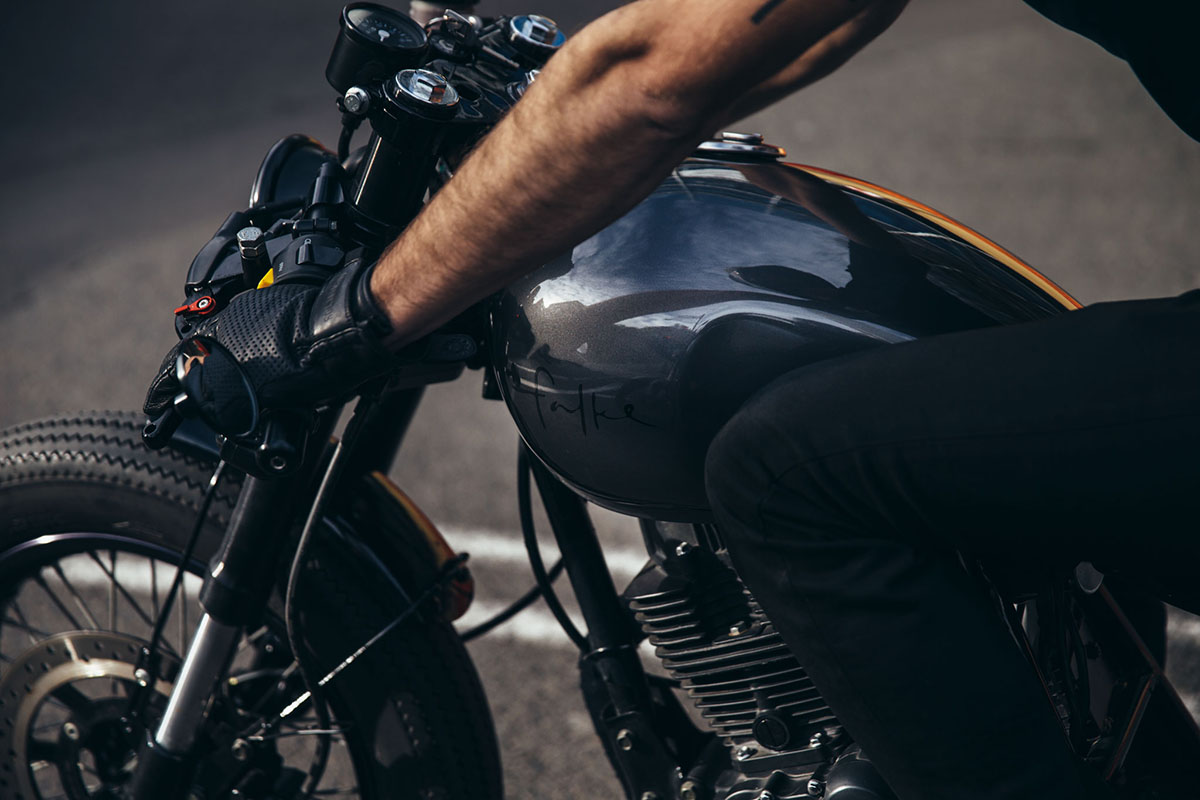 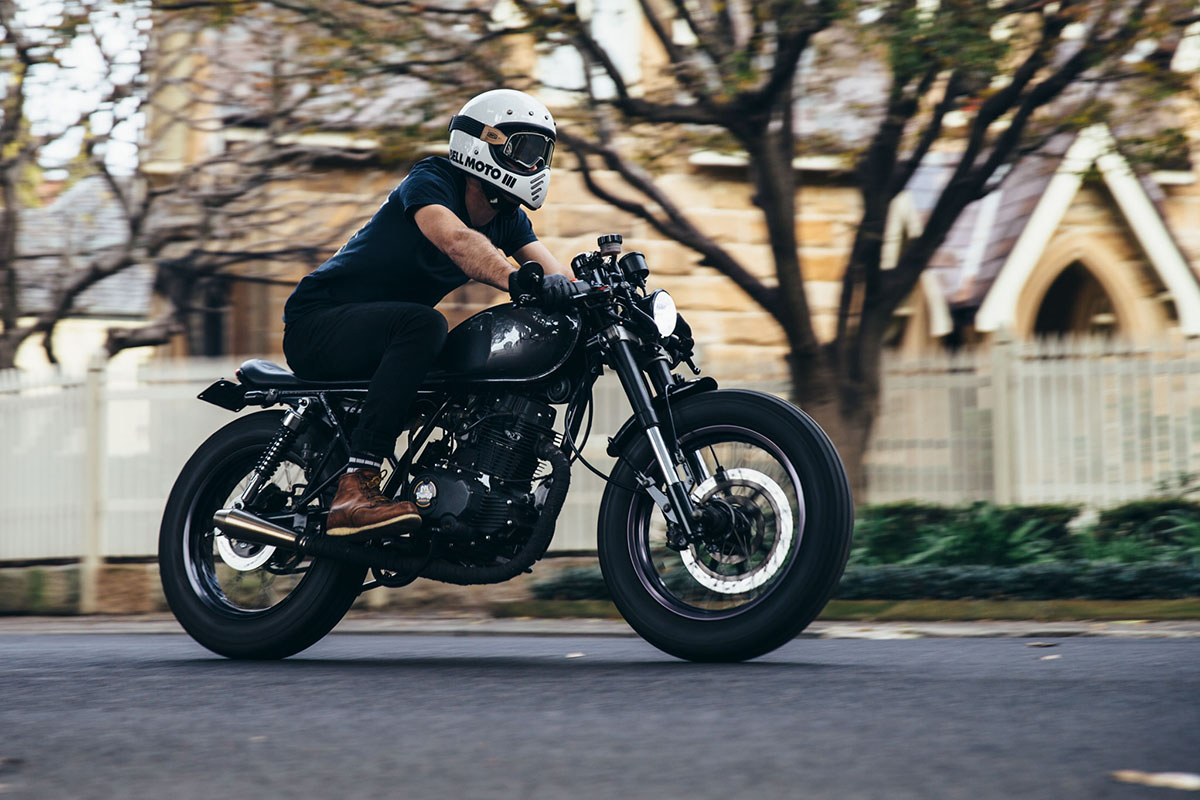 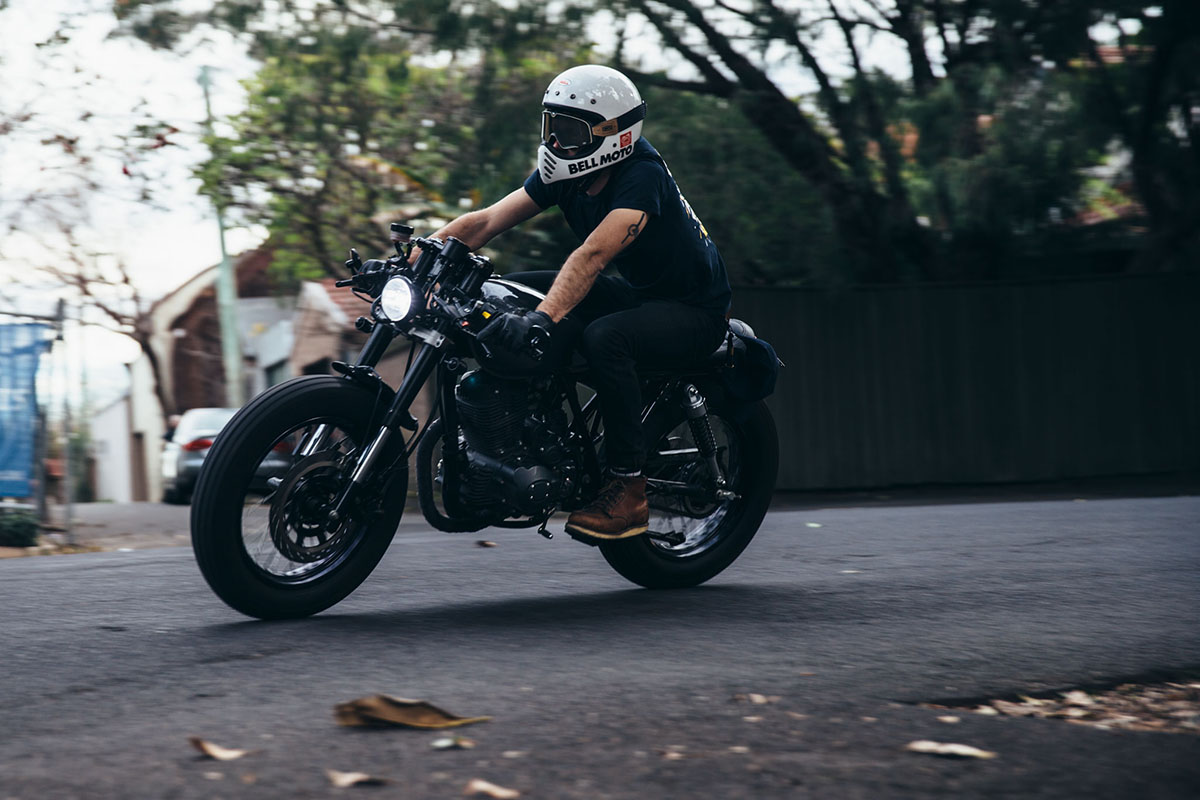 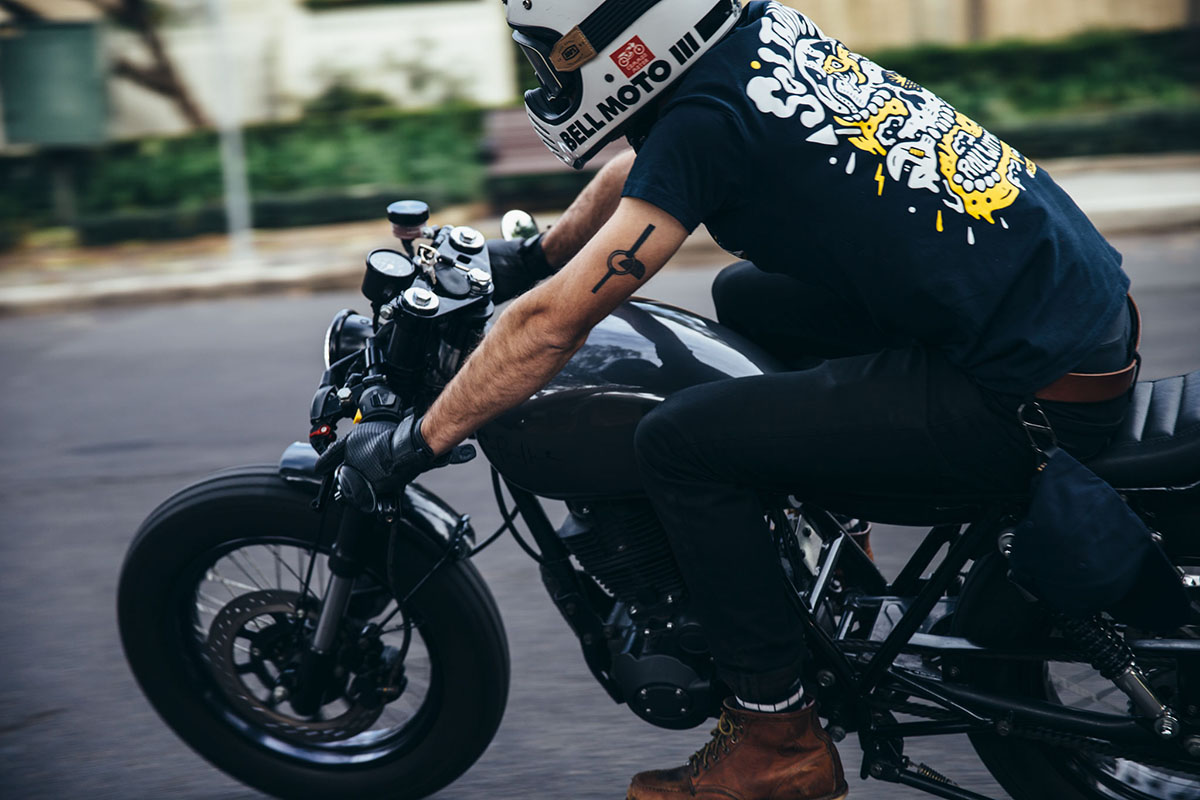