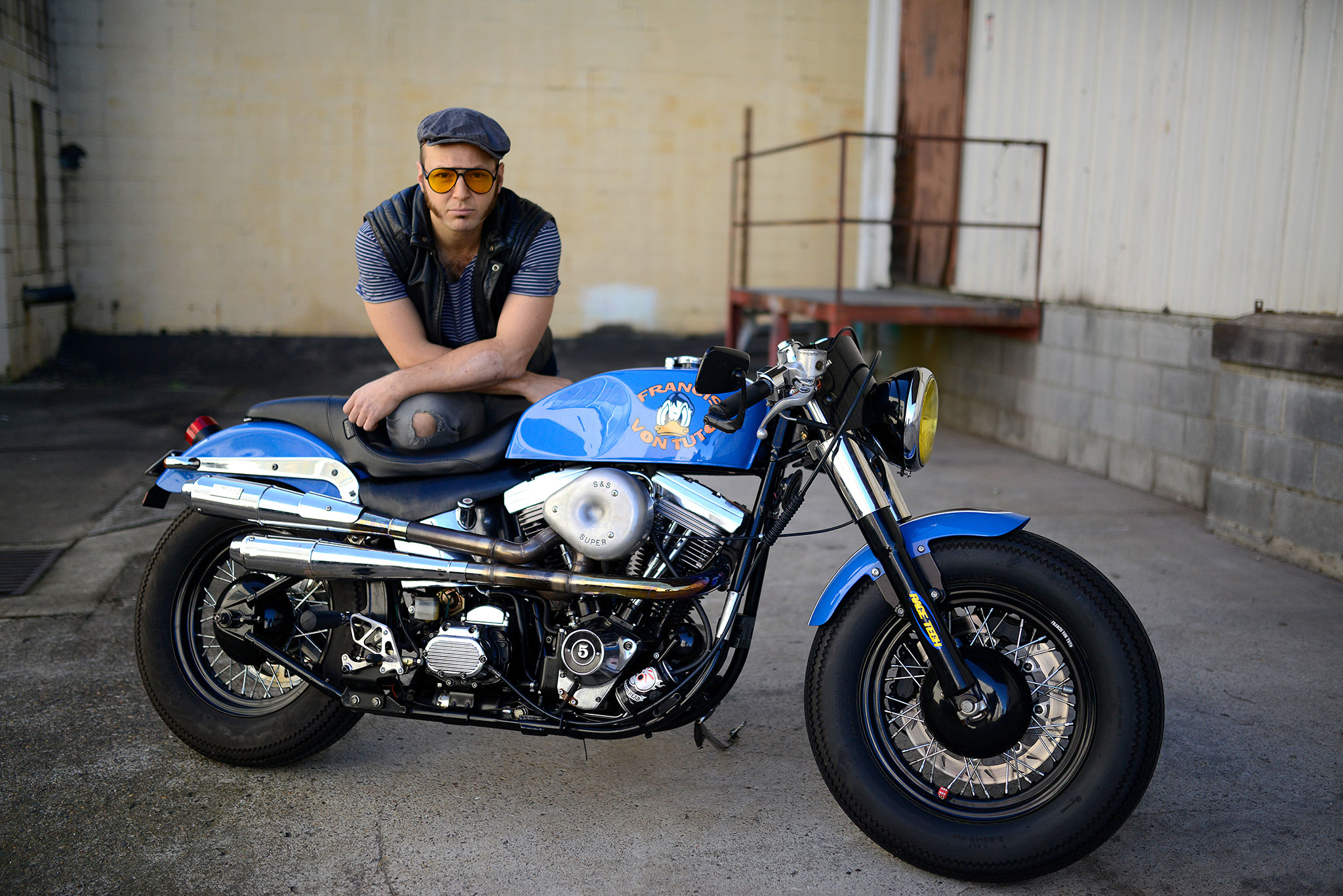 Born and raised in Italy, Francesco started riding bikes as soon as he could afford them. After many different machines over the years, and a change of country, Francesco now has an incredible Harley Café Racer. 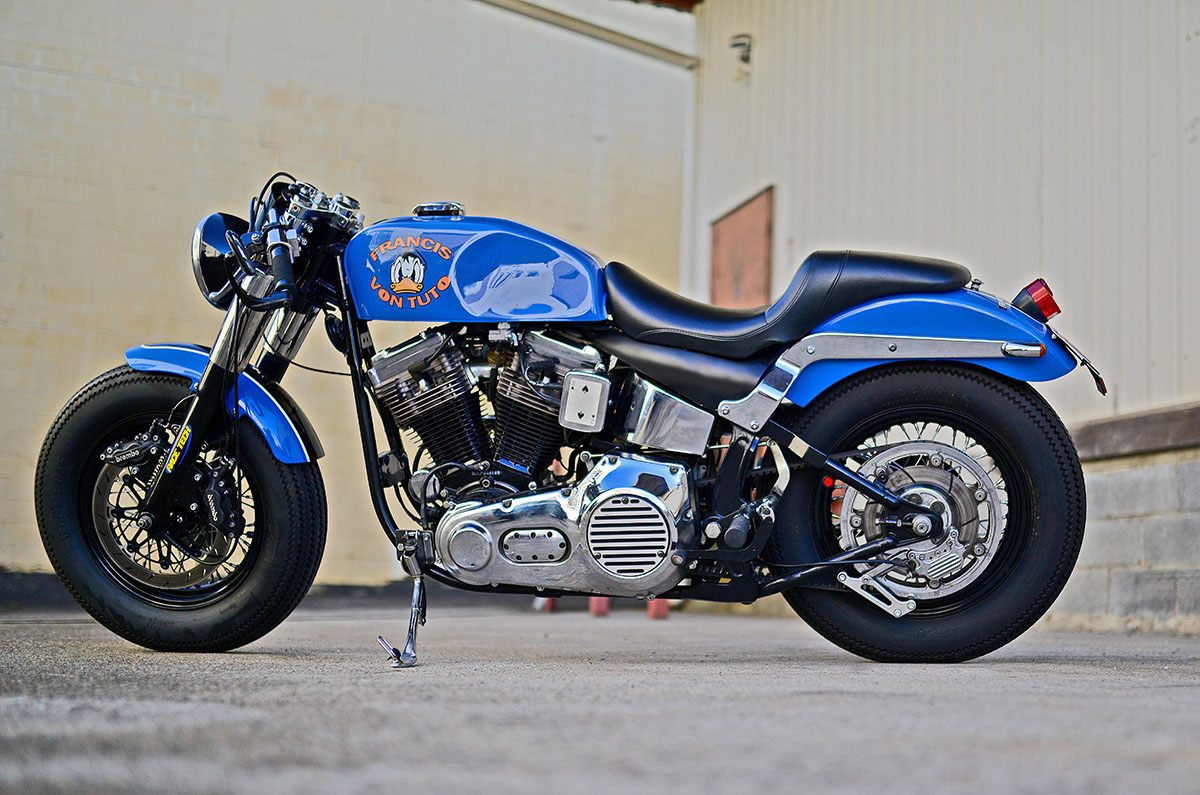 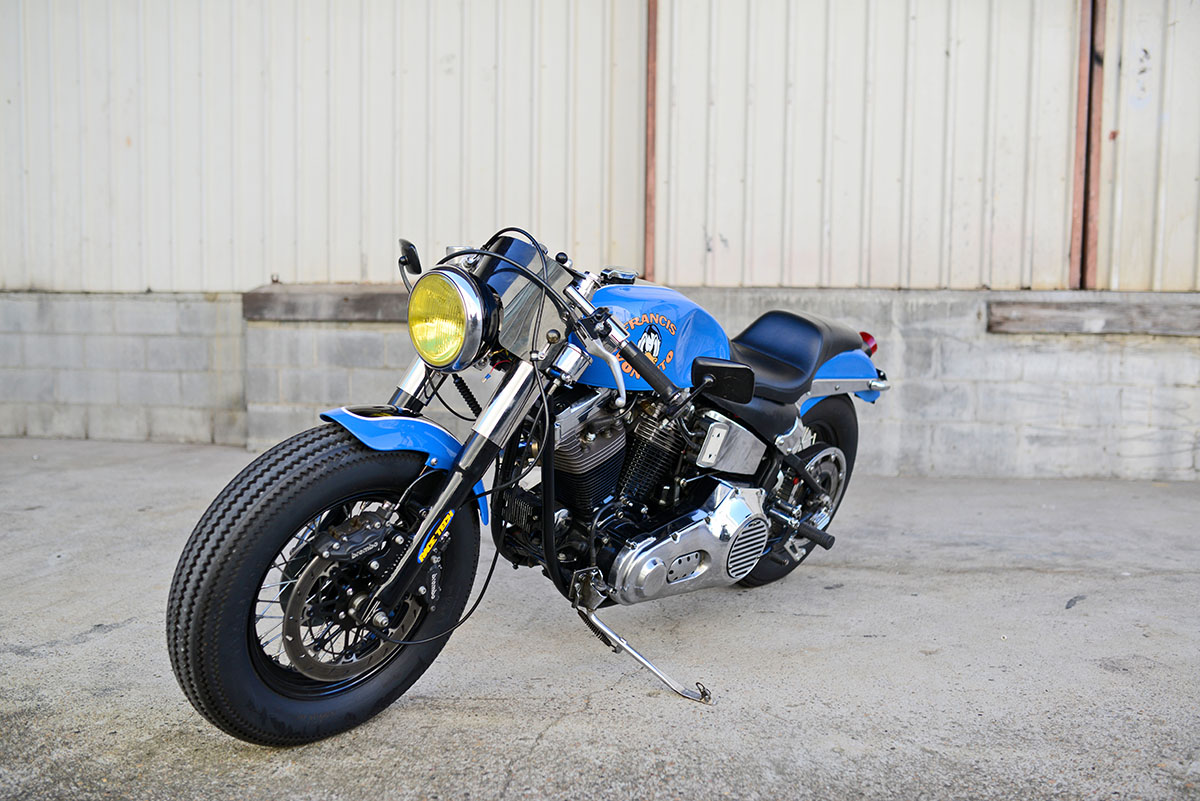 Since Francesco was young, he’d be drooling over old cars and every sort of bike he saw. “The problem was however, that my Dad never liked the idea of me on two-wheels. I spent years begging for a moped, a Vespa, anything! Whatever had wheels and an engine but got nothing. I could only buy magazines and keep dreaming about choppers, café racers, and race bikes. Then at the age of 16 I started working for an ex-pilot and road racer who trained me as a motorcycle mechanic, and with my money saved I finally got myself a bike. A 1997 Aprilia RS125 off a friend, and since then I’ve never stopped riding.” 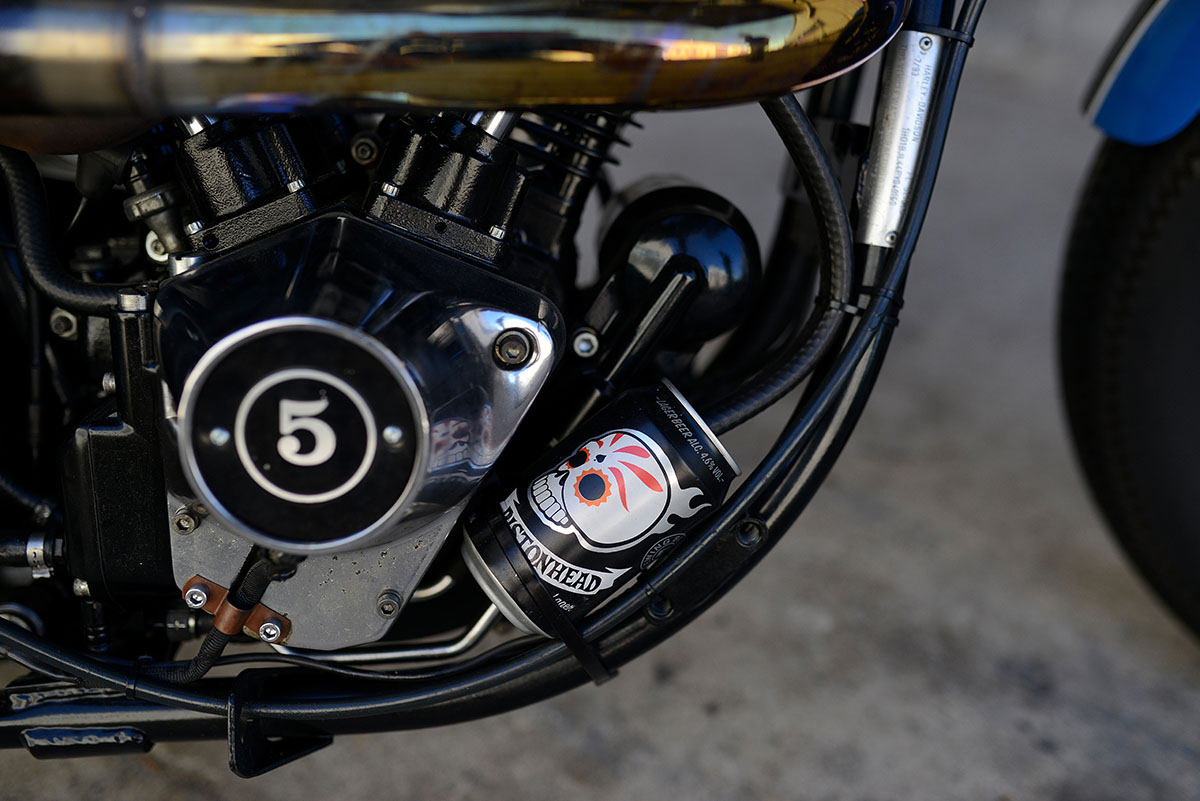 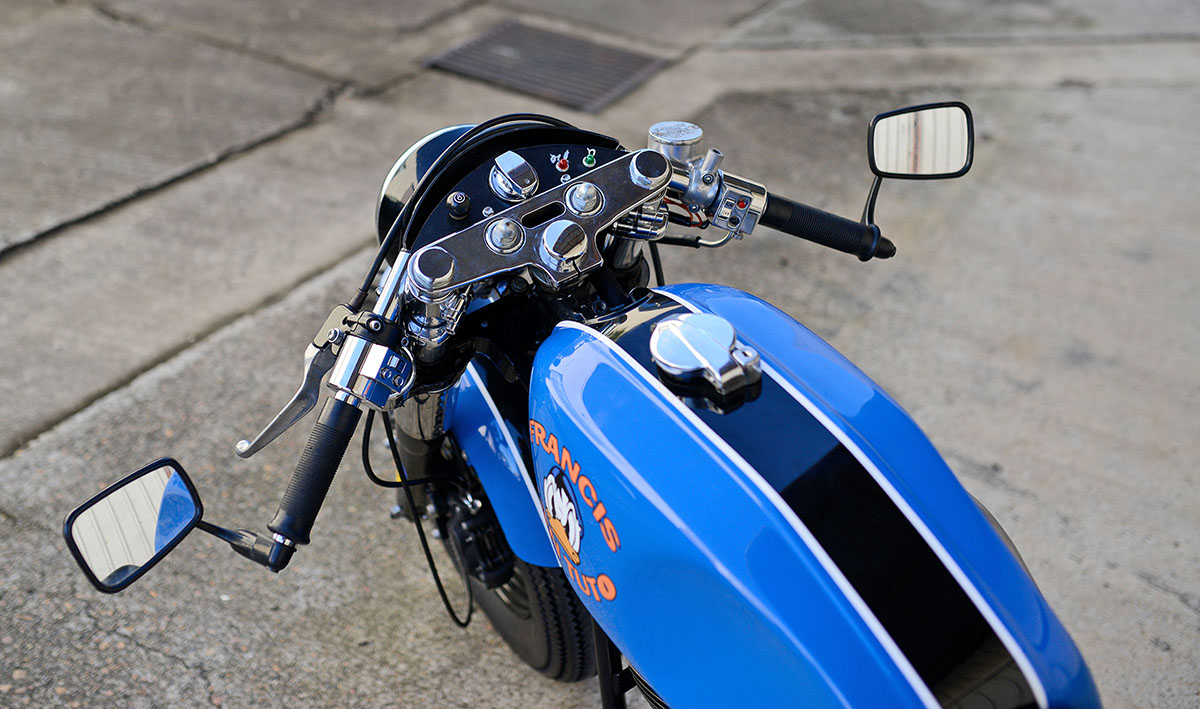 Now settled in Australia, Francesco was itching to get another set of wheels after a tortuous hiatus from his one true love of motorcycling. The craving for riding sent him to Gumtree where he would go searching for anything that was below grand. “Then popped up an ad for this Heritage Softail Evo in Brisbane for a fair price. I thought about the Ironhead I had to sell back in 2008 due to the financial crisis, and so then drained my pockets to the very last cent and got myself this wide and low Harley.” 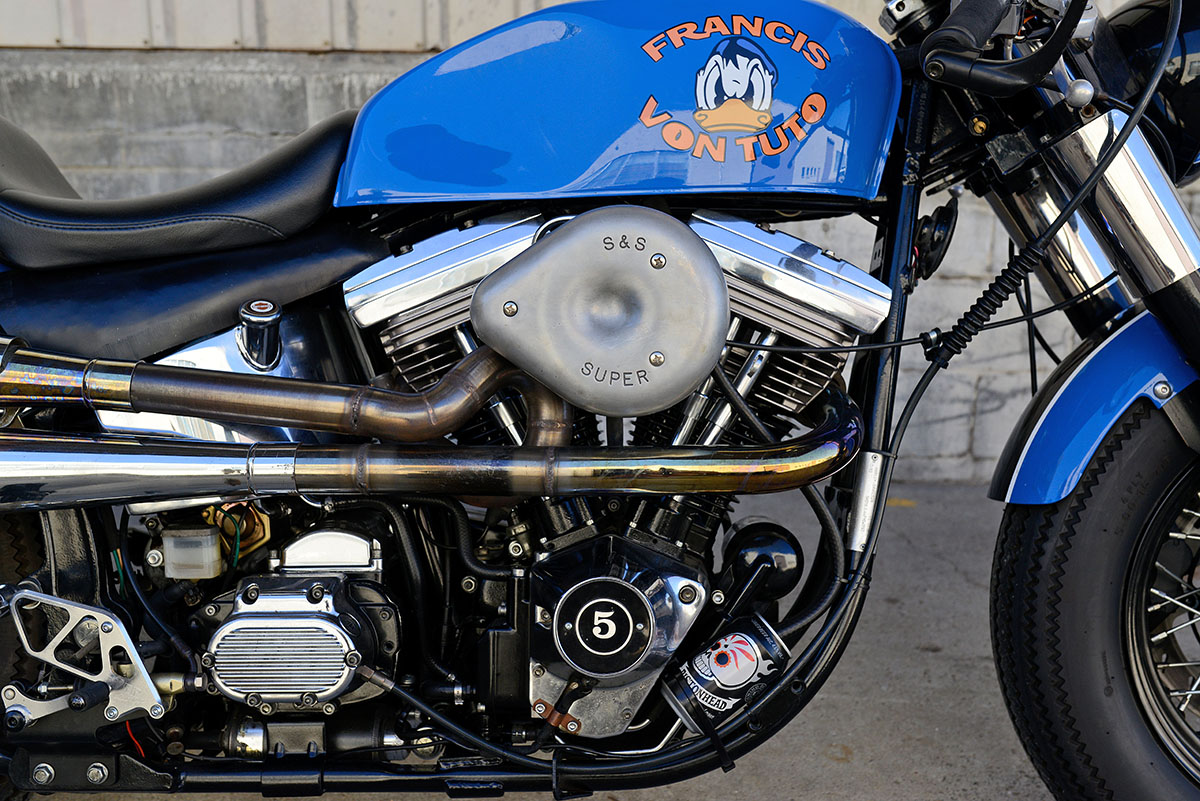 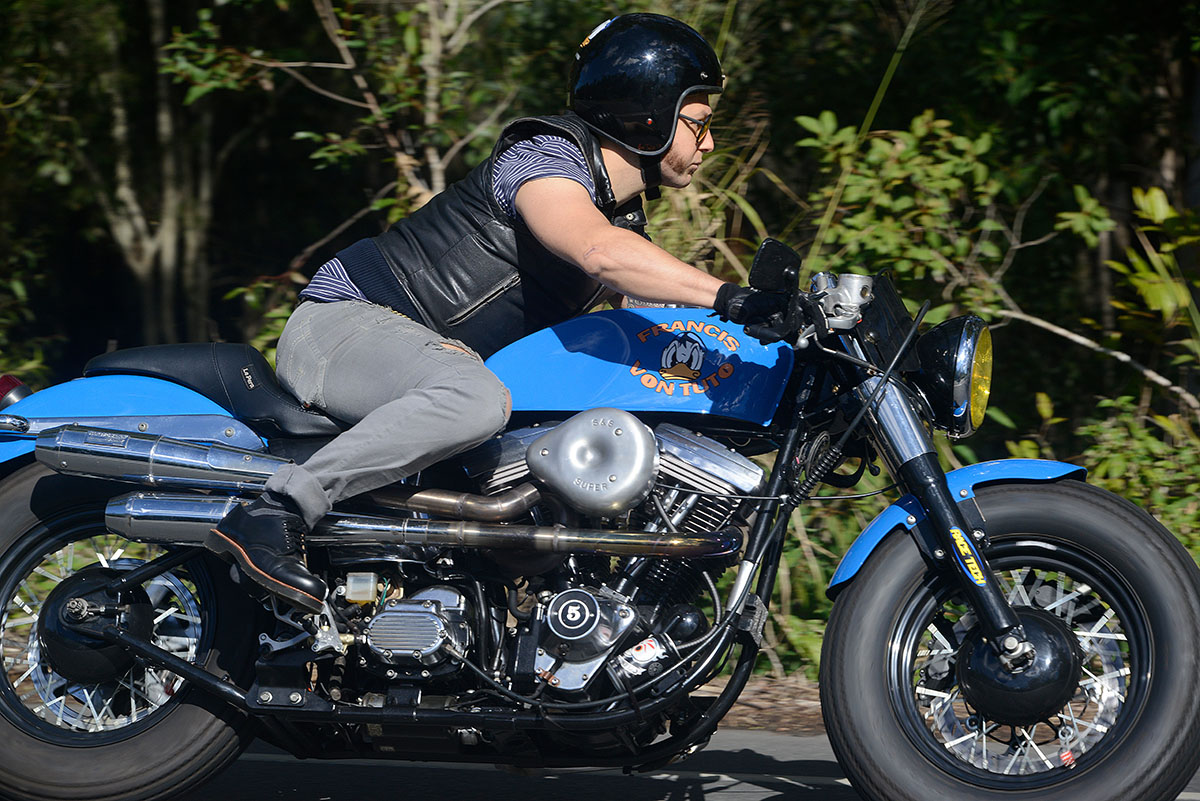 The bike arrived stock standard, but Francesco was soon to modify it for his own needs, with the bike starting to form a Bobber aesthetic. “I was riding the bike like a sports bike, and one day while I was dragging the hell out of the long chassis on a ride, the front end slipped and I ended up under a guard rail while the bike hit a pole. My head went straight under the guardrail blades, a metre further down and it would have been a lot worse! So after that I got thinking about how I could make the bike more rideable for the kind of work I’d be putting it through, you know, raise the pegs so they don’t scrape all the time etc.” 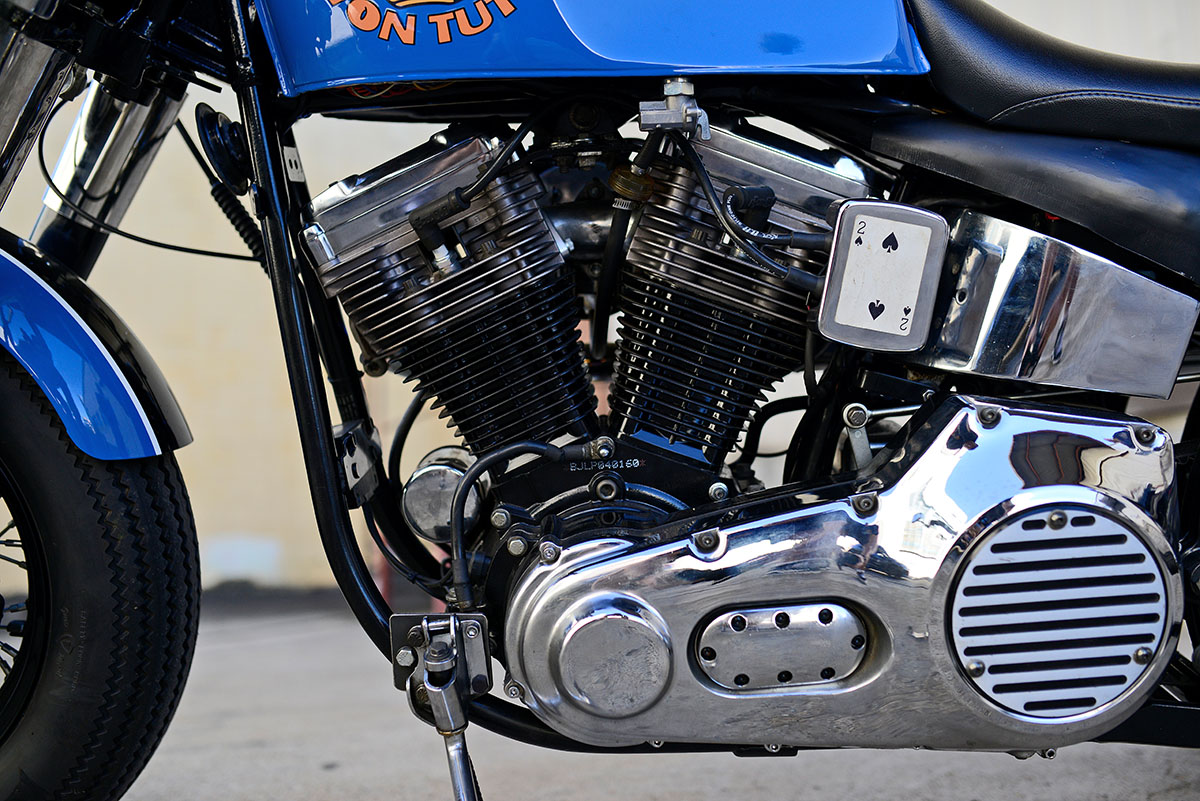 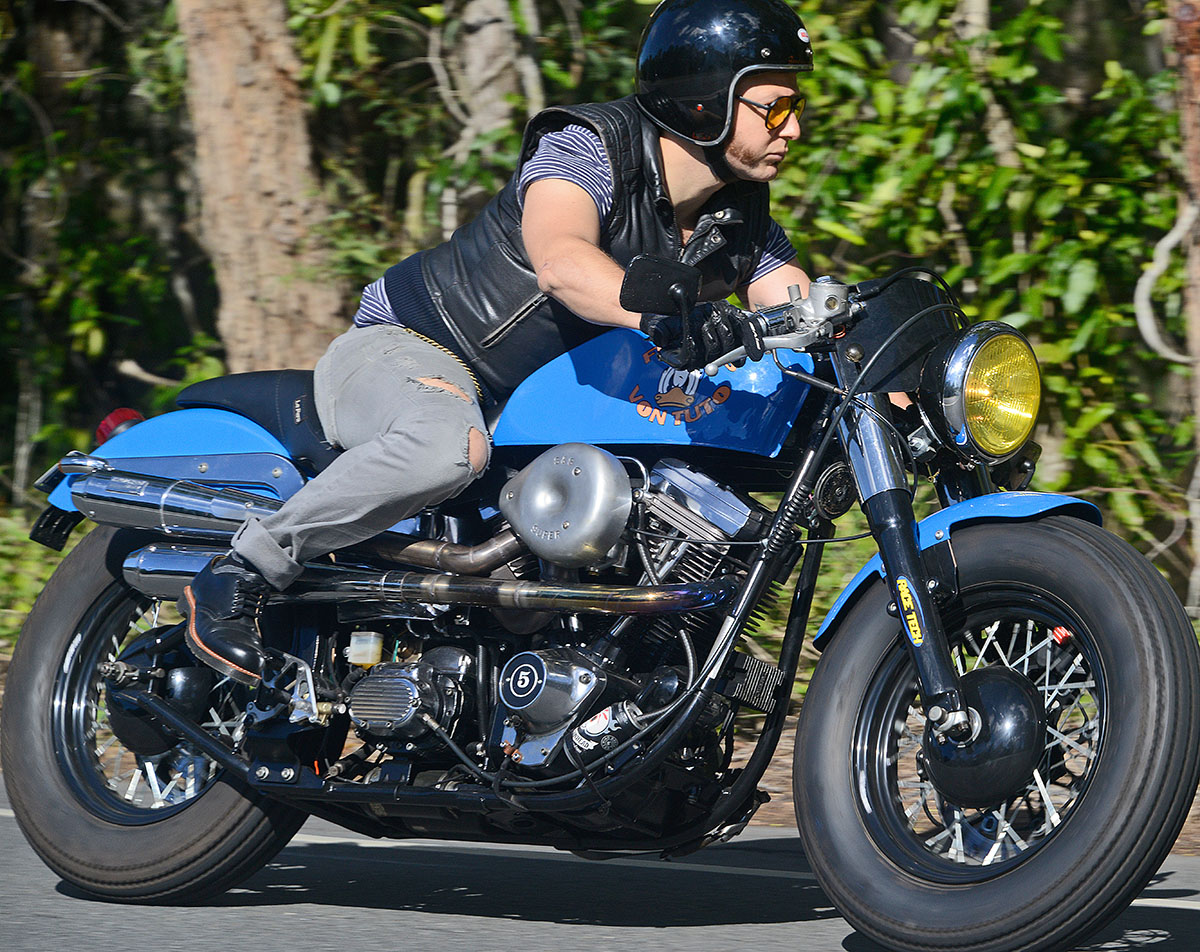 After the accident, Francesco’s bike was now essentially a blank canvas with which he could create whatever his mind and ability allowed him. “I know that Harley’s in general aren’t a good start when you want cornering and to be efficient through winding roads, especially the Softails, but this was my machine and I love a challenge!” 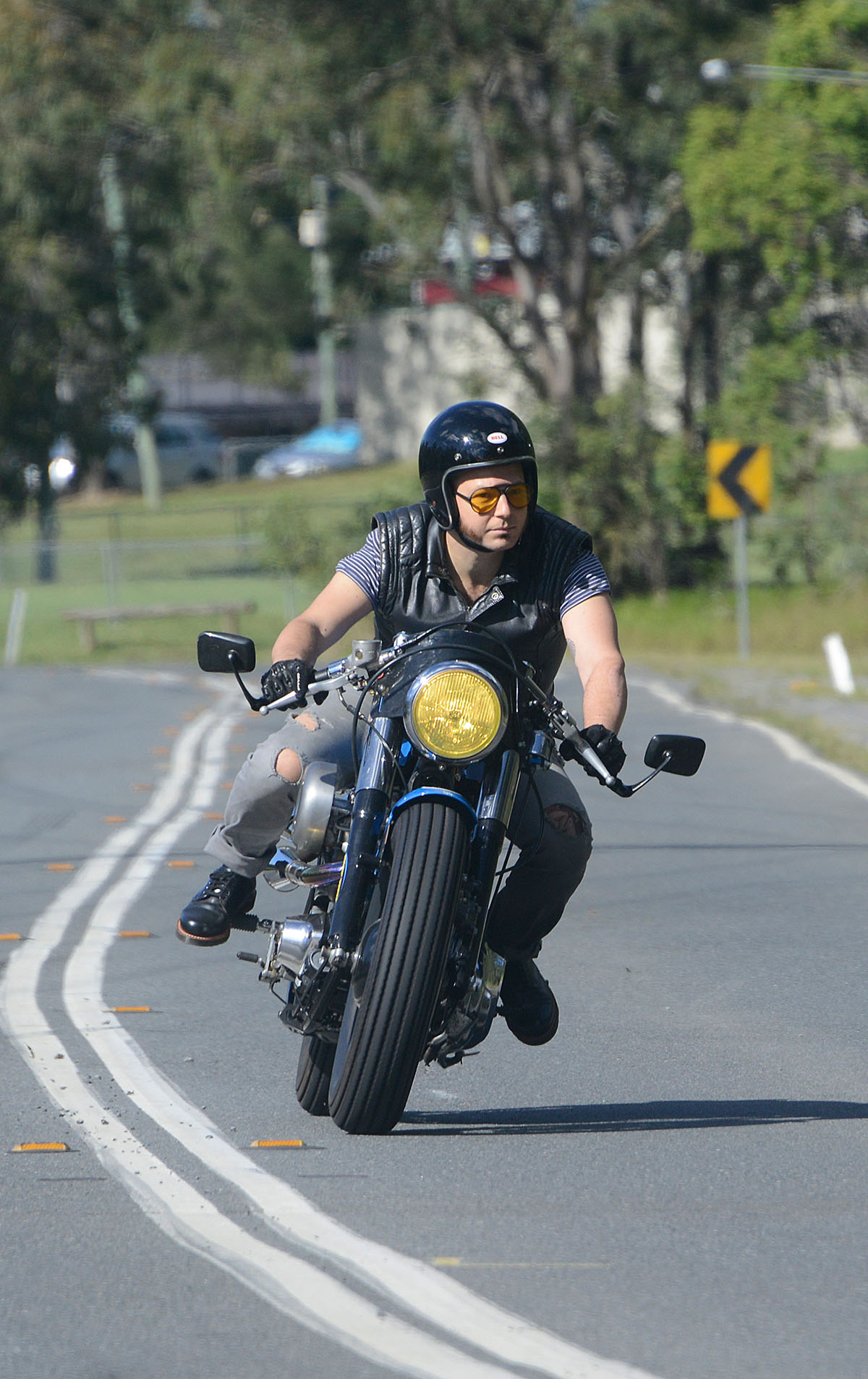 And so the challenge would be to turn this big arse classic style heritage cruiser into a stripped now, nimble café racer. “Café racers have always been my favourite style of custom bike because you can bond retro/classic style with race oriented solutions, (clip ons, rear set, single seat, improved suspensions etc) and this movement started as garage made modifications, so it sounded perfect to me.” 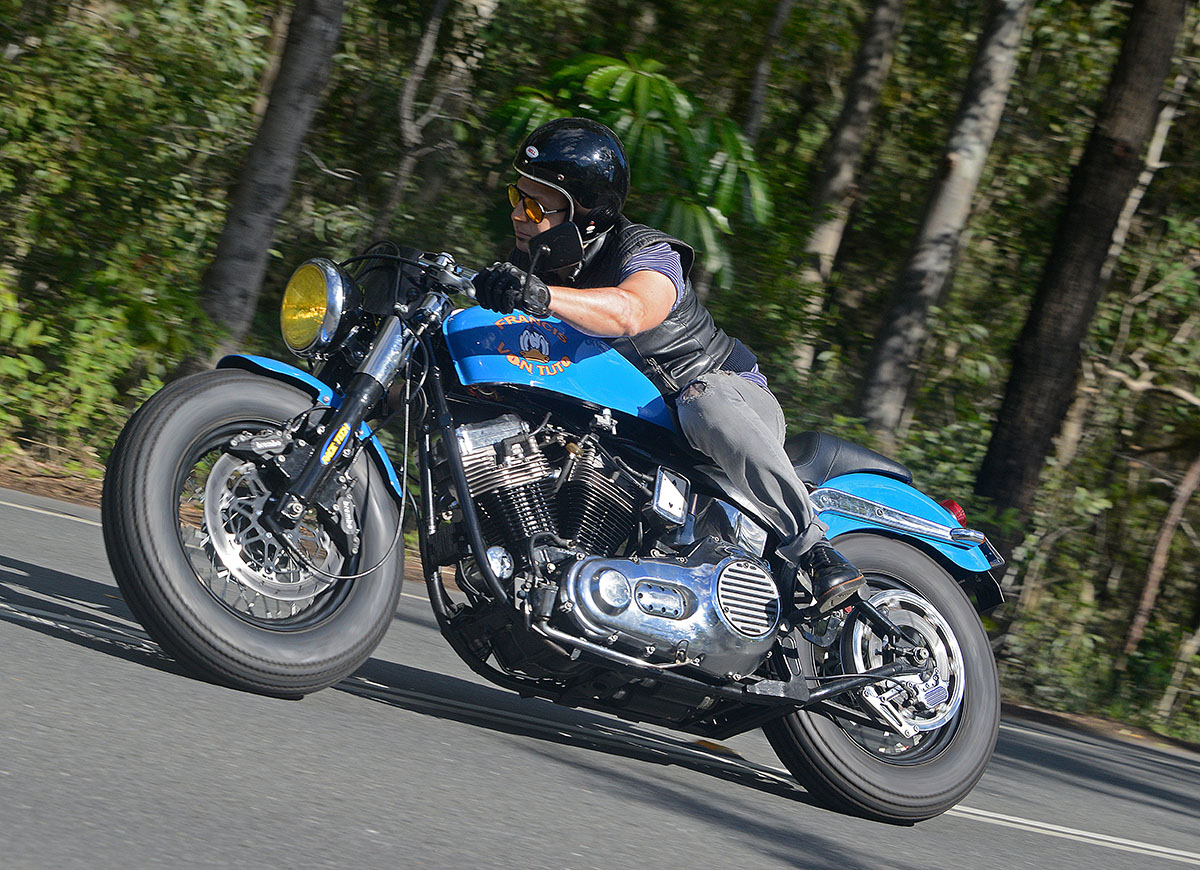 “The Harley needed a full strip down, but at the time I only had a car spot to work in so I started removing the damaged parts, tins, suspension, engine and transmission out down to bare frame. I cleaned everything thoroughly, classifying every piece and storing them in boxes in my share house room. Luckily 6 months later when the rolling frame was together and I had all the parts to rebuild the engine, I’d moved in another share house but this time I had a real garage.” 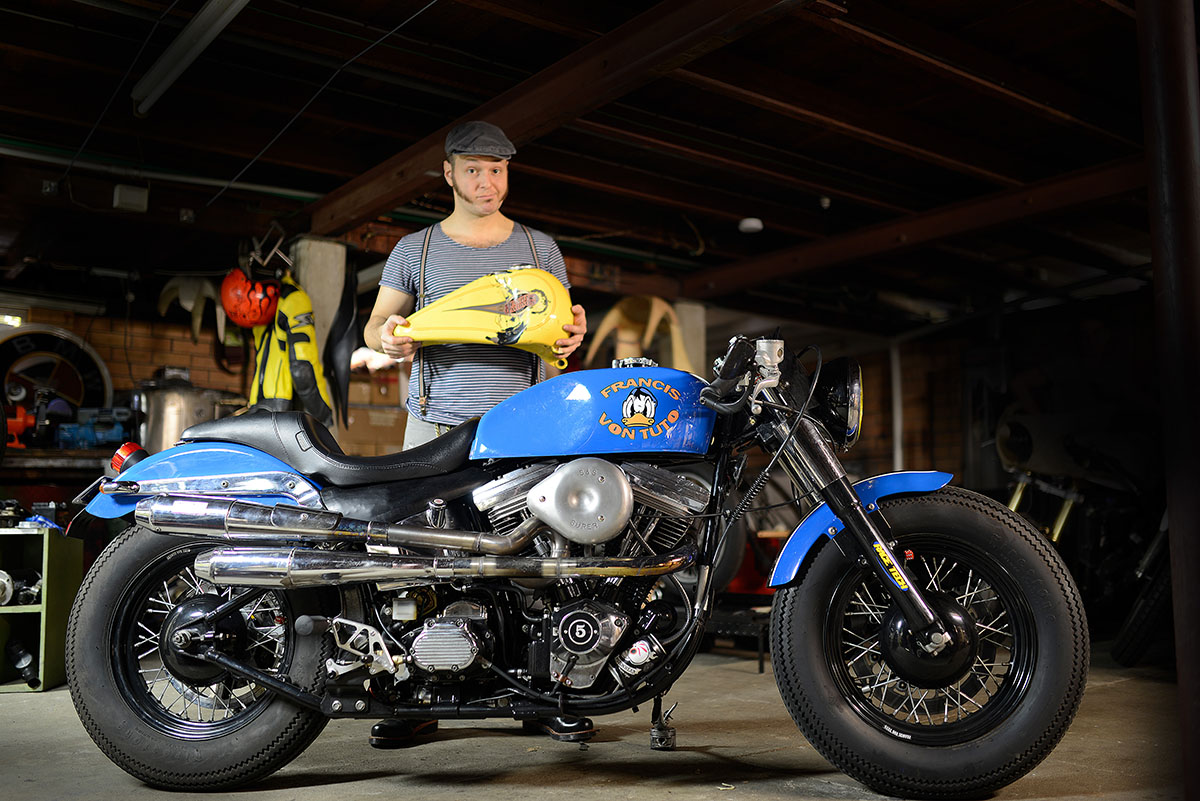 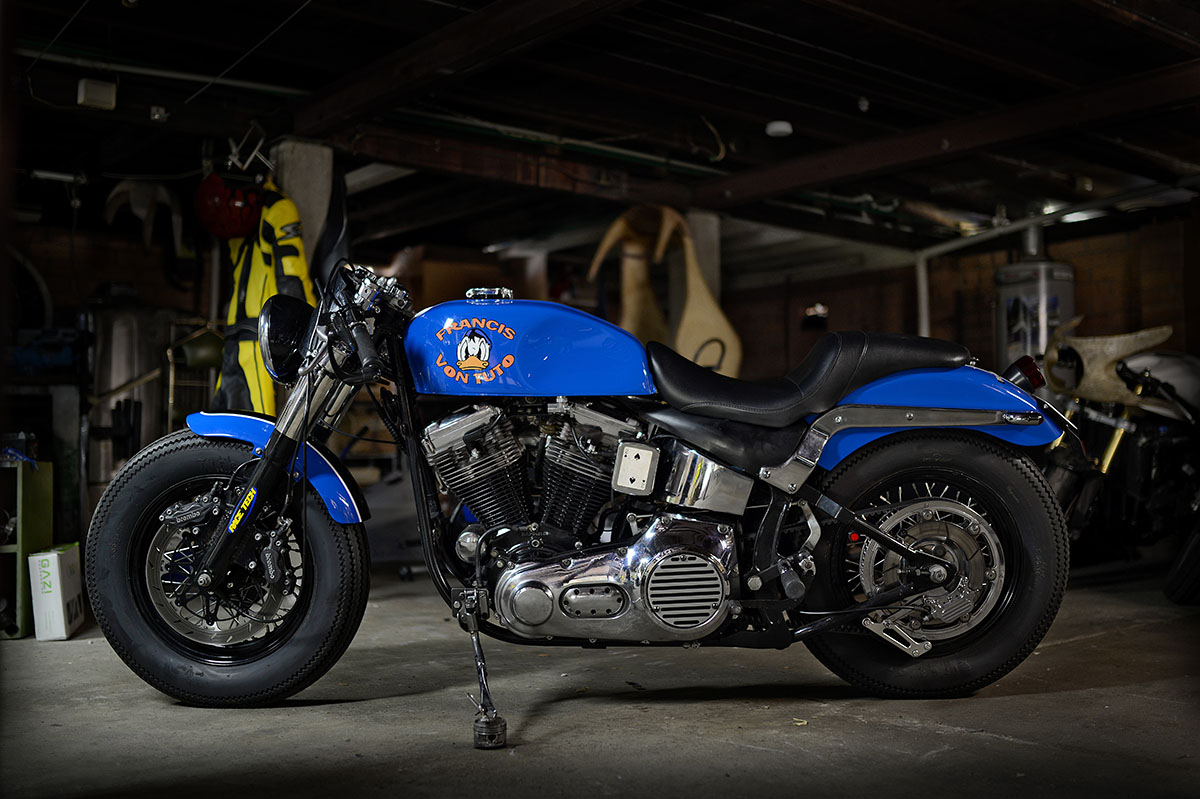 “Surrounding the engine is a generous S&S Super B complete manifold and classic teardrop filter cover, the air filter element is K&N which is taller than the standard S&S and results in better air flow. It’s been fully rebuilt and tuned to suit the engine mods and exhaust which features hand made headers with recycled muffler parts that a very kind workshop’s rubbish bin had given me.” 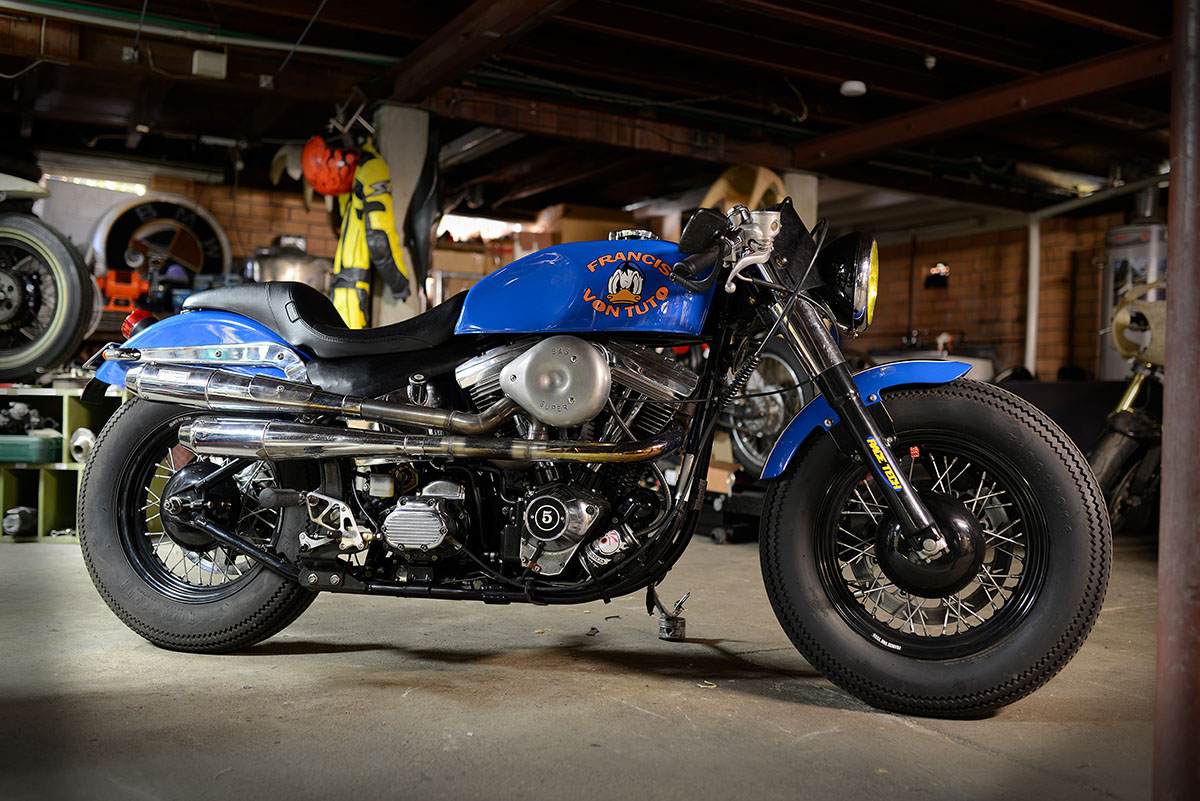 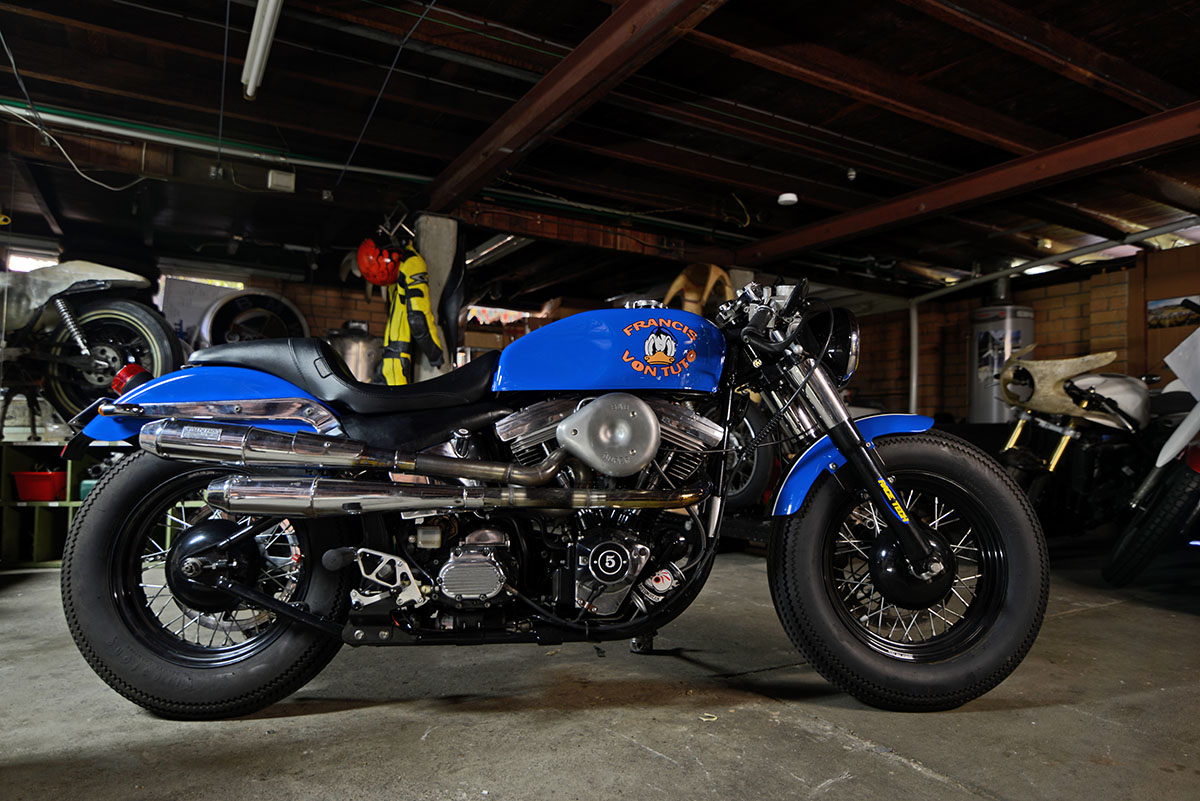 “I’ve chosen an old school paint scheme, people would need to look at the actual bike for what’s special about it, not for the flashy paint job. I made sure there wasn’t any Harley badges or writing left, as it’s already pretty obvious that it comes from Milwaukee. A custom build is of course about the donor bike/base chosen, but I’d say it’s more interesting to know who built it, and where to find him. So the tanks sides where used to highlight my name as a builder (Francis Von Tuto) with the angry Donald Duck in the centre. It’s a childhood memory, in the 90’s it was very popular, it’s also my favourite character. He’s very temperamental, but he’s a big-hearted dude. The funny thing is when I First came to Brisbane and started working with the locals, my English was pretty terrible, and though I had thought I had fair language skills… I’ve tried hard to mock Queenslander’s slang to integrate, but I ended up getting teased because I did sound like “the spaghetti version of Donald Duck. So that sticker really deserves its central position.” 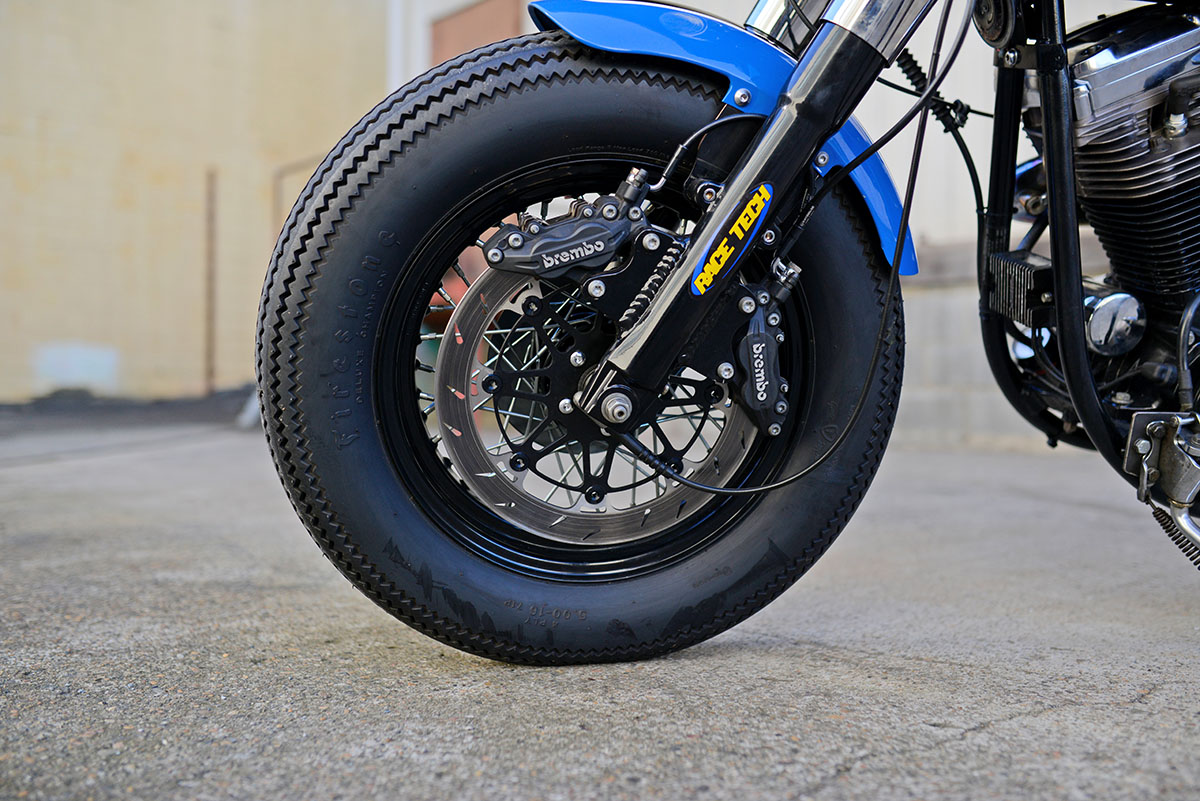 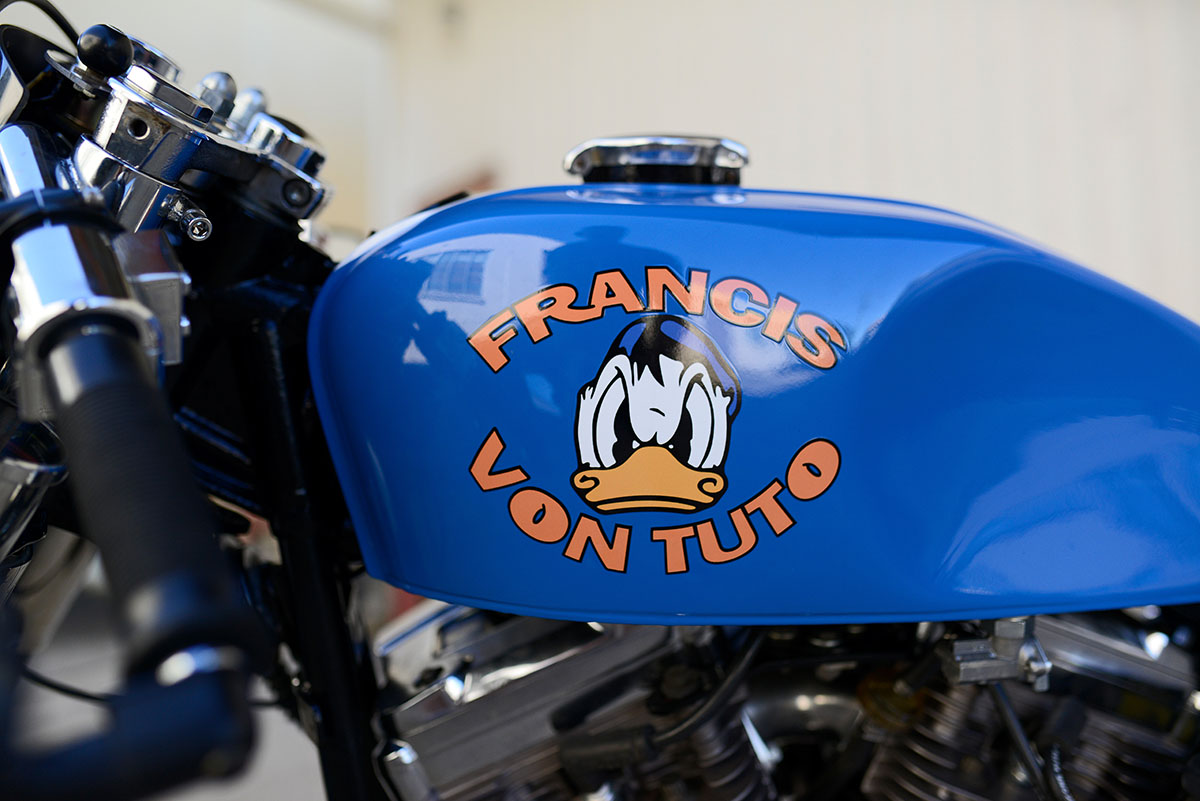 “The aim of course for this bike was to make it more rideable, so I increased the leaning angle, gave it a sportier oriented riding position alongside a 360 degrees performance increase (suspension, brakes, and engine) the look had to reflect my personality in the motor world. In my mind the bike should have been what Marlon Brando could have used in The Wild One movie if his ride was a Harley Café Racer rather than a bobbed Triumph, with some Francis Von Tuto style. Talking about tricky bits, the brakes were interesting, surfing the net searching for parts was very fruitful.” 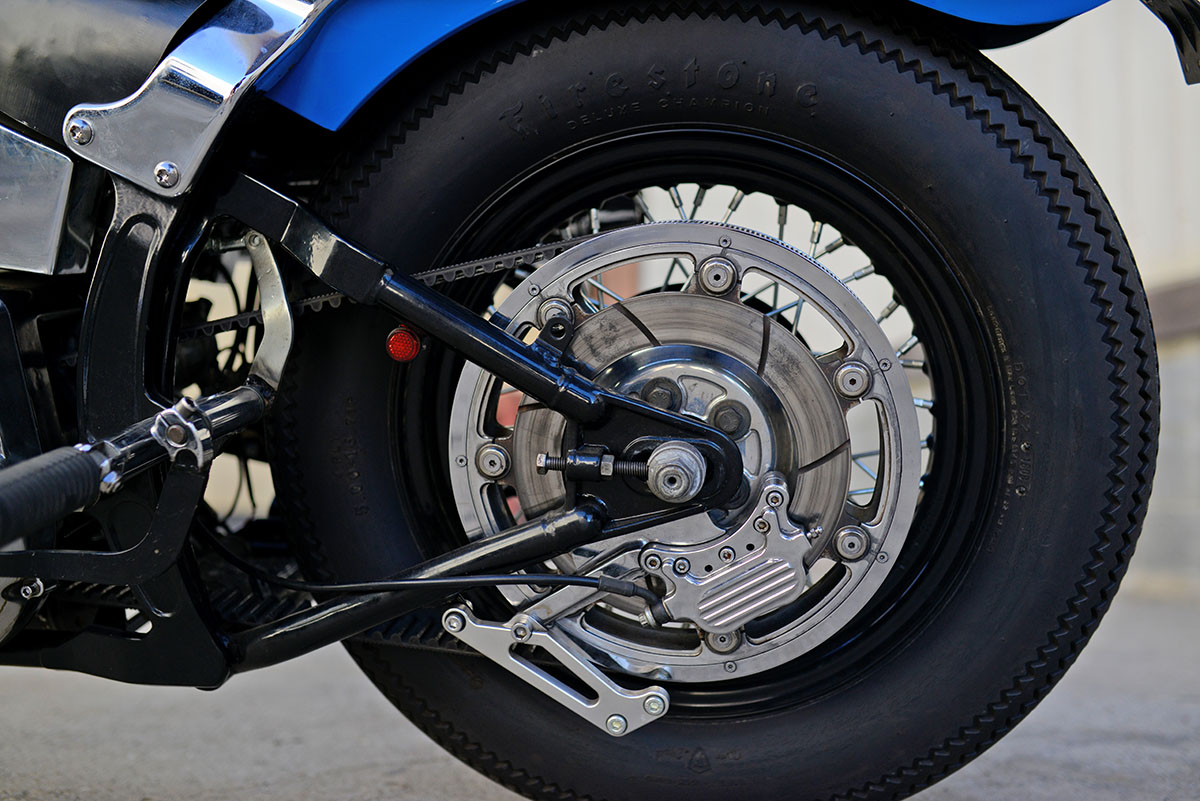 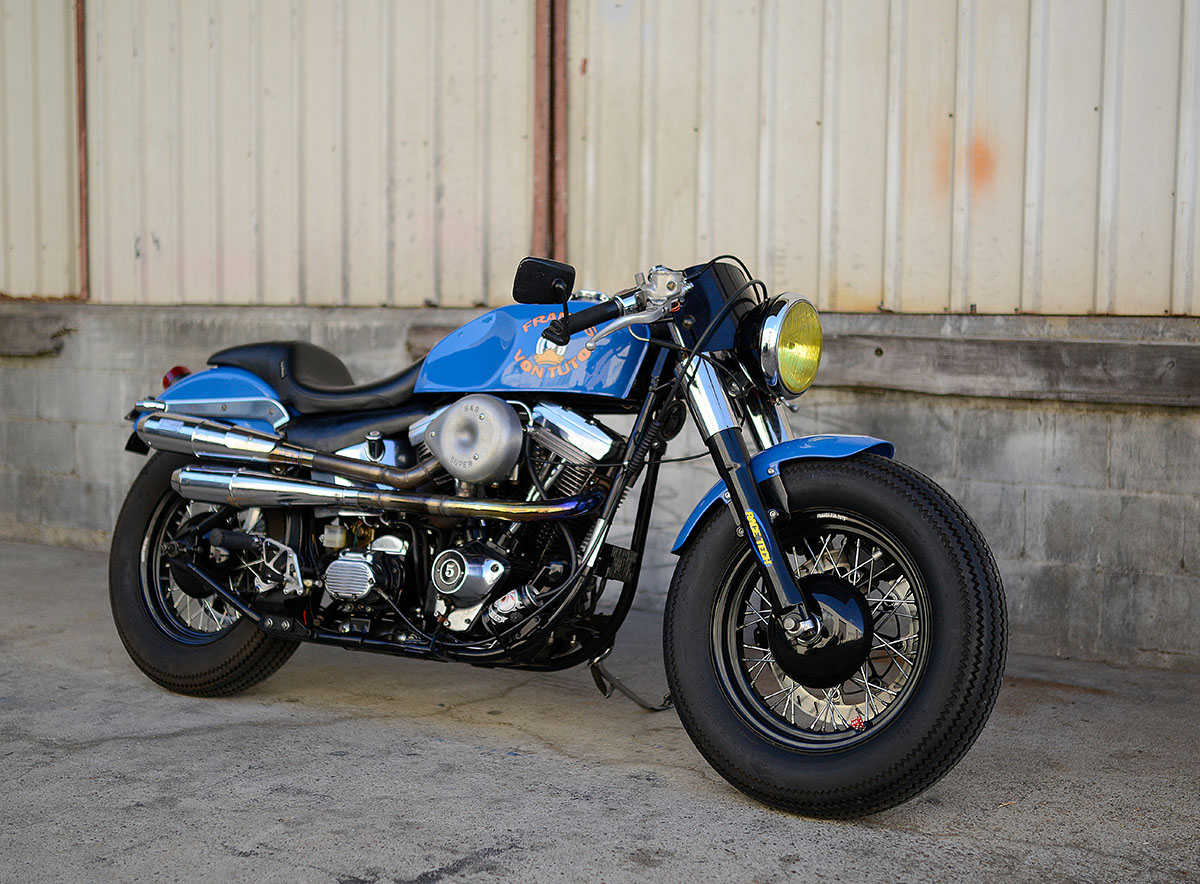 “I had an idea of fitting an oversized disc at the front and ditching the single piston calliper, the disc was easy, Alth Brakes in Northern Italy make beautiful 330 floating discs. It was love at first sight! While looking for a nice 4-piston calliper, I found a set of two hardly used black Brembo 4 Pots callipers from a BMW wrecker. Instantly I remembered about an insane Boss Hoss that I saw in a Custom & Special magazine something close to 20 years ago. That beast in the mag had two performance machine 6 pistons callipers on each disc – good inspiration, but my Harley weights way less than a 350 Chevy monster, so 8 pistons on a single disc were already more than enough, maybe too much. A single calliper would have been boring. Even Nicola Martini (Mr.Martini Verona) told me once: When you’re building a bike, build it crazy; otherwise it’s just another one. People want to see different things, not the same stuff! This last accessory gave the build a very cool feature; on the left hand side there are two powerful brakes with massive rotors, which nearly fill up the whole 16″ rims diameter.” 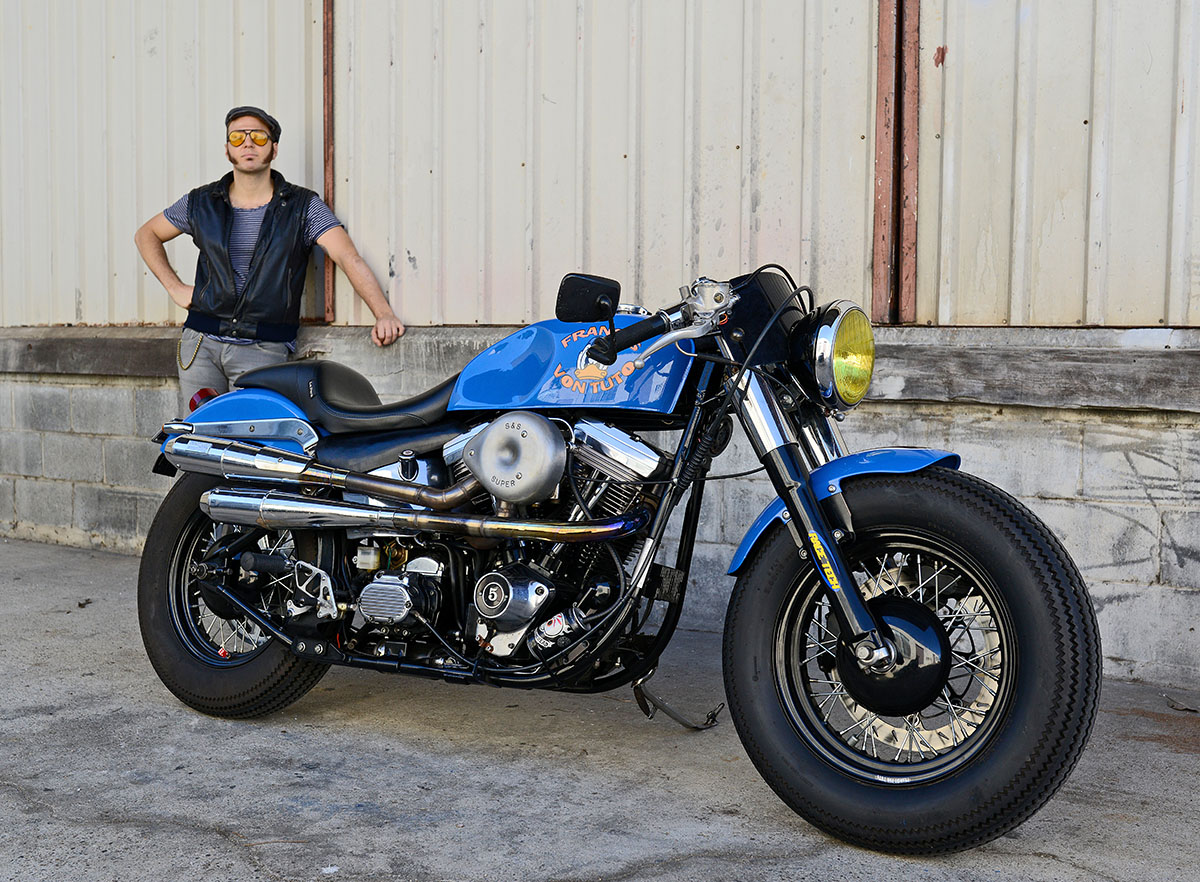 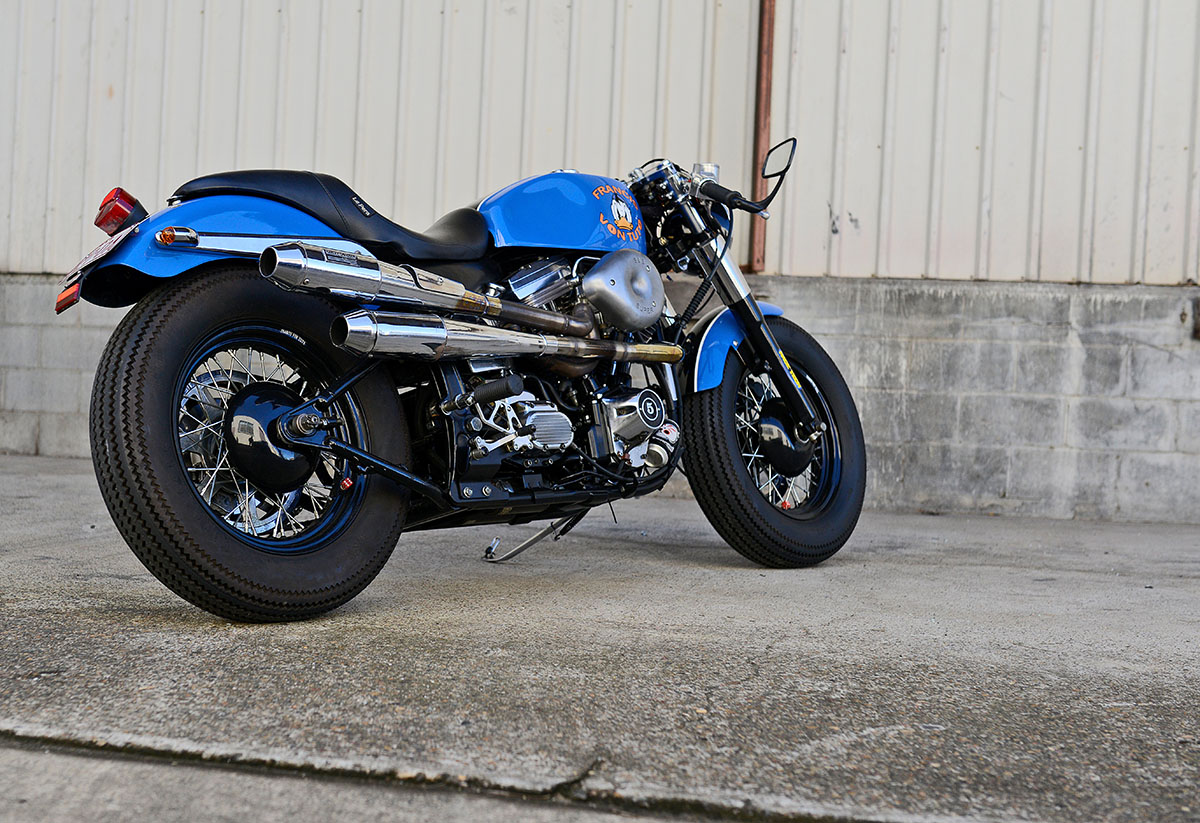 “This is the first bike of what will hopefully be a long series of builds. Completing this project gave me so much pride, being absolutely self-made (apart from paint and some machining work) and self-awareness of what I really enjoy doing. I’ve spent many nights and weekends in a share house room first, and then two different garages while building this bike. The build has been completed in my spare time over 3 years. This is another key factor that recently brought me to quit my job and dedicate the next few months to the completion of all the project bikes that I’ve collected during the last 5 years. After that I’ll choose which path to follow for my next career.” 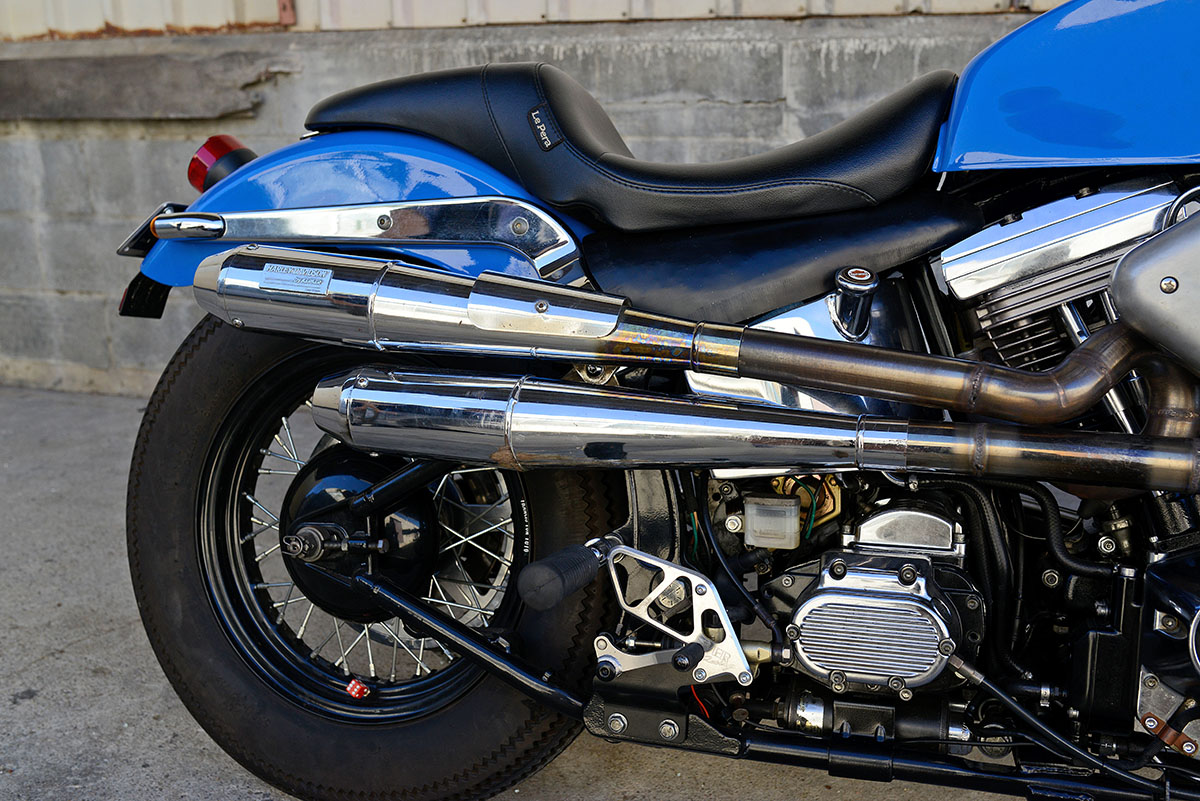 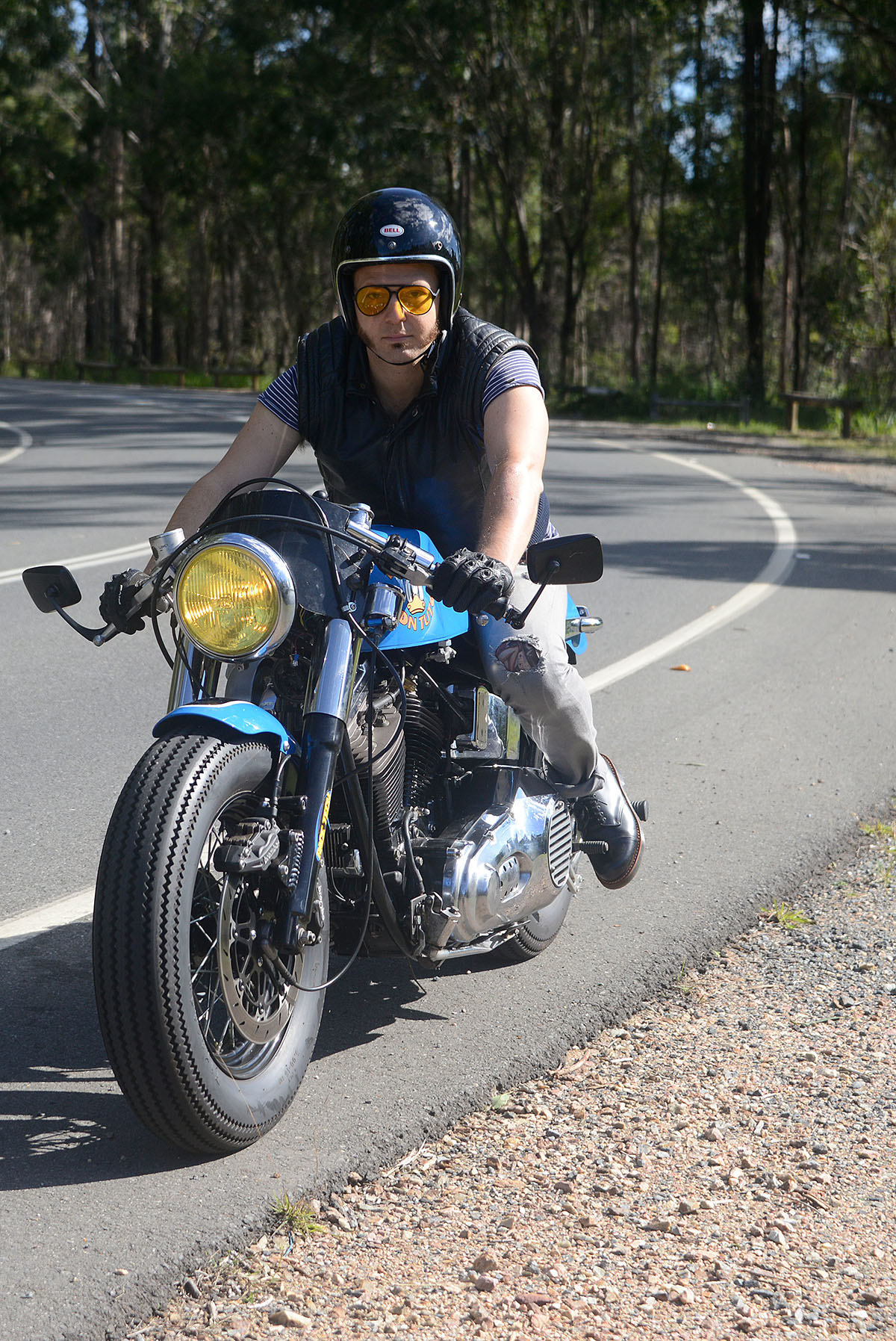