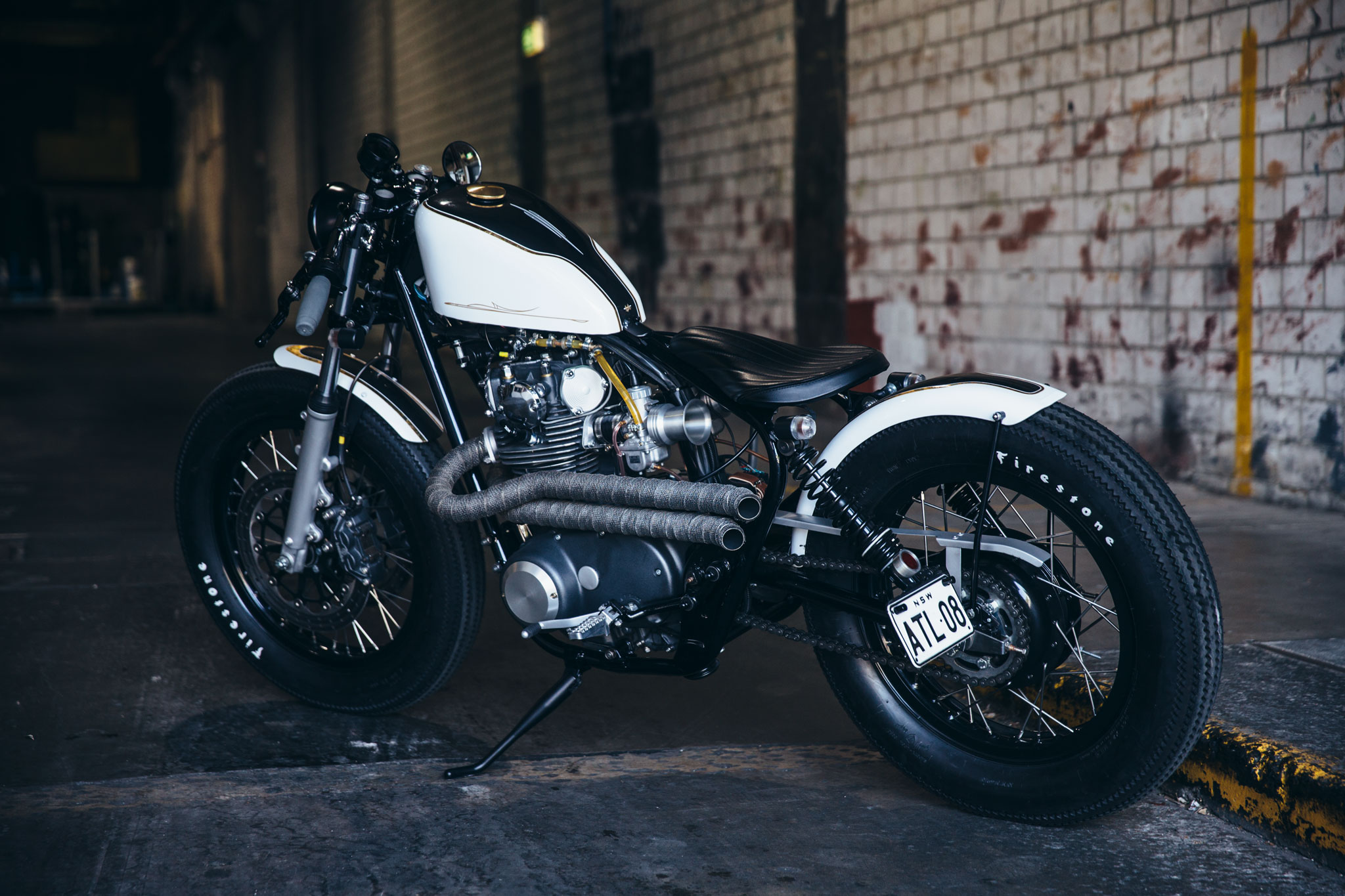 Meet Xxie, the 1975 Yamaha XS650 that earned its namesake firstly due to it being an XS model (duh) and secondly because of the unexpected money pit that it turned into. It’s all worth it though from our perspective, as it’s a killer build, and it wasn’t our money. 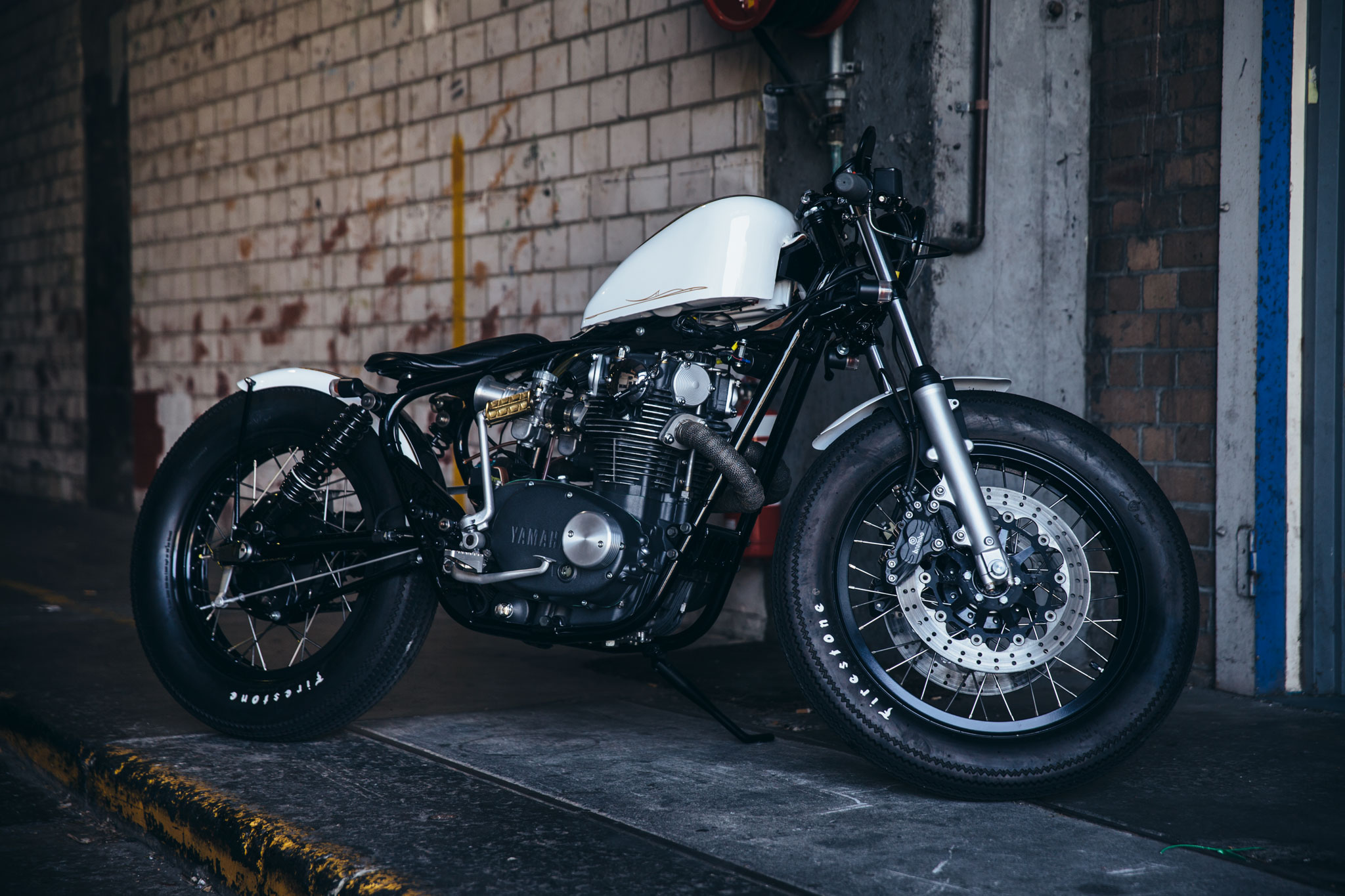 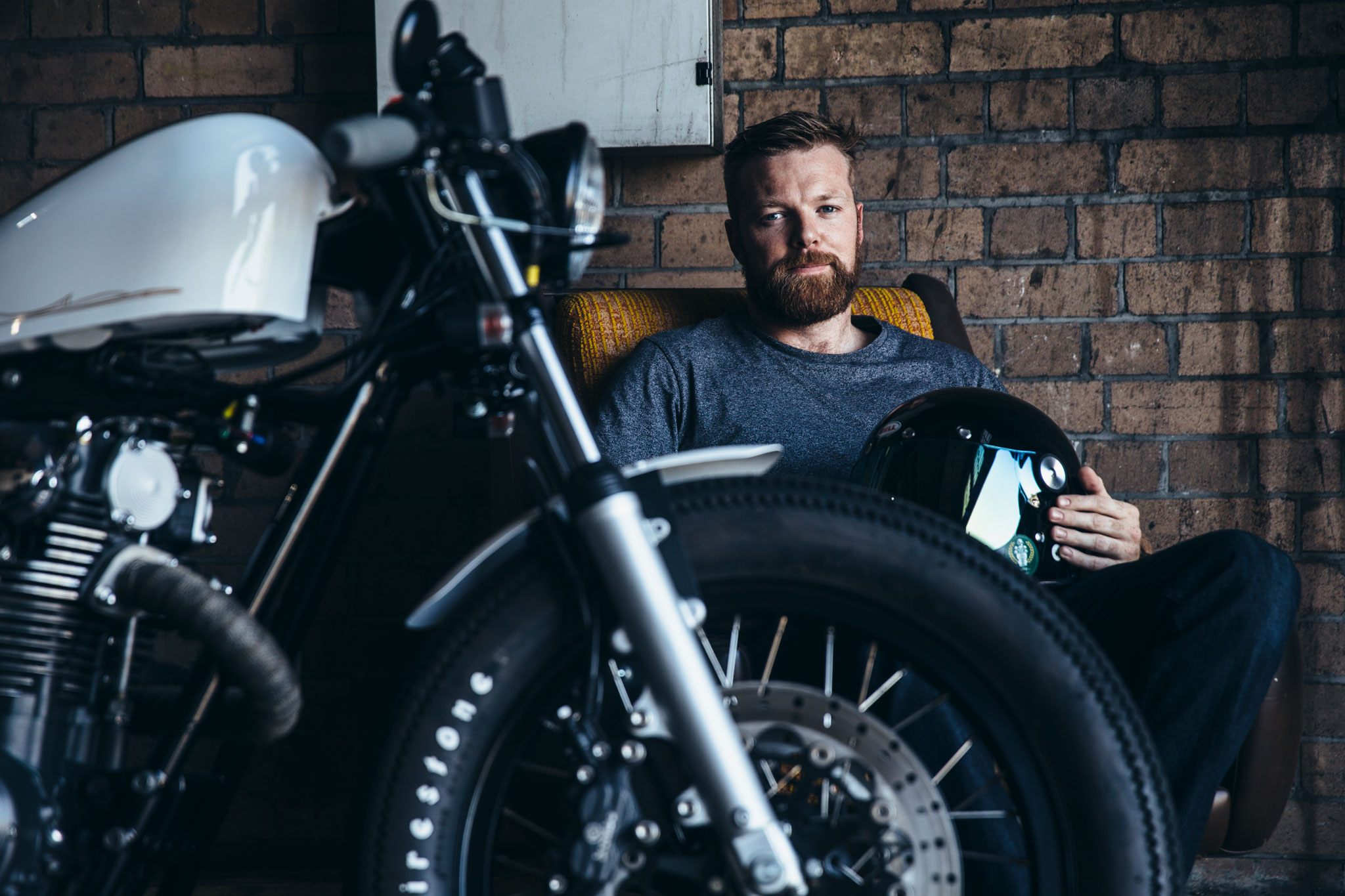 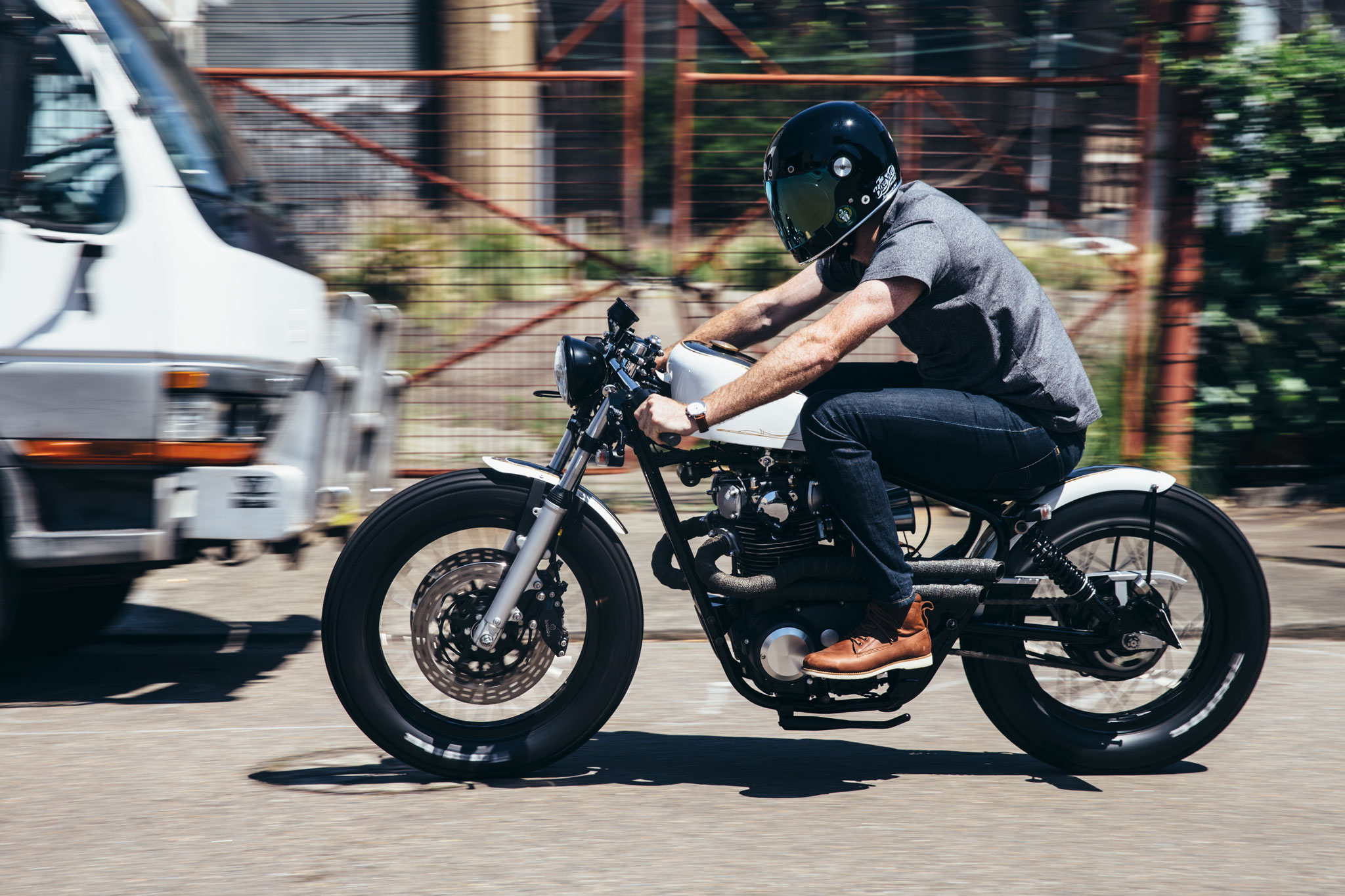 It was after attending Throttle Roll 2013 that Nick was struck with the motivation to get a project bike started. This would be perfect as he was running out of space, which meant no more car projects. “I’d seen a couple of XS650’s around, and every build was pretty unique. There were café racers, bobbers, choppers, and trackers. After many hours trawling Instagram and Google I found that this model had a pretty big following in the States, so plenty of aftermarket parts were readily available.” 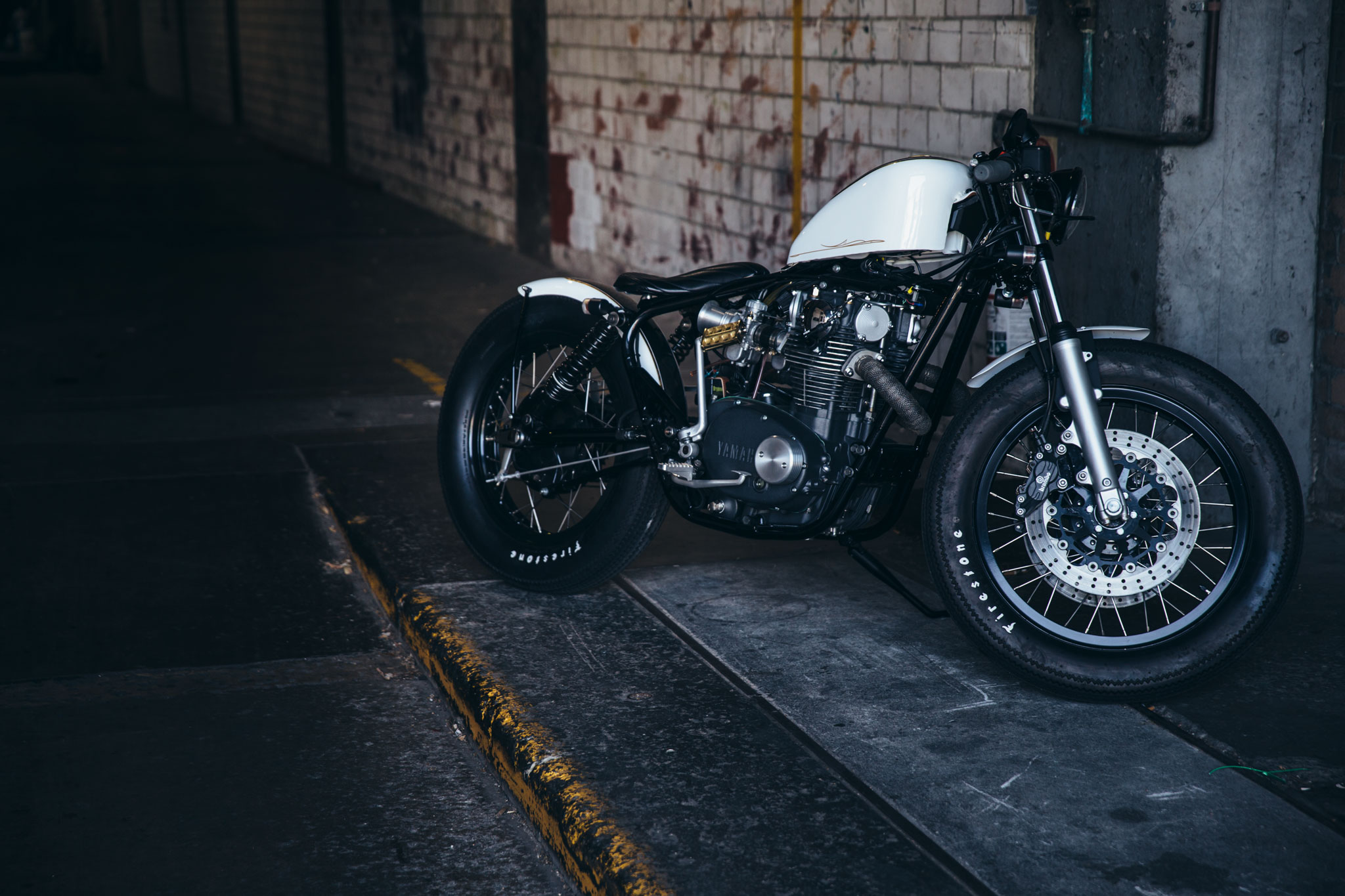 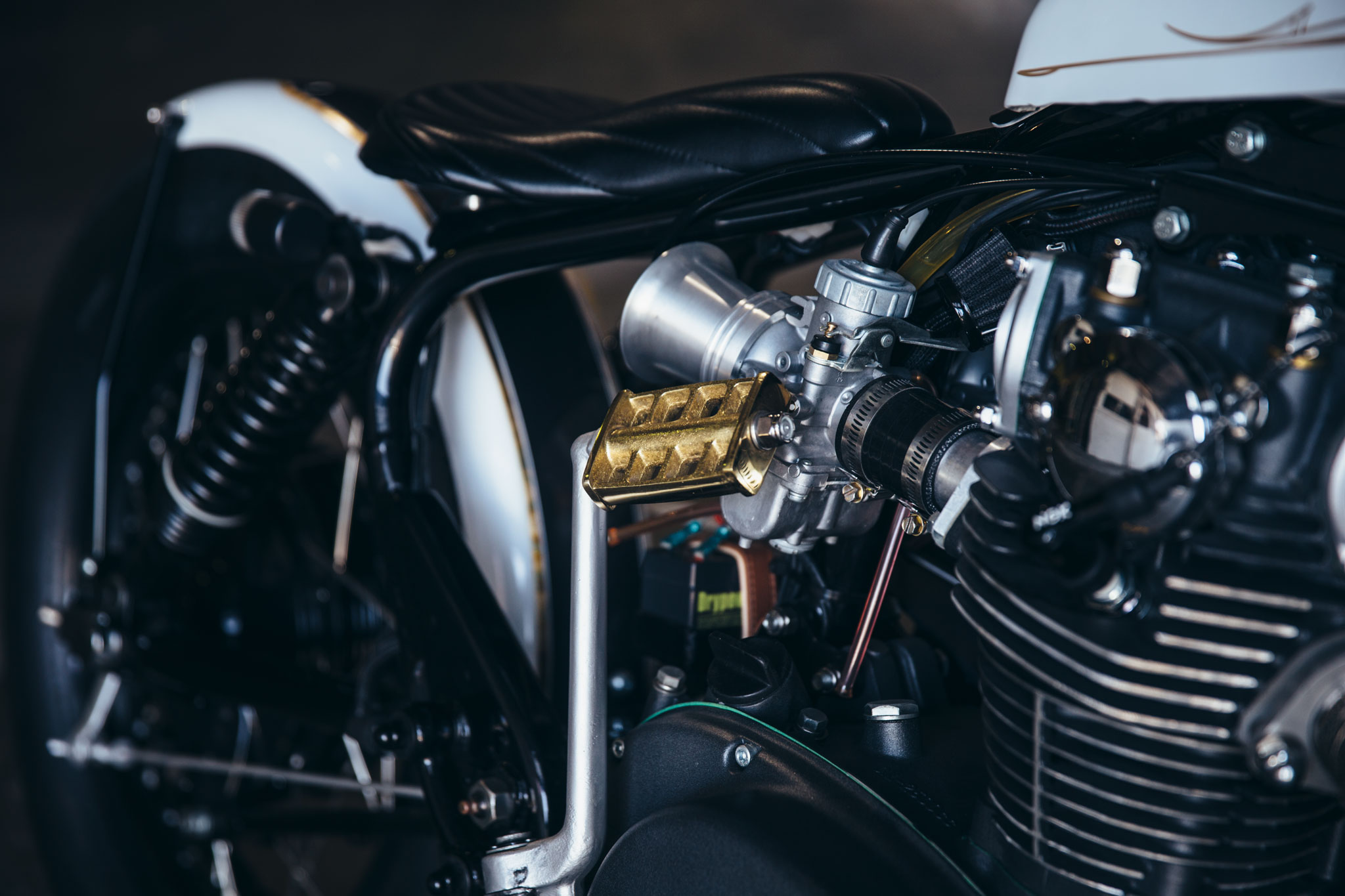 This 1975 XS650 was picked up at a deceased estate. The poor machine had been sitting in a shed for over 6 years gathering dust and rust, and was in pretty rough condition. “Dad and I tried to get it running before we pulled it down with no luck, so we got stuck in and attacked it with the grinder!” 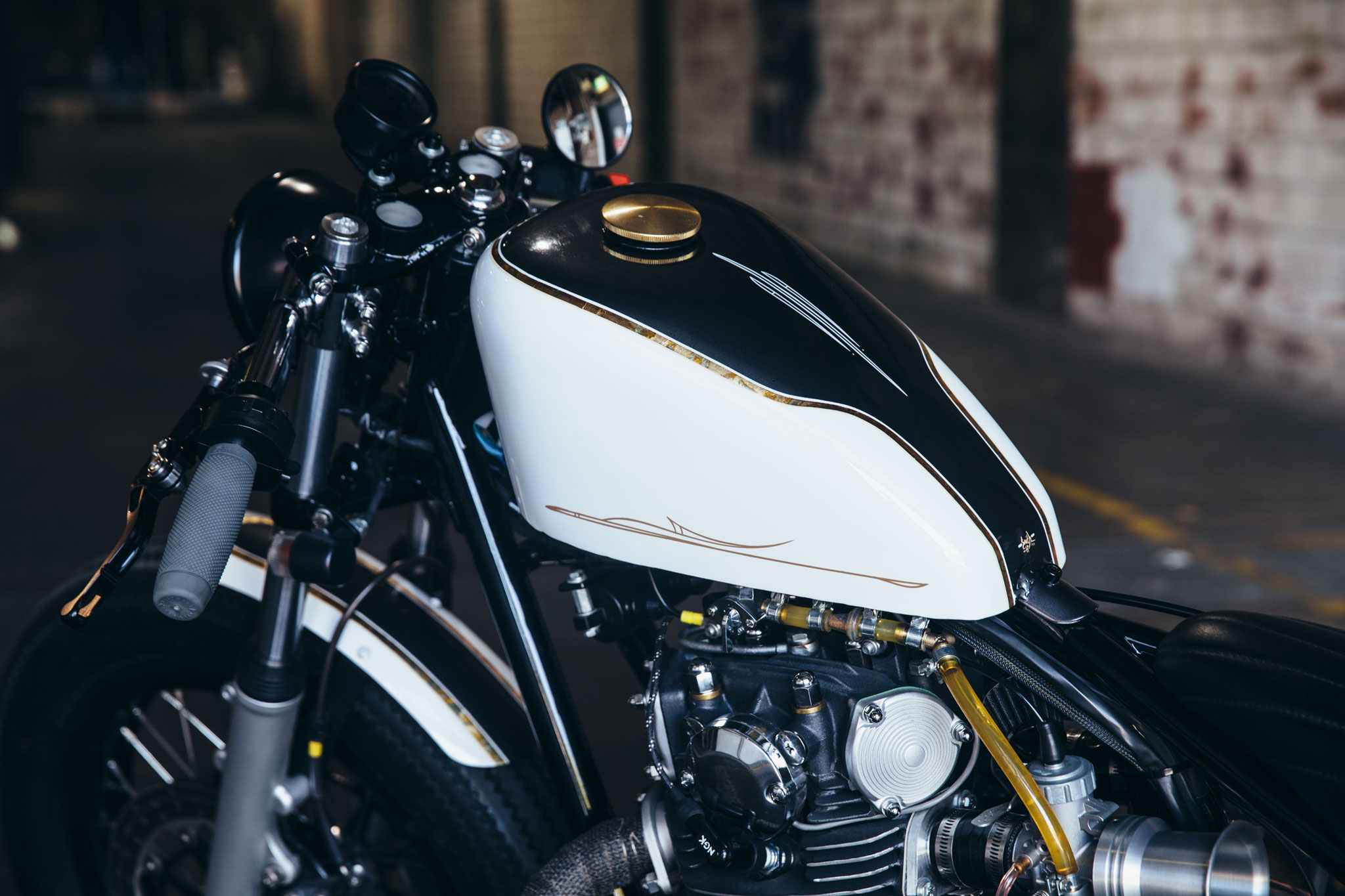 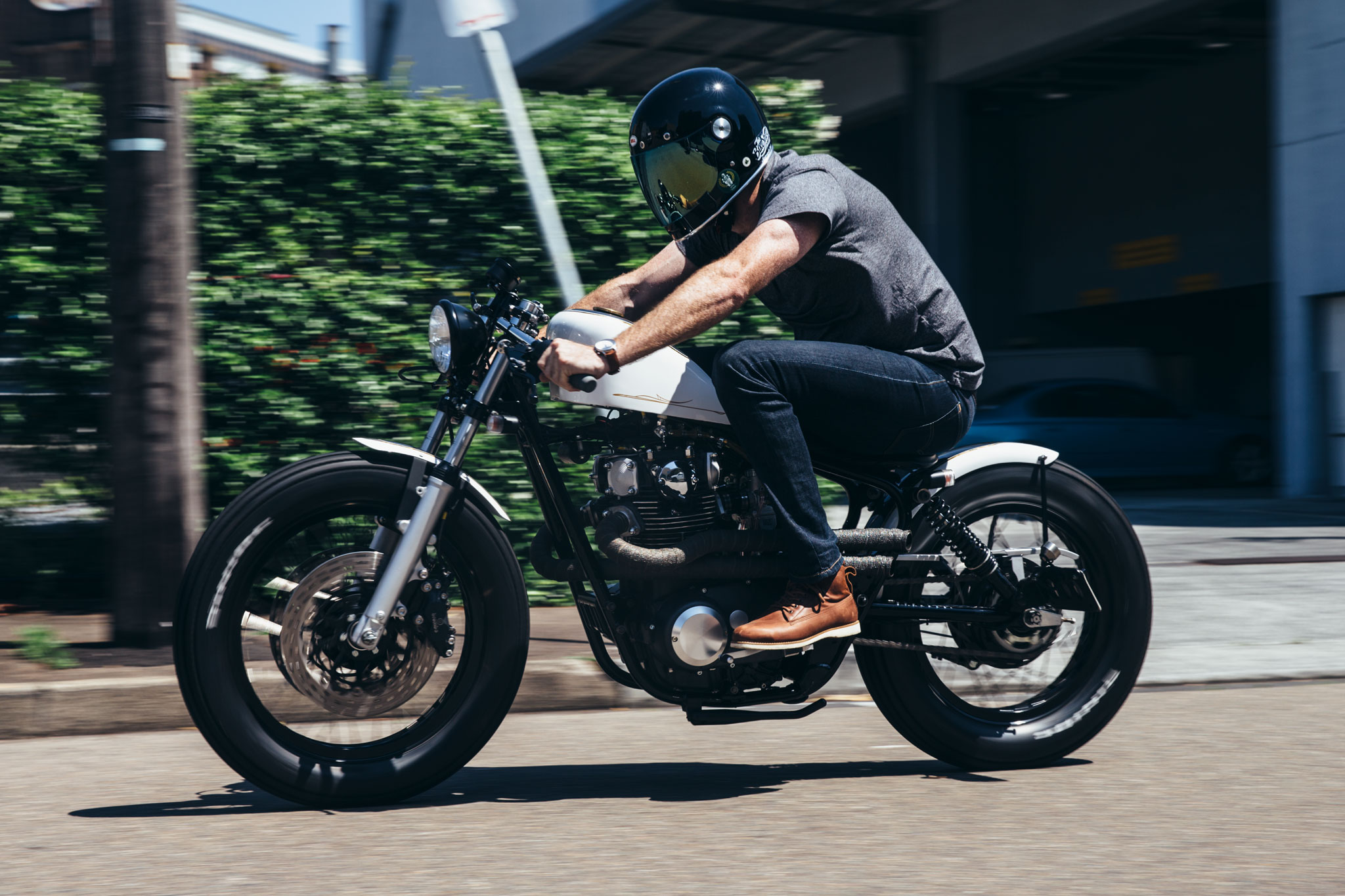 Nick was now armed with plenty of inspiration and had a vision for what he wanted to transform his 40+ year old machine into. “I bought the tank and brat seat as soon as I found the project bike, so they set the lines early on and everything began to flow from there. The bike was a twin disc from factory and after a bit of research I found Pandemonium Custom Choppers in the States who made a Brembo conversion kit. I ordered a kit and then made the modes needed to duplicate the setup to run twin callipers and Ducati Monster rotors.” 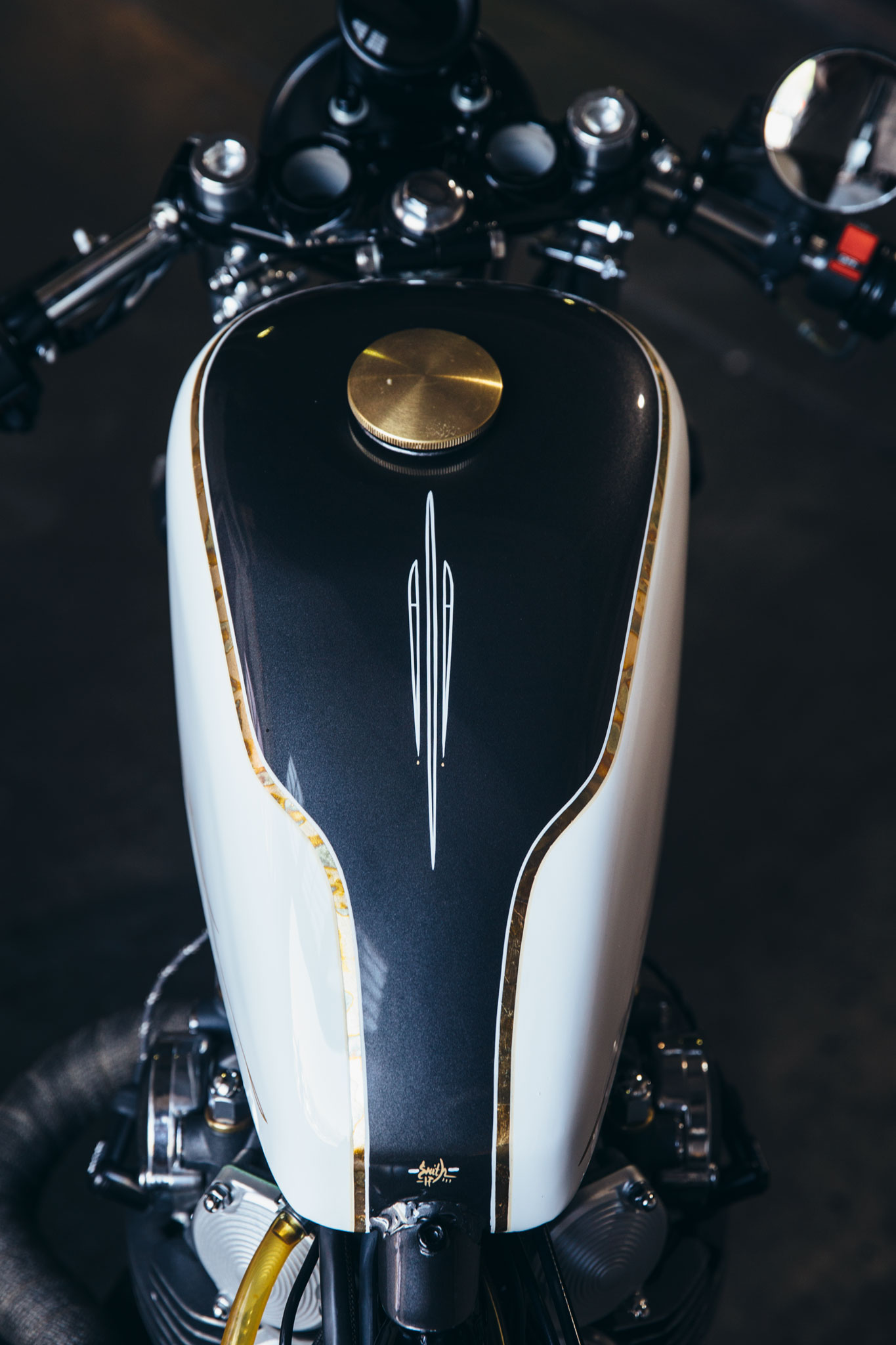 “The engine was treated to a full rebuild, with an upgrade to a 750cc kit, Hugh’s Handbuilt PMA, and Pamco ignition, VM34 twin carbs, and Daytona electronic gauge for the speedo and tacho. Hi Octane Coatings powder coated everything on the bike, from the engine casings to the dome nuts on the foot pegs. Crabby and Sam from Southern Cross Automotive helped out with the wiring. Chivos rebuilt the rims and fitted the tyres, while Geoff’s XS rebuilt the motor. Harley at RB Racing got the bike running like a dream with a much needed carbie tune and dyno. The only original pats left on the bike now are the front half of the frame, hubs, rims and side engine covers.” 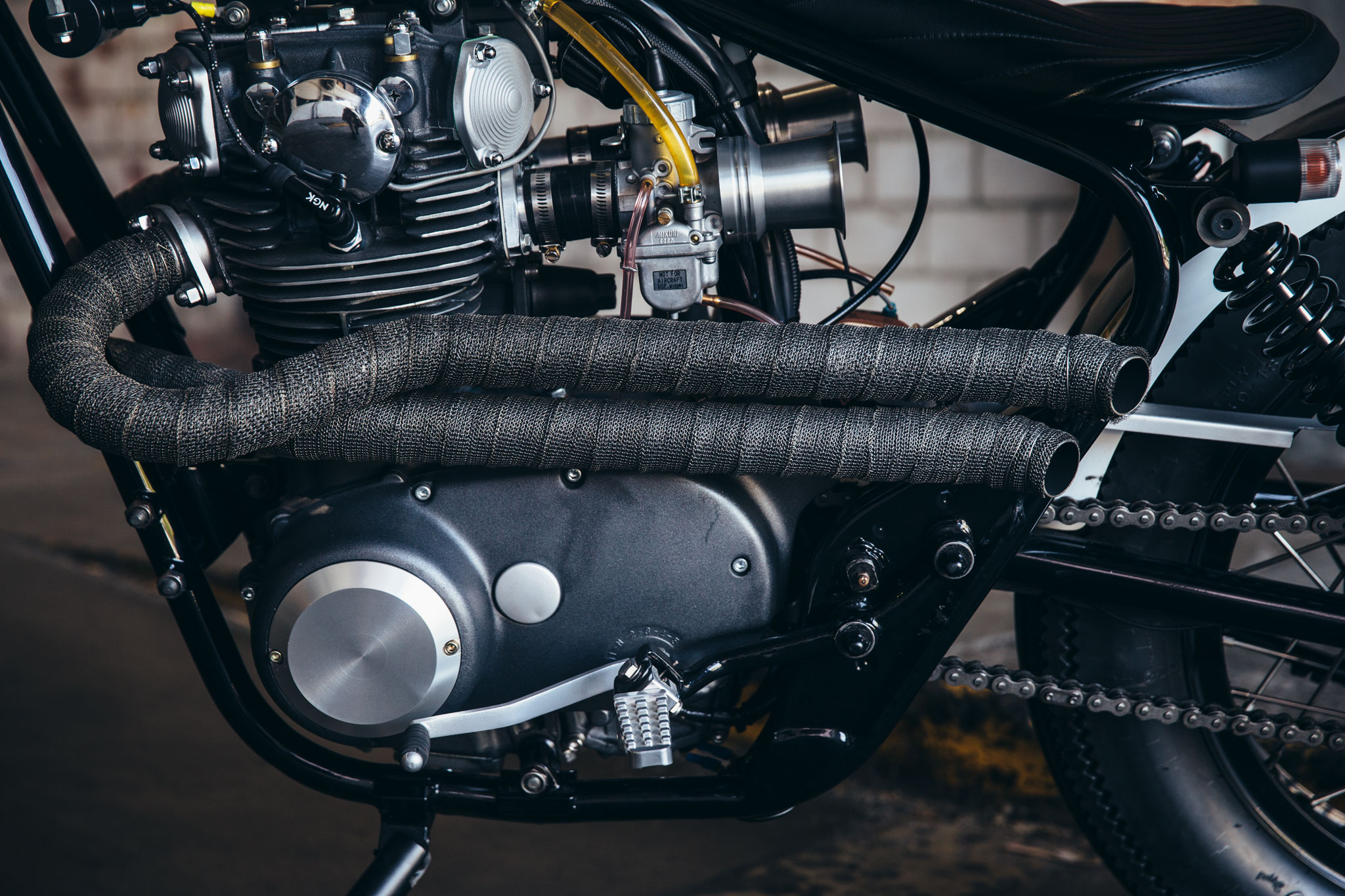 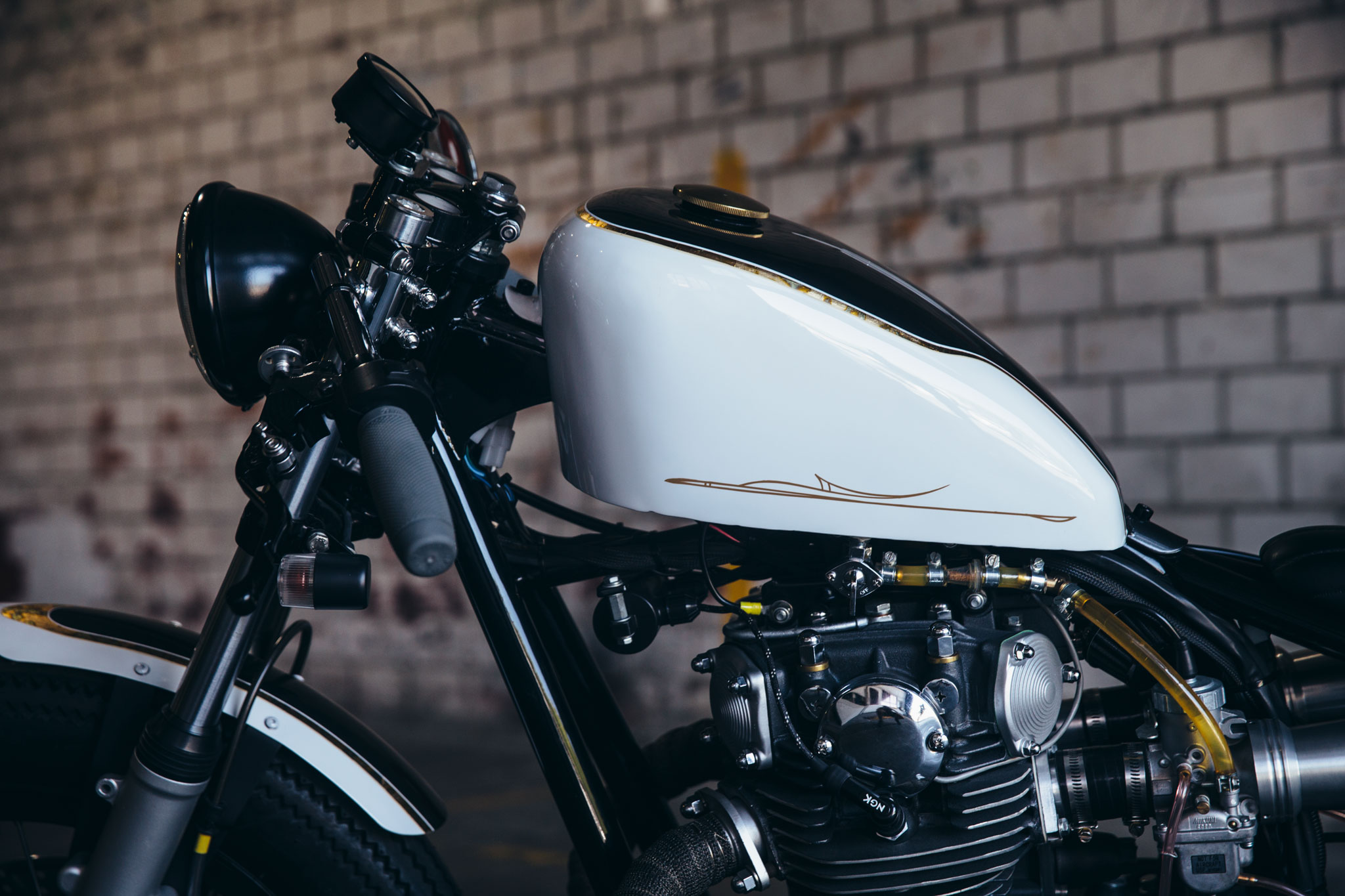 Originally Nick had plans to extend the swing arm, stretching the bike out a bit more to give it more of an almost hard tail look, however this never made it to the final product. “The paintwork was left up to Kyle Smith at Smith Concepts. I only chose the colour scheme and had a loose idea on the design, he did all the magic.” 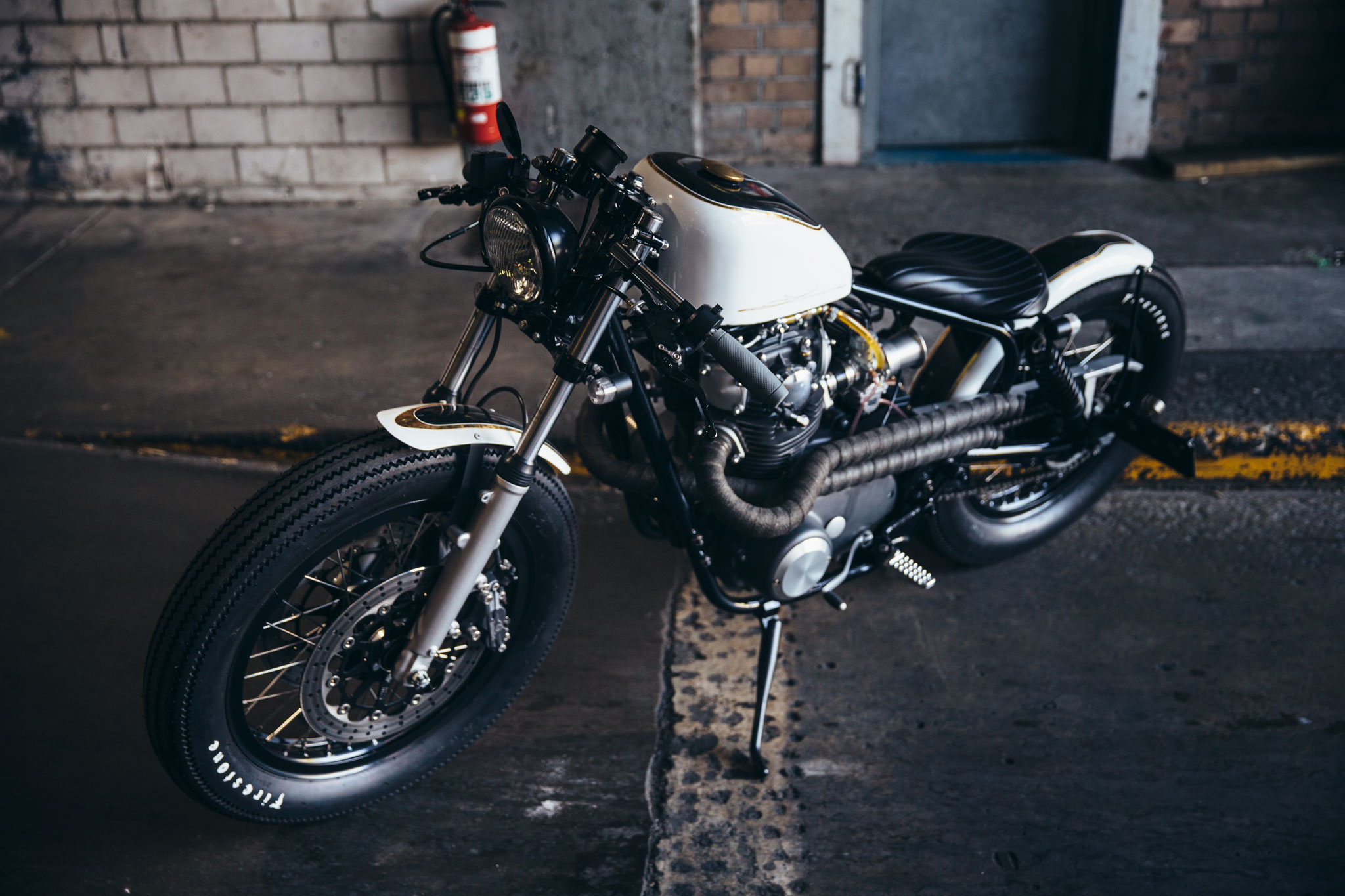 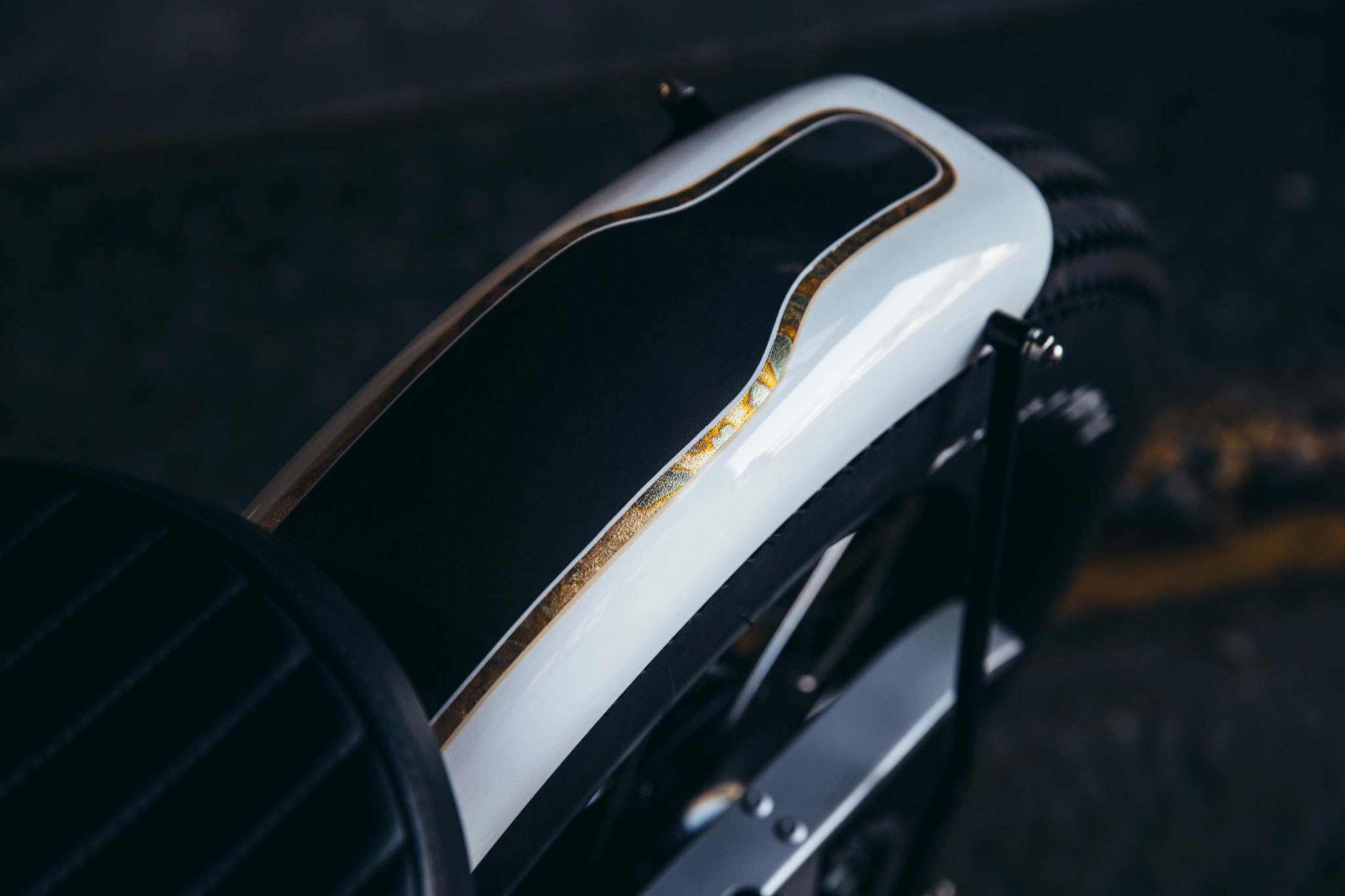 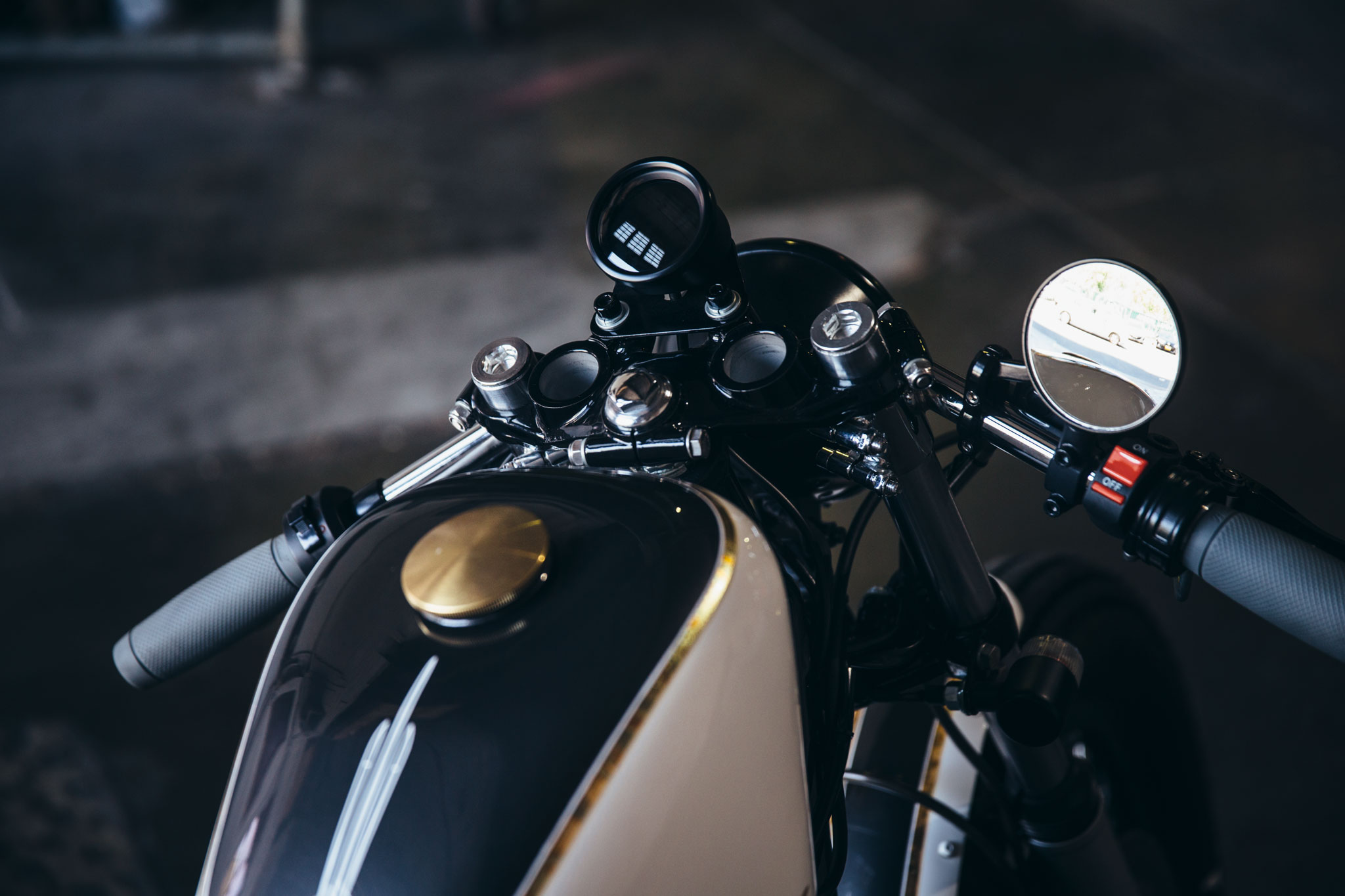 The build was not without its gremlins however, and there were the usual headaches that you’d run into when never having pulled a bike apart before. “The lengthy delays in shipping when ordering the wrong parts from the States also were a pain. That said, I really enjoyed tinkering in the shed on the bike, slowly getting the form to take shape. I’m happy to say that it’s finished, and I’m looking forward to finding another project soon.” 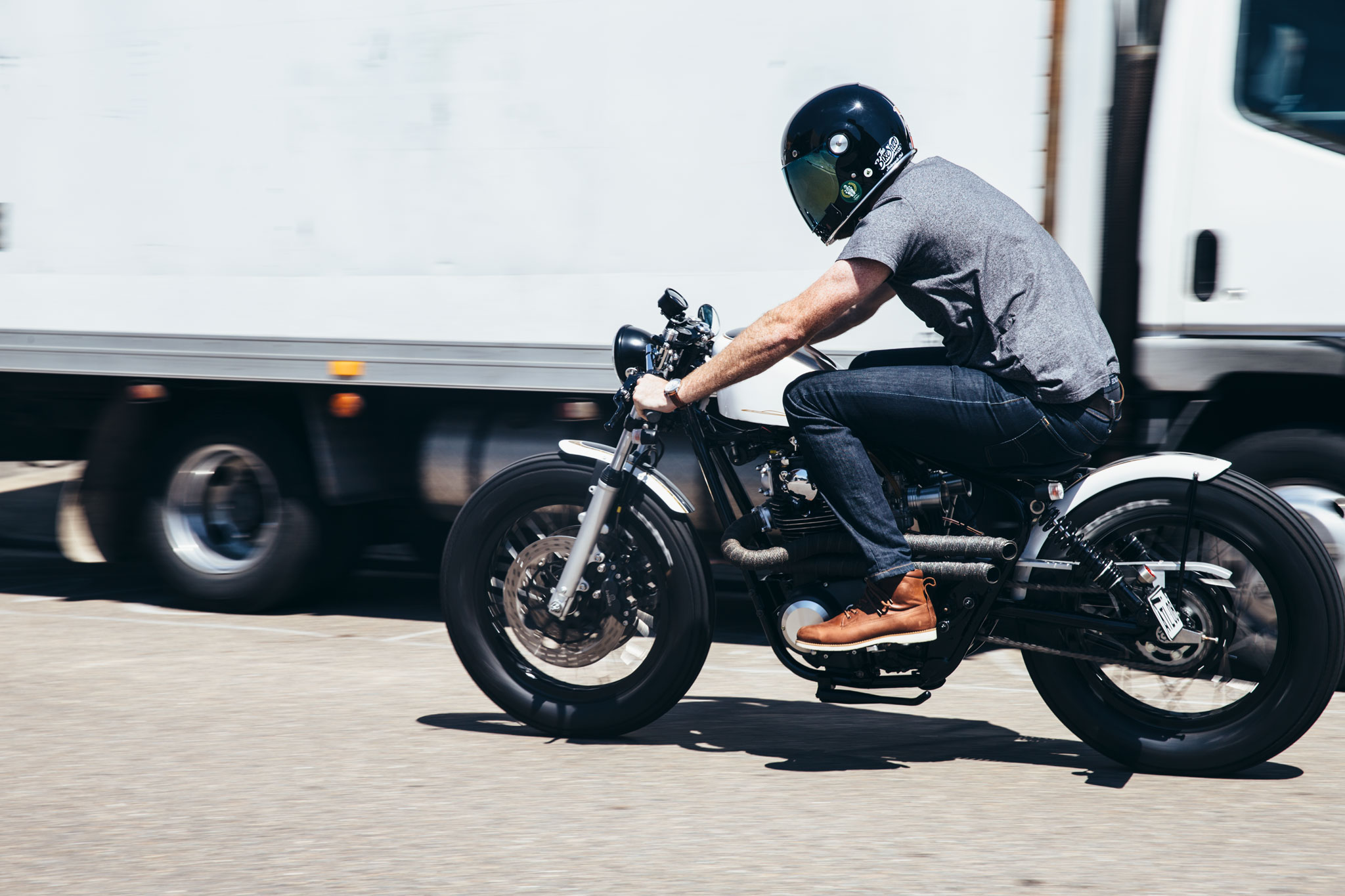 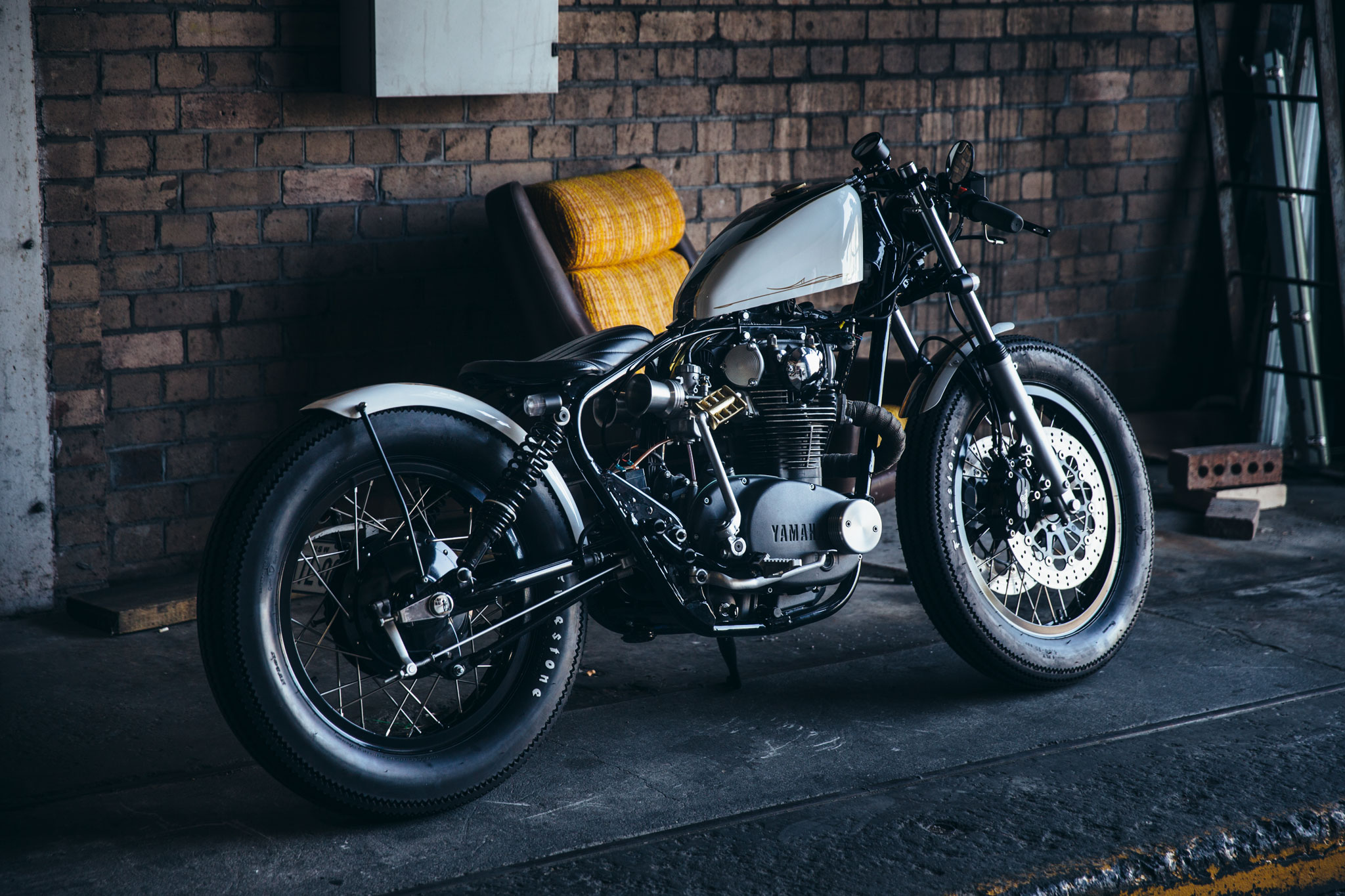 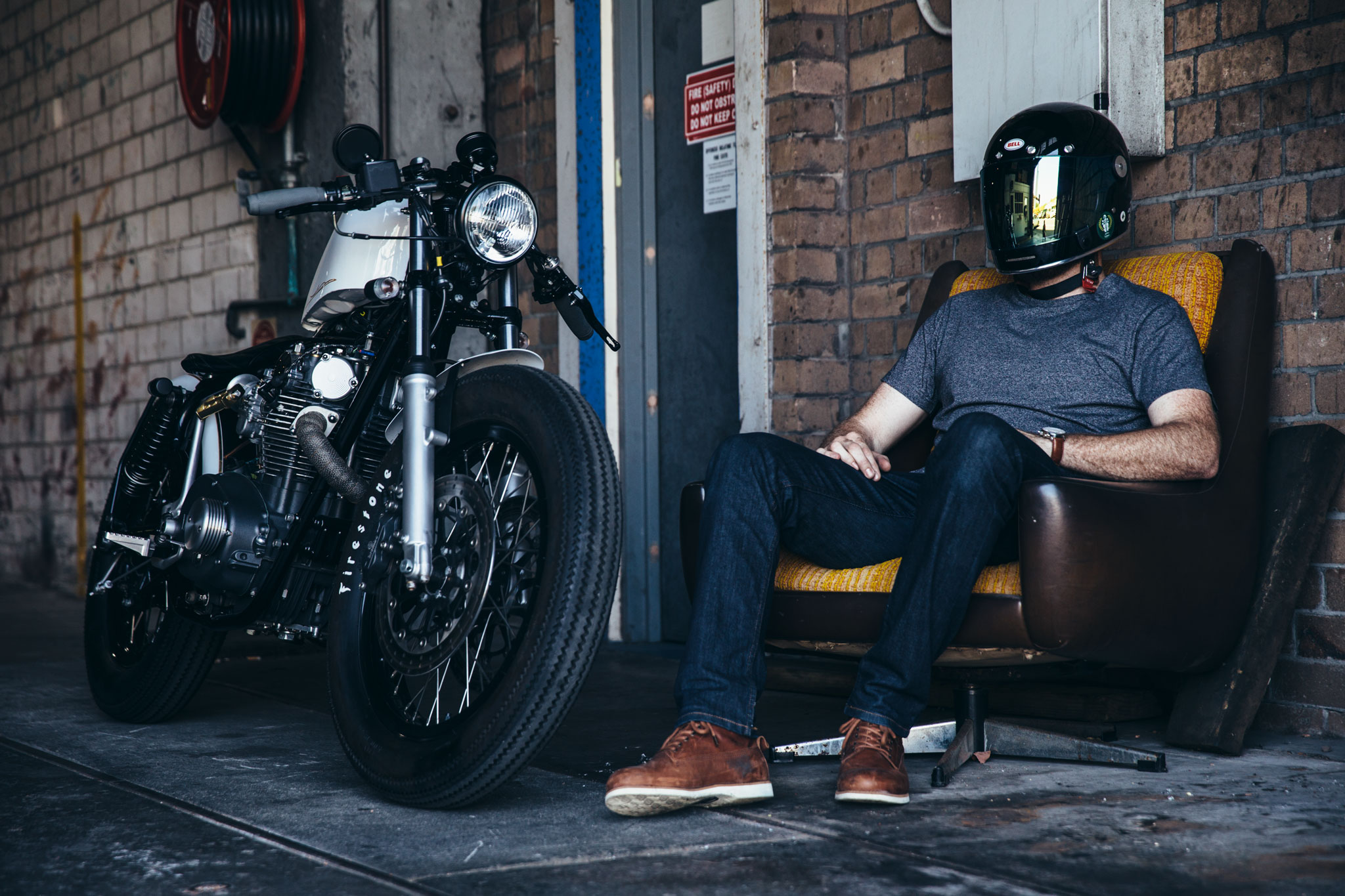 This XS650 is a bike that’s truly sharp and refined, it may look unsuspecting from afar to some but once the roar of its engine comes closer and you take the time to look further into this machine you completely realise the work that’s goes into this bike, and that it’s an aggressive little bastard. 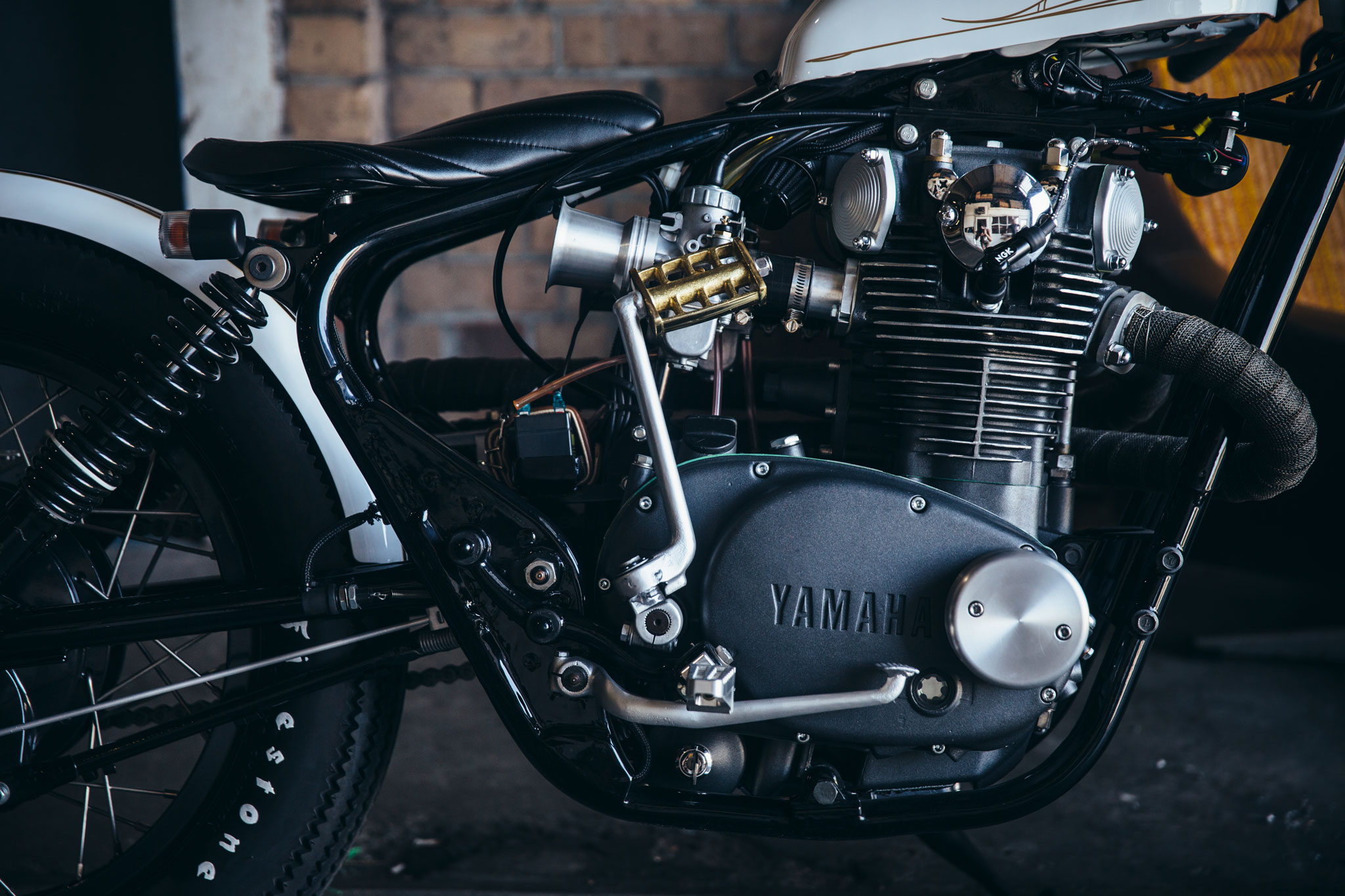 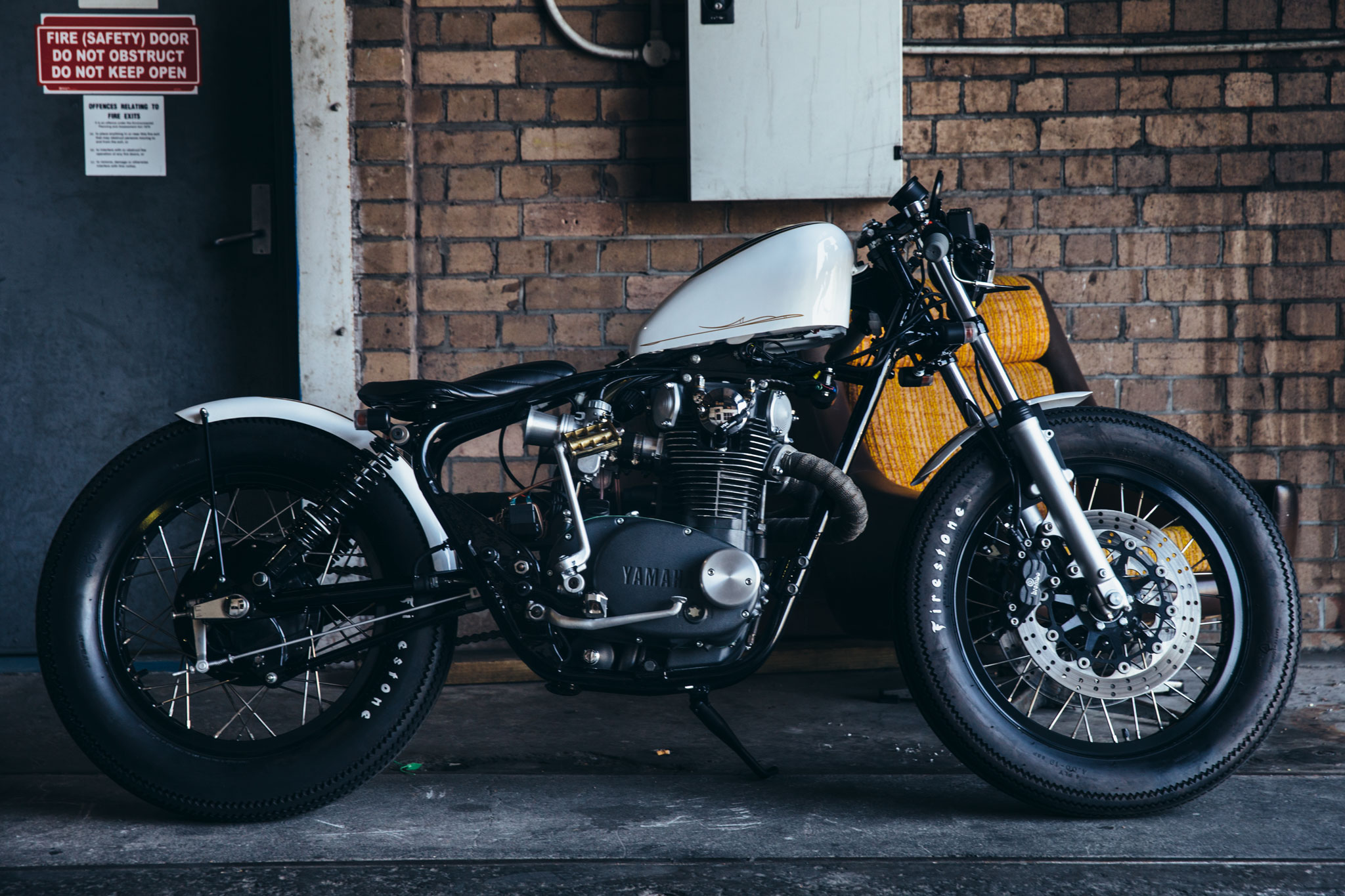 “The thing that really gets me about this bike is how it looks nice, clean, and in a way a little bit plain. But once you kick it in the guts, it’s anything but plain. Everything about it is so bloody obnoxious, with its straight pipes, riding position, and the grunt from the 750cc kit. It puts the biggest smile on my face every time I grab a fist full of throttle!” 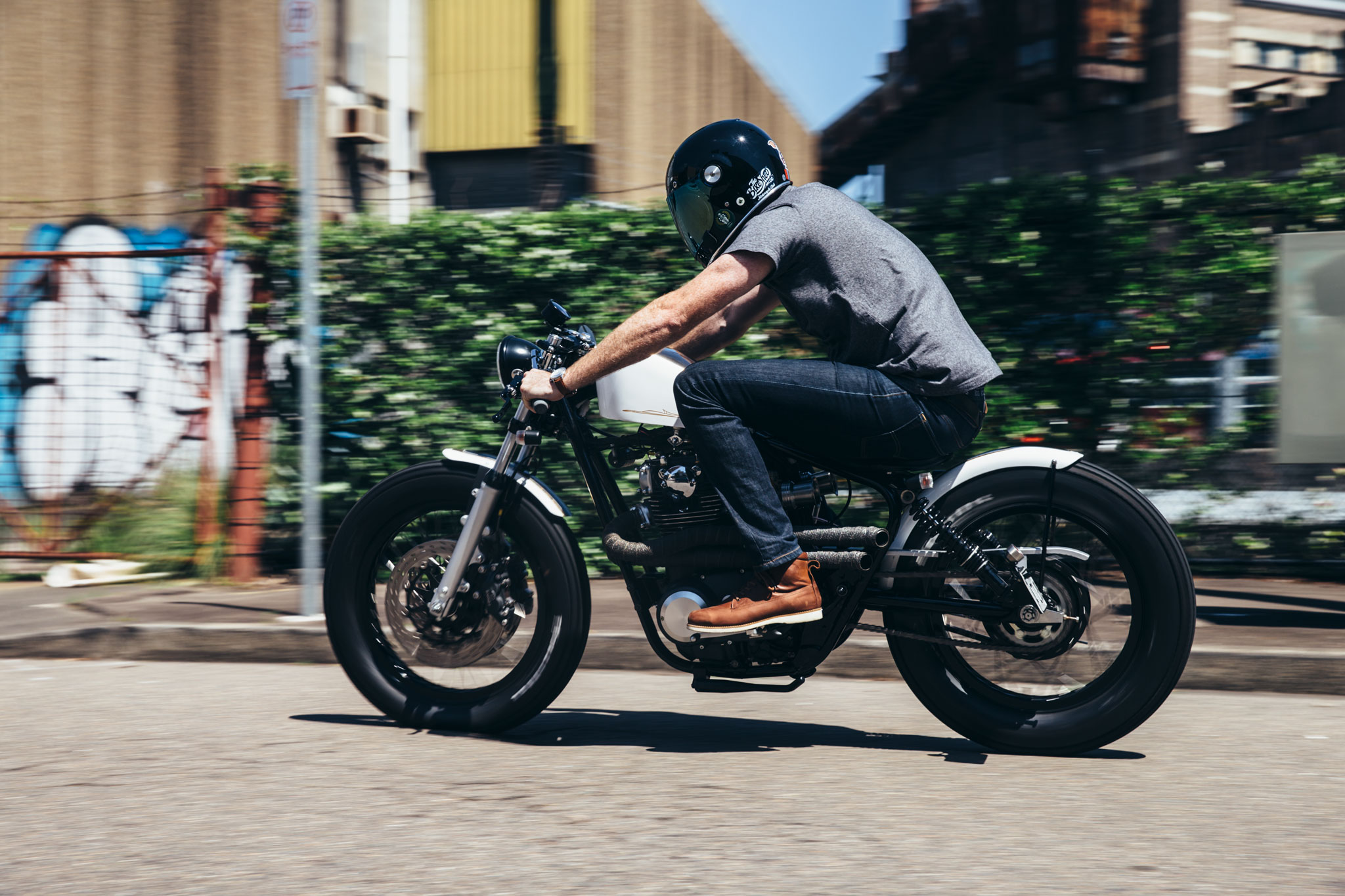 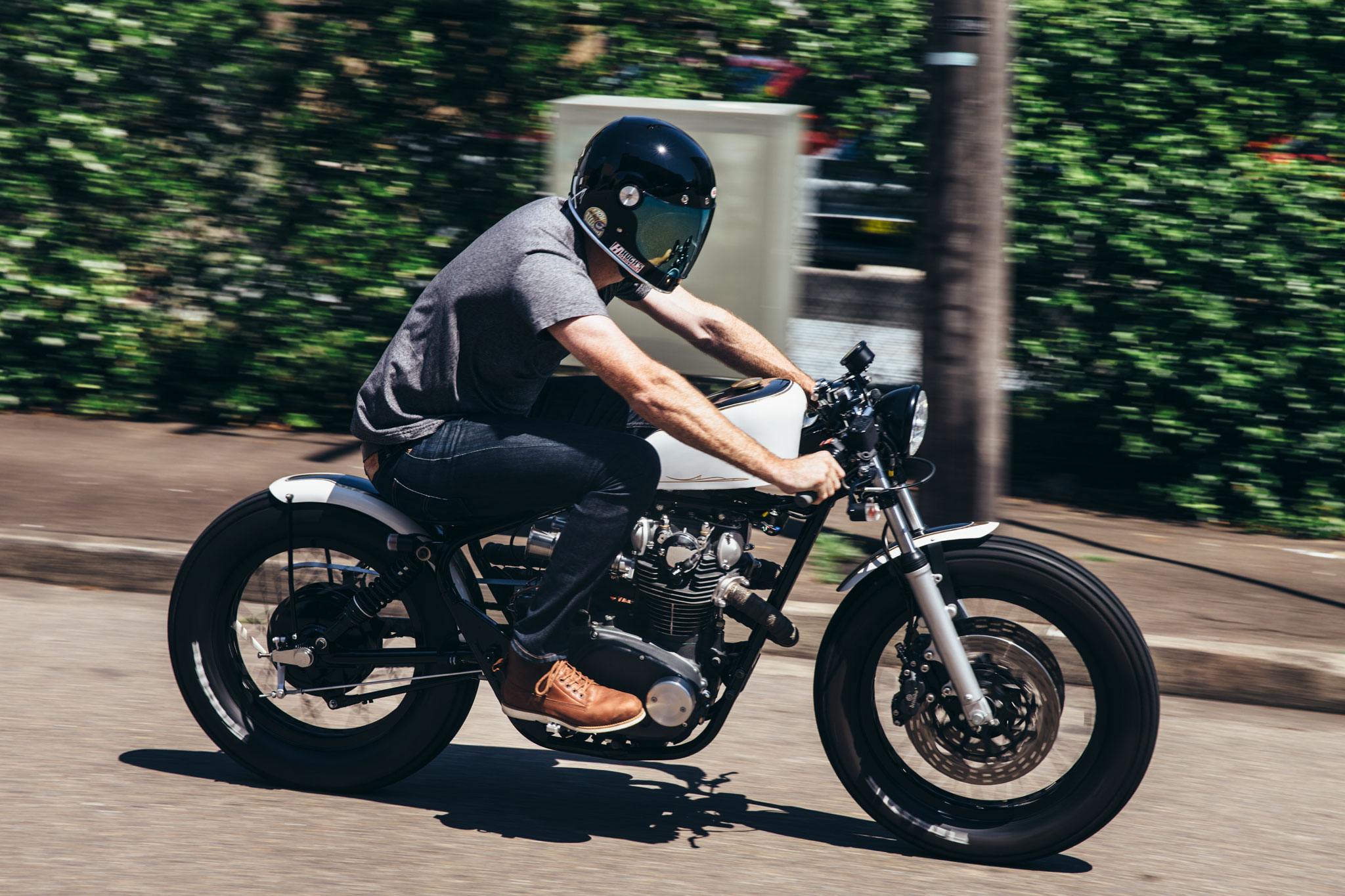