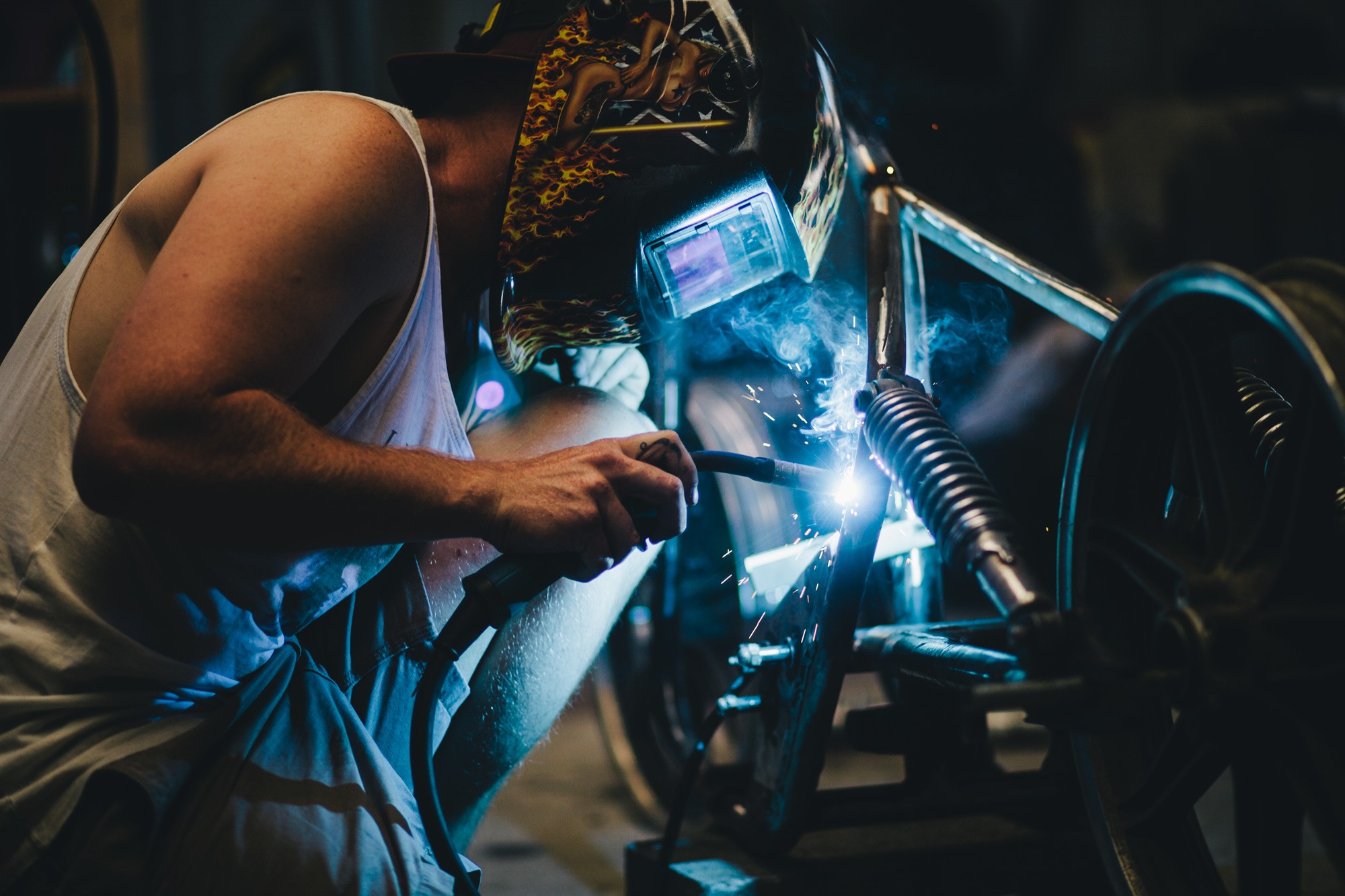 Jesse bought is first bike when he was 18 off a mate – a 1992 Kawasaki 125cc. It boasted no exhaust, brakes that didn’t work and no mudguards. Somehow, Jesse is still alive to this day, and thankfully so as he’s got some much nicer (and safer) bikes coming out of his garage at home.

This first bike of Jesse’s (read: Deathtrap) would get itself a makeover however, “Me and my mates, Daniel and Pat, tore that bitch down and painted everything black. We used old parts I scabbed off my brother-in-law’s Yamaha. We had it all ready for a camping trip we were going on, so we spent the whole night putting this bike back together, but we made a big mistake. We didn’t have our own utes or trailers back then and the bike wasn’t registered, so my mate Pat rode it down all the back streets and across the ferry in Port Macquarie. We were all set, driving ourselves in a car happy as larry when we get a call from Pat. He was ringing the bikes neck when the black beauty of a bike blew up! We had forgot to put water in the radiator!” 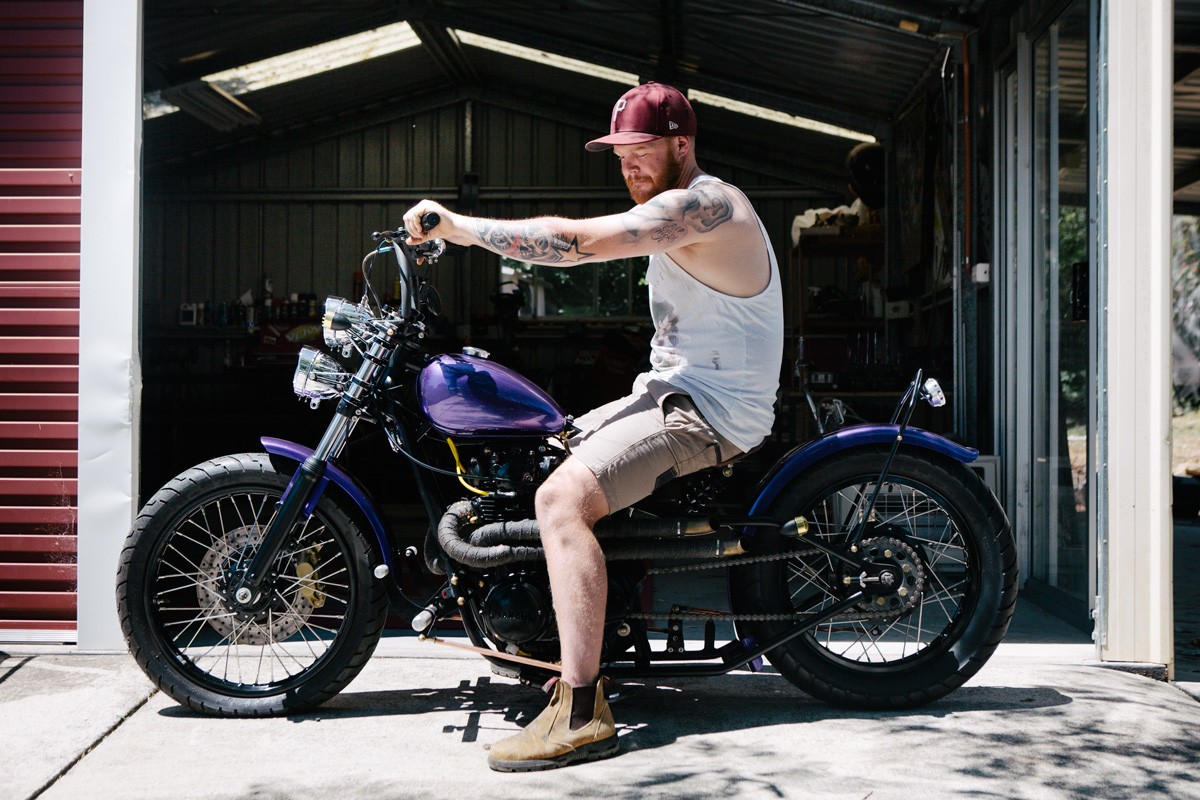 This didn’t matter to Jesse and his mates, they all had their fun in building the bike and creating something themselves. This would be what drew him to bikes and working on them – “Every time I pick up a socket or tear a bike down, it reminds me of the great memories when I first started on bikes with my mates”

Jesse stepped it up a notch after this, and got to work on a 1948 BSA C11 he got off his Dad upon moving to Canberra 5 years ago. “He found it in the back of a shed on a job he was doing, I was gonna make this a badass matte bobber. I started ripping apart this beast but soon I realised I bit off more than I could chew. Before my Dad had found the bike, it spent most of its life on a farm and had never been registered. It was full of leaves, dirt and old wasps nests. It would have been a great bobber, but it was a nightmare getting the parts for it. I ended up selling this bike, and got my first Yamaha XS650.” 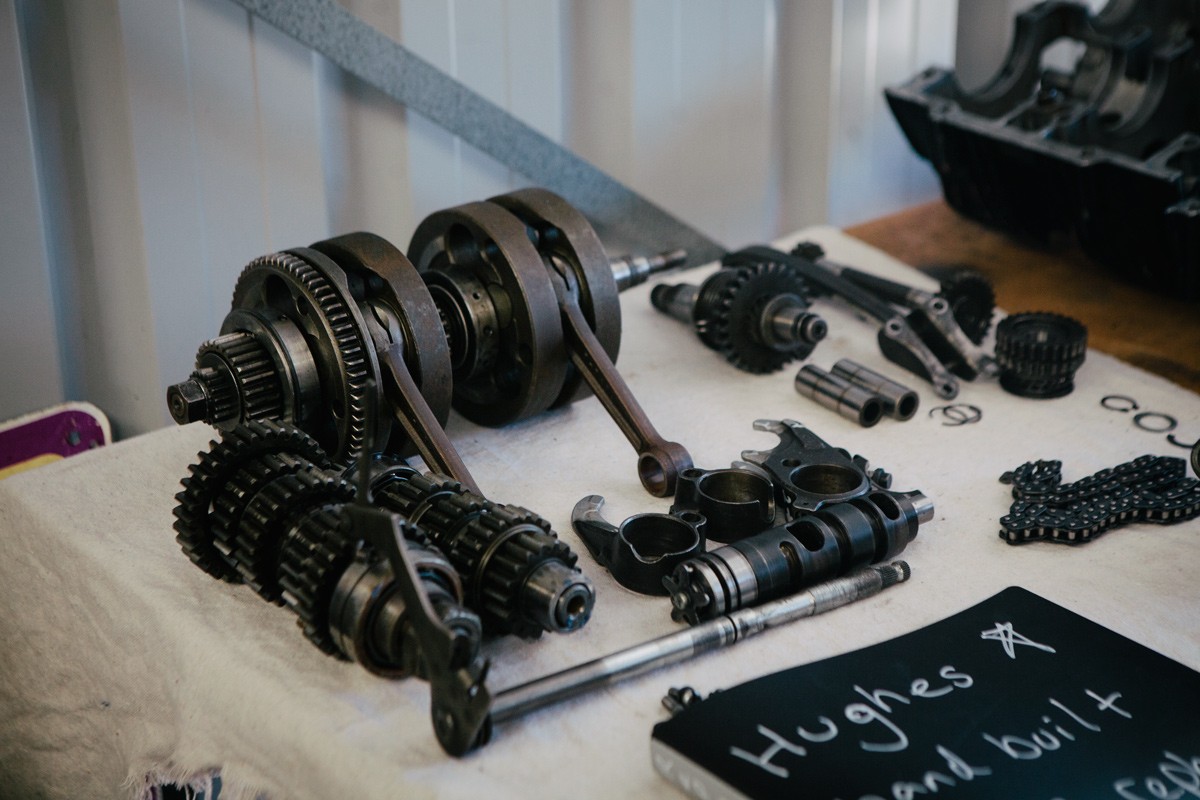 Normally Jesse’s garage is, as he admits, an absolute mess. There’ll be tools everywhere, parts thrown around, and mold growing in old discarded bottles of Corona but all that is changing. “I’m starting up my own business with my Dad, so the shed needed a make over. My missus got me some shelves and I cleared out all the useless shit. I try to spend every afternoon in the shed working on getting my new bike mocked up so I can ride, but as most people know it doesn’t always work out like that. I’m an apprentice plumber so I’m tired and broke for a lot of the time.”

Jesse’s had his fare share of learning curves and new skills since first pulling bikes apart, but perhaps one of the biggest he’s learnt is patience… well, that and grinding. “I’m really good with a grinder these days, and my metal working and designing skills are so much better than when I first got started. I can’t stop thinking of different things to do with my bikes!” 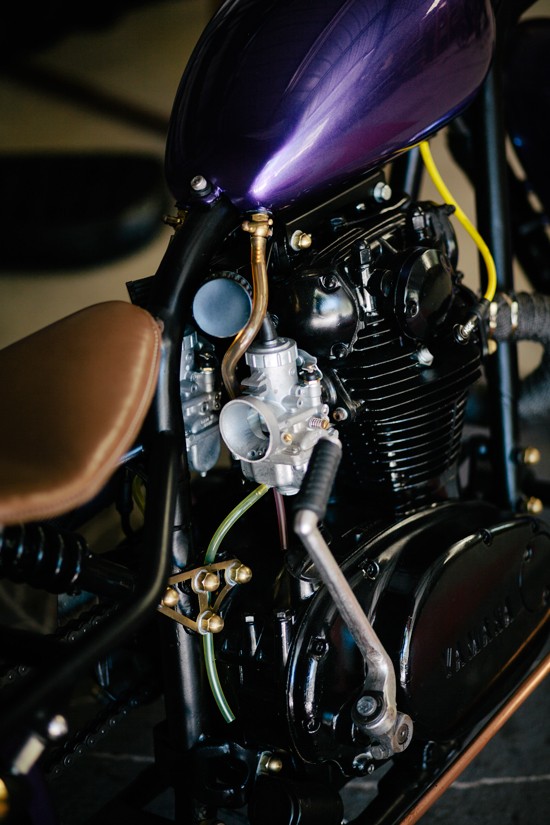 The crowning glory in Jesse’s shed is his purple XS650 Bobber which he got off a mate. “He had it sitting in his garage forever, I finally got it off him about a year ago. I’d seen some pretty awesome bikes built from XS650’s, so I was keen to rip into it! After I tore that baby down, I took at it with the angle grinder to trim the fat and clean up whatever I could. I went for the drop seat hardtail, added a 5-inch stretch and lowered it 3 inches. The bike is now over 2 metres long, and sits 130mm off the ground.”

The next project on Jesse’s list is, of course, another XS650. “This one is going to be a crazy brat with air bag suspension. I have already stretched the swing arm 3 inches and welded on a brat kit. Everyone keeps saying “Why air bags?” And the answer is basically I don’t want to have a kickstand on this bike. I’m going to put some rubber stops on the bottom of the frame and when I’m ready to stop and park, it’ll drop the bike on it’s belly. It’s going to look sick with the 18” cast rims I’m modding to fit this long schlong of a bike!” 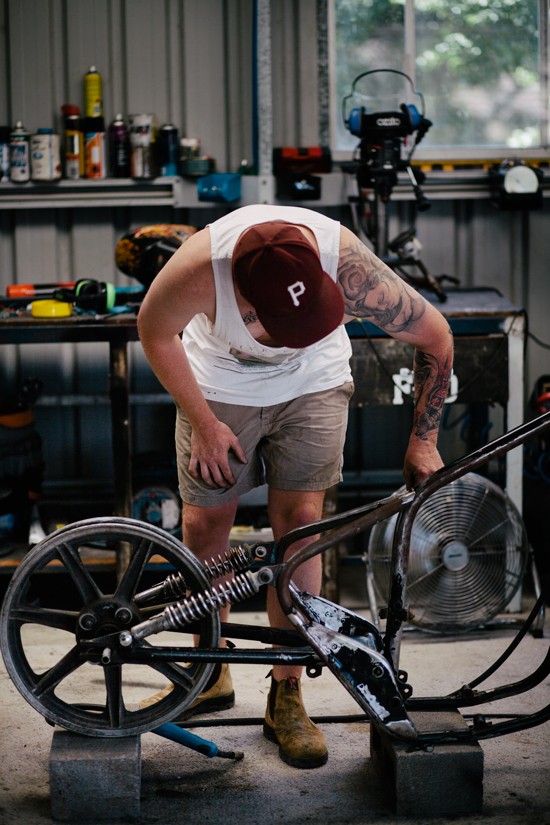 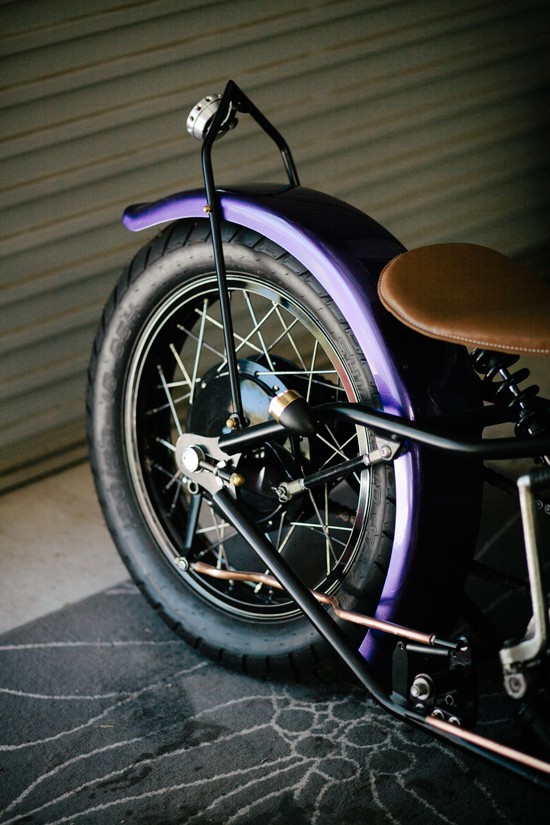 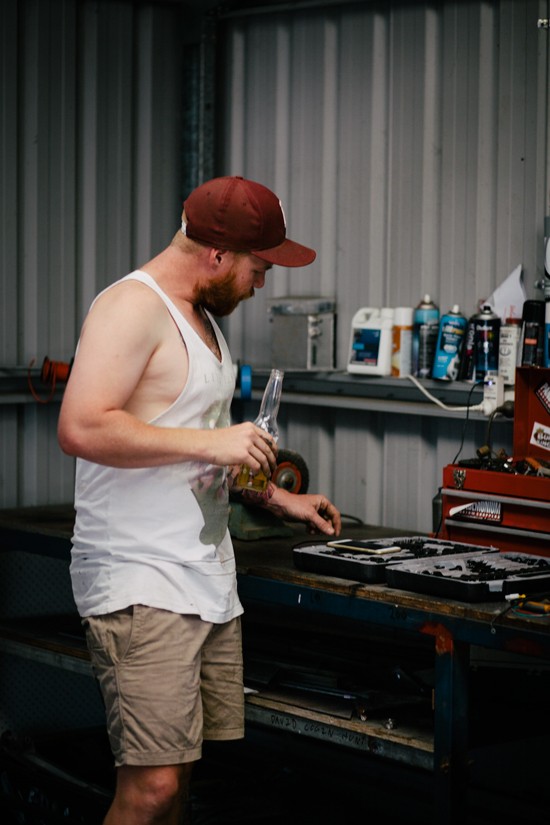 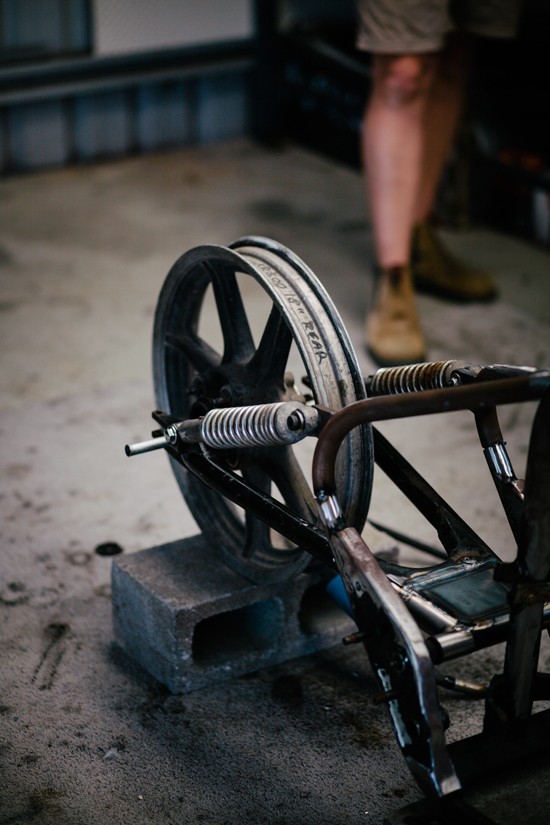 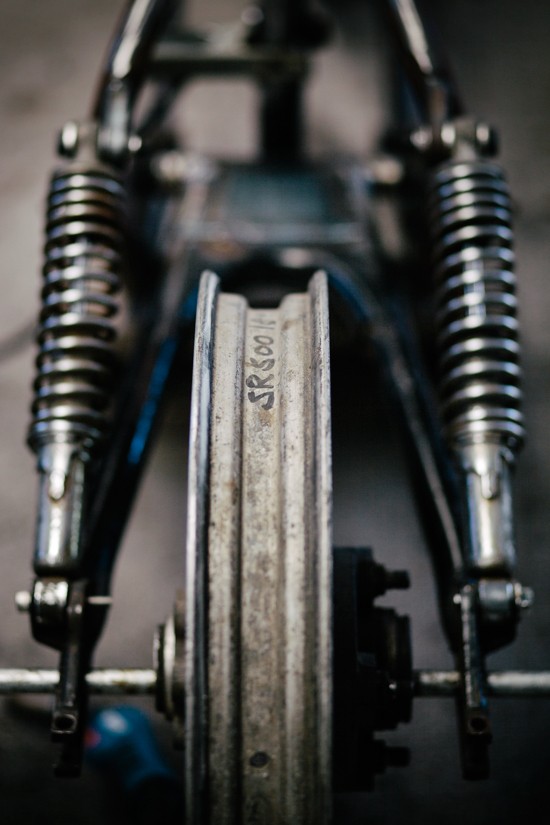 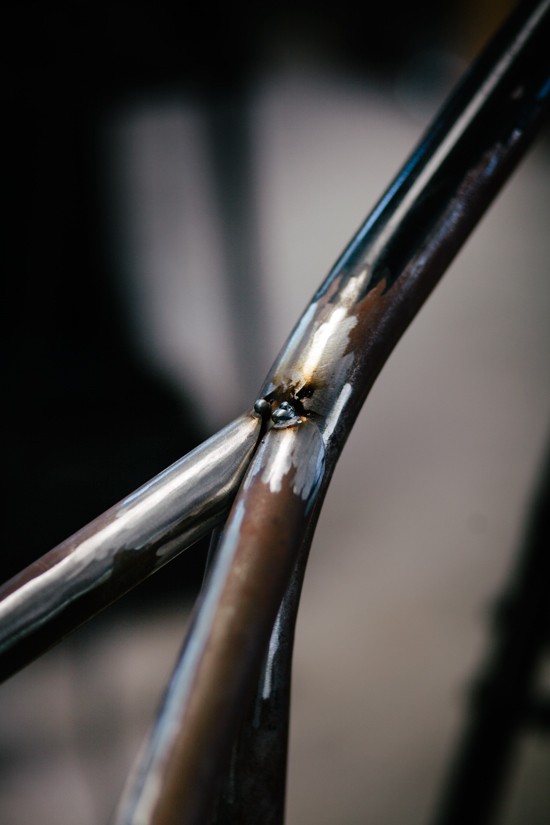 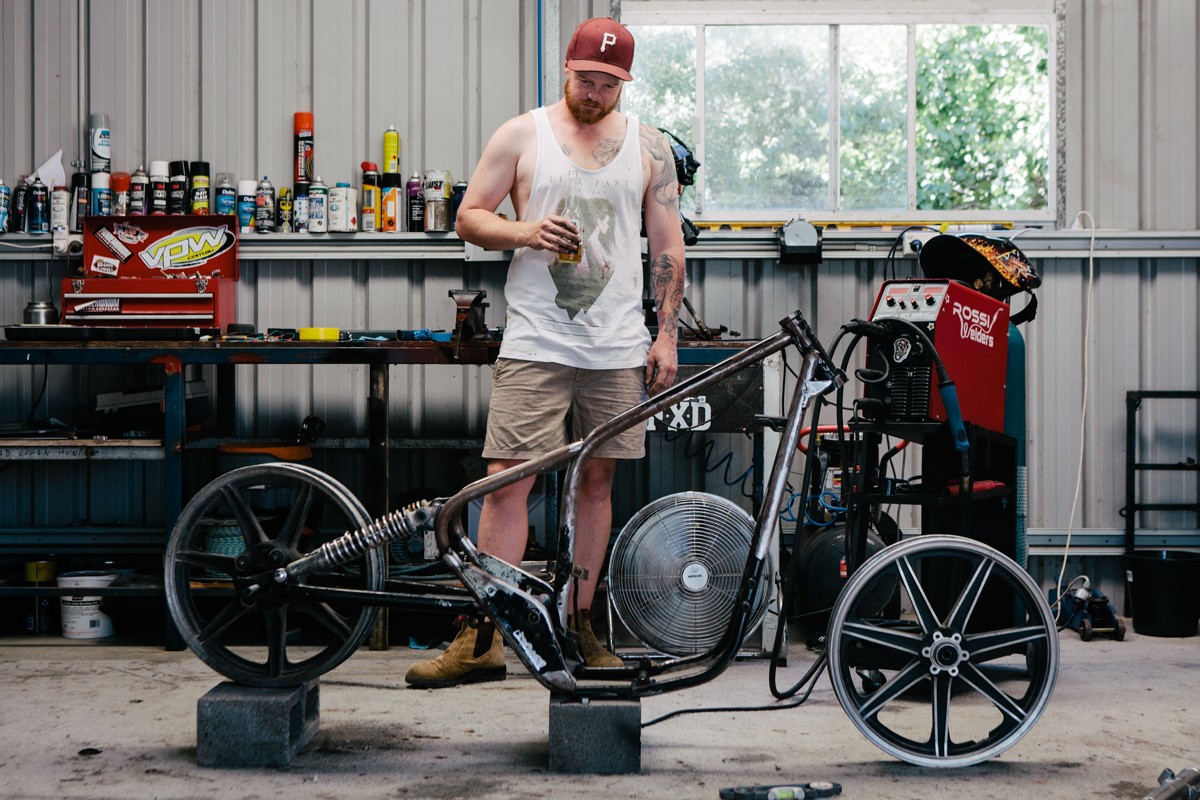 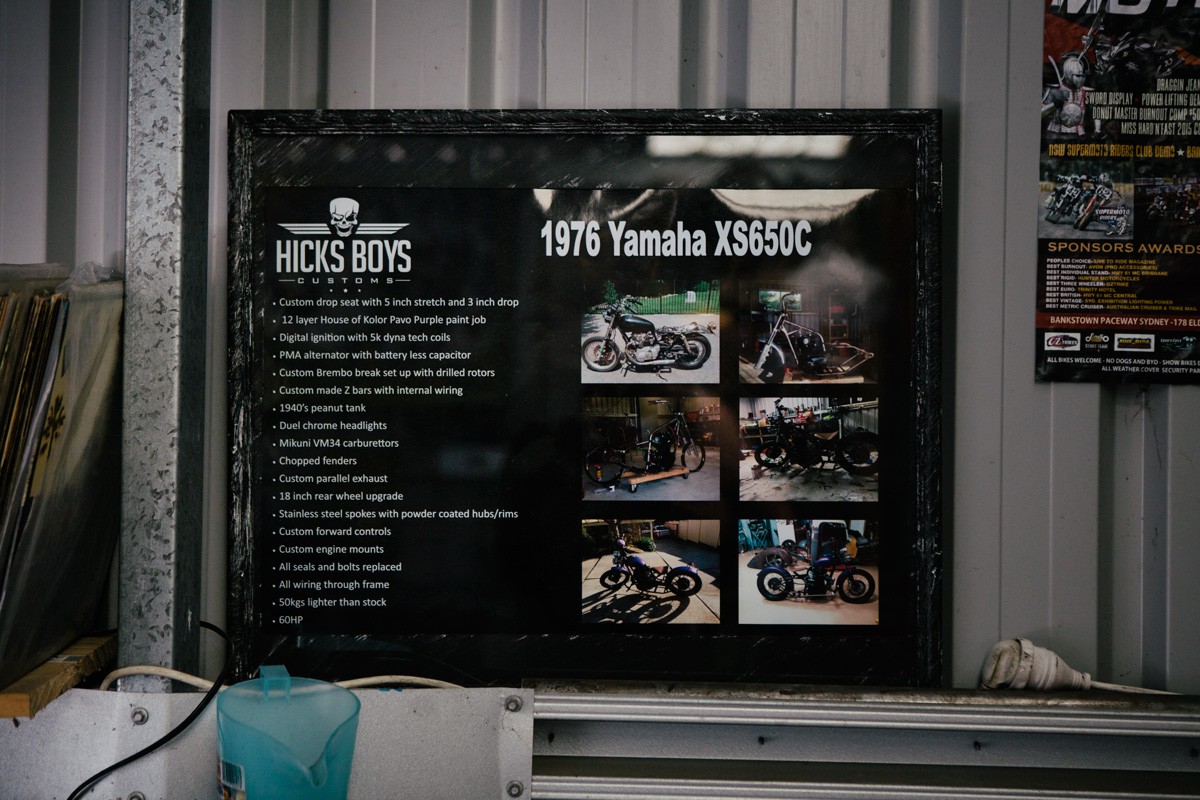 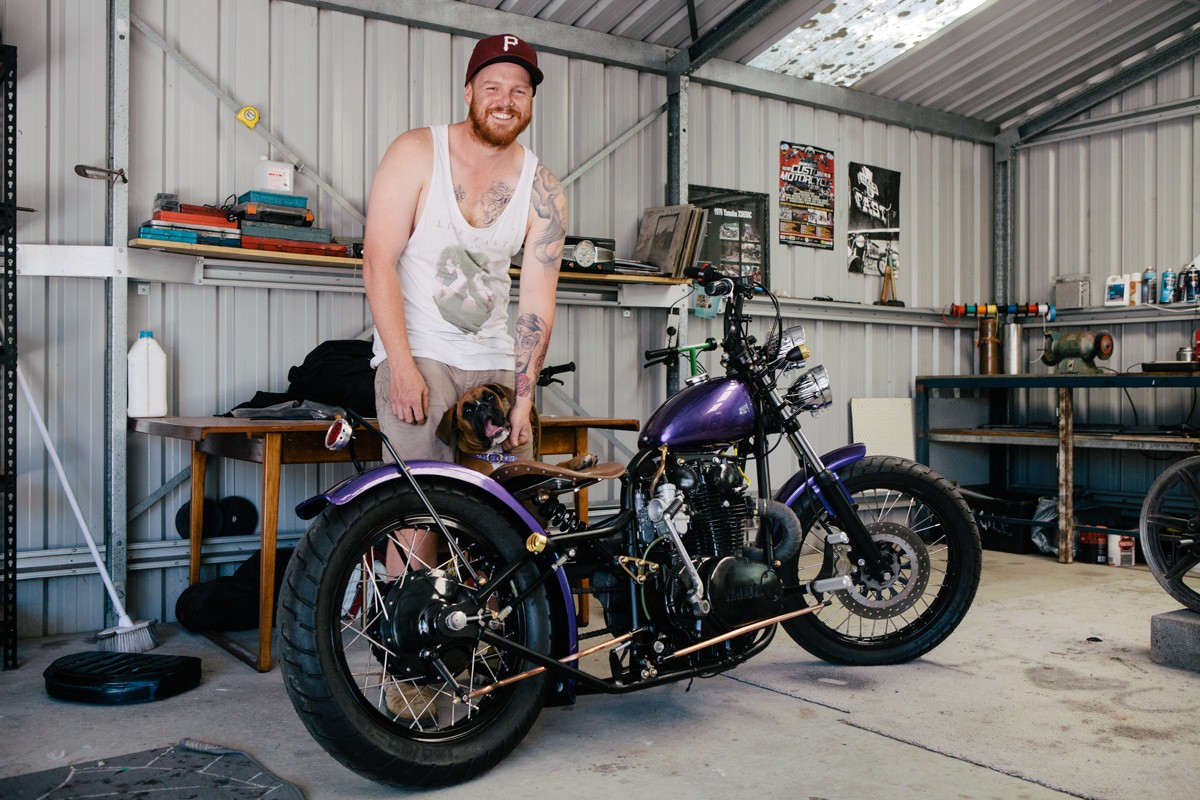 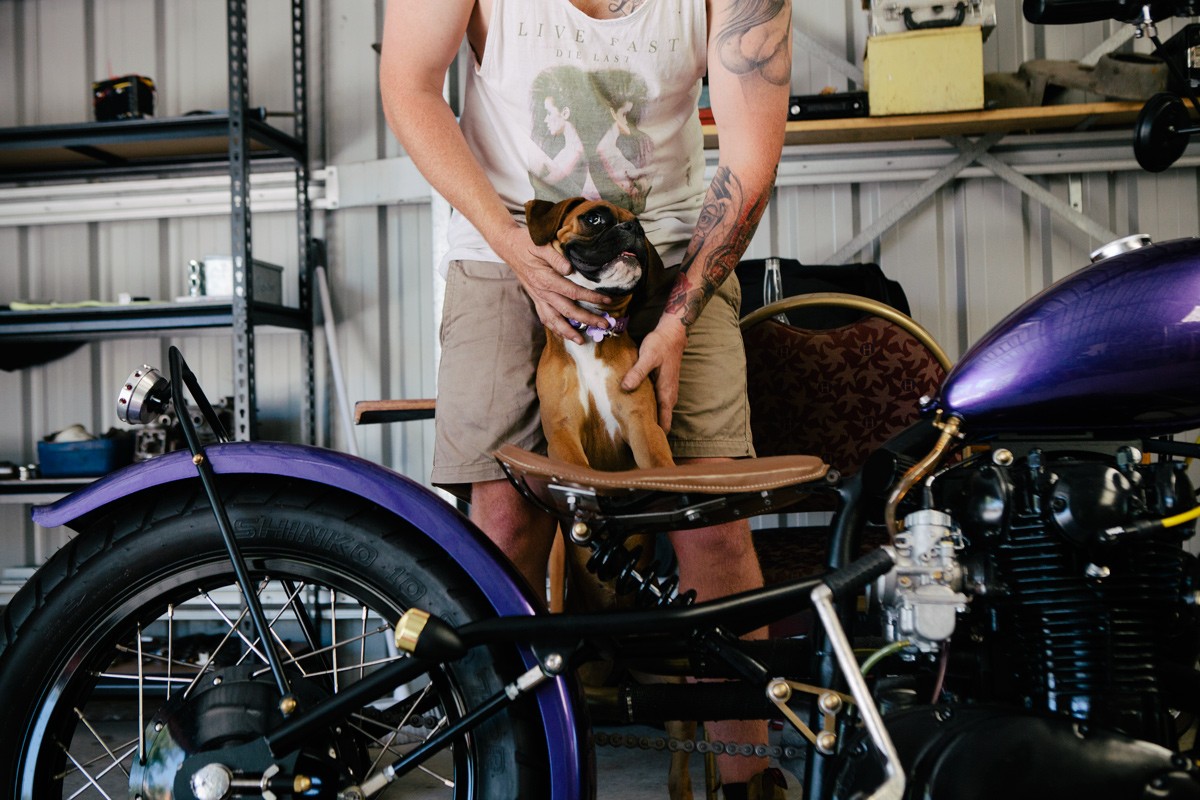 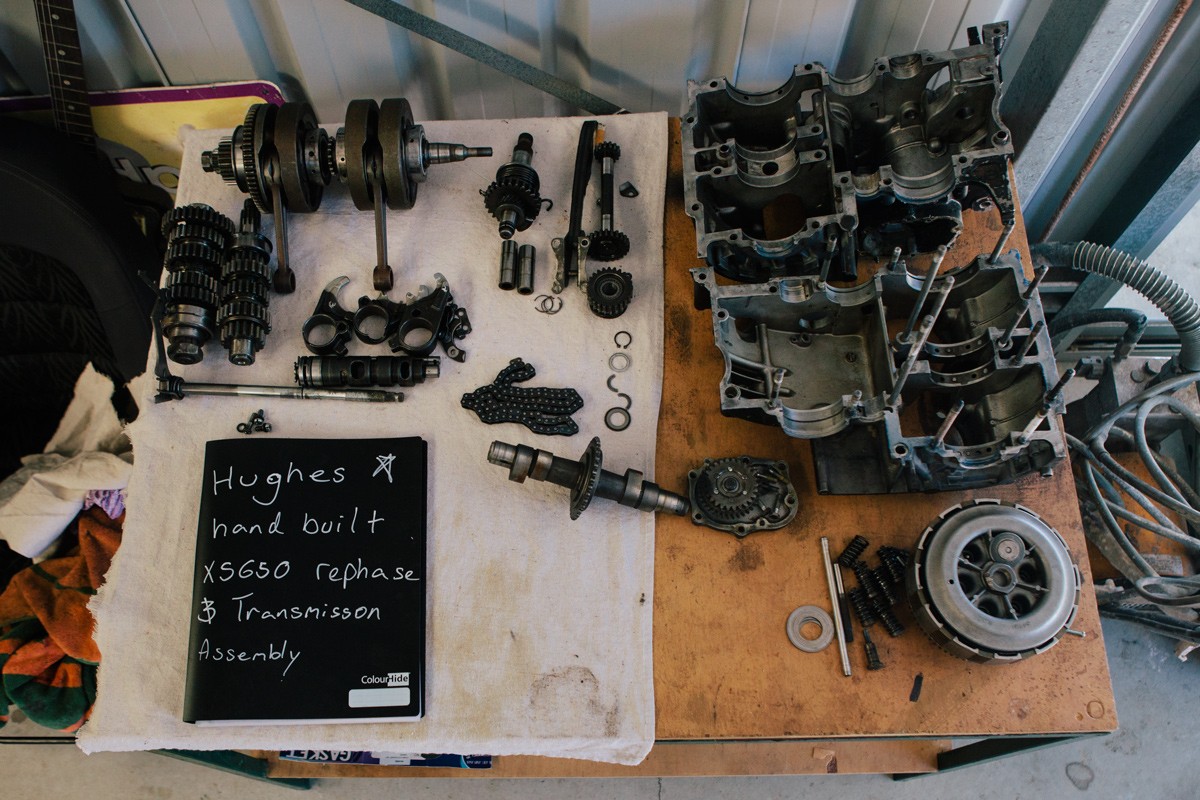 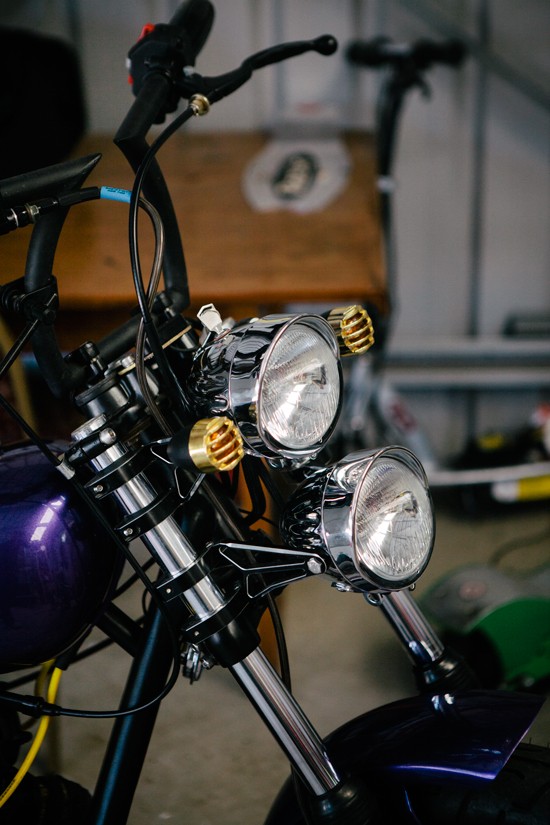 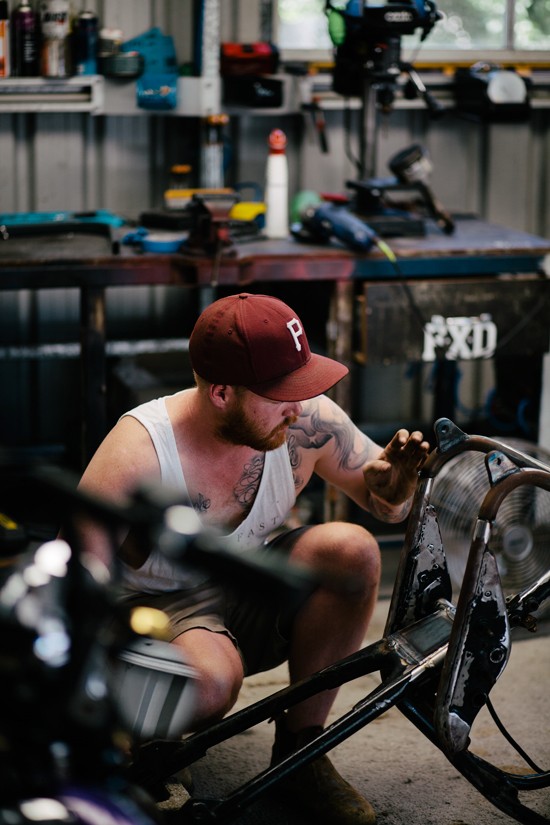 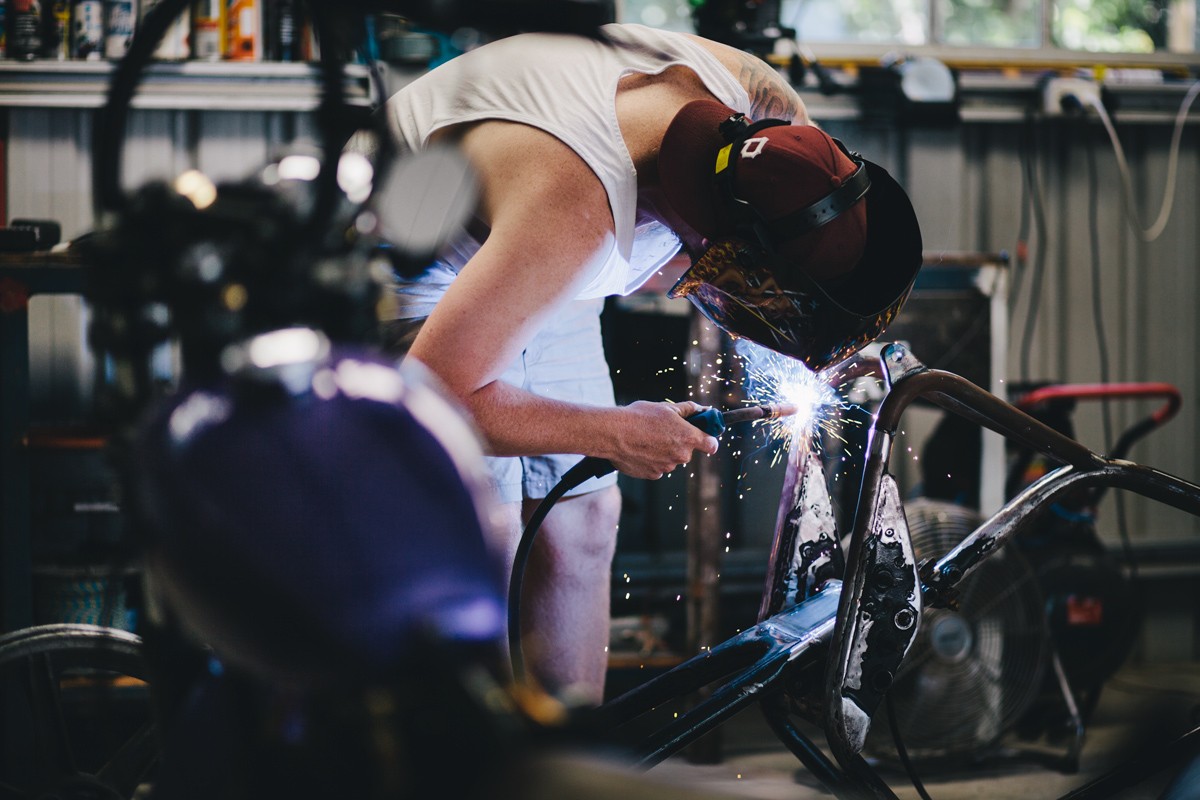 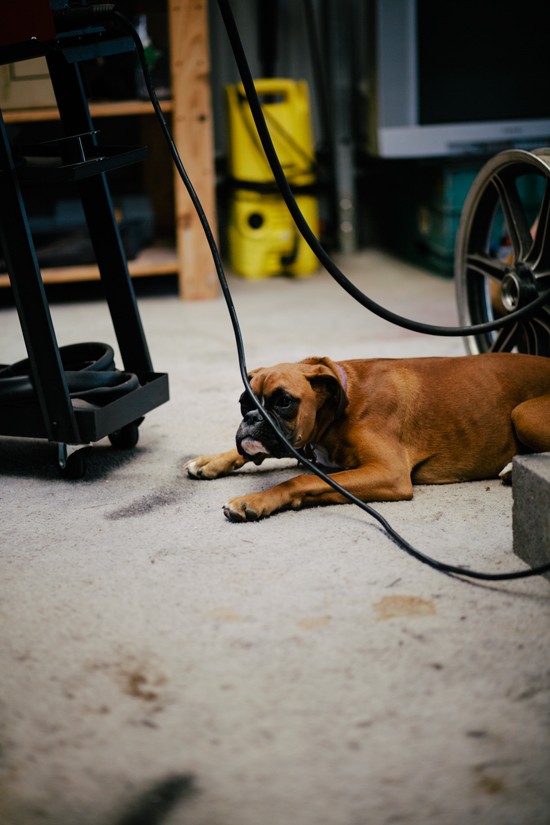 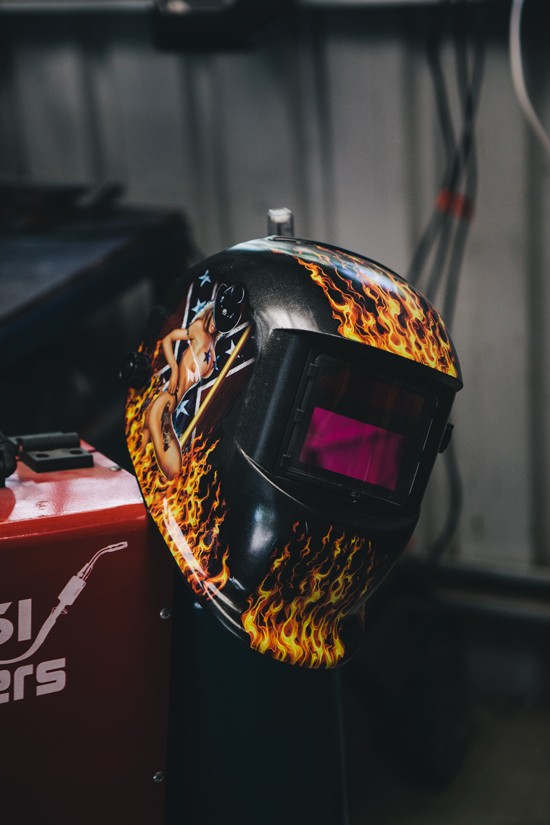