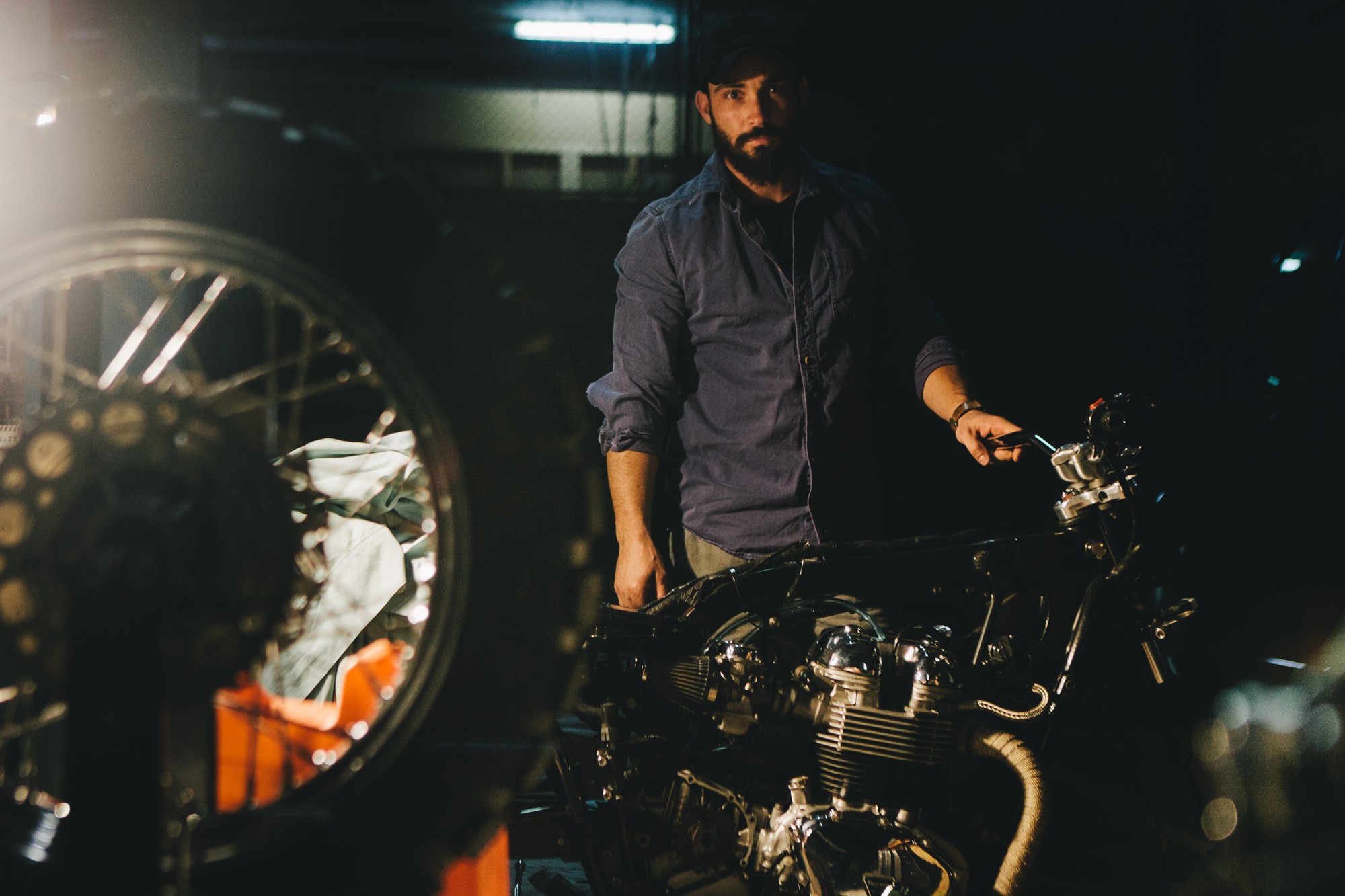 A chance encounter with a second hand leather jacket in Japan would be the catalyst for sparking inspiration and a new look at motorcycles for Tremayne, as he gradually steered away from crotch rockets to British café racers.

Tremayne today has come a long way from his first time riding solo on a bike, at the tender age of 6 back home in Western Australia. “I remember some kids a little older than I were riding little peewee’s in the bush near our homes so I’d tag along. Eventually one of them offered me a ride so I gave it a go. I sat on the bike, pulled the throttle back as far and quickly as I could and off went the bike!… about 5 metres down the dirt path. I, on the other hand, went about 2 metres to the left, into the bushes, crying. I’d grazed my leg or something, and so I ran back home a bit embarrassed and didn’t really look twice at bikes for a while.” 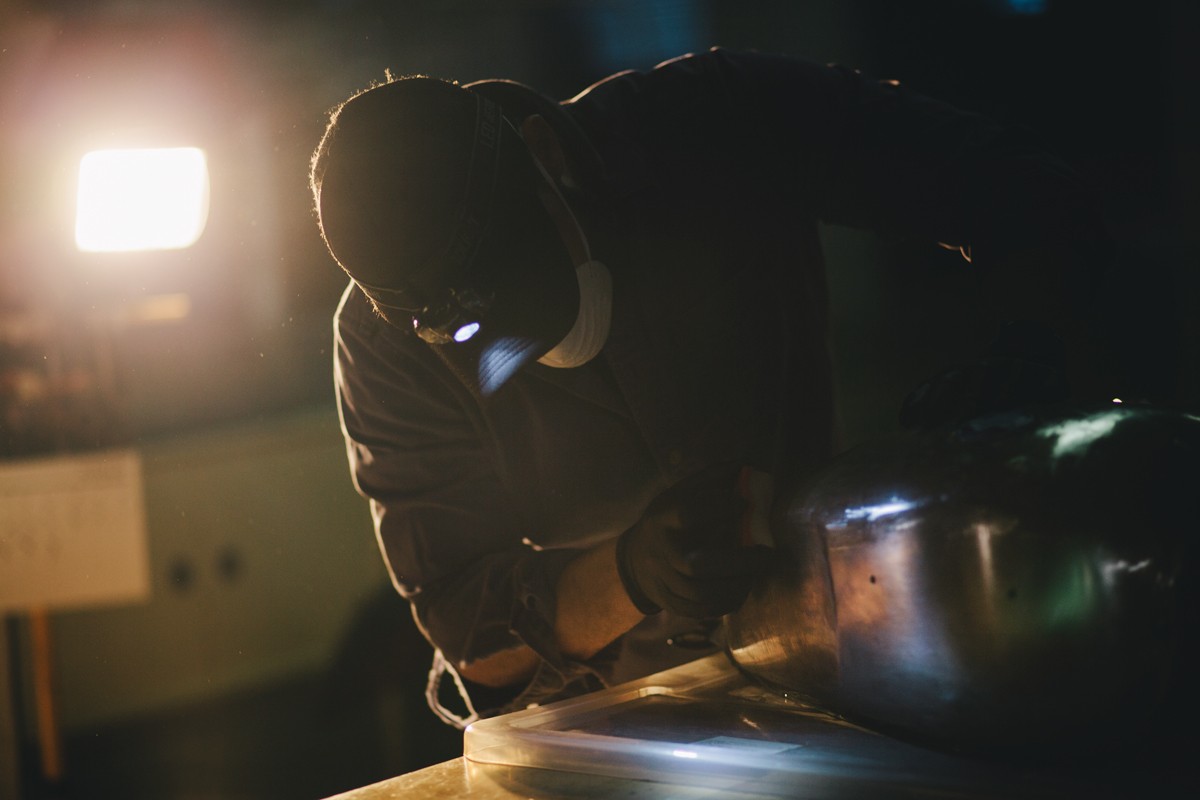 Fast forward some years and bikes were back on the menu, with less stacks and tears this time however. After expressing interest in road bikes, Tremayne’s best mate pushed him to get his licence. Once he successfully grabbed his learner licence, he bought a Kawasaki ZZR250 which he affectionately named ‘Duckie’, due to it being a ‘Kwaka’. “I did some decent riding on that thing, rain, hail or shine. I had an absolute ball riding that bike, it’s still one of the most fun bikes I’ve ridden, ringing that little 250cc’s tits off!”

More sports bikes would follow as Tremayne got more and more into riding, and bikes. It was a trip to Japan that would change things however, this was where he would begin to dive into the world of old-school cool and Steve McQueen. “There I was in a second hand clothing store in Hiroshima, Japan, looking at this second hand jacket. I picked it up, tried it on and thought it was the coolest jacket I’d ever seen. It was waxed cotton and it was different to every other jacket I’d seen or felt. I looked at the logo patch on the sleeve and it said ‘Belstaff’. Then I looked at the price and it was way over what I was willing to spend, but the name of the jacket and that style stuck with me and got some cogs turning in my head.” 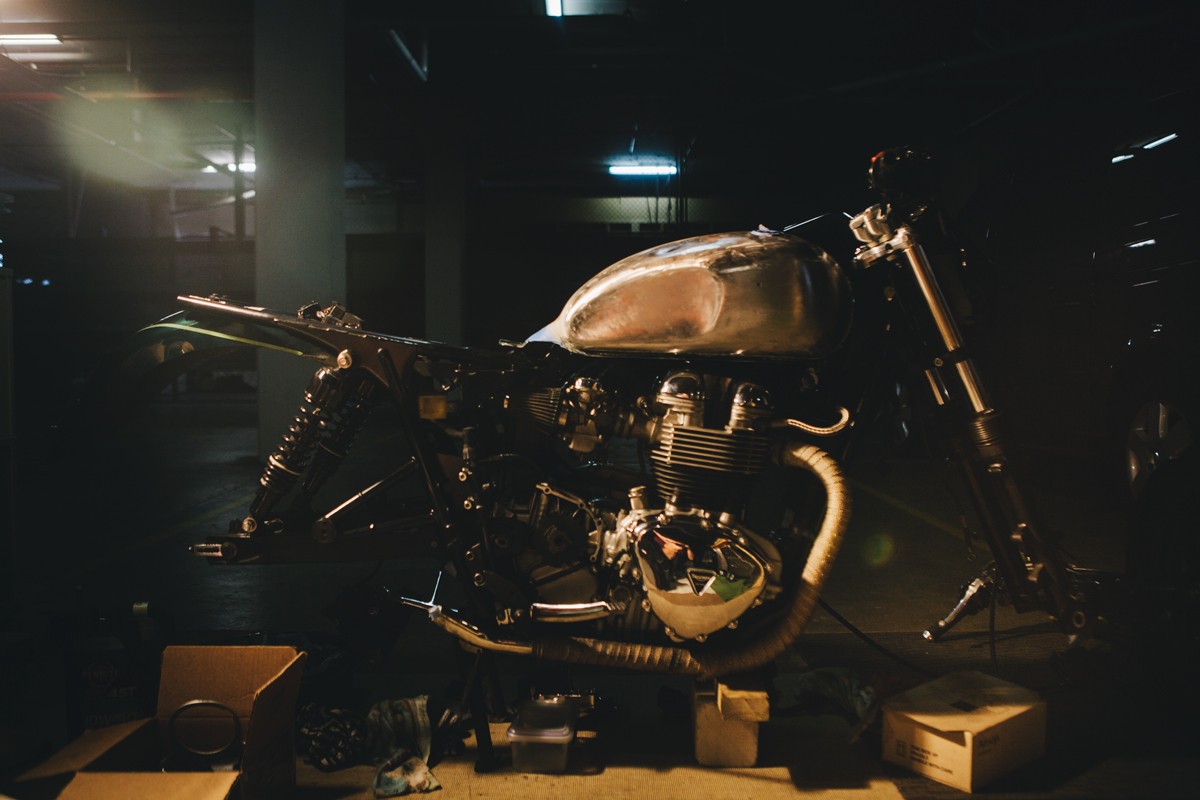 The ingredients for Tremayne’s passion were slowly gathering, with ideas of old-school cool being planted and a whole new world of creativity about to open up. A trip to Japan had started all of this, and now a trip to England would cement it. “I hired a Bonneville from a bloke up in Carlisle, just south of Scottish border. This was my first Bonnie. I rented her for 7 days, and rode up the west coast to the Isle of Skye and back through the highlands to Edinburgh – eventually I made my way over to the Isle of Man for the TT. I flogged the crap out of that Bonneville, I did 4 solid laps around the TT course and loved every minute of it. My first lap was at 5am as soon as I hopped off the ferry, I had nowhere to sleep or stay so I figured I’d ride! I had the track completely to myself.”

It wasn’t until towards the end of 2014, just after Tremayne got married, that he had to sail away again for another long deployment in the Royal Australian Navy. He took a book with him to read during this time away, ‘The Classic Motorcycle by Universal Magazines’. It would be this book that introduced Tremayne to the history of nearly every bike manufacturer and the old-school classic bike. “It went on about cafe racers and how they came about and then BAM! that was it. I was hooked after that, and knew I wanted to be involved in that scene when I got back to Sydney. That’s when I came across SCR online and they accepted me with my Ventura-packed almost bog-stock 2003 Bonneville I had picked up a few years earlier. It must have been the exhaust wrap that got me in!” 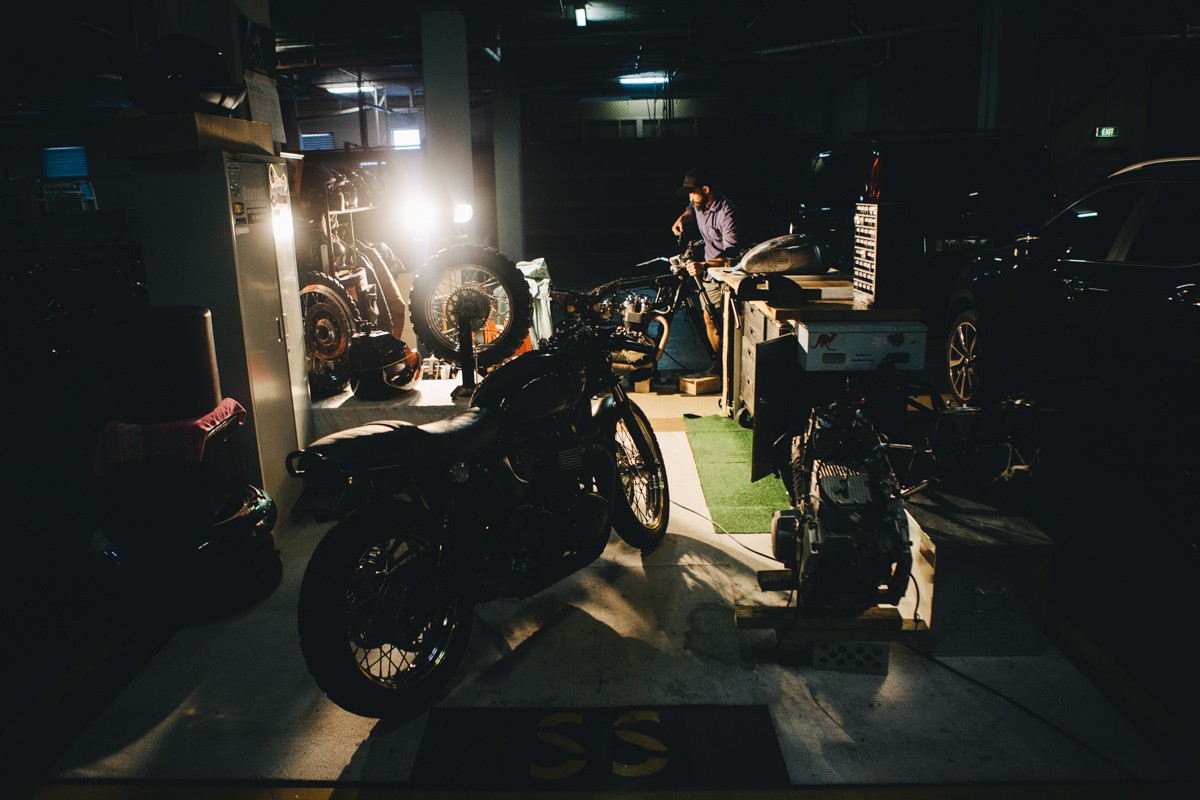 After crashing this first Bonneville, Tremayne still had the bug for British bikes and got himself a 2006 model this time, dubbed ‘The Royal Mongrel’. This would be the bike he would customise, and shed off its stock skin. There would be one tricky bit however, where to do this work? He had no lock up garage, but he did have a parking spot in his apartment block, designated lot SS. This would be the birth of SS Garage. From here it would be learning day by day, from the tried and true Haynes manuals to the more modern and ever expanding wealth of information Google and Youtube. Tremayne’s history being an Electrical Technician in the Royal Australian Navy would provide him with the knowledge and experience to get a quick grasp of how things work.

“The SS Garage just came from the love of hands on work. I do it nearly every day in the Navy but more electrical side of things. I do like it tho when I start playing with grease and hand tools on some of my equipment, there’s a real sense of manliness about it. So it’s just transferred over into a hobby, putting my passion of fabricating and hands on work into motorbikes.”

Recently Tremayne and his mate picked up a Yamaha TRX850, which will be going under the café racer knife soon enough as it currently sits in SS Garage in pieces. “It’s about to get an R1 front end and tail put on. Both of my Bonnie’s are in the garage space as well, with my first one in pieces as I work on it for Aftershock 2016. The custom bug has bit me… hard. I just try and make do with what I’ve got around me.” 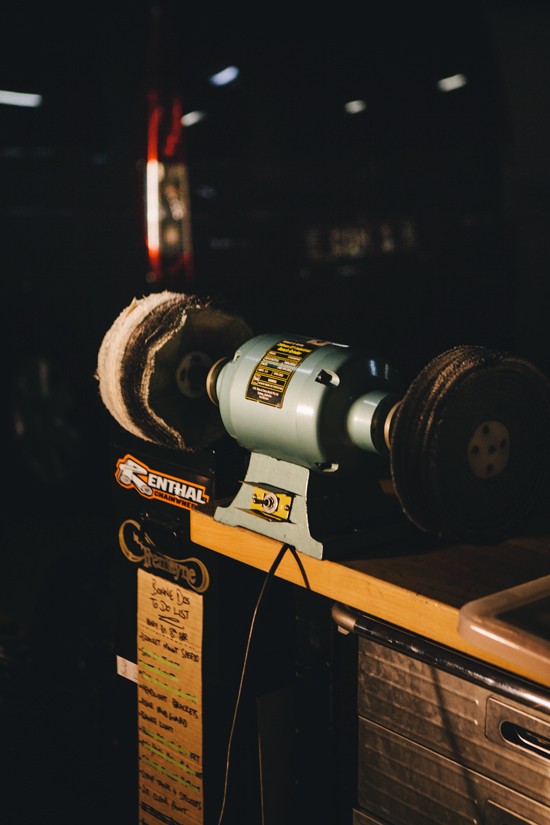 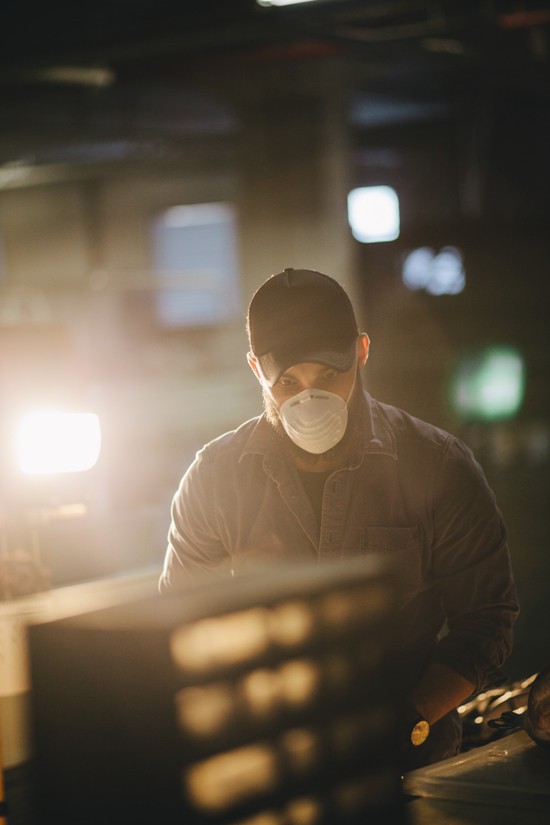 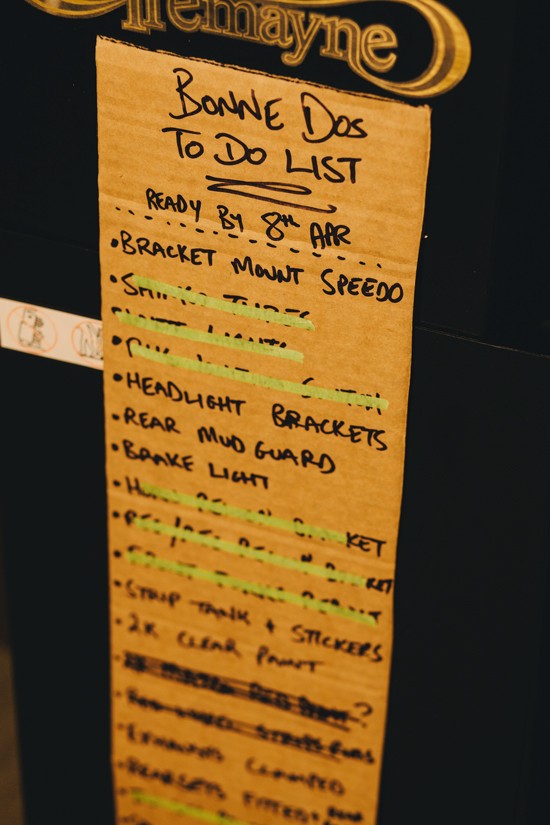 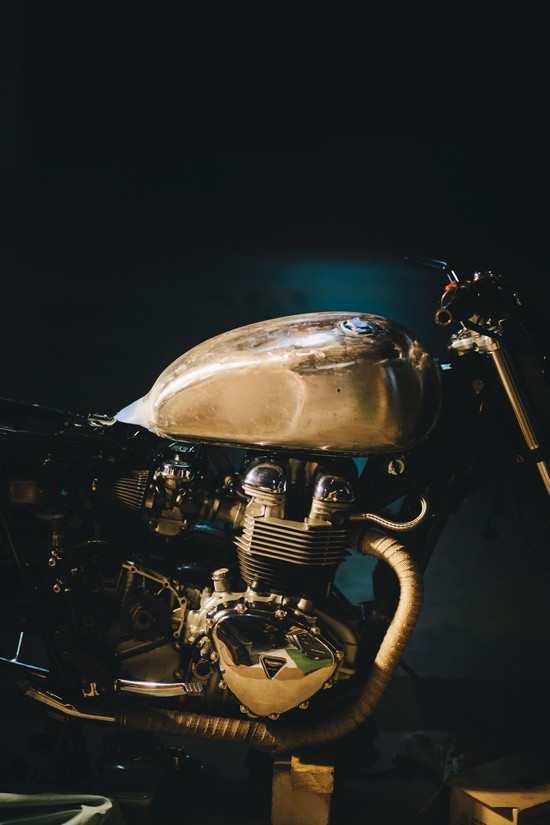 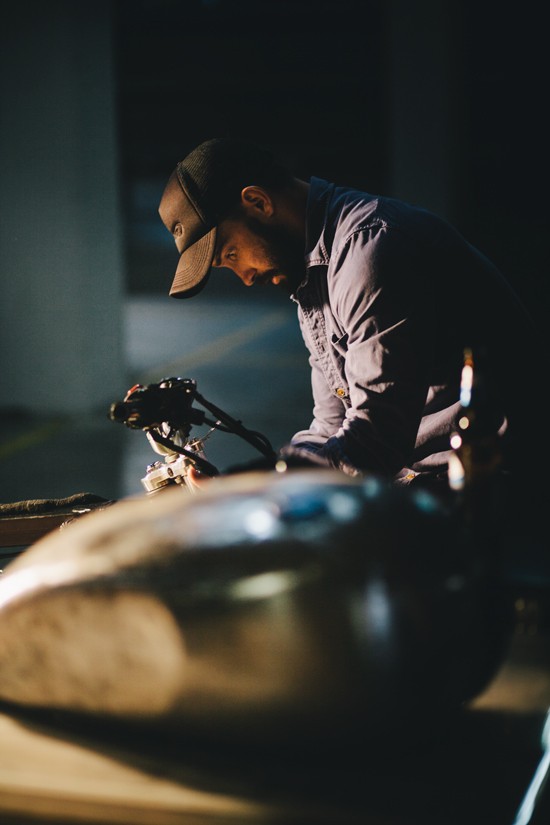 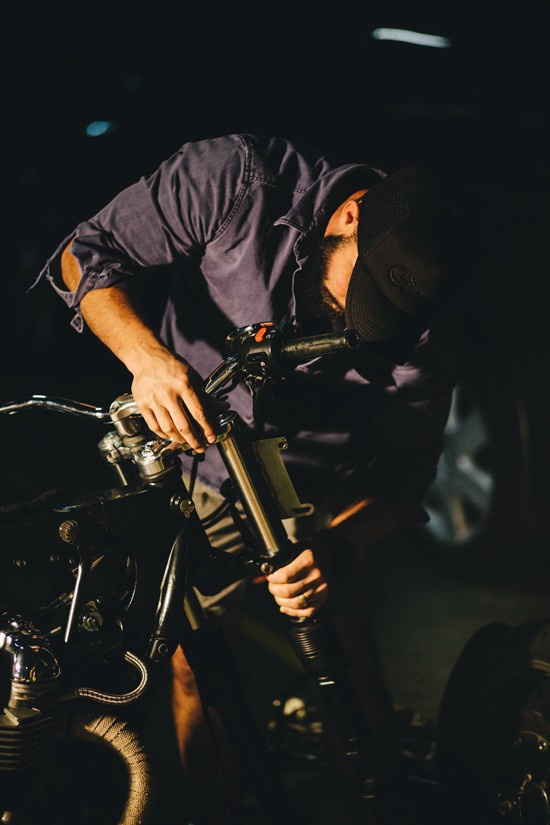 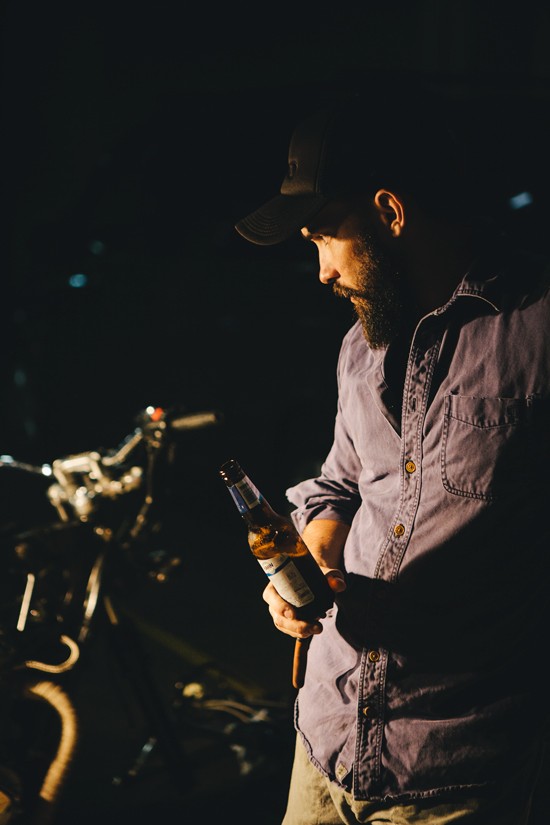 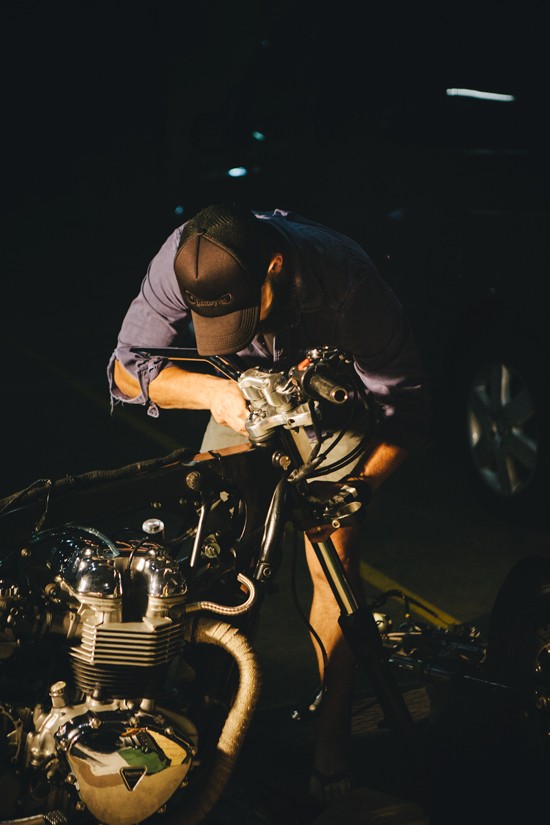 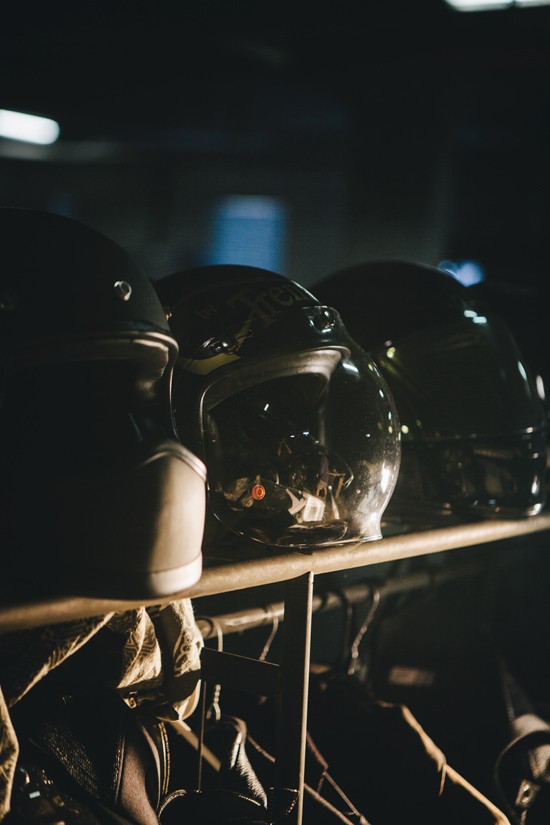 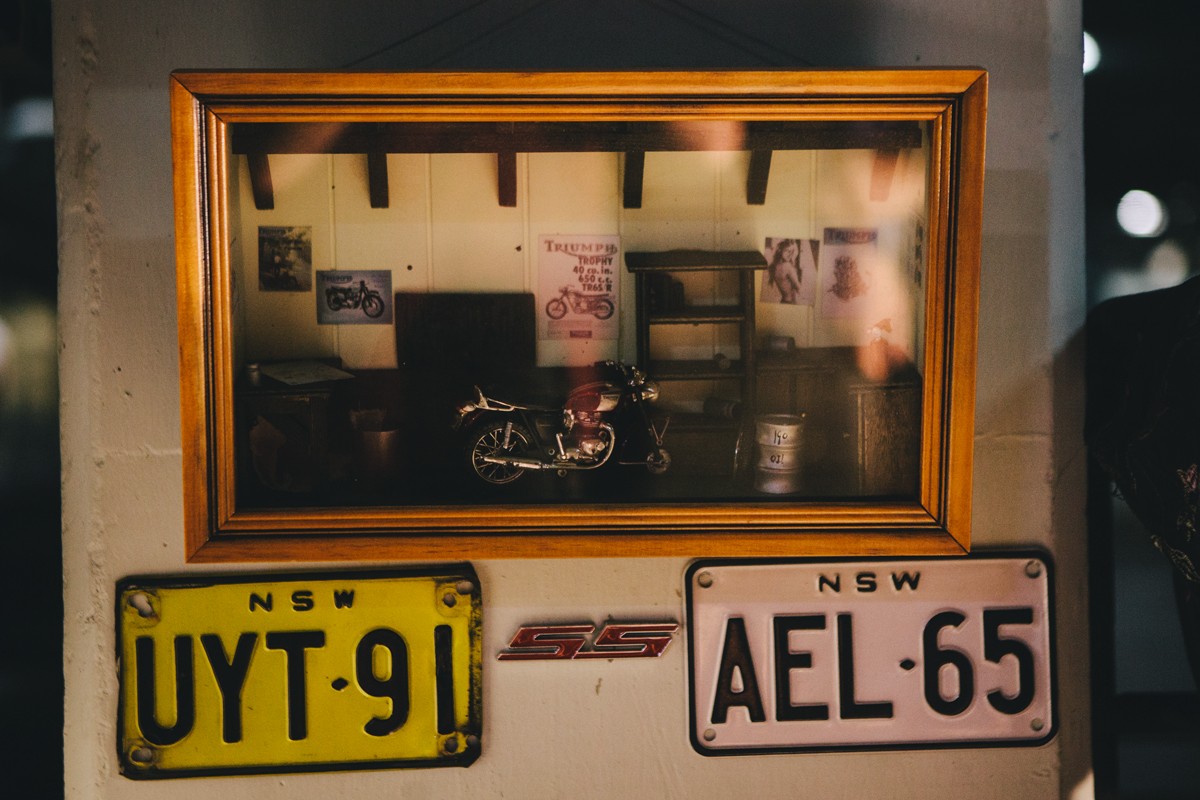 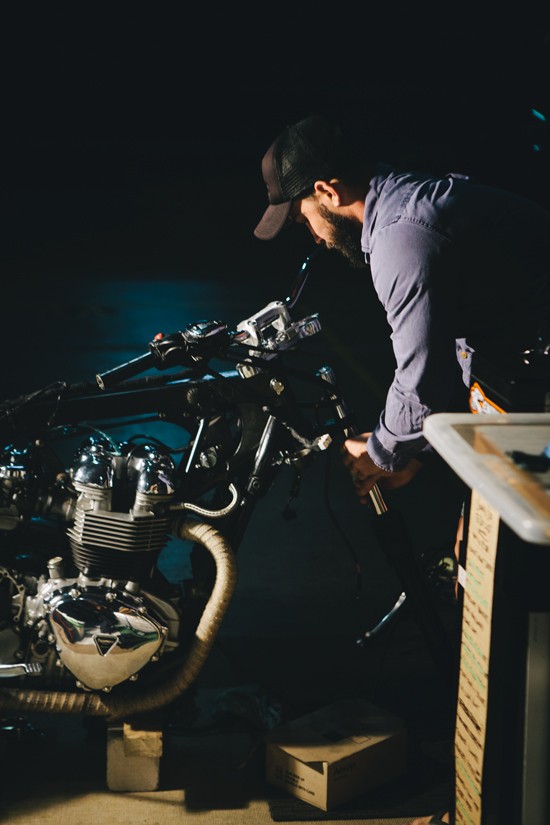 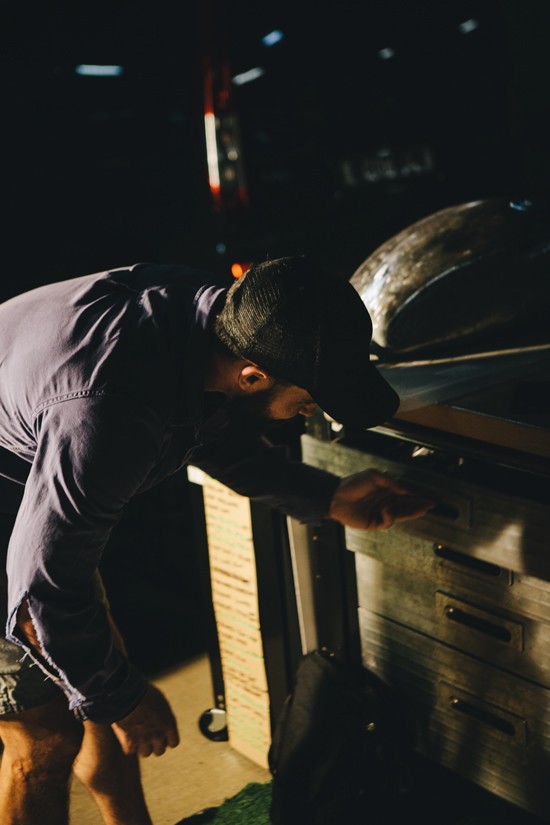 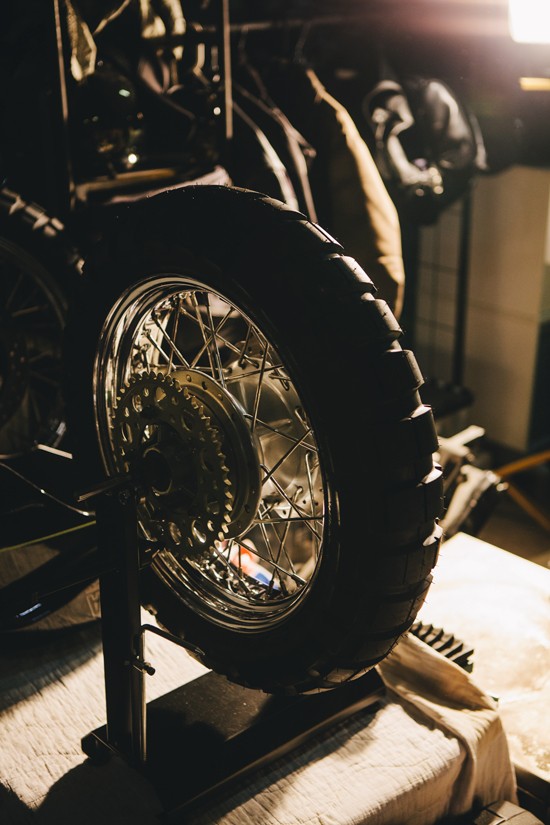 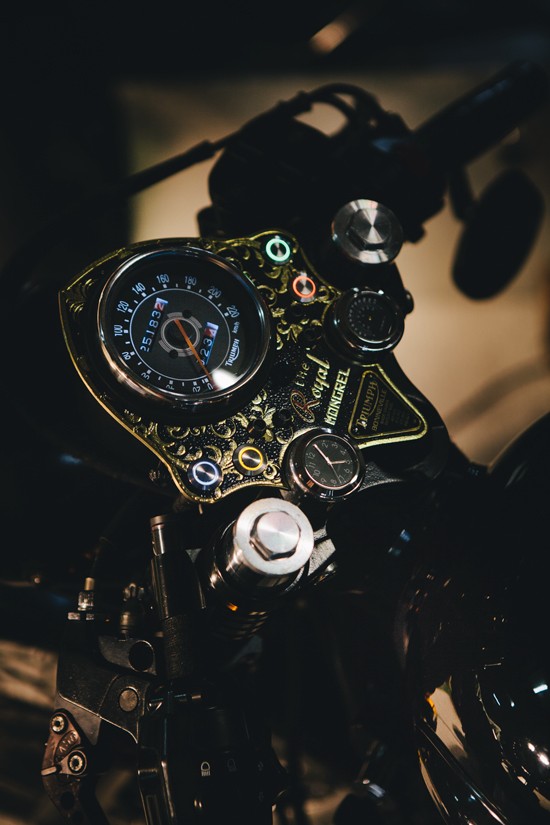 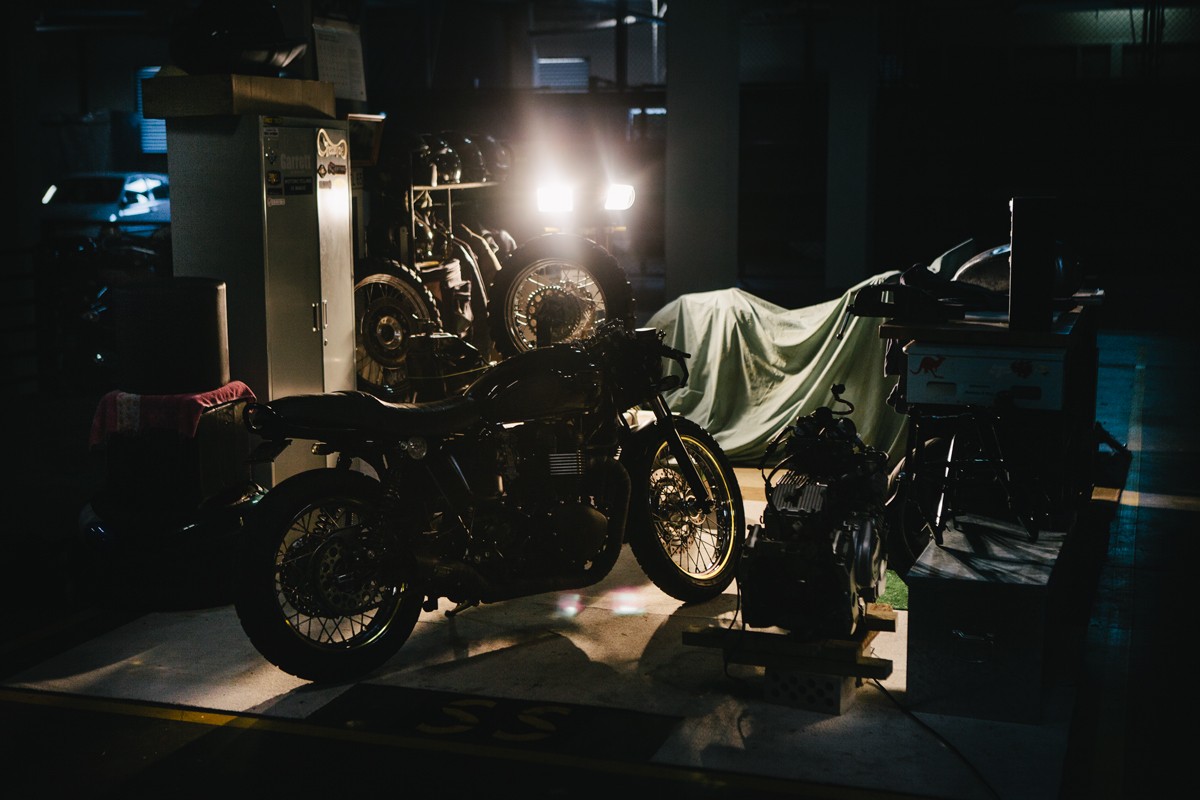