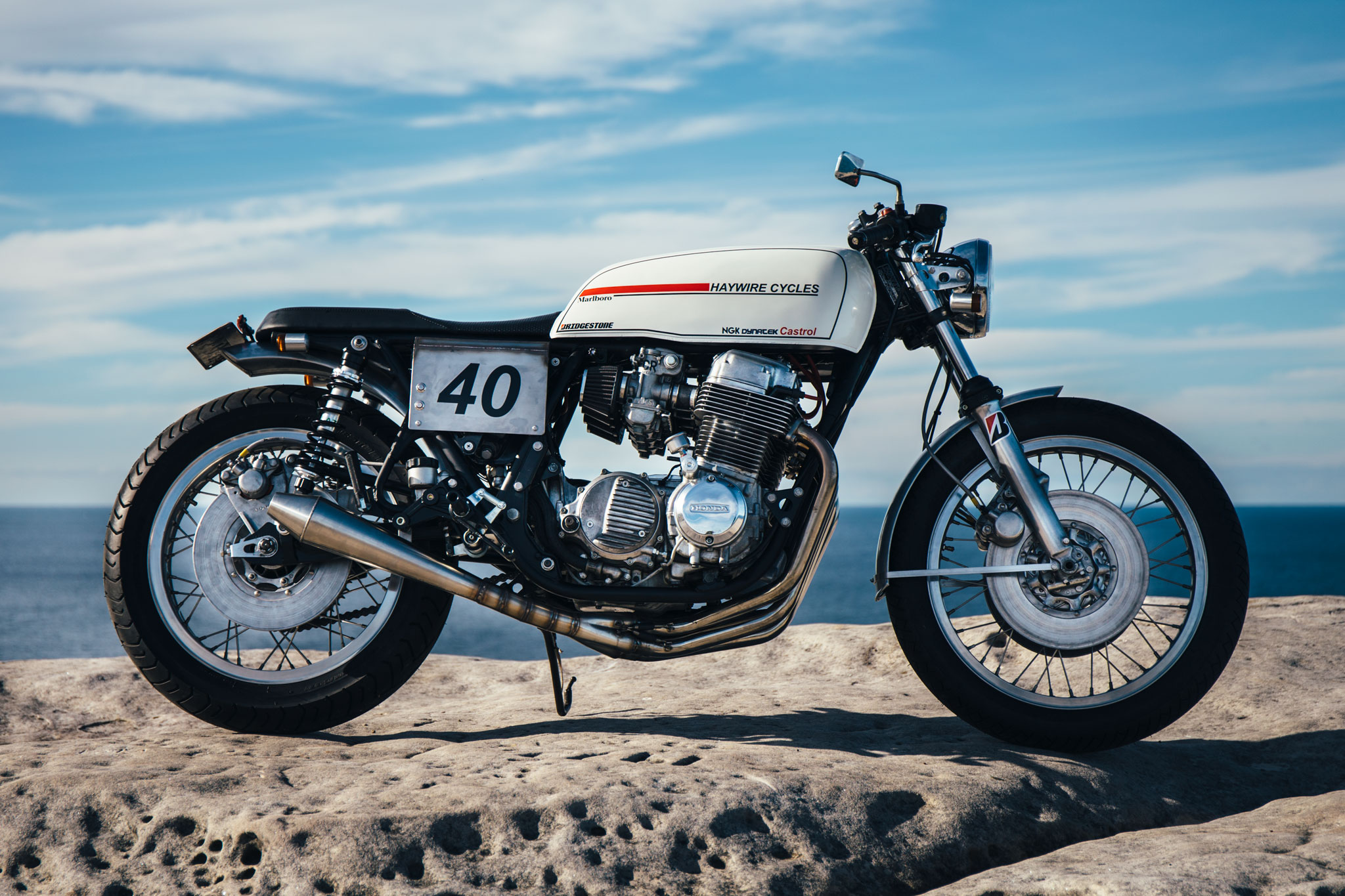 While working in his grandfather’s factory, a love affair for old machinery would begin for Lars. Throw in a 1970’s Honda, and the marriage would be complete. 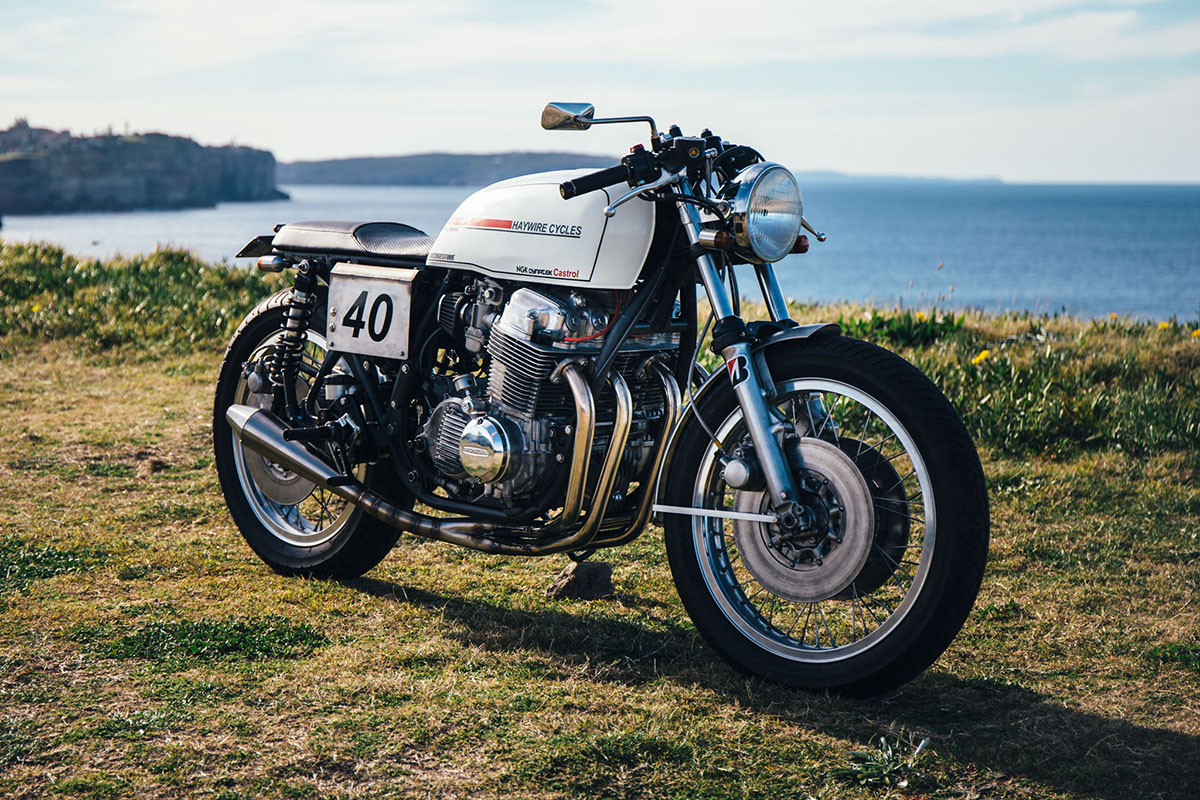 Being surrounded by the old machines in his Grandfather’s aircraft factory would form an important part of Lars’s life. It would be here that the simplicity of some of the old machinery would turn fascination into obsession. “Upon discovering that a machine output speed was adjusted by manually changing the gear ratio by movement of a belt, this led to me counting the number of teeth on each gear, and calculating the speed of each combination. Needless to say, I wasn’t very productive.” 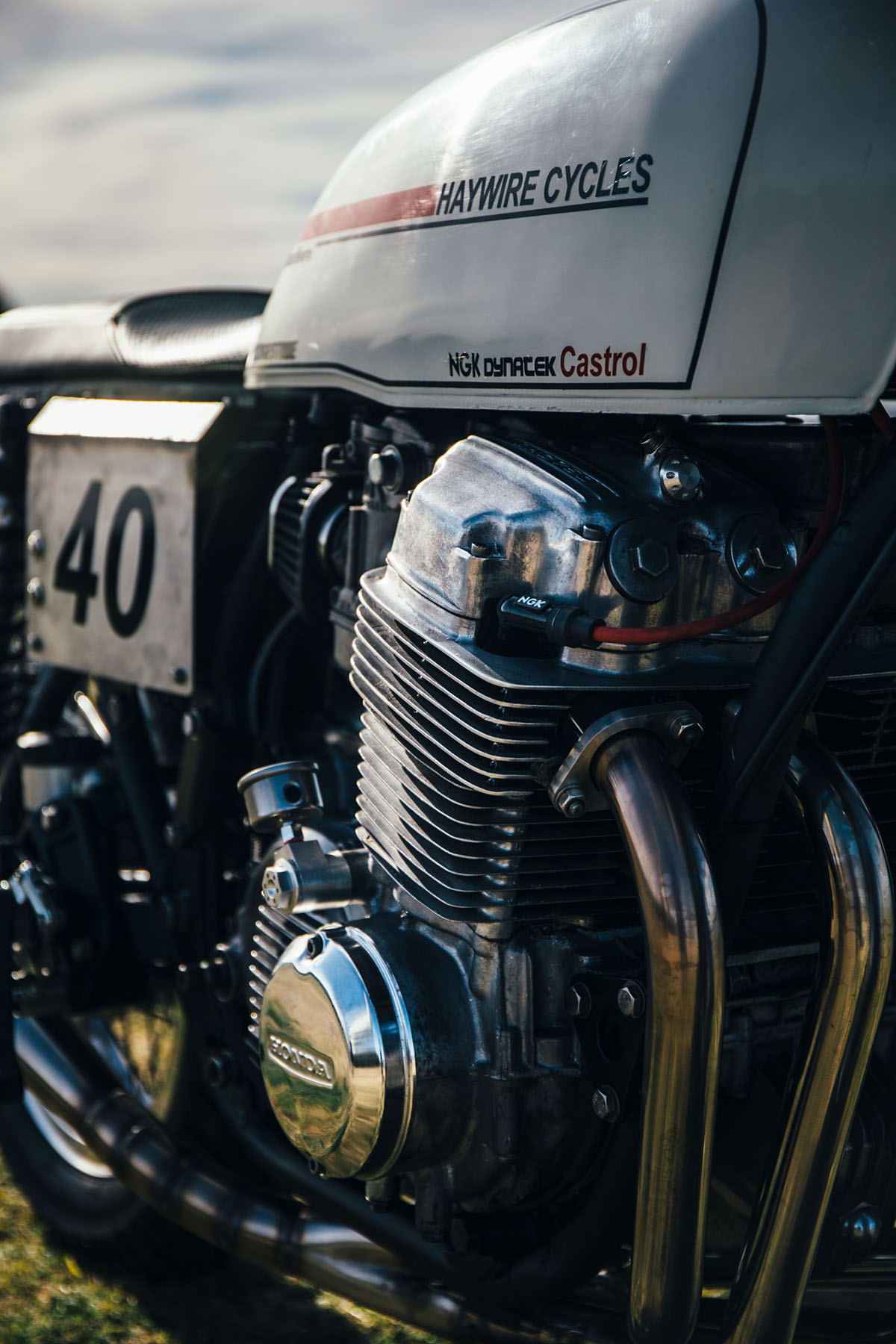 Teeth-counting aside, some more productive things would be in store for Lars. Having picked himself up a 1975 Honda CB400F, the simply air cooled engine which was laid out bare and on show would be something that suited his tastes perfectly. “I had picked it up just wanting something for convenience, riding it to Uni and making the parking around Bondi easier. At first the bike seemed too heavy and fast, but that didn’t last long and soon I had developed a new obsession with speed – something I’d never had when driving a car. The more my skills improved, the smaller and easier this 400F was to throw around. I needed something bigger.” 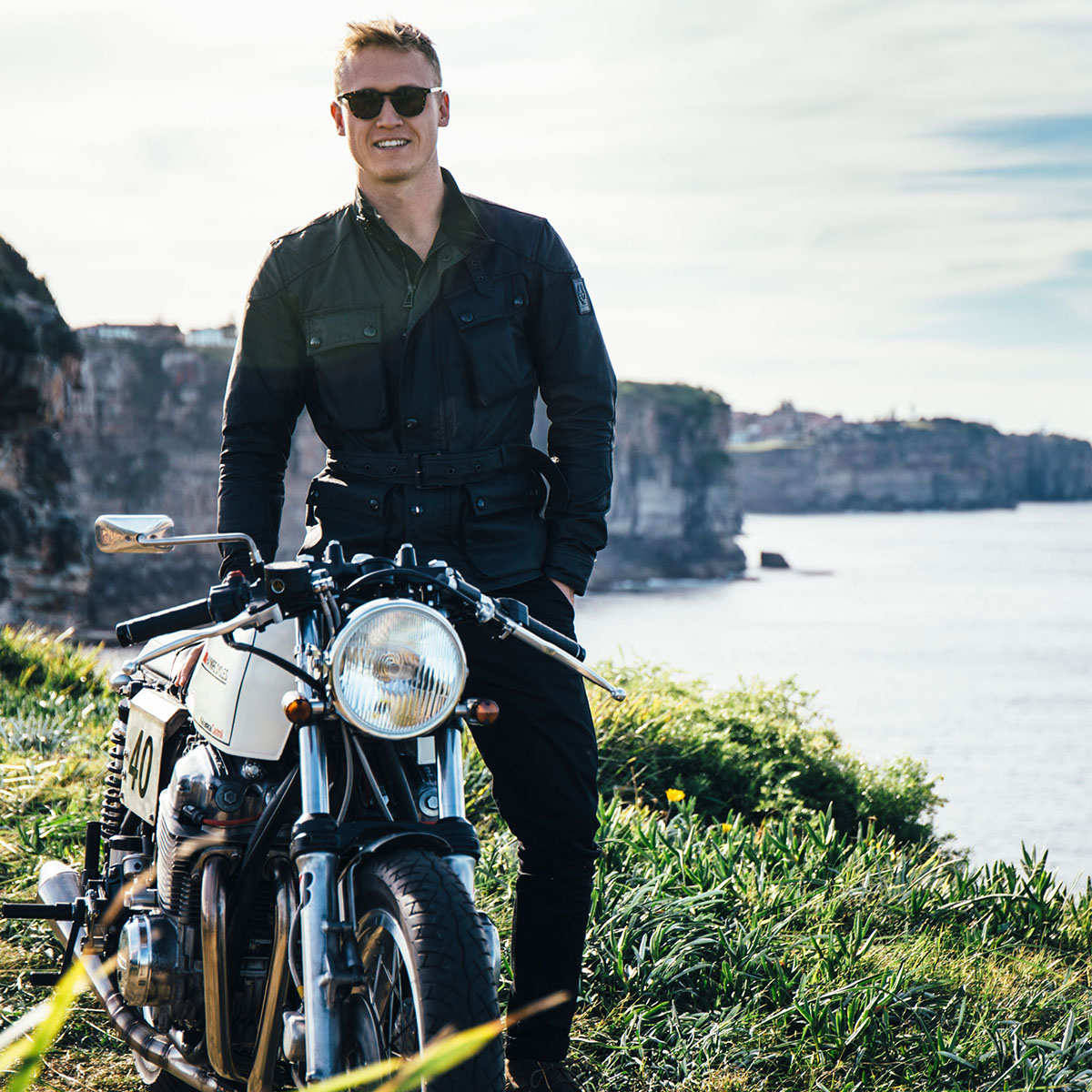 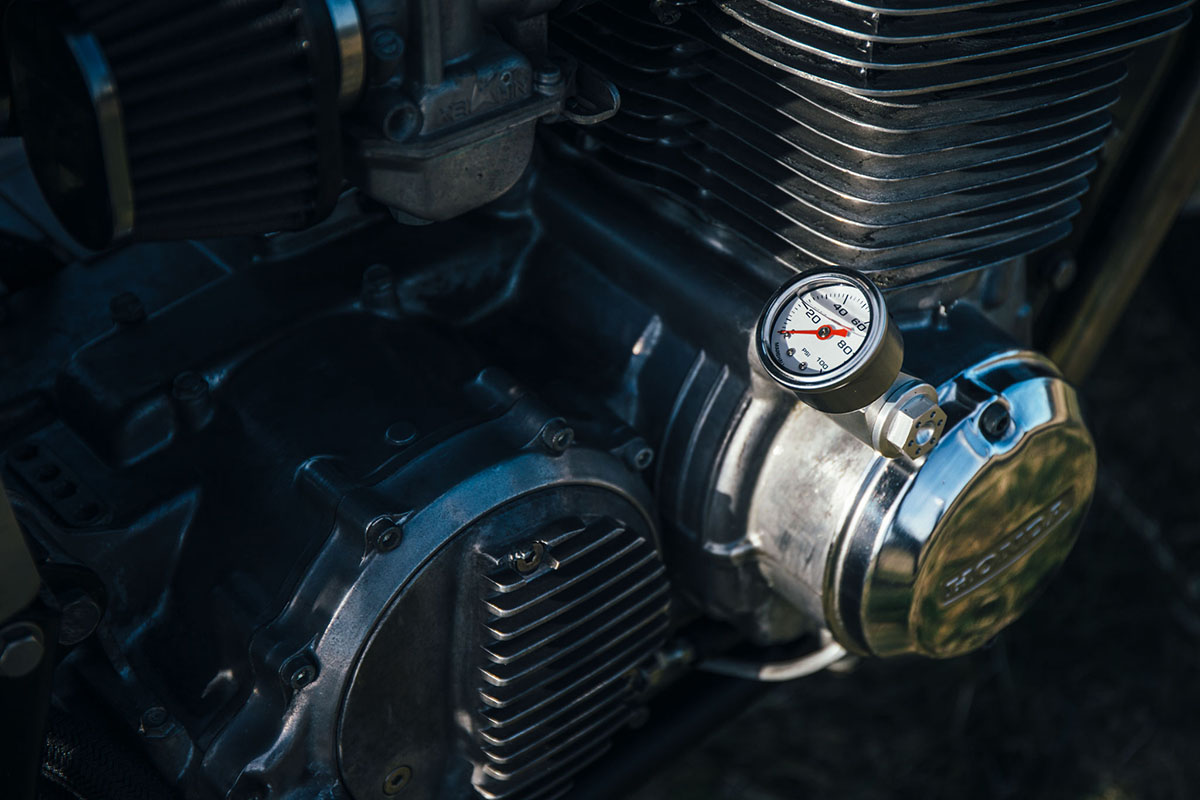 Keeping true to the Honda CB family, a CB550 would soon follow as Lars outgrew the CB400. This too would, for a time, feel almost too fast. This of course would not last – and so it was time for the hugely successful Honda CB750 to flex its muscles and become the bike of choice for Lars in both riding and wrenching. 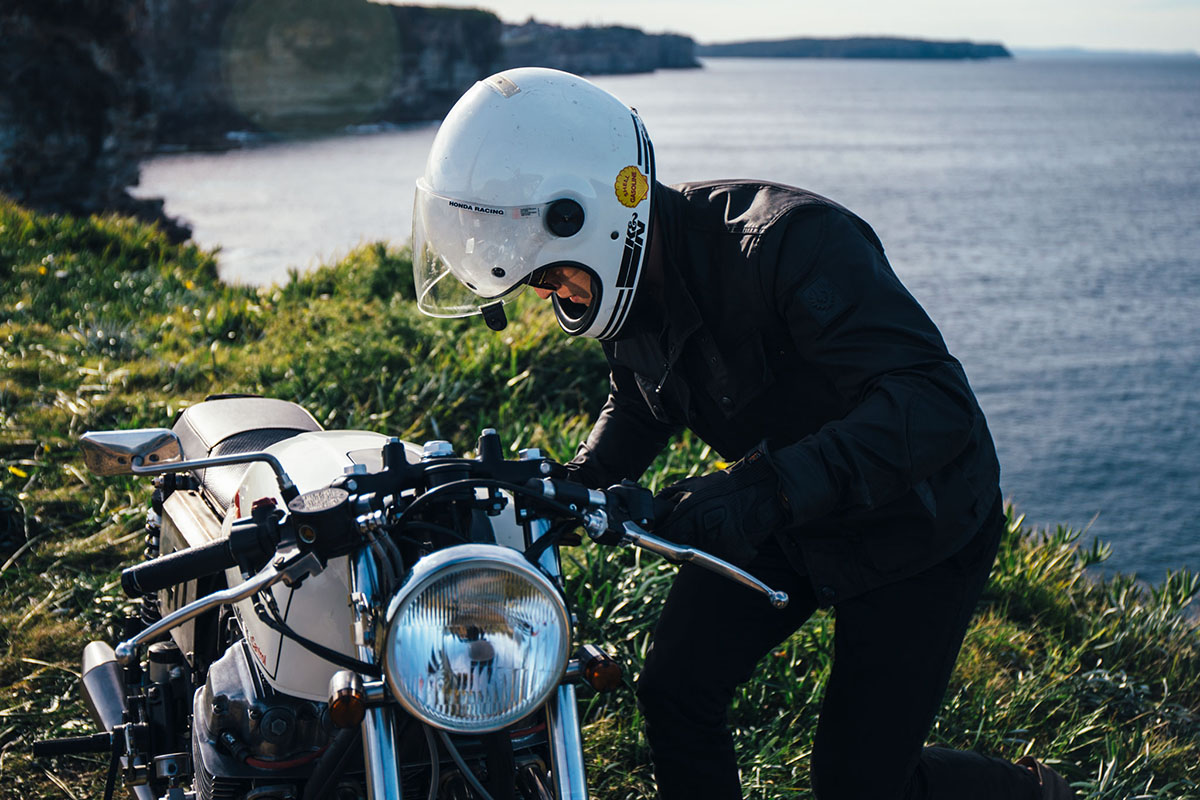 “I got my first CB750 from a bloke down the coast. It had been sitting in a garage unregistered for 25 years, but had a recent engine rebuild. It was exactly what I wanted – a clean, healthy engine with a rusty exterior. I wasn’t planning on keeping much of the stock shell anyway. I completed the build and it felt so bloody heavy compared to what I’d ridden before. After a couple of weeks I’d gotten used to it and was comfortably throwing the bike around (courtesy to a handful of performance upgrades) and now have been riding a CB750 daily for over 2 years. I don’t think that this is a bike that I’ll outgrow anytime soon – I love its weight and power.” 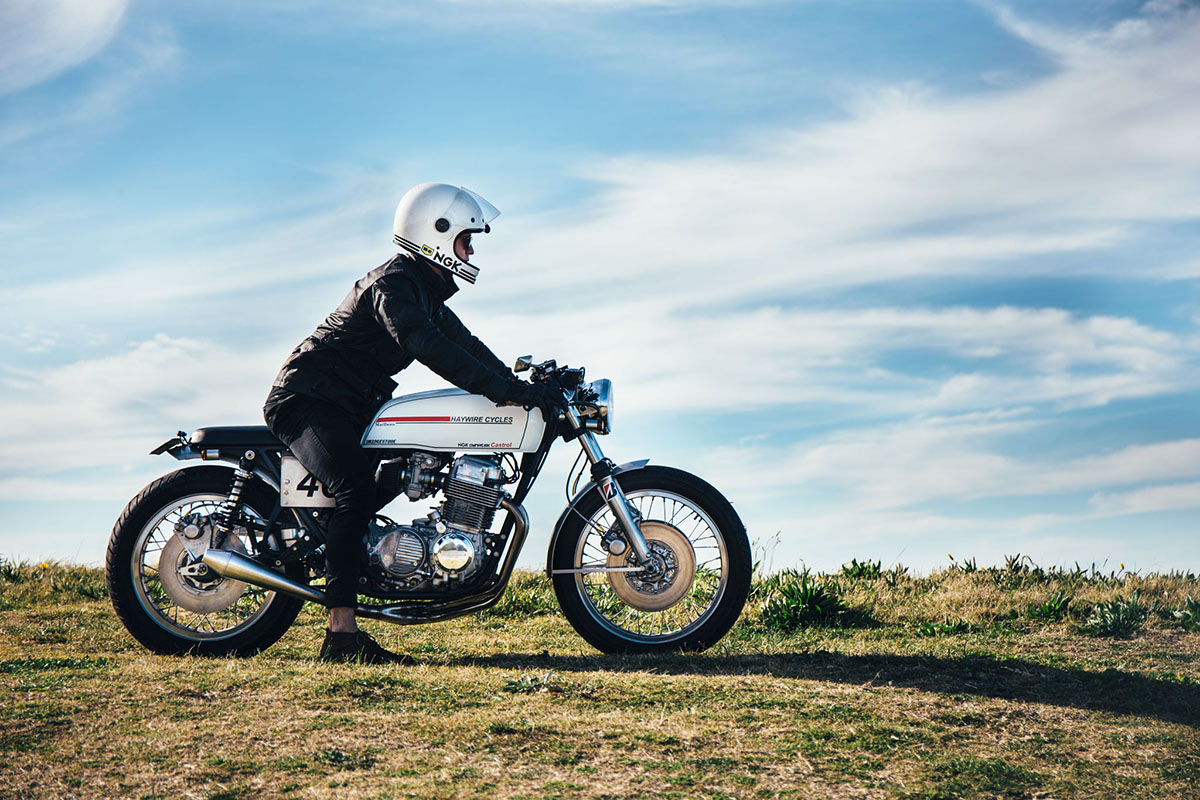 This is the part where Lars’s latest CB750 build comes in. This 1975 Honda CB750F was found on the Sydney Café Racers page, advertised as a complete bike with a recent engine rebuild. “The previous owner said it ran well before it was taken apart, but needless to say, I was sceptical. I picked the bike up on a trailer, the engine was in the frame, but the carbis and exhaust system were in boxes, along with the brakes and everything else. I spent the following day giving the engine a once-over so I could get it running and start troubleshooting. I did valve clearances, cam chain tension, ignition timing, changed the oil, rebuilt the carbis, fitted the exhaust and hooked it up to the battery. 6 hours later and she was alive! I ran it through the gears and checked the clutch and compression; the engine was in great condition! This meant it was time to pull the engine back out and get to work on the rest of the bike.” 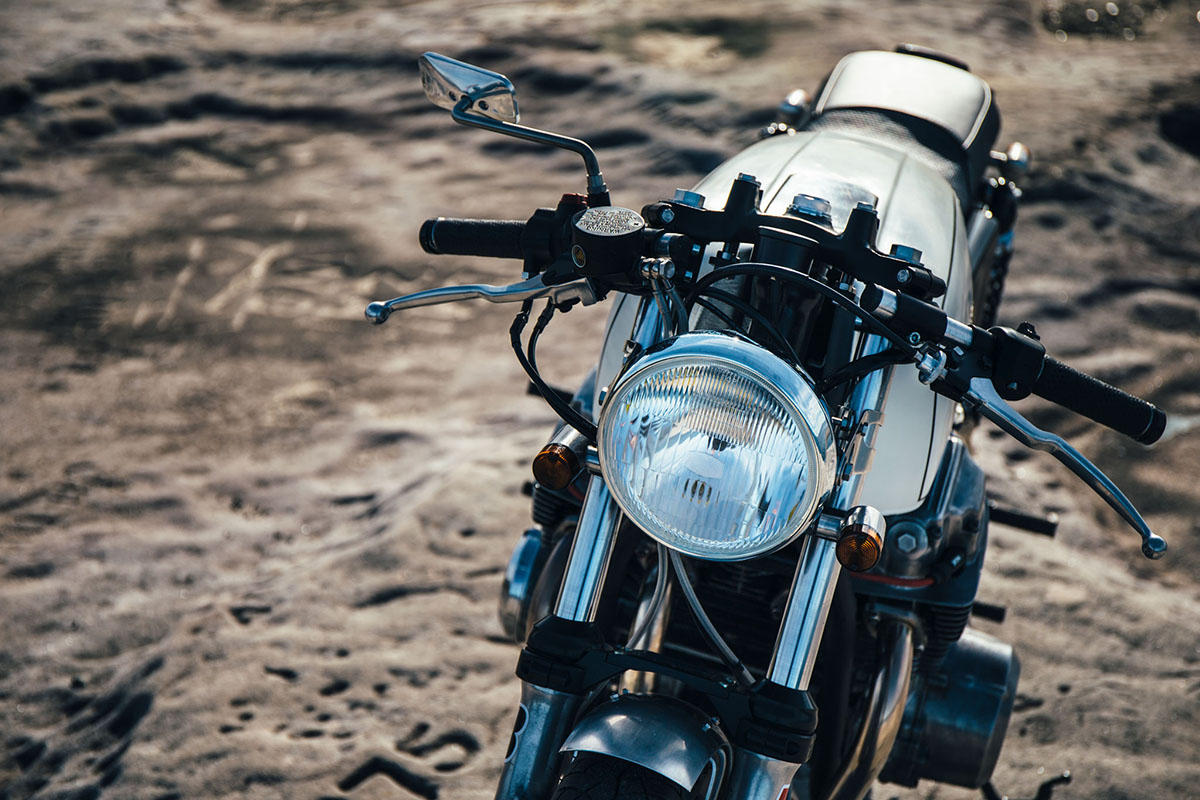 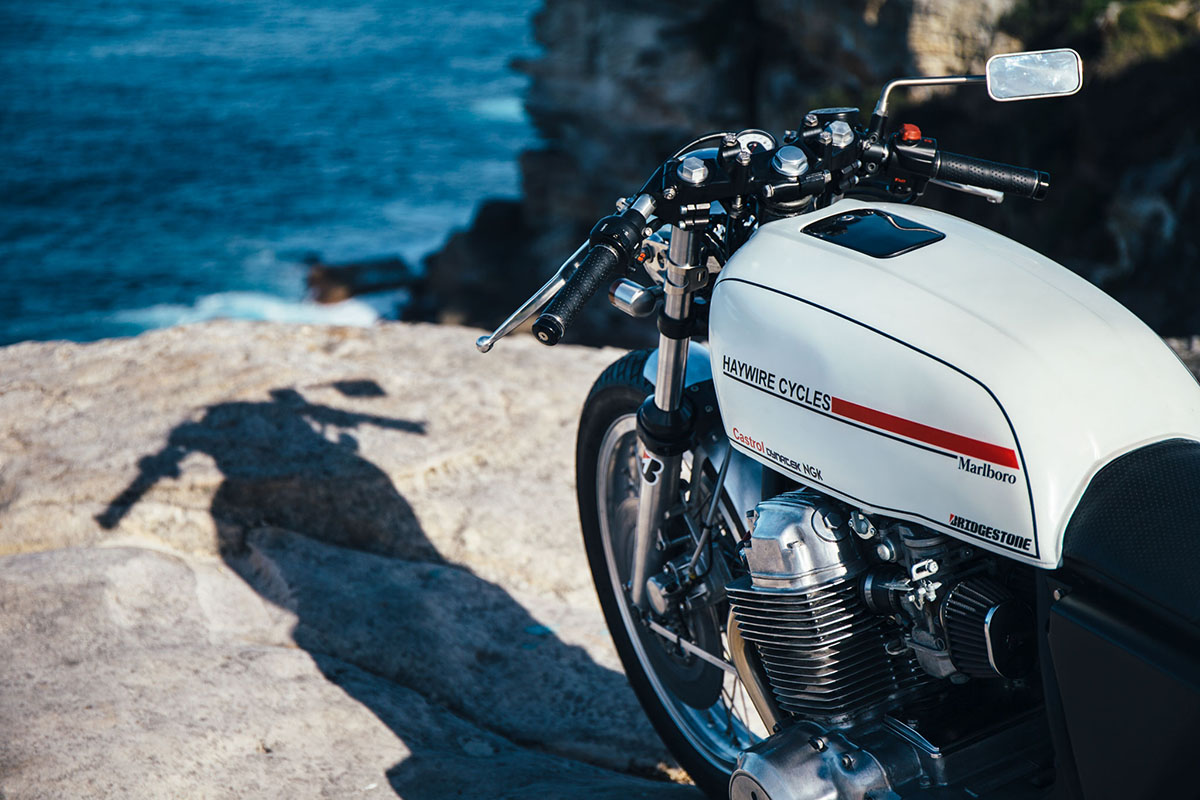 Despite not having a complete vision of just exactly what this build would be in the engine, some parts were already figured out in Lars’s head, and so that’s where he attacked first. The wheels would be removed and the spokes hacked out with a grinder. The wheel bearings would be replaced as new stainless spokes would be added into the shouldered aluminium rims. “Upon removing the wheels I discovered the swingarm wasn’t performing so well, and the front fork tubes were bent. I made a few modifications to improve grease flow to the swingarm and replaced the fork tubes, adding a bit of preload. I extended the rear shocks and the suspension was sorted.” 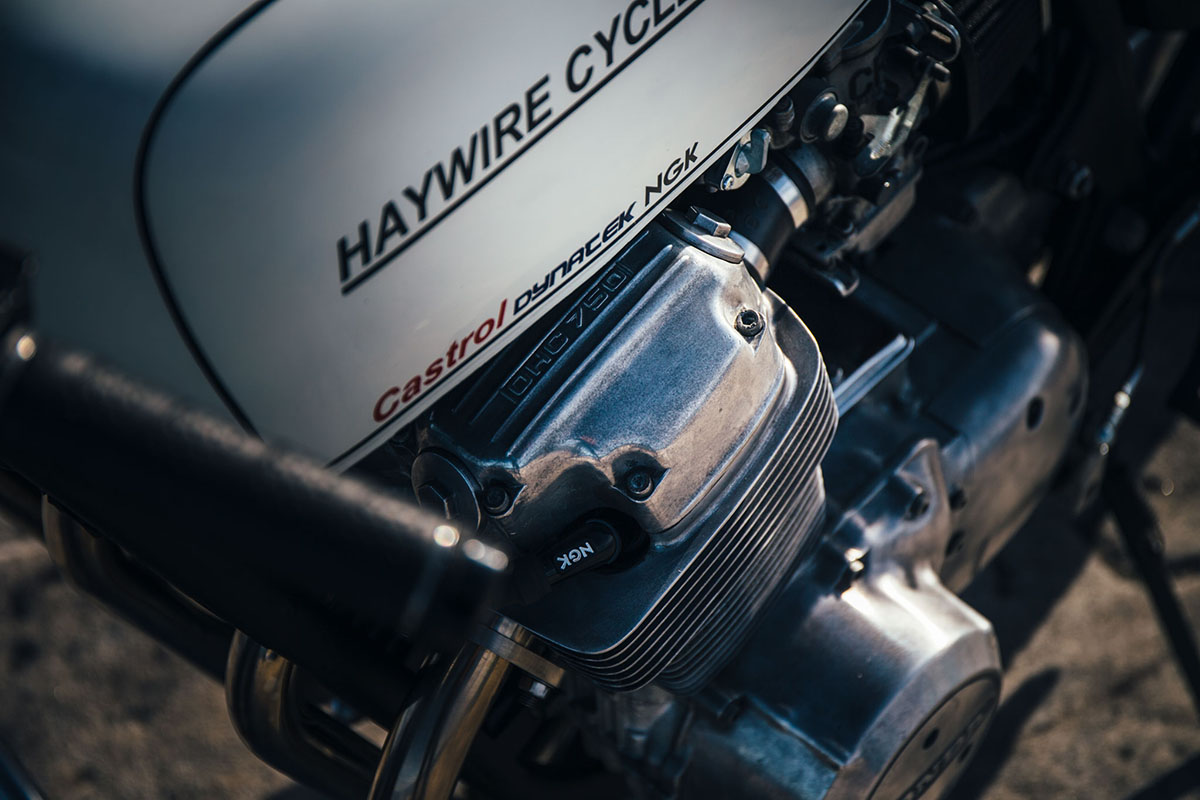 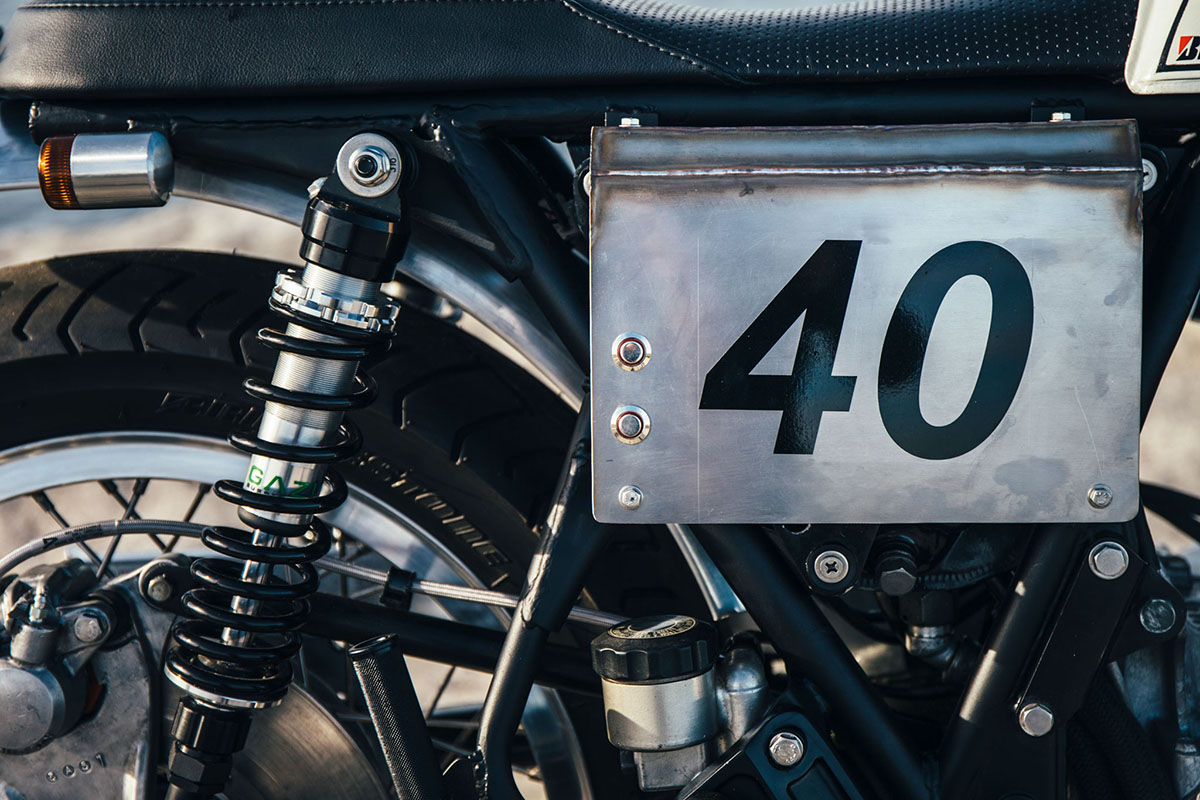 “Next step was cutting the subframe and making the necessary welds to mount the seat, pillion pegs, remote idle screw and side covers I had welded up with stainless steel (I was sick of burning my right leg on the oil tank).

I bought a set of stainless headers, but to increase the scavenging of a 4 into 1 system I welded up a new merge collector with a smaller outlet diameter (1.75″ instead of 2.5″). I then decided where I wanted the muffler to be, measured up a few pie cuts to get it in position and welded it all together to a 1 1/2 straight through reverse megaphone.

I built a seat, mounted the blank front and rear fenders, made a tail light / license plate holder, shortened the clutch and throttle cables, fitted some rear sets, and wrapped some leather around the new clip-ons. I now had a functional bike.

Everything was now decided except the paint scheme.” 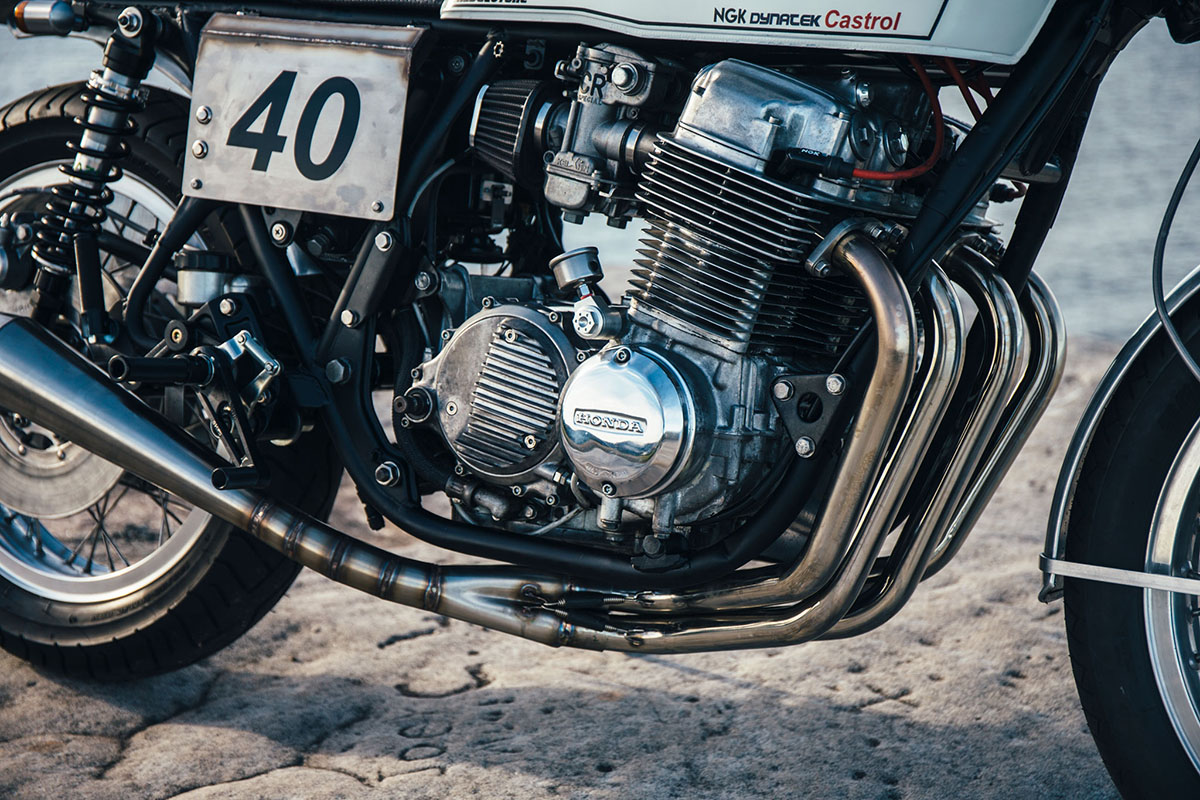 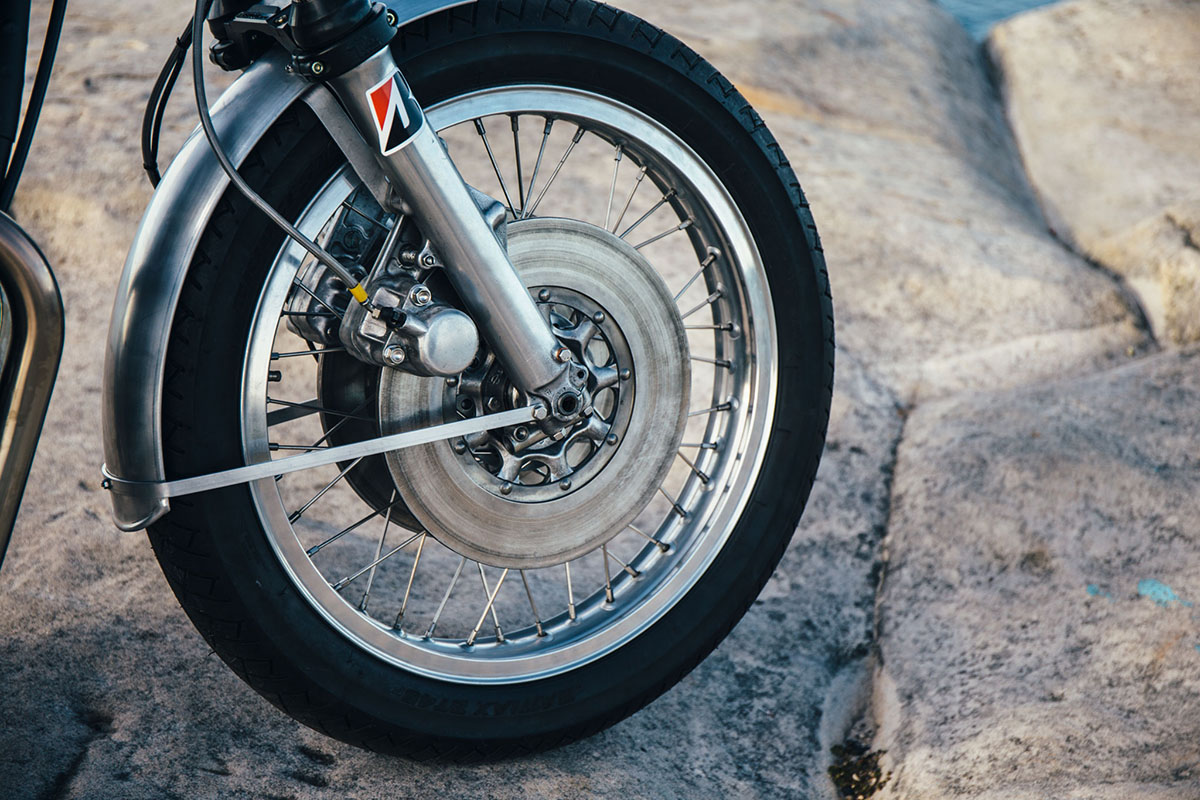 “I was at the Barry Sheene Festival of Speed when I decided on the paint scheme for the entire bike, it was going to be a vintage race bike. I drew up a few designs and decided which parts were going to be raw metal or painted black, then got to business, I like to finish the build before i start on painting and polishing. I took the entire bike apart and removed the engine, I painted the frame and all its components in a day.

It all came together at once I assembled the bike and fitted some new Keihin CR29 carburettors with K&N filters and fired her up. It was running rich in the low end, perfect at 1/4 throttle but lean upwards from about 3/8 throttle.

A fiddle with the idle mixture screw, needle clip down two positions, main jet one size up. Half an hour later it was running well through the entire rev range, got to love these new carburettors and how easy they are to adjust.” 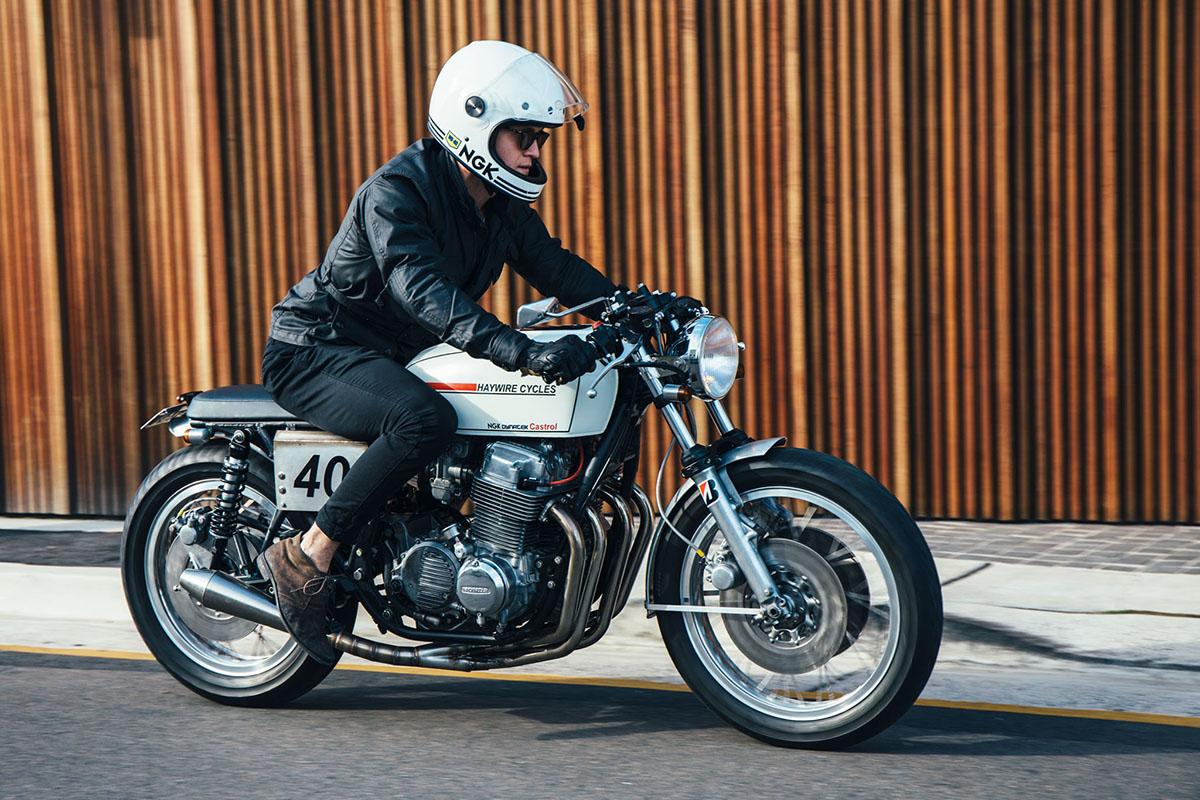 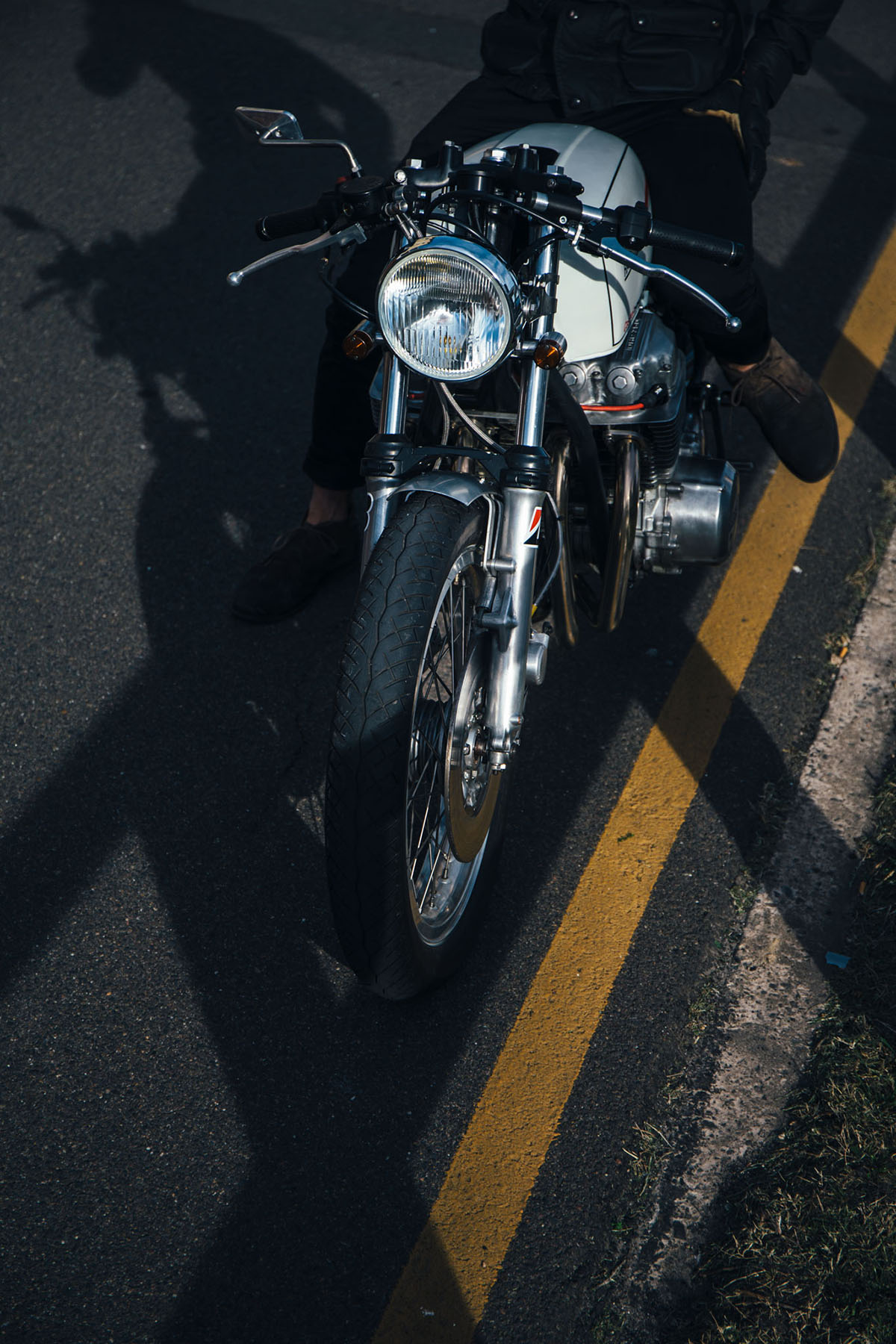 “It is an absolute pleasure to ride with the suspension height, seat shape and handlebar positions tailored for me. The engine sounds amazing and it takes off like a rocket. Cosmetically I designed the bike to look (in my opinion) classy and understated rather than flashy and asking for attention, no chrome, no bright colours, no cheap parts and nothing that will rust.

I don’t like to remove functional parts of a bike to make it look less ‘clunky’ or drill holes in things for ‘weight reduction’. I’ve seen bikes with no mirrors, speedo, side covers, fenders, chain guard, poor tyres and clip ons without rear sets.

The top priority is getting the bike to function well, cosmetics always come second. That’s often where the challenge lies, designing a beautiful yet functional machine.” 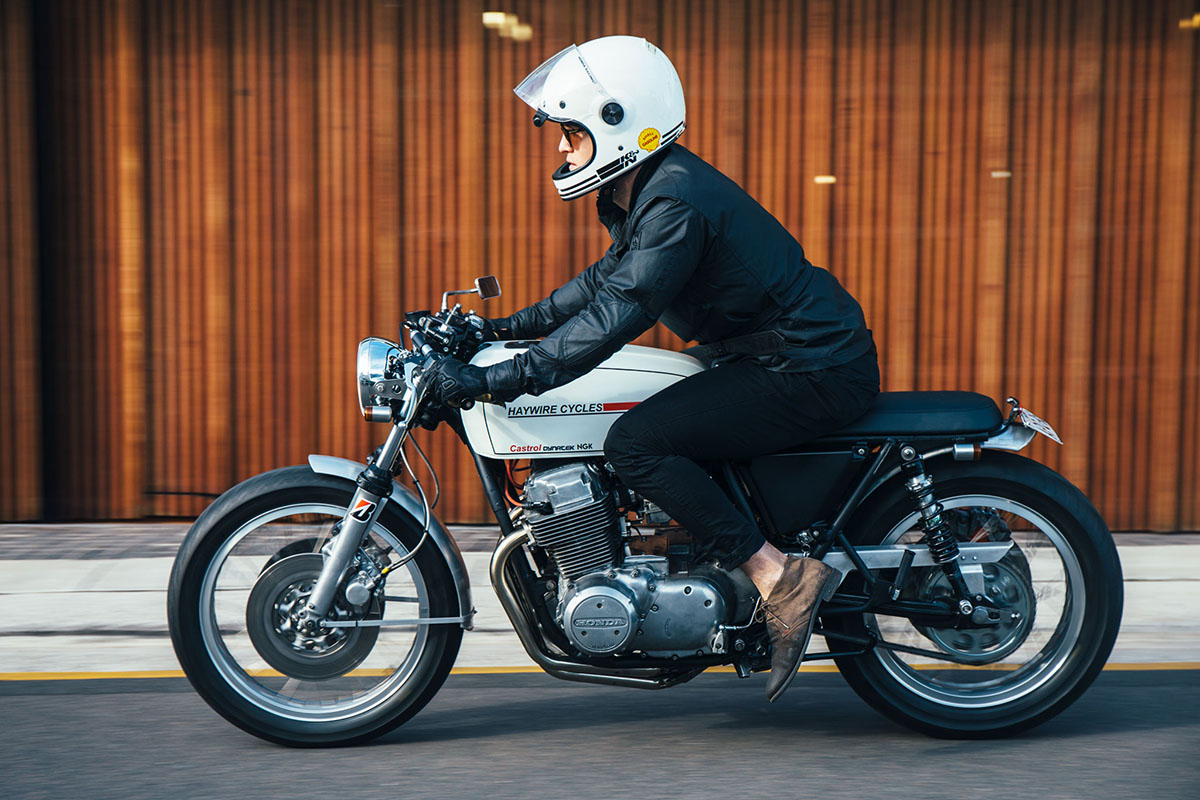 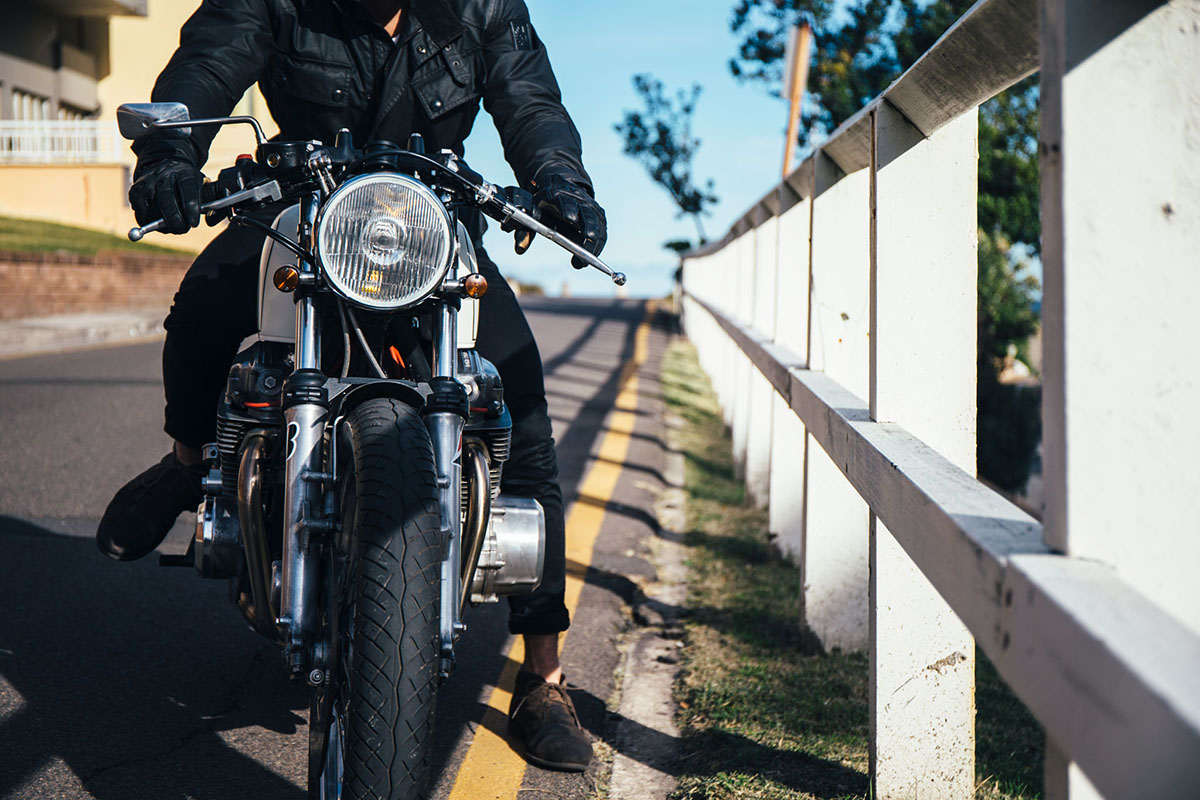 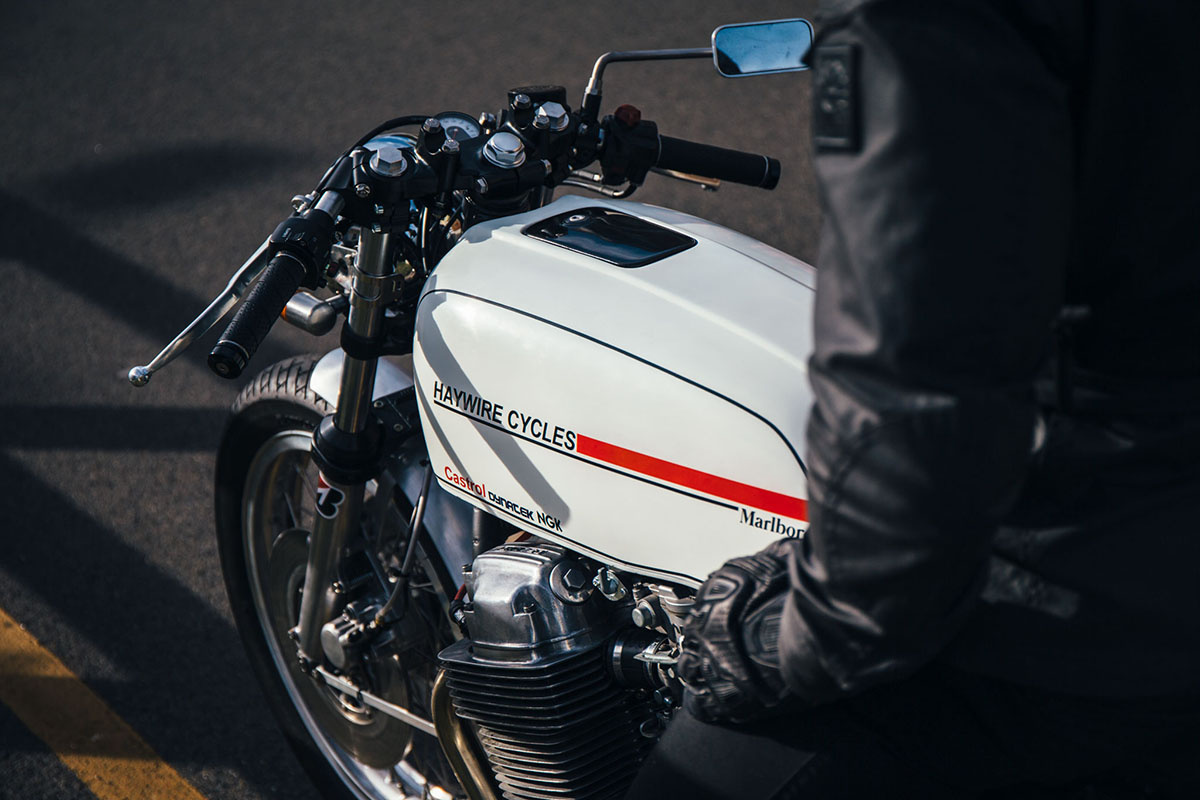