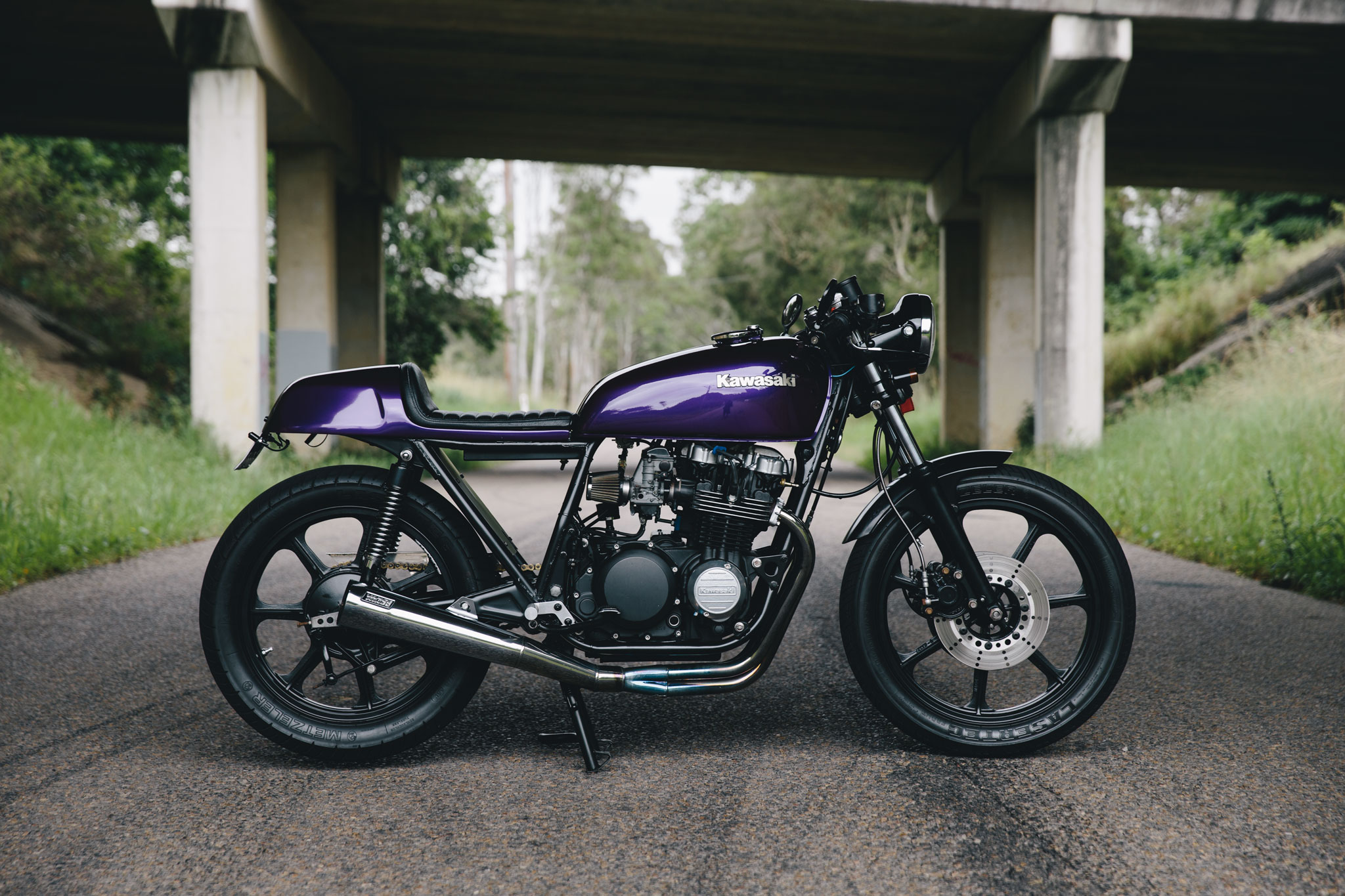 Growing up on an acre property with nothing but flat dirt as a kid was life for Cam, and when his old man brought home an early ‘90’s Kawasaki KX60 one Christmas – bikes would be firmly cemented into his life. Cam’s veins now ran Kawasaki green. 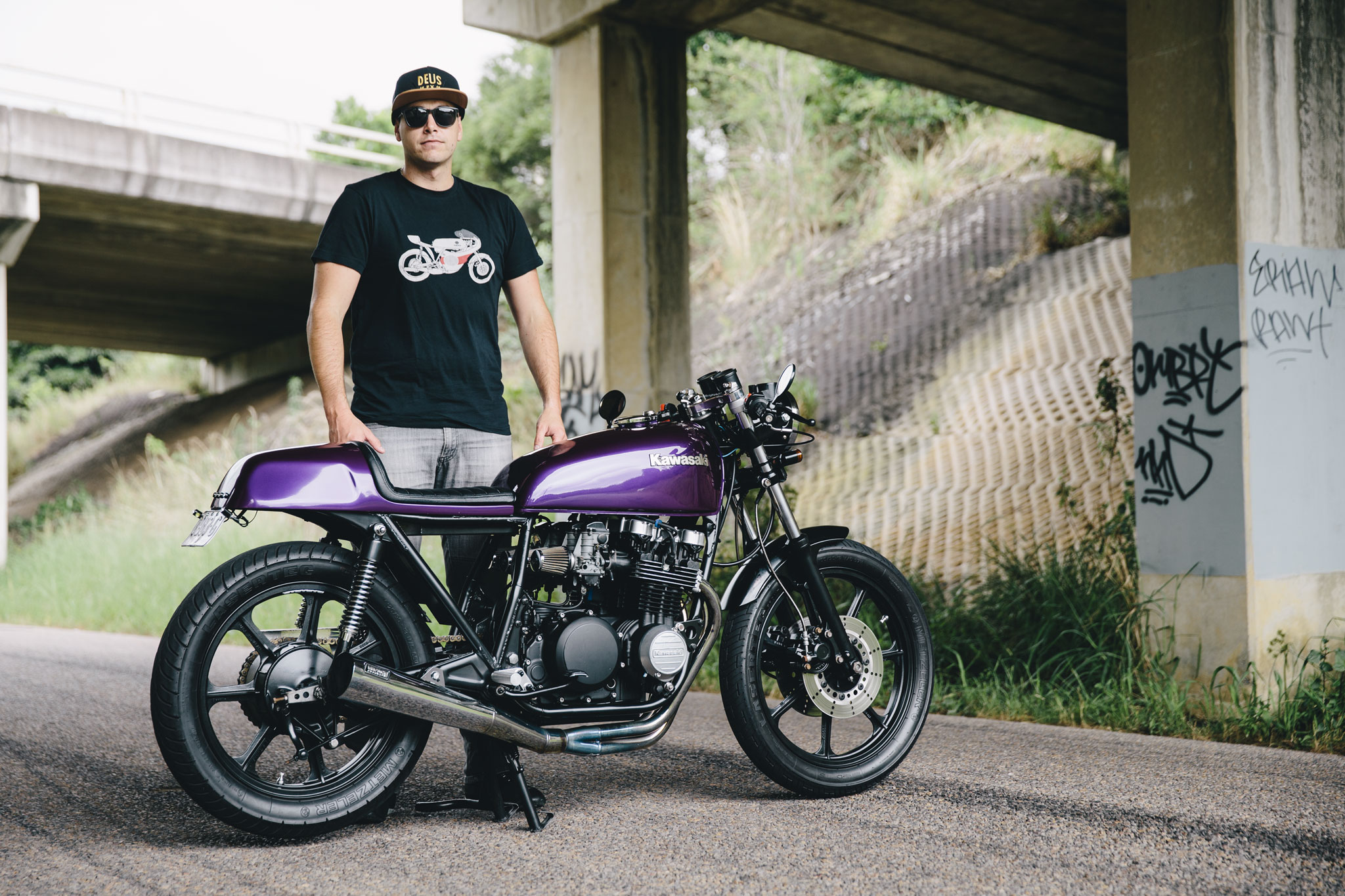 Despite this early introduction to bikes, a change in direction happened as Cam spent more time on other passions like Soccer, Powerboats, and Ski racing. He’d lost touch with 2-wheels, but this wasn’t to last. “At around 16 I got back on the horse, racing around on 2-stroke Yamaha IT175’s out at Mudgee. Something fast, and the smell of burning fuel always got my attention. About 3 years ago, my mate Chris drew me into the old school motorcycle scene. The sleek, retro “less is more” approach got me hooked. Countless Youtube videos, magazines, and after attending Throttle Roll, a trip to “Old Gold” was in order. Chris ended up with a Honda CB250rs, while I of course went for a Kawasaki KZ250 so we could both get started out.” 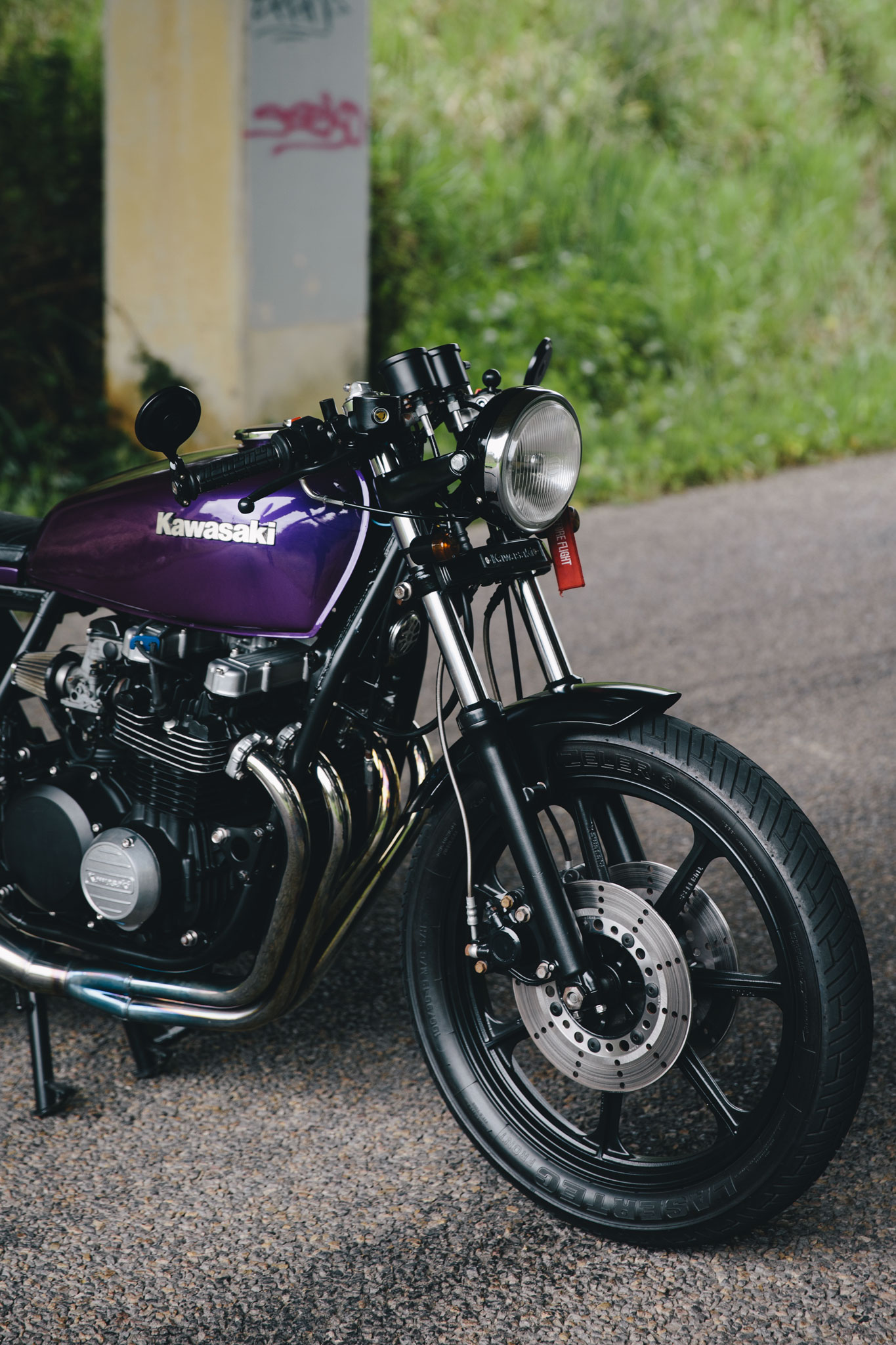 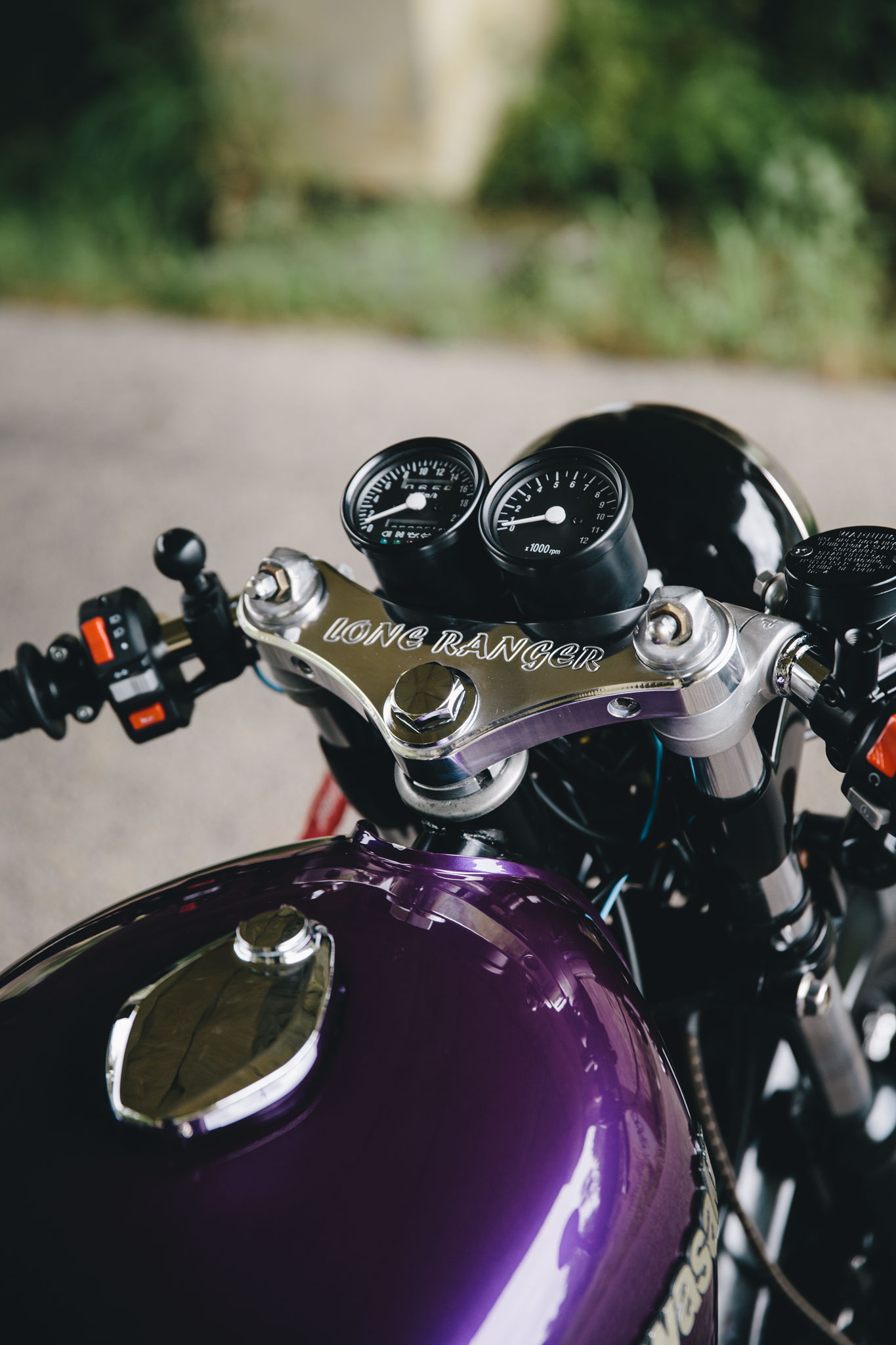 Time in the shed for Cam is time well spent. It’s an outlet, and something he can tell the kids about later in life. Pulling back and switching off while you work on your machine is a unique and highly effective form of meditation. “The feeling of working on your own motorcycle is so satisfying – I really haven’t looked back ever since!” It would now be time for an upgrade from the 250 he and his mate had grabbed. The search for something different, something new, was now on. 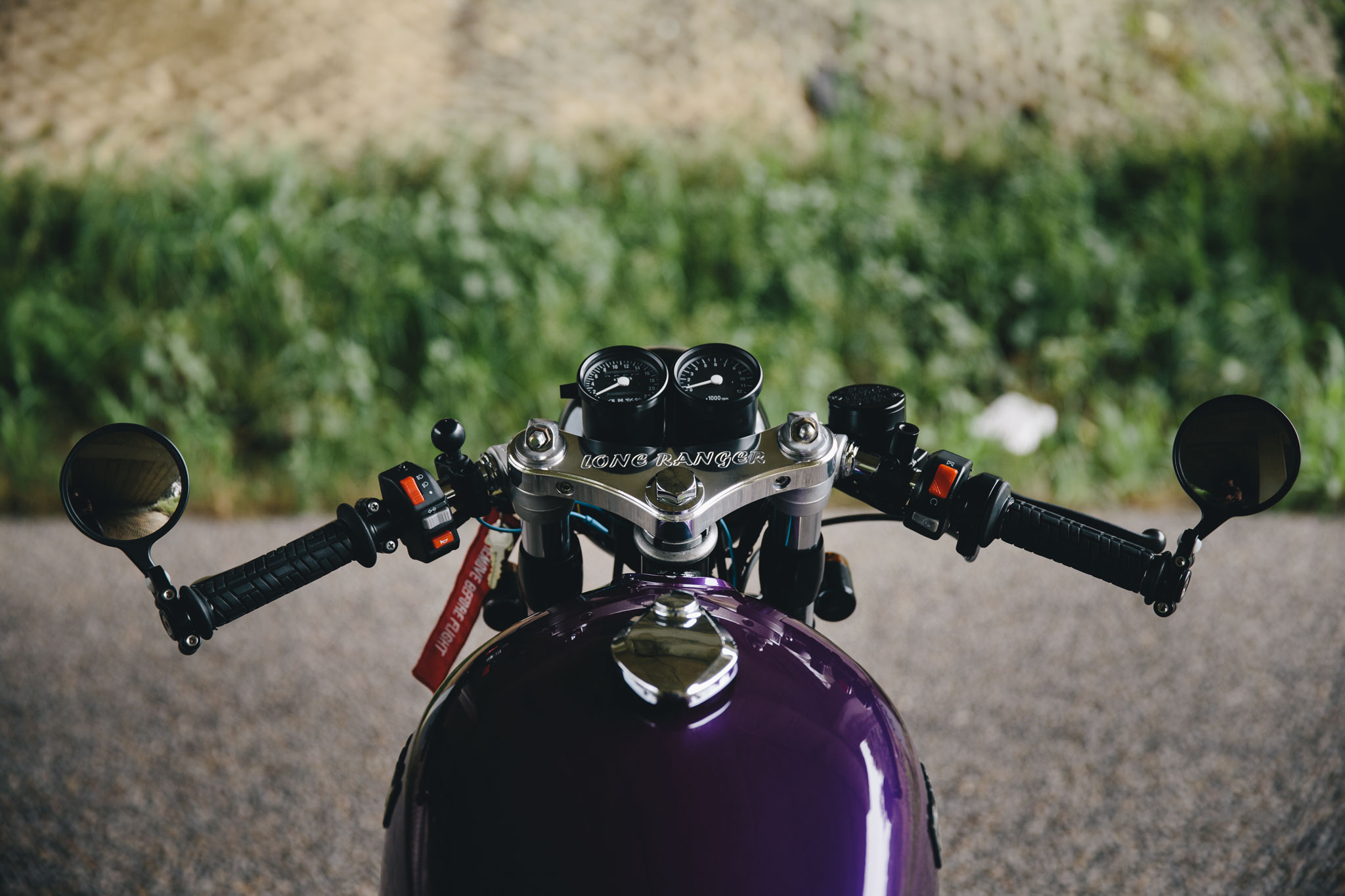 Settling on the ‘80’s screamer, the KZ650, Cam soon realised there were bugger all of these machines actually in Australia. “eBay, Gumtree, Trading Post – nothing! I dug a little deeper on a Kawasaki forum and found a complete bike in NSW. I sent out a message on the Thursday, and early on the Friday I had picked up my Grandfather’s bluebox trailer and was on my way to pick up the bike.” 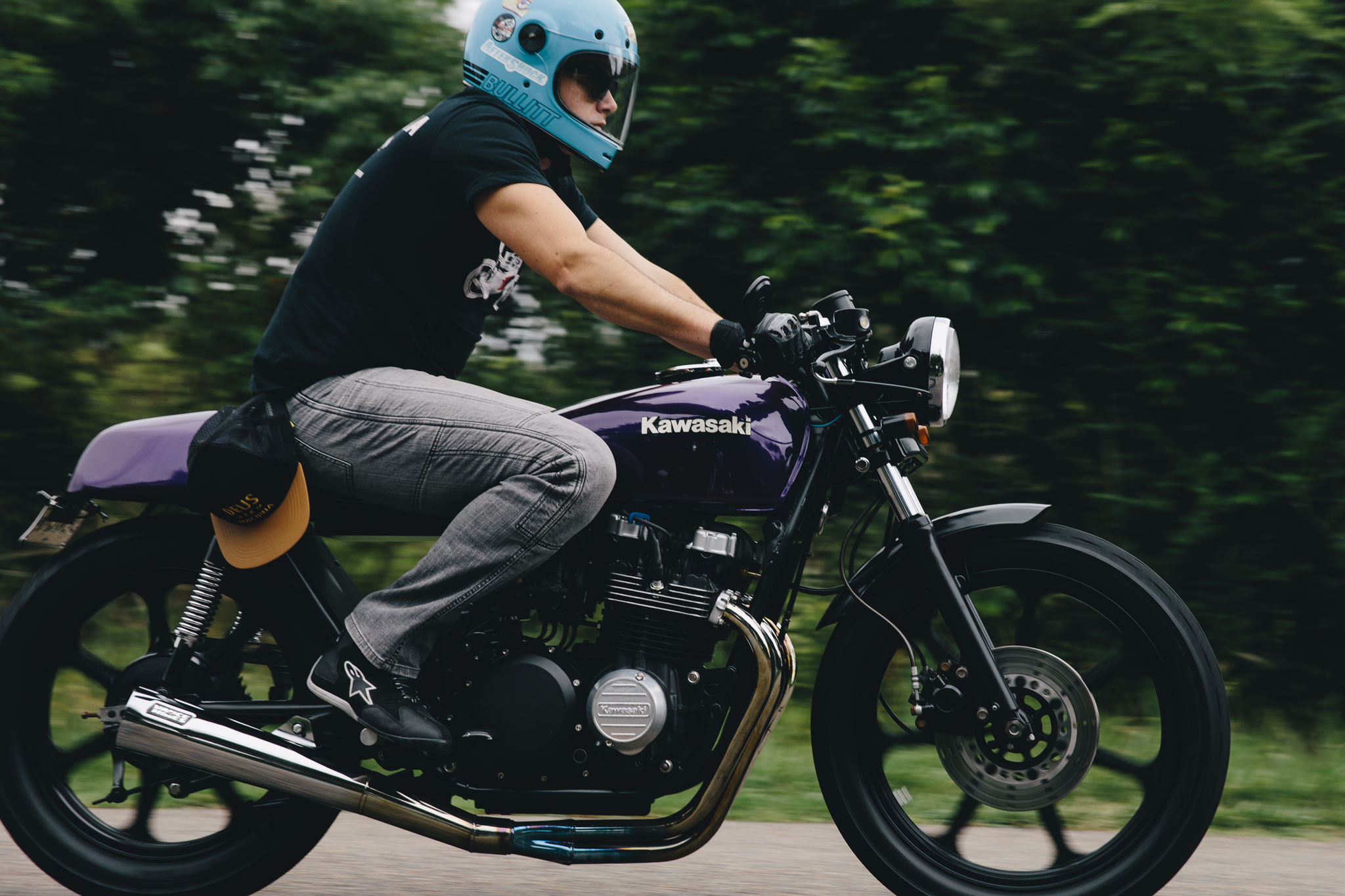 The bloke Cam had purchased this 1981 Kawasaki KZ650 from had originally bought it brand new in England back in 1981. After moving to Australia, the bike sat in a shed for nearly 20 years. “He was also a Kawasaki man at heart, so it all felt pretty right. To be honest, this was the first time I’d ever touched a motorcycle mechanically, I really had no idea what I was doing! It was a challenge, and a really big learning curve. A lot of photos, and bagging and tagging of parts kept me honest.” 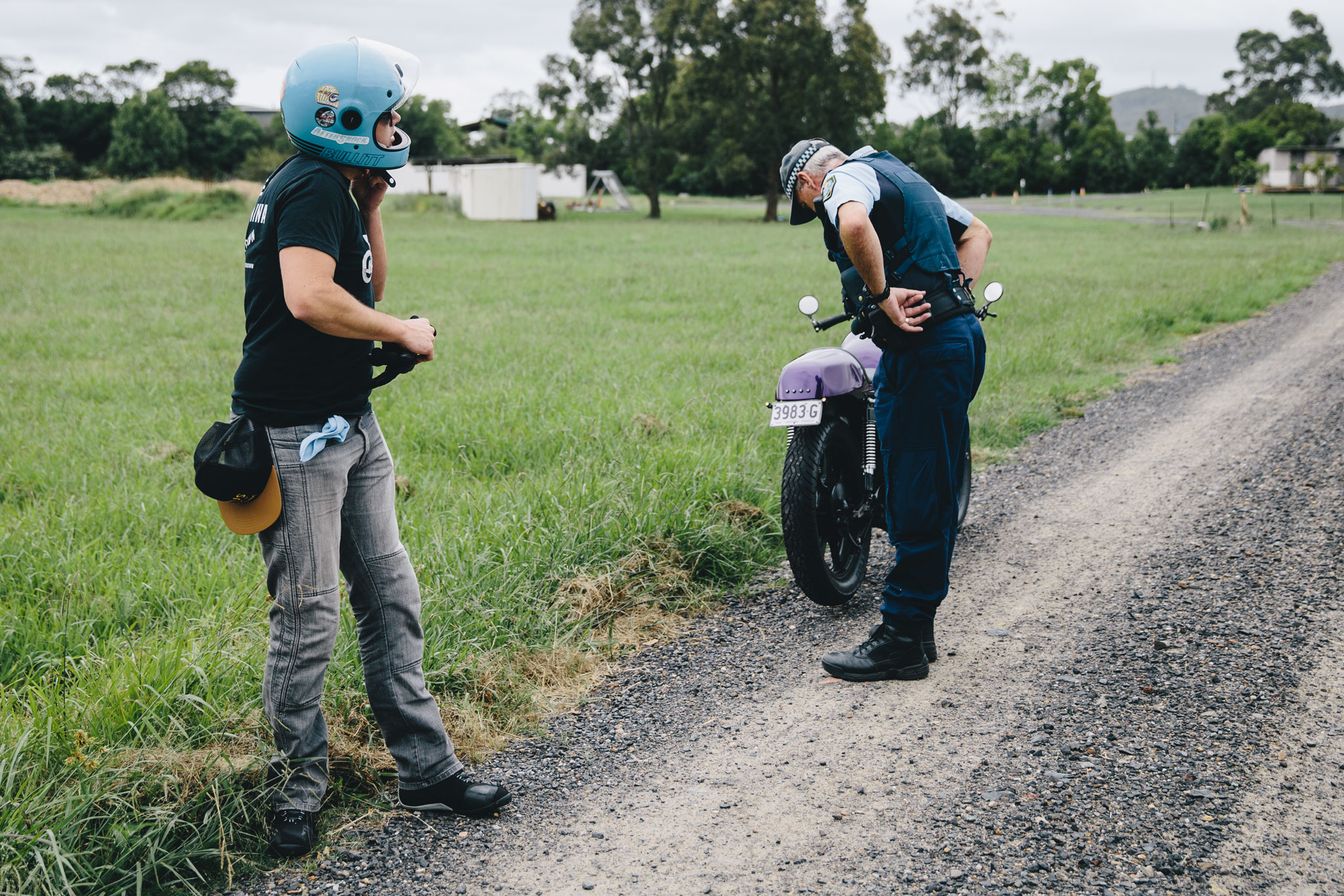 Cam soon got to work stripping this neglected old Kwaka down, his vision for this machine was to keep it clean and simple. Staying true to the style that had originally peaked his interest in this aspect of motorcycling. “I wanted a bike I could ride overnight with the lads, and turn up the next day to a show and shine – a reflection of myself.” 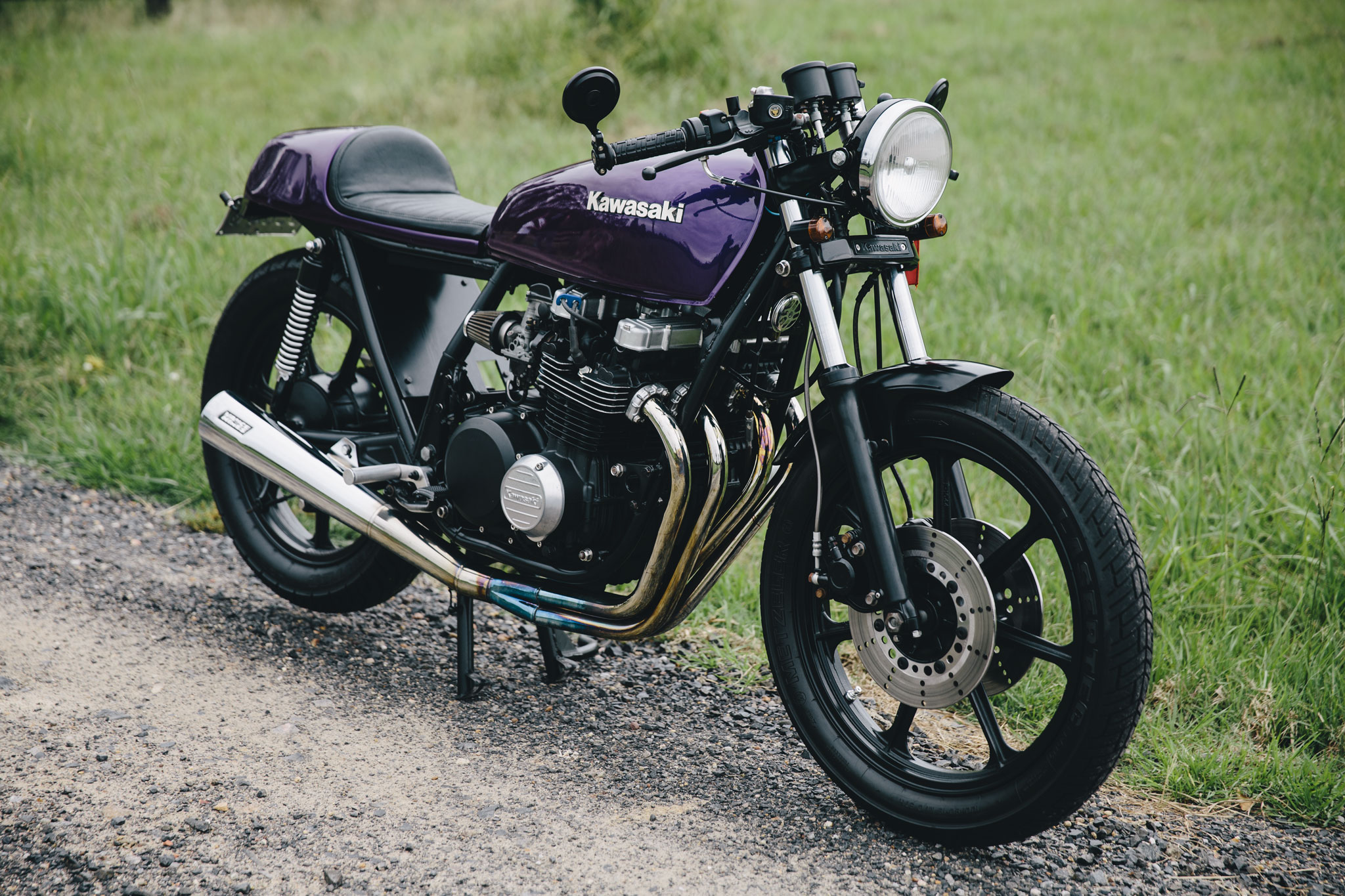 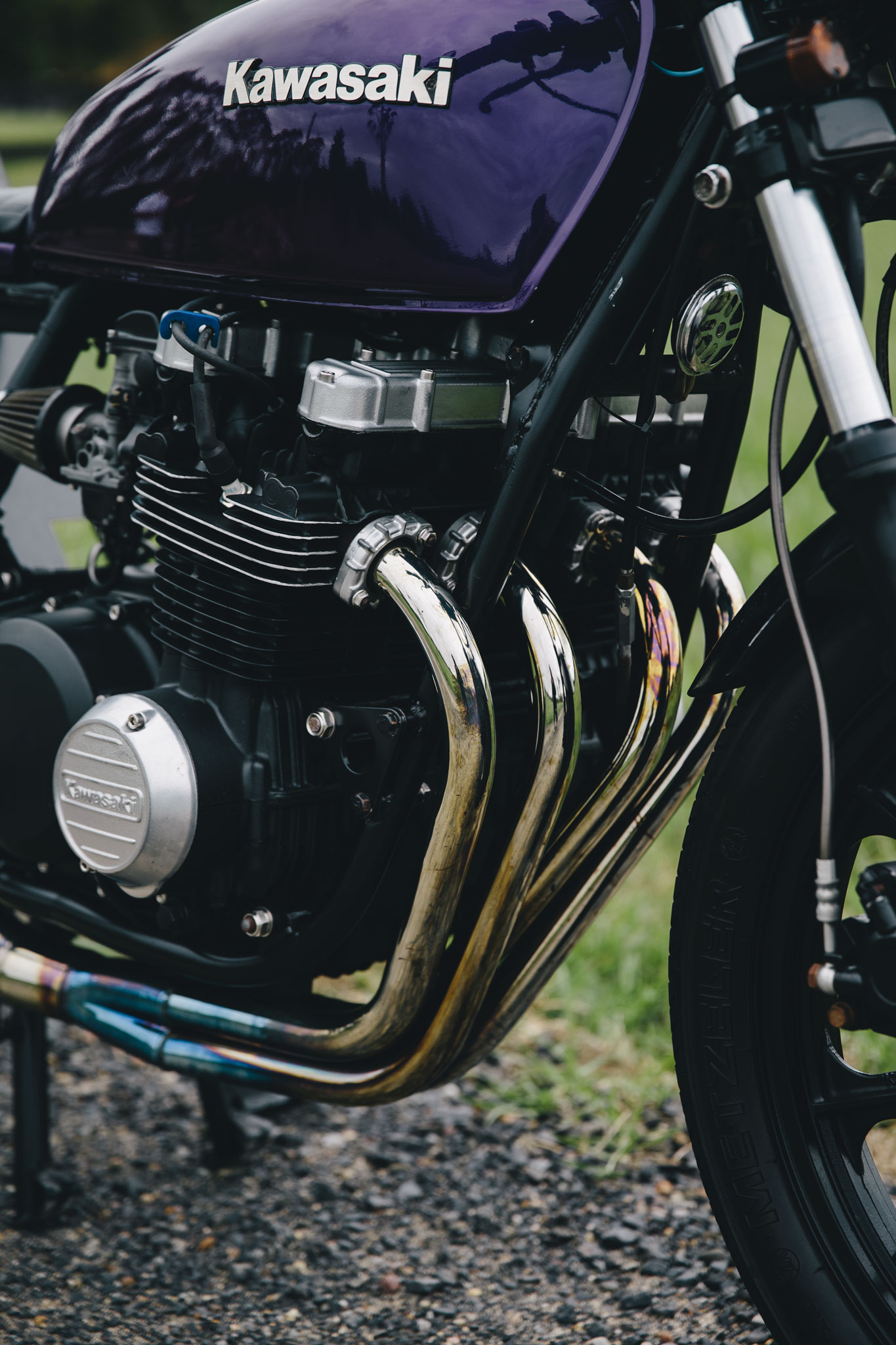 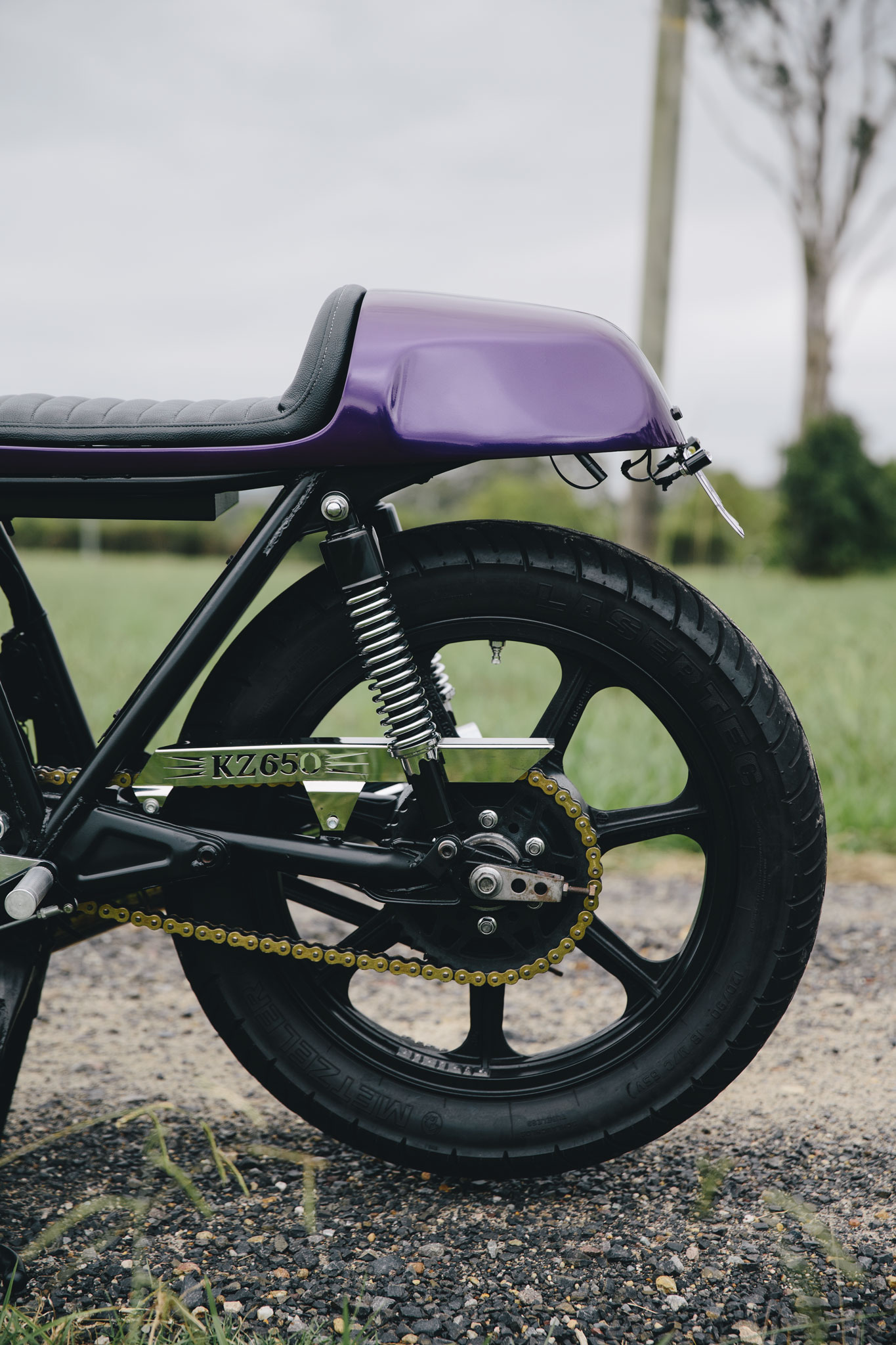 “I completed all the detabbing, welding and grinding to get a base ready for the build. I then started to play around with fitting up parts that I liked, getting a more visual idea of what it would look like in the flesh. I folded up a new electrics tray, splashguard and new bearings all round. Next up I grabbed a set of Vance & Hines 4-1 exhaust, HID headlight and set up the electronic ignition. With a chance meeting at Rene9ade Workshop, I found a seat that matched the flow of my tank perfectly. Kyle was up for the challenge and got to work mounting it onto the bike for me. Darren at DNA knocked me up a one-off engraved triple clam and rear sets for me. As they say, and 6000km later, the rest is history!” 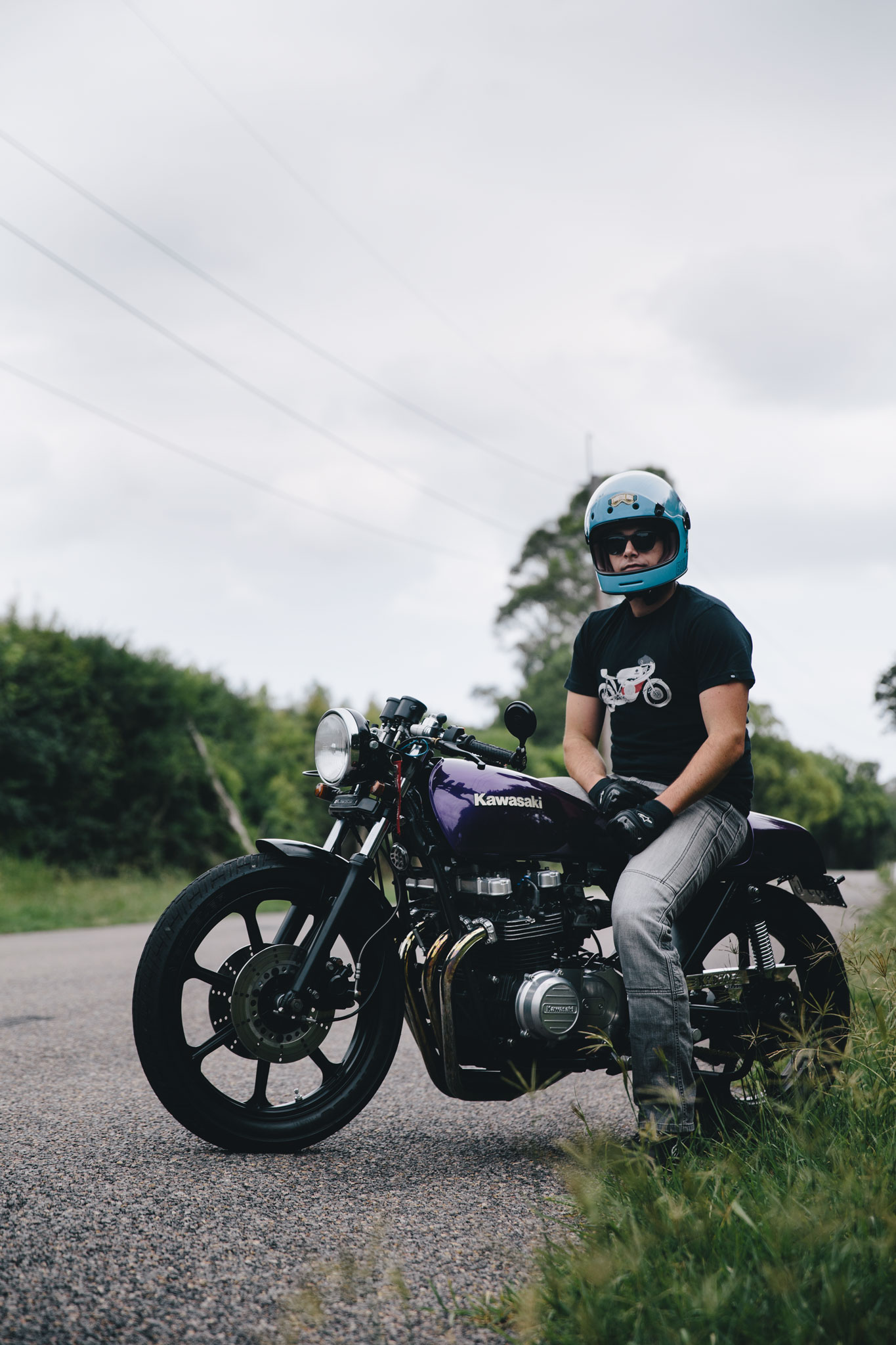 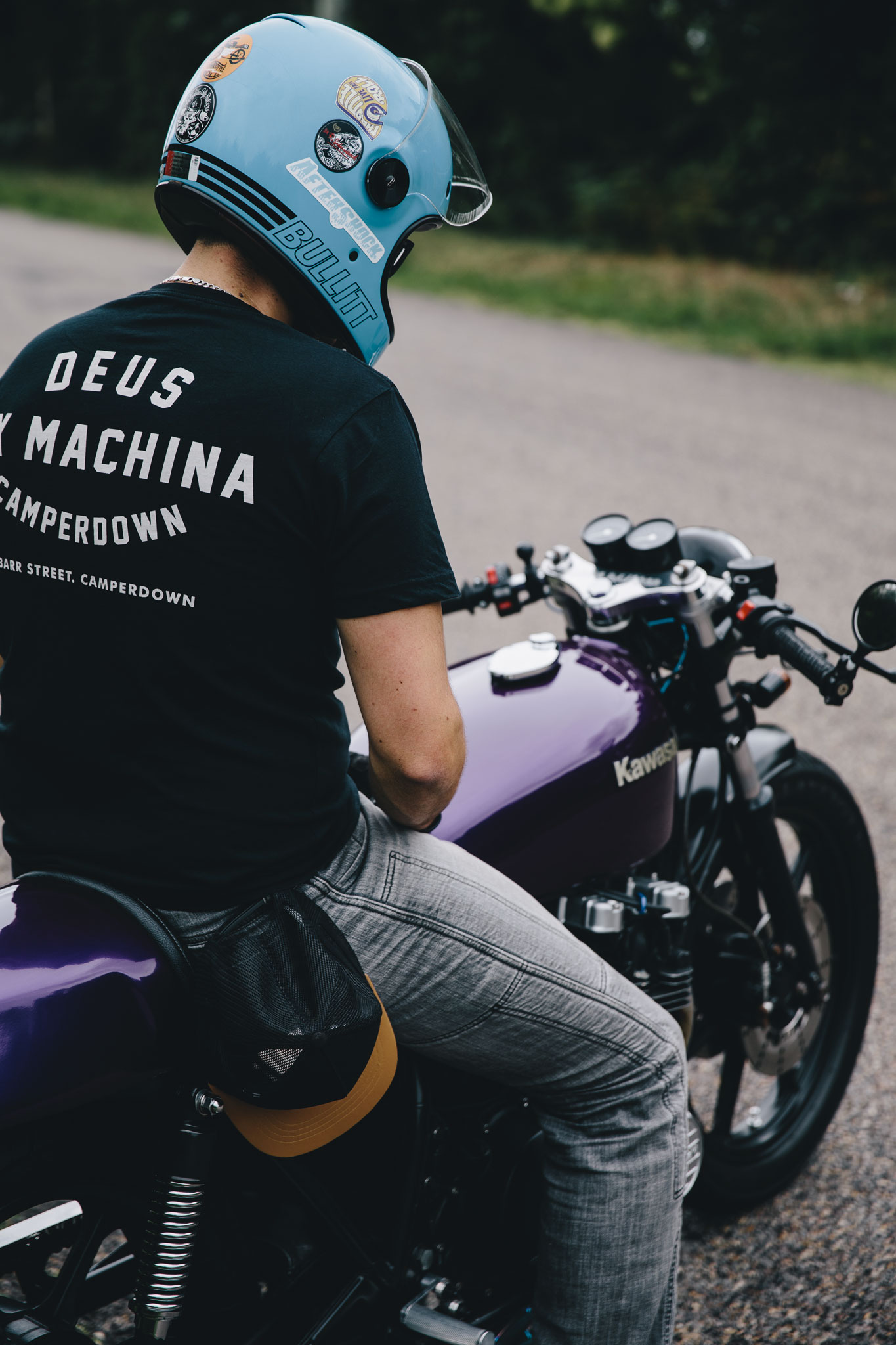 Despite Kwaka green running through Cam’s veins, he decided to take a risk and do something he felt was left field and so painted with a purple scheme. “It was a learning process, and certainly a challenge, but the end result is a machine I love that has plenty of character, and many hours behind it.” 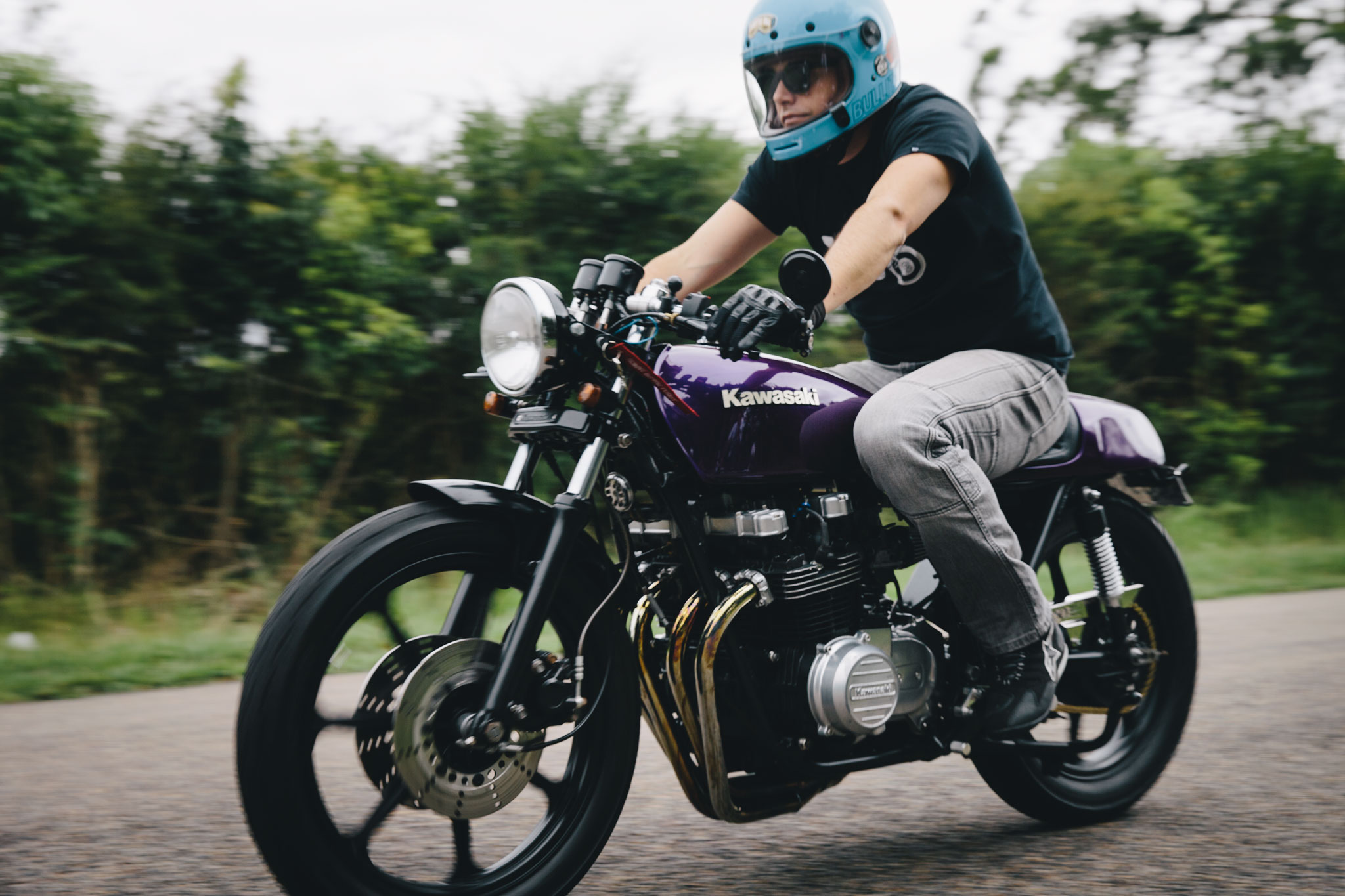