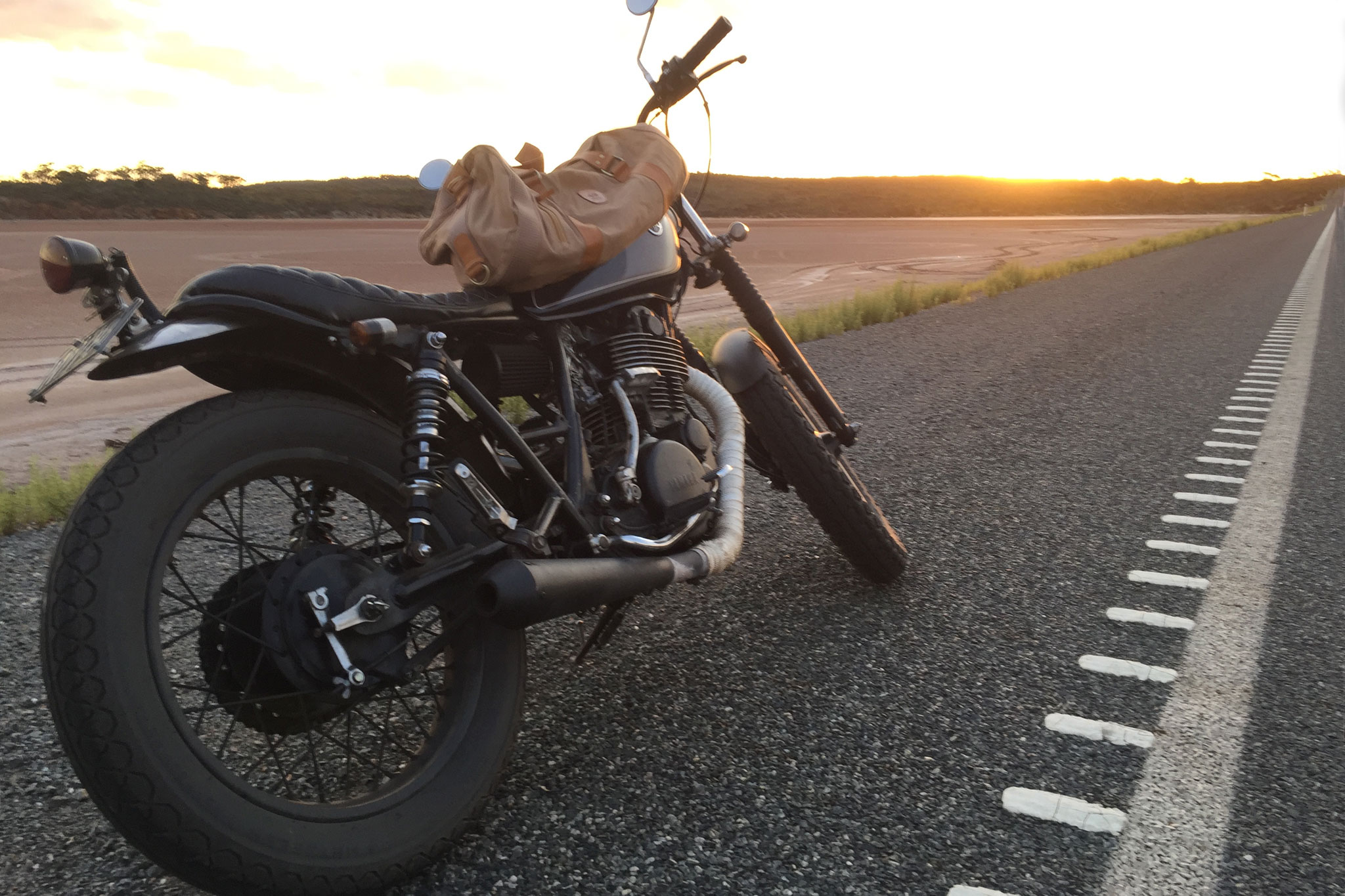 5 weeks on, and 5 weeks off. That’s 5 weeks working on boats out at sea, and 5 weeks to do whatever you wanted once home. This was work and play for Rory, and for those 5 weeks play he decided to make good use of the time he had. When you mention riding from Sydney to Perth, you’ll no doubt instantly think of more Adventure or Touring styled machines, with panniers and plenty of luxuries. Not for Rory – his trusty 1988 Yamaha SR400 would be his adventure machine. Some say his bones are still vibrating to this day. 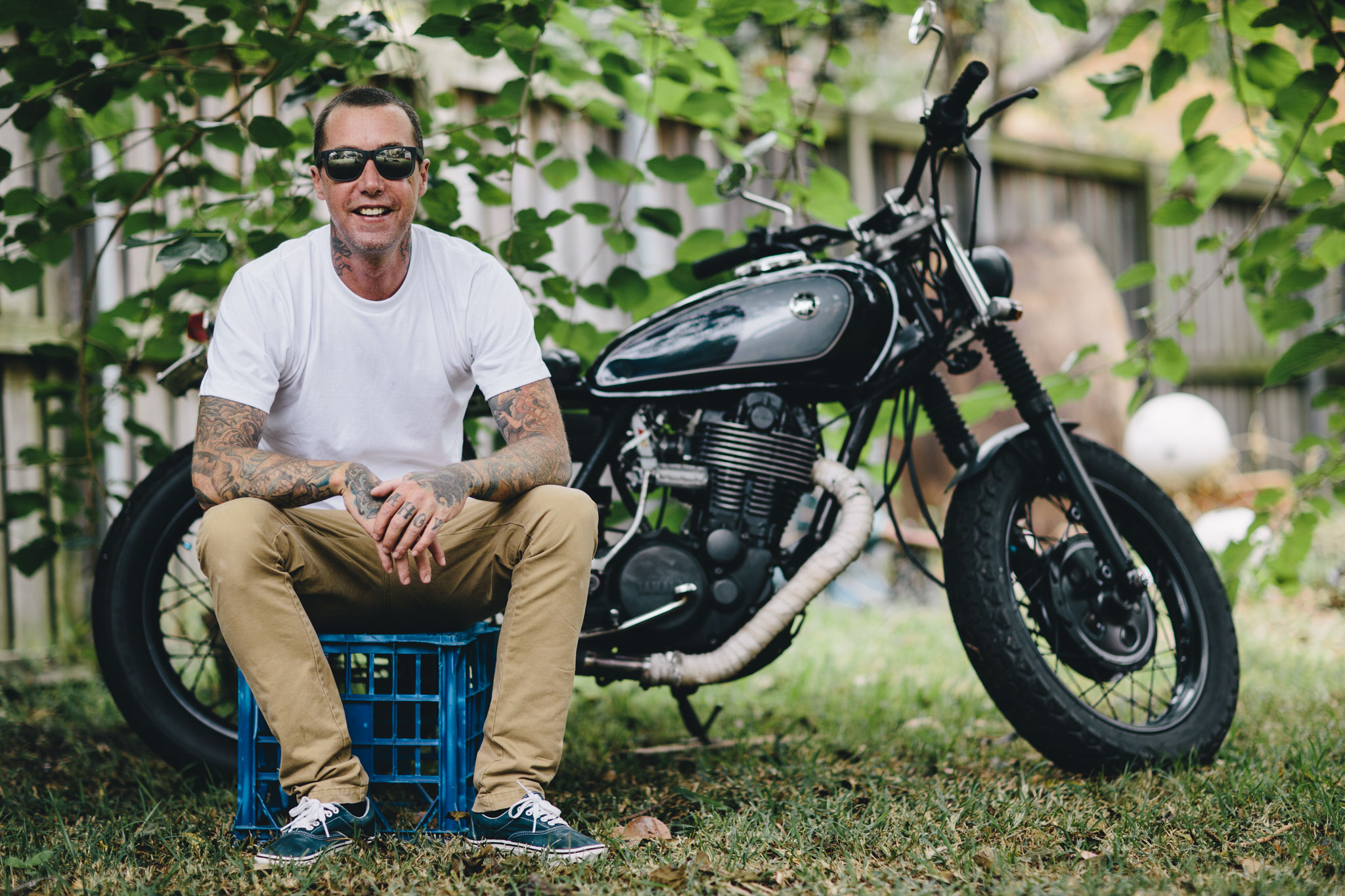 Long before he was belting across the Australian outback on a single cylinder café racer, Rory was first experiencing motorcycling as a young fella sitting on his Dad’s old race bikes. “Dad used to do the Irish Road Race Circuit back in the late ‘70’s and early ‘80’s. He always loved bikes, but when we moved to Australia he was more into surfing and hanging around the beach. A bit later on Dad would get back into bikes when he bought an MV Augusta, and a few of my mates started buying bikes so that was all I needed to get back into riding for myself as an adult.” 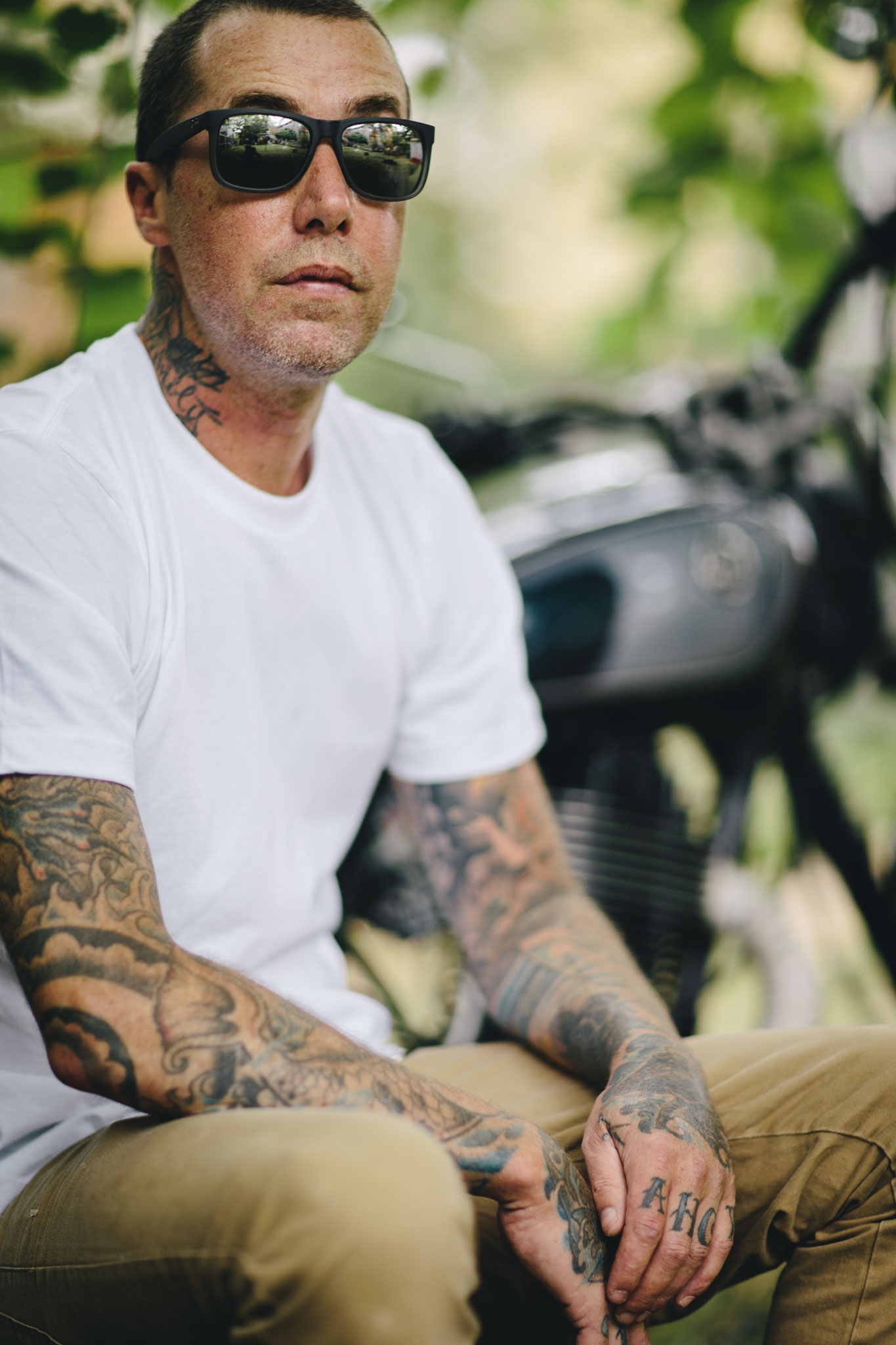 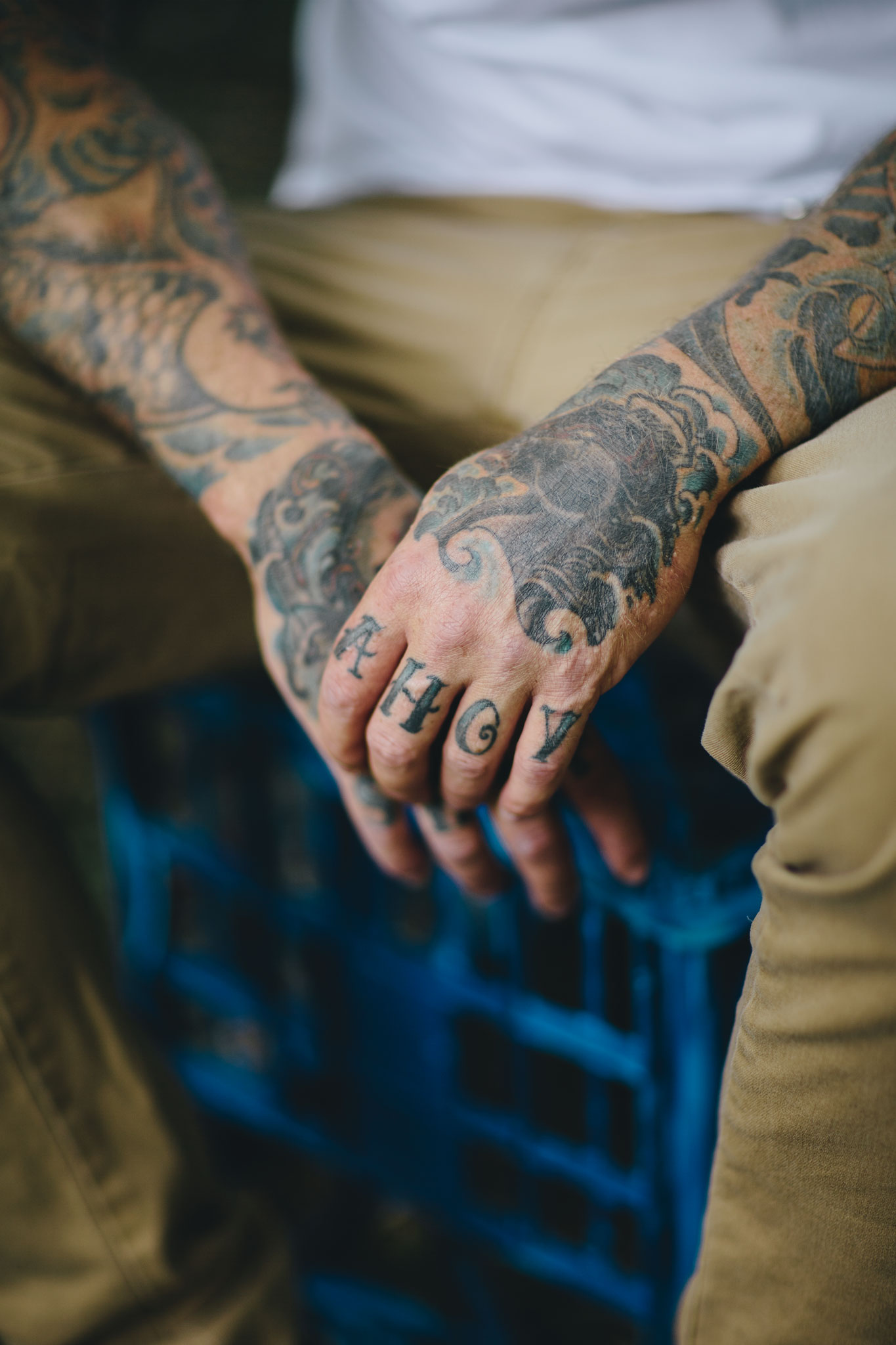 Now a seasoned rider loving life on two-wheels, Rory and his brother had just finished a ride from Sydney to Byron Bay. This kicked some inspiration into Rory’s mind as he enjoyed his well-earned time off from working on boats out at seas for weeks on end. “I always wanted to do a long ride, and so I did a short blast up the coast to sort out any gremlins in the bike. The SR400 handled well, except for a chain guard breaking (who needs one anyway!)” An idea now kicked up – why not ride from Sydney to Perth on this reliable SR400? He had the time off work, and could say, “I love you” to a certain girl in person. Without much more though, Rory had a brief look at a map online, packed some socks and undies, tools, a spare clutch cable and off he went – to ride across Australia. 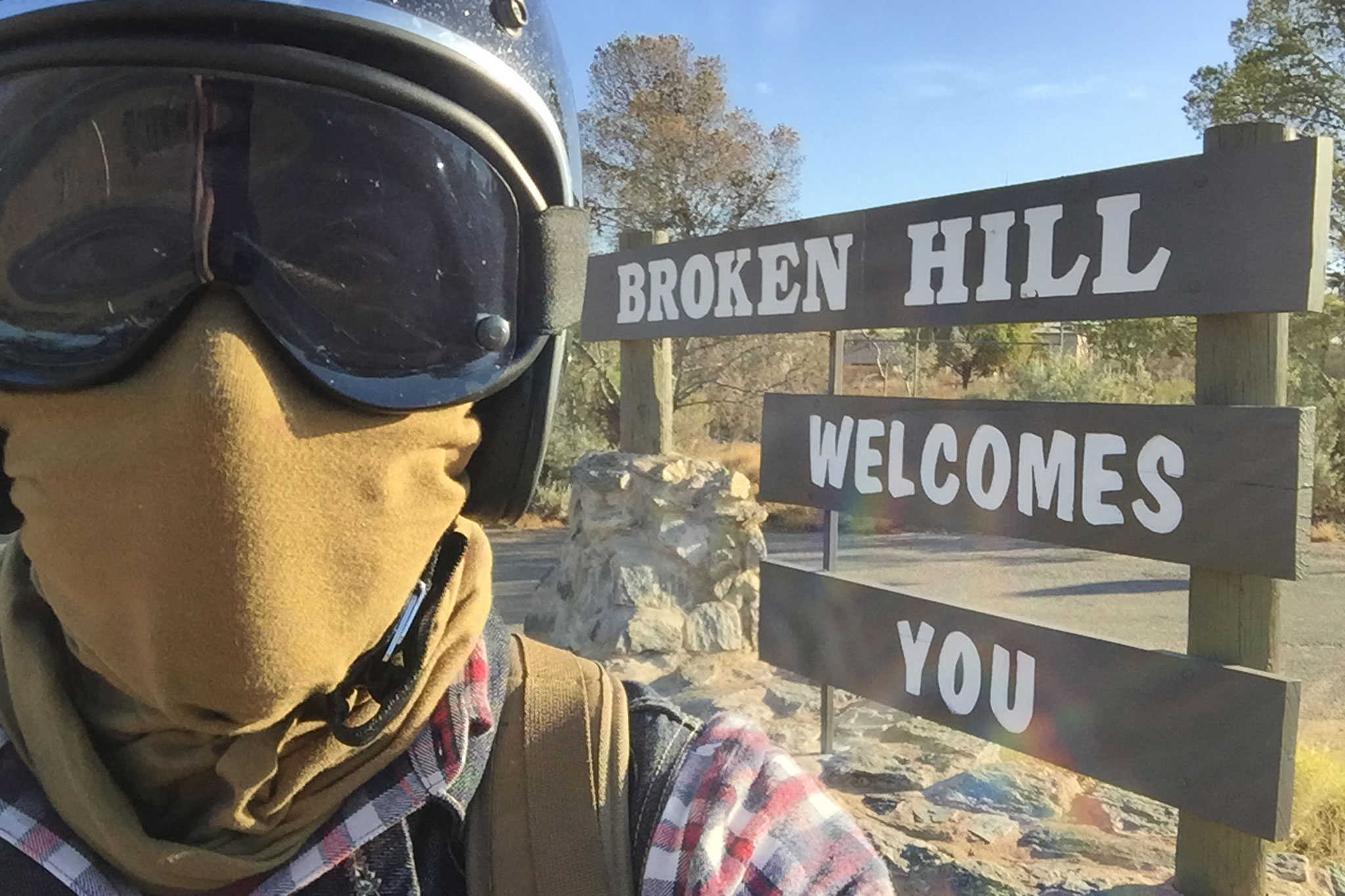 This kind of trip is a dream for many riders. It no doubt has either been done, or is floating about in the heads of many that fantasise of a spur of the moment adventure, taking barely what was required. This care-free take on a great adventure is not doubt itching many from their desks right now. Why on the the SR400? “Well, it’s my only bike! I thought it would be part of the adventure, a test for myself and the machine. Every bike I saw along the way was a tourer with panniers, trailers, comms etc. I thought “What’s the point? They might as well be doing it in a Range Rover!” My brother had a good laugh when I left on the trip, as our bikes could barely make it out of the city without something going wrong back in the day.” 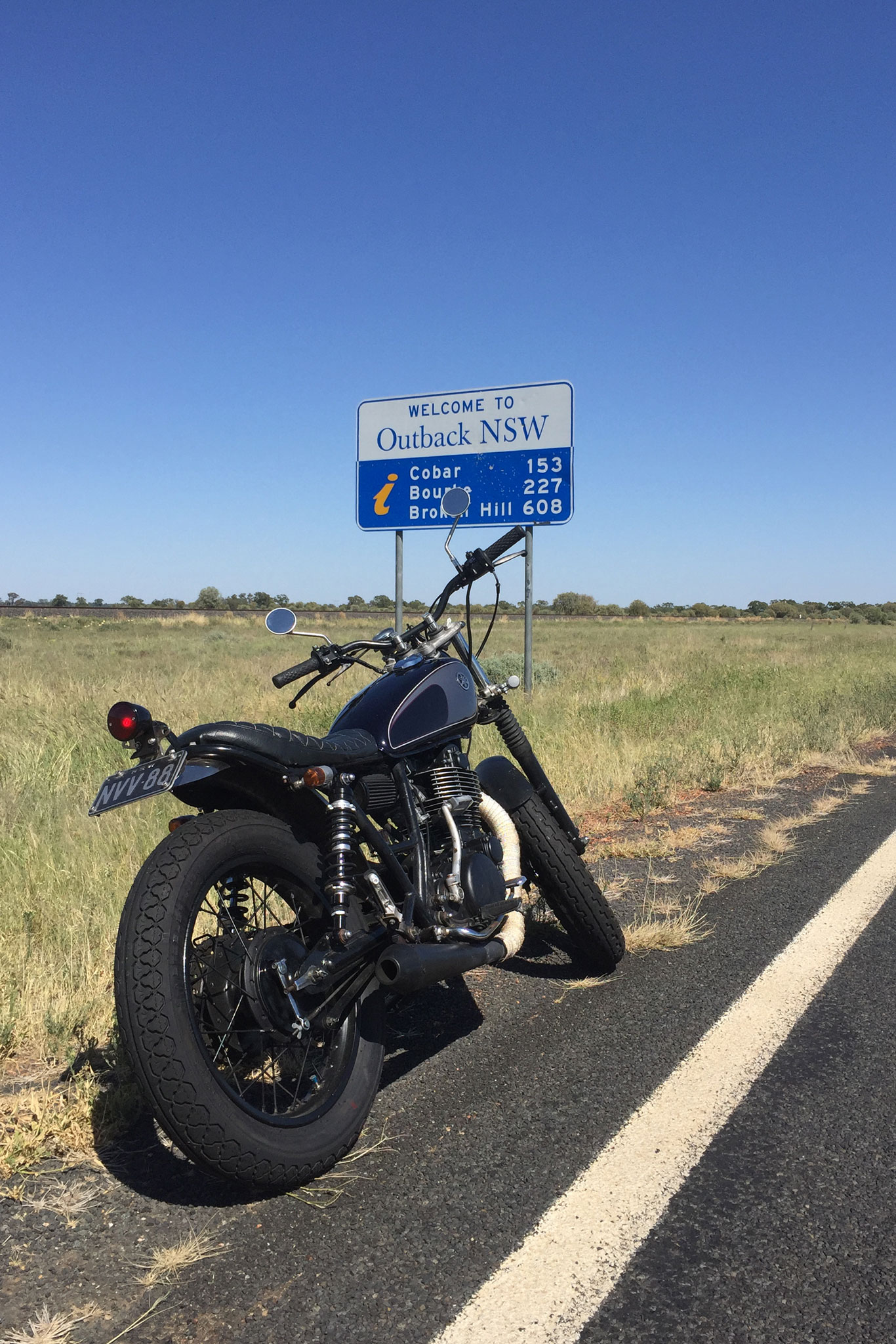 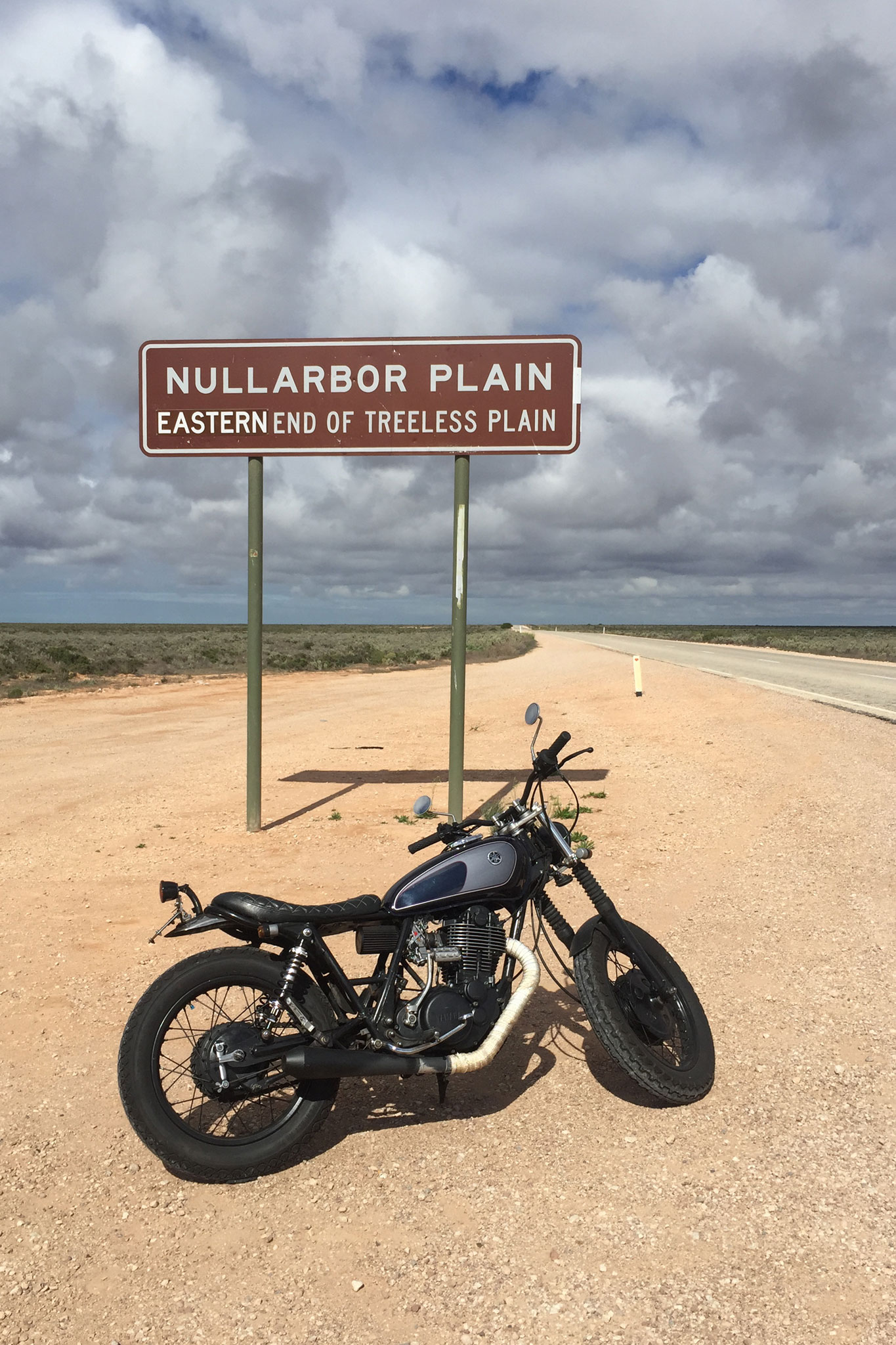 And so, after some digilent preparation in the form just tightening every nut and bolt and performing an oil change, Rory began thumping off across Australia. “The ride from Sydney to Perth was a dream – apart from the heat in outback NSW and coming into Perth. I had a minor issue with my tail light which was easy to fix, but the ride there was great!” Riding back to Sydney from Perth would be a different story, however. 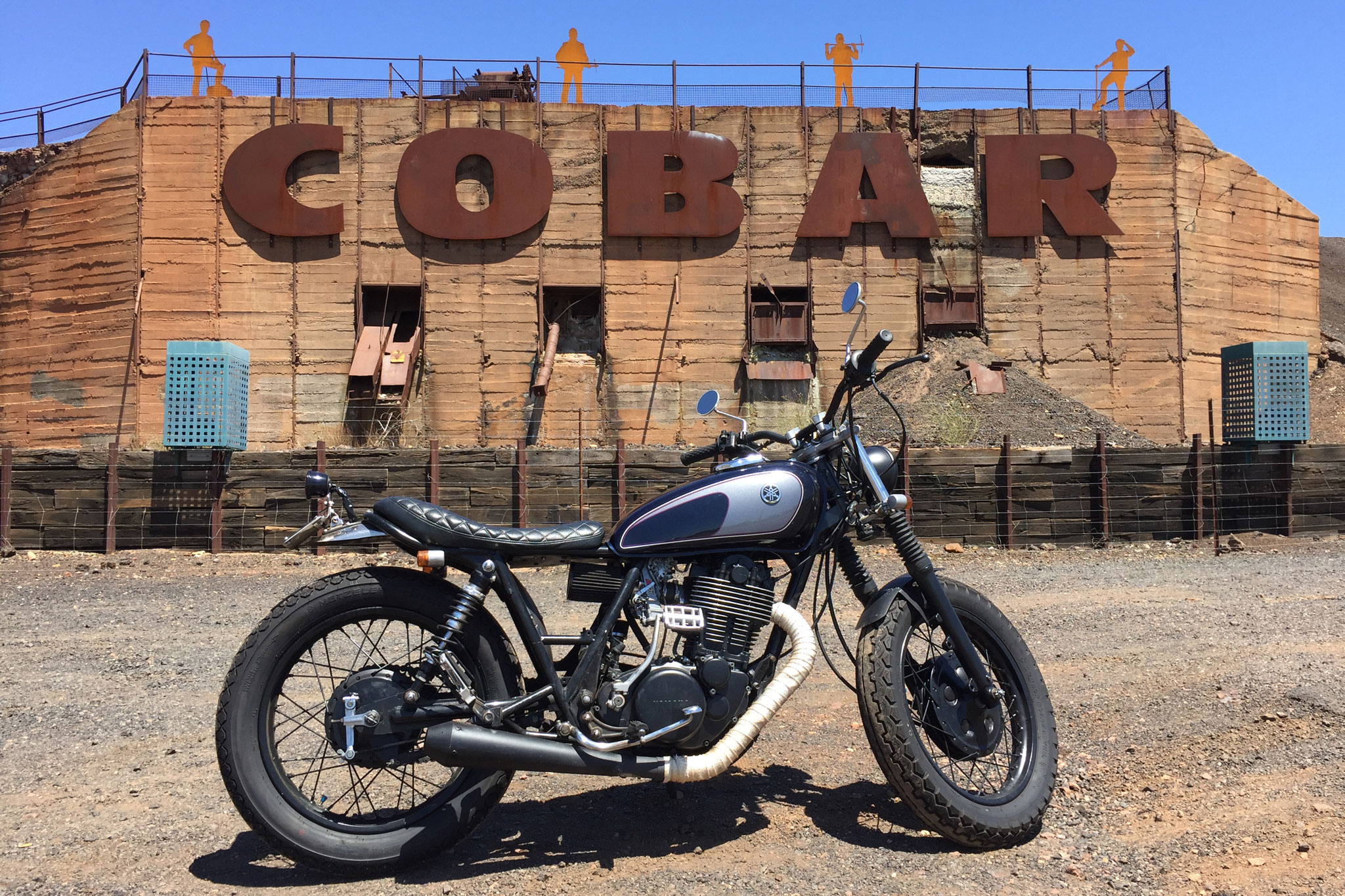 “The ride back was different, as I was pushing to make it home. Instead of sitting on 100kph as I did on the way over, I sat on 120kph which is where it all went pear shaped for my 28 year old Yamaha SR400. First, I lost my entire tail light and number plate assembly somewhere between Ceduna and Kimba. I made it into Port August just as it was getting dark, and got up early before dawn the next morning and hightailed it out of there as Port Augusta was the only palce I saw a cop on the whole trip on the way over. I stopped for a ciggy and could smell petrol, I then realised my fuel line was split. I knew there was a mechanic in Peterborough, so I gunned it through the Flinders Ranges with fuel pissing all over my leg. I made it, got the fuel line fixed and was on my way.” 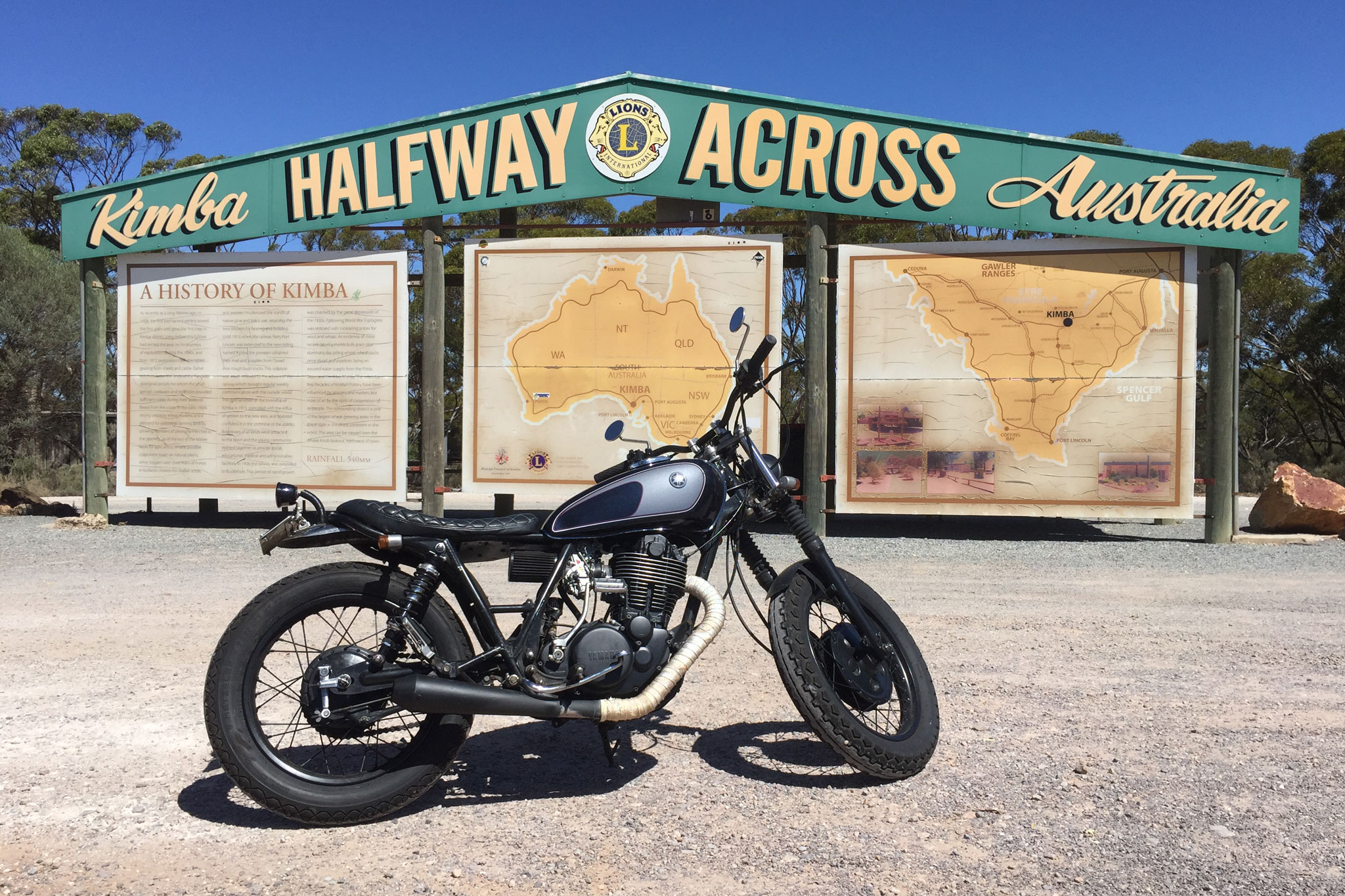 “I had stopped in Broken Hill, and made up a shitty number plate out of cardboard. I figured I’d stay the night before the final leg back to Sydney. 63kms out of Cobar, my left food slipped off the peg. I looked down only to see everything covered in oil. I thought “Well, that’s the end of the trip for me” I thought the engine had let go. I pulled over, but with no phone reception to call motorcycle alliance. So I sat on the side of the road, waiting for someone to drive past. To my luck an hour later a ute pulled up with 2 young ladies in it who gave me a lift to Cobar, where I organised to get my bike towed into town. I got the oil-covered machine to the mechanics and started pulling it apart. I realised the leak was coming from a tiny hairline crack in the frame (oil in frame bike). “ 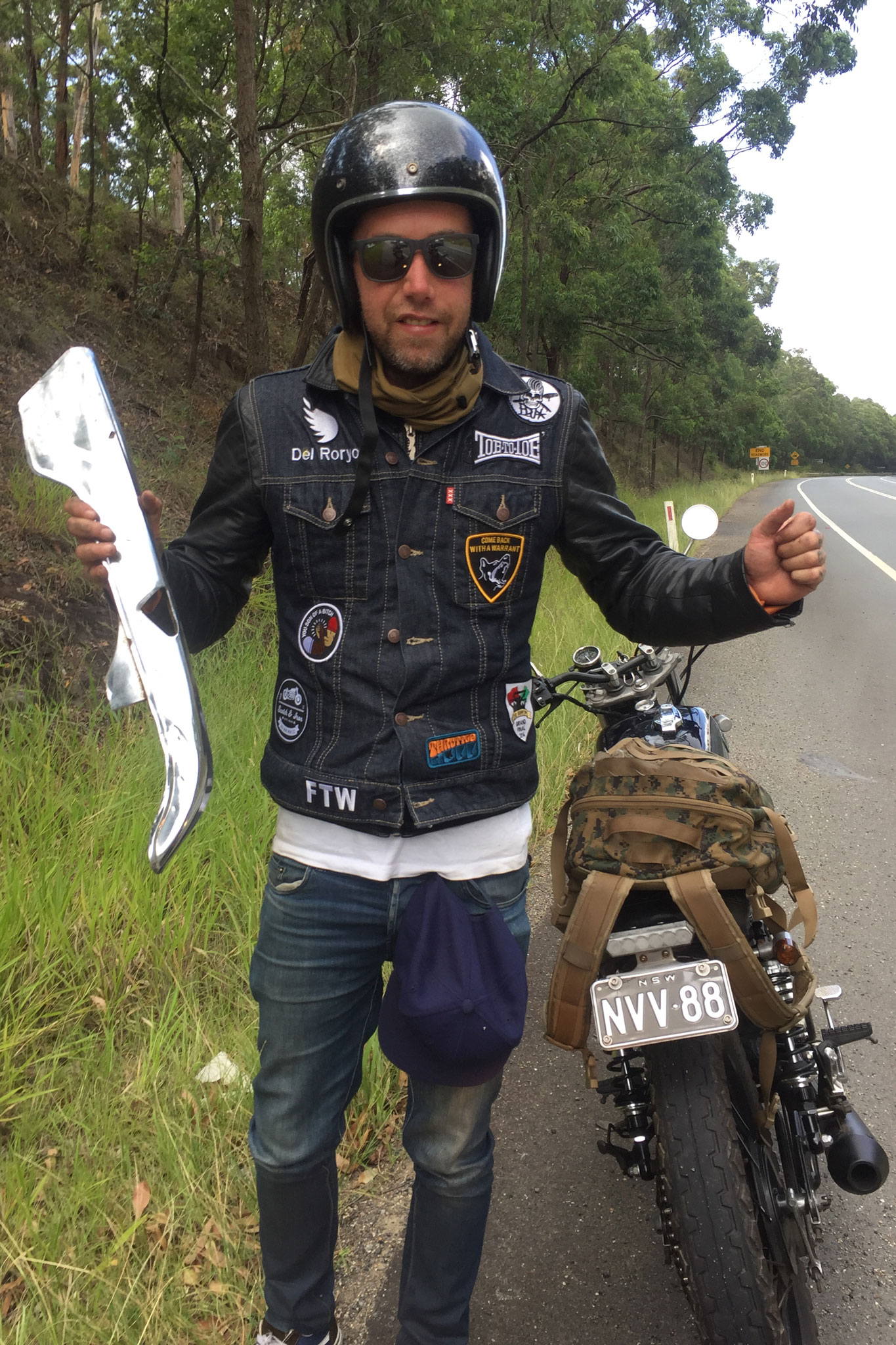 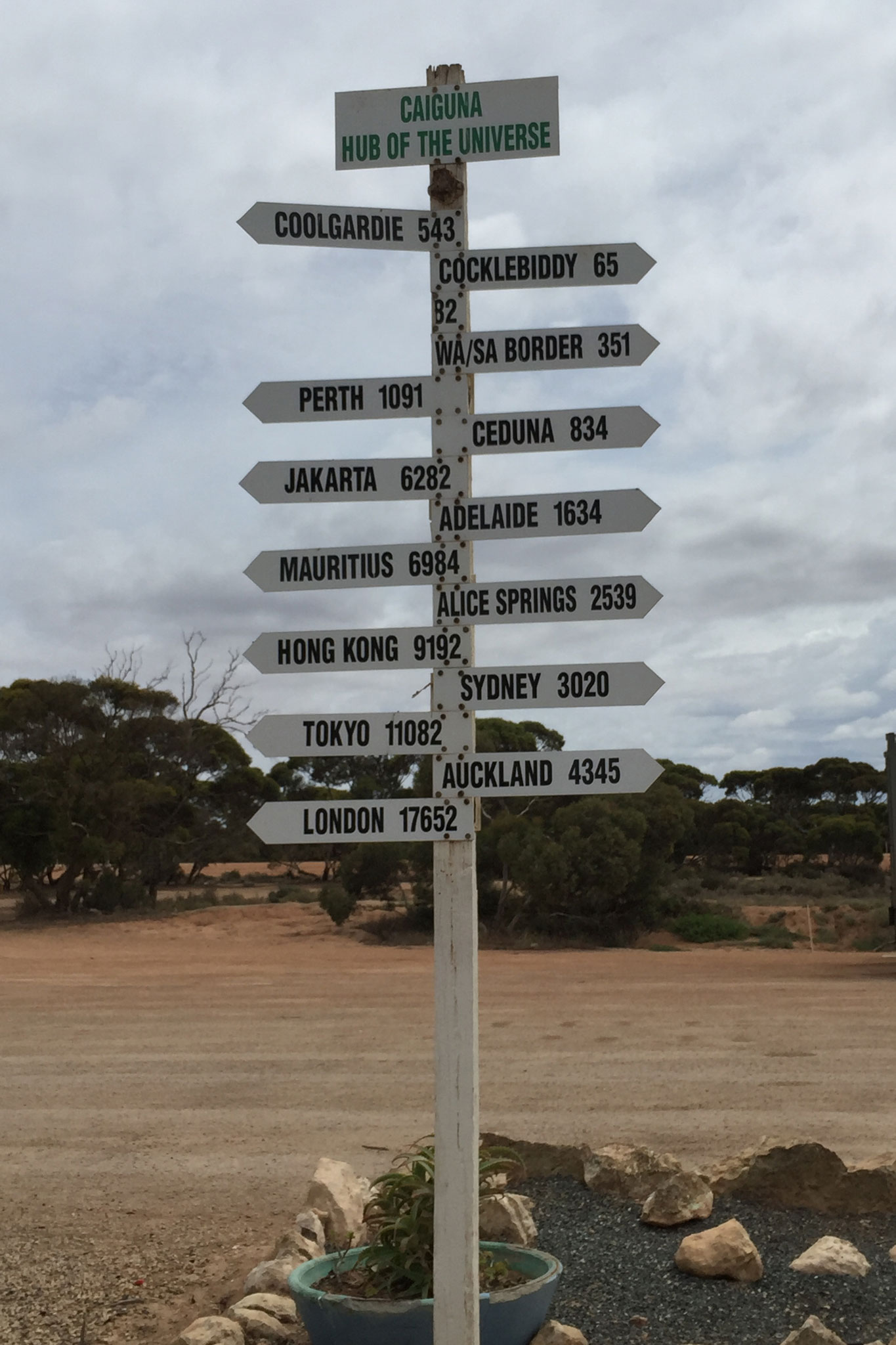 “I had to wait until the next day to get the crack welded up, so the boys at the mechanics invited me out for a beer. After some beers, I was suddenly there in a ute full of pig dogs, beer, whiskey and a massive spotlight on the hunt for pigs out in the middle of bloody nowhere. We couldn’t find any pigs, so we stopped by the Tilpa Pub for a few beers… where we found that the local sheep shearers didn’t take too kindly to us hunting on their land. The next day the crack in the bike was fixed and I powered on home to Sydney, a broken but incredibly happy man.” 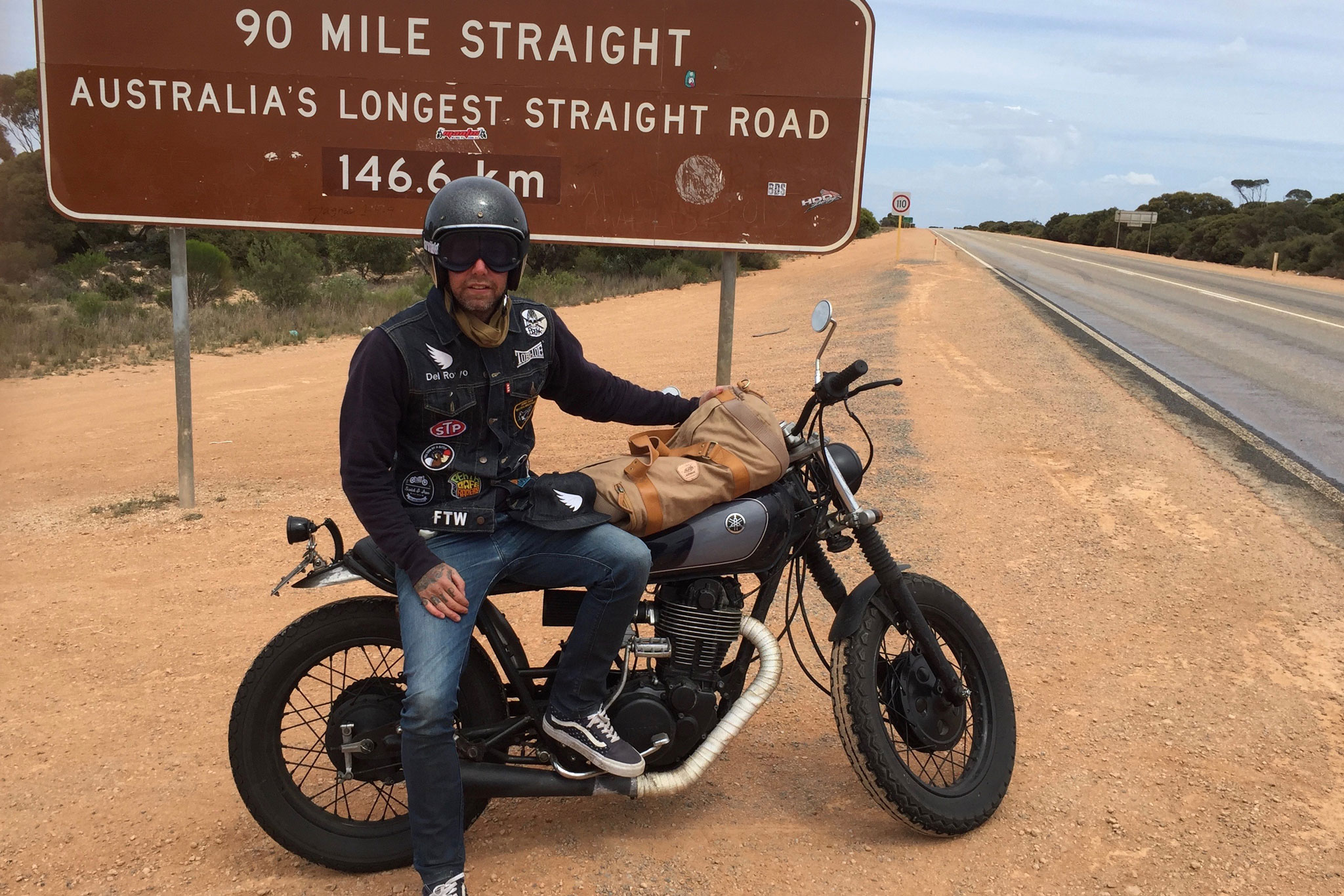 “It was incredible just seeing how vast this massive continent really is, the way the scenery changes every few 100kms out on the Nullarbor is insane. The wildlife is equally as impressive, I think Australia has more feral goats than any other animal, I saw thousands of them! I rode past a wreck from the night before and it was a camel that hit a 4WD; absolute carnage. I would highly recommend to anyone that’s considering it to just do it, get on your bike and just ride and enjoy the adventure. If I were to do it again, I’d maybe take my time and go with another rider as it can get very boring, but I wanted to push myself mentally and physically. 1000kms a day for 4 days in a row in 30+ heat and on an SR is not the most comfortable experience, but an experience all the same.”

And the girl Rory had ridden thousands of kilometres to say “I love you” to? Well, turns out he didn’t tell her. Rumour has it that he has whispered it to his SR400 on a few occasions however…

To have your own adventure simply pull your thumb out, jump on your bike, and get riding. Go on, do it. 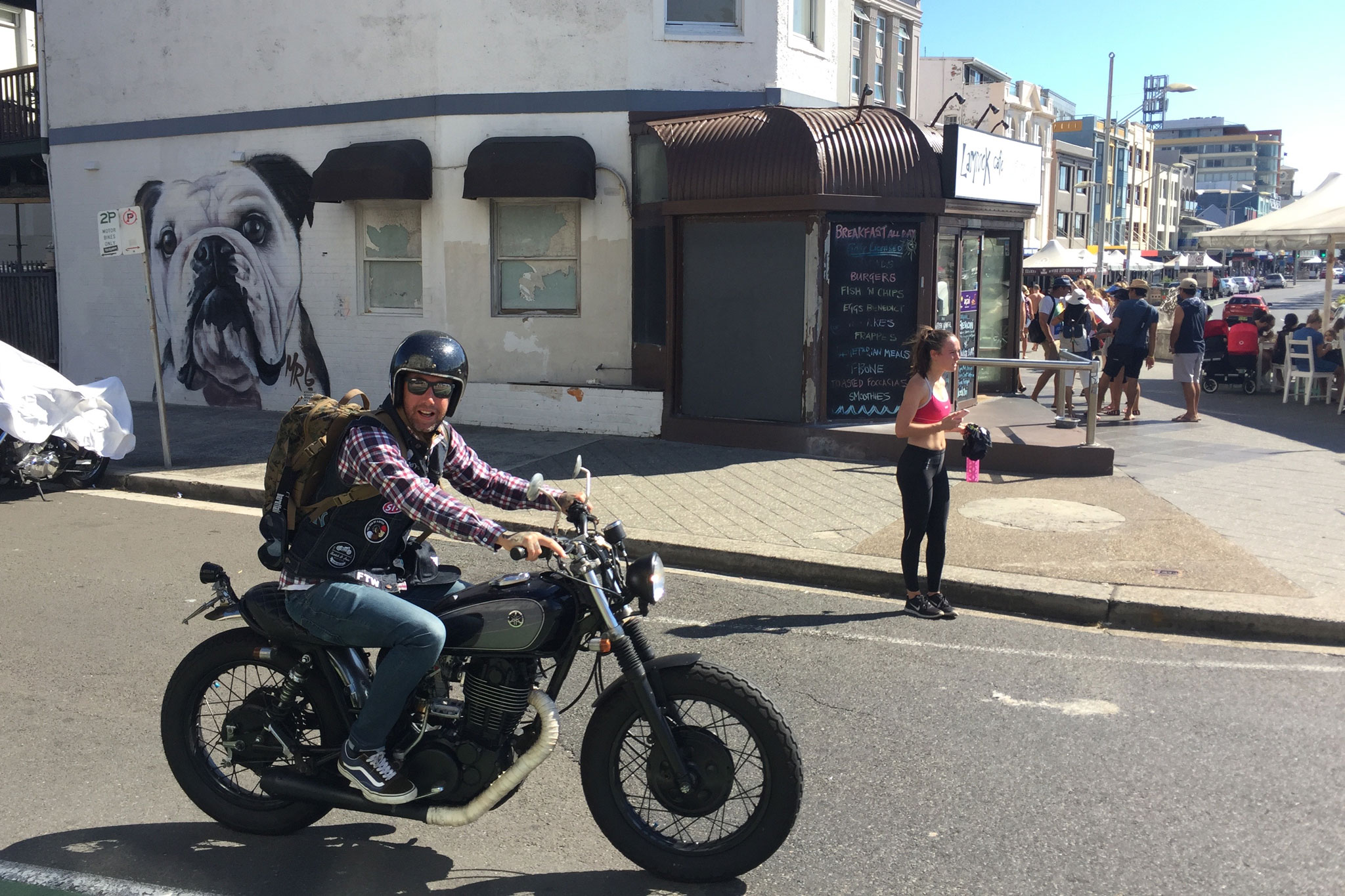 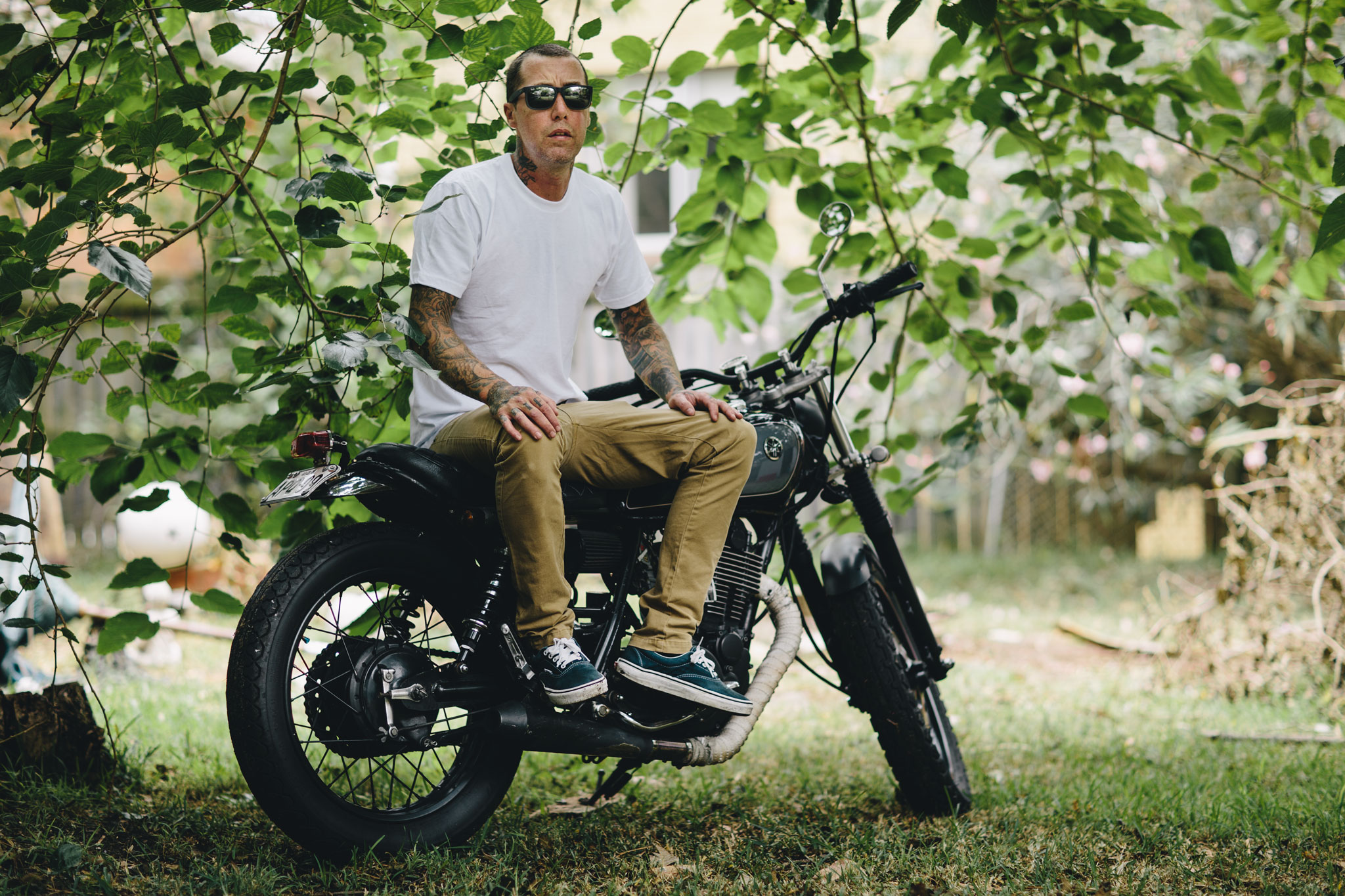 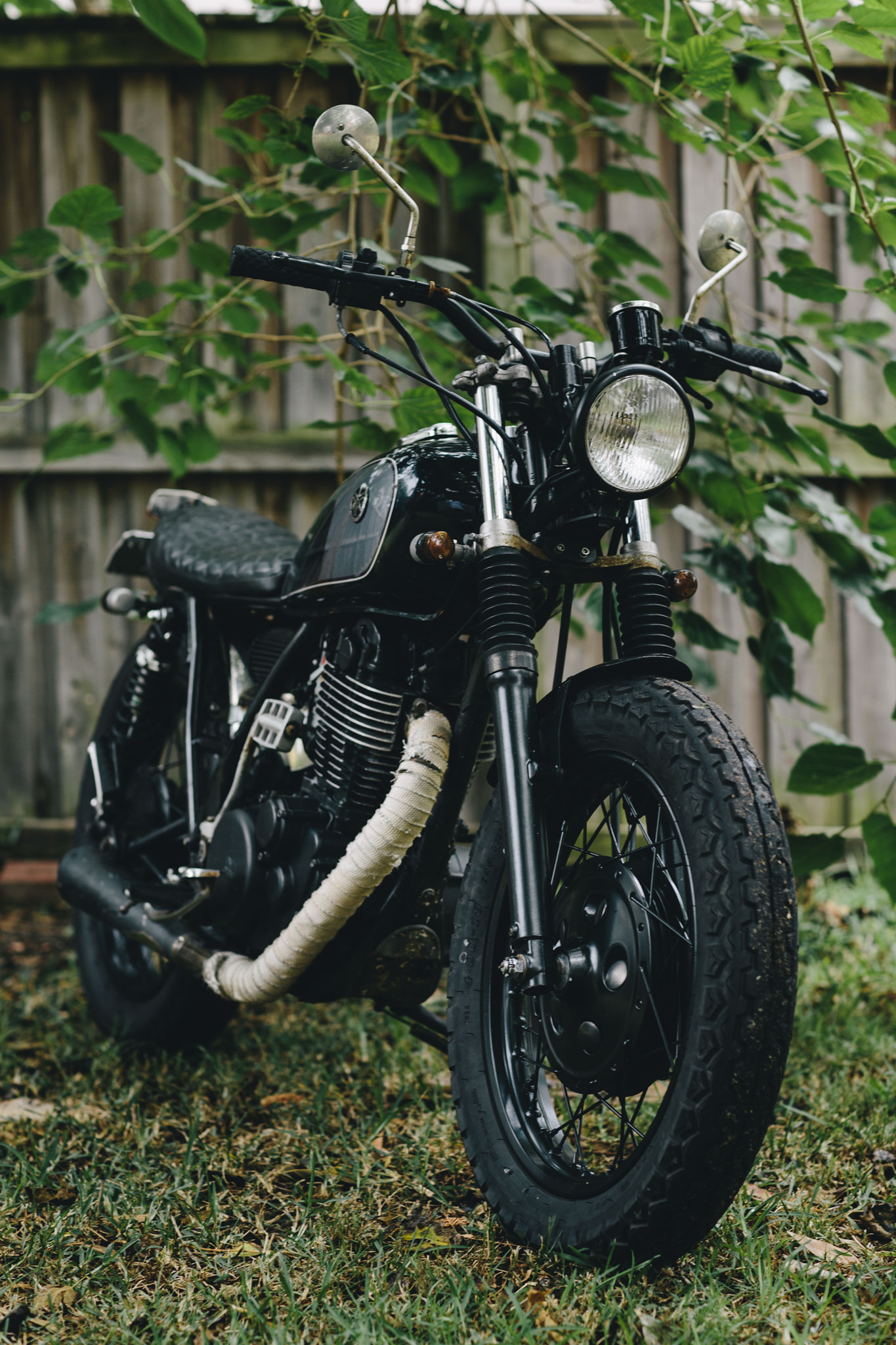 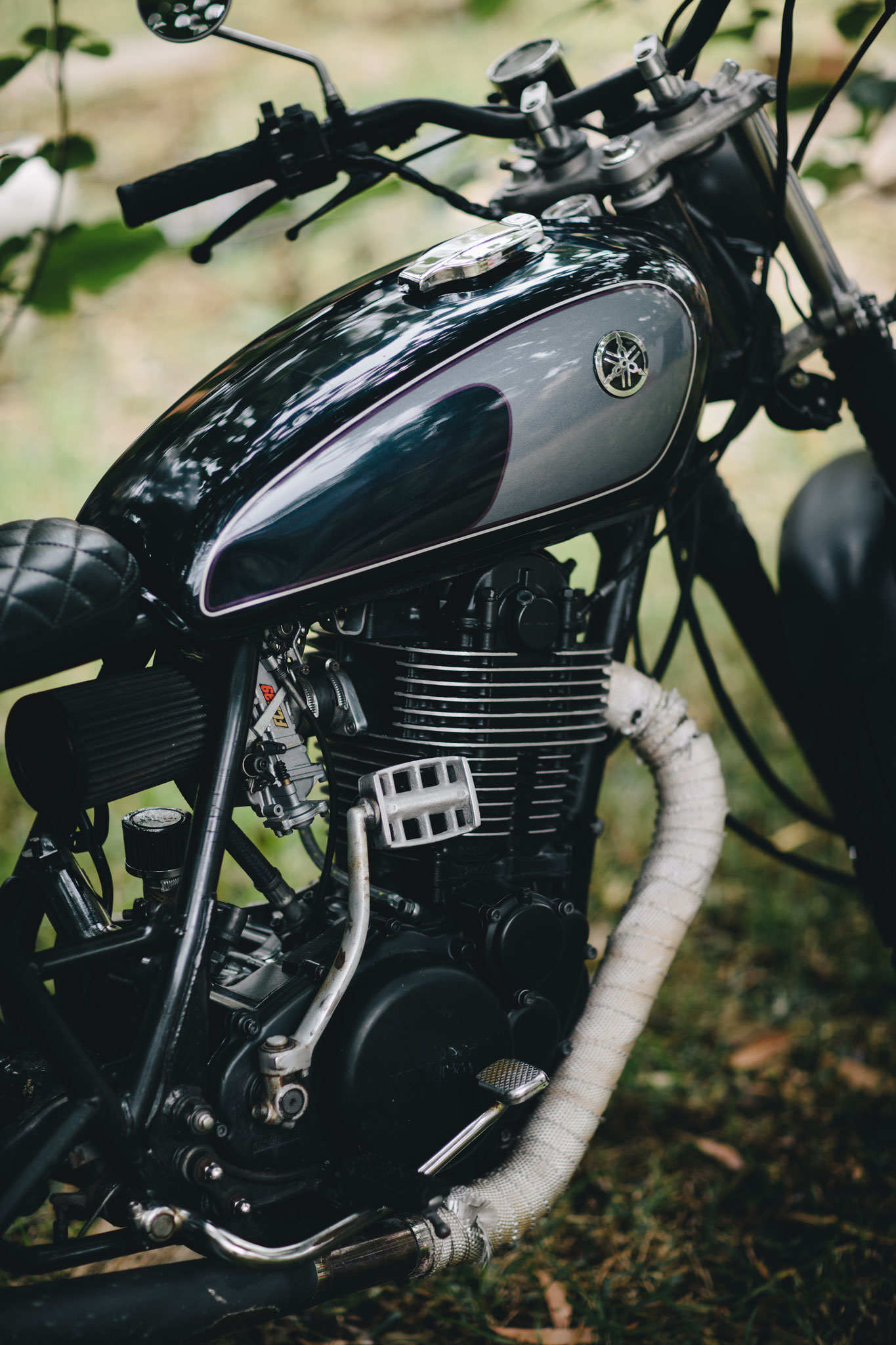 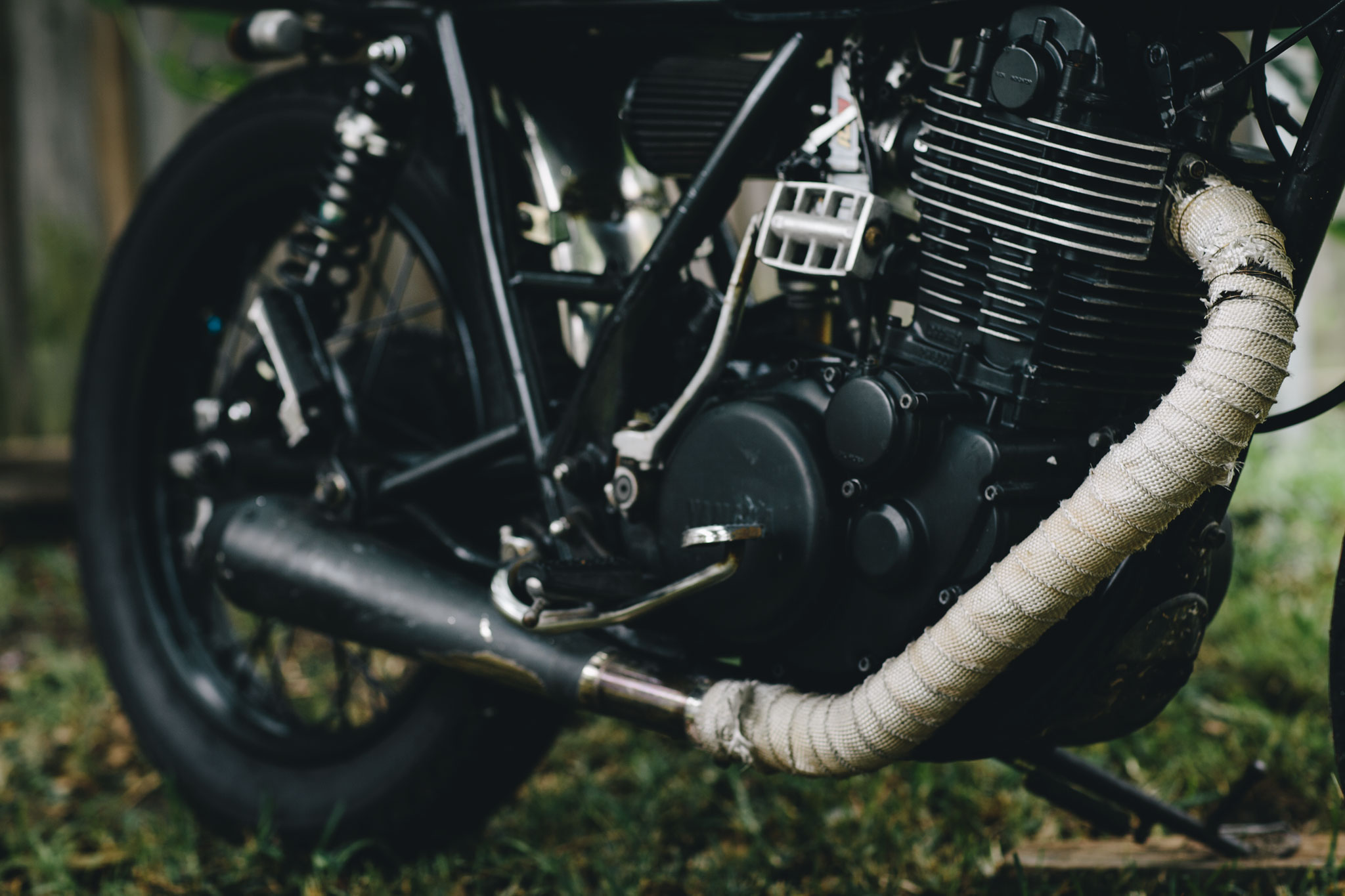