It wasn’t long after entering the world of motorcycles that Lee would catch the custom bug, as he tumbled down the rabbit hole of Café Racers and their history. This passion would be expressed in the custom Cafe Racers he’s created since, and this 2003 Ducati Monster 1000S is no exception. 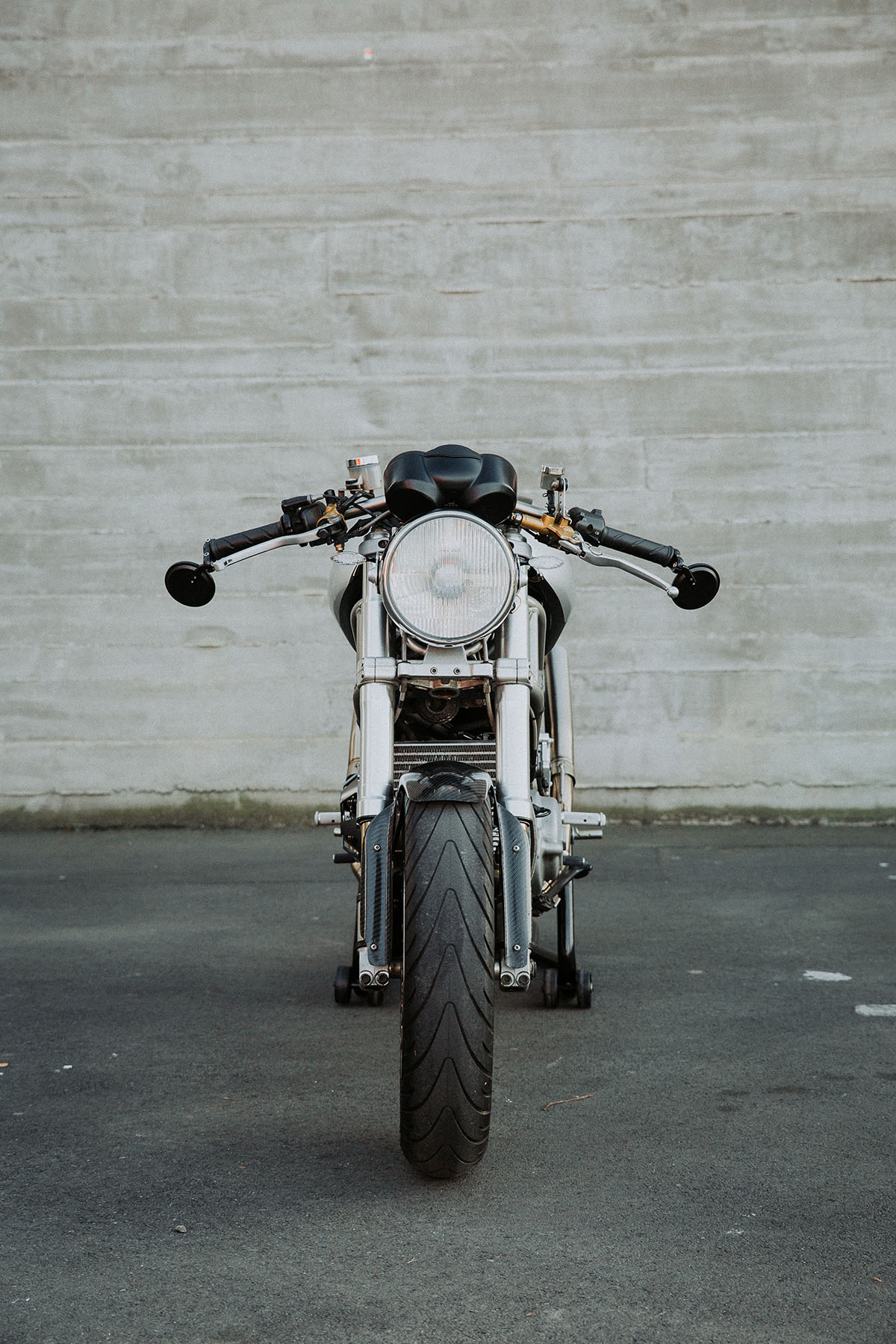 Lee was originally belting about on the roads with scooters, going for big trips with mates around New Zealand while having a complete blast. “It was during one baking hot day north of Kaikoura in 2009 that I thought “How cool would it be to do these trips on a big bike?” But I wanted something that had the same retro feel as my old Vespa. So it was a couple of months later that I bought myself a stock Triumph Bonneville.” 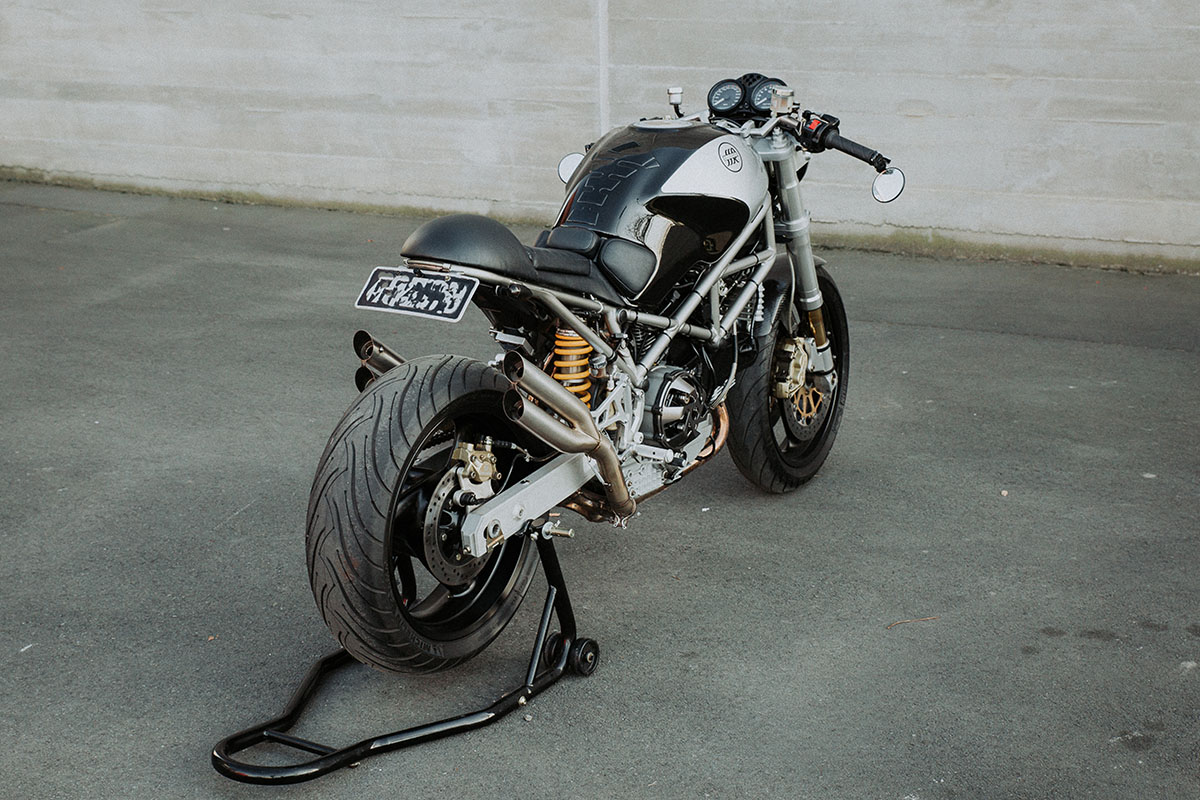 Owning this new machine, which suffice to say certainly had a lot more power than his 150cc Vespa, was great but there was a little something missing for Lee. It was upon looking into the rich history of Triumph Motorcycles that Lee came across the Café Racer scene that was flourishing in the 1960’s. “I was hooked from the start – the bikes, art, fashion and lifestyle. It was just before the big earthquakes of 2010 that I customised the Triumph into my first Café Racer and loved it.” 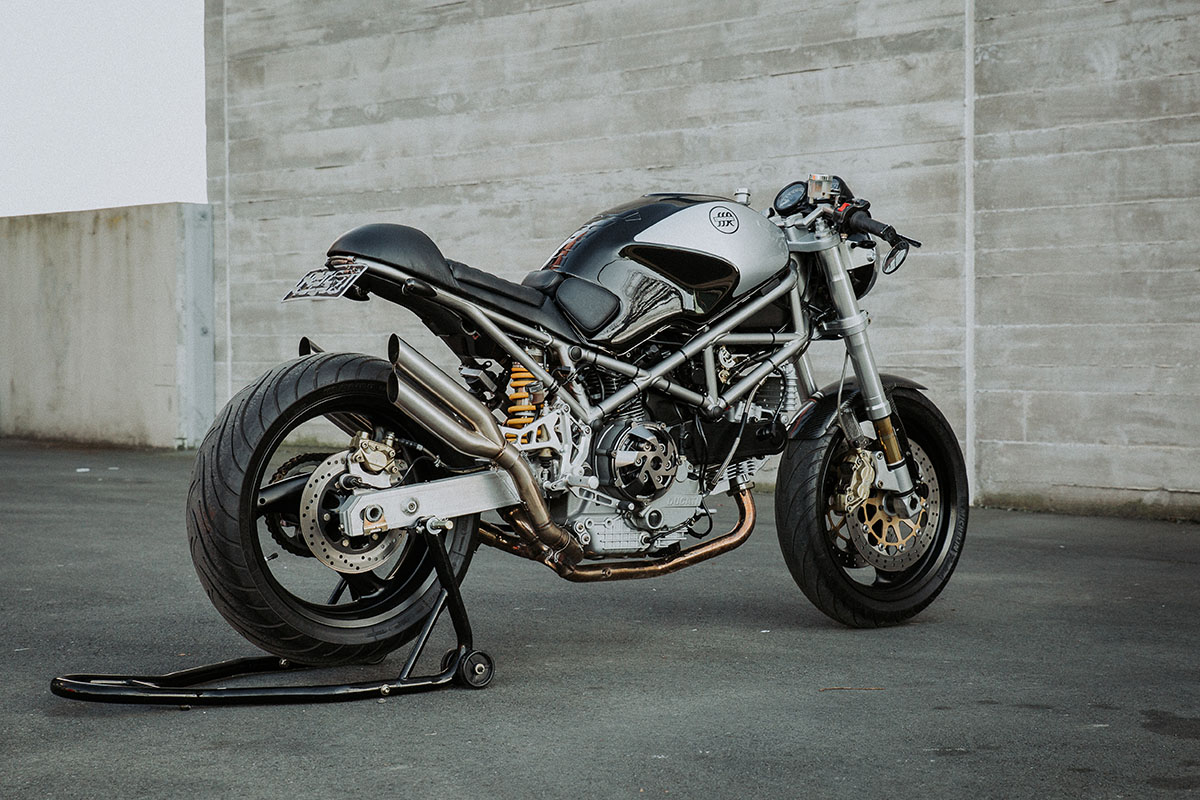 The custom bug had now firmly attached itself to Lee, and a 1998 Yamaha XJR1300 would soon find its way into his shed to receive a modern Café Racer makeover. “Its very rewarding transforming something standard into something unique that represents the art and lifestyle of the Café Racer. I enjoyed riding the XJR during the summer, and I sold the bike back in March 2017. With the proceeds from the sale I was in a position to purchase a different bike. I wanted to create a 3rd Café Racer and decided to purchase a 2003 Ducati Monster 1000S. I wanted to get away from the usual Japanese customised bikes.  As long as the servicing is kept up to date, these old Ducati’s are fine and are simply amazing to ride.  There really is something special about Ducatis.” 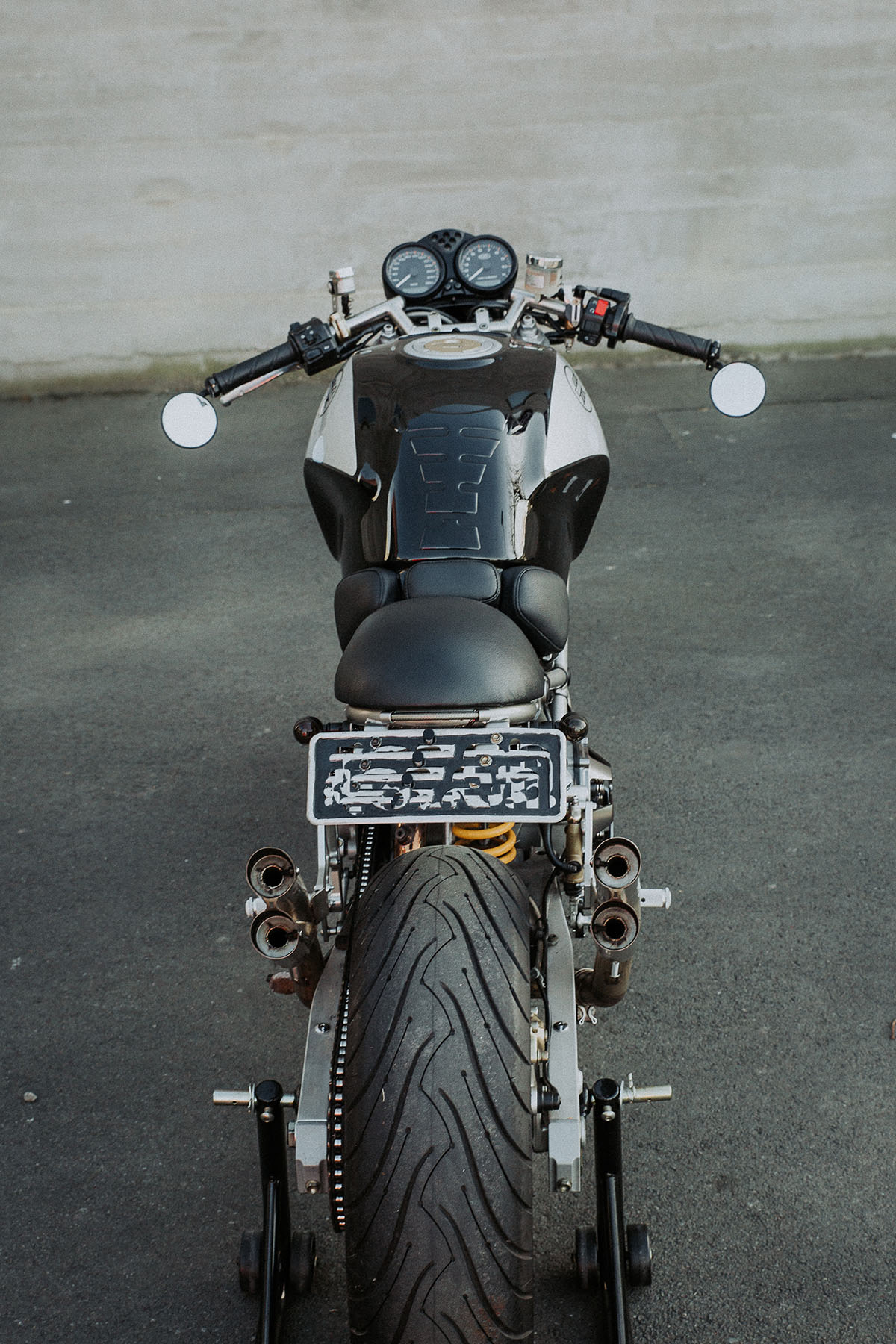 As with Lee’s previous projects, the Ducati Monster would be a naked bike to start off with. After some rough preliminary sketches, he would attack this new project with the same battle plan as is previous builds. “The most complicated part in this build would be the rear of the bike, and trying to get the seat pan right. There are many angles, and not having all the required tools at the time proved too difficult. So after many failed attempts I enlisted some professional help. I used Corey Taylor of Da Vinci Steel Craft in Christchurch to help with the seat pan and rear frame chop.” 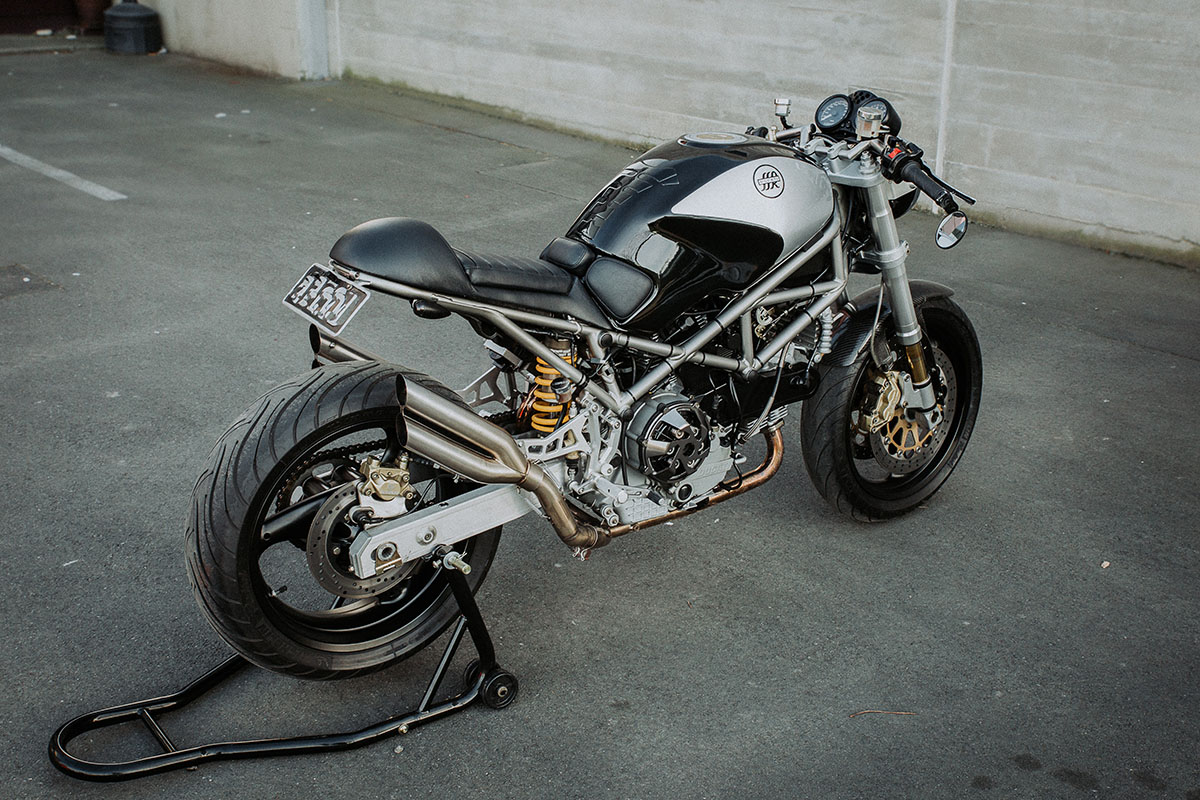 Some much sleeker, more stylist DanMoto Twin XG pipes were added in favour of the very uninspiring stock system. “I chucked the new pipes on and took the bike out for a test ride, and the noise was obnoxiously loud. Out on the country roads it sounded amazing and open when letting off the throttle and changing gear. But for everything else it was simply too loud. The solution was simply ordering baffles from DanMoto, as riding the bike for any length of time without was a nightmare.” 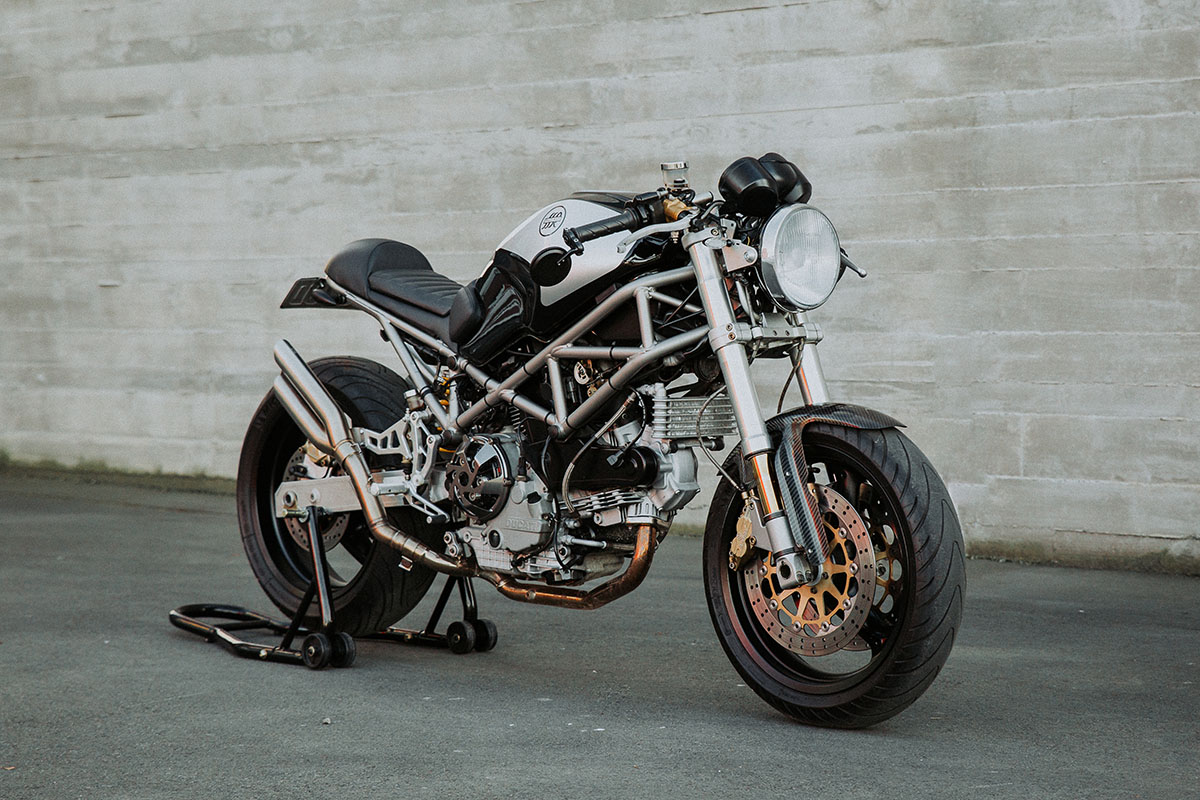 “The paintwork was completed by Muzza’s in Christchurch. The tank threw us some unexpected issues that resulted in a complete restoration on the inside of the tank, with replacement fuel pump and filters. Muzza was great at fixing these issues thankfully!” 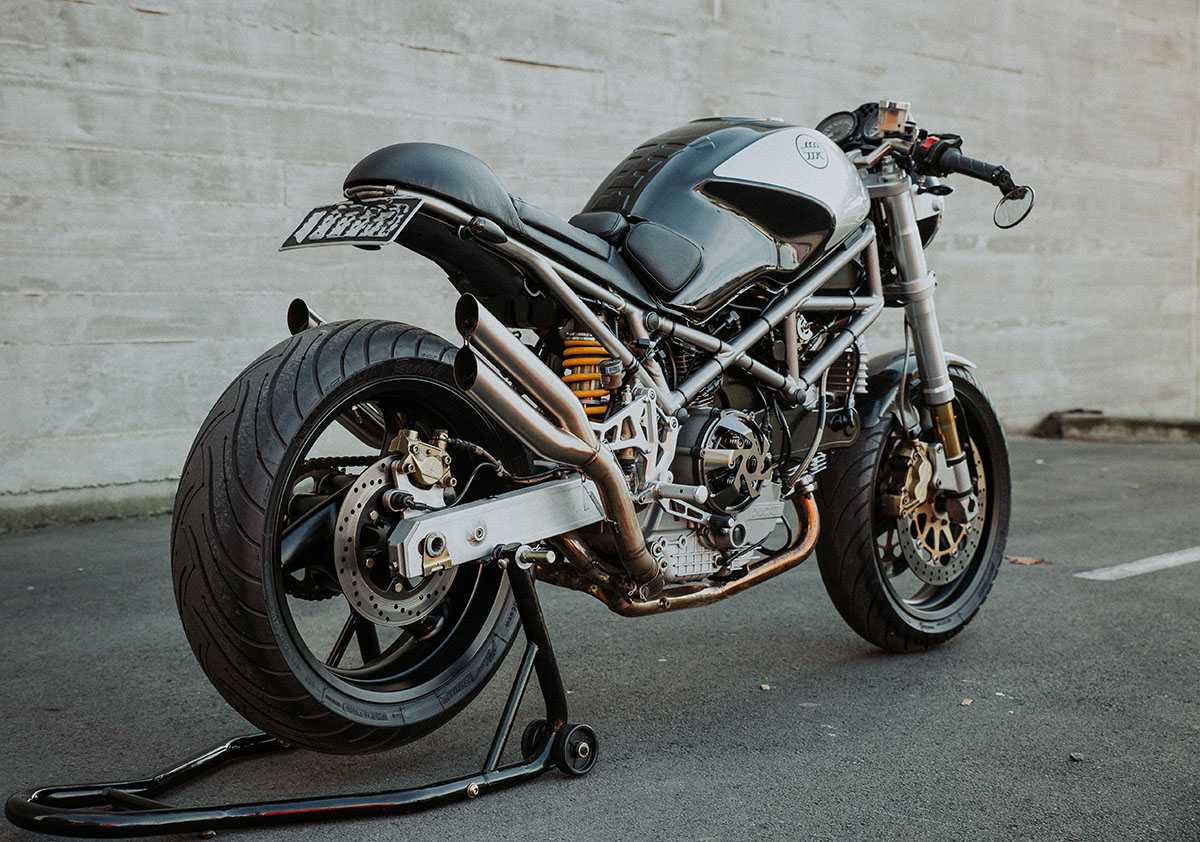 “These old school Monsters are great bikes and provide a great canvas to work with. My aim for the bike was to transform the Monster and accentuate its amazing engineering details and attempt to give the bike a mean, brutal yet stylish look.  Which in my opinion these amazing machines truly deserves.” 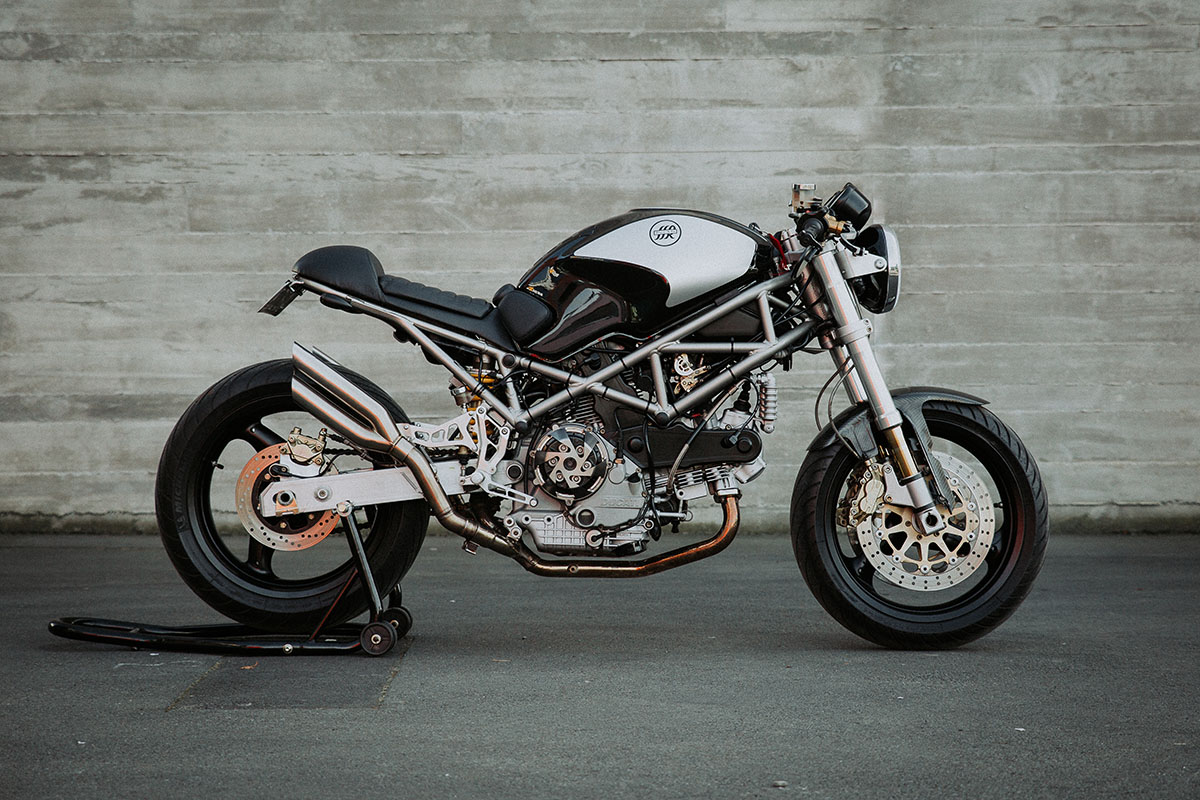