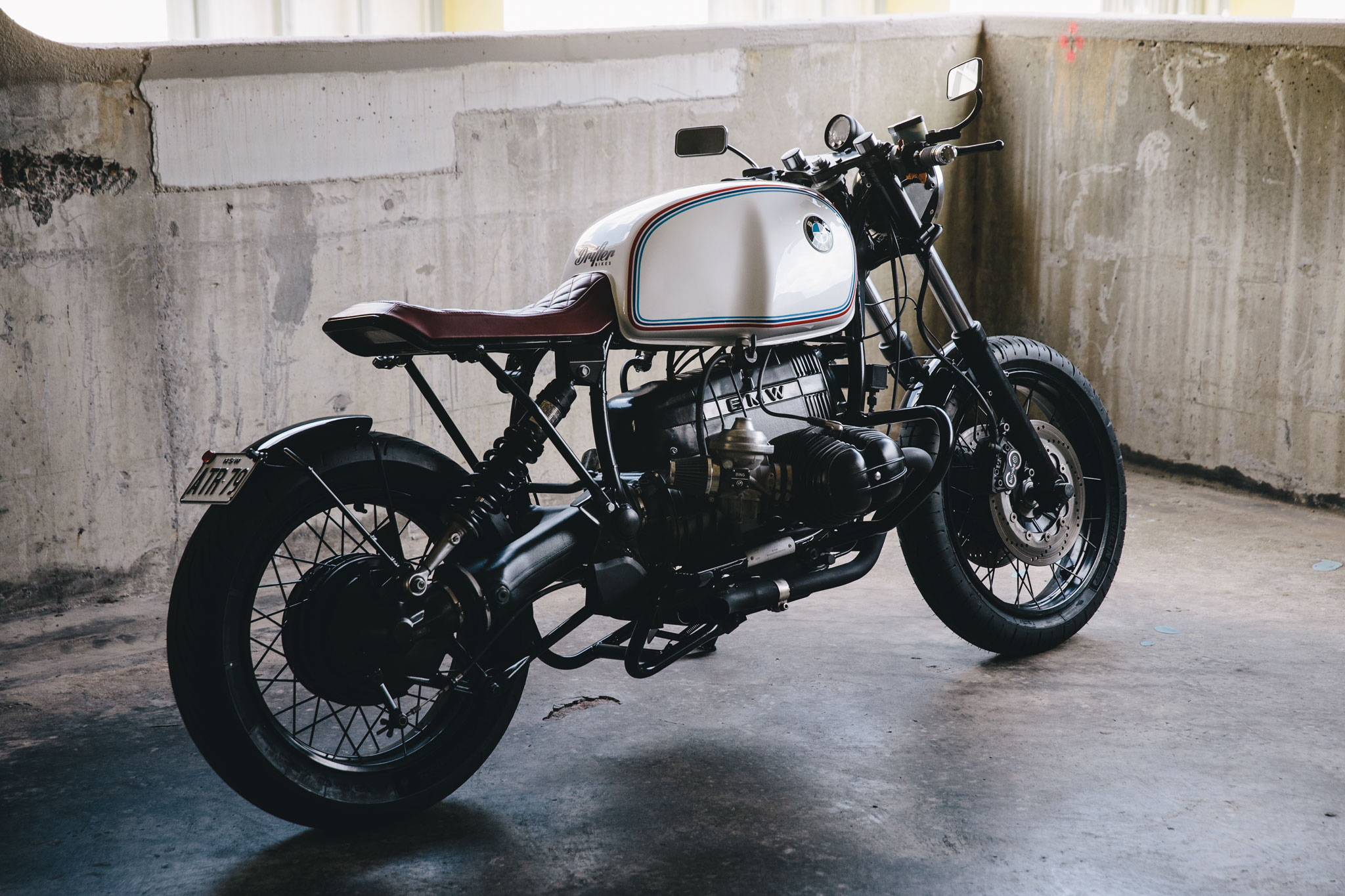 Having built countless custom machines for himself, Paul found himself in a creative rut. Something that deviated further from what he was normally creating needed to be made to sate his chopping desires – fortunately some beers with a mate would turn to be the catalyst for just such a build. 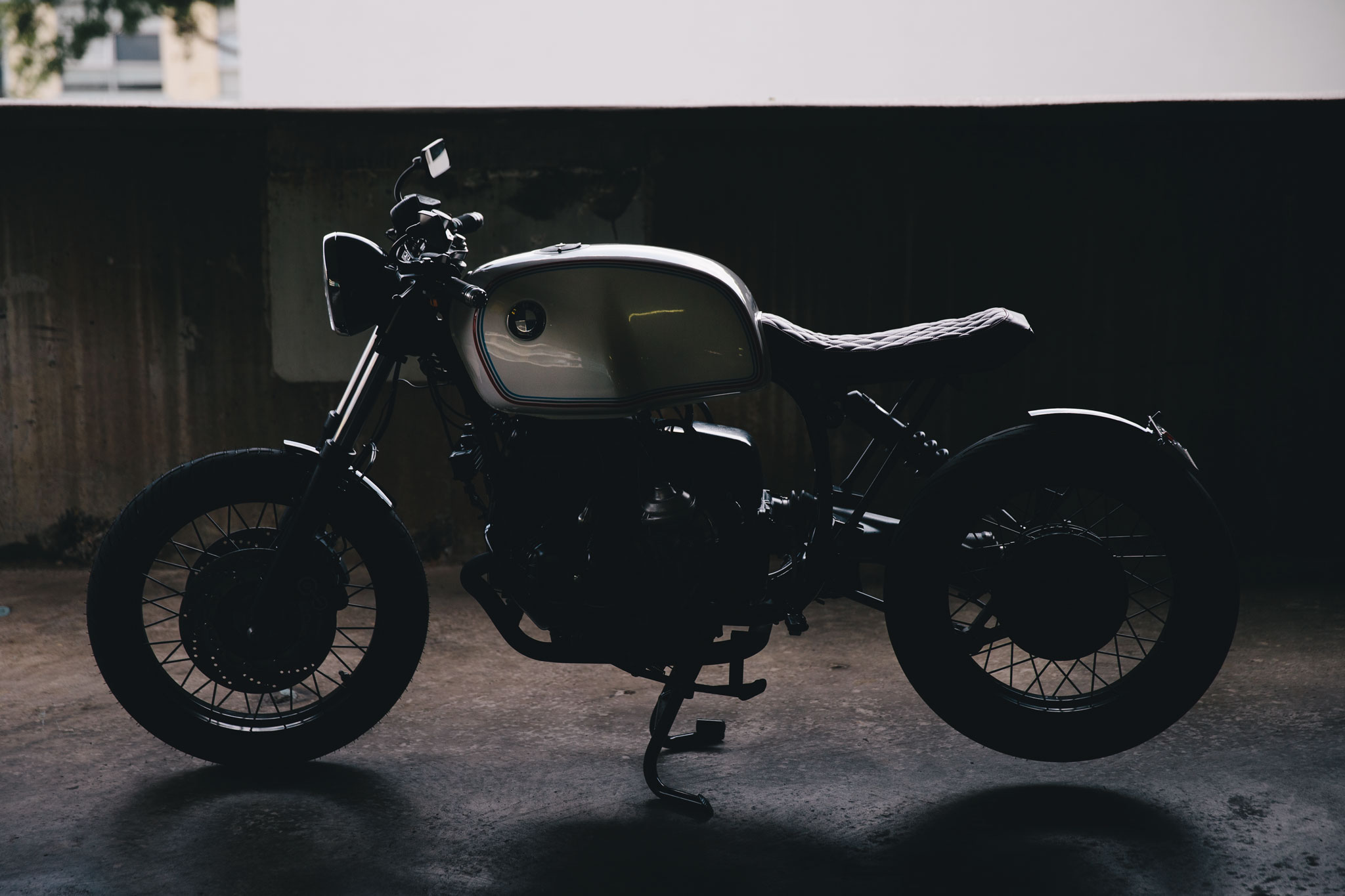 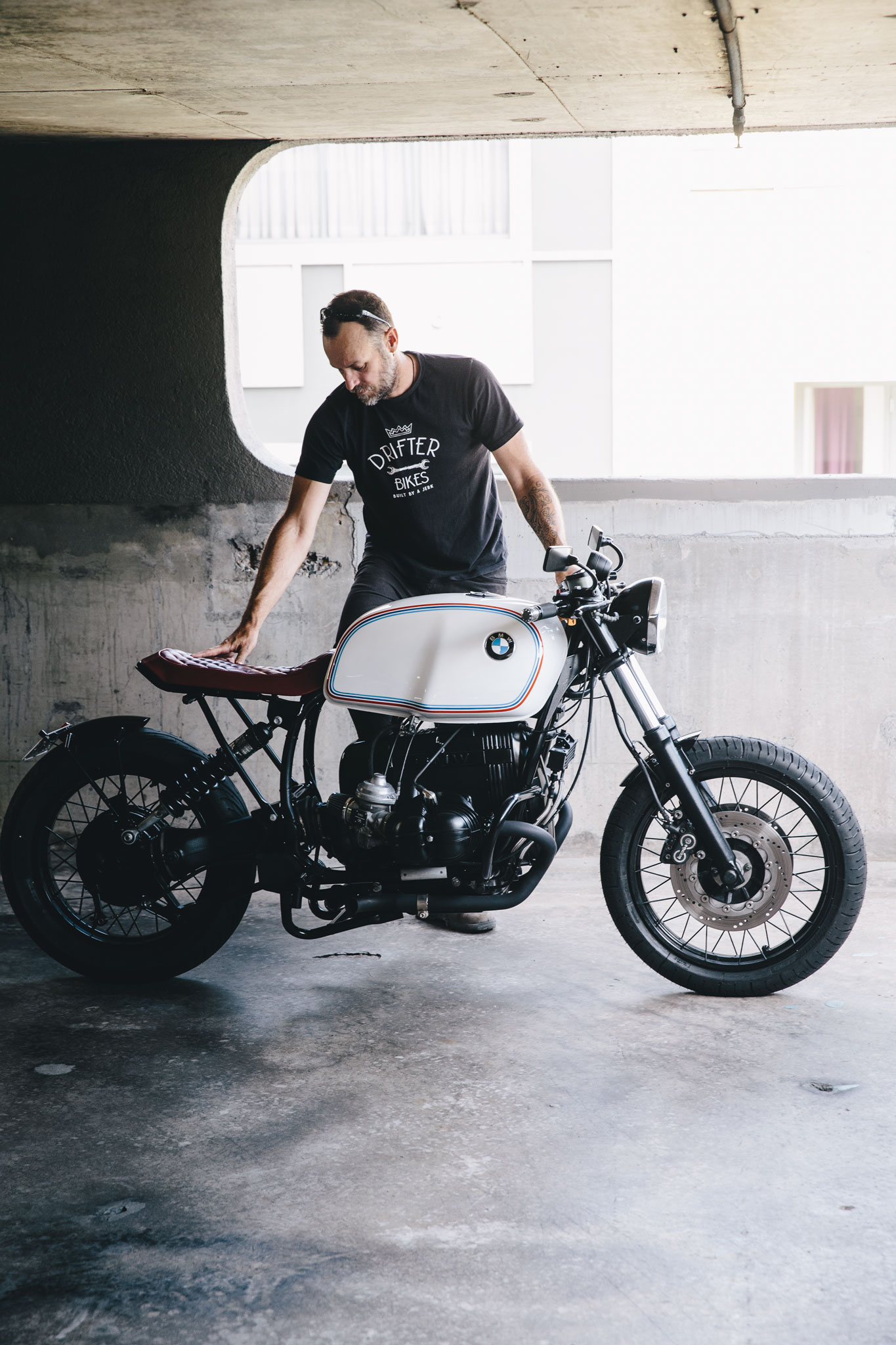 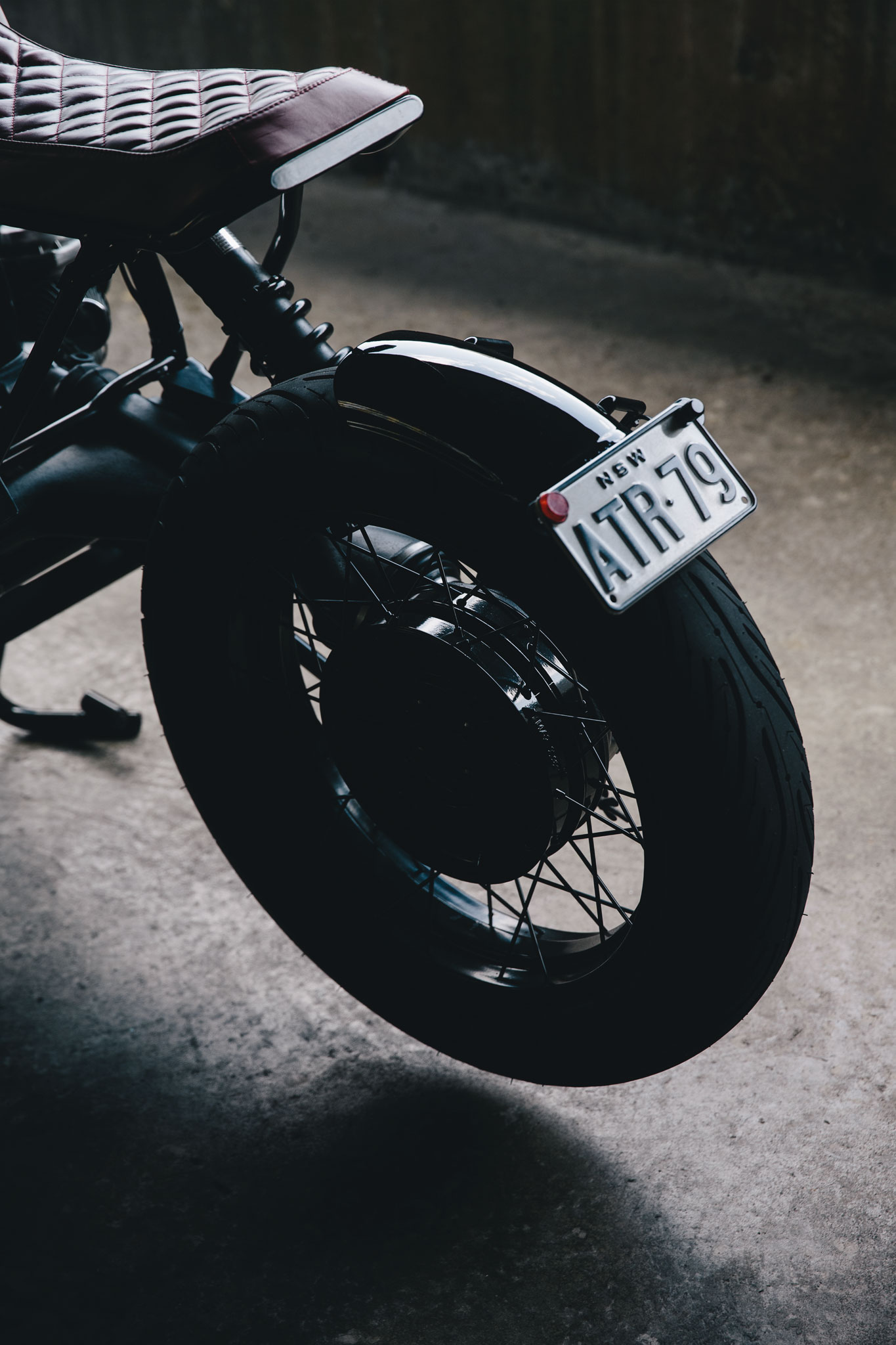 A good mate of Paul’s was in the market for a new project to work on, with the inspiration coming from a custom build he’d seen in Europe. With Nick wanting to try a different styled build to what he typically does, this joint project began to make sense. “Nick had an idea about a bike that he’d seen built by Atelier- although he wanted his to be more daily rider friendly, and so a plan was put together. We began with the search for a base bike, Nick managed to find a great original 1991 BMW R100R way out in West Australia. The owner was a great guy and just so happened to be coming over east in a month’s time and had a van to put the bike in. Call it fate, or a bloody good coincidence – it was paid for and we now waited for delivery.” 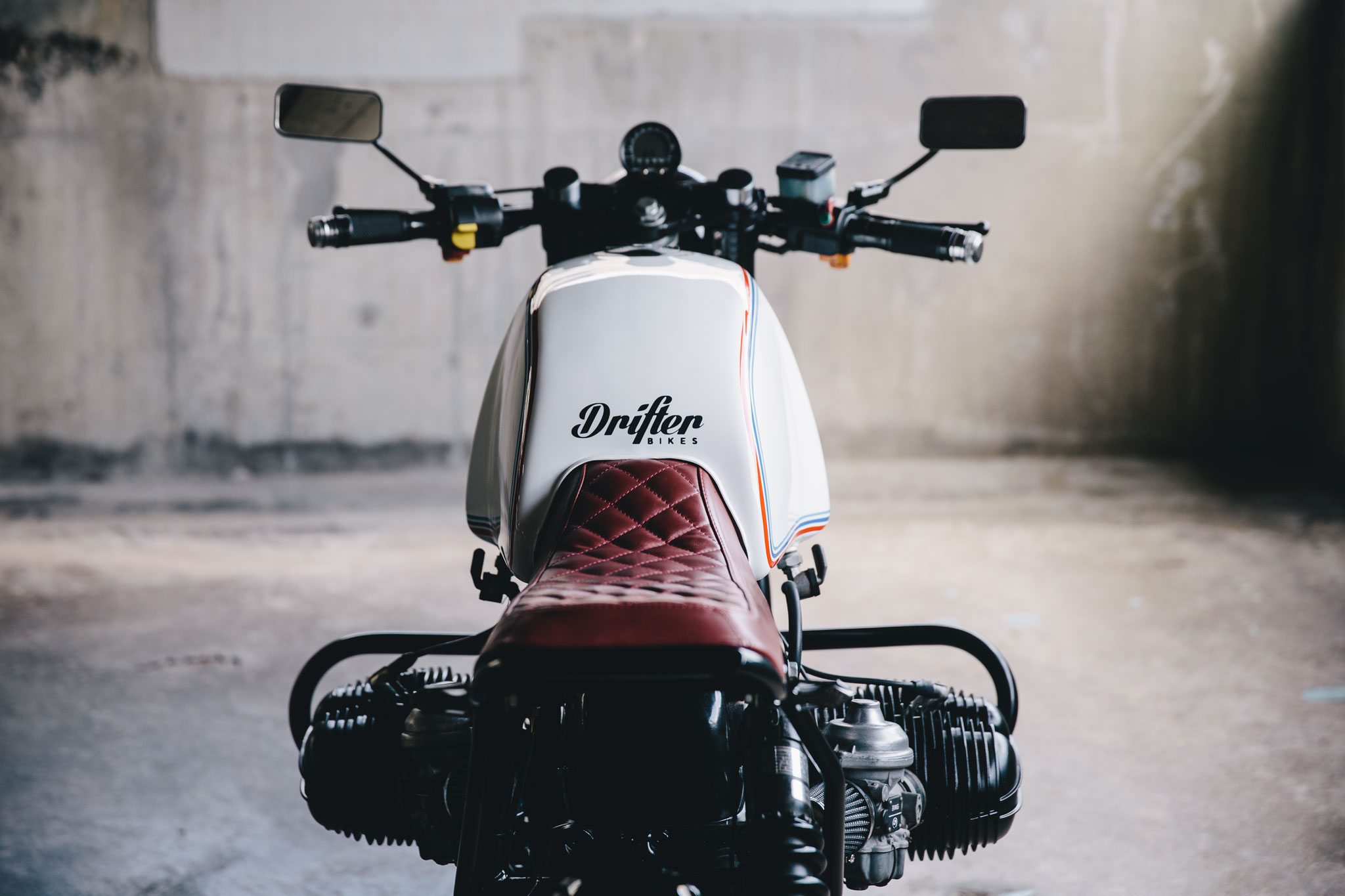 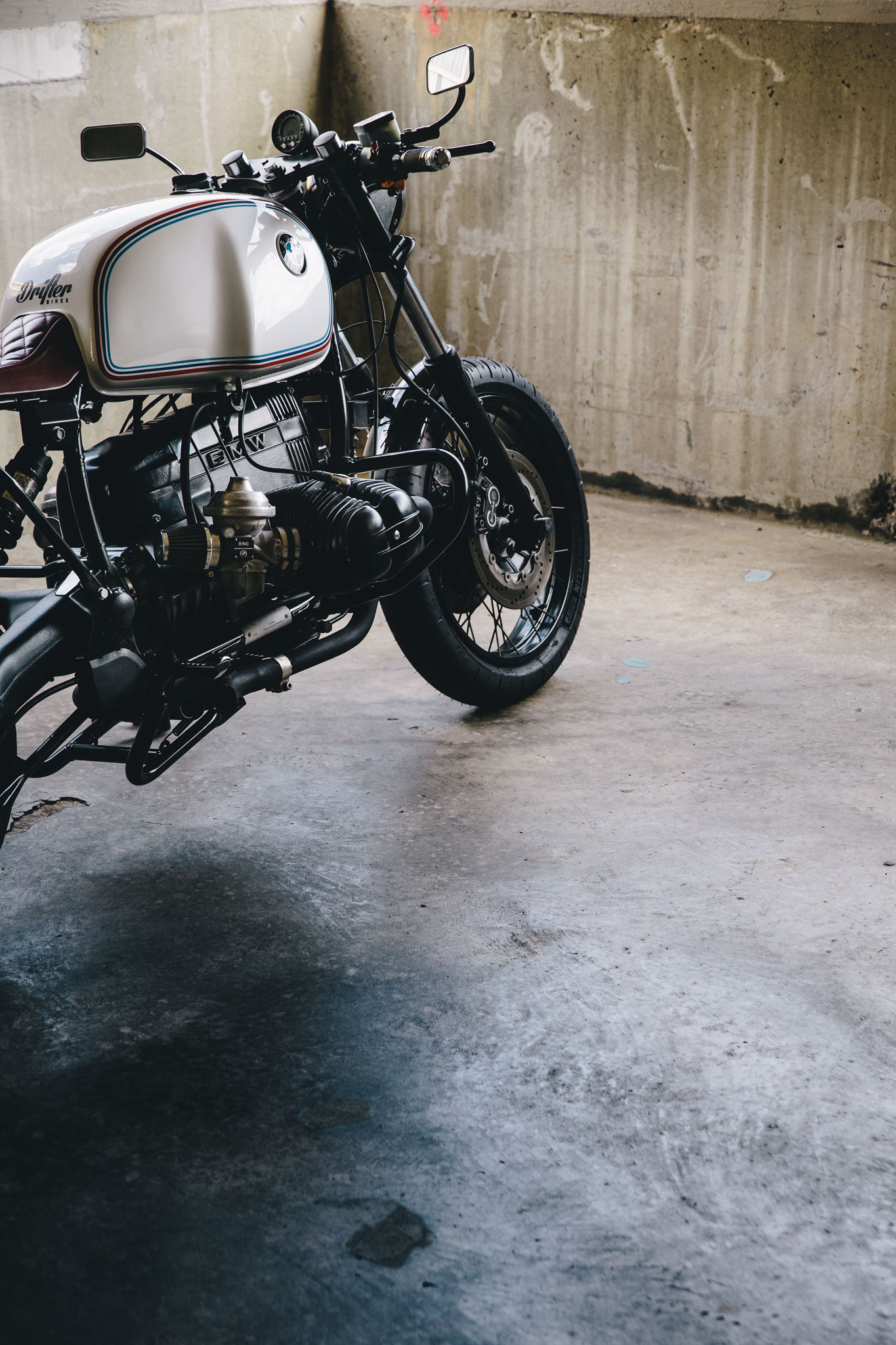 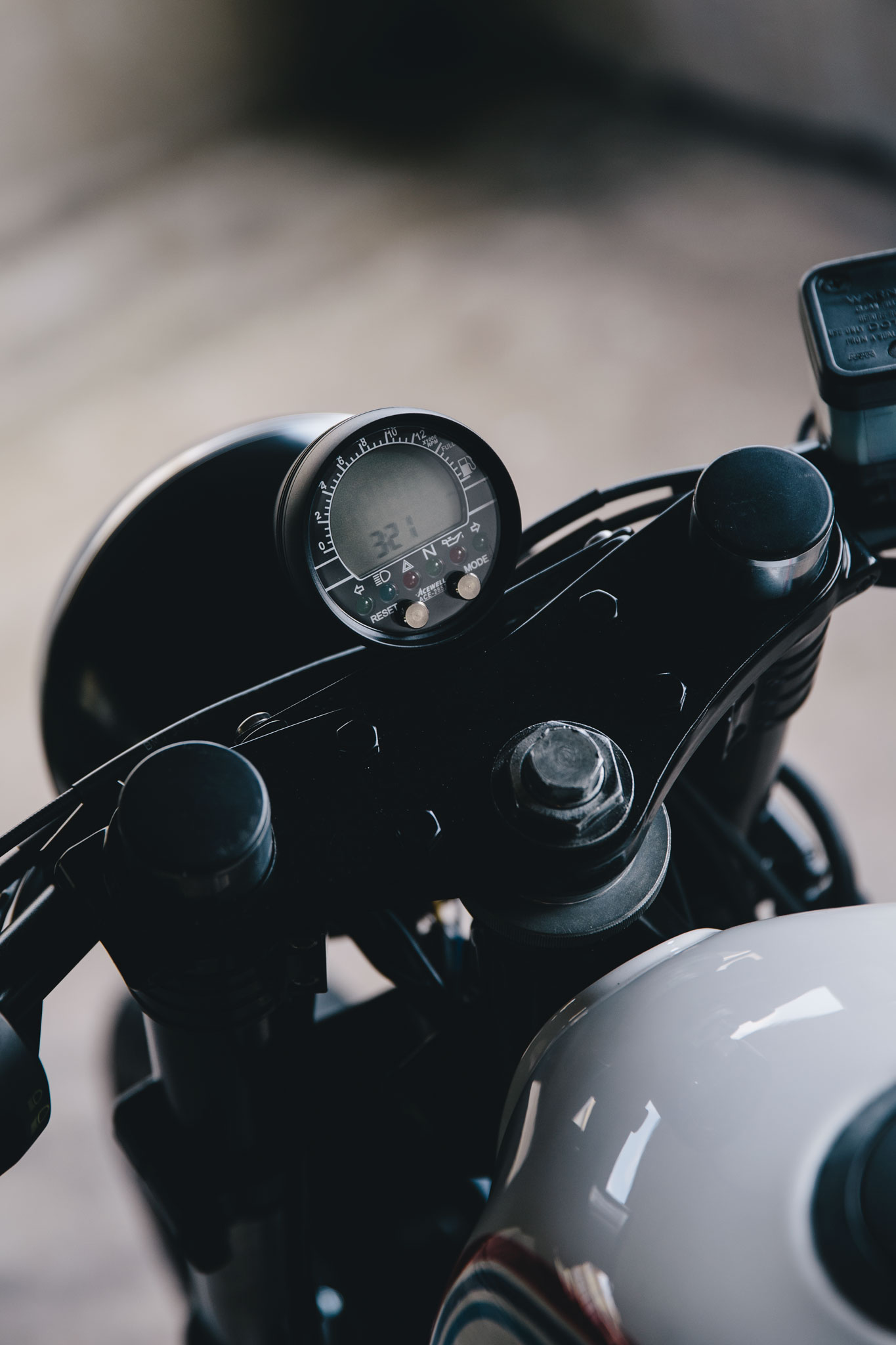 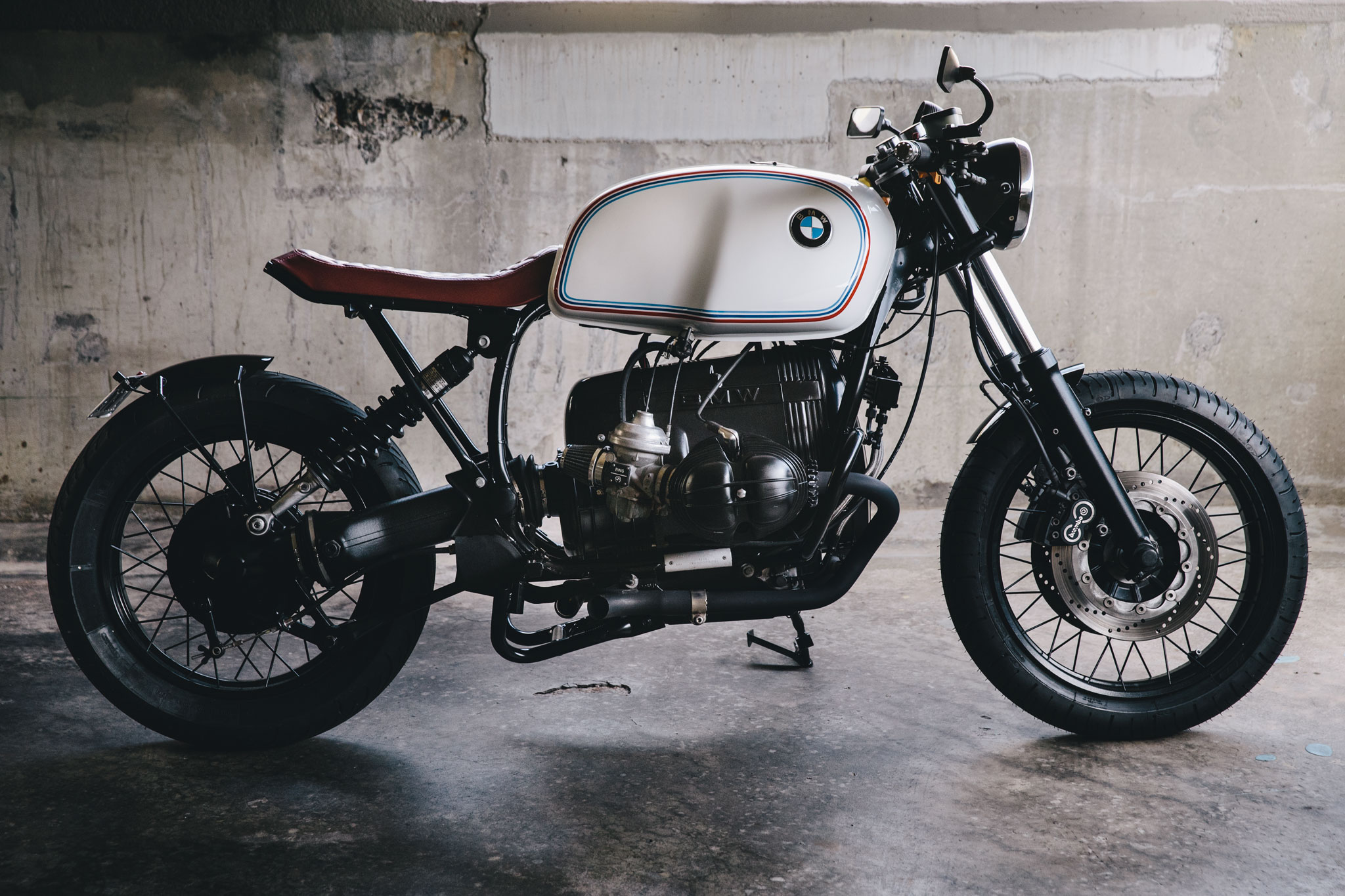 While the wait for the bike was ticking away, Nick and Paul made good use of this spare time to source parts from far and wide to keep the wheels on this build in motion. A tank that was exactly what Nick was after was found, albeit in Poland. Regardless, they bit the bullet and ordered the tank from Poland, with one slight hiccup. “The tank got knocked back by customs due to it not being flushed properly. We had to wait a further 6 weeks for it make its slow boat journey to Australia.” But once it did arrive, the build could commence full steam ahead. 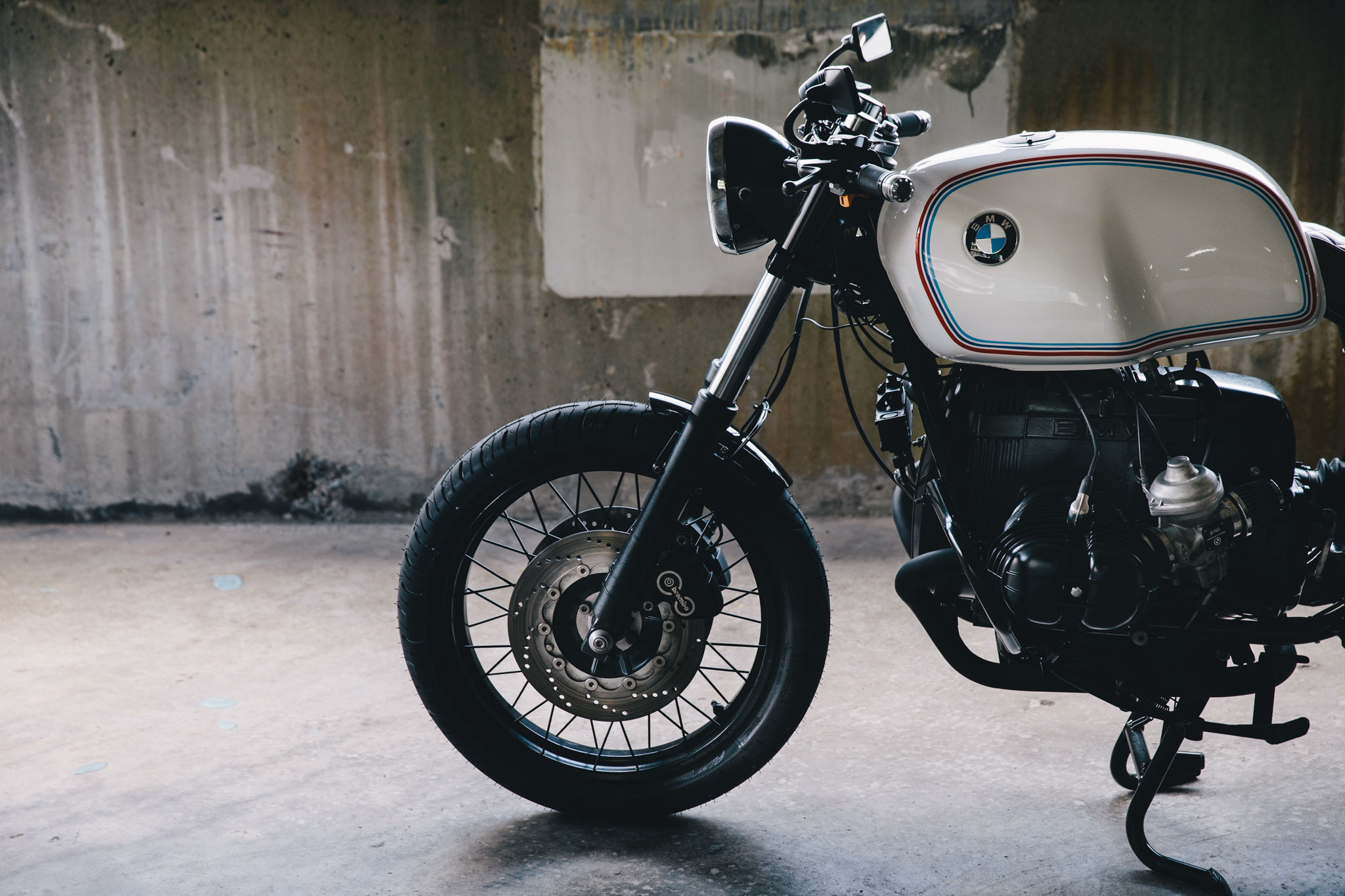 The basic strip down of the bike revealed a very good frame set up, but it would still be modified to bring this design to life. The frame was de-tabbed and shortened with a kick in the rear for tyre clearance. The seat was laid over 2mm alloy sheet and foamed with closed cell rubber. “It’s easy to shape, and not too bad on your butt for longer rides. It was sent off to Michael from East Coast Trim Shop to have some beautiful leather in ox blood red. His stitches are millimetre perfect, and the finish is awesome.” 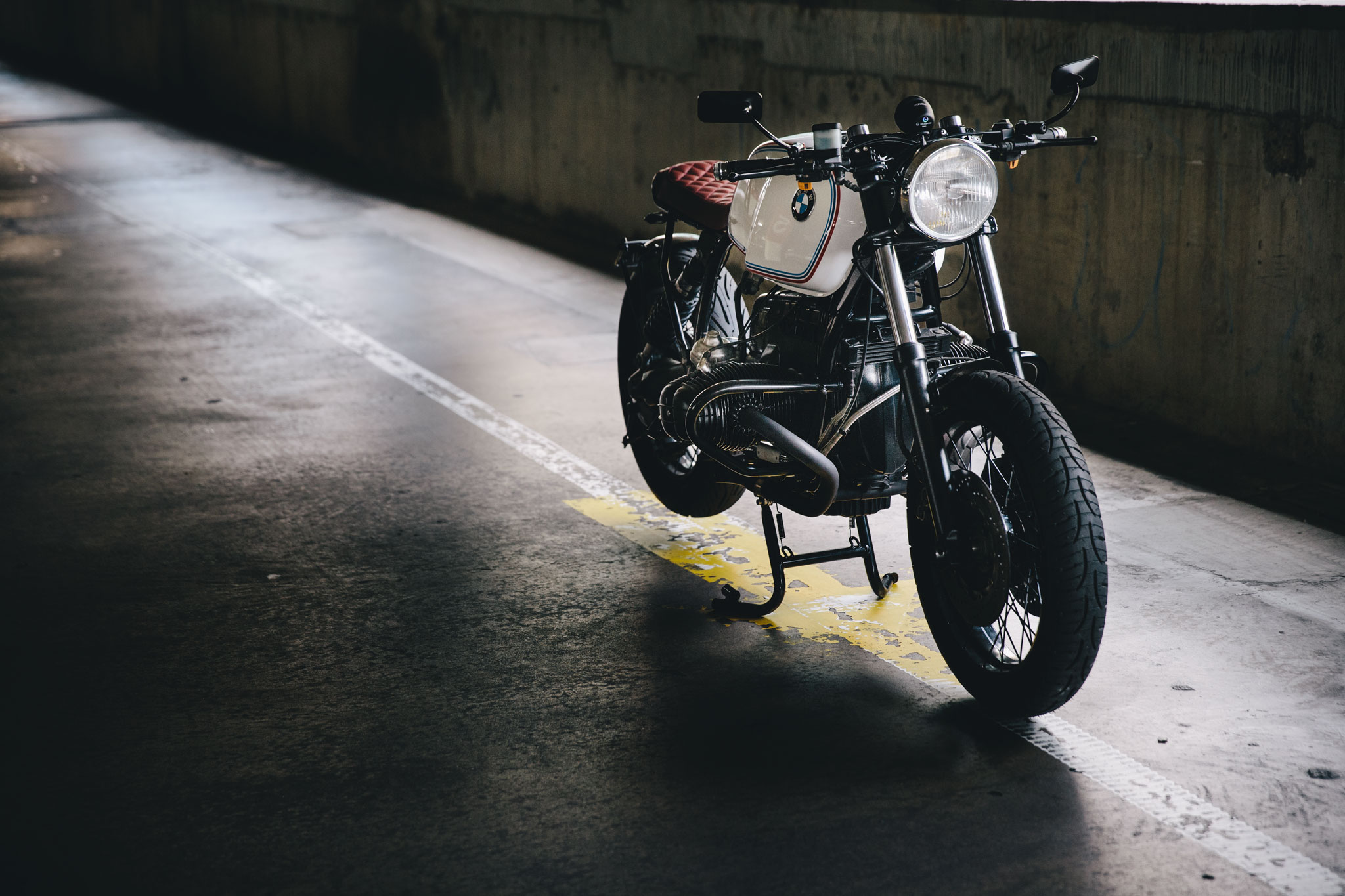 Now that the throne was complete, attention could be cast back to this troublesome tank. It would be sent off to have the magic of Kyle from Smith Concepts worked across it. “A simple but classic design was the plan to replicate the M colours from BMW. The actual process is never that easy. A whole lot of masking, then back masking had the tank looking amazing with an understated simplicity.  After the majority of the fab work was done, the bike was fully stripped and blasted and given a new coat of satin black powdercoat with the motor being given the same treatment to tie it all together.” 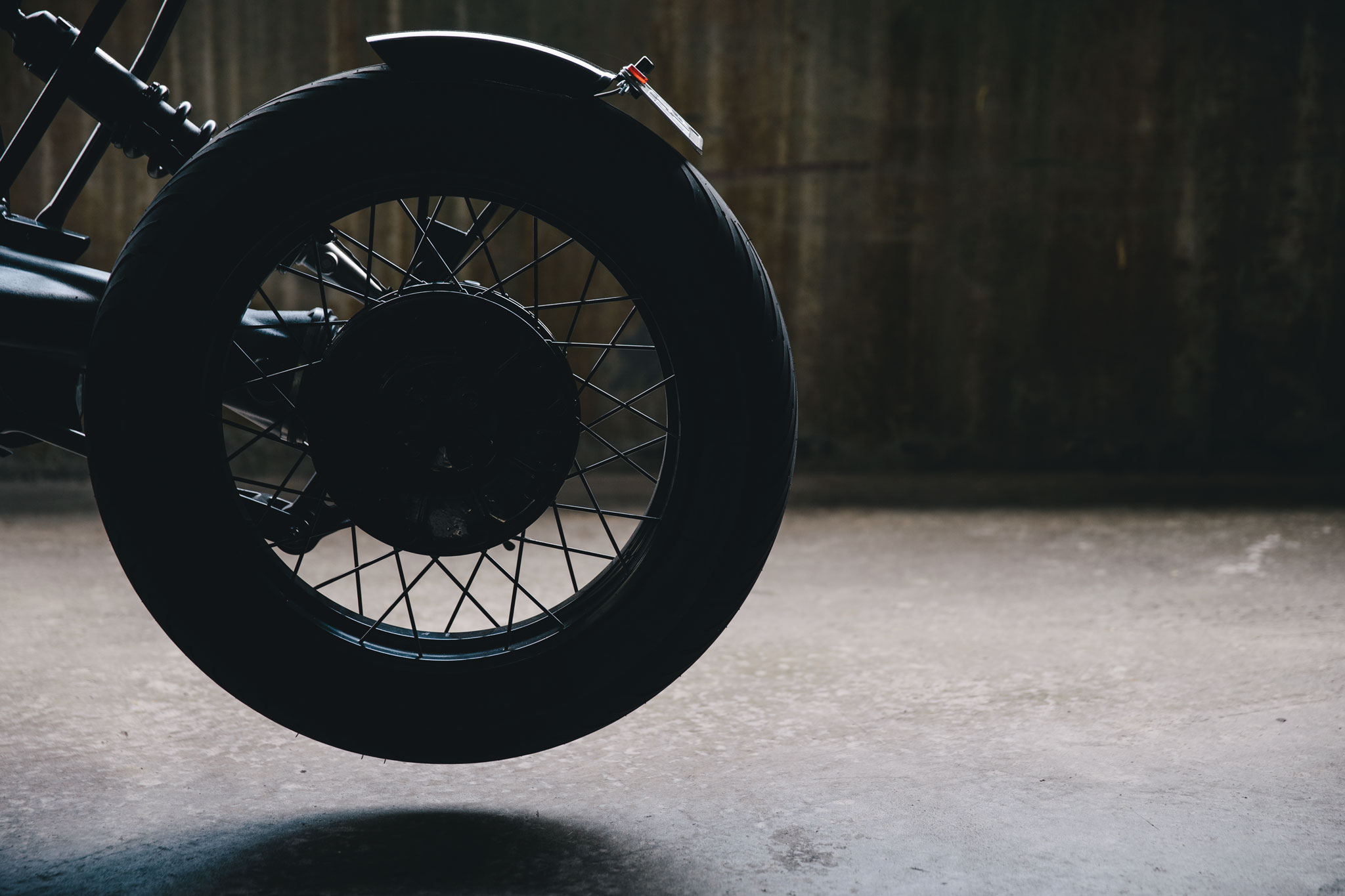 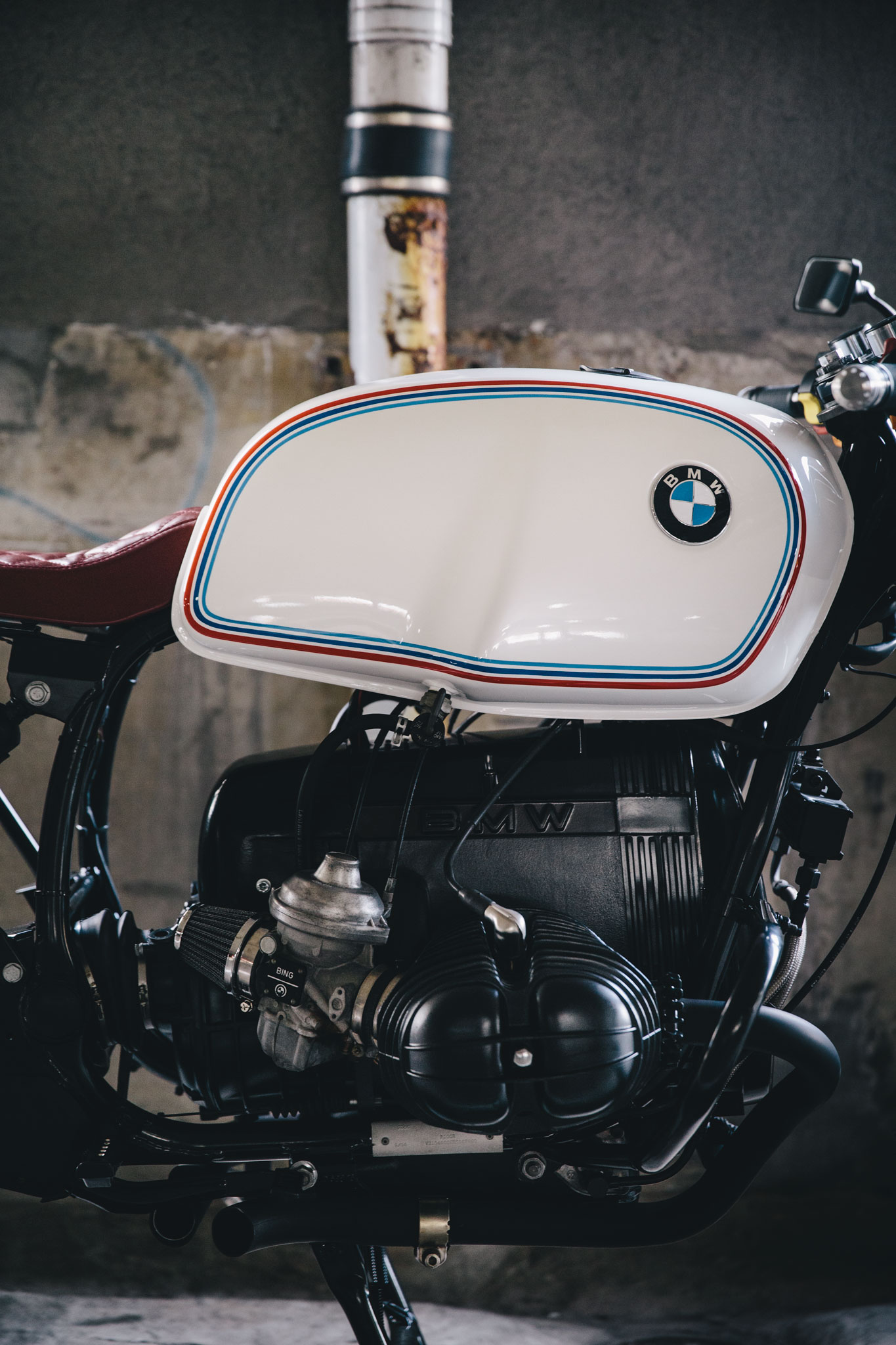 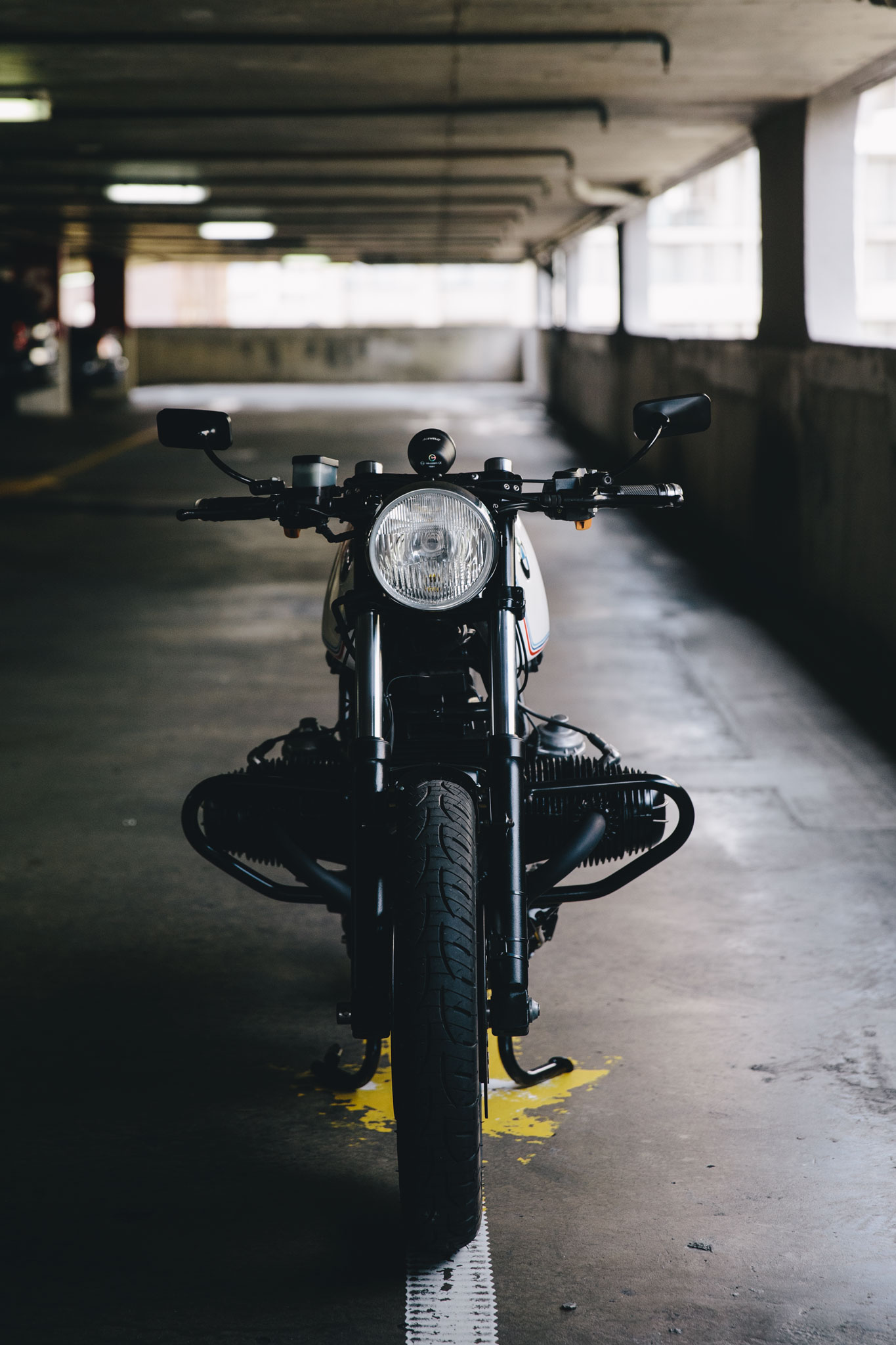 “In Australia, and particular NSW – the police tend to like to see some wheel coverage for tyres front and rear. The bike being a single sided swing arm, it had me working hard to make something strong enough to hold the fender without overpowering the look of the bike. I think it works well, and looks light enough to not take away from the bike. Integrated rear indicators blend the tail/stop light duties nicely. The front indicators are bar end style much like the Motogadget setup. There is a whole lot of detail in the bike that you have to look for. Tonnes of hours in the small things make the builds seems like marathons. Hiding wires and finishing off things is time consuming but well worth it for the overall look.” 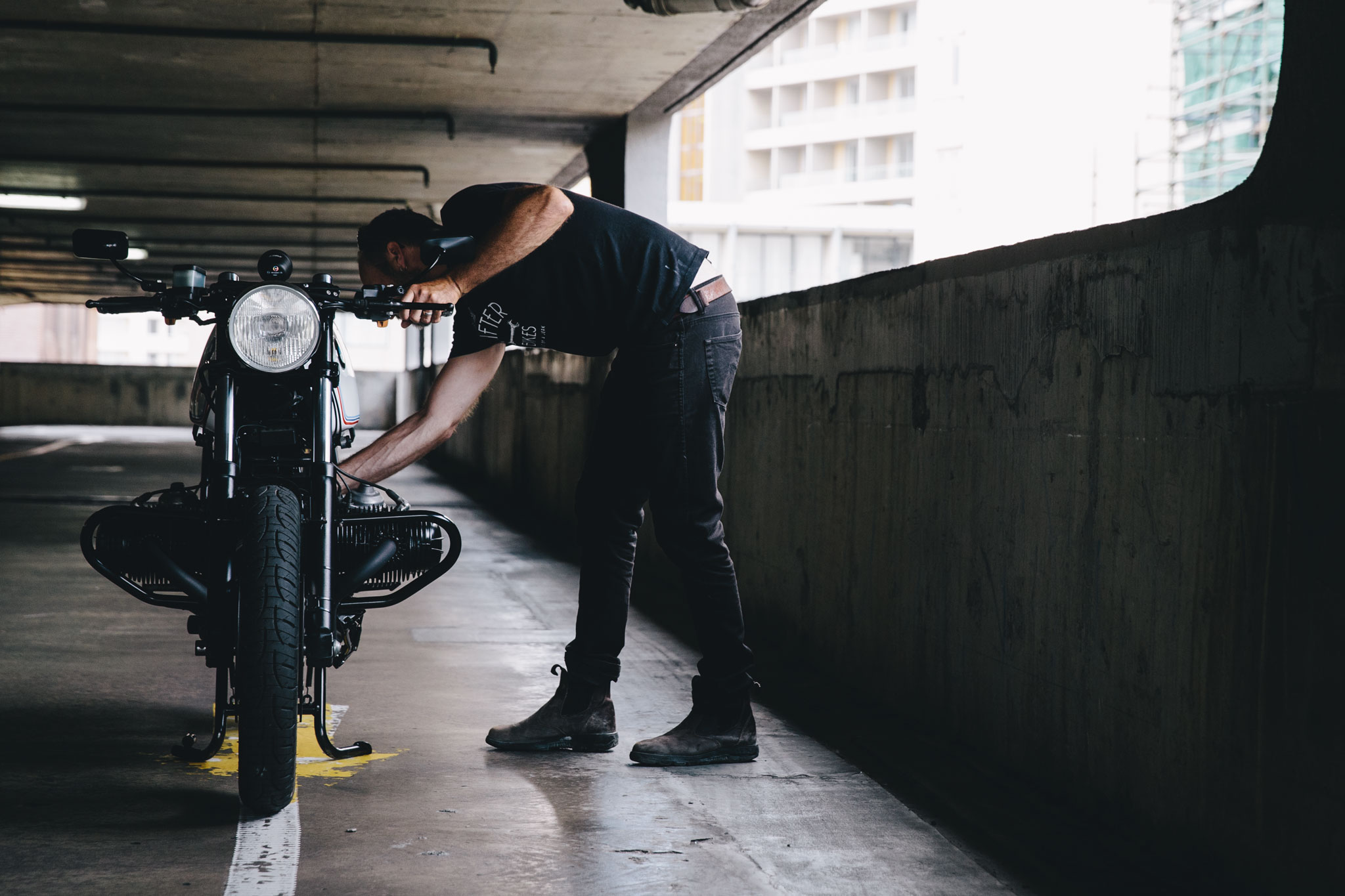 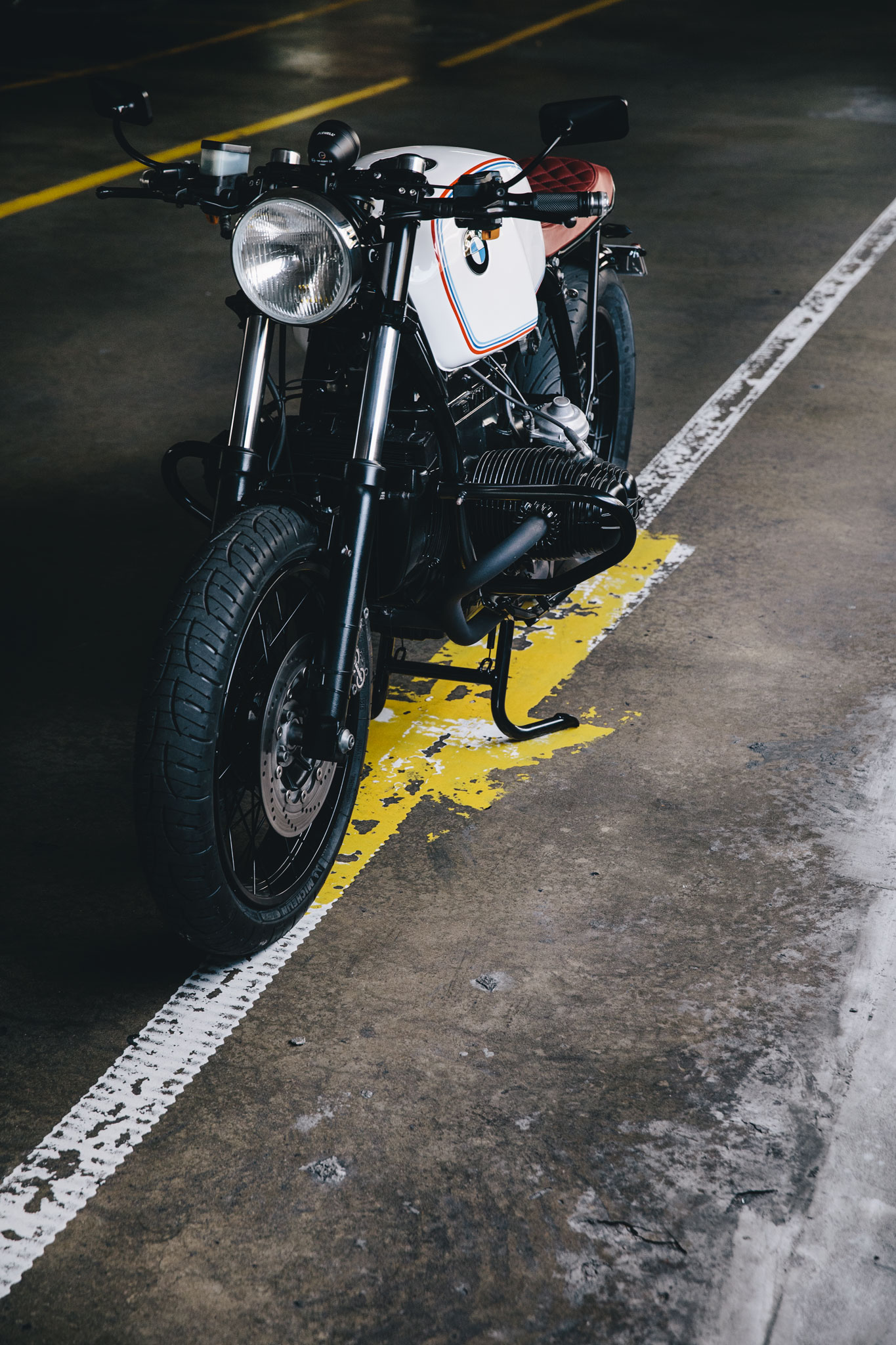 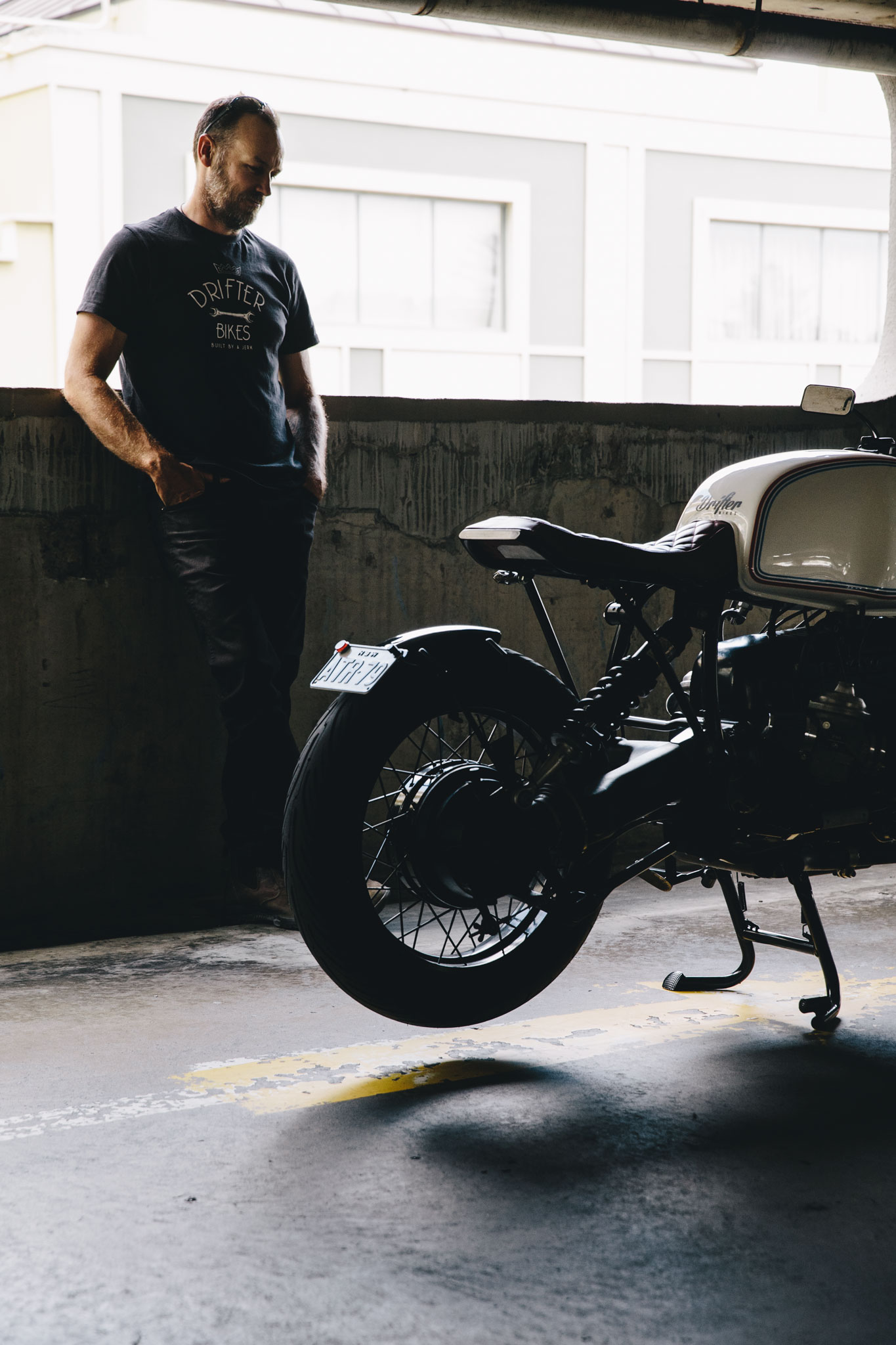 “For the most part the build went fairly smoothly, but BMW’s have a way of resisting being easily customised. They are an engineered bike, and as such they like being put back together a particular way. I found that out on a previous build I did on a 75/6 a few years ago. They’re great long-term ownership bikes as they are built to go forever. Being easy to ride with a unique character see’s many of these bikes being built by lots of custom shops.” 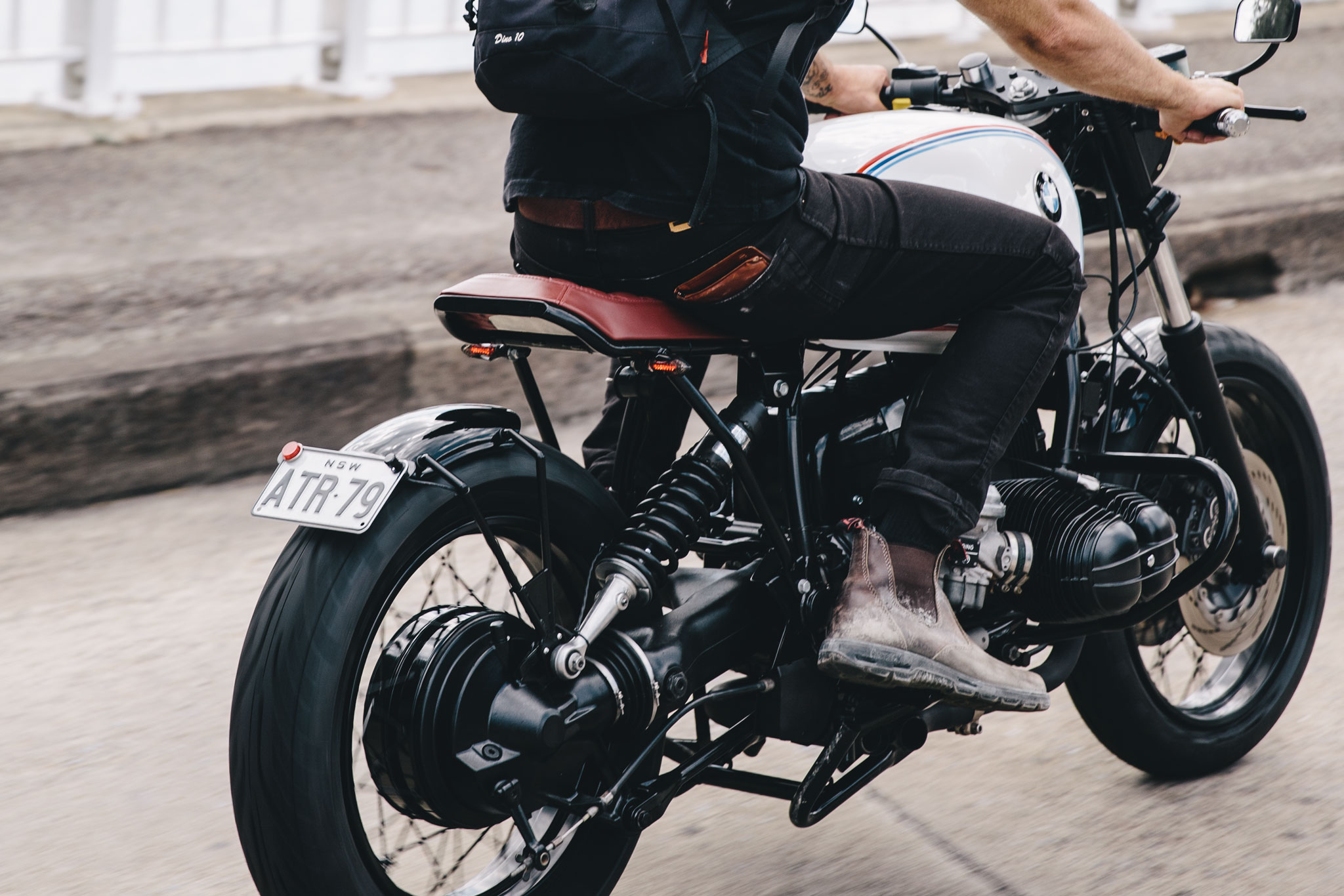 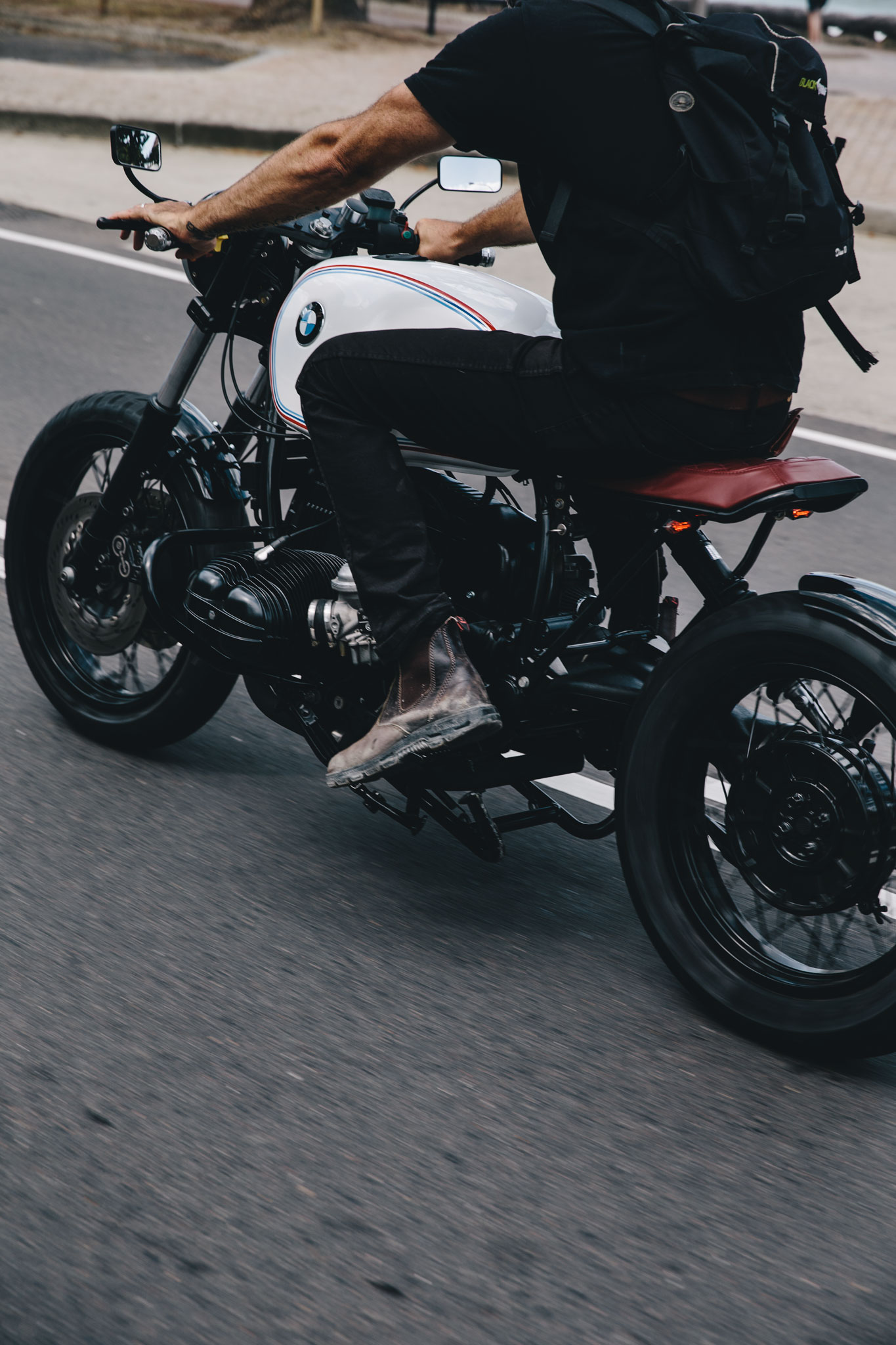 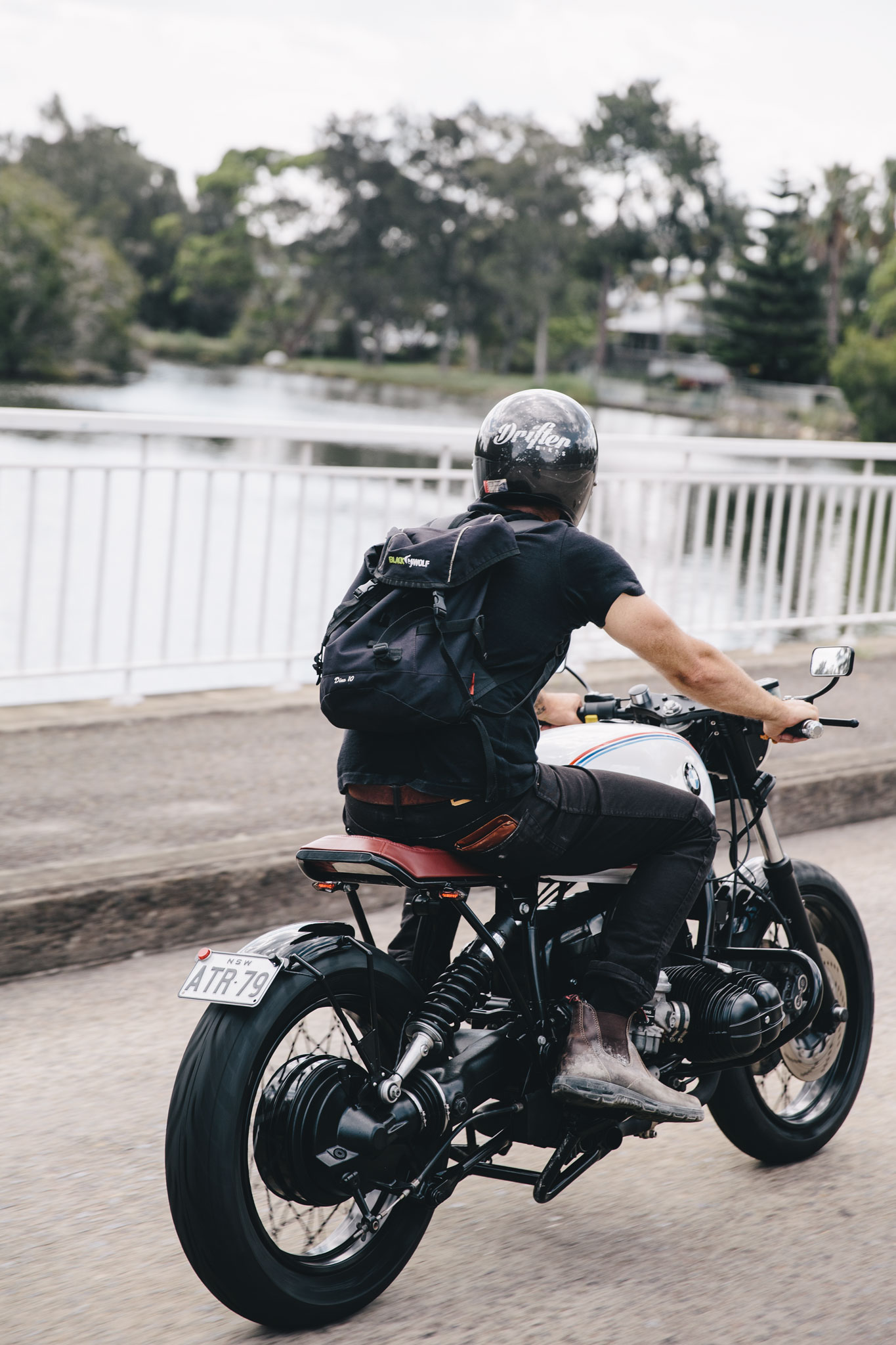 “The bike for Nick and I has been a fun project to work on together. From the design process to the actual building of the bike for us has been a labour of love/hate. It’s tested us in terms of resolving the problems that presented themselves as challenges that took away from our original ideas. Making things work in the real world is an interesting thing when it’s only existed in your mind up until that point. Form and function have to work together when building a bike. I think we have a bike that fits those purposes well.” 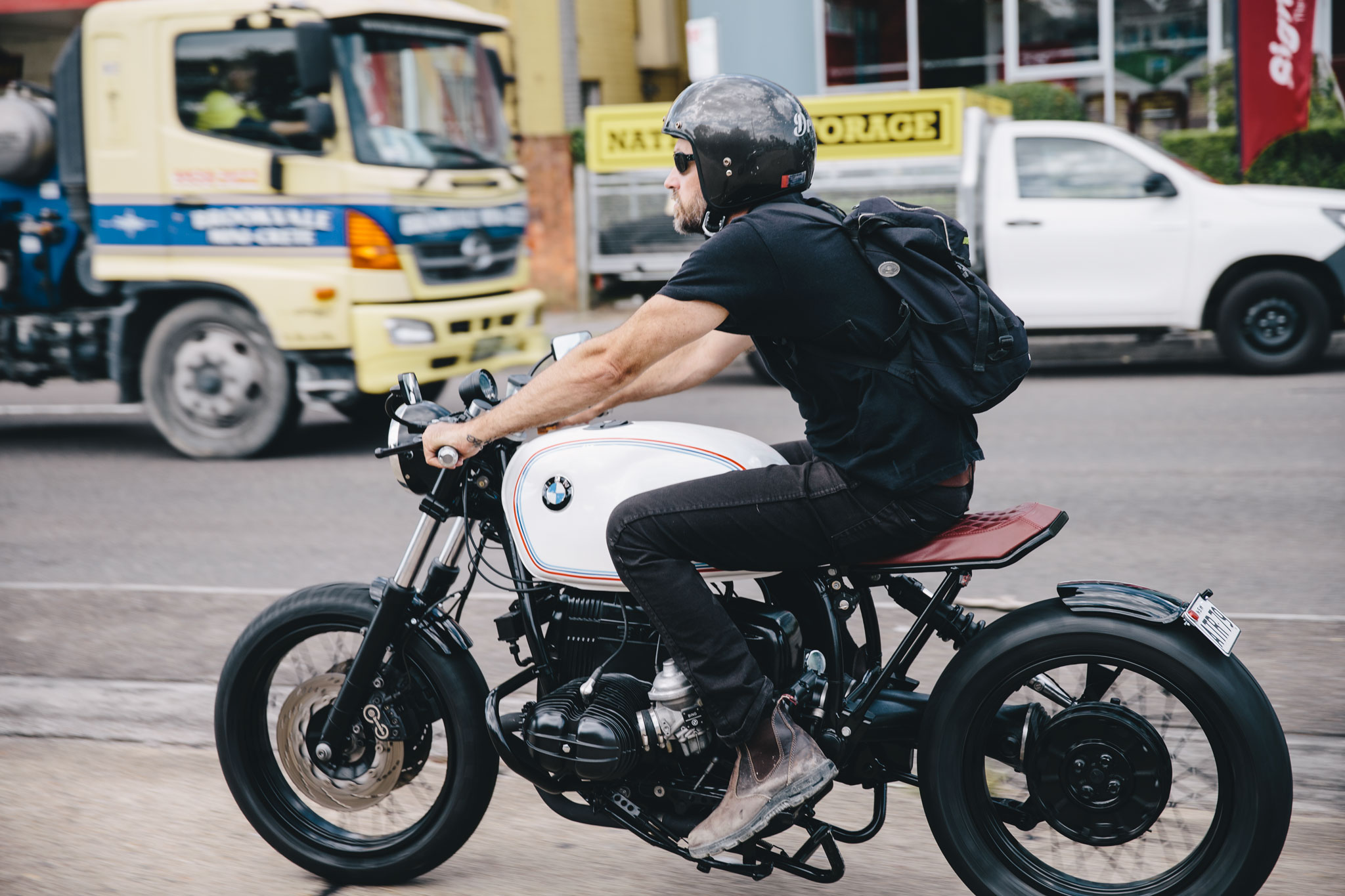